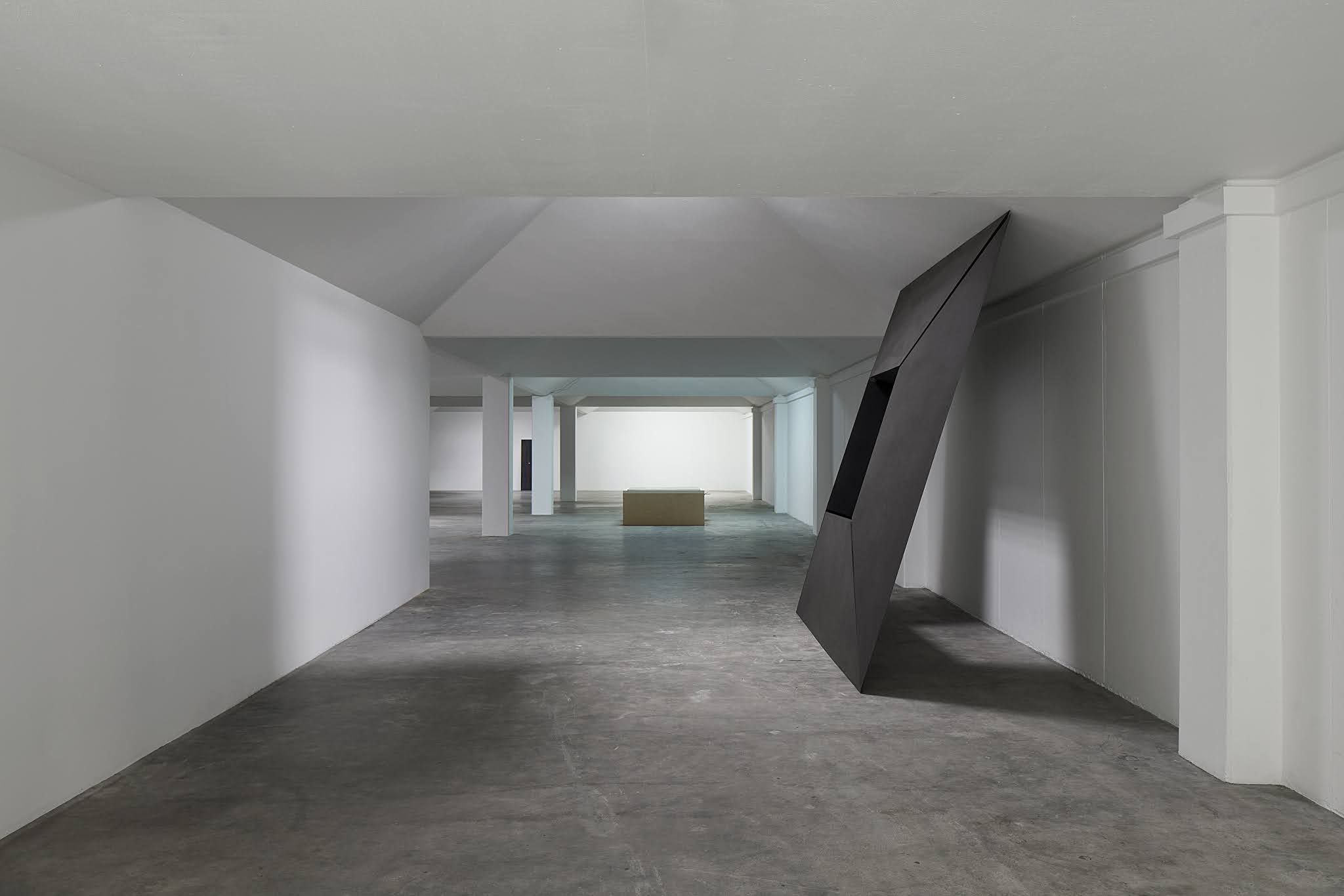 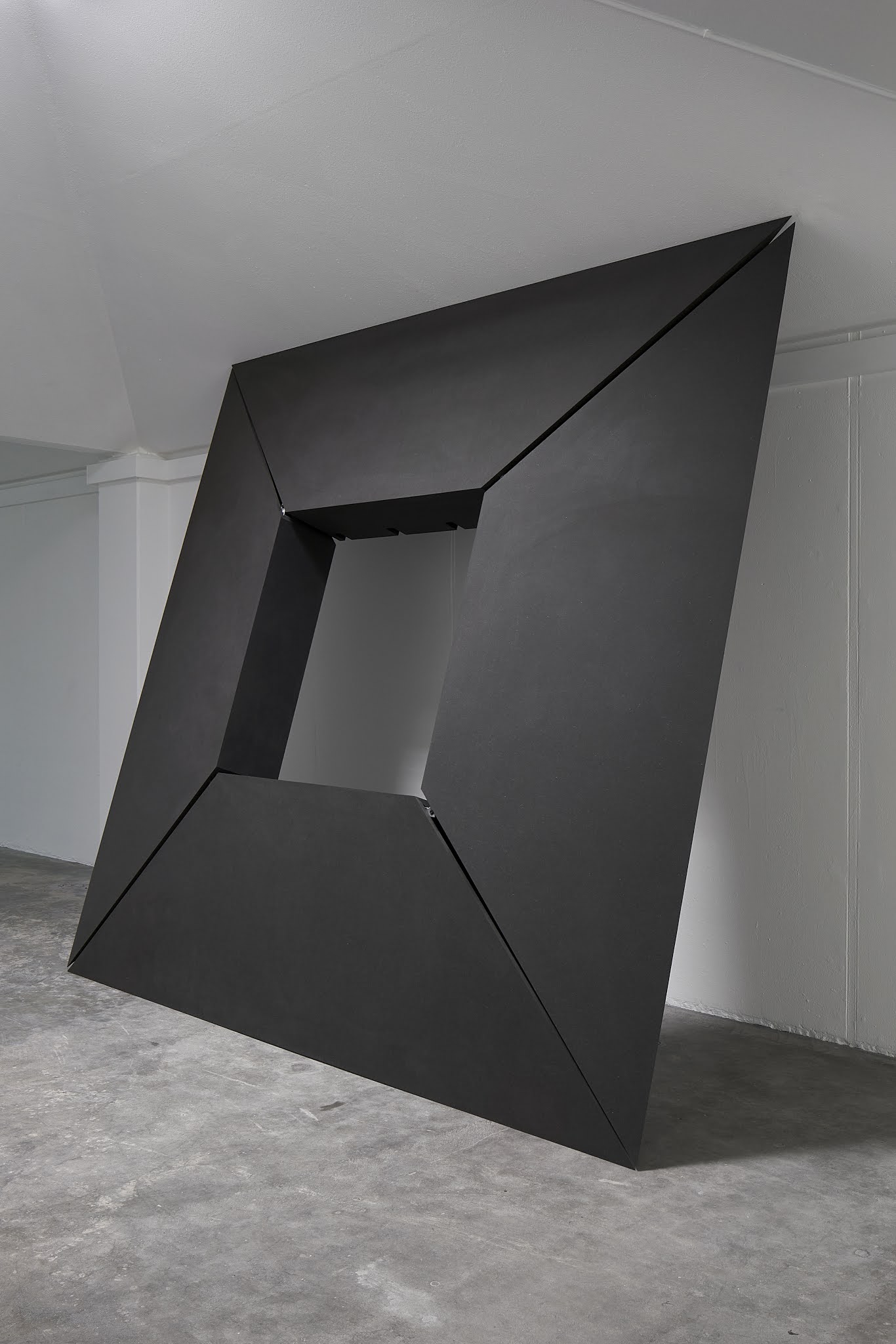 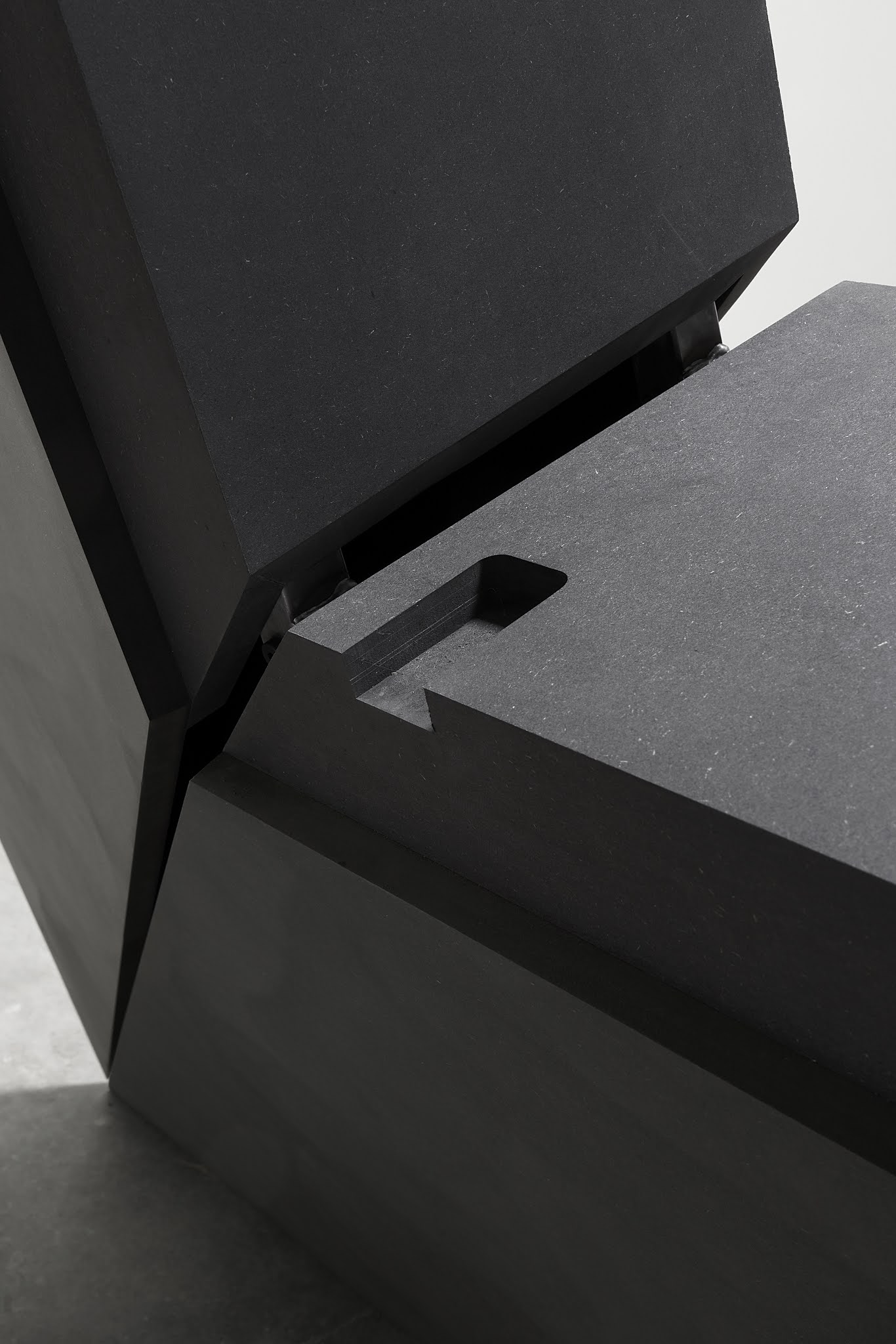 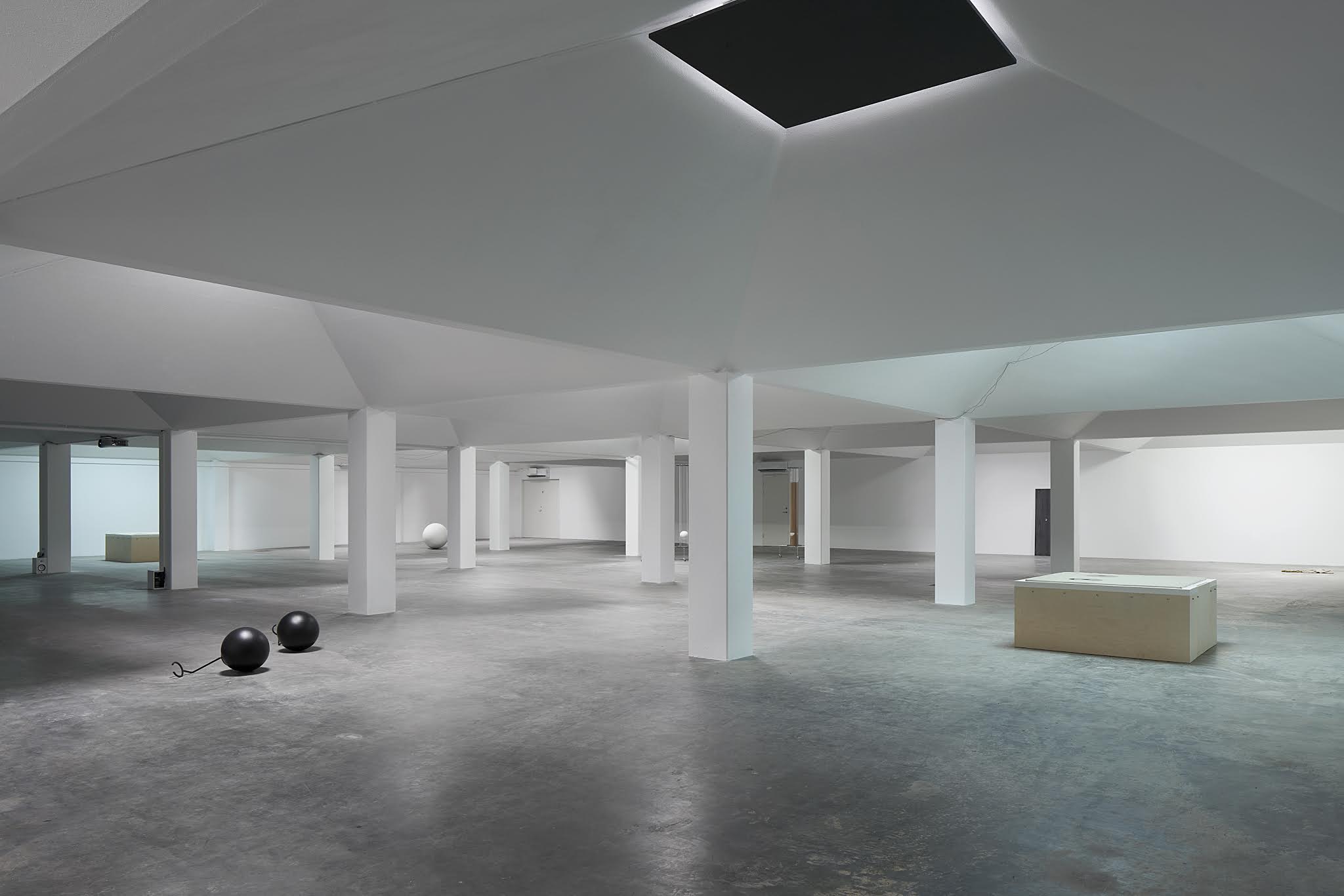 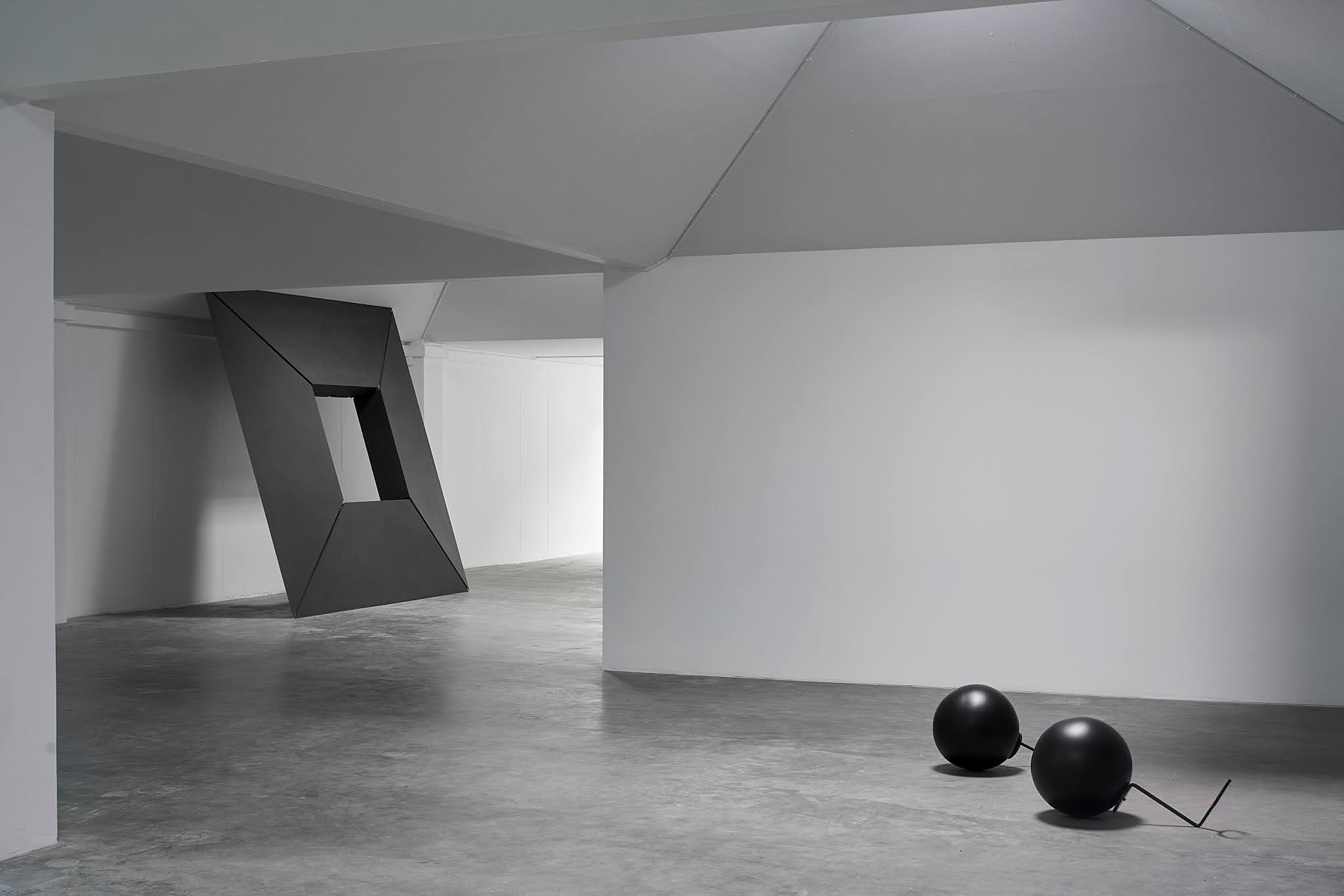 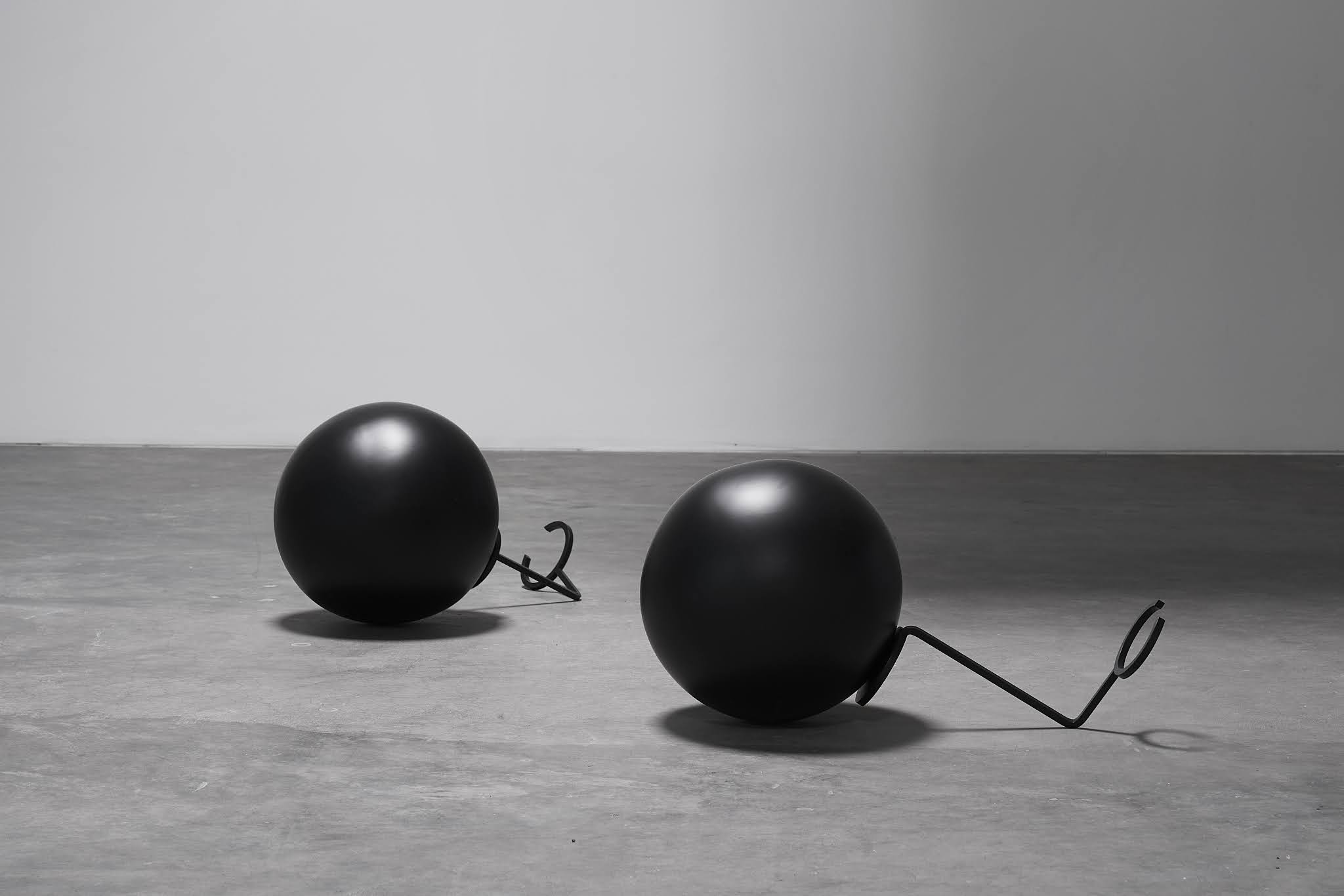 Instruction / for use. The object is hollow and its upthrust force can carry and keep a human being fixed under  water. The frame is attached to the neck and the object, floating in water, will carry the human being below, dead  or alive, 2019, dia 70 cm, porcelain, stainless steel, lacquer 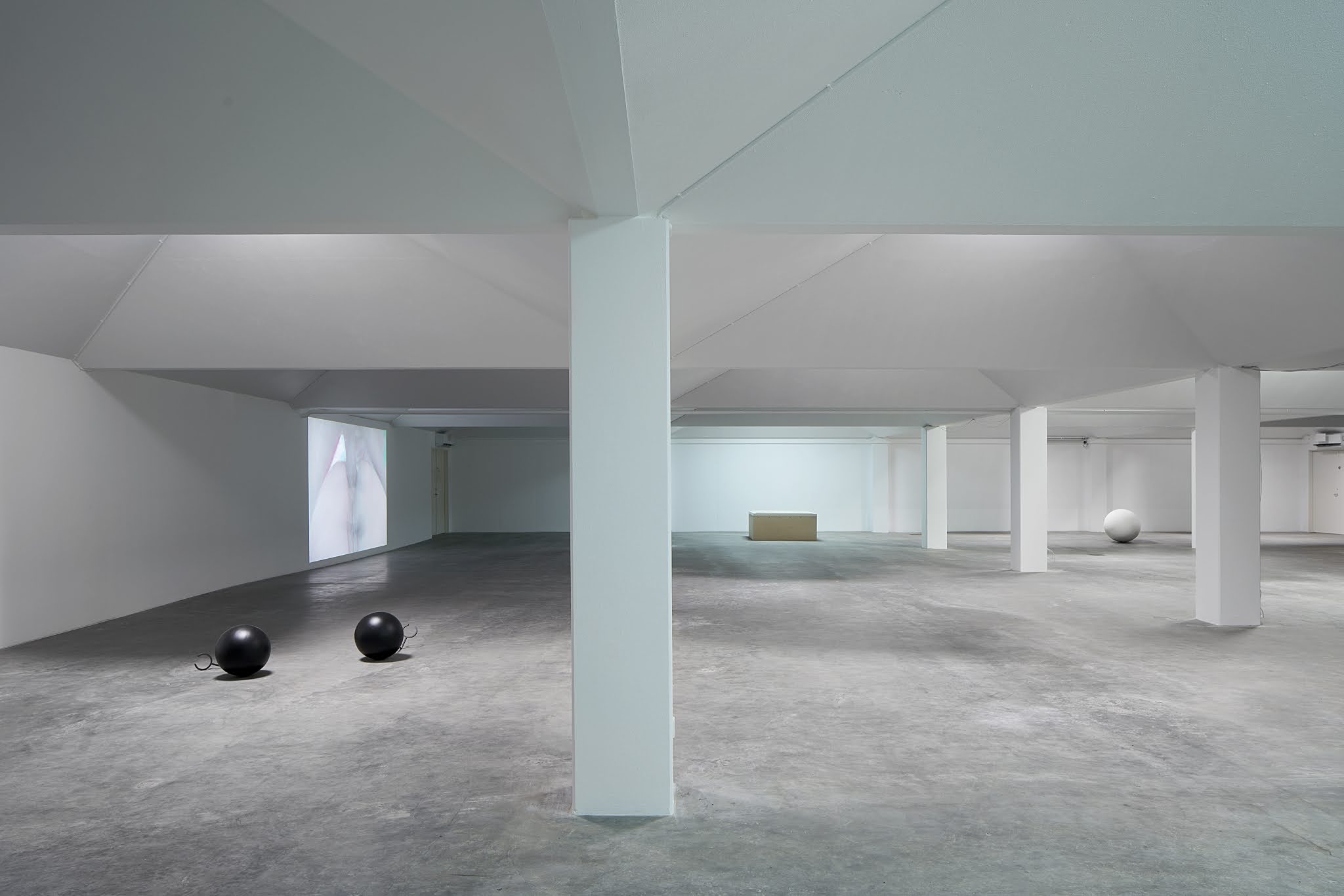 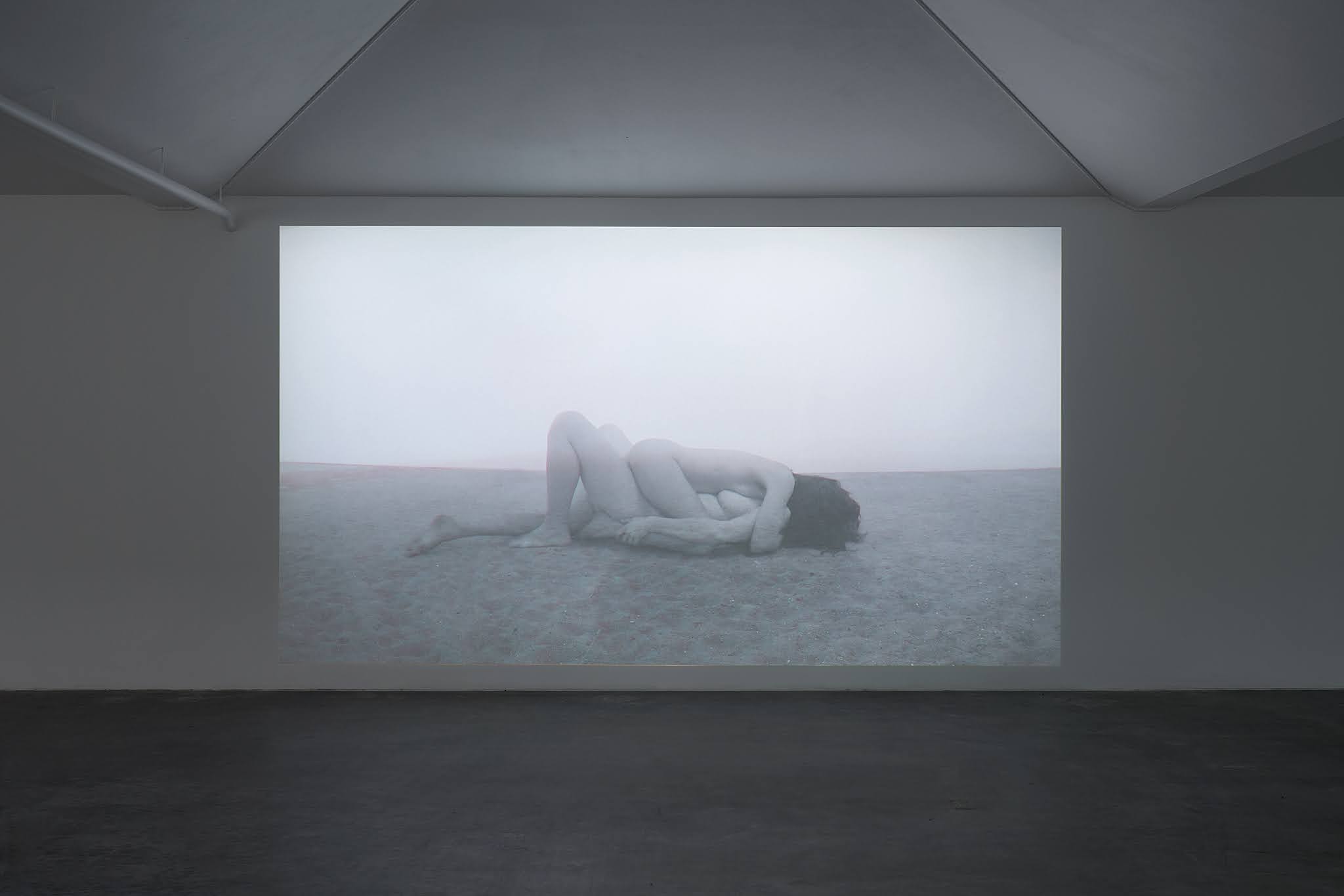 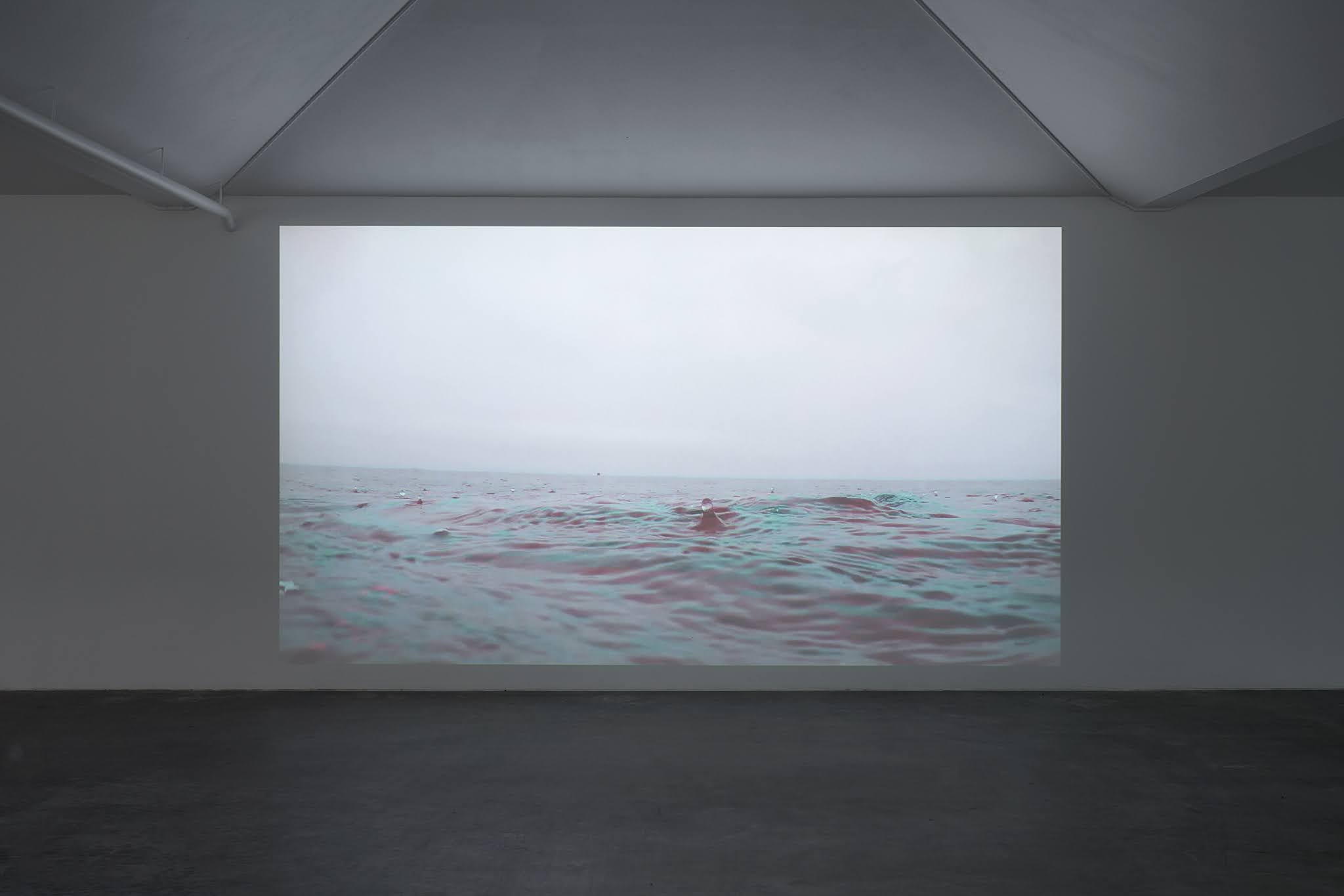 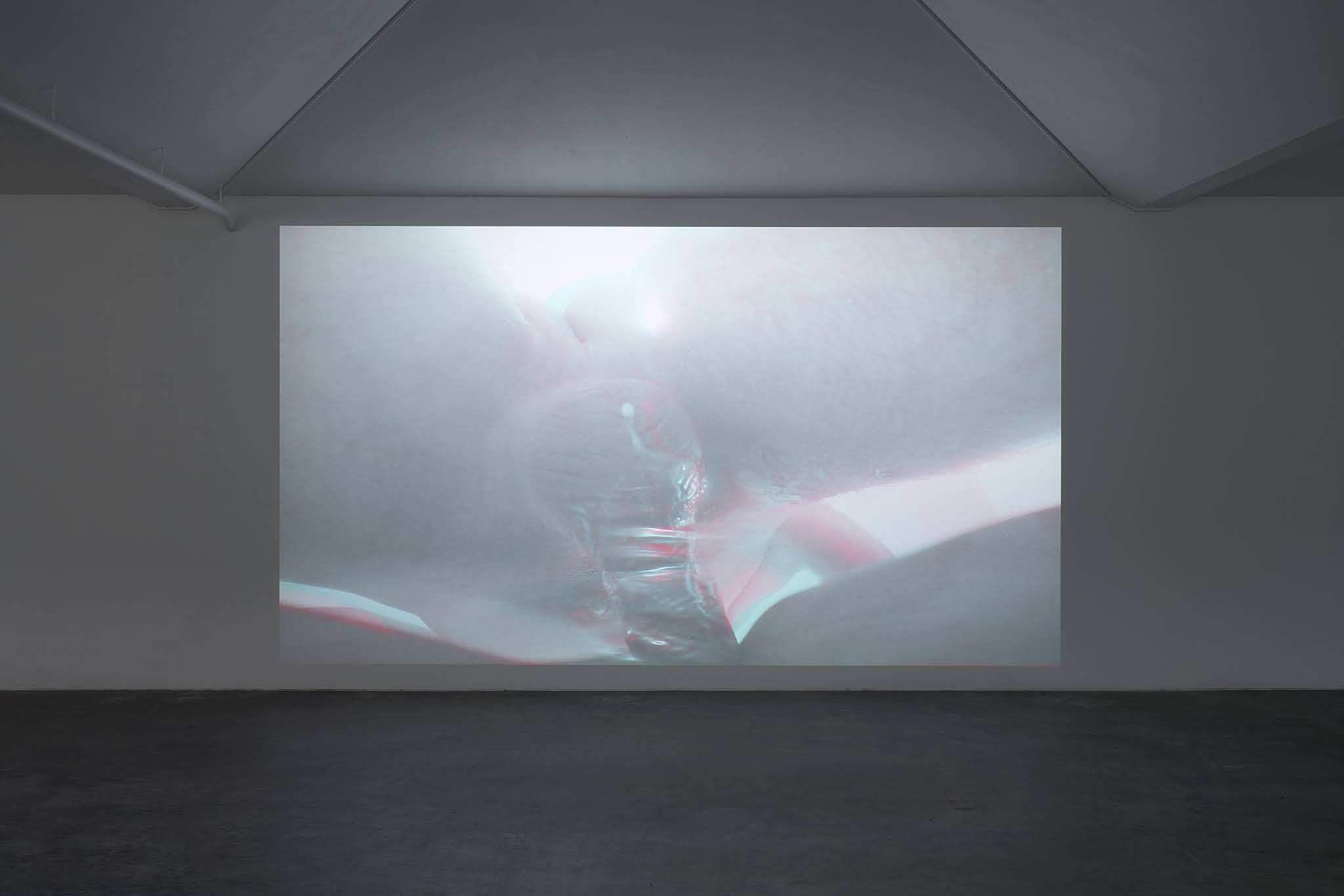 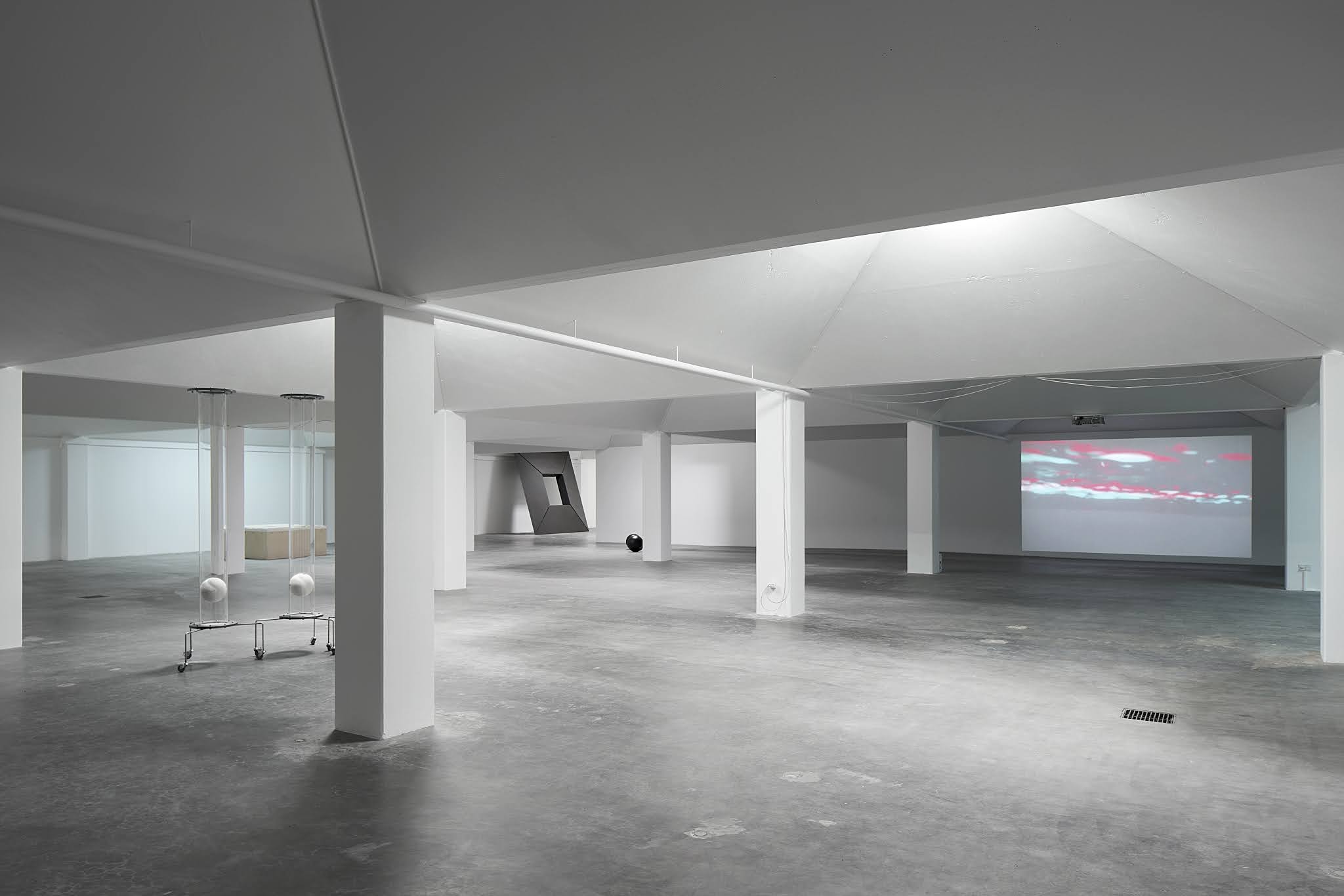 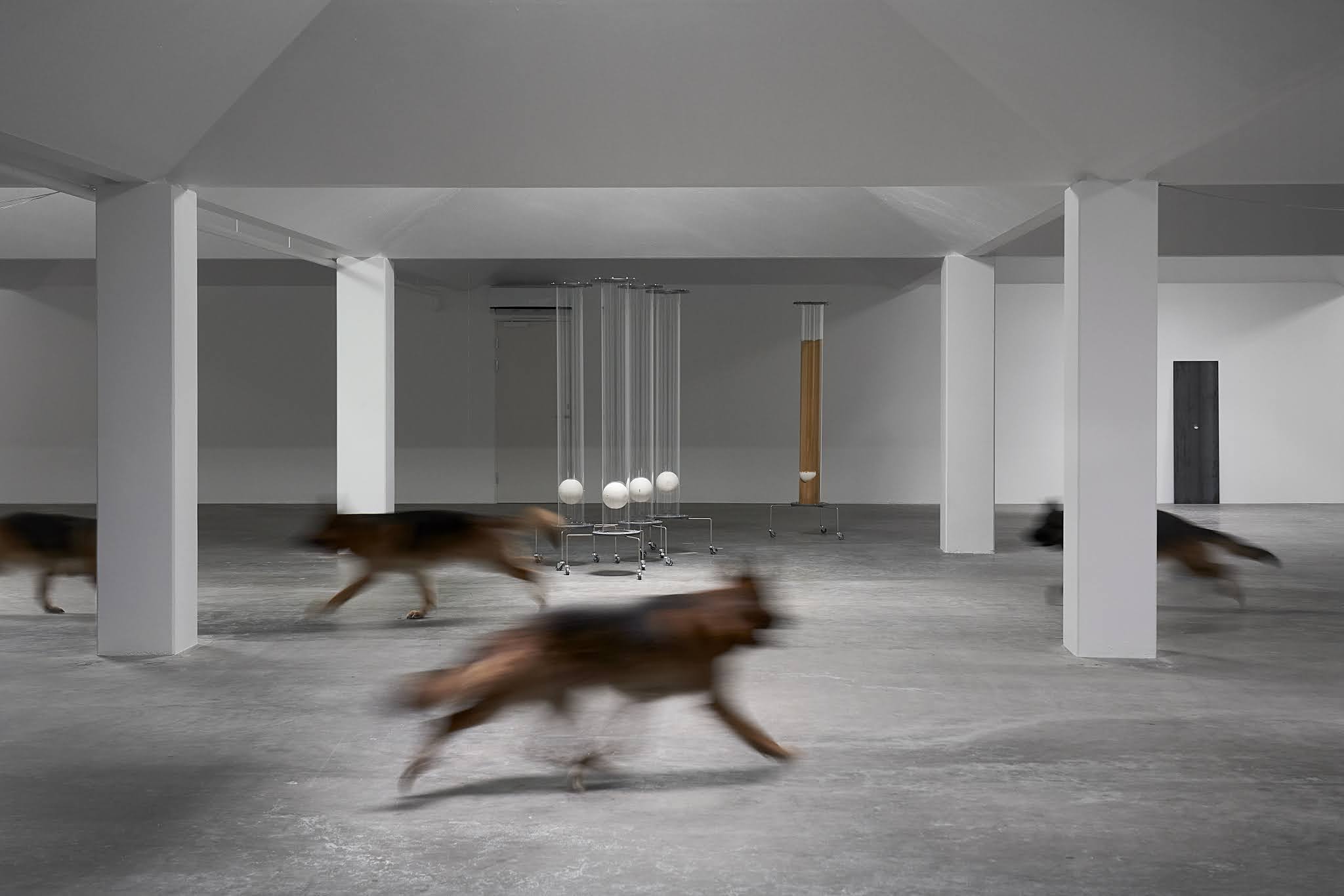 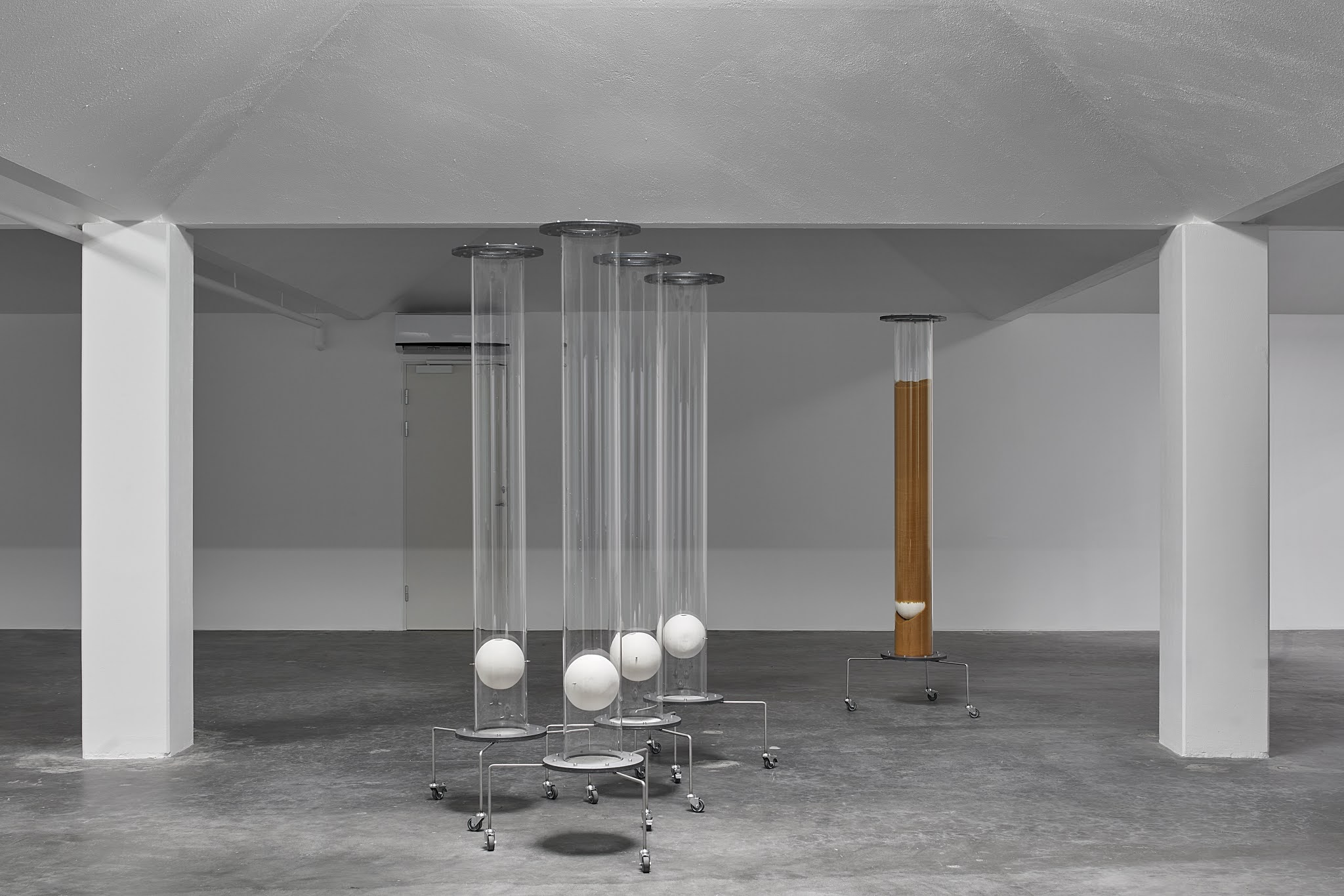 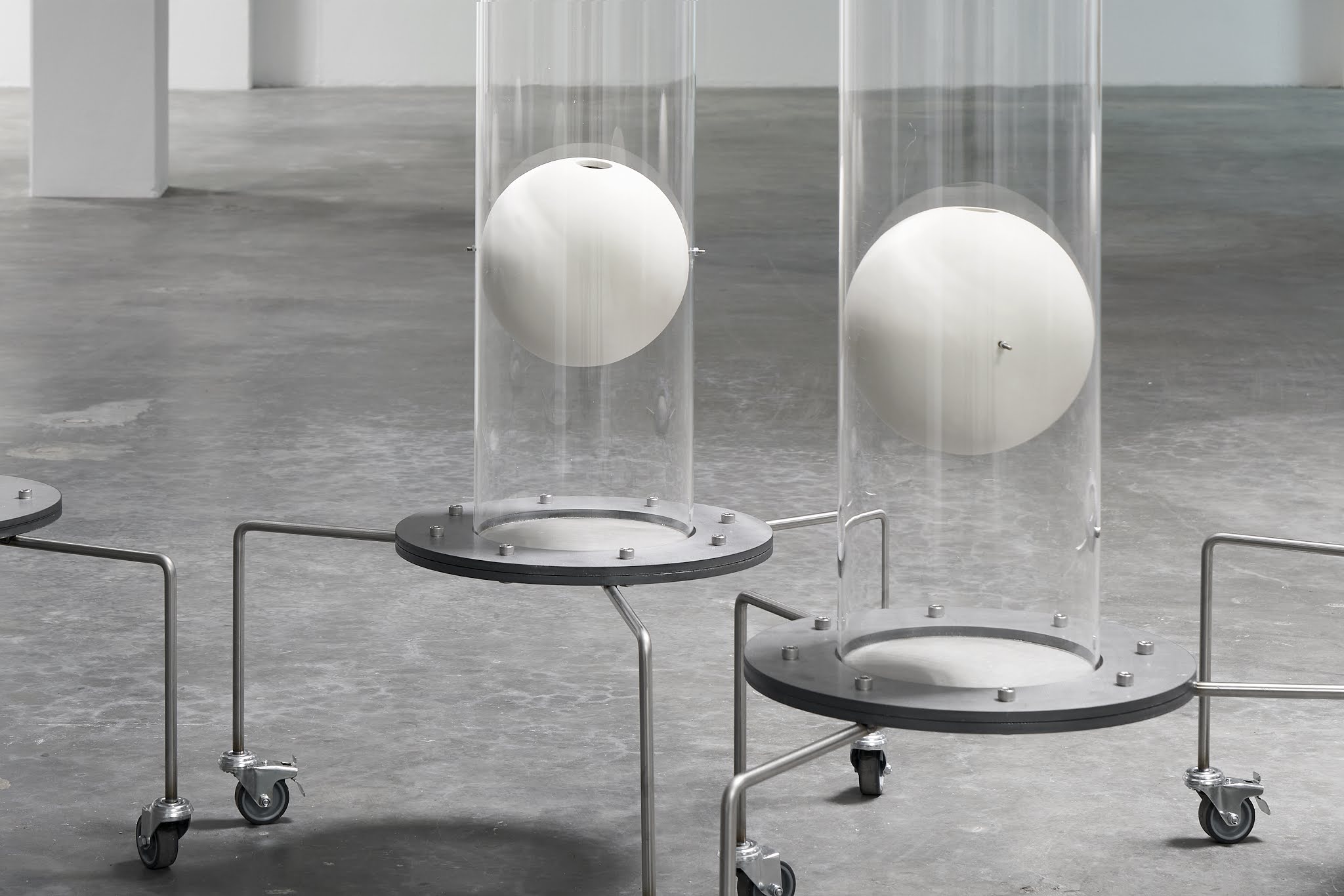 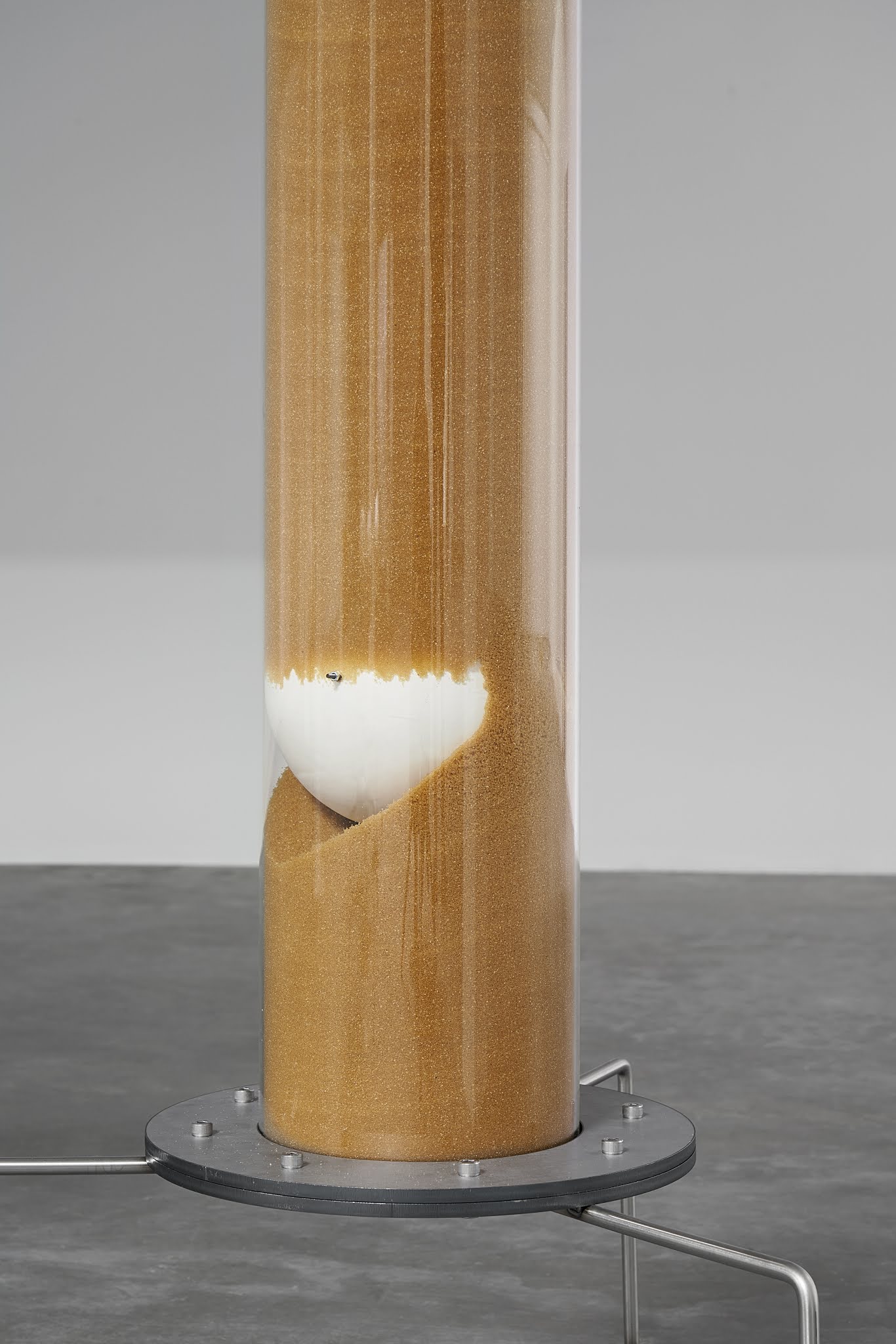 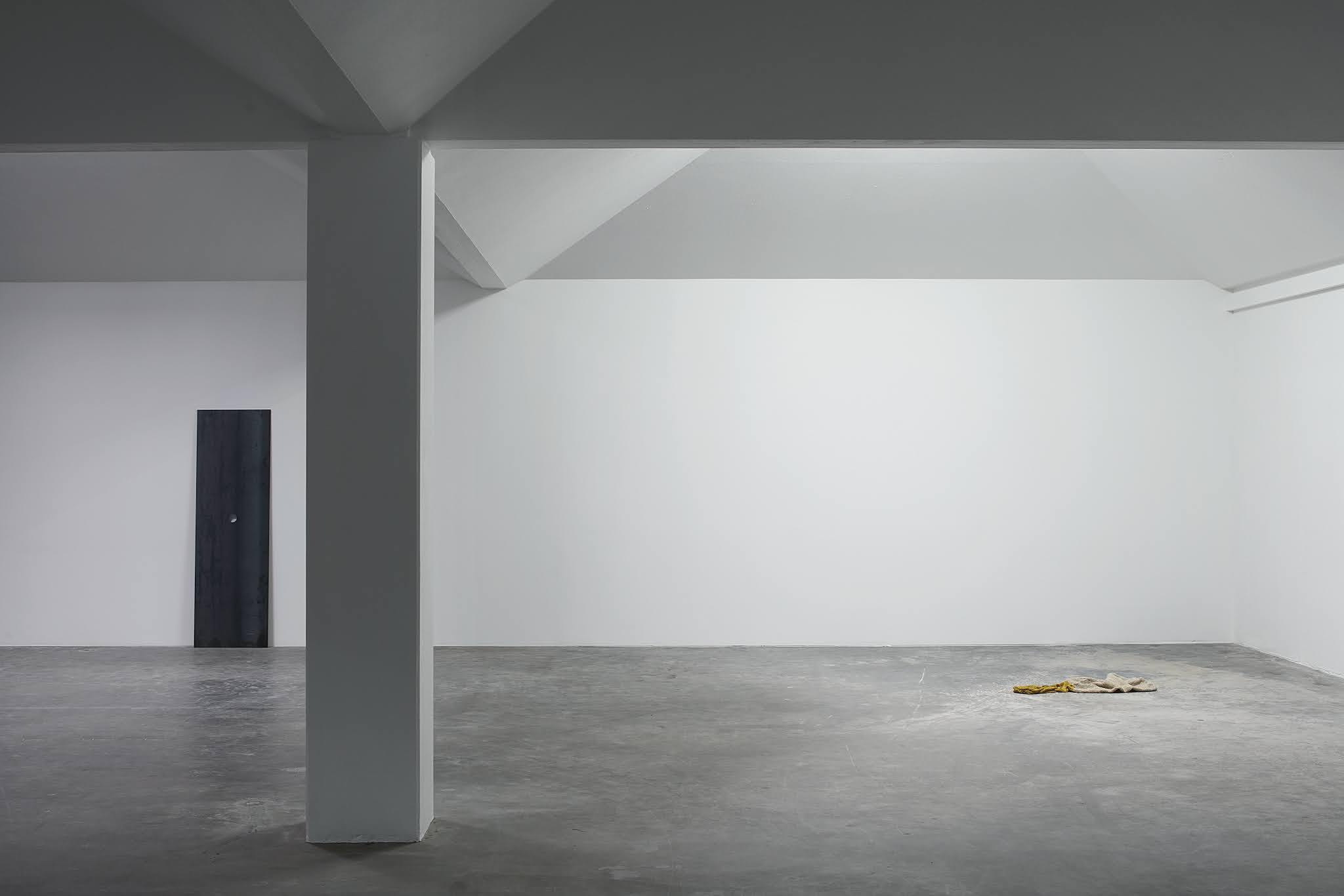 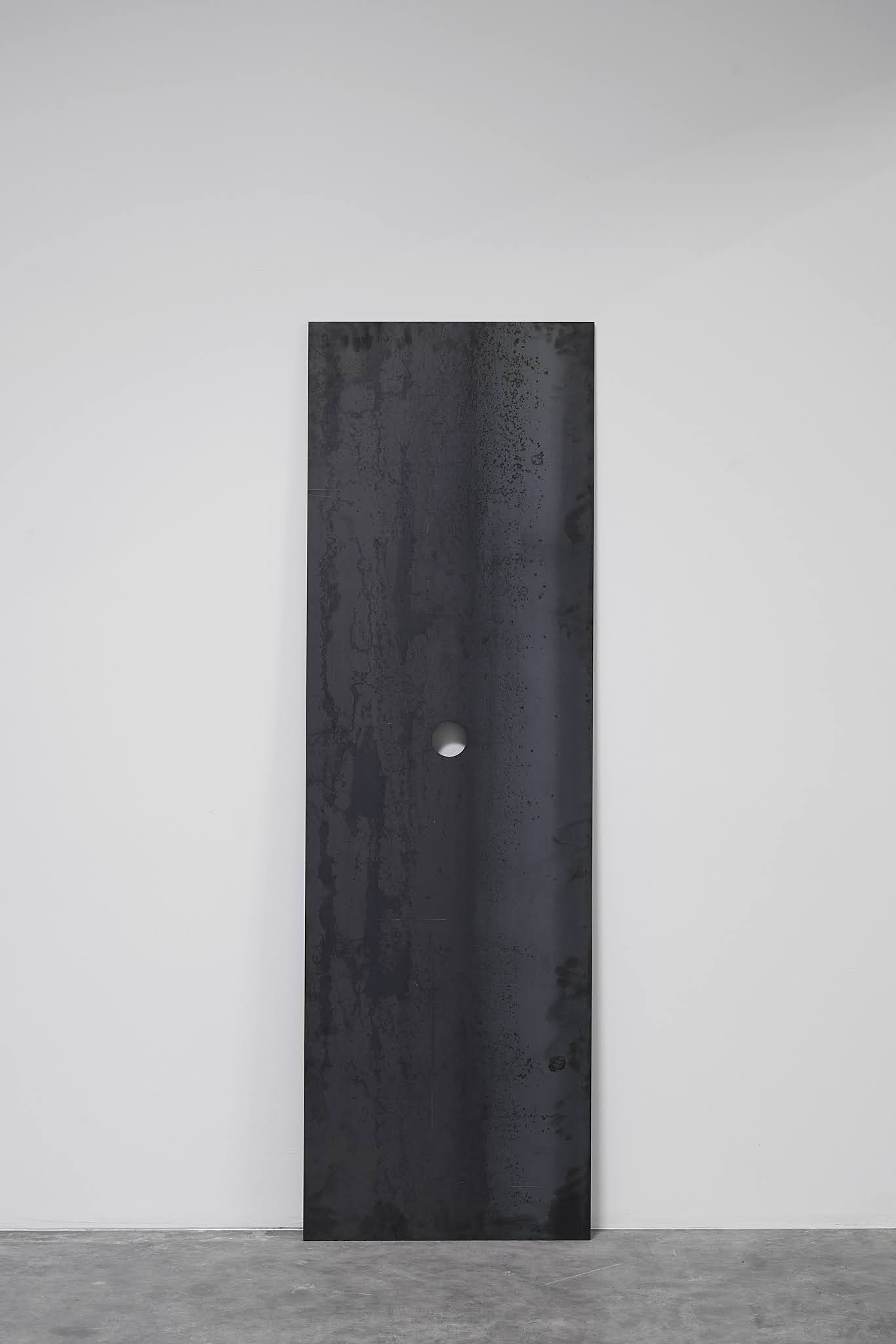 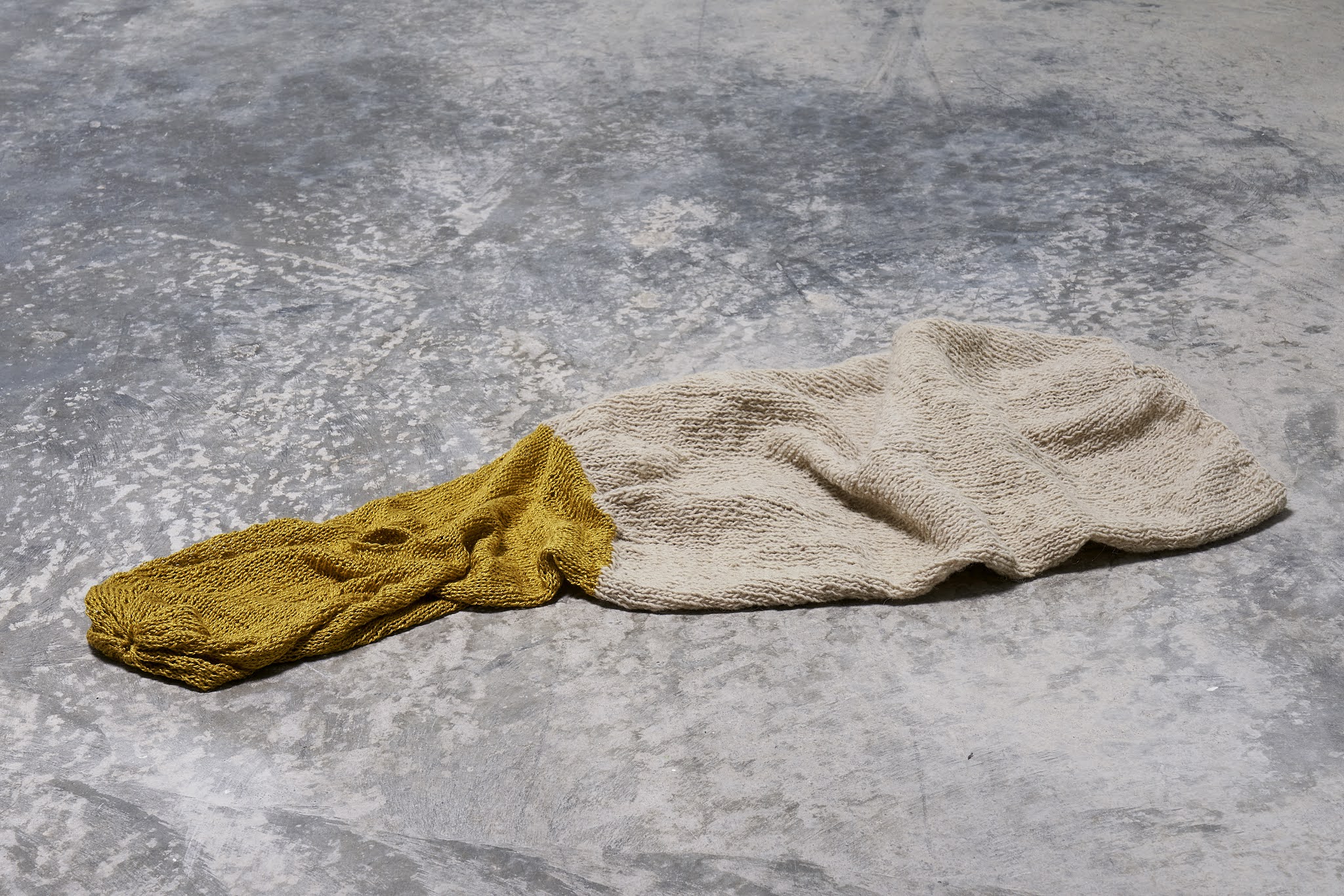 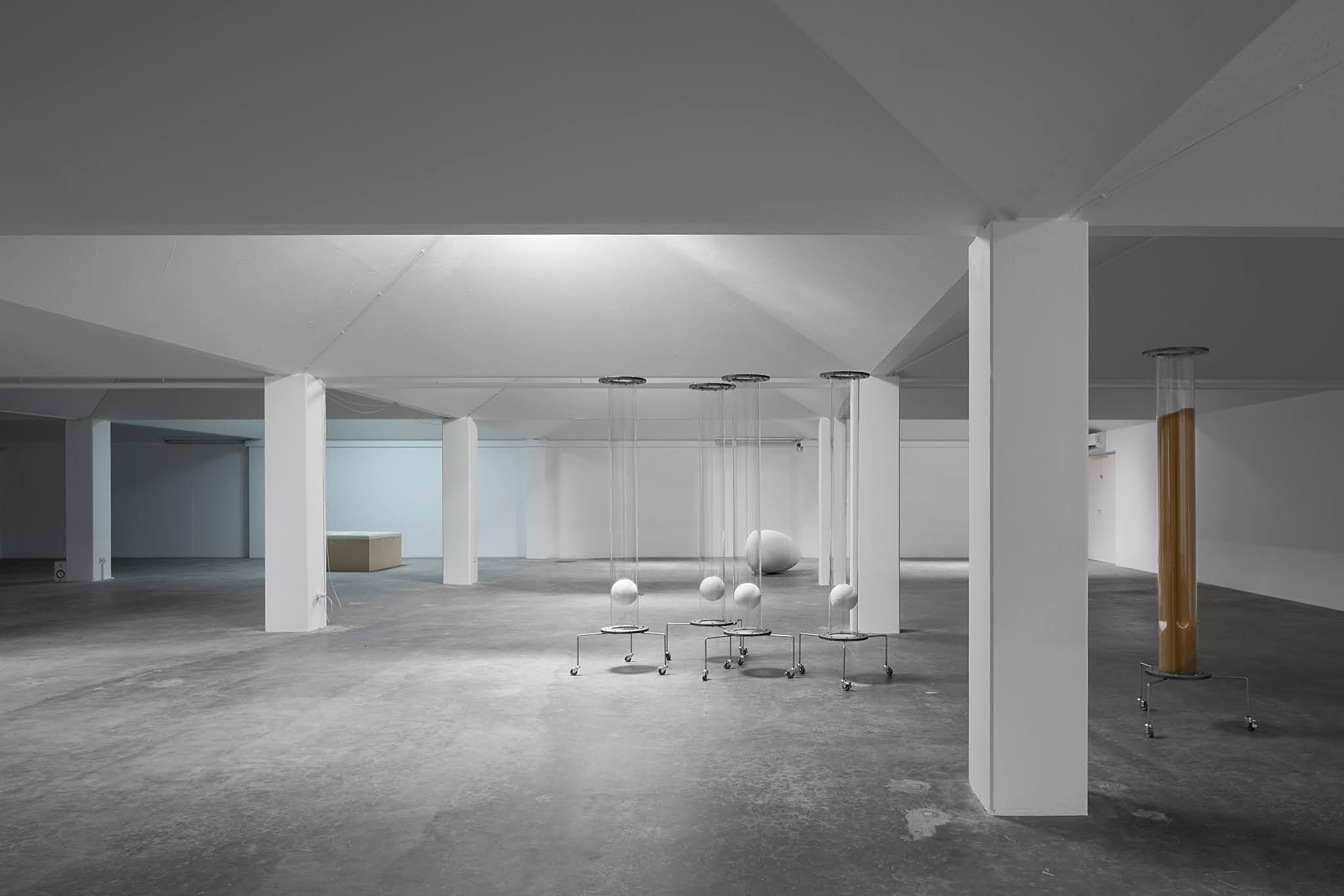 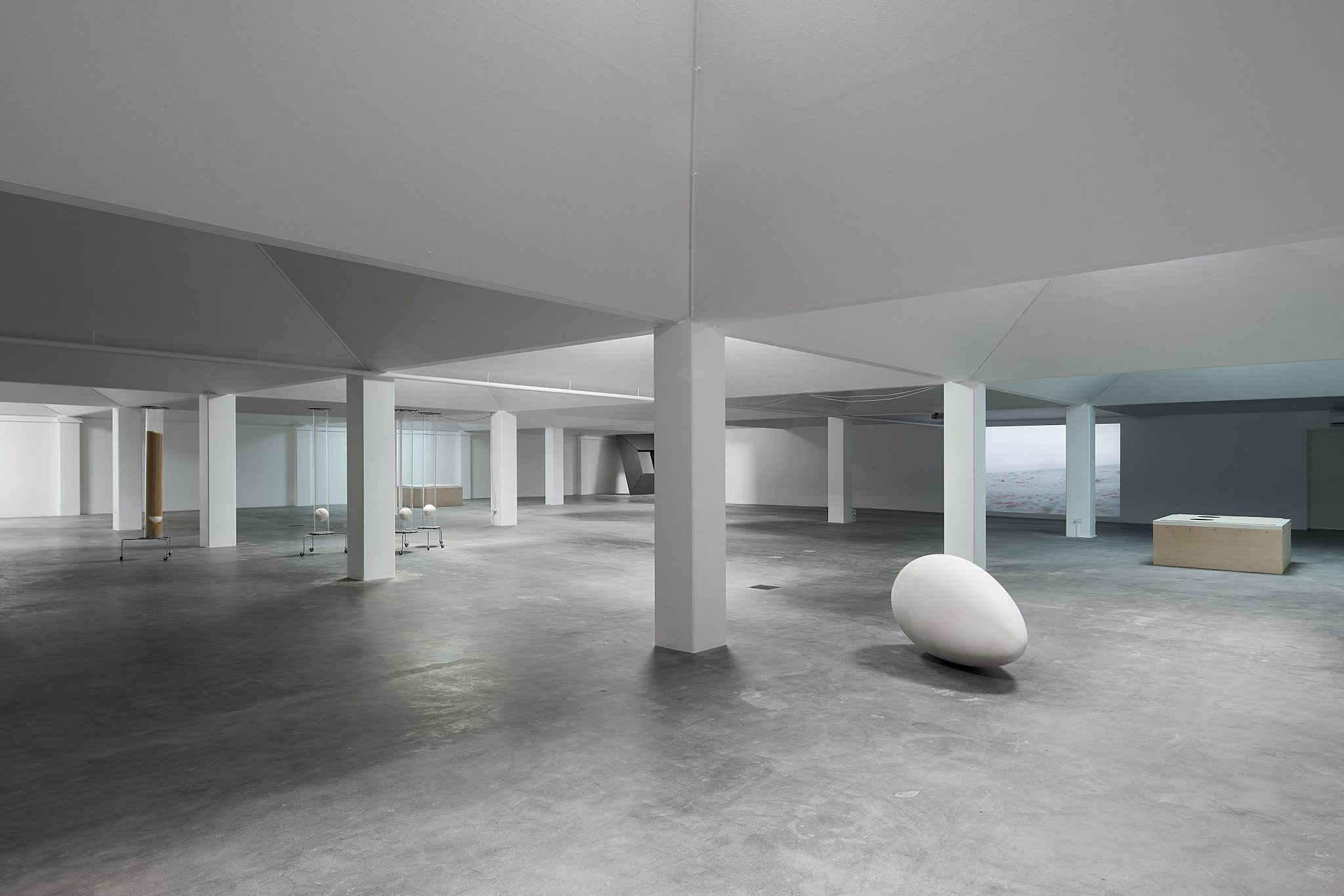 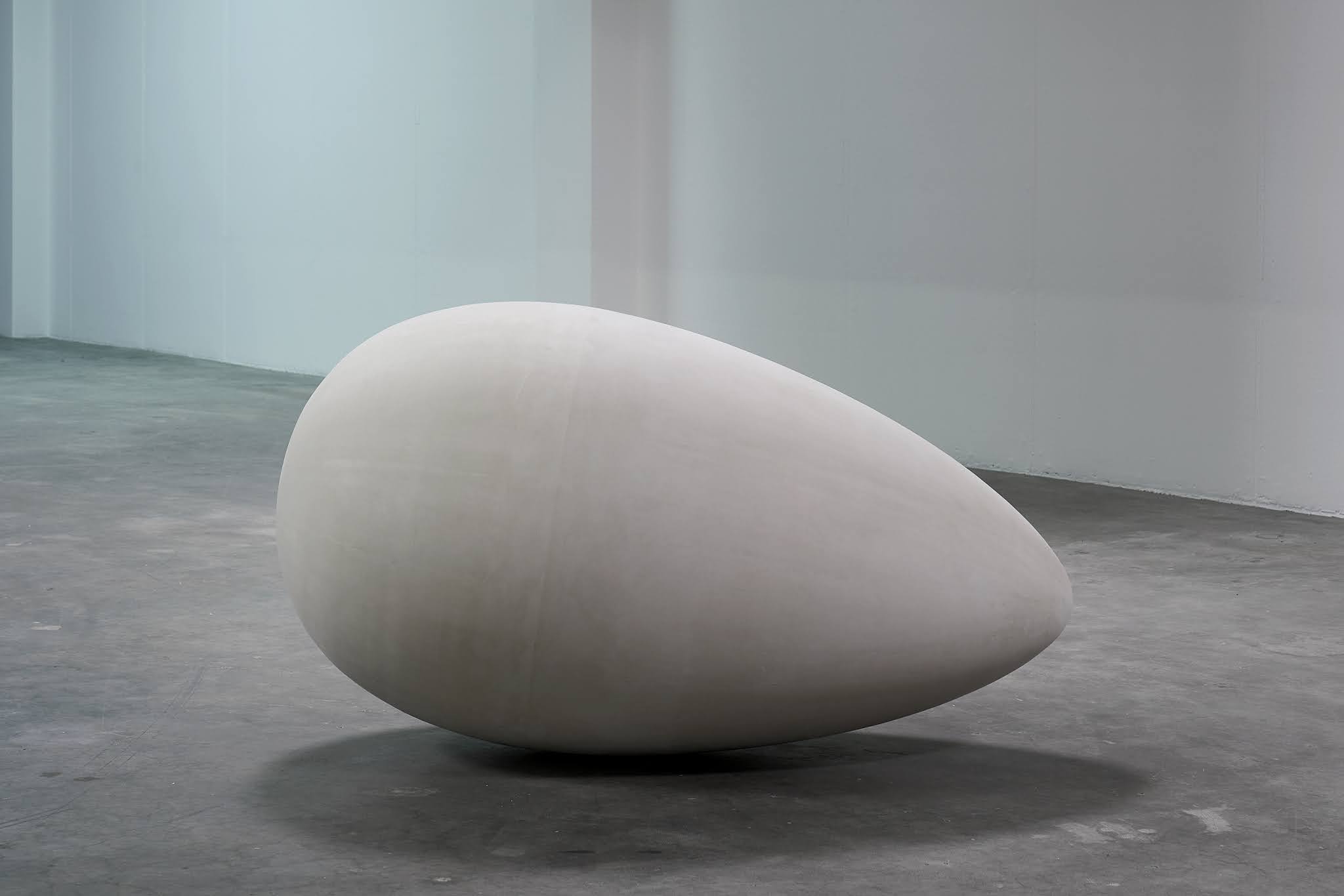 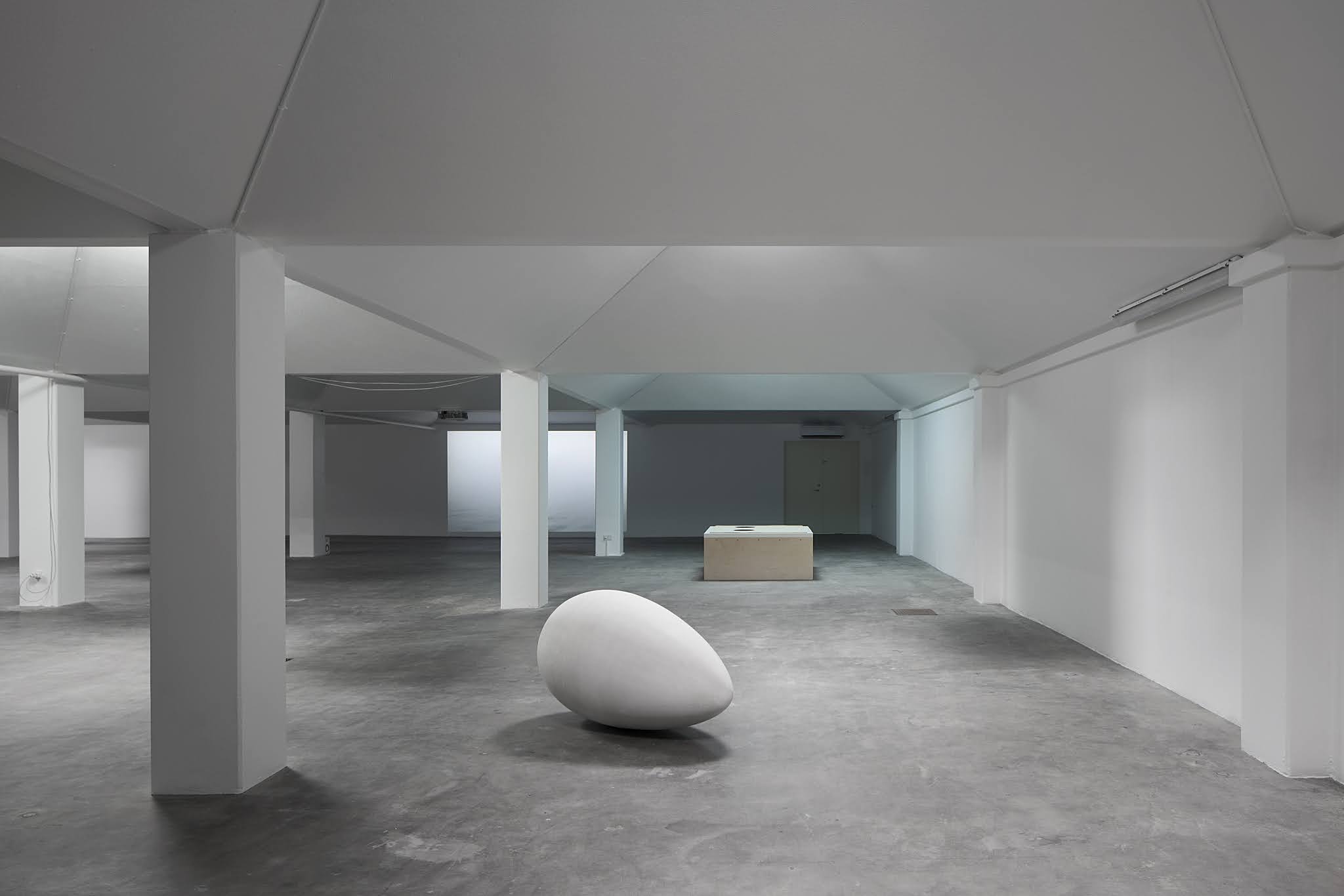 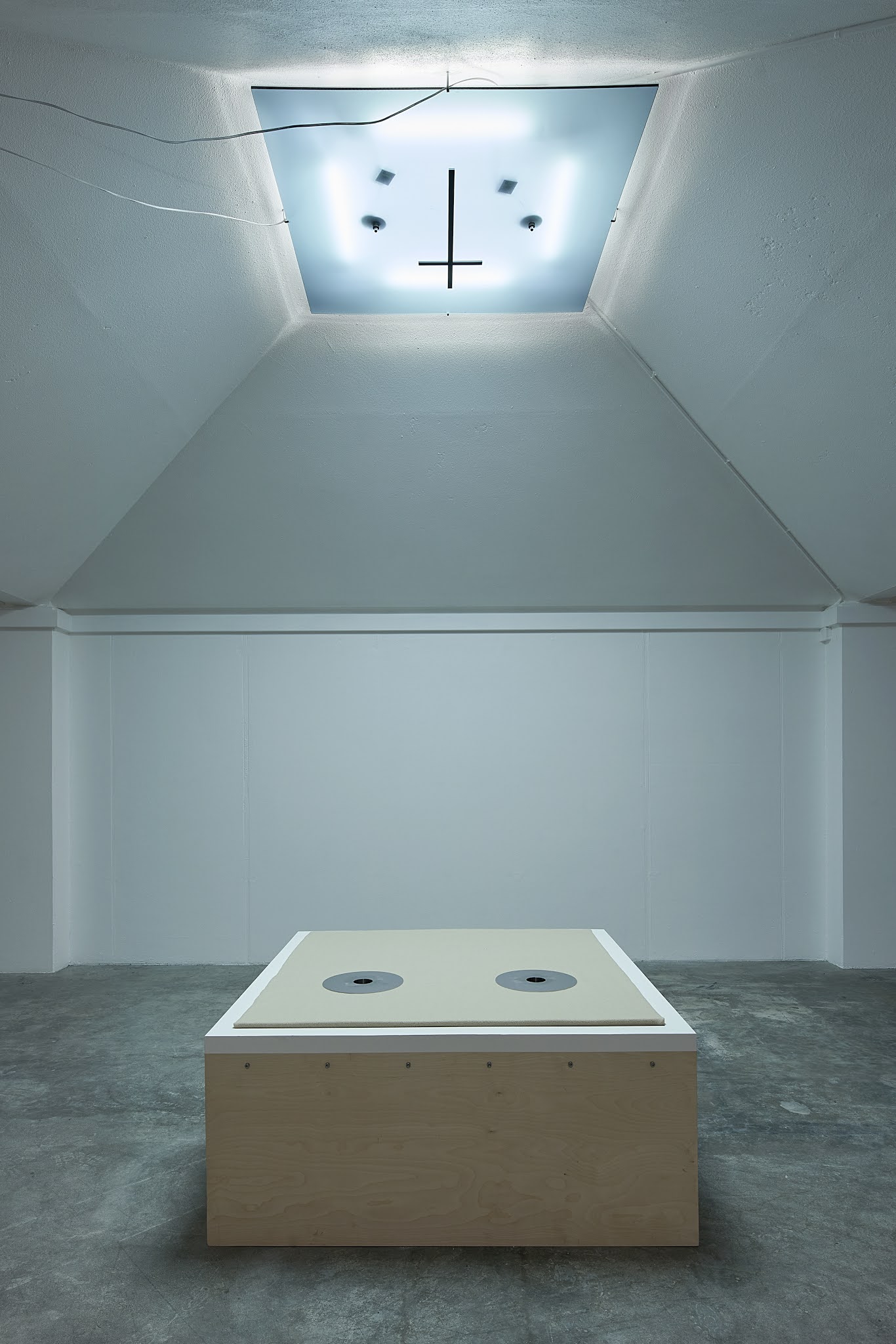 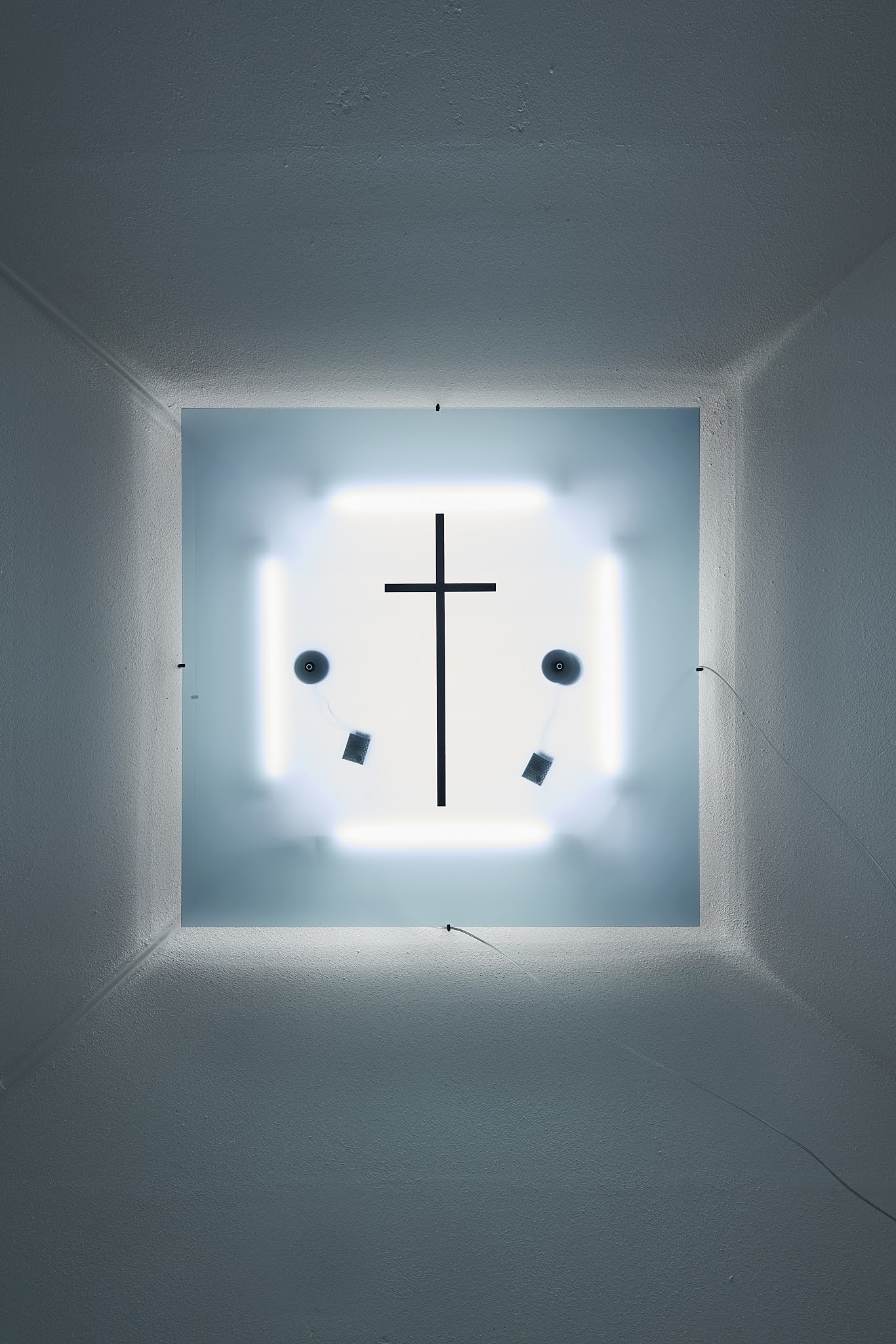 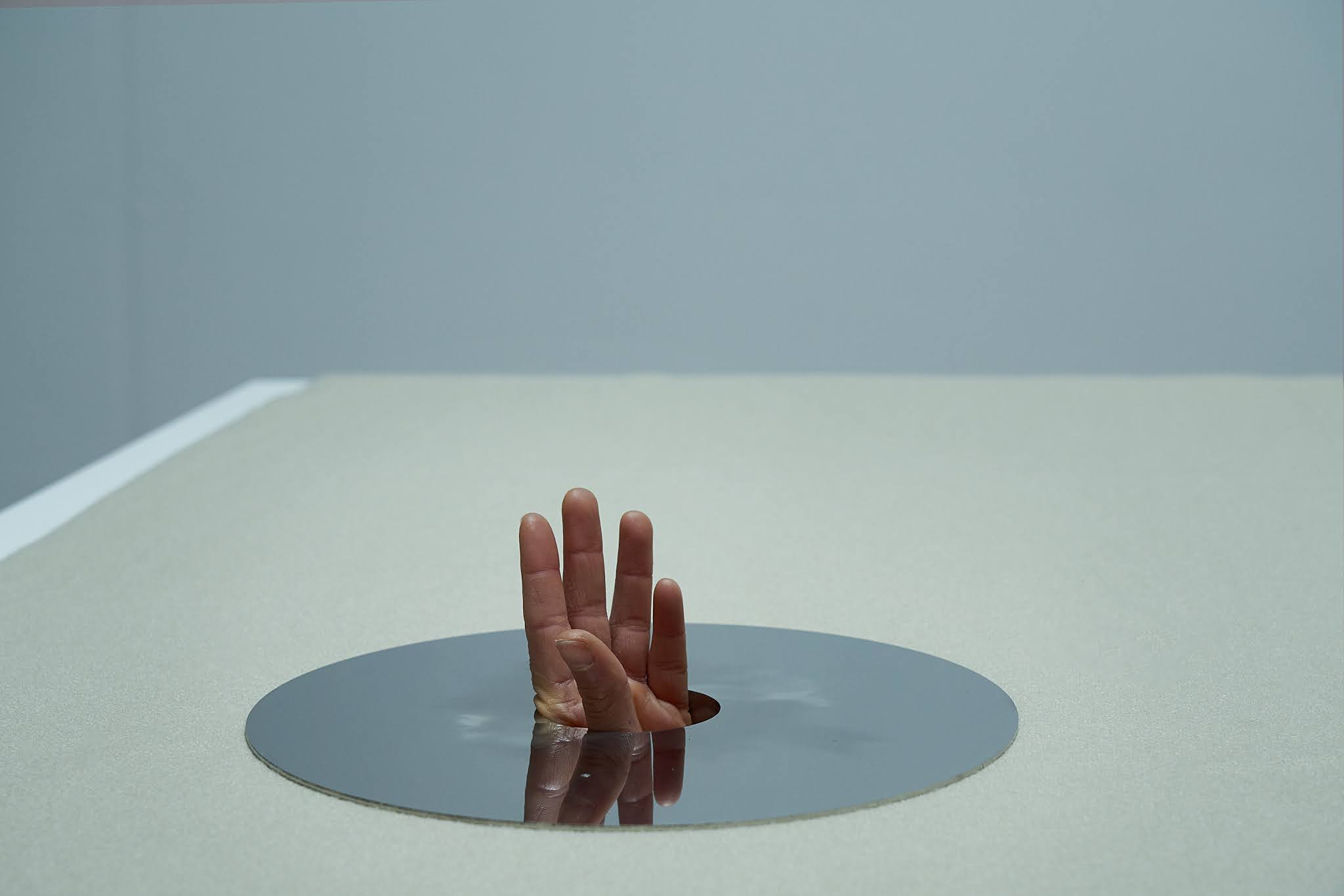 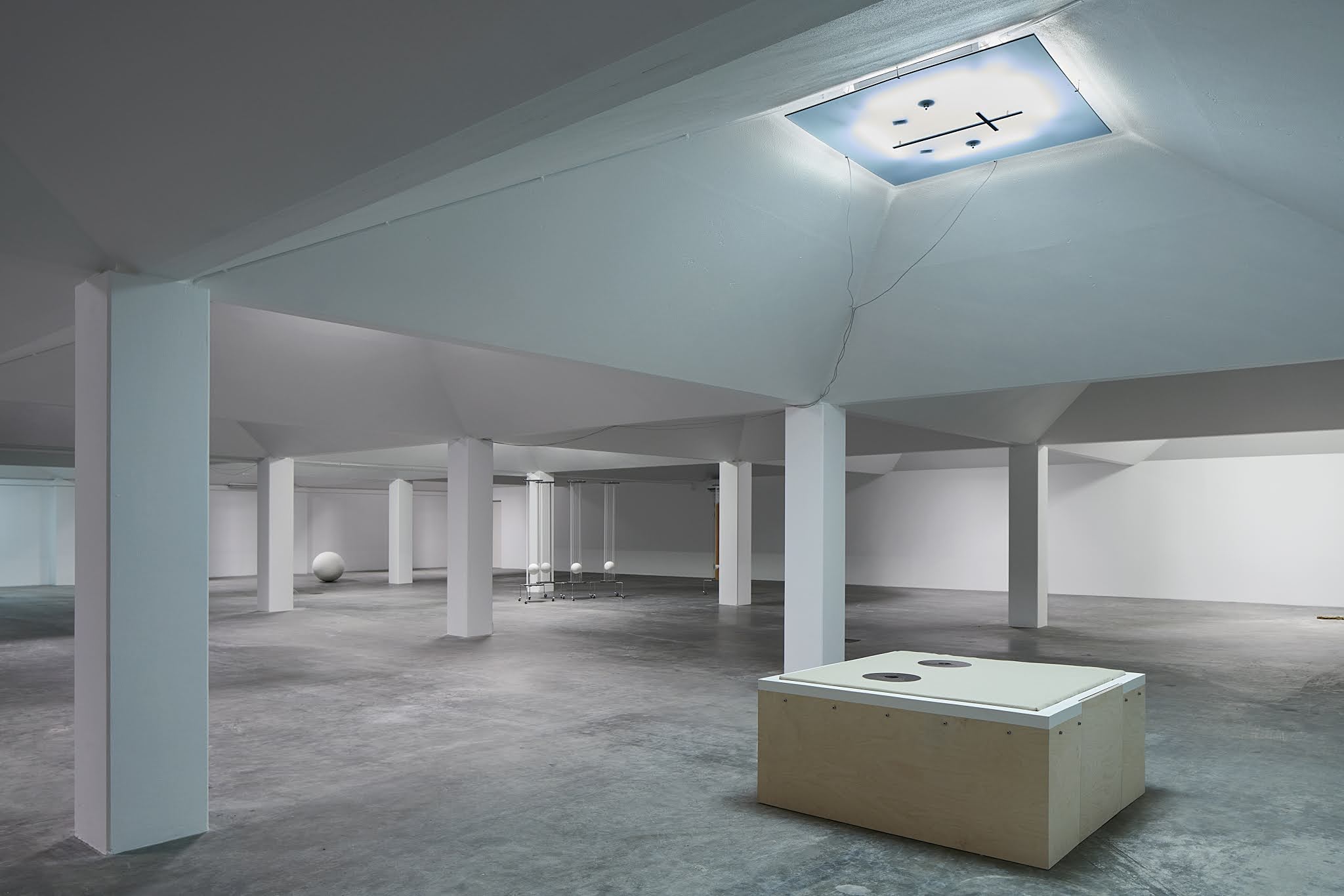 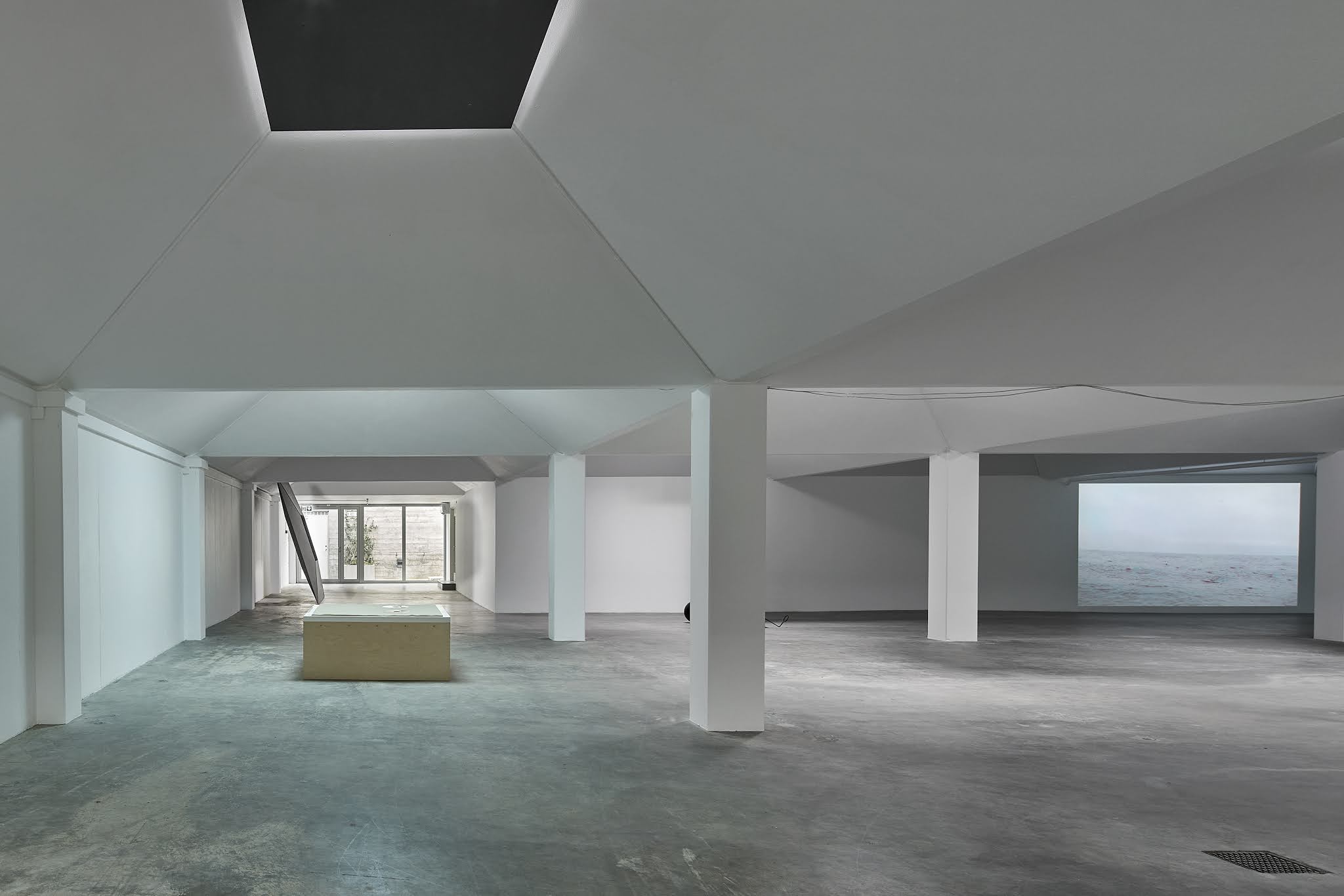 Installation view
All images courtesy and copyright of the artist and space.
Photos by GRAYSC

Kirstine Aarkrog’s exhibition Risø brings together two spaces that might initially appear disparate: the Danish  nuclear research facility Risø and a therapy room of the kind we see in psychoanalysis. In Aarkrog’s imagery these  two spaces share a formal likeness, and the processes with which they are concerned correspond logically:  radioactive material implants itself in the body and affects it from within, as does psychological trauma.

Risø nuclear research facility was inaugurated in 1958 on a peninsula in Roskilde Fjord, and throughout the  following decades the centre served as a hub for research in the peaceful utilisation of nuclear energy. Three  reactors were built, and enriched uranium was flown in from the US. Meanwhile, the Cold War unfolded in the form  of an arms race in the East and West, and the superpowers’ nuclear bomb tests were detectable as radioactive  fallout everywhere on the planet. Some of it landed on pastures and was consumed by cows that produced  radioactive milk, and radioactivity could subsequently be measured in small concentrations in baby teeth.

Kirstine Aarkrog’s maternal grandfather, health physician Asker Aarkrog, worked at Risø from its founding until his  retirement in 1999. Her grandmother was a psychiatrist. The nuclear family (a term that was introduced in the same  period) lived in employee housing on site, and Kirstine’s mother’s baby teeth were used in radioactivity research.

The threat of a nuclear third world war loomed large. In such a war, the entire globe would be contaminated. People  prepared in several ways – at Risø, among other things, by developing a method for purifying milk contaminated  with radioactive material. The purification of milk was a balancing act: if purified too zealously, you risked losing  the milk’s nutrients, thus rendering it ineffectual. Conversation between Kirstine Aarkrog and her grandfather about  the purification of milk forms the basis for the exhibition.

Milk – this miracle drink which builds up children’s bones and, in doing so, maintains the body of society. In milk,  the collective and individual are unified. What other invisible entities flow through families along with milk? Which  traumas are passed down from generation to generation, and which decay over time? And if radioactivity could be  eliminated from milk with the help of chemical processes and instruments, could psychological trauma be treated  in the same way?

The exhibition Risø resurrects Risø, this time as a research centre for trauma therapy. The instruments and  protective gear used here have been developed with the aim of purging psychological trauma. An attempt is made  to expel these invisible entities through physical experiments and mental games in the same precarious balancing  act between contamination and nutrient loss as applied to milk.

The objective at Risø was to develop nuclear energy in Denmark, but public opposition mounted throughout the  1970s, and in 1985 the plan was abandoned. The facility continued as a research centre, and the dependable  reactors attracted scientists from across the globe. In 2000, the biggest reactor was shut down after a suspected  leak, and it was decided to decommission the facility. Risø was converted into an interim repository for radioactive  waste, which will serve until 2073, by which time a final repository must be found.

Like at the original nuclear research facility, it is not only clean energy that is generated at this research centre for  trauma treatment – there is also an accumulation of contaminated material that is passed on as a task for current  and future generations to handle.

Kirstine Aarkrog (b. 1986, Denmark) lives and works in Copenhagen. In her work, she is occupied by the  concept of human orientation in space, both physically and mentally. Aarkrog uses sculptural and functional  objects to concretize fictions and unrealities with the body as a central element.