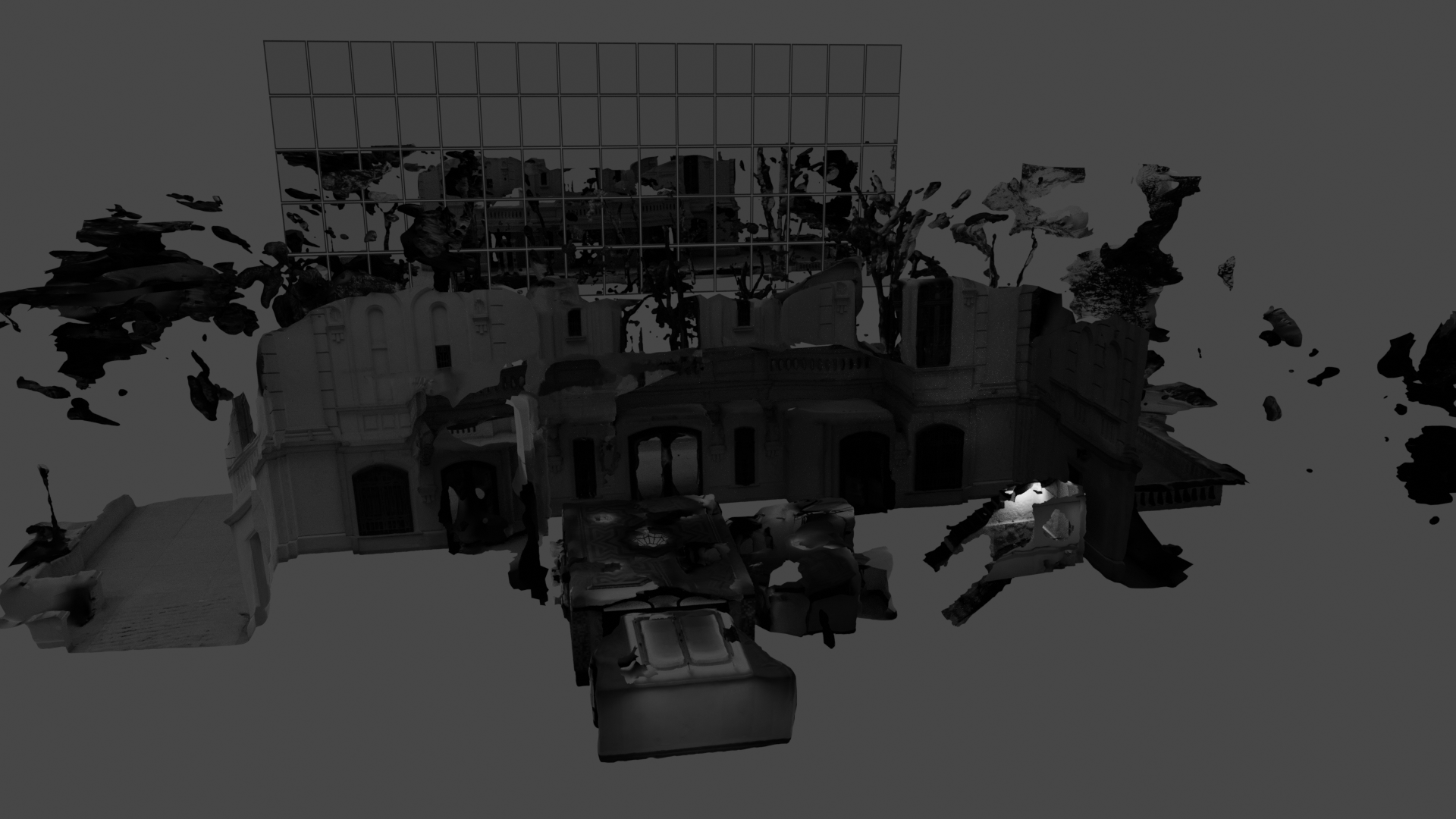 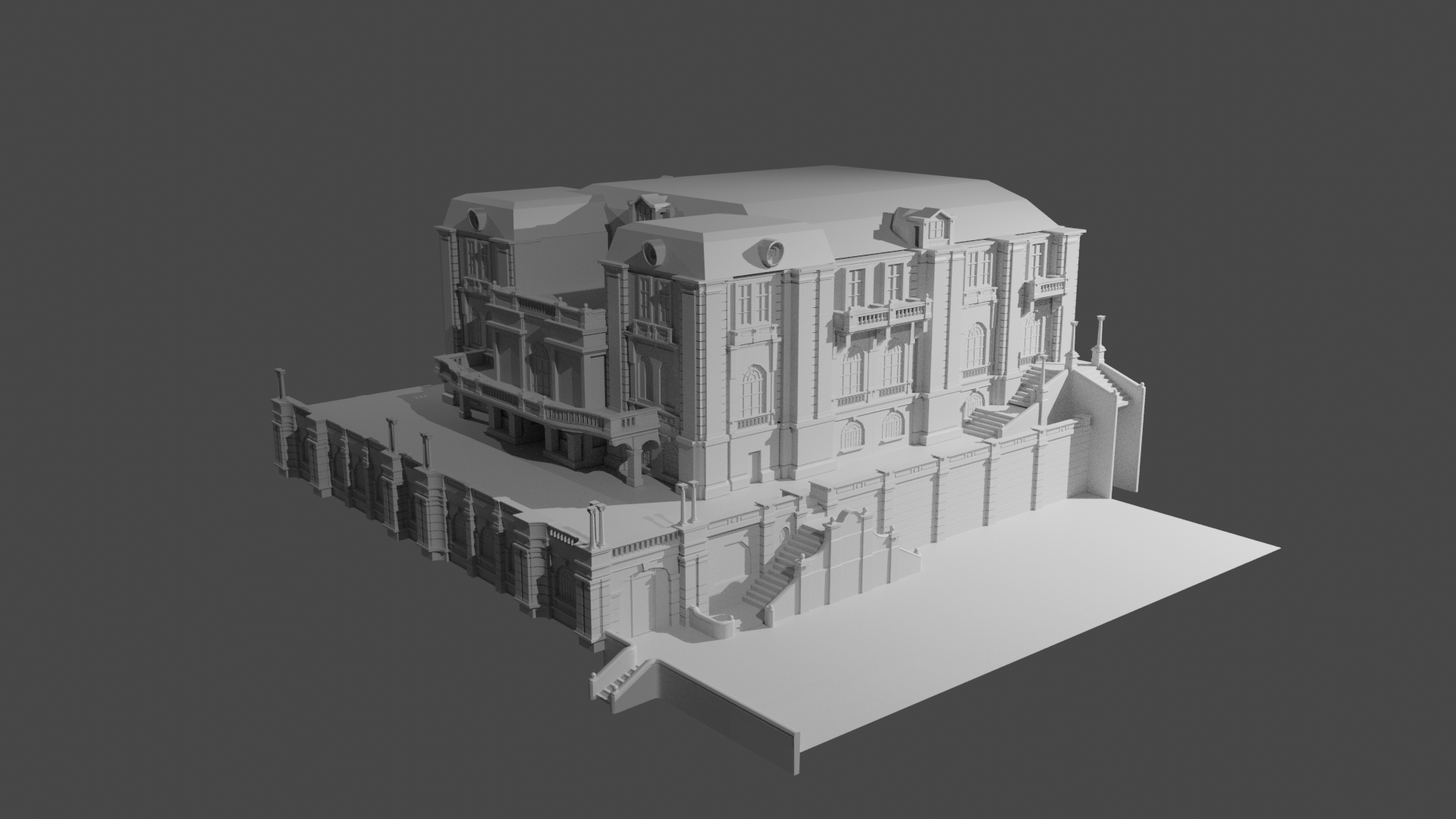 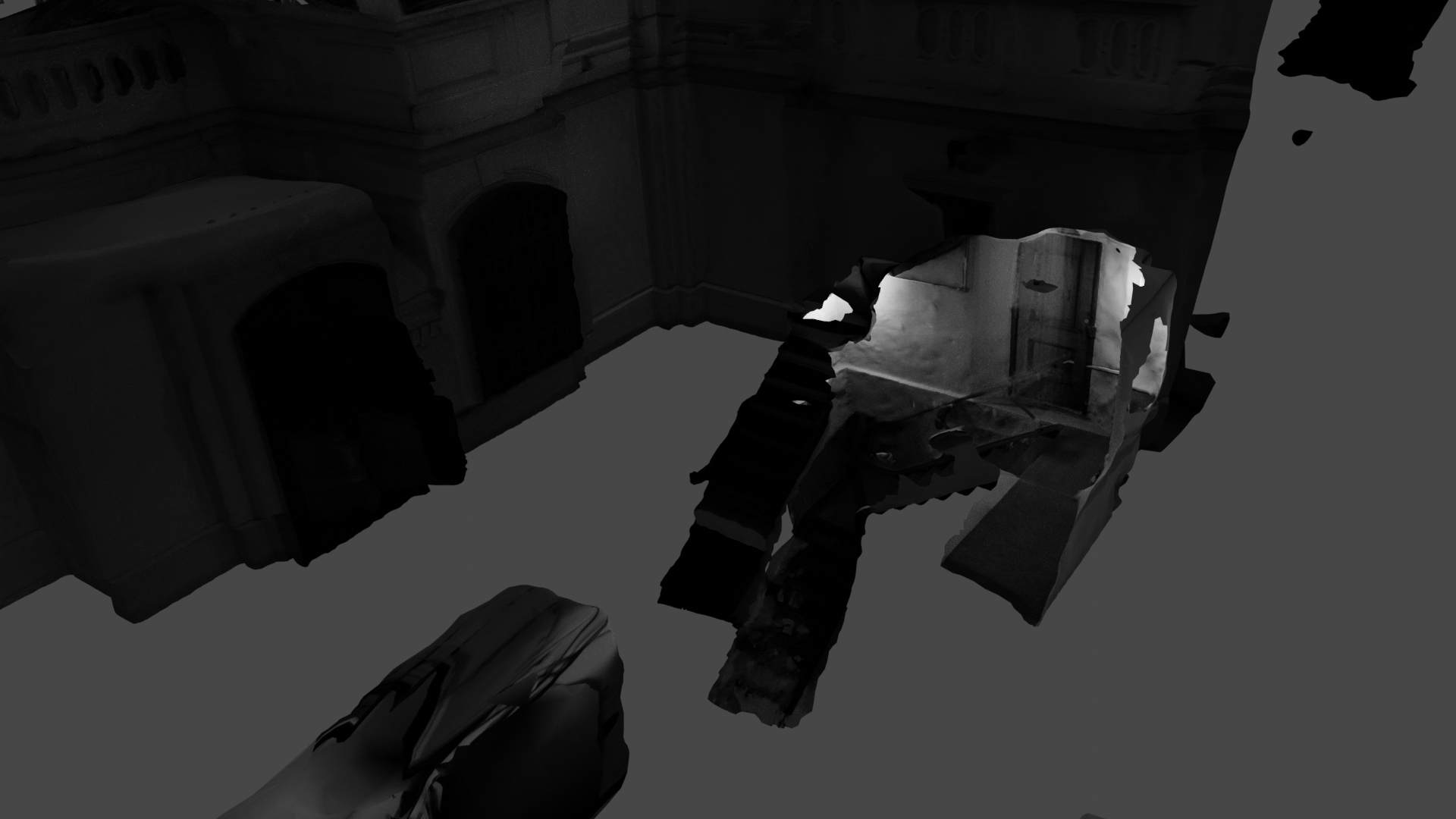 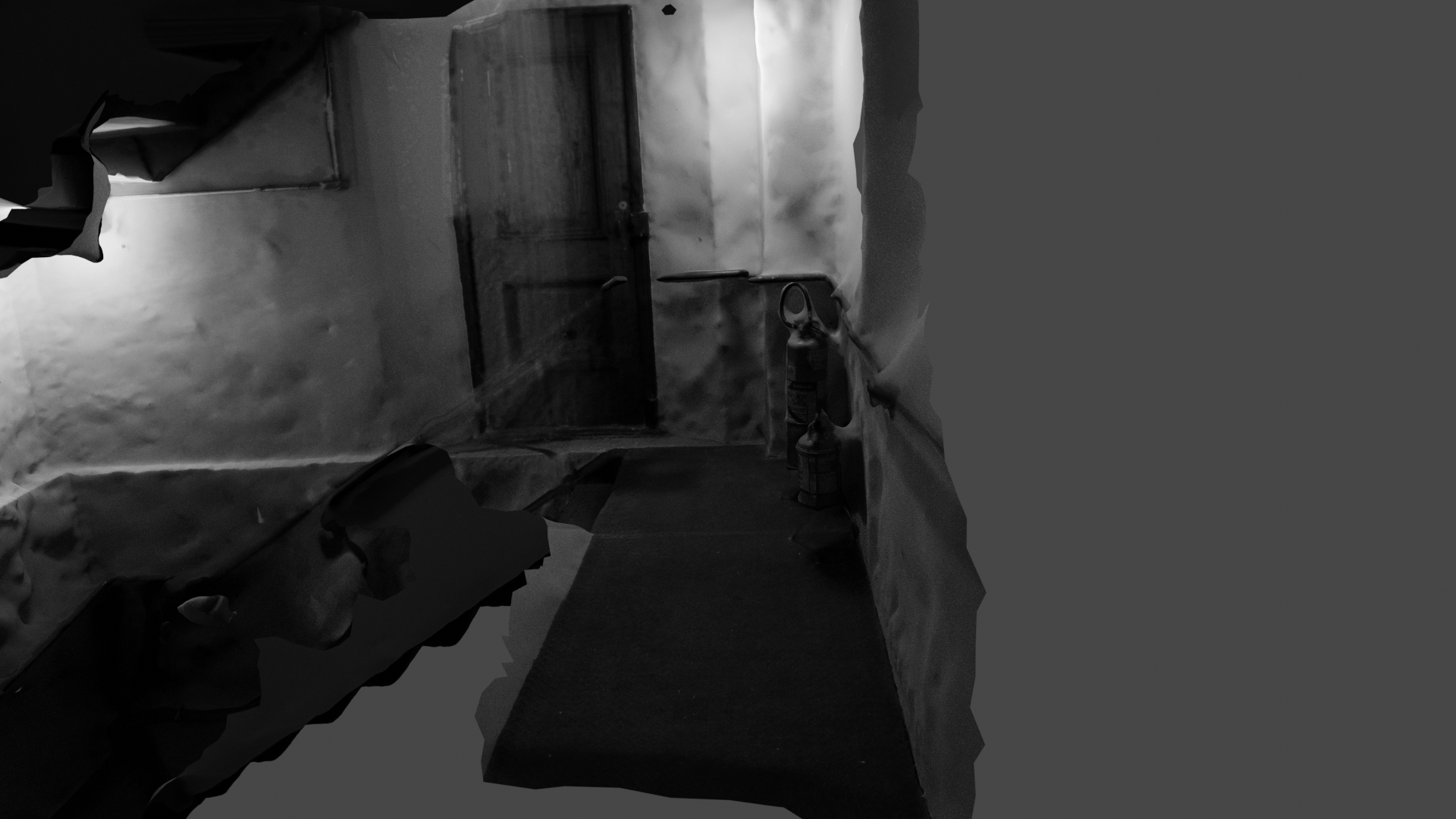 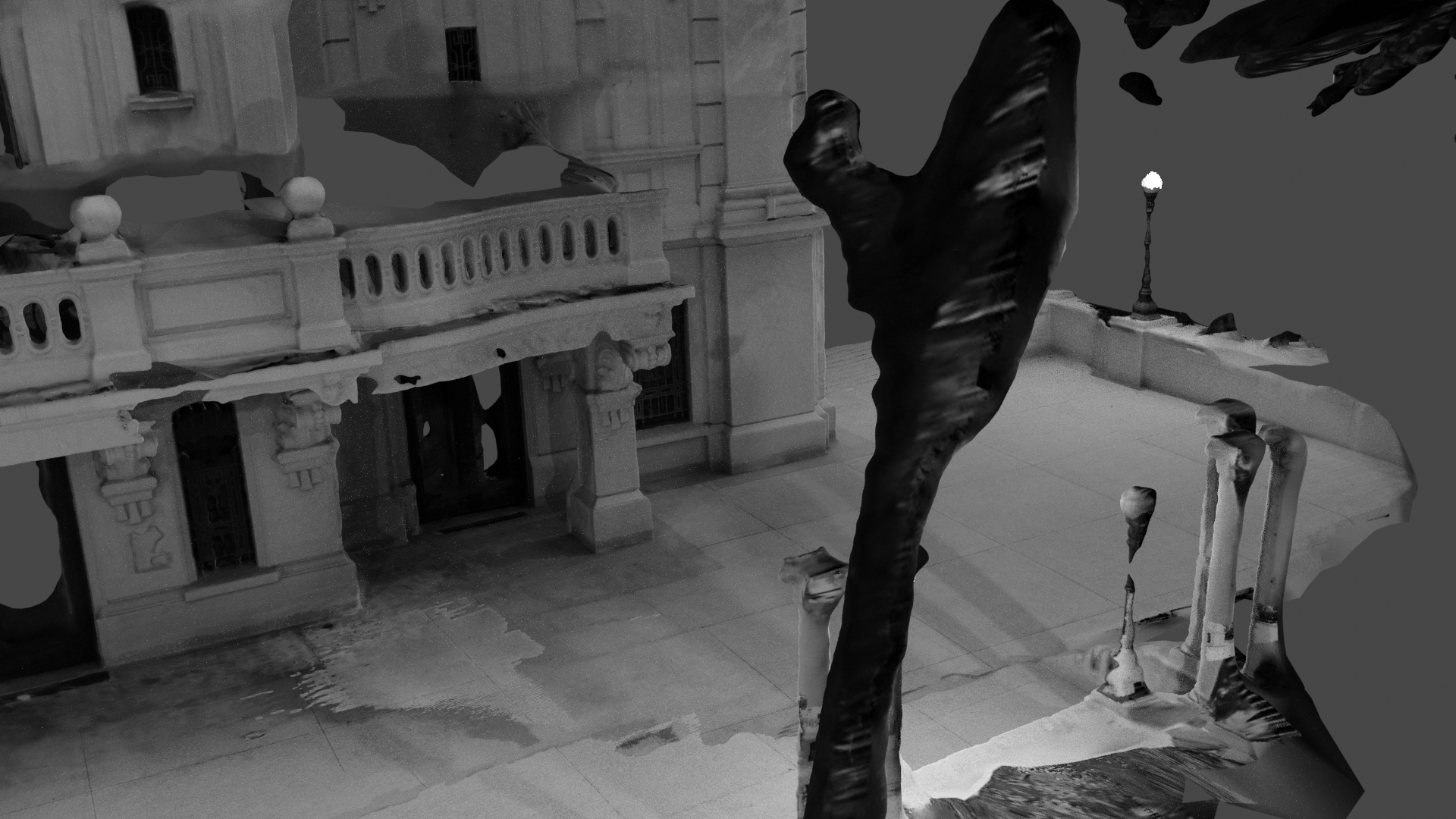 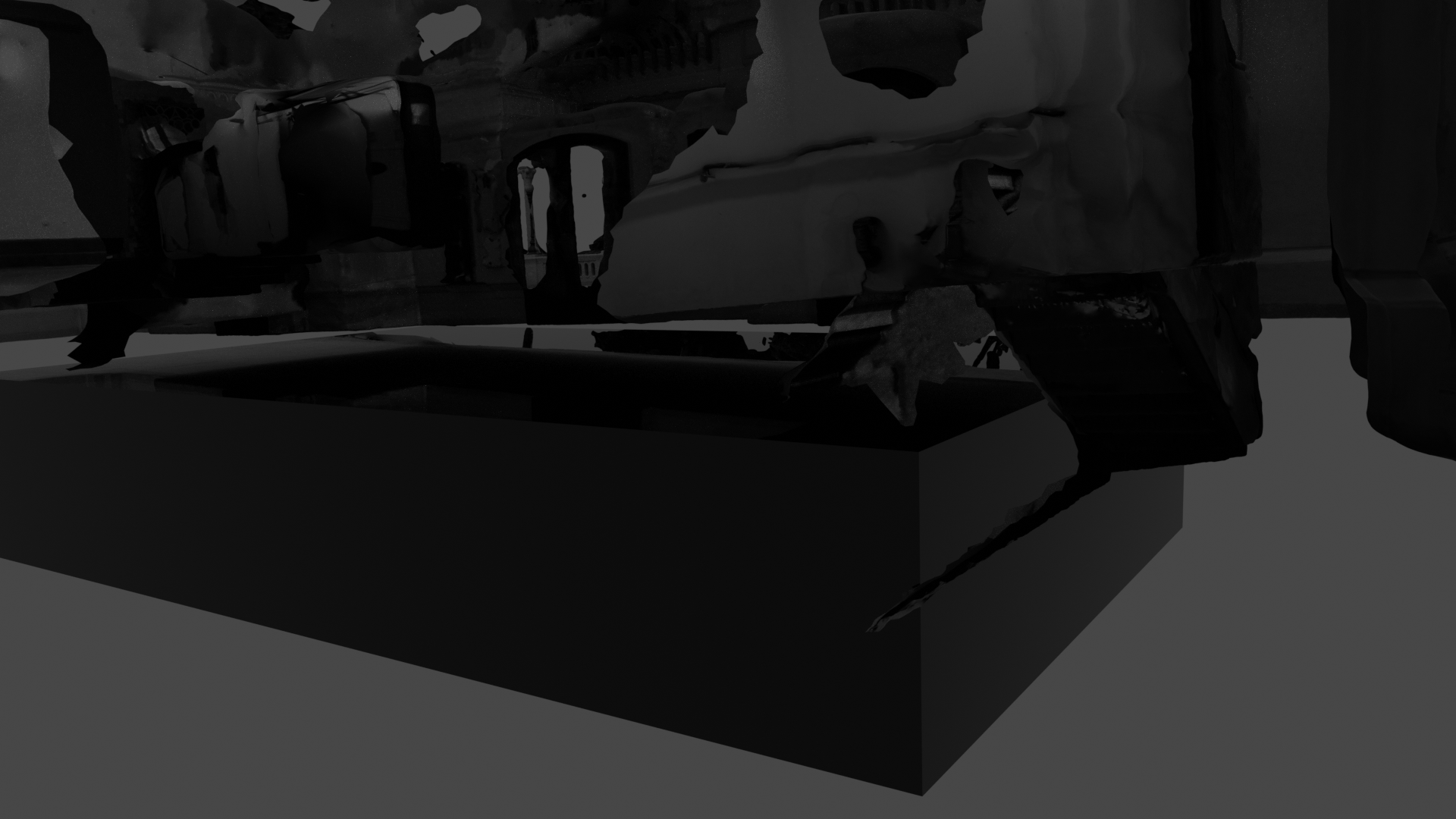 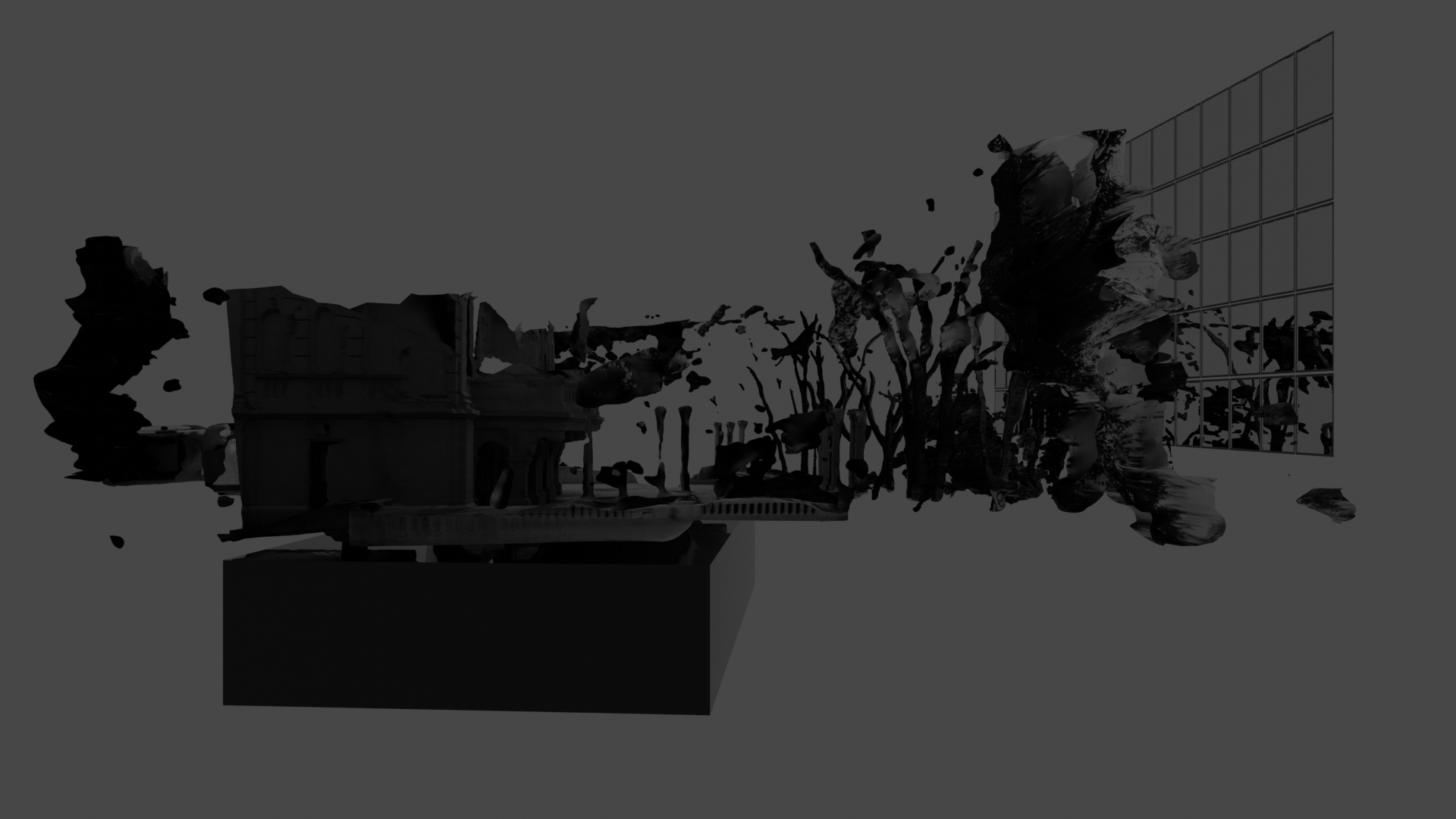 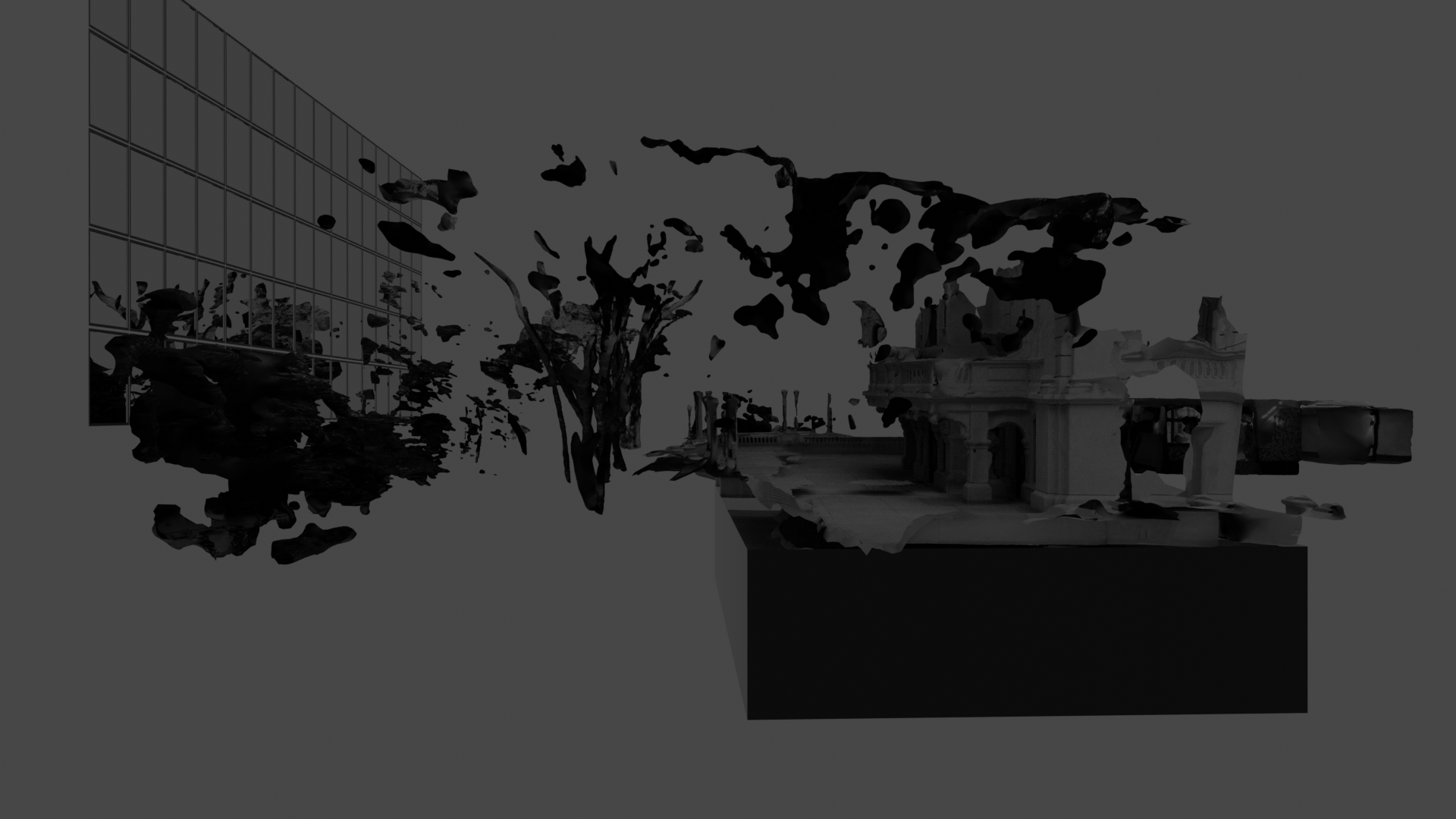 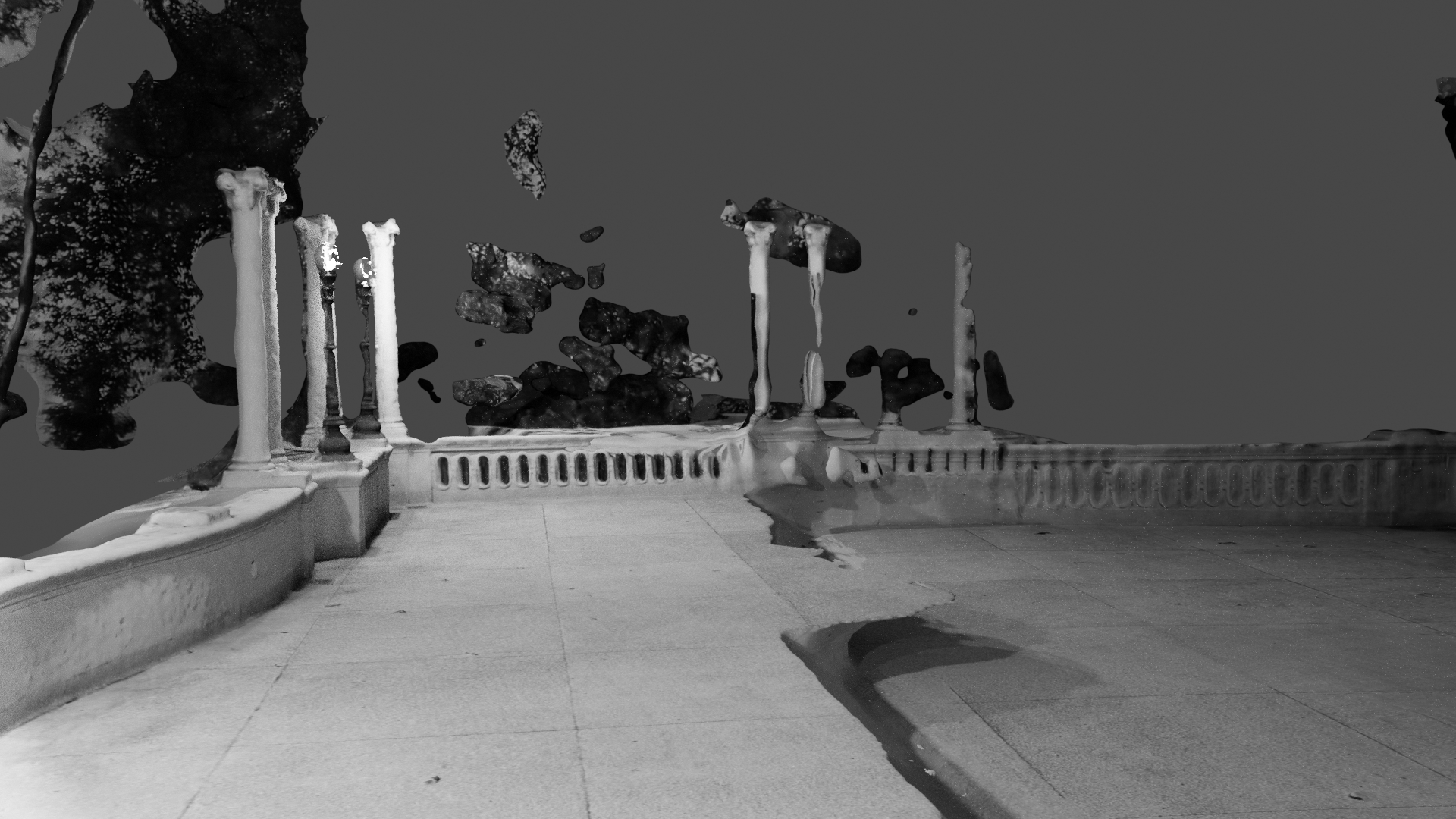 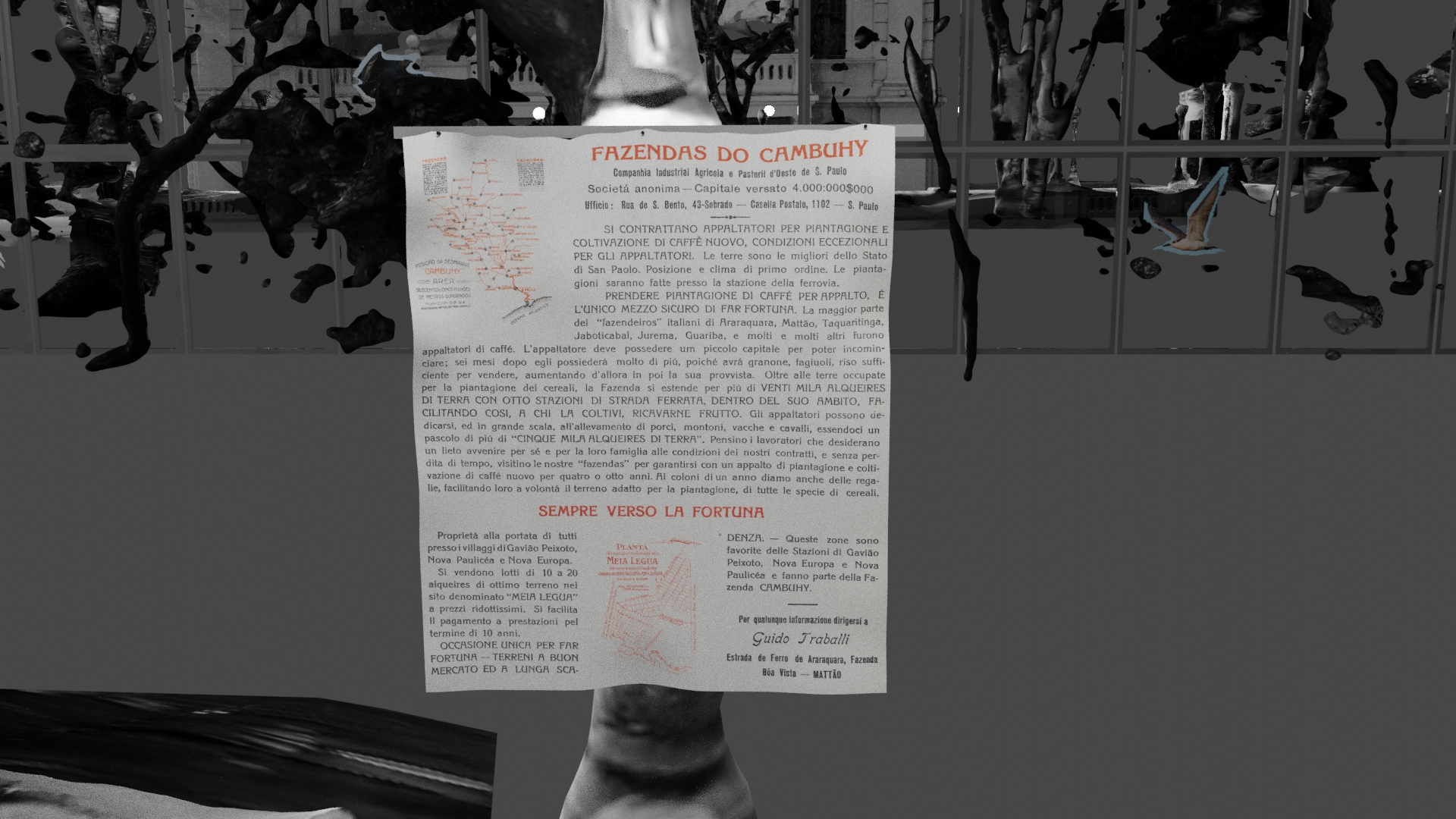 All images courtesy and copyright of Videobrasil and the artists.

A testament of the São Paulo elite’s desire to emulate Europe and of their social isolation during the early 20thcentury, Carlos Leôncio de Magalhães’s mansion, in the Higienópolis neighborhood, is the focus of Giselle Beiguelman’s and Ilê Sartuzi’s nhonhô, whose screening, on 08/03, inaugurates Videobrasil Online’s Premieres channel. Recreating the mansion using fragments of photogrammetry and elements of randomness, by means of artificial intelligence and machine learning programs, the artists draw connections between architectural features and social elements, creating a distinct interpretation of the coffee baron’s biography, as well as other aspects of the history of São Paulo.

The premiere of nhonhô is complemented by a recording of a remotely held conversation between Giselle Beiguelman and Ilê Sartuzi, in which they discuss the development of nhonhô and comment on their conceptual choices and on their use of distinct visual and sonic languages. The conversation is interspersed with sequences depicting processing,  colorization, and deconstruction of photographs and virtual models which were used in the video.

nhonhô offers an opportune perspective on Higienópolis, which literally means hygiene city: the neighborhood where, in the early 20th century, the wealthiest segment of the population could breathe without fear of falling ill with diseases that proliferated in working-class tenements – nhonhô inaugurates Videobrasil Online’s Premiers channel. In between exhibitions and curatorships, the online platform will regularly hold first screenings of works that offer fresh, powerful, and pertinent visions of today’s complex realities.

nhonhô is one possible biography of a mansion which represents the Europeanizing delirium and the isolationist attitudes of the São Paulo upper class of the early 20th  century. The title character, Carlos Leôncio de Magalhães, was one of the foremost coffee  barons in Western São Paulo. In life, he carried the nickname nhonhô, a diminutive term used by enslaved persons when addressing their master’s children. He built his mansion in the Higienópolis neighborhood (where the bourgeoisie sought refuge from the rapidly growing city), using European ideas, techniques, and materials, in an attempt to reflect all his earthly glory. He died, however, before it was finished.

Without resorting to the human figure, nhonhô centers around the virtual reconstruction and deconstruction of the architectural elements of Nhonhô Magalhães’ mansion, which presently finds itself in limbo between ruin and a proposed remodeling meant to align it to the new Higienópolis beauty standards, almost a century after its construction. The

temporal relations between architecture and society serve as a lens through which one may comprehend the protagonist’s past as well as other aspects of São Paulo’s history.

Giselle Beiguelman and Ilê Sartuzi share an interest in (and a similar research on)  architecture and the digital environment. nhonô is their first collaboration. Without full access to the mansion, the artists chose to recreate it by using fragments of photogrammetry– which, they contend, are “surrounded by gaps of unrevealed information”–and elements of randomness, by means of AI and machine learning programs.

Conceptual frameworks and formal choices systematically inform one another. The temperate, autumnal, and reddish palette, for instance, is generated by algorithms that search for color schemes in European and North American databases. The “deviation” in the colorization of historical tropical images ultimately mirrors the distorted image that the coffee bourgeoisie had of itself while attempting to create its own private Europe in São  Paulo.

GISELLE BEIGUELMAN is an artist and a professor at the School of Architecture and  Urbanism of the University of São Paulo. She is the author of Memórias da amnesia:  políticas do esquecimento (Edições Sesc, 2019) and a several other books and articles  on digital culture. Recent exhibitions include: Odiolândia (2017), Monumento  nenhum (2019), Coronário (2020) and Quanto pesa uma nuvem? (Galpão Videobrasil,  2016). She is a member of the Laboratório para OUTROS Urbanismos (FAU-USP) and  a coordinator at GAIA (Grupo de Arte e Inteligência Artificial do INOVA-USP). Her works  are part of the collection of the XKM and the Jewish Museum Berlin (Germany), MAR  (Rio de Janeiro), MAC-USP and the Pinacoteca do Estado de São Paulo. She is the  recipient of the 2016 ABCA (Associação Brasileira dos Críticos de Arte) Award for  Distinction, among others. She is a contributor for Radio USP and Zum magazine.

ILÊ SARTUZ is an artist and holds a degree from the University of São Paulo. His research encompasses sculptural objects, projection and video mapping, installations, and theatre performances, and his works address issues such as idealized body images and its relation to virtual and proto-architectural spaces. His works have been shown at  Sesc (Riberão Preto, 2019; Distrito Federal, 2018); CCSP (2018); MAC-USP (2017);  Museu de Arte de Riberão Preto (2020; 2017;2015); Centro Universitário Maria Antônia  (2019) and Galeria Vermelho (2017; 2018; 2019). He is a member of the Depois do Fim da Arte research collective since 2015. His play with no actors cabeça oca espuma de  boneca was held at Firma (São Paulo, 2019). He has also designed video projections for  plays at Oficina Oswald de Andrade, Itaú Cultural, Teatro de Contêiner, and TUSP. In  2020, Instituto Moreira Salles commissioned a video by the artist that draws on Beckett’s  “Worstward Ho!”

For the English version, click on EN on the top right of your screen (desktop) or  the + button (top right) on your mobile phone

Established by Solange O. Farkas in 1991, Associação Cultural Videobrasil was born out of the desire to create an institution that would house a growing body of artworks and publications, amassed since the first edition of the Contemporary Art Festival  Sesc_Videobrasil in 1983. Ever since, Associação Cultural Videobrasil has been working systematically to activate its collection, which comprises artworks from the world’s  Geopolitical South – Latin America, Africa, Eastern Europe, Asia, and the Middle East –,  video art classics, in-house productions, and a substantial selection of art publications. In addition to the Contemporary Art Biennial Sesc_Videobrasil, held every two years,  Associação Cultural Videobrasil carries out a number of activities geared towards research, promotion, and mapping of its collection: international art shows; traveling exhibitions; publications on contemporary art and culture; TV shows and Videobrasil  Authors Collection documentaries; seminars, workshops and meetings with artists and researchers, in constant engagement with various fields of knowledge; and artist residency programs, in connection with an extensive network of international collaborators.