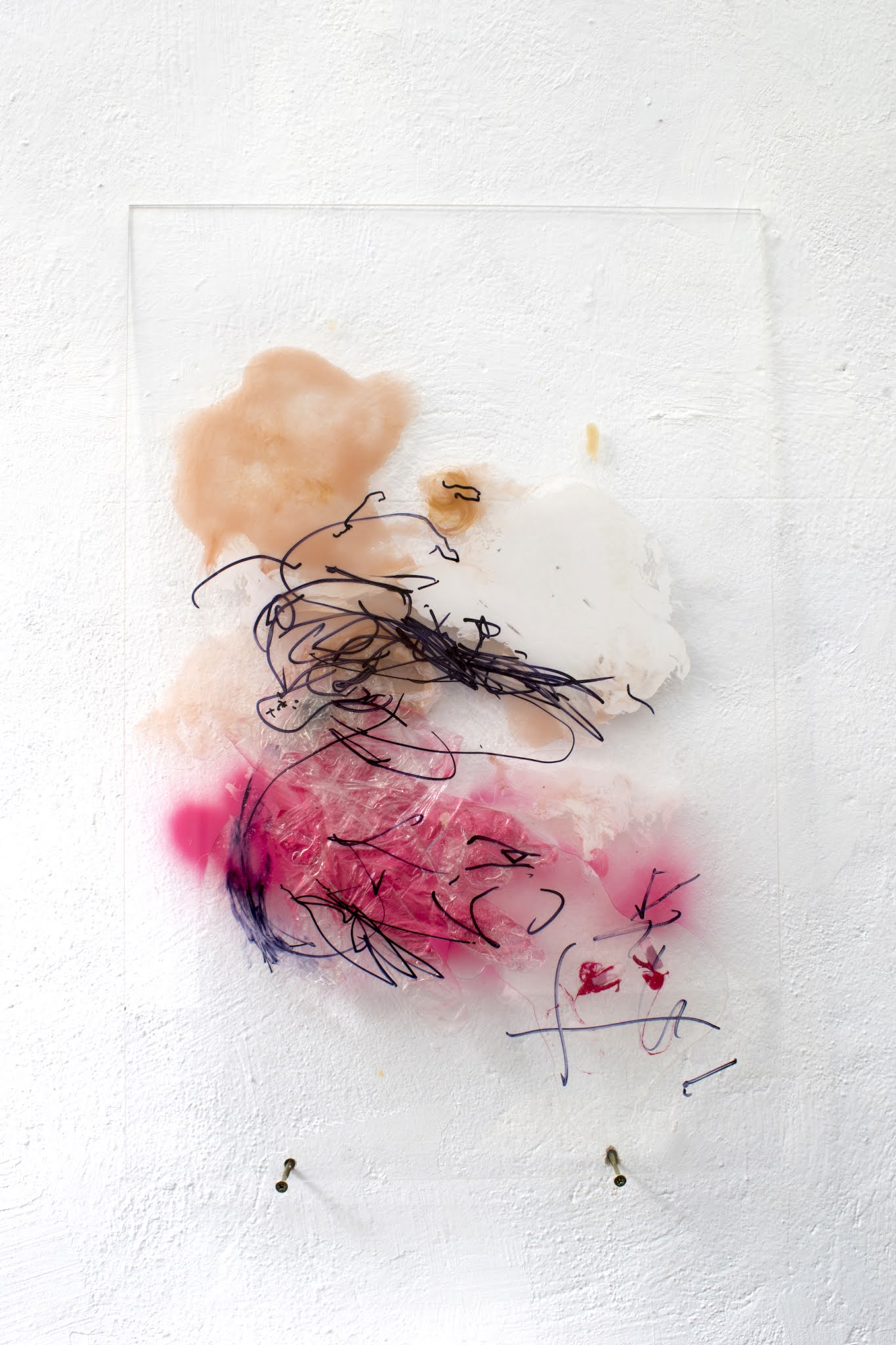 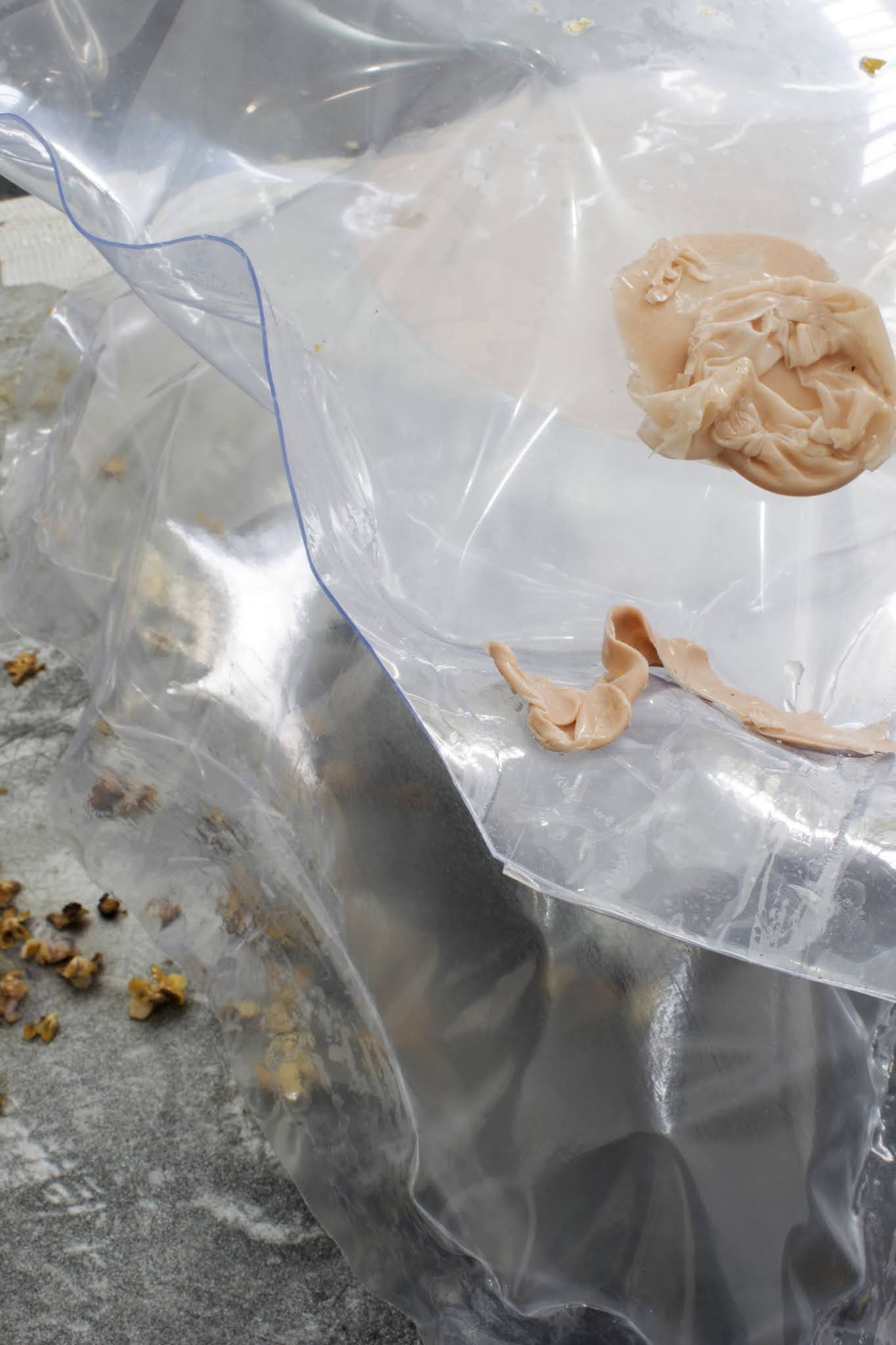 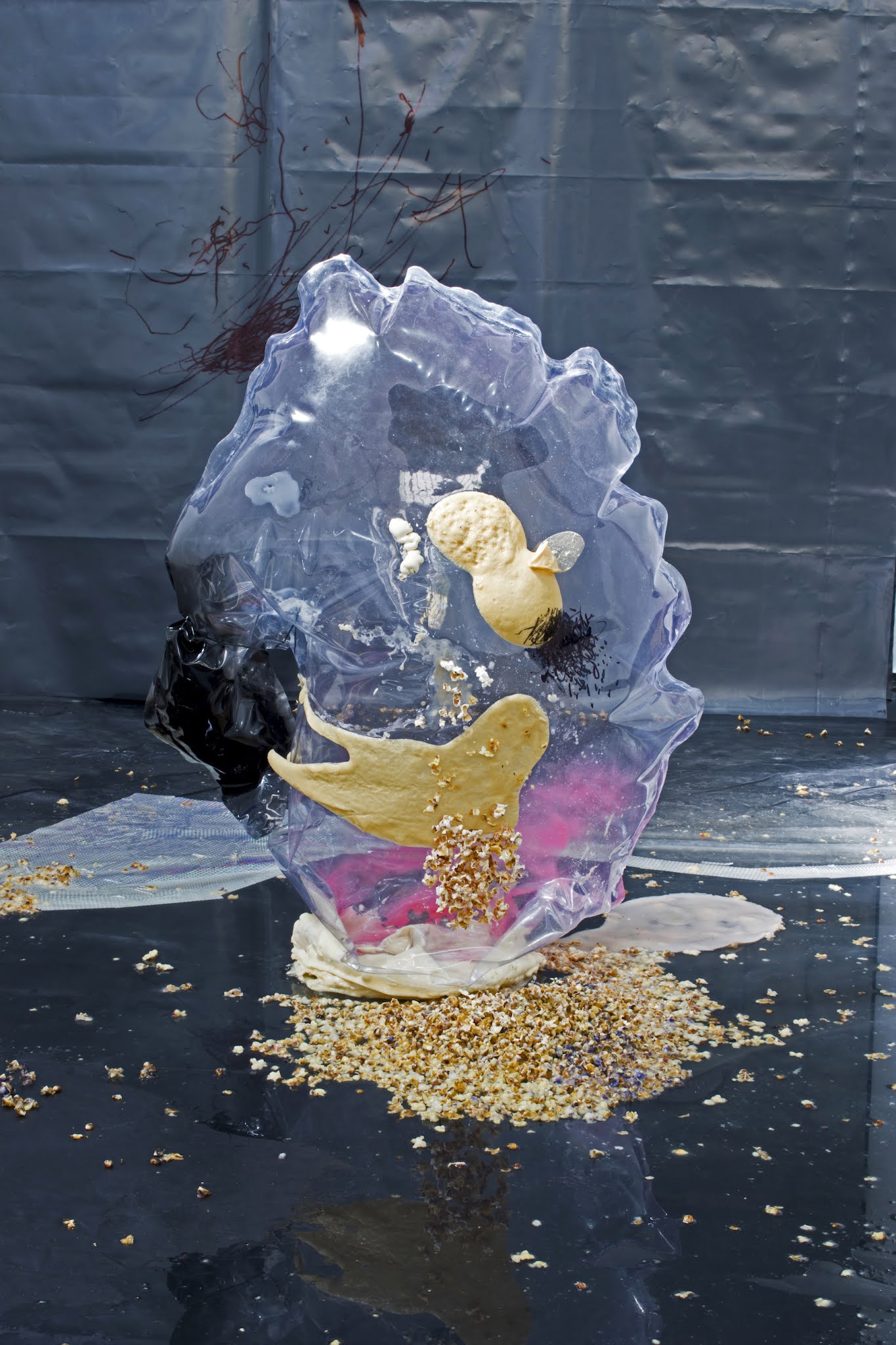 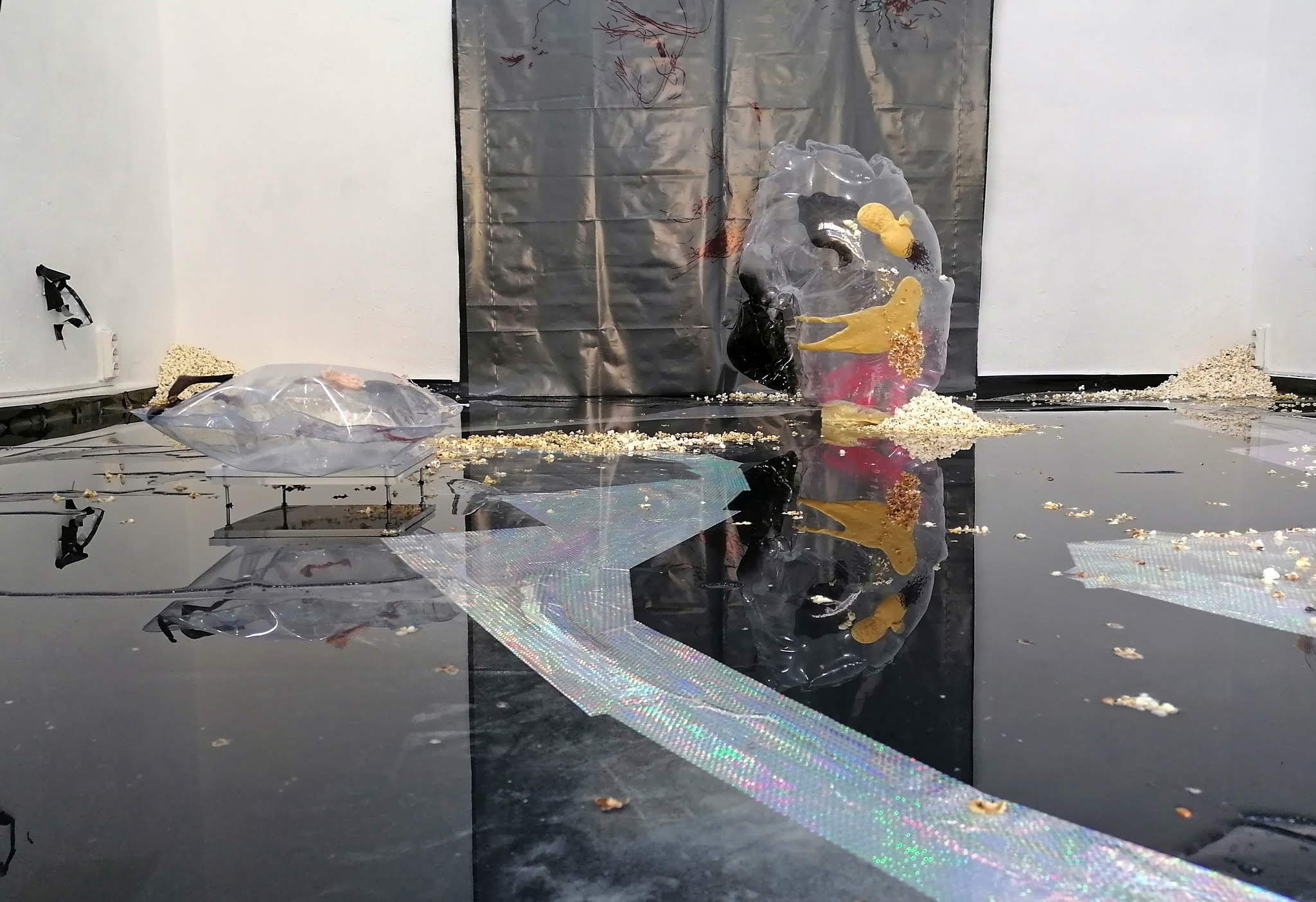 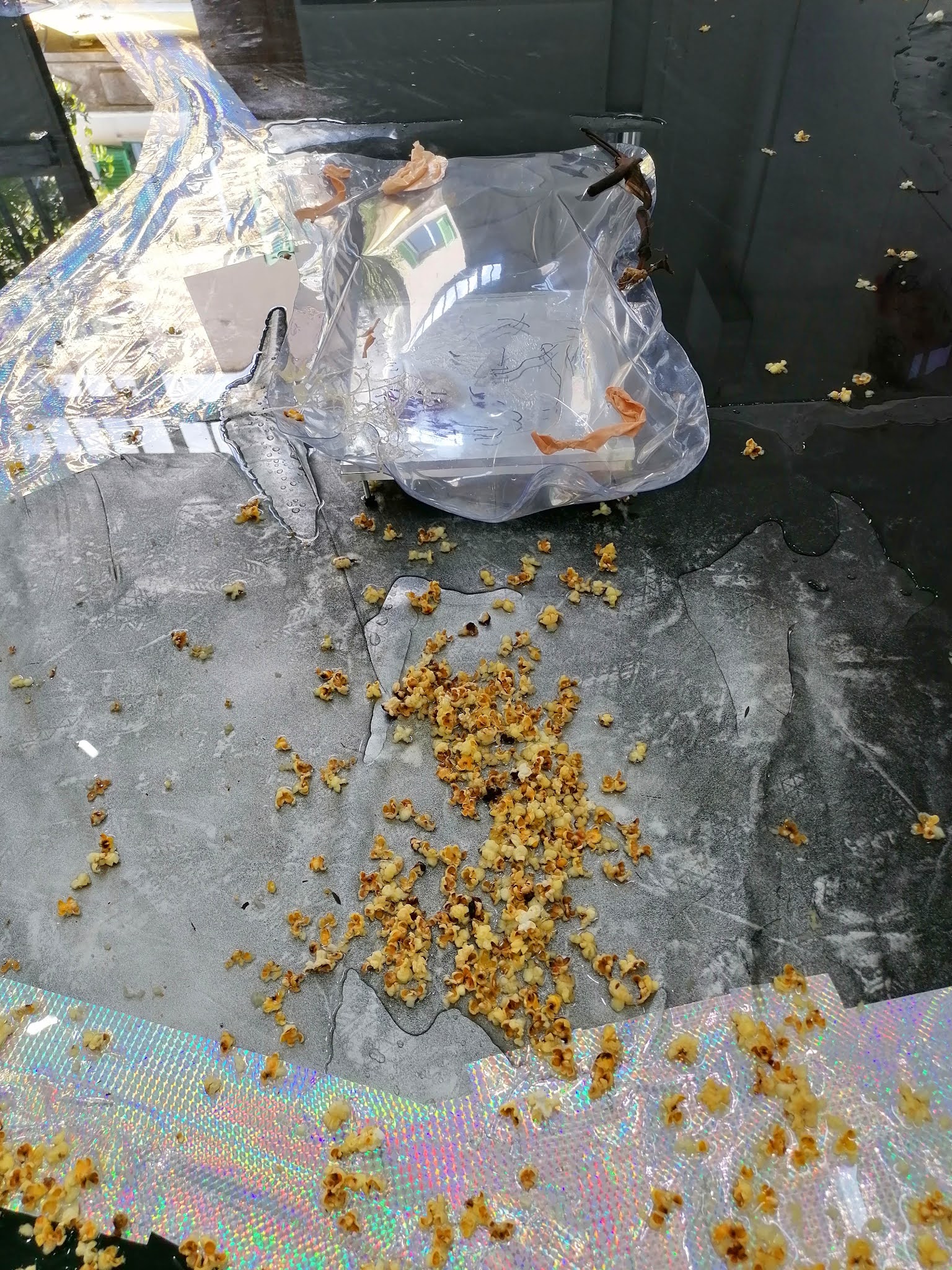 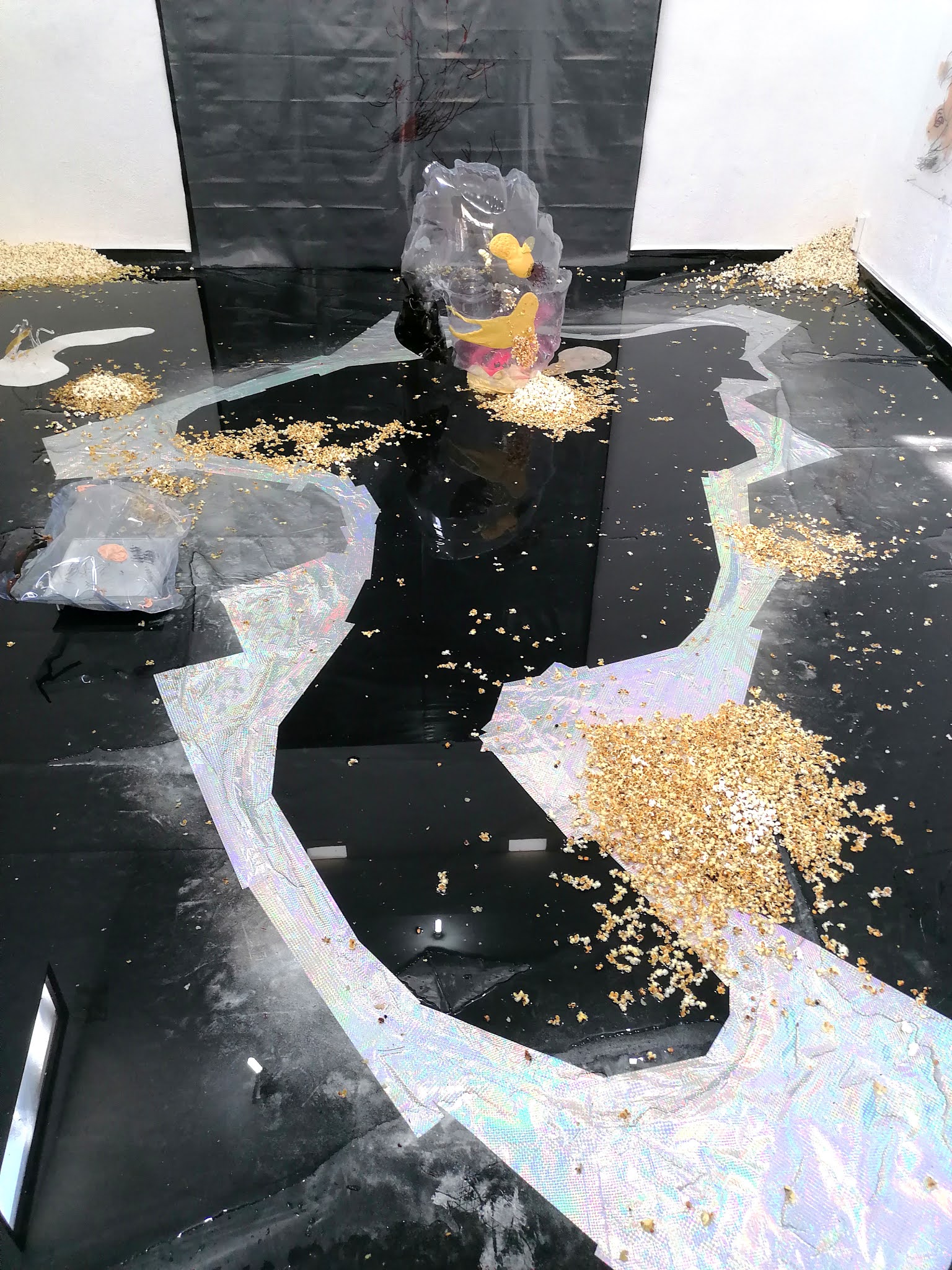 The objects you see in this exhibition register events that happened before or are yet to occur. Scattered around the floor and the wall, the sculptures evoke the traces of those encounters, the remnants of any interaction between bodies. Look at them and let yourself go with the forms, colours, textures and shines. Imagine what people or entities have been there, or what characters may occupy them but haven’t arrived just yet. Don’t feel in a rush to read this text: focus first on the objects you have in front of your eyes. In a little while, get back to the paper and keep reading.

These little ecosystems aren’t residues of physical encounters but correspond to the digital space. There might be text messages in there, emails, zoom meetings, or chats with strangers. The sculptures evoke the particles that online activity leaves once the phone is off. In the physical realm, events leave traces, not only literal tracks like stains or cracks, but also other volatile traces difficult to grasp. This explains why we experience some strange feelings when we enter our childhood bedroom, or when we smell a perfume that reminds us to a loved one. Affects are encapsulated in experiences, and these experiences accumulate as well in objects, animating them. Authors such as Sara Ahmed, Sianne Ngai or Ann Cvetkovich have written on affects moving around space and time, permeating places, people and objects. But are these volatile energies present in an already immaterial digital space?

If we want to understand the emotional detritus of digital encounters, we should focus on the very moment in which we turn the device off. Once the phone or laptop screen is off, the images and sounds that we saw there have now vanished, therefore, it seems like the ideal moment to analyse the affective conditions of the digital space. The screen’s space-time is suspended, so the episode (a chat, video or read) is in standby. We see how the main characters of the scene have disappeared, following the light of other devices nearby. But it’s striking to see that the remnants remain: little spheres of disperse and abstract information float in the space, open to any interpretation.

When I walk around Javier’s sculptures I get the feeling of entering a crime scene, thr guts of a police investigation where every object, trace, shine or transparency count as evidence of the human occupation of the digital space. The artist has imposed a blackout on digital events to see what showed up once the lights were off. It can also be seen as an exercise of media blackout by the artist, who is trying to cancel information of these encounters to reach the goal of his investigation. The inflatables have been intervened with all kinds of objects and textures. While the slim transparent structures resemble skeletons, light masses of colours stick to the plastic as dried fluids, or stuffed popcorns evidence this sudden suspension of time, in which it seems that the microwave stopped before all the grains of corn burst. Lively silhouettes meander on the floor and the wall, composing traces of the bodies that have passed by. A thin layer of water covers the surface, suspending the scene in an ethereal state, affecting all the exhibited objects with reflections.

Let yourself go by the lightness of the atmosphere and reflect on your own journey through the digital space. Think on what situations may be encapsulated in the pieces present in the space. Think on the ways your body might be represented in every roughness, crease or transparency.