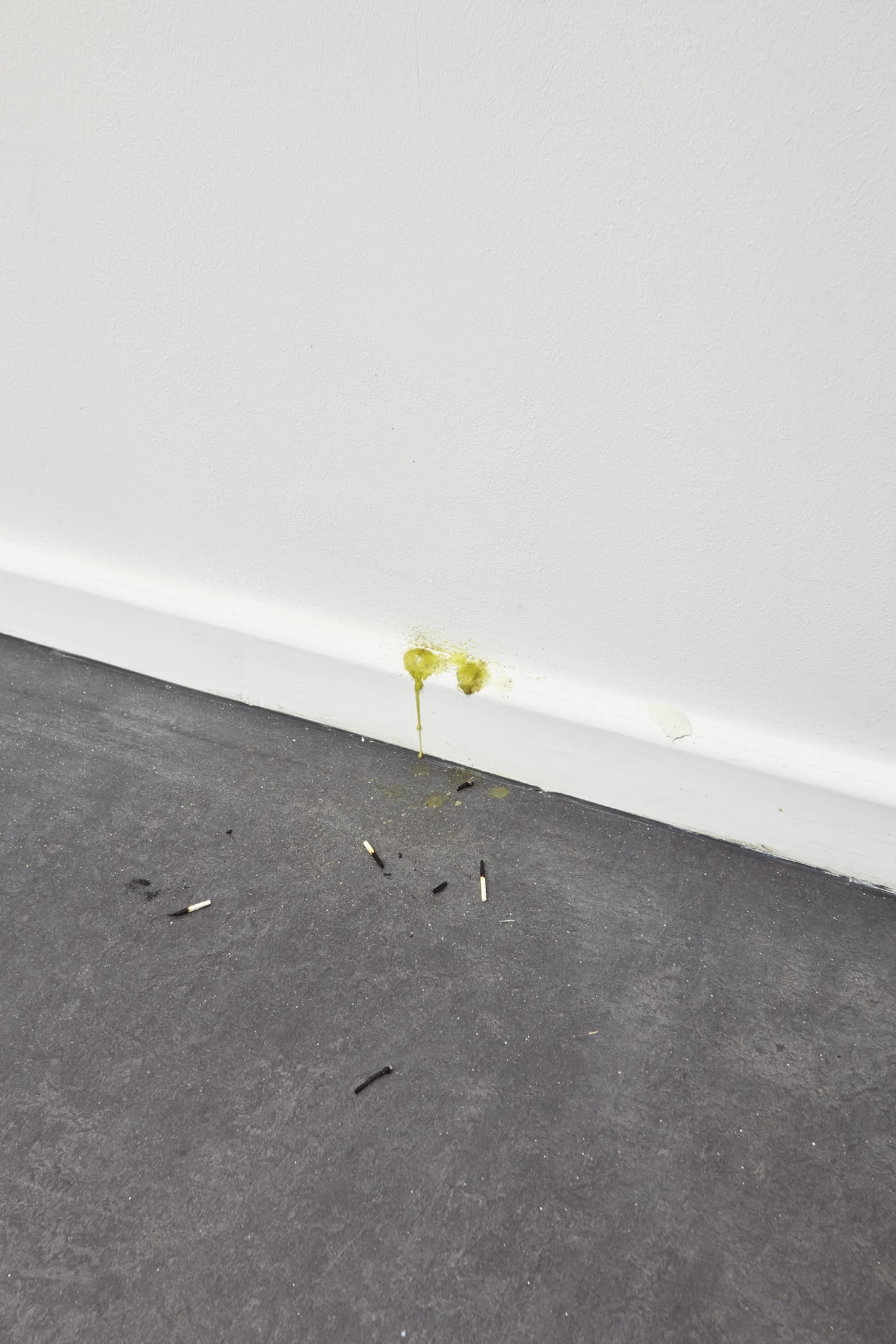 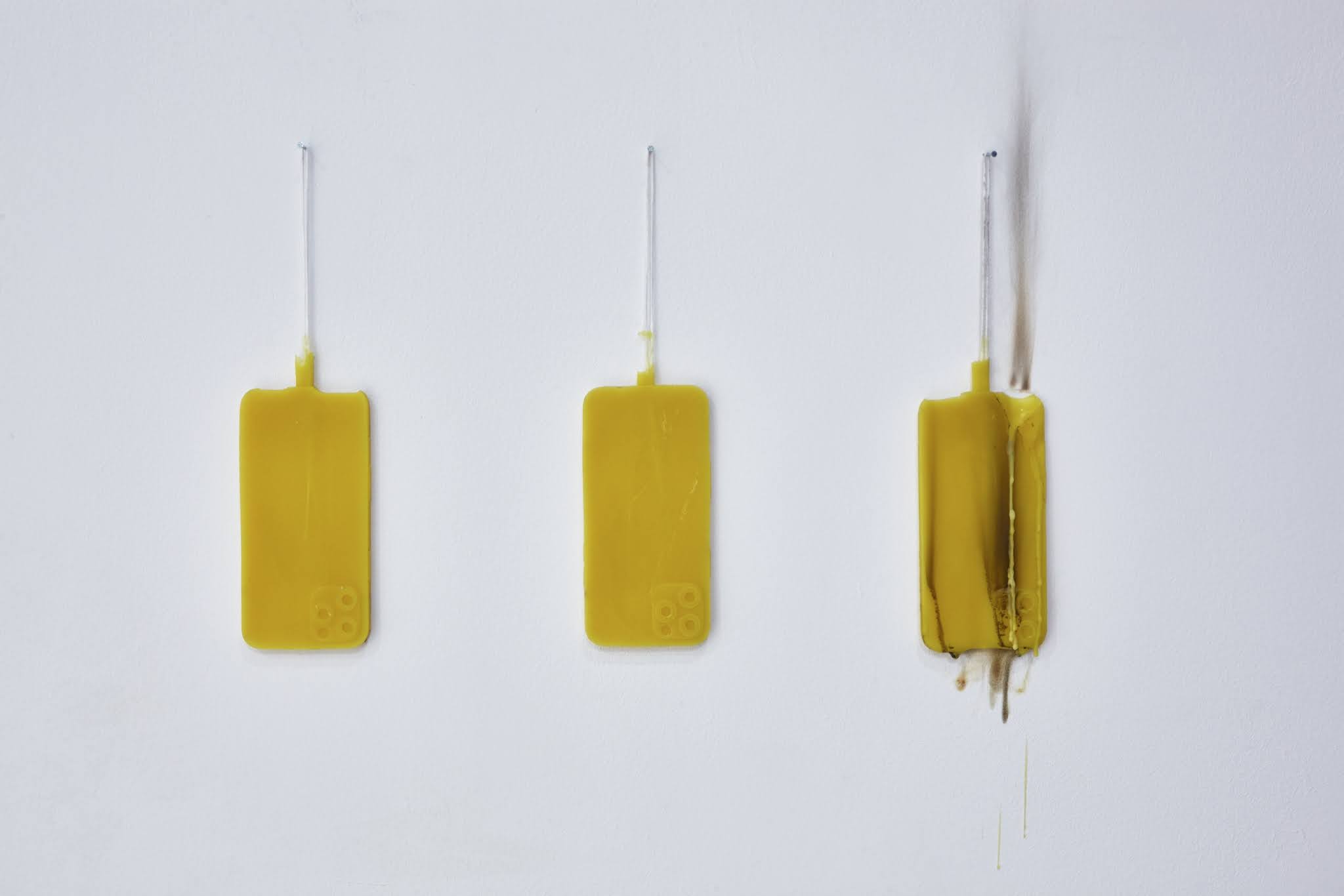 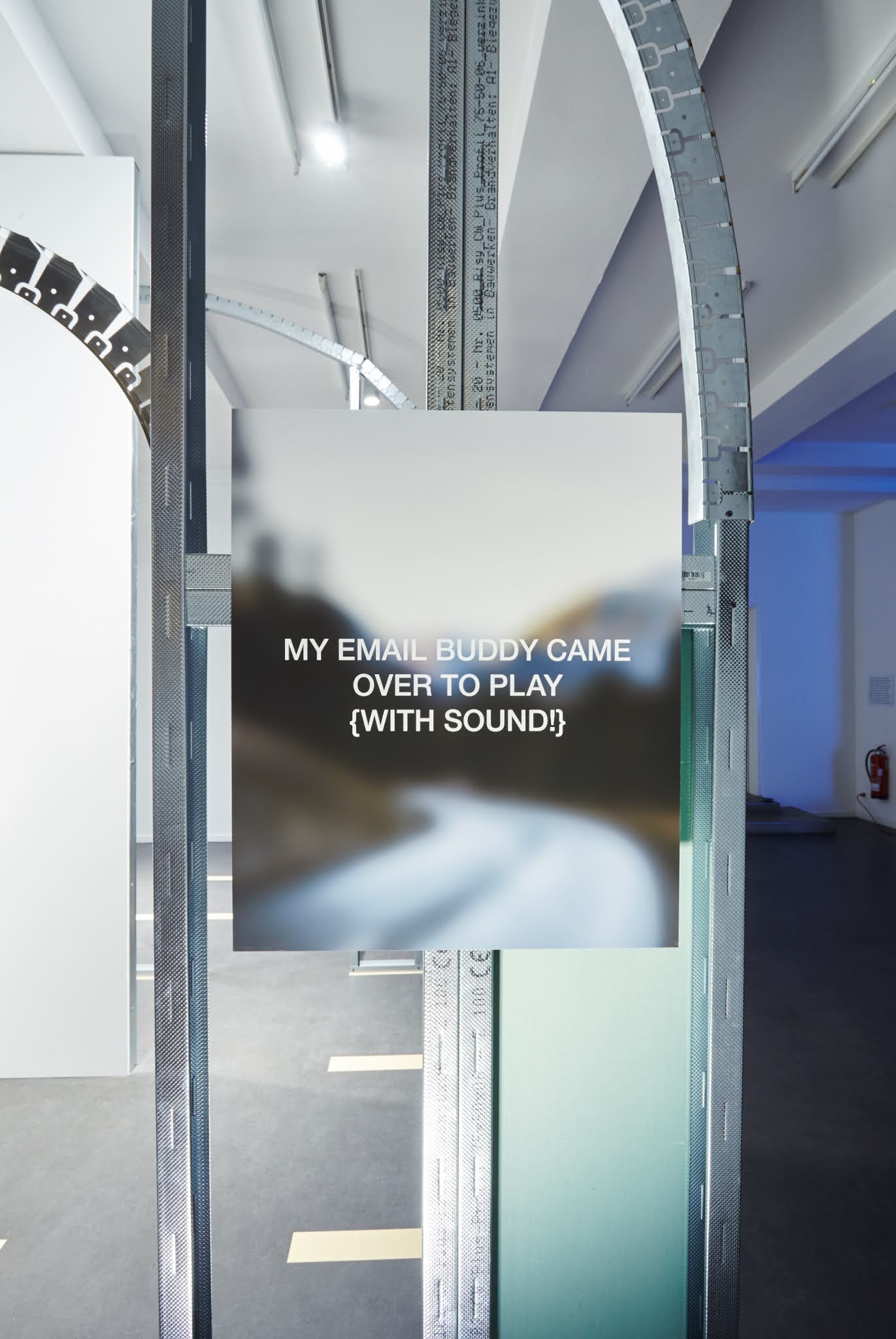 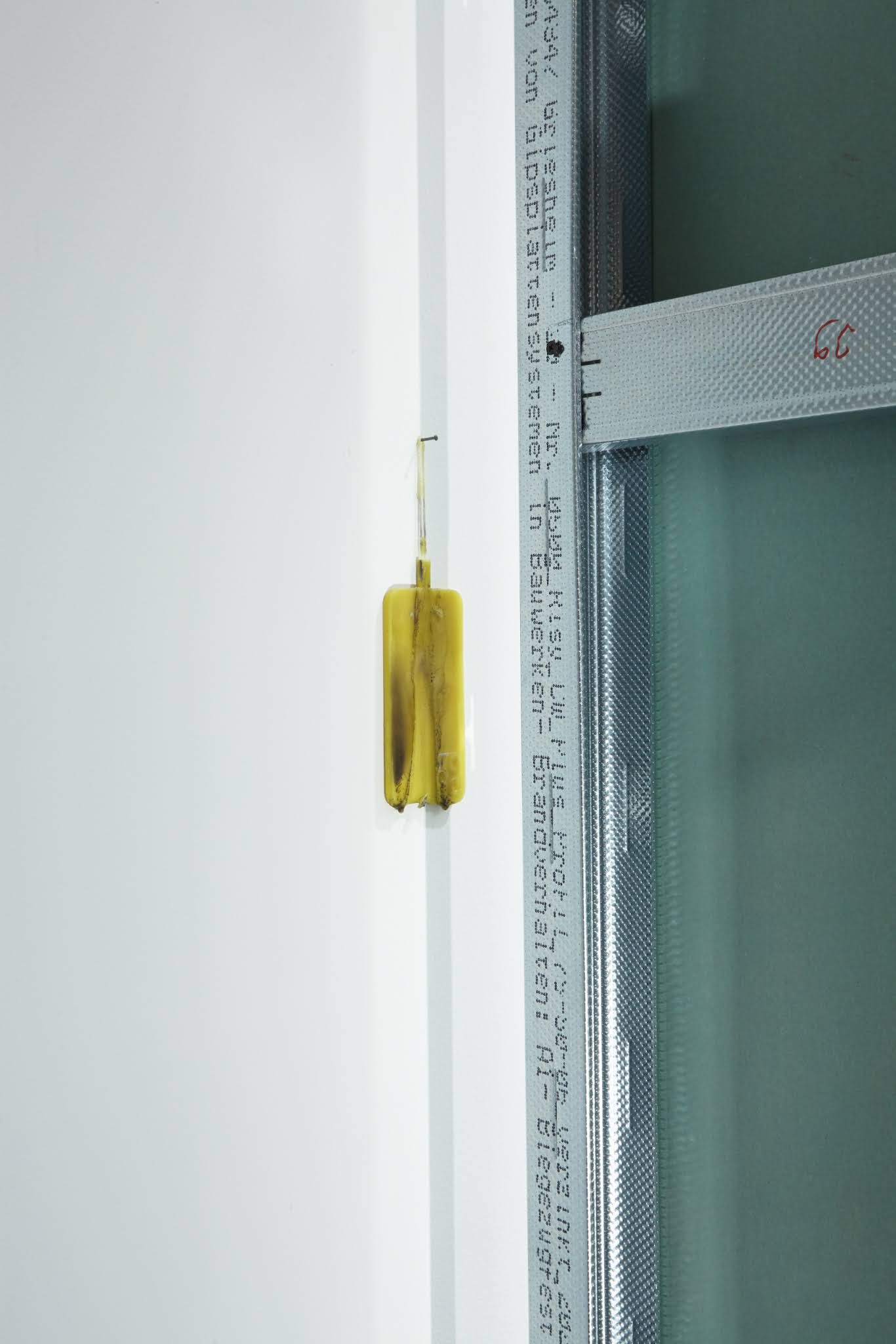 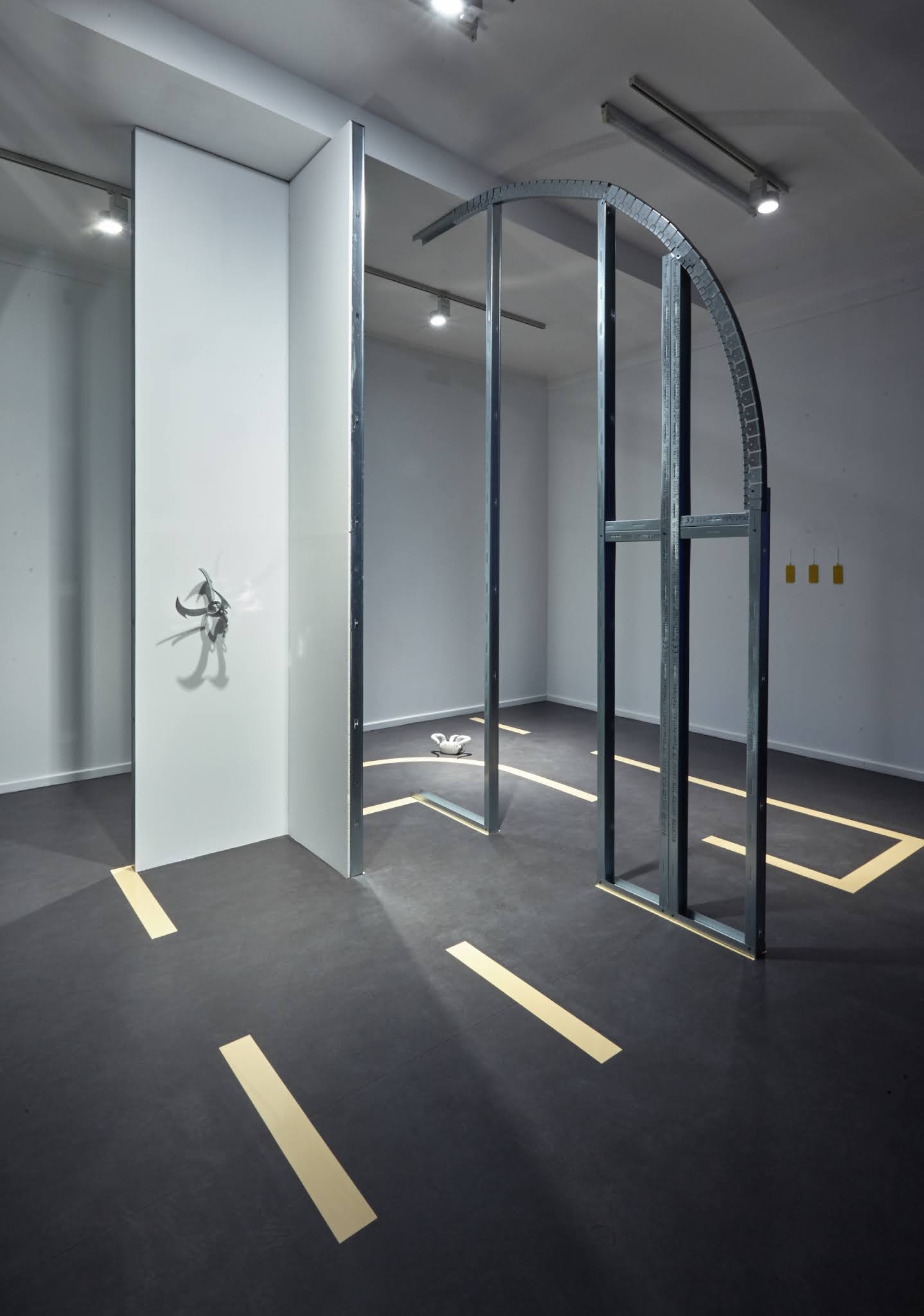 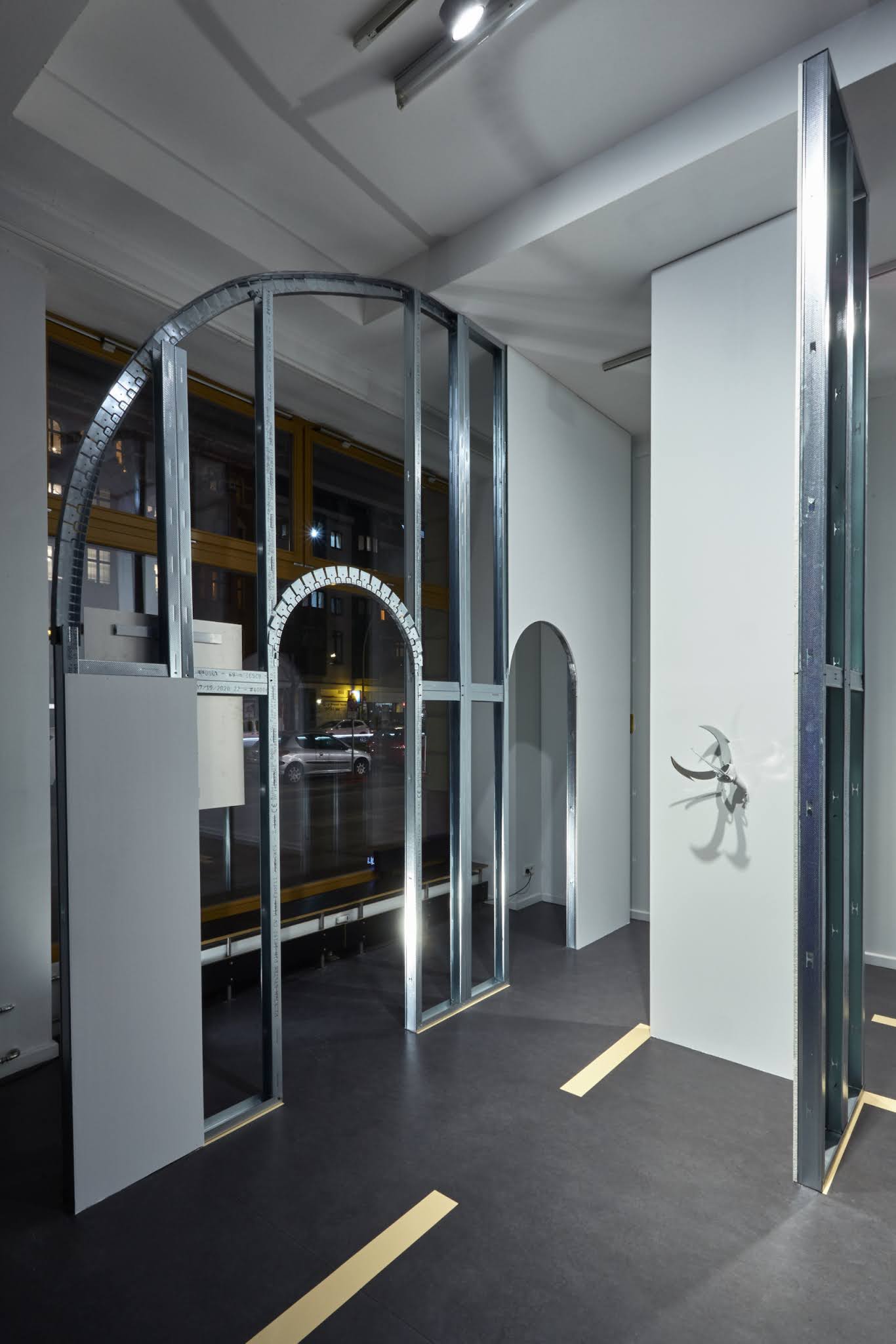 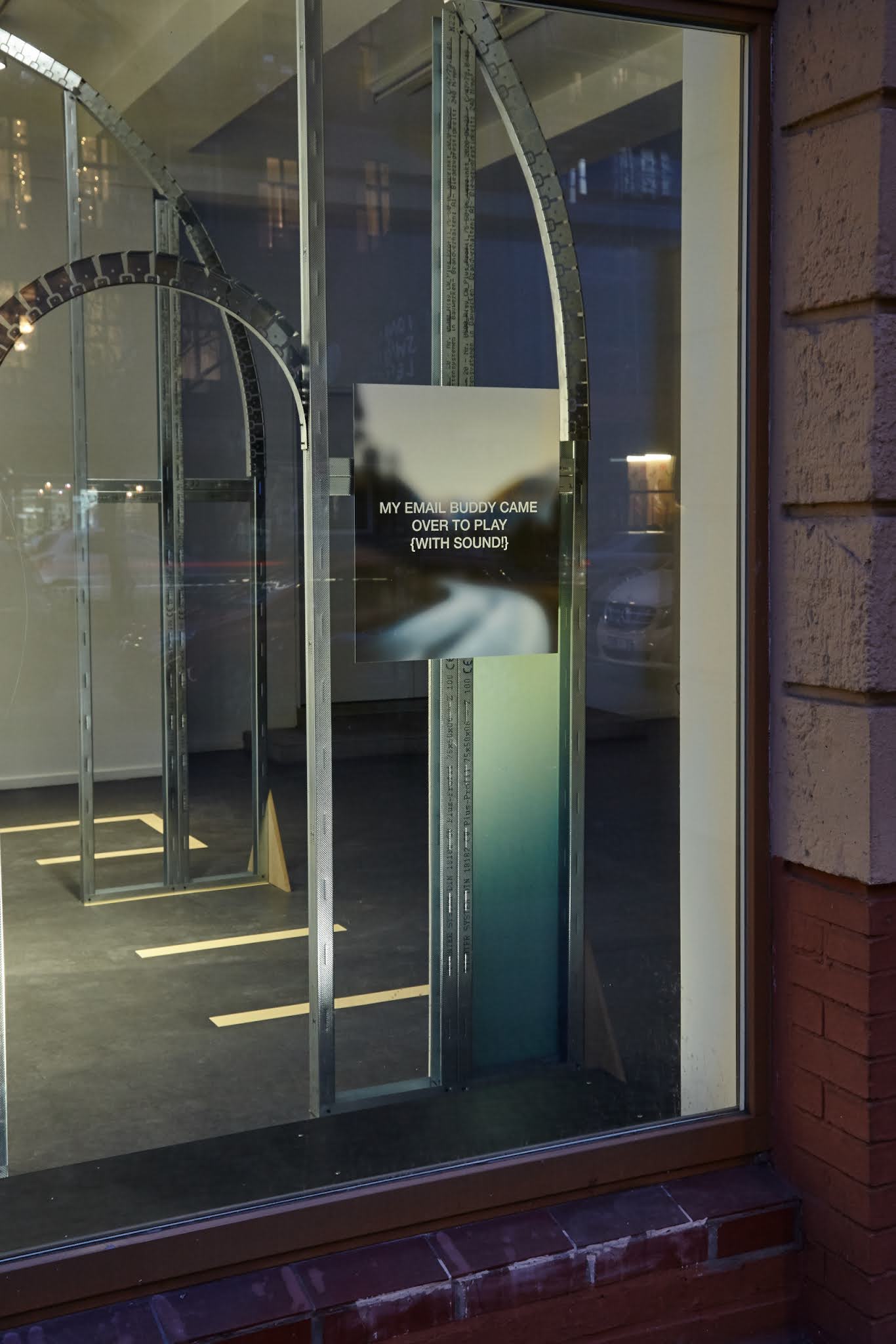 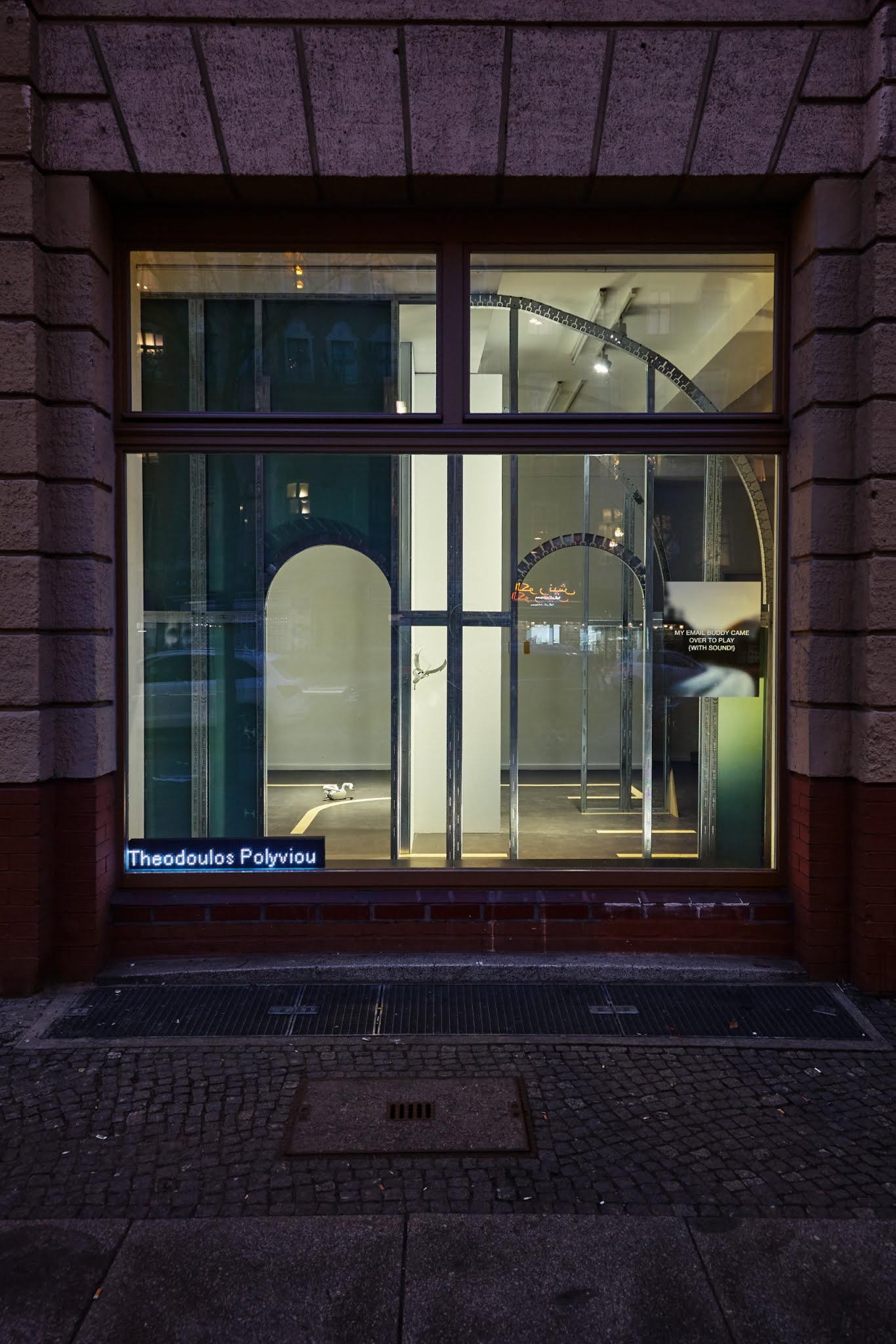 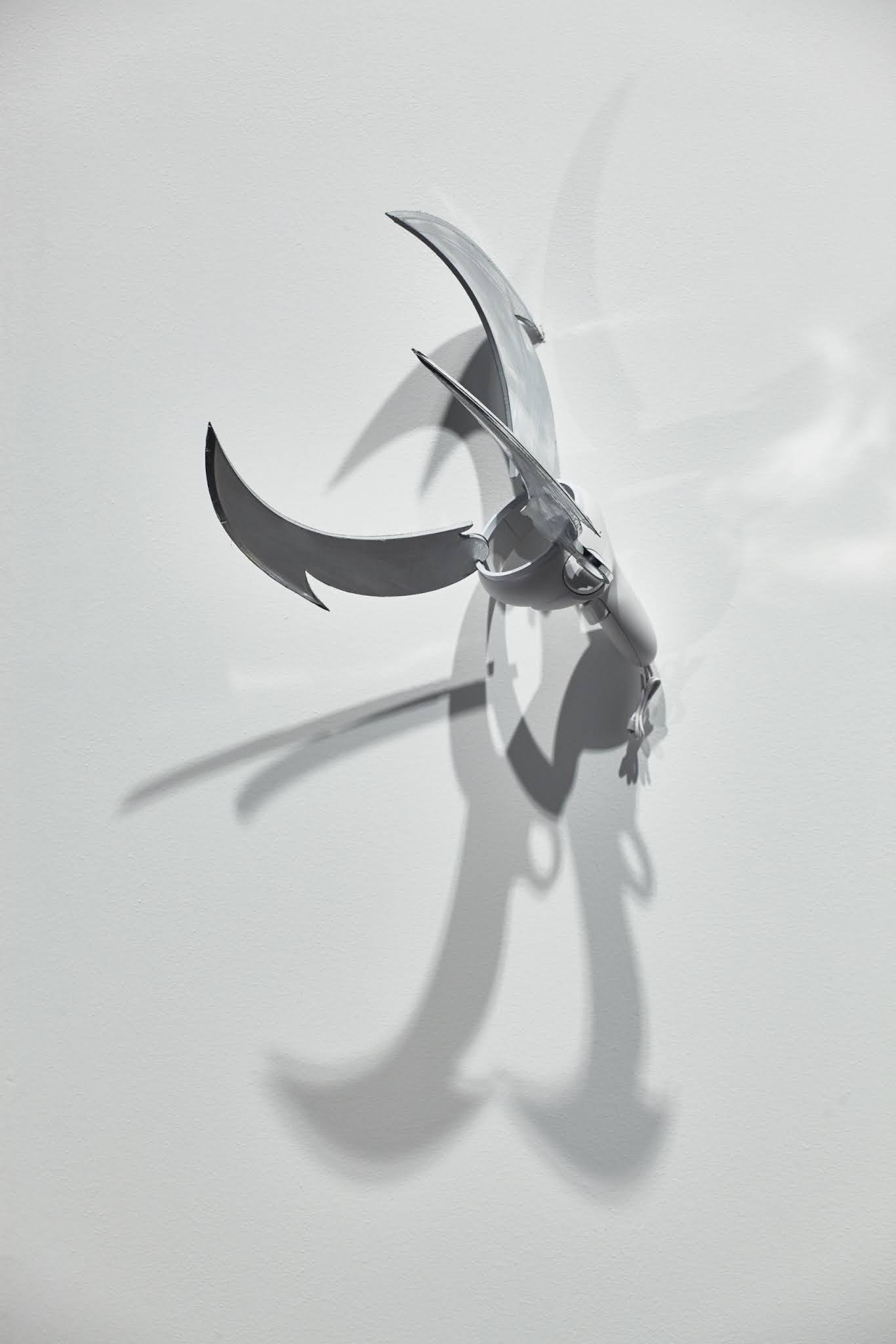 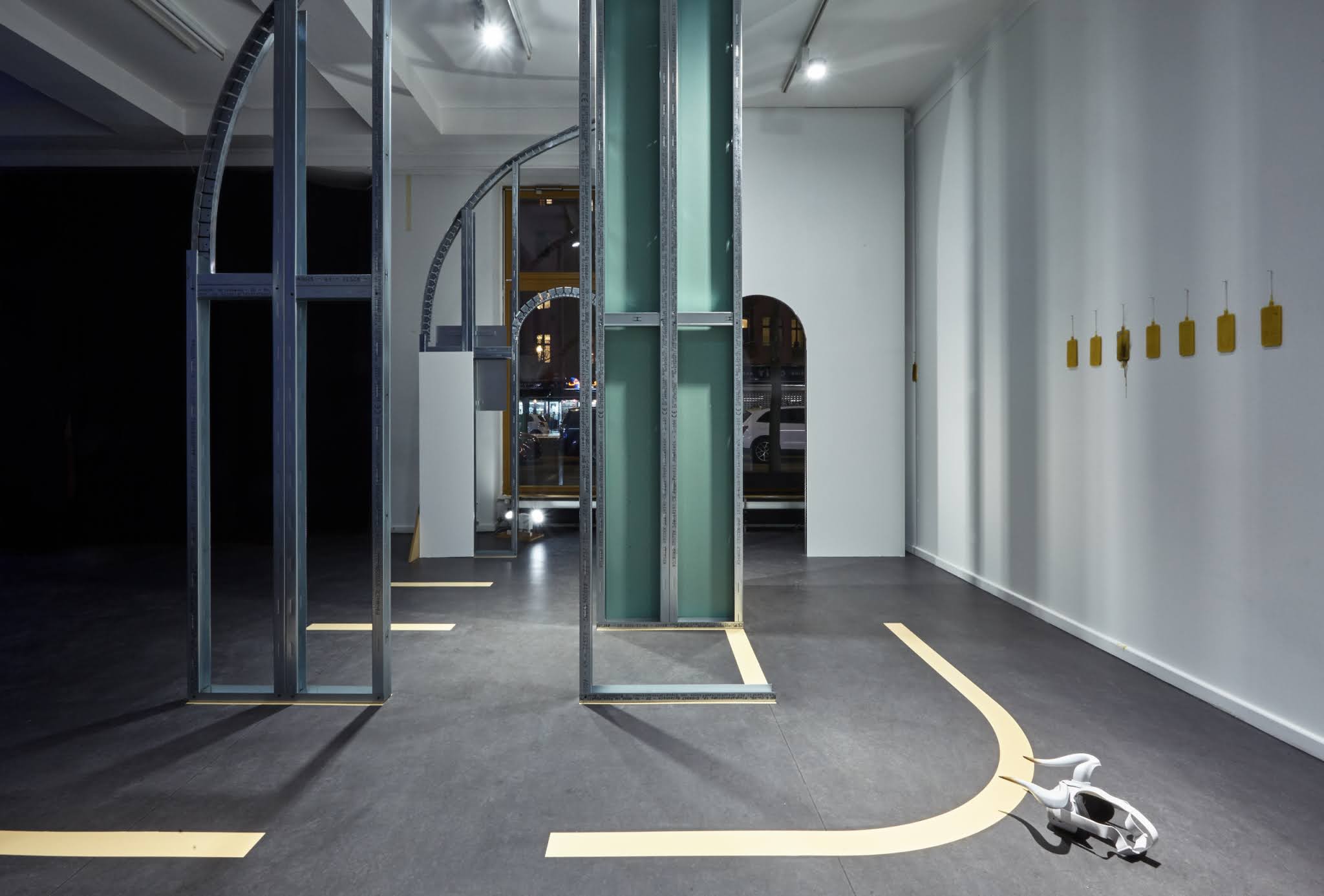 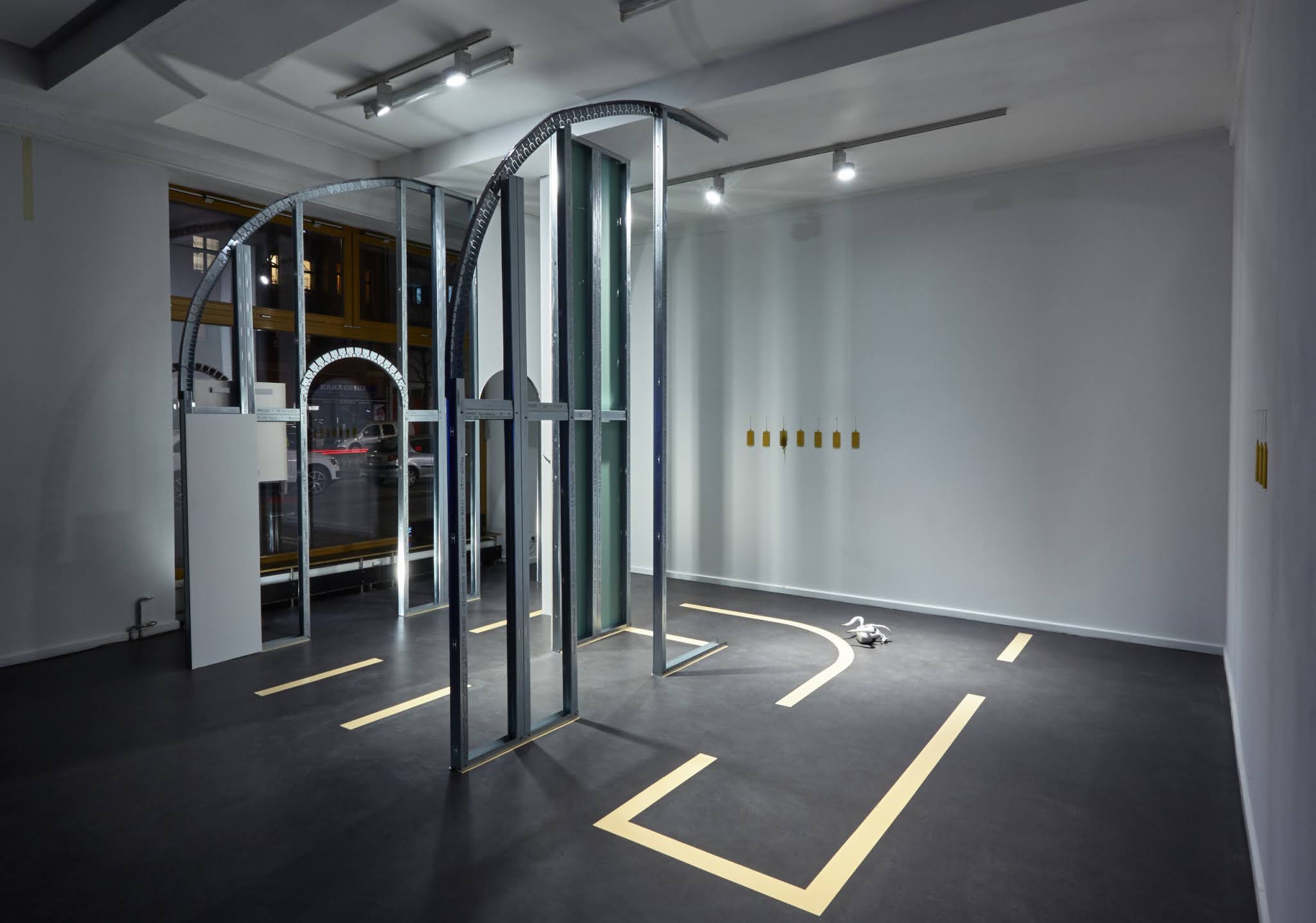 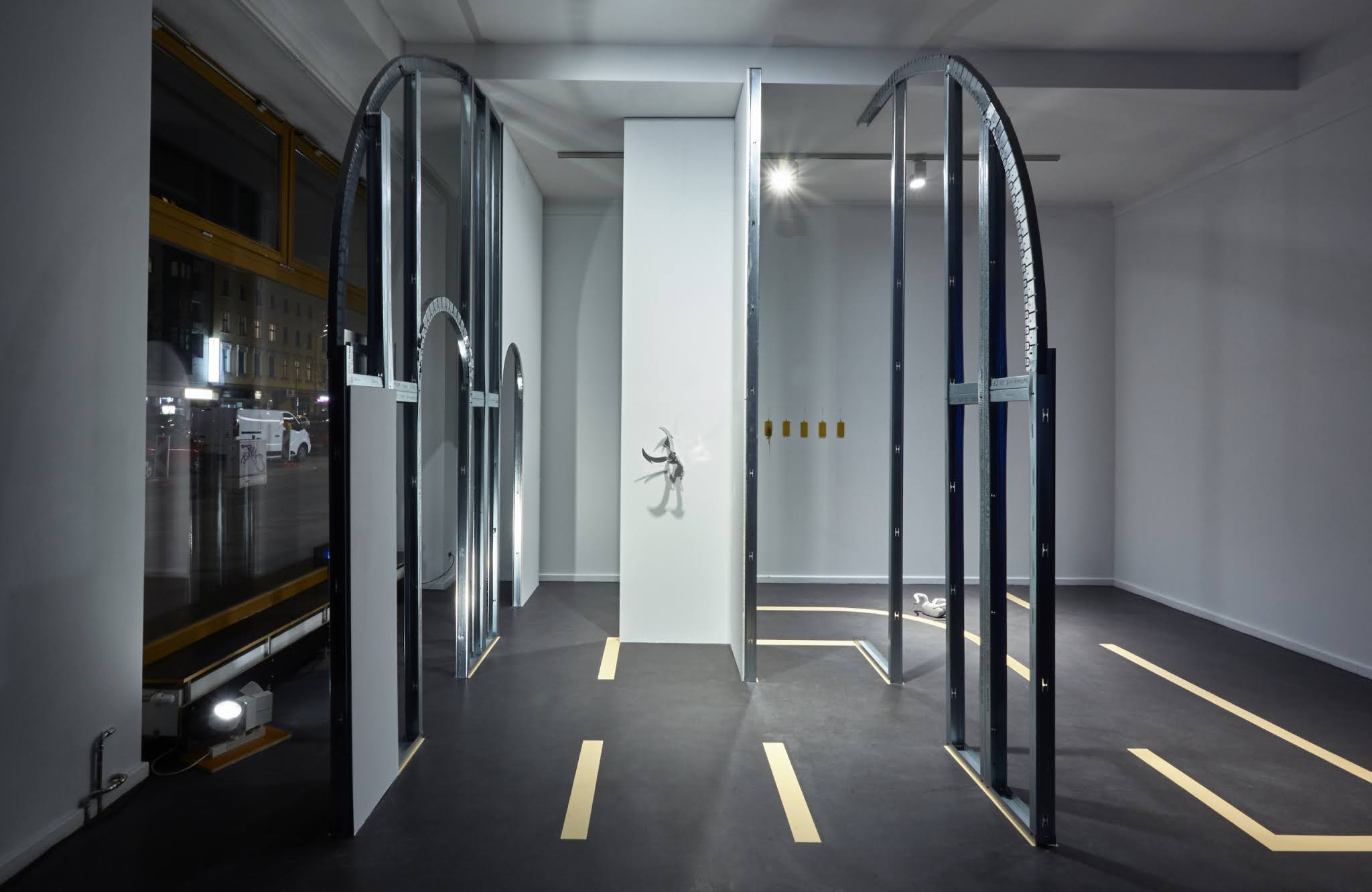 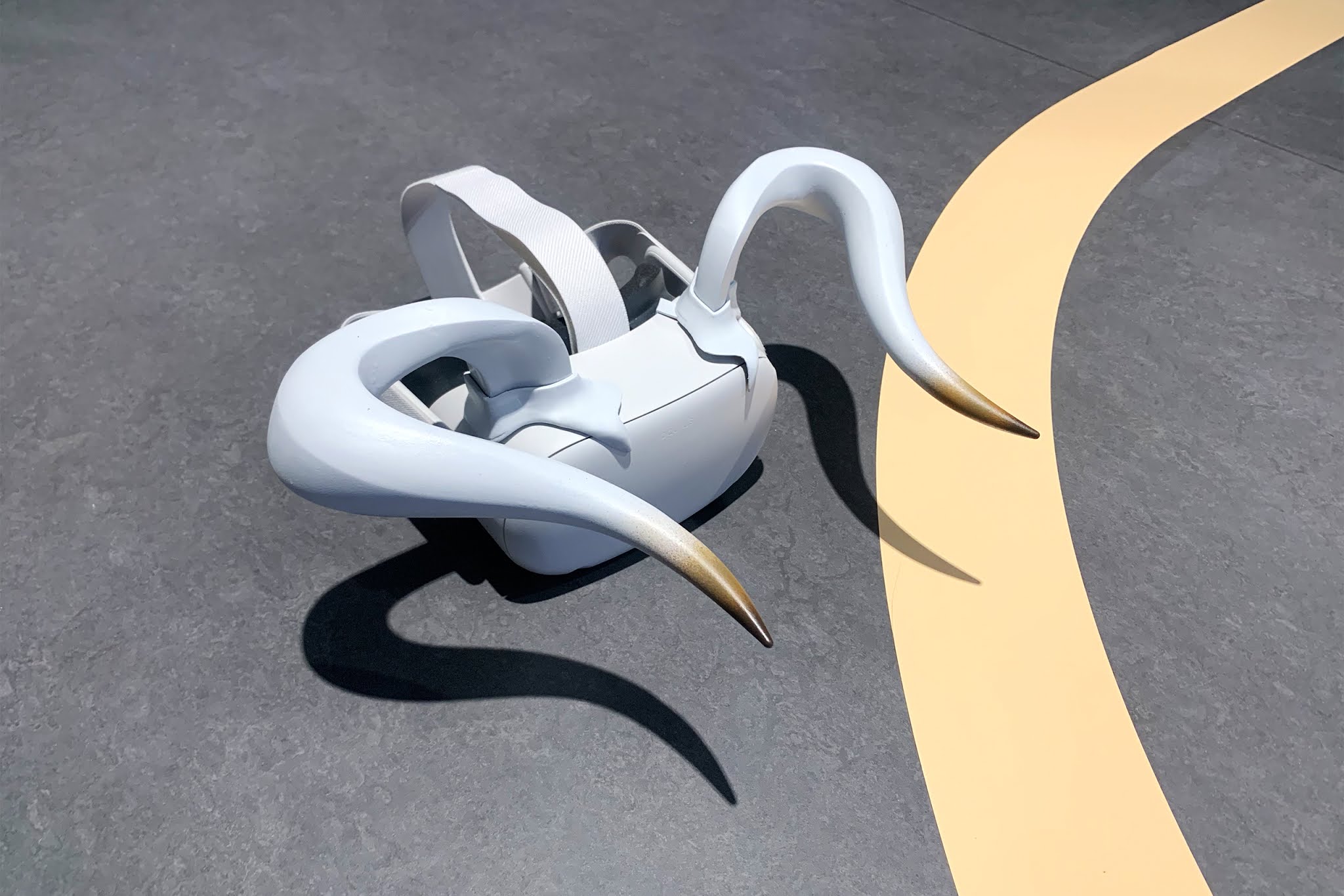 In landscape architecture, “Desire Lines” are the imprints of illicit paths that emerge when predetermined patterns of movement are not adhered to and spaces are accessed contrary to their planning. Planned lines start from conventional navigation methods that become inscribed in everyday life over time through repetitions of norms and rituals. To deviate from these lines is to become disoriented.

With Post Impalpable Rites, Theo & Daki celebrate a divorce from the virtual reality that populates our private and public spaces. Visitors currently experience and develop “Desire Lines” mainly digitally, with body extensions such as their smartphones. In the window front of Künstlerhaus Bethanien, the artists transform an architecture that was once constructed virtually but is now brought into the exhibition space in real terms. The structure represents the already built part of a building, a future space and at the same time the outline of a ruin from the past.

Ex Votos and mythologised VR headsets and controllers that have become sculpture inhabit the space. Ex Votos are objects that are publicly offered as symbolic sacrifices based on a vow, often at a cultic site and especially for rescue from an emergency. Iphone Votos, pressed from beeswax, hang from the exhibition structure in the sense of an extension of the body. Arguably the most used digital body parts recently used to create and navigate new spaces, they blur into the real and carry precious personal moments from Theo’s studio. They are ceremonially burned at the end of the exhibition, a practice that traditionally promises the salvation of the body part mirrored in the form. The VR glasses with installed horns, which have become a sculpture, are reminiscent of the Minotaur in the Labyrinth, Pan and other chimeras of Greek mythology. A technologised future representing the virtual meets queer ideas of the body that are historically flooded with transformative elements in sagas and myths.

The disciples of Pythagoras saw a celestial component in certain choreographies and rhythmic movements where one could connect not only to the earth but also to a higher power such as the movement of the planets. Alchemists, witches and Sufis also made connections between the earth, energy and dance. Many cultures ascribe spiritual significance to vortex-like dances that produce an extreme high or otherworldly trance state.

In front of the window of the Künstlerhaus, which as a liminal membrane marks the new borders created by the pandemic, visitors are invited to contextualise their choereographies, and to allow being lost, even to vorcate, to walk “Desire Lines”. Technology is a dominant factor in the commodification of sexuality and intimacy and the privatisation of desire, and at the same time has the potential to reconnect bodies, rituals and spaces and create liminal states.

In response to the invitation of the Cypriot Pavilion at the Venice Architecture Biennale 2021, Theo & Daki developed a site-specific virtual structure that is here partially brought into the physical space at Künstlerhaus Bethanien. The Biennale is entitled “How will we live together?” As one possible perspective, the artists engage in intentional mutations, new paths until the state of disorientation and being lost can become a state of meditation.

Lines are both created by being followed and followed by being created. Sara Ahmed
Appointments can be made with Theodoulos Polyviou and Carola Uehlken during the course of the exhibition. If you are interested and for more information, please contact uehlken@bethanien.de.
About the artists:
Theodoulos Polyviou’s work is concerned with the digital, invisible body and investigates ways in which perceptions of reality can be vastly altered by what is not been seen, defining the unseen as matter with agency. By focusing on the architectural narratives that outline queer spaces, Theodoulos investigates the different ways in which politics and social structures necessitating geographical specificity, translate digitally to produce political disorganisation and discussion and in doing so challenge conception of borders and boundaries.
Dakis Panayiotou comes from an architecture background. His work reveals fictional spaces situated in fantastical collided environments, a variegation of Cypriot and imagined landscapes. Within these virtual worlds, spatial and temporal situations occur, seemingly incompatible sites are juxtaposed, deceiving the viewer through their Heterotopic qualities. By acknowledging the historical social structures inscribed in the production of space, Daki’s work expresses the possibility of geopolitical multiplicities.
Theo & Daki have been working together for the past two years. The duo is interested in site-specific responses to space and the exploration of open forms of audience participation. Ritual, ideology and architecture are displaced and analysed in order to be able to create formulations about selfhood and desire.
Tags Berlin, Carola Uehlken, Dakis Panayiotou, Künstlerhaus Bethanien, Lazy exhibitions, Theodoulos Polyviou