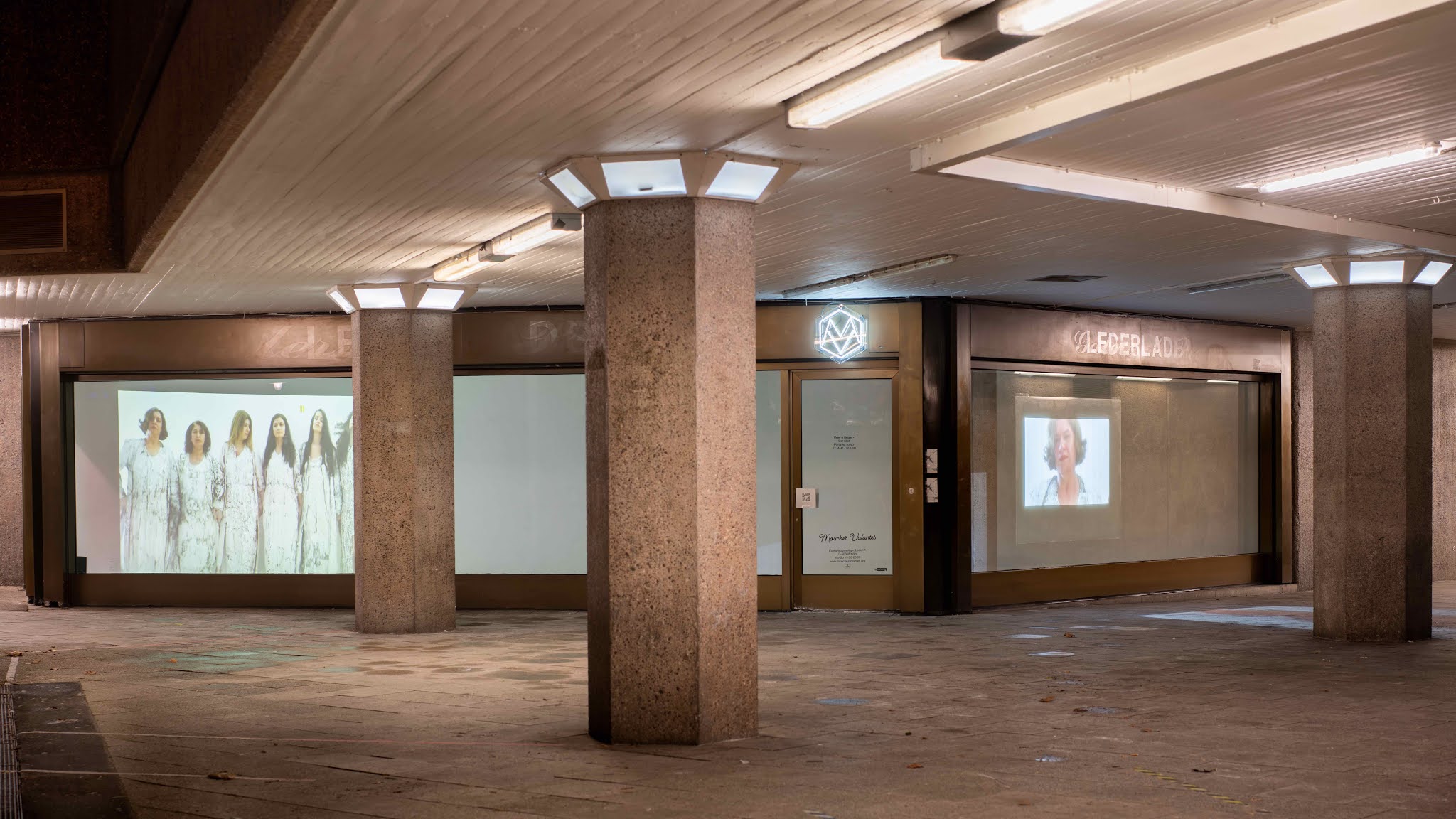 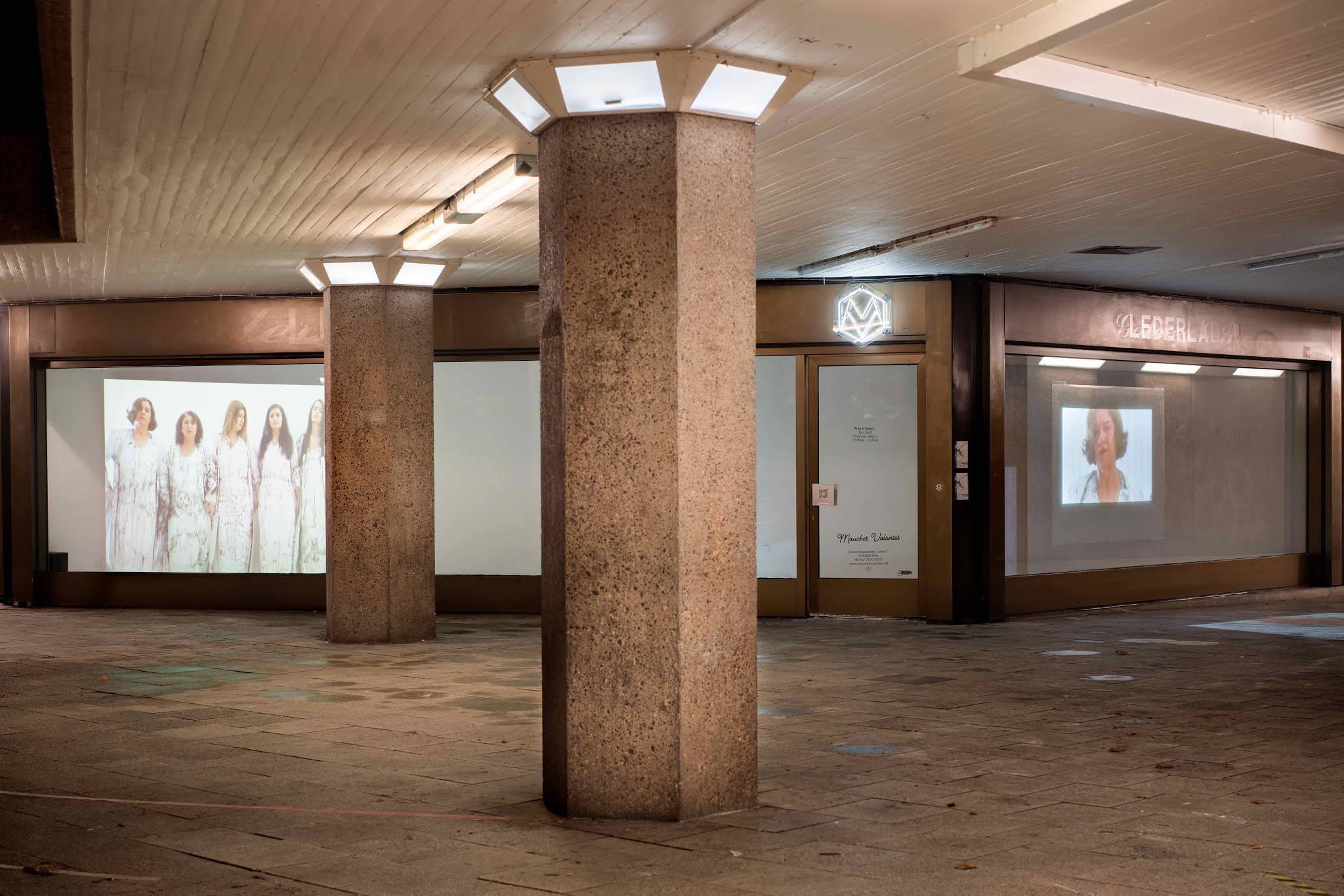 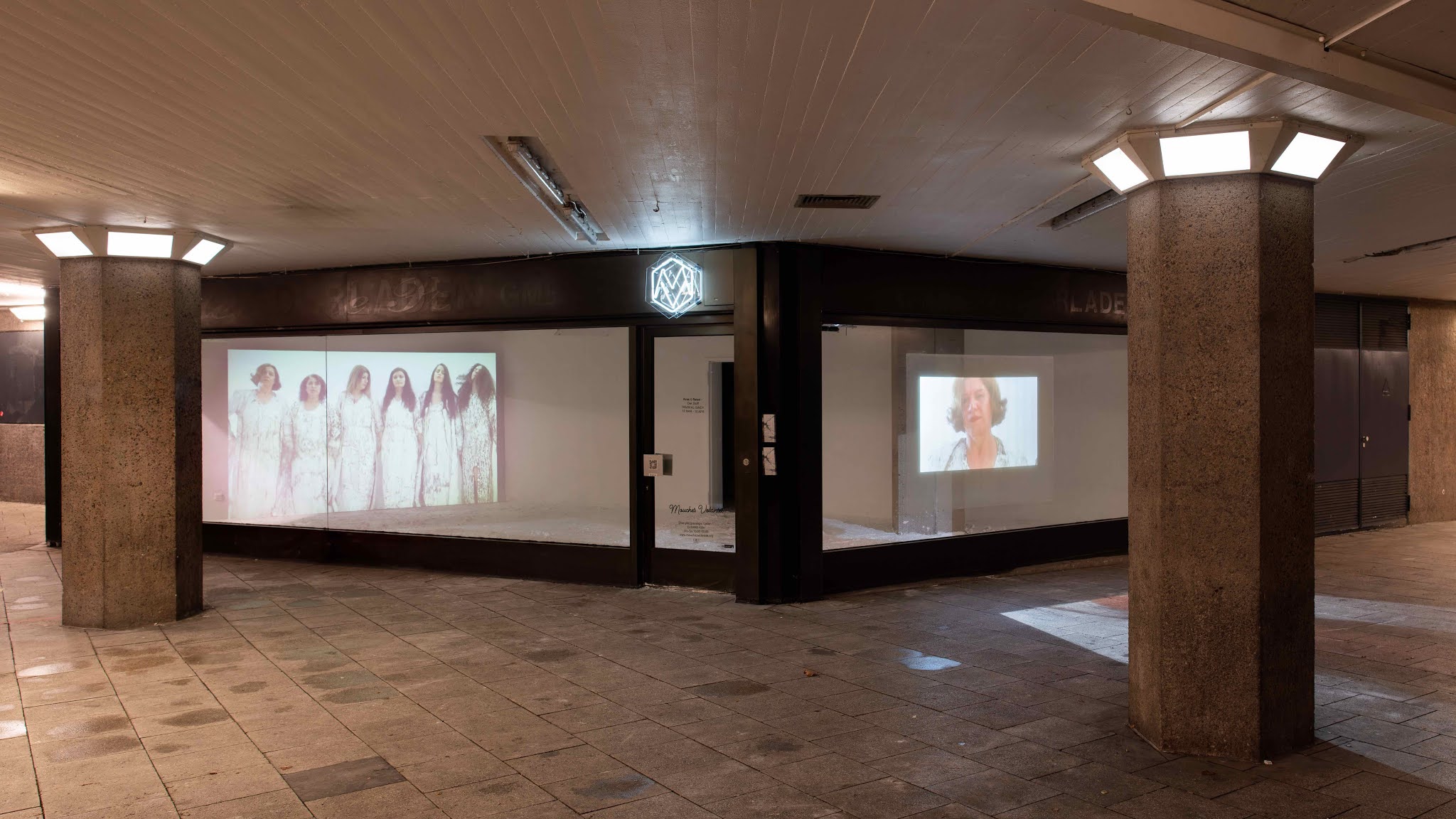 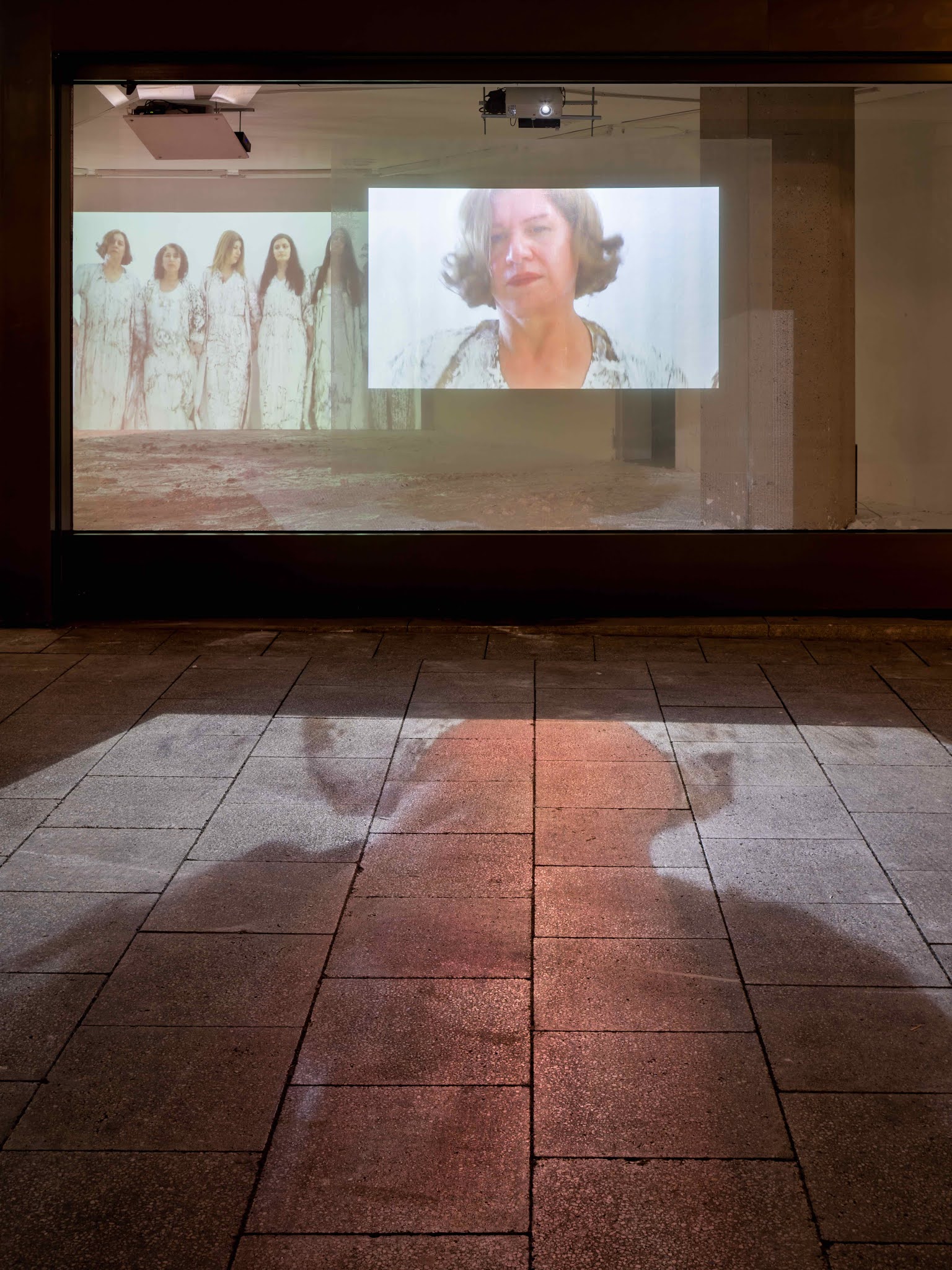 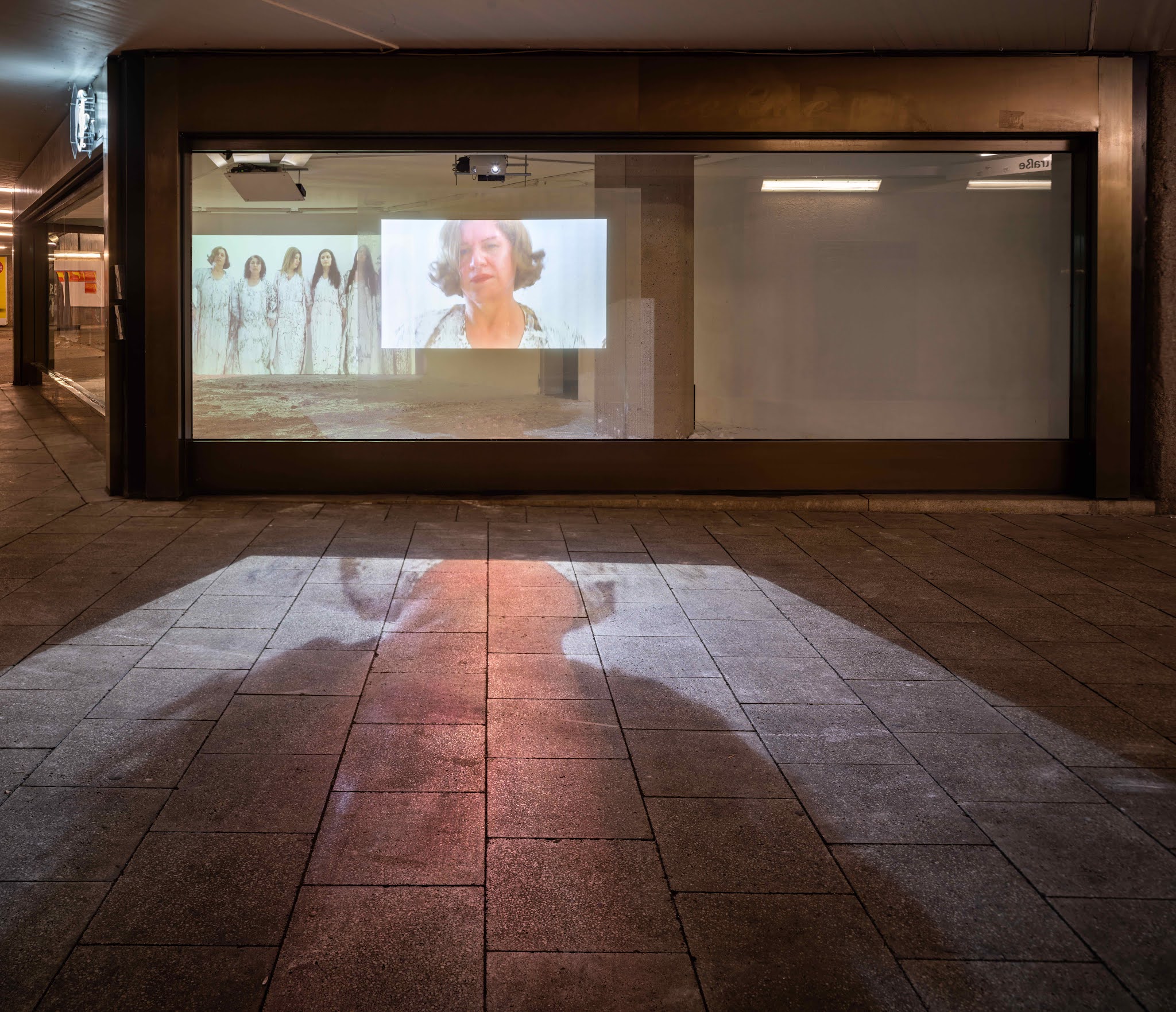 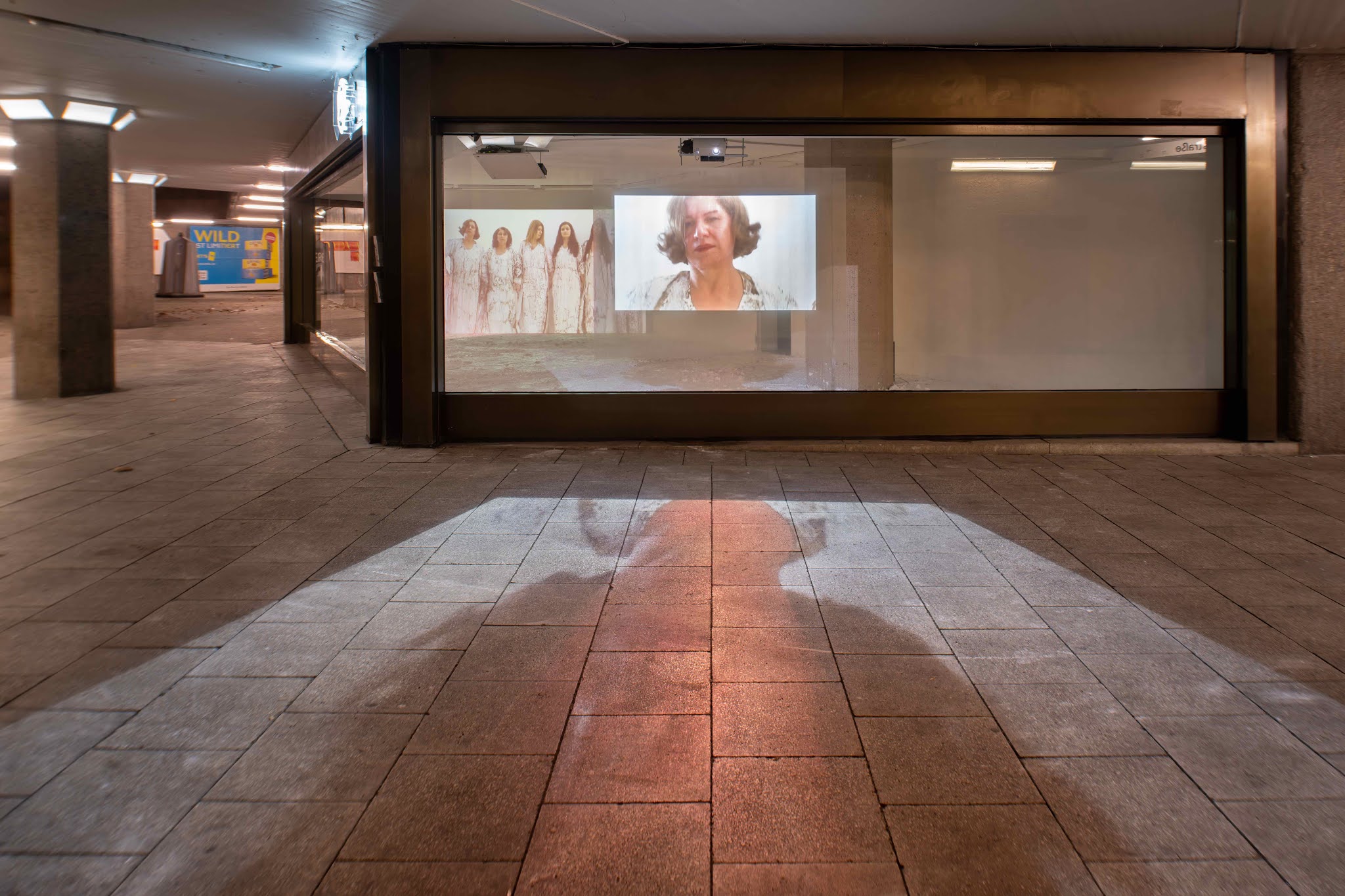 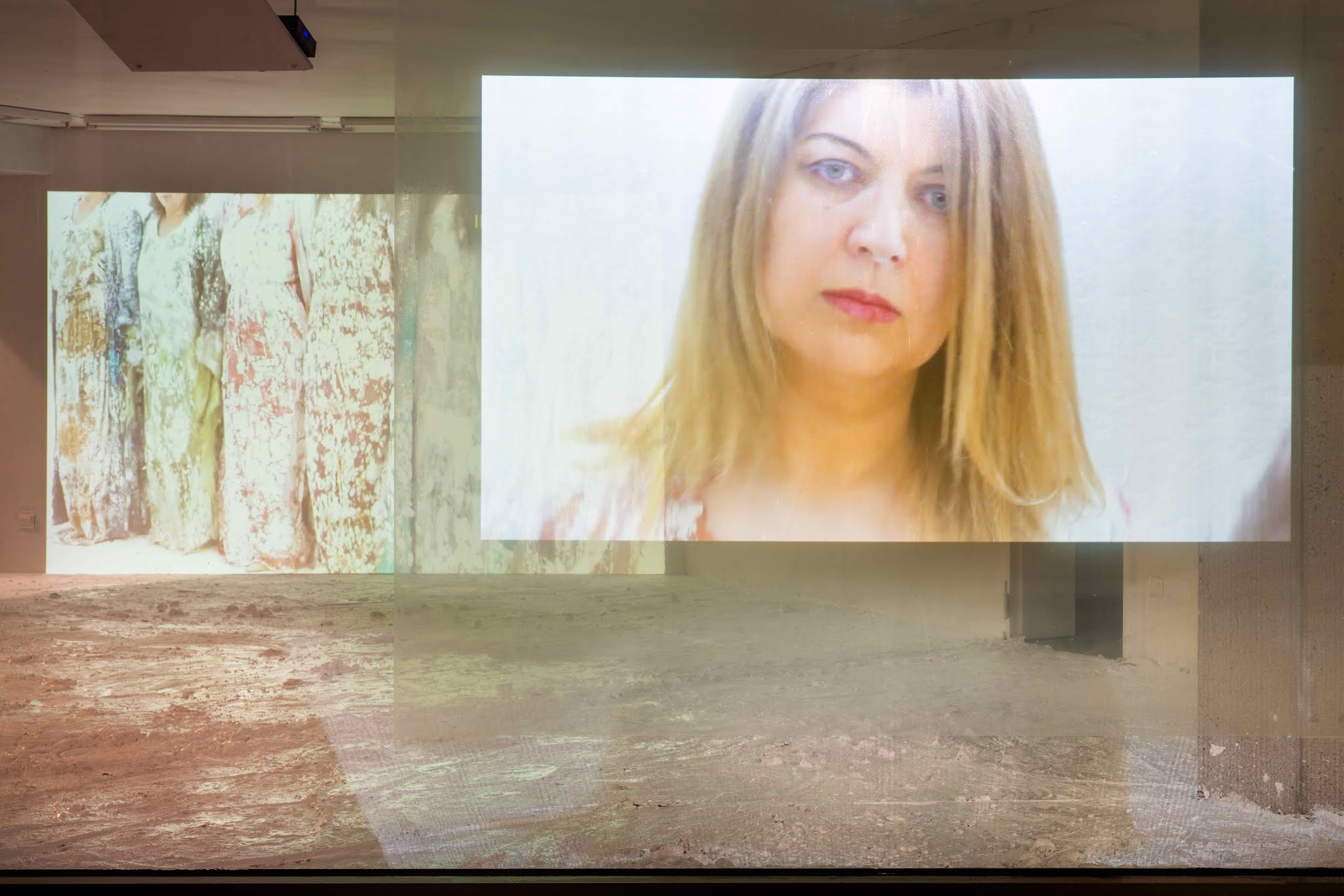 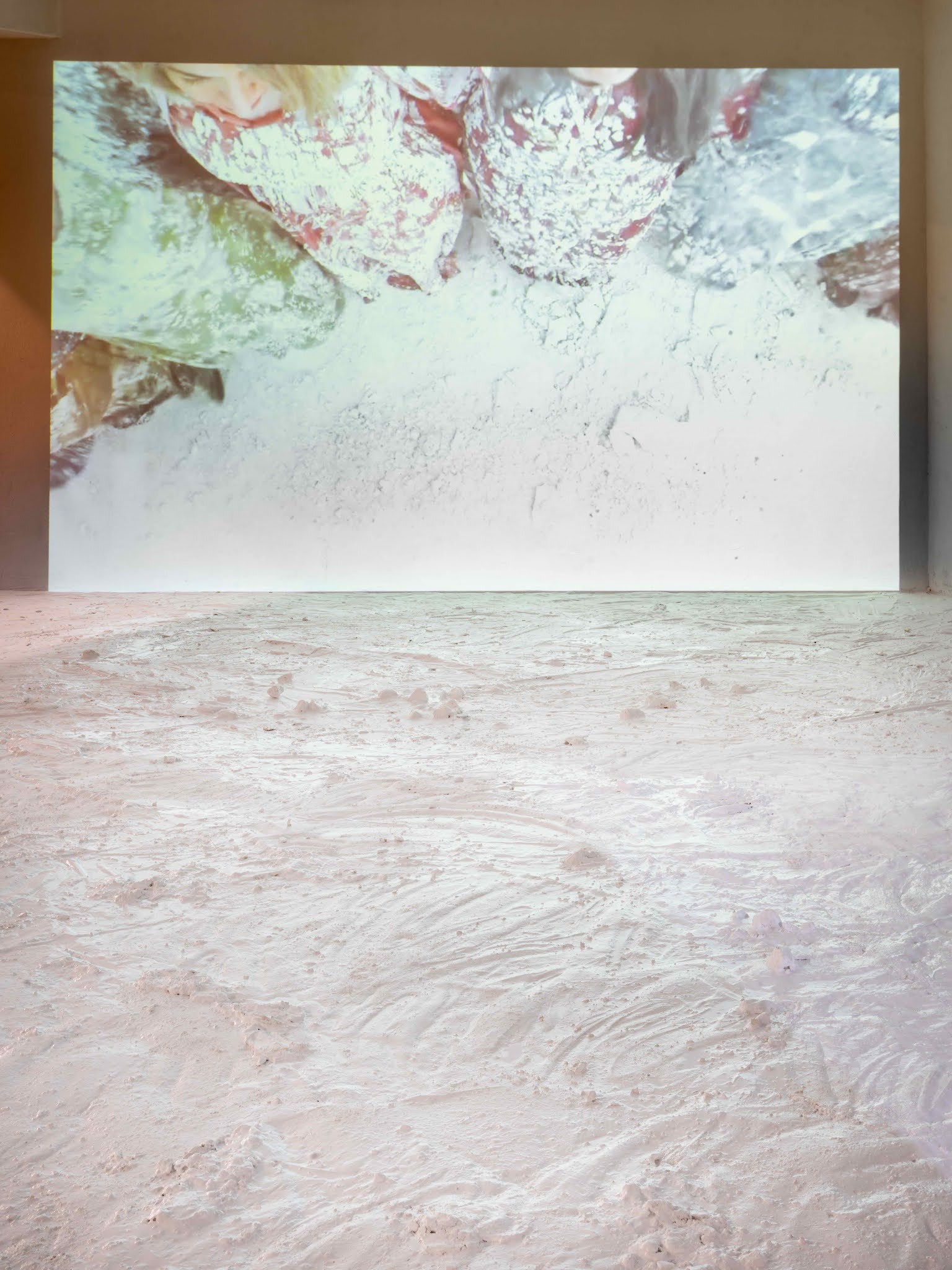 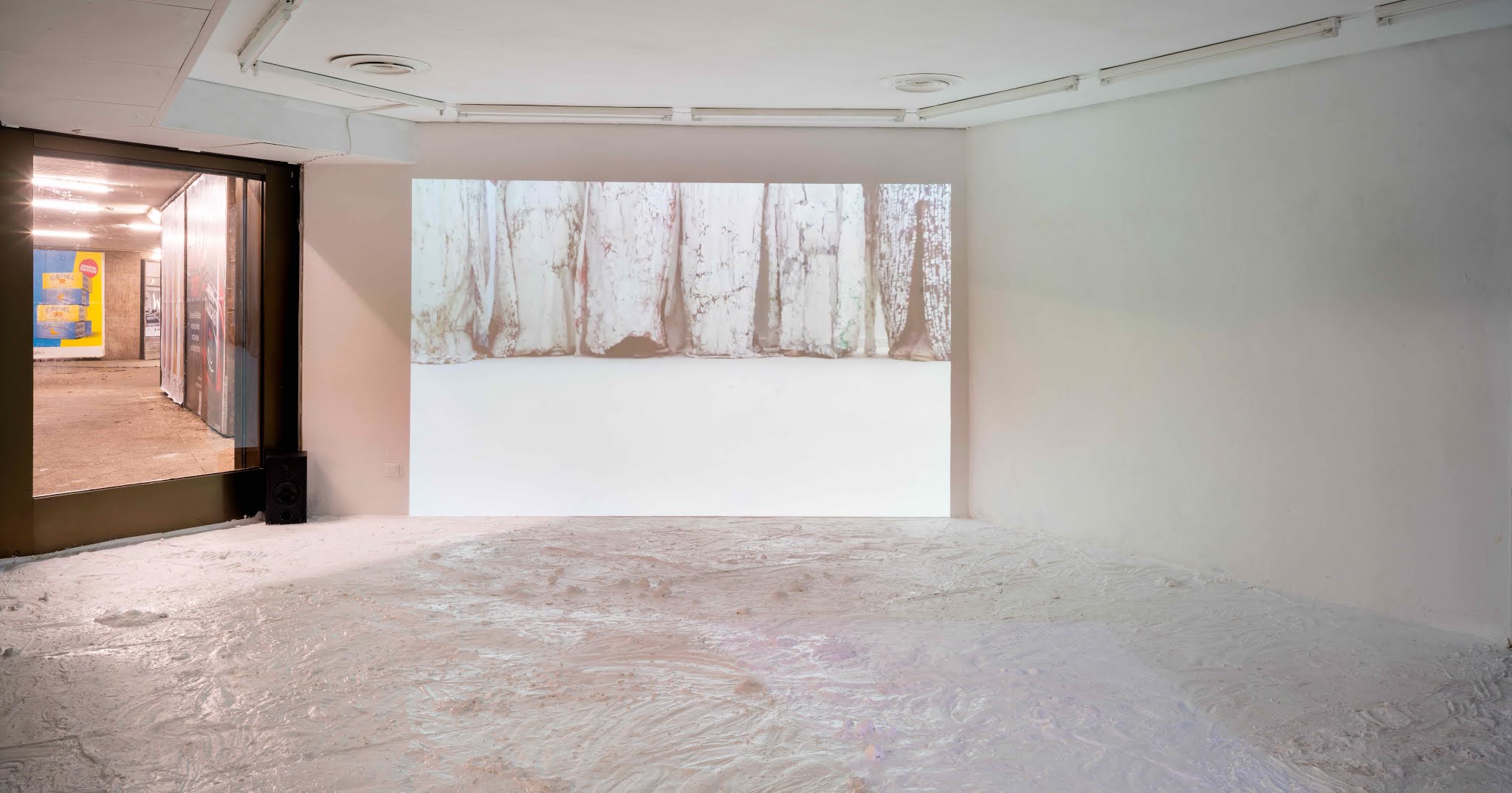 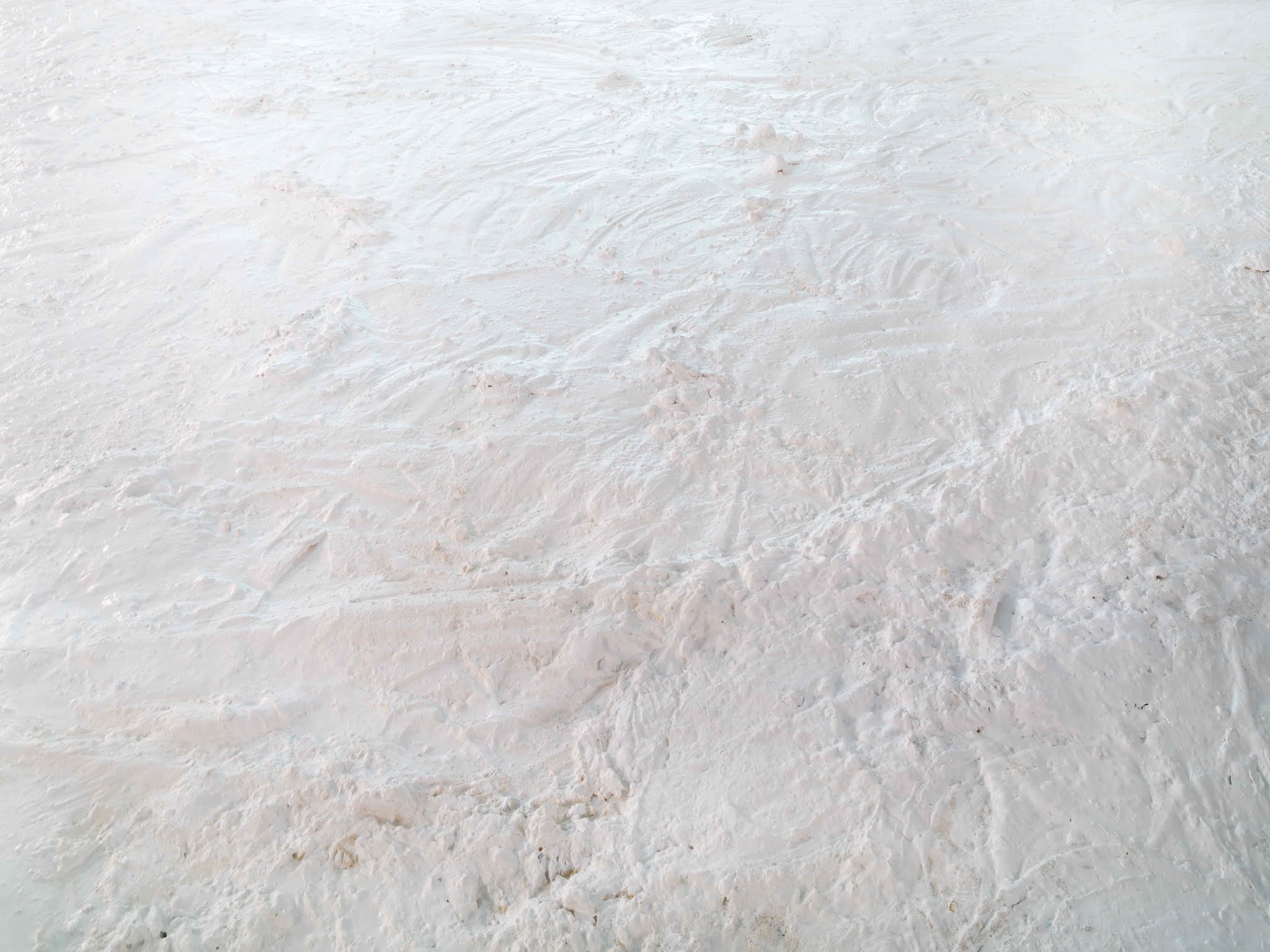 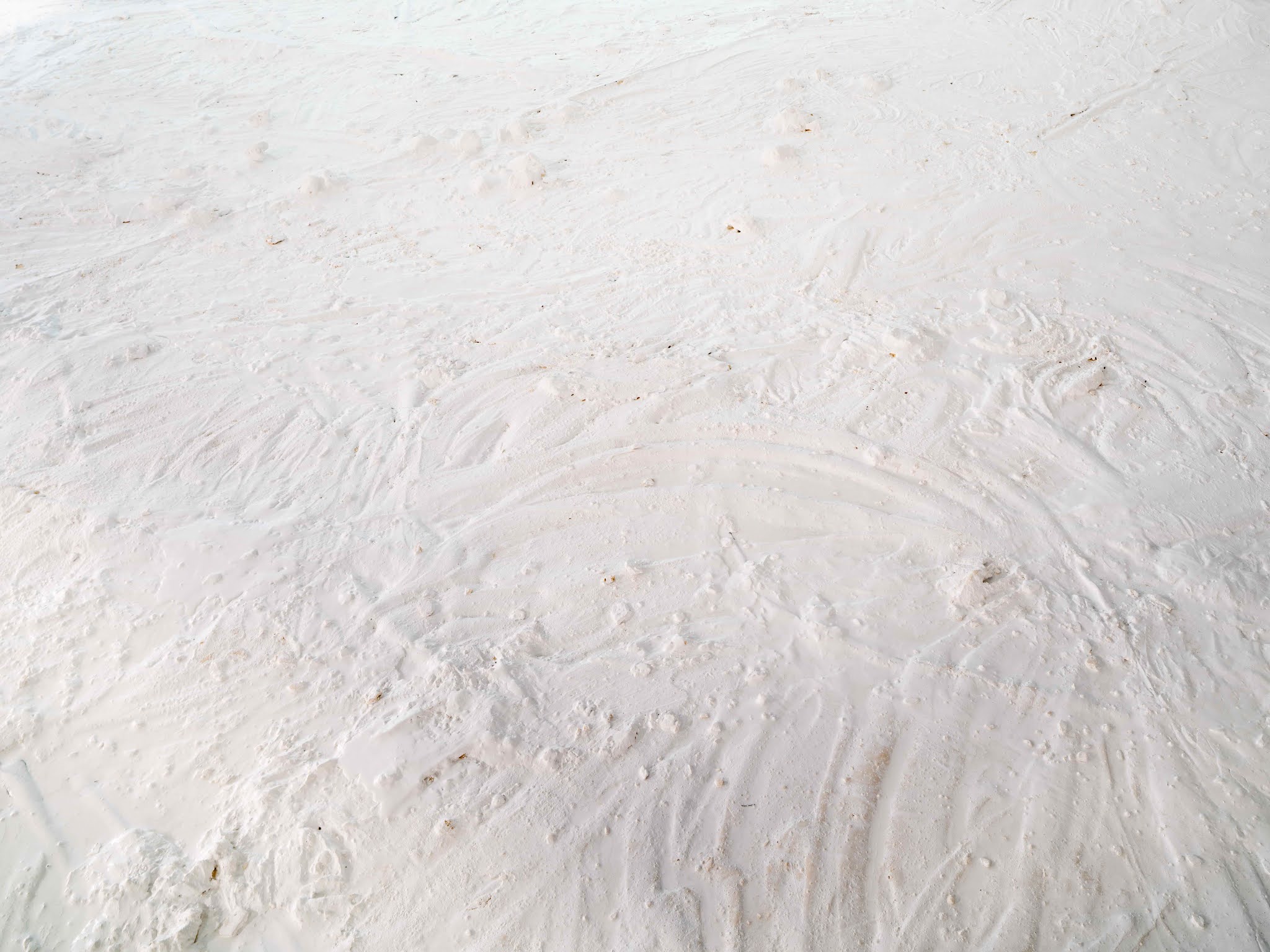 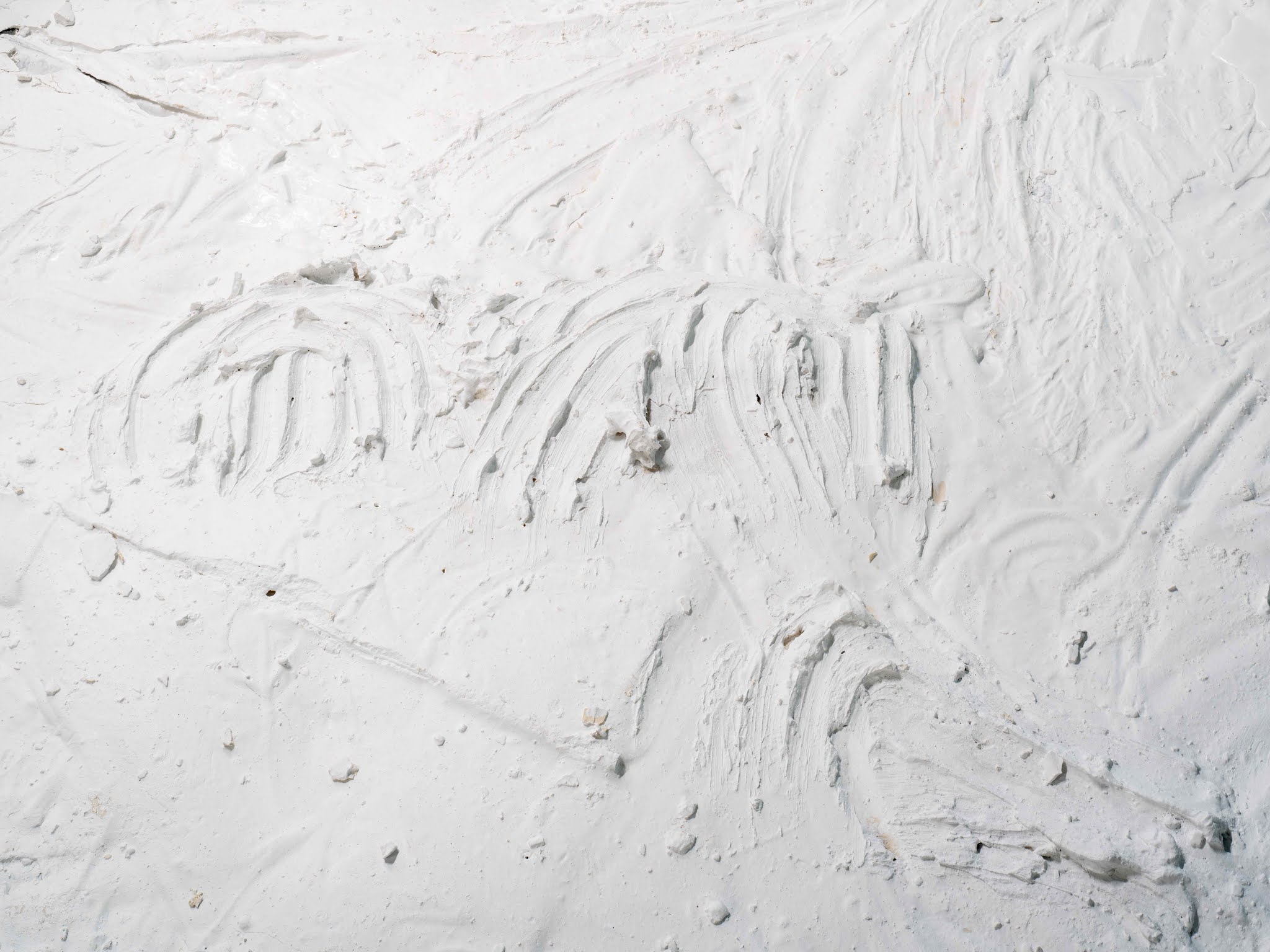 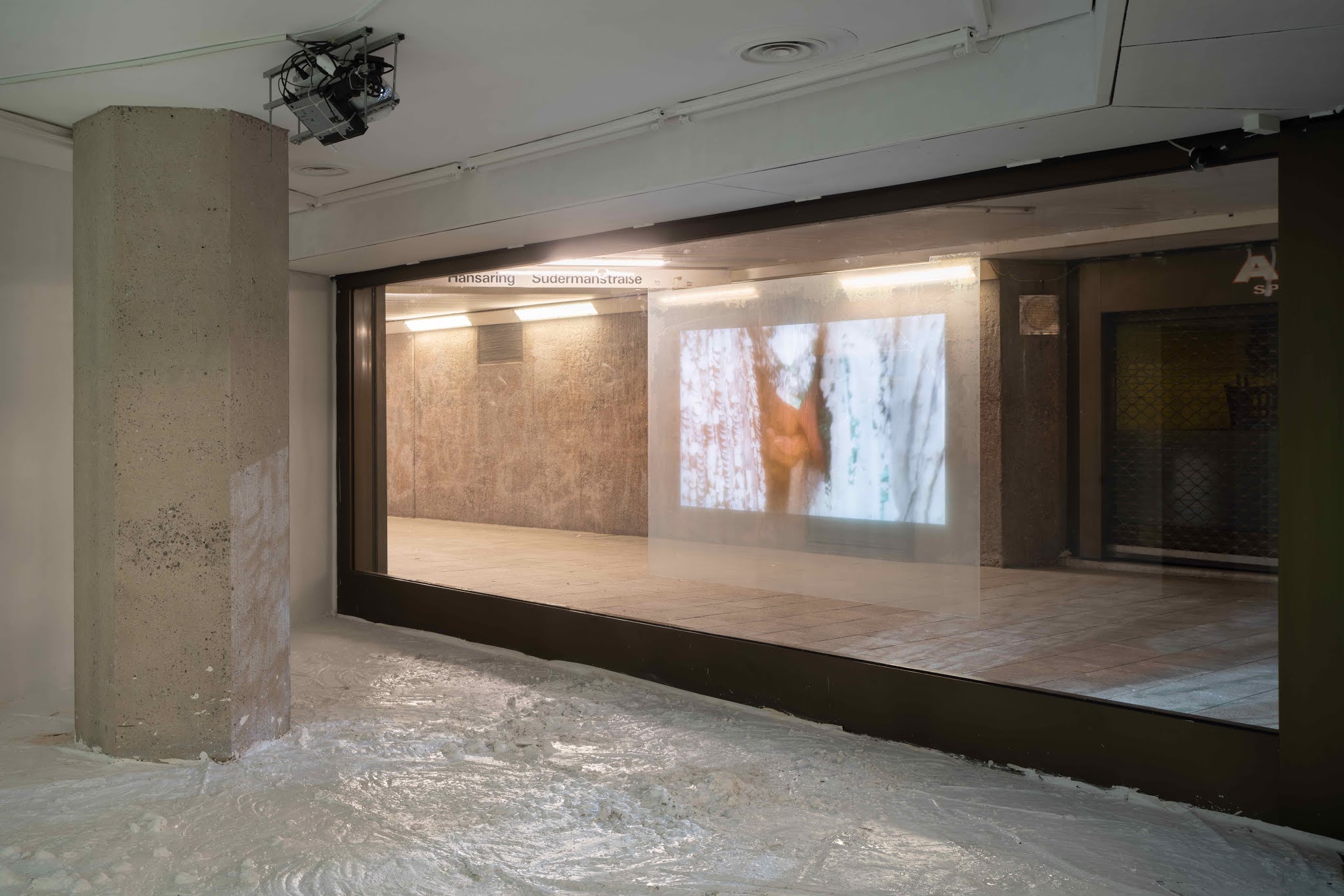 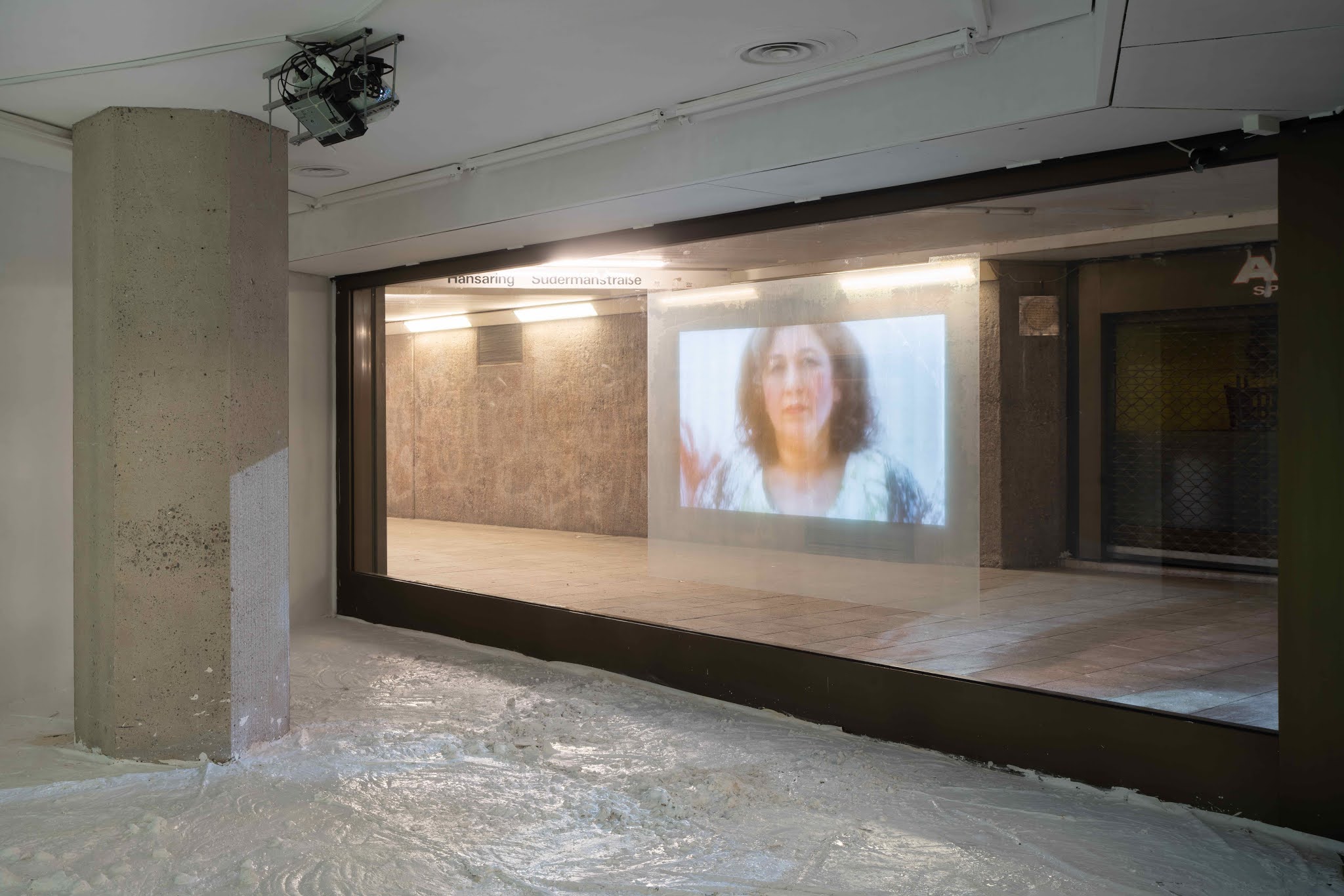 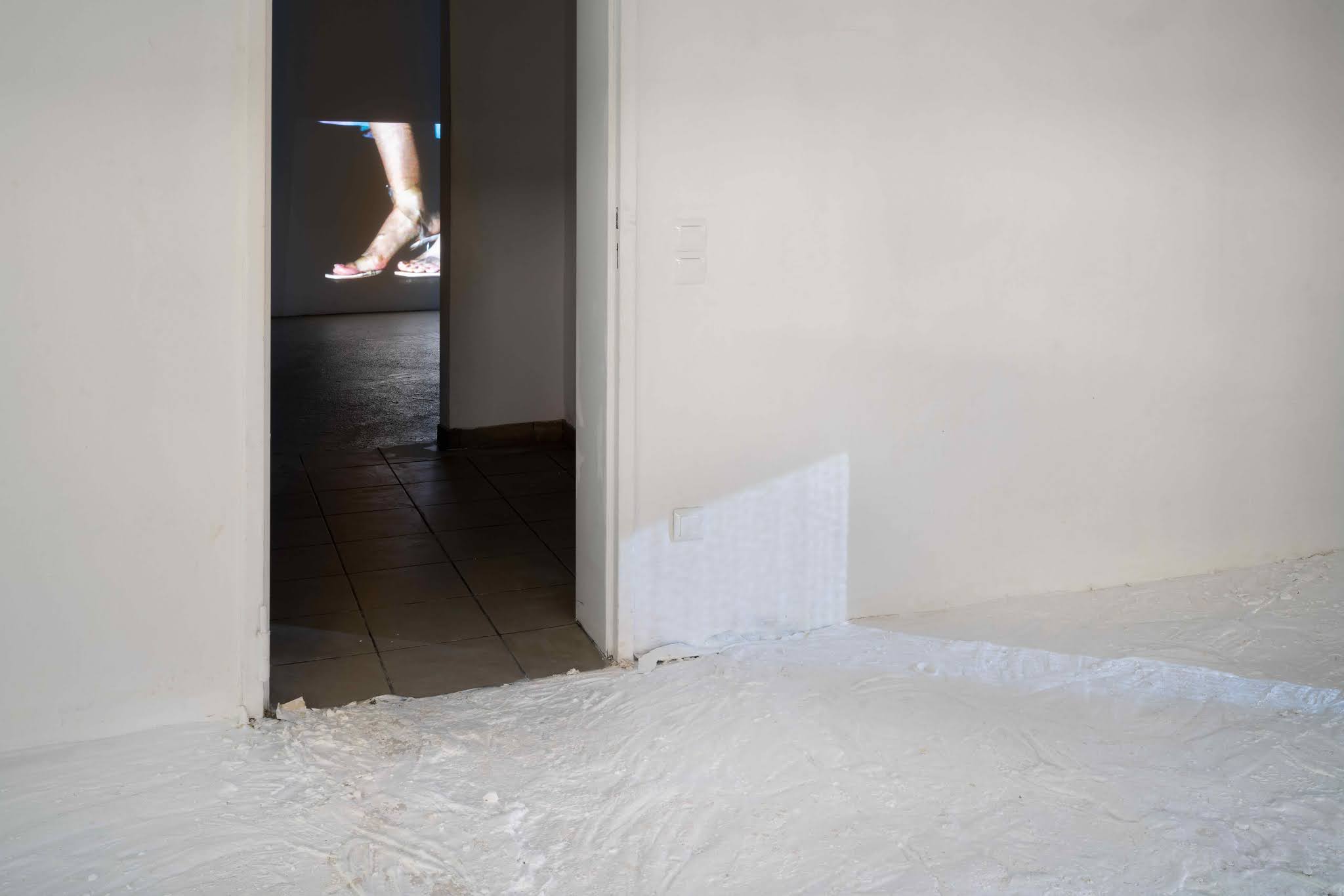 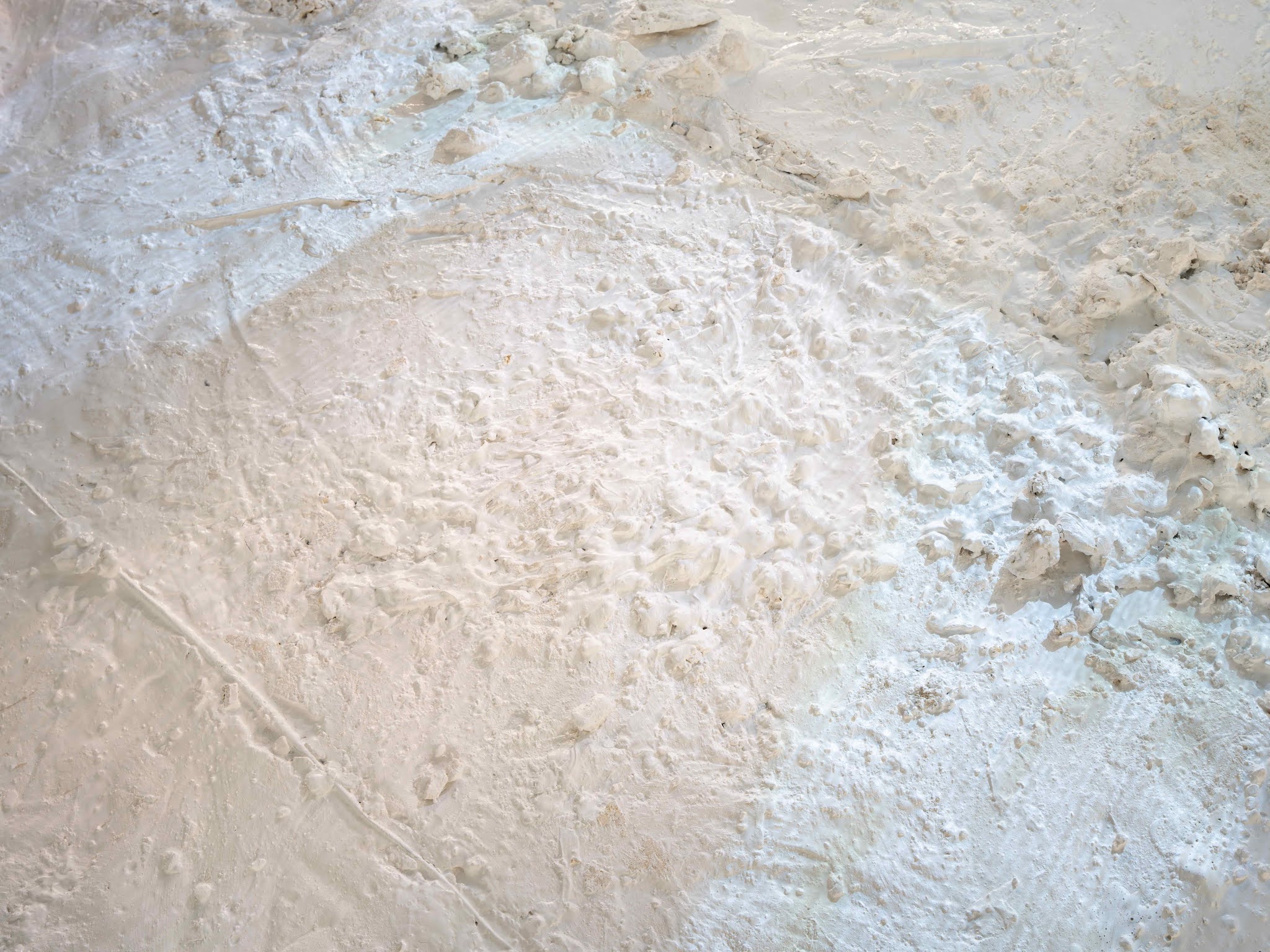 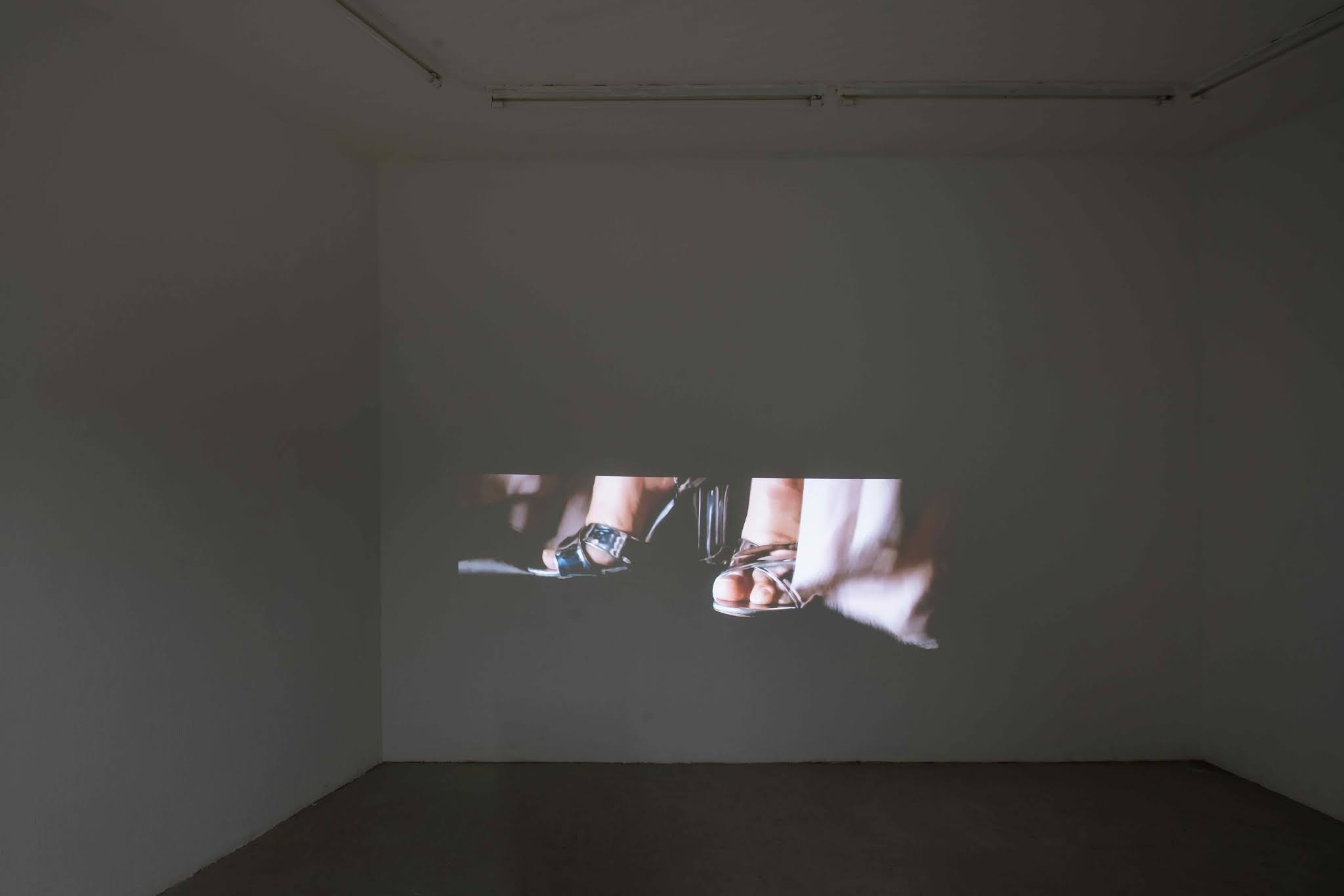 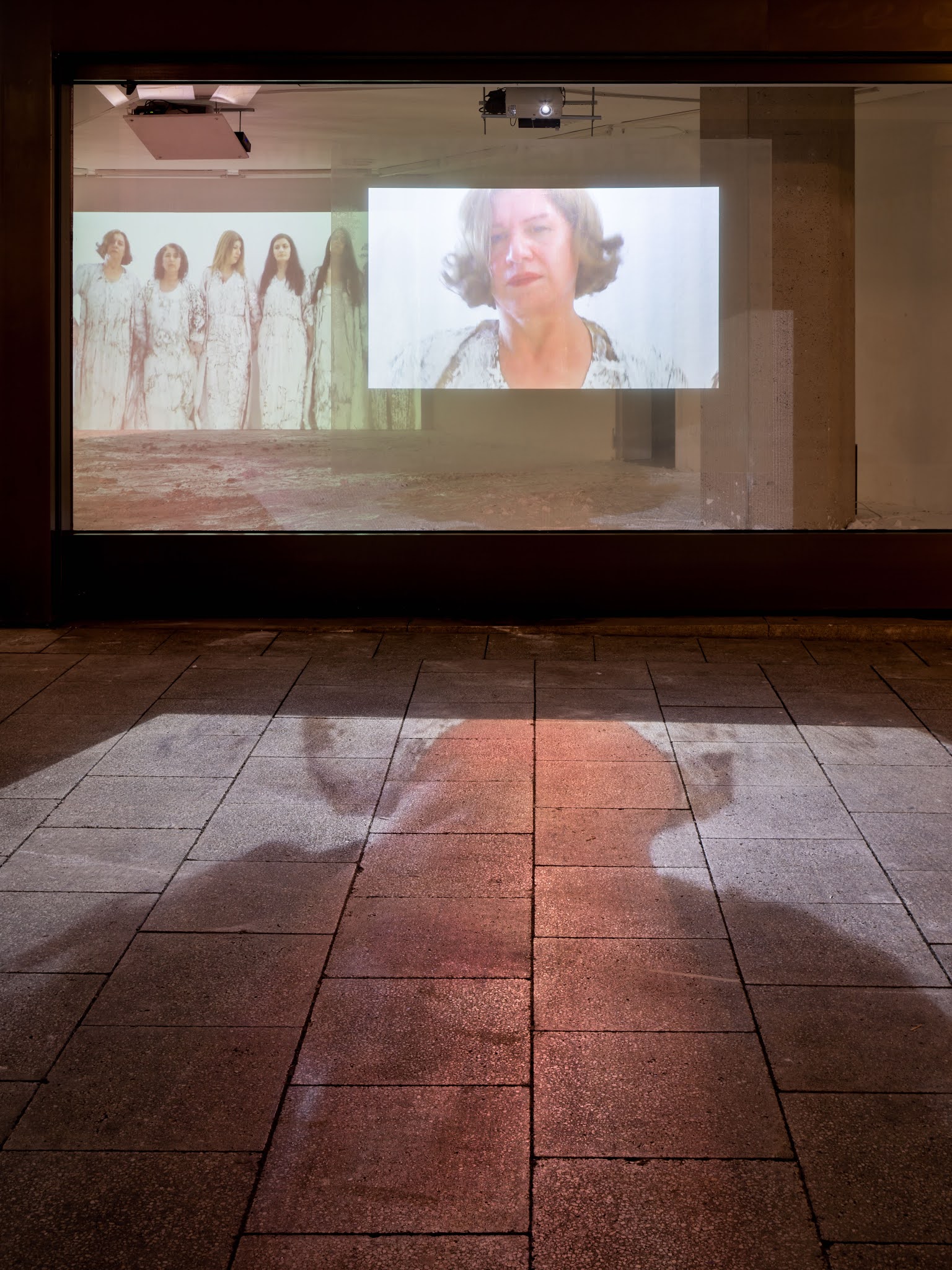 The work "Der Stoff / Kras û fistan" as a multi-channel video installation shows a dancing group of women, formed in a line, their clothes painted over with white plaster. The dance, usually taking place in a circle or semicircle, is a straight line here. They do not see each other, while they are exposed to the gazes. Although they are in a group, each seems to be on her own, only through the touching of shoulders, the rubbing of fabrics against each other and the energy, does the presence of the other women become perceptible to the individual.

White sculptures evoke the association of ancient sculptures: But they are the inverse of these sculptures, for they move, they are clothed, and thus naked in a different way.

They dance themselves out of rigidity, fight their way out of whiteness, move out of the negated, free themselves from associations, transform and reveal themselves in movement: a stripping bare without showing skin, exposing their self and their existence and, by showing their Kras û fistan: making themselves vulnerable, because the Kurdish clothing can be seen in the dance and through the cracks in the plaster, exposing the fragility of their bodies. The plastered fabric does not protect, it does not heal the break. The fabric, the design of the clothes to the Kurdish people a symbol is a confession of their Kurdishness. The fabric, the clothing, the Kras û fistan, the movement are the physical manifestations of these Kurdish women, which makes them the target of many regimes. Art becomes political when politics fails.

A picture within a picture can be a performance on video at the same time, which is a collage. Havin Al-Sindy works with layers, with layers that force viewers to stand still while the work, in motion, transforms. The plaster that is broken, danced to pieces, exposes the figure of the women; as if the women were shaping themselves as they dance; the artist who plastered them and robbed them of their freedom of movement in the process is no longer the creator of their work during the performance, the work takes on a life of its own in the dance: this too is a political analogy. In the ruptures, in the transformation, there is the truthful, there is what is. In dance, the inner is turned inside out.

If dance is the physical expression that we do not find in language, what does this work tell us? How can it be translated into language? At the risk of mistranslation, the attempt must be made: In conversation, Havin tells me she understands Kurdish dance as an act of resistance. It is even more: it is a declaration of struggle because it calls a group together, organizes them, makes them move in rhythm, calls them to move. The loud sound of the breaking plaster, the incessant pounding of feet in the plaster, the rustling of sequins is reminiscent of a march. In the past, women followed their husbands into the mountains; later, men followed them into the mountains. They have always been an essential part of the Kurdish struggle. I know: without the Kurdish woman, the Kurdish resistance would collapse.

The choreography of this dance knows no beginning, the motivation is lust; the dance consists of this long middle part that can break off at any time, with which the break-off marks the unpredictable end. In the video, the women will dance as long as the exhibition lasts, until physical exhaustion, until everything is broken, they will have danced.

To get to the core, a rupture must have preceded, in all its facets: The touch, the movement, the liberation lead to fractures. The broken pieces of plaster on the floor testify to the presence of the women's bodies, the "orientally percieved body" breaks the habitual gaze of the spectators who associate these bodies with erotic belly dance. It is important to look at the women without exoticizing, eroticizing, fetishizing them. Speaking with Emanuel Lévinas: We see the faces of these women, their countenance, we recognize their existence and this recognition of the Other obliges us to take responsibility that this Other is not harmed, that the Other does not experience death because he is the Other.

The second work The Shoe Pêlaw shows different foot shots of women, this can be interpreted as a continuation to the work Kras û fistan, it can also stand on its own. Here, too, viewers are confronted with similar imagery: The otherwise fetishizing depiction of women's feet through the male gaze is here countered by a different narrative through the sober recording of the feet.

Georges Bataille writes in "The Big Toe" women's feet can be "the object of anxiety-filled unease". The foot, although like the hands not hidden, is one of the intimate and vulnerable parts of the body. Attention is drawn to the foot, designer shoes, by the hollow clack of high heels, by jewelry or nail polish - the foot is adorned and limited in functionality; these emphases are primarily coded cues that these are women's feet. Because the movements and steps do not reveal the gender, feet in sneakers cannot be assigned to a gender, which directs the focus to the movement.

Foot jewelry also allows another interpretation: the foot, which does not get the attention, not the well-meaning characteristics of the other extremities, namely the hands, is given an appreciation here, not by the high heels, but by a golden ankle bracelet that many women of the older Kurdish generation wore, which was part of the jewelry inventory like bangles.

Havin Al-Sindy, born in the autonomous kurdisch part of northern Iraq. She works in Düsseldorf and Stuttgart. Al- Sindy granted as a master Student in 2018 at the Staatliche Akademie der Bildenden Künste in Stuttgart. Before she fnished her studies of Art and Biology at the University in Essen-Duisburg. Currently she is a guest at the Staatliche Kunstakademie in Düsseldorf in the class of Gregor Schneider. www.al-sindy.de

Karosh Taha, born in the autonomous kurdisch part of northern Iraq. She works in Essen. She is an author who has already gained a lot of recognition for her work. She received the Förderpreis des Landes NRW, the Hohenmeser Literatureprices and the Stipendium des Deutschen Literaturfonds (German literature fonds).