Project for an Overcoat at Editorial / Vilnius

Project for an Overcoat / Paloma Proudfoot 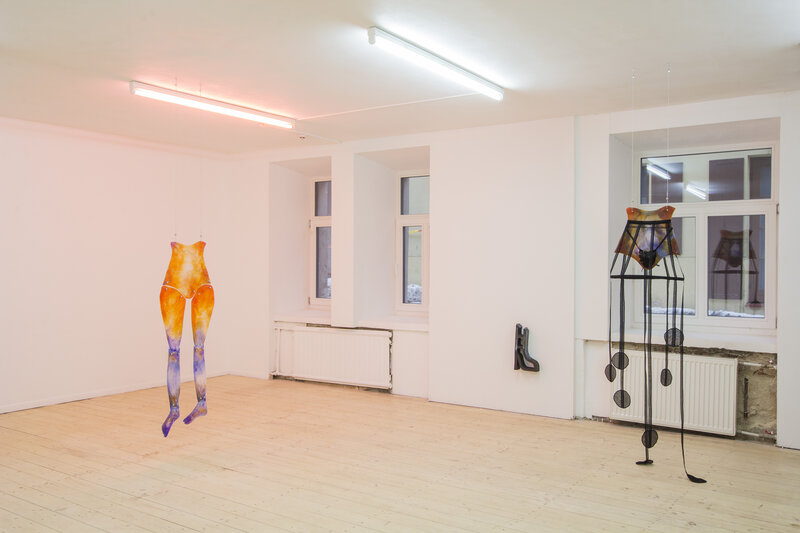 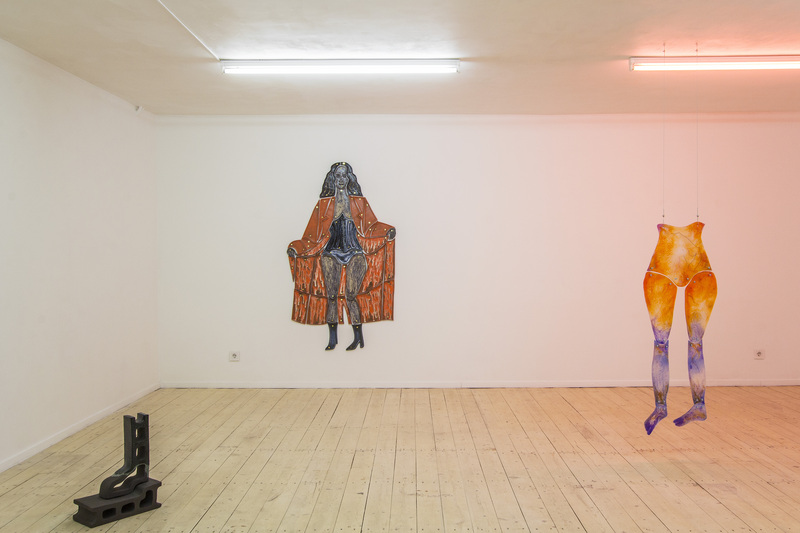 artist Paloma Proudfoot. It is the first larger presentation of the artist in the Baltic region.

Notes on dressing / Project for an Overcoat

1. Dressing is a process that marks a beginning, a readying of oneself. Or perhaps more

accurately it is a renewal: changing out of and into something different to demarcate a shift

in time or duty.

2. Dressing is a ritual of preparation, of putting straight – dressing a wound in a bandage,

dressing a salad with oil for easier swallowing.

3. Dressing my dad in hospital, remembering how he admired his standard issue gown,

marvelling at the detail spent on a garment only ever destined for single use: I thought of

how all patients, with their individual histories and ailments, become one body in this

uniform, a body generalised in their need for care.

4. Clothes can be a balm, covering wounds literal and metaphorical, simultaneously

smoothing the eye to edges and repelling intrusion. The dressed body presents a unified

whole and creates an illusion of safety around the body; one in which we feel and perceive

others to be contained, discrete entities. Clothes define us as individuals but also form a

kind of connective tissue, signing our allegiances to others.

5. Clothes can be bondage, felt to be a punitive chore that falsely expresses individuality,

completely disassociated from how the wearer might truly feel. This is perhaps why clothes

powerful attribute. The lie as shield: carapace to the unstable centre and protection against

6. In the 1920s Russian Constructivists tried to design a uniform clothing fit for all to

espouse the Communist values of the nascent Soviet Union. They aimed to reject fashion

and all its bourgeois individualistic associations and embrace social cohesion through

uniform. The designs, most of which were never realised, seem to function as diagrams for

an alternative school of clothes making. With limbs sectioned off and flattened, not cut but

constructed, a collage of different material planes rather than the hidden seams of neat

tailoring. The flattened shapes put bare limb and coat as if as one, like X-ray scans melding

cloth and skin. These designs proposed a utopian vision of a world without fashion, an

egalitarian society without difference, but no consensus on a single type of dress could be

found and the designs ended up creating a fashion in and of itself.

7. Codpieces, the padded prosthesis to exaggerate the crotch of the Tudor English man,

glory that framed their newly upholstered dicks. These men of great standing looked to

mark themselves apart: richer, more powerful, better endowed than the next, but now we

can see how they all conformed to look exactly the same.

8. To be unable to get dressed marks one as an outsider. Those that are too physically or

mentally unwell, or homeless without a change of clothes and shelter, are shunned from a

capitalist society, whose entry system is the ability to show up ‘presentable’ and ready for

work. If I choose not to get dressed, I have been brought up to see that as being lazy,

somehow renegade, potentially dangerous even, when I know that it is actually completely

harmless. I think of Jo Spence’s diaries recounting her experience of breast cancer and the

entry that read, ‘How do I give up responsibility without being ill?’ emblazoned in black

9. As my dad’s illness progressed, I might have imagined that dressing would have steadily

decreased in importance. Sartorial concerns seemed rightly insignificant in the shadow of

his imminent death. But in watching the ever slower and exaggerated process of my dad

being bathed and delicately changed into fresh pyjamas by my mum, the process of dressing

became an almost holy ritual. Confined by his illness to his bedroom, dressing was entirely

devoid of concern of how he would be seen by the outside world. I saw dressing at its

purest: a process created to provide comfort and convey love. Dressing did not mark the

start of his day but formed almost the entire purpose of it. It represented his desire to live,

and he dressed, or at least was dressed, until he really could no longer

The exhibition will run until March 13th, 2021, at “Editorial” project space (Latako 3,

Paloma Proudfoot (b 1992, London) is an artist living and working in London, with an

MA (Sculpture) from the Royal College of Art. As well as her solo practice she

collaborates with artist and choreographer Aniela Piasecka and the performance group

installations and performance events together.

(2018). Recent duo and group exhibitions include Dancing at the edge of the World, Sara

Plant, Tenderpixel, London (2018); The Clean Carcass of the Host, Marso Galeria with

“Editorial” program is supported by the Lithuanian Council for Culture.