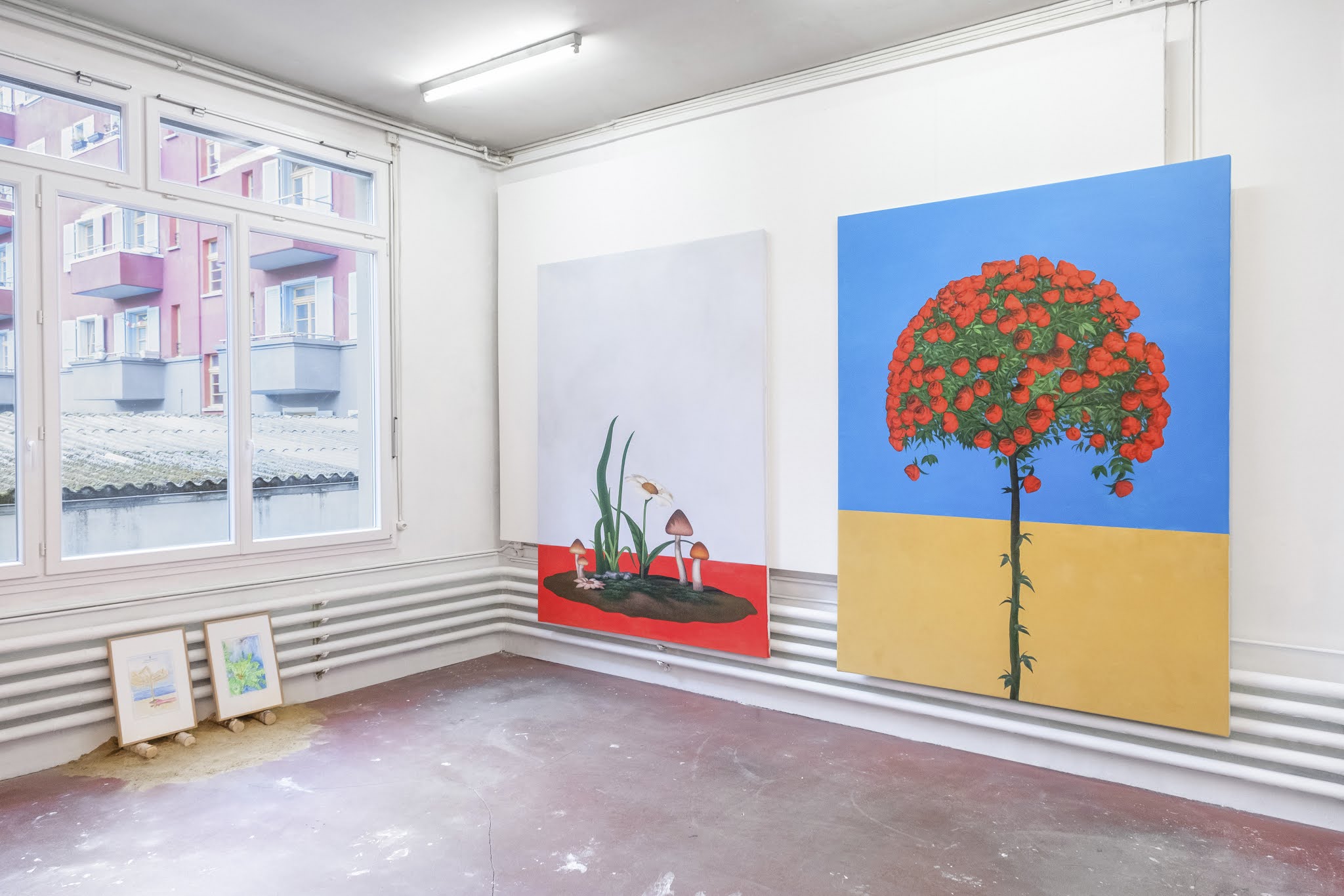 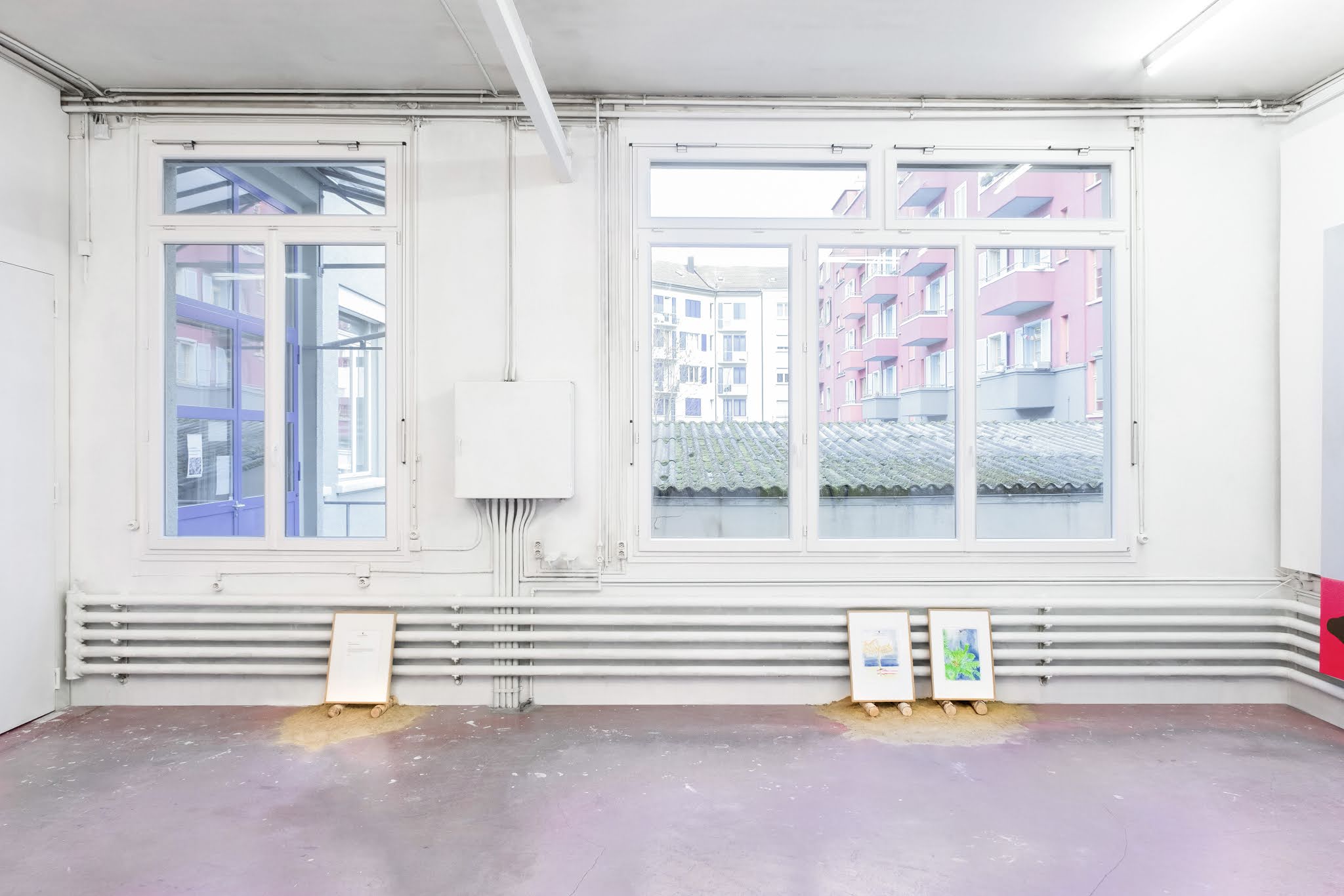 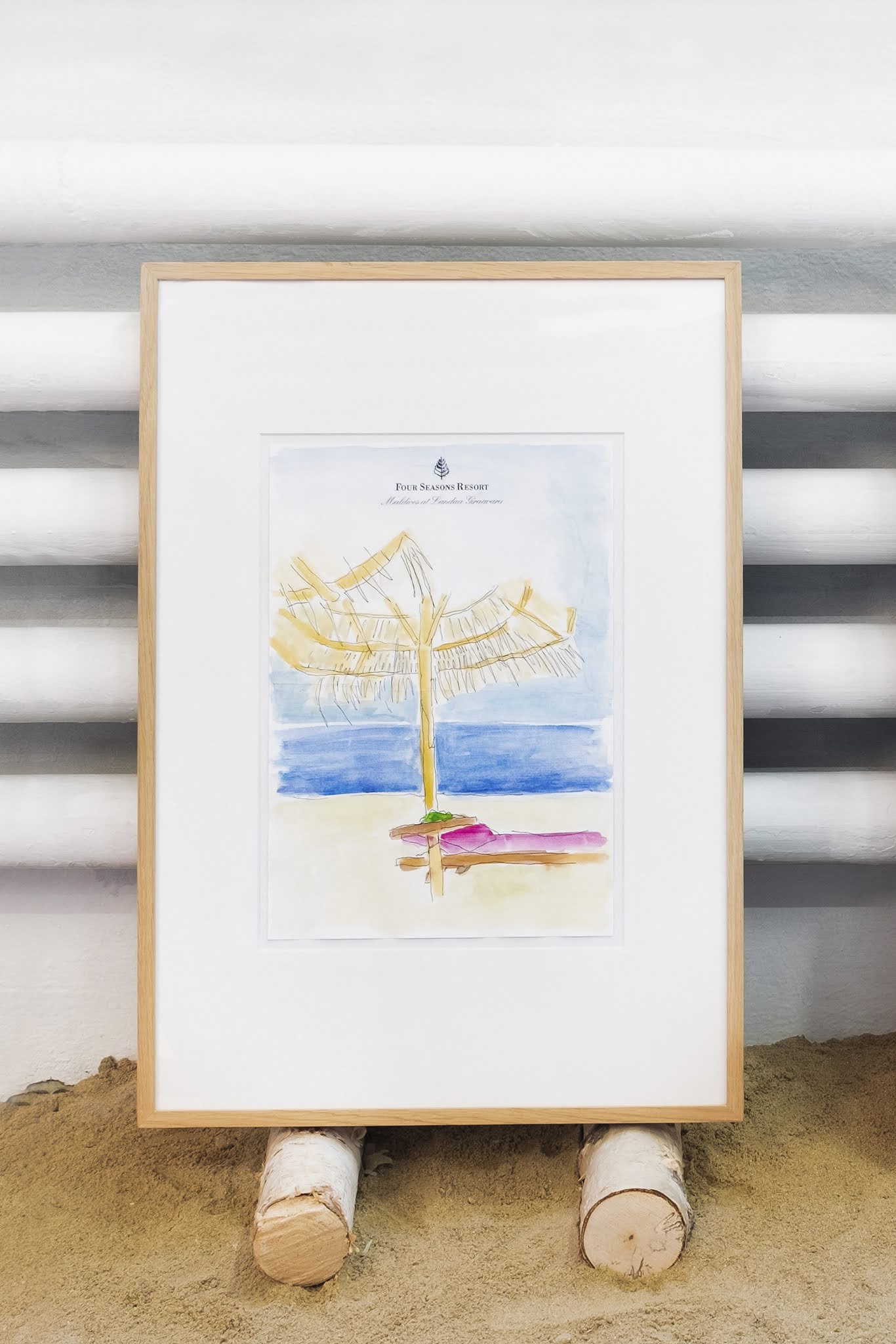 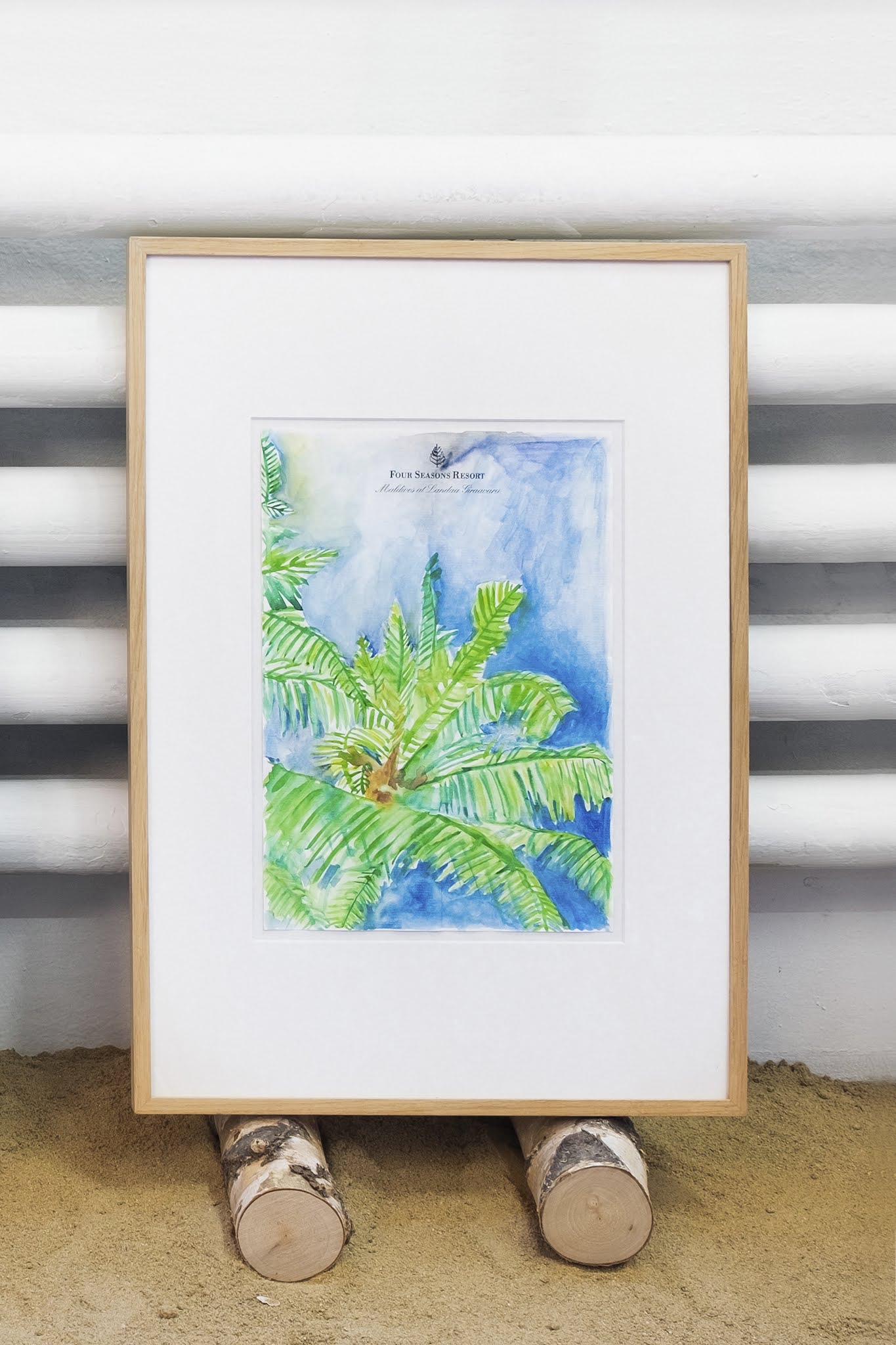 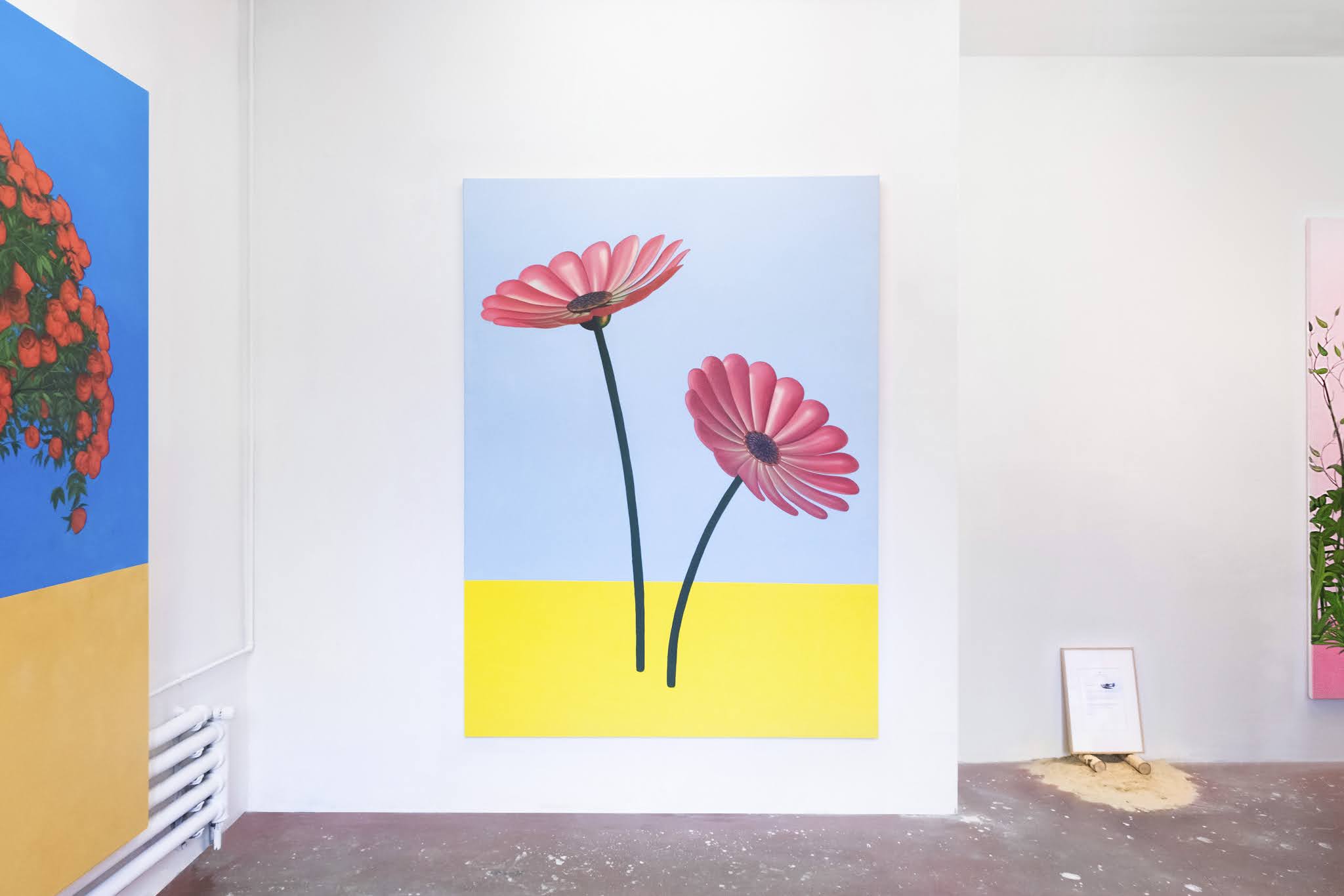 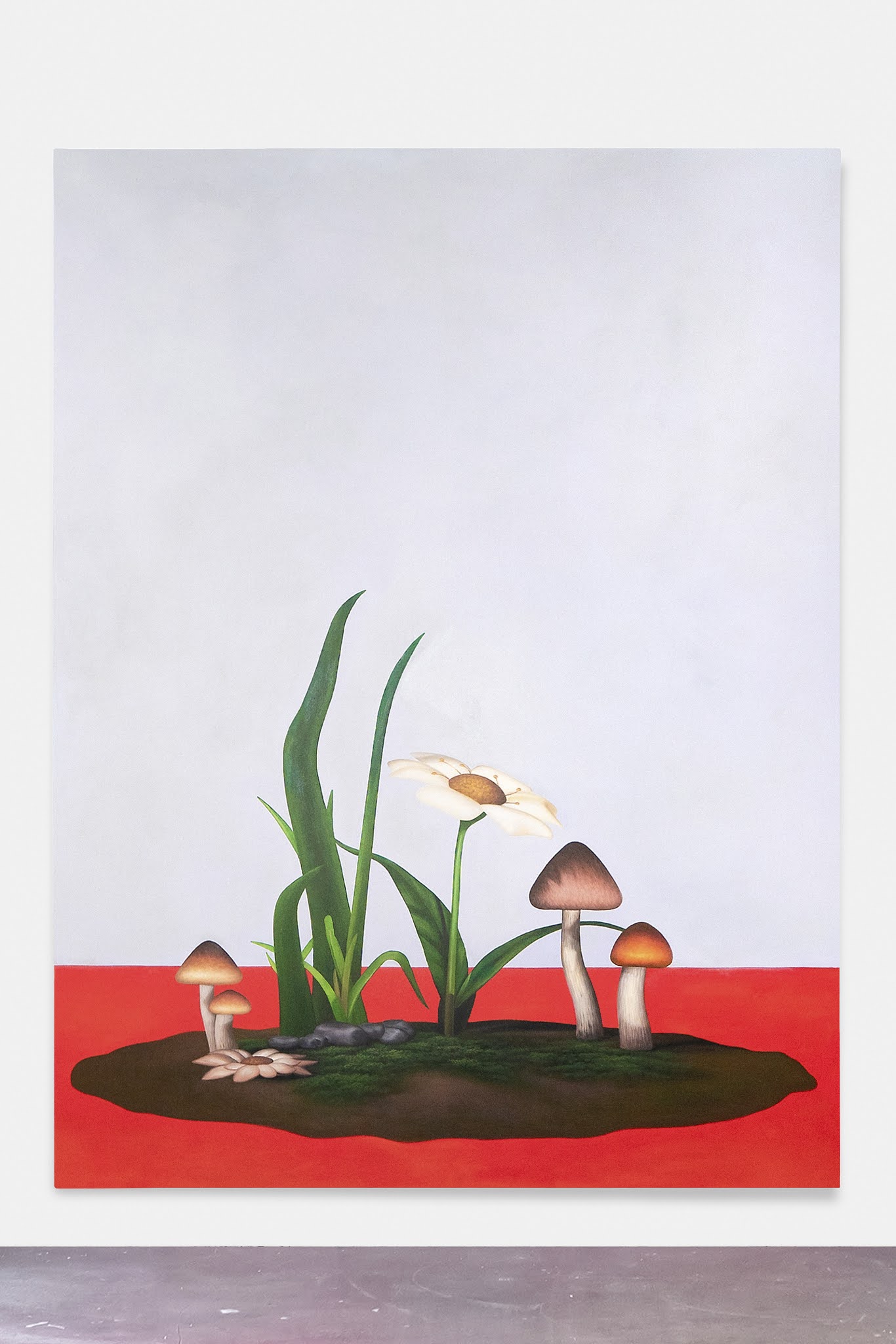 “As the seasons change...” A girl once started a letter to me that marked the end of our rela- tionship. She went on to describe the problems that led to this decision and the hopes mov- ing forward, the chances that lay in this step. I think of this sometimes, how the world follows its own rhythm and how nice it is to be in sync with it. I was reminded of it when Marius asked me to write a text for his show titled “Four Sea- sons”, that will take place this month in a tem- porary space he organized in the center of Biel. Featuring a suite of large format paintings and more intimate drawings on hotel stationary, the exhibition comes at the beginning of a new period for the world and marks a step in the evolution of his painterly practice.

During an extended stay in Switzerland this autumn I went to re-visit the museum of Franz Gertsch in Burgdorf, where in a small room dug deep into the structure, a group of four large landscape paintings are hung. Titled “Four Seasons” and laboriously executed in the tradi- tion of photorealism, they each depict a quint- essential moment of spring, summer, autumn and winter. The scenes are all set in the forest, and while the lights and colors strongly differ, it’s the richness of nature and its complexity that ties the work together and makes it one of the most impressive painterly arrangements and feats that I have ever seen.

Marius Steigers new paintings work differently, an almost austere flora is set against hard edge color fields that are slightly uncomfortable and play on visual references from Blinky Palermo to Olivier Mosset. (Palermo died in 1977, aged 33, on an island on the Maldives. What later in the text turns out to be an ironic coincidence in relation to this show.)

Simple but with great attention to detail nature has been reduced, or is it enhanced ?, to 3D renderings of plants and flowers that we could encounter on our stroll in the forest. The light that is shed upon them from an artificial sun carries both a romantic notion as well as the feeling of a lab and scientific progress. I think of both Saturdays in the forest behind my home- town and the emergence of genetic therapy in the last years. Or the discovery of mushrooms as super food, which replace coffee and get micro-dosed for enhanced creativity.

The question of authenticity and artificiality, of reality and fiction, continues in the smaller works on paper.

Four Seasons also refers to the famous upscale hotel chain, a brand which we encounter here as the letterhead of new drawings on paper. These works introduce a personal element and narrative to the exhibition; A stay of the artist on the Maldives. As I learn from Marius the paper he used here, has been manufactured after the original by digitally rebuilding the font, logo and layout of the Maldivian Four Seasons hotel. Thus, the drawings allude to and subvert the assumption that art is autobiographical. This also ties in well with recent developments in fashion and art where the notion of the orig- inal and brand value has become just another element to be appropriated. At the same time it plays on a long established trope in art history of drawings made on hotel stationary which goes all the way back to the impressionists, but extends through Martin Kippenberger, Julian Schnabel and George Condo into the today.

Now I can’t help but address a third way to look at the work through the title of this exhibition: On November 7, 2020, four days after the US presidential election, the campaign of incum- bent president Trump hosted a press confer- ence in the back lot of “Four Seasons Total Landscaping”, a hardware store in the outskirts of Philadelphia. Located between a sex shop and a car garage, the campaign missed the hotel it meant to book by a few blocks only. This incident turned the event which was aimed at discussing the status of legal challenges to the ballot-counting process in the state, into the symbolic end of Donald Trump’s presidency.

Last week a new president has taken office and brought a fresh breeze into the minds and hearts of people. Vaccine development and spread at the same time have raised the hopes of a global spring and friends started to invite me to weddings again scheduled for later this year. As the seasons change the future looks promising and I’m excited to start it with this show.