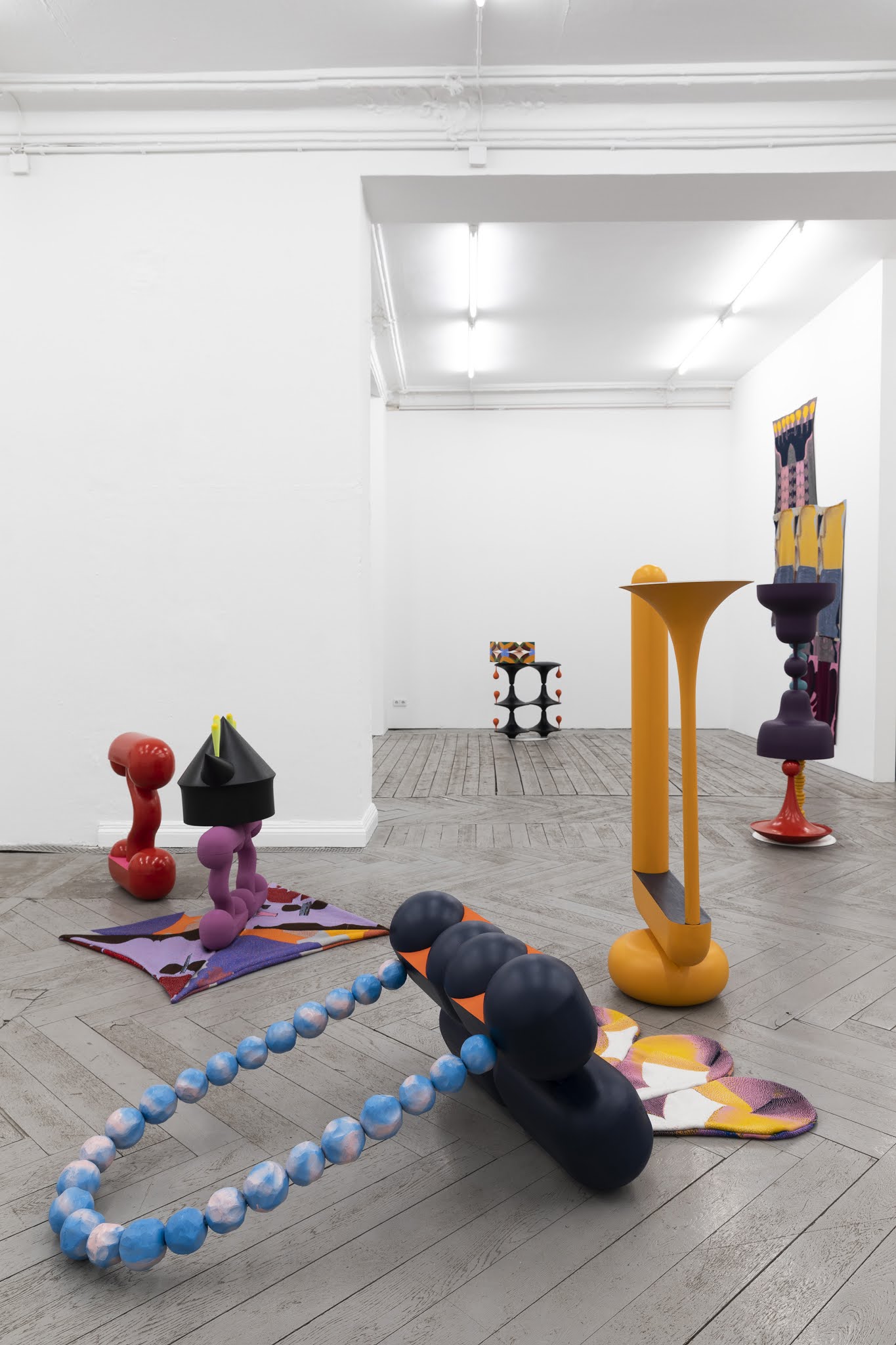 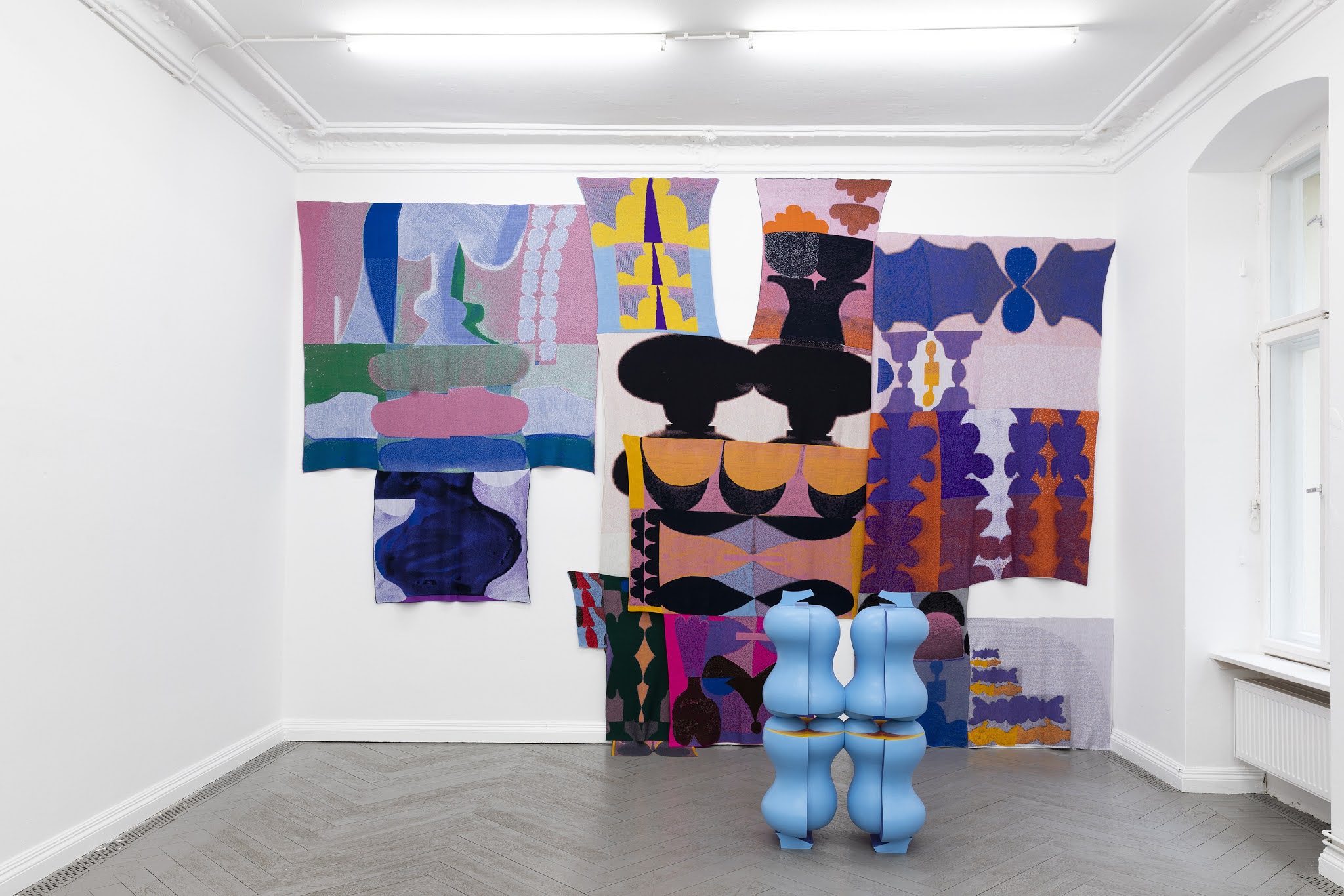 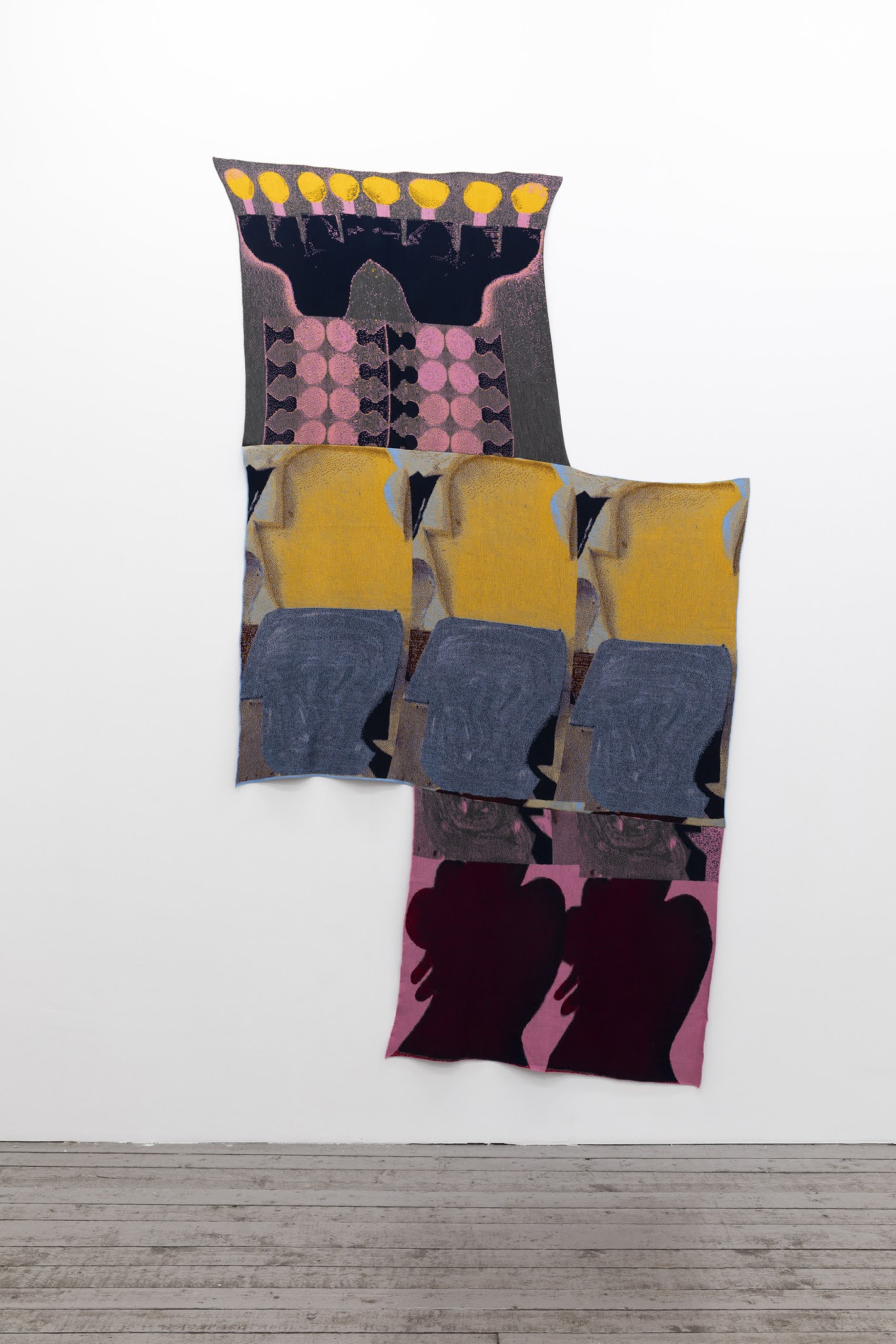 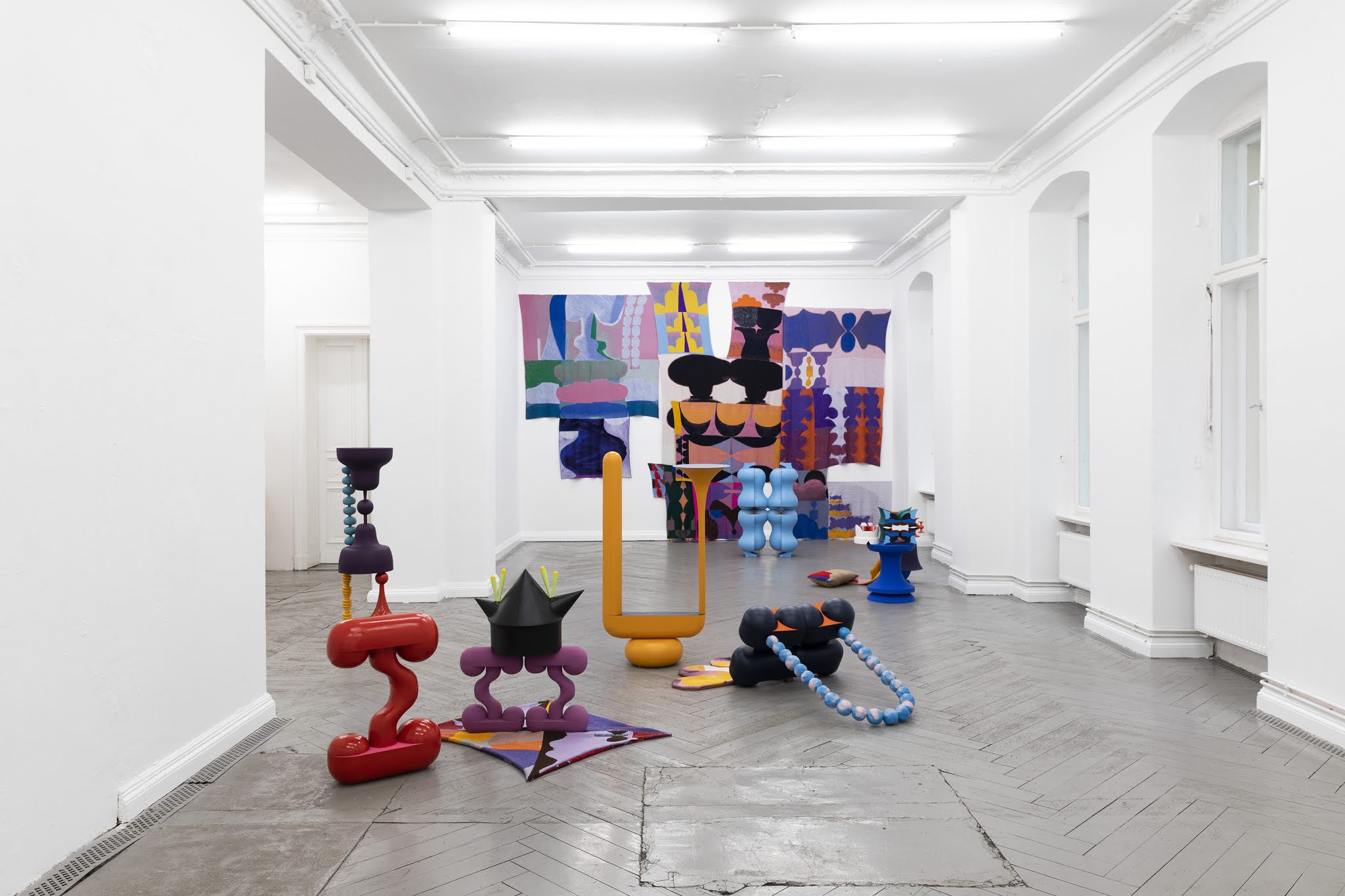 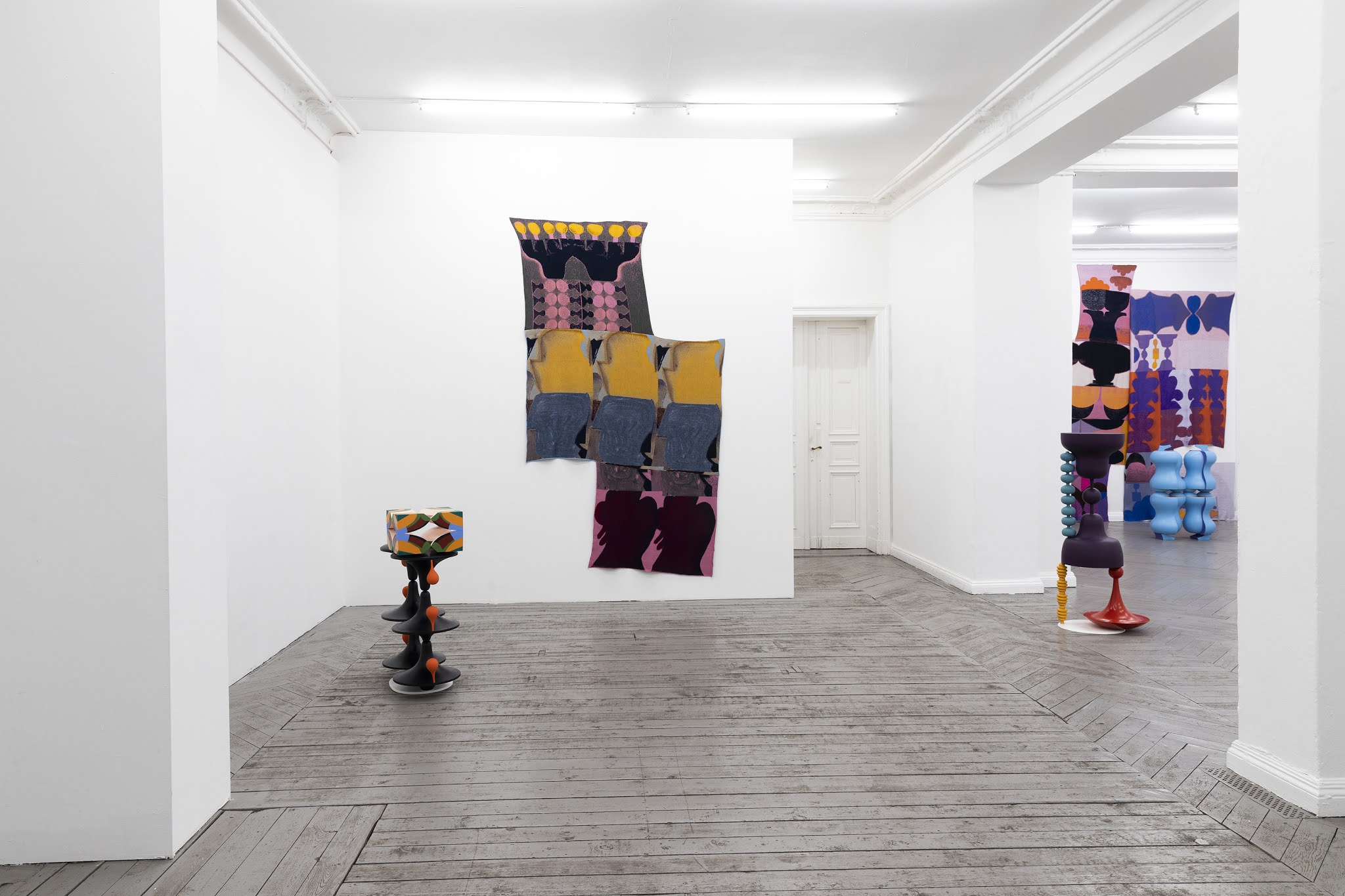 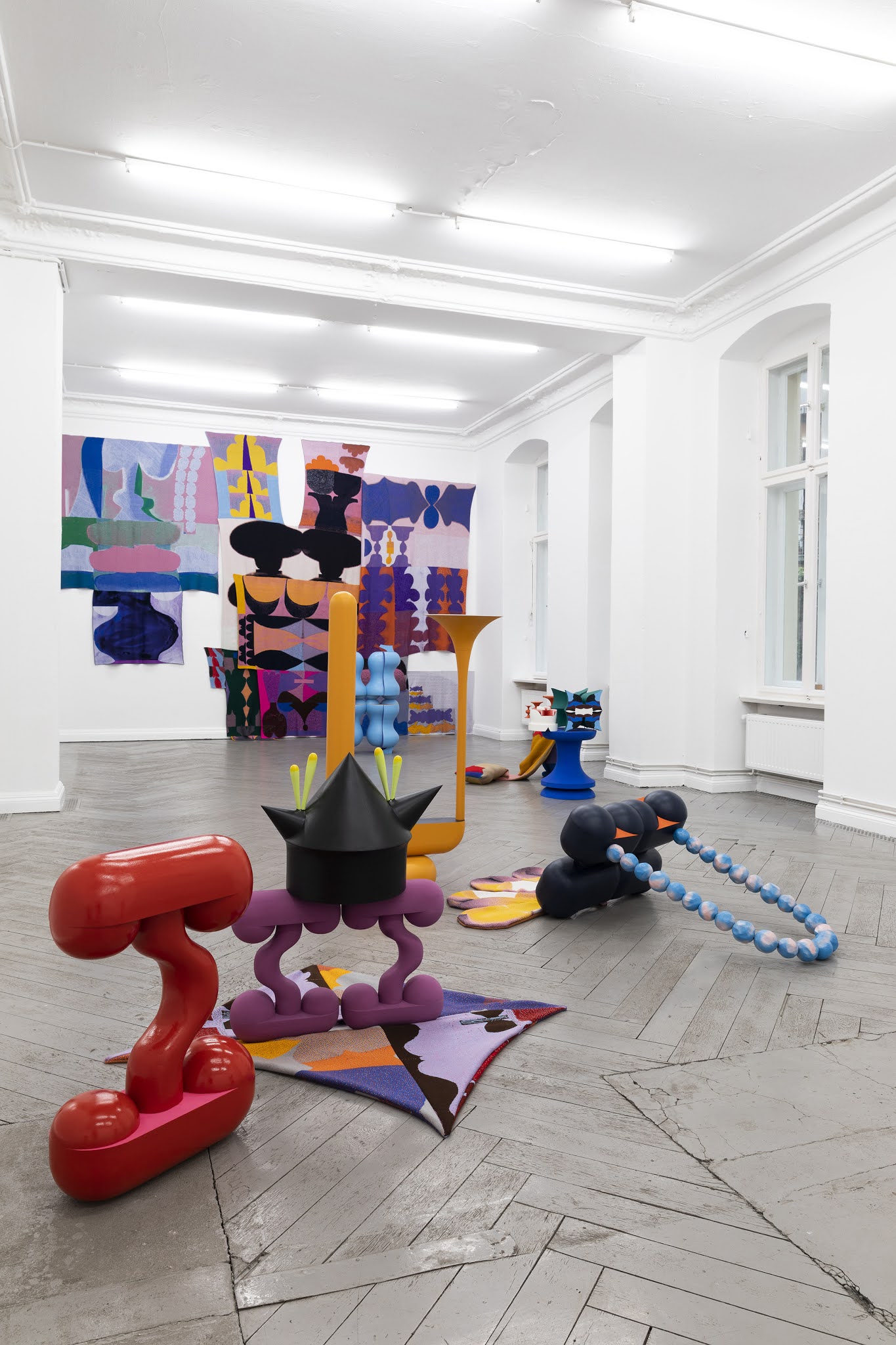 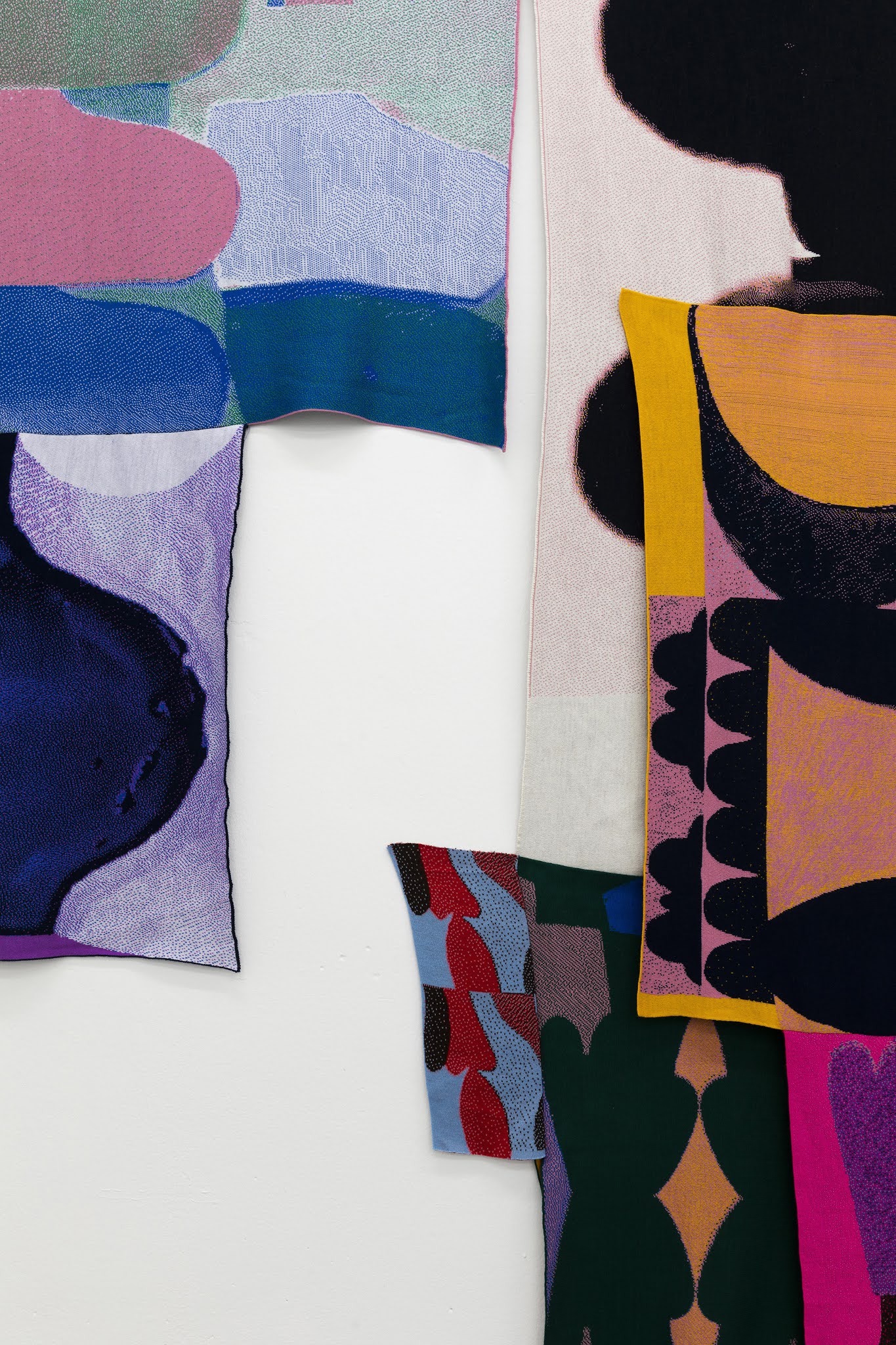 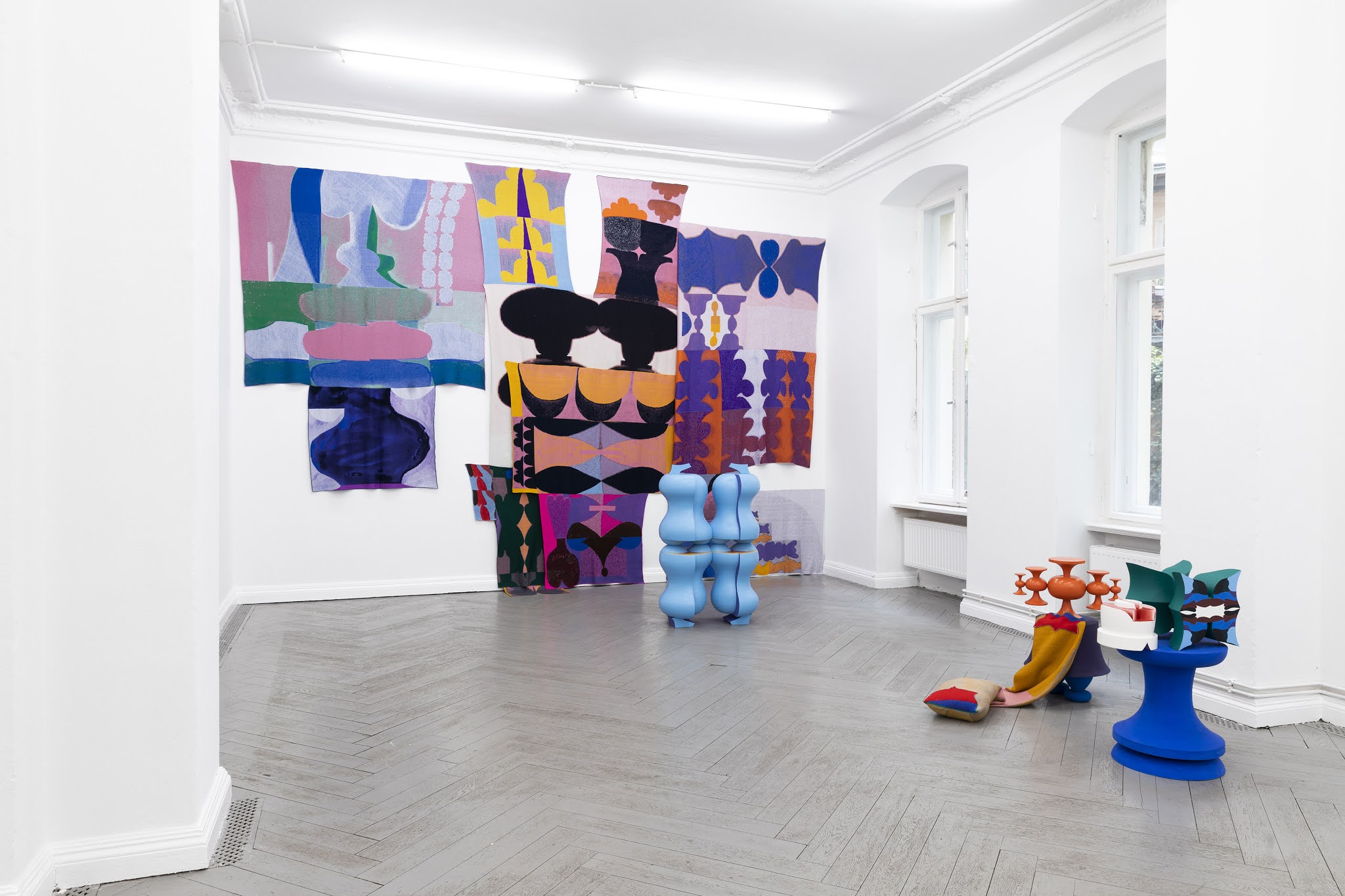 The exhibition “cut, cut, collab” is the first solo showing by the young Leipzig artist Maja Behrmann. She works with a constantly growing collection of shapes that develop continuously and manifest themselves in figures.
Presented in an analog catalog and in digital memory that must be maintained, the figures accumulate as confidantes. They determine each other mutually through their encounters with each other. As an open cycle, this bundle is the foundation for a structure of works and their autonomous components.
Shapes change, but can also be found again across groups of works and circulate in works on canvas, sculptures, and knitting pictures. Each further development, each new material, new form, and new individual detail in turn flows back into the index. By ordering and rearranging, the excerpts project themselves on each other.
“It is like a system that repeatedly breaks up and on which I build extensions. The cycle breaks through the experiences and contingencies with various materials and grows through the intermediate results in the process. These intermediate phases, i.e., forms and figures in their deviations and combinations, for example from knitted material, must then be catalogued and taken up again.”
Condensed, she describes her procedure as a “cut and repeat”. Individual forms, portions of them, and composited patterns are mirrored, reversed, or tipped over. She proceeds intuitively, but tests the constellations and responds to whether or not they function in their place. She thereby repeats this testing systematically; it is a constant back and forth, from one thing to the next.
Maja Behrmann’s works are intensely colored and graphic – in part reductions taken on their own, in part overlapping concentrations. Beginning with small outline drawings, what is seen is reduced by means of repeated drawing; ever fewer curves and edges remain relevant:
“These are all selective, reductive processes. I have these drawings somewhere in the book, but then I need the drawing in another booklet. So ultimately, I draw the same outlines or shadows again and again, developing and abbreviating the forms again.”
Memory produces vagueness. The forms demand that their legibility and appropriation be assessed. By dealing with them, they become confidantes; sometimes they refuse approach, but also this attribution. They inevitably become their own authorities.
But Maja Behrmann’s figures seldom stand alone. When they encounter each other, a field of tension arises, composed of attachments and dissociations, proximity and distance – a rehearsal stage to feel out the possibilities of acquaintanceships. Whether in two dimensions or set up in space, the figures and their fragments interact with each other.
Possibilities of gatherings and open spaces are played through and parsed. By being limited to an alphabet of shapes, valid formulations can found at least in the short term and social interactions can be mirrored and comprehended. Perhaps it is the concept of leeway that Maja Behrmann scenically investigates in her pictorial spaces and arrangements:
“Space and interstice is always a shape, a negative form, and I take this willingly up immediately, also. At the same time, it is an external description that one can take in as much as what the figure has of inherent presence: the feeling that it conveys.”
They pile up, grow together, and combine. Some shapes or figures are closer to Maja Behrmann for a certain time: if they were all the same, it would be disconcerting.
Translation: Mitch Cohen