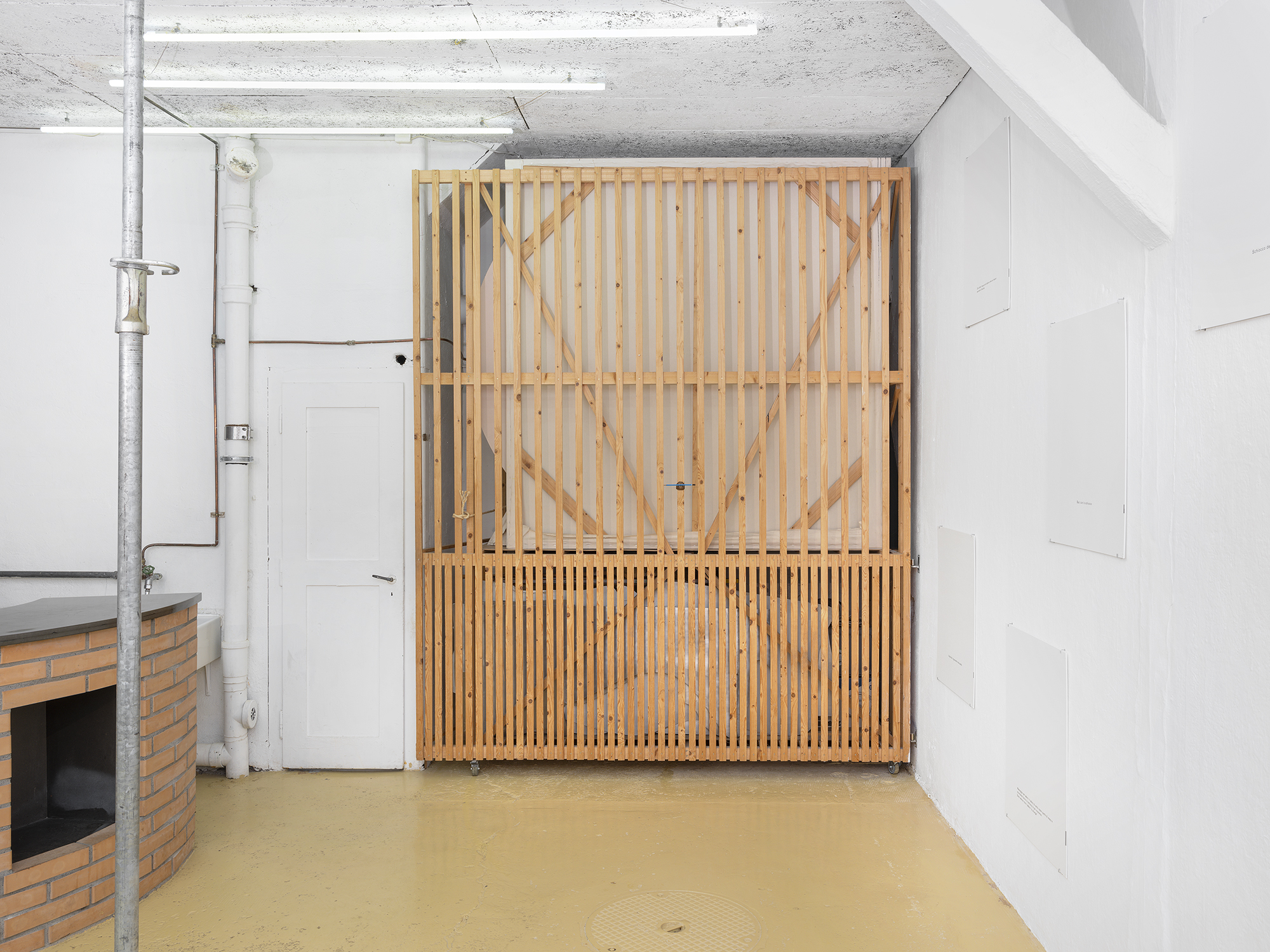 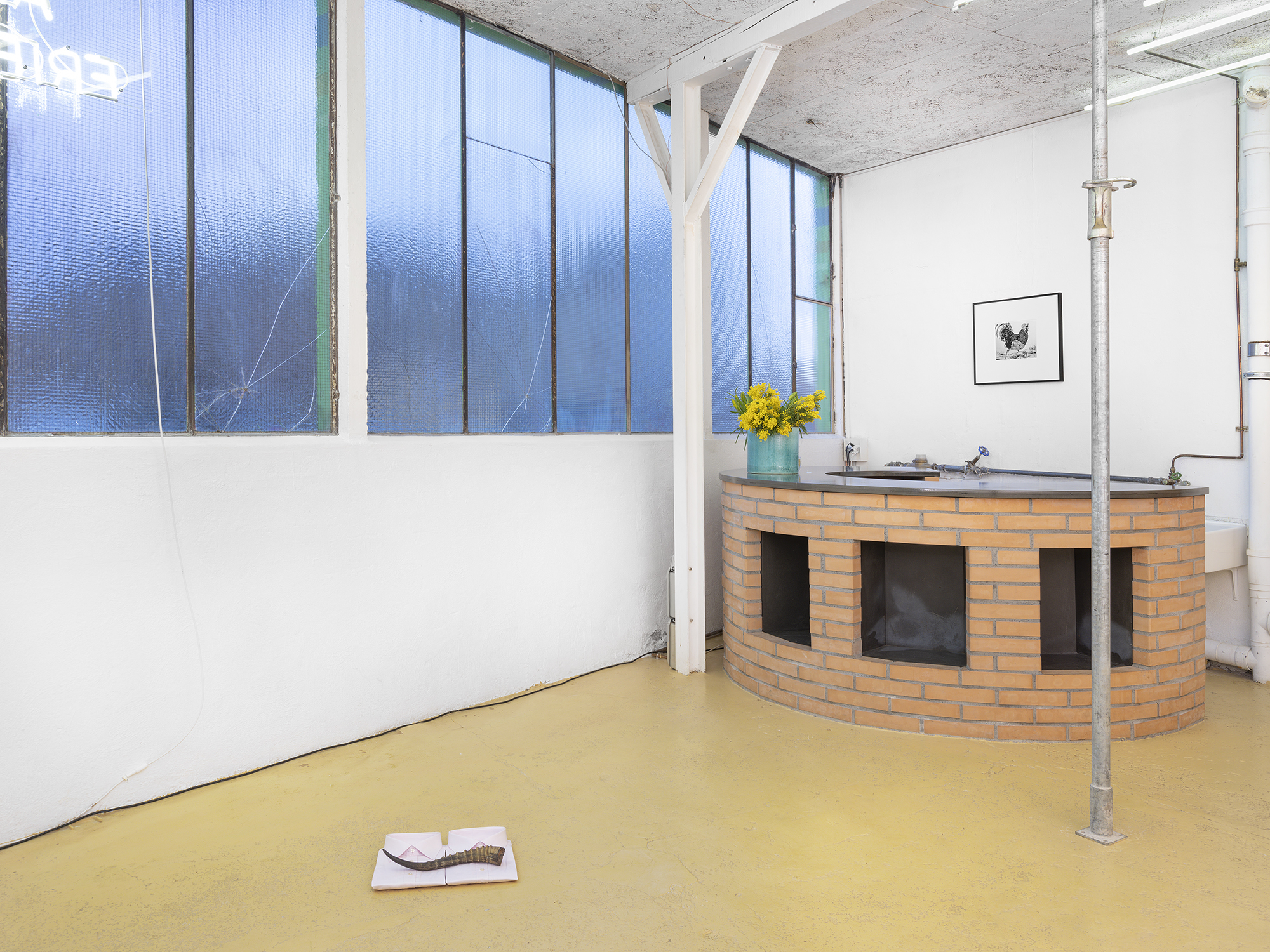 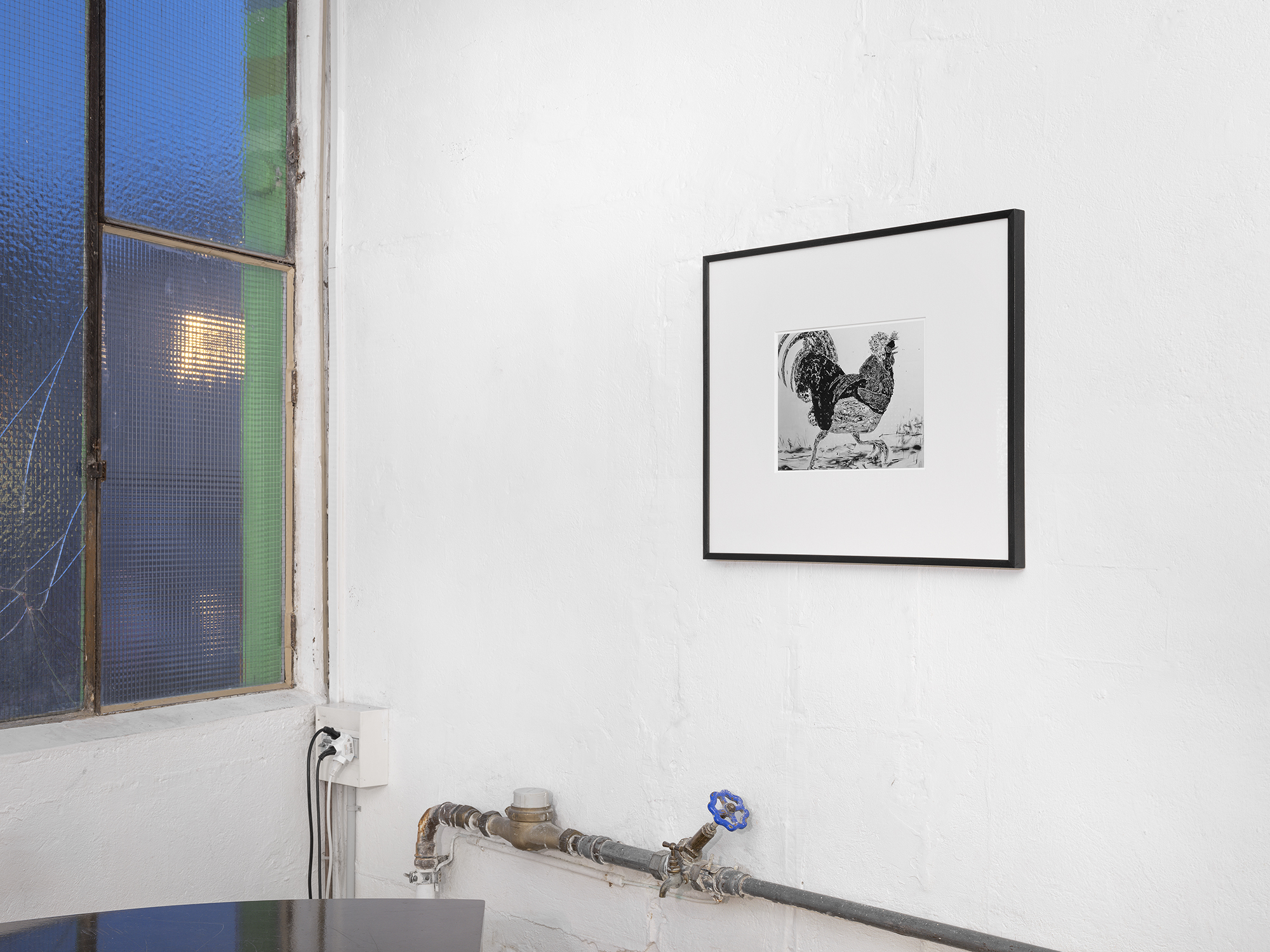 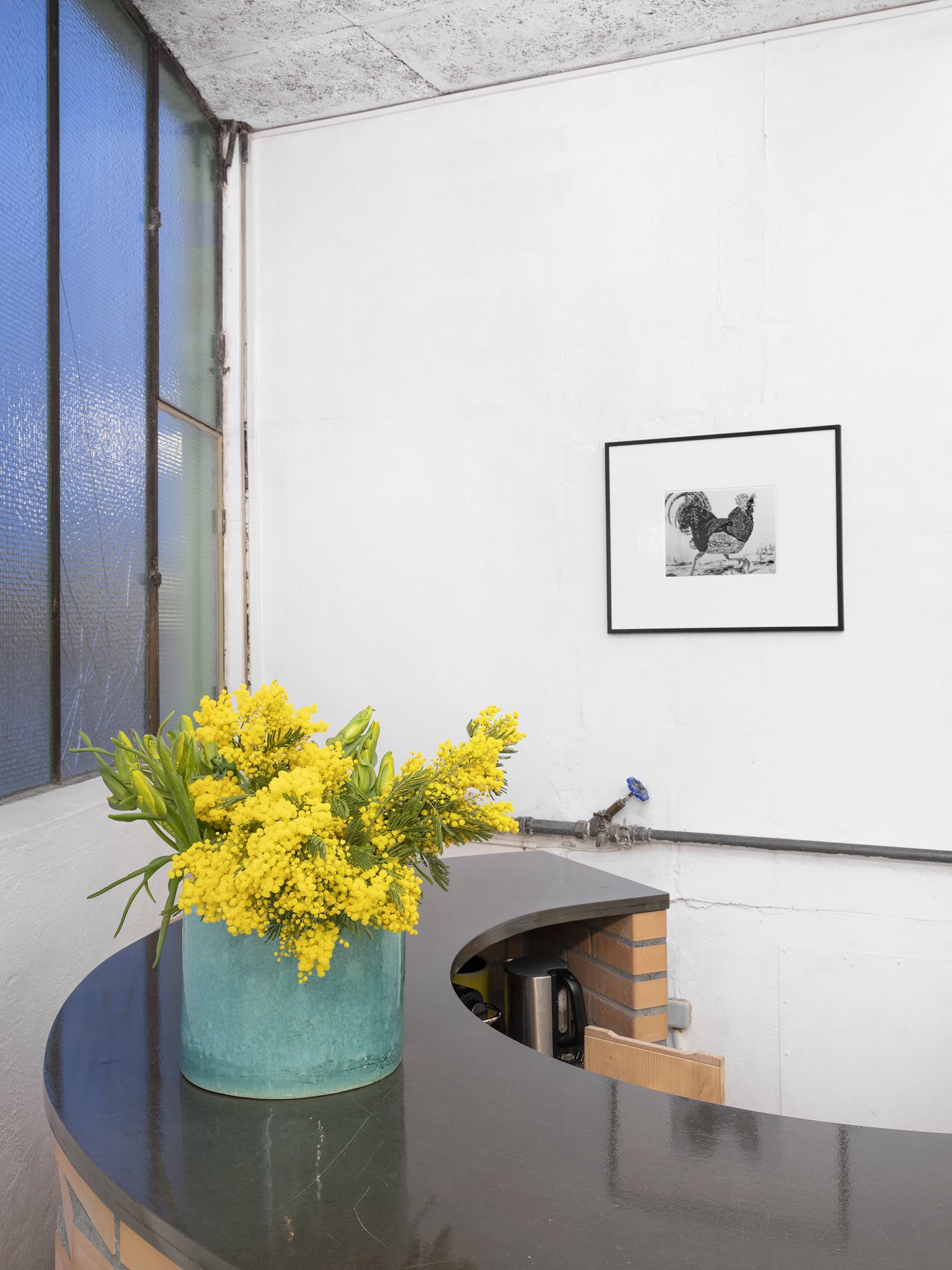 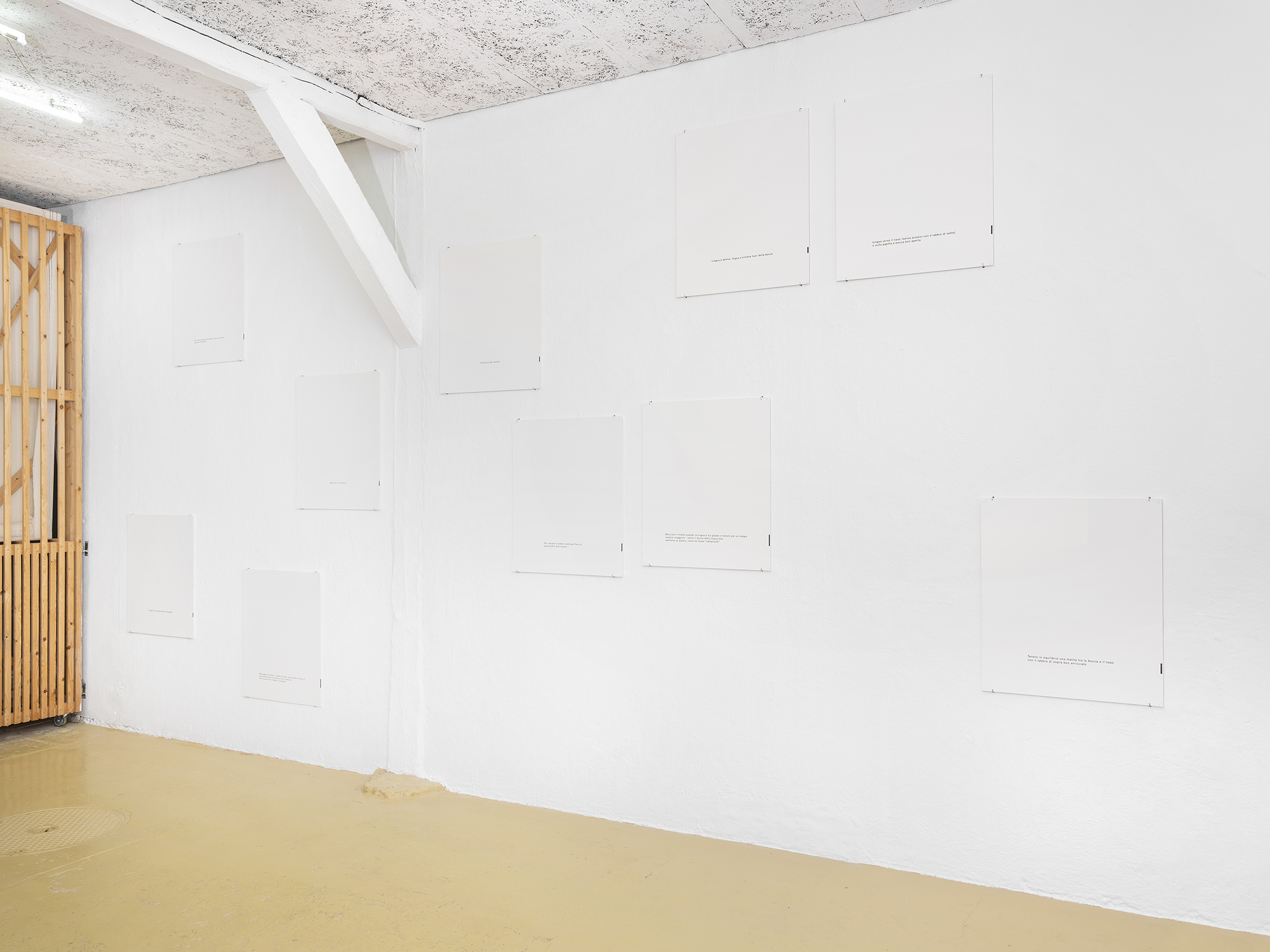 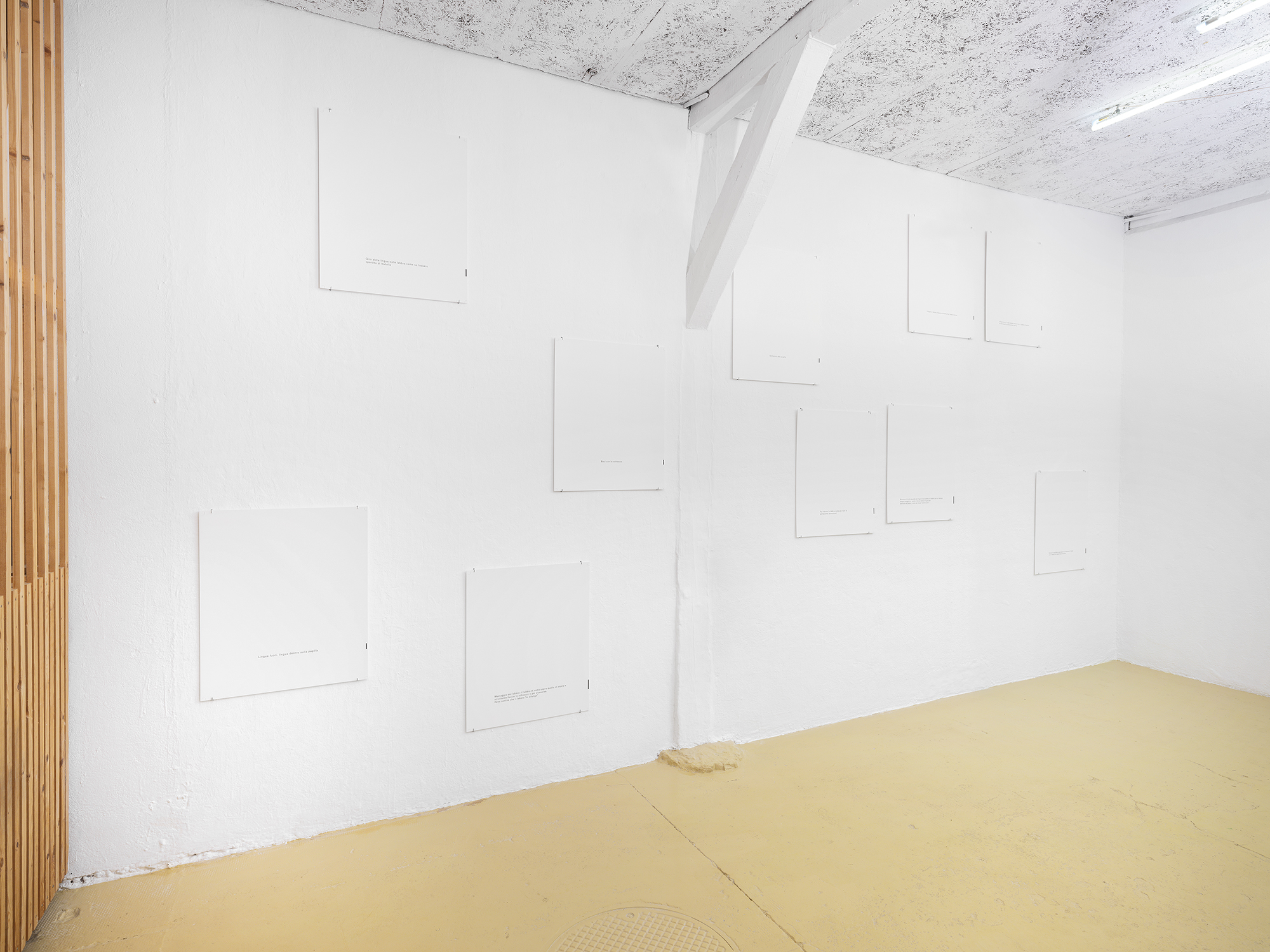 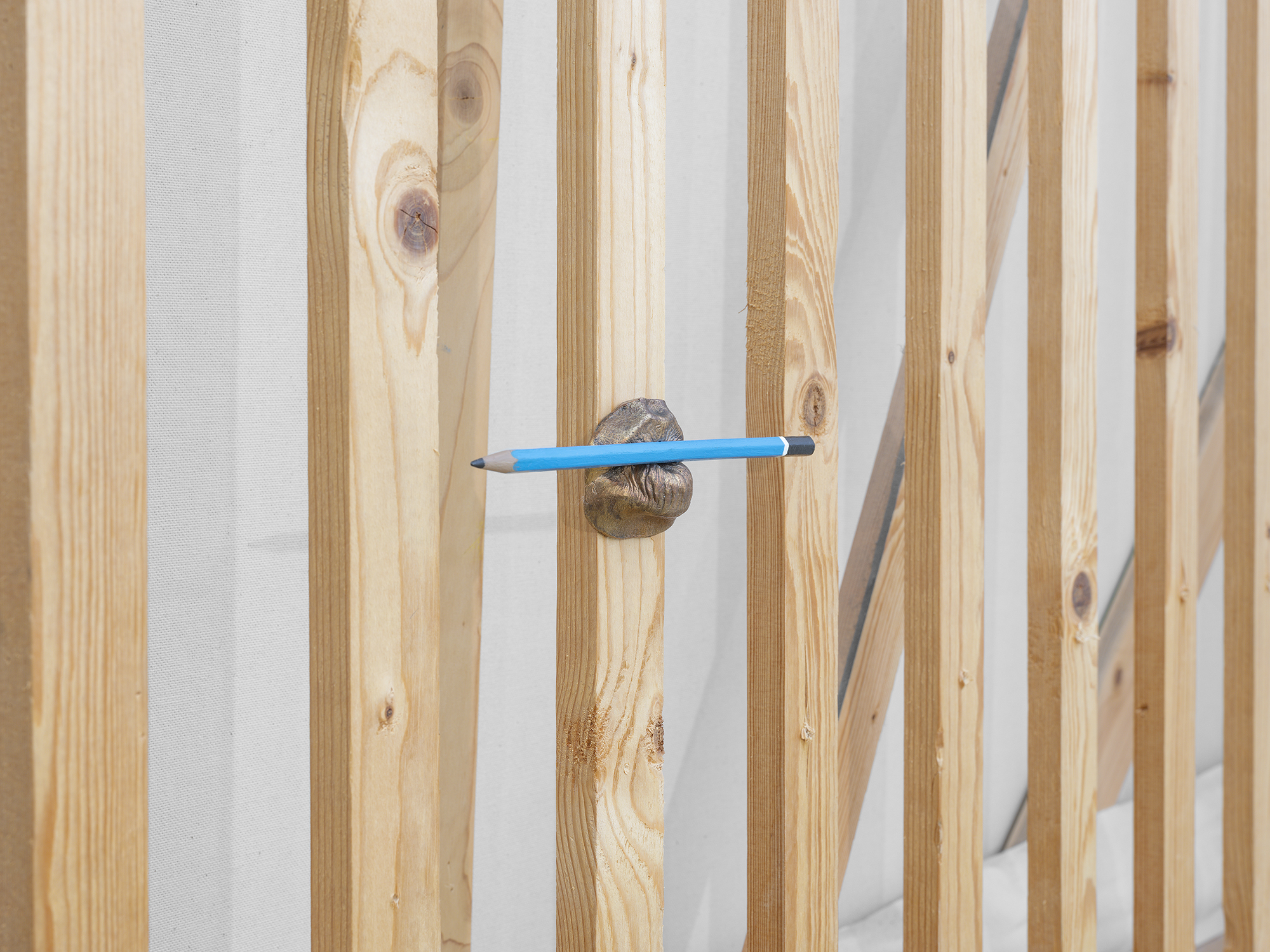 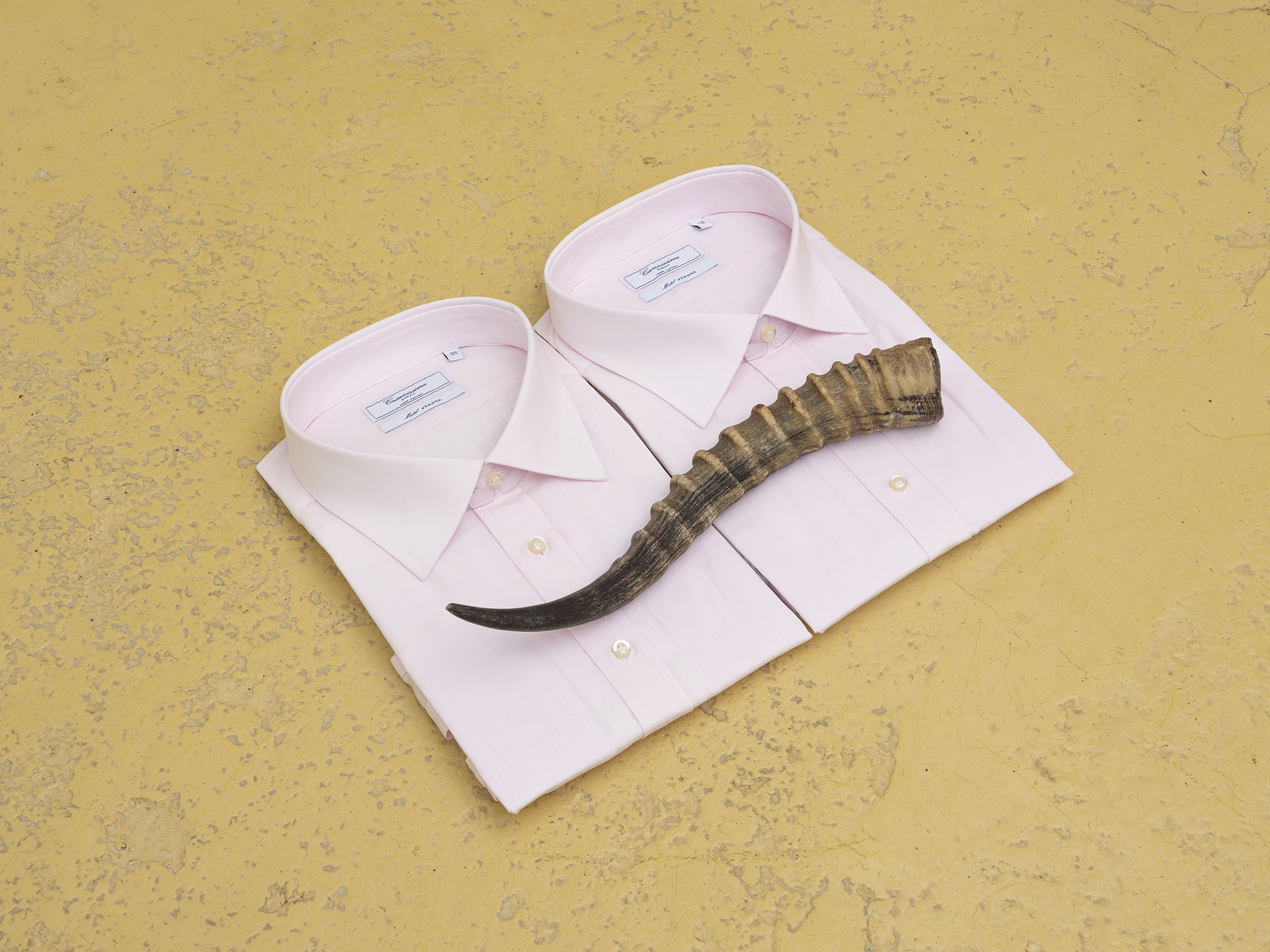 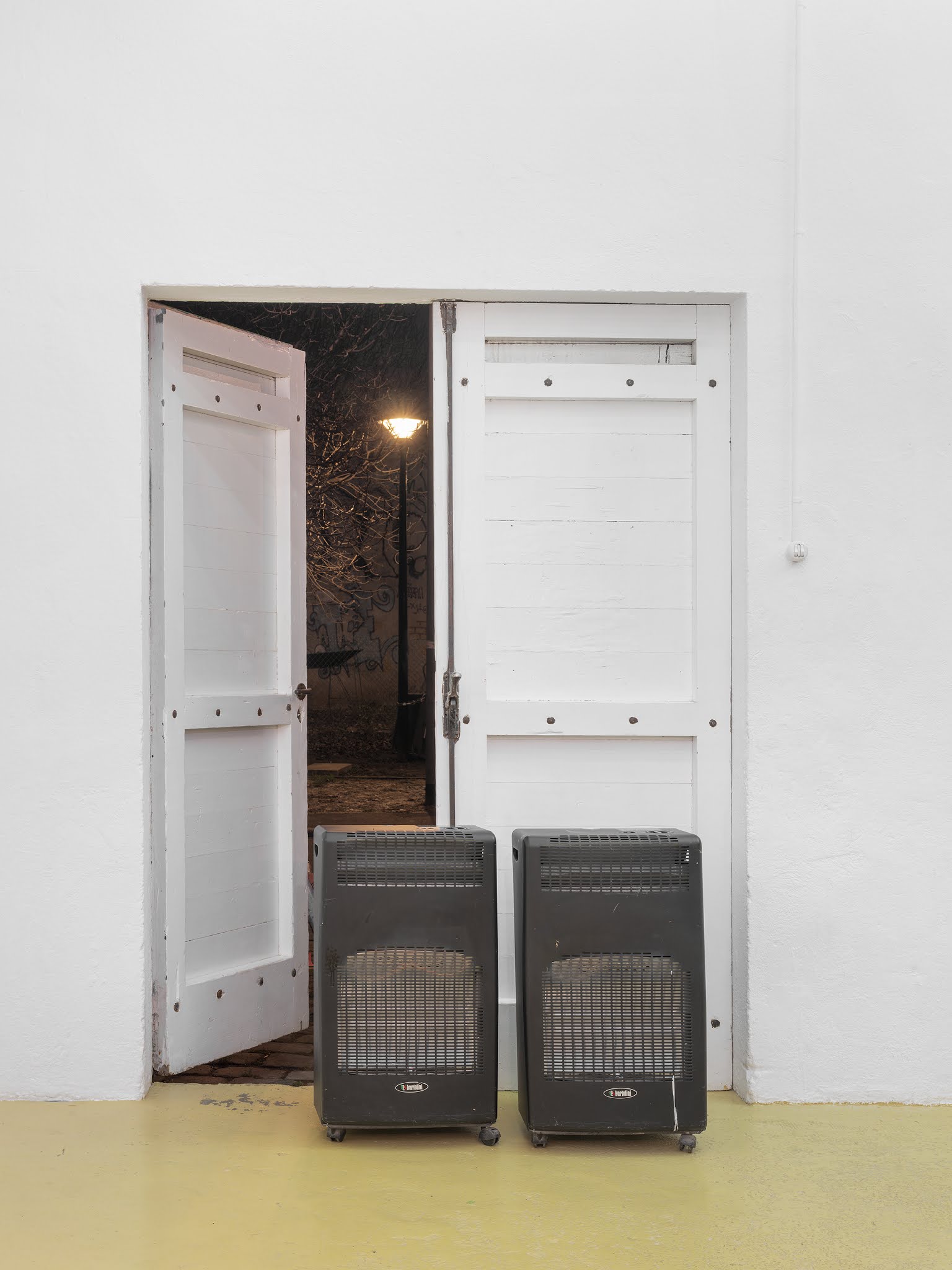 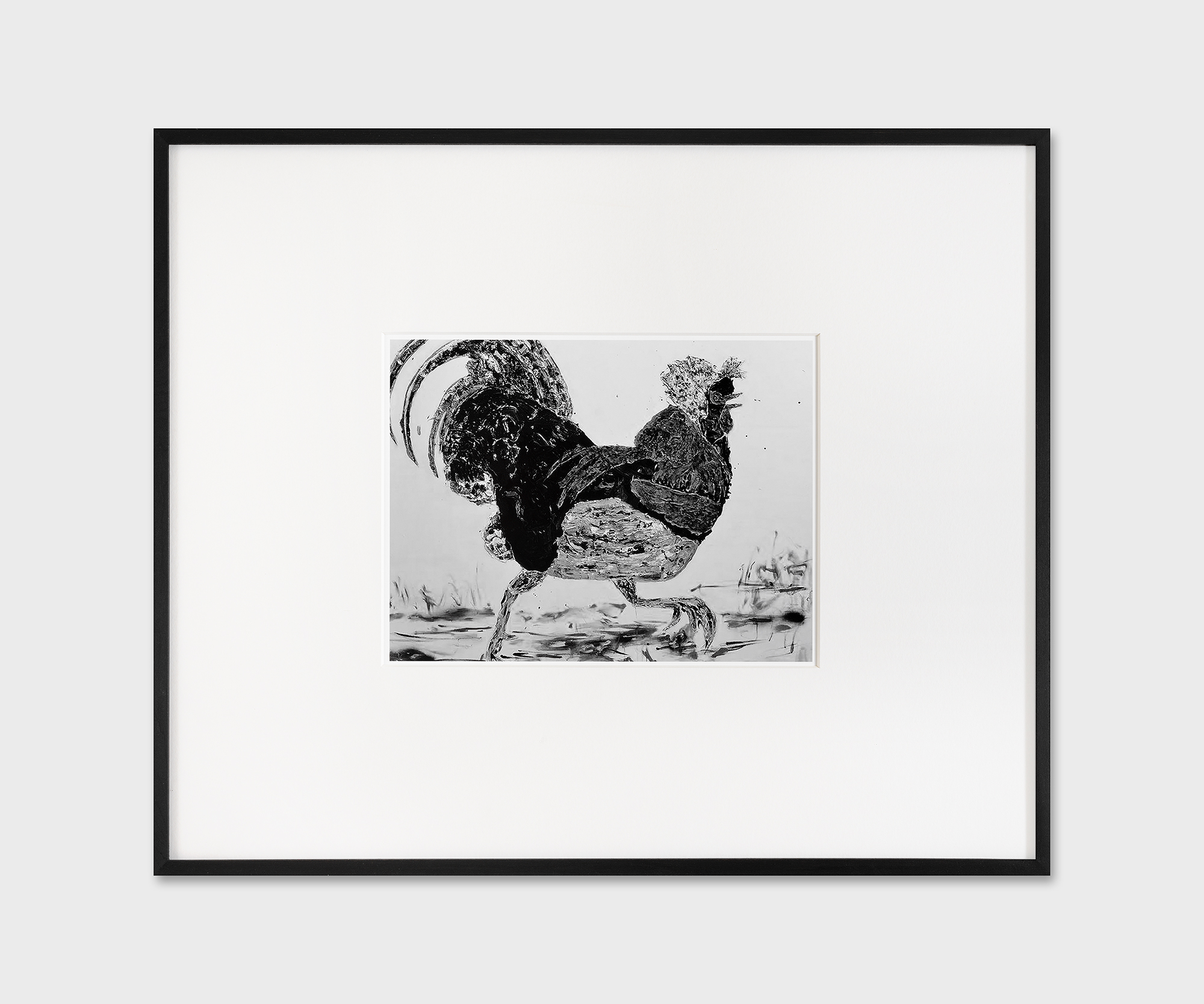 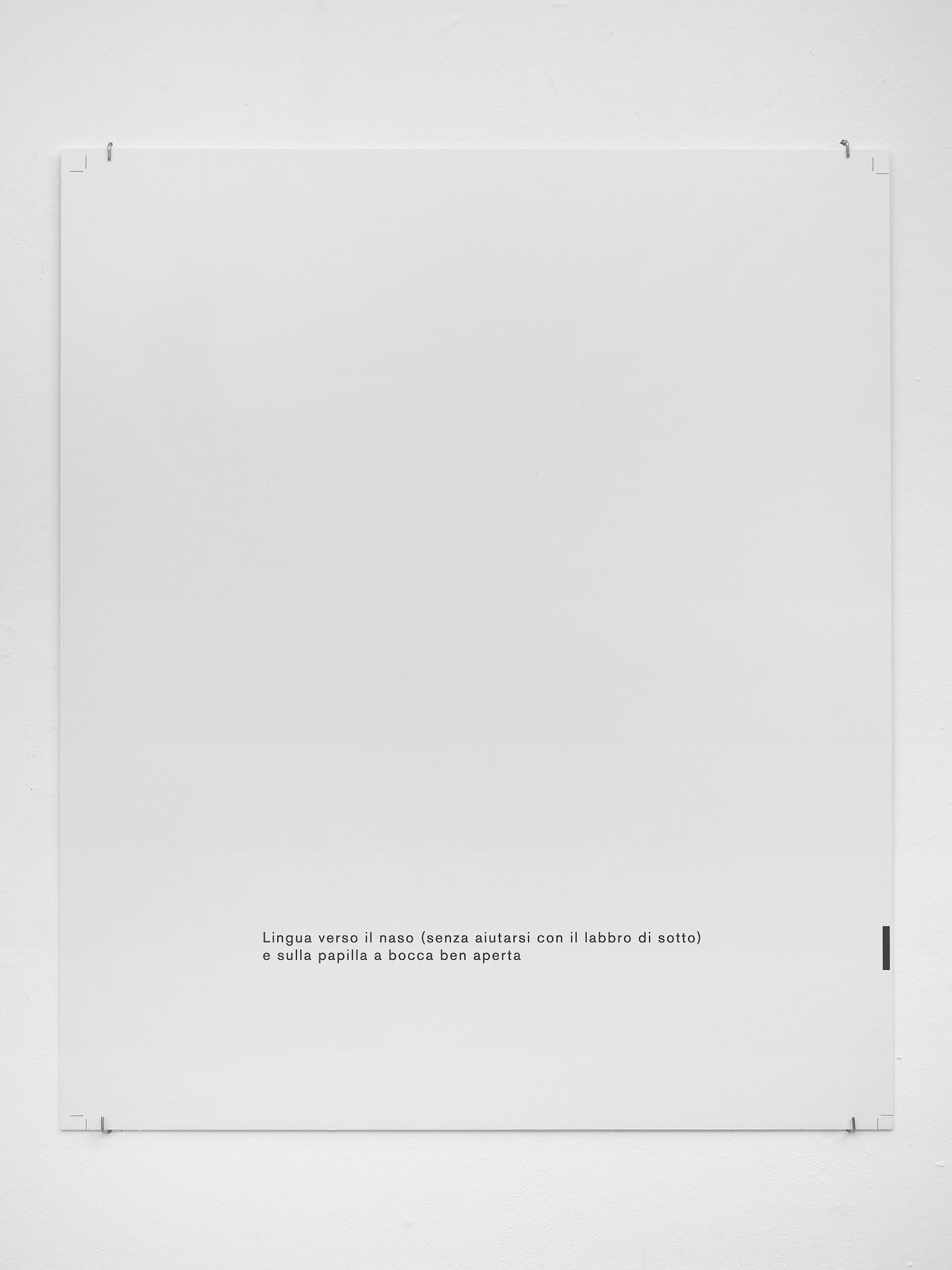 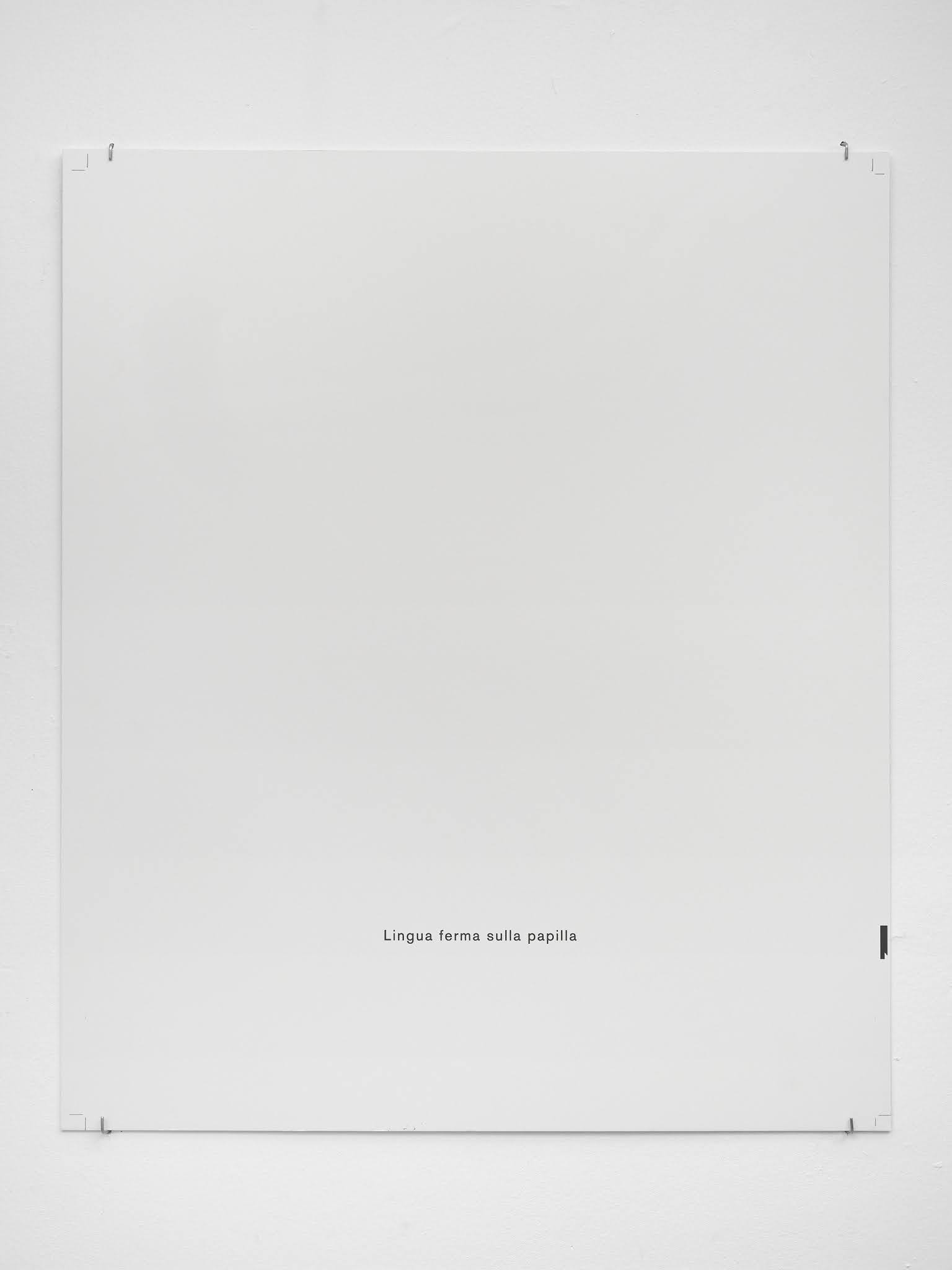 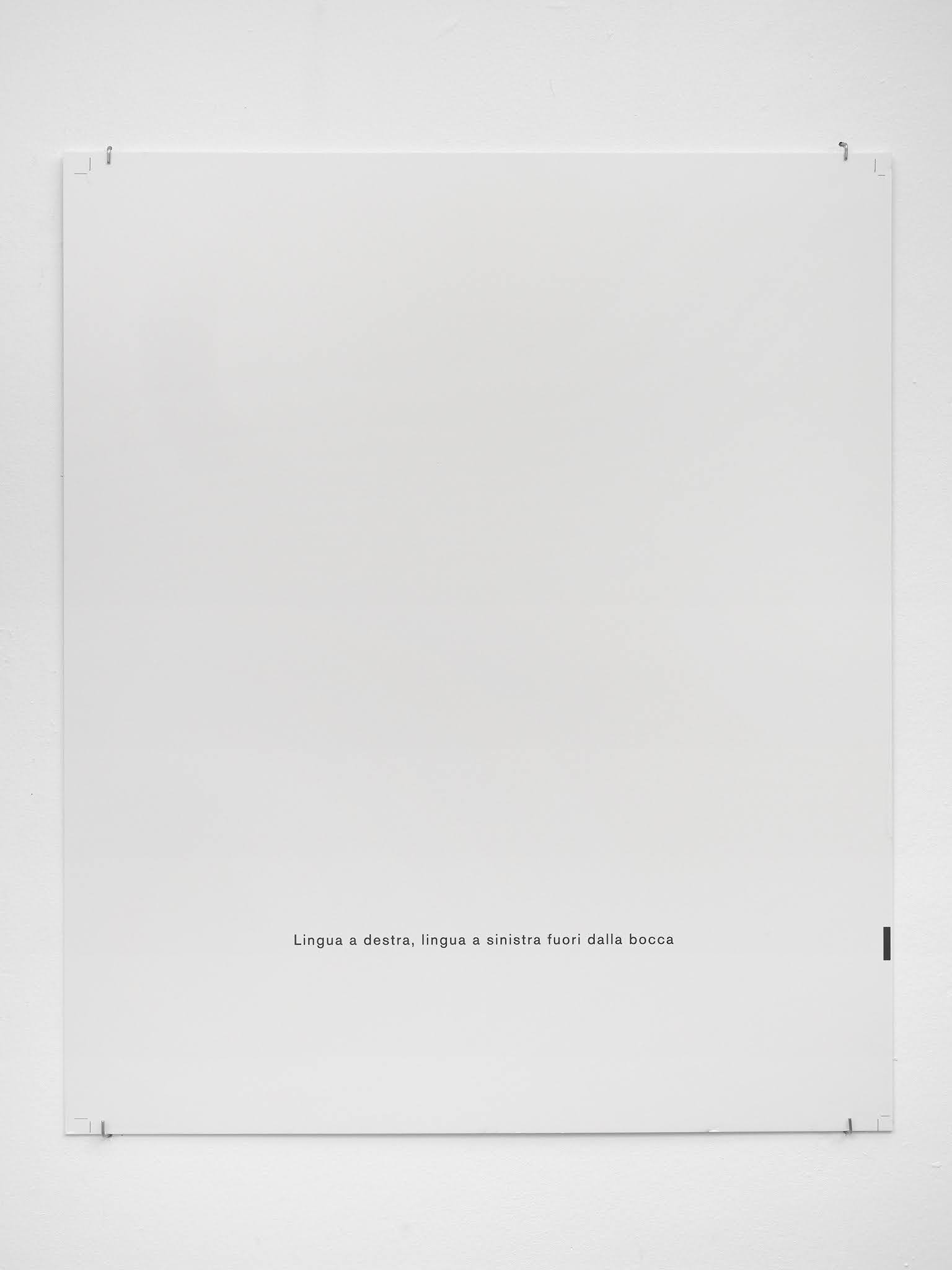 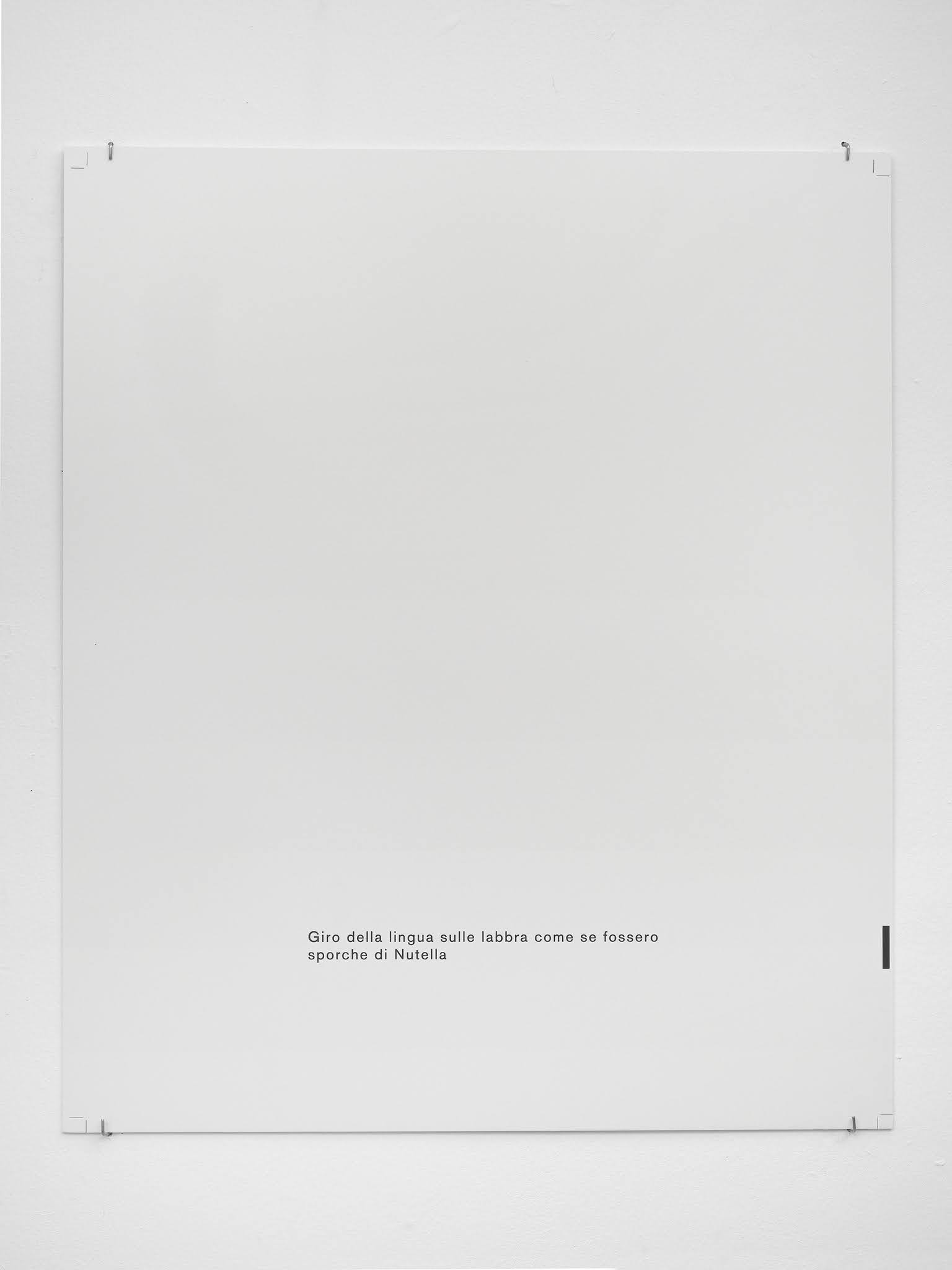 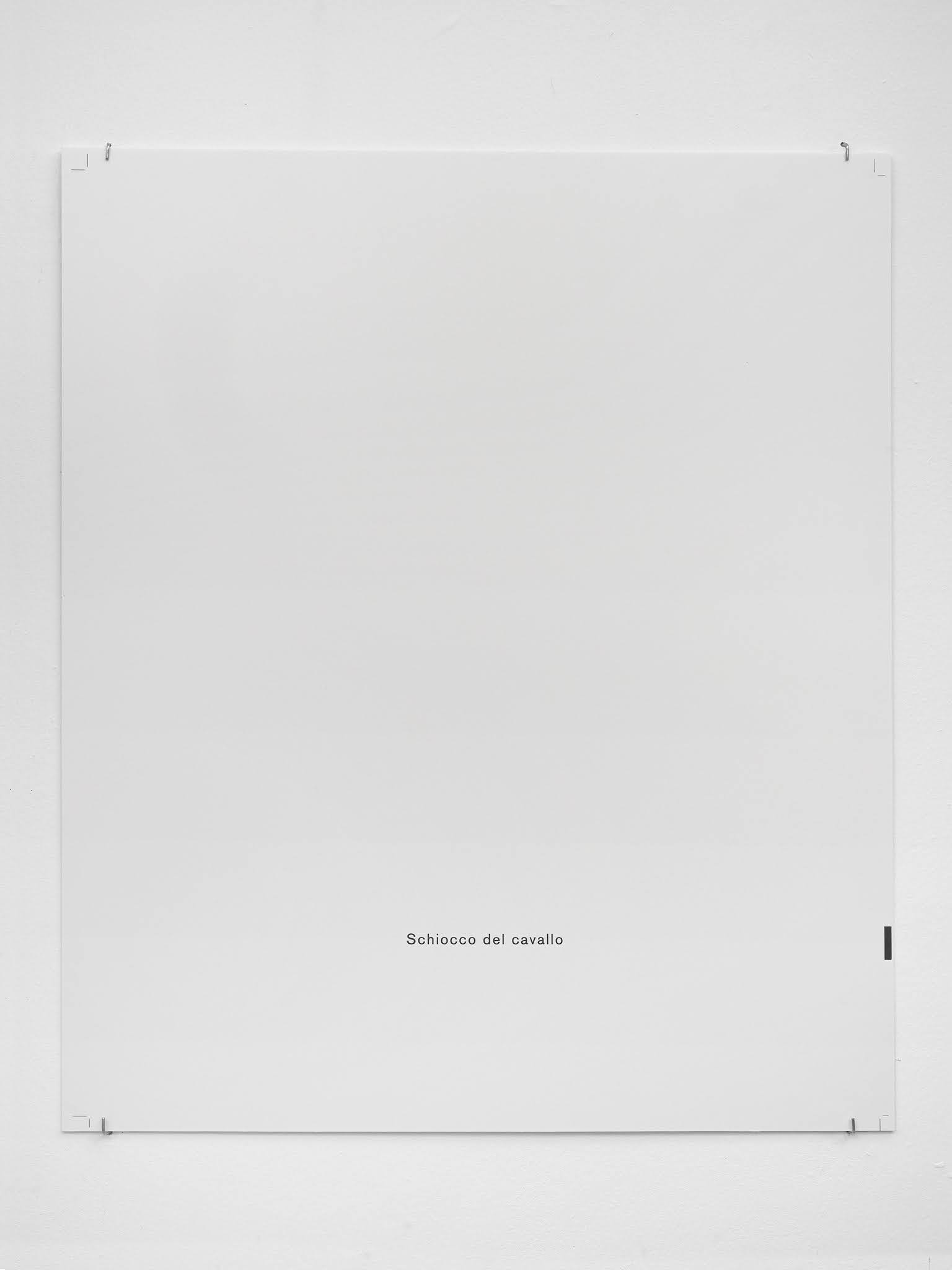 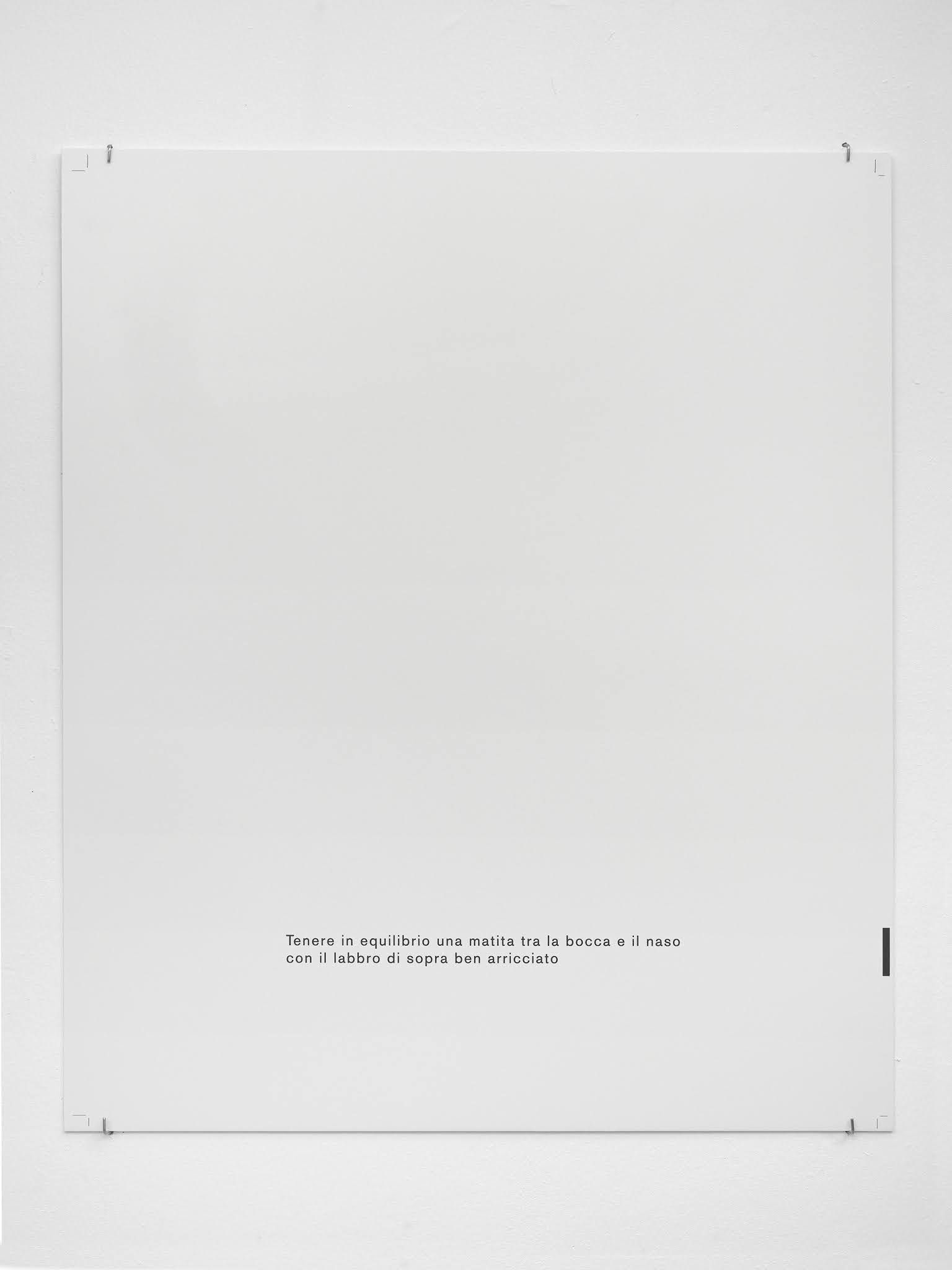 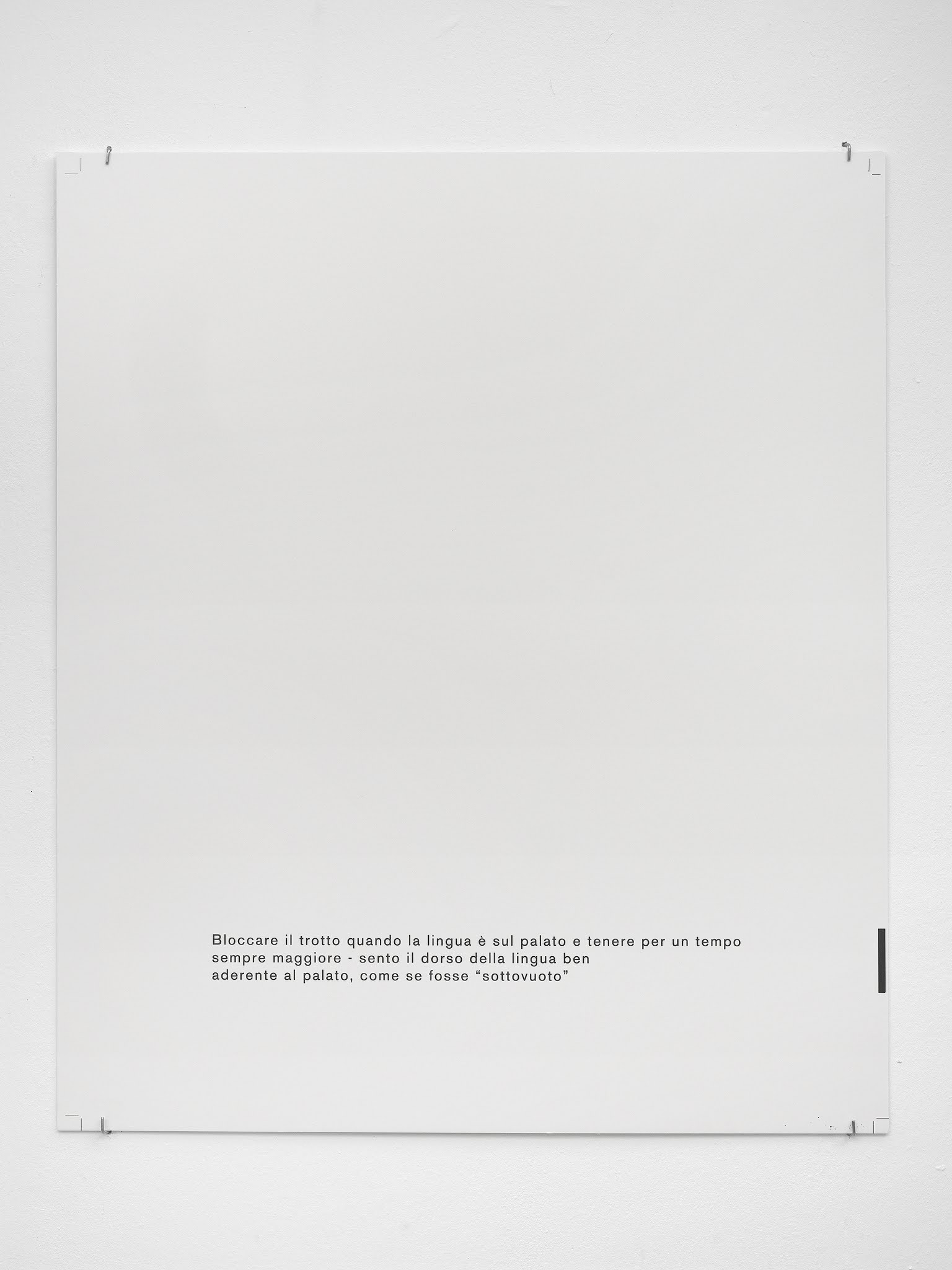 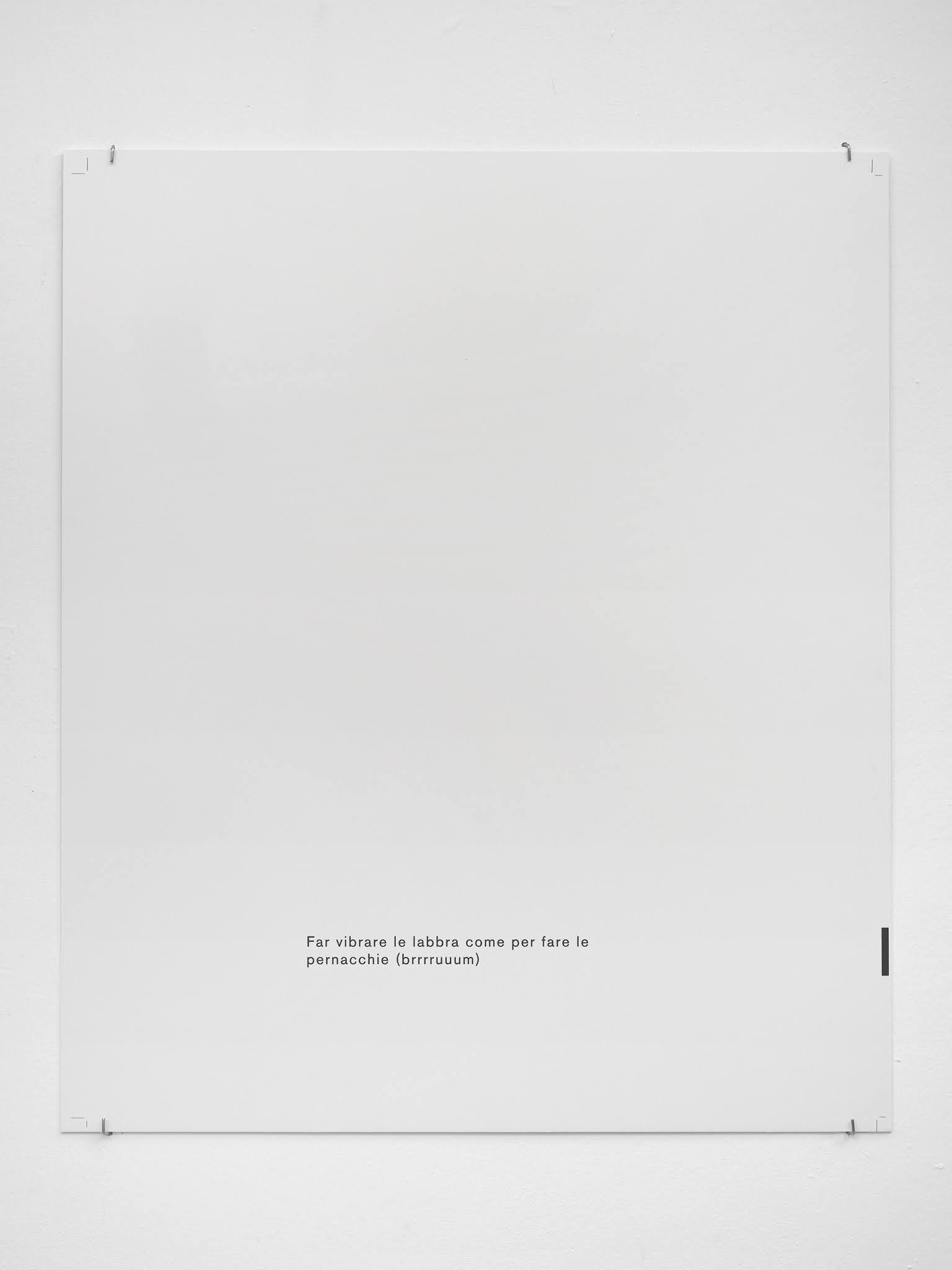 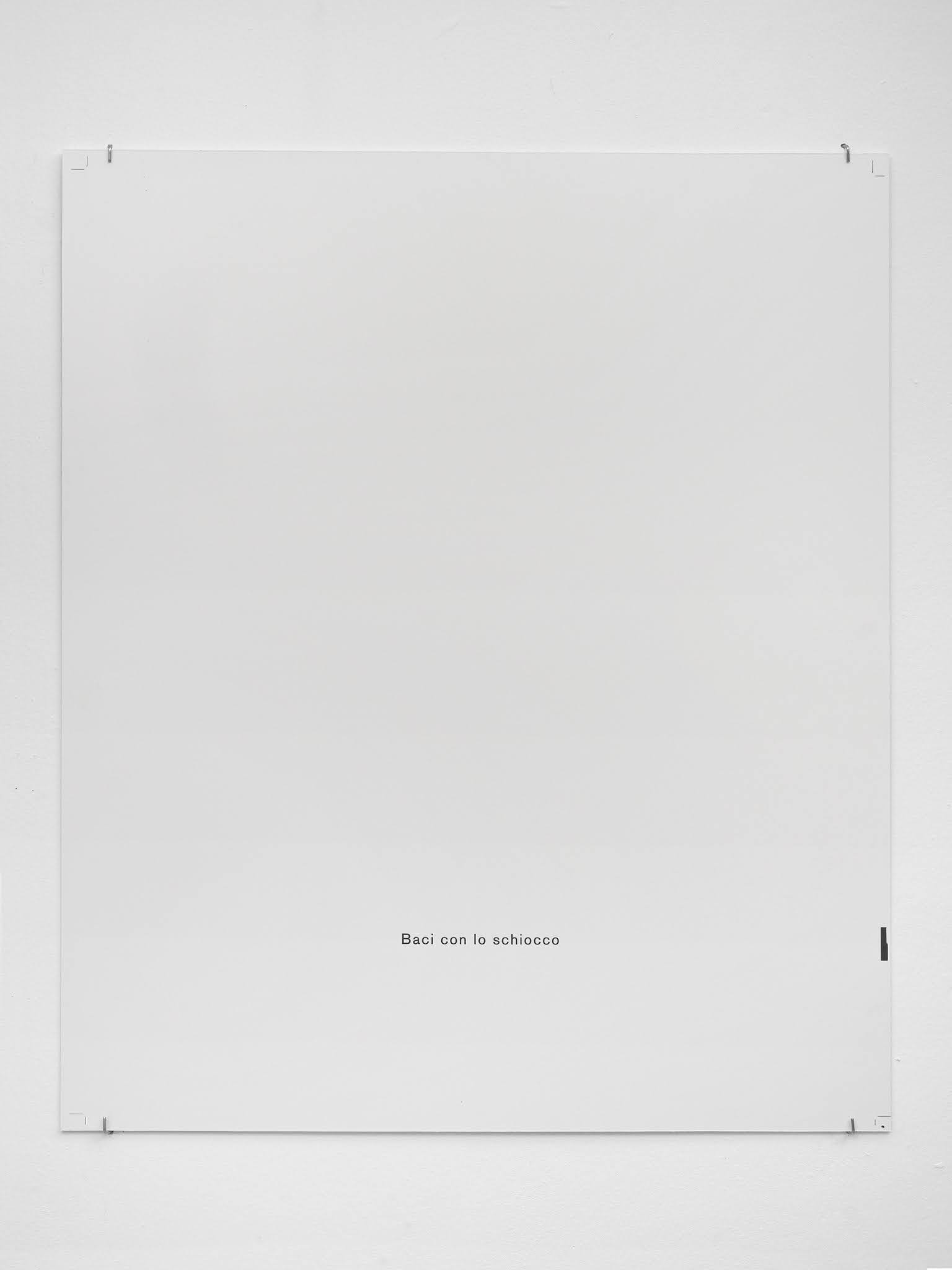 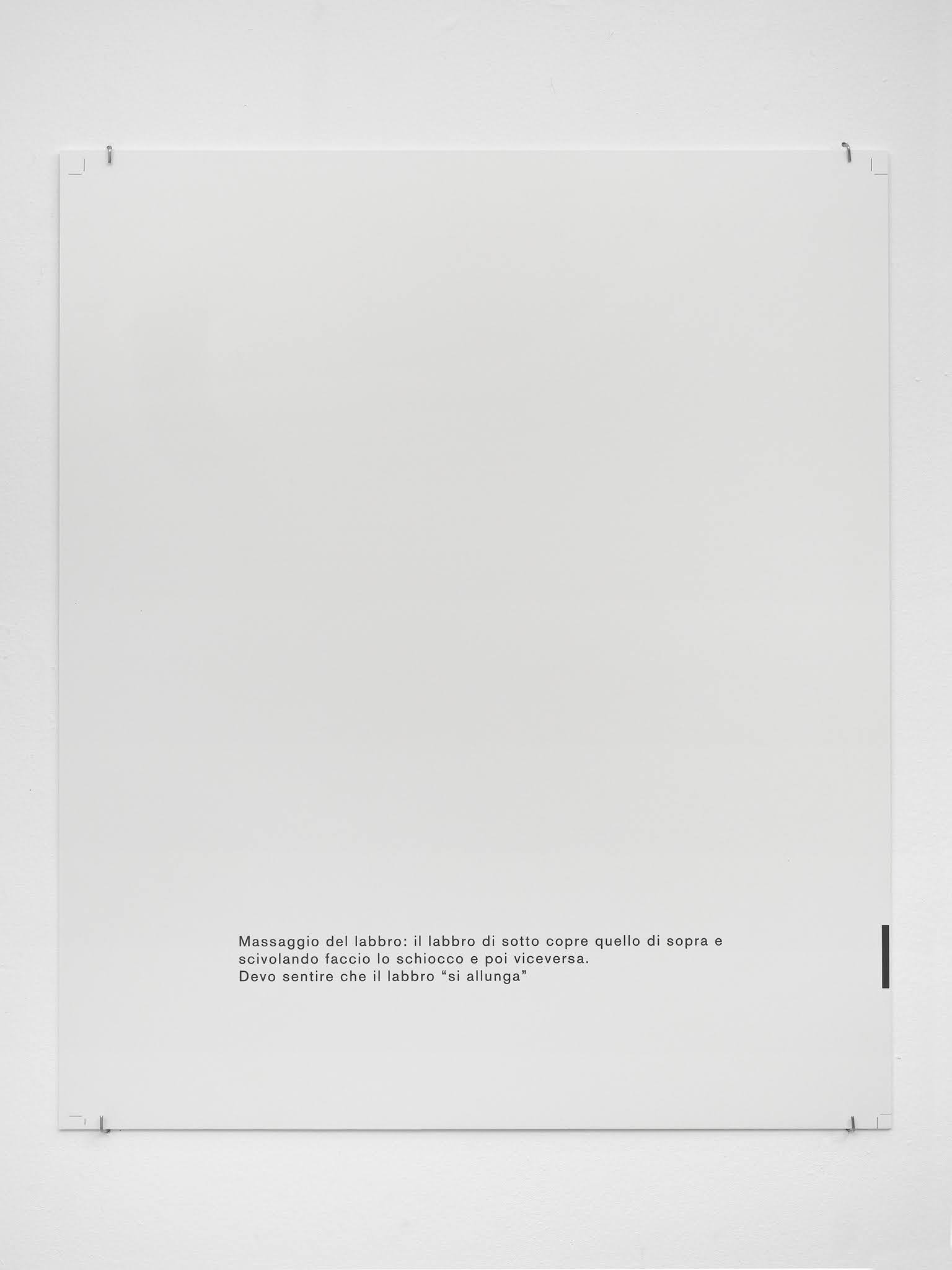 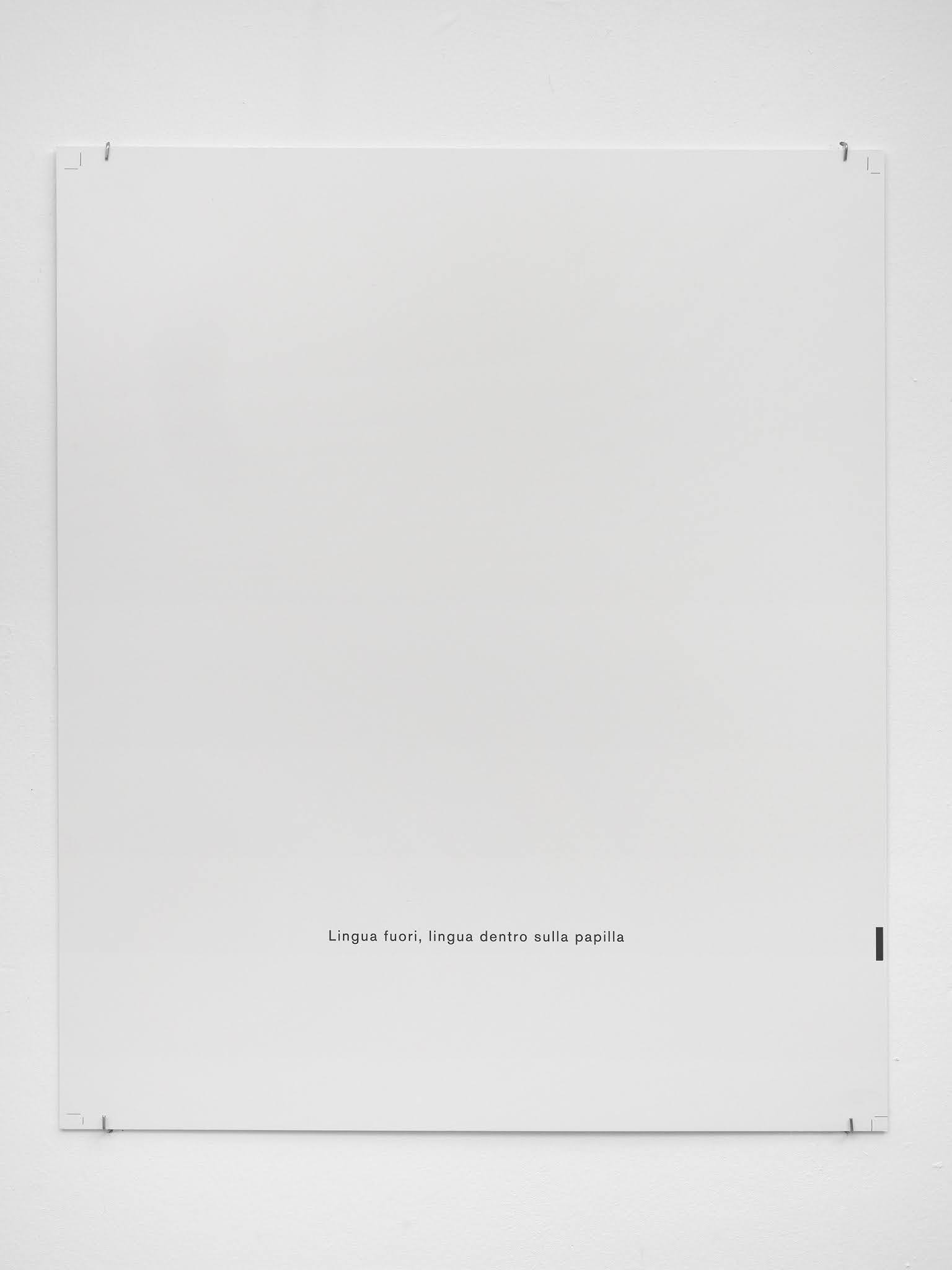 Alfredo Aceto raises the question of the body and its metamorphoses. Recently forced to re-educate the muscle of his tongue, he experiences the return to oral learning yet acquired during his youth. This orality obtained so distantly seems to be innate since its second nature application absorbs the memory of initiation. His relearning then brings a gestural and poetic awareness, catalyst for this exhibition.
The series Esercizi Muscolature Orofacciale per Artisti is a series of exercises written initially by Doctor Daniel Garliner. Although designed for these same myofunctional diseases and used for clinical purposes, these short ritornellos borrow images and codes specific to the universe of infancy and tale. Onomatopoeia, images or metaphors, they mobilize more meaning than they claim to boost and replay the return trip taken recently by the artist in childhood learning. Industrially screen-printed, these sentences intervene as separately existing poems, but their seriality incorporates the idea of a heady melody.
The bronze Bocca con Matita takes up one of the screen-printed exercises. If the body was, until then, present by writing, he is clearly visible here and also addressed by his sexualization and his fetishism. The mouth is forced to coexist with the formal rigor of the pencil that brings back the question of writing, but this time blocks the develop-ment of ideas and speeches.
As regards the piece titled Fabian Marti, it fulfils the role of the image in the exhibition. The chicken, beak open, seems to take up the idea of expression, singing and sound. A room that silently mimics its noisy appearance. Close by, silkscreen prints can act as labels, which by multiplying themselves broaden the possibilities of the image. Getting out of the exhibition space, an urban chicken house emphasizes in an almost tautological way the notion of transfer and metamorphosis present within the exhibition. The hen that mimicked its relative existence, now reproduces its environment.
If throughout the exhibition the body is always implied, but present, d’Angleterre underlines here his absence. Like the Felix Gonzalez-Torres’ empty bed, marked by the recent suggested presence of two bodies, these immaculate shirts embodies the reunion of two people in love. This assisted ready-made integrates as well as Fabian Marti, a latent animality.
Laurence Favez Jeandin
Alfredo Aceto was born in 1991 in Turin, Italy. He lives and works in Lausanne.
Former student of Philippe Decrauzat and Valentin Carron at ECAL (Ecole Cantonale d’Art de Lausanne), Alfredo Aceto has exhibited his work at Museo del 900 in Milan, Kunsthaus Glarus and Centre d’Art Contemporain de Genève.In 2021, his work will be introduced at Kunst Halle in Sankt Gallen, L’Ascensore in Palermo, Parliament Unlimited in Paris, Last Tango in Zurich and Bureaucracy Studies in Lausanne. Alfredo Aceto is actually in residency at the Istituto Svizzero in Milan.
Tags Alfredo Aceto, Brains & Bronze, Daily Lazy Exhibition, Geneva, HIT, Laurence Favez Jeandin, solo exhibition, Switzerland
Newer Post Older Post Home