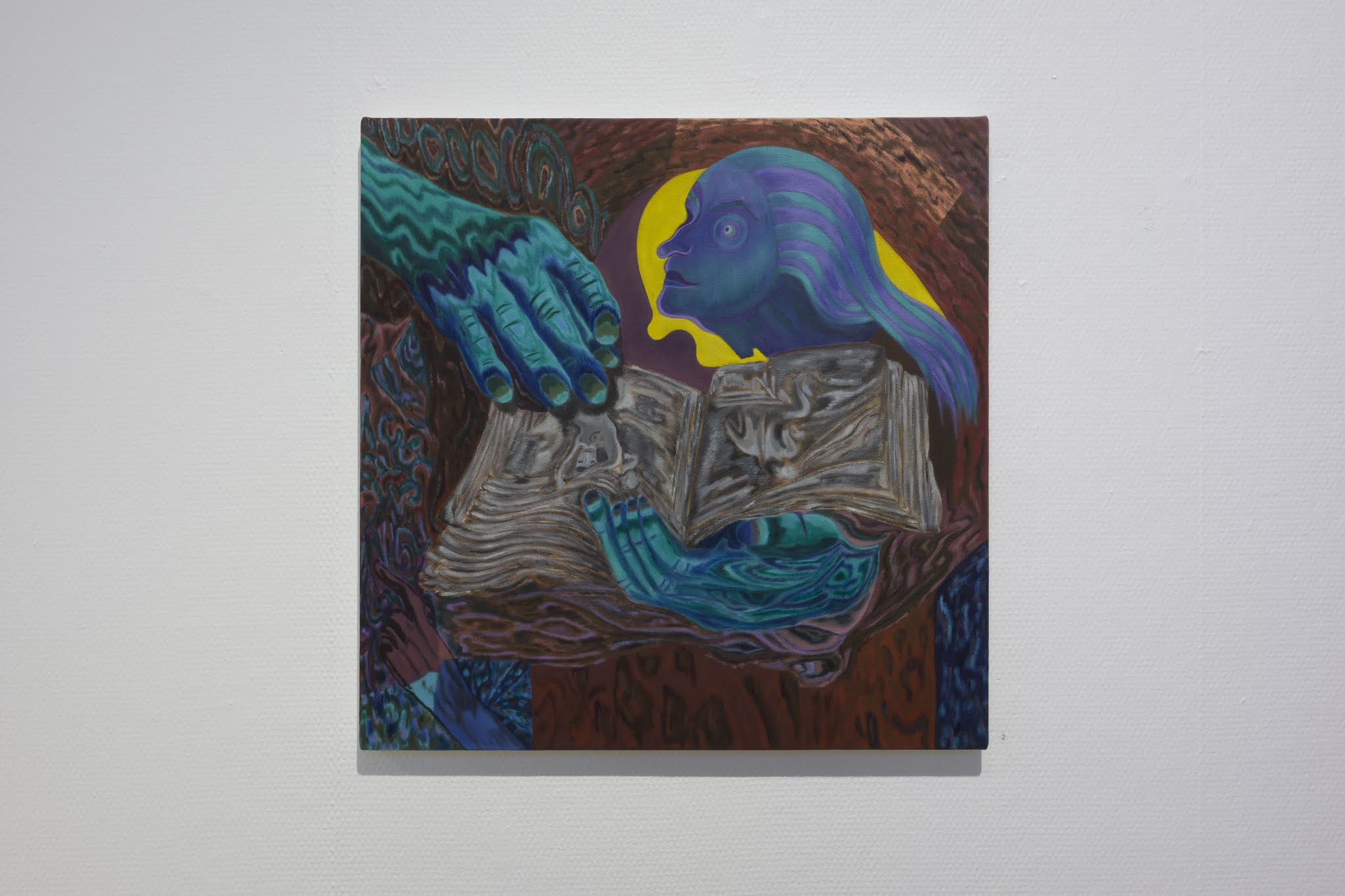 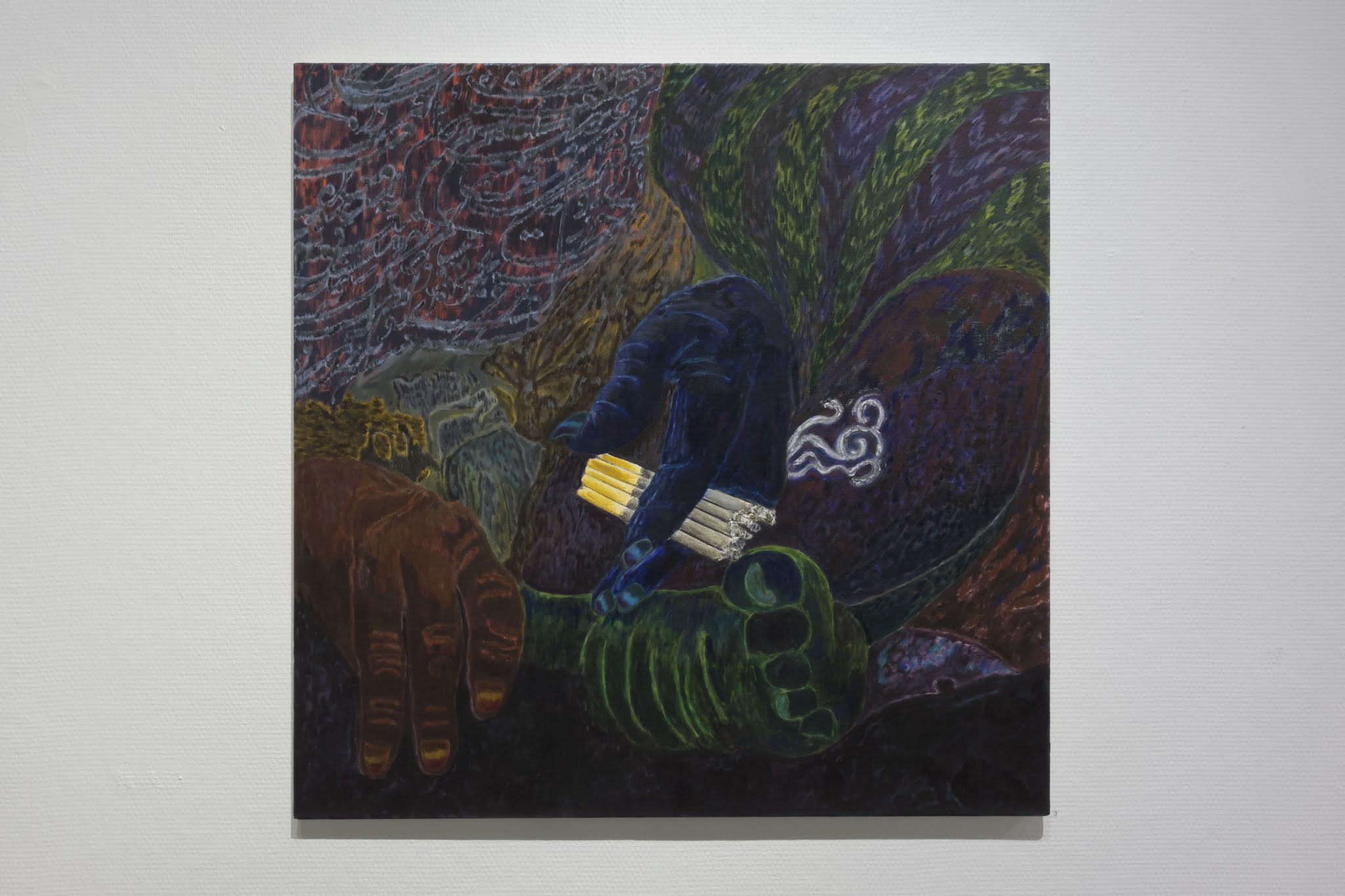 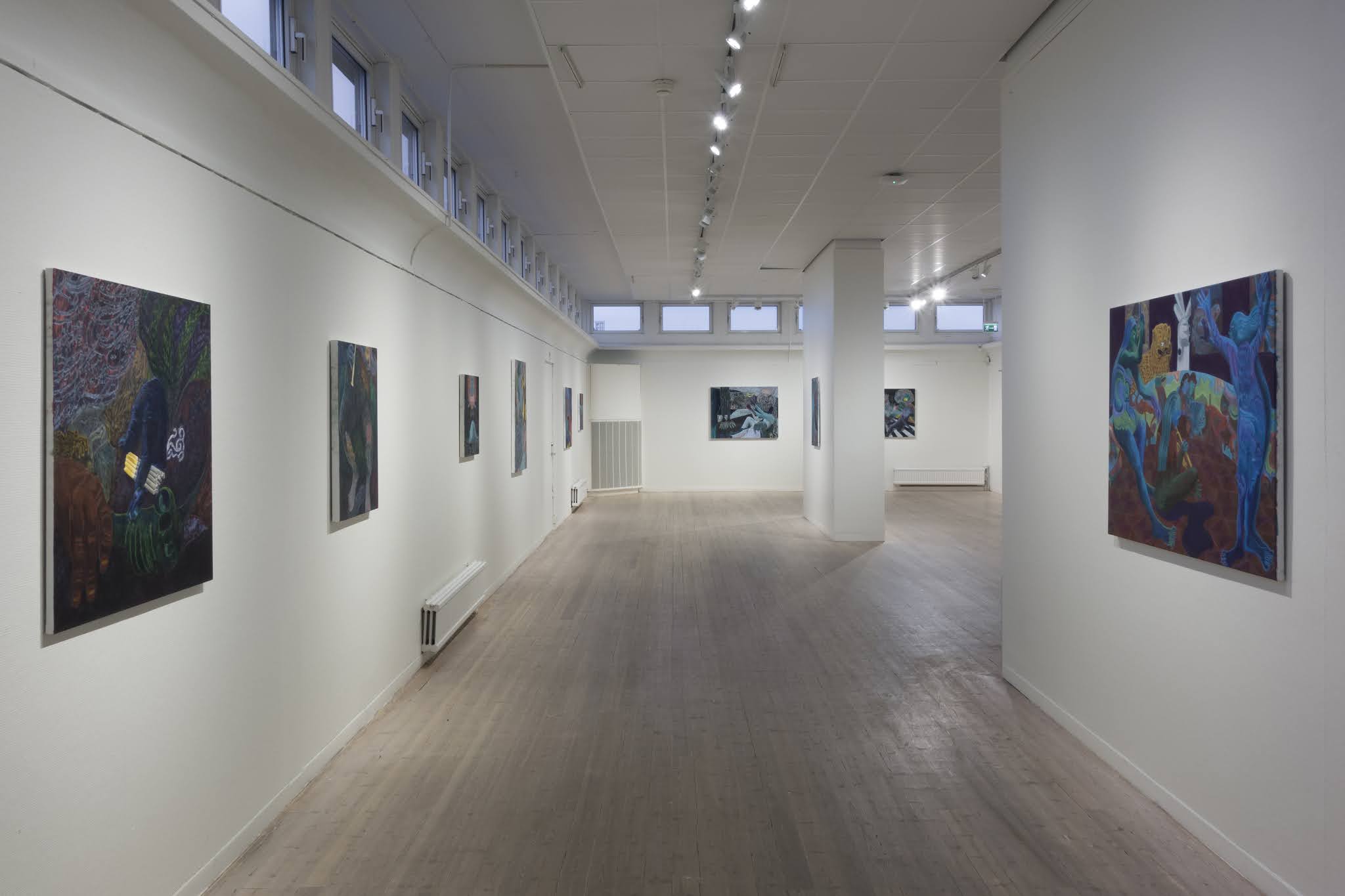 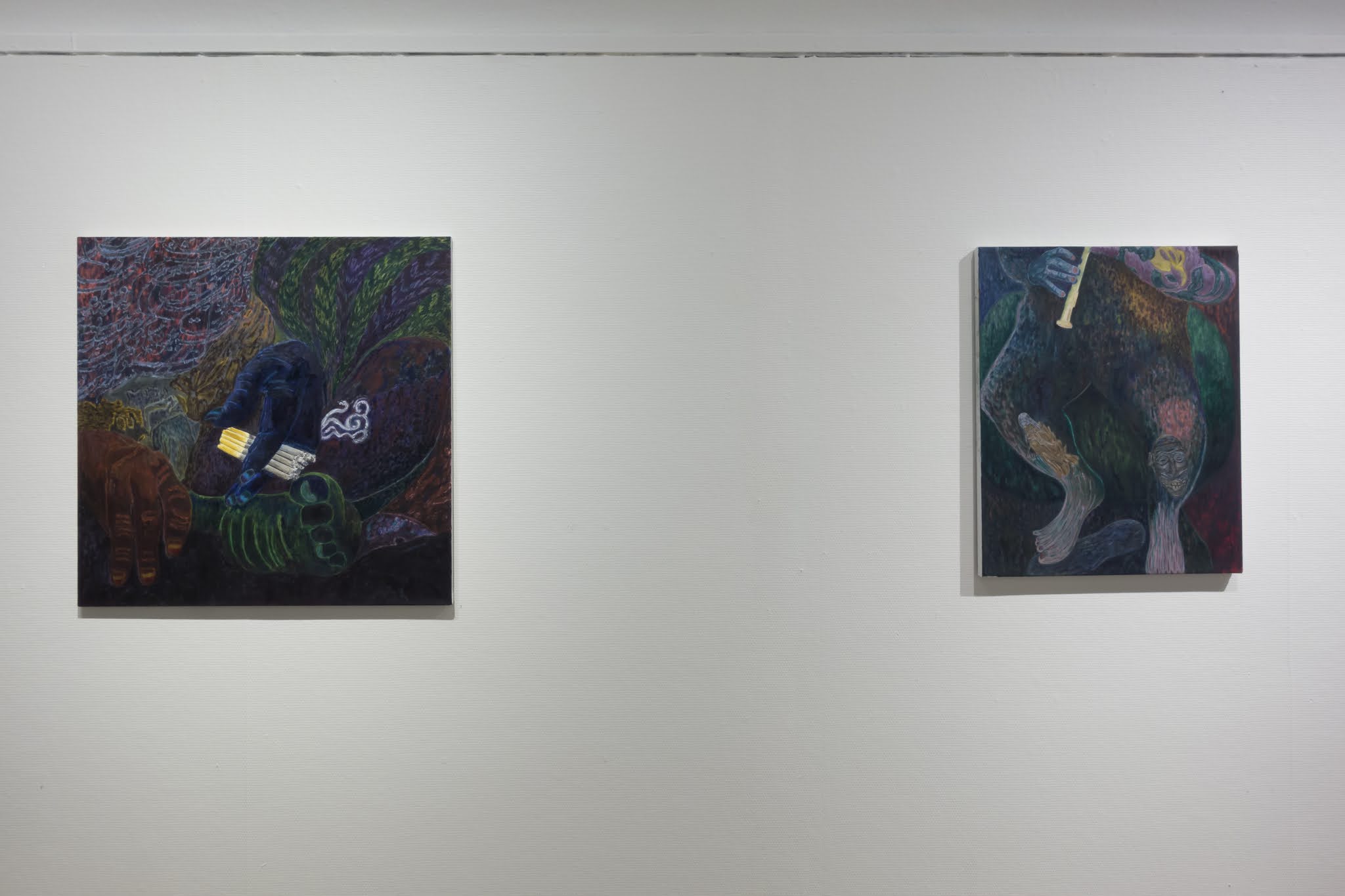 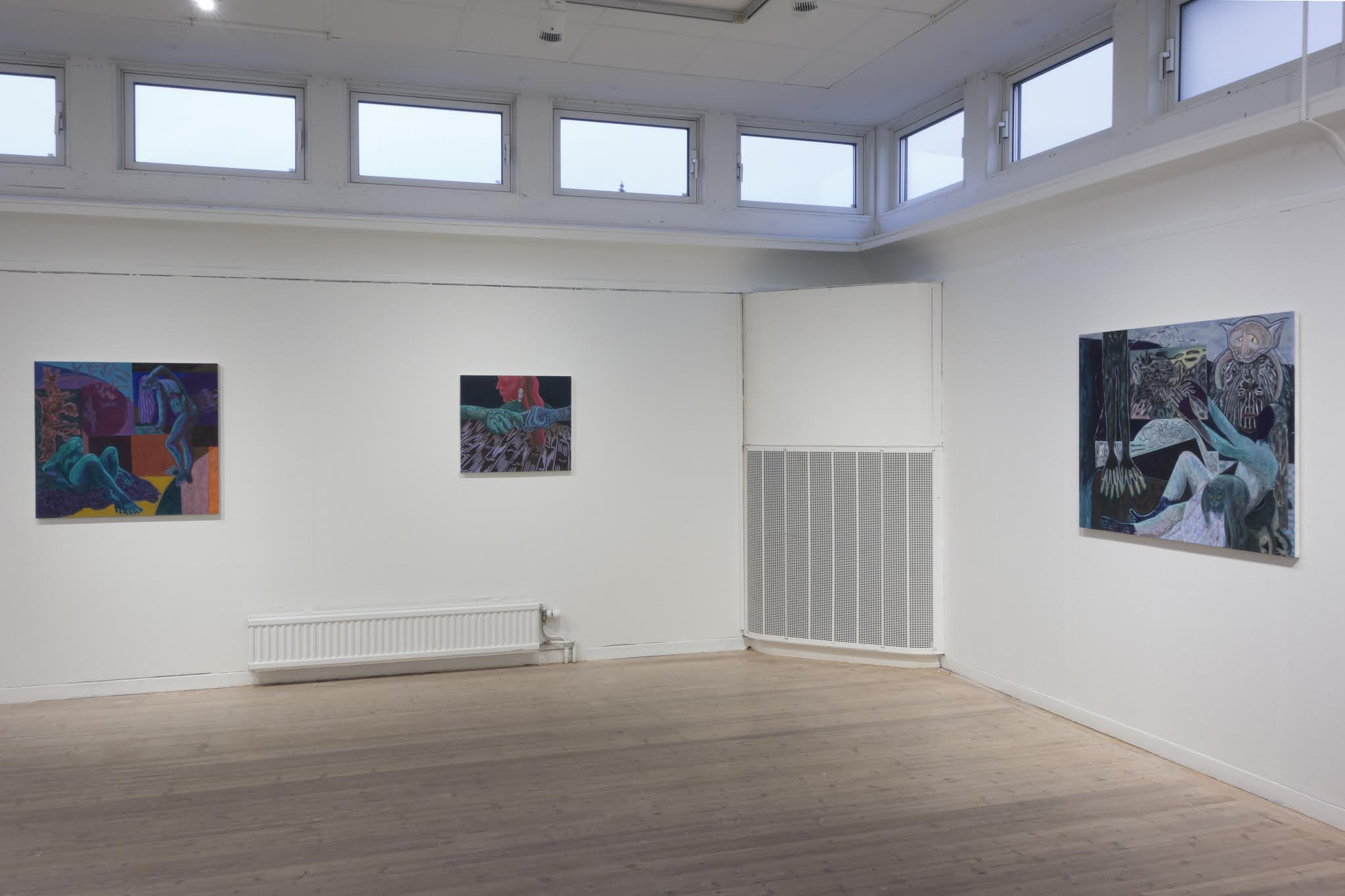 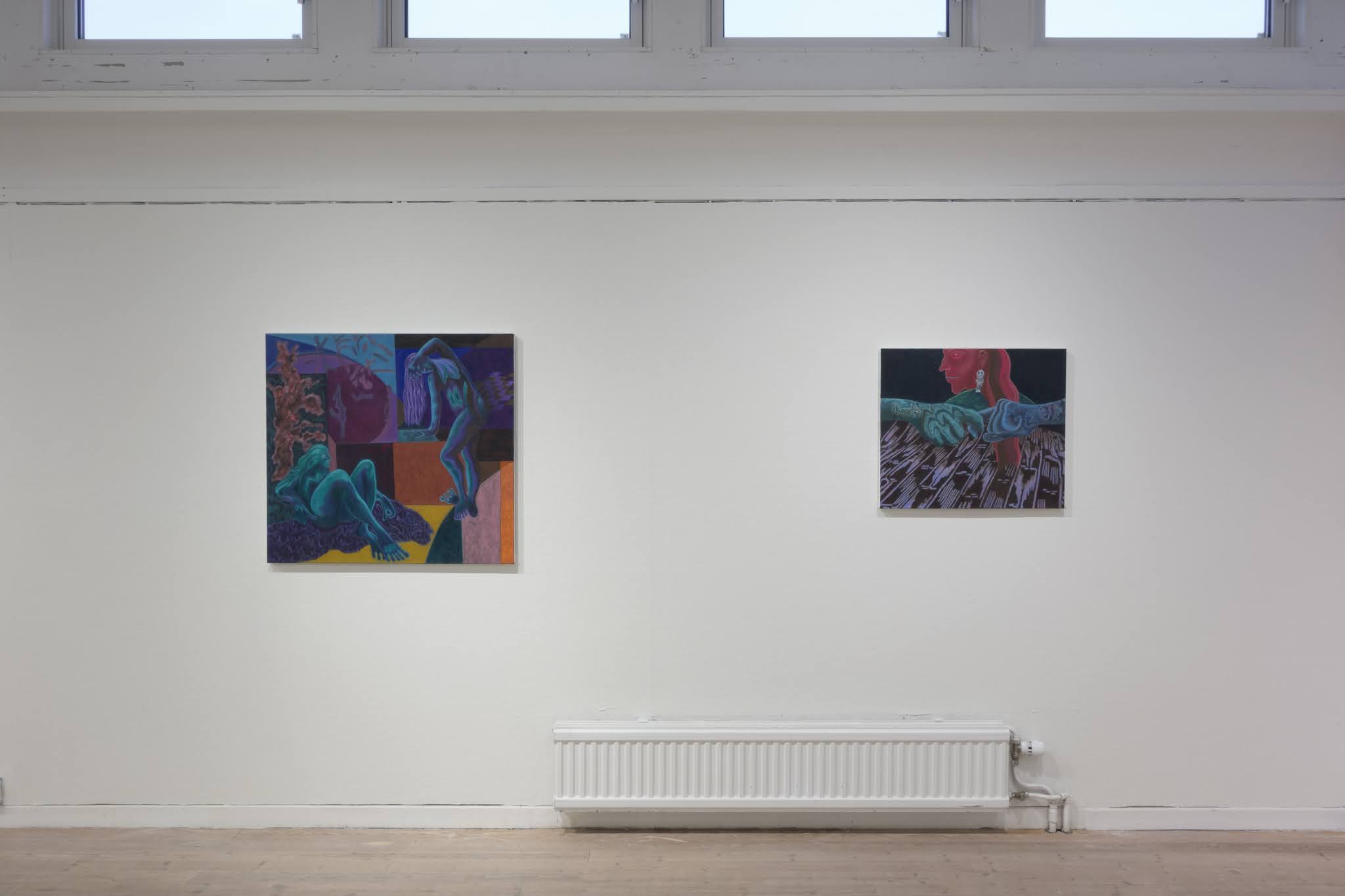 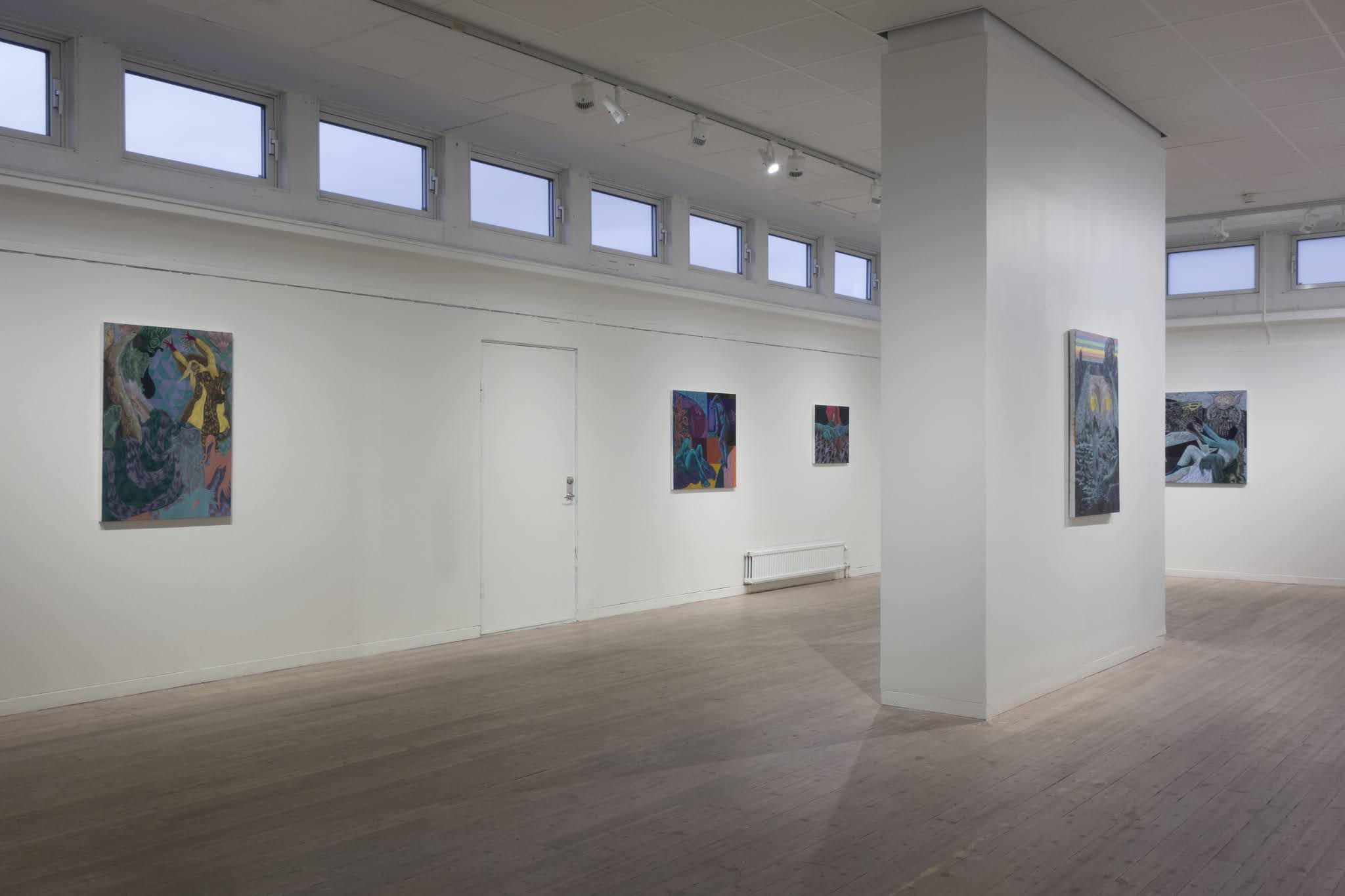 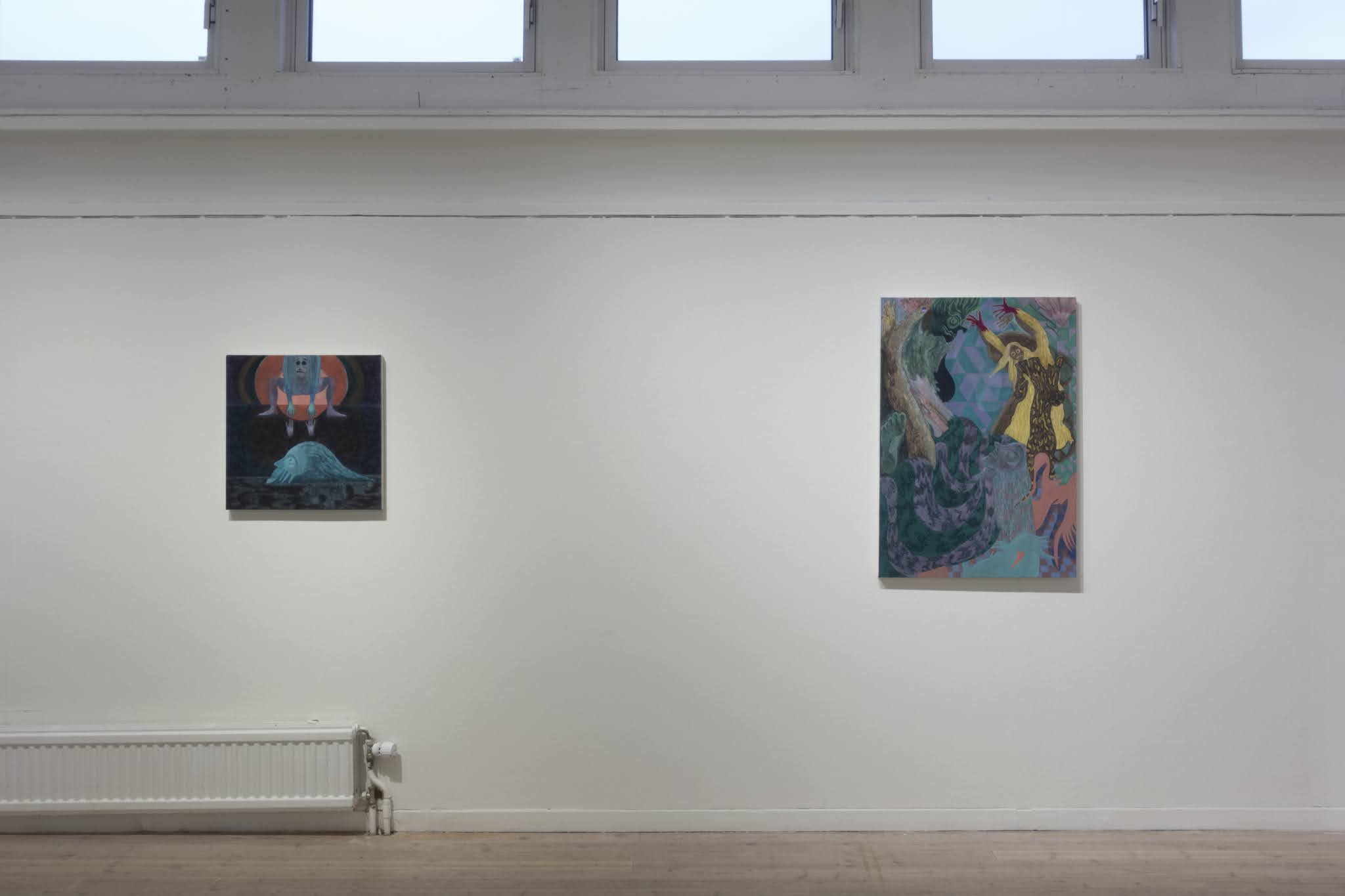 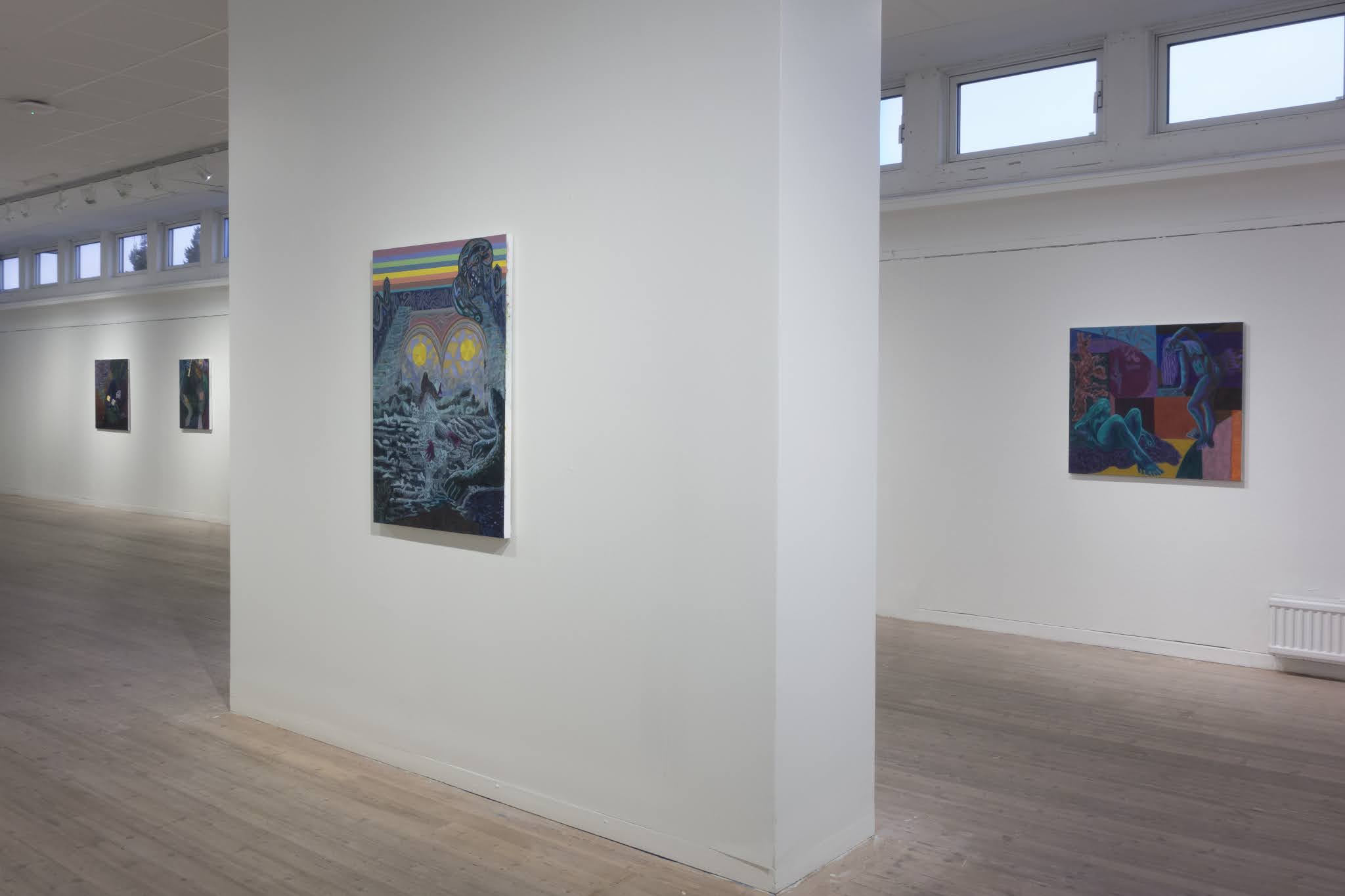 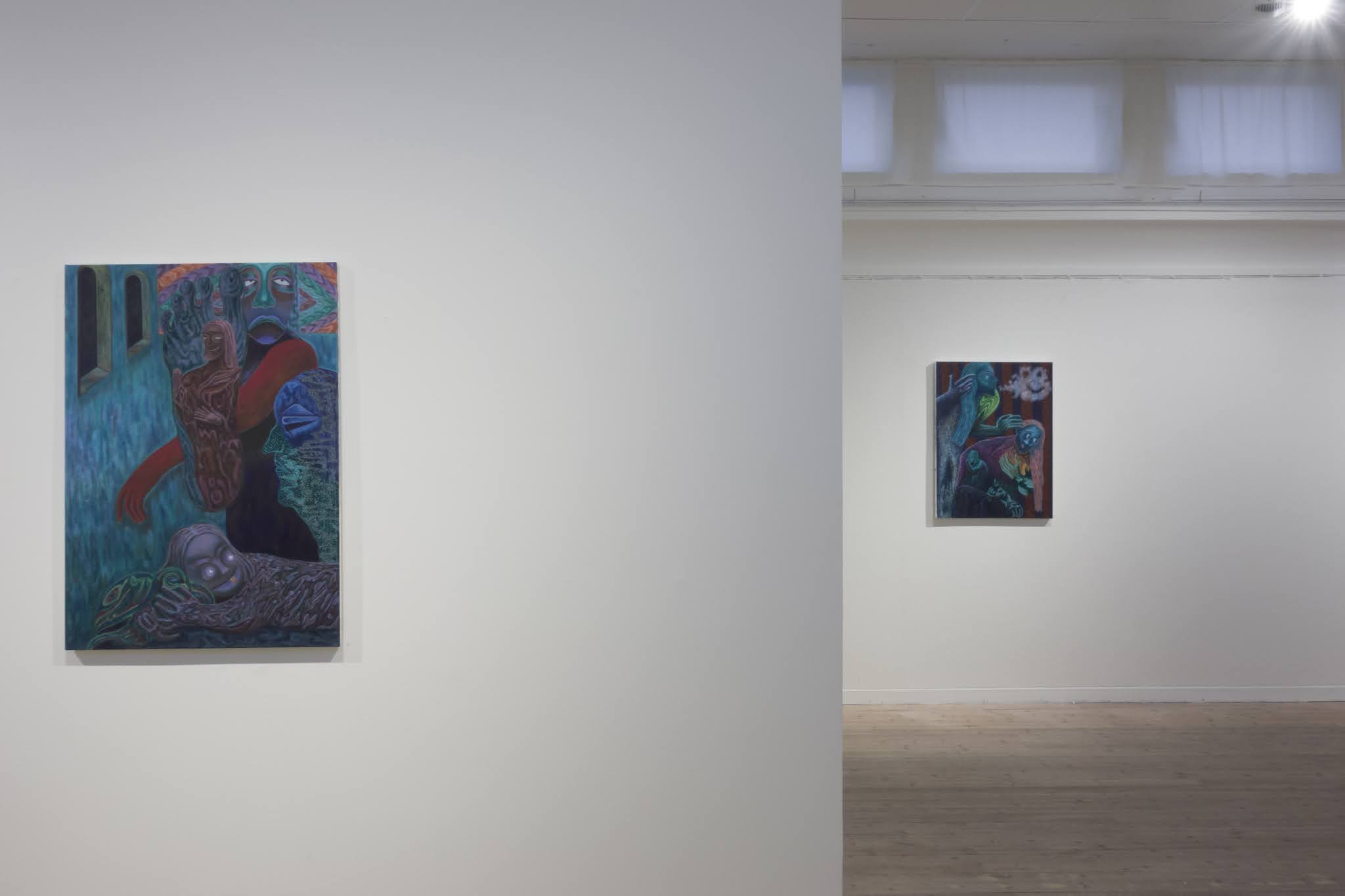 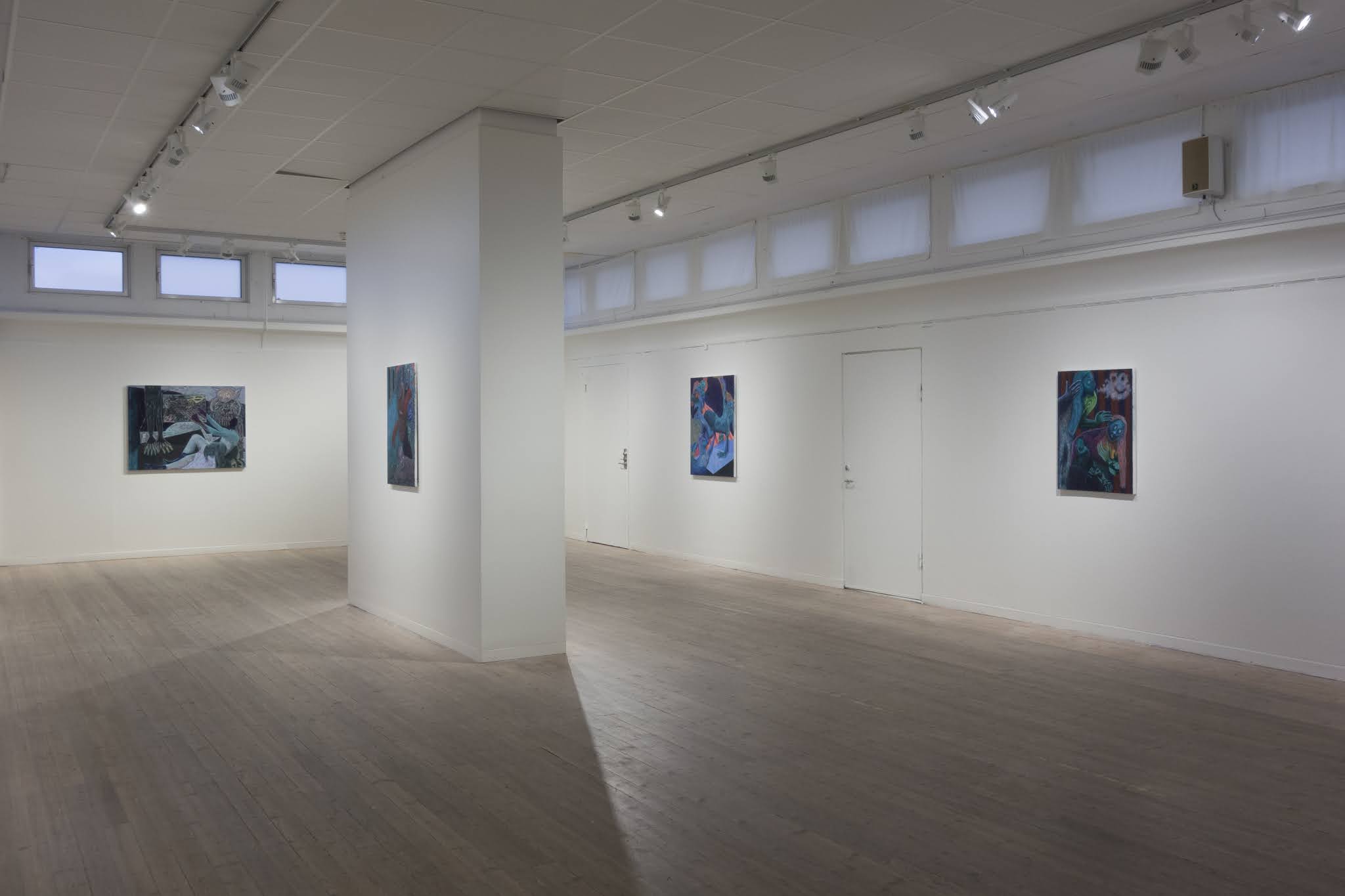 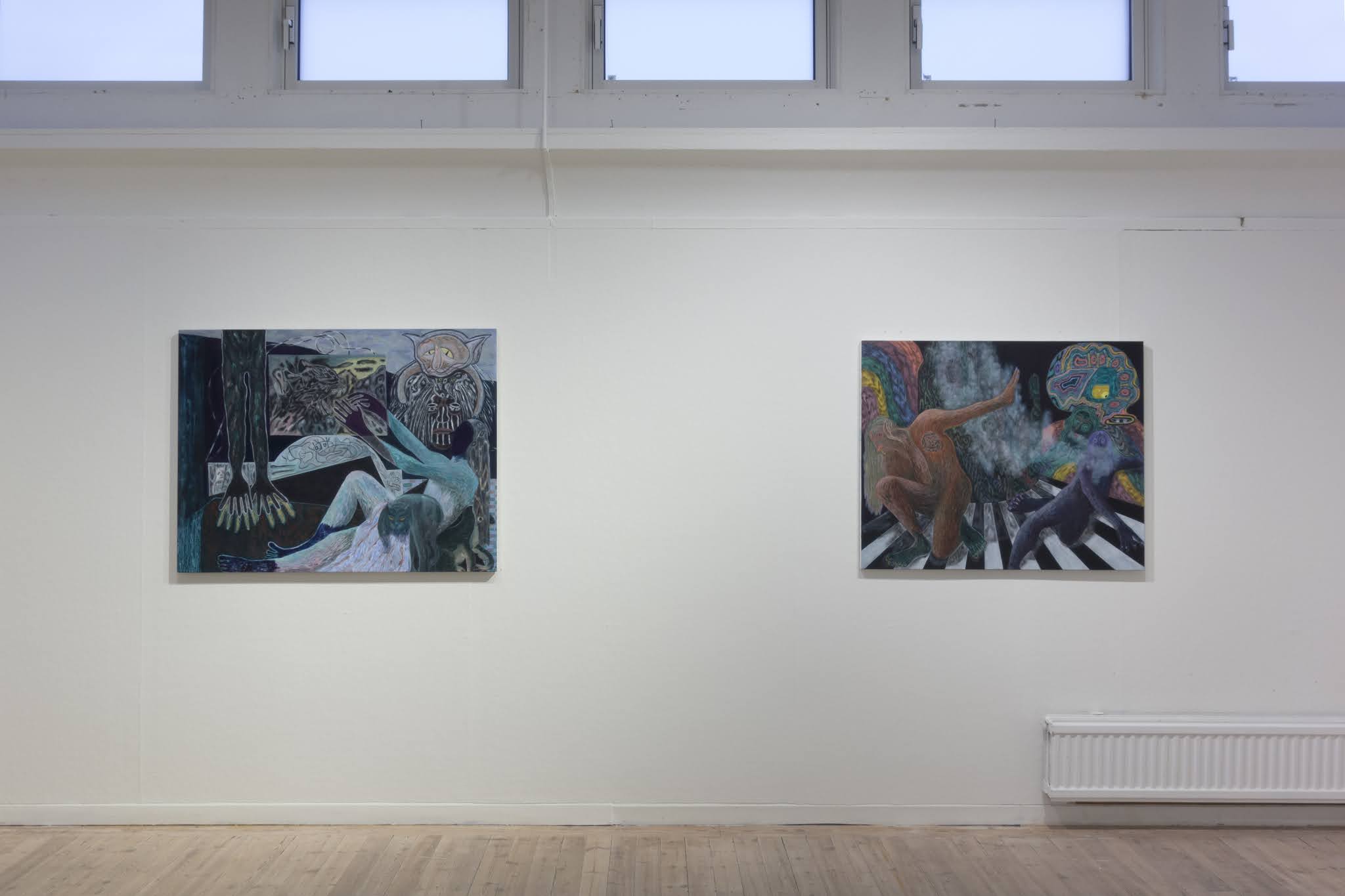 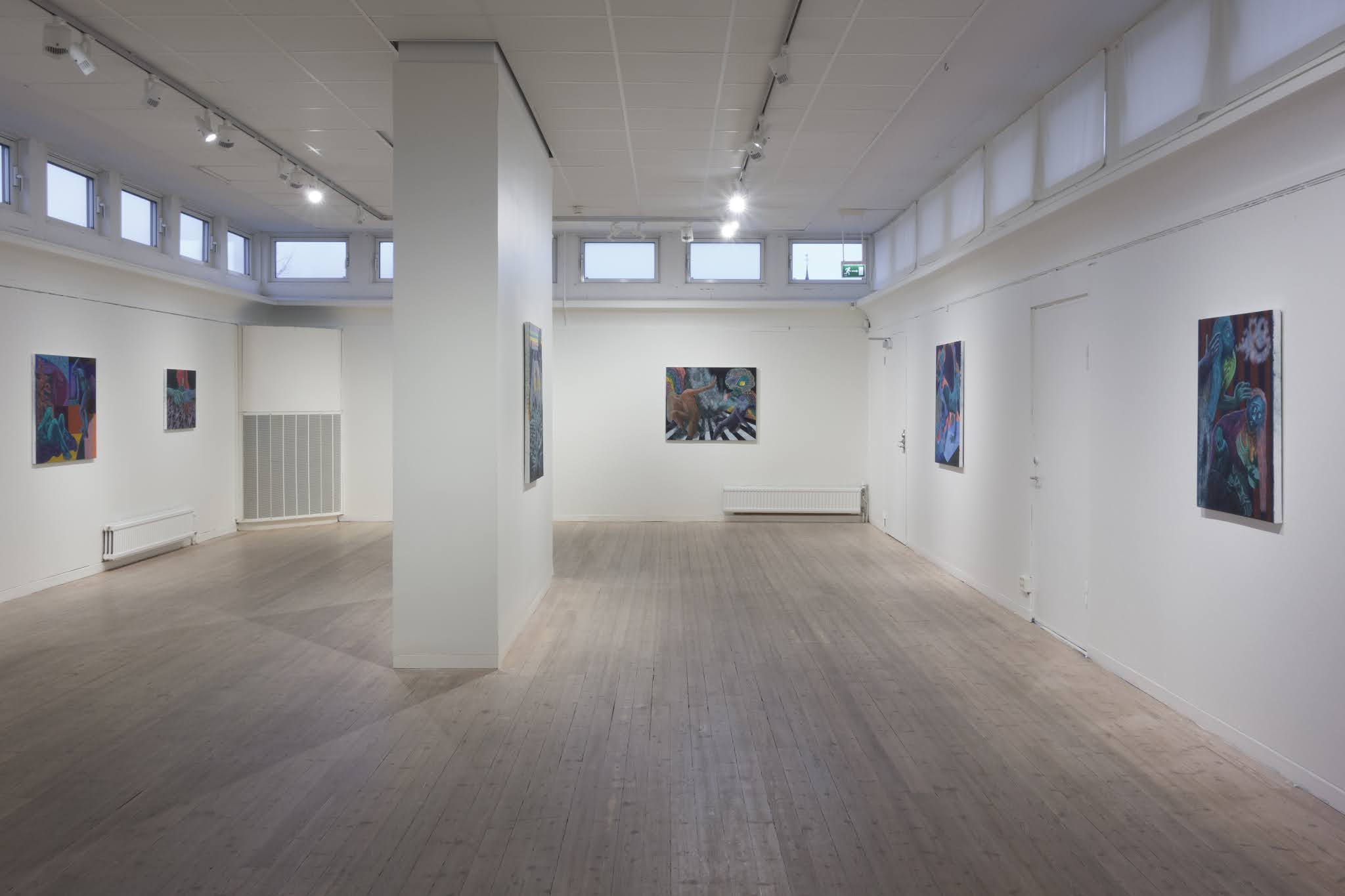 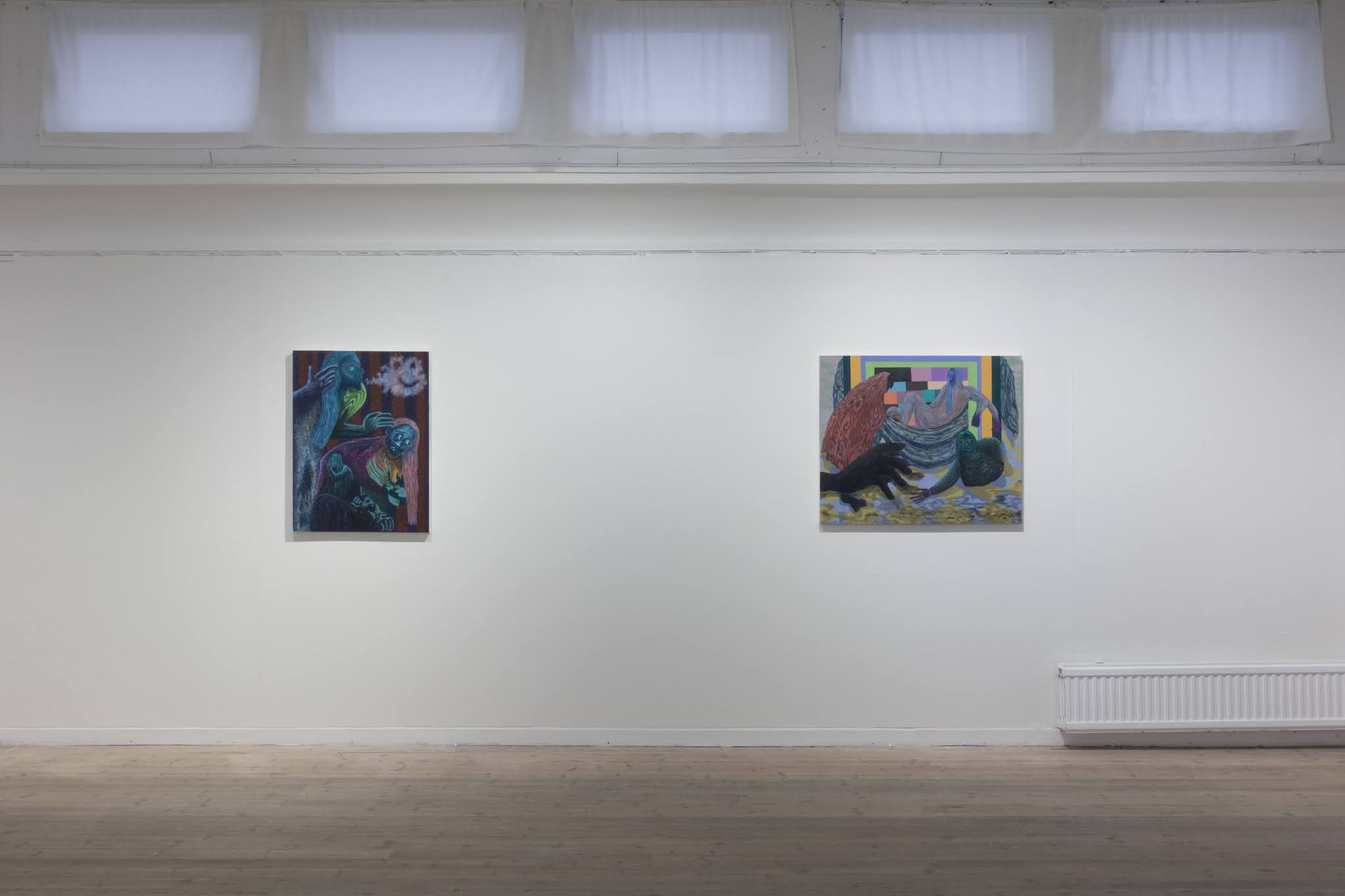 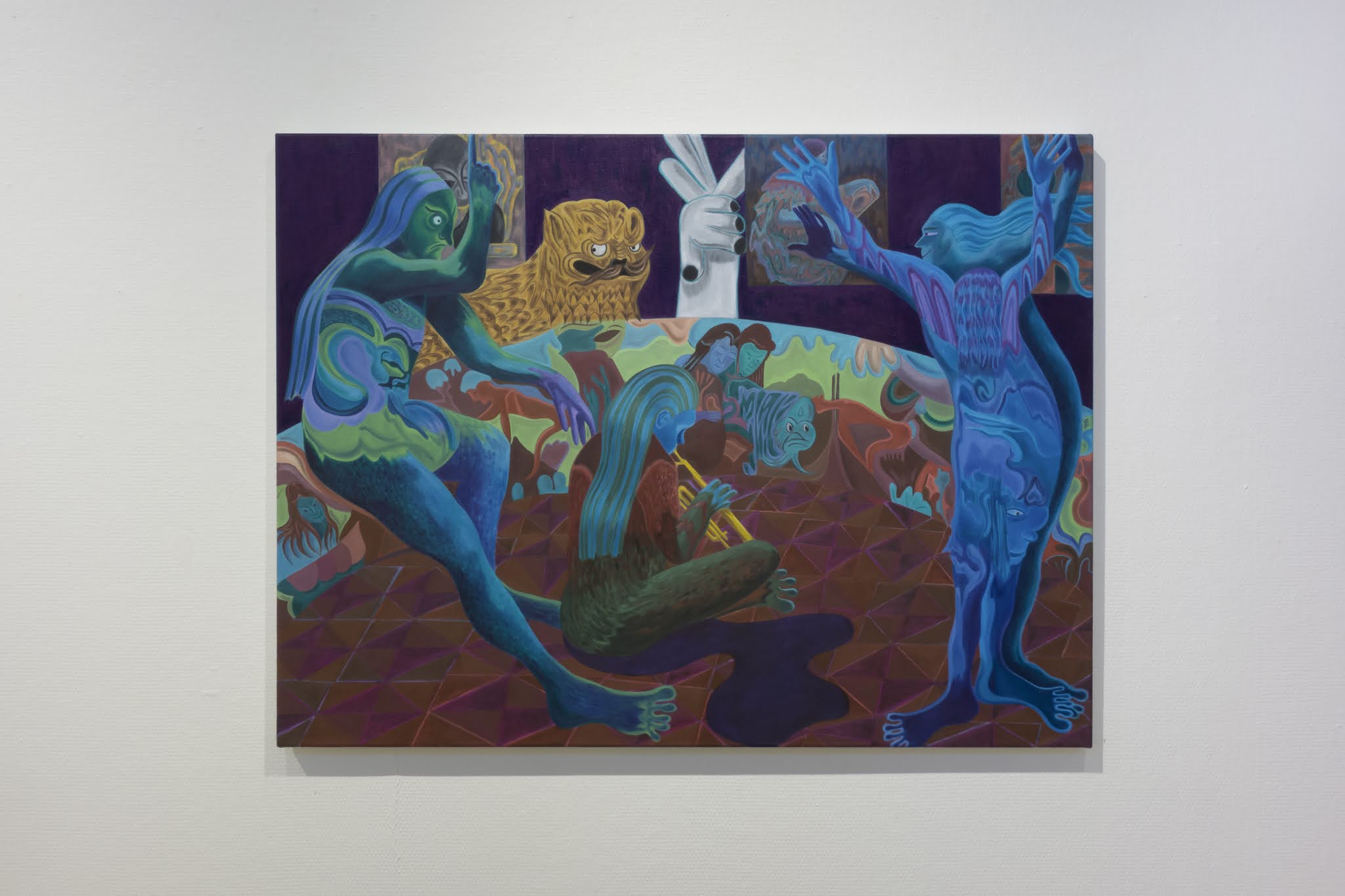 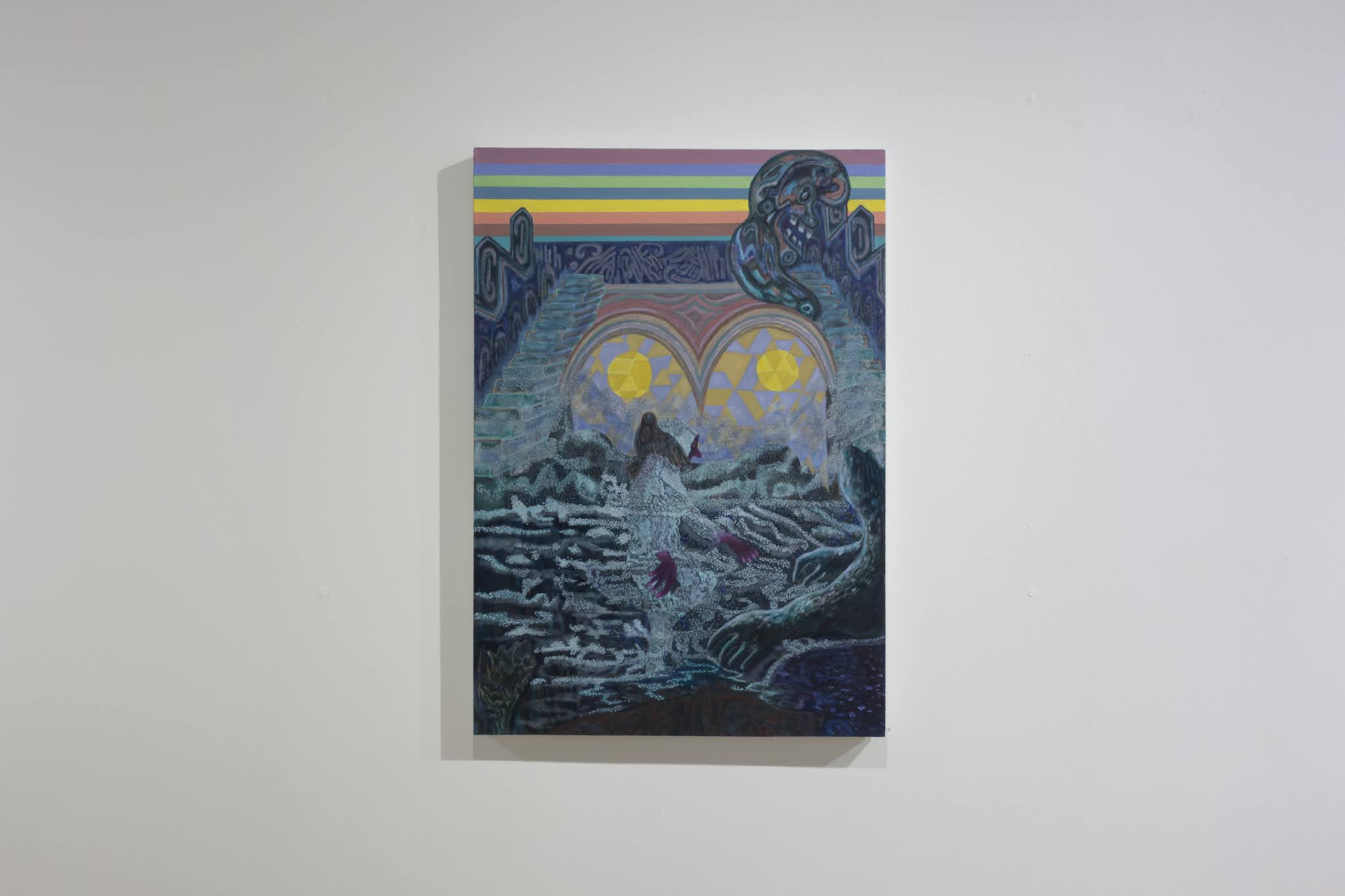 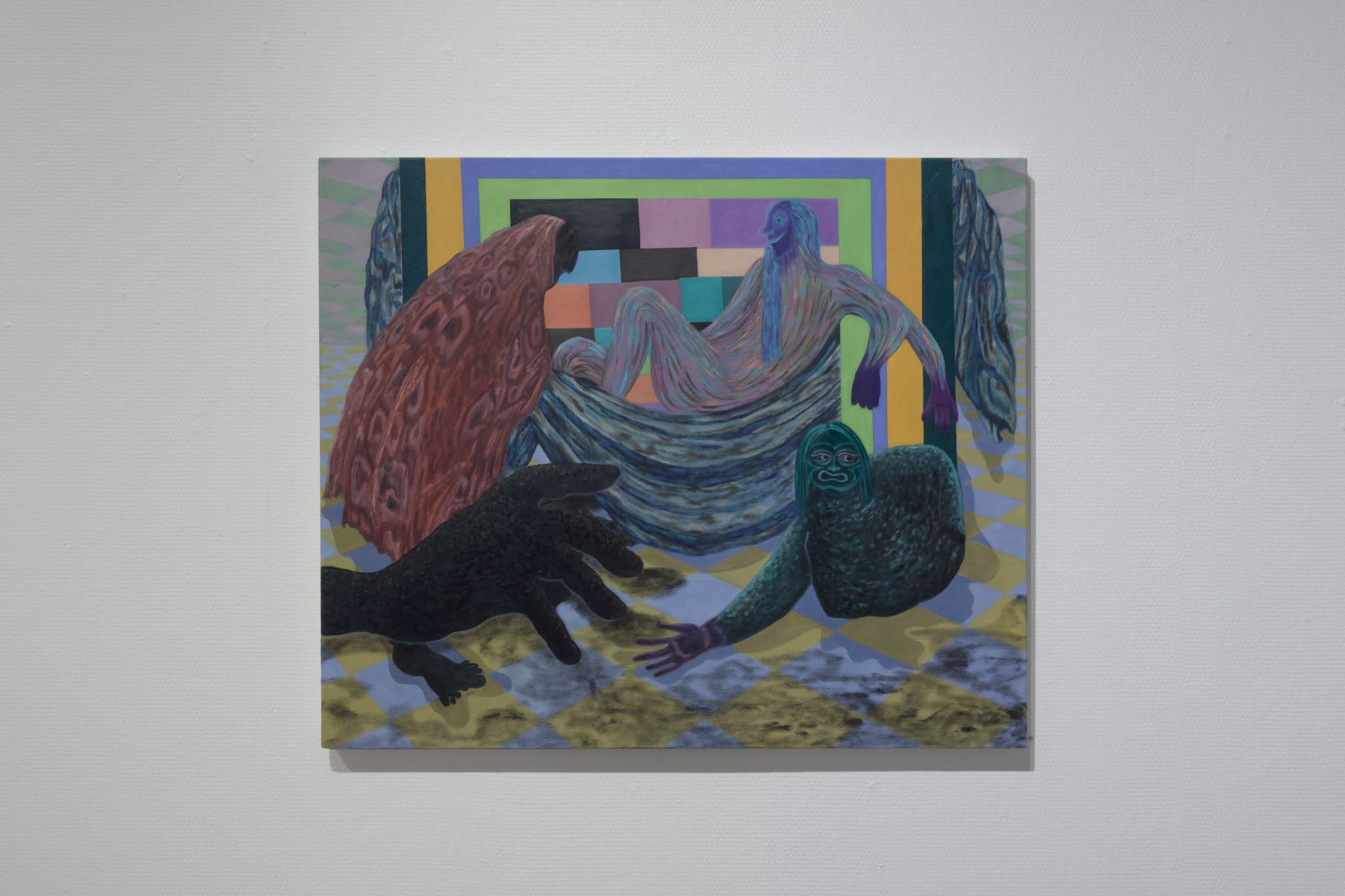 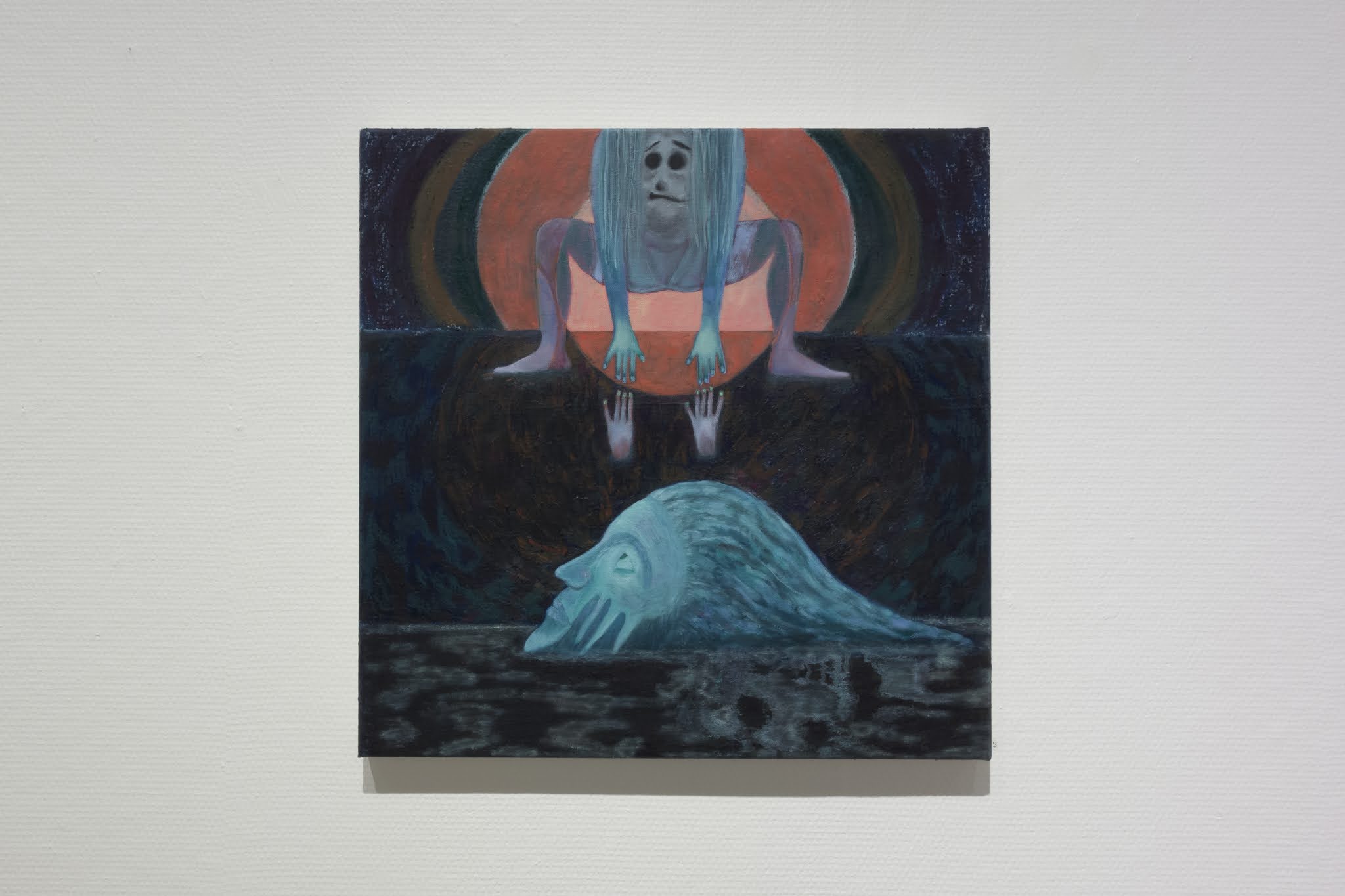 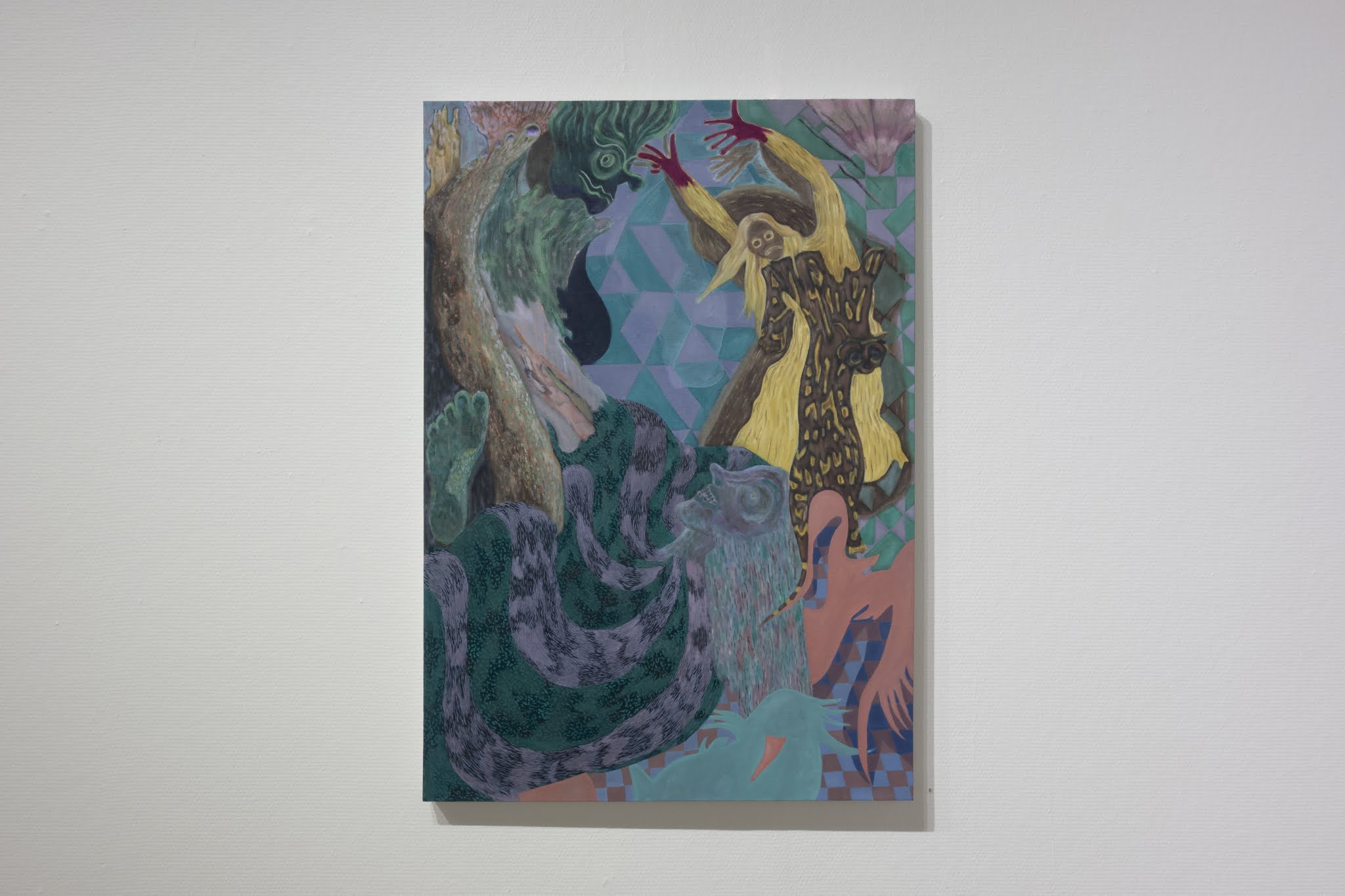 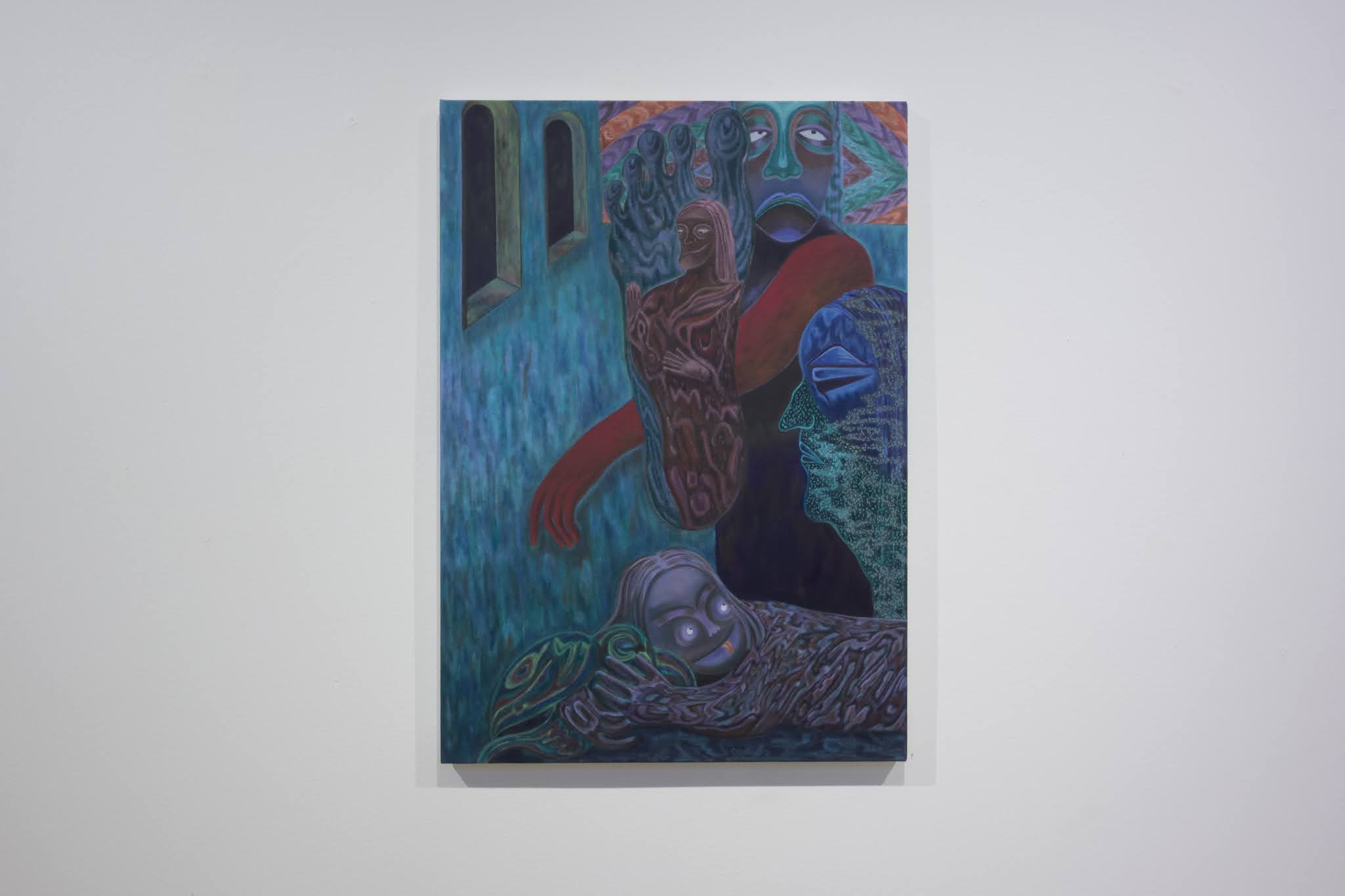 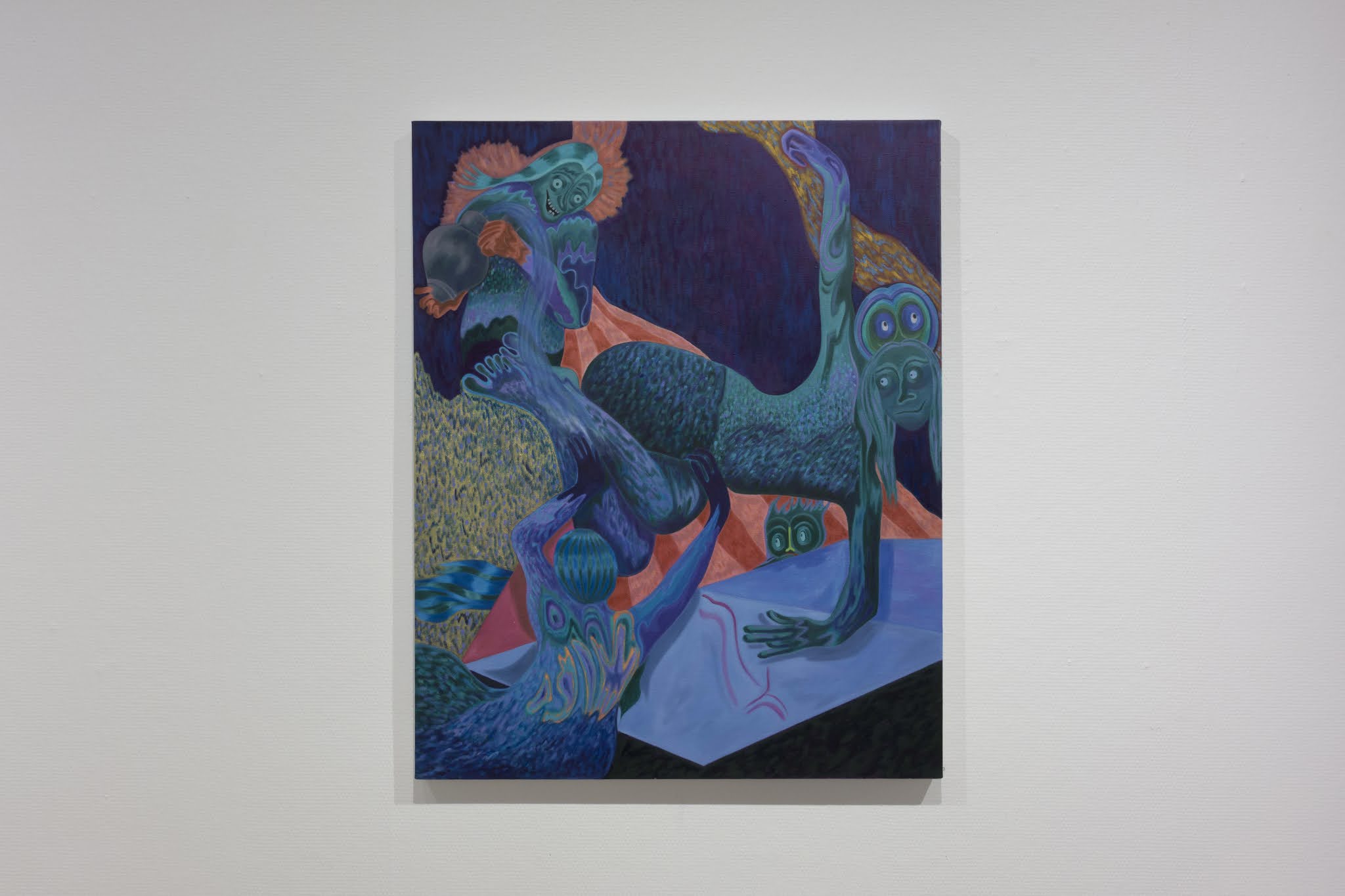 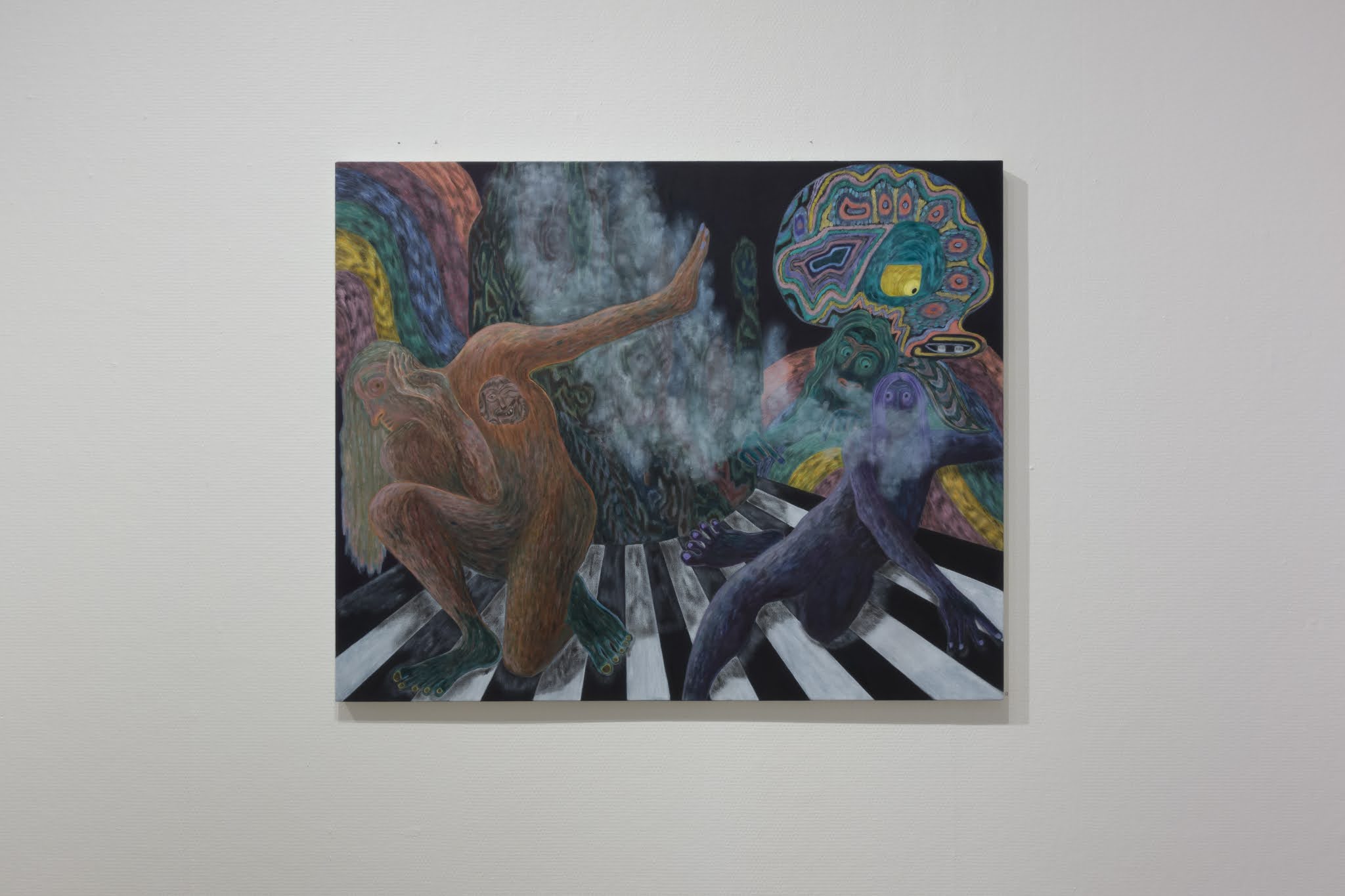 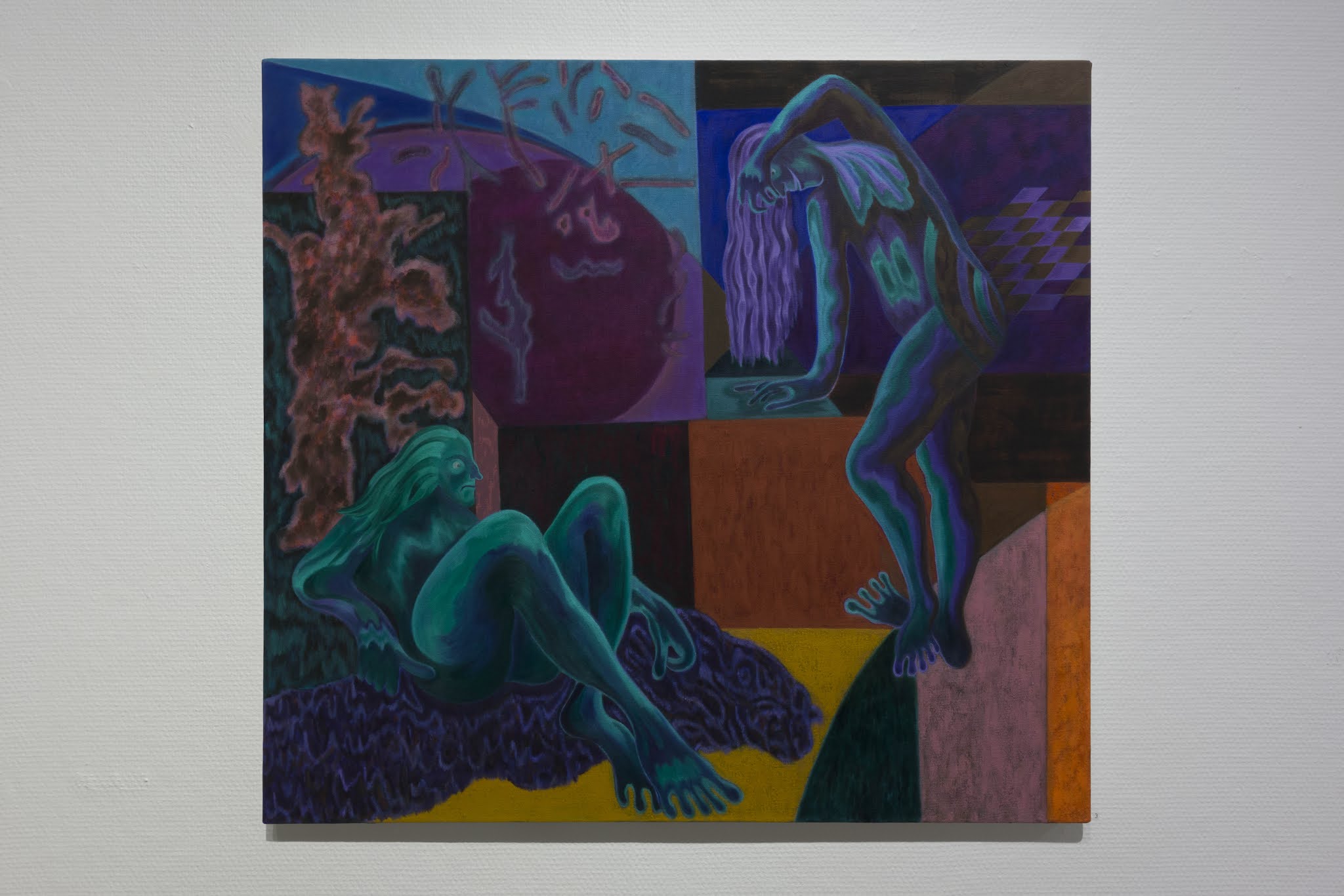 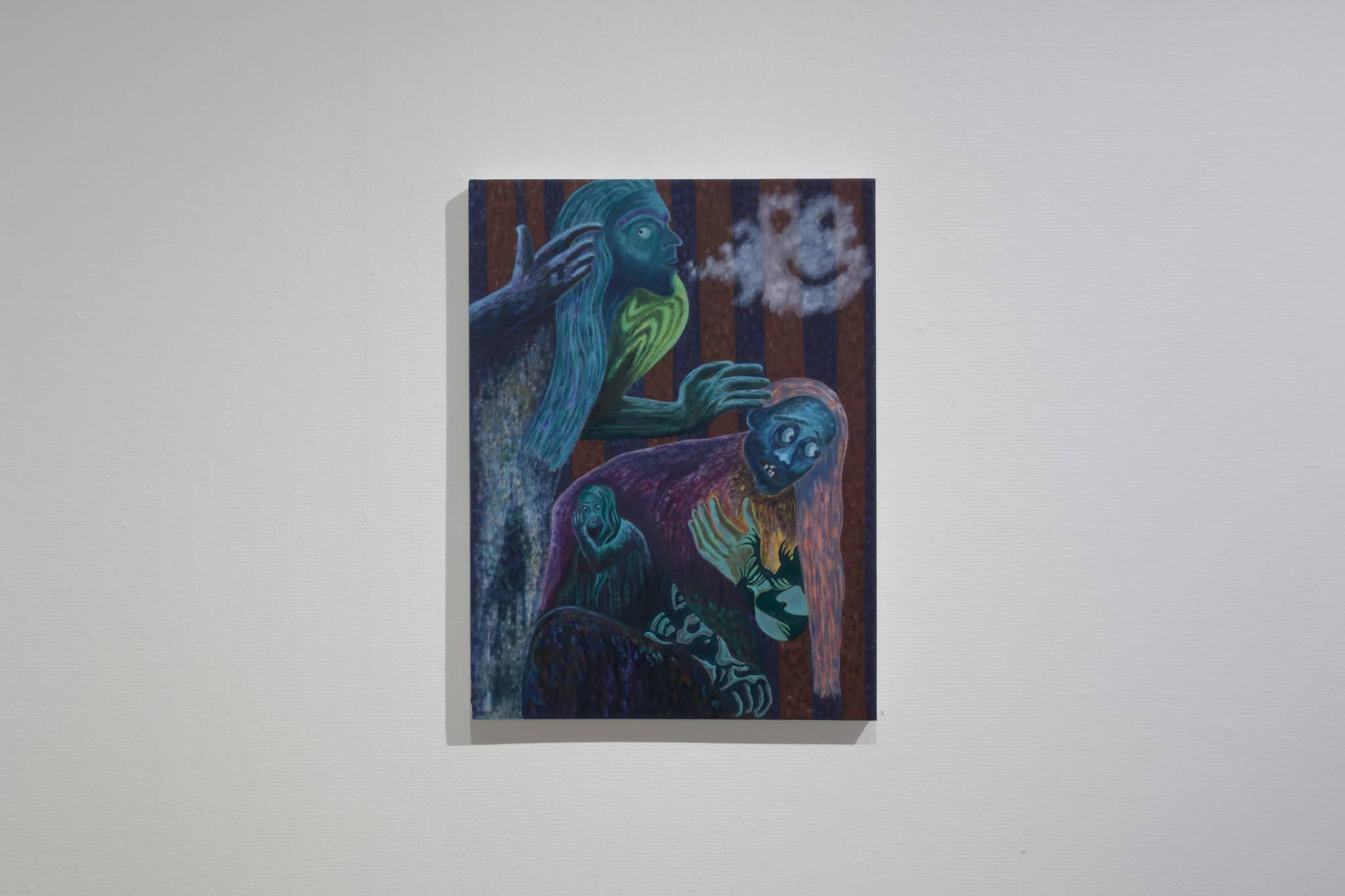 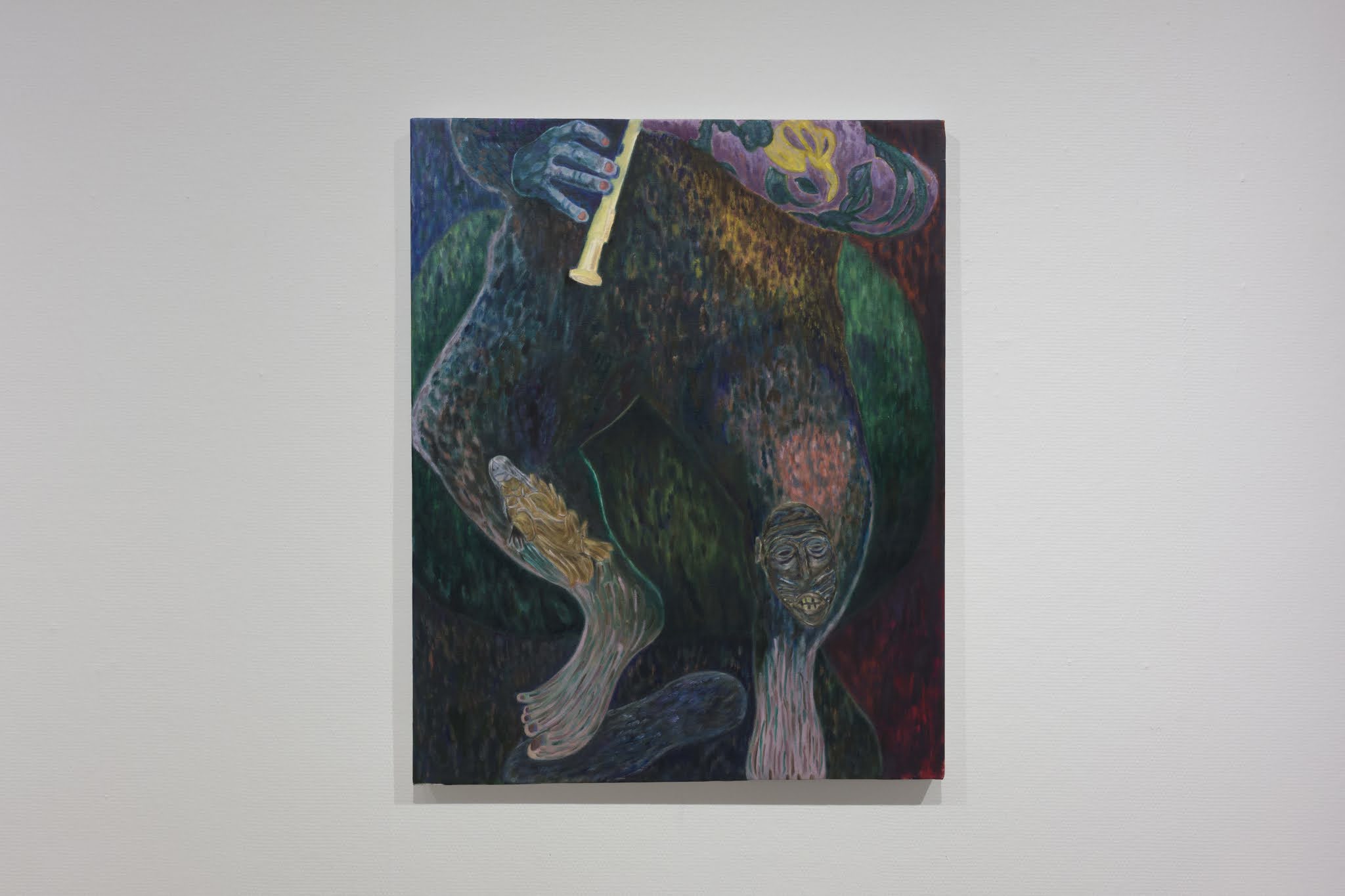 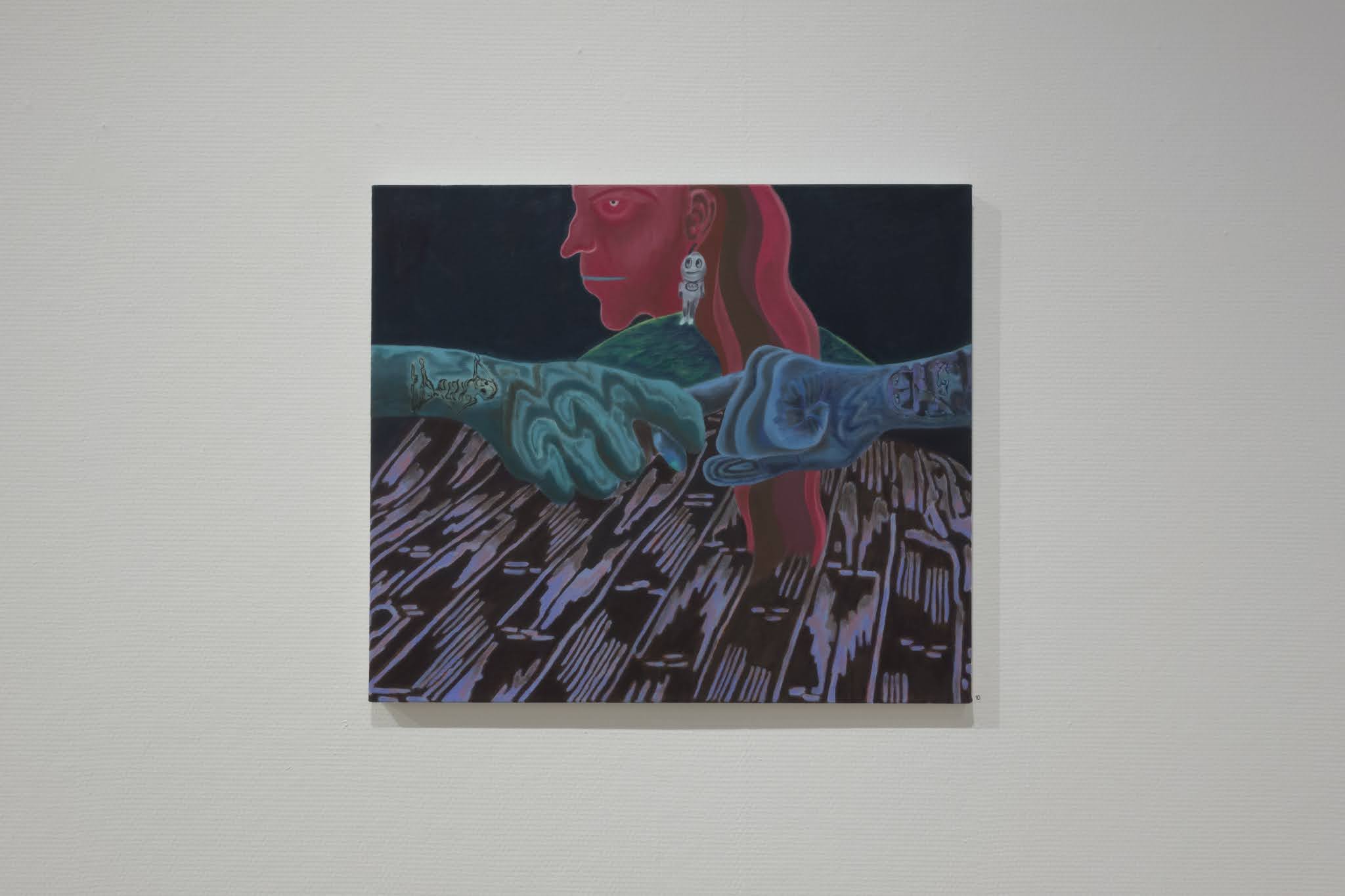 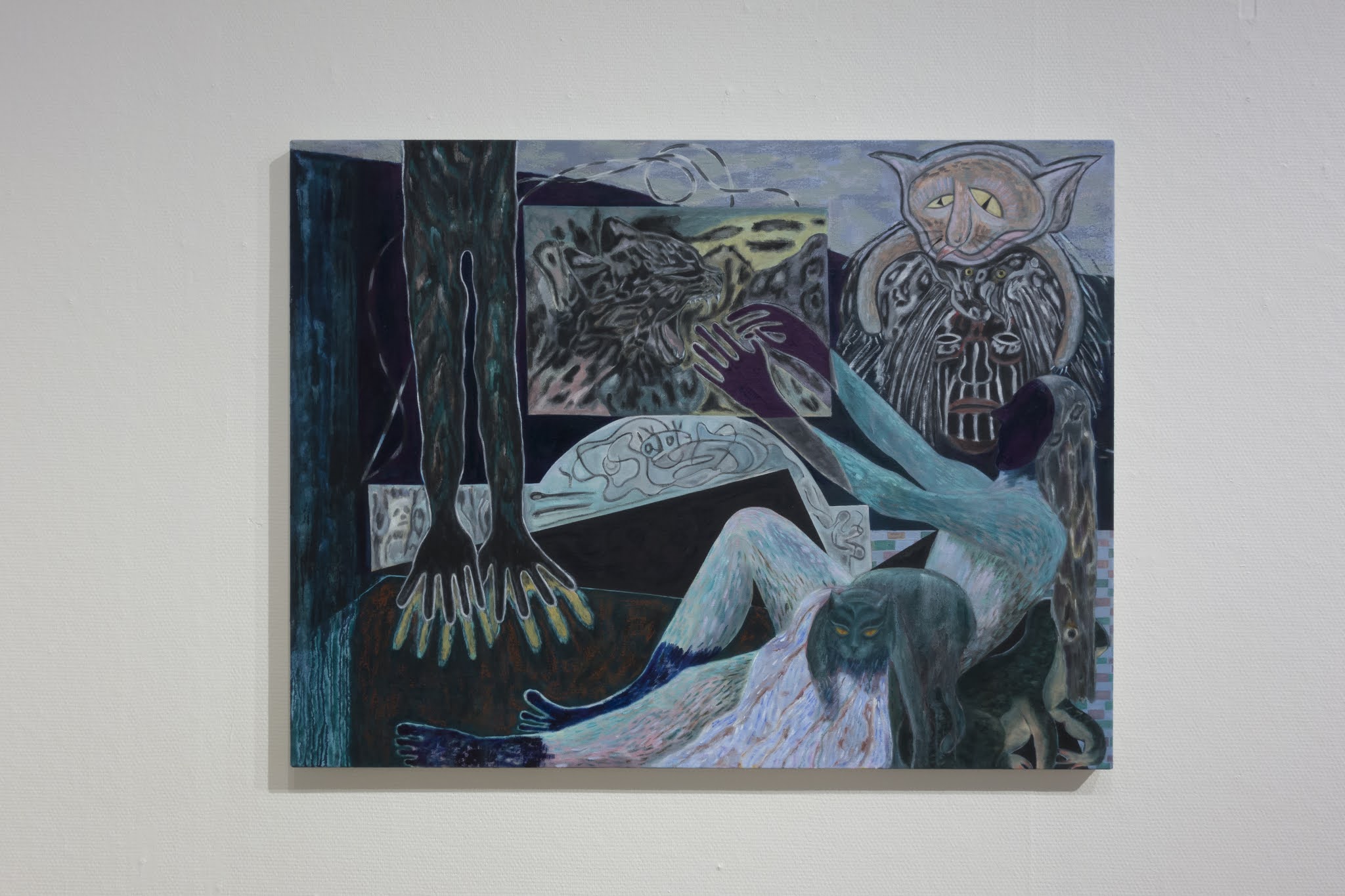 “You’re a bit younger and you read Deleuze. You think his theories about art seem really interesting and you want to become an artist. Then you realise that Deleuze isn’t into new and interesting art at all. He’s into Francis Bacon, and you think, “Why would he be into Francis Bacon? That’s super conservative!” The years pass and you’re not into Deleuze any more. Not at all. But you really like Francis Bacon. A lot. Is this because you’ve grown old and conservative? Of course not. It’s because art is always right, and writing about art isn’t.”

Texts about painting, like texts about art in general, would often begin with a quote. A quote is there to open up the text. It’s there to place it in relation both to the art it wishes to speak about - art that uses an entirely different language than text - and to other texts - which speak the same language but about other things. A quote frames the text from both sides, and builds a bridge between painted image and written language. It’s there to connect the text with all other texts and all other works of art, both contemporary, future, and historical. Or it’s just there to show off.

Text and painting share the same origin. First, symbols are carved into hard materials; afterwards they are applied with pigments on hard materials; and even later they are applied on soft and transportable materials. Then the printing press arrives, followed by the computer, and with it comes the possibility to reproduce symbols forever. The easier it is to distribute art and literature, the more art and literature is available. Not only for the audience, who observes and reads, but also for artists and writers, who borrow and sample and steal. More and more texts and art works are produced, and are more and more commonly available.

Only very rarely can you reduce art to its material. When an artist makes such a reading possible, art rarely benefits from it. Paintings are often filled with borrowed, copied, and stolen material, but this doesn’t mean you should reduce them to their sources. A stolen motif can be decoded if you know the specific source. But you could also consider the depth, colour choices, composition, how much vs how little the artist has tried to squeeze into the image, how the spaces in between work, how the painting relates to the wall and the room around it, to its present, to the hand who painted it, to the text written about it, to the eyes looking at it.

A friend of mine used to work as a guide for groups of children at an art museum. In order to get the kids interested, he would tell them how it’s more fun to imagine that an artwork has a meaning and try to figure it out, than to assume it doesn’t mean anything at all and ignore it. It’s a wise appeal to us all to not just look at art, but really observe and be influenced by it. But it’s not necessarily a particularly good method for looking at contemporary painting.

Painting could be said to come from the same primordial soup as writing, but its vocabulary is so different from the seemingly more analytic knowledge we generally associate with written language, and painting is always at the risk of getting short-circuited if the two start off at the wrong foot. It’s impossible to clearly define the meanings of paintings. Written language may be able to grasp some of their details, but can’t fix their meaning. It ponders on the surface, but can’t reach the depths. The solution of the bored kid is to give up and become even more bored. The solution of the interested kid is to try to come up with as many and as speculative meanings as possible for one single work. At that very moment, all those speculations thrown at the painting constitutes its meaning - until the group continues to the next work, and the meaning goes up in smoke.

Smoke is the opposite of painting. Painting is physical and solid, and a painting consists of relatively durable material. Smoke on the other hand is ephemeral. Smoke is a side effect of an extremely accelerated decomposition of physical materials. Smoking is an accelerated decomposition of the human body. To catch this erosion in painting is a laborious process indeed. Painting is slow and based on material that sticks and dries. Smoke is fleeting, material in dissolution. Painting slows material down, while smoke speeds them up. A motif, abstract or figurative, is seemingly frozen in a moment. Movements slowed down from real time to slow motion, finally coming to a complete halt on the canvas. Or at least slowed down enough for the disintegration to be imperceptible to the naked eye. With strict control of indoor climate, humidity, and exhibition lighting, and with an army of specialised conservators, the paintings of the old masters don’t seem to age. The yellowed painting hanging on the wall of a smoky bar for the last 20 years tells another story.

Painted smoke is a visual effect. Smoke is difficult to catch, and even more difficult to paint. Smoke depicted in a painting is almost the opposite of the painterly gesture, and is found not in abstract but figurative painting. The painterly gesture exists in a limbo somewhere between the visual trace of a body movement (the hand of the artist) and a reference to painting and its ancient history as an art form. (What does it mean to paint? To be a painter? Where is the limit of painting? How big a part of an artwork can consist of references, while still allowing it to be a work in its own right? How minimal can your work be and still exist within the tradition of painting?) Painted smoke exists somewhere at the other end. Based not on gestures and references, it is founded on hard work on the one side, and effect and manipulation on the other.

A grain of manipulation always exists in the figurative, whether it likes it or not. Western art history is strongly intertwined with the representation of power. History is filled with master pieces commissioned by corrupt popes, violent rulers, and greedy businessmen. Paintings intended as gifts (or bribes, as we would call them today) from the customer to his prince, hoping for favours in return. Centuries of commissioned portraits of the collected Ebenezer Scrooges of Europe, all of them trying to buy eternal life through art. Fantastic chapel ceilings commissioned with the intention to make the people sit quietly in the benches every Sunday.

A major portion of western art history has in common not just the depiction of powerful men (God being the most powerful of them all), but also depictions of situations beyond and people above the bent backs of the commoners. Surrounding landscapes and interiors are exaggerated, and so are the manners and looks of the people portrayed, further emphasising their fundamental distinction from the struggle of the everyday. Characters and poses are overemphasised to make their meanings even more obvious to the observers. Stylised tableaus and body languages reserved for priests, popes, and kings. Signs of the absolute power and its altogether staged spectacle, painted in contrast to the miserable lives and hard working bodies of the common people. No one should doubt who is in power. Everyone looks at the painting. The painted prince looks straight into they eyes of the observer, and all the other characters in the painting are looking at the prince.

Christian paintings often use exaggerated gestures as a way to refer to the afterlife. Gestures far away from the manners of the every day, and facial expressions filled with so much submission, or distorted by so much grief and pain, that the source can’t possibly be of this world. And it isn’t. Islam is famous for its prohibition of images. A painting of Muhammad can never be grand enough to give its motif justice, and is therefore haram. What is larger than life itself can’t be represented and pride is a sin for artists too, so depictions are banned. Within the Christian tradition, the same problem has been dealt with in a different way - through symbols, exaggerated gestures and poses referring to something beyond both the image and the world. References to what can’t be represented. To something greater than our carnal bodies, which can only be referred to through signs and gestures.

But then something happens during the Renaissance. The gold standard of depiction is abandoned. The meanings of gestures, symbols, and poses are suddenly more fluid and diffuse. Hints sneak into paintings, sometimes as a critique of the portrayed monarch, and sometimes as witty in-jokes on the painter himself. All of a sudden, the excessive gestures can be read not as signs of absolute power, but as a critique of it - objections to power being too excessive, unreasonable and decadent.

In modern times, these gestures have been largely taken over by city life. In the modern city, the inhabitants stage themselves with a more sophisticated body language than that found in the provinces. In the tolerant city you feel more allowed to express yourself, unchained from the oppressive and strict social rules of both countryside and history. In the city you can live out with grand gestures, unconventional outfits, bizarre headwear and high ceilings. But we also need to remember the inhospitable conditions for eccentrics in northern Europe. Not even in the cities can they find the soil to sprout and grow to the full. And with the scant imagery of the protestant church, the few local eccentrics are often forced to look south for their inspiration.

I used to think that people who spend too much time on their looks can’t have too much interesting to say. The more time you spend on your clothes, elaborate body language, facial expressions and haircut, the less time you have to focus on more important things. You’d simply be too busy with your appearance, manners and behaviour. But maybe I got it all wrong. Just like a too literal analytical reading of paintings always gets it wrong. Because style speaks its own language, with body language and facial expressions developed into theatre and spectacle, comedies with full scenography and costume. The gesture must be read on its own terms, not limited by the analytical abilities of written language.

The distance produced by an exaggerated body language can also function as protection against the environment, a way to relate to the difference between yourself and the world. It seems absurd and pathetic when the teenager says “Talk to my hand“, but this is also the point. A distance can be created by the pathetic and manneristic, making it easier to live with the surrounding norms. Or at least live next to them. Outcasts know they are being laughed at for their weird styles, languages, behaviours and ways of living. But the laughter can also produce a safer distance, with the outsider being left alone. Sometimes this separation can give shape to other languages, lifestyles and behavioural patterns outside the prevailing norms.

But both the gesture and the spoken word disappear immediately. They are fleeting, go up in smoke. Both writing and painting are persistently fighting against this disappearance.