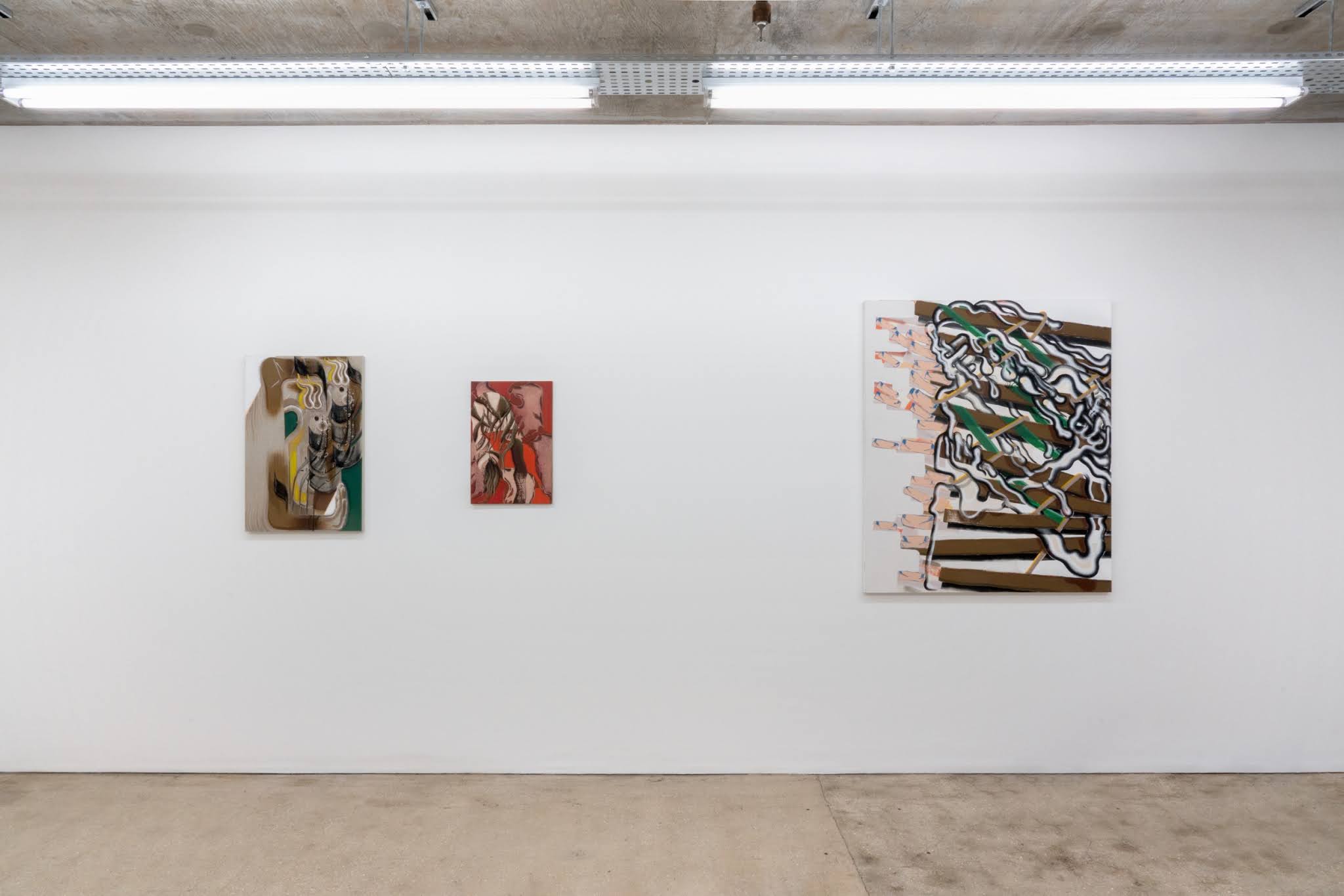 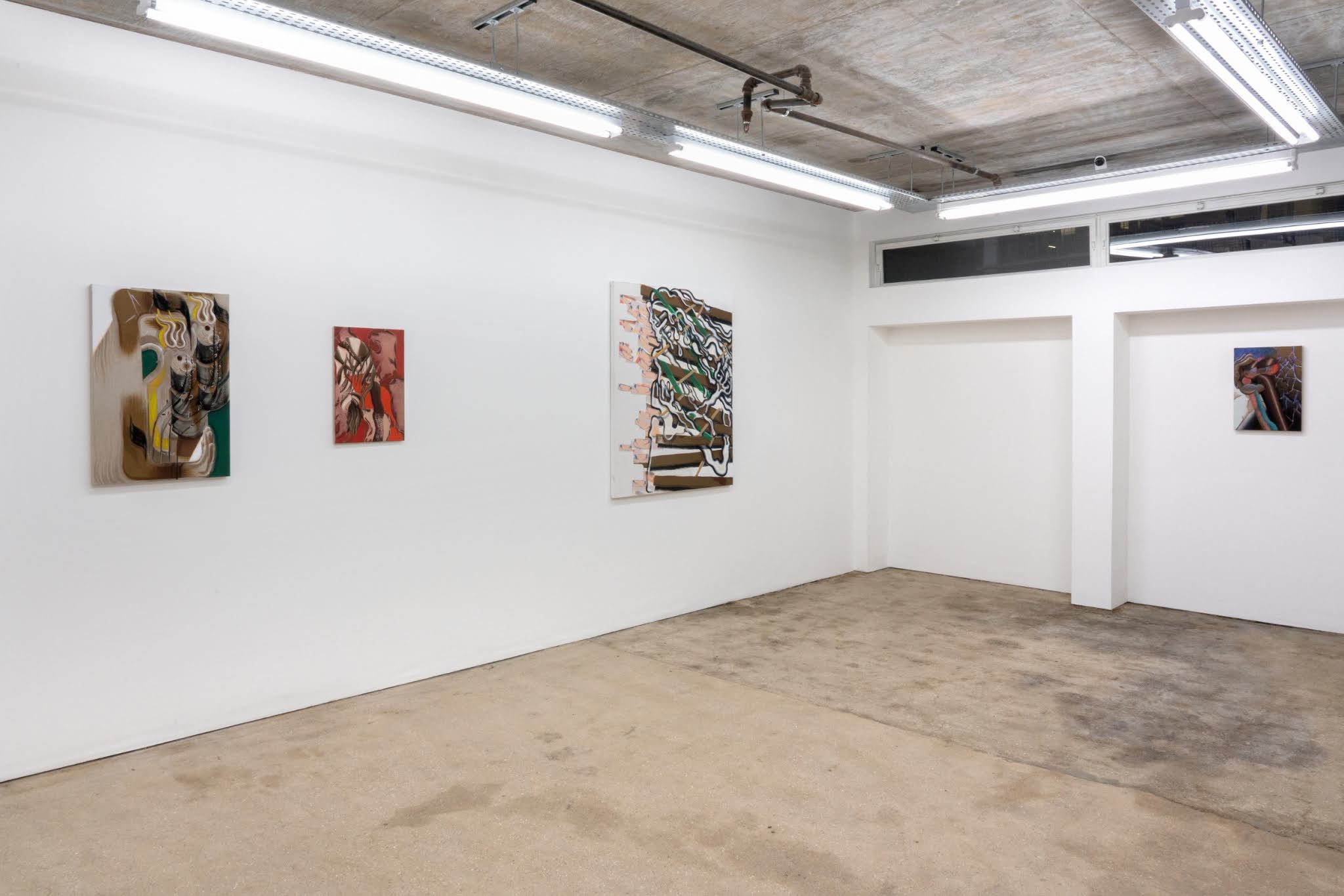 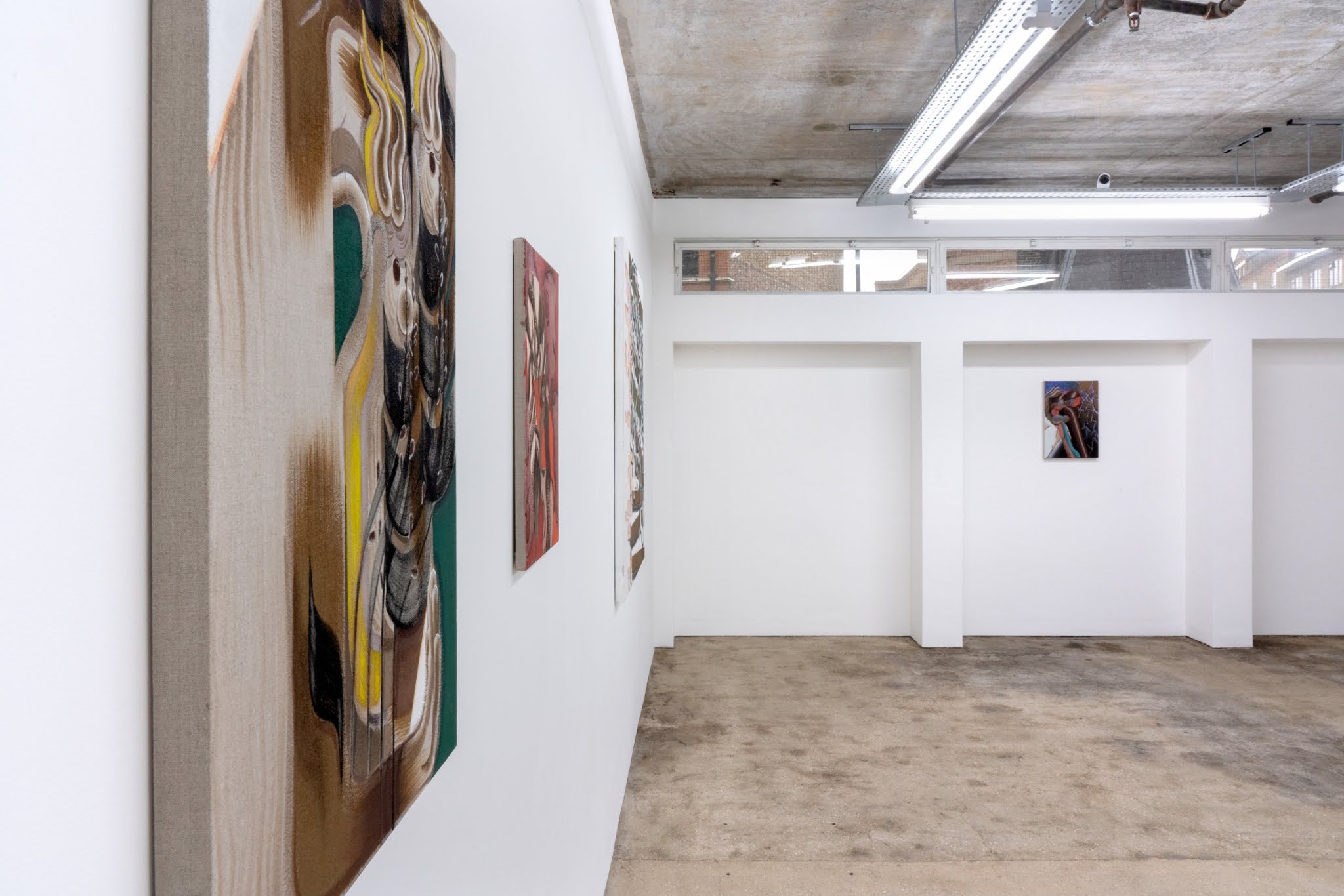 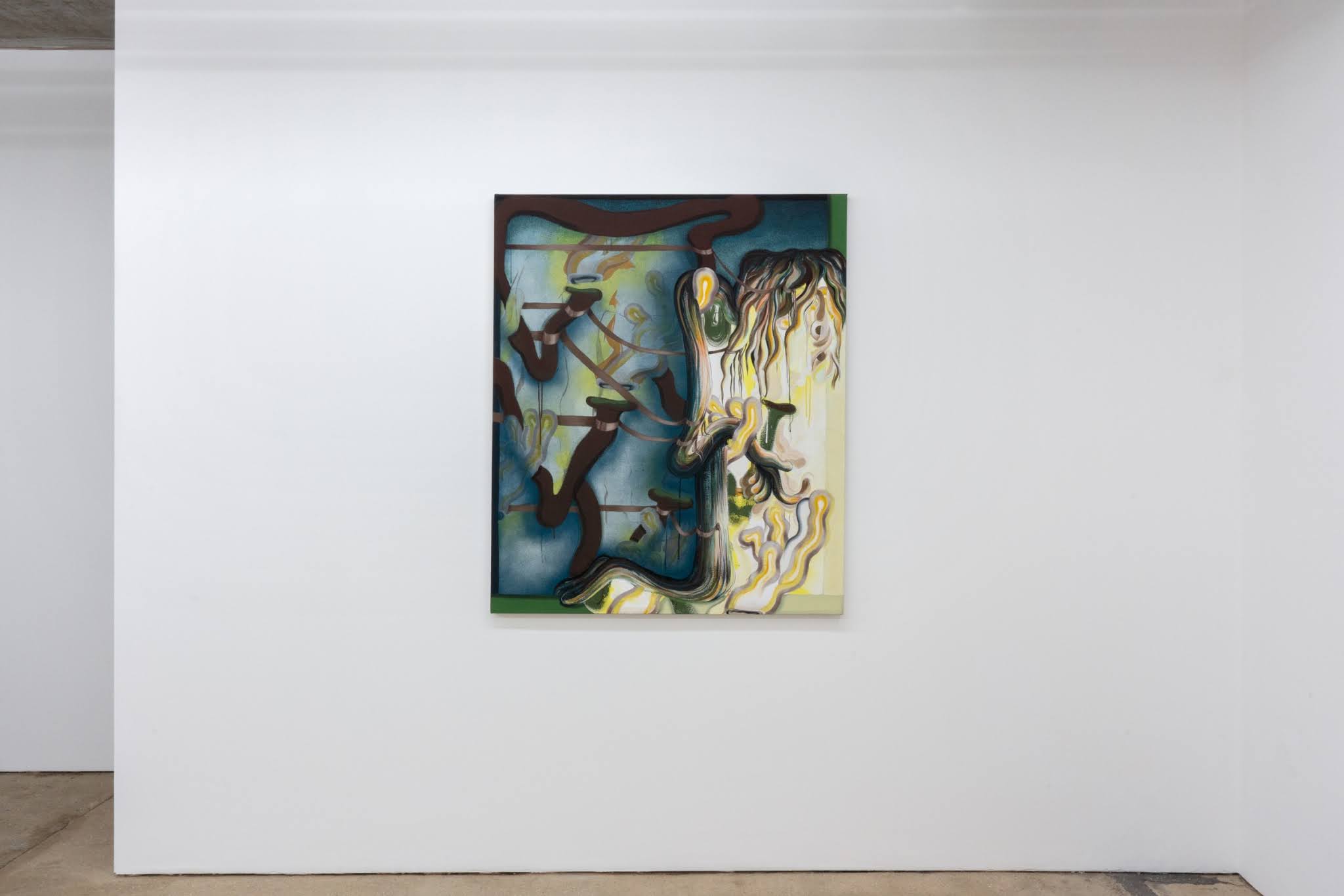 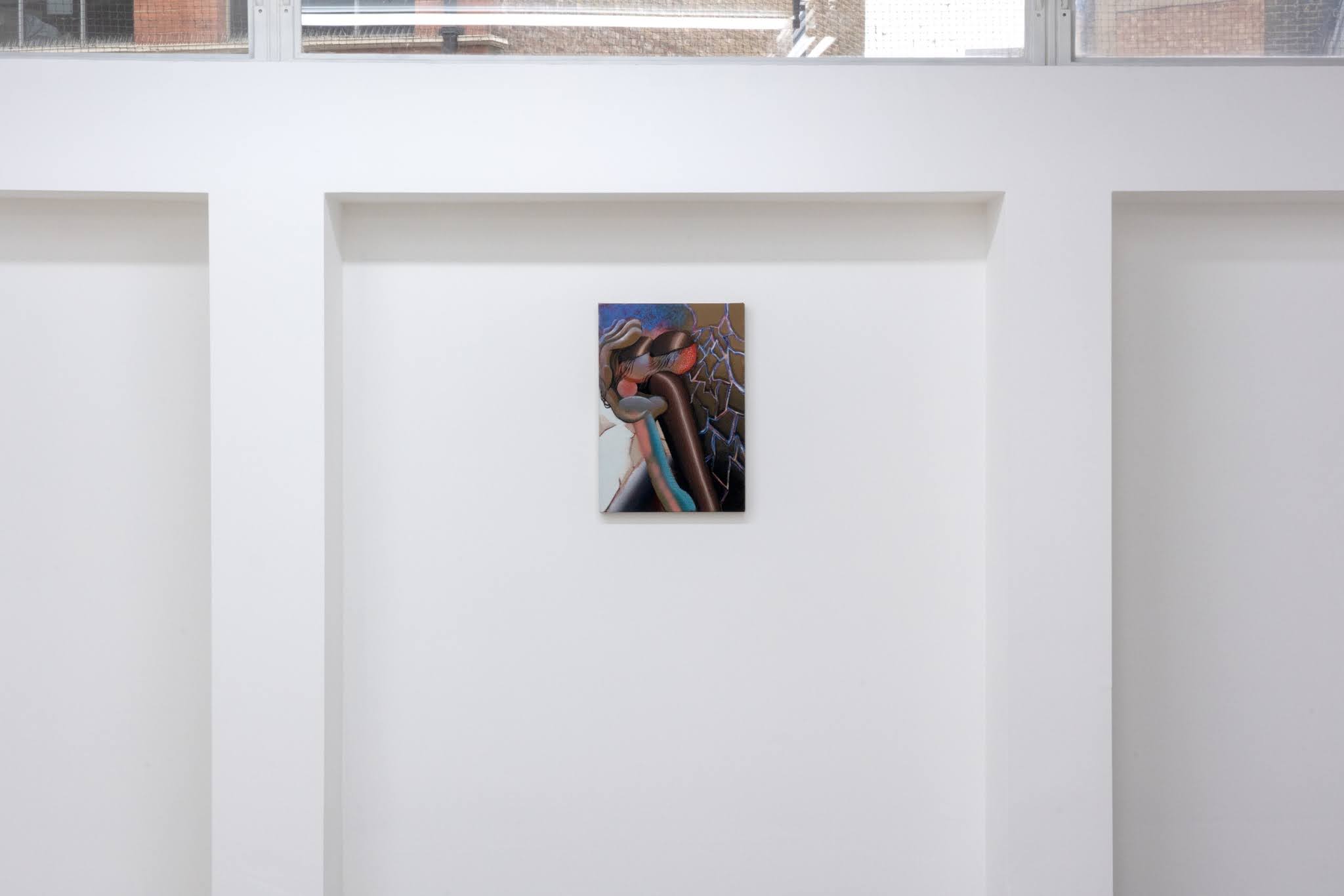 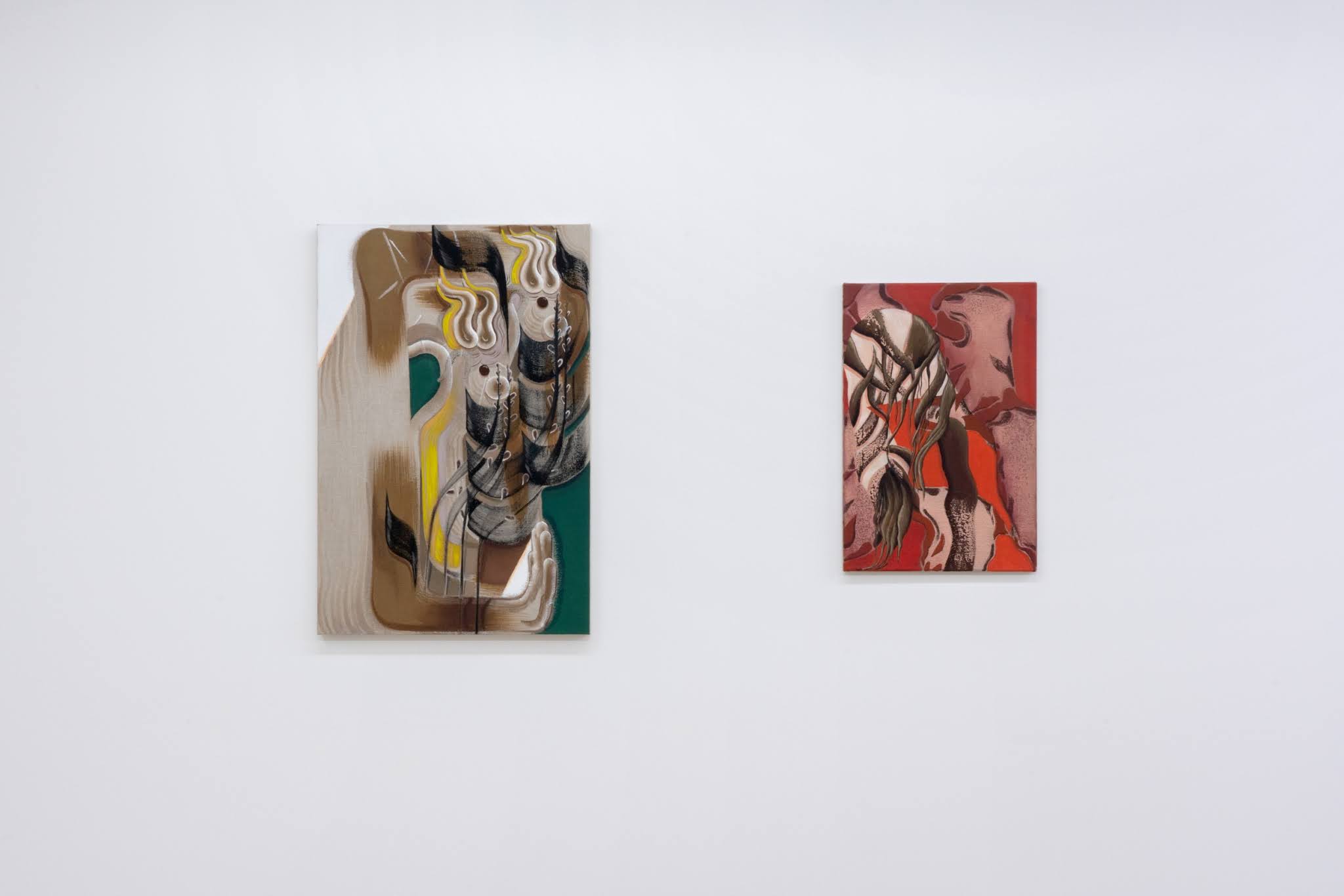 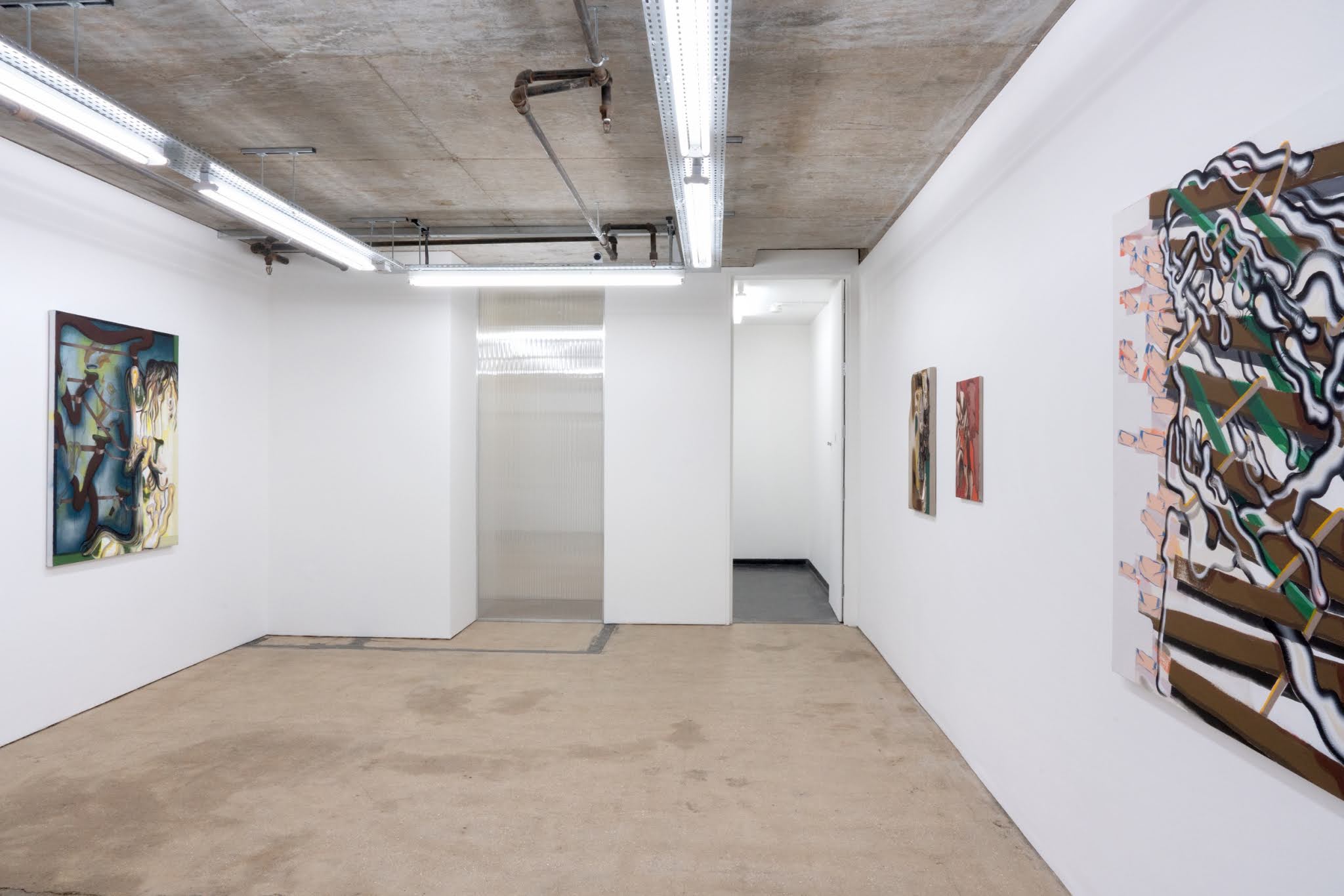 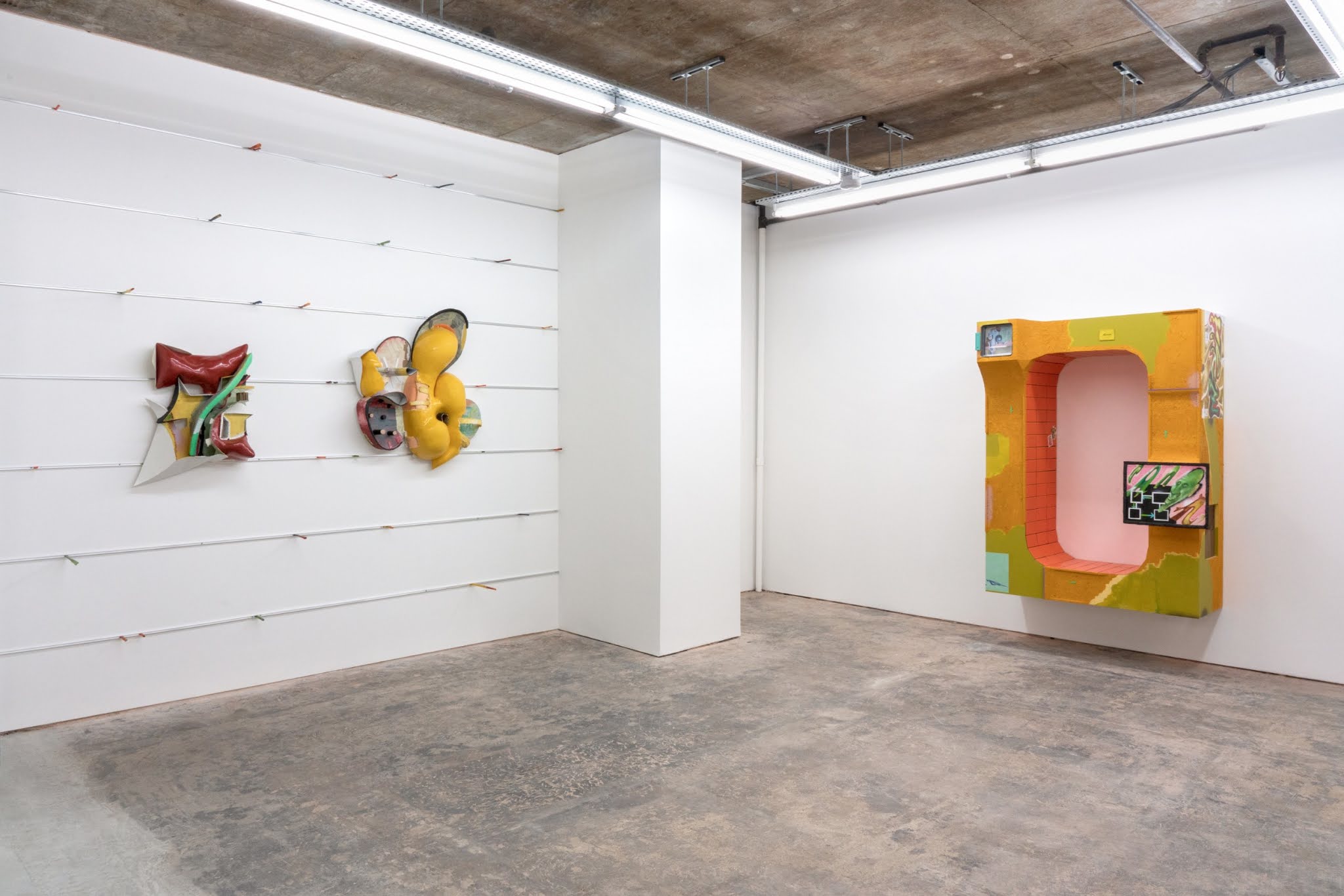 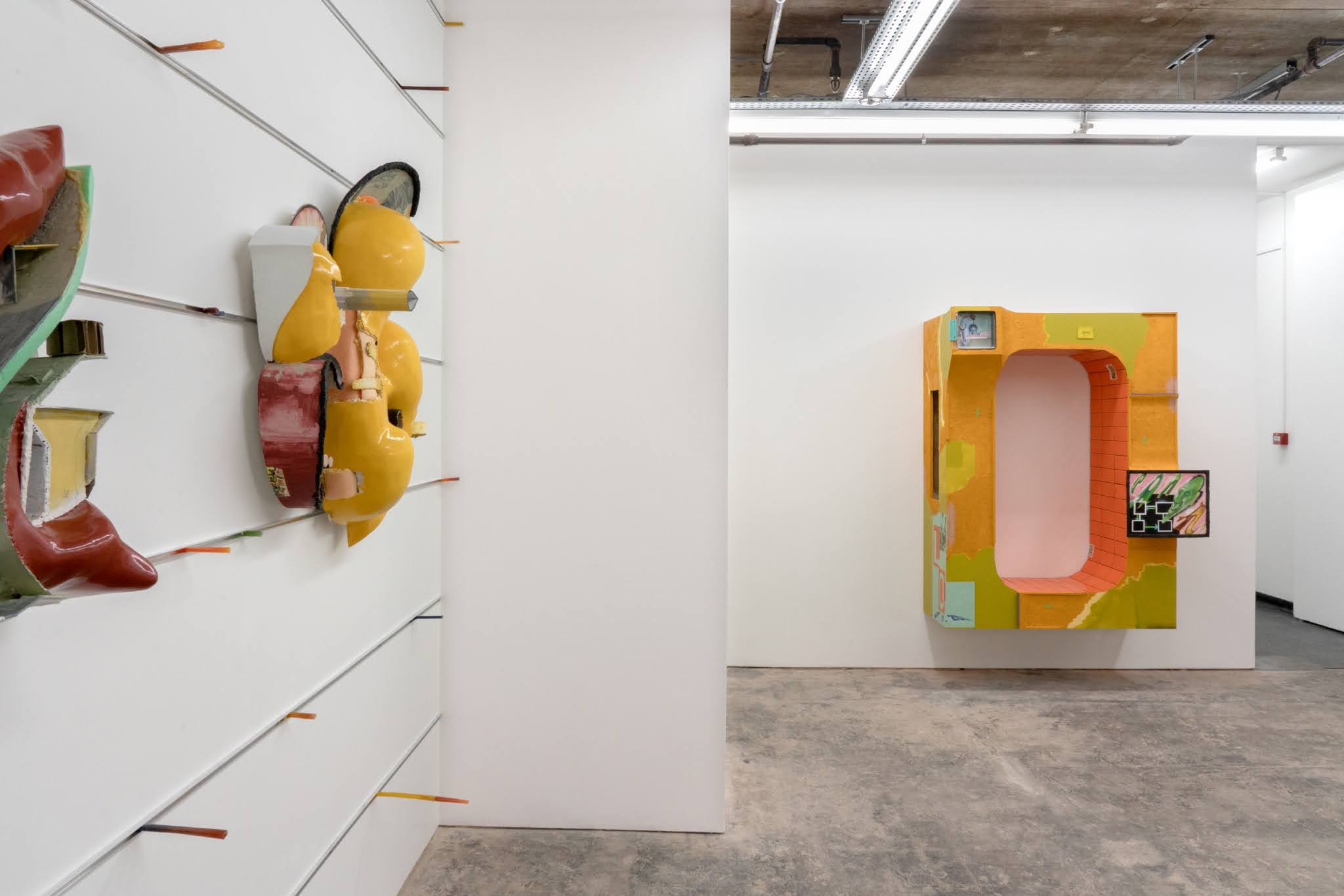 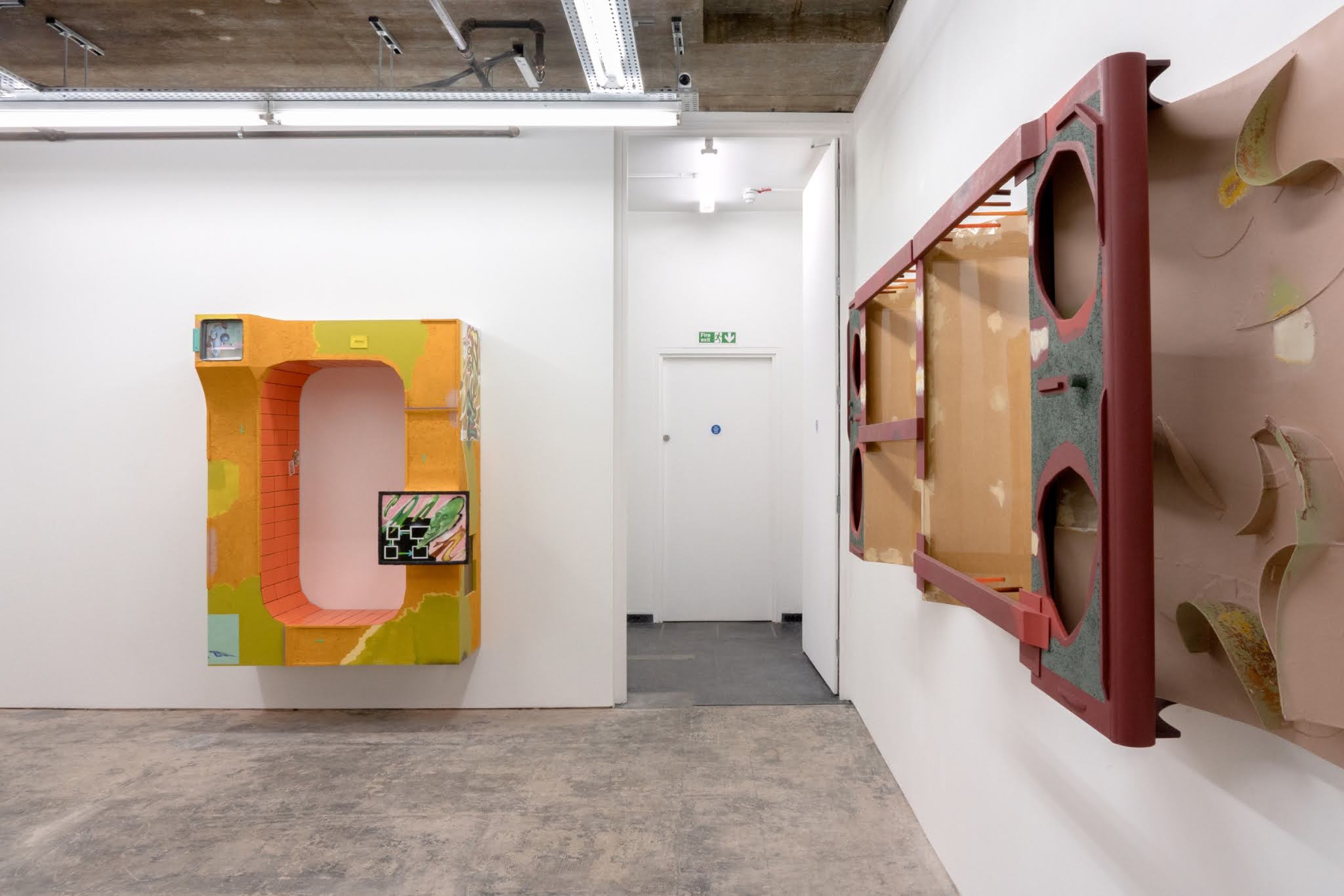 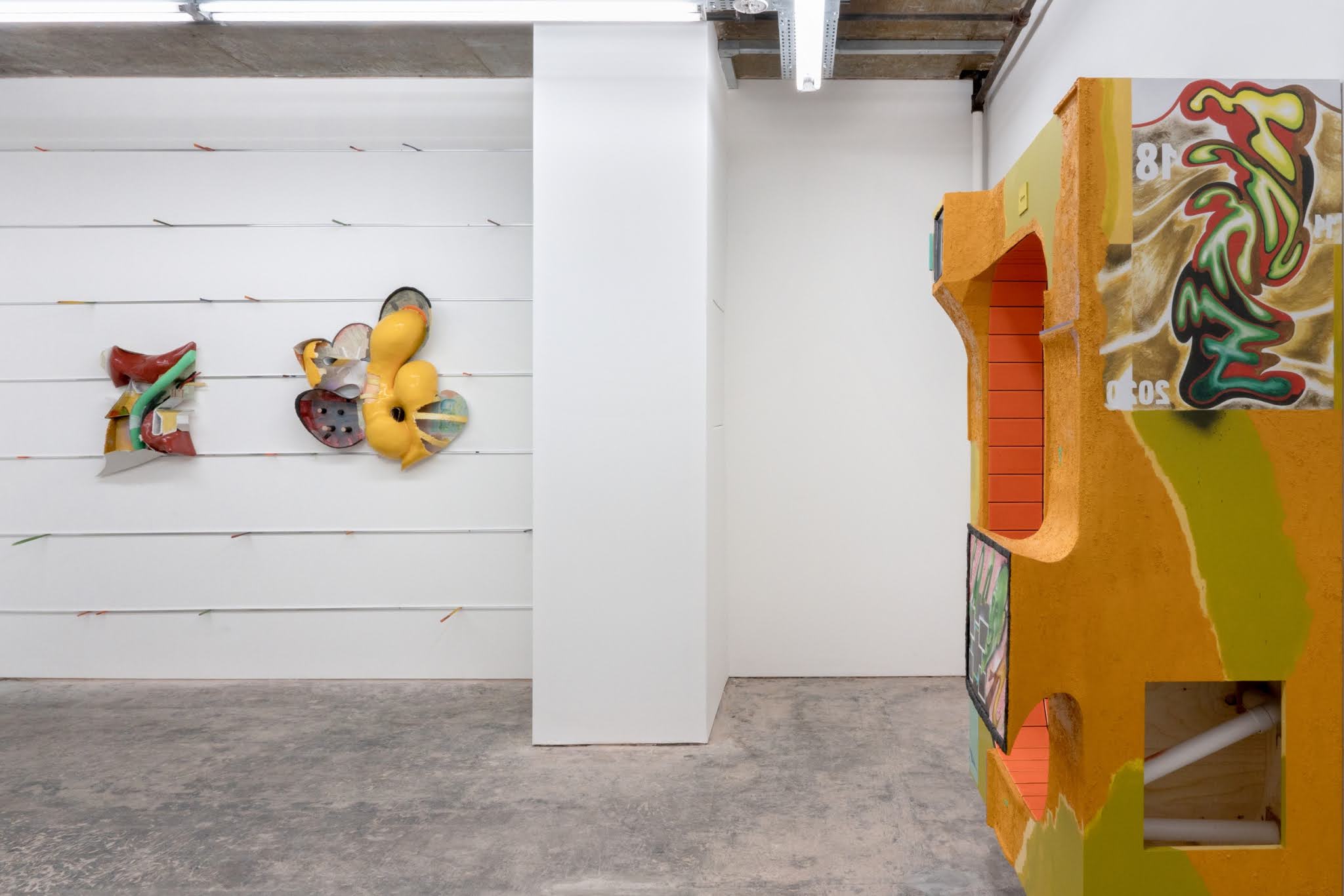 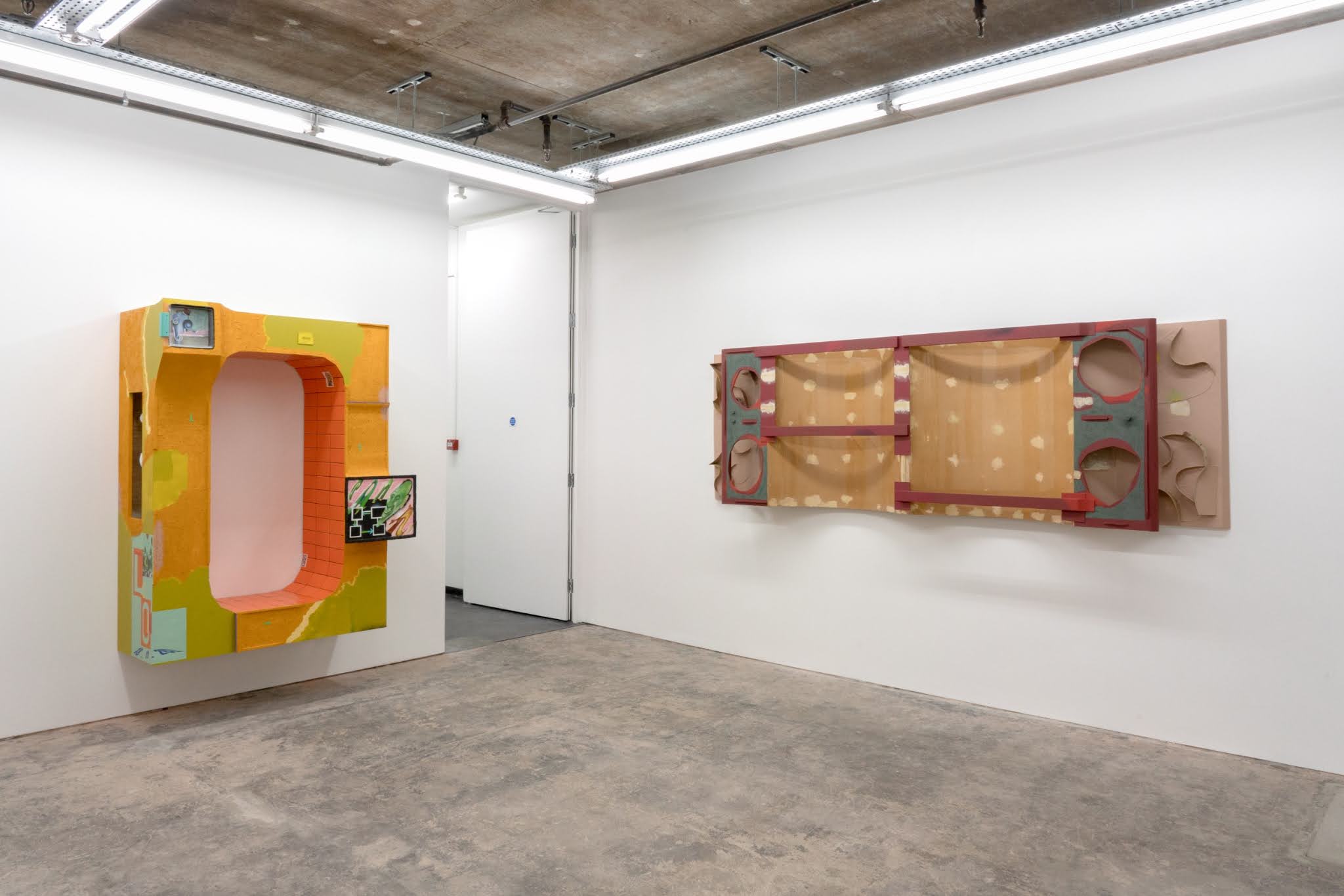 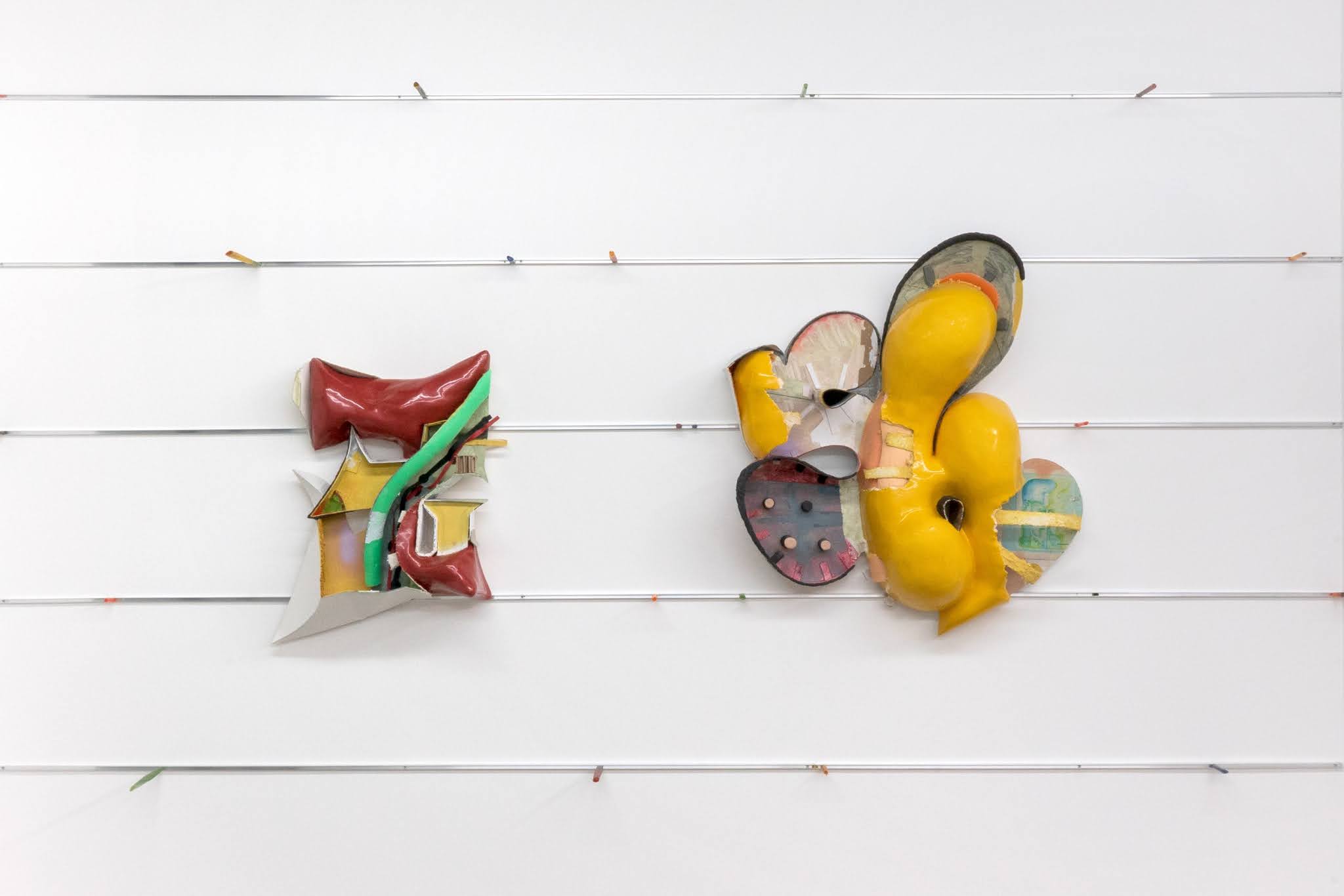 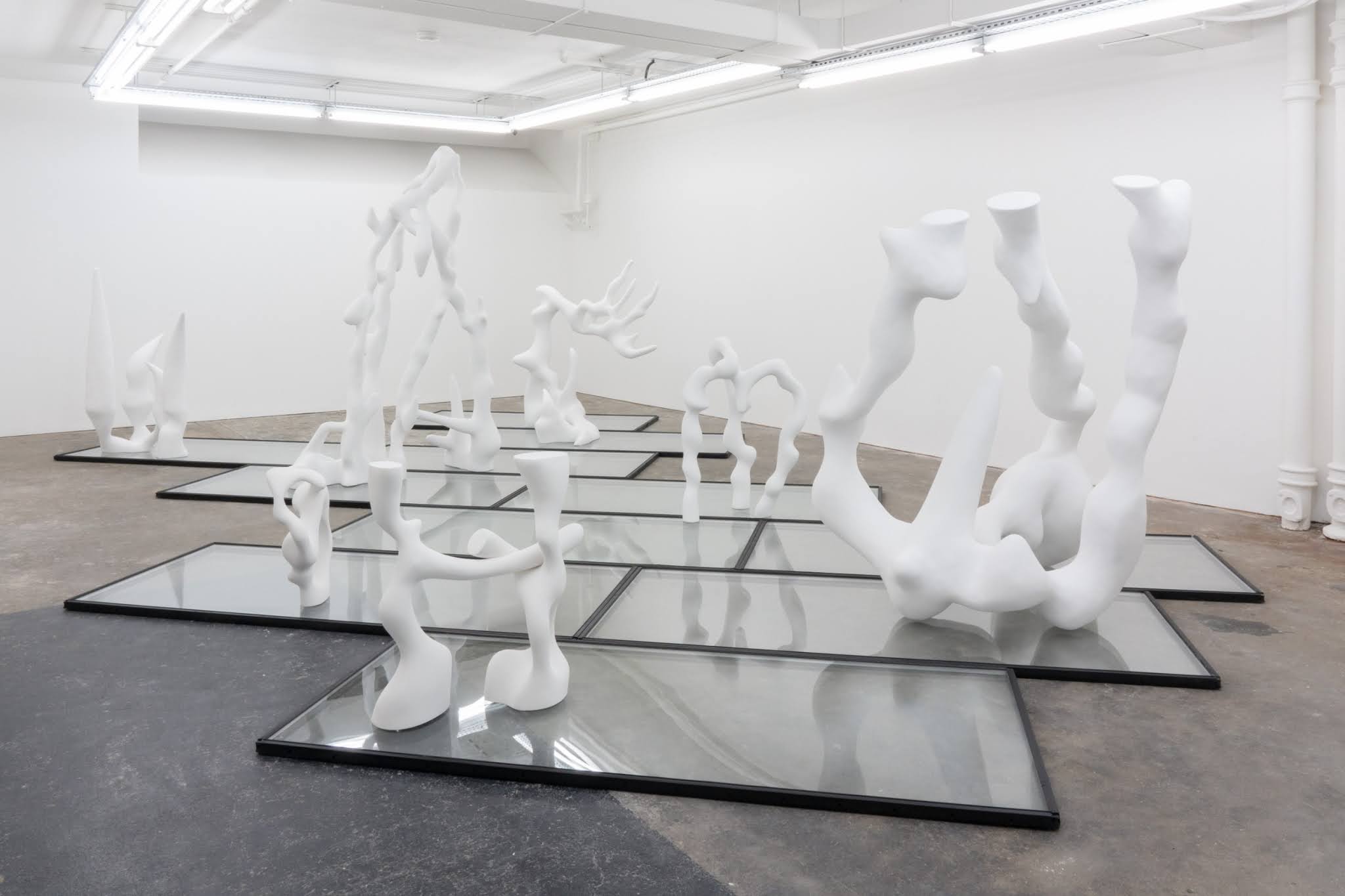 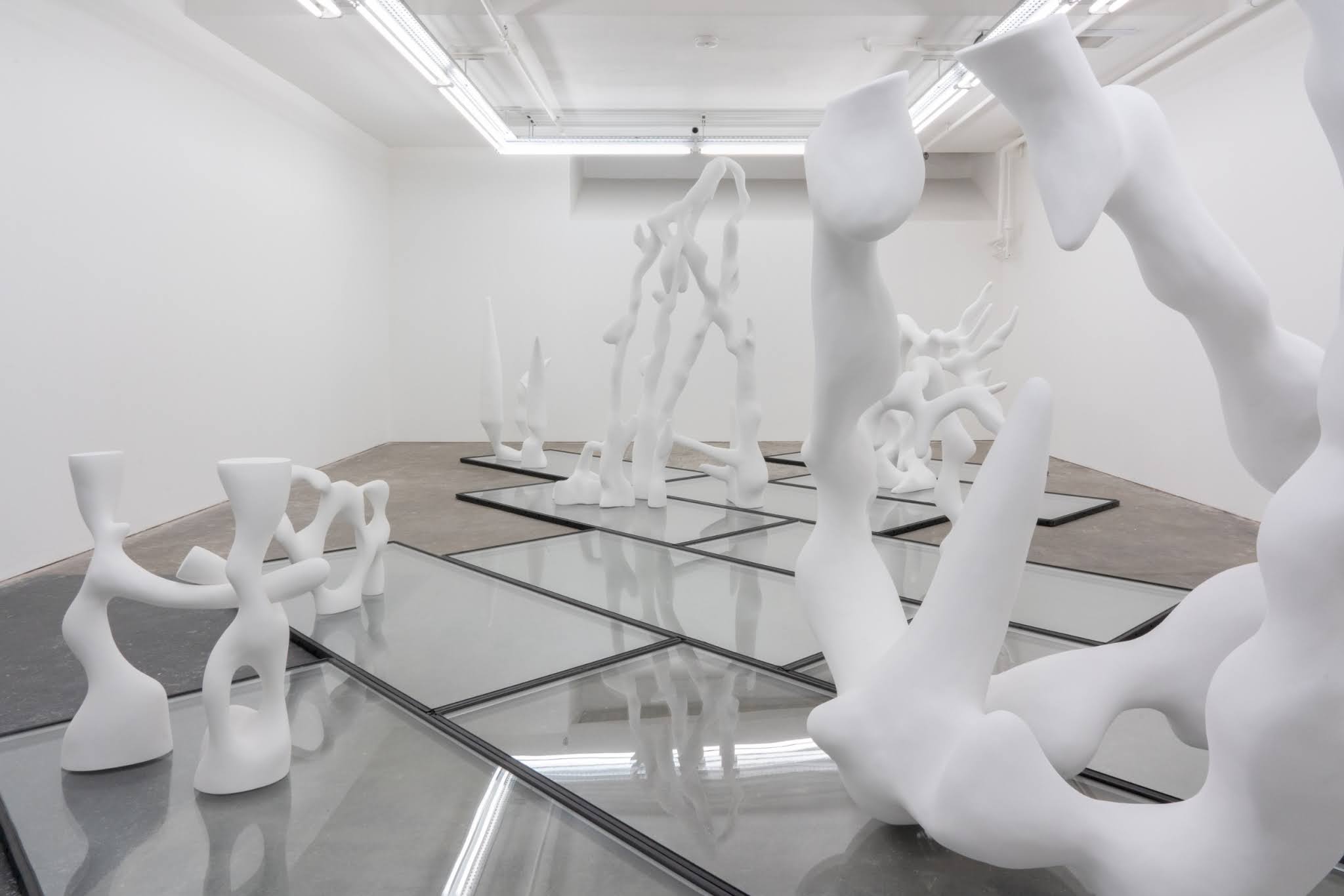 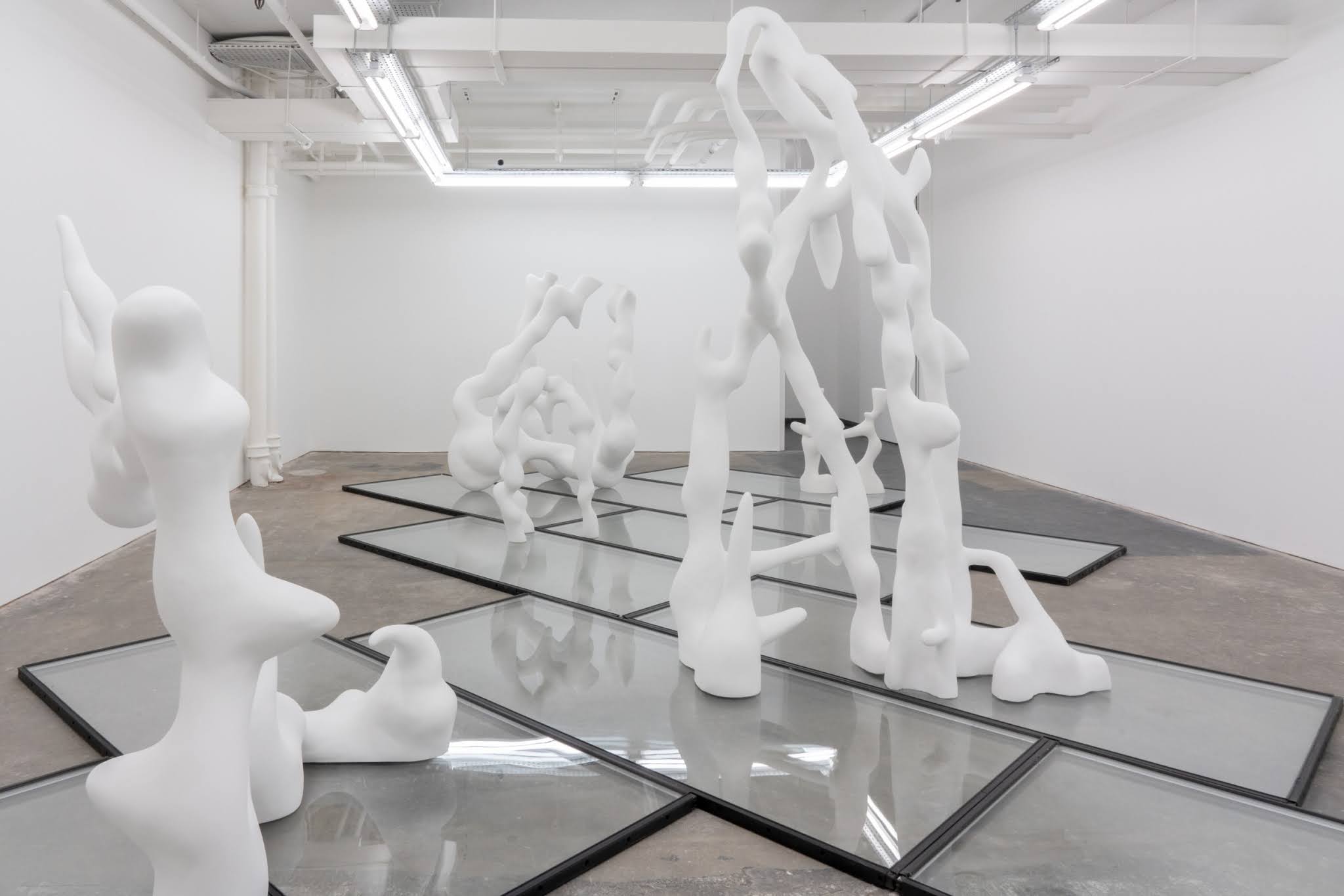 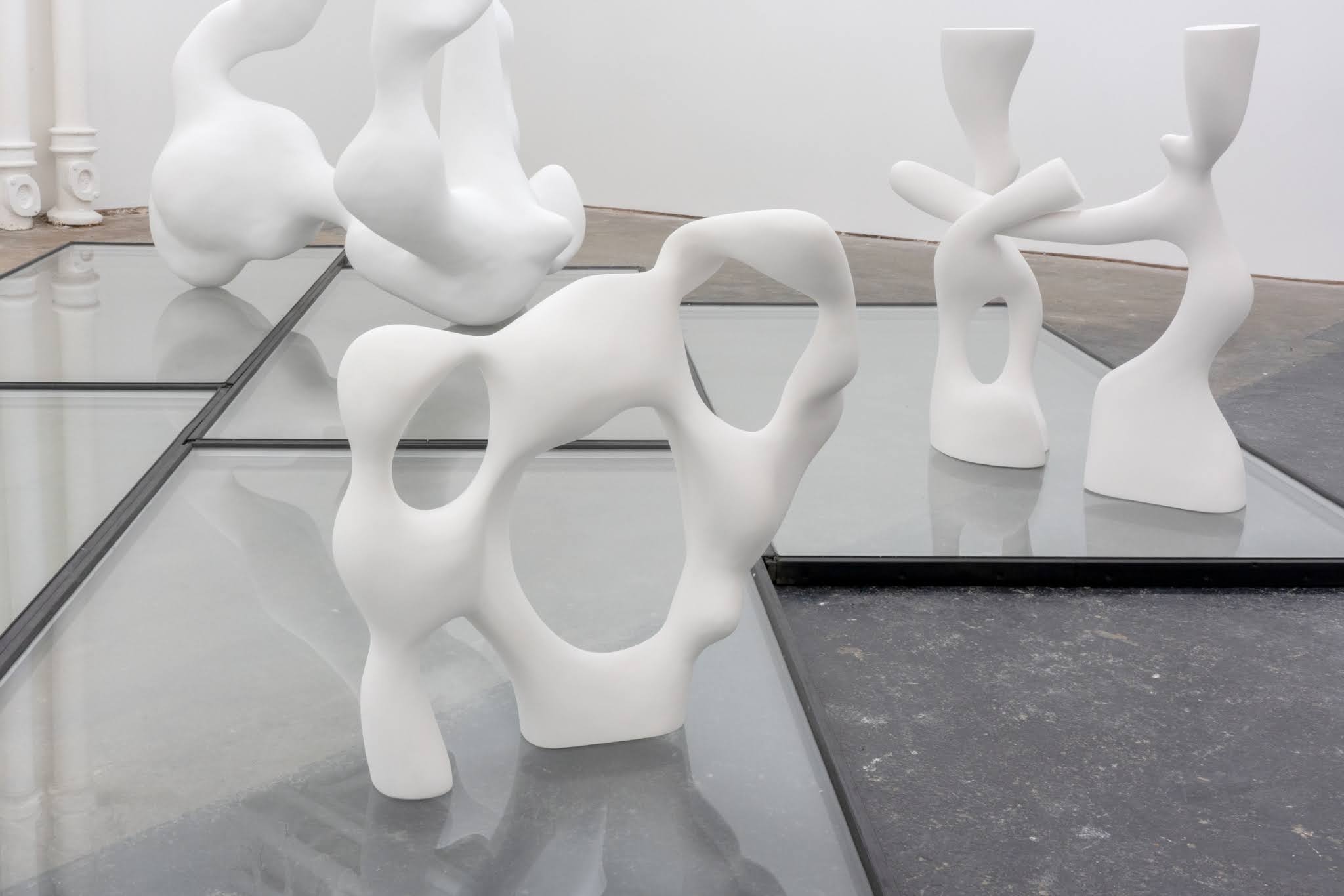 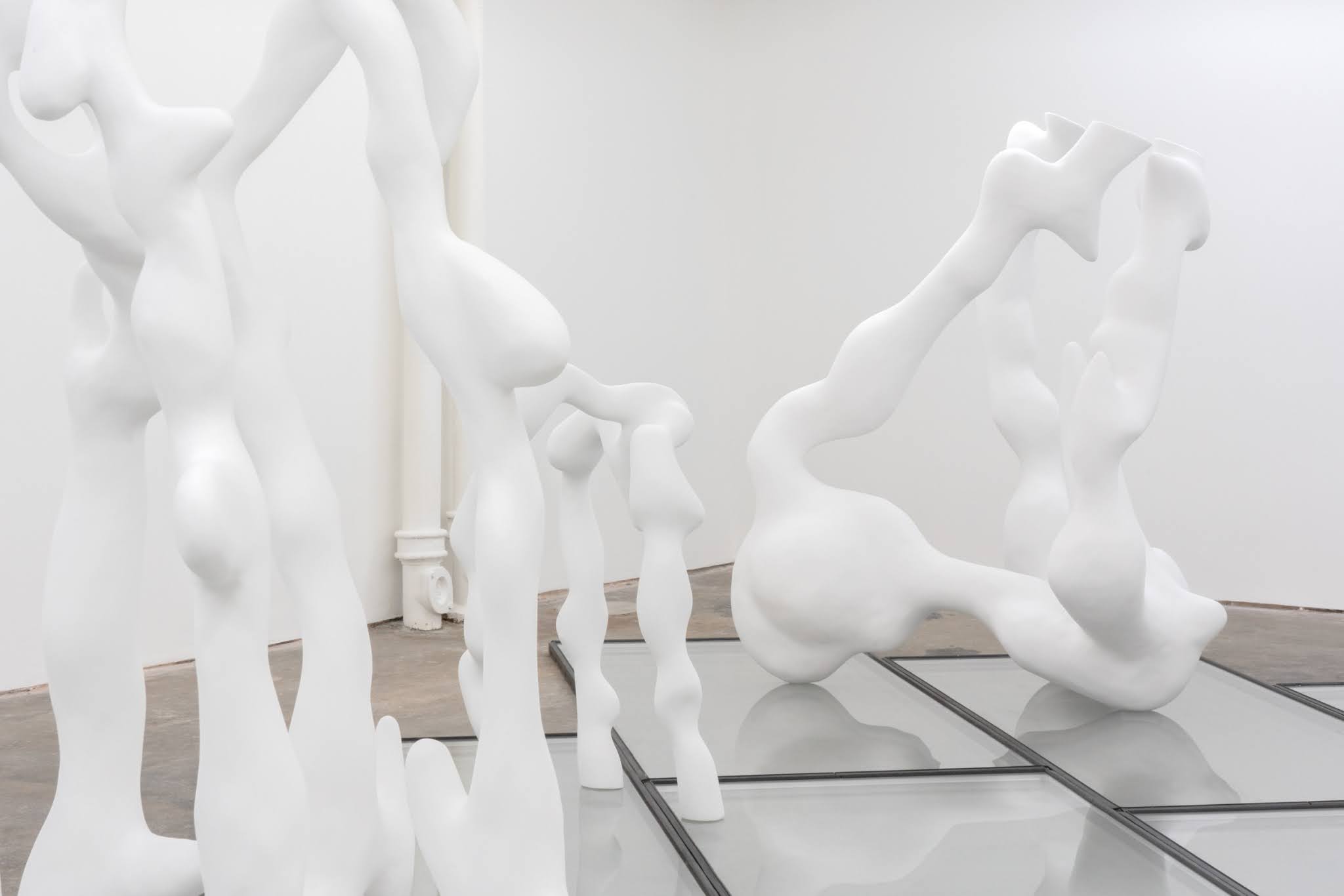 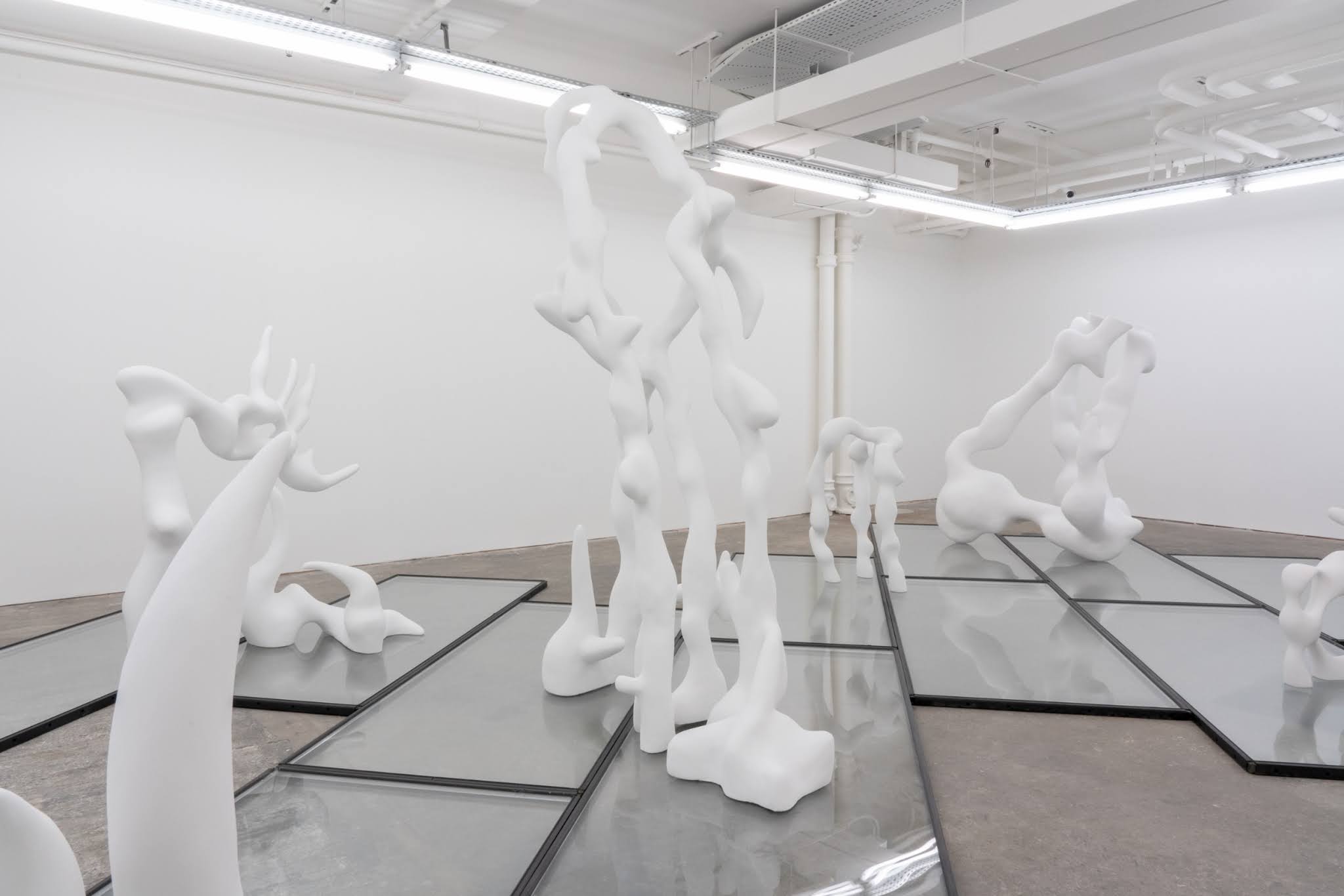 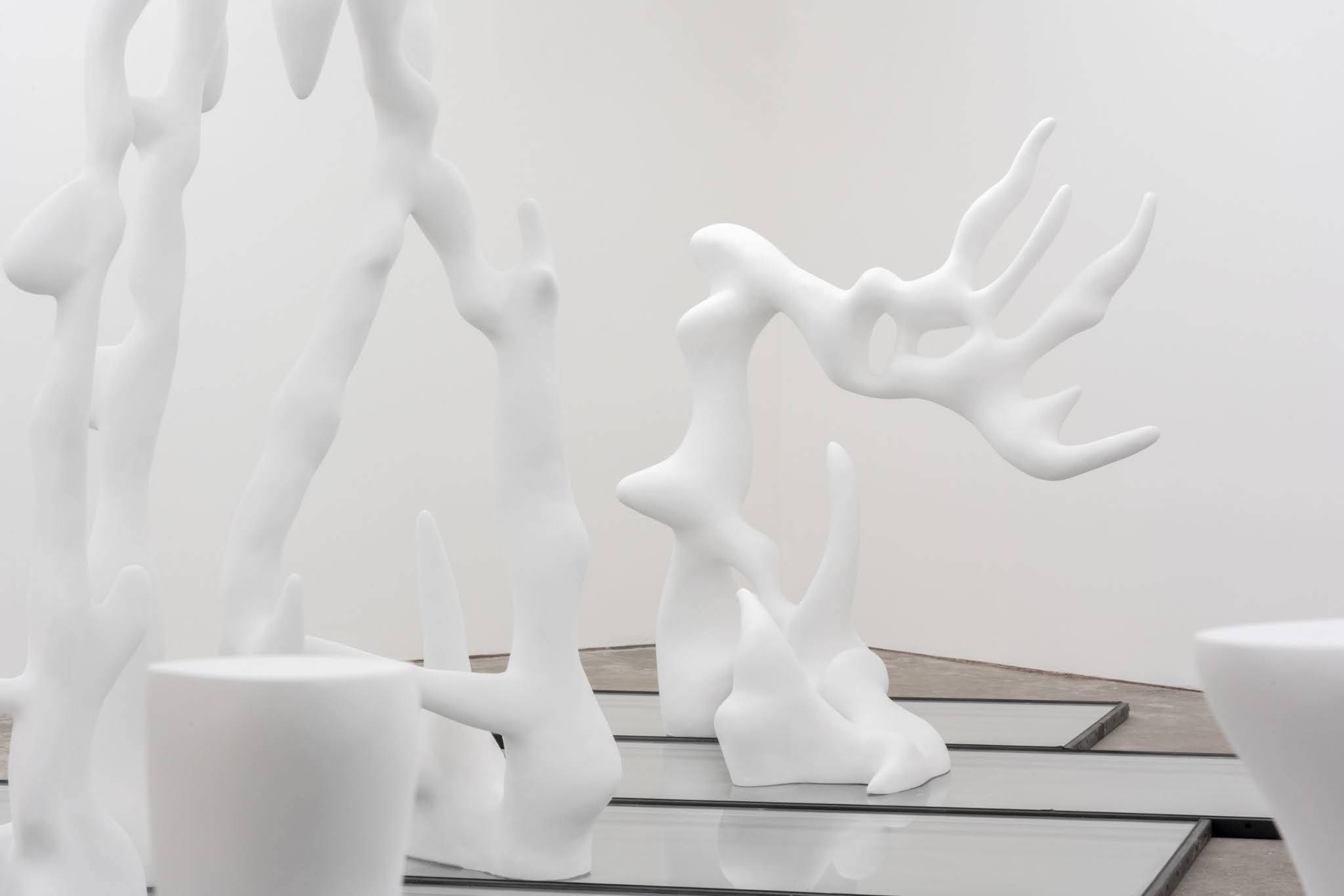 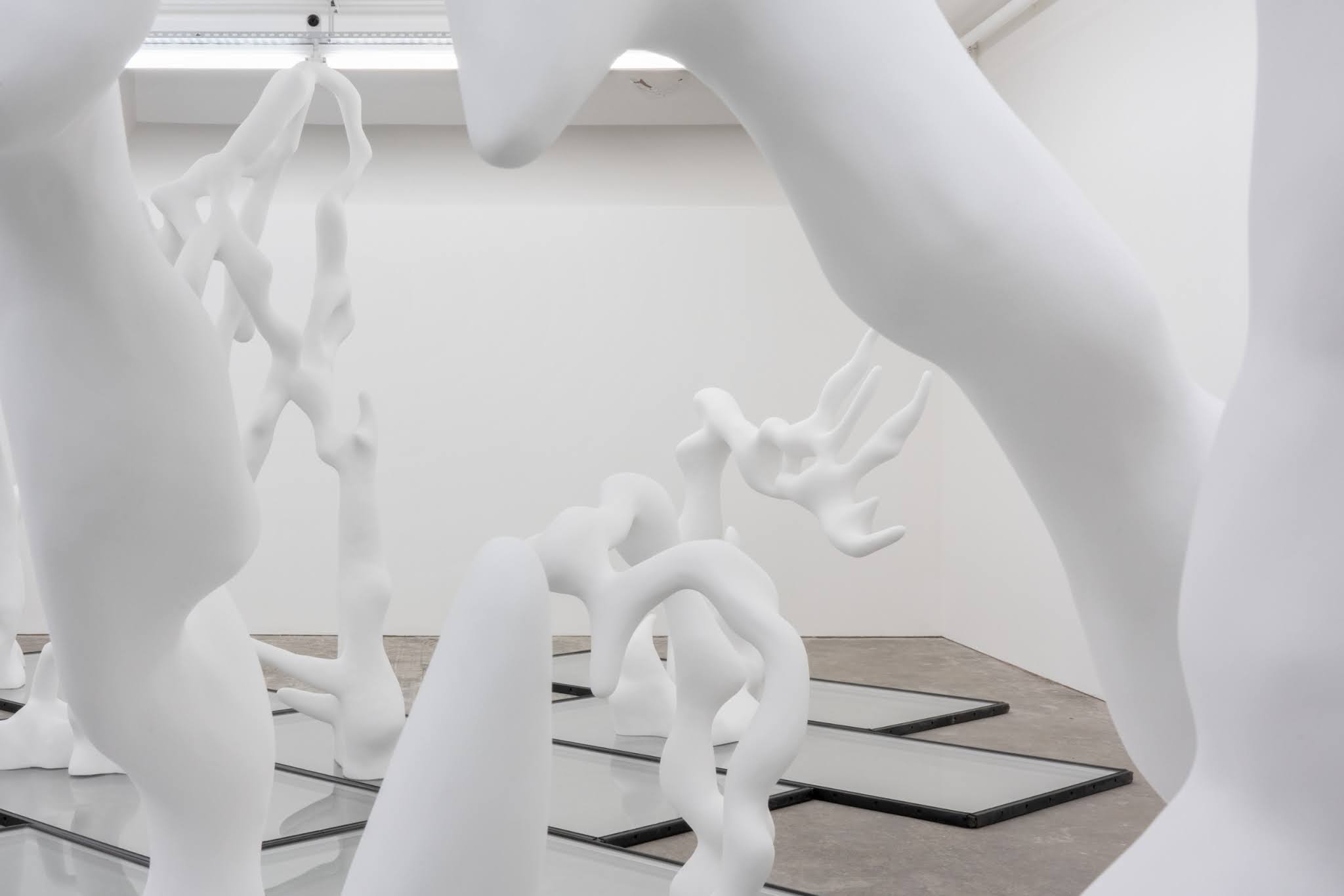 Dancing back and forth across the threshold between abstraction and figuration, BridgetMullen creates mutable, liminal spaces in which half-formed shapes and figures whirl in a constant state of emerging or dissolving. The steady hum of repetition present in each of the five paintings feels like a mirage, hypnotizing us with the illusion of momentum whilst frozen in a moment. Her forms are at once strange and familiar, but always about to morph into something else. Rather than presenting the viewer with a narrative or fleshed out idea, Mullen suggests a workable space that feels as if it’s still coming into being and requires your standing before it to complete it.

Operating as enigmatic and mysterious objects, Laurence Owen’s wall-based multi-media sculptures draw on phenomenological ideas and experiences from urban and natural environments. Incorporating a range of approaches including sculpture, painting and ceramics, Owen’s hybridized compositions fold inside and outside of themselves, offering through materialistic metaphor, wider socio-political ideas around territory and border. By shifting and merging these concepts to create alternative definitions and reframe their commonly understood meanings, Owen hints at notions of these systems operating behind our daily existence. Throughout his work, a collapse between past and present occurs; futurist scenarios appear to simulate and flow into established aesthetics as an equally speculative – science fictional – realm.

Traversing the intersection between the human body and nature, Vanessa da Silva presents an expansive installation comprised of a new series of sculptures. Neither human nor part of nature, these ‘unrooted bodies’ are hybrids in a constant state of mutation, metamorphosing into something still unknown. Projecting up from a platform of glass windows, these forms of varying size punctuate the space like stalagmites and challenge perceived orientations through their reflections—alluding to the uprootedness of the present moment in which systems, institutions and ‘truths’ are caving in. The organic irregularity of these smooth white structures recalls the boned architecture of our bodies, yet they hint at something altogether different and like the external structures around us are subject to collapse.