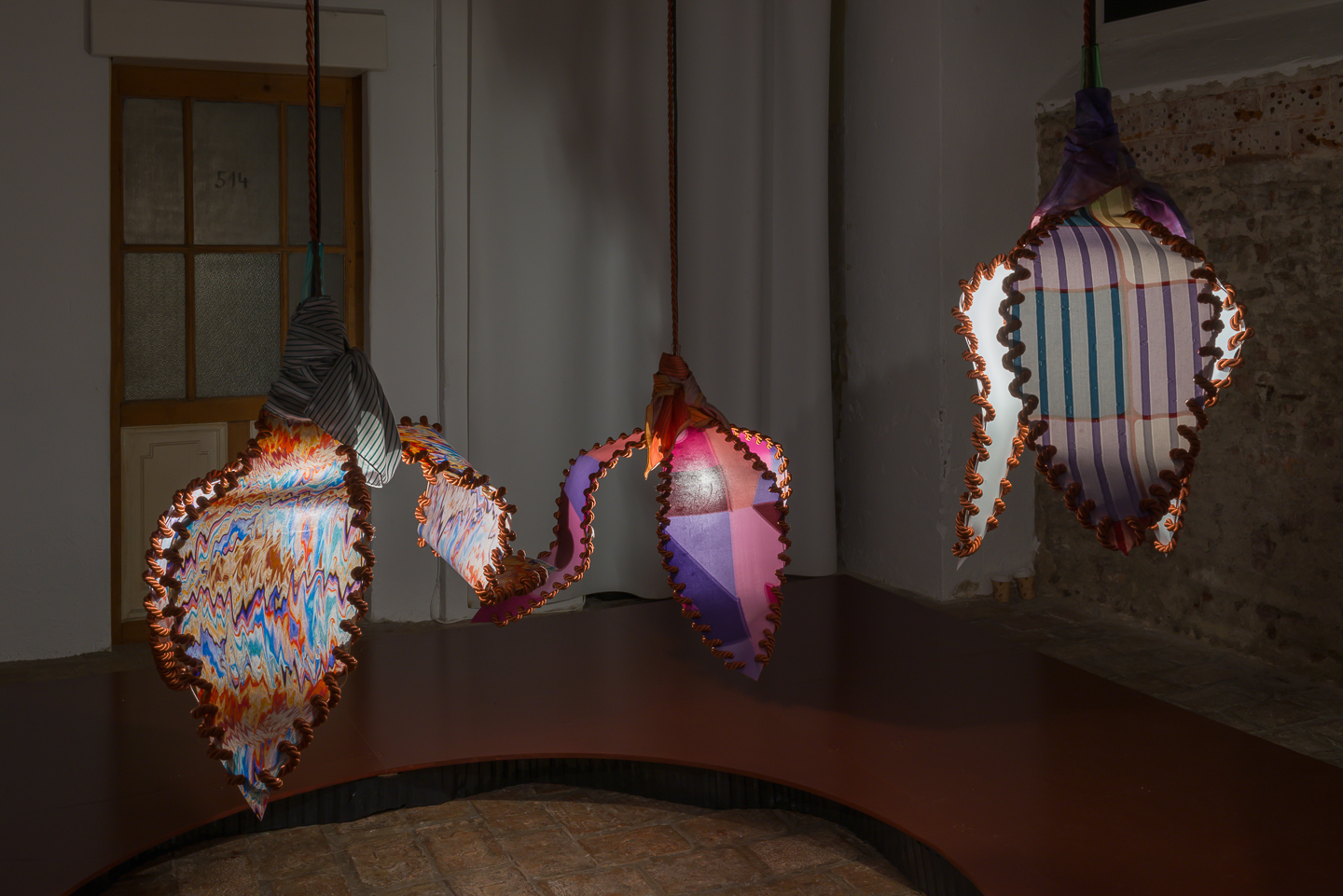 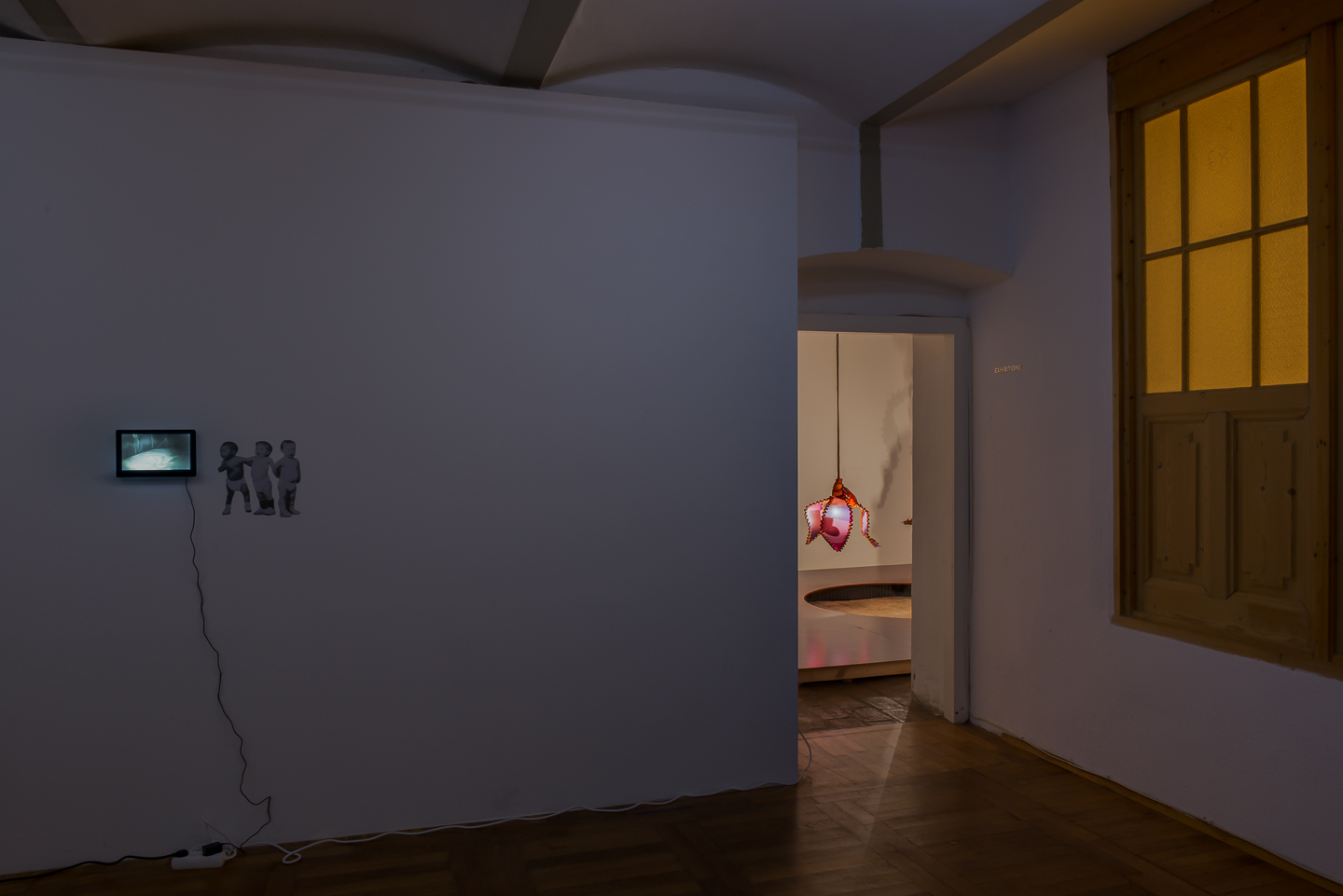 Photo credits Sophie Pölzl and Flavio Palasciano
„Immediately after arriving I began to feel better [...]. The path to the lake was wide and well worn
but enclosed on both sides by all kinds of foliage: chokeberries and I don‘t know the other names,
but yellow and purple and red. I felt extremely protected. Everything was held in place-the lake by
the hills, the hills by the white strands of cloud in the sky-and I began to feel whole.“ (1)

The exhibition by Stefano Faoro and Michaela Schweighofer proposes a space in which the viewers are confronted with an opaque context. It creates a relationship between the already existing space of foundation and the objects and images of the artist’s installations as much as the viewers who are part of a set. In the dialogue of their works they evoke a world in semi-darkness, the title-giving „Half-lit World“, which is expressed in the interior design as well as in the sense of space as a diffuse atmosphere.
The title is based on a quotation from the novel „The Little Sister“ by the US-American author Raymond Chandler. Chandler had a significant influence on the genre of „hardboiled fiction“, which had its peak in the USA in the 30s and 40s. As in most of these crime stories, in Chandler‘s novel the detective is confronted on one hand with the antagonistic network of organised crime and on the other with a corrupted social system. Chandler‘s protagonist finally comes to the conclusion: „Maybe we all get like this in the cold half-lit world where always the wrong thing happens and never the right”. Schweighofer‘s and Faoro‘s „Half-lit World“ presents itself as a space of the interior that withdraws from the visibility of the exterior. This is expressed in the works both in the dimension of architectural interior space and in the dimension of the body‘s interior and psyche.
The first part of the exhibition is marked by a stage, a motif that Schweighofer repeatedly uses in her practice to design a form of staging or a platform of exchange. In foundation, the stage picks up on the charged „psychology“ of the space there, a feeling of the eerily secret. The artist contrasts this impression with a moment of familiarity, conveyed through forms, colours and materials that seem to tell past stories. The stage is a double floor that has moved into the room. Through a circular opening in the midd- le, the stage reverses itself as an elevation and refers to the underlying structure. This blank space also reflects the metaphor of the lake - a common subject for the uncertain in crime stories.
The double floor becomes a false floor that appeals to the affective forces of fiction. Faoro‘s video works also allude to hidden events and infrastructures that lie behind the facades. He highlights the unconscious, diffuse aspects of systems that condition the production of subjectivity but remain in the realm of the invisible. He presents three video works in digital photo frames that show unspecific shots of opaque spaces. What they have in common is that they mark boundaries between the inner and the outer: Shots from the inside of ventilation shafts in public buildings that cleaning companies created, or a car ride through a snowy night - footage the artist finds online. The presentation in photo frames, however, associates private living spaces. For the cryptic sound backdrop, Faoro borrows recordings of stomach noises that people make after eating a certain meal. Here the artist establishes a relationship between inner and outer experience: images of individual or collective memories evoke feelings and present themselves as reactions to the body.
A passing through spaces can have a similar effect on the physical sensation. The sign with the inscription „Sneaky Kids“, which is attached above the entrance of the exhibition space, deliberately plays with the ambiguity of whether a private club or a commercial place of entertainment is entered here.
The visitors encounter the so-called „Sneaky Kids“ again as cut-outs in the exhibition space, where they apparently watch the offered videos. The images and the lettering are taken from a poster that Faoro found in a hospital. But they could also be from an advertising poster from the 90s. The sneaker-wearing babies are intended to reflect the diversity of potential consumers and promise an attitude to life that is redeemed by the purchase of the product. The neo-liberal logic of capitalism already sets in with the kids of the 90s when they learn how to walk.
The connection between merchandise, lifestyle and social position is also reflected in Schweighofer‘s objects, which create a proximity to interior design. For the lamps in the form of lily blossoms, the artist used silk scarves, vases and cords that she has collected over the past eight years. They carry the artist‘s personal stories with them and at the same time convey a feeling of cosy familiarity as well as strange enchantment. Similar to Julie Becker‘s installation works, interiors appear here: „volatile and provisional, conjuring sites for temporary refuge and fantastical escape“ (2) This impression is supported by a diffuse light that emanates from the objects themselves and simultaneously enlivens them: „If you’re the moon that shines, I am the sun that lights you”.
Schweighofer‘s sculptural objects are also reminiscent of iconic Tiffany lamps and art nouveau handicraft forms. Once an attempt to bring art and life closer together, the ornamental designs have since been co- pied many times and adorn mass-produced everyday objects. An advertising text of a lamp manufacturer expresses how the consumer object is marketed as an image of taste and as a reminiscence of a past time: „Lily Tiffany lamps add a touch of the fantastic to any room, be it in your home or office. […] Glimpse the style and beauty of old world class meeting modern convenience “. (3)
The presence that the exhibition „Half-lit World“ creates within the space does not only allude to an individual experience, but ties in with collective experiences that are shaped by social conditions and everyday and popular culture. At the same time, an emancipatory potential unfolds in the semi-darkness as a grey zone away from the visible, which is able to evade the hegemonic structures and thus creates new spaces of possibility.
Press text by Juliane Bischoff. Show produced by Jennifer Gelardo.
Tags Daily Lazy Exhibition., foundationvienna, Michaela Schweighofer, stefano faoro