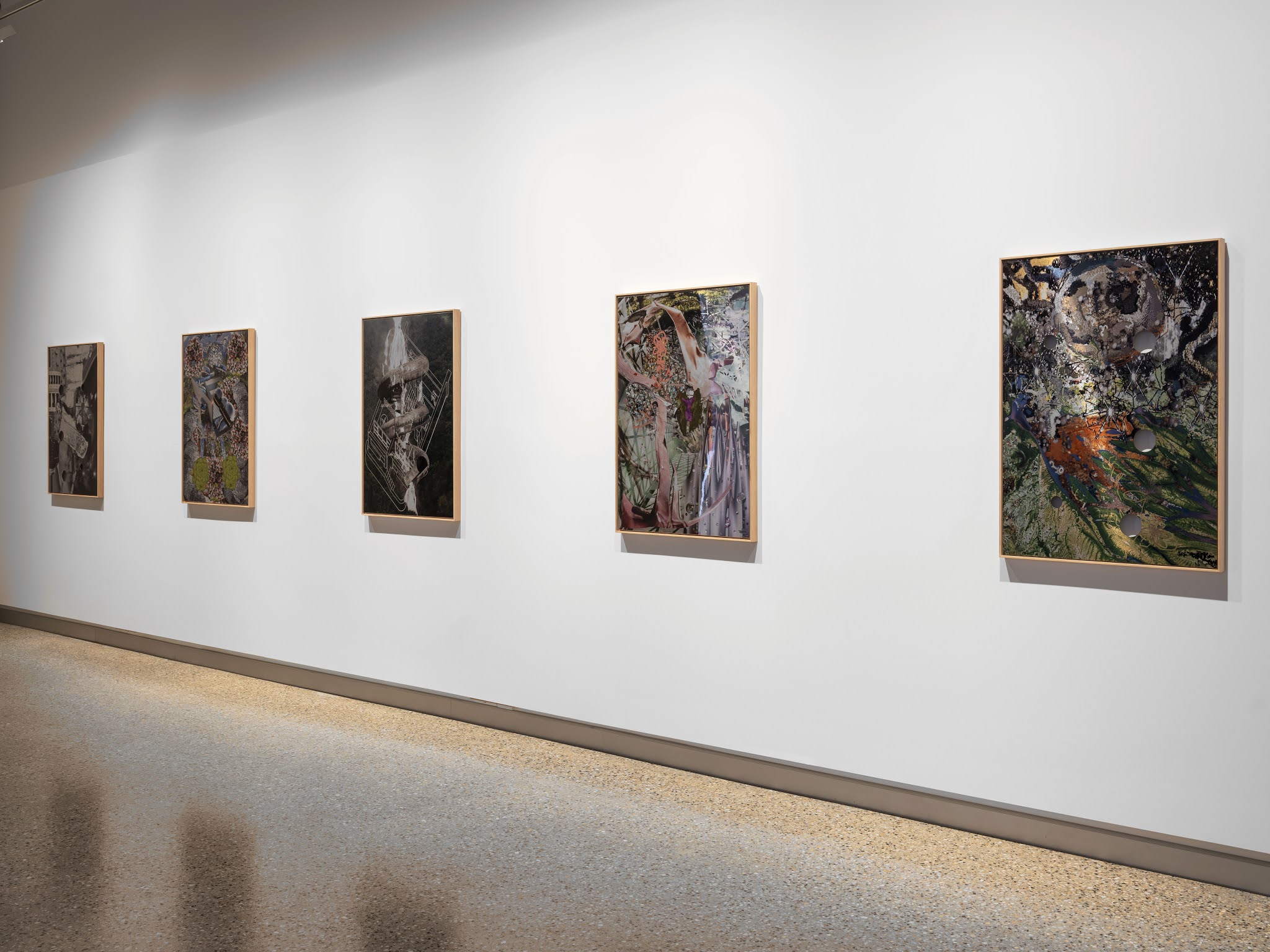 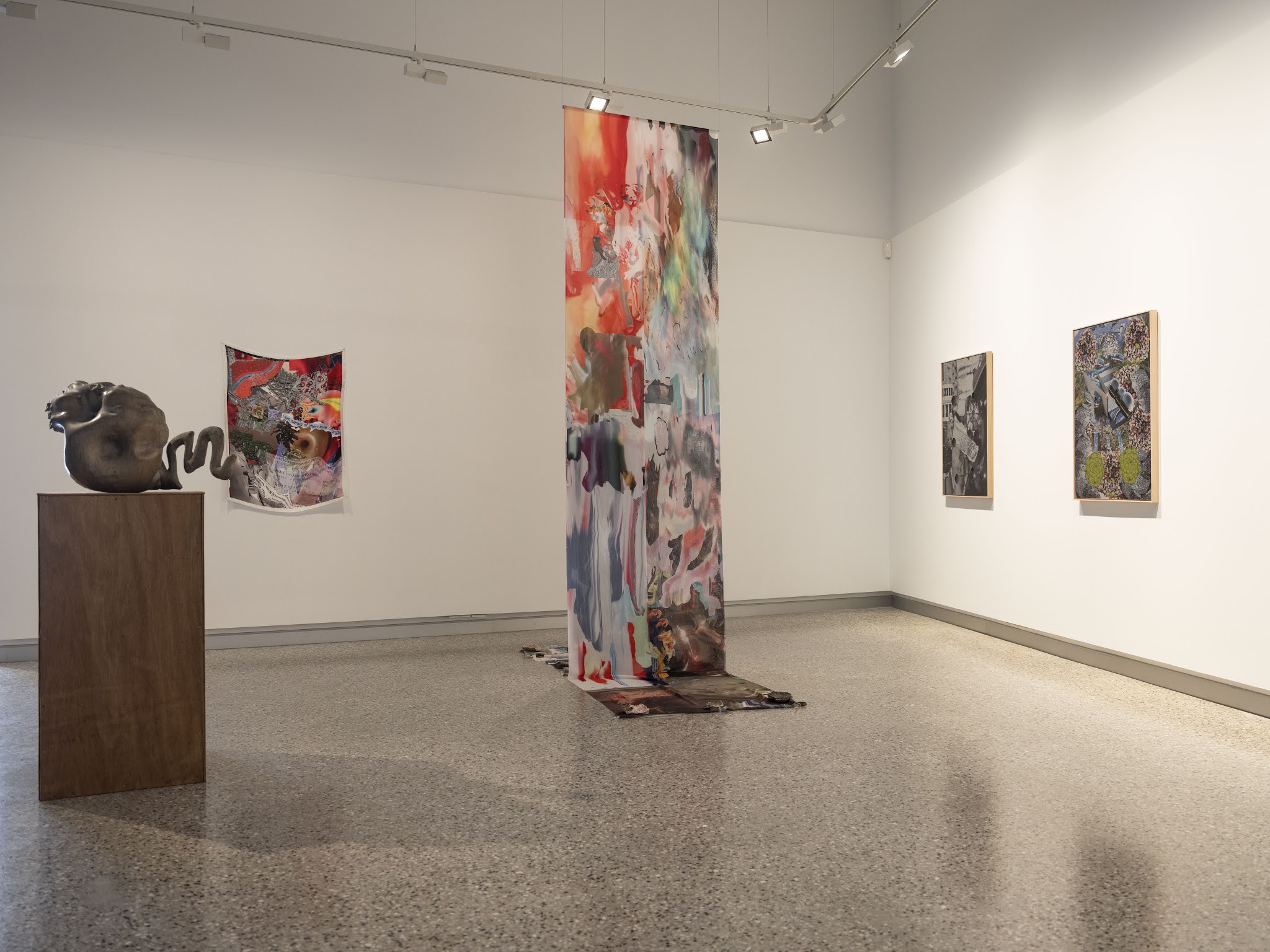 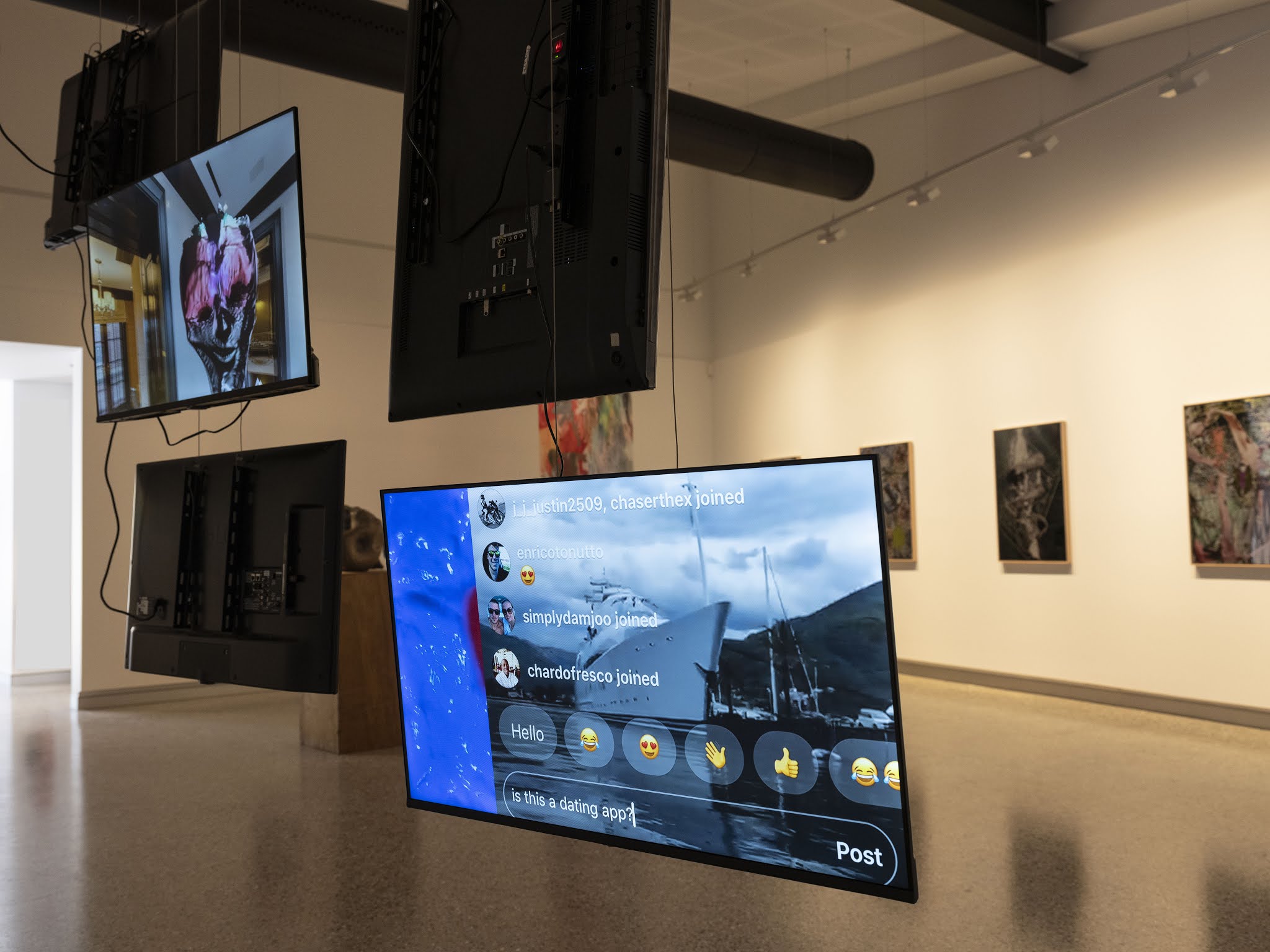 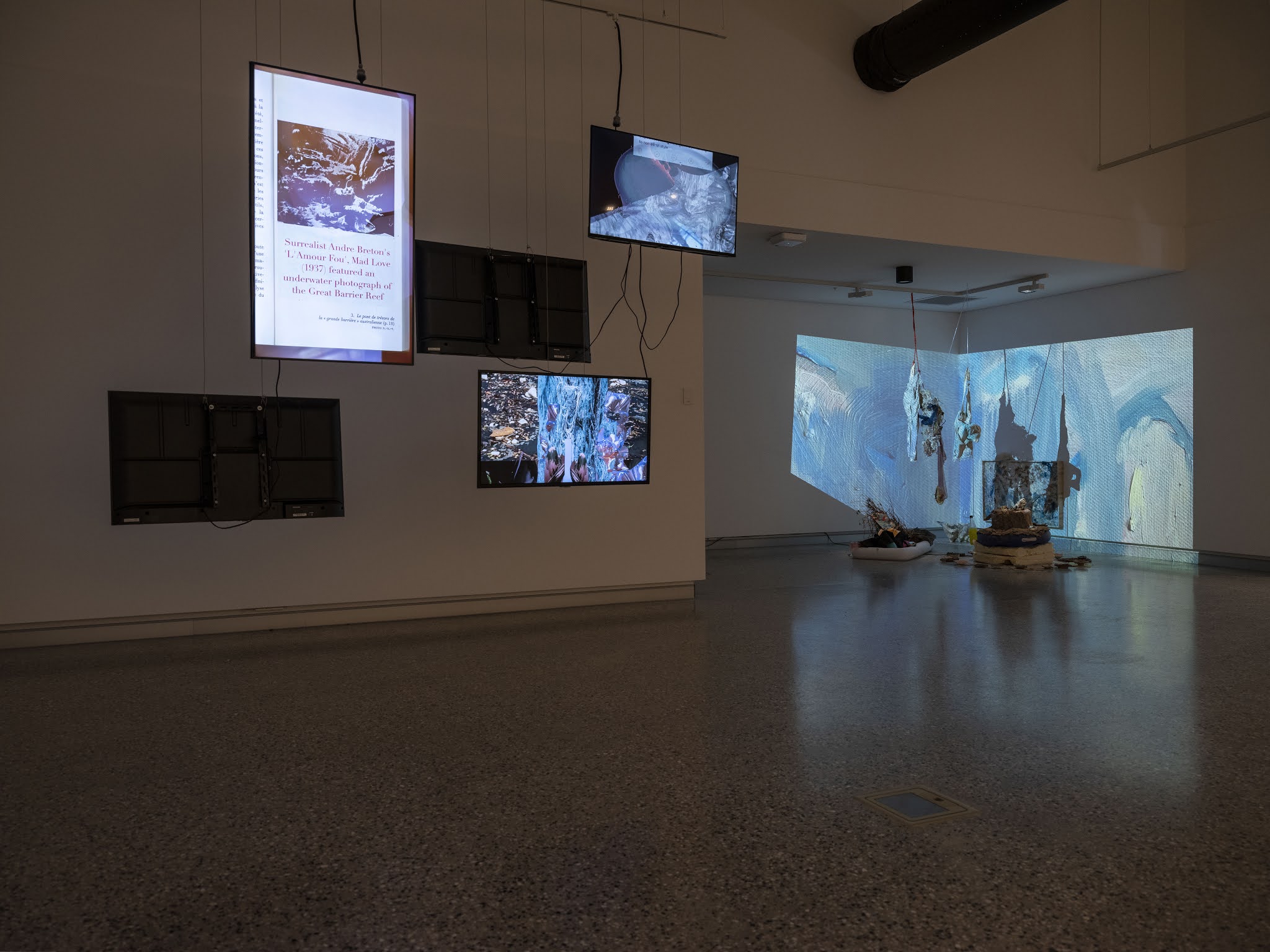 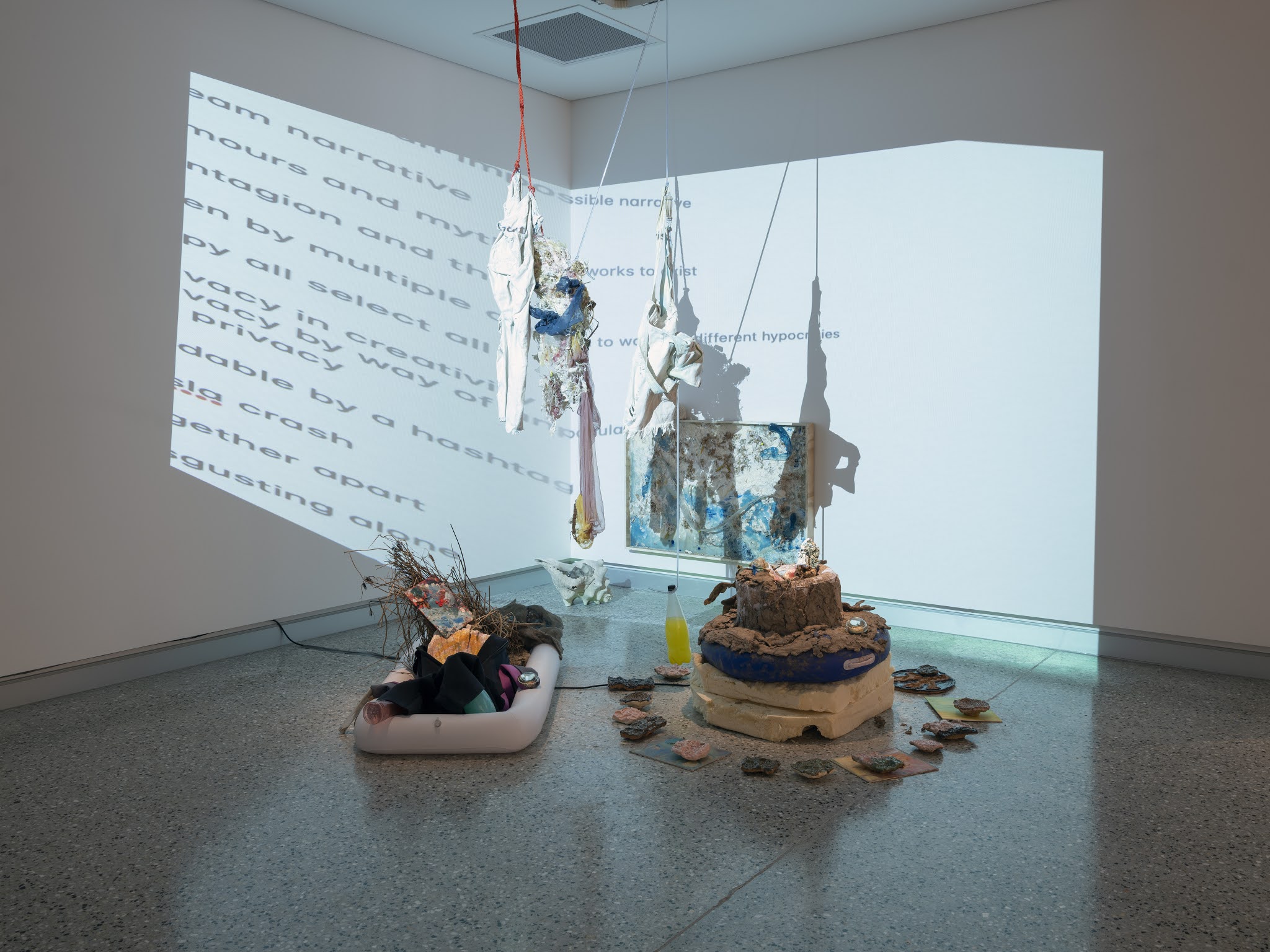 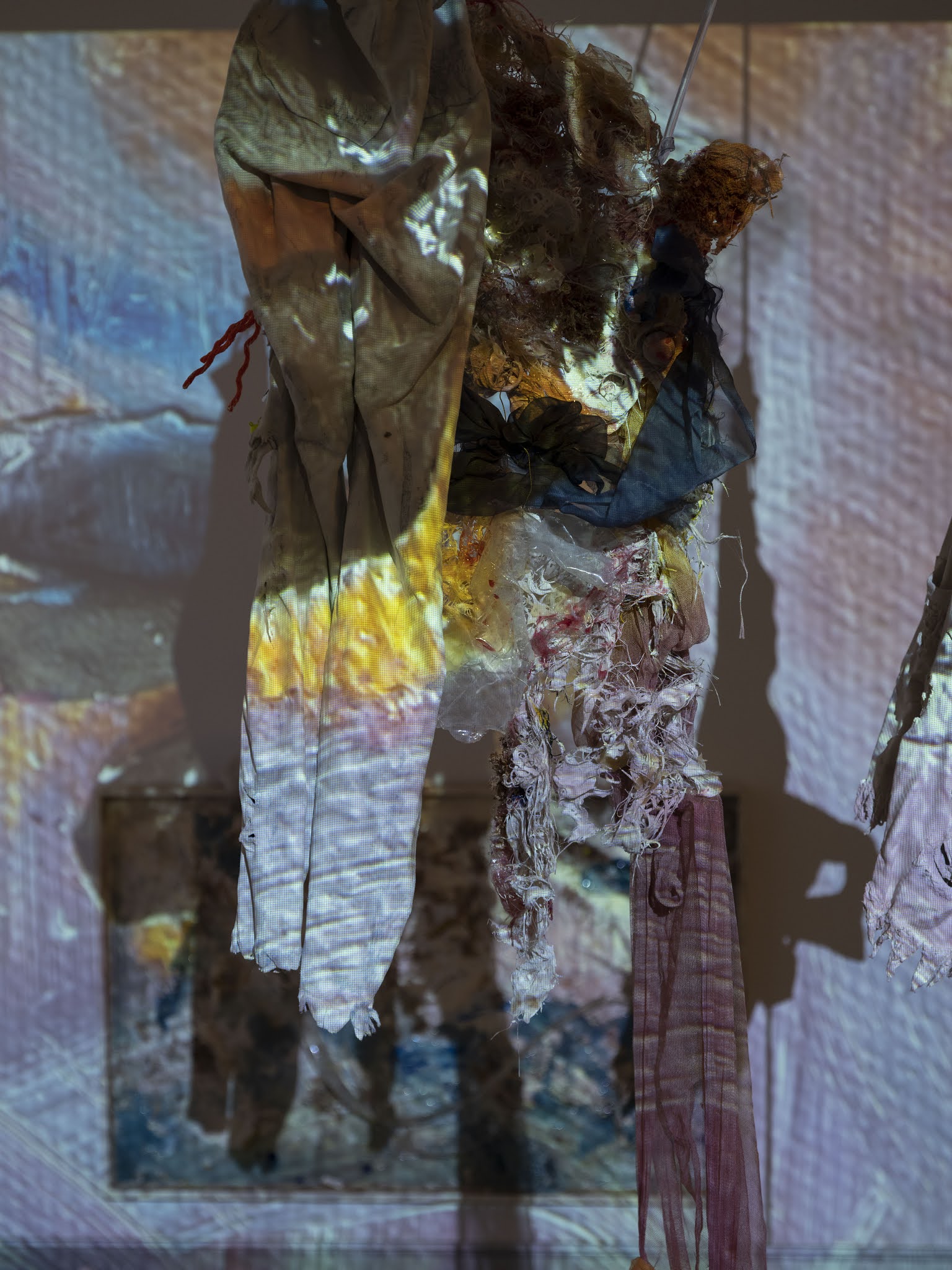 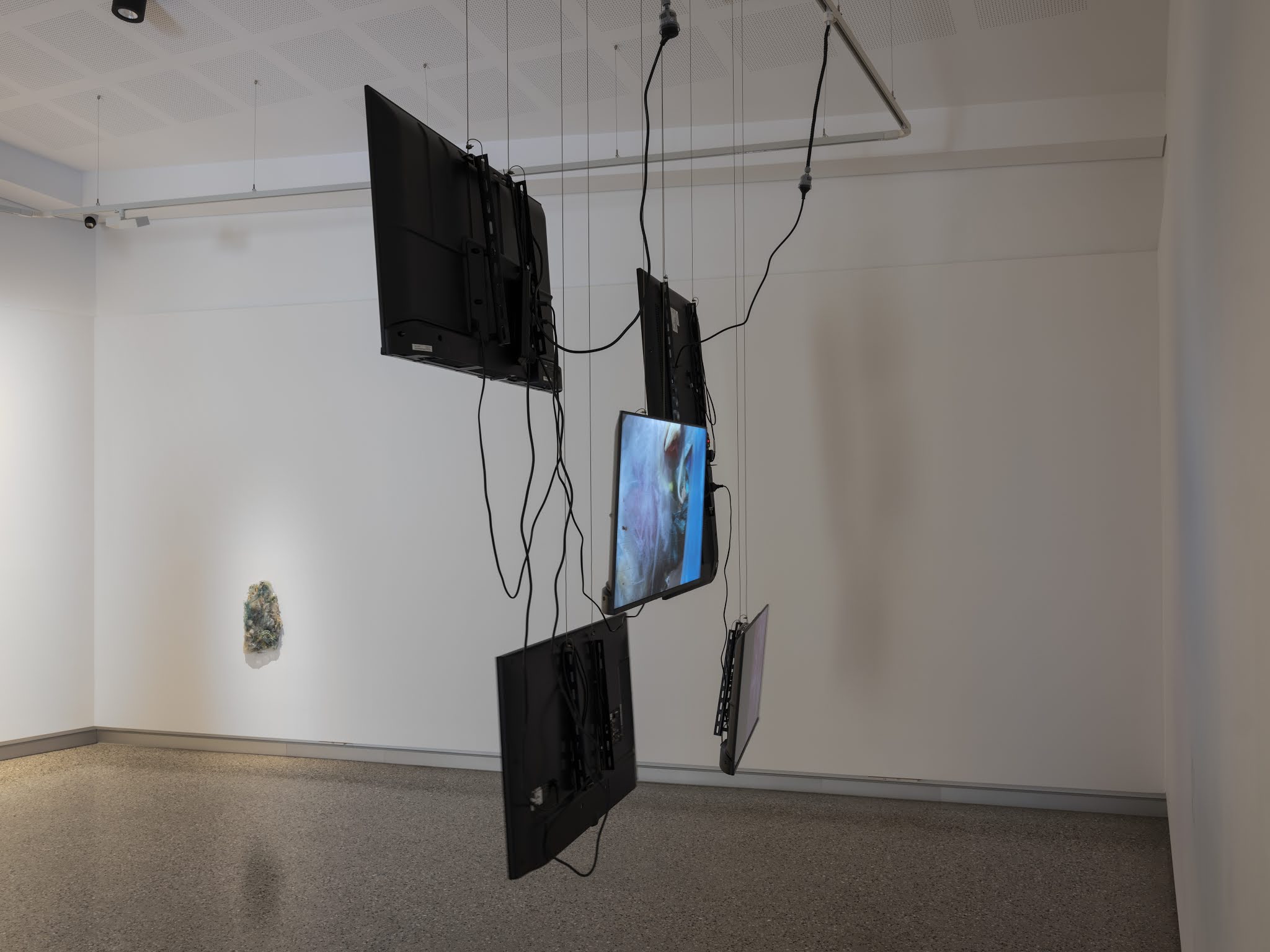 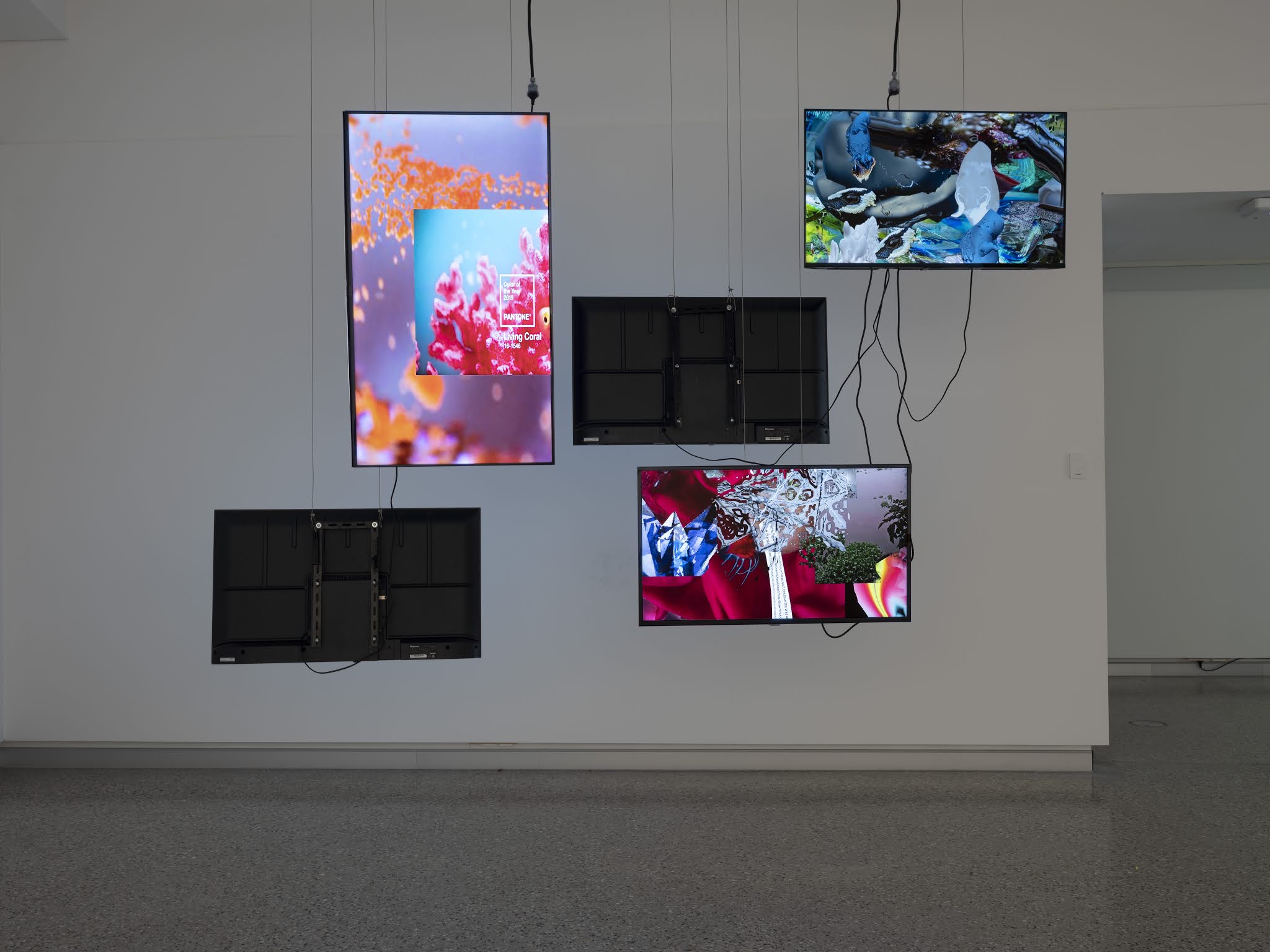 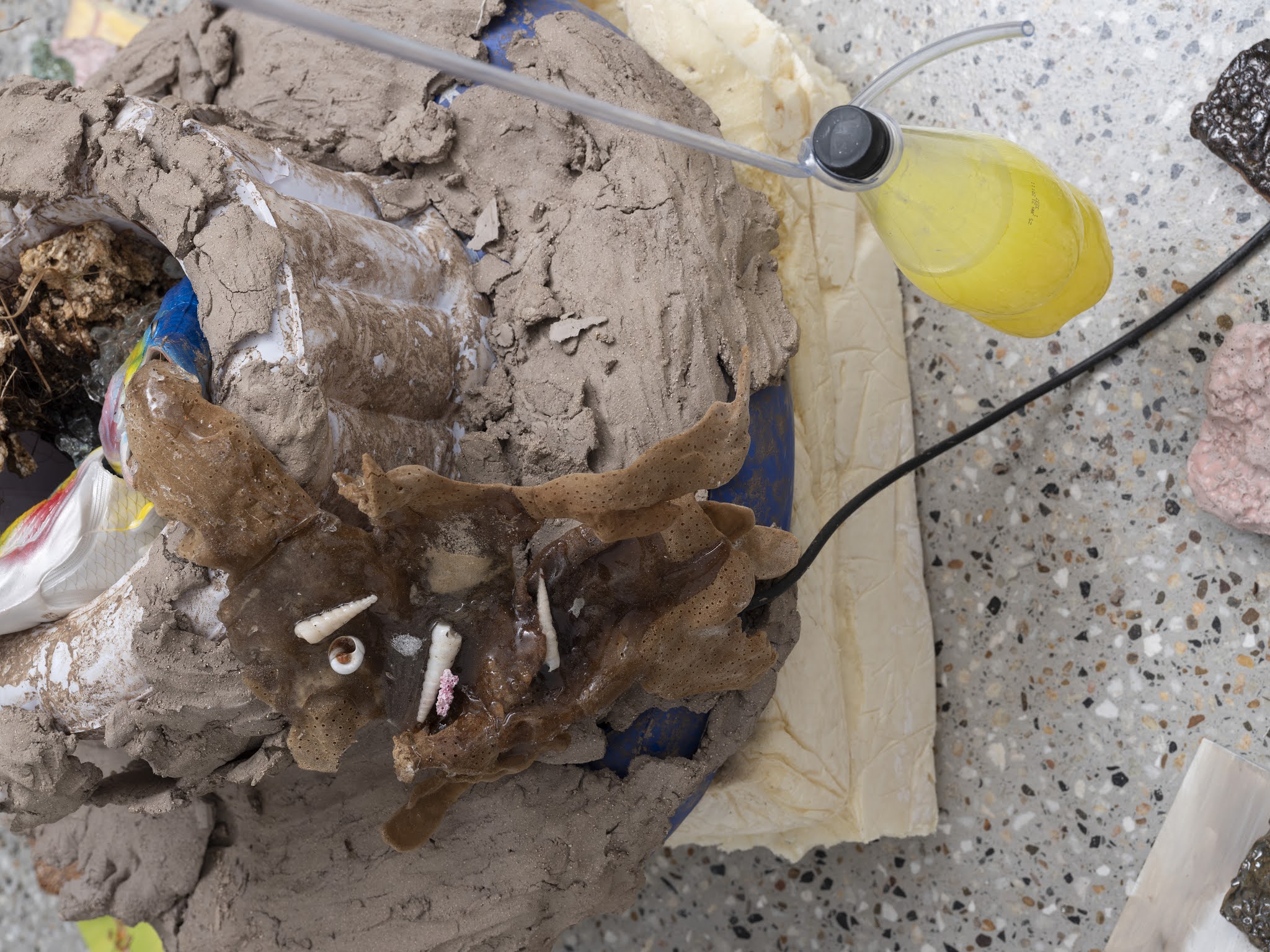 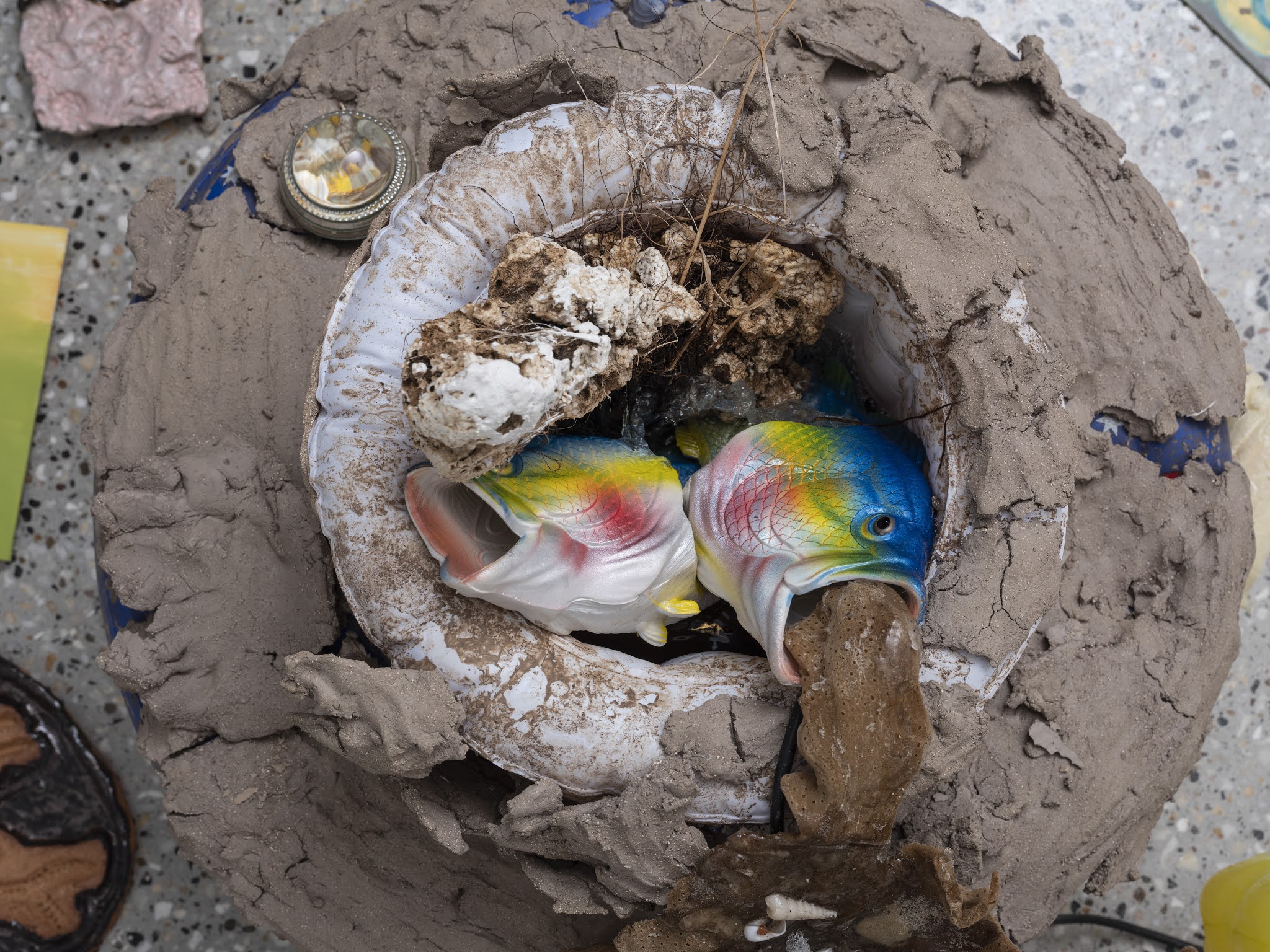 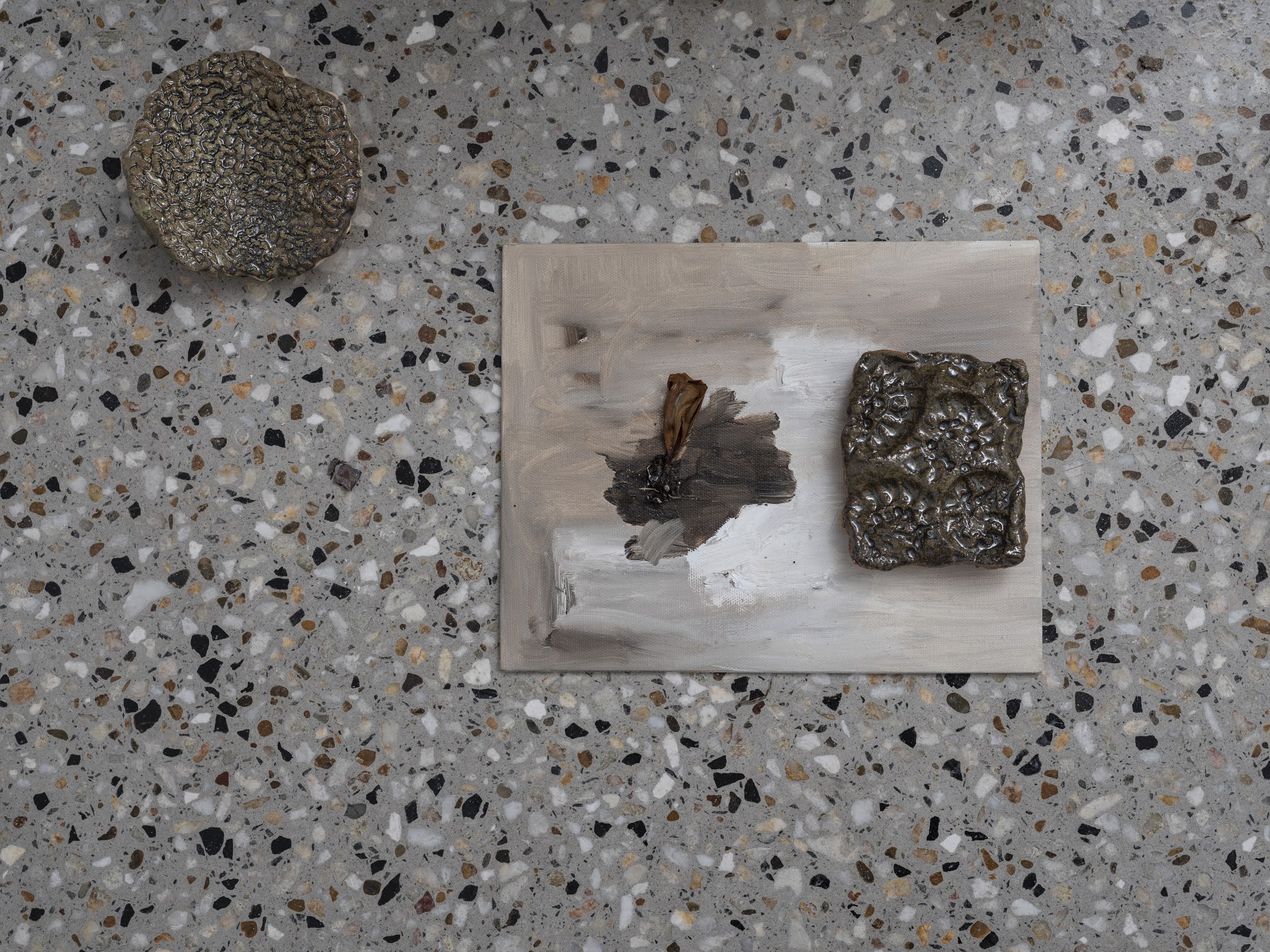 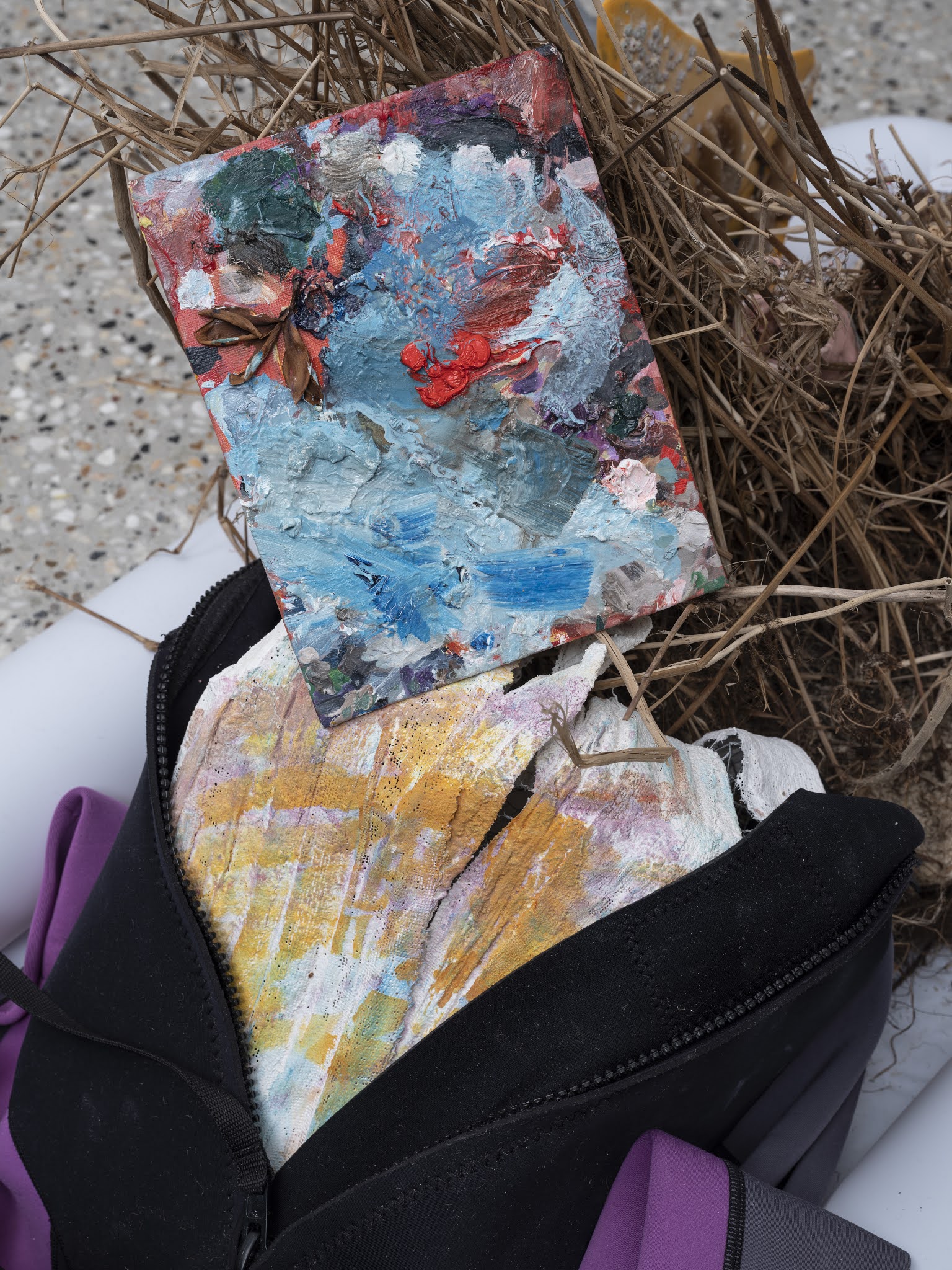 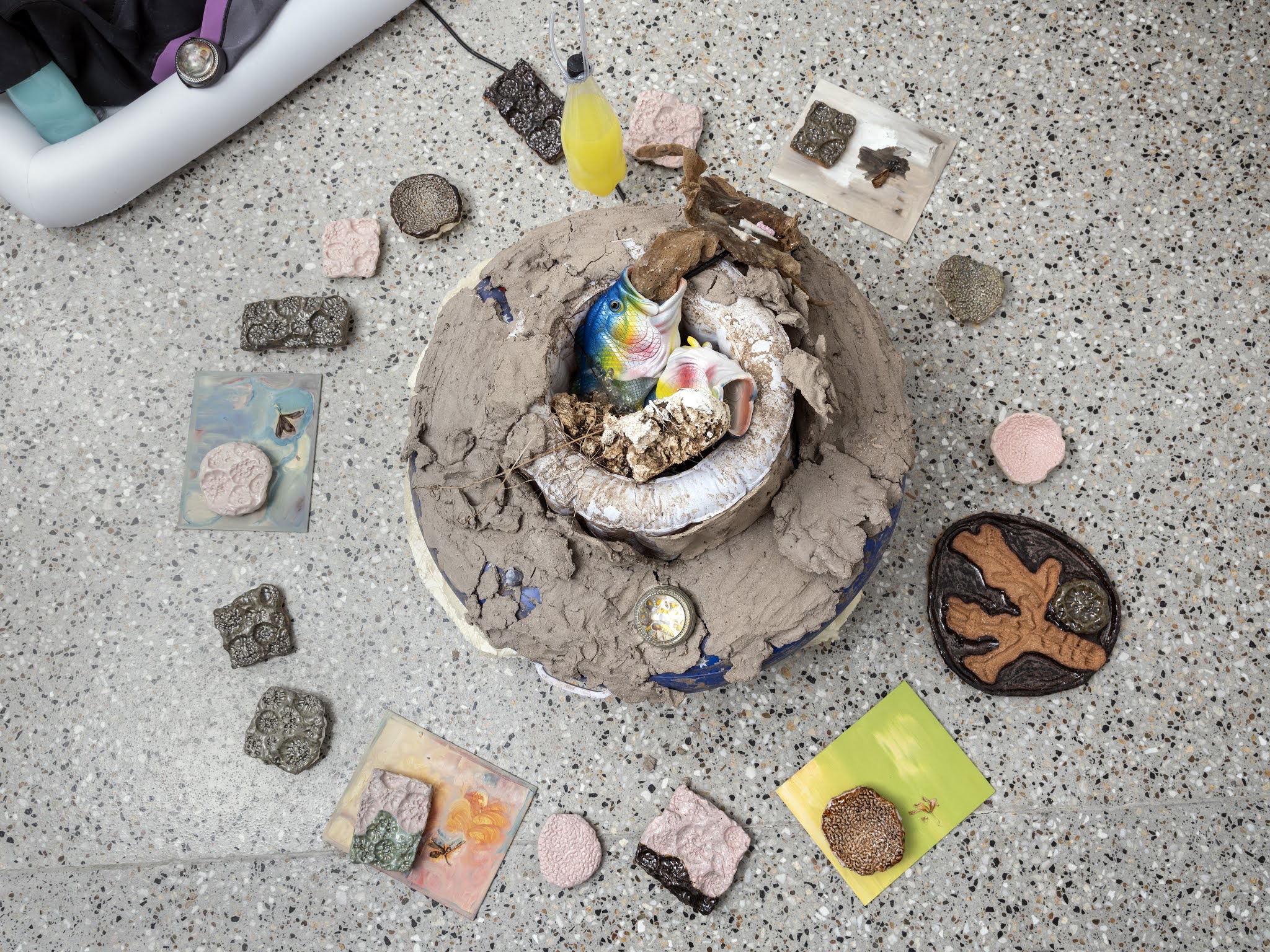 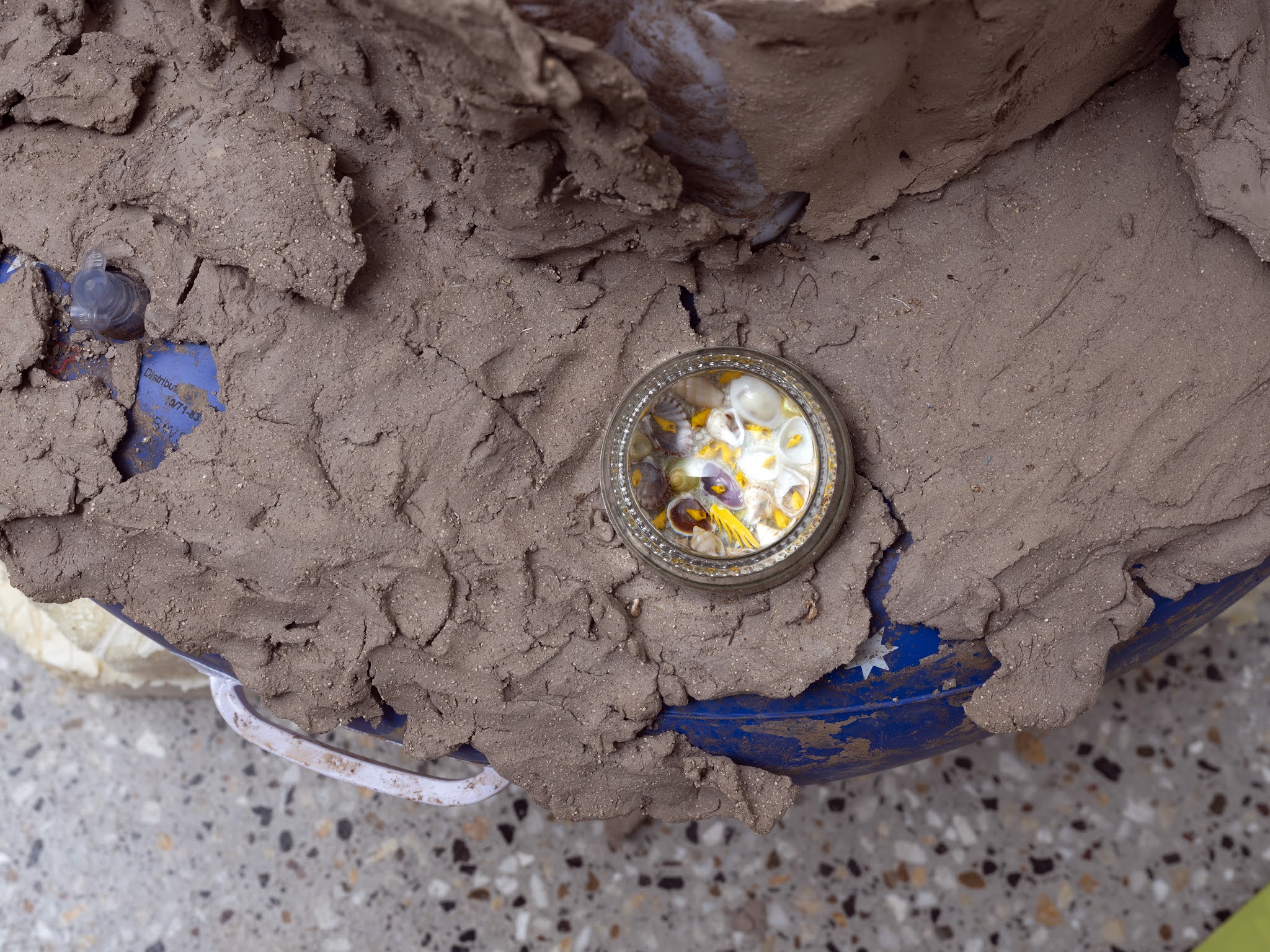 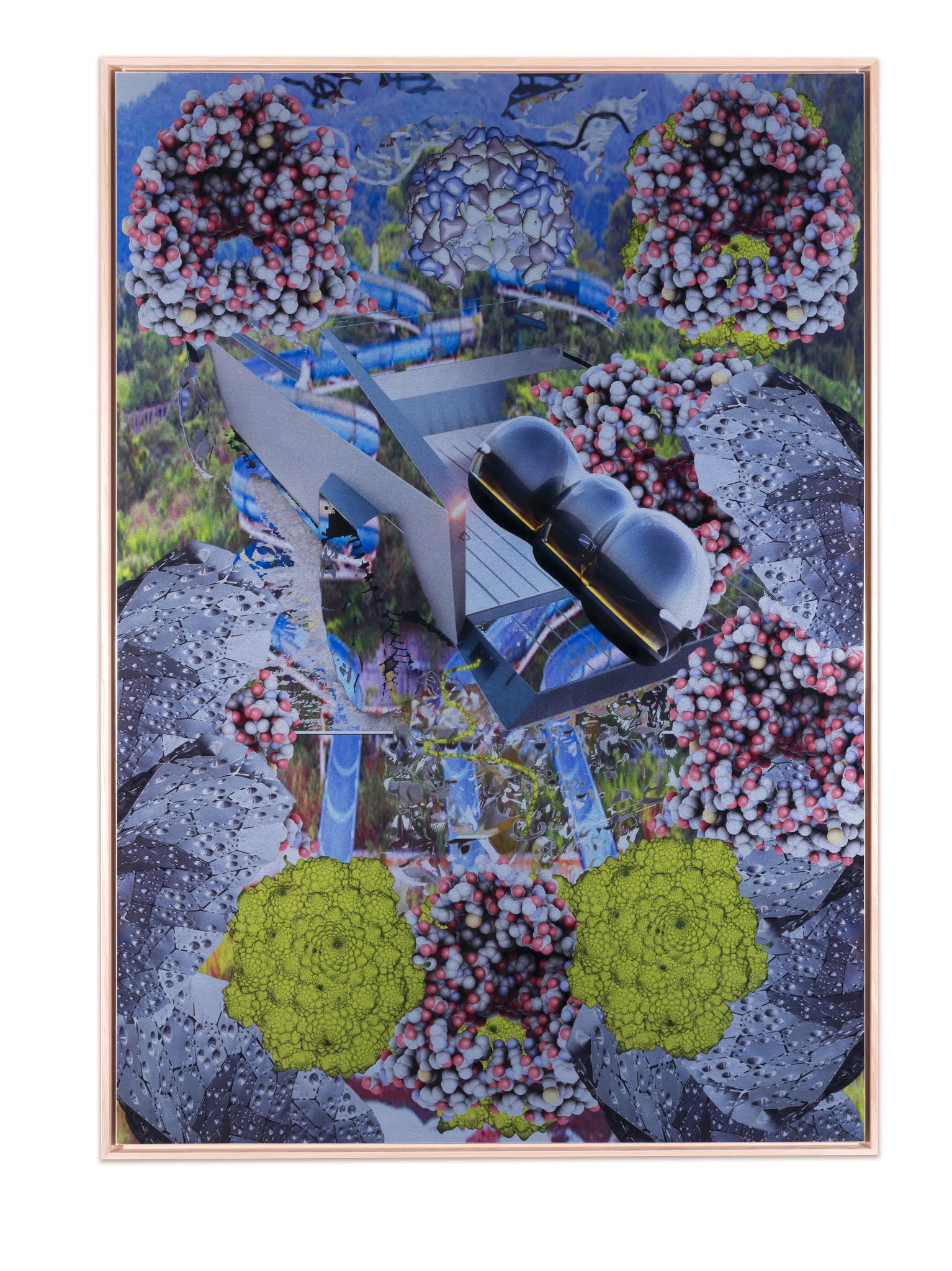 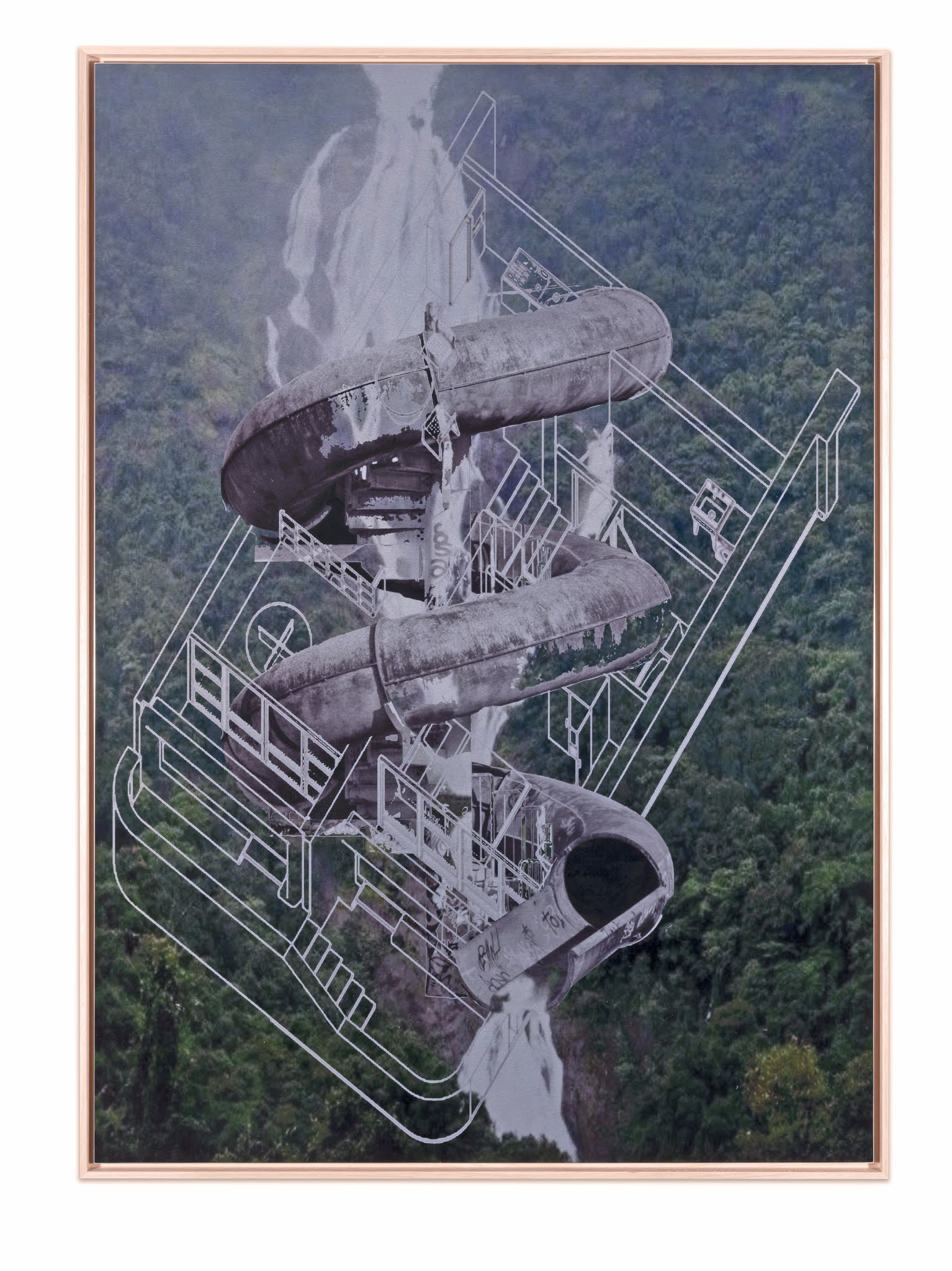 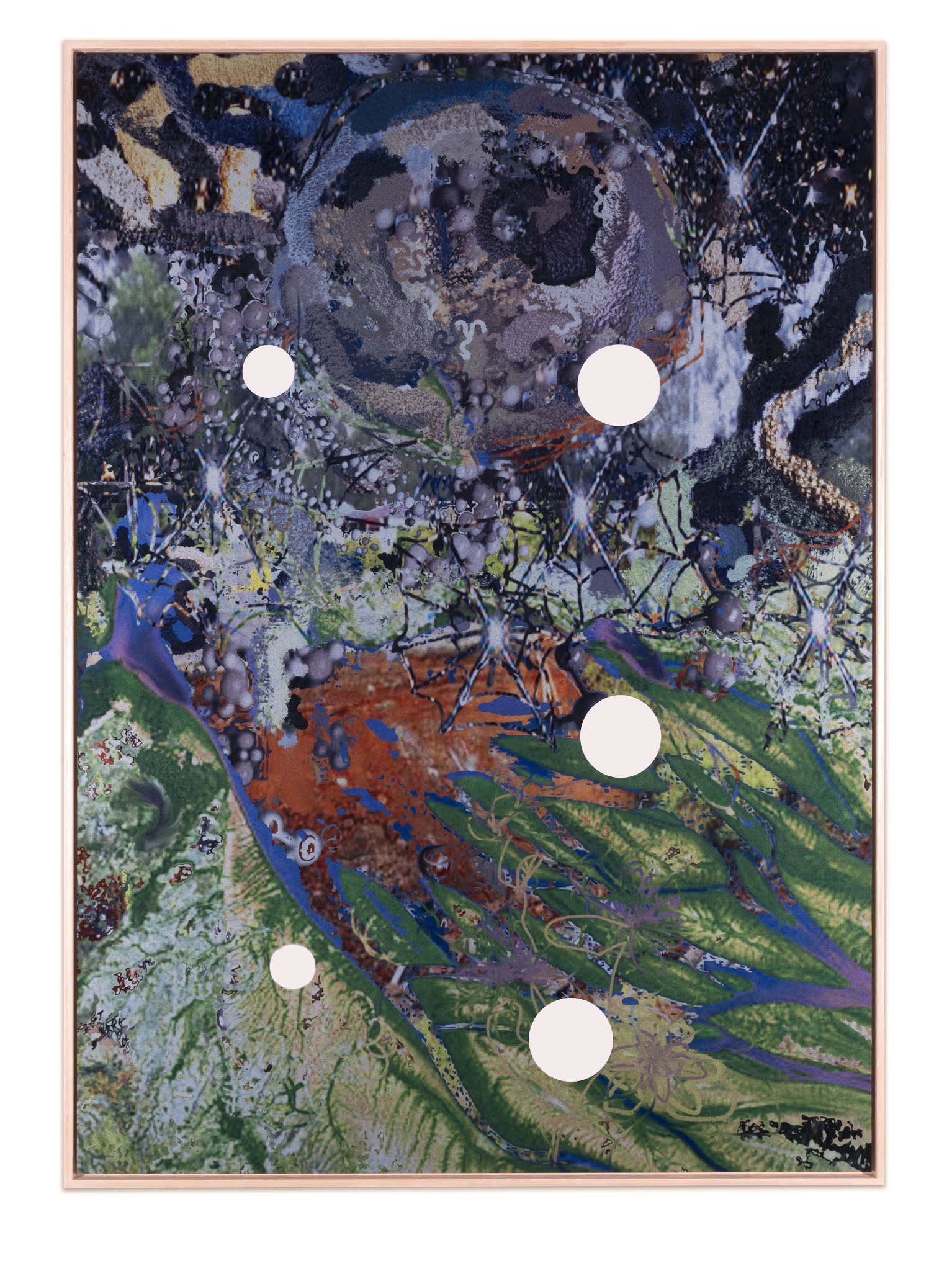 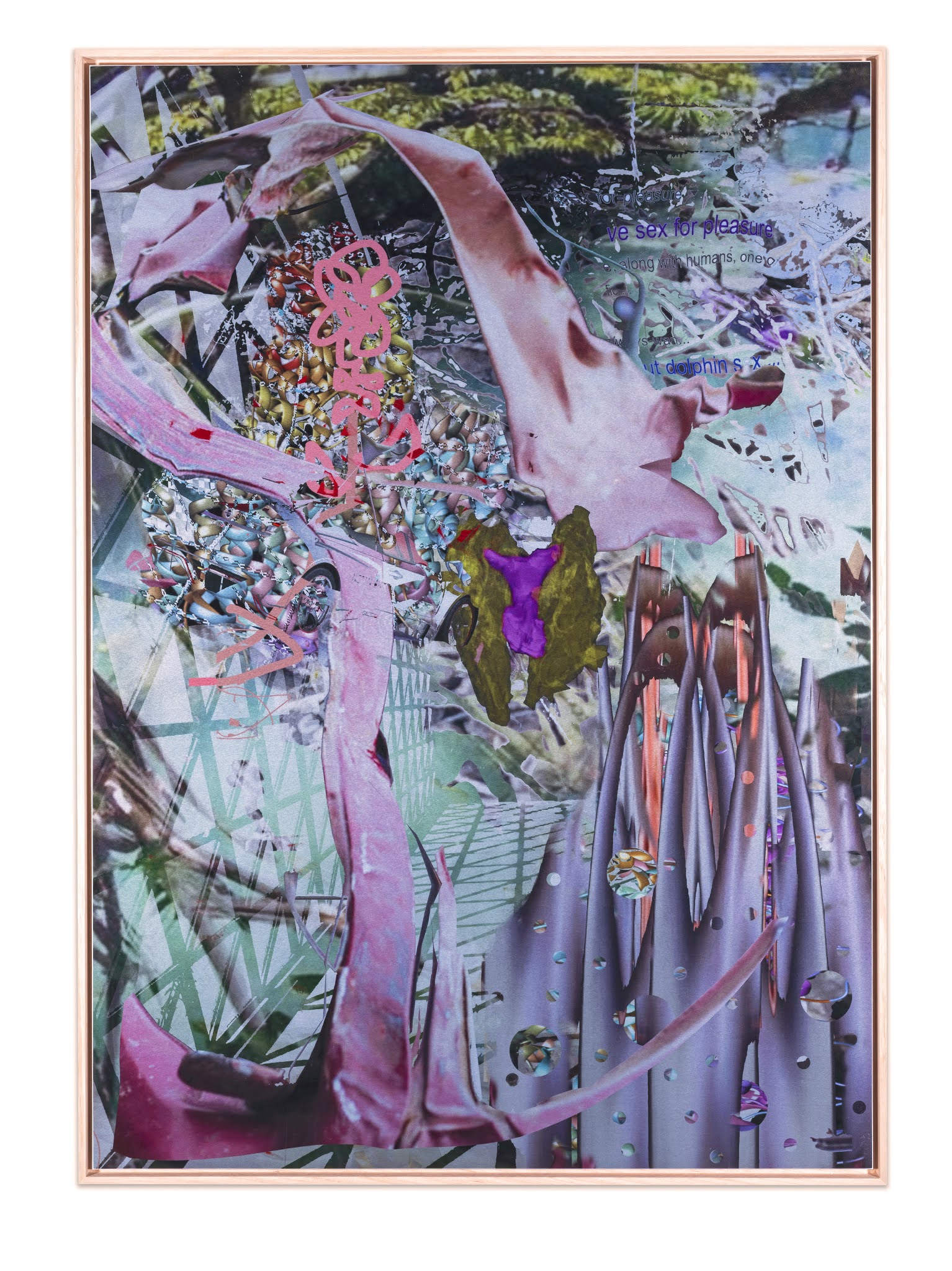 In the twenty-first century, everything exists simultaneously in an unending tumble cycle.(1)

The first time I encountered Marian Tubbs’s work, I wasn’t entirely sure what I was looking at. It felt both futuristic and familiar. The work in question, pure product on a healthy body (2018), comprised a series of fish tanks containing organic materials of indeterminate origin, connected by tubes and wires that fed into a centrifugal object. Was it some kind of fantastical filtration unit? Whatever it was, it didn’t seem functional but it certainly looked the part. The work was displayed on the parquet floor of an ornately paneled ballroom, its surroundings amplifying the disconnect I felt.

Tubbs uses poor materials, the physical and digital detritus of late-stage capitalism, to question ideas of value and to engage with economic, social, and ecological issues. The artist’s assemblage-focused practice brings together images, objects, and text in unexpected combinations that generate new potentialities. Often transgressing the boundaries of traditional media, Tubbs’s oeuvre defies easy characterization. This essay collects my observations about the multiplex nature of Tubbs’s work in order to make sense of her practice as a whole. A close reading of several key examples of her work is presented alongside a consideration of art historical precedents and references, as well as text fragments that articulate the social, economic, and political conditions that give rise to her work. In this way, the structure of my text is modeled on an assemblage, the foundational form of Tubbs’s practice.

My contention that all of Tubbs’s work—including paintings, sculpture, and digital media—is assemblage provides an organizing framework through which her practice can be understood. Further, Tubbs’s assemblages are defined by their poor materiality, their use of discarded objects and degraded images. In her assemblages, she grants new agency to things that are no longer valued for their original purpose. For the artist, thought arises from these diminished materials.

The process is concerned with not knowing, being the fool and learning through intuitions.(2)

Working with devalued materials also requires the artist to re-learn—or, more accurately perhaps, unlearn—the conventions and hierarchies taught at art school. As a result, Tubbs’s professional career as an educator and researcher informs her approach to subject matter. The sculptural assemblage anagram (2017) extends from Tubbs’s research into pelagic (open sea) garbage patches caused by pollution released into coastal areas and carried out to sea by gyres, or circular ocean currents. Images of these giant floating rubbish formations typically focus on plastic debris on the ocean surface, but they are mainly composed of microplastics circulating beneath the surface, invisible to the human eye; marine scientists describe their appearance as a “peppery soup.”(3) Constantly shifting with ocean and wind currents, these “trash vortexes” do untold damage to marine life before spitting rubbish back out onto shorelines around the globe.

Undertaking several months of fieldwork along international coastlines in 2016, Tubbs collected and documented plastic debris that washed up on the shore. The abstract forms of the resulting works, including anagram, are determined to a large extent by the materials they contain. As with other sculptural works by the artist, it is hard to make sense of anagram upon initial viewing. Recognizable items, including a small plastic ball and frayed fishing line resembling cotton candy, are encased within a thin layer of silicone littered with plastic particles. Silicone is a base material in many of Tubbs’s sculptural works, binding unrelated elements into new composite forms. She often scatters these objects on the floor as part of larger installations, an acknowledgement of the quotidian origins of the materials that catalyze her practice.

The street or, in anagram’s instance, the beach is the primary source of the poor materials in Tubbs’s works. Public space has become a convenient dumping ground for the unwanted byproducts of our consumerist culture. When I originally queried the artist about the specific media of pure product on a healthy body, for instance, her response was vague; I later discovered that the artist literally salvaged the fish tanks and other elements from the streets surrounding the gallery prior to installation. The individual components of her work, that is, what they were before, are not as important as what they become when Tubbs brings them together. In her hands, they gain new utility and value.

Formally, anagram is soft and mutable; it can be displayed either on a wall or a horizontal surface. anagram references both the fluid shapes of oceanic garbage patches and significant examples of twentieth-century feminist art. In particular, Tubbs’s approach to materials evokes Eva Hesse’s experimentation with unstable and toxic resins in her sculptural works of the 1960s, as well as the performative latex pours Lynda Benglis began making in the late 1960s and early 1970s. Unlike these artistic forebears, however, Tubbs foregoes unconventional raw materials and instead reworks pre-existing objects that have been denigrated or discarded.

The inherent fragility of anagram reflects a contingency that defines much of the artist’s sculptural output. Due to the assemblage’s poor materiality, the artist anticipates that it will deteriorate over time until it has to be reconfigured or remade—at which point it will become something else. Tubbs’s work, moreover, does not strive for mimesis or to represent the real; the artist has never visited a great ocean garbage patch in person. Her objects are of this world, even if they don’t always appear so. They are obscurant in that the viewer must actively engage to decode their contents, yet they are not designed to be impenetrable. Tubbs hopes viewers find pleasure in her objects but also a more equitable relationship to the poor materials that comprise them:

I want them to be discrete objects with privacy, value and poetic minor agency.(4)

To my mind, few artists have negotiated the internet and attendant issues of privacy as effectively as Tubbs. In an era in which we sign our privacy away with the click of a button—handing personal data over to companies that sell it onto other companies that in turn use it to sell us more stuff—how can artists critically engage with the internet as a material in their practice? The title of this essay, and the book as a whole, is a fragment of a conversation between the artist and a friend about another friend, a former artist, who had taken a new job as a “privacy guy,” managing internet security for a tech company in Silicon Valley. “We need privacy guys here too,” her friend replied, suggesting that online security is a concern not just for tech entrepreneurs, but also for everyday internet users in Australia and around the world. The artist notes that the gendered nature of the term “privacy guy” made it sound more like an official title to her.

Tubbs draws equivalence between the discarded materials she scavenges on the street and the ripped images and footage she pulls from the internet for her digital assemblages. The eleven-minute video essay Nervous systems (2019), for instance, begins with computer-generated imagery of spawning coral accompanied by text describing the marine invertebrate’s reproductive cycle, set to a DIY porn soundtrack complete with squeaking bed frame and a sample from a Missy Elliot song.(5) The video interweaves the story of an image purportedly depicting the Great Barrier Reef from the French Surrealist André Breton’s 1937 book Amour Fou (Bad Love), though the image was in fact originally published in the New York Times and depicts a reef off the Bahamas, not Australia. Tubbs includes this historical narrative to foreshadow the digital proliferation of images that makes Nervous systems possible. The video questions the authenticity of images, an approach reinforced by its highly artificial rendering of undersea life.

As the video’s fragmented narrative unfolds, further linkages are established. The focus shifts from the life cycle of coral to consider its intersections with human social and economic activity: the history of coral mining in Queensland’s Moreton Bay, coral’s commodity status as a sought-after material for jewelry, and Pantone’s selection of “living coral” as their 2019 color of the year. Material flow, a term originally developed to describe the complexity of industrial supply chains, resonates with Tubbs’s approach to art-making—particularly the transformational potential of poor materials and the infinite ways in which images, objects, and text can be brought together to create something new. The flow of materials that unfolds over the duration of Nervous systems also characterizes her broader practice, in which real and virtual become one and the same.

Tubbs’s digital assemblages also manifest in physical works. I am series of chemical changes (2017) is a digital painting on silk from a series that followed under striates (2014–15). The earlier series comprises three long banners, the form and aesthetic of which suggest the endless scroll of online searches and the accumulative effect of having fifteen browser tabs open at once. For the 2017 series, Tubbs used imaging software to compose a series of static tableaux made from virtual materials. Like Nervous Systems and other videos by the artist, I am series of chemical changes features computer-generated imagery of crystalline forms and cellular structures, another iteration of material flow. The composition features filtered photographs and screenshots of text fragments, including a to-do list from the artist’s smartphone. The work is therefore self-reflexive: it is an artwork about the making of an artwork. But it is also grounded in the real world, incorporating images and text from Tubbs’s daily life alongside—and including—traces of her online existence.

In looking at this work, I am reminded of the exploration of trash vortexes in anagram. I am series of chemical changes contains the “dead ends” of materials that Tubbs has subjected to further processes of manipulation, changing their meaning and value yet again. Like anagram, Tubbs’s silk works can be displayed in a multitude of ways; I’ve seen another work from the series draped over a balustrade in the artist’s home. There is an inherent tension between their debased imagery and delicate material substrate. The silk works also precipitated the development of Tubbs’s “fusion prints,” digital landscapes presented on robust aluminum that extend the merging of the real and the virtual initiated in I am series of chemical changes. As the work’s title suggests, nothing is fixed and everything is in continual flux.

Tubbs is an artist, of course, not a scientist or inventor. Her work serves no productive purpose except in its own right, as art. So what is the impact of this work? Can an artist effect change in a complex and fractured world? And how might artists reconcile the increasing tension between our online and lived experiences?

The reconquest of a degree of creative autonomy in one particular domain encourages conquests in other domains—the catalyst for a gradual reforging and renewal of humanity’s confidence in itself starting at the most miniscule level.(6)

Felix Guattari posits that without individual action, collective change is not possible. Tubbs initiates that small-scale action in her work, making something new from the rubbish that would otherwise fill our streets and hard drives. While her work does not function in a traditional sense, it opens up new ways of thinking about our place the world. Inhabiting the position of artist-as-futurist, Tubbs speculates about the new possibilities of poor materials; in doing so, she reveals how the real and virtual are increasingly indistinguishable. The artist’s work thus raises broader questions about our relationship to technology, questions that will become some of the defining concerns of years to come: How do we know what is real and what isn’t anymore? Is privacy even an option?

3. “Garbage Patches: How gyres take our trash out to sea,” episode 14, in NOAA Ocean Podcast, https://oceanservice.noaa.gov/podcast/mar18/nop14-ocean-garbage-patches.html.

5. Nervous systems features reoccurring instrumental sampling from Missy Elliott’s “Throw it back” (2019): https://www.youtube.com/watch?v=9rOKdATrV4g. The squeaky bed was the most utilized sample in hip hop during 2019.