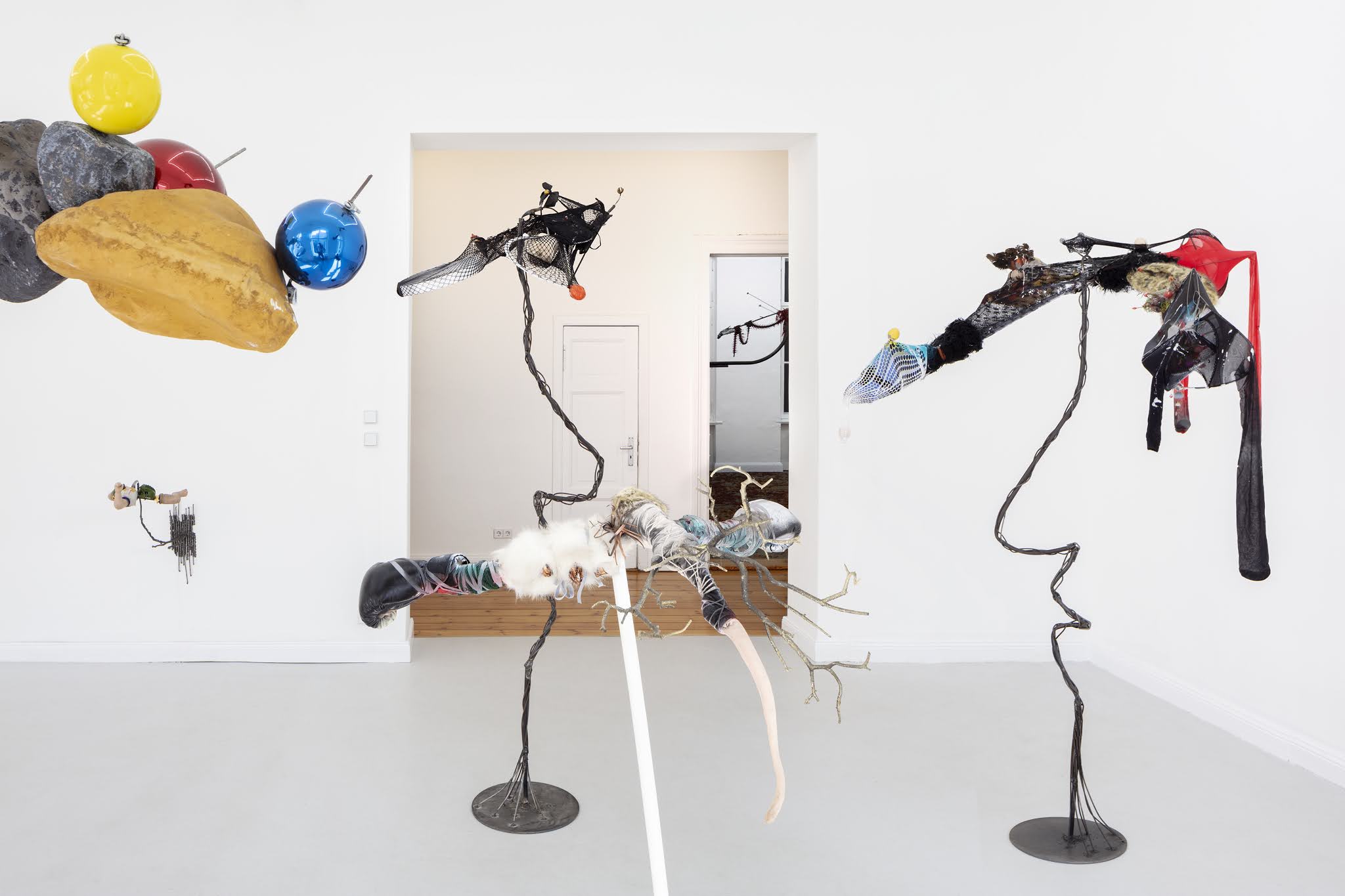 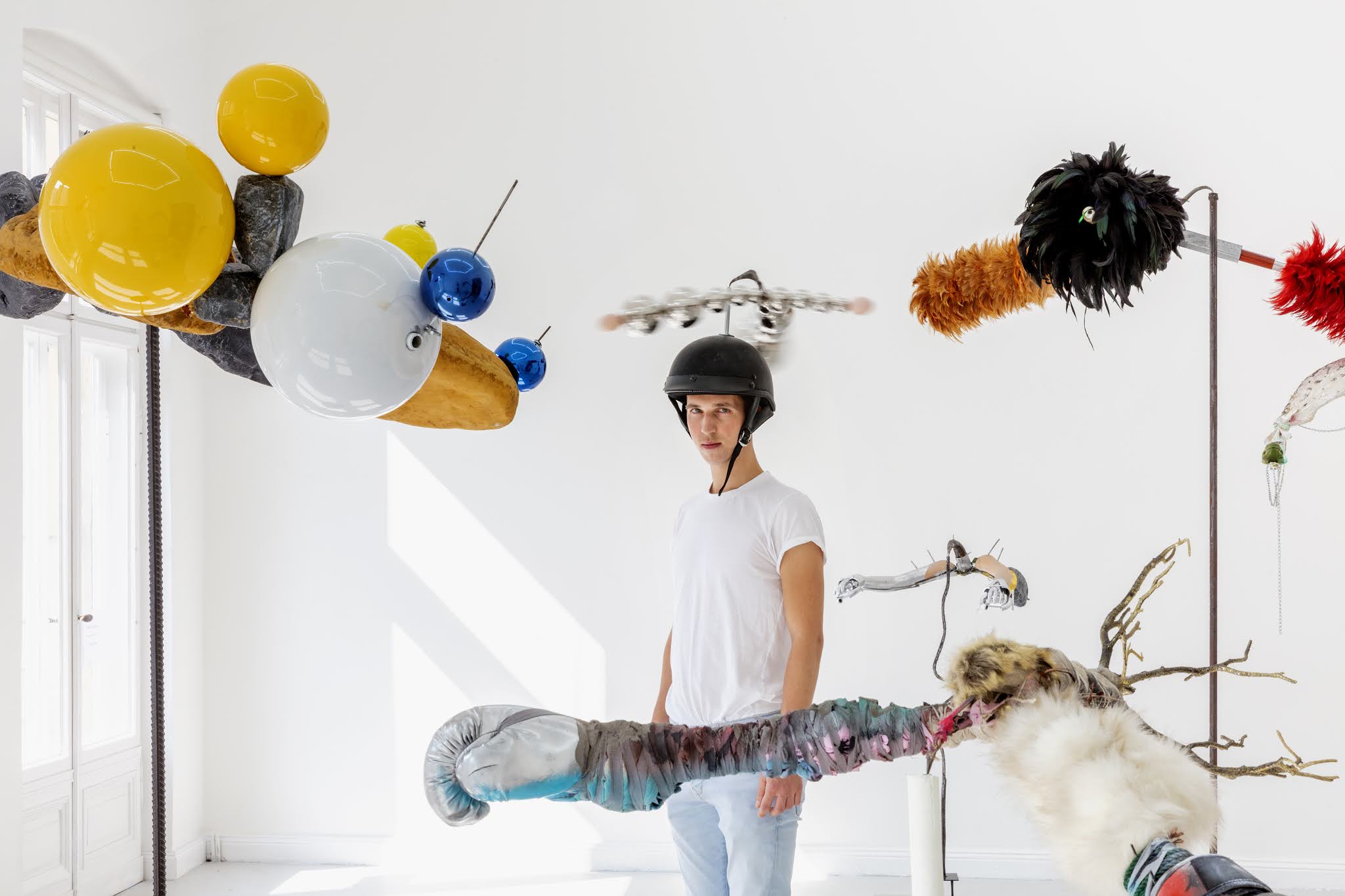 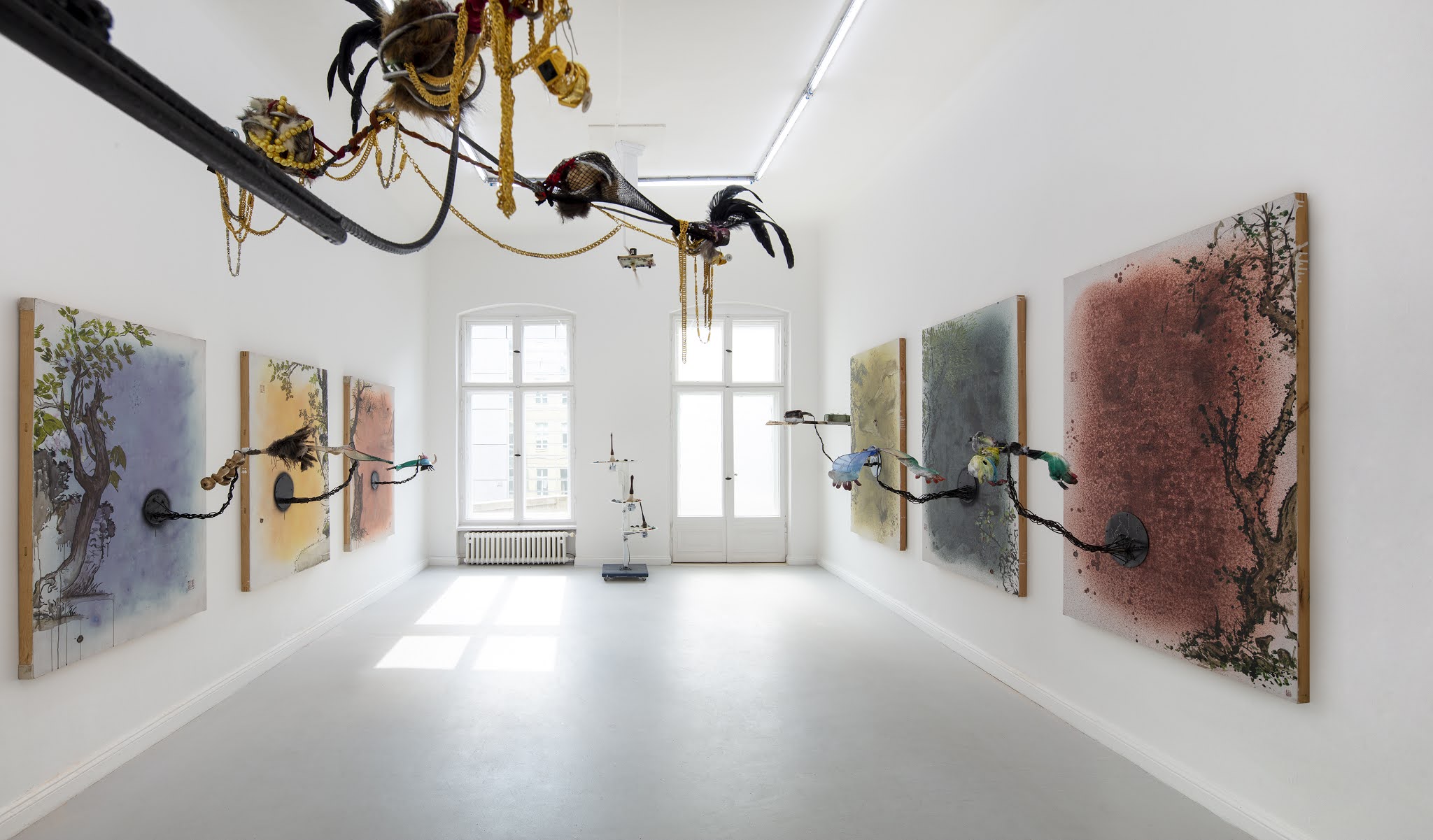 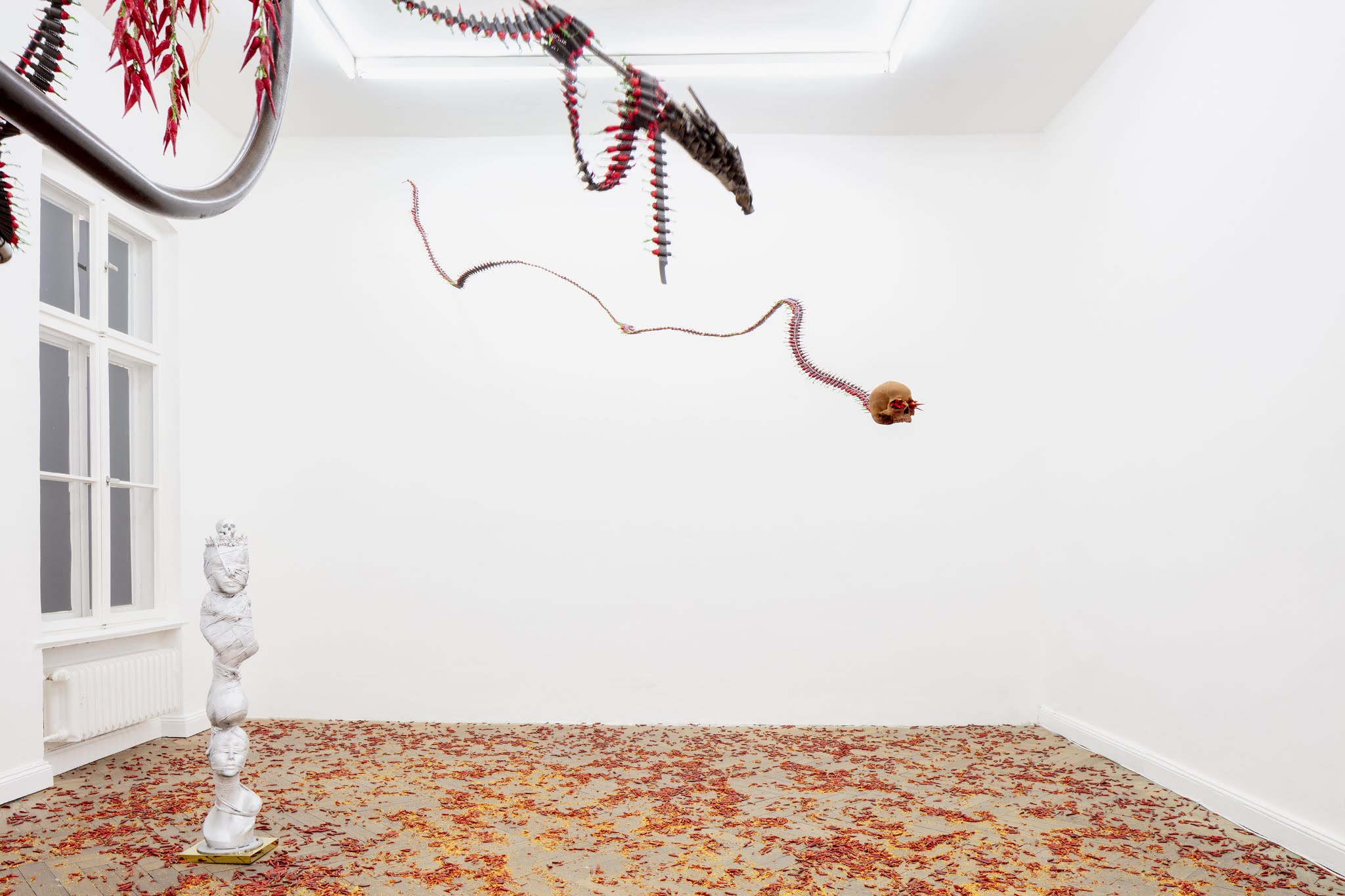 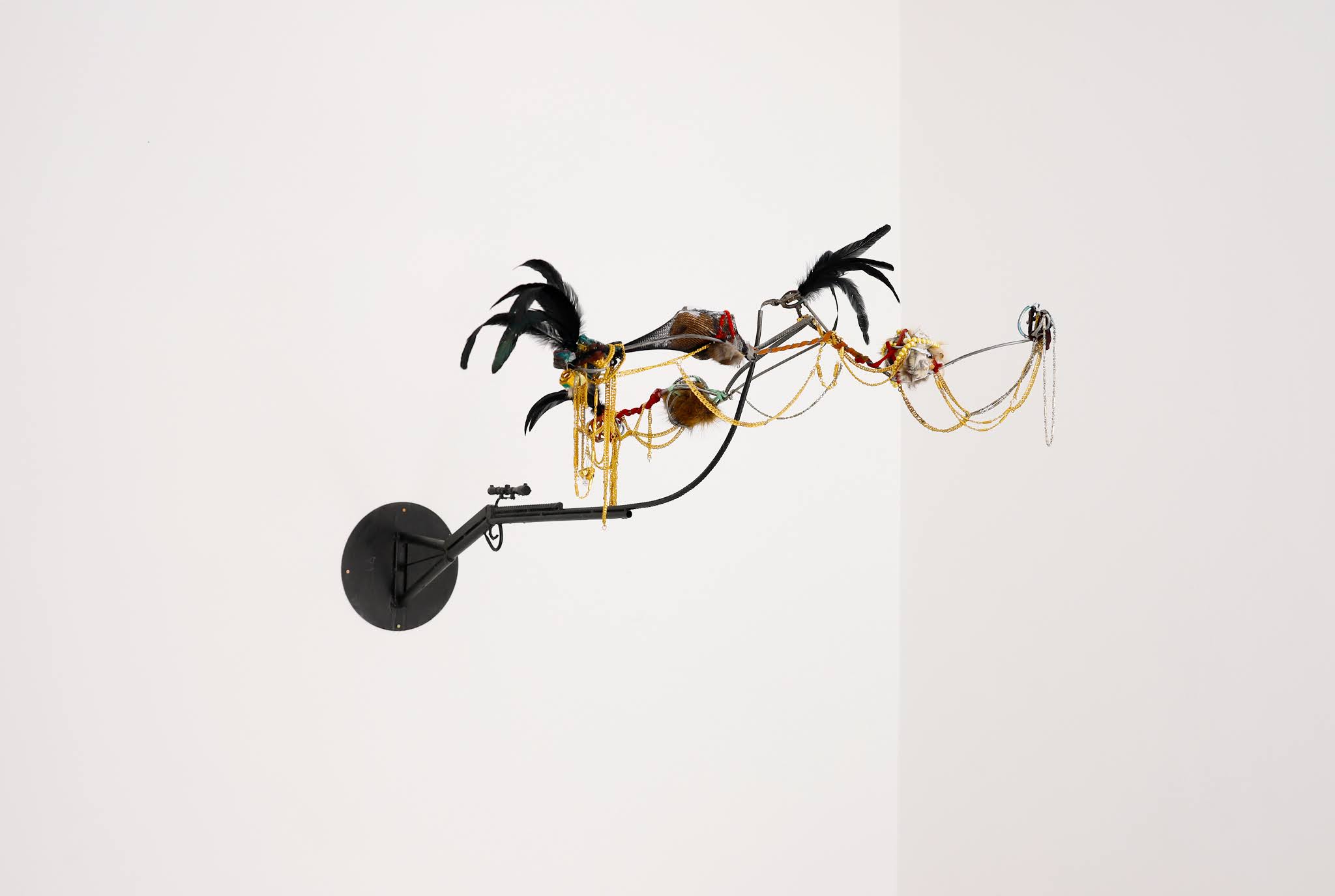 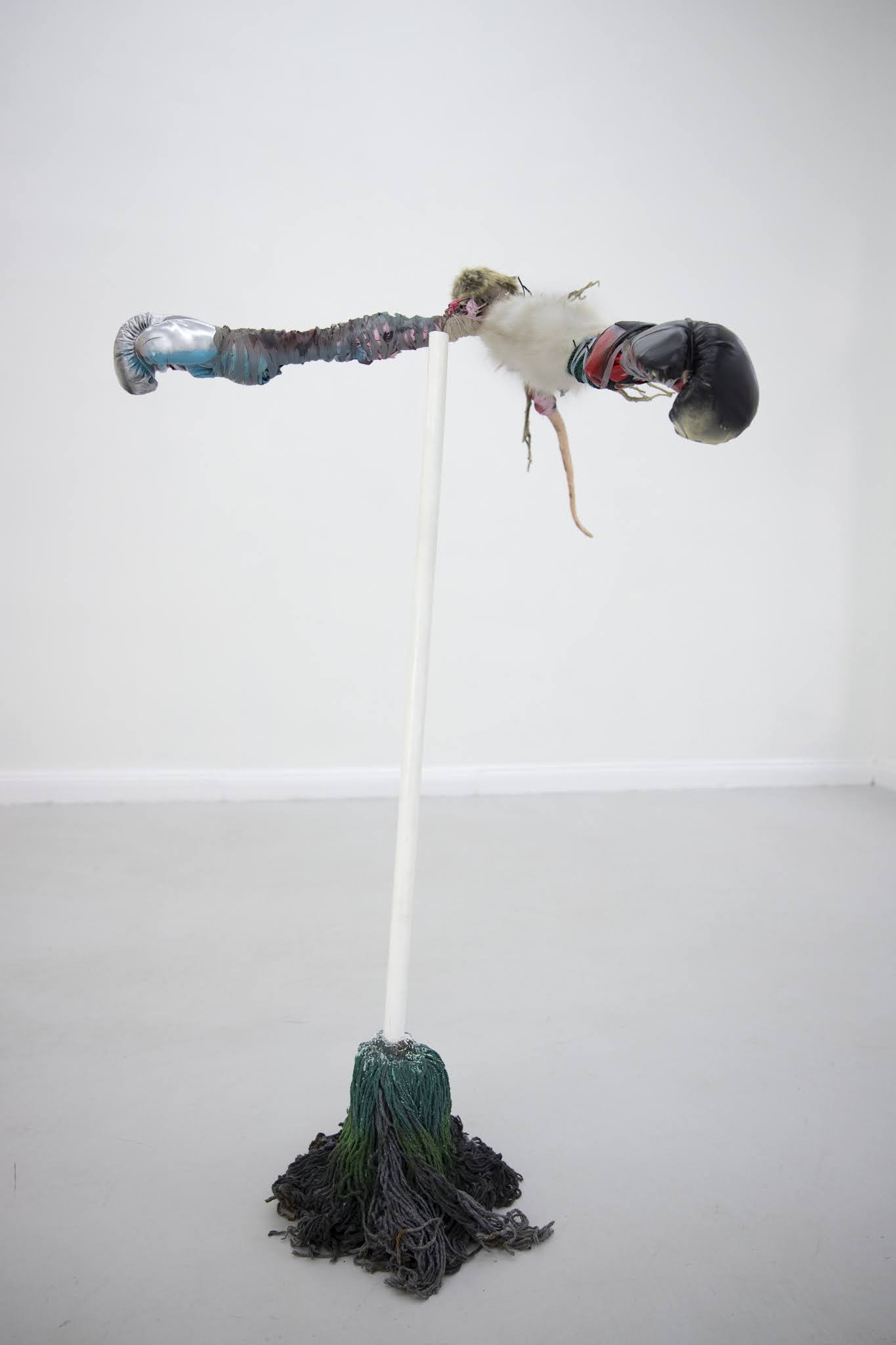 Tong Kunniao is concerned with the multitude of social structures that confine the individual subject to his place in society. Delimiting a space for outsiders, the title of his current exhibition Just Stay In The Cold refers to the Chinese phrase “哪凉快，哪呆着 去” (literally “go where it’s cool”), or “go jump in the lake.” In Kunniao’s application of the term, this timeless Chinese insult also functions as an absurdist prank. When considered alongside his fantastical sculptures, this phrase might conjure an image of the artist floating on a make-shift raft alone, accompanied by inanimate companions like a pair of mannequin legs, a bible, a wooden cross, and a toy frog, on the overly polluted lake near his home. This vision of Tong – himself a flâneur, poet, scavenger, bad boy, rebel, and ambivalent spectator, shows him constantly oscillating between an official role artist and his simultaneous stance as a resistor of confinement. He is a master of the “golden balance,” an idea that arose simultaneously in ancient Greece and ancient China. The balance found in his work is always precarious, as if a Calder became sick from sampling the dregs of over-production and late capitalism. His accumulations of disparate scavenged and purchased objects trigger the trauma of an unending supply of new products, almost all from China, being built to last forever. We already have come to regret these materials, plastics and synthetics whose waste only continues to pile up. His large scale installations are sprawling infinities—jam-packed, carnal carnivals, the debris of a bankrupt department store, a disaster film throwing us all into the madhouse.

The central works in the exhibition are from his ongoing series“Balancing Bird” or “Bird Infinity.” Referencing his empathic relation to the animal world, these paranoid self-portraits, encapsulate the havoc of everyday life within centrally-controlled China: individual mania or panic and the information overload—or more precisely the action of “teetering,” a term that refers to an constant hope for equilibrium in hopelessness. Teetering on the edge of destruction, these works structure a call and response, around the notions of Dasein [existence] and Geworfenheit [thrownness]. This concept was introduced by Martin Heidegger, who in his despair saw us all in a state of “thrownness” into the arbitrary and erratic aspects of our existence.

Each bird recalls an encounter with another, in one for example a memory of the street sweeper, one central work in the exhibition titled “Mop Boxer” recalls the other and the self simultaneously. Observing a humble street sweeper in his home of Beijing, Tong projects the possibility onto the strong physique of this stranger, he is forever confined to his duty as a cleaner but he could have been a prize fighter. One senses Tong in all these balancing birds, they are self-portraits of him as a flâneur of contemporary China. Unlike 19th century France, his wandering does not derive from the luxury of time and urban affluence as “a man of leisure,” rather he is given a duty to roam but only as far as he is allowed, in essence he is confined to a single place in society which is the punctum or point on which the beaks of the birds balance. Firmly ensconced within the post-medium condition, Tong’s work extends beyond formal boundaries to encompass sculpture, performance, painting, photography, and poetry – sometimes even within the parameters of a single work.

Tong Kunniao makes use of products of our throwaway society referring to the modernist mode of the bricoleur, working with whatever is at hand. For him, the endless supply of objects that end up in resale shops, flea markets, and dumpsters form a substructure for the semiotics of the built world. He describes this seemingly limitless flow of consumer goods as a “bad infinity” not only a capitalist garbage bucket but also the liminal state of Chinese economic “'reform and opening-up' that started in 1978. His role is as a scatological scavenger who performatively explores the depths of to both “annihilate, illuminate” for him it is always both/and. In his sensual and obstinate objects we associatively experience the special traces and stories found or imagined in his scavenged materials—and what they reveal about a city and its people. Equipment and small machines brought from China serve as a framework for the new mixed media works. In the interplay of kinetic experiment, contemporary Wunderkammer (Cabinet of curiosities) and installation art, Tong creates a re-enchantment of our material world and challenges the viewer to rethink our consumption-driven value system in a playful way, and thus a very strong destructive imperative but also reconstructive.

A second trope running through the exhibition is that of the common man, or everyday outlaw, an archetype that for the artist is embodied by his father, who passed away last year, and was a common supporter of the Communist party and accused (perhaps wrongfully) of bearing weapons. He spent ten years in prison as a labeled criminal during the cultural revolution, a family trauma that has had lasting impact over the generations. A trauma of the Lacanian “real” that has been trapped in his memories. Along with the balancing birds, the recurring motif of weaponry, particularly his father’s rifles. Here, the artist bends the rifle barrel up, castrating it into impotence, becoming a holder of the bird at its tip: a self-portrait of the artist himself. These works are simultaneously memorials to his father and what he calls “healing machines.”

The two parts of Tong Kunniao’s exhibition each foreground the fragility of equilibrium, playing upon the precarity of categorical distinctions related to value, use, and destruction as well as the myriad balancing acts that we encounter in our daily lives: finding balance within the self, within one's community, and with the other. As the artist himself notes, “the play of human existence revolves around the possibility of being thrown in the world, of being abandoned. We are ‘thrown’ into the world, and we have to deal with what is thrown at us. “ Following this motto, the second chapter of the exhibition functions as a reconfiguration and expansion of the works and concepts introduced in the first chapter—highlighting the elemental instability of life in a rapidly changing world.

Tong Kunniao completed his Bachelor of Fine Arts at the Sculpture Institute of the China Central Academy of Fine Arts (CAFA). Since then he has had exhibitions in museums like the Yuz Museum, Shanghai, the PowerLong Museum, Shanghai or Platform China Contemporary Art Institute, Peking. Tong lives and works in Beijing.