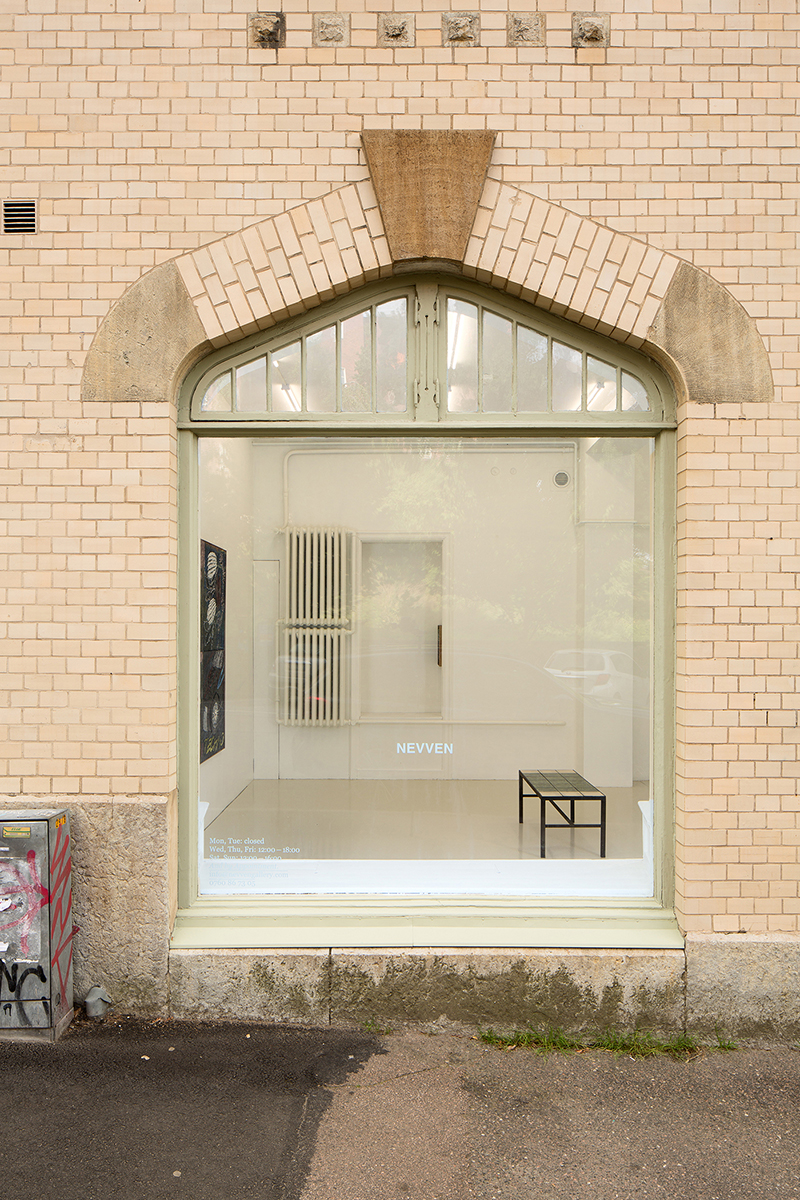 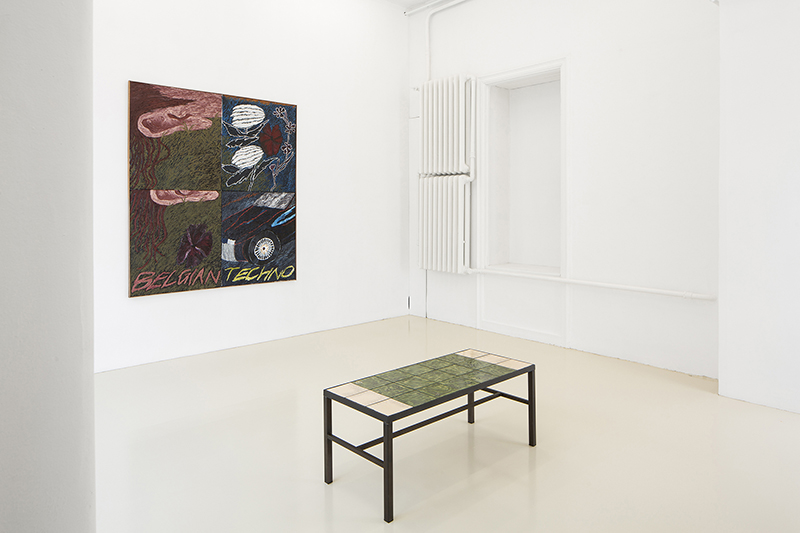 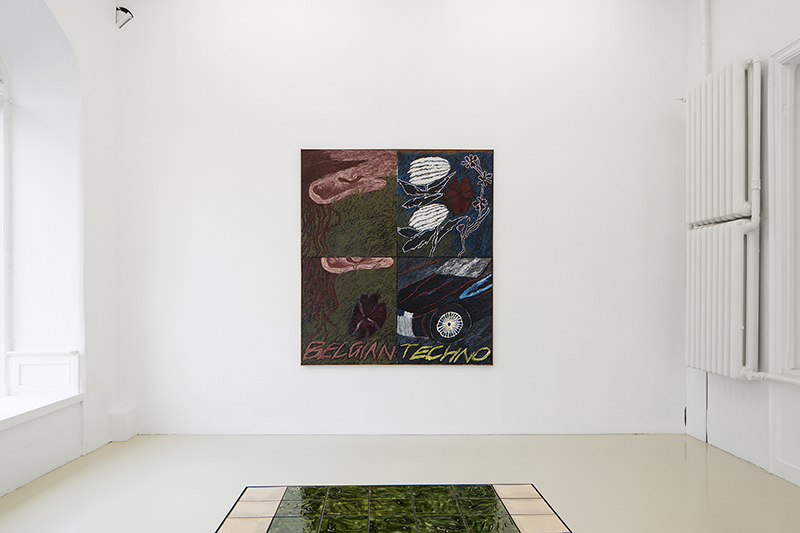 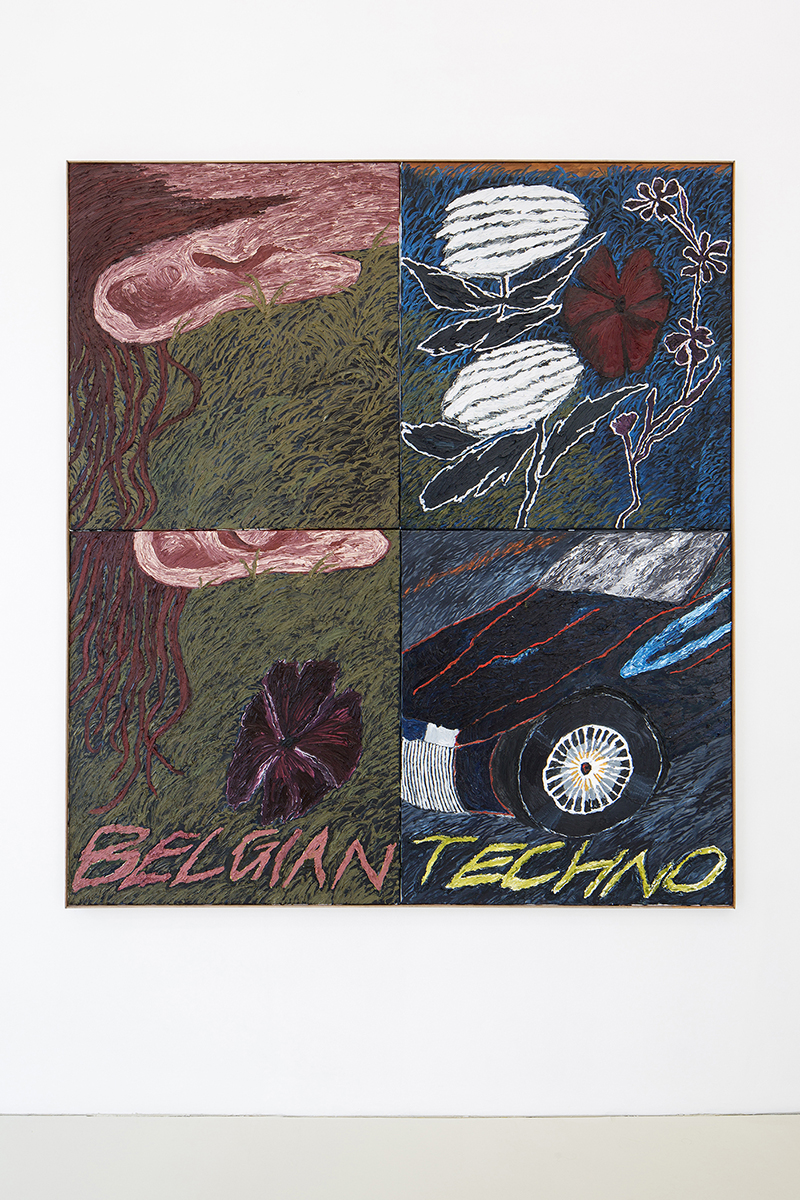 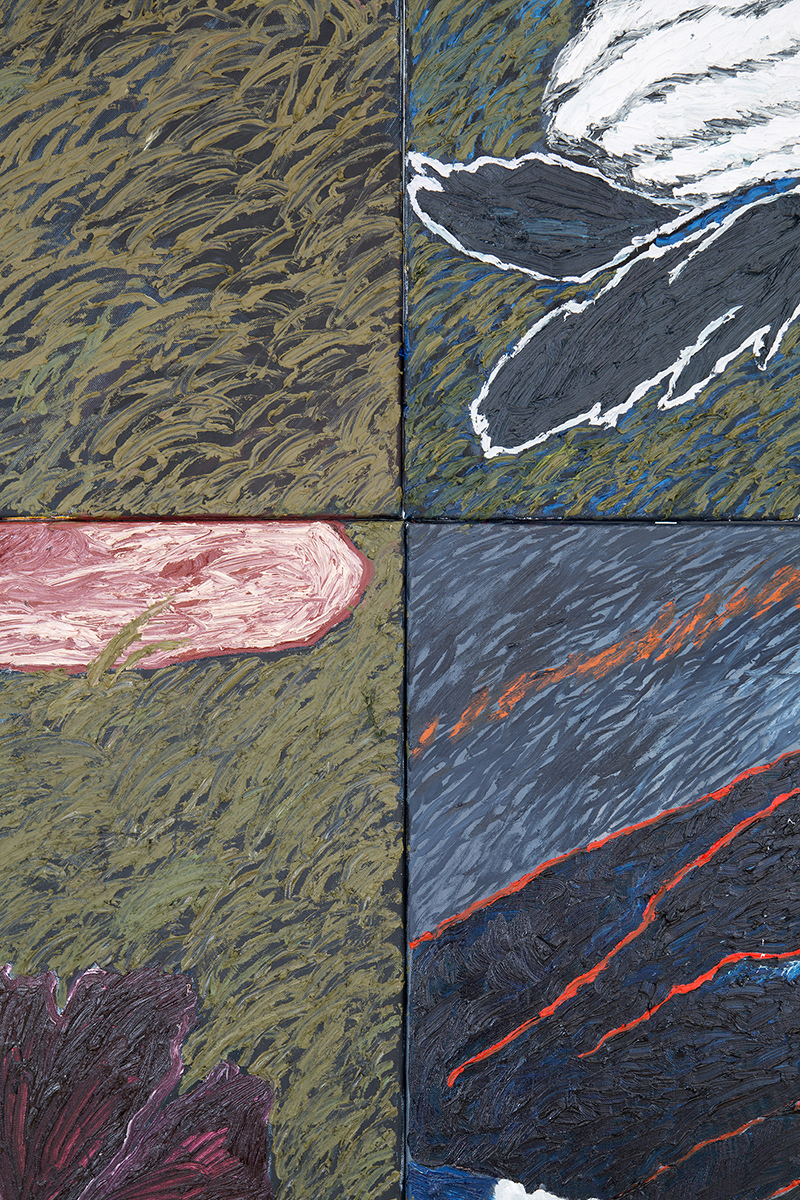 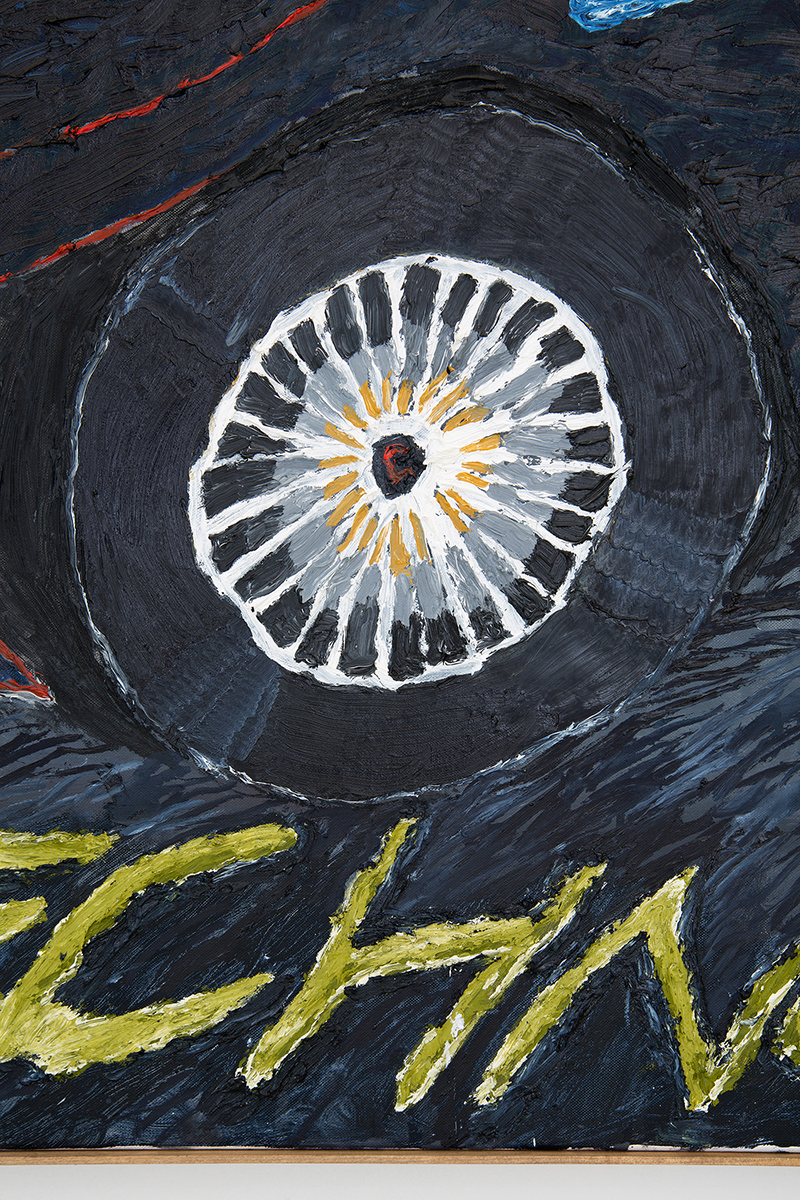 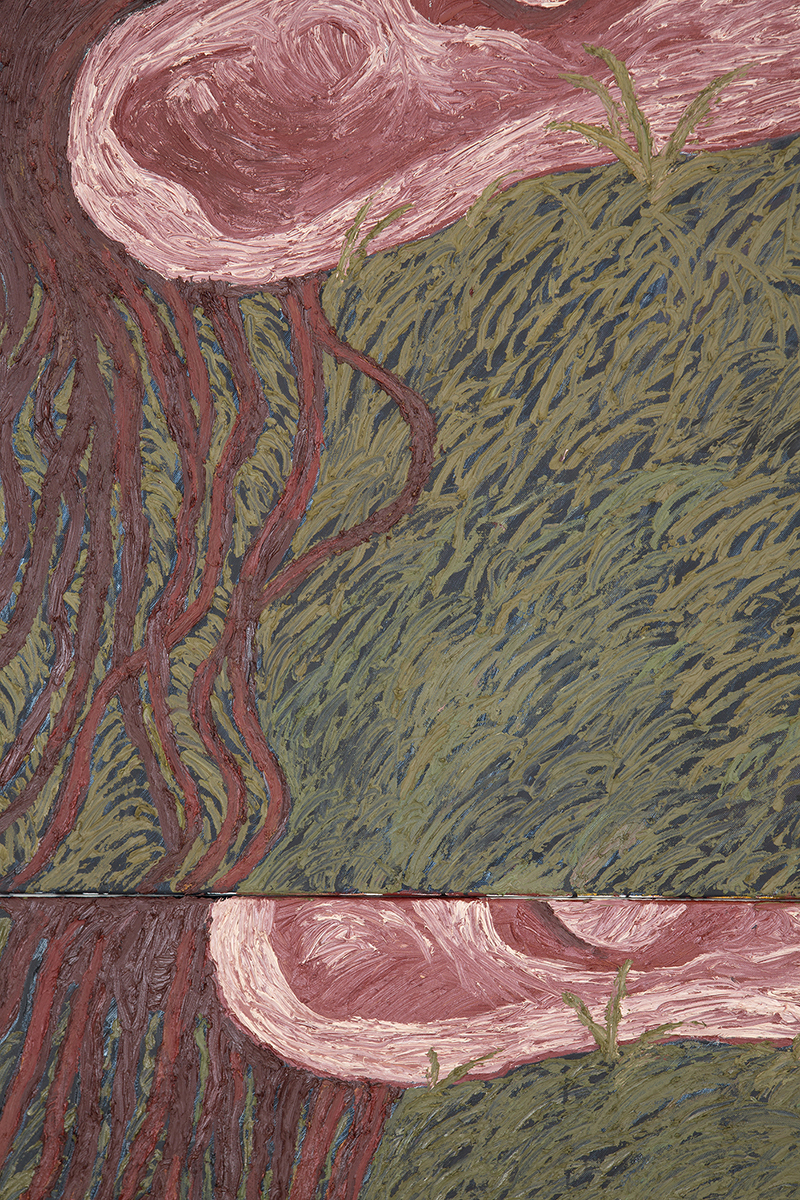 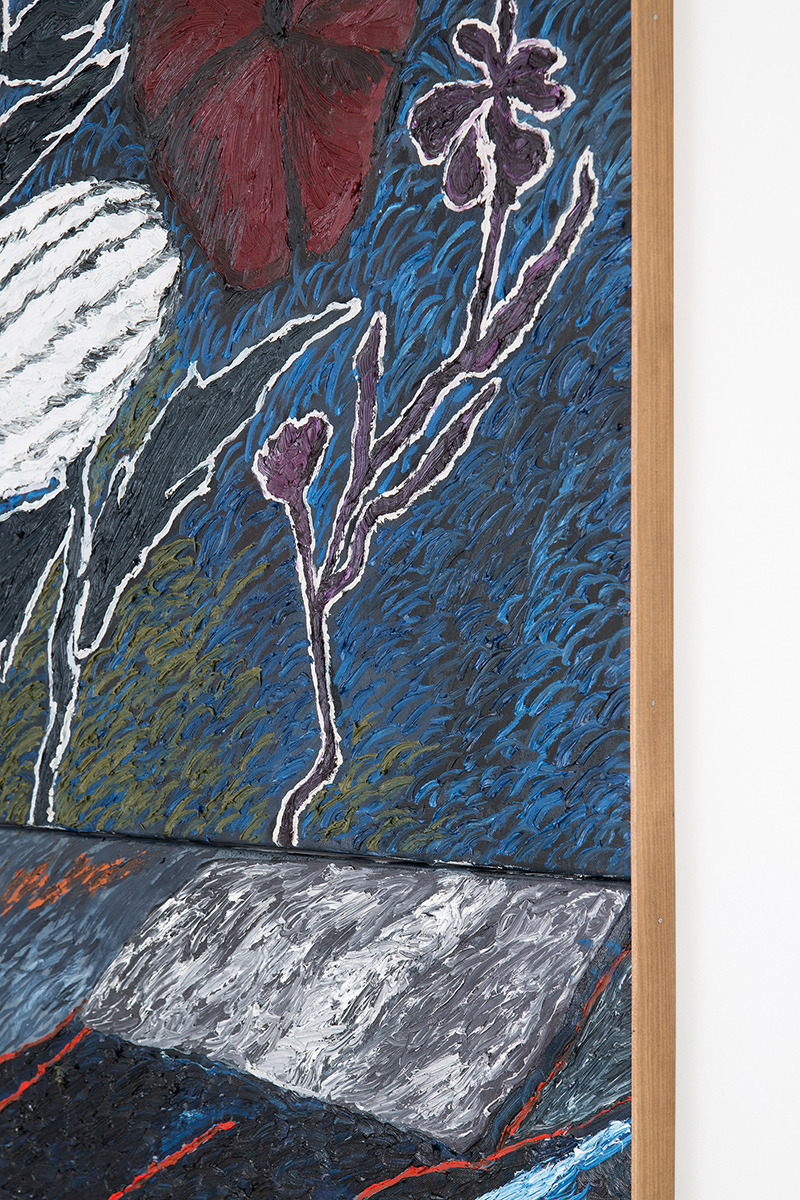 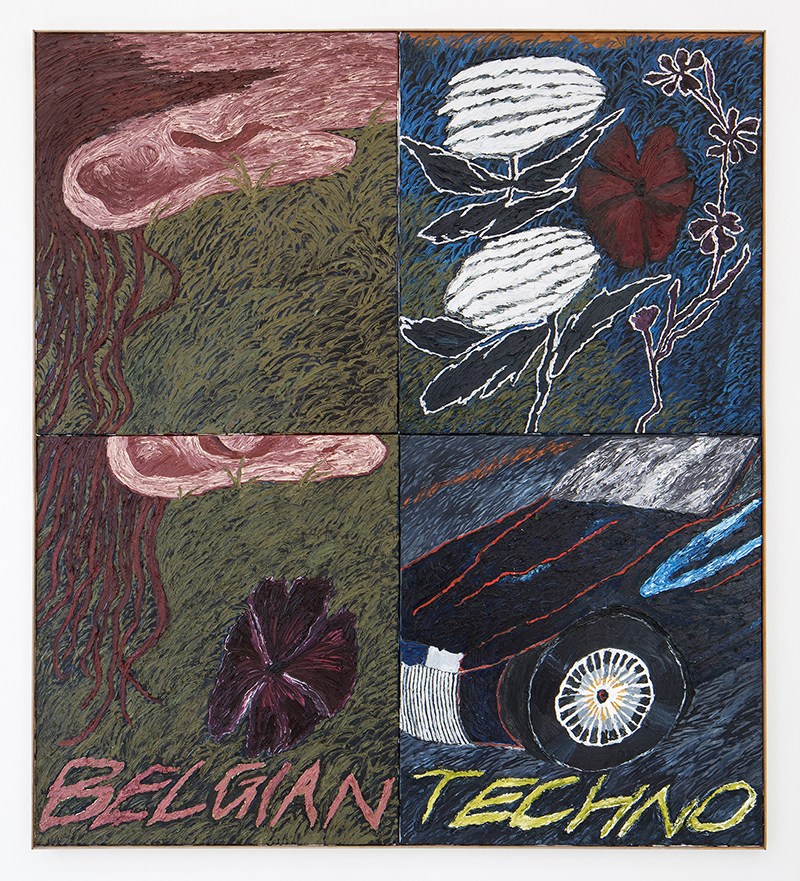 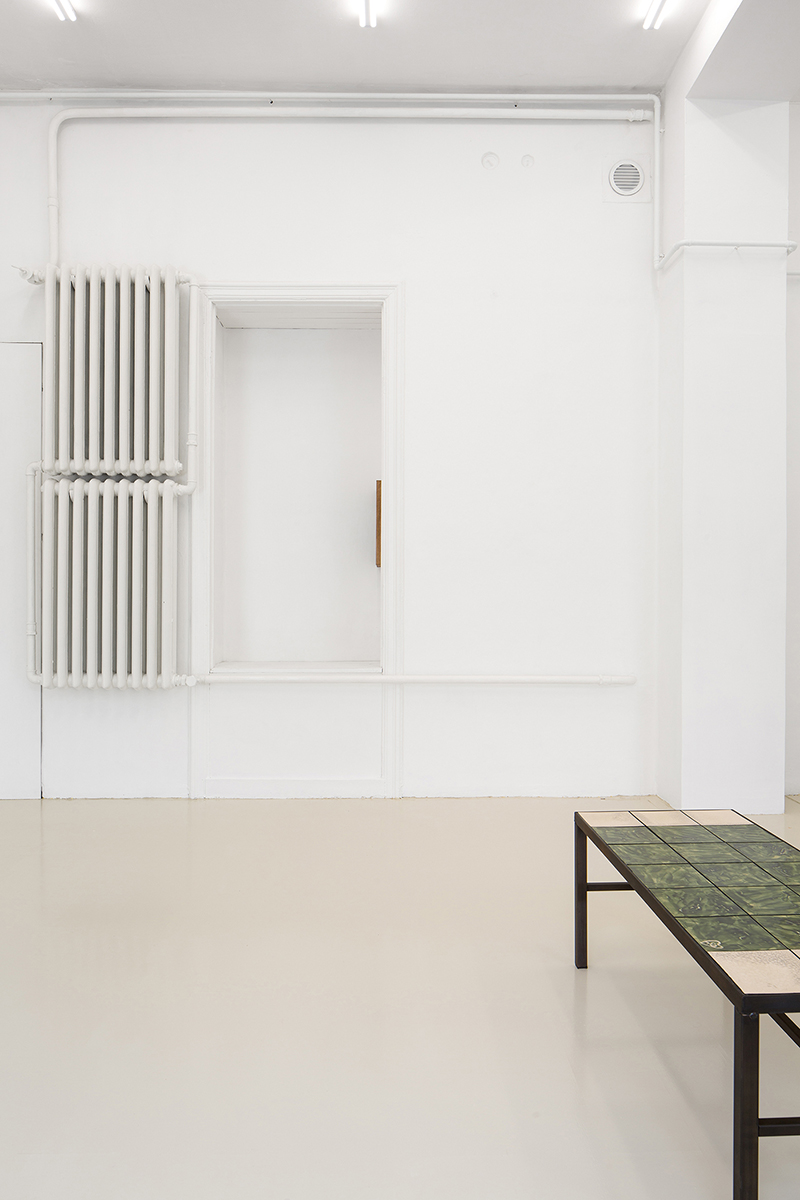 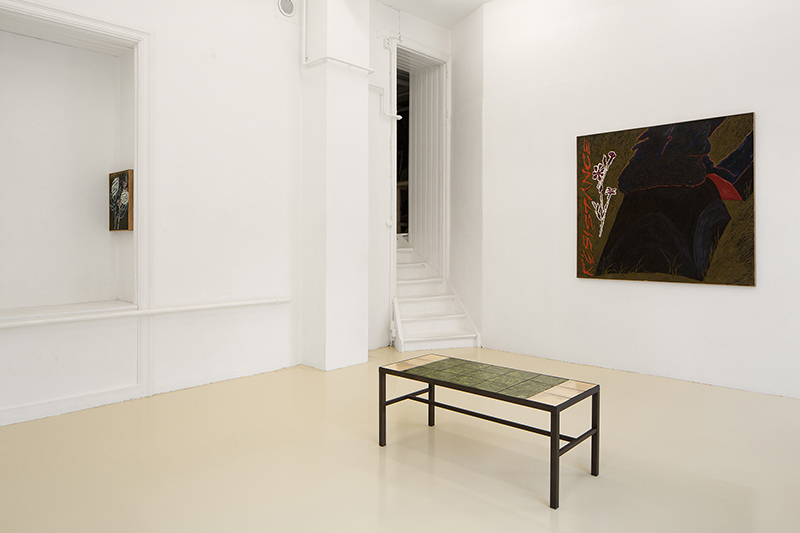 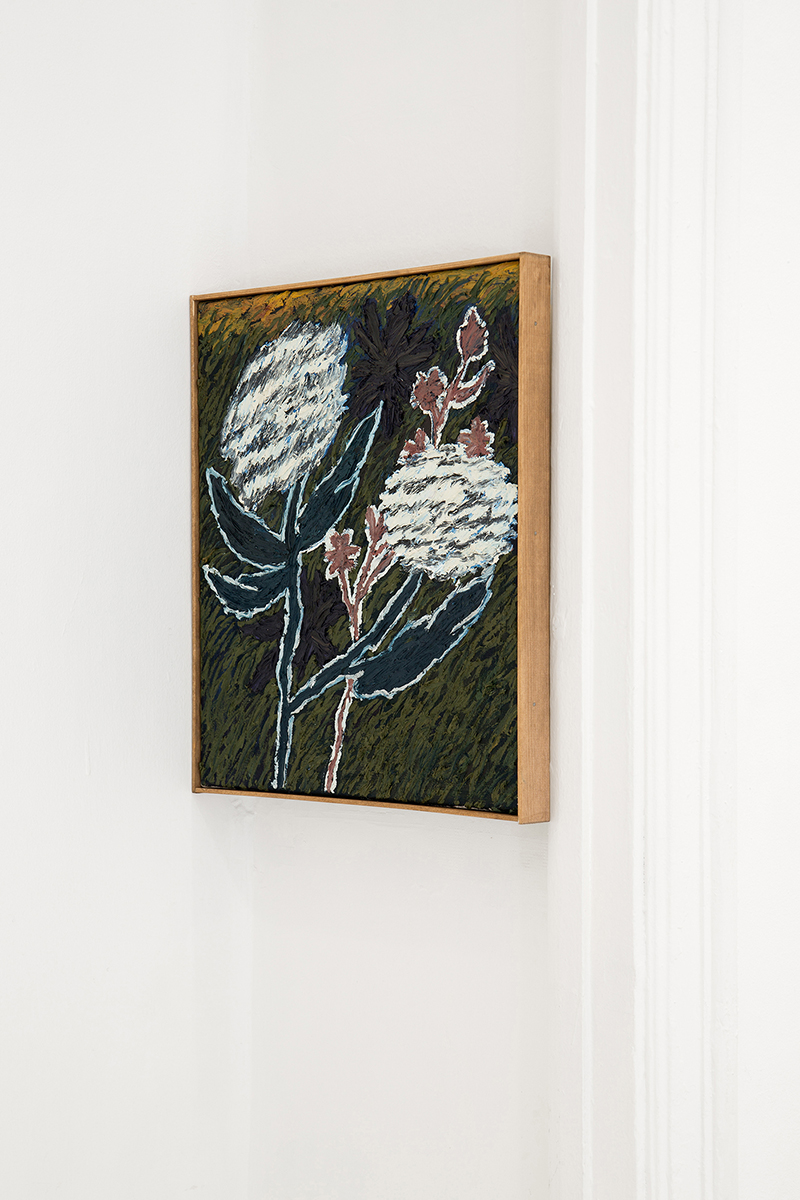 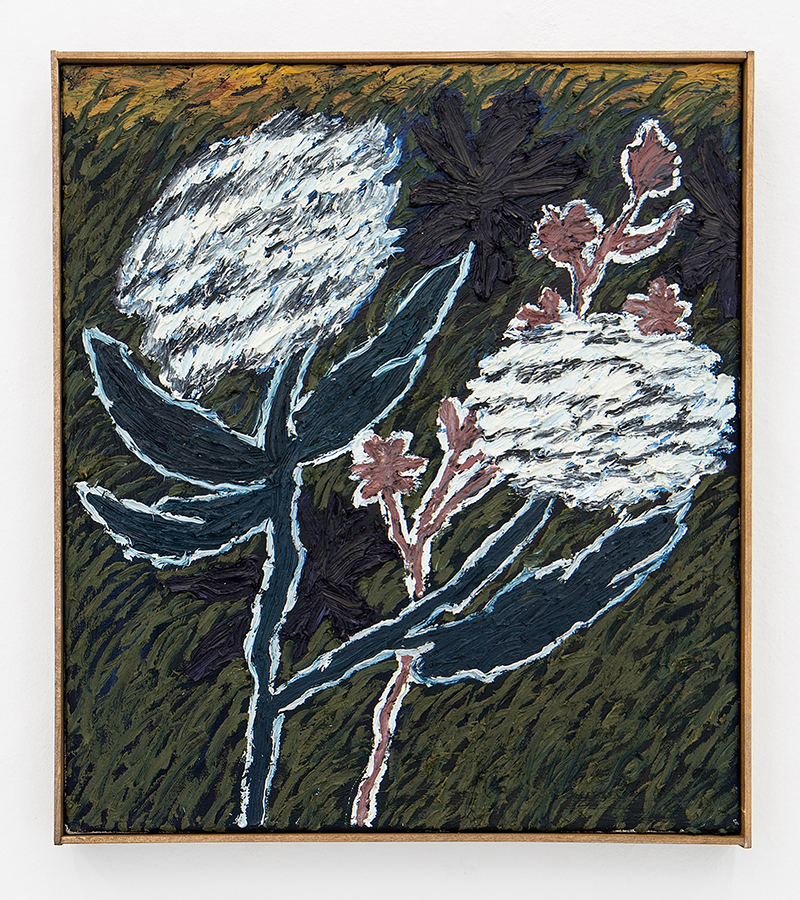 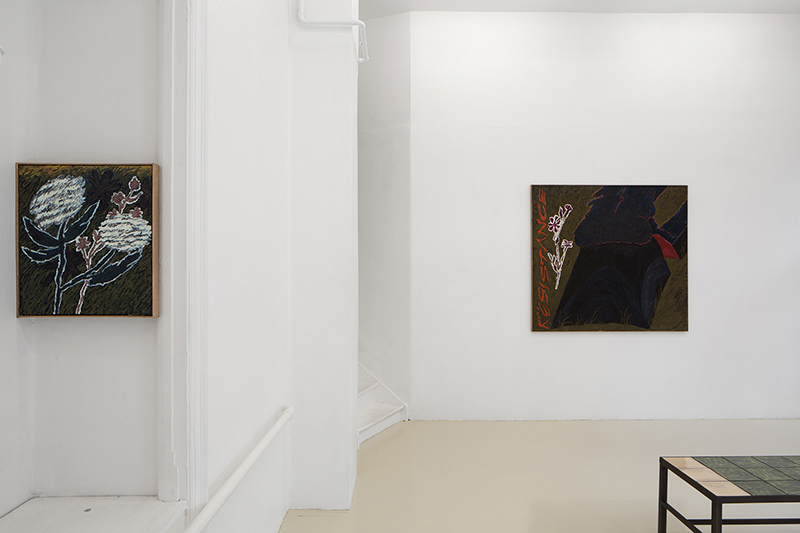 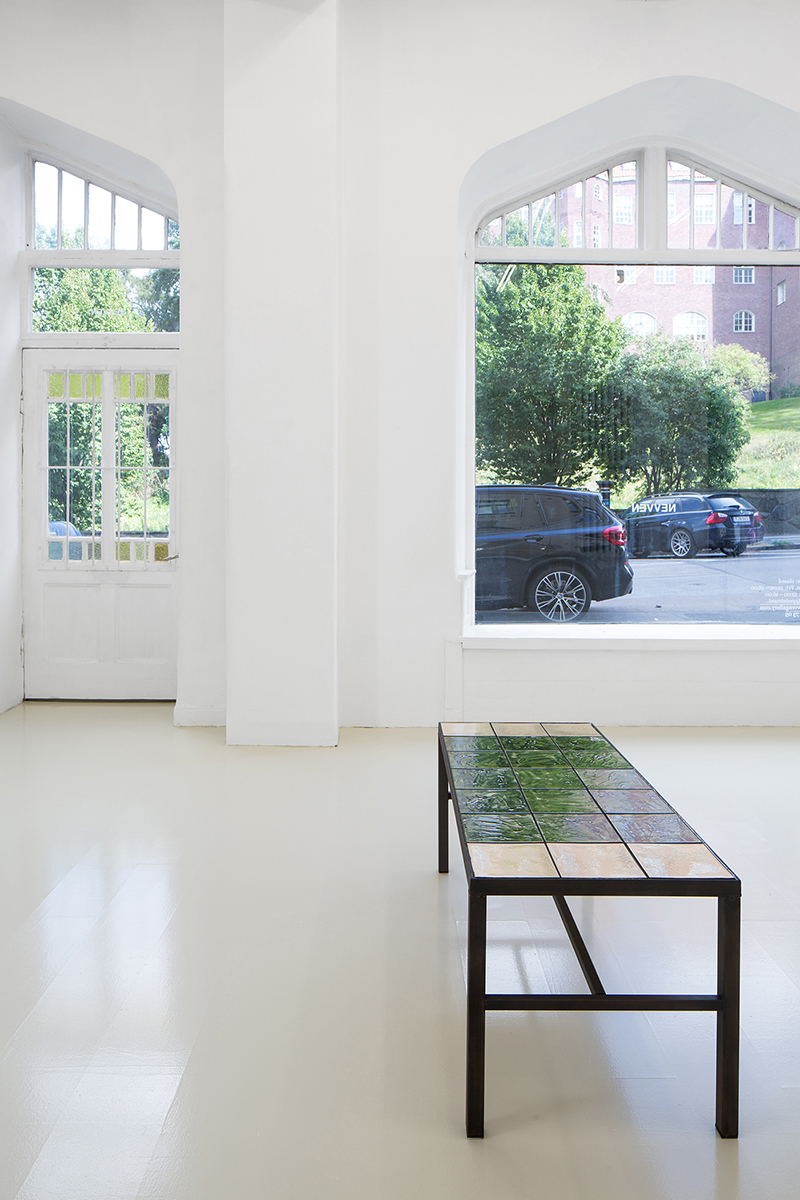 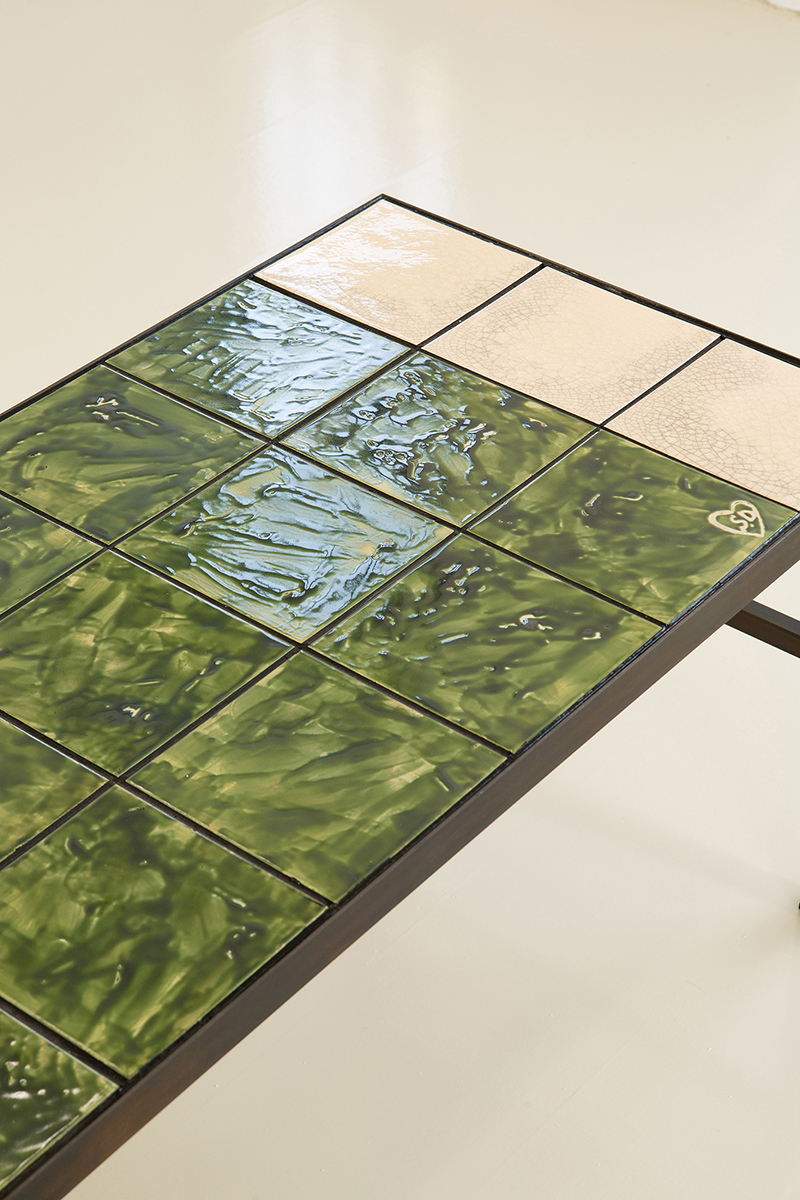 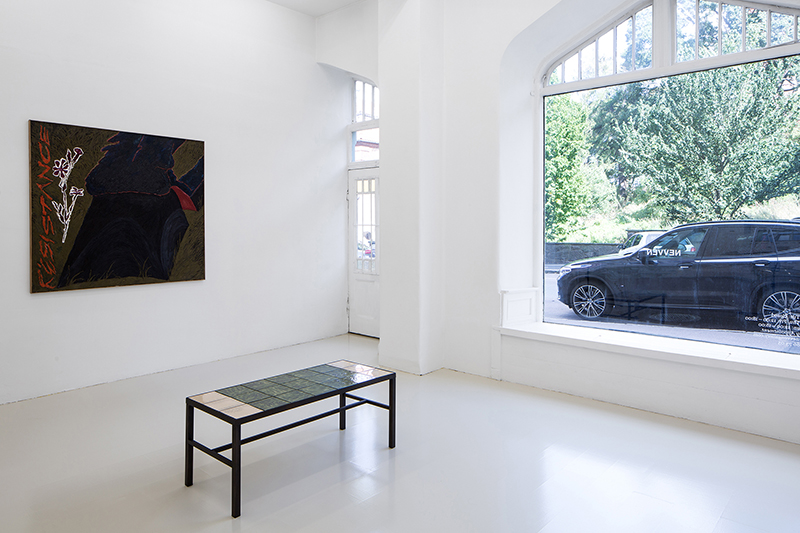 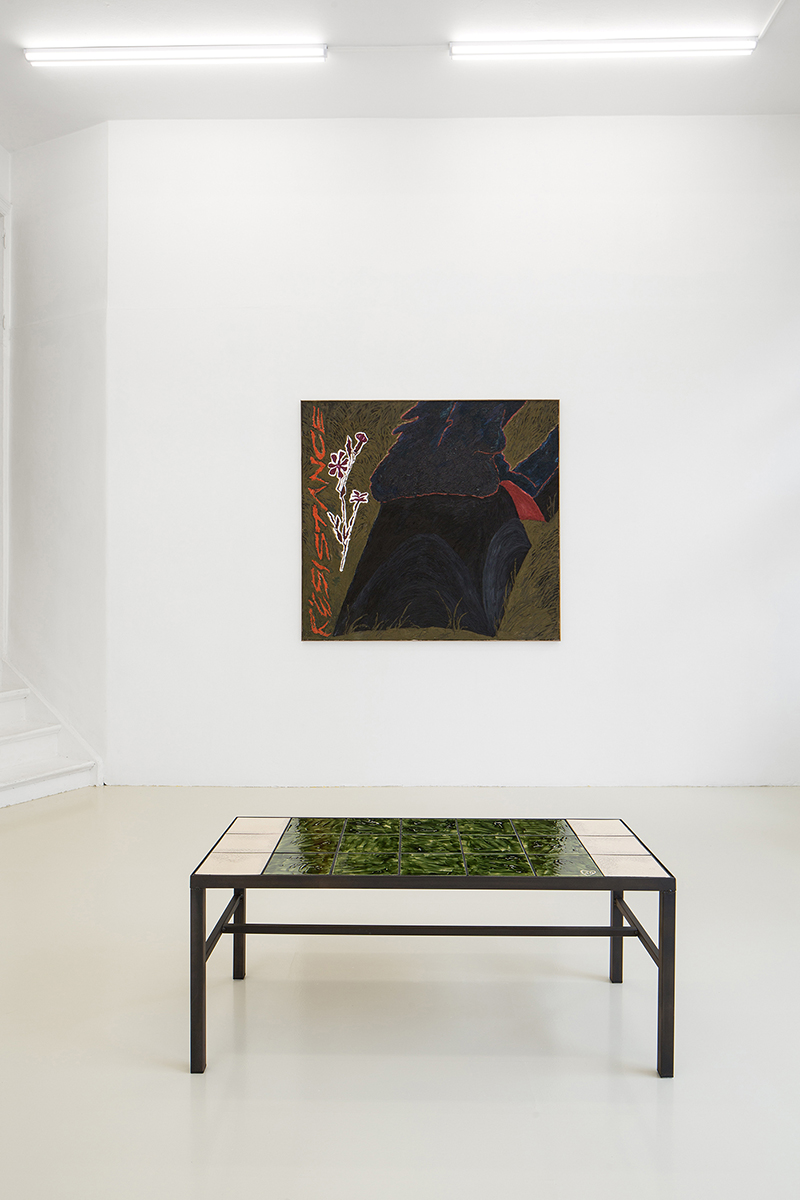 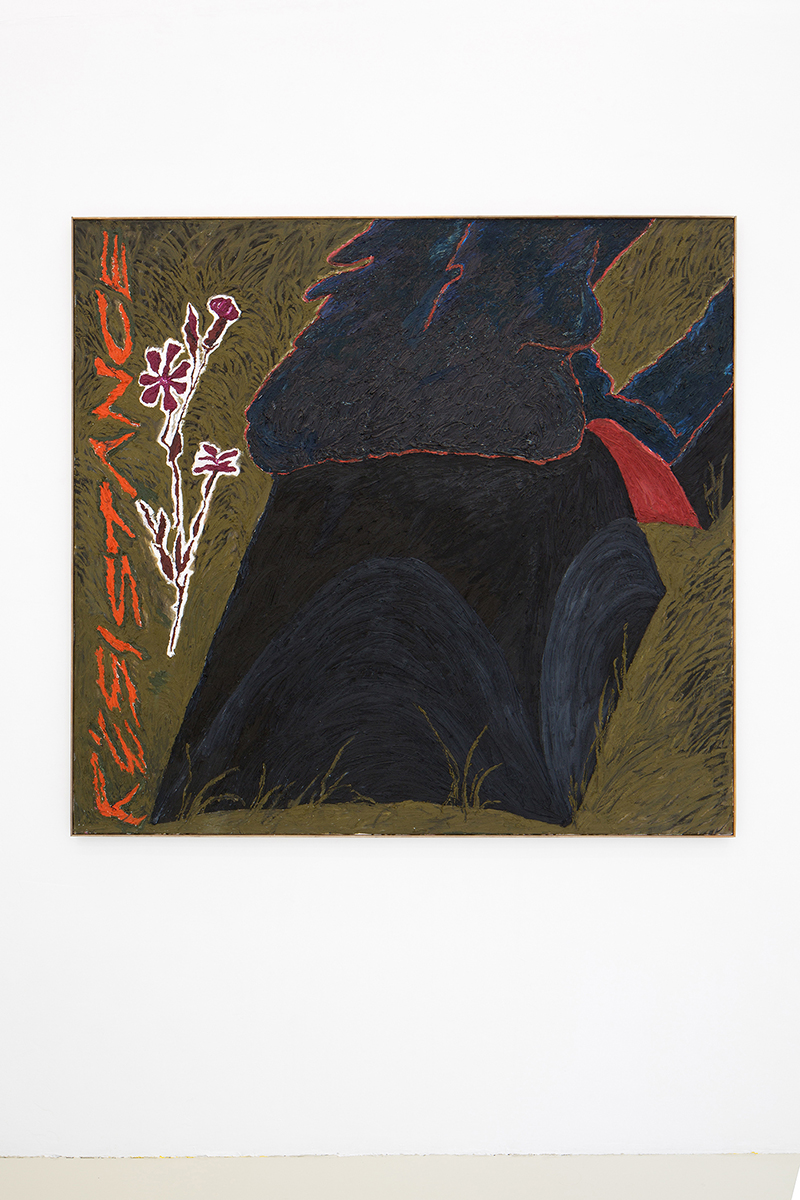 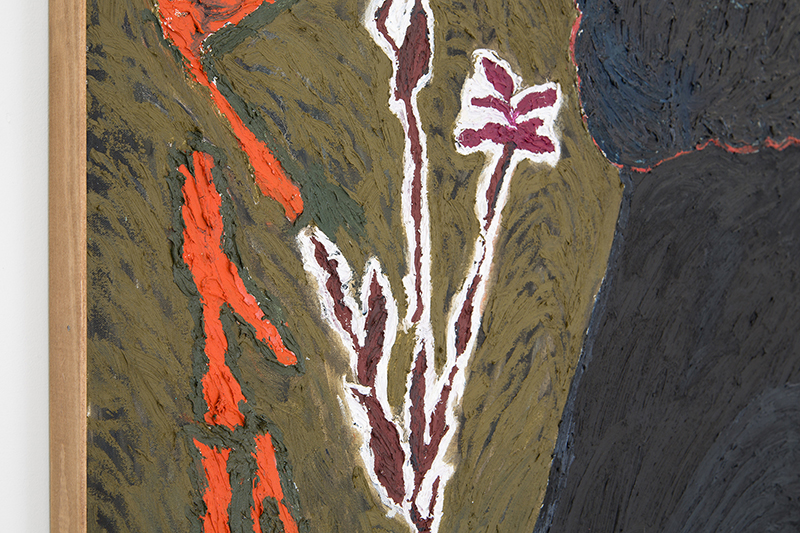 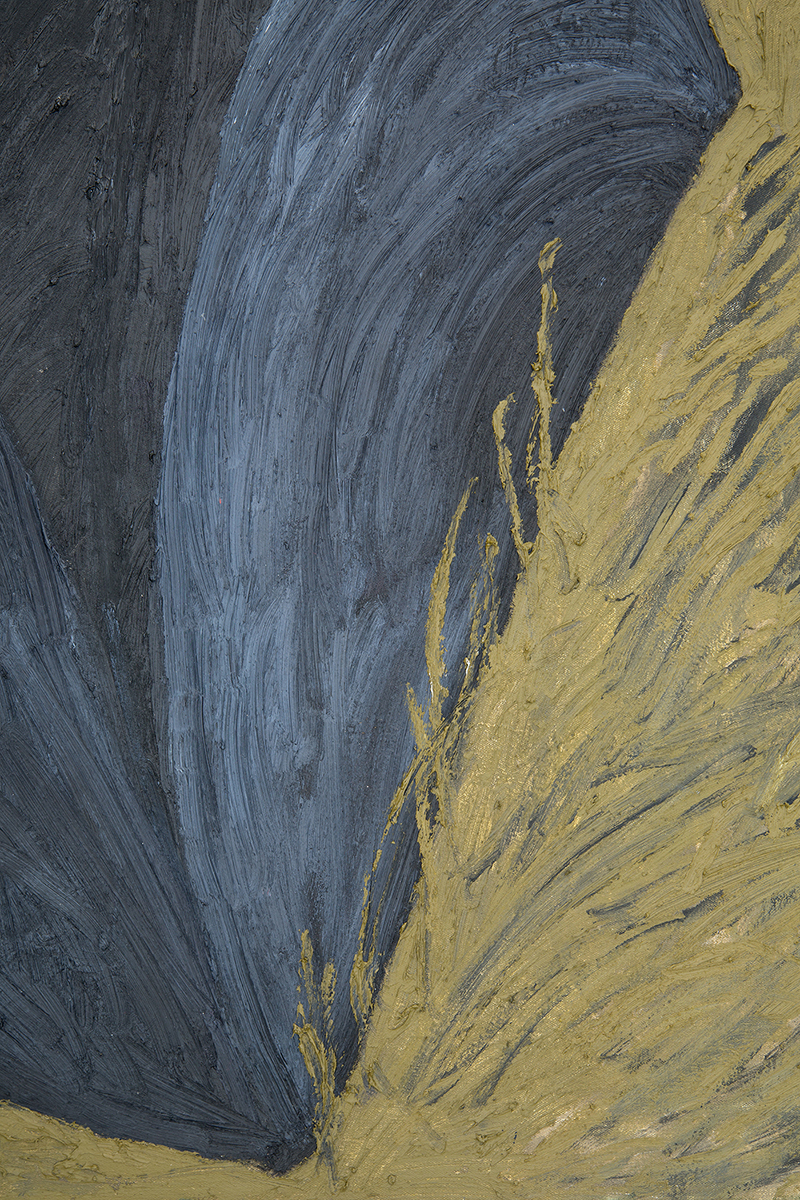 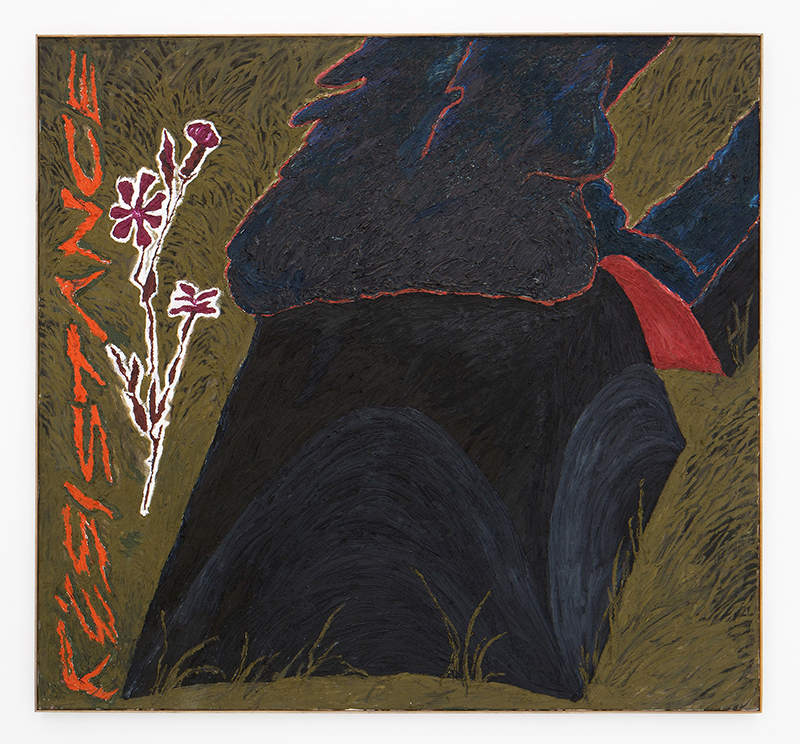 NEVVEN is proud to present Belgian Techno, a solo show by Belgian artist Stevie Dix, presenting a stark and imposing installation, centred on two of her largest paintings to date, dealing lyrically with the rediscovery of intimate memories, her youth in her native country and the roots of her political activism.

After living most of her adult life in South-Eastern England, Dix latterly moved back to Belgium. The move has been so recent that the works included in this exhibition, albeit started in Great Britain, are the first she completed after resettling and, as one might imagine, this change deeply informed the subject matter depicted. In the past years, Dix’s heavily materic paintings have already been concerned with an idiosyncratic research into a specific set of memories, linked to her native country and late adolescence. Her latest series was focused on close up depictions of shoes and drawn its inspiration from memories of the artist’s adolescence in Brussels and Antwerpen. These shoes - rendered in her personal painting style, where objects rise to symbols or embody cryptic metaphors - channeled the memory of wet streets and the first city-experiences of the artist as a young adult, in strikingly powerful paintings. But, if those works often lingered on the aesthetic surface and poetry of such memories, with Belgian Techno, Dix seems like venturing further into the analysis of this specific moment of her life. Using text - a new addiction to her works - and more complexly developed compositions which juxtapose diverse elements in tableaux reminding of rebuses, Dix digs deeper into her subjects. The starting point is the rediscovery of her native region, Limburg, the remote part of Flanders where Dix just moved back to, and a culturally and historically unique place in Europe. Not far from the famous Forest of Ardennes - where Germany was fought off by the Resistance at the end of World War II - a beautiful natural landscape, green and bucolic, coexists in stark contrast with the heavily industrialised city of Genk. The region, once popular among landscape painters, was radically transformed by the coal extraction industry at the beginning of the twentieth century and became later famous for producing some of the most extreme techno music of the 80es and 90es. It is in the dark tones of this former coal-mining area and of the musical Belgian subcultures that we find ourselves staring into when looking at the two large format oils on canvas composing this exhibition. And through this dark patina, we discover fragmented recollections from Dix’s own upbringing: walking on wet grass with platform shoes, lying down on a field in the early morning with the ears still ringing from a techno party, the loud memories of a night of extreme music, styles and tuned cars. But, together with these emotionally and visually charged reminiscences, something more seems to have seeped out of her memories. A heavy and dark rebellious feeling irradiates from these works. Dix seems here to depict the rediscovery of the moment in which, as a young adult, she chose to resist and reject a reality made of social impositions and stereotypes. Pier Paolo Pasolini once wrote: “We are tired of becoming forcefully a serious / Or satisfied youth, either criminals, or neurotics: / We want to laugh, be innocent, expect / Something from life, demand, ignore. / We do not want to be already so fast so sure. / We do not want to be already so fast without dreams”. It is in these feelings and in the natural passage from youthful rebellion to political awareness that these works gain a renewed complexity and, at once, relate the most with the currently turbulent historical moment we are living in Europe.

While After Night of Belgian Techno lyrically immortalises the rebellious influence of counter-cultures and the defiance of teenage years, La Résistance 1 celebrates Dix’s grandmother role as a partisan in the Belgian resistance during the war. These two works together depict an entanglement where emotions and ideas are indistinguishably intertwined, reminding of the deep connection

between the personal and the political. A heartfelt homage to both rebellion and activism, Belgian Techno brings to mind the words of Antonio Gramsci: ”I hate the indifferent. [...] Those who really live cannot help being a citizen and a partisan [...] Some whimper piously, others curse obscenely, but nobody, or very few ask themselves: If I had tried to impose my will, would this have happened?”

Stevie Dix (b. 1990) is a Belgian artist living and working in Genk, Belgium. Her oils on canvas are bold and gestural, composed in an essential style where simple objects and minimalistic compositions are elevated to symbols and metaphors for intimate feelings and, at times, political perspectives. She had solo exhibitions at Galerie Chloé Salgado (Paris, 2020), L21 Gallery (Mallorca, 2018), NEVVEN (Gothenburg, 2018), The Journal Gallery’s Tennis Elbow (New York, 2017), The Cabin (Los Angeles, 2017) and Rod Barton Gallery (London, 2017). She has also been included in group shows at Castor Projects (London, 2019), Keteleer Gallery (Antwerp, 2018), Plus One Gallery (Antwerp, 2018 and 2017), Hanna Barry Gallery (London, 2017) and Carlsberg Byens Galleri och Kunstsalon (Copenhagen, 2017).