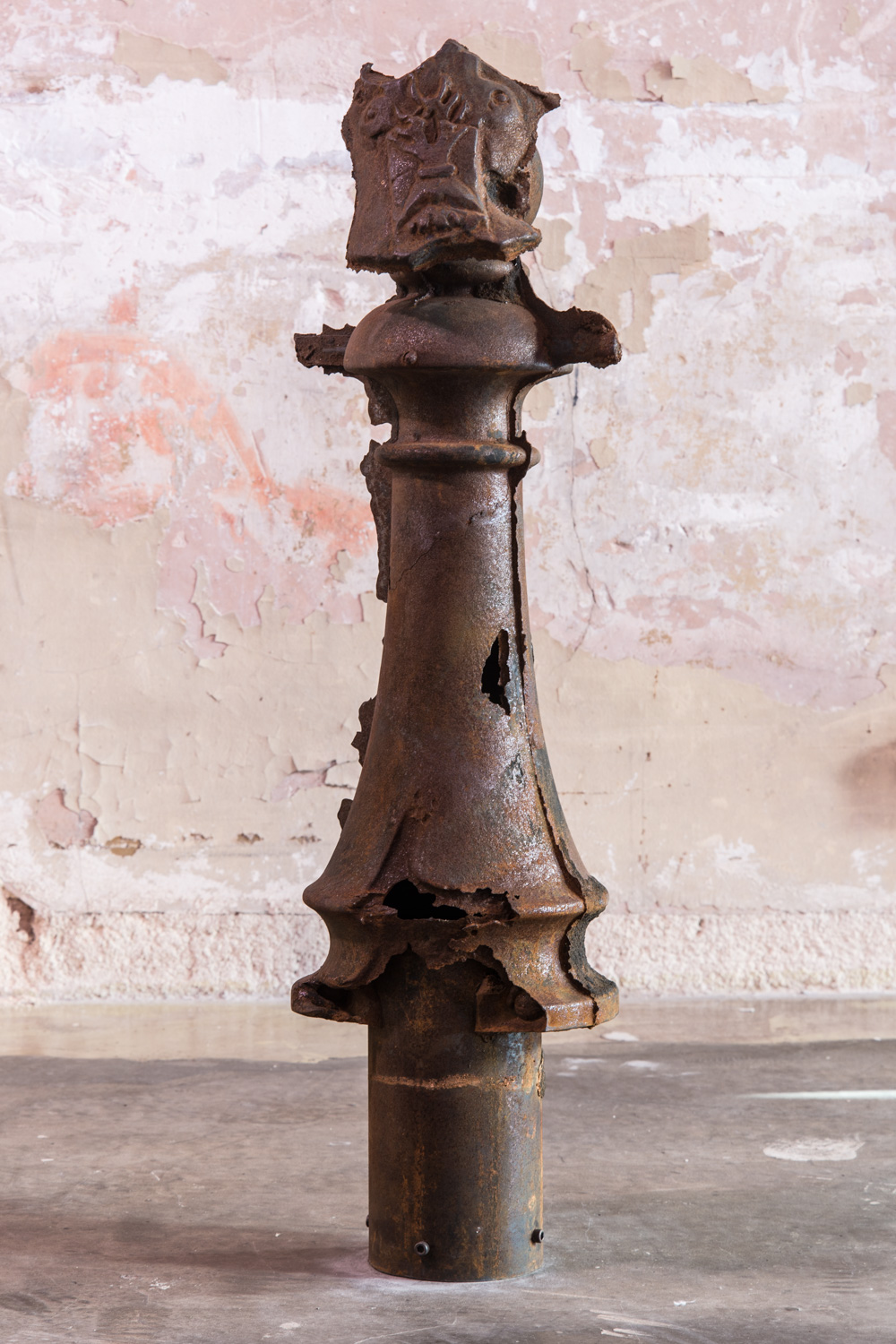 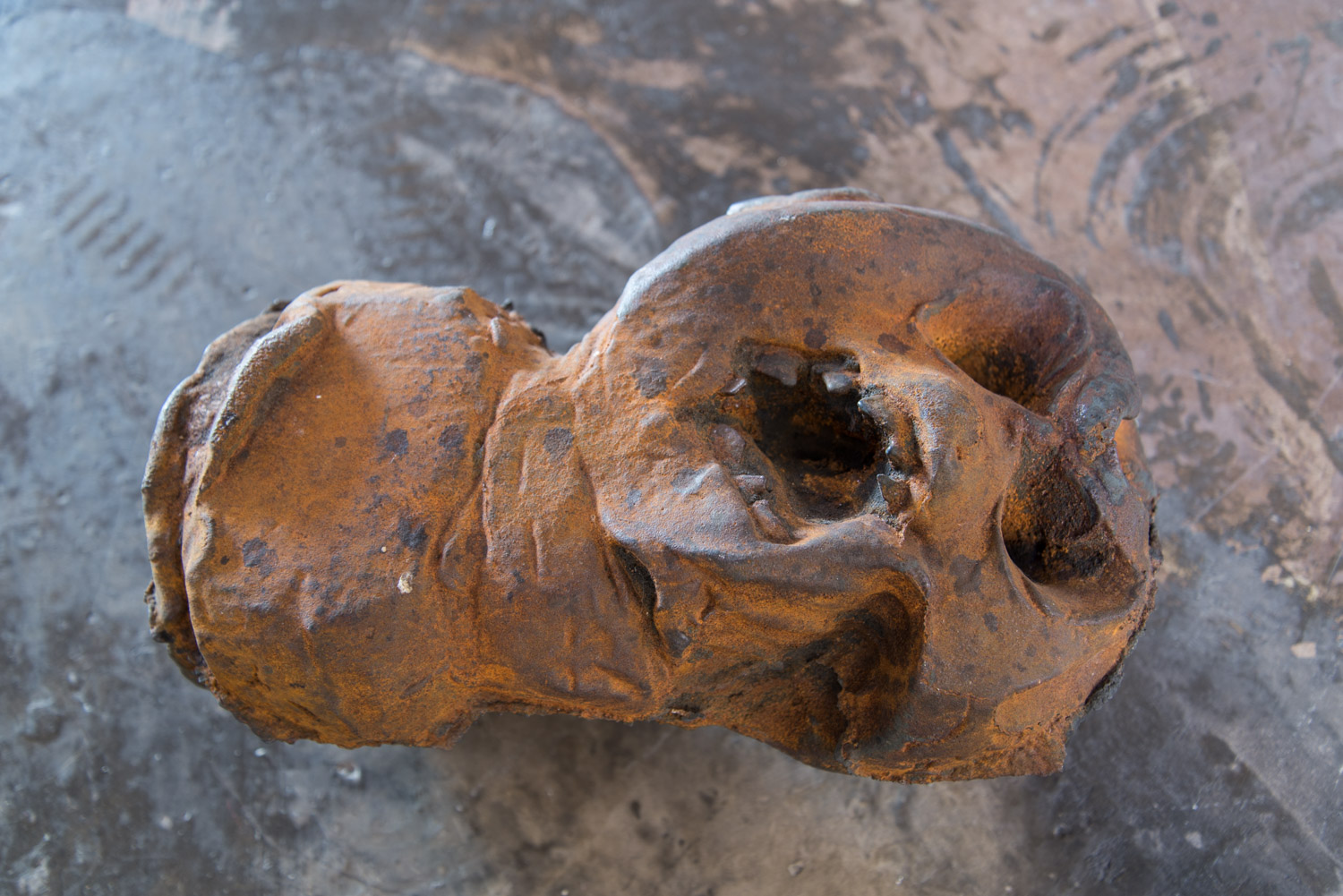 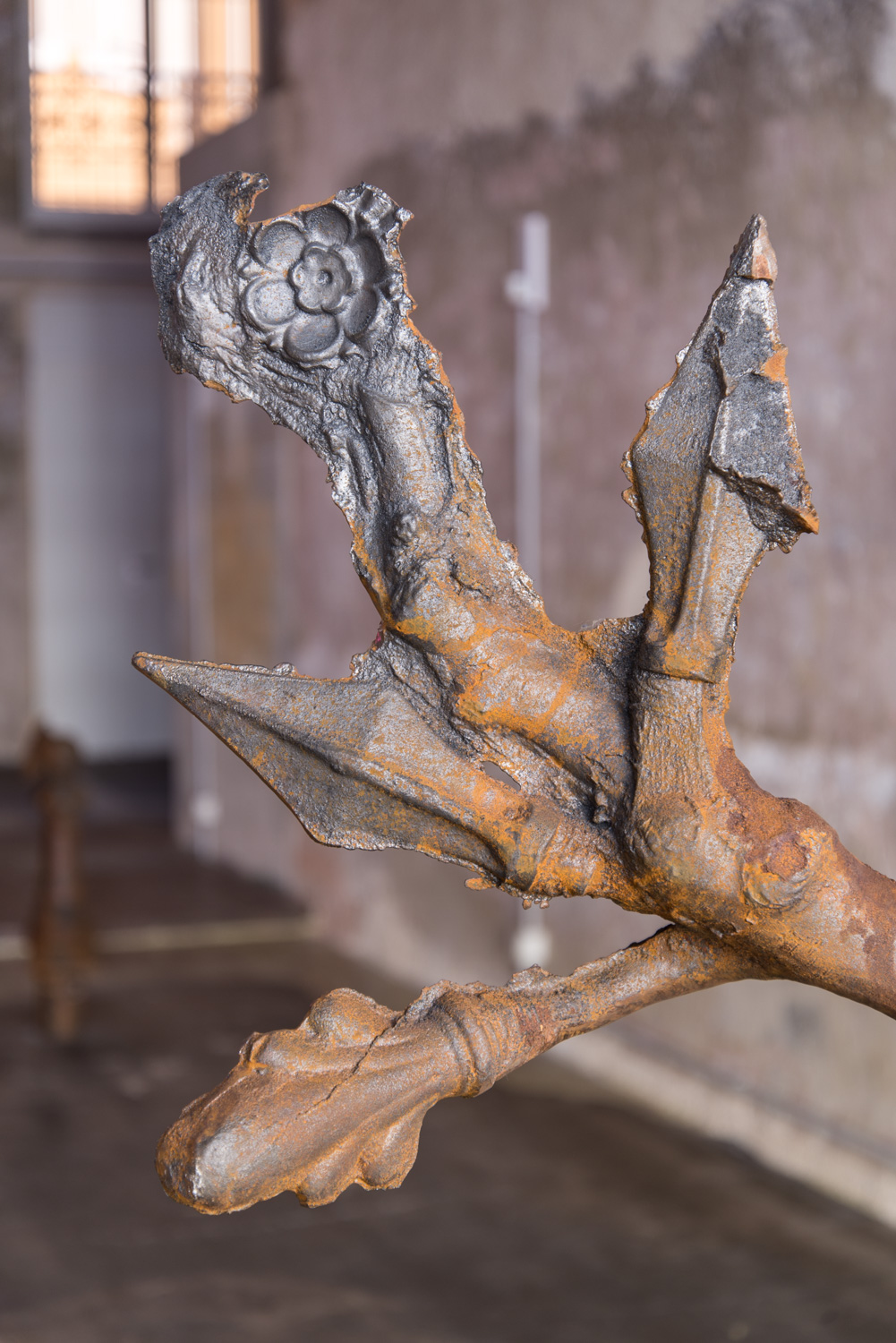 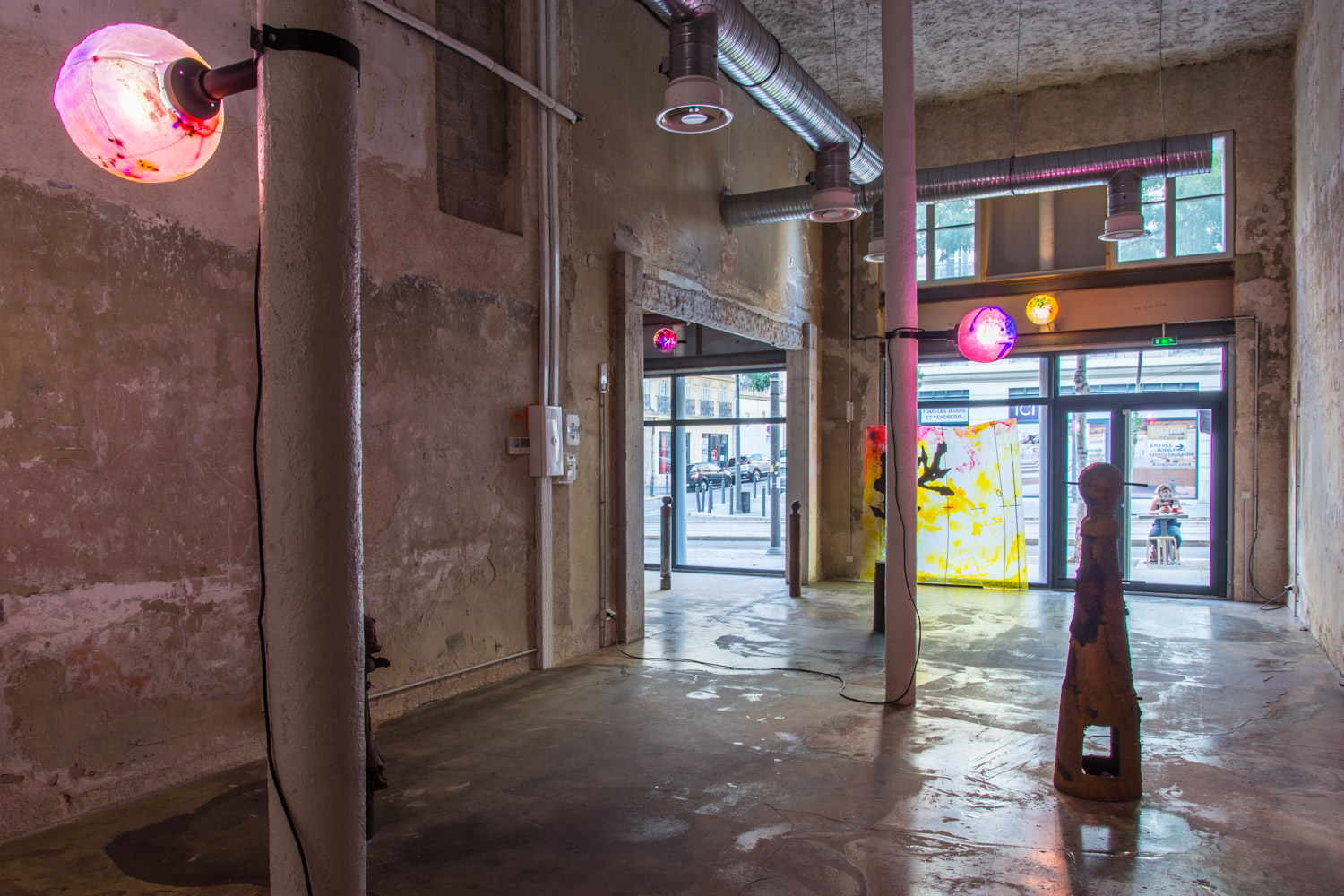 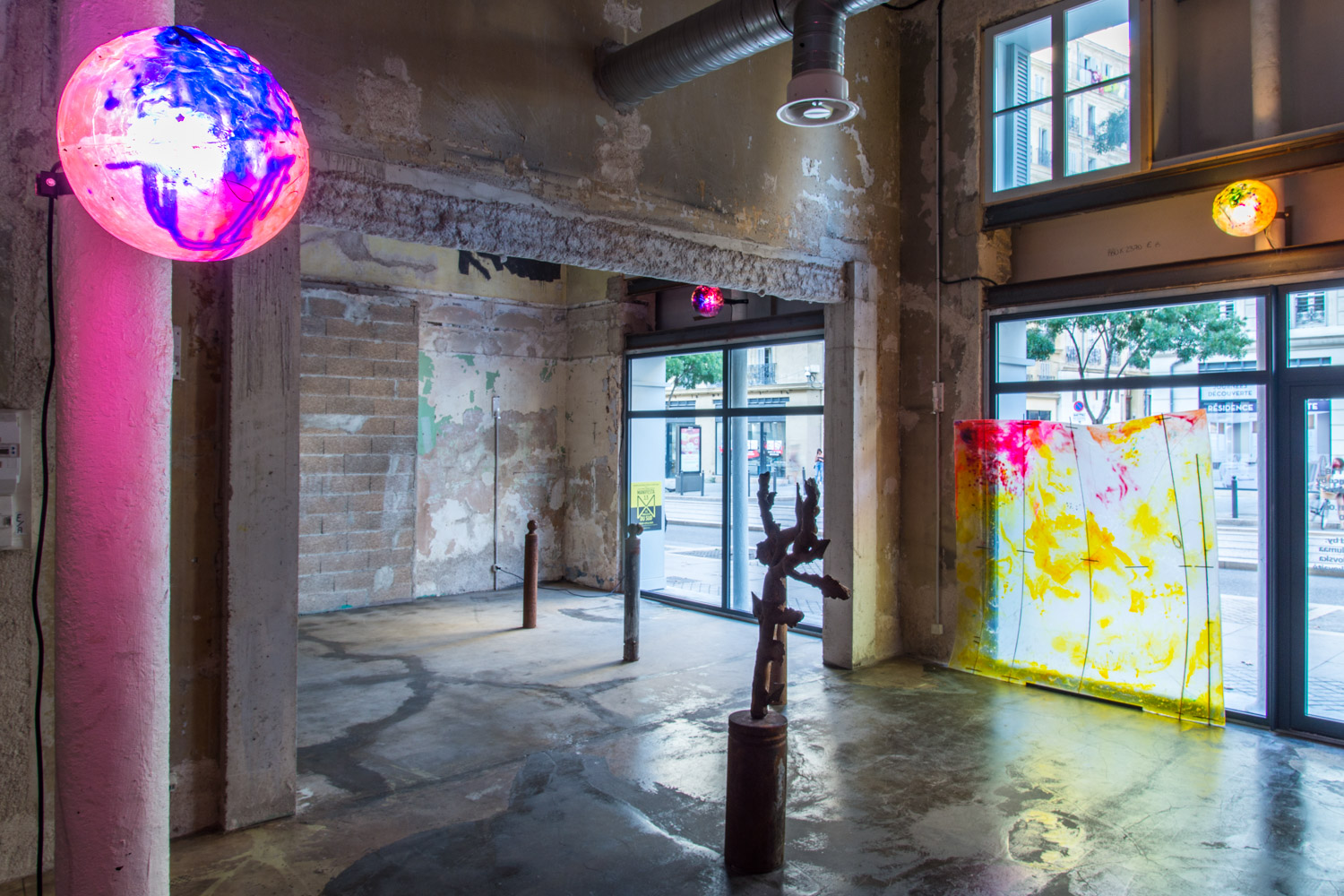 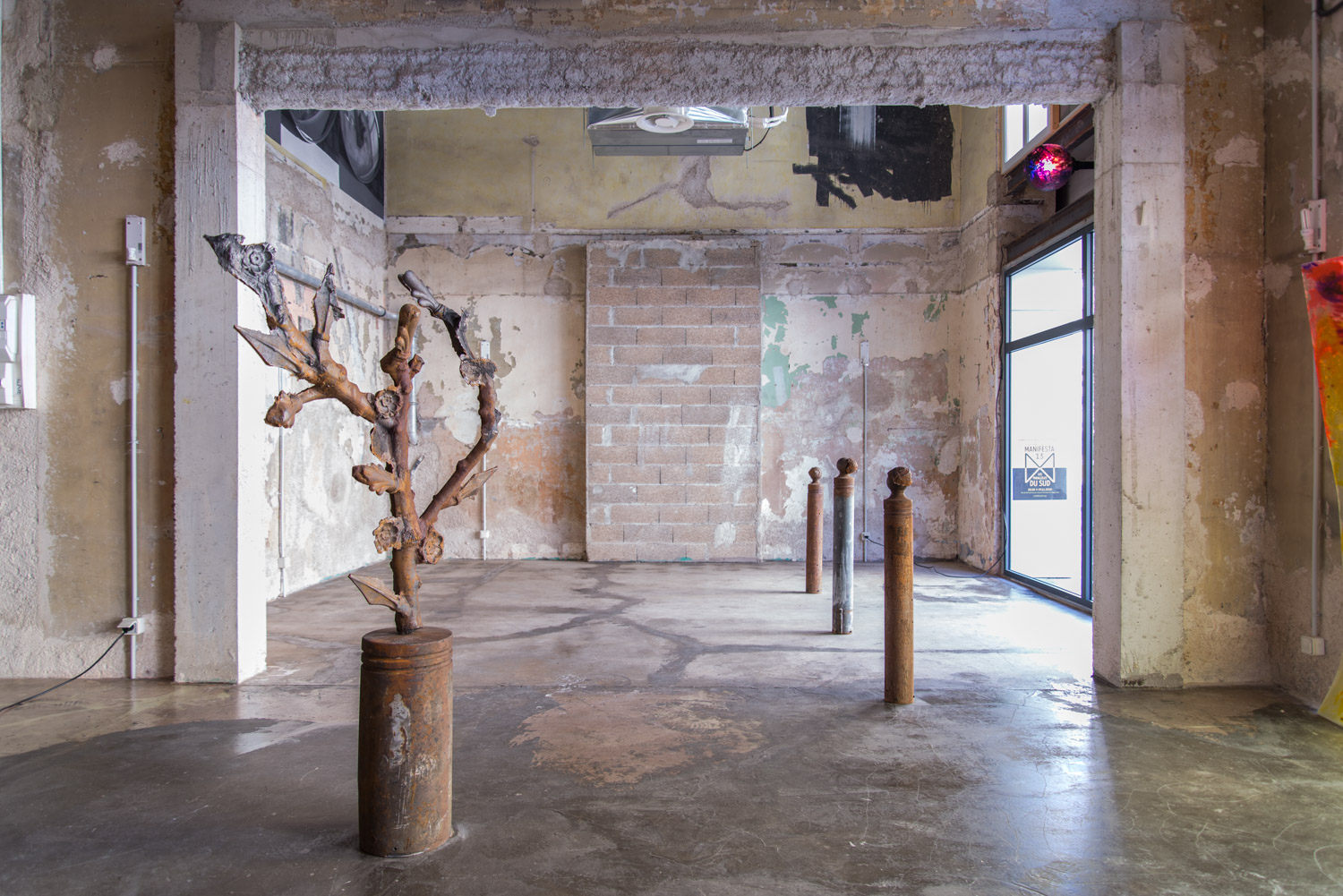 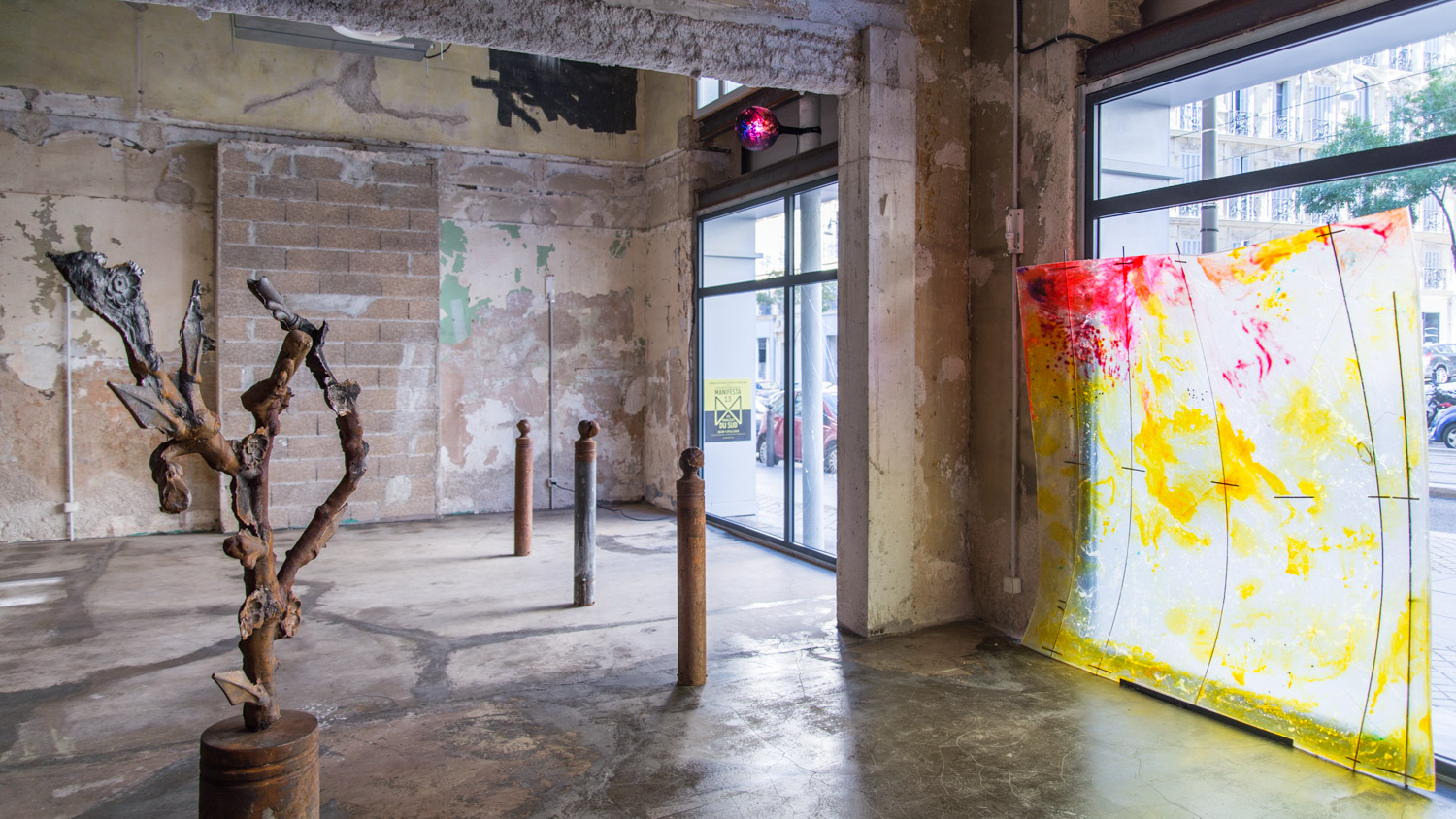 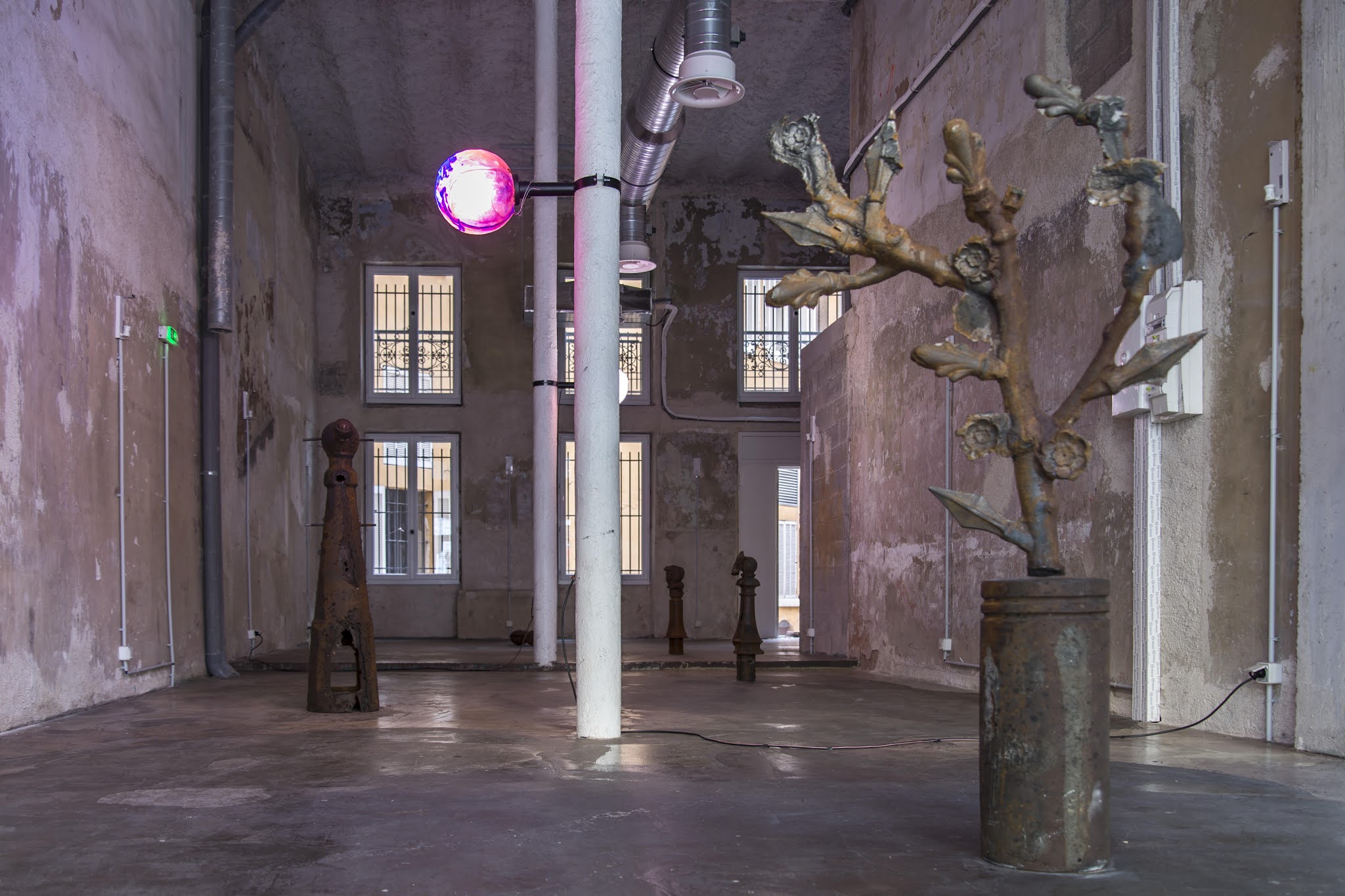 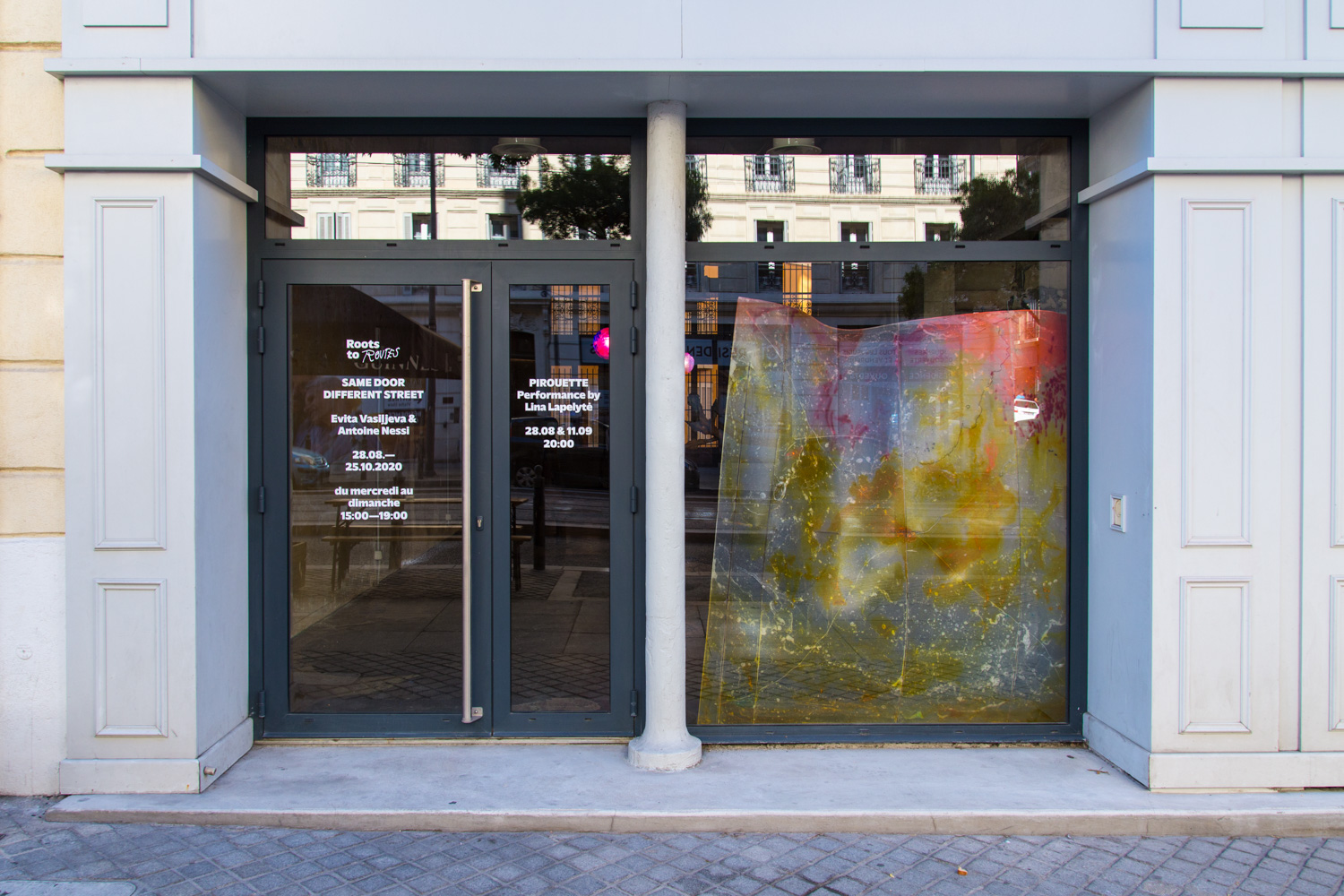 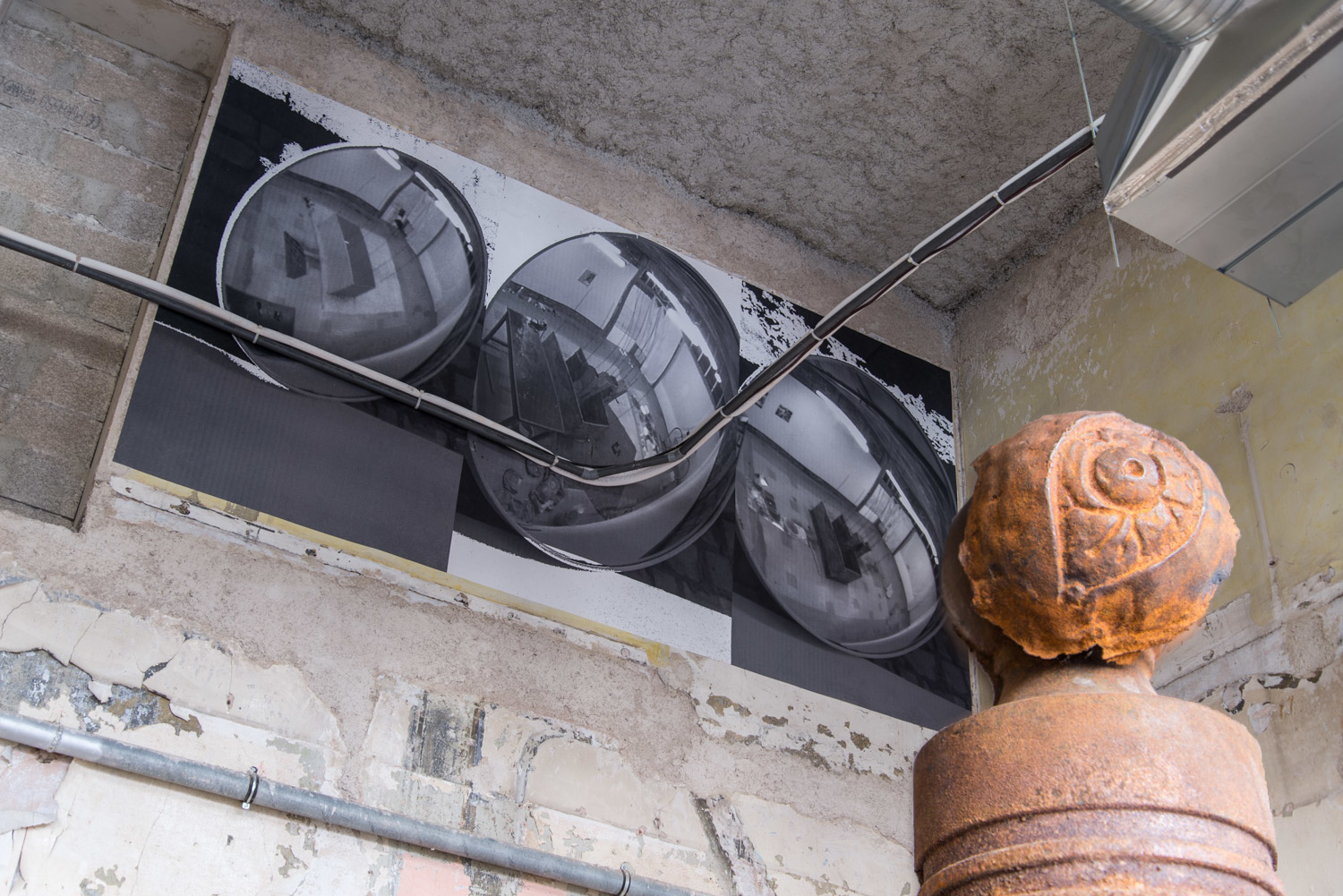 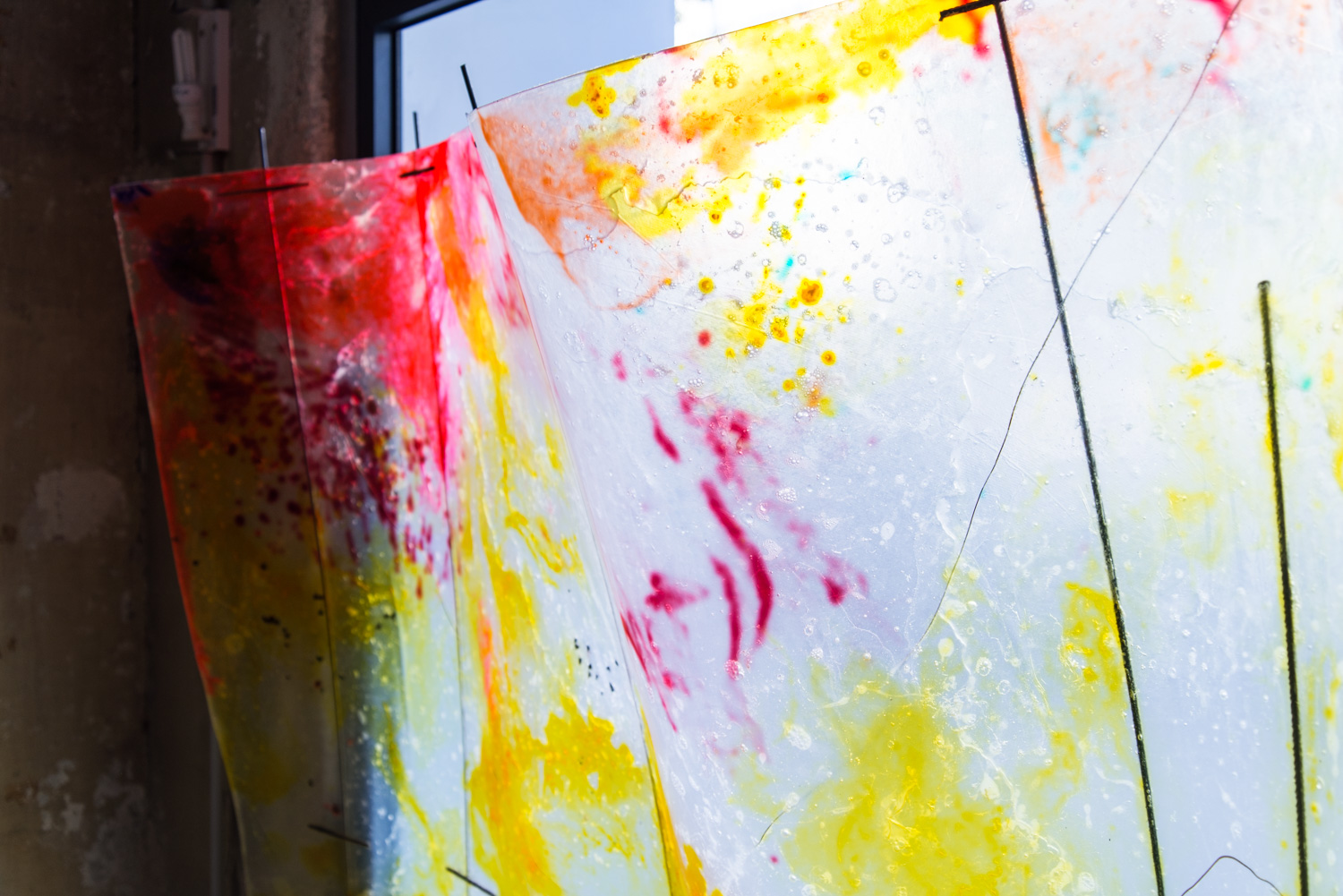 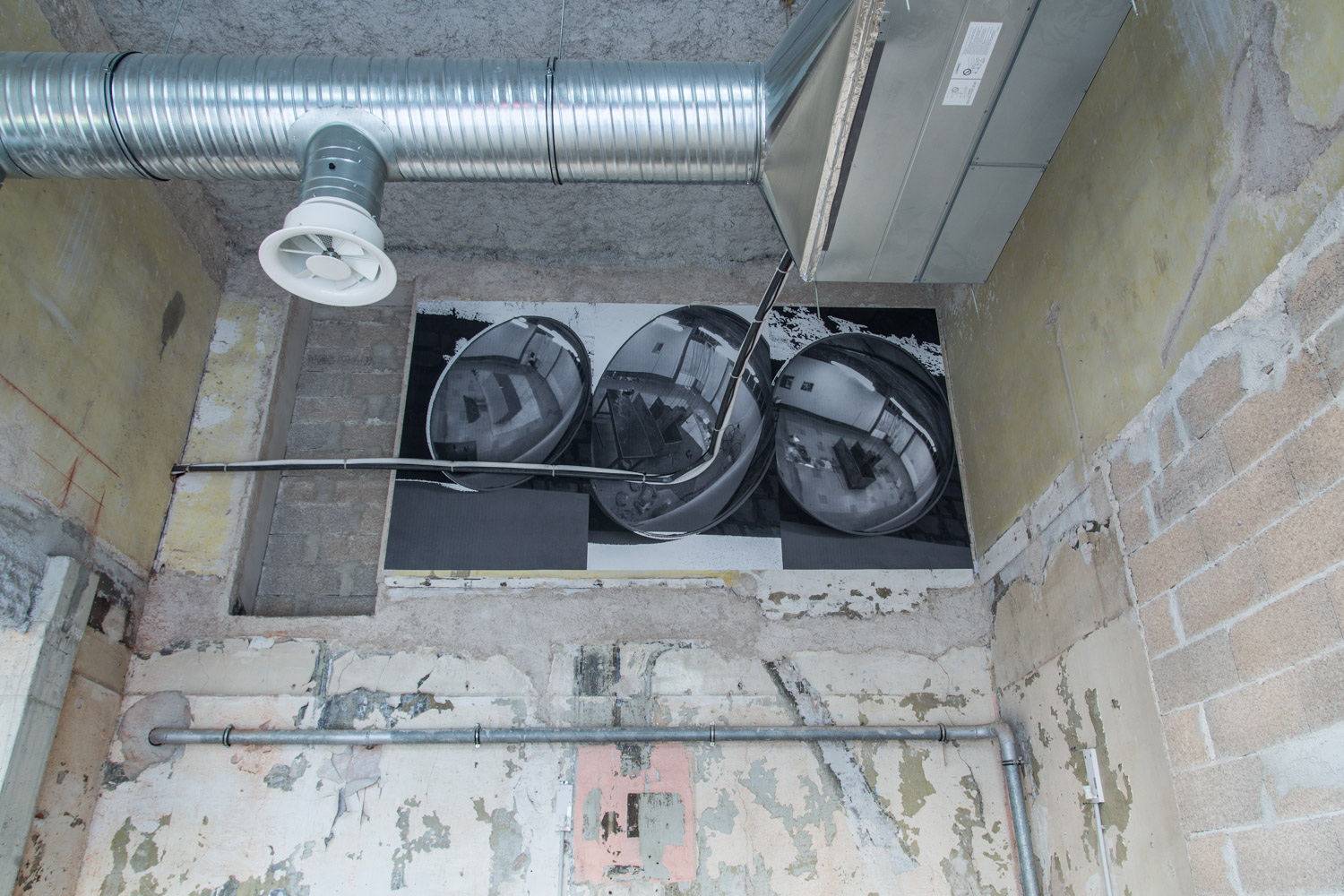 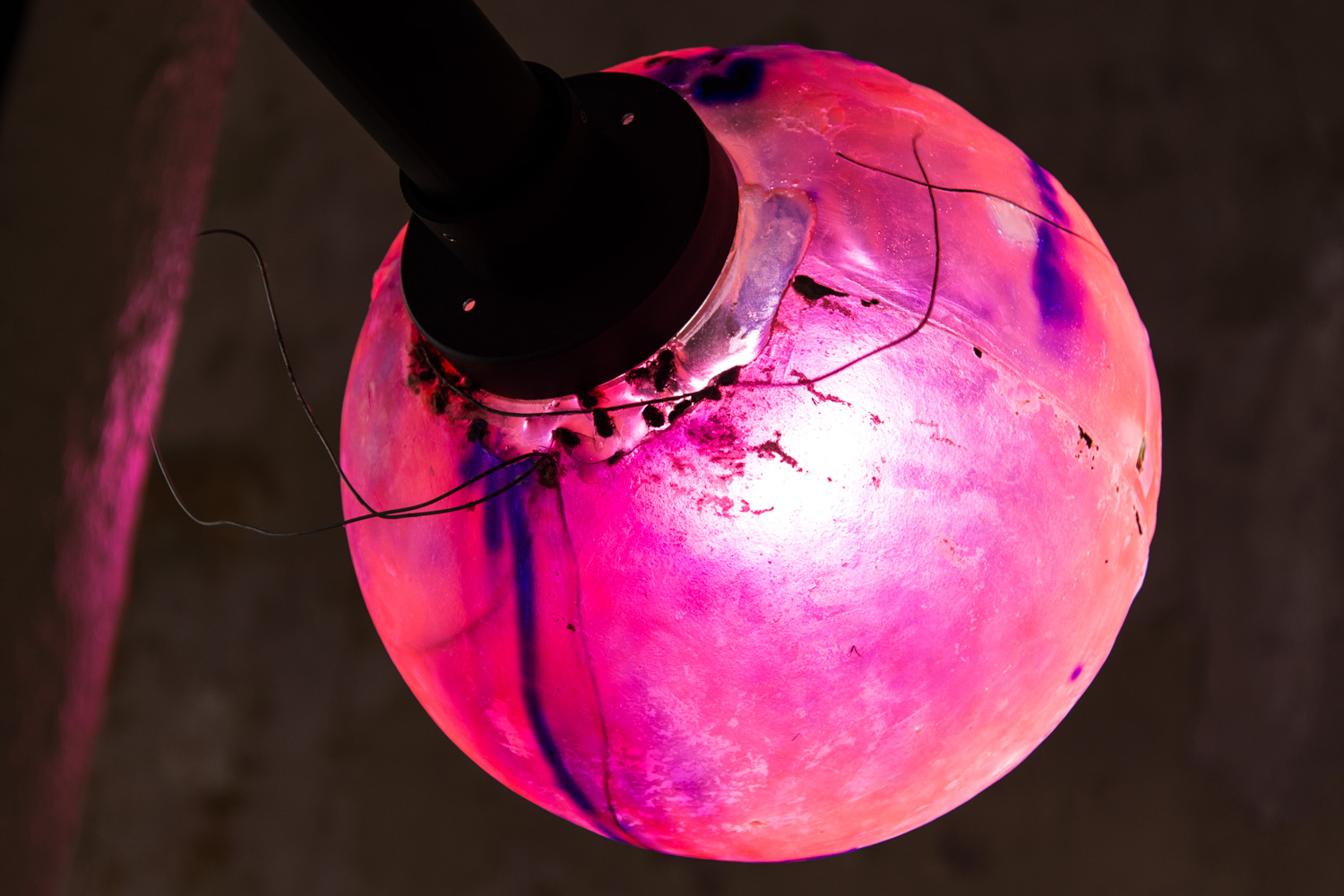 For the duo exhibition Same door different street Latvian artist Evita Vasiļjeva and Marseille-based French artist Antoine Nessi have created works that reflect on the ambience and the language of the city. Inspired by the urban imagery of Marseille, Evita and Antoine employ elements from the city’s streets and its architecture, transforming them into containers, which act as molds to cast new pieces. Both artists often use casting as a method of producing their work. The familiar unfolds into something new, hybrid, reminding us that the known and the unknown live next to and within one another.

Evita has chosen to work with Marseille’s lights and its soap industry. Her sculptures resemble street lamps or new planets and inside them one can find little flies, resembling precious ambers that are likewise found with flies inside them on the Baltic coast. Flies have been collected by Evita in Riga, Latvia and transported to Marseille. The seducing and magnetic sunsets of Marseille were the point of departure for her work.

While economical and political flows in Marseille shift, bollards remain the guardians of the town, blocking cars from driving or parking in pedestrian areas. Still, we walk by these objects countless times and never pay attention to them. Antoine calls them ghosts of the streets. He has selected the most common patterns to work with and turned them into strange creatures or characters. Usually without faces and voices, the bollards now become active narrators, reviving the memories and history of this urban space.

Evita Vasiļjeva is a Latvian artist currently in residency at the Fiminco Foundation, Paris. She works primarily in sculpture and installation. The objects she creates are made from basic materials used in construction, old electronics, and other relics of the urban landscape. While their significance is cryptic and open to interpretation, formally they set up stages in space to interact with each other and their surroundings. Recent exhibitions have taken place in: Marwan, Amsterdam; LOWER. GREEN, Norwich; kim?, Riga; Litost, Prague; Wschod, Warsaw; Tallinn City Gallery; Nest, Den Hague; Fondation Ricard, Paris; Lustwarande, Tilburg; Latvian National Museum of Art, Riga; W139, Amsterdam; ODD, Bucharest; P/////AKT, Amsterdam; and Art in General, New York.
Antoine Nessi is a Marseille-based sculptor. He holds a degree from the Beaux-Arts de Paris. His work has been shown in solo exhibitions at the Pipe Factory, Glasgow; 360 m3, Lyon and Interface gallery in Dijon.  He has participated in various group exhibitions including “Par les temps qui courent” at the Grand Café art centre in Saint-Nazaire, France; “Being thing” at the Centre d’art et du paysage in Vassivière, France and “The Promise of Moving Things” curated by Chris Sharp at the Centre d’art contemporain Crédac in Ivry-sur-Seine, France. He has done several residencies, including at Galsgow Sculpture Studios in Scotland and the Darling Foundry in Montreal, Canada.
Roots to Routes is a collaboration between artists, curators and non-profit organisations from the city of Marseille and the Baltic countries, curated by Merilin Talumaa, Maija Rudovska and Justė Kostikovaitė, taking place in Marseille as part of Manifesta 13 Biennial programme Les Parallèles du Sud from 28 August to 25 October 2020. The project invites strangers to encounter the unknown and unfamiliar within the urban environment, while exploring and challenging concepts of ‘homebase', 'belonging’ and ‘identity'.
The project is supported by:
Baltic Culture Fund, Lithuanian Culture Institute, Cultural Endowment of Estonia, Estonian Culture Abroad, Latvian State Culture Capital Foundation, Estonian Embassy in Paris, Manifesta 13 Marseille. The European Nomadic Biennial
Antoine Nessi’s works were created in collaboration with voyons voir | art contemporain et territoire and “Fonderie de Roquevair”
Tags Antoine Nessi, Evita Vasiļjeva, Justė Kostikovaitė, Lazy exhibitions, Maija Rudovska, Manifesta, Marseille, Merilin Talumaa
Newer Post Older Post Home