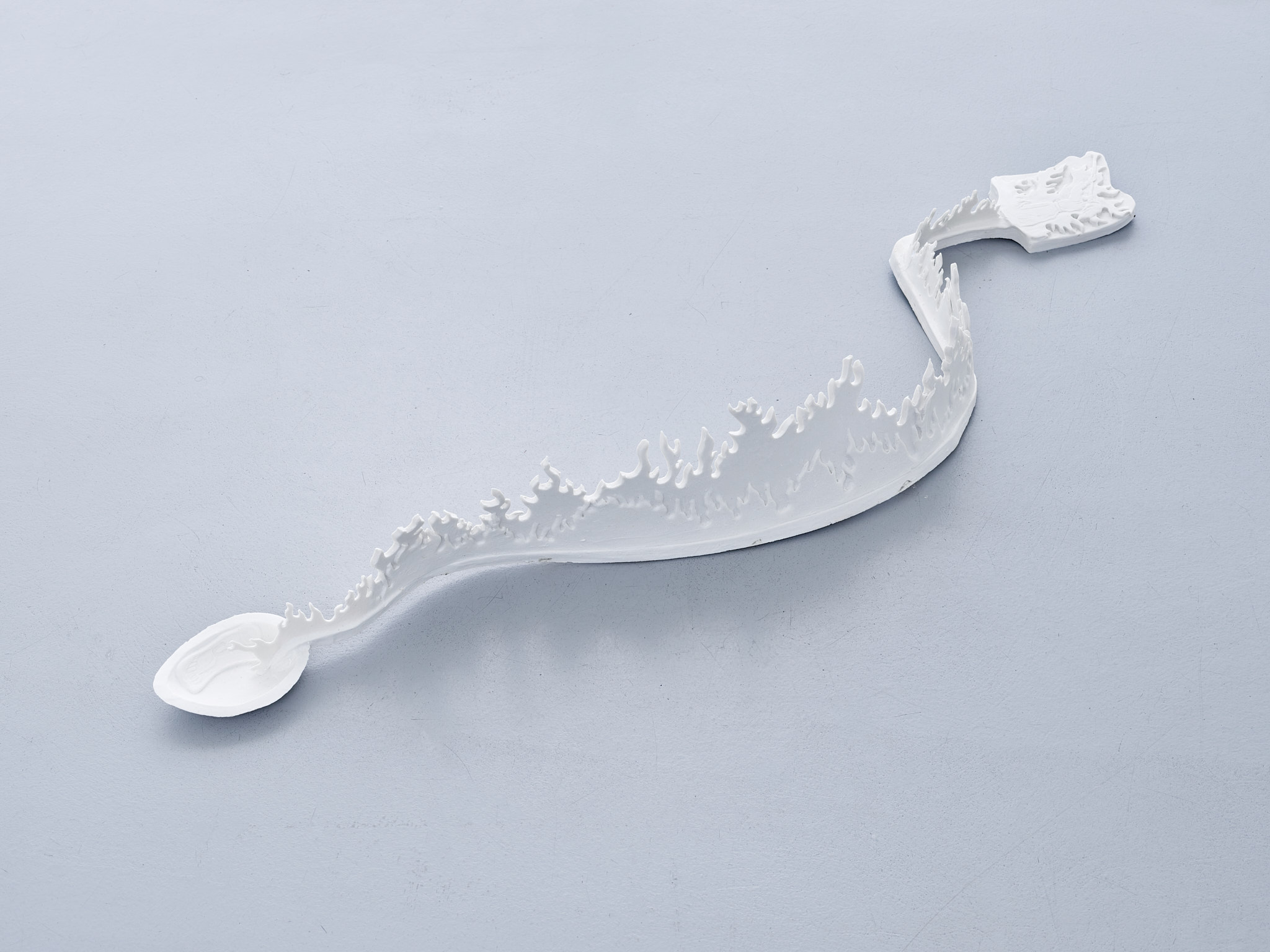 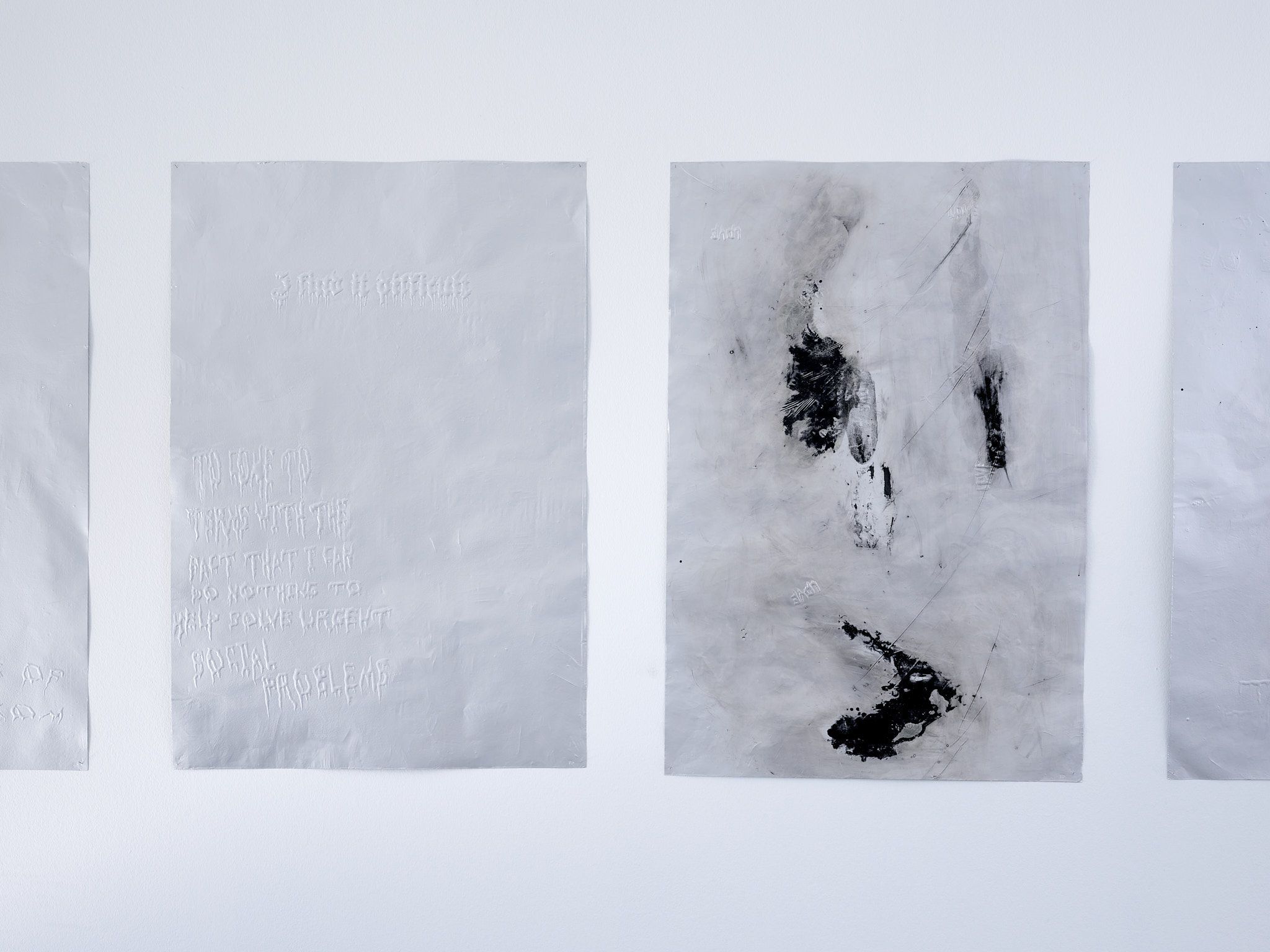 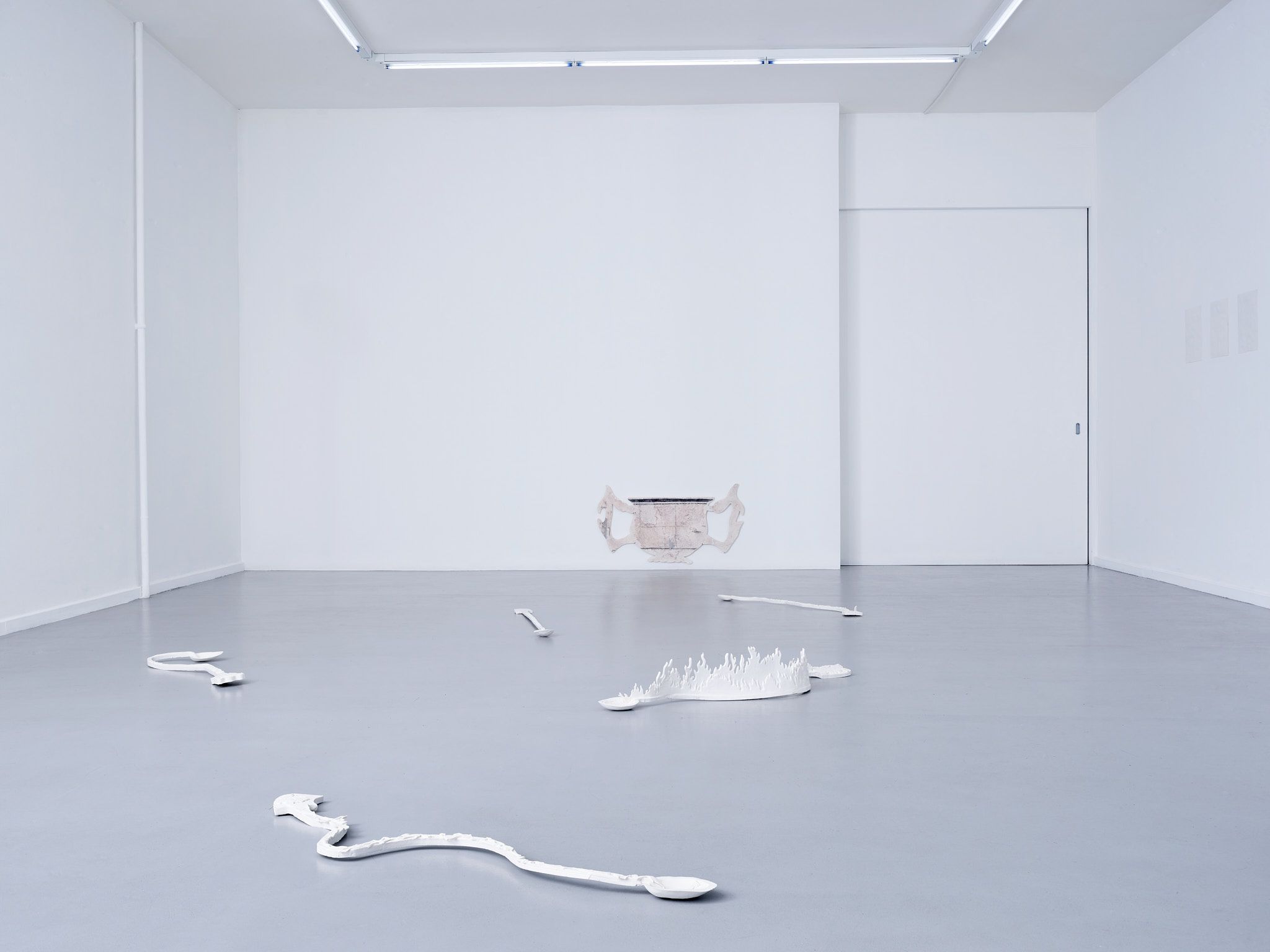 Paul Paillet's solo exhibition at the Centre d’édition contemporaine was intended to open in March 2020, but was postponed due to lockdown until September 2020. For this exhibition, Paul Paillet has developed a proposal drawing on numerous references that insect and overlap, creating an ensemble of several pieces: sculptures and a mural work in porcelain, a newspaper, a radio and a publication. Each of these elements contains various cultural and personal indices that construct a kind of staged presentation. The theme of fascination for fire is partly autobiographical, linked to a reflection on a return to the artist's adolescence, his adventures and darker moments in his past, which result in semantic shifts, from the private sphere to more critical and committed societal and political implications.

This display combines a cup, a few spoons, a newspaper and a radio, suggesting the everyday breakfast ritual. Yet this ensemble proves to be less mundane, innocent and reassuring than our usual coffee set and favourite morning music, bringing back memories that highlight the gaps between an experience and individual perception, and societal inconsistencies, drifts and injustices. While these white porcelain utensils recall the Burgundian style and the artist's initial training, the relief motifs of flames, lightning or flowers are worked in a highly refined and elegant design and appear perfectly harmless, though the true source underlying the creation of these objects is of a completely different nature. In reality, this is an oversized replica of the small plastic teaspoon given out in the 1970s at McDonald's, made famous at the time by cocaine dealers who appreciated the fact that it held exactly 100 milligrams. This implement that should have remained almost invisible became the famous "Cocaine McSpoon", a symbol of a market much more powerful than that of the hamburger, forcing McDonald's to withdraw it from their restaurants.
The newspaper Untitled (The Path), 2020, which accompanies this morning meal, with its aluminium foil pages, features text in relief (embossed), bearing traces of acetone transfer (chasing the dragon) and Chinese ink. These pages can also be associated with the use of heroin. The texts on each “page” offer a stratification of signifieds. In most cases, they make use of aphorisms or stock phrases taken from interviews with artists found in magazines. The subtitle, The Path, alludes to a US television series set within a fictional religious movement known as "Meyerism", a thinly veiled reference to Scientology and the cabalistic deviations of certain sects. Between the superficiality of globalising statements and the mirage of misguided beliefs, Paul Paillet poses the question that torments our Western societies, that of the unrelenting search for the ideal place, for unconditional love or even for one’s "inner self", those contemporary dictates of a perfect life. This quest for hope transformed into a marketing product fosters a voracious capitalism that commercialises everything.

Paul Paillet continues his exploration between the lines of this dictatorship of happiness in a more candid or vintage way with the song Coimbra (1930) by José Galhardo, one of the first international radio hits. The French version Avril au Portugal (1947) written by Jacques Larue, was sung by Yvette Giraud in the 1950s and was set to lyrics by Jimmy Kennedy (1947) for the English version April in Portugal. Some of its verses are reproduced in French and English in the publication BRUME BOURGEON BRISE SOLEIL (ed. CEC, 2020). This booklet is also inspired by the novel Les Météores (1975) by Michel Tournier, relating the separation of a pair of twins, one of whom sets off on a journey in search of his double and himself. Here again, we find the theme of initiation and the path towards the discovery of one's identity.
This everyday scene is accompanied by a discreet soundtrack, emanating from a reproduction of the makeshift and royalty-free radio, the Tin Can Radio (1965) by designer Victor Papanek, which will be broadcasting Wings, an extract from a clip by the world-famous K-pop boy band, BTS. This extremely basic radio, made from a tin can and a candle, a kind of ecodesign ahead of its time, was used by UNESCO to help bring certain peoples out of their isolation, especially in Indonesia. Papanek wanted it to be free of design or any reminder of Western technology or aesthetics. This small DIY transmitter with its humanitarian aims, which came out of an era of illusions, will broadcast this famous BTS hit. The irony is in this crossover between the alternative spirit and utopia of the 1960s and the sanitised, futuristic look of this group, which by means of an intellectual somersault and a huge misunderstanding, maximises its influence and profits by exploiting the theme of adolescent identity crisis, going so far as to refer to the novel Demian by Hermann Hesse.
This paradoxical combination of sweetness, romantic songs and the immaculate whiteness of porcelain, and a hidden threat - drugs and commodification - seems to traverse all the artworks making up this breakfast, oscillating between belief and disillusion, pleasure and toxicity, in which each form of love or paradise turns out to be deadly, where every attempt at emancipation and autonomy is threatened by the voracity of the market, a subtle expression of the system of the creation of surplus values, the exploitation of desire and the fear that endlessly fuels an invasive, hysterical and perfectly irrational capitalism.