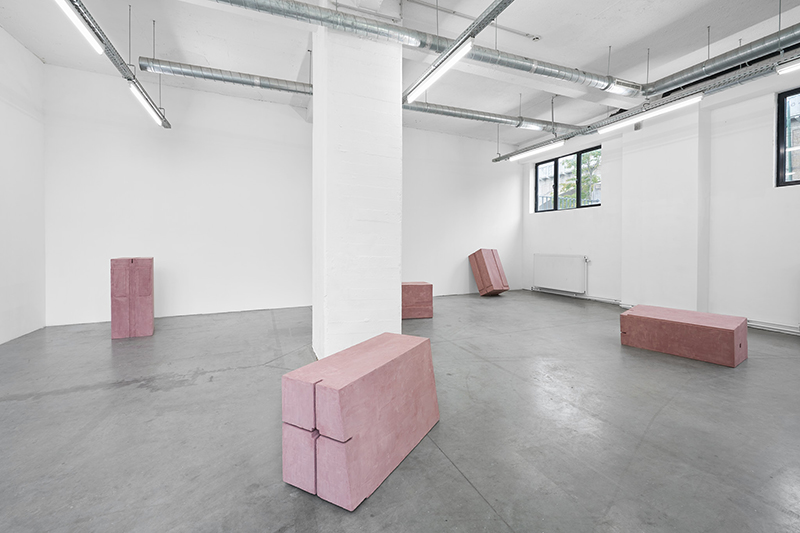 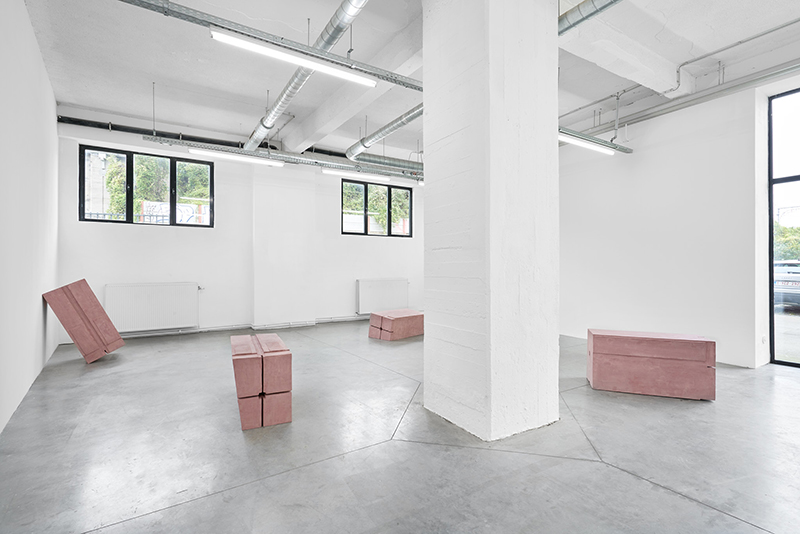 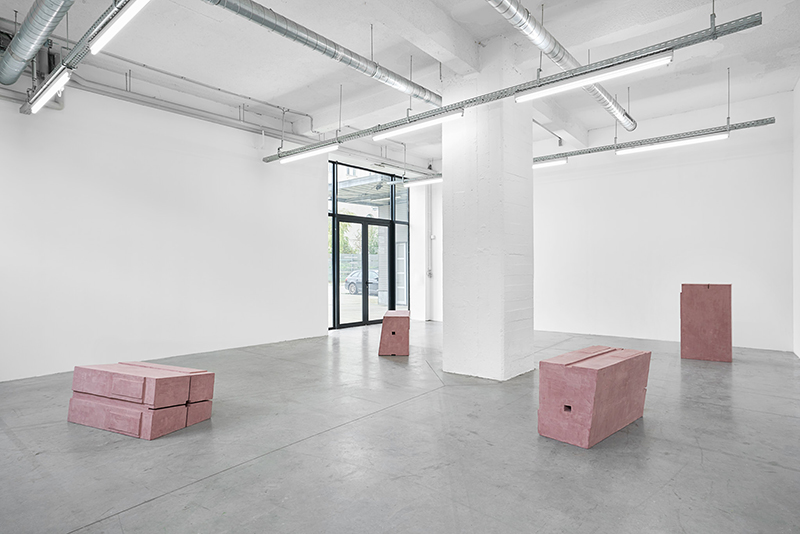 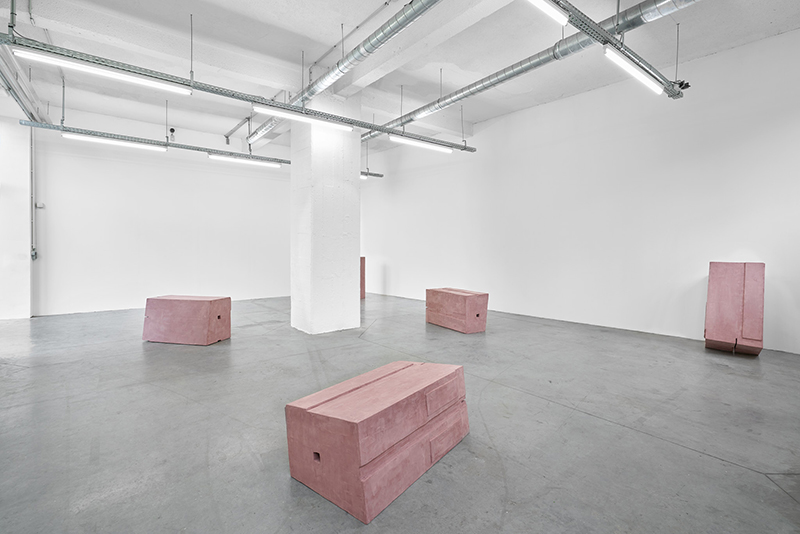 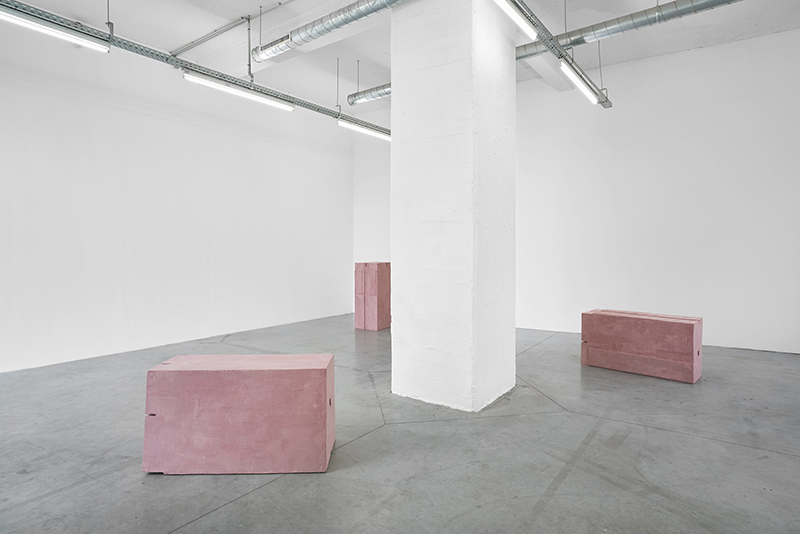 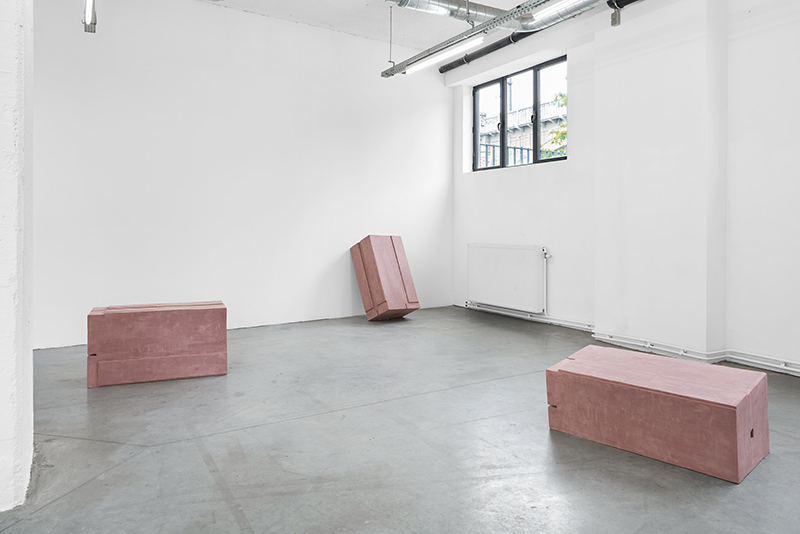 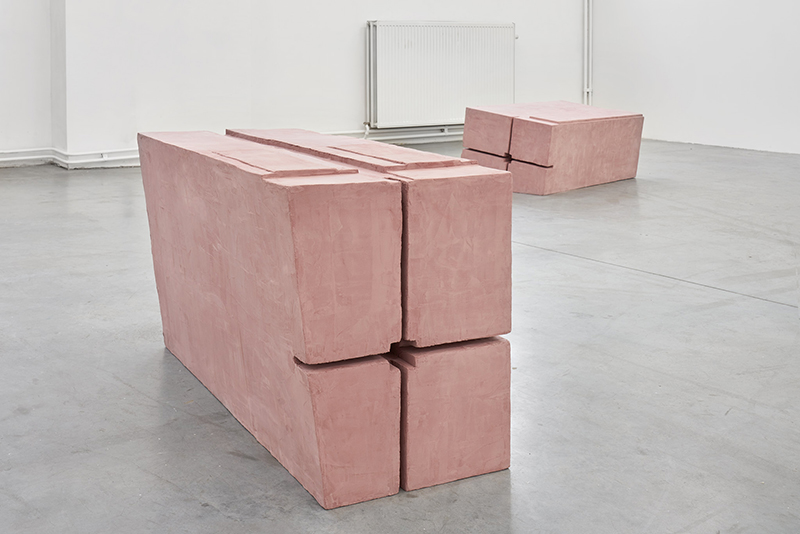 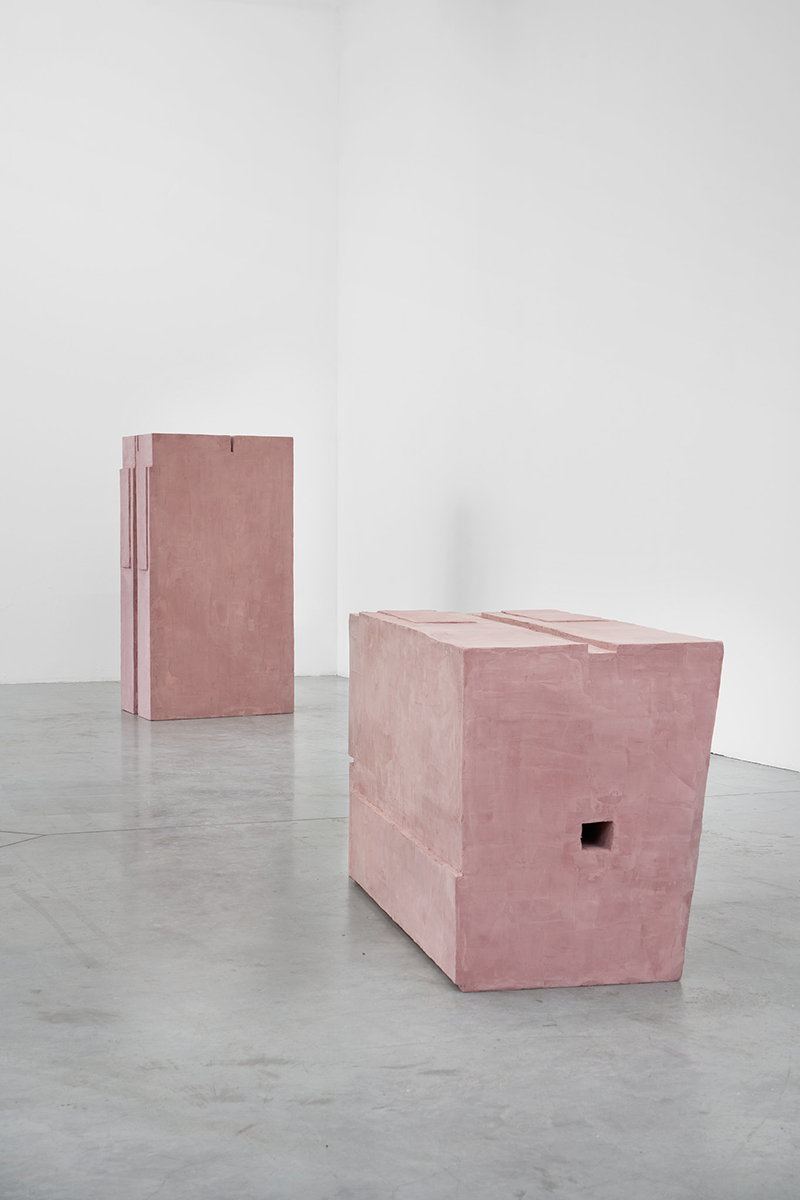 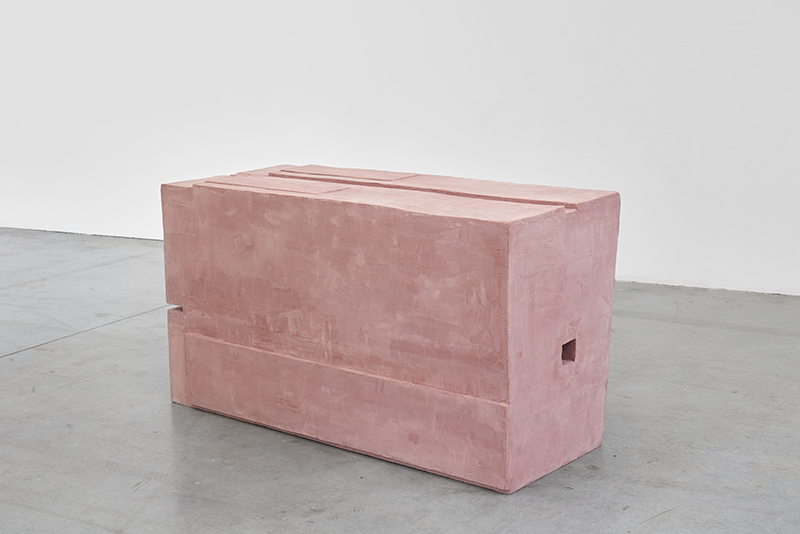 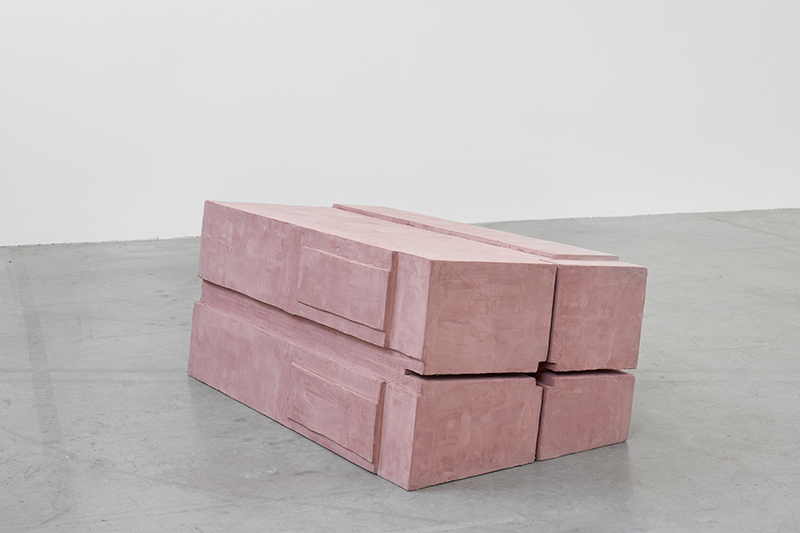 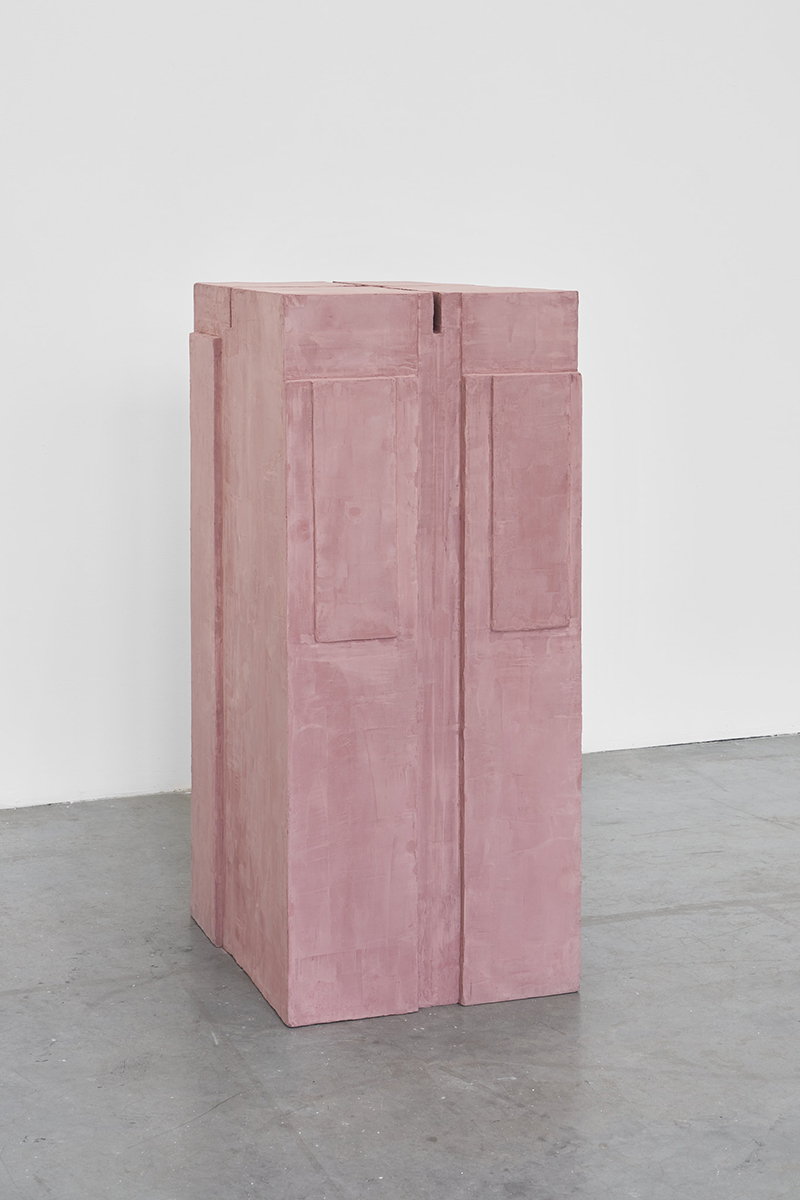 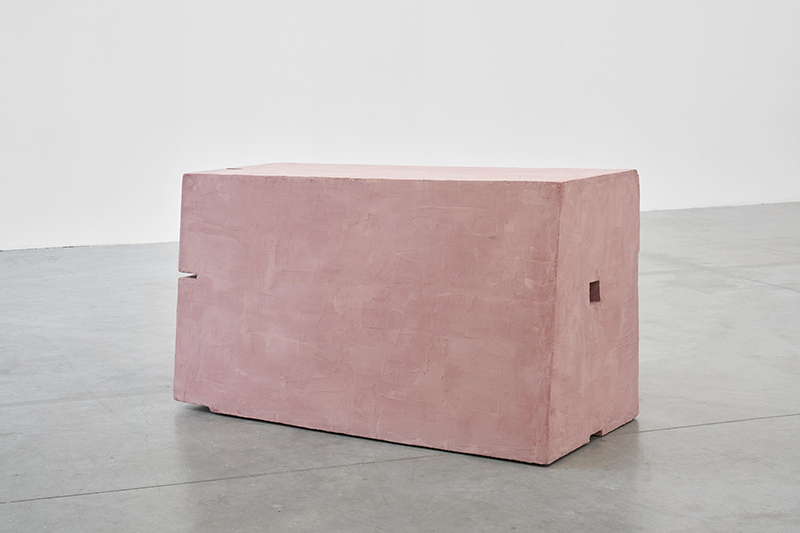 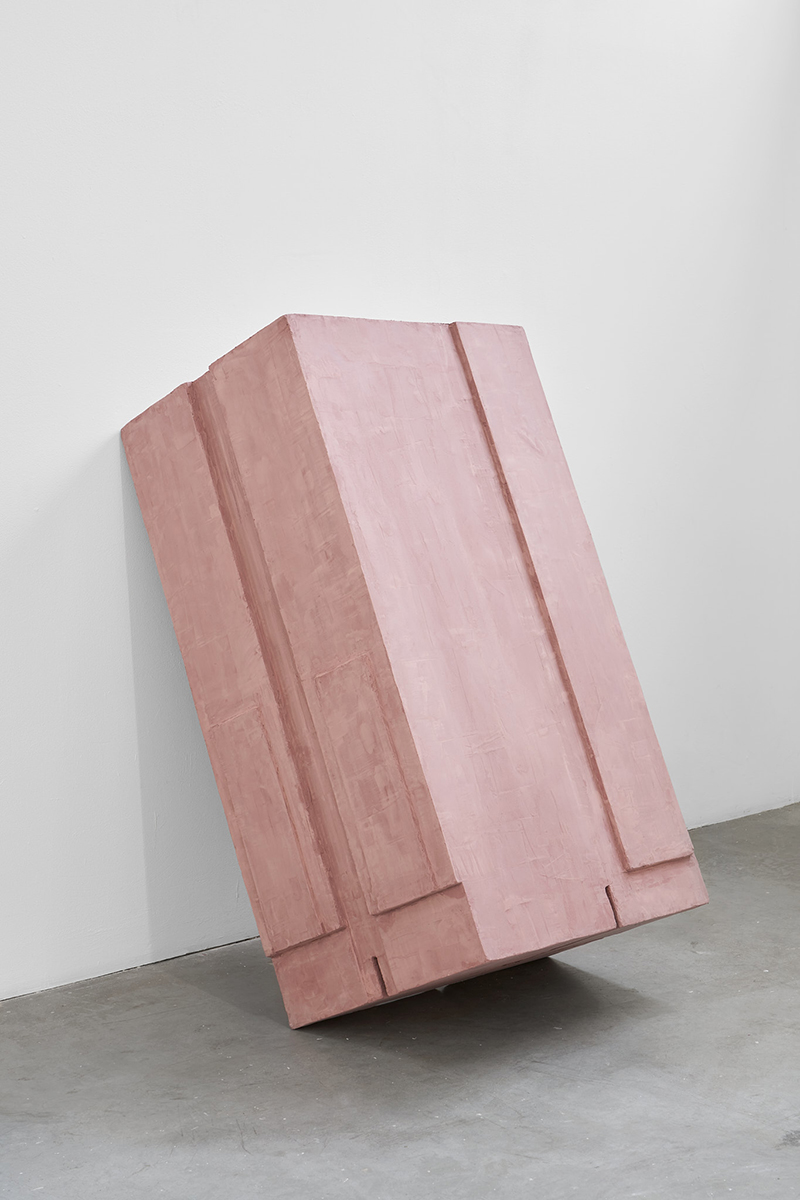 Extrudates (detail) Polystyrene, glass fiber, stopping, pigment 115x60x45 cm each
Photography: GRAYSC
All Images courtesy and copyright of WIELS and Markus von Platen
You probably know that to extrude is to push some material through a hole to obtain a desired form. Think of a round bar of aluminum pressed into a square-shaped hole. The bar becomes a desired, square-shaped bar. I would like to cut this metaphor in half, this thought experiment, so to have an extruded electric signal on the one hand, an extruded foam piece on the other. Bear with me.
When I first met Markus, it was at a birthday party on top of a hill in Brussels. He told me many things about modular synthesizers. He has one of these machines, which does nothing but to squeeze an electric signal through some holes so it becomes a desidered sound. You might wonder how you could possibly squeeze an electric signal through a hole. I am no engineer but I know that modular synths do have holes, outlets, vacua through which things go, at least metaphorically.
Something fishy is going on between the expression “desired sound” and modular synths though. During the same conversation in Brussels a couple of years ago, Markus pointed out to me that the electrical signal is manipulated into a rather unplanned result. It is like pressing the aluminum bar into a hole whose shape you don’t know but you might accidentally like, or really hate. I find this randomness scary and exciting at once. Markus recently mentioned an allegory to me, one in which the sound of modular synth is like water entering a car that has crashed into the ocean, slowly seeping in, until gravity drowns it into darkness.
I like to think of the sculptures in this exhibition as extruded objects. To make things clearer, you could bring back the aluminum bar above, and imagine it pressed through a hole; except what comes out is really off. The hole is as large as the room, it is the room here. The extruded objects look just about the same as the room-hole, except much smaller. Markus squeezed them there, skewing scale. It is like you toss a tiny coin in a lake and a 10 meter vortex appears in the water. Scary, exciting and rather unplanned. These sculptures have similar features compared to the hole from which they come. They are also randomly different.
Have you heard of Don Buchla? He was a Californian engineer in the sixties. He really helped shape modular synthesizers, and really hated piano keyboards. He said that sticking to musical instruments from the middle ages in the era of machines was pretty dumb. He embraced the uncontrol of the extruded electric signal, which for sure could not be tamed into melody and harmony by use of B&W keys. Yet lack of piano doesn’t mean chaos. Knobs, holes, patches were forged into some kind of desired sound, some kind of shape. Perhaps Don Buchla thought of the metaphorical aluminum bar too.
If the sculptures in this exhibition space are extruded foam pieces, weirdly becoming undersized compared to the hole or room where they come from, arbitrarily colored, thought through only a bit, they might match some of Don Buchla’s forgotten dreams of music. On the other side of the equation, there is the modular sound as the squeezed electric signals you don’t expect, desired only to some extent, finally freed from piano. I recently learned that the products of extrusion are technically called “extrudates," a word that sounds like a real stunt to me.
Exhibition text by Piero Bisello
Tags Brussels, Lazy exhibitions, Markus von Platen, WIELS
Newer Post Older Post Home