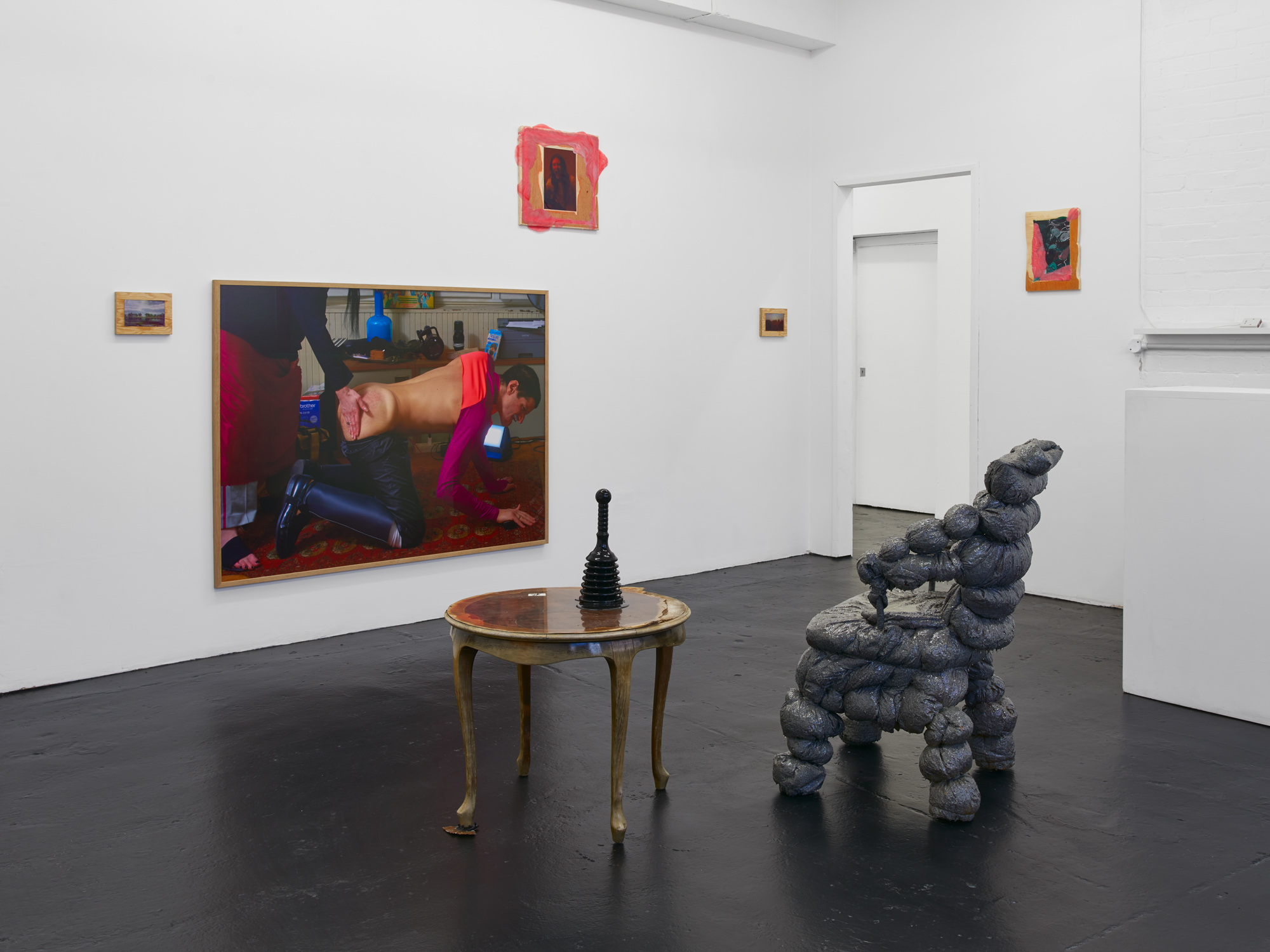 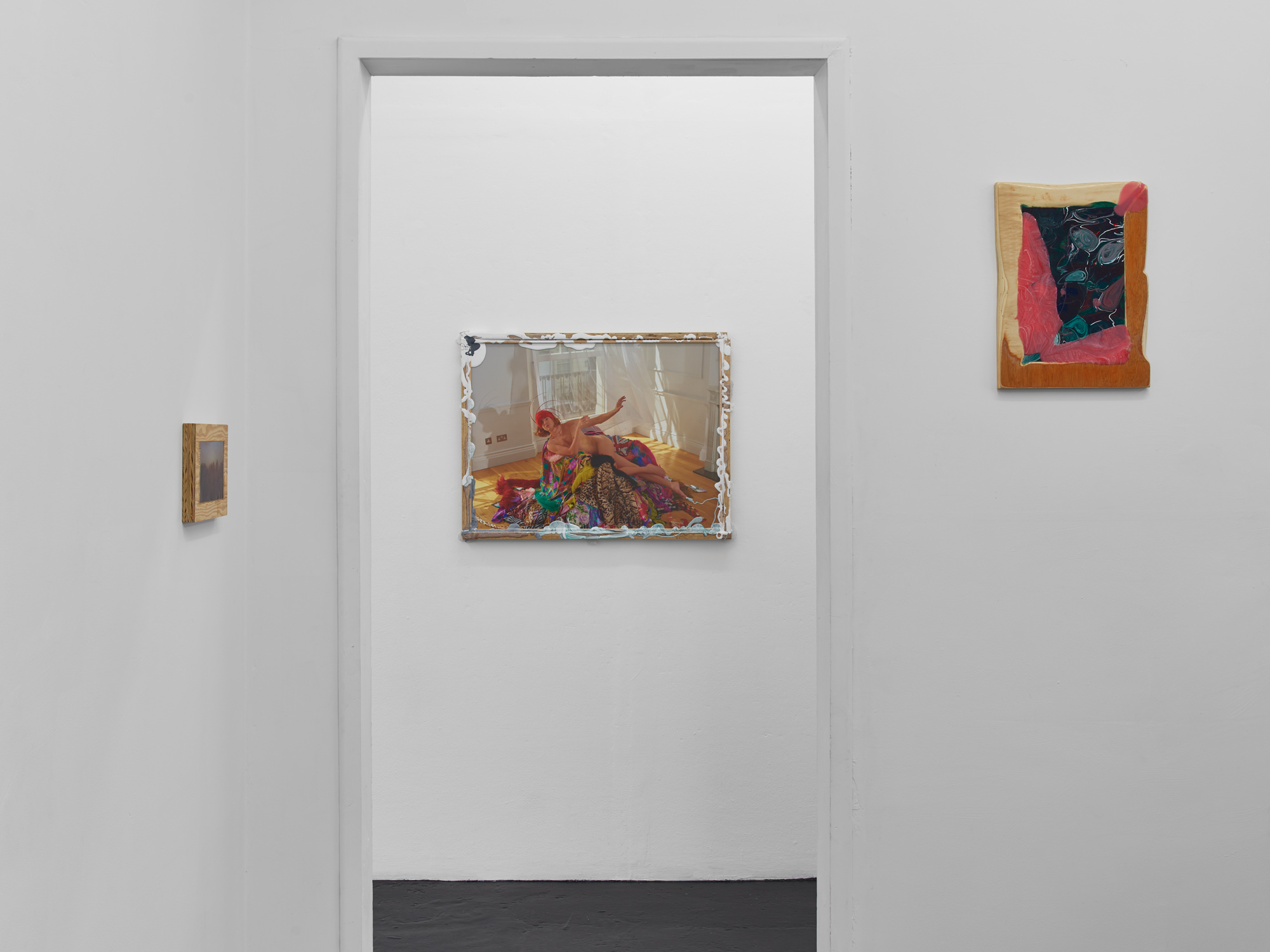 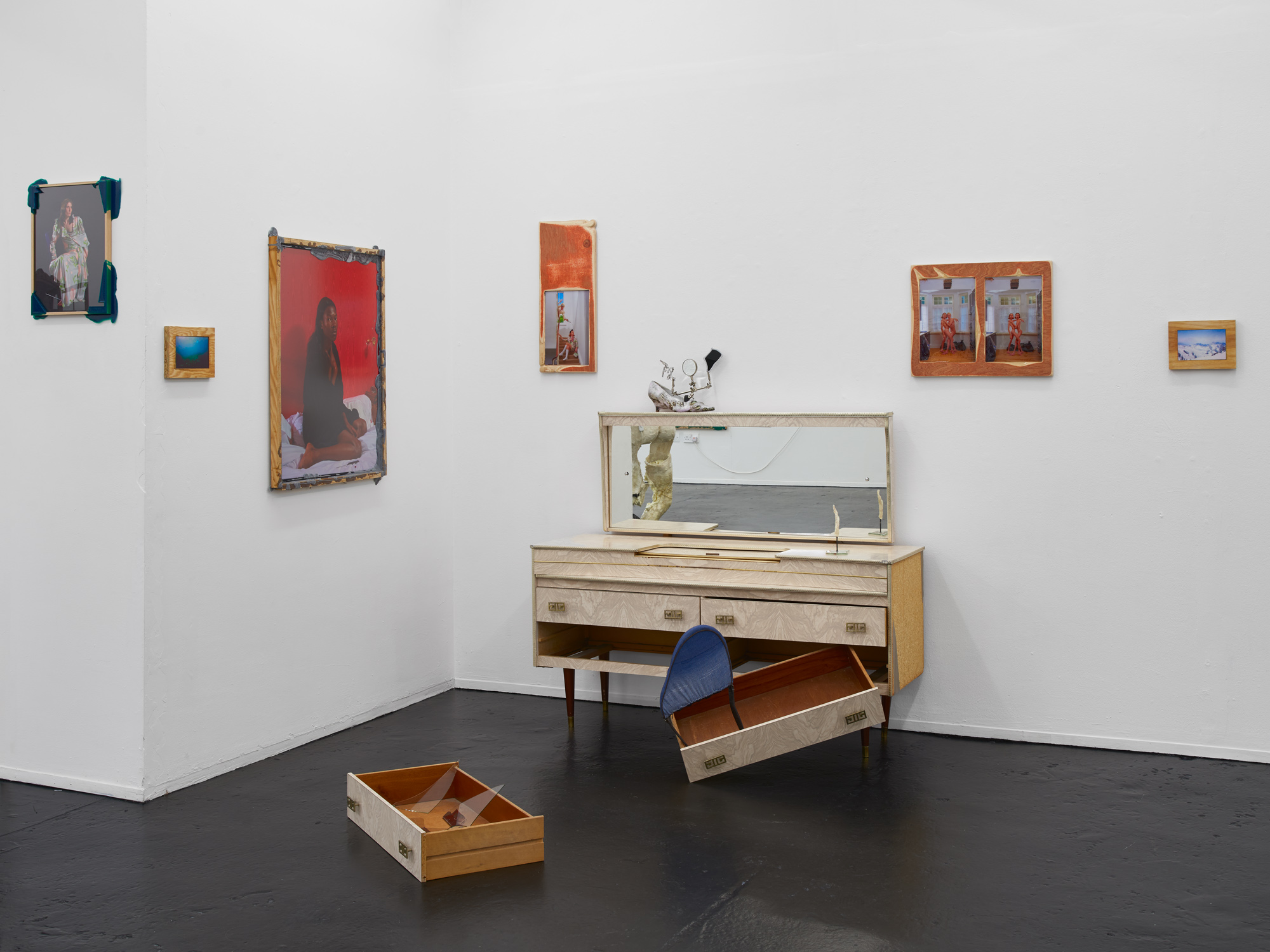 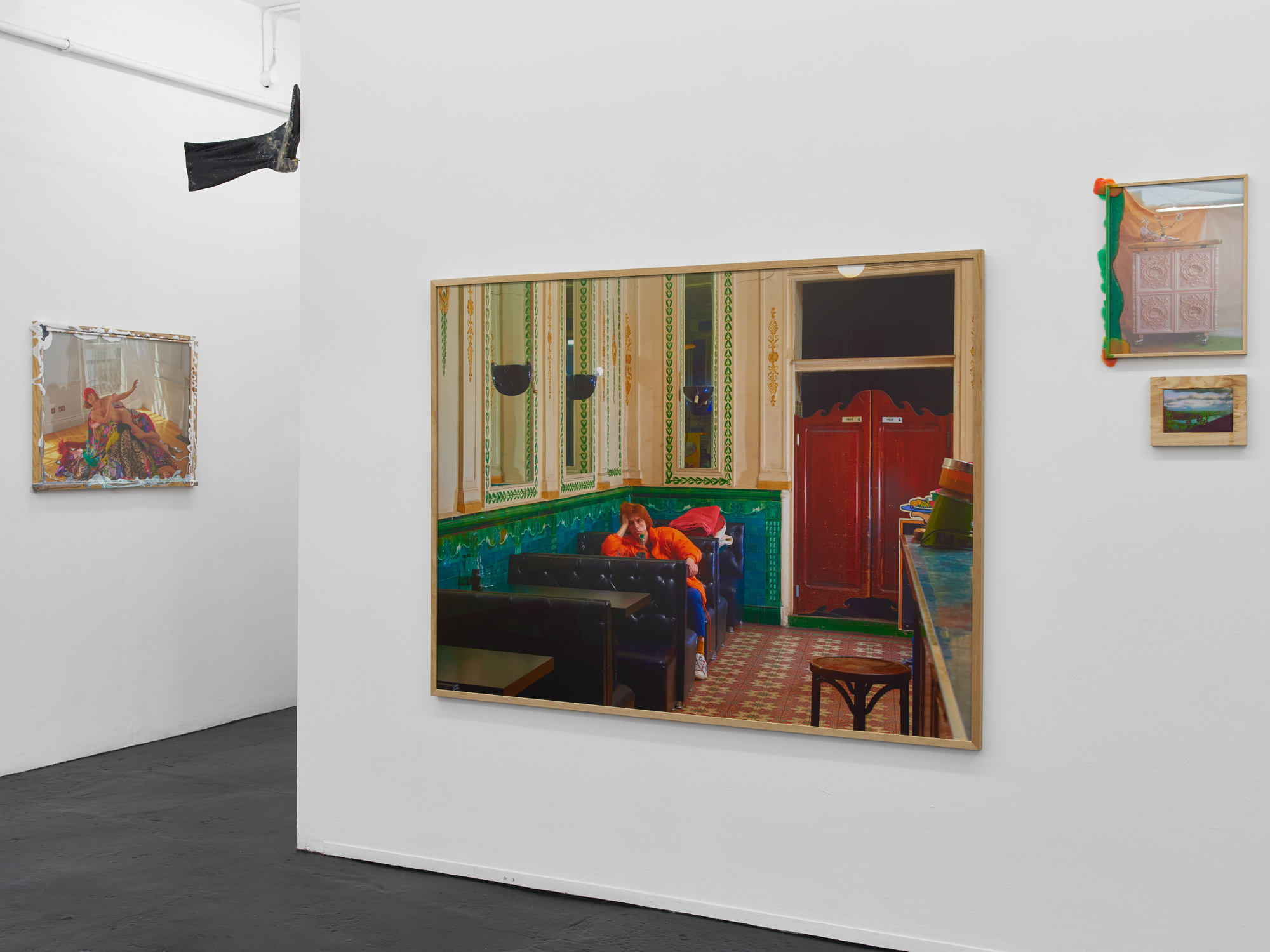 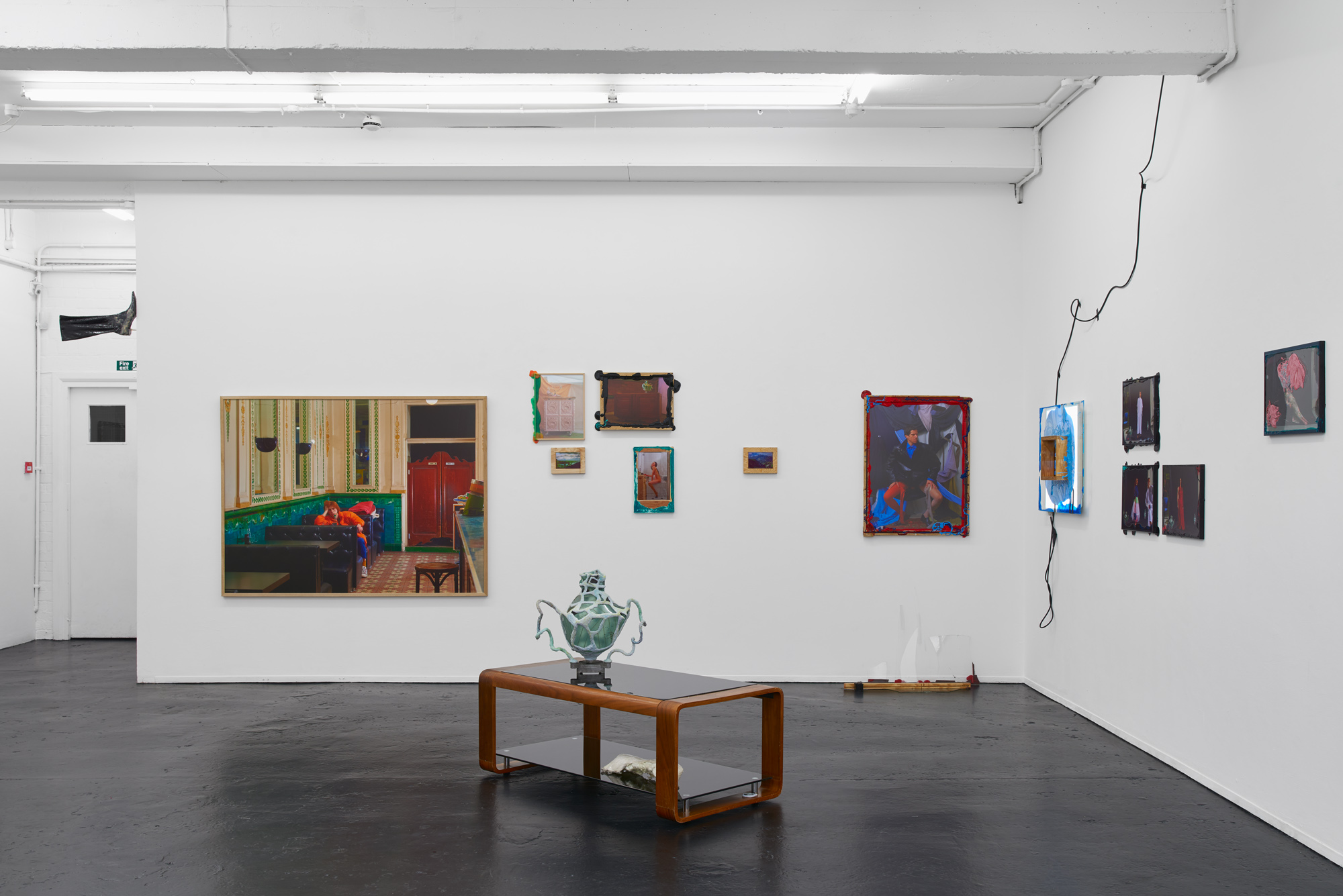 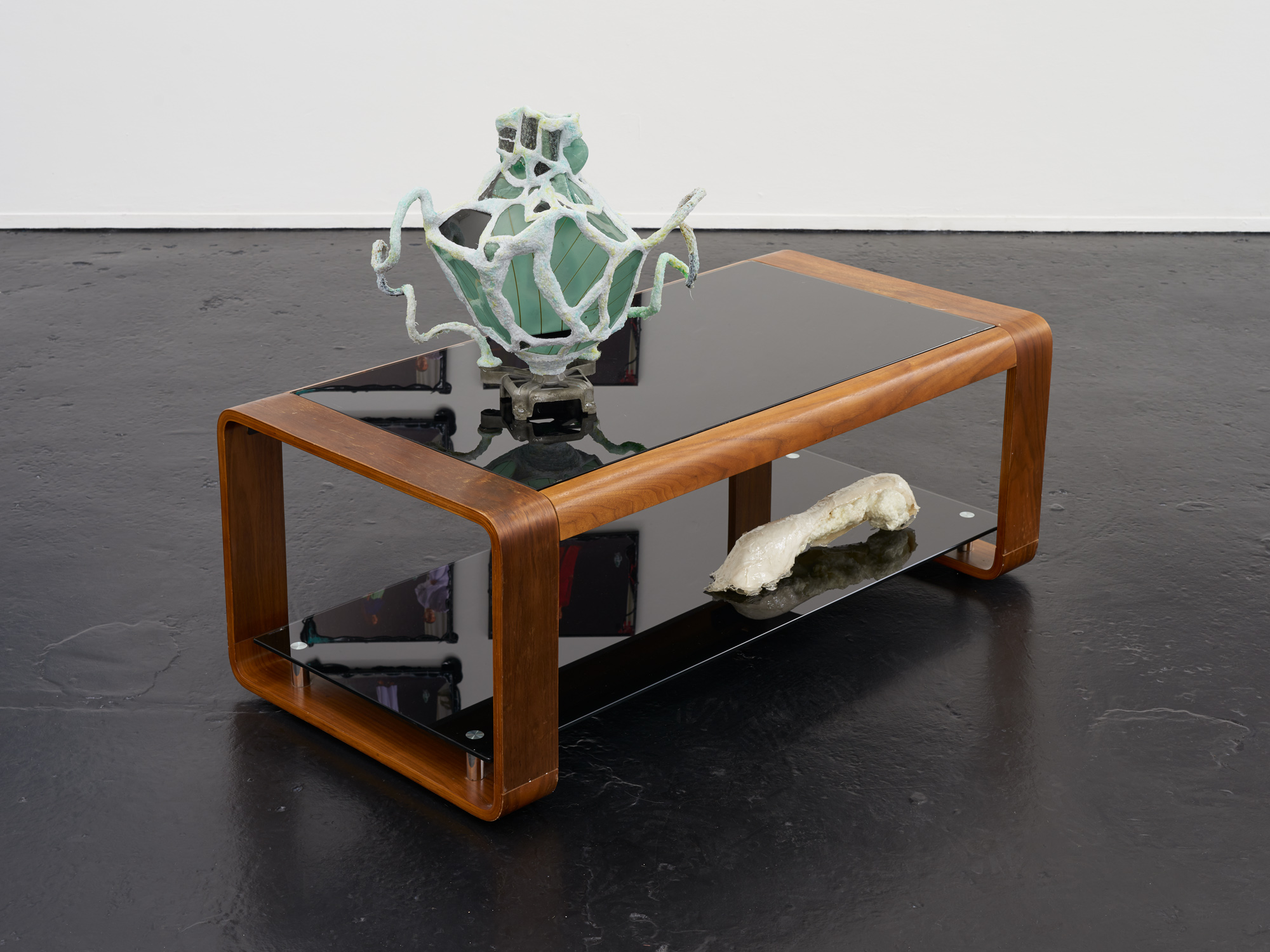 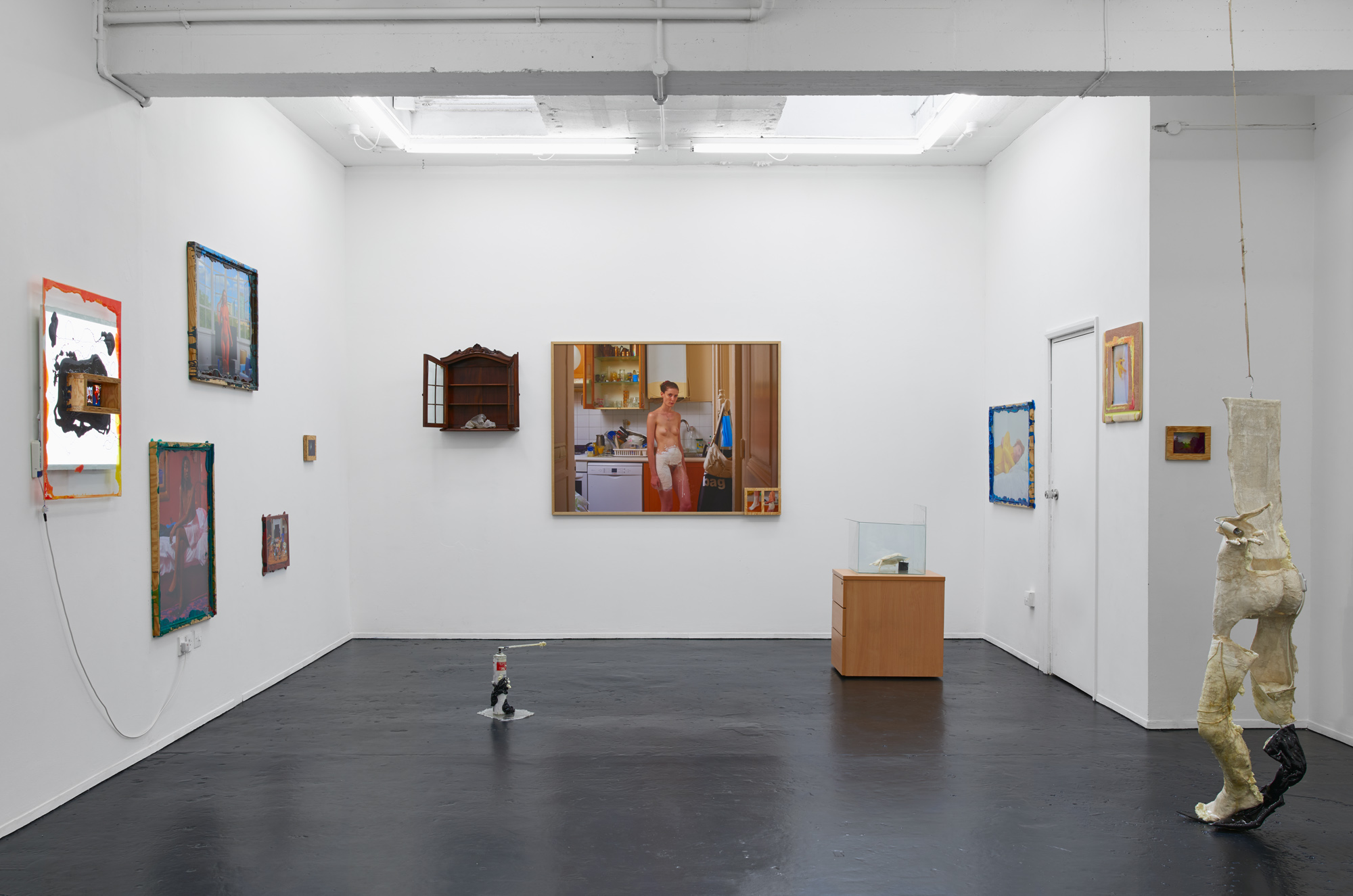 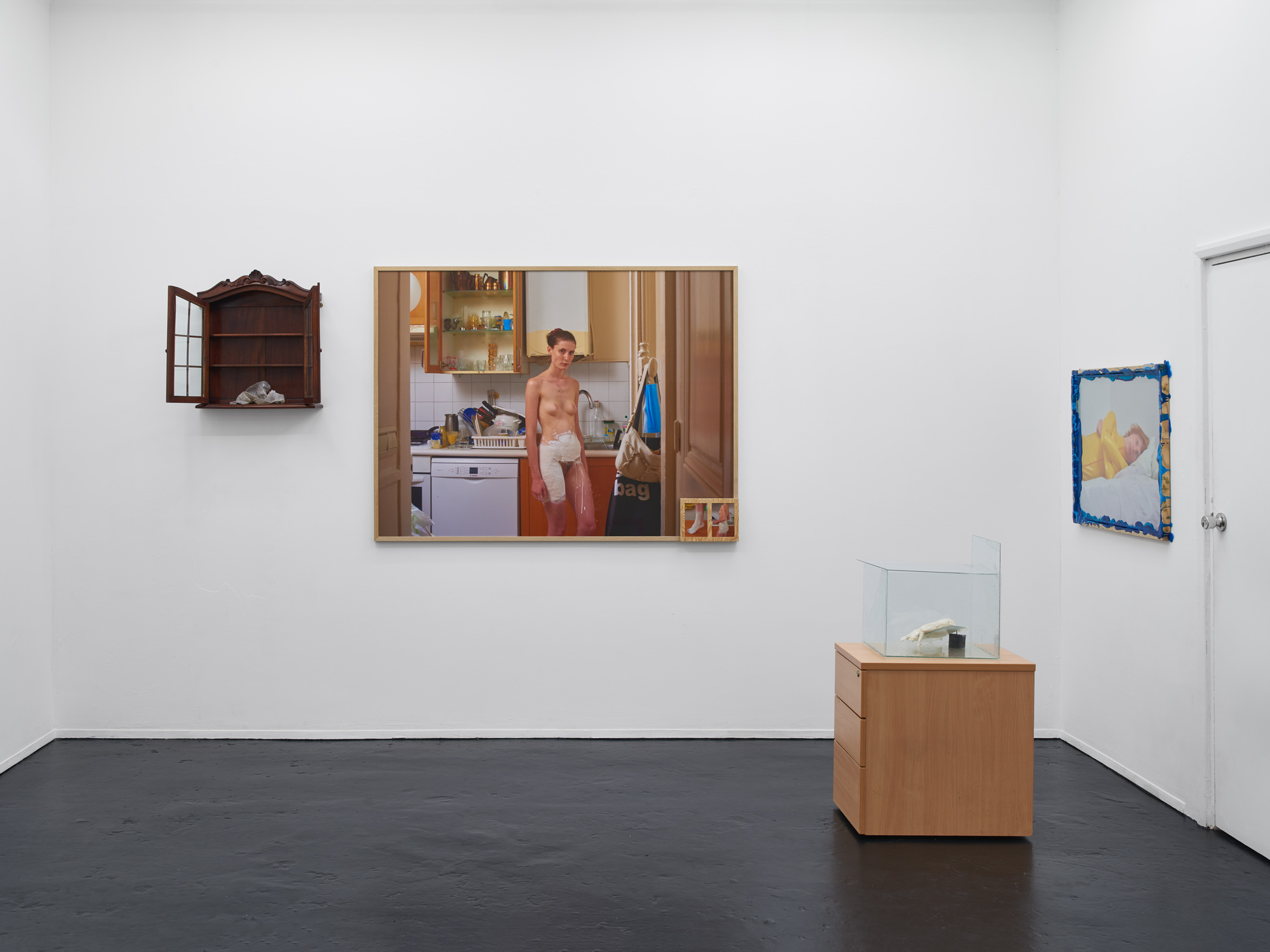 Room of Solitude, is the first solo exhibition of Boris Camaca (b. 1987), a Parisian artist who previously established himself as a leading fashion photographer and art director. A regular contributor to magazines such as Tank, Crash and Masses – as well as the co-founder of Télévision magazine – Camaca develops a singular, discernible aesthetics that combines heavy saturation of colours, humorous styling and an extensive use of narration.
Documenting a period of roughly six months – starting from the outbreak of Covid-19 in February 2020 –, Room of Solitude comprises seven series of portraits featuring relatives, friends, and himself. Photographs are presented in a variety of formats and materials, such as custom wooden frames or Cibachromes in lightboxes, which are displayed alongside sculptures and furniture created by Hugo Laporte and Salomé Poulodenny. Both intimate and exuberant, Room of Solitude explores themes such as reuniting with or separating from oneself, as well as the possibility of finding redemption through others.
All the characters are represented in enclosed, private spaces: Camaca’s own apartment in Paris, a lavishly decorated hotel room in Pigalle, a luxury flat in London, or a squat occupied by friends in Montreuil, near Paris. These different settings seem to be characterized by a mix of preparation and spontaneity, and so are the subjects' postures. In the Ambre, Hugo, Jade series, for instance, the artist’s friend and collaborator Hugo Laporte is photographed alongside his two sisters and pieces of furniture he designs. If the models’ solemn expressions and extravagant attires seem to evoke traditions of formal portrait [portrait d’apparat] in painting, the illusion of perfection and sophistication is disrupted by Camaca’s framing of the picture: people unrelated to scene, for instance, appear in the background, where the light projected by a neon interferes with the camera’s flash. Another picture from the same series shows Hugo maliciously escaping from the shooting while Camaca’s shadow appears in the lower right corner, conveying a sense of rawness and nonchalance. In the next series, Eleanor, Hugo appears again in the process of painting Eleanor’s body. By showing his friends and relatives as both models and active collaborators, Camaca plays with and deconstructs the figure of the photographer as an omnipotent gaze – demonstrating an equal attention to what he sees in his subjects than to what they see in him.
The artist punctuated each of the seven photographic series by a picture taken from Red Dead Redemption II, a video game set in the vast landscapes of nineteenth century America. Using his camera to shoot his TV screen at moments when the game was completely depopulated, Camaca created a series of vistas that evoke traditions of landscape painting and its role in expressing human solitude and desire for escape – the small dimensions of the photographs recalling the miniature paintings that could be displayed in private cabinets to provide an artificial window to the outside world. The ostensible disconnection between the Memories of a Territory series and the group of portraits is, in this sense, reconciled by the function of landscapes (and, in this case, virtual reality) as projections of the self into artificial, idealised spaces.
Exacerbated within a context of generalised seclusion, a simultaneous feeling of uncertainty and affirmation can be found in a series of self-portraits that Camaca made with Salomé Poulodenny. This group of photographs opens with a large picture representing the photographer being spanked while triggering the camera with his right hand, a gesture that reverses the ideas of the photoshoot as metaphor of a sexual intercourse (especially when considered from a male point of view). Whereas a form of symbolic violence is expressed here, it is imposed on the photographer rather on the model. Other small details are equally important: the shaving foam on Boris’ moustache (another masculine feature denied), or a box of masks, which recalls that the picture was taken during lockdown. In the same series, Camaca alludes to the history of pornographic photography by representing himself in contorted positions – phallic attributes exposed – but (quite comically) undermines his virility by deciding to show the intervals between the poses, during which his body is shown from behind and below, entangled in stockings and tights.
These self-portraits, I would argue, can be interpreted in relation to how female bodies are shown in other instances in the exhibition, with parts of their body covered in paint or cast in plaster, sometimes unveiling their sexual organs: a subtle inversion of the established codes in the fashion industry. The result is an almost complete absence of any form of fetishization, be it of bodies, clothes or objects. Indeed, the recurring concern of Room of Solitude might rather be negotiation: between identity and gender, composition and chaos, refinement and untidiness, tragedy and comedy, authorship and collaboration, etc. None of these dichotomies, however, are too heavily dramatized. On the contrary, they are somewhat treated with care and left unresolved. In this sense, if some of the characters are represented in a state of loneliness and seclusion (Dovydas, Arthur), this ‘solitude’ is shown as a state of exploration and acceptance, as a moment of productive introspection, and perhaps as an opportunity for change.