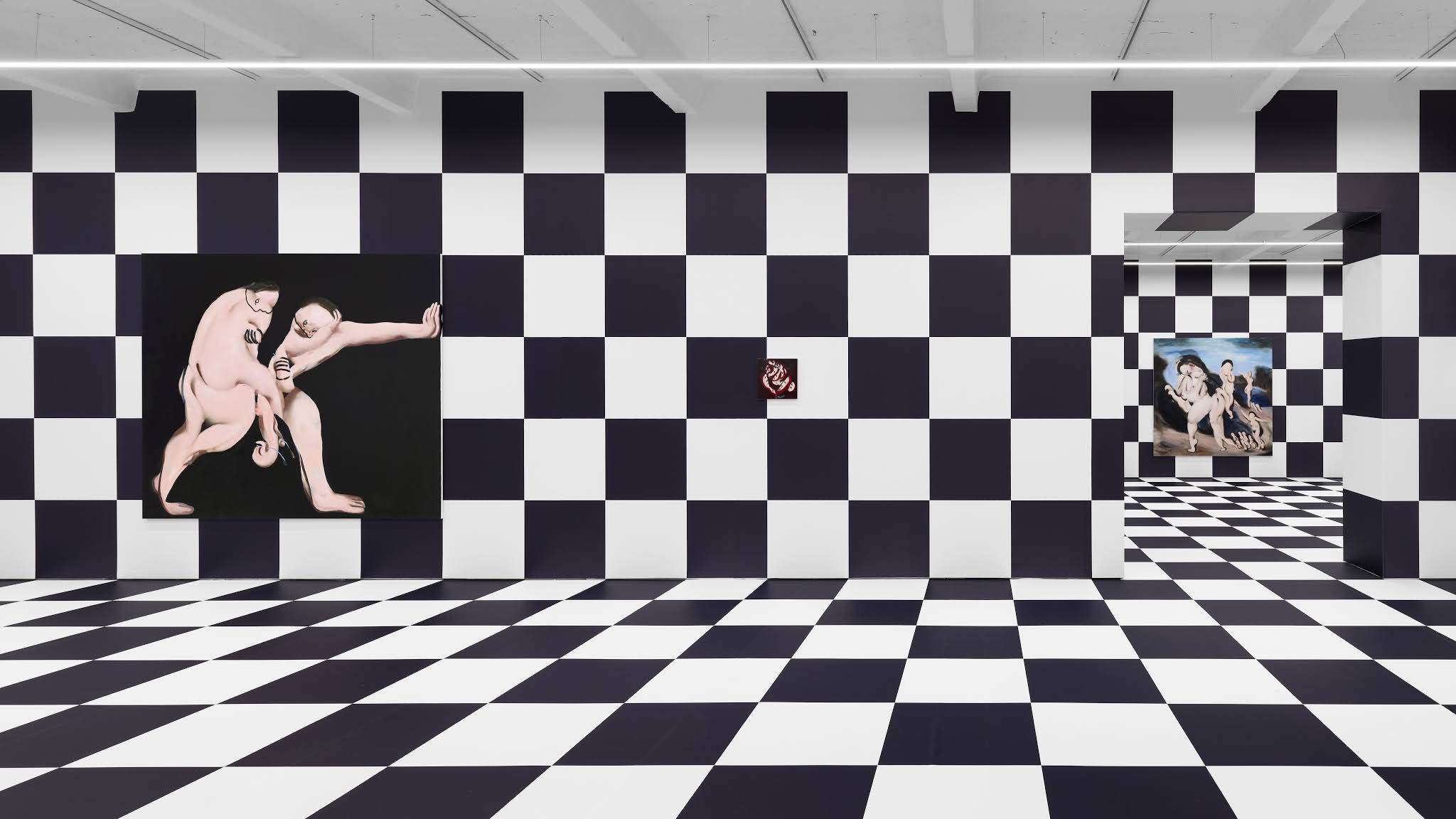 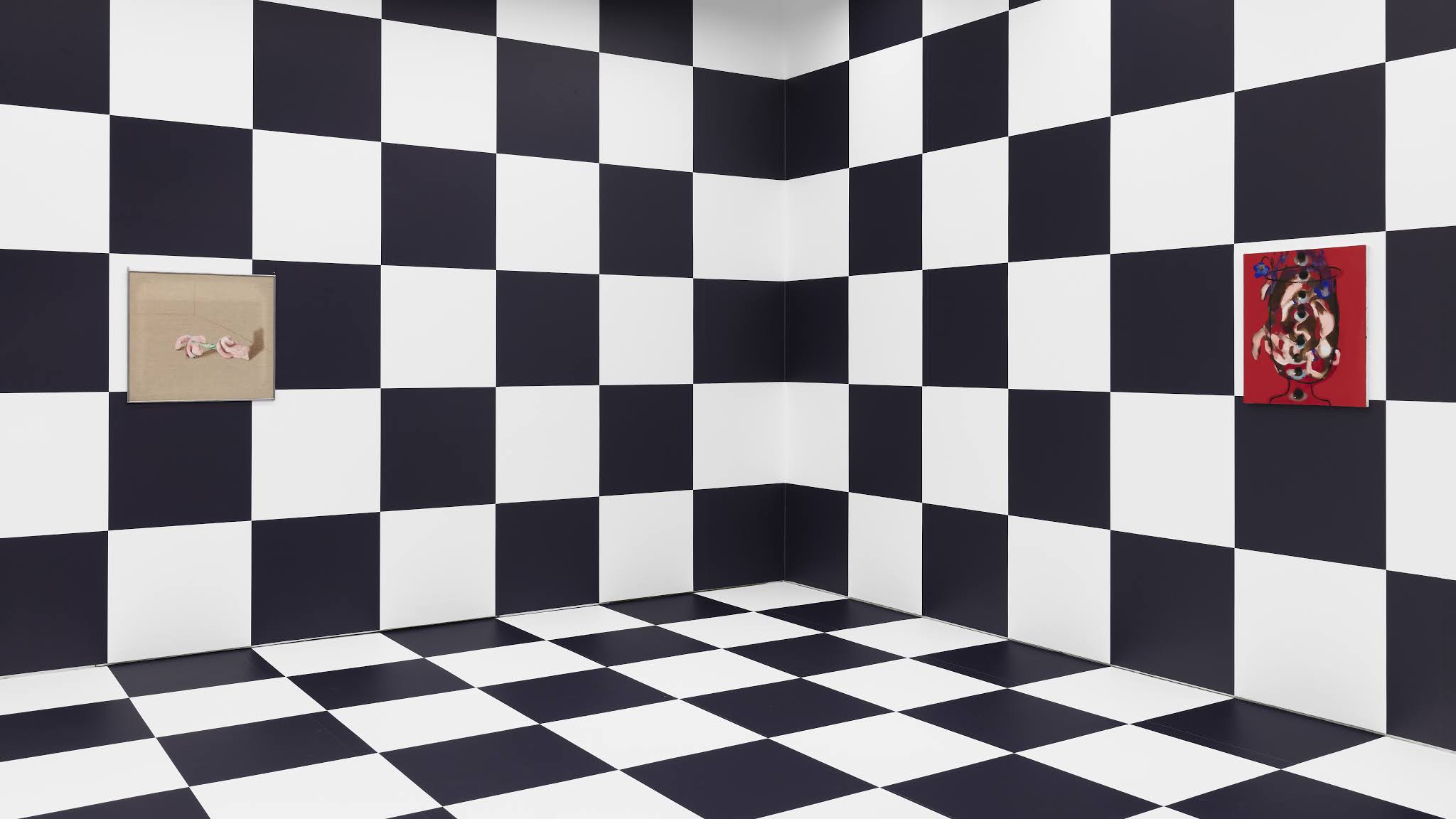 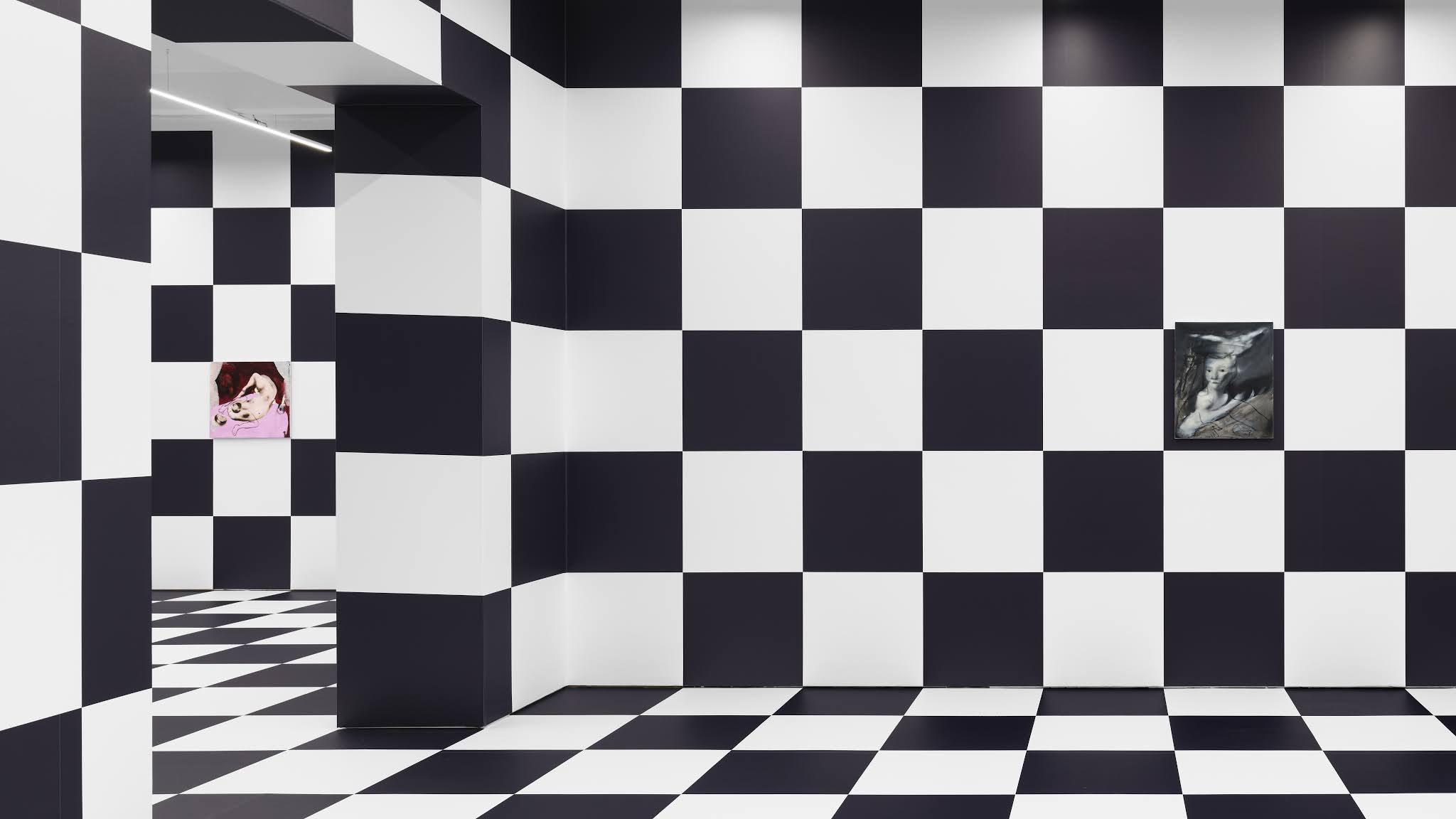 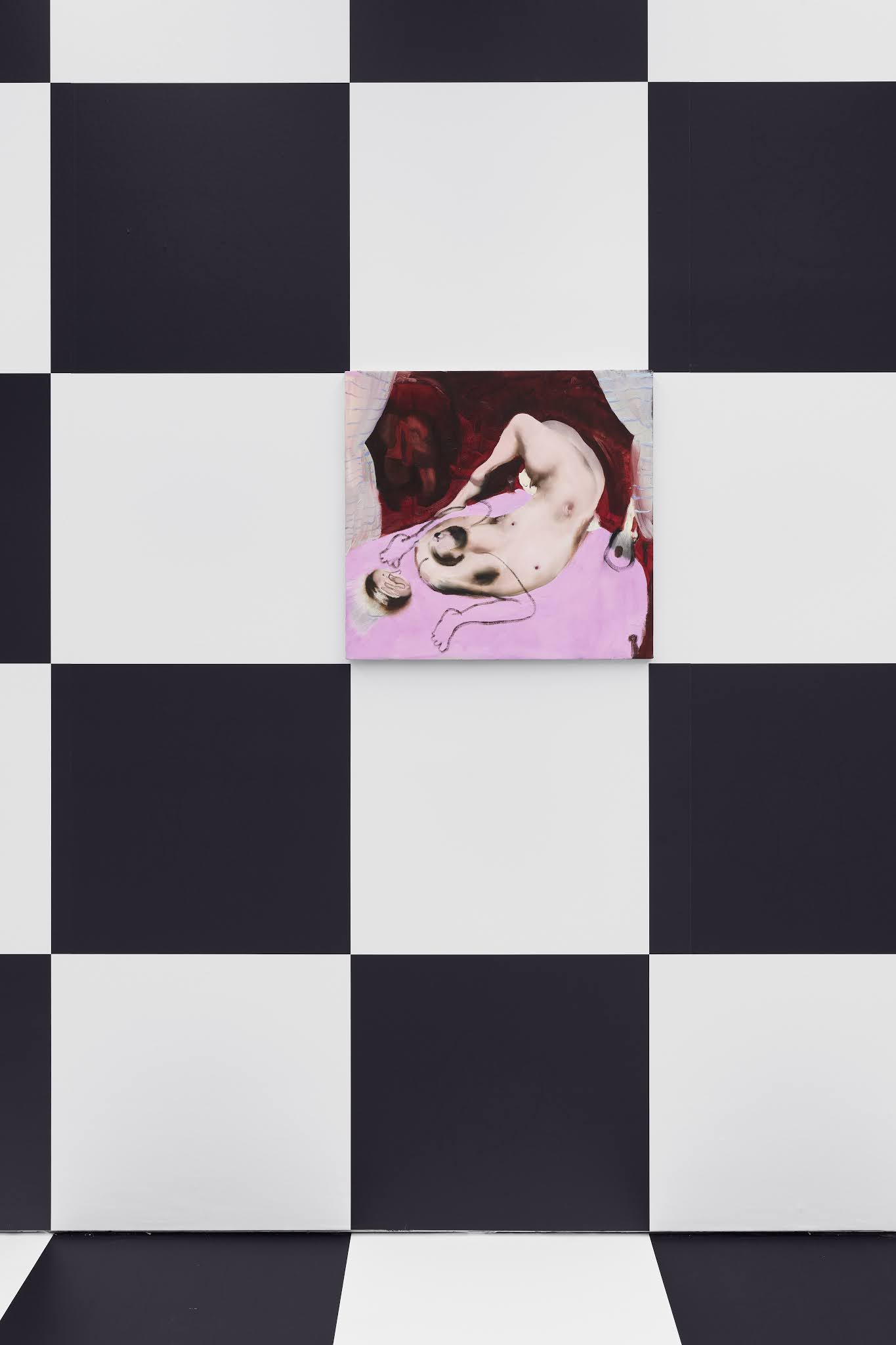 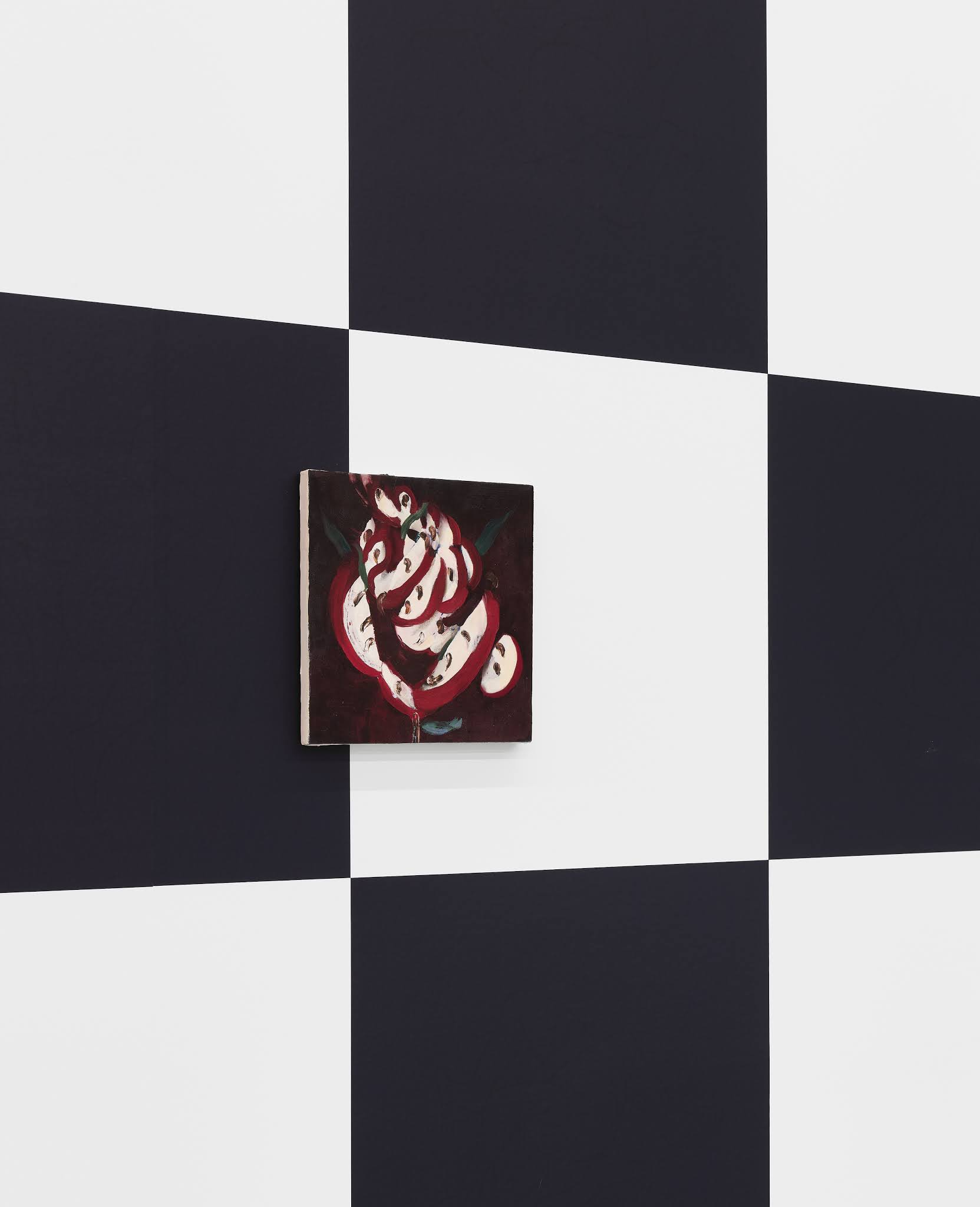 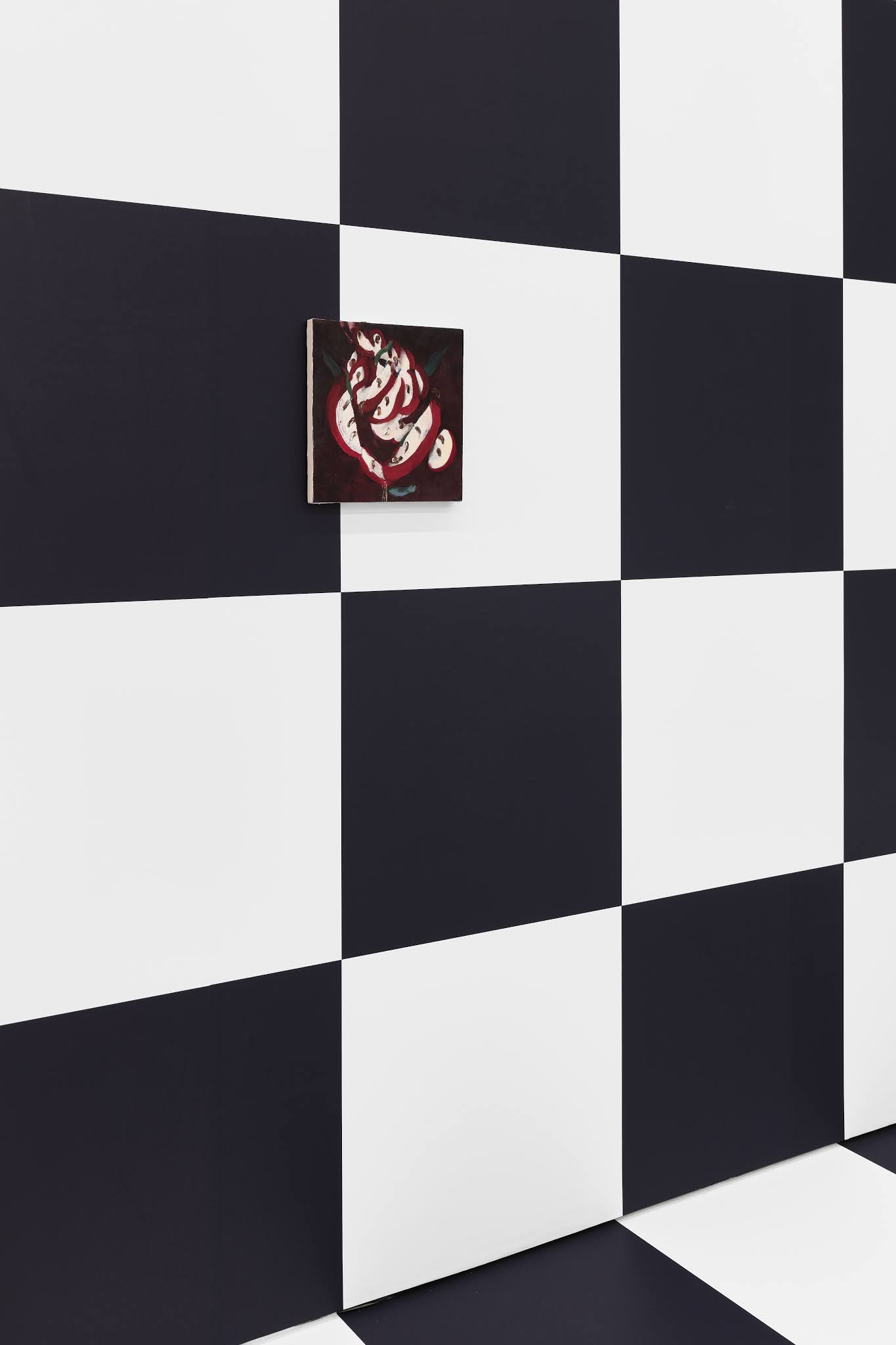 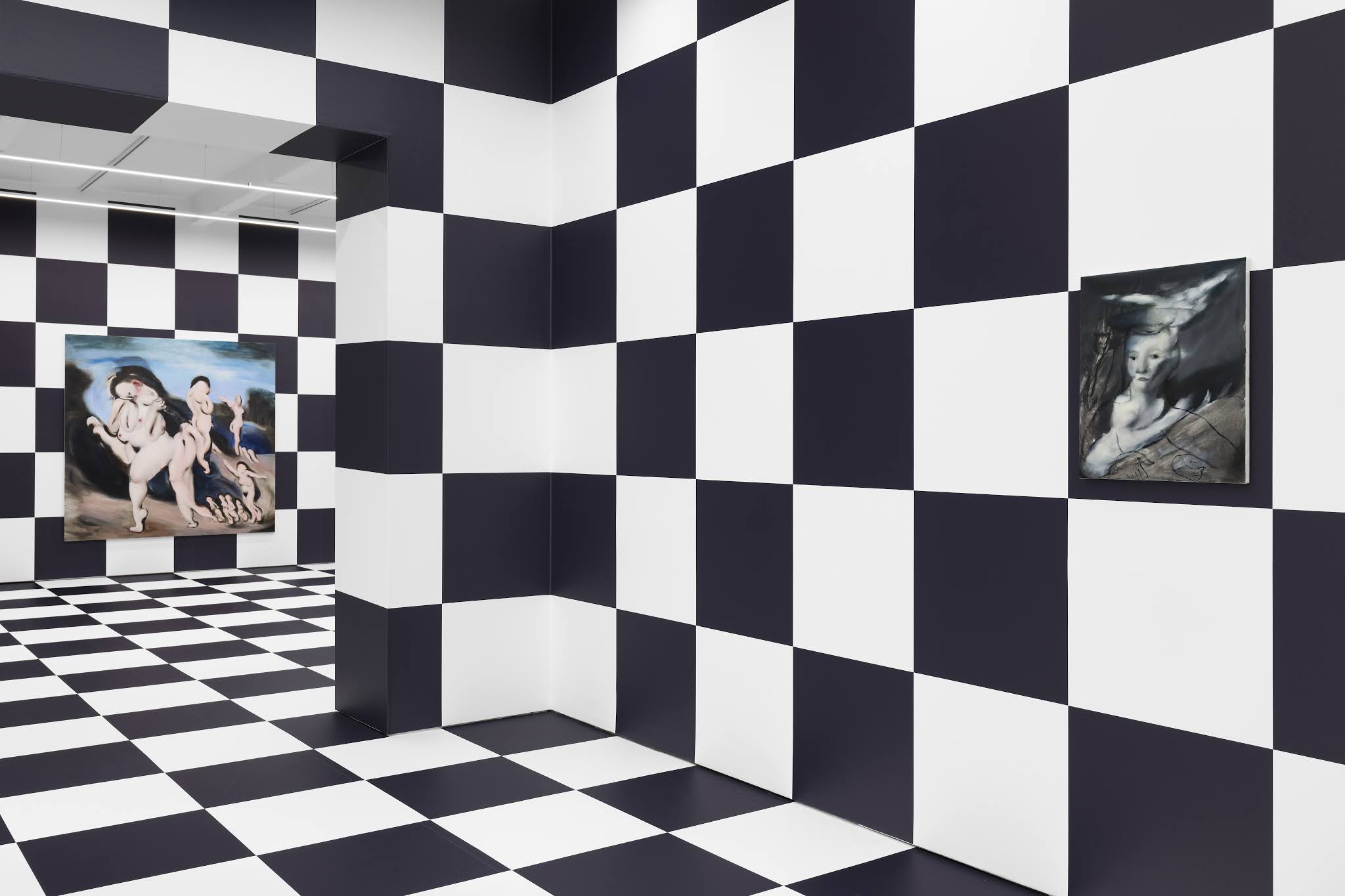 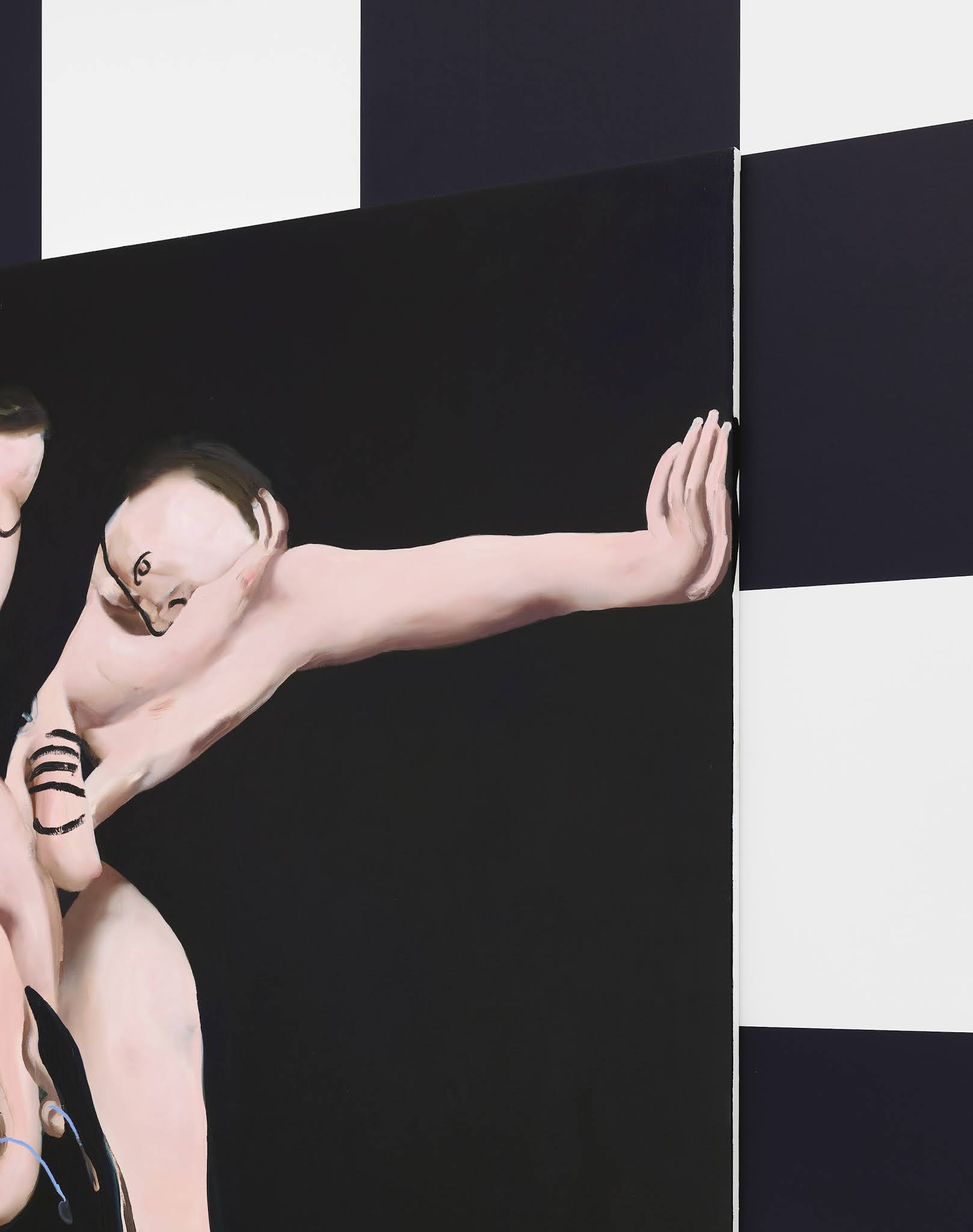 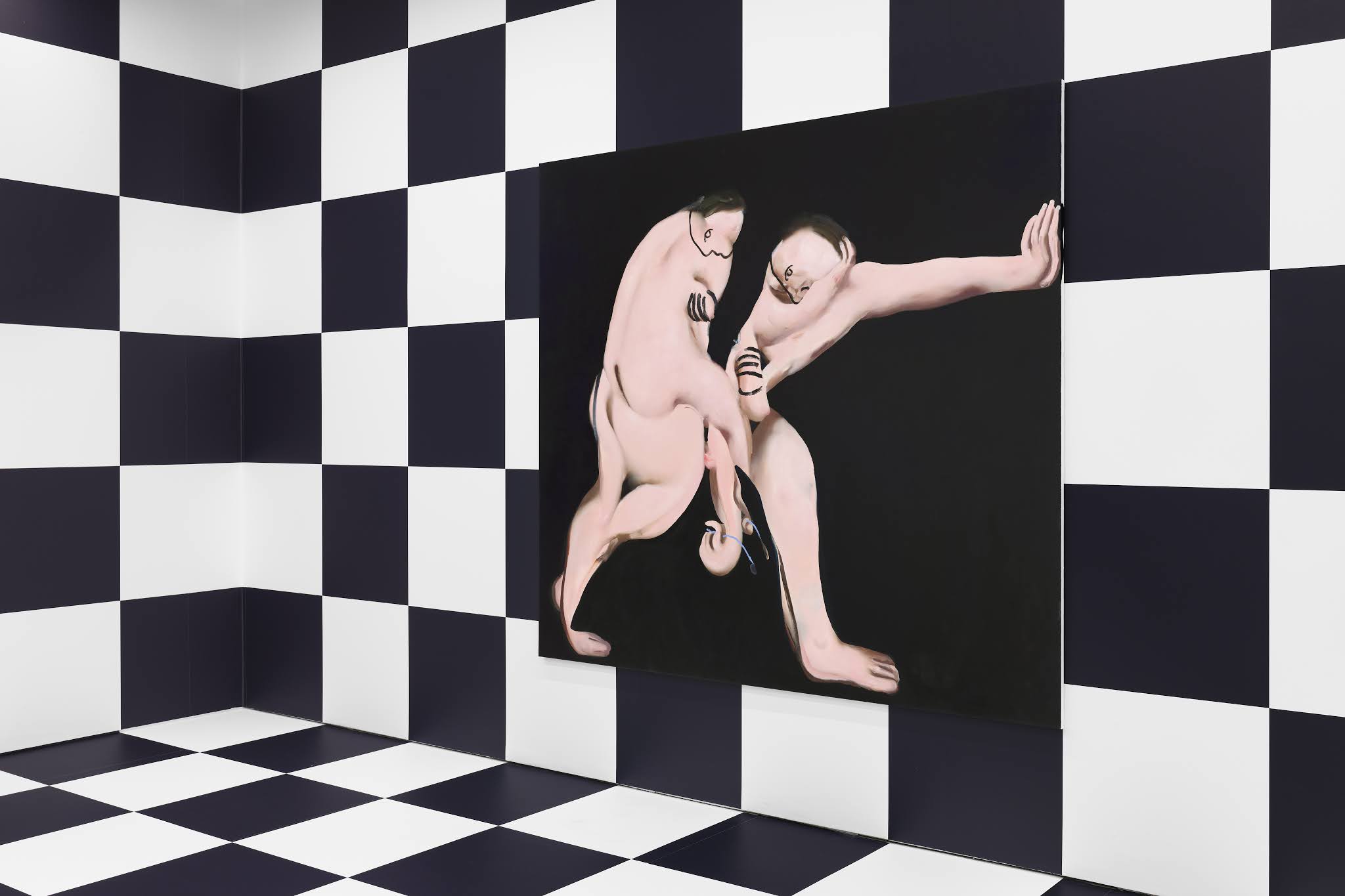 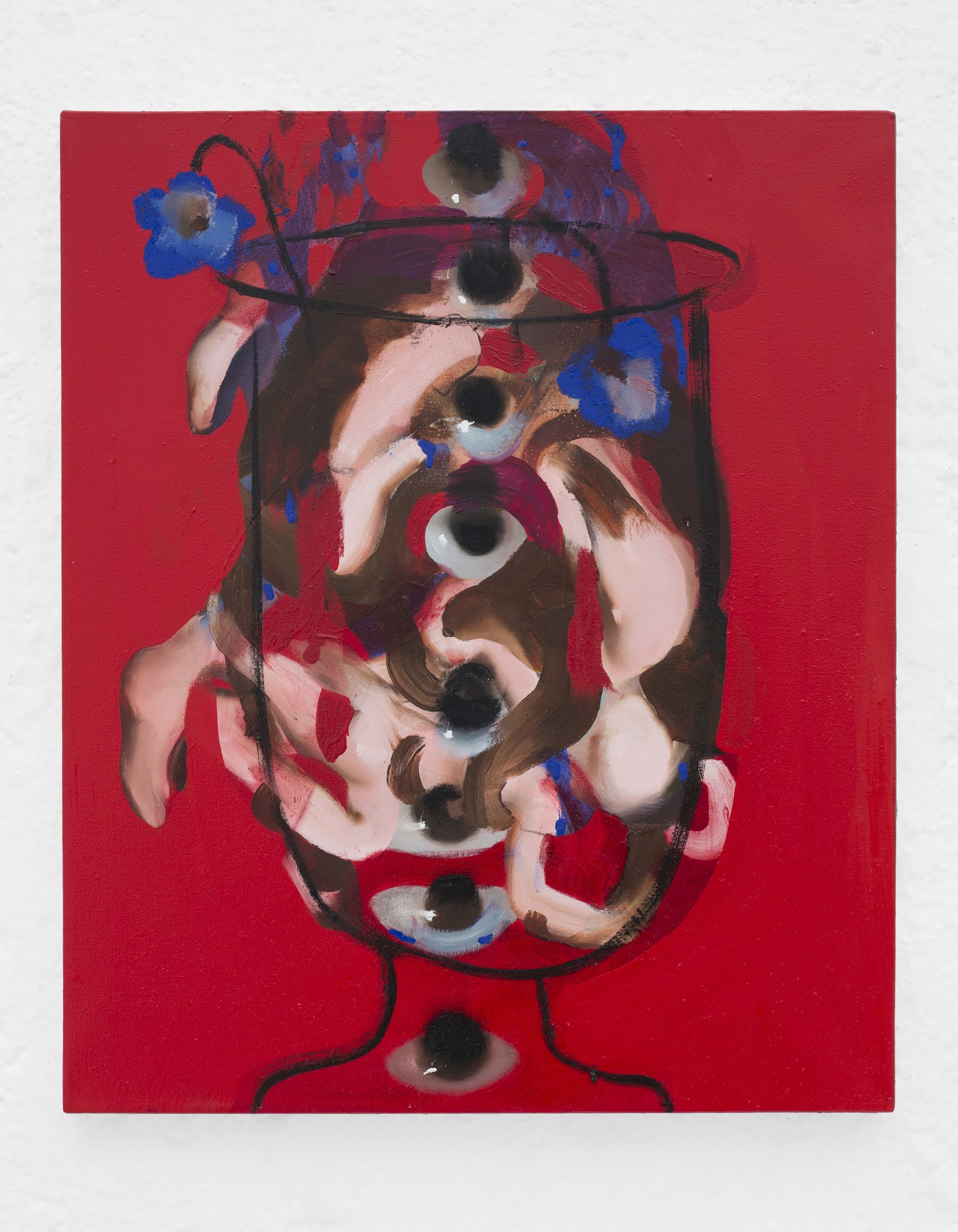 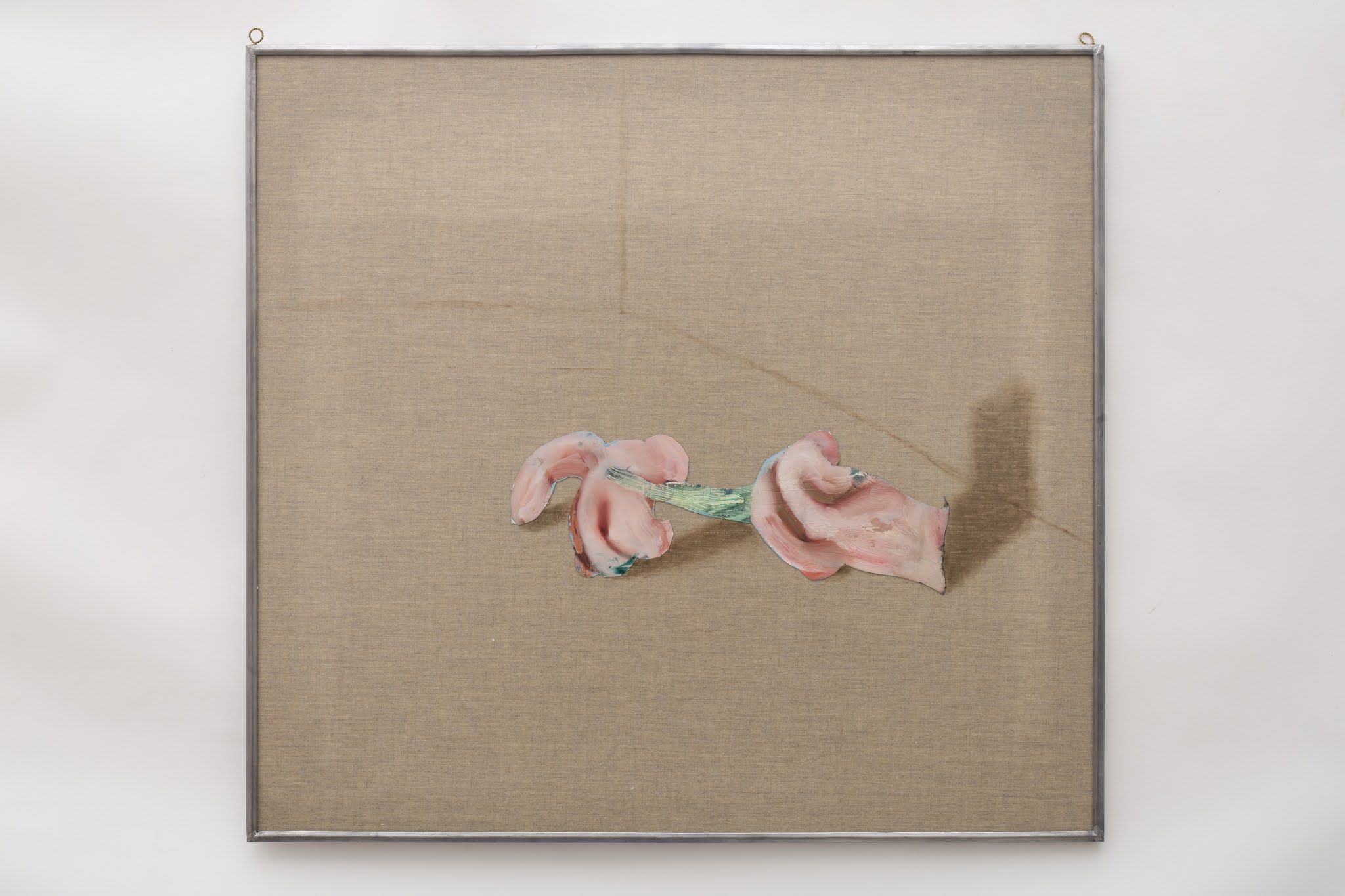 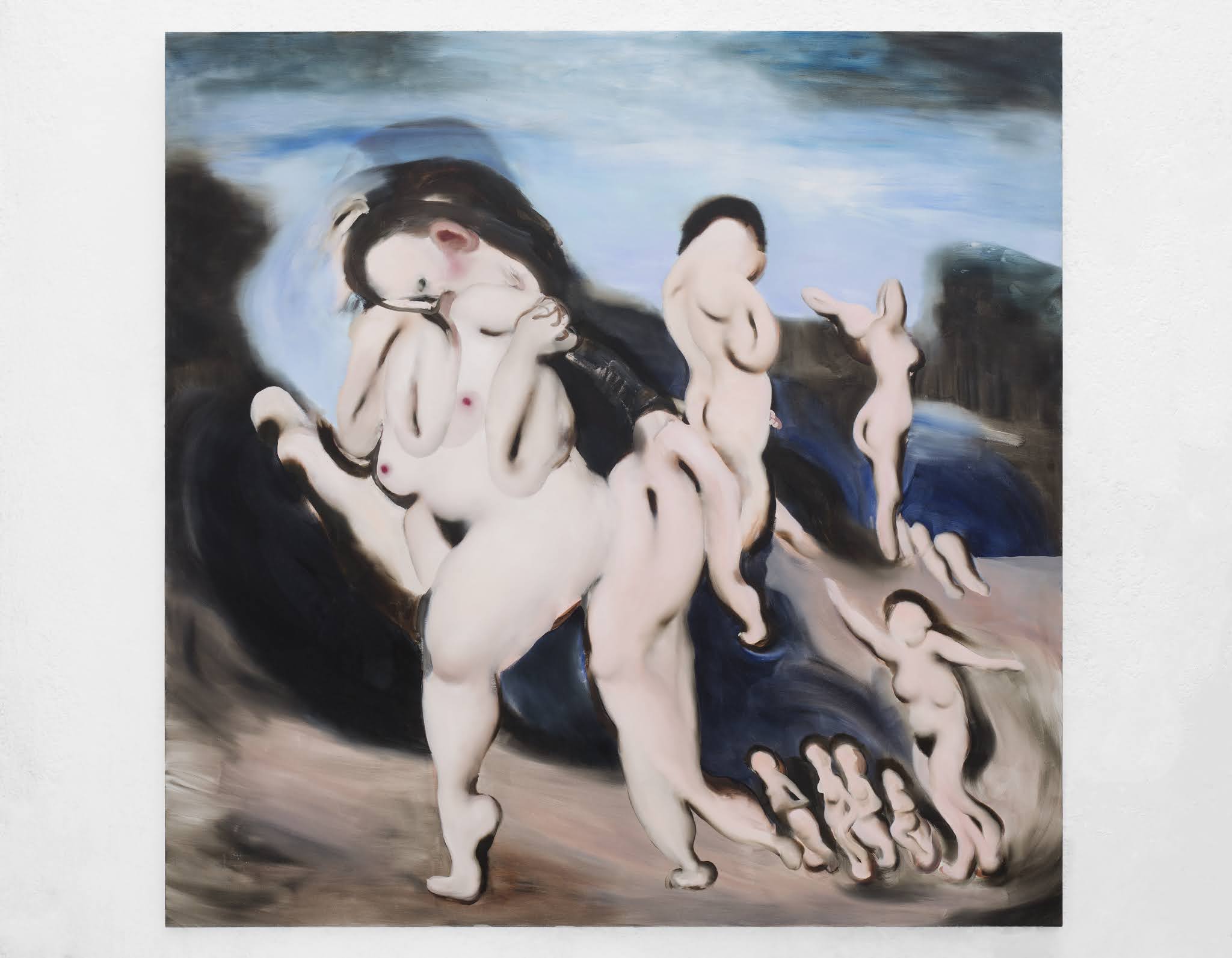 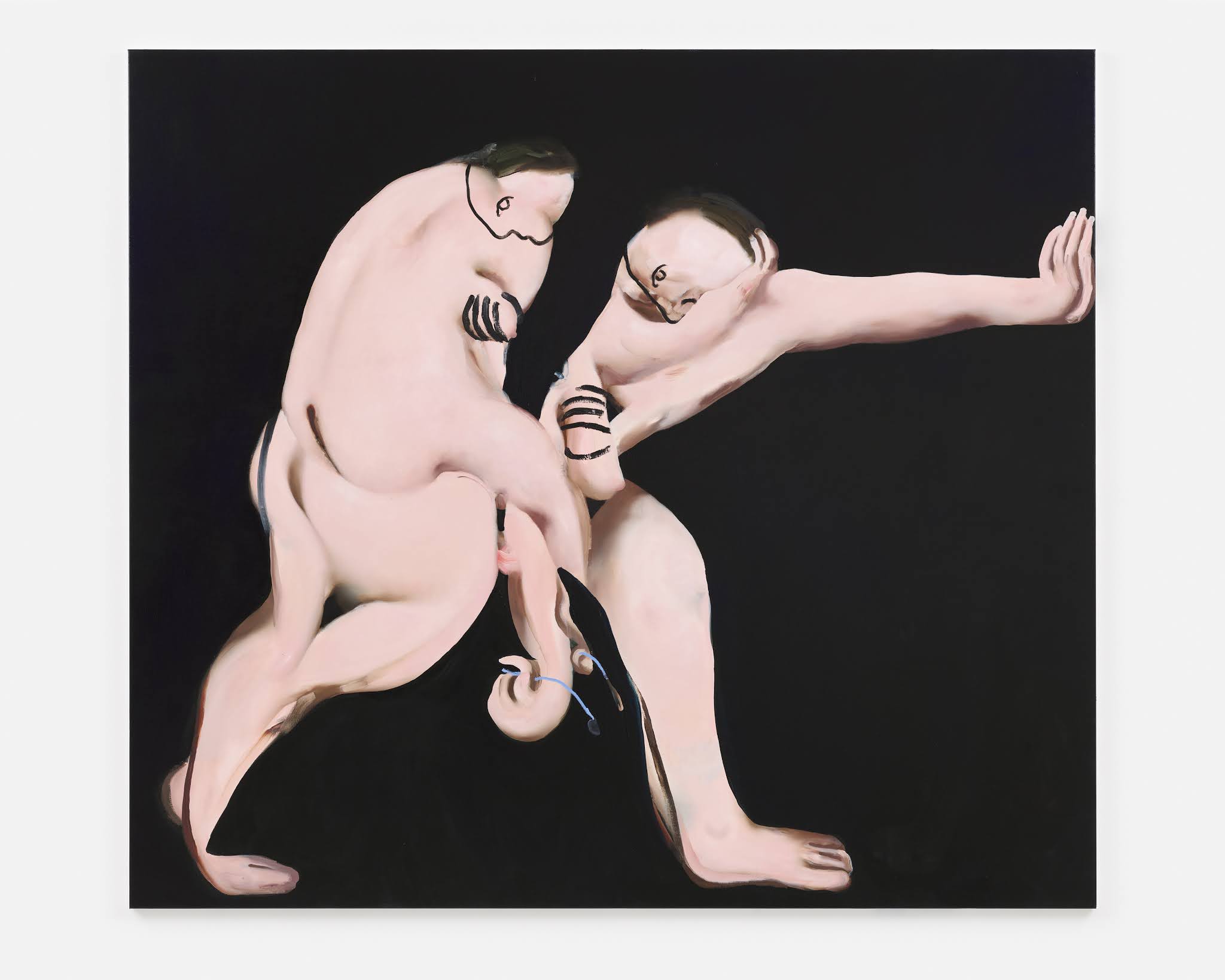 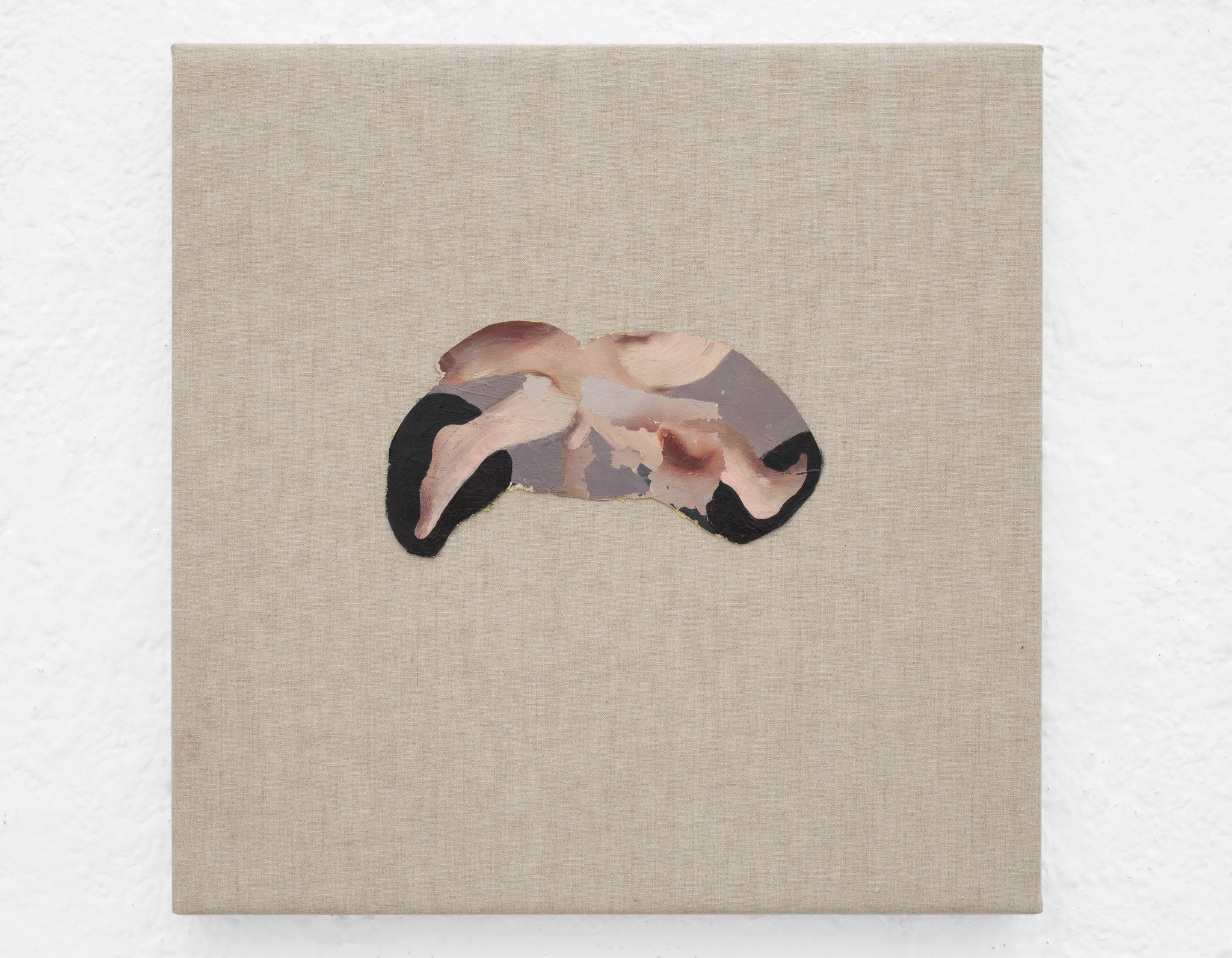 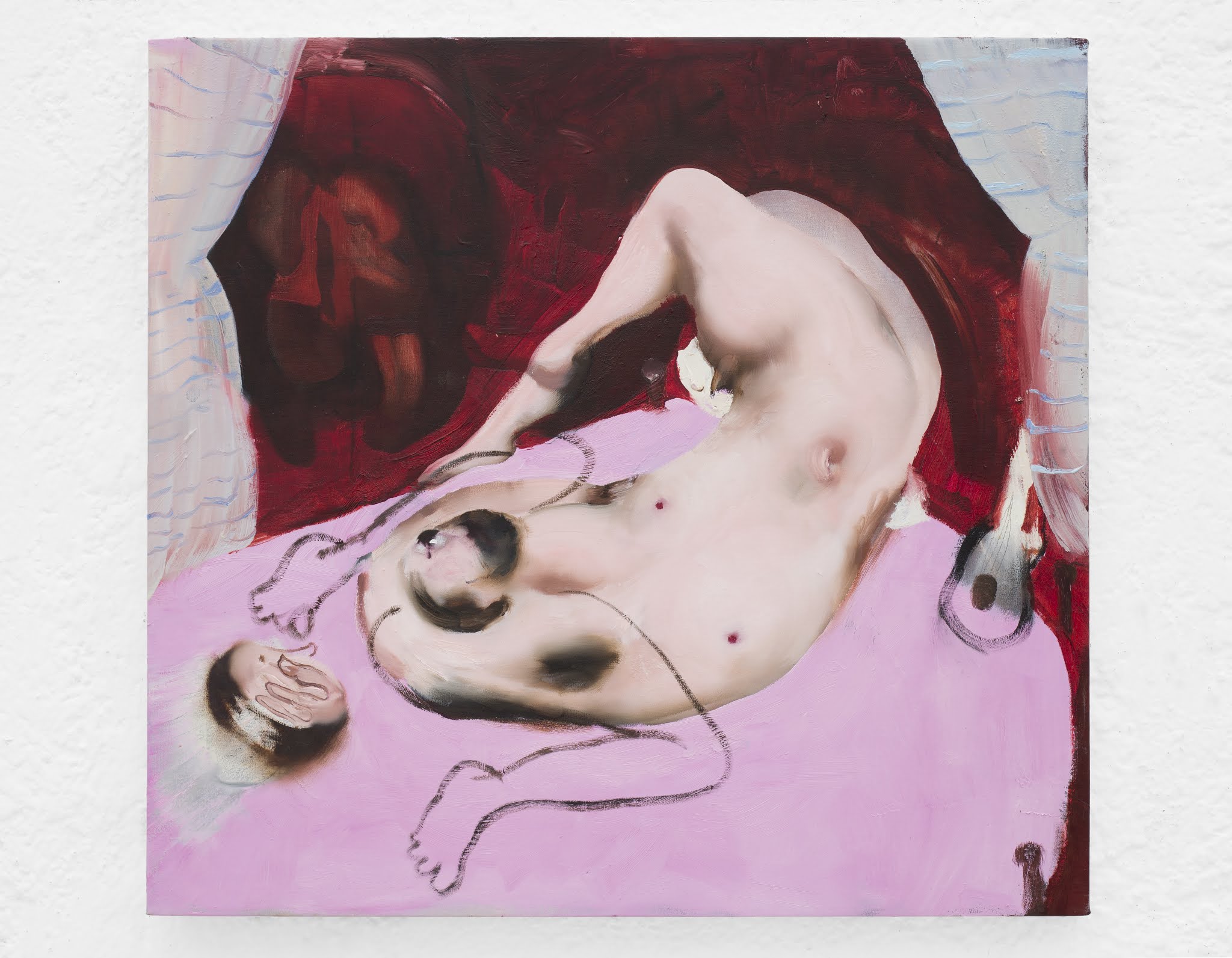 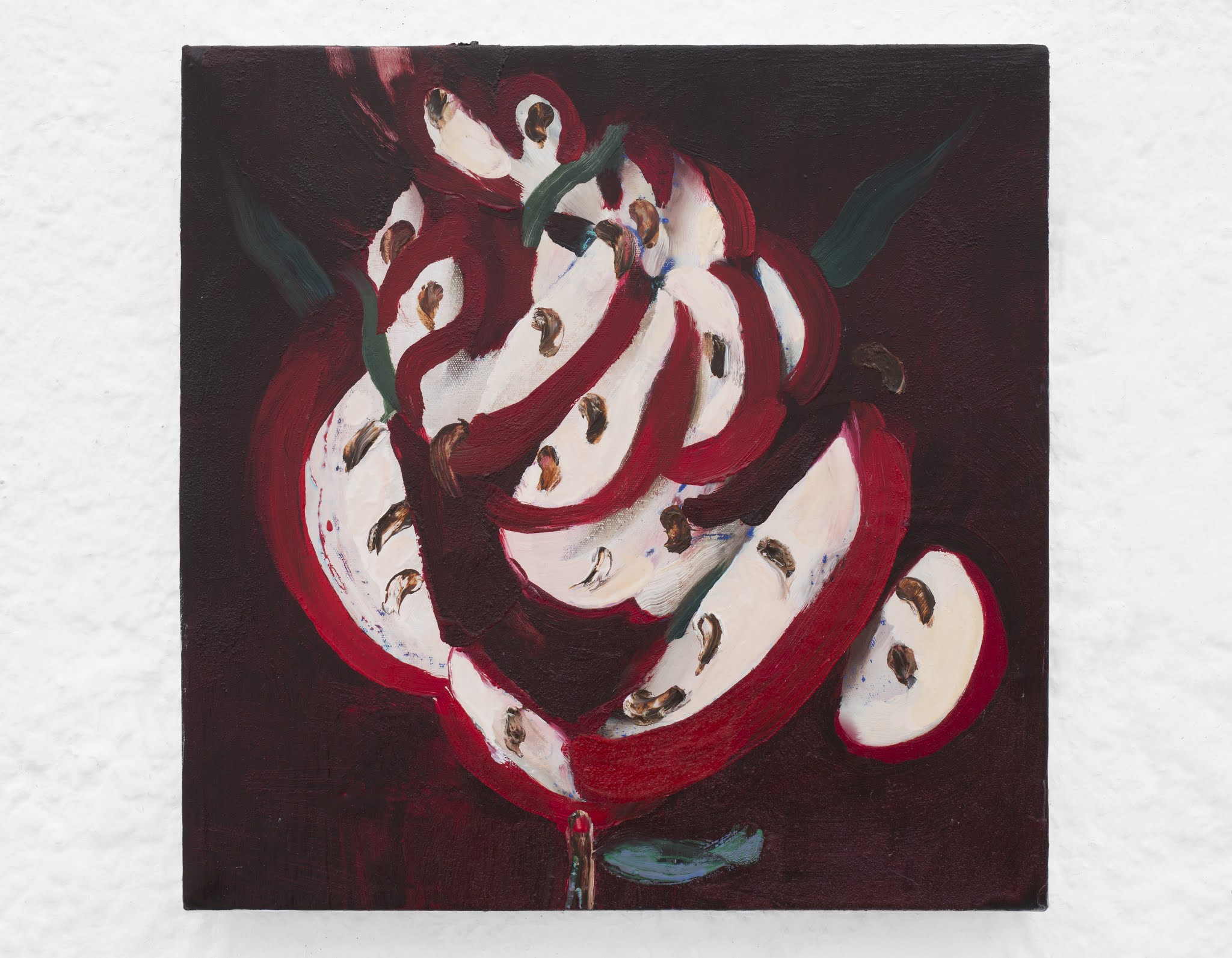 Logic of Ghosts describes a negotiation with the devastation of the present, one in which the cultural logic of heteronormativity and capitalism are naturalized in the psyche. The exhibition responds to these embedded powers with the possibilities of queerness not as a pictorial subject, but as fundamental logic. The bodies in Ambera Wellmann’s paintings navigate the potentiality of their present circumstances and endeavor to generate a domain informed by the ethos of queer futurity.

In previous works, Wellmann explored figuration within the horizontal domain of the bed, and in such inherently internal spaces, her amorphous bodies resisted the binaries of active and passive, male and female. Logic of Ghosts builds upon that inquiry by radically expanding it: a checkerboard of deep violet squares extends from the floor’s surface to occupy the walls as well. The grid’s rectilinear rigidity is deceptive; in actuality, it is composed of three differently-sized, imperfect squares. Embedded within the deep purple is a near-invisible motif of two scissoring women who rotate throughout the exhibition to further refuse a sense of orientation. Space is at once physical and mental, real and virtual, full yet empty: not-yet-here. Resting in a state of in-betweenness and imbued with potentiality, it asks us to negotiate our own visual set point.

Wellmann’s works populate with elusive figures and indeterminate motifs manifesting in uncanny physical states. She bends the rigidity of art history by plucking from specific paintings across differing eras. Less Like Ourselves, More Like Eachother recalls the ghostly white Venus of Cranach the Elder, whose skin exudes such an impossible radiance that she nearly glows in the dark. In Wellmann’s painting, the figure bends awkwardly, submitted to the force of penetrative darkness that splits the integrity of her form in two. The black background encircles her breasts to transform itself into a crude drawing of heads and hands, delineating her body. She carries her own separated parts and cradles her newfound faces, struggling to move forward. Unlike Cranach’s Venus, she is not contained by a narrow and upright frame. Instead, she pushes the composition horizontally as the weight of her body leans on the edge of the canvas for stability. She casts a shadow over the edge of the painting’s frame, inseparable from the darkness that produced her contours. Disrupting the hierarchies of figure and ground, these forms splinter into innumerable bodies, refusing the authoritative mechanism of a single, definable self.

Traversing distinctions between human and animal and figure and ground, Wellmann visualizes an irrational state where bodies transmute. Landscape with a Figure of a Woman references the pentimenti of Velasquez’ equestrian portraits, whose layers have thinned and cracked over time, exposing repositioned heads and hooves. In these moments, the painting resists the authorities of its maker by both regenerating and haunting itself. Likewise, Wellmann’s work refuses to rest within a single state or temporality. A central body canters across the picture plane, floating slightly above the ground. Behind her, traces of earlier forms echo backward to silhouette against the sky. Older images are buried by newer bodies and yet those original forms drift to the surface of Wellmann’s paintings, unearthed through erasure, hovering beneath and repopulating the painting from inside.

The title of Scissoring references both a sexual position and how the work was constructed. Cut from an existing painting, the work cannibalizes itself as endless layers and previous revisions peel beneath a surface constructed from repeatedly disembodied parts. The legs hover midair and mid-leap, running away to an unseen destination. Likewise, Half-Mother offers two hands hewn from unknown limbs that tip-toe across raw linen in an indeterminate empty room. Each body is a container of a genealogy of transfiguration.