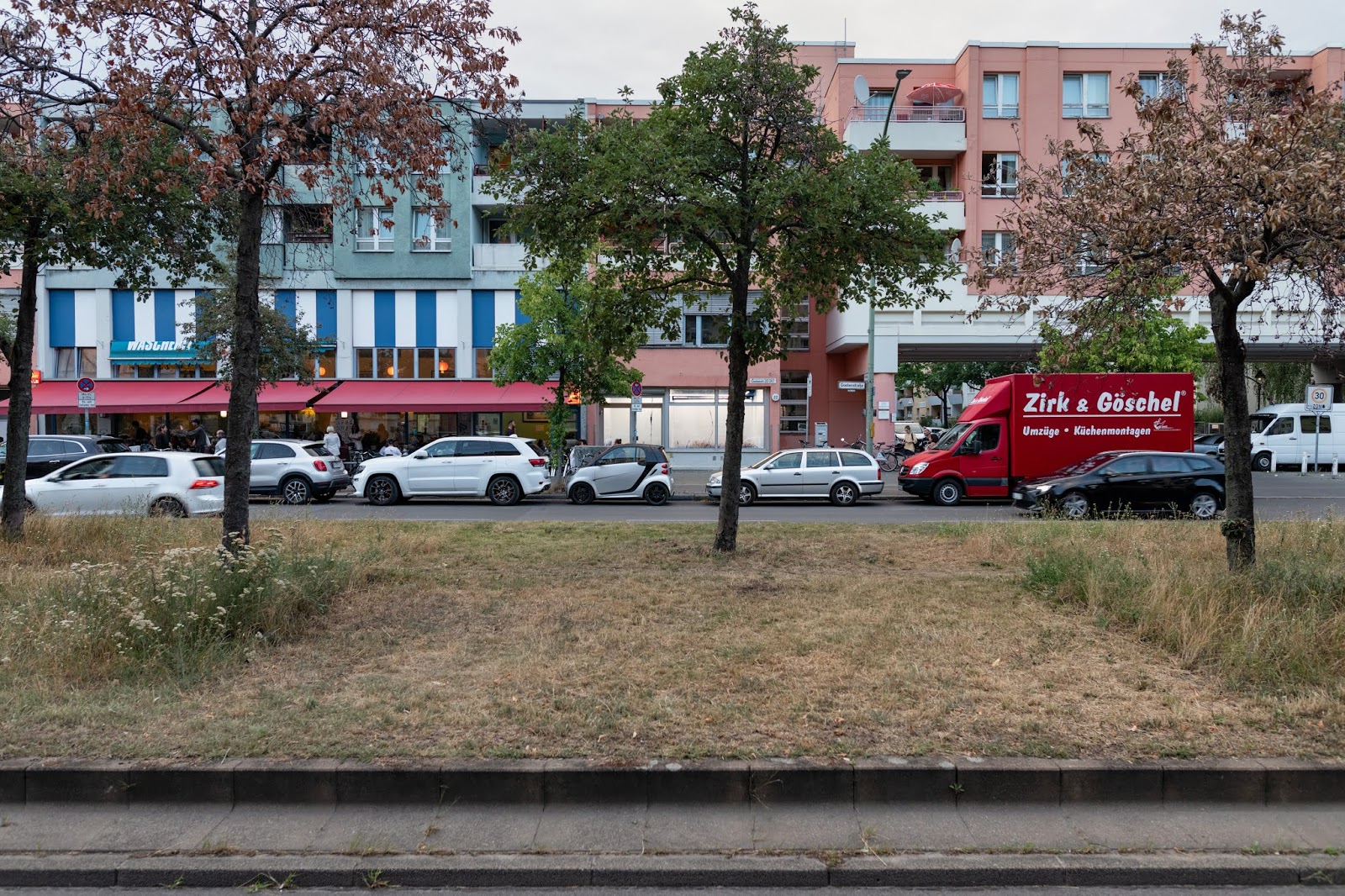 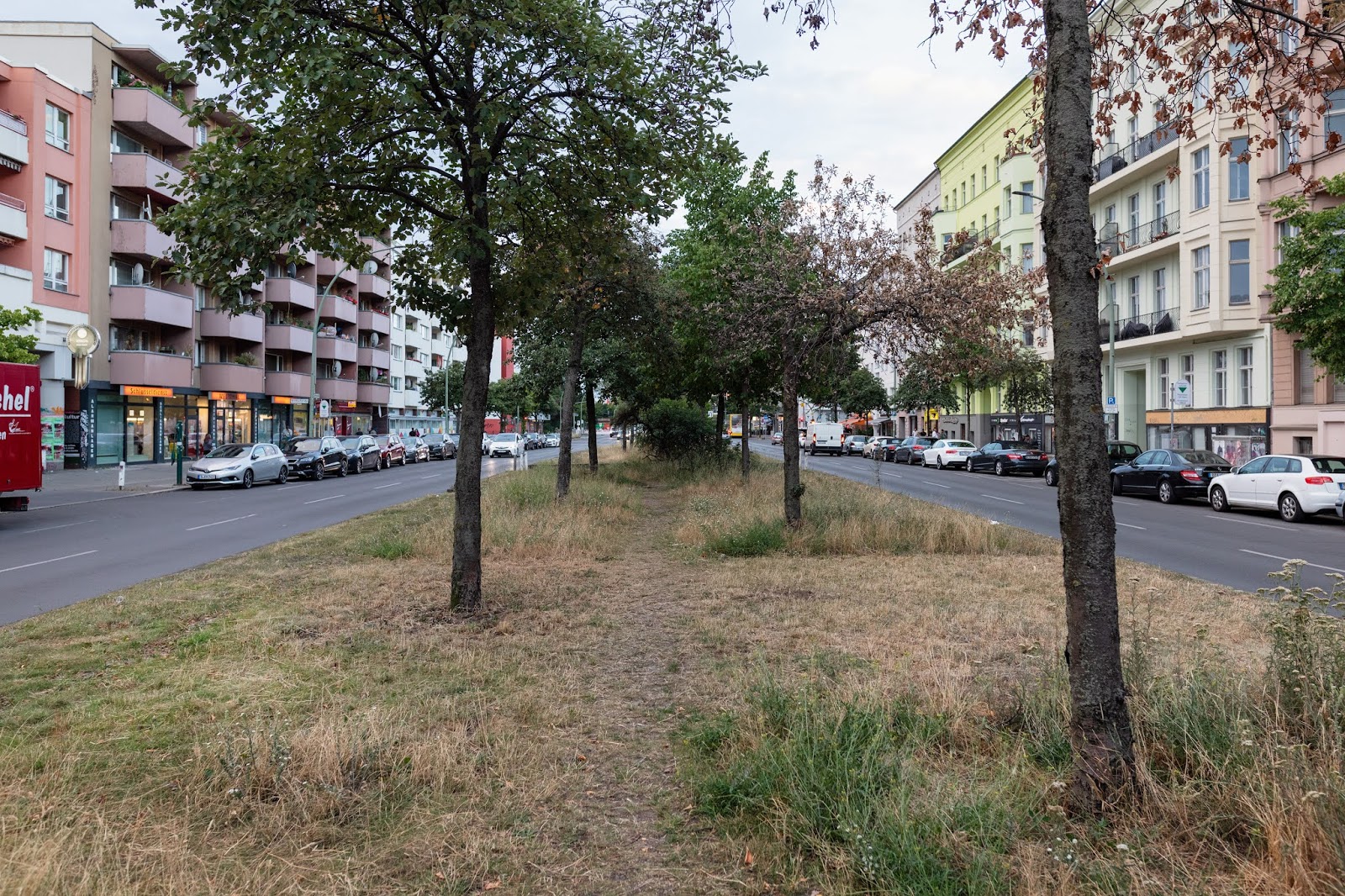 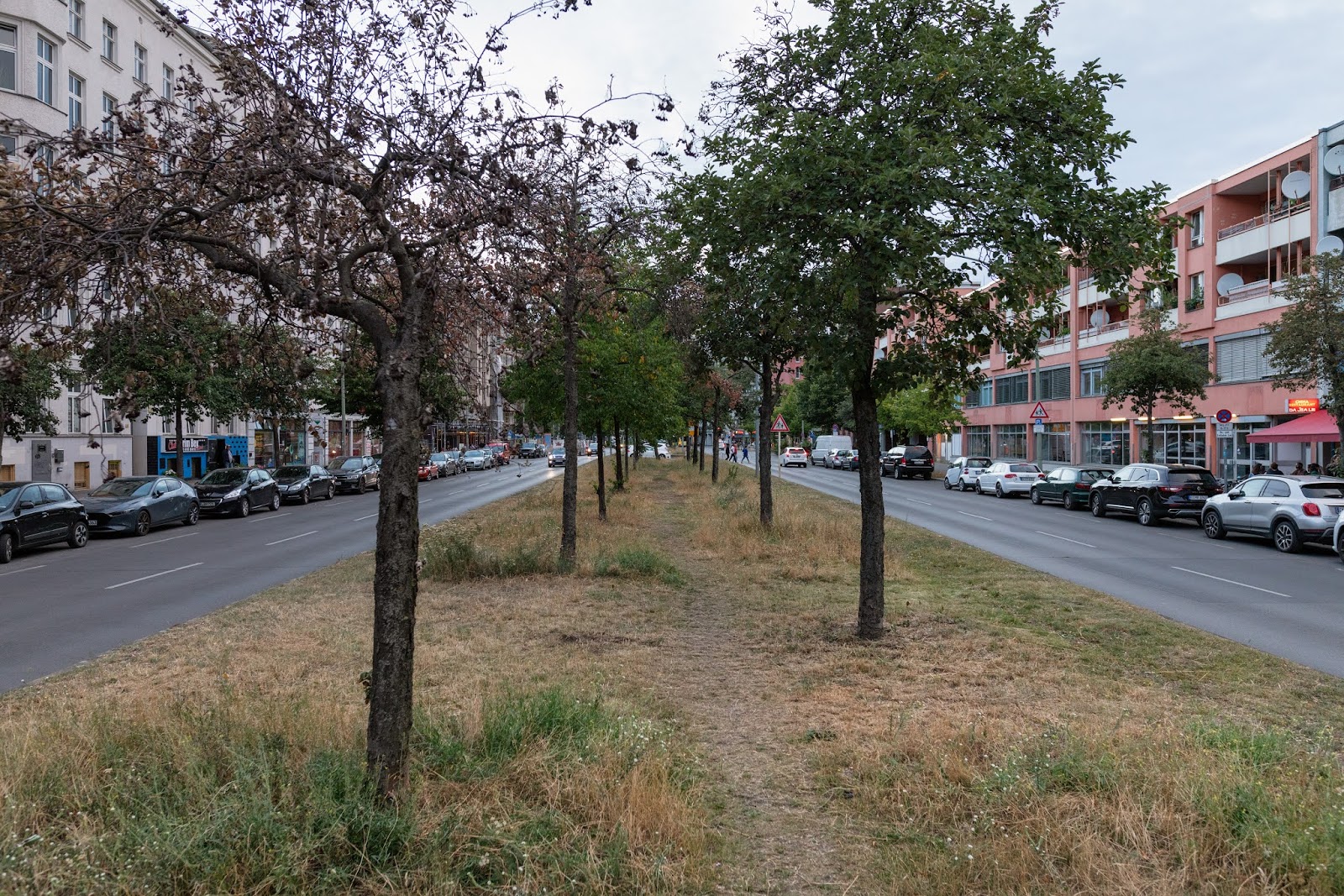 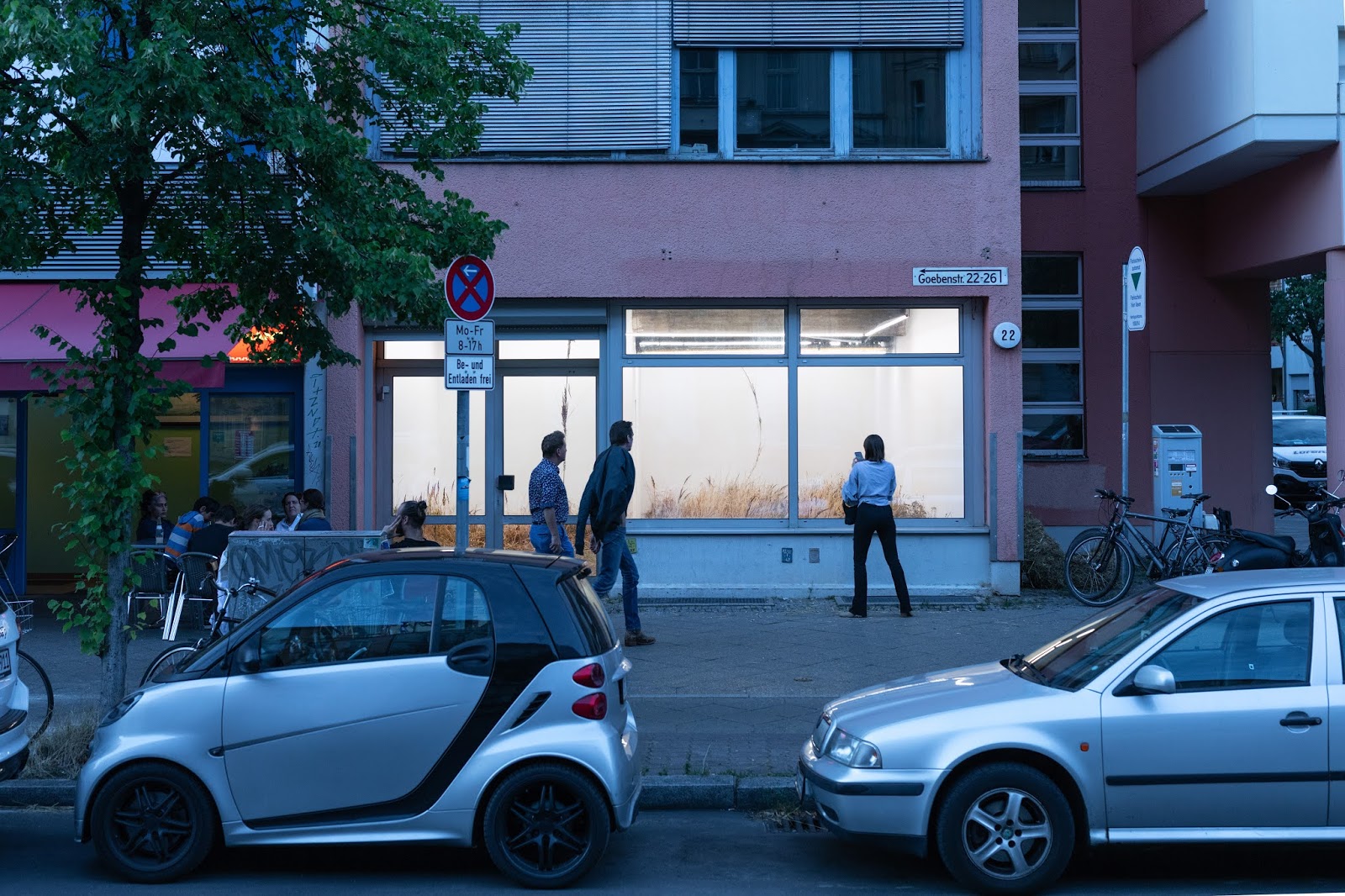 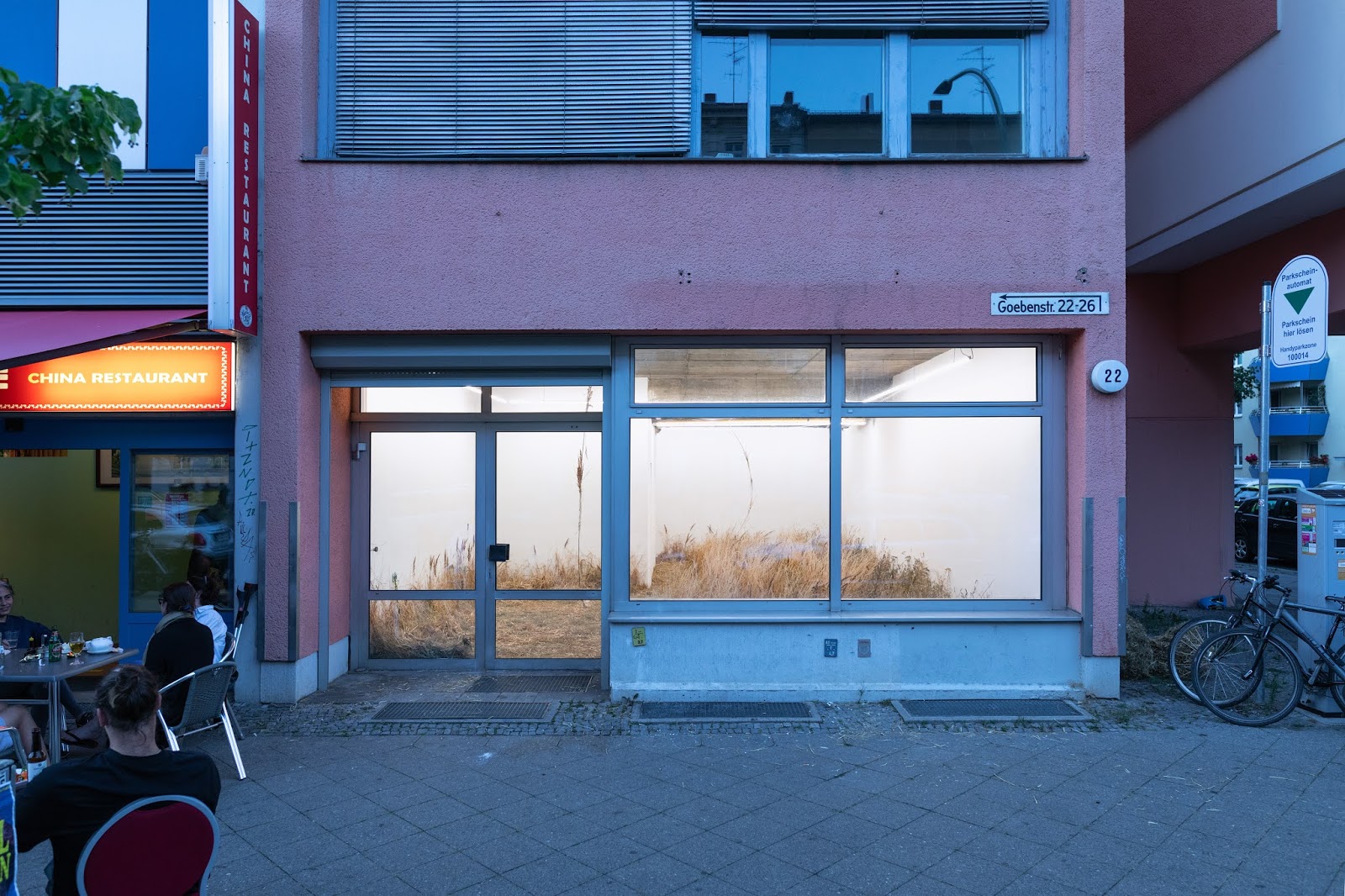 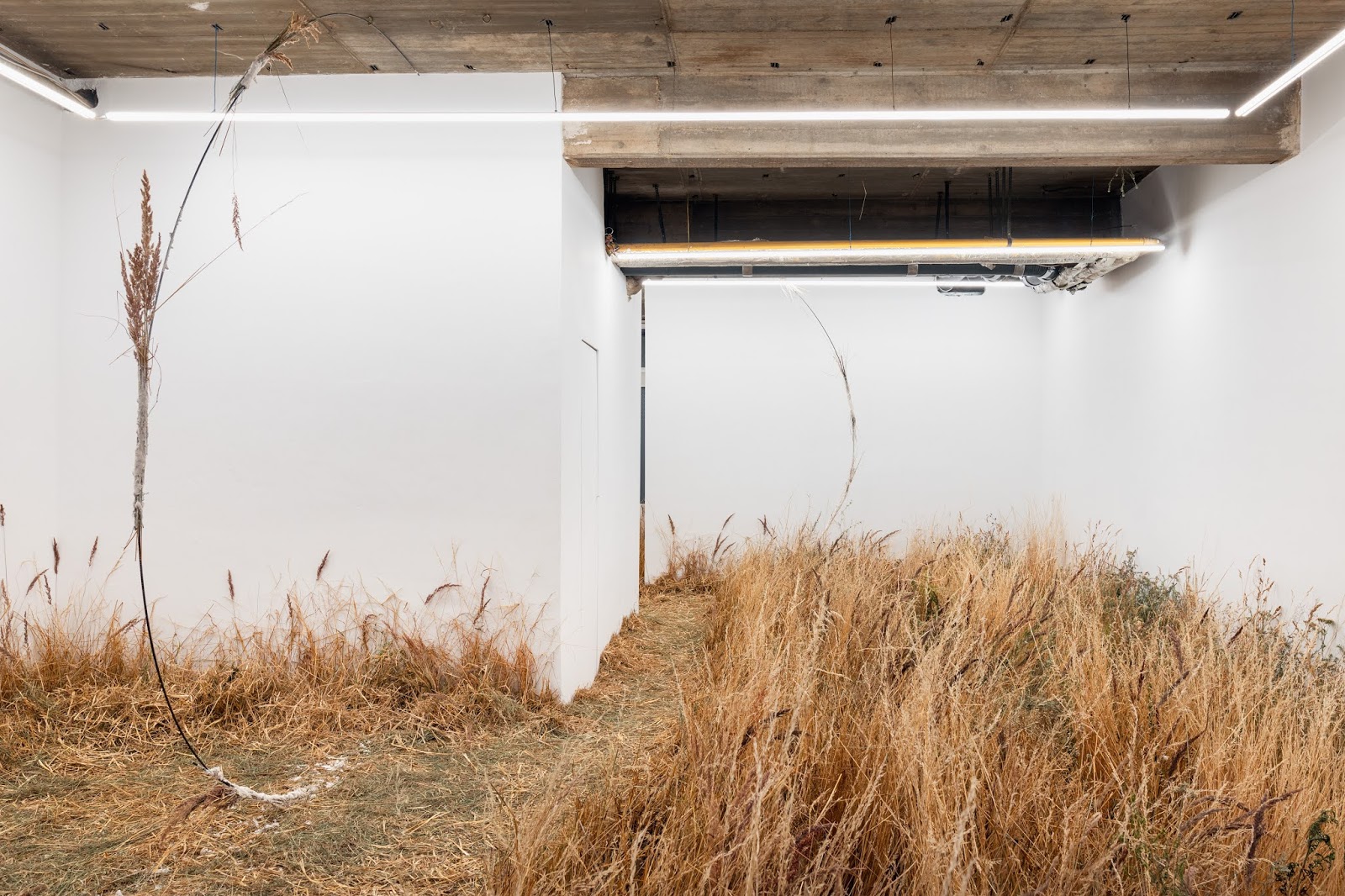 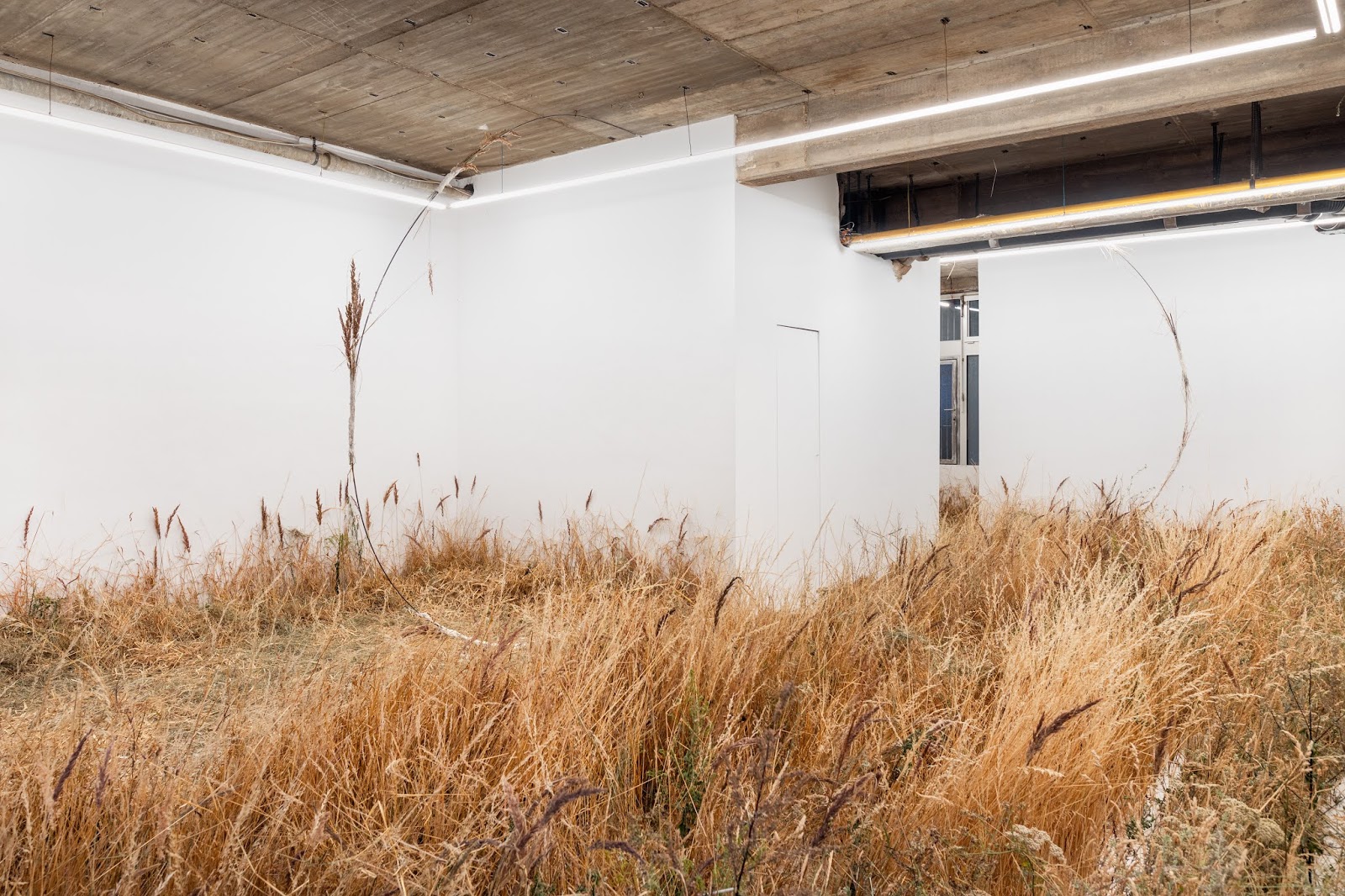 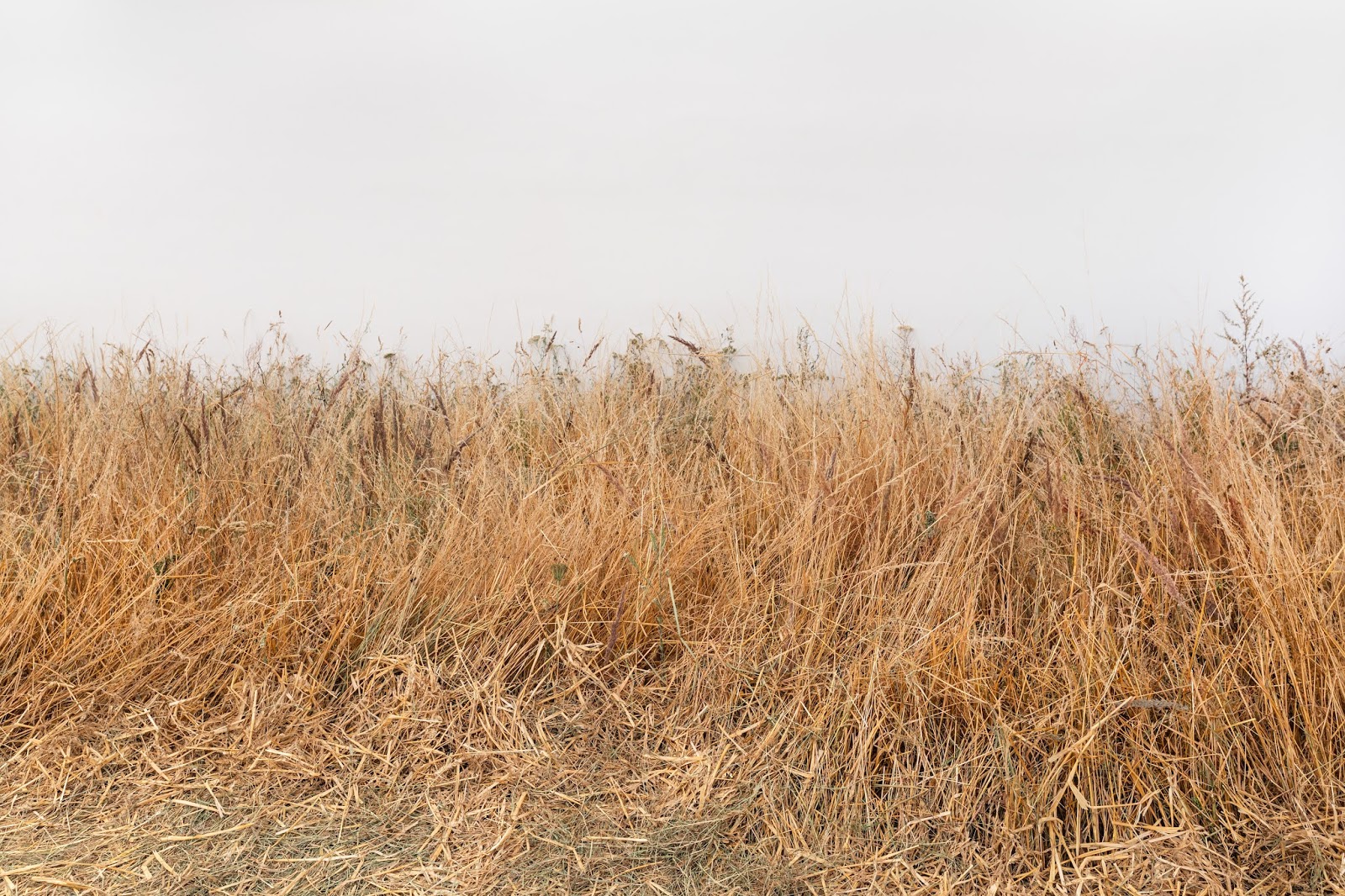 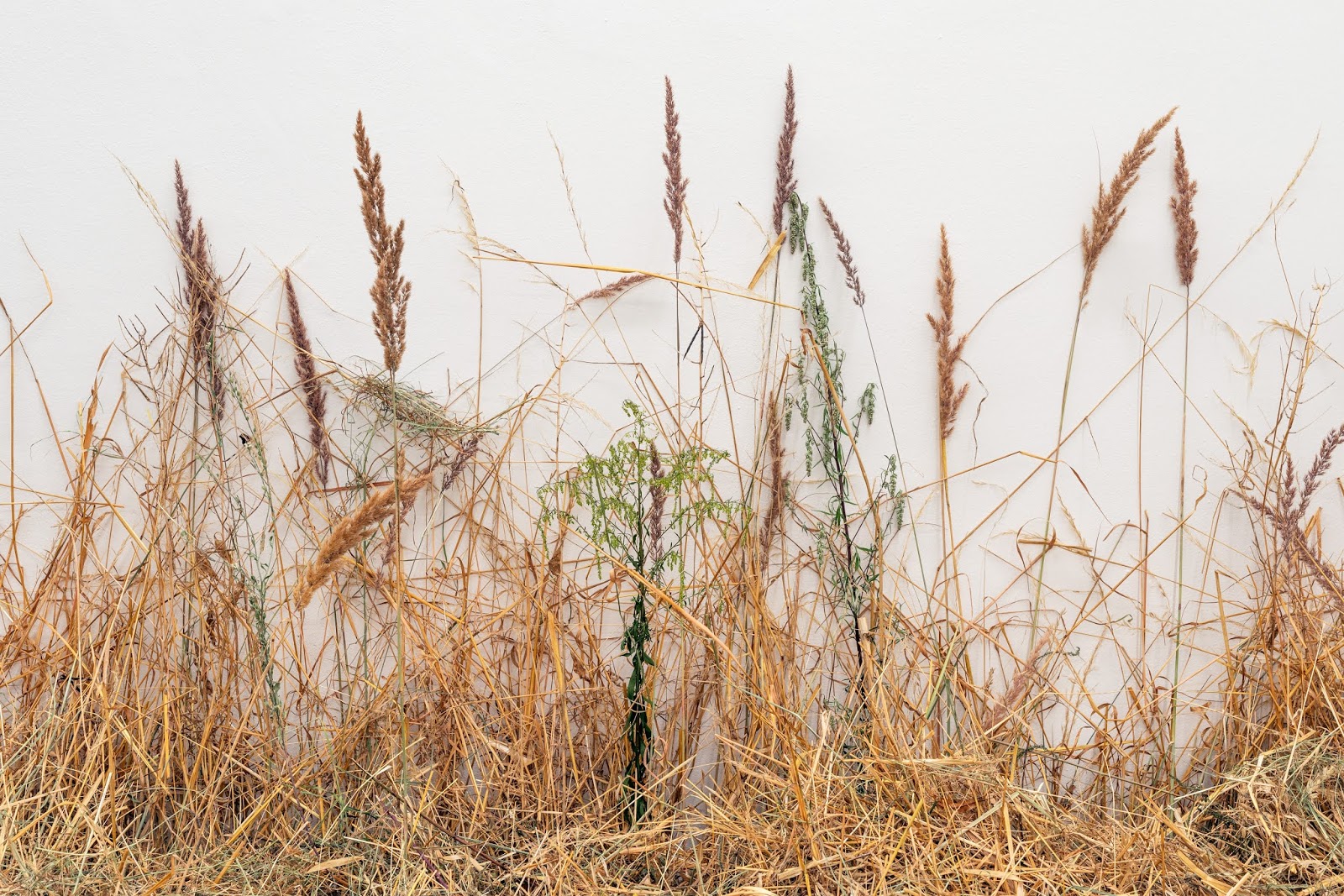 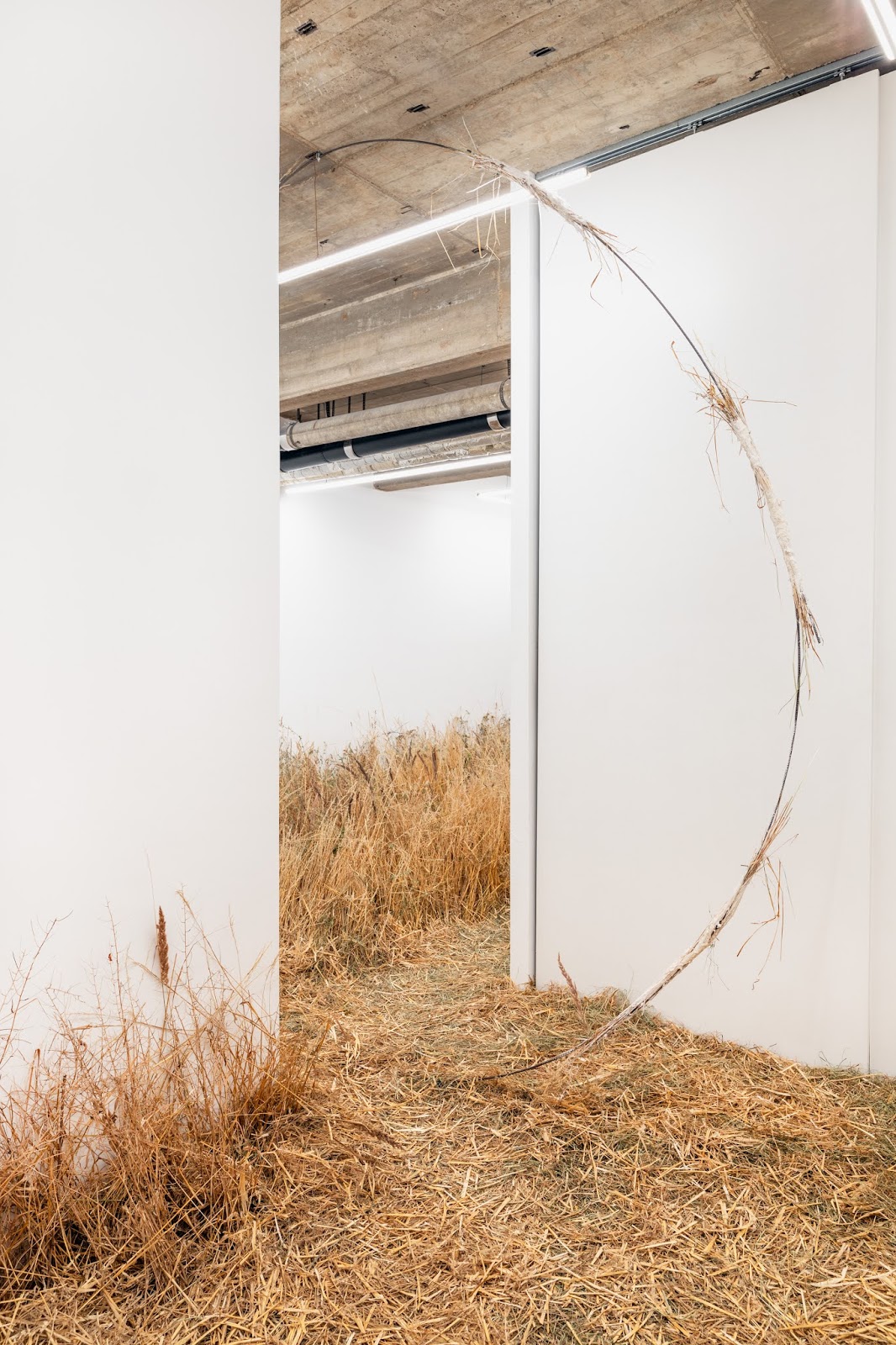 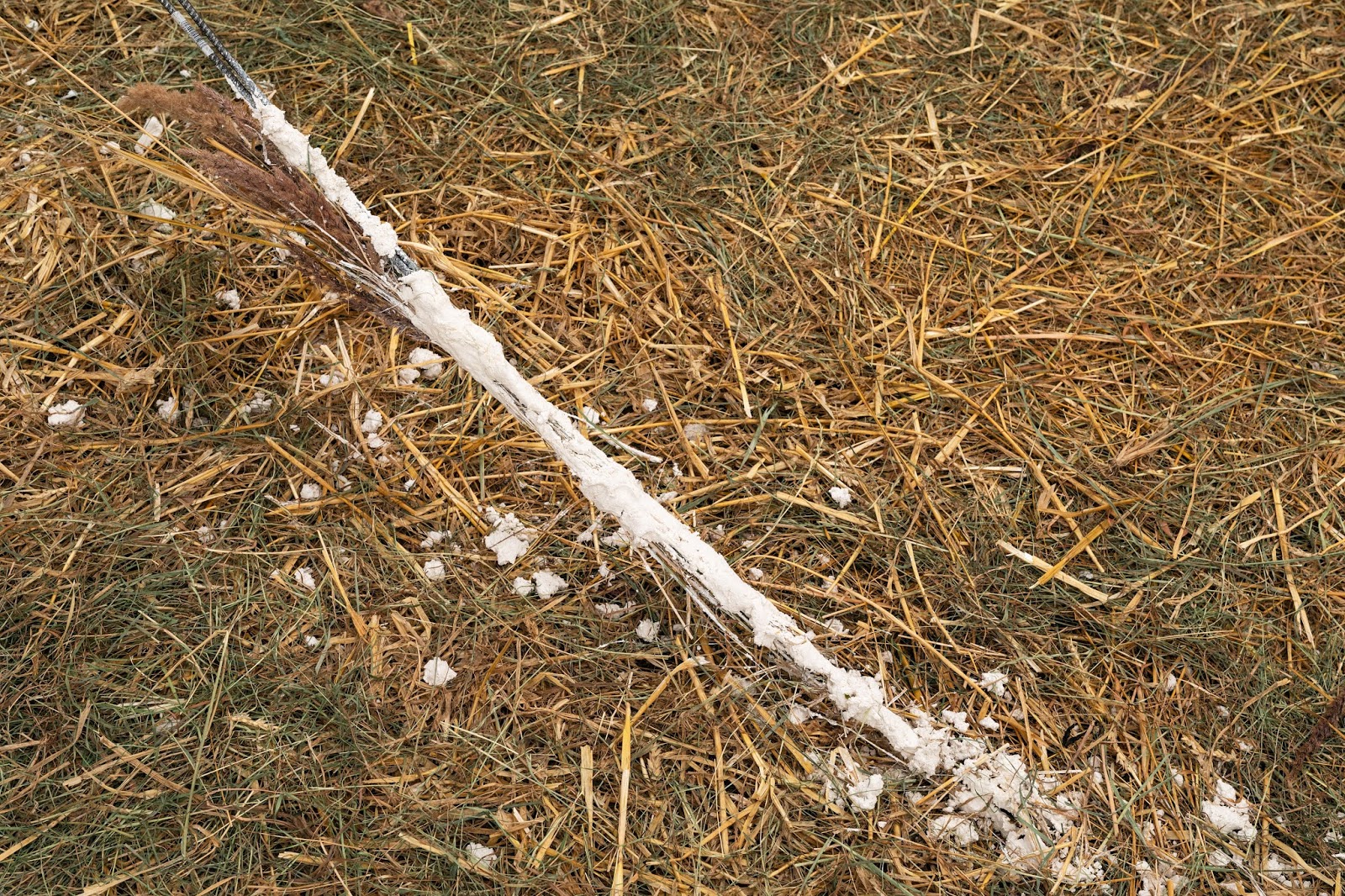 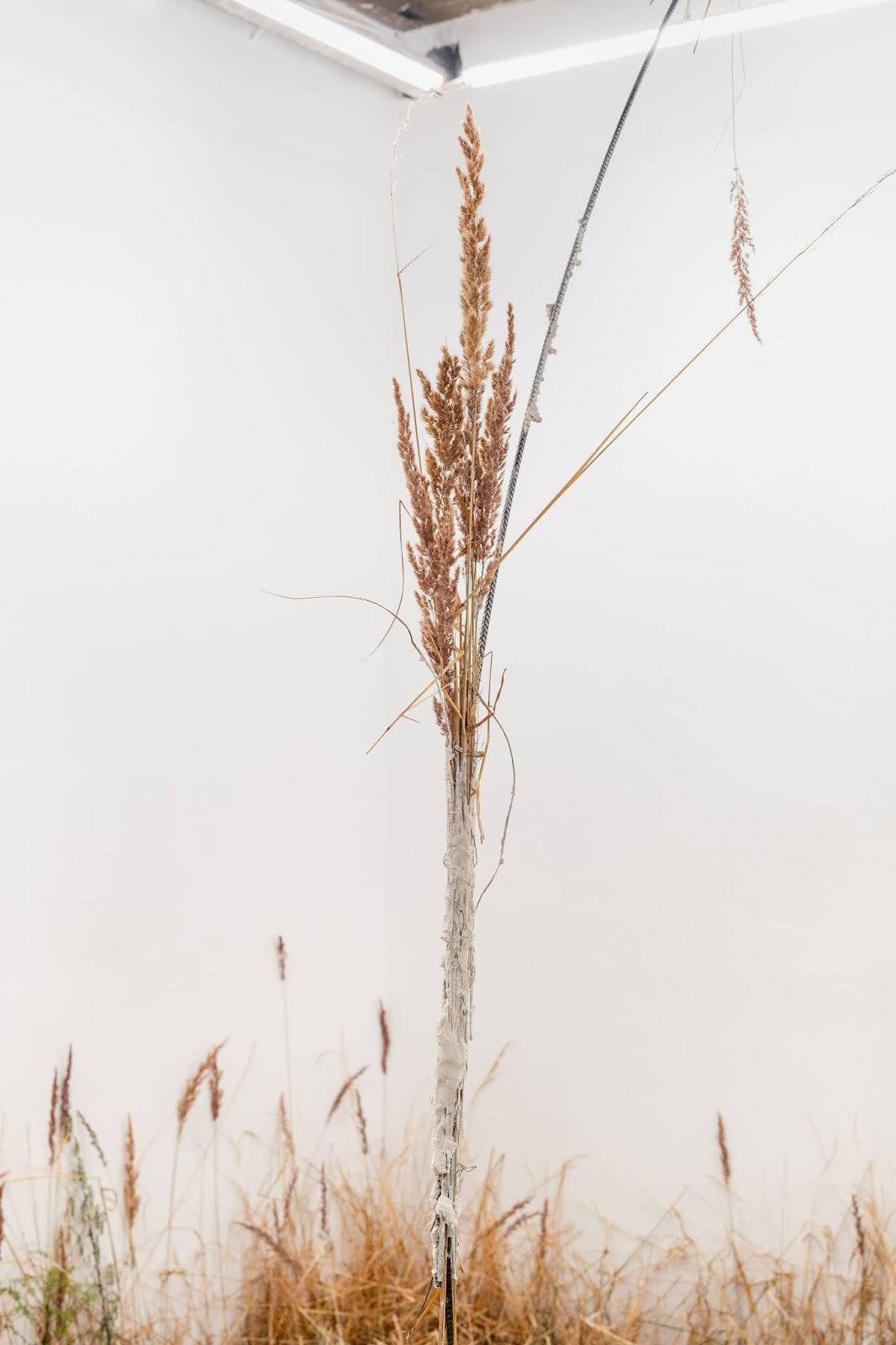 Photos by Stefan Haehnel
All images courtesy of the artist and space.

A field of references
Thoughts on Martin Kähler’s exhibition „Campo” at goeben.berlin

To be exposed to Martin Kähler's works means to be confronted with a certain anti-attitude, a certain anarchism, which seems equally fed by disillusion, frustration and satiation, as by devotion, care, and ambition. Therefore, I would like to call it an affectionate anti-attitude, which already brings us to the unifying dichotomy that this text, and the quote, is aiming at. Kähler himself would probably call it a „post Arte Povera” attitude.

To make this reference tangible, let’s look at this Italy based „guerrilla” art movement of the late 60s and 70s. With their anti-mainstream practice(s), the members of Arte Povera, as the „poor art”, took a stance against the commodification of art and, or rather IN the art world. In their minds, ”rich art” merely perpetuated the capital driven economy and separated art from the immediacy and asystematic unreeling of real life. It was a matter of longing back to a less civilised and conformist presence and believing in the genesis of ground zero, and standing up for the void that was assumed to exists between art and the cycle of life. To reclaim this „real” control of free human existence, the artists identifying with Arte Povera declared visual and linguistic anarchy by being: PRO-MUNDANE! PRO-EVERYDAY! PRO-NATURE! PRO-URBAN! PRO-MATERIALITY! Pro-INTUITIVE! PRO-IMMEDIATE! PRO-FLUIDITY! and radically ANTI-NORMATIVE! ANTI-CATEGORISABLE! ANTI-BINARY! ANTI-ILLUSIONARY! ANTI-LINEAR! ANTI-ICONOGRAPHIC!

But what does it mean to carry on this heritage? In a world where the idea of ground zero never seemed more unattainable. Where instead of voids there are only a few highly defined empty spaces left, waiting to be stuffed. Where seemingly all forms of existence are caught up in the new spirit of capitalism. Where nature is no longer natural but subject to the logic of the Anthropocene. Where every formerly public space, as a space of „real” political interaction, is permeated by economisation interests. Where identity and individualism no longer testify to authenticity and autonomy but to market value. Where all these confinements apply equally to the life system and to the art system. Where it is the same.

It does seem a long time ago that the art world could defend its existence as an antithesis. Instead, it has increasingly become a replica of that reality from whose exploitation it so desperately wanted to escape. Better than ever before, institutions curate, exhibit, historicise and capitalise not only their content and value system, but also the artistic criticism directed towards them. Regardless of wether it is a form of „inward" or „outward" criticism – being the two categories art historians have classified. While the former brings together artistic practices staying within the art world to subvert or usurp the institutional operating protocols (next to Arte Povera, e.g. the ready made, conceptual art, and Institutional Critique), the latter concerns practices that seek or create (exhibition) spaces outside of the art world (Land Art, Happenings, Fluxus etc.).

But what anti-attitude is there left to take on then? Where every attainable anti-attitude is immediately consumed by the system itself and seems conformist, inward or outward. Every idealism nostalgic. When every criticism feeds the canon, assures it, and increases its already remarkable ignorance. When there is no void to be found between art and the cycle of life anymore. When everything is highly categorised and yet equally. Where everything is the same.

Looking at Kähler's exhibition „Campo”, I would like to claim that he has established, or better exercises a mode of artistic articulation which avoids the logic of binaries by radicalising it, by blurring different fields. Transplanting the crops, which were originally growing on the median stripe facing the project space, into the White Cell – as the White Cube should be consequently called now – he not only brings the outside to the inside and the inside to the outside, but also connects the two strategies of artistic criticism to each other, leading them ad absurdum. While the outside, through its engraved mark on the gras, clearly gains in artificiality, the grasses inside the exhibition space gain in naturality, being contrasted by its highly ideological container: art becomes nature and nature becomes art. Transferring this meaning from the inside to the outside and vice versa, following the quasi rule book of art history, Kähler seems to almost automatically prove the interchangeability of categories, of contents and boundaries, while simultaneously disproving the possibility to withdrawal from them. I would call it a loving as well as humorous gesture, when, armed with a sickle, he laboriously harvests the straws and ritually – meaning pedantically – plants them into the new Styrofoam soil. When he utilises the man-made and economic-driven street park situation – Grünstreifen – with its artificial crops mixtures – Mischkultur – to refer to the long lost ground zero, to the undisturbed mode of „real” natural existence.

This leads us to the idea, that an anarchist stance can thus only be adopted if it is simultaneously understood as a compromising – anti-anarchist – one, thus futile. This is where the anti-attitude regains its strength, in its dialectal and contextual consciousness, and in the awareness that it is better to disclose the confinements rather than make illusions of freedom. This is where even a beaten track, as testimony to collective conformism, appears as rebellion. Something like an anti-anti-attitude: ANTI-ANTI-NORMATIVE! ANTI-ANTI-CATEGORISABLE! ANTI-ANTI-BINARY! ANTI-ANTI-ILLUSIONARY! ANTI-ANTI-LINEAR! ANTI-ANTI-ICONOGRAPHIC!