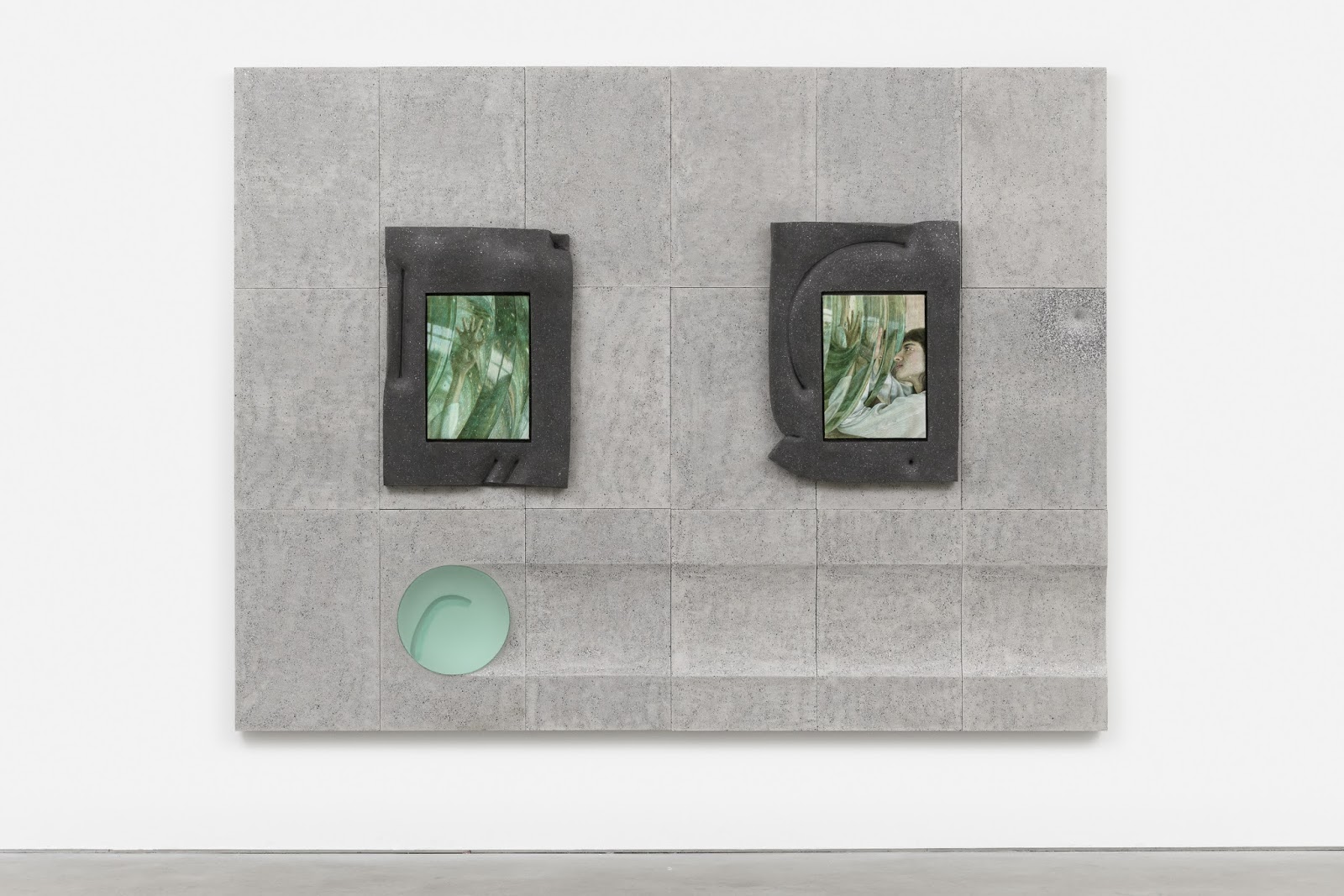 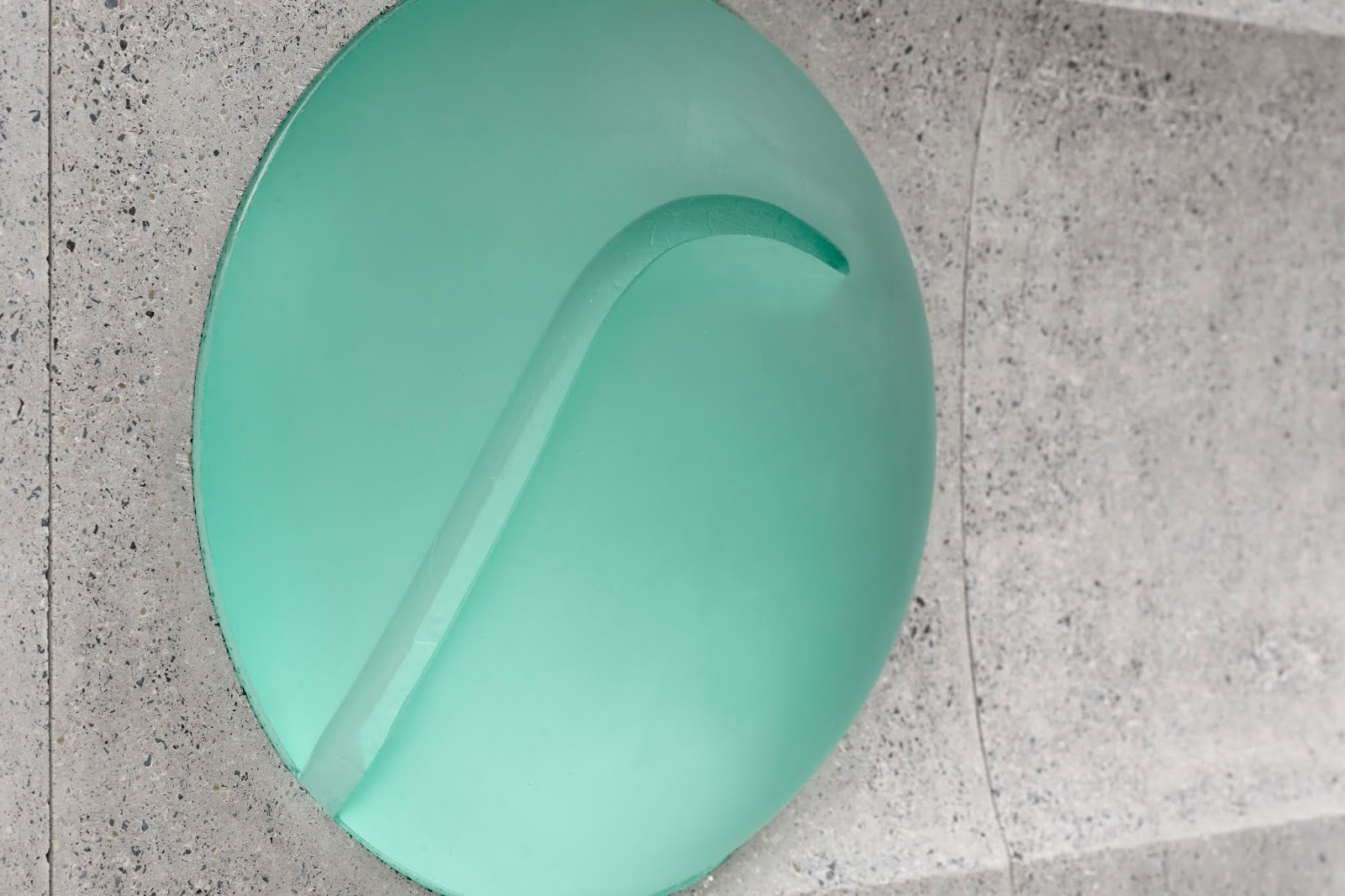 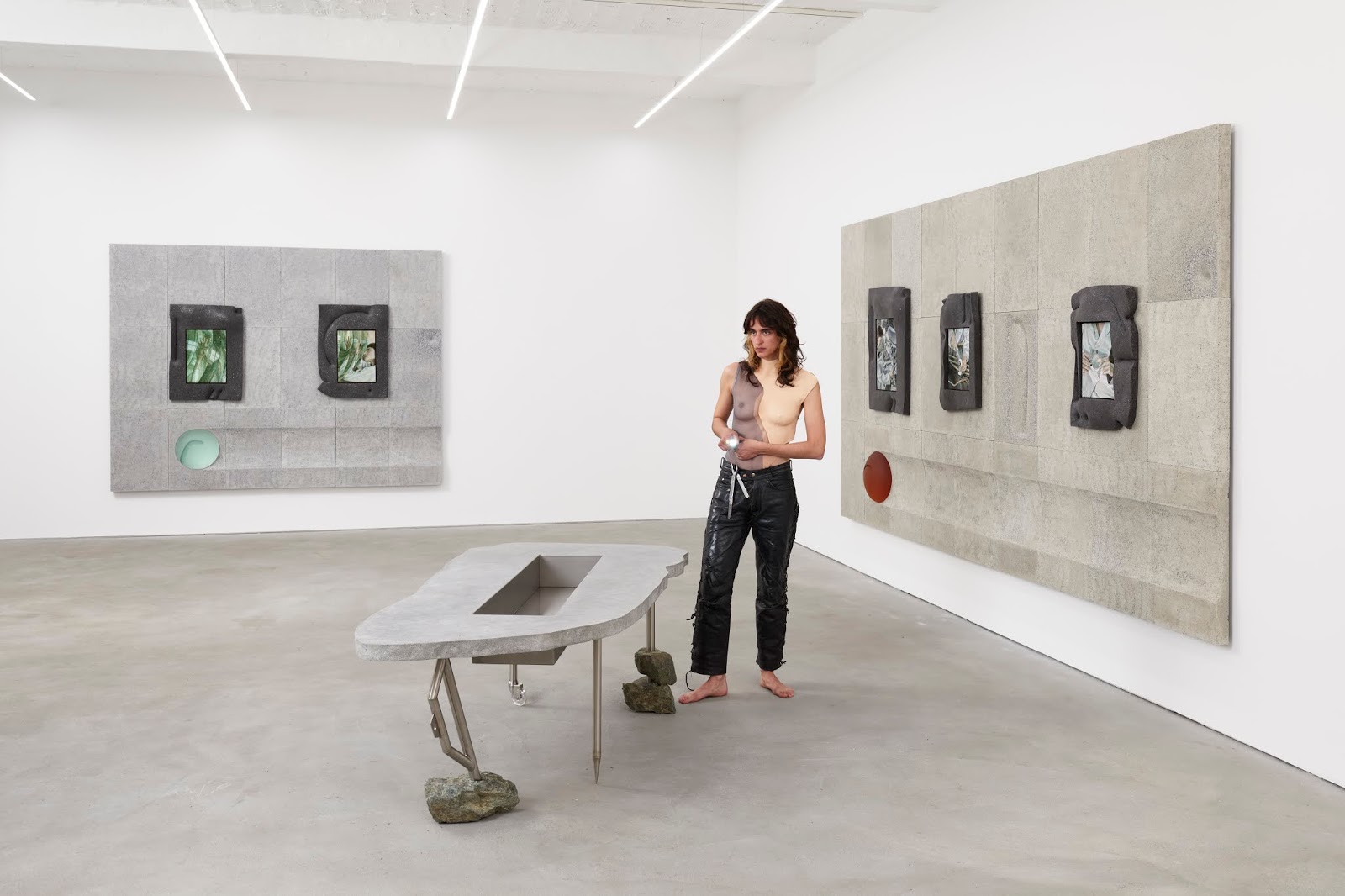 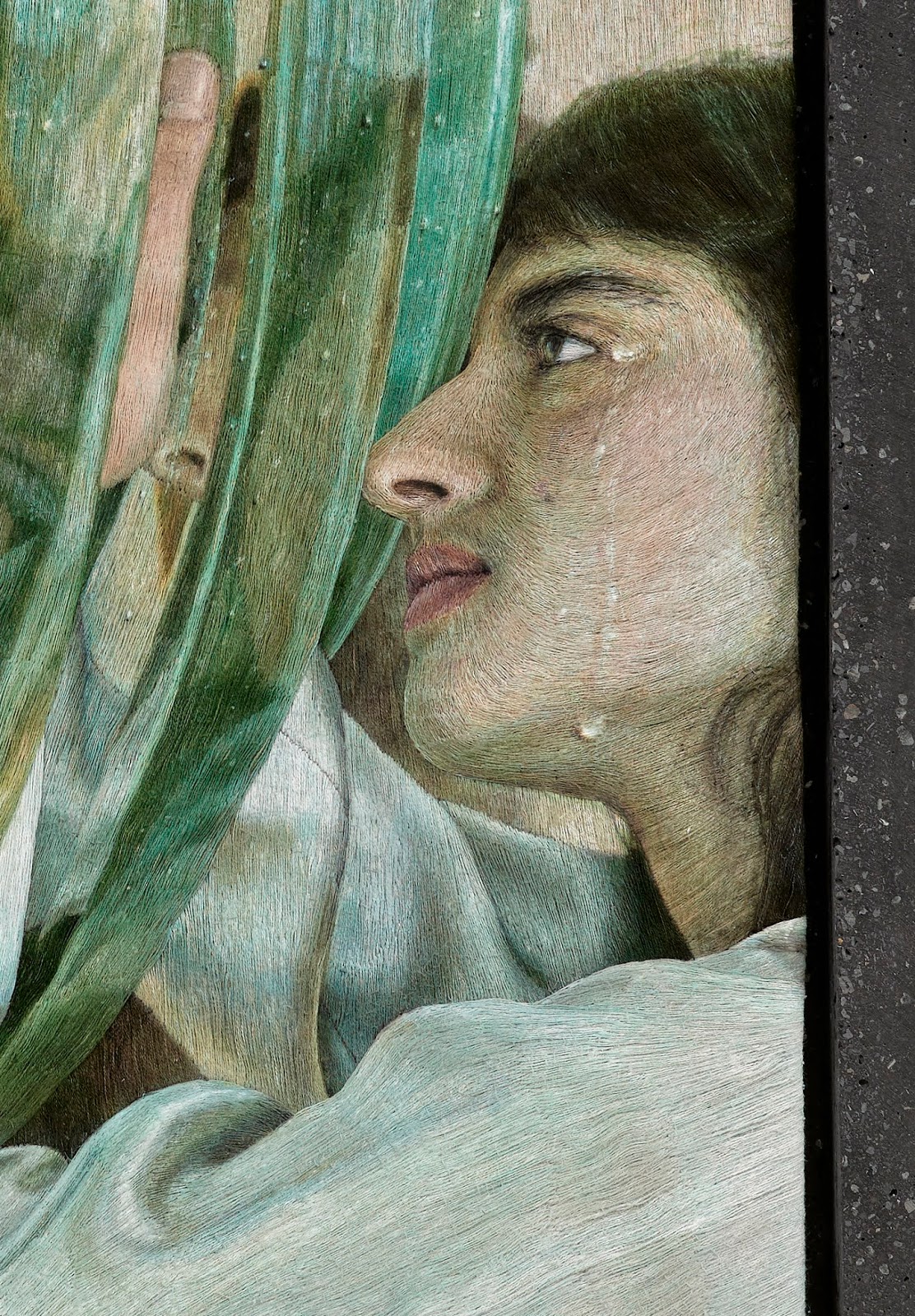 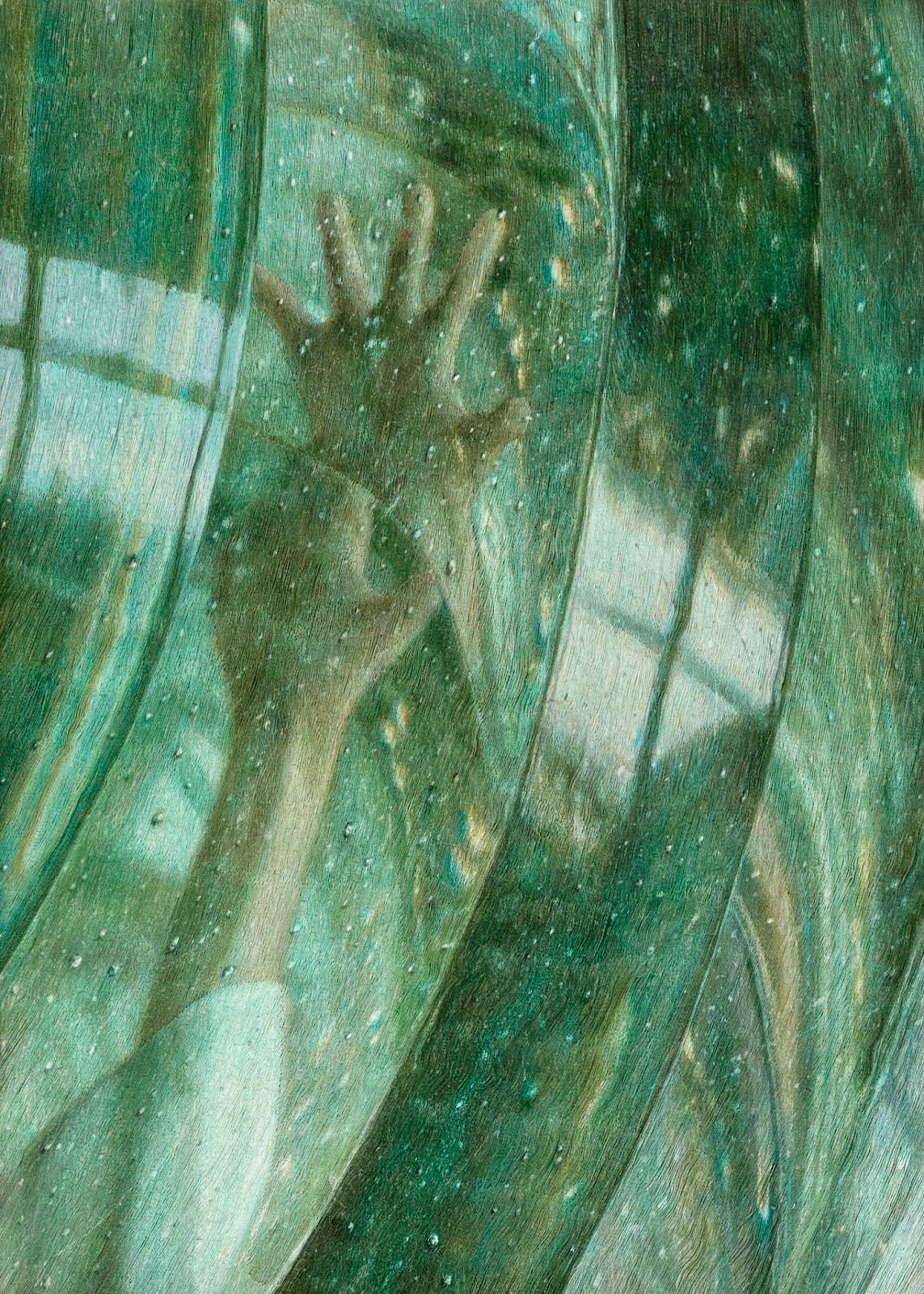 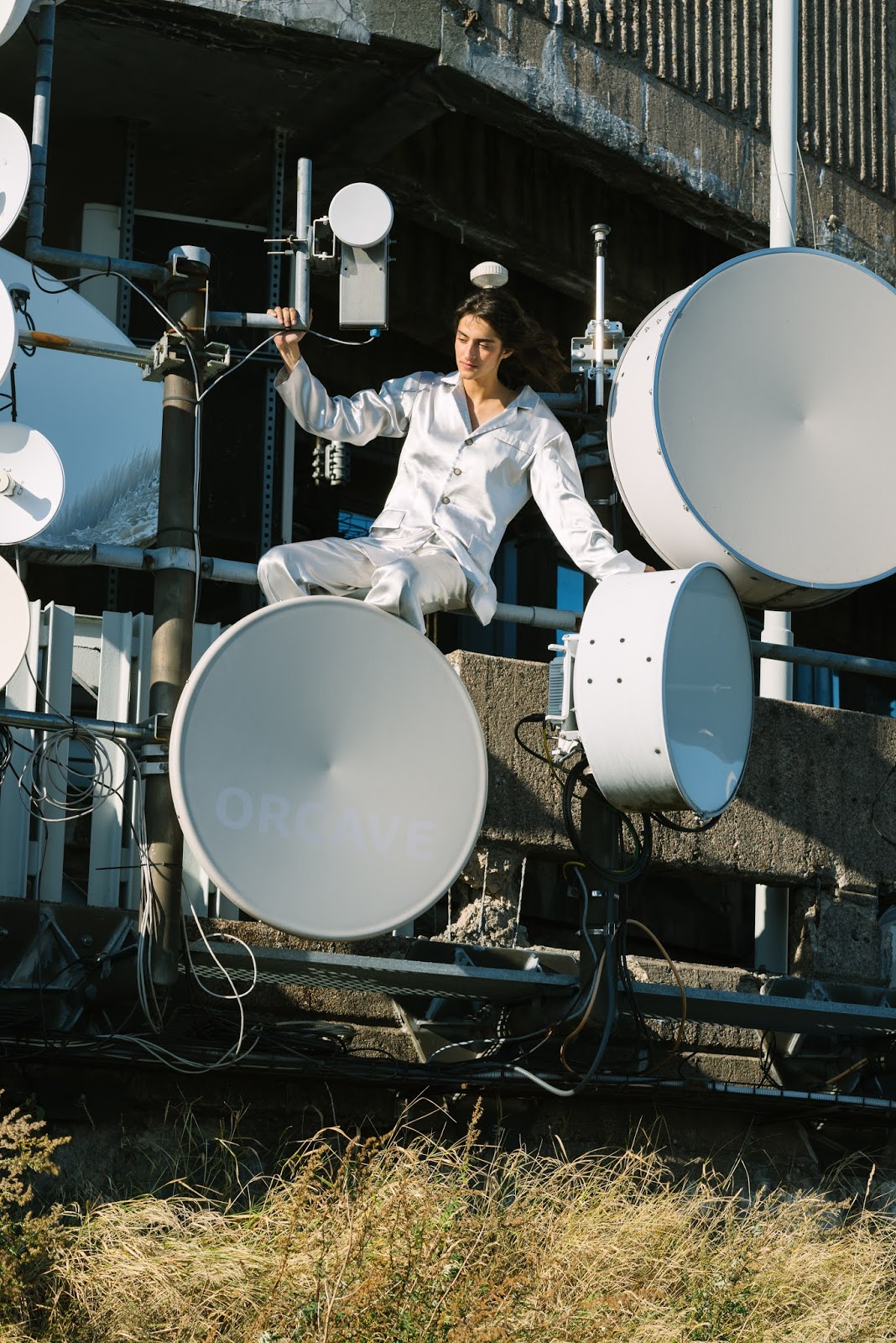 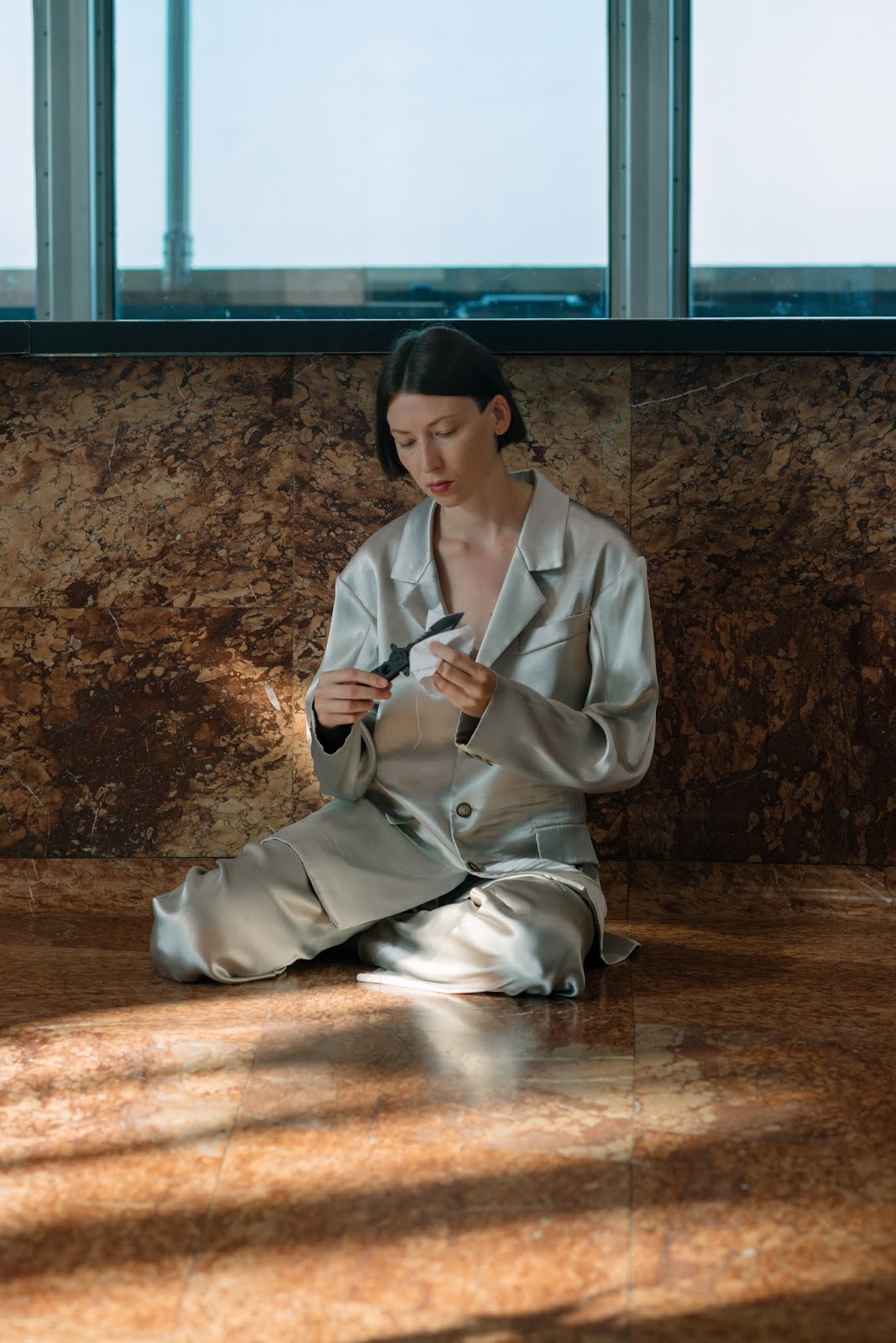 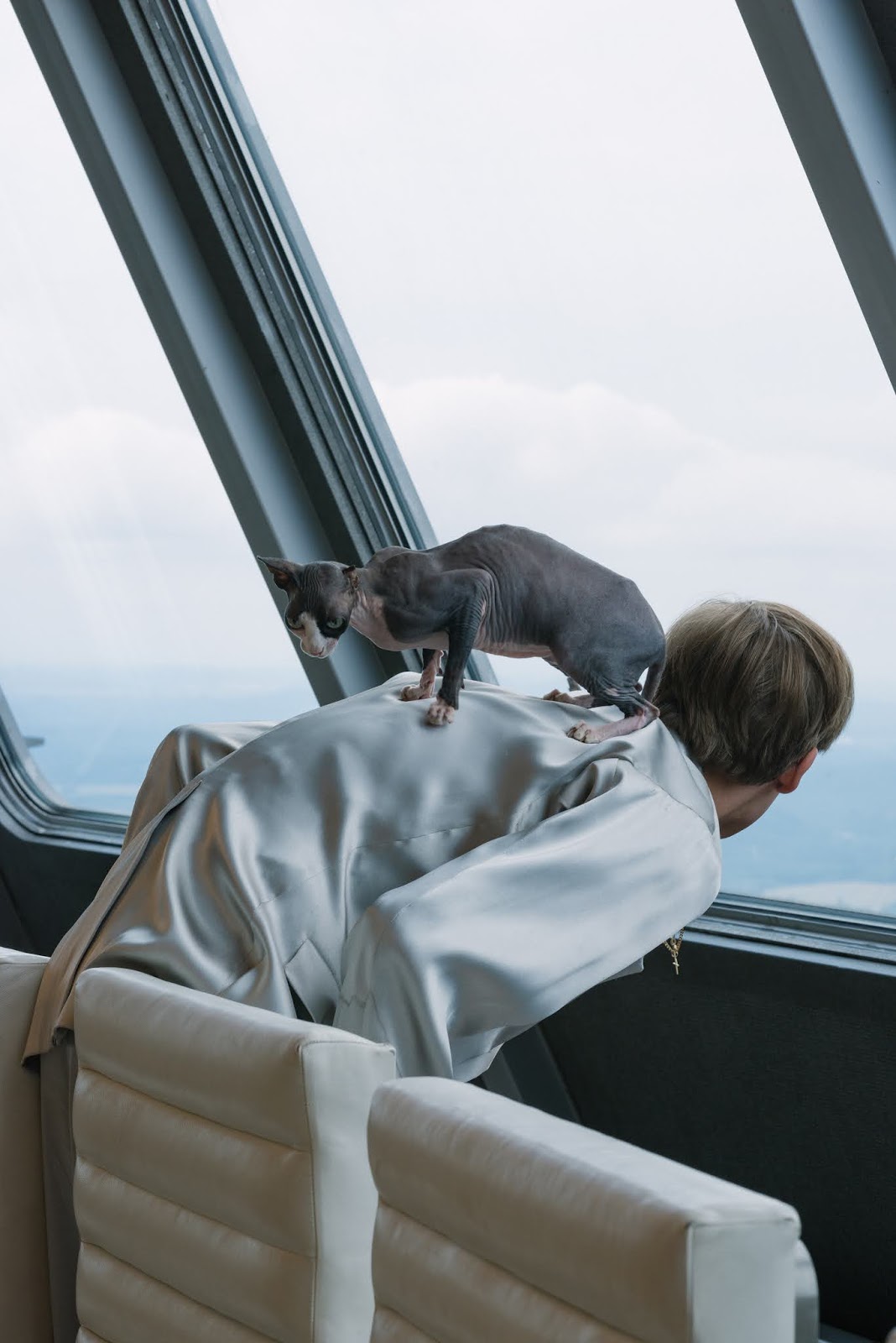 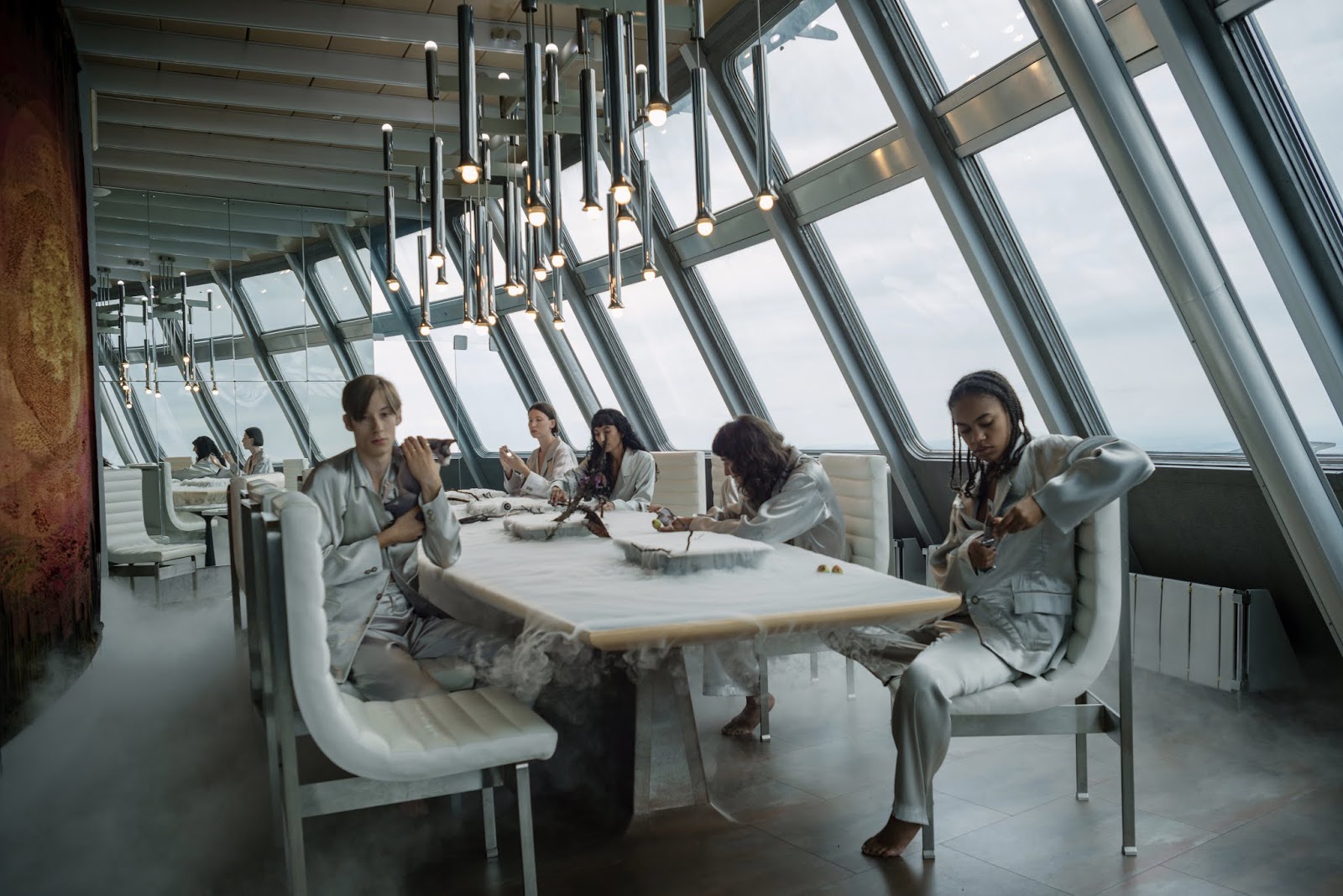 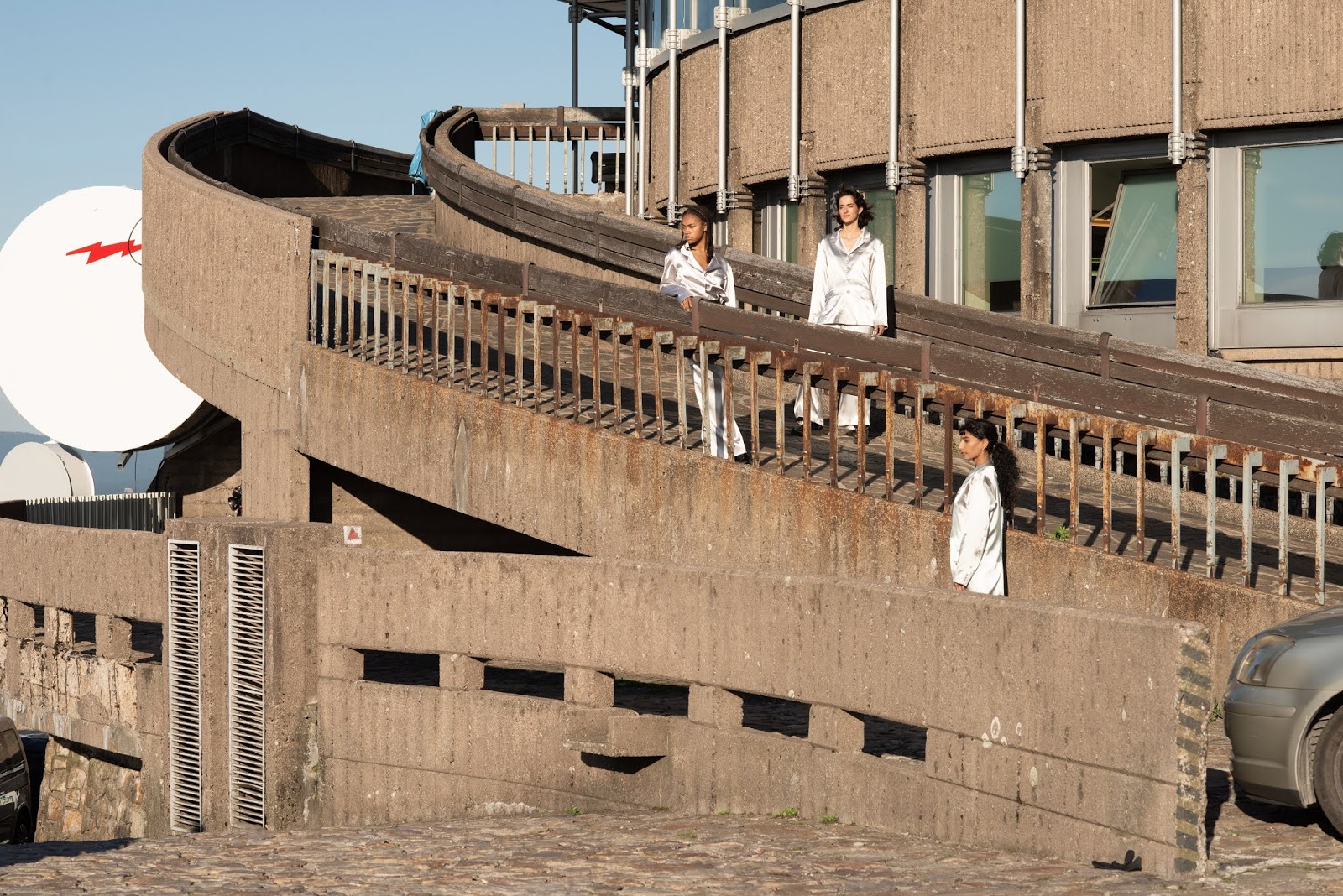 All images courtesy of the artist and gallery.

Klára Hosnedlová’s realistic embroideries explore societal pathologies as they crystalize in modern and contemporary design and architecture. Hosnedlová recuperates embroidery as a contemporary, technologically mediated imagemaking process. Archetypical depictions of femme figures captured in digital photography are transformed through a manual reduction of pixels. Rendered in silky threads on canvas, their hands and faces become a landscape of lighter and darker tones, dissolving into the sculptural frames made from materials found on-site of the photo-shoot.

Each work starts with a choreographed photoshoot in a specific site of historic value, often in modernist architecture. Hosnedlová’s current investigation is the iconic architecture of Ještěd Tower. Conceived by architect Karel Hubácˇek in the 70s, the hyperboloid shape tower was designed to naturally extend the silhouette of the mountain it tops. Three individual floors suspended on a steel structure embrace the space-age motif of the time: on the outer perimeter of the first floor, a glazed gallery opens directly into a spiral access ramp, leading to the aluminum-clad interiors and a restaurant with a panoramic view. Most importantly, the building also houses a radio and television transmitter, commemorated as the location of the first ‘free’ broadcast by then-president Vaclav Havel just after the Velvet Revolution ended in 1989.

The tower features many original art and design works, making it a capsule of the sentiment of the time. The cultural monument was added to the Indicative List to be included in the UNESCO World Heritage List in 2007. The title Fall of the Meteorites is taken from one of these artworks at the site, a monumental glass and cement relief by artists Stanislav.

I am interested in exploring how ornaments and design styles, as well as fictions and fashions, give rise to certain collective dreams or ideologies.
Klára Hosnedlová

The mold-melted glass elements on Hosnedlová’s recent wall objects were produced at the company founded by the famous glass sculpture and designer Jaroslava Brychtová.

Brychtová was born in 1924 in Železný Brod as the daughter of a well-known sculptor and developed a unique technique of mold melting glass. At this time, objects made of glass did not qualify as free but applied art. Therefore, it did not fall under the strict ideological control system that Stalinism applied to the cultural sector. At the age of twenty-six, she founded the Experimental Center for the Application of Glass in Architecture in 1950. Three years later, she began working with her future life and creative partner Stanislav Libenský. Together, they represented Czechoslovak culture at several World Expos until their glass sculpture The River of Life got severely criticized by government officials for its anti-occupation politics. Both artists were expelled from the communist party and the work had to be altered overnight before its inauguration. Their artistic legacy is still very prominent on many public buildings, such as the Ještěd Tower.

Their artistic legacy is still very prominent on many public buildings, such as the Ještěd Transmission Tower.

Klára Hosendlová’s approach to portraiture is informed by her background in painting, but she often crops the faces of figures out of compositions. What’s left resembles snapshots, playing with the idea of the feminine mystique. The close cropping of these images suggests the rapid circulation and visual saturation of the digital realm. There is something absurd about embroidering these images, transferring lightning-fast digital photography to the slowest medium of all.

Her work cycles are linked by an epistolary narrative that scrutinizes facile fictions about nostalgia, progress, and future and how these developed from the modernist era to the present. There are certain ways of life, gender roles, and ideals inscribed in interior design and architectural spaces. Her installations investigate the history of forms and habits that are proposed by these spaces, as she feels that the 20th-century avant-garde ideas of technical solutionism and aesthetic refinement are still very relevant today.

Sexuality & Space is a book edited by curator Beatriz Colomina, comprising essays from the seminal 1990 conference at Princeton University on gender as addressed from within the discipline of architecture.

Sights is an evolving exhibition format bridging physical and online spaces. Unfolding over the next months, works by Klára Hosnedlová, Ambera Wellmann, Guan Xiao, Florian Auer, Johannes Paul Raether, Alexander Carver, Anna Uddenberg, Avery Singer, Pieter Schoolwerth and GCC will be the focal point of our conversation to share multiple views and perspectives on the artists’ practices. The physical presentations at the gallery, or at different locations all over the world, are augmented with texts, conversations and audio-visual material that is assembled on our digital communication platforms.

The format draws inspiration from Karen Barad’s diffractive readings, building insights predicated on interference and entanglement. With the perimeters between on- and offline changing, we find exhibition making tangled in biophysical, geophysical, political, economical and technological flows. Sights aims to maintain and expand this fluid, constant movement by going beyond the object and feeding back the odd and open ends of research into the exhibition practice. It may not dissolve the rigid frameworks of online communication platforms or the gallery space, but it may allow us to attune ourselves during times of fluid shifts.

Sights #2 Fall of The Meteorites
Fall of The Meteorites by Klára Hosnedlová features the artist’s hyper-realistic embroideries, transforming digital images through a manual reduction of pixels looking closely into the societal pathologies as they crystalize in modern and contemporary architecture.

Sights #3 UnTurning
UnTurning by Ambera Wellmann explores unsettled intimacy. The painting includes cutouts of paintings that have been reassembled, then painted over and around. Unfolding on a vast horizontal canvas, fragmented figures turn the gaze inside the body, creating space that resists heteronormativity and hierarchies between different bodies.
Tags Berlin, Klára Hosnedlová, Kraupa-Tuskany Zeidler
Newer Post Older Post Home