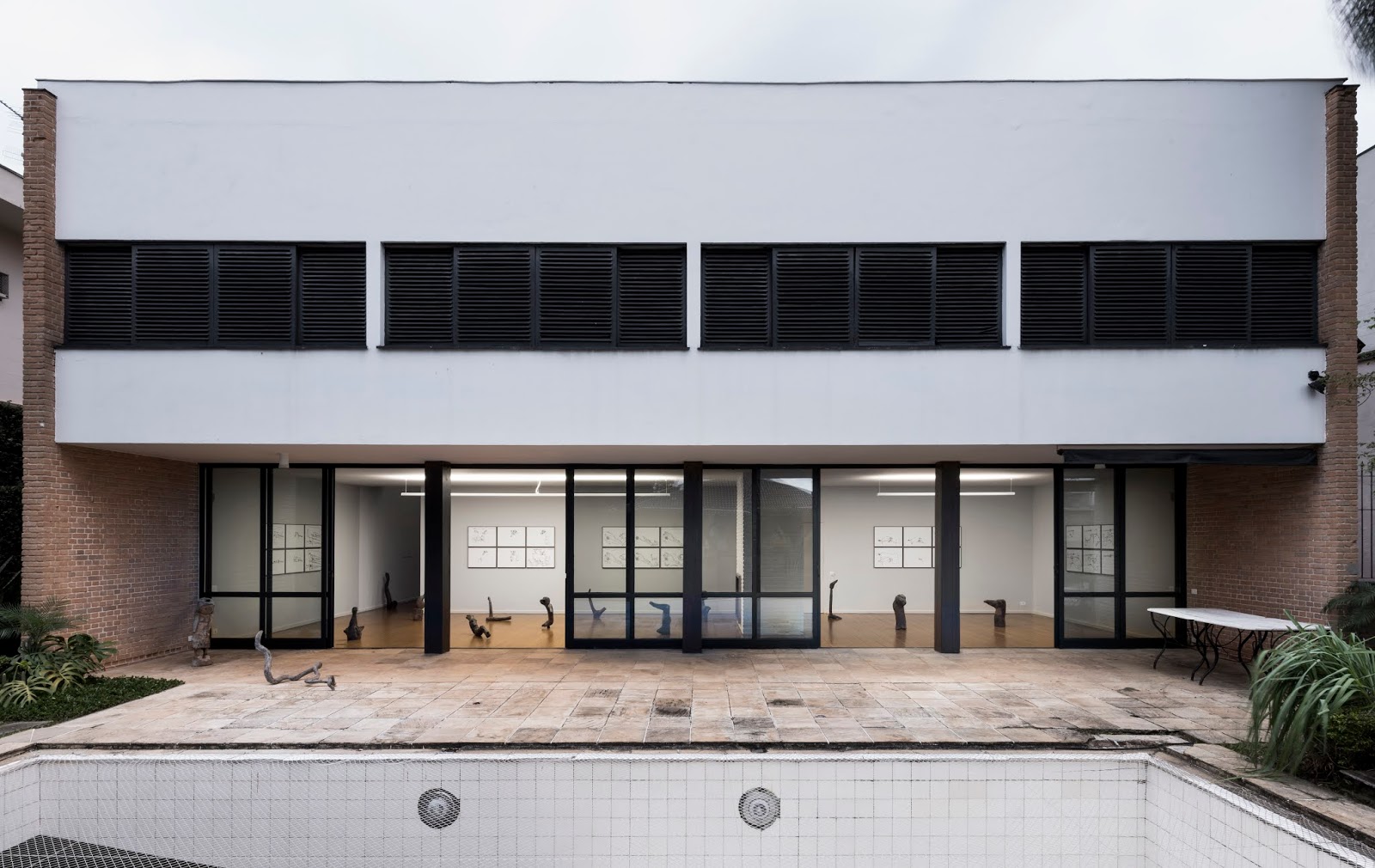 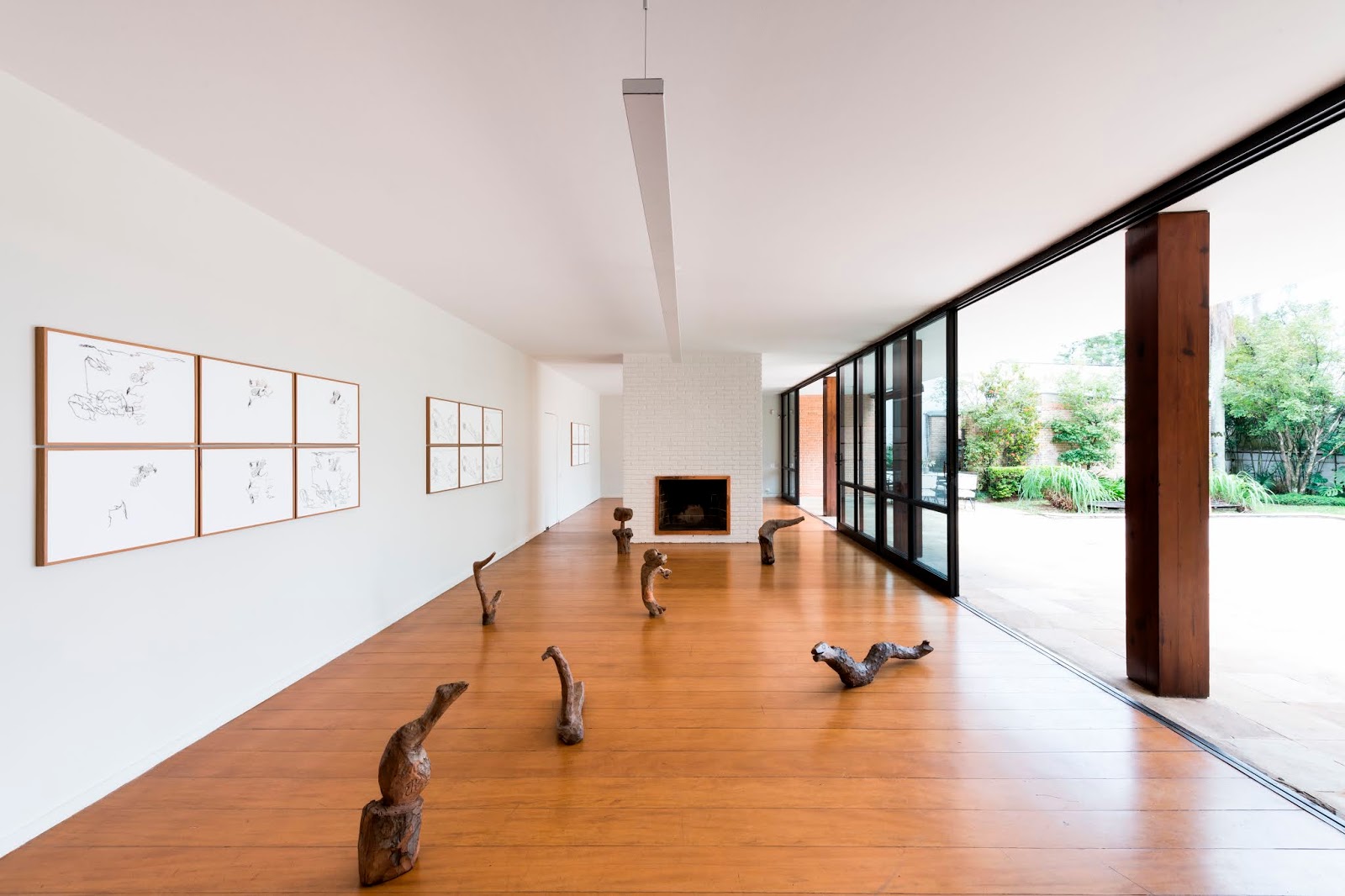 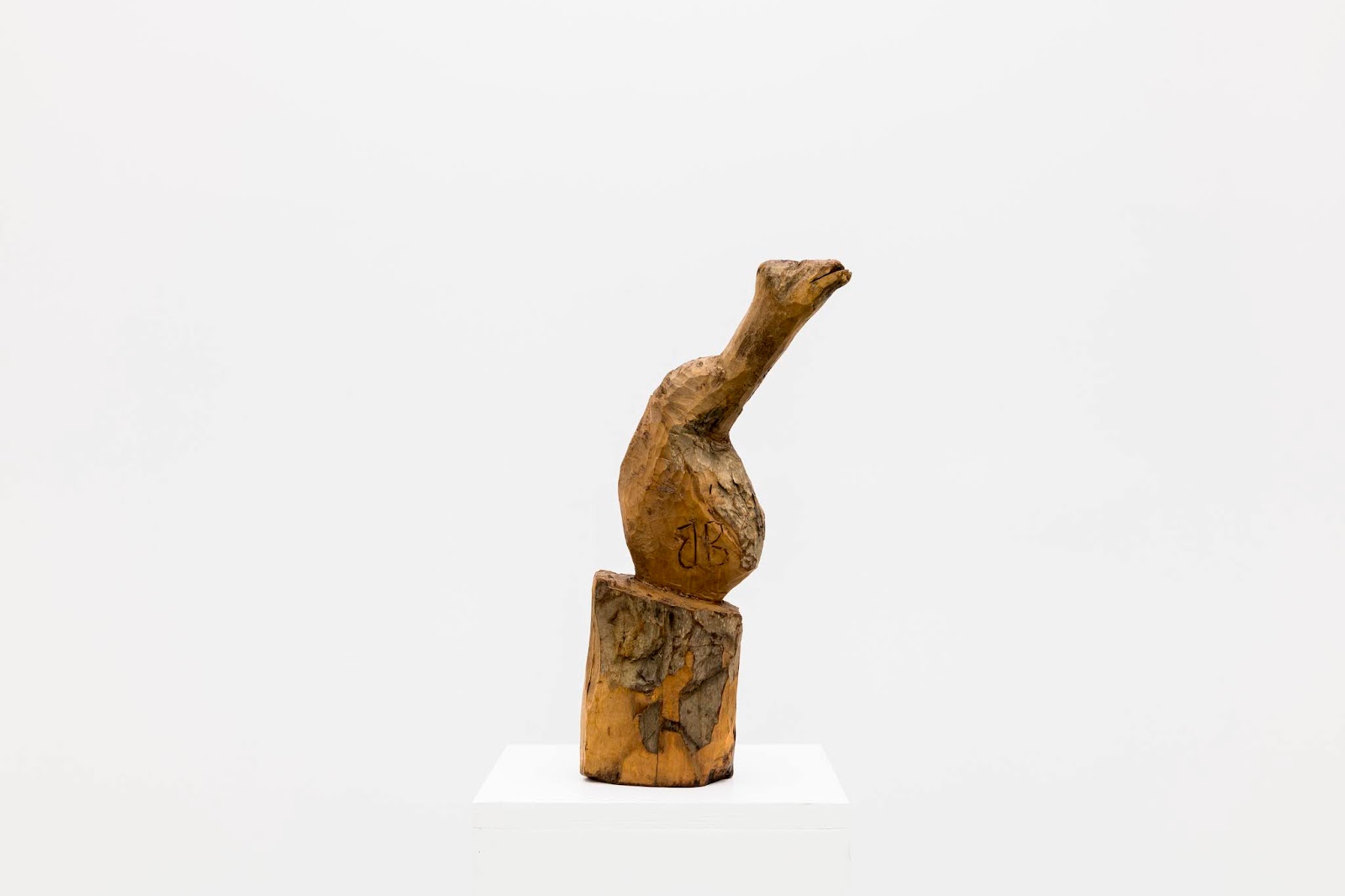 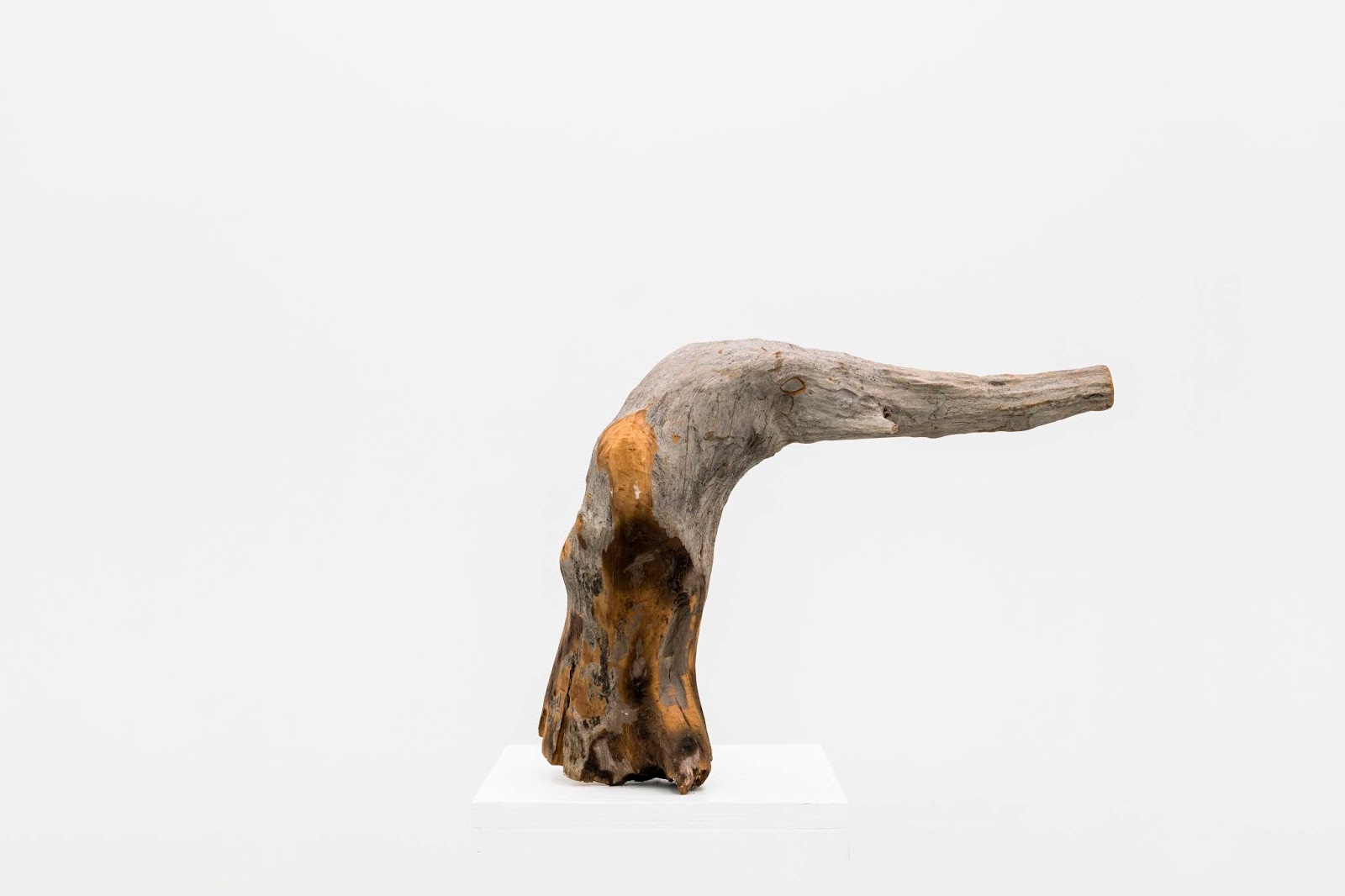 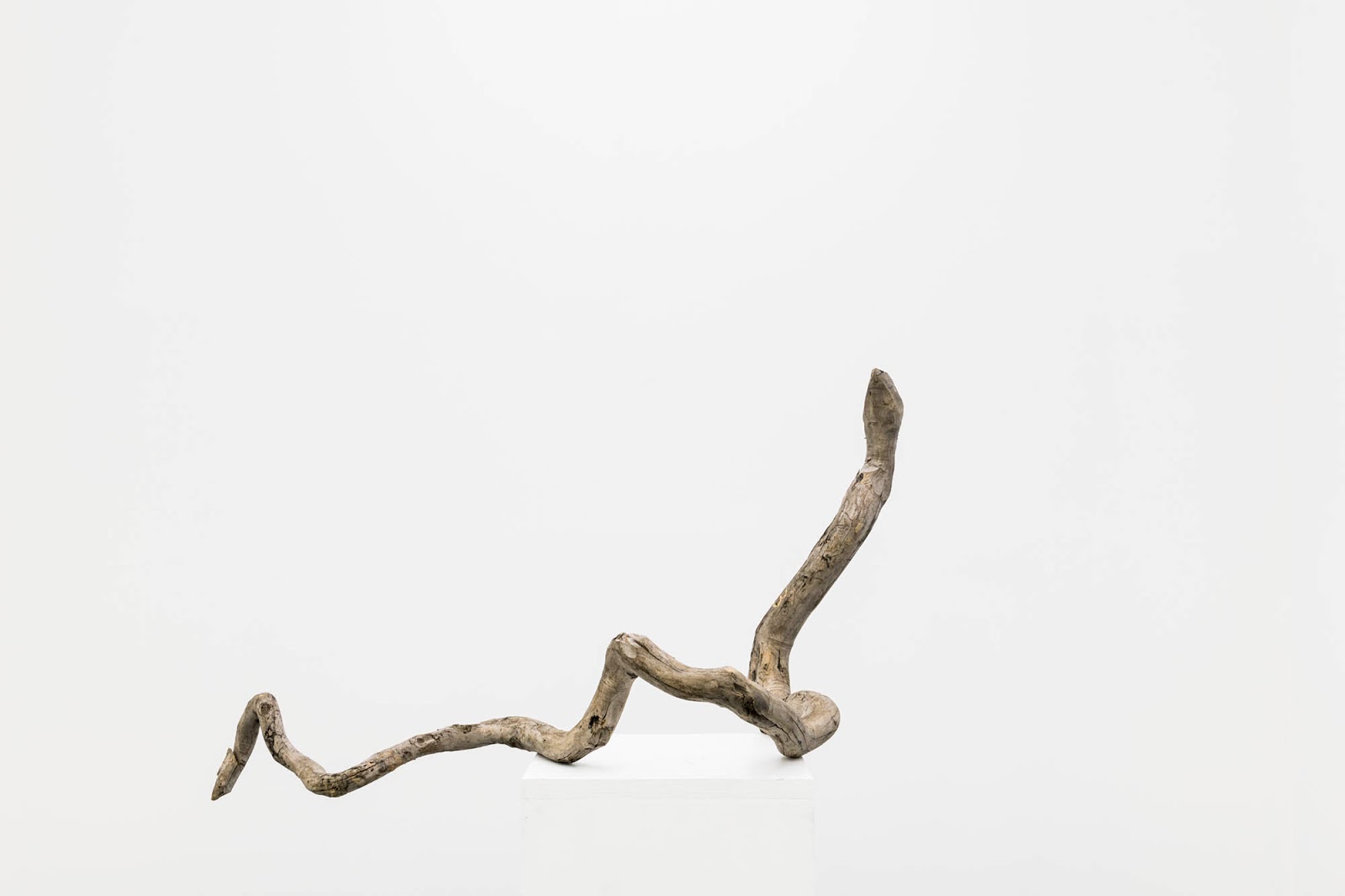 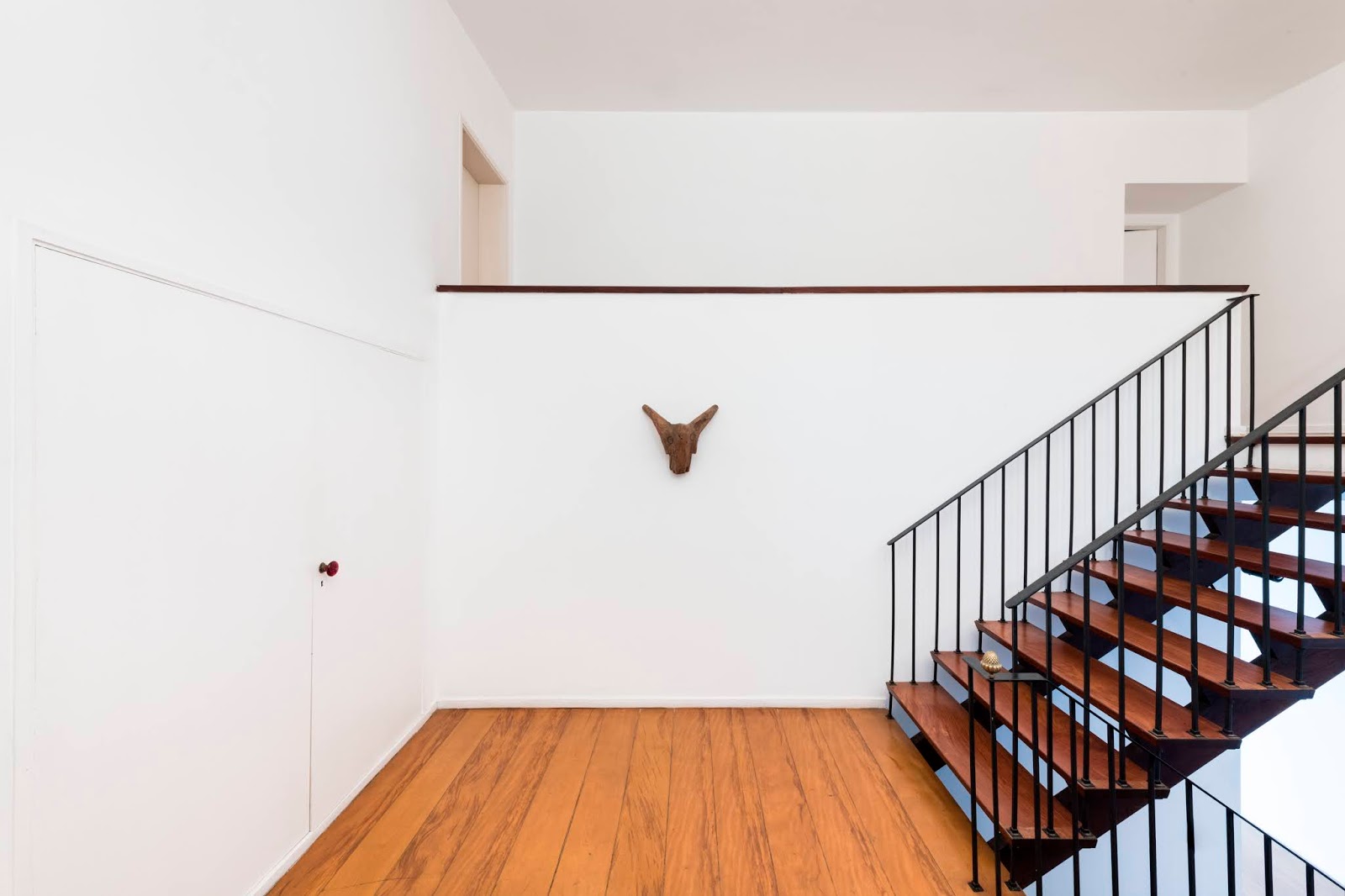 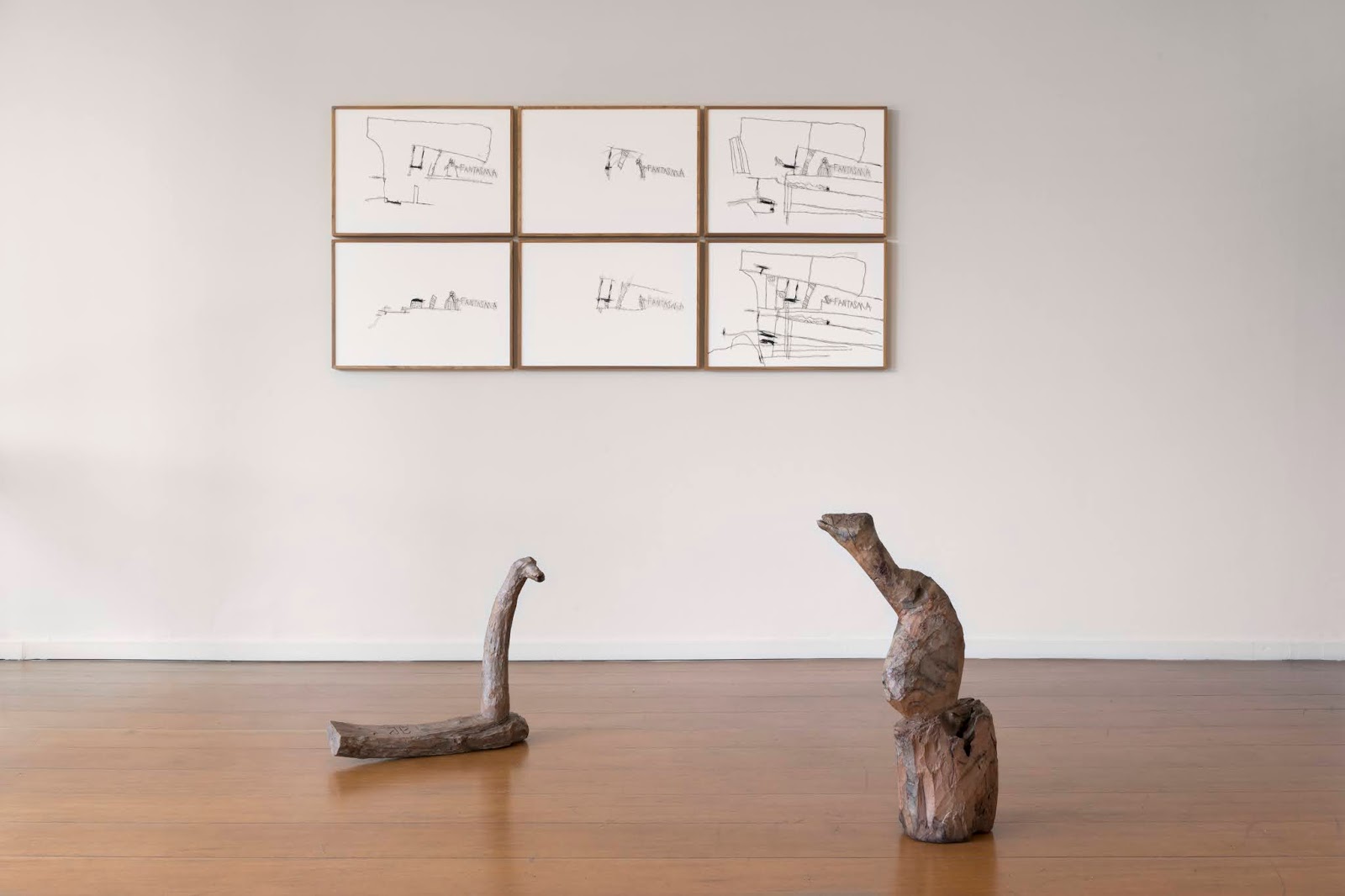 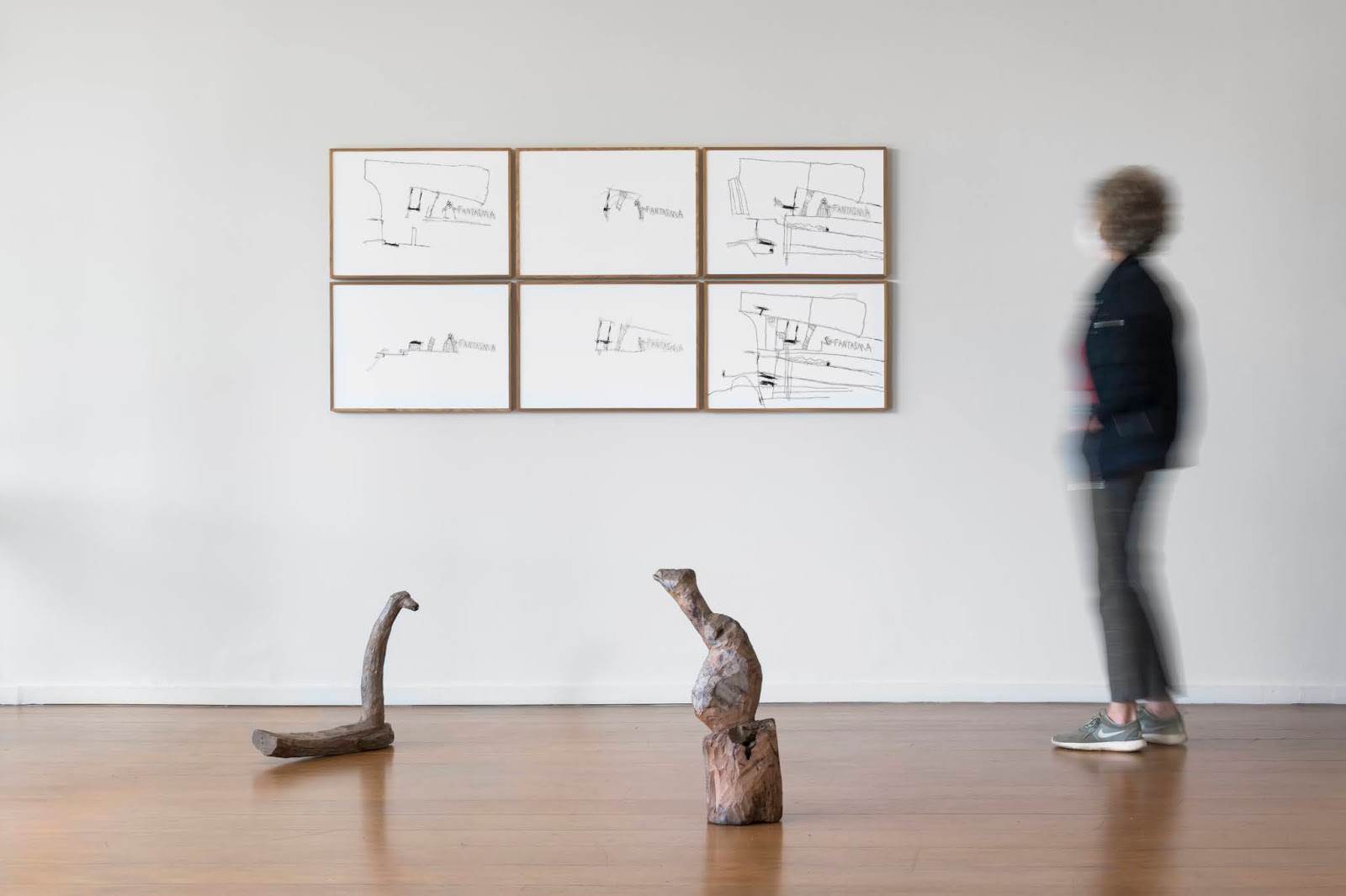 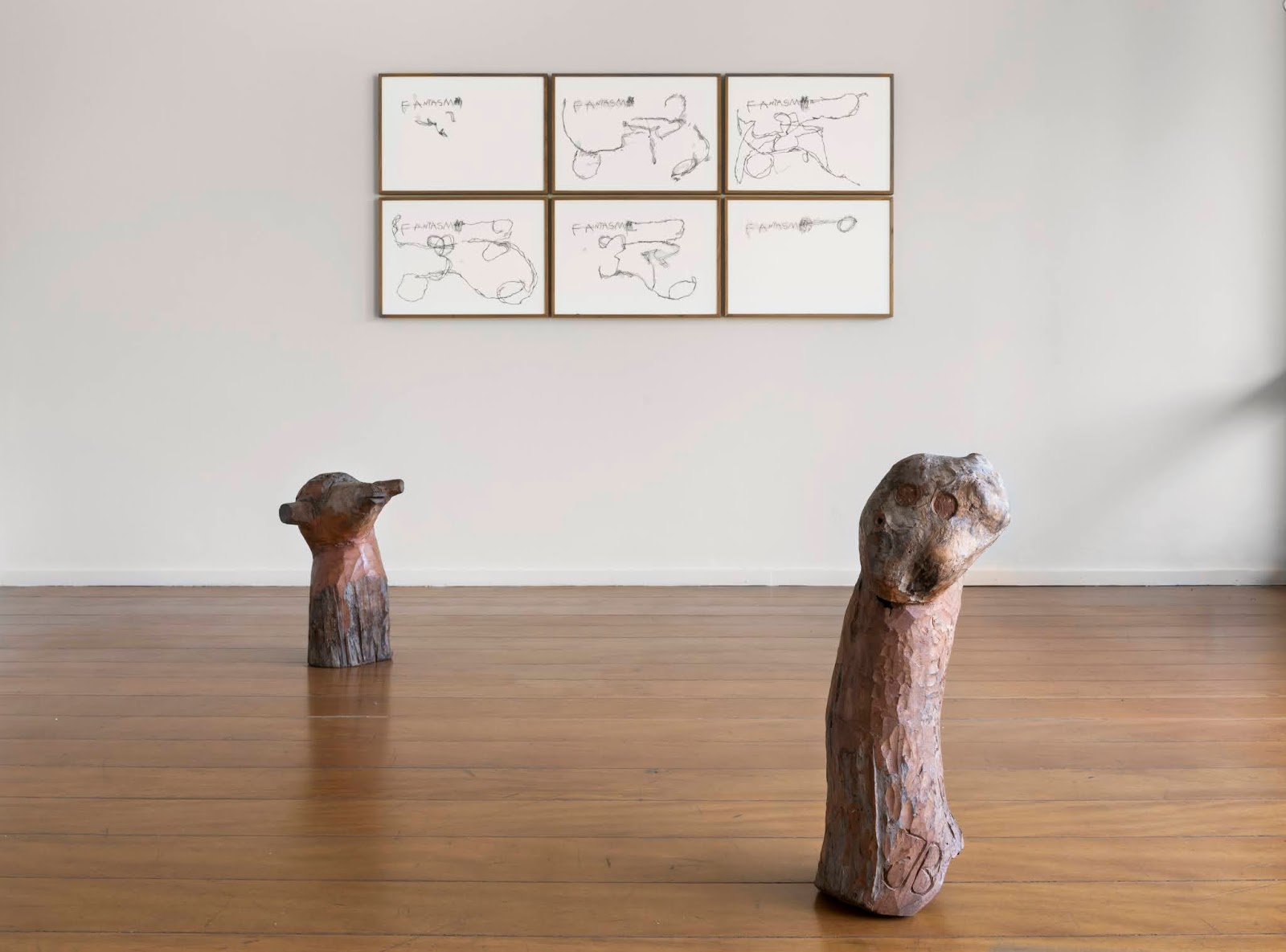 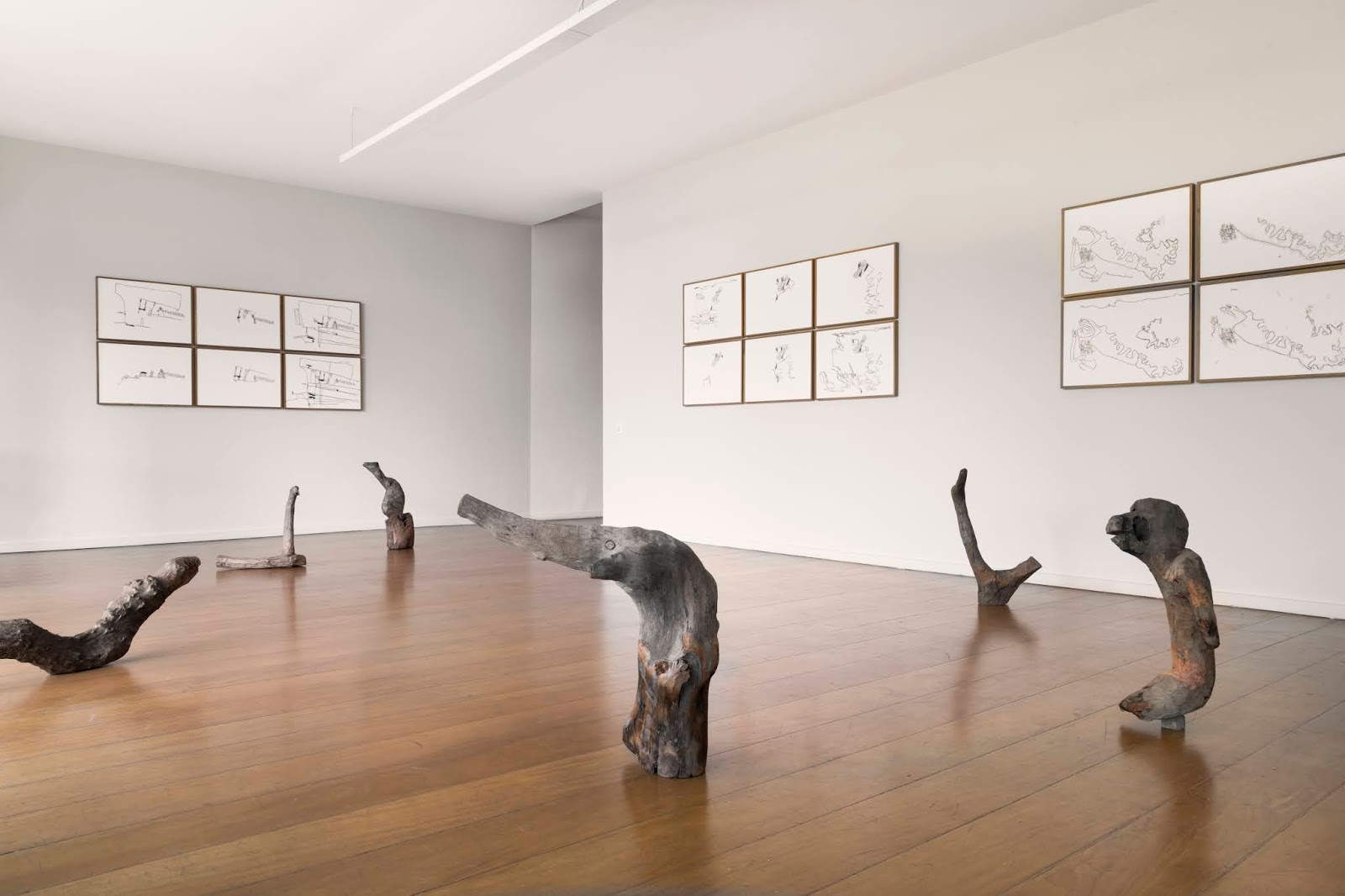 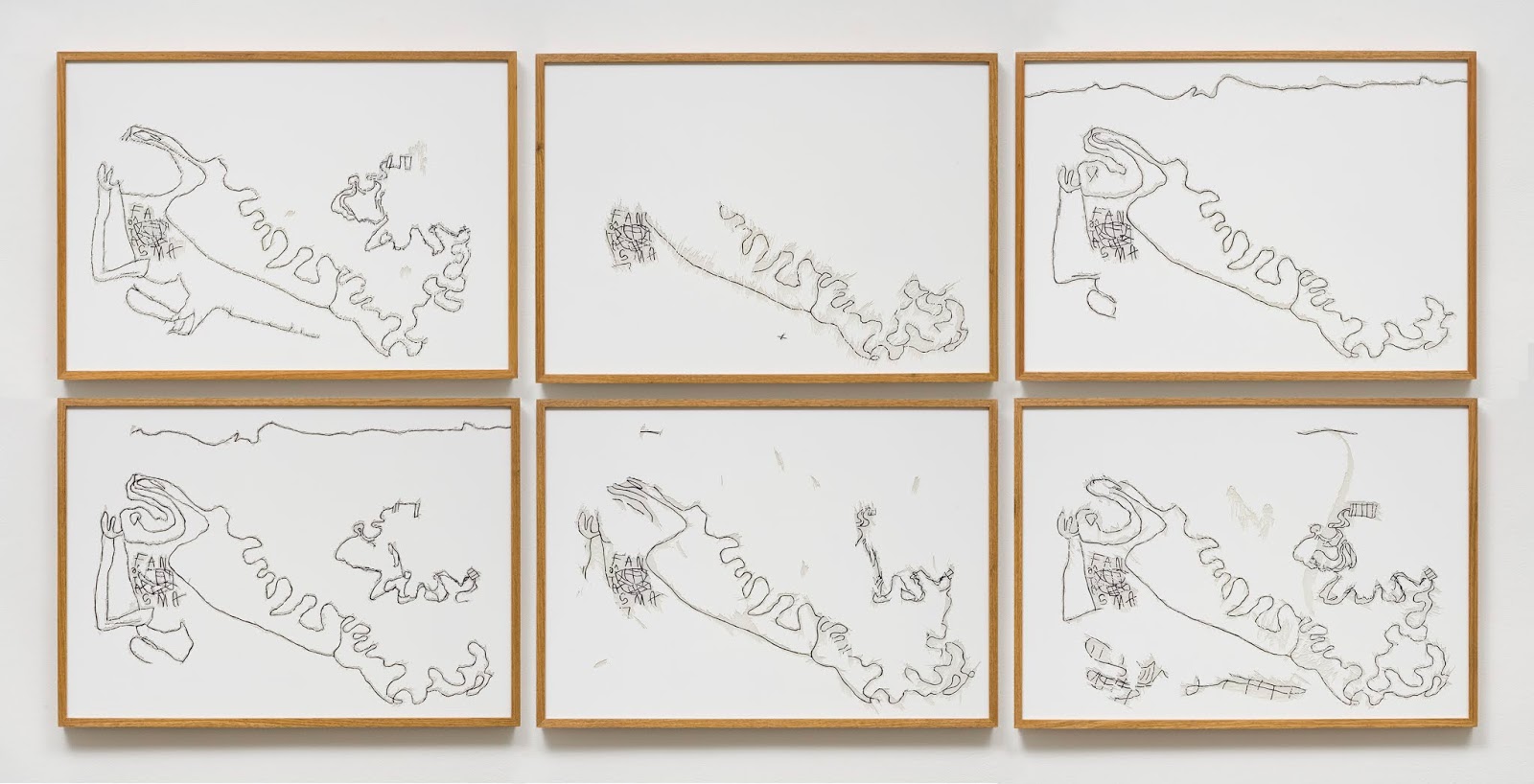 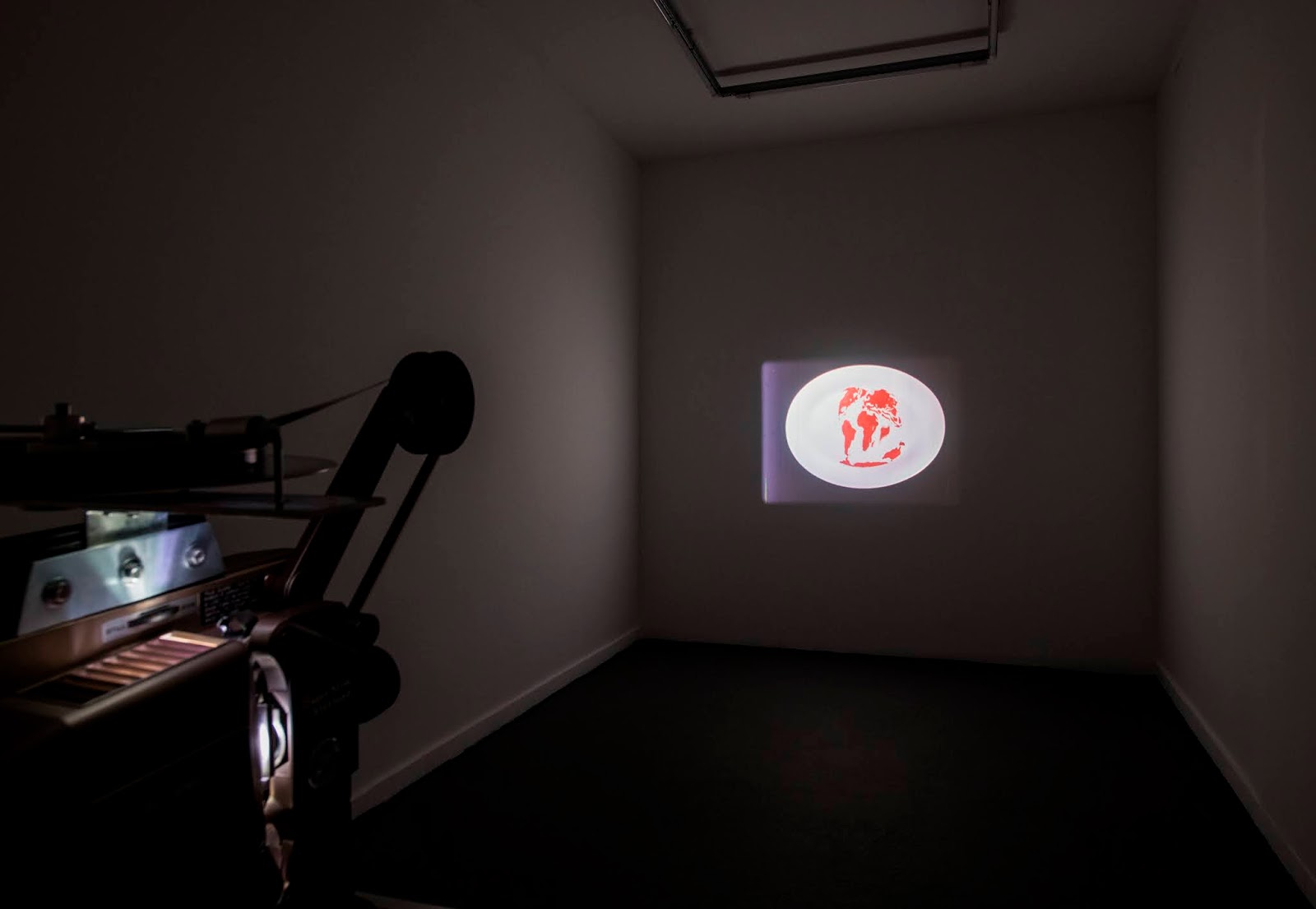 auroras is pleased to present the exhibition “Acauã and the Ghost”, a relationship between the work of Rivane Neuenschwander and José Bezerra. Neuenschwander shows for the first time in Brazil the complete series of Caça ao Fantasma (2018) while Bezerra displays sculptures around the space.

In a set of five works made up of six-part polyptychs, Caça ao Fantasma shows attempts to reveal the word “ghost” on maps hidden by white paint. Six different people were invited by the artist to scrape with the stylus the same drawing made by a child. In these works we see the registration of different sensibilities in access to a veiled form, like in a scratch-off. This groping drawing also refers to the slug trail that drew the series of works A Aturdita developed by Neuenschwander in 2014.

Similarly, José Bezerra's sculptures also seem to reveal a drawing hinted in the founded wood, giving shapes that are part of the artist's imagination. Bezerra sees images of animals he ate on the trunks, branches and roots. With the gouge, he carves the wood to make the figure appear, which still does not lose its link with the vegetable matter.

Curated by Gisela Domschke, the exhibition opens a dialogue between two distinct practices, which address desire as the production of the real, whether in Neuenschwander's ghost with psychoanalytic contours or in Bezerra's pulsating form. Both can be seen as different perspectives on being in this world, its external and internal distances, its variations that relate, its differences that reveal the multiple views of the point.

In the opening, it is foreseen the screening of the film on film Pangaea’s Diaries (2008) by Neuenschwander, where ants interact with a world map made of thin slices of meat in the form of the supercontinent, which existed 300 million years ago.

Rivane Neuenschwander (1967, Belo Horizonte) graduated from the Federal University of Minas Gerais in 1993 and took an extension course at the Sculpture Department of the Royal College of Art in London. Neuenschwander's work has been the subject of individual exhibitions in places such as the Rio Art Museum - MAR (2017); Museum of Modern Art (São Paulo, 2014); New Museum of Contemporary Art (New York, 2010); Malmö Konsthall (Malmo, 2010); Tokyo Palais (Paris, 2003) and Walker Art Center (Minneapolis, 2002). She also participated in the Istanbul Biennial (1997); São Paulo Biennial (1998, 2006 and 2008); Venice Biennale (2003 and 2005); and the Carnegie International, in Pittsburgh (2008). In 2004, she was selected for the Hugo Boss Award at the Guggenheim Museum in New York, and in 2013 she was awarded the Yanghyun Award by the Yanghyun Foundation in South Korea. Her work is in the most important art collections such as MoMA's - Museum of Modern Art (New York); Fundación Jumex Arte Contemporáneo (Mexico City); Tate Modern (London); TBA-ThyssenBornemisza Art Contemporary (Vienna); Solomon R. Guggenheim Museum (New York); Inhotim Institute (Brumadinho).