Calla Henkel and Max Pitegoff at the Downer / Berlin 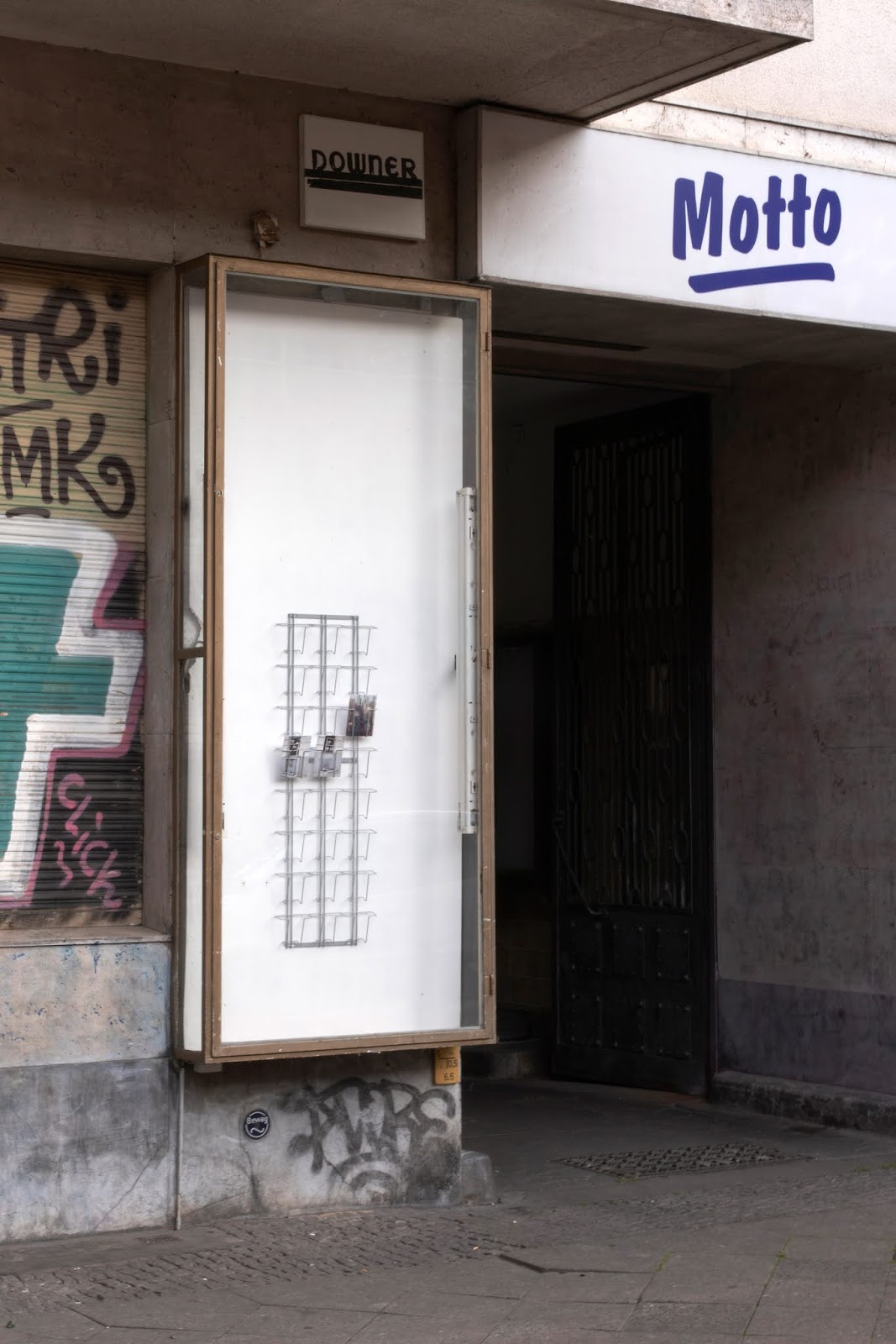 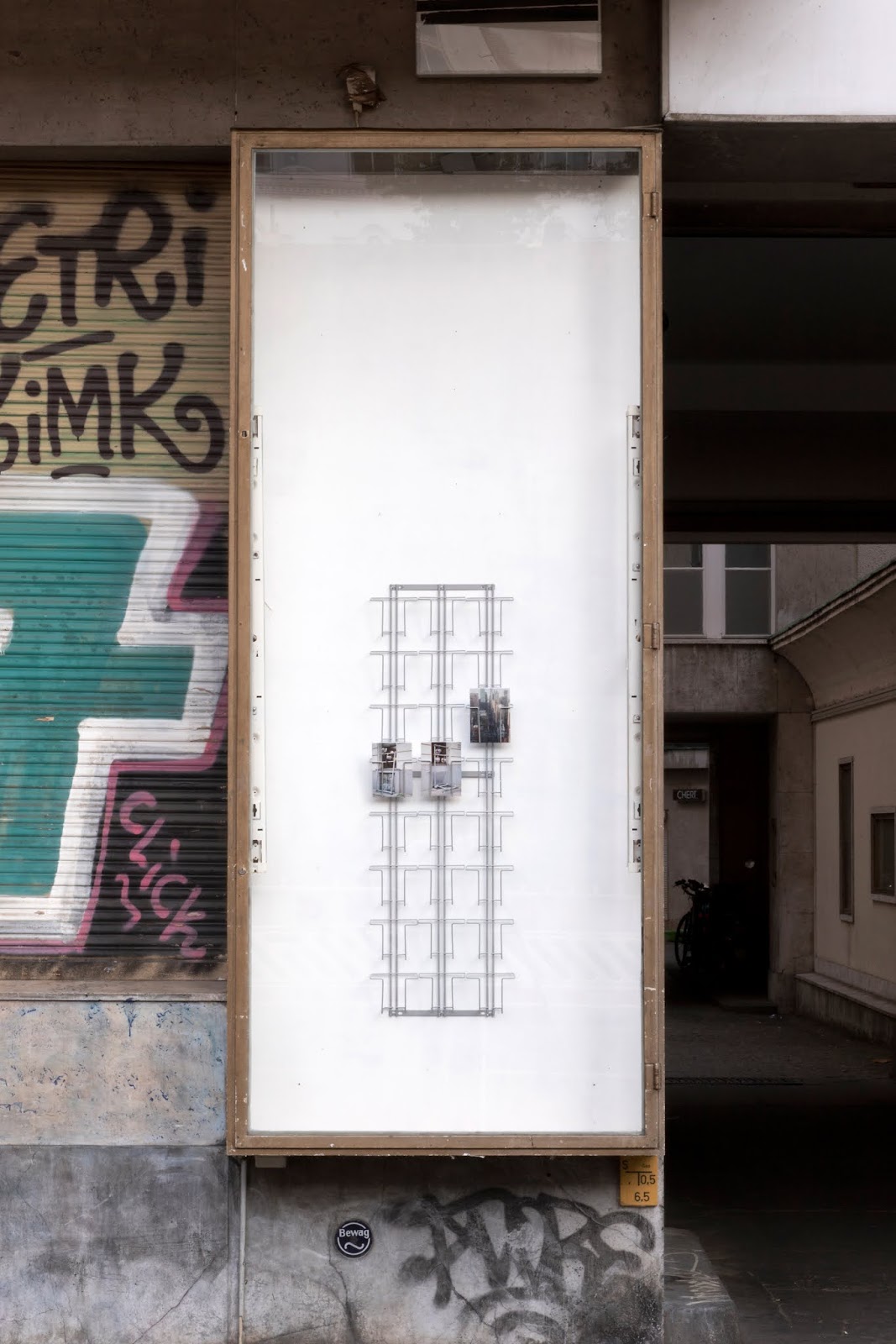 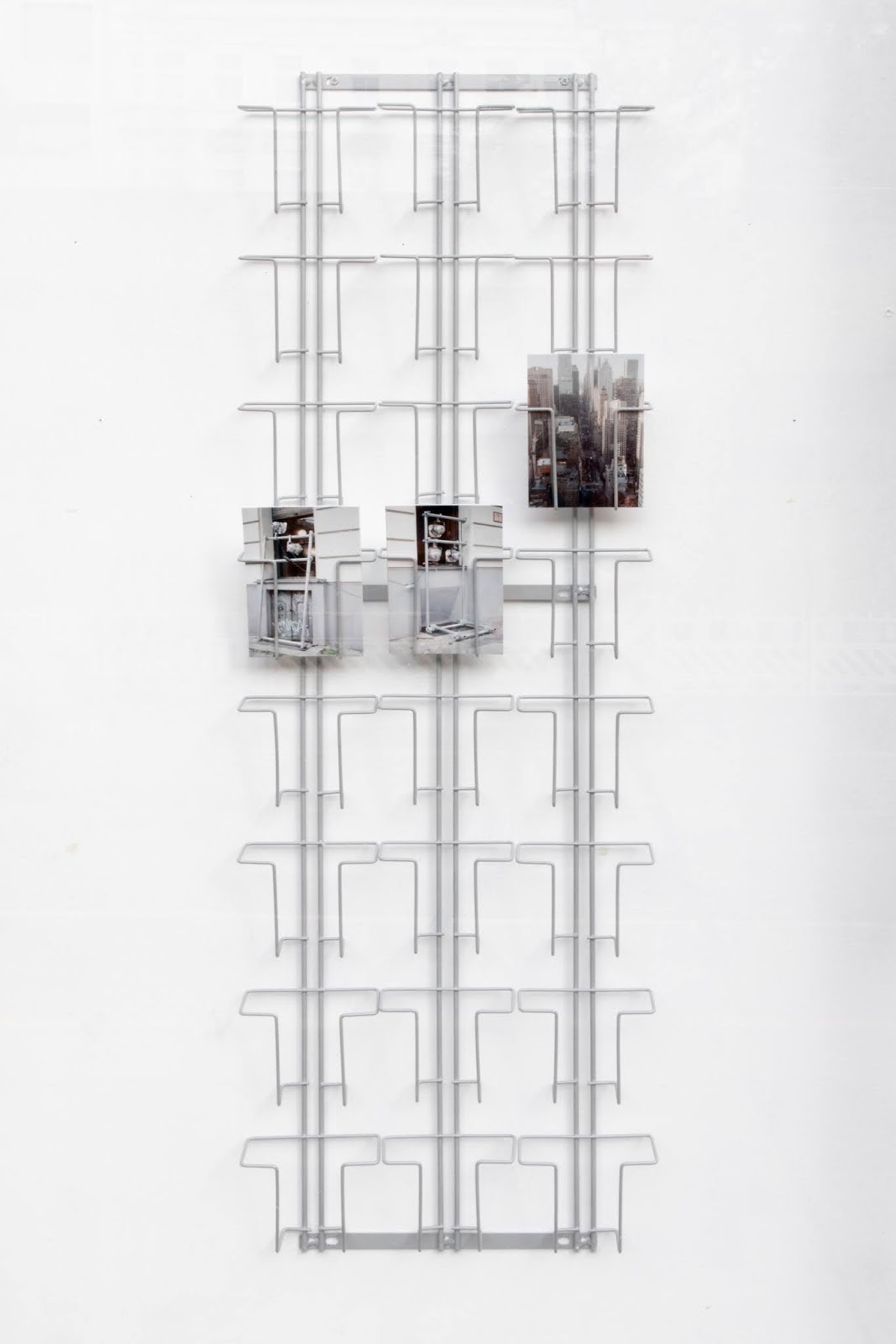 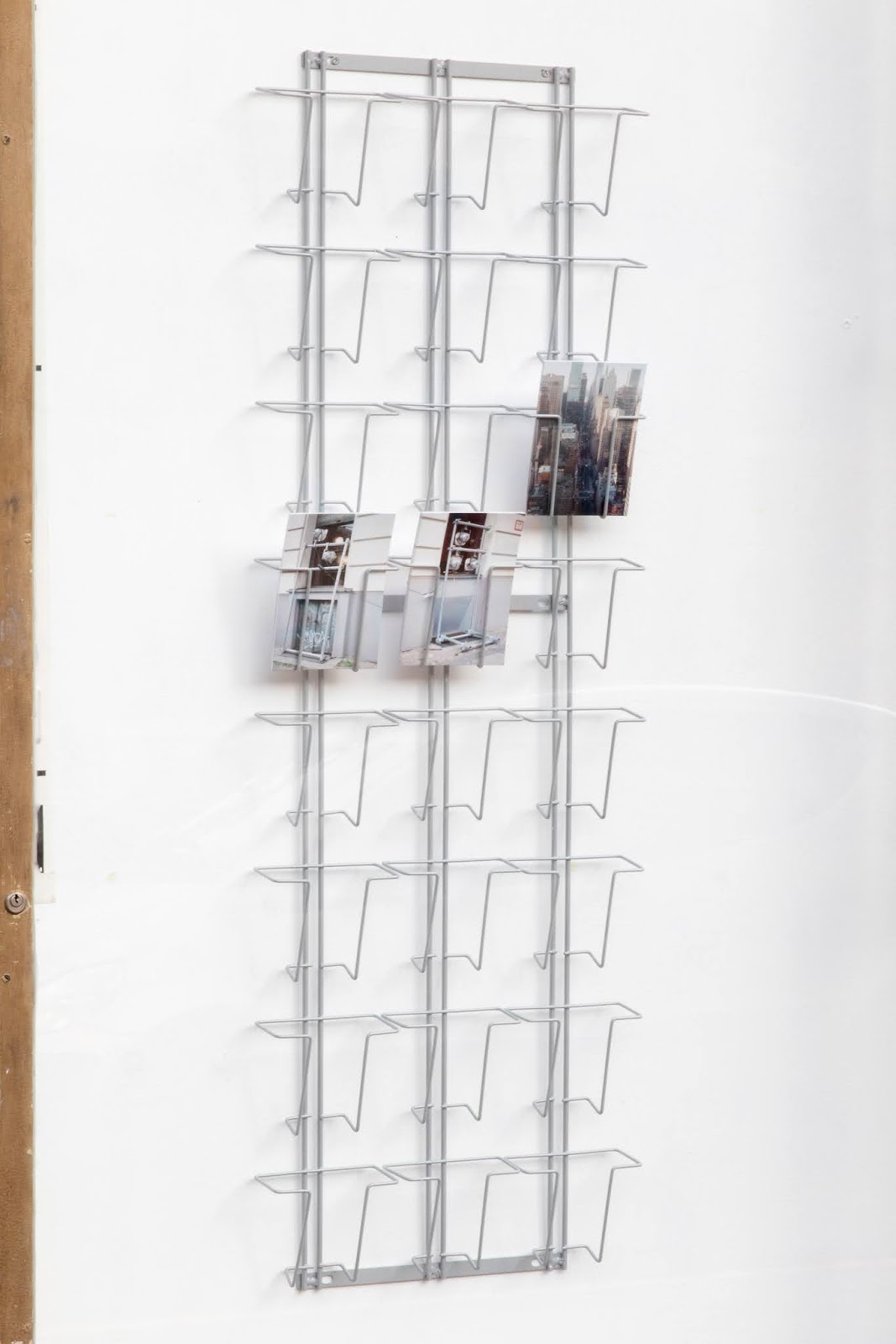 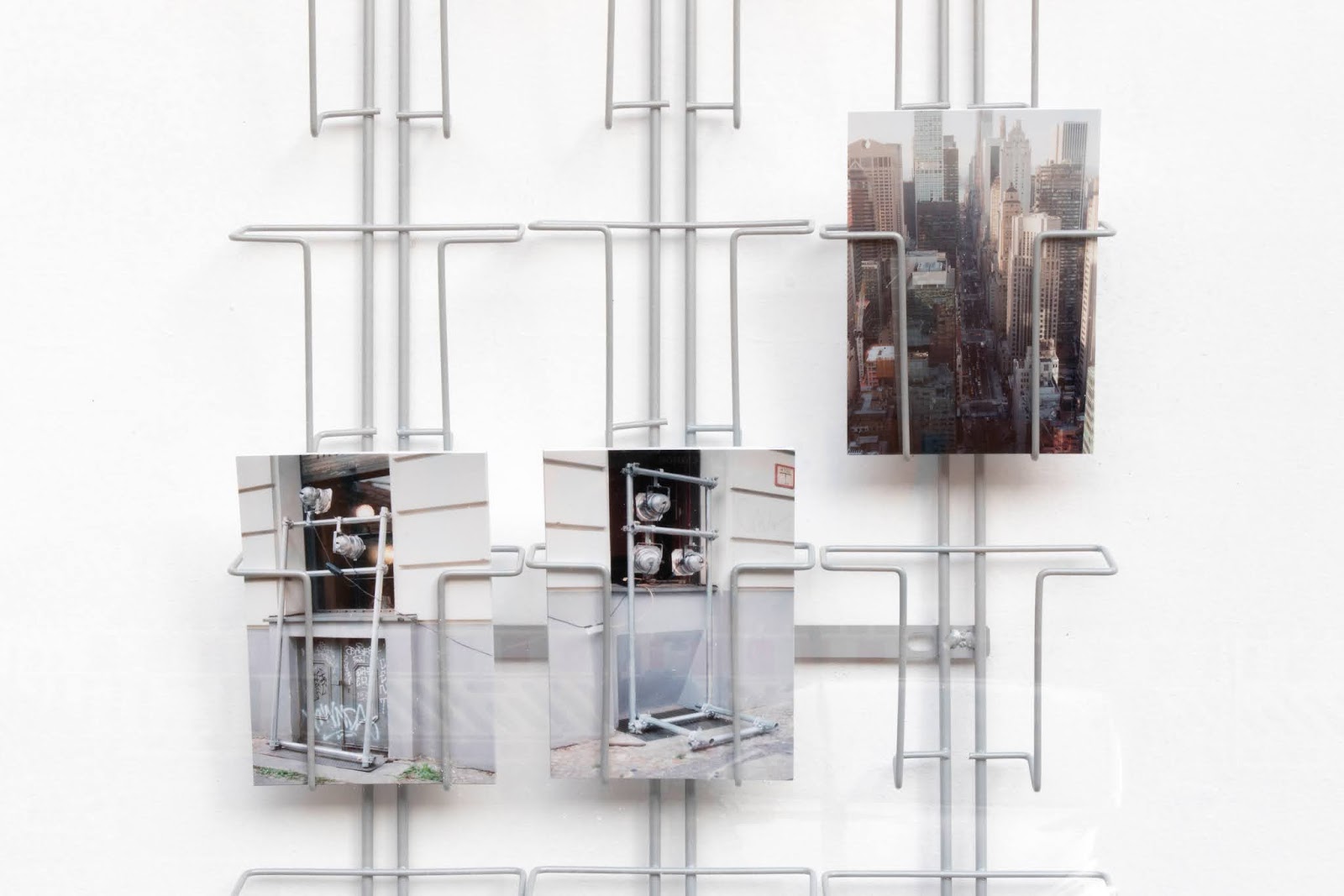 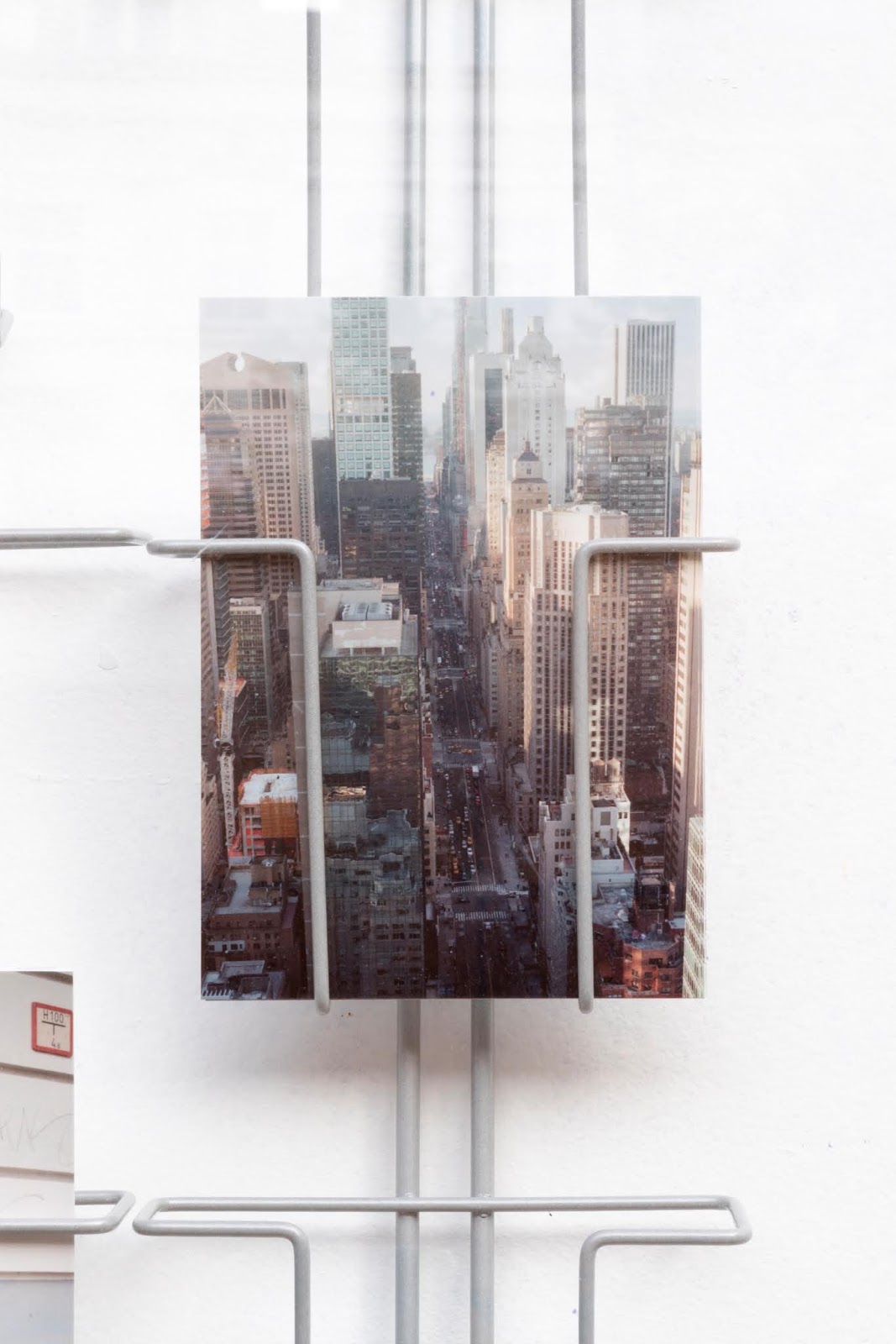 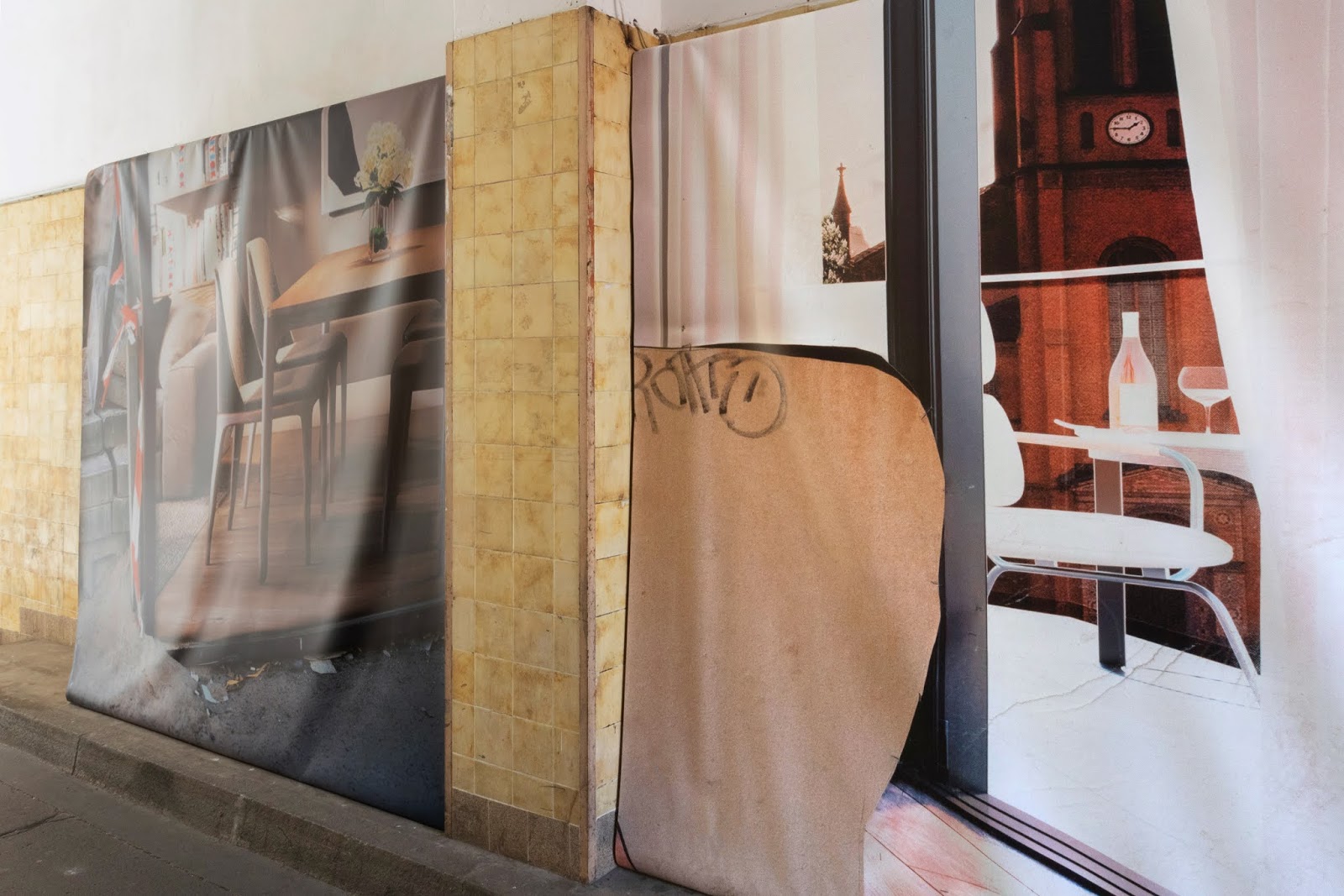 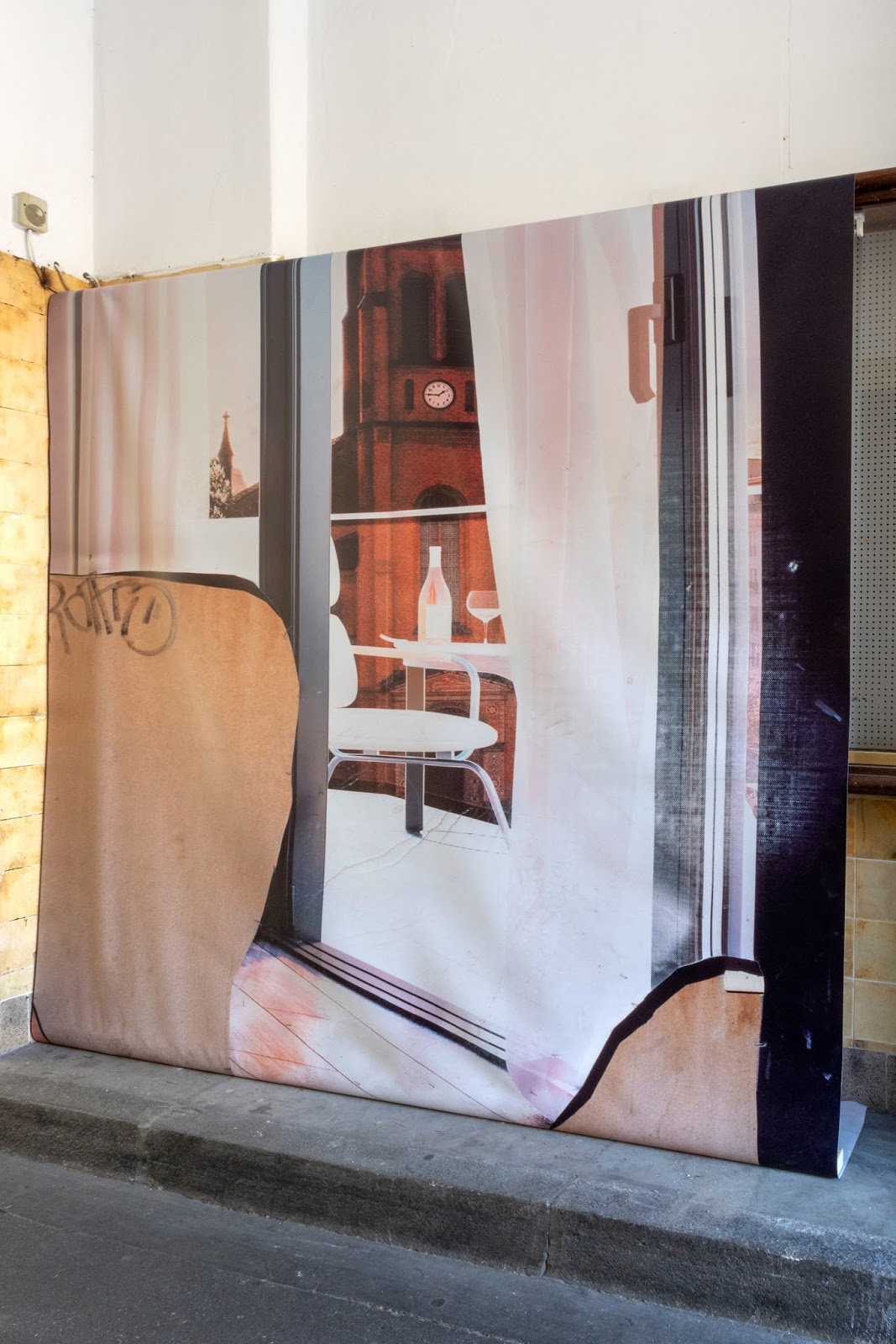 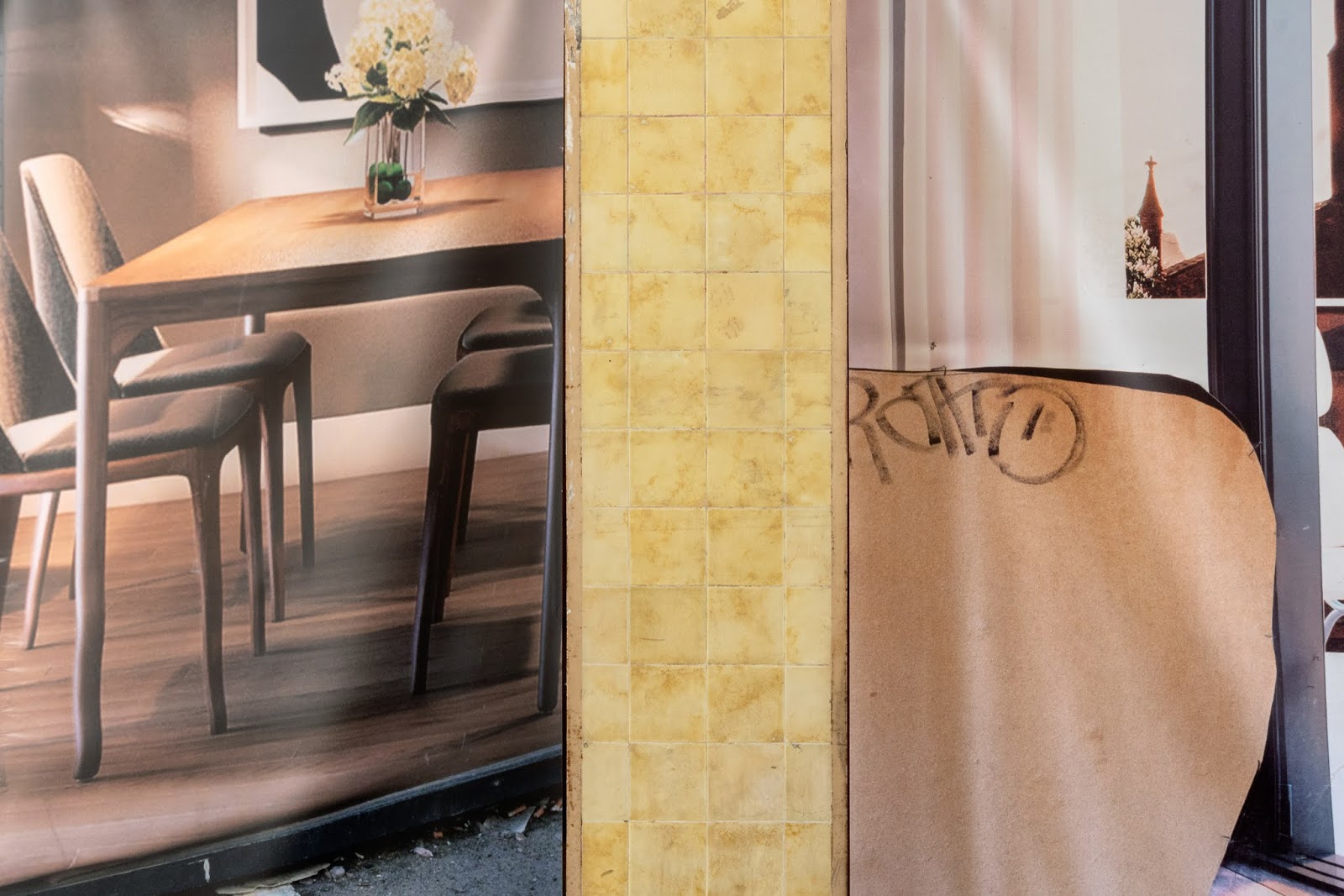 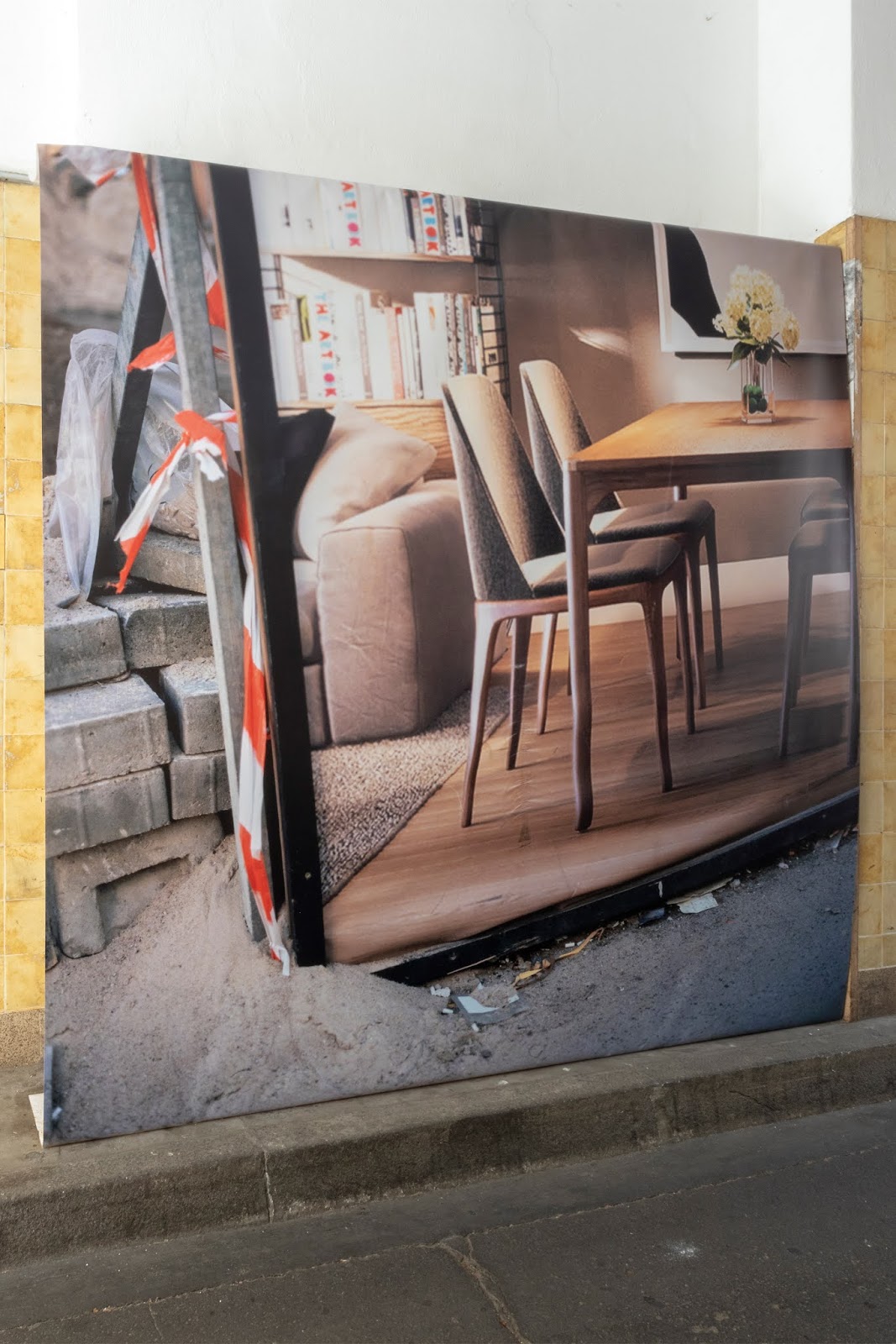 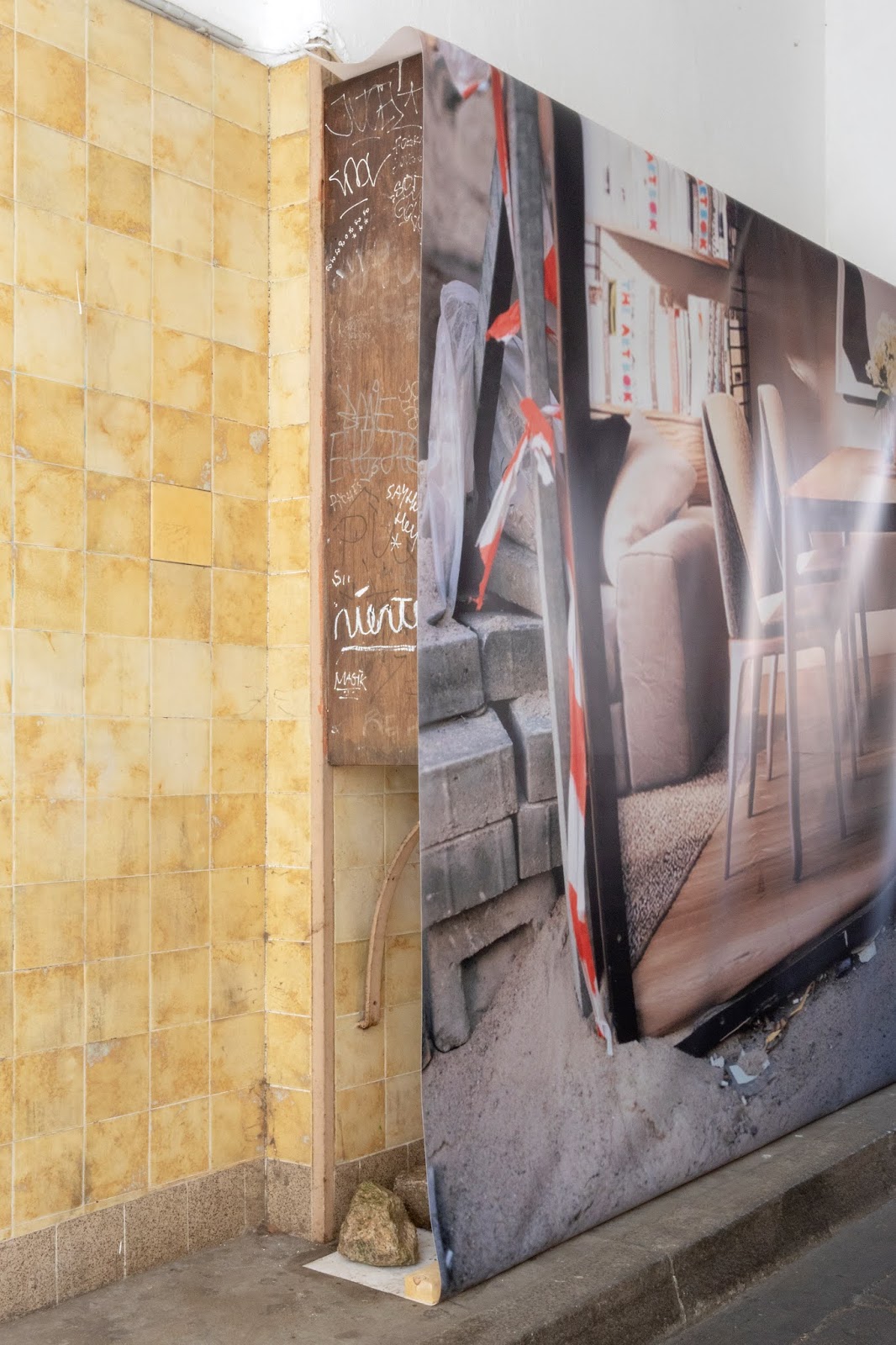 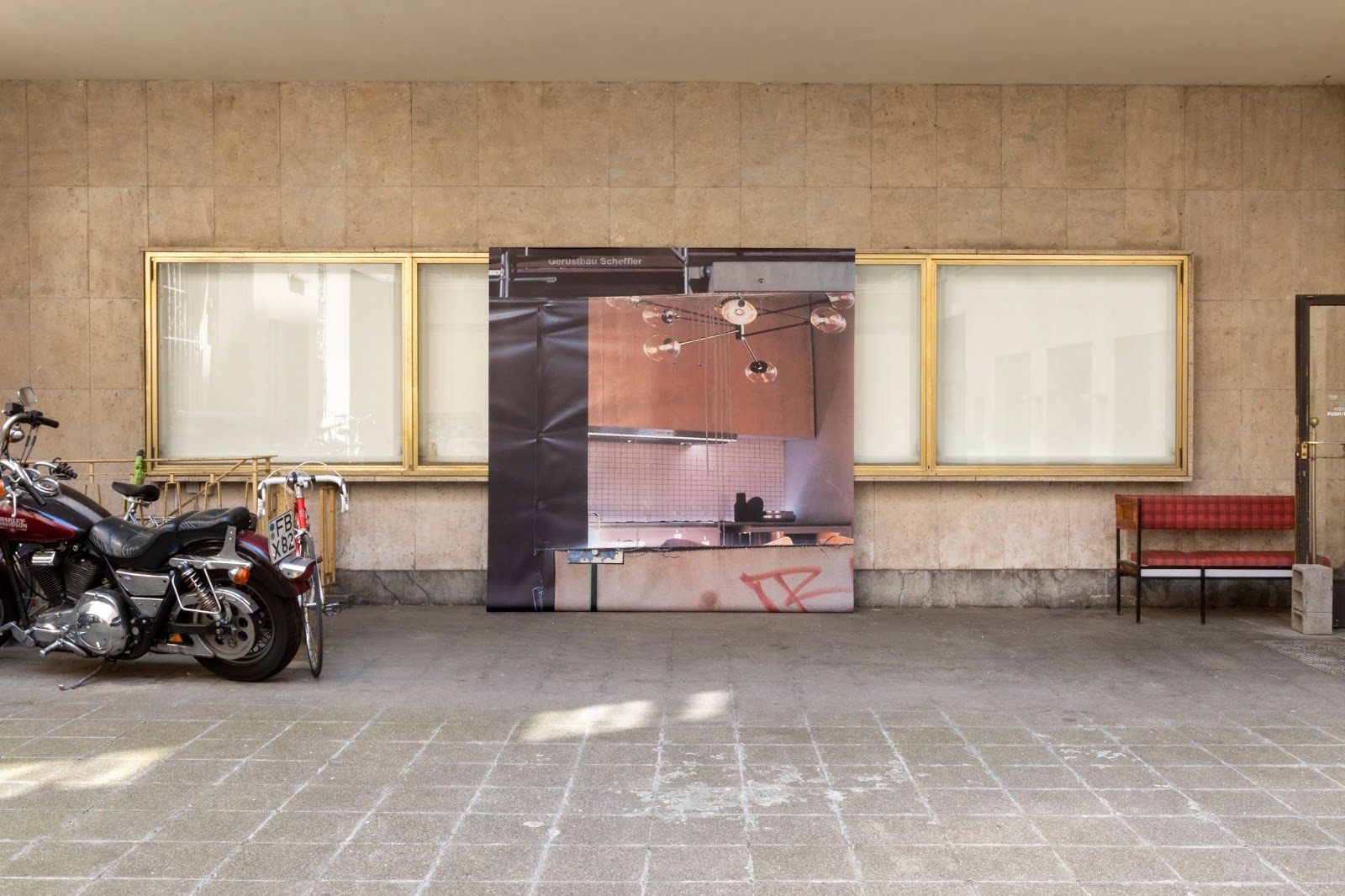 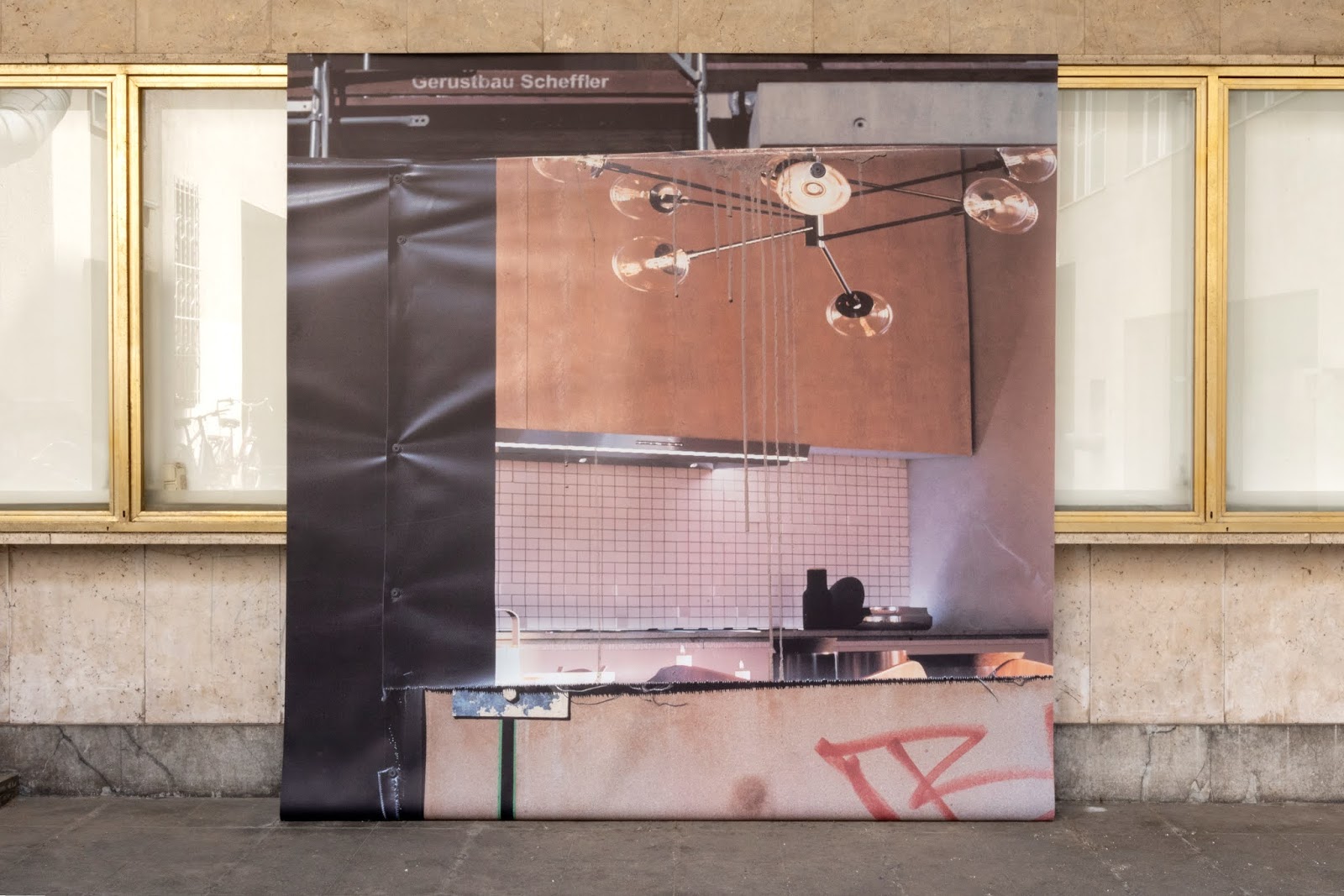 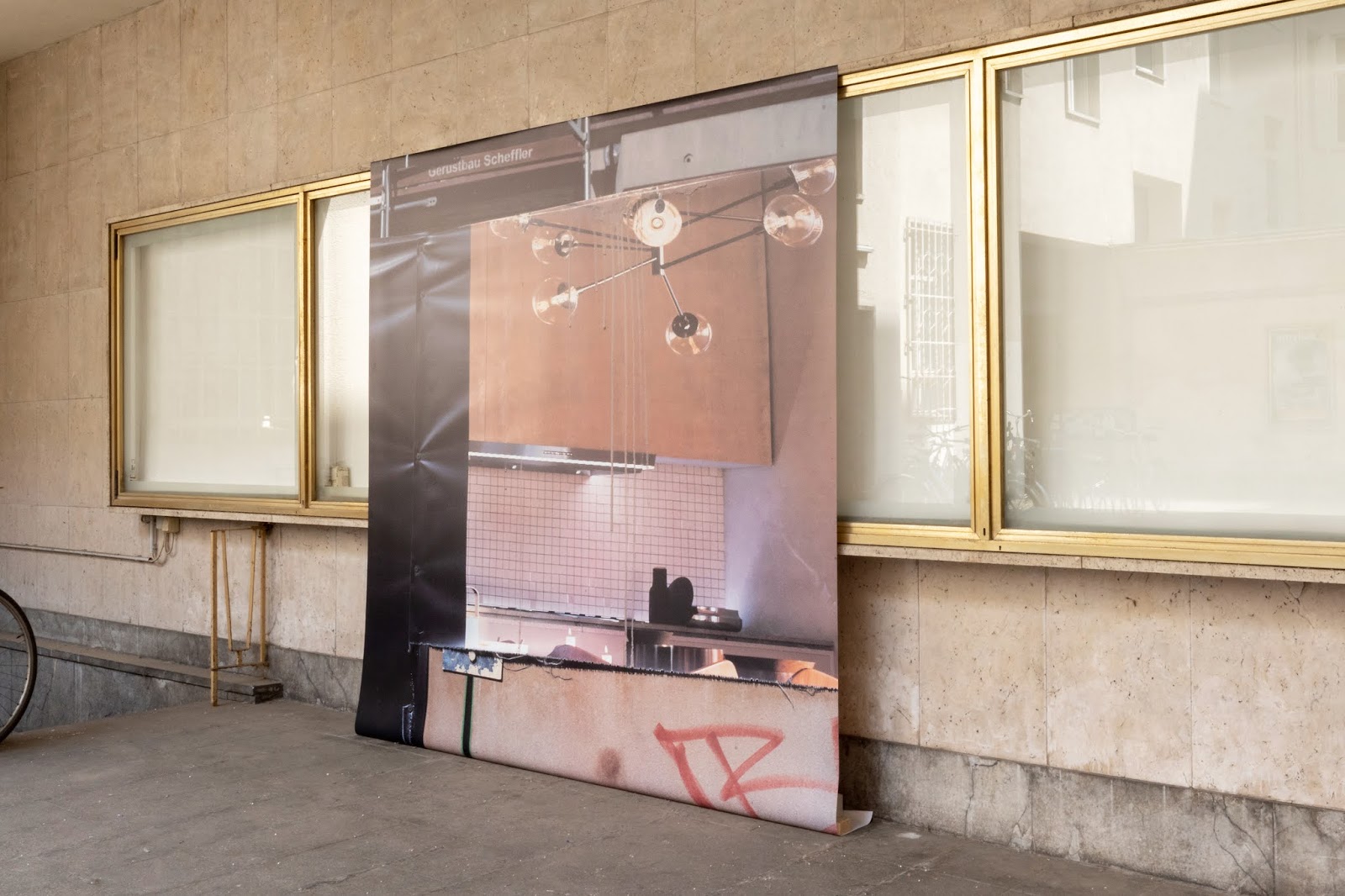 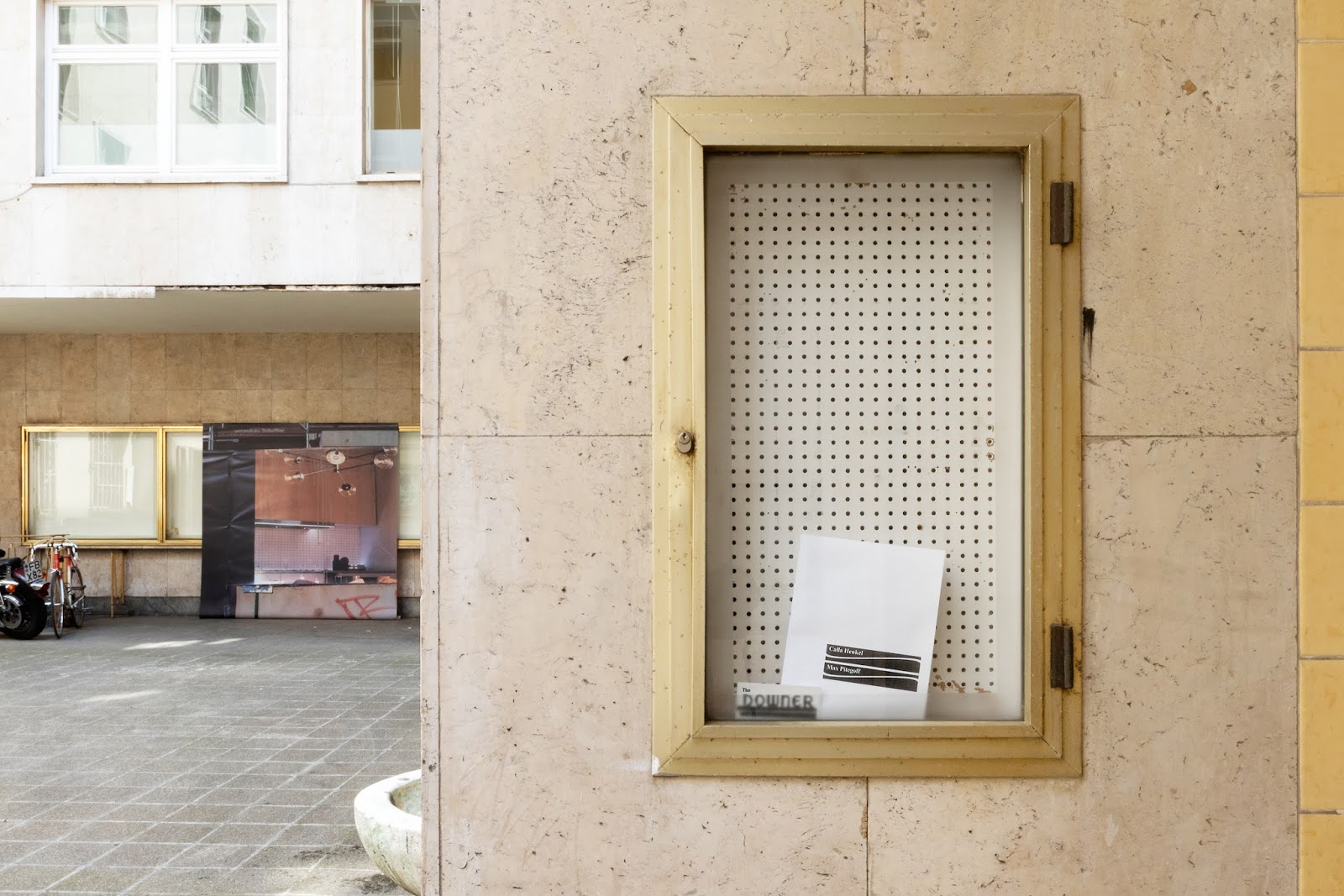 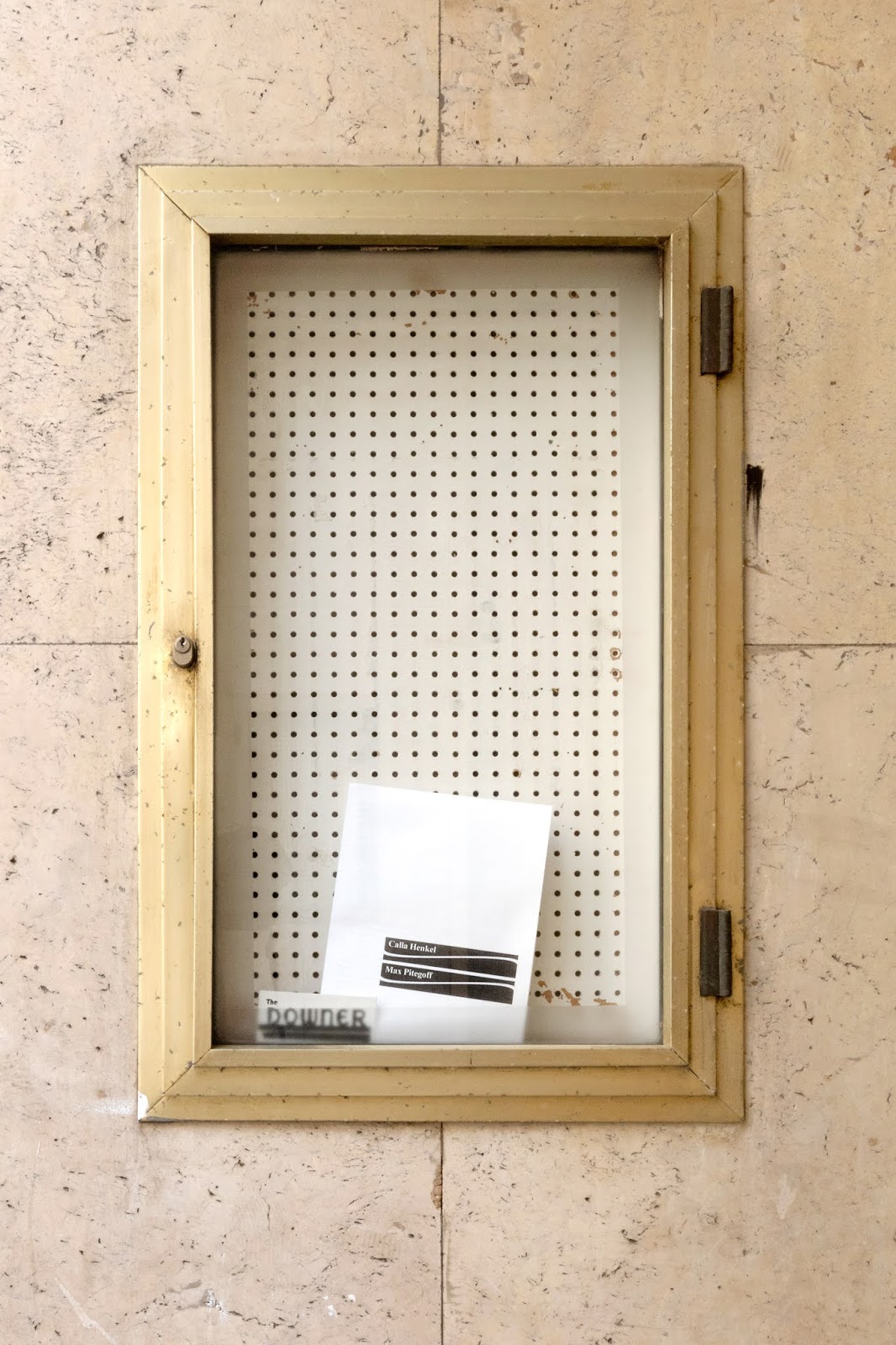 Calla Henkel and Max Pitegoff at the Downer

All images courtesy of the artists and the Downer.

I’ve known Calla and Max for a decade now. I’ve seen the spaces that their work endeavored to create. I have happily (occasionally begrudgingly) been a part of some of their exhibitions and projects during the course of this time. I once read from receipts pictured in a series of photographs after having installed them in front of a live audience; I performed in a play they wrote and directed about an in-fighting but enterprising band of squatters who run a ramen restaurant out of an apartment they share; I helped assemble banquettes in their theater, hung and painted backdrops, operated the video camera, mopped floors, and built architectural models. I’ve sold their work to collectors and donated my own paintings to their benefit auctions. Our lives are closely connected and likely will be for their remainder. This show has nothing to do with our shared history, so I will refrain from dredging up too much more of it after this paragraph. But unlike any other thus far, this show is charged with a particular energy for me. Calla and Max had a big influence on the circumstances that brought me to Berlin, Also, it was through their initiative that the Downer began.

In my eyes, the core of Calla and Max’s work is the idea of community and shared experience. It examines the ways in which these ideas can be deployed against authority or serve to reinforce it. For as long as I’ve known them, and longer, their work has brought people together. Using friends as models, actors, performers and collaborators, they have created and fostered communities. As the complexities and personalities of those communities bristled against one another, they have likewise served as mediators, confidants and — conversely — the objects of disparagement. They have founded and operated bars, venues and theaters, with each space comprising some ratio of these component parts. Their first was a ‘bar’ in their shared studio at Cooper Union — which was more of a sculpture that encouraged people to get together and have a beer. Then followed Times Bar in Berlin, founded in collaboration with Lindsay Lawson, New Theater and TV Bar, which just reopened after a few months of Covid-19 provoked shutdown (and which you should go visit).  Calla and Max’s practice is, on one hand, institutional critique and, on the other, embodiment of the institution.

The series of photos that I installed and read from in 2013 pictures artists sorting through their receipts, presumably in preparation to submit them to the tax office. The photographs don’t picture the artists themselves, just out of focus glimpses of them in front of or behind receipts piled on kitchen and cafe tables. Each piece was given the instructive title of the artist’s first name, the city (always Berlin) and a period of time (i.e Spring 2013). In a simple gesture the gut-leadening feeling of dealing with anything related to taxes is communicated. For artists and artworkers in particular, who exist in an industry where passion for art is often exploited to extract unpaid labor, the quarterly conundrum of what is and isn’t a warranted write off is evoked. Was that book for enjoyment or research? Was that dinner business or pleasure? Should I have been paid for this or was I volunteering? Where do fun and labor coincide and how can they be properly distinguished when friendships blur into professional relationships? This anxiety isn’t really related to taxes — that question is quickly answered with, “write off as much as you can get away with” — but these photos indicate a deeper existential uneasiness about the ways in which we are evaluated. Moreover, they say something about the ways in which we evaluate our own lives and work, and the relationships that often straddle the blurry boundary between them.

My definition of a scene would be: a recognizable movement in which the participants' activities — as artists, performers, personalities, whatever, really — draw them into the same chapter of collective imagination, compounding the significance and reach of their ideas. Scenes have driven the advancement of art for a few hundred years and have been allowed to more or less write their own histories. The overlapping scenes that Calla and Max have cultivated over the past decade provided fodder for their own artistic work, as well as giving inspiration and a platform to their myriad members. Relationships extend beyond Berlin and the physical spaces they have helmed, situating Calla and Max’s work within a growing, networked alliance of artists — many of them also involved in organizing project spaces or artist run galleries.

I’ve met lots of people through Calla and Max and I imagine a lot of people reading this feel the same way. Sometimes being introduced felt uncanny, as if the scene was manifesting its connections after it had already made them algorithmically. Other times I’ve been surprised to meet someone at New Theater or TV Bar who was so unknown to me that my first conversations with them felt revelatory, despite the fact that, superficially, our lives bore so much similarity.

The way that people get to know one another and end up influencing each other is something that has been parodied in Calla and Max’s plays. Many of them open on a group that has ended up together more or less by chance. “Farming in Europe'' featured a cadre of restaurant workers — a textbook example of multifaceted, diversely motivated collaboration. A gang of dejected vacationers populated “News, Crime, Sports,” a play that was set on an unmoored and un-captained cruise ship. The ragtag band of squatters who sell ramen out of their home in “Apartment” seemed to have fallen in with one another out of sheer necessity. In these arenas, characters quibble over ideological differences and willingness to contribute to a collective cause. They ridicule each other for their shortcomings, pontificate about the meaning of life and agonize over how to solve their problems. They also kind of take care of one another. Their haphazard convergence nearly always ends in haphazard goodbyes, but they usually manage to have a revelation or two along the way.

A scene, of course, is also an element of theater. The artists that have coalesced around Calla and Max’s organizing efforts feed one scene that cannibalizes itself for inspiration in others. The characters in their plays are — like all works of fiction — mash-ups of real personalities. Some ended up playing versions of themselves. Others didn’t have to look far for someone to imitate — they were probably sitting in the first three rows. Casts of mostly untrained actors, who were performing mostly for their friends, took scripts into their own hands, whether intentionally or not, returning them to the collective through misremembered lines, unscripted giggles and embellishments that kept the balance of who’s-using-who in a kind of limbo. This cultivated antiprofessionalism has become a hallmark of Calla and Max’s projects, giving them both a liveliness and an easily accessed escape hatch. If you don’t take something too seriously no great disappointment can come from it.

I would venture that we exist in a moment that is anxiously and unrecoverably disconnected from earlier utopian artistic scenes. One of the reasons is that everything is so connected already. There are increasingly fewer insights and ideas to share offline as the internet swallows and aggregates, and we increasingly substitute our collective consumption for shared experience. Does a group of people who have seen the same meme constitute a scene — not really, right? Interestingly, Calla and Max almost never use the events at their spaces as documentary subjects. Occasionally they will exhibit used, purpose-built furniture or show photos that picture dirty tabletops or half full glasses. But it’s hard to track down images of their friends socializing or even of their plays being performed. When they do ask friends and collaborators to pose, it’s almost always in a quasi-fictional role — in costume, or at least with ample stage direction. Beyond headshots, this same feeling is conveyed in their series of photographs of friends’ apartments made-up for AirBnB. These depict idealistically polished, yet inherently blemished living spaces that are uncomfortably braced for evaluation. Real spaces fictionalized for someone else to imagine themselves in. Documenting something or someone being candidly themselves is resolutely, almost inherently, barred from Calla and Max’s vocabulary. As if to acknowledge that we live in the moment of the curated feed, where everything is staged and everybody is acting as their own director, giving stage direction to the leading character of their own auto-drama.

When not focusing on fictions, their photographs often focus on the liminal — the absent or the accumulation that starts to make itself heard from the wings. The ostensible subjects of their photos are usually only tangentially related to a larger subject, like a newspaper, an empty cocktail glass or a receipt. In a large series of photographs of apartment viewings from different cities, the subjects were the desolate interior landscapes that serve as a backdrop for hopeful projection. Shot in black and white and printed in a darkroom — decidedly the opposite method of image making employed by the real estate industry — these photos occasionally feature glimpses of other visitors to the viewings. Mostly they feature the product of an emptying out, volume exchanged for capital. In a funny way, they are almost antithetical to the AirBnB stagings — one attempts to conjure domesticity with no props, and the other attempts to hide the props to allow potential guests to conjure domesticity in someone else's home. Neither strategy is as helpful as you would hope.

A third, more recent series of photographs that also relate to living spaces pictures vignettes of the residence of the US Ambassador to Germany, which is a private home that changes occupancy with each diplomatic appointment. The photos were lit using theater lights from New Theater, giving the scenes an amber melodrama that heightens the antiquated domestic setting, questioning the relevance of the pomp of this classic American excess. At the same time, diplomacy gestures towards a version of interpersonal interaction that yields more than just a social life. Are the machinations, backstabbing, and insider trading of the artworld all that different?

Having sought places to stage performances, serve drinks or host conversations for over a decade, it’s no surprise that Calla and Max’s work also obsesses over real estate. What good is an eager audience without a space to host them? And as art and performance have increasingly dematerialized themselves to fit onto laptop and iPhone screens, Calla and Max have doubled down on their belief in physical space as paramount in provoking thought and fostering friendships. The question of art’s influence on real estate has been scrutinized by artists for 50 years or more, but this link is calcifying as art is more and more frequently deployed in an effort to gentrify. Artists face the paradoxical sociopolitical inner-turmoil of occupying both sides: they are often economically and ideologically linked to those who face displacement and, conversely, dependent on and symbolically linked to those profiting from the displacing. A big, and seemingly growing share of art collectors are making fortunes in real estate. As an artist, striving for patronage and solidarity presents contradictions without easy resolutions. In a sense, this horrible dilemma could be seen as another, deeper motivating factor in Calla and Max’s practice — to create a space that masquerades as something more functional than it actually is. A ragtag gang of artists play-acting the operations of a legitimate business. Theirs is an institution that aims to welcome as many as possible and preside over none of them. Art should aim to do the same.
Patrick Armstrong
Tags Berlin, Calla Henkel, Lazy exhibitions, Max Pitegoff, Patrick Armstrong
Newer Post Older Post Home