A Law of Slipping Off 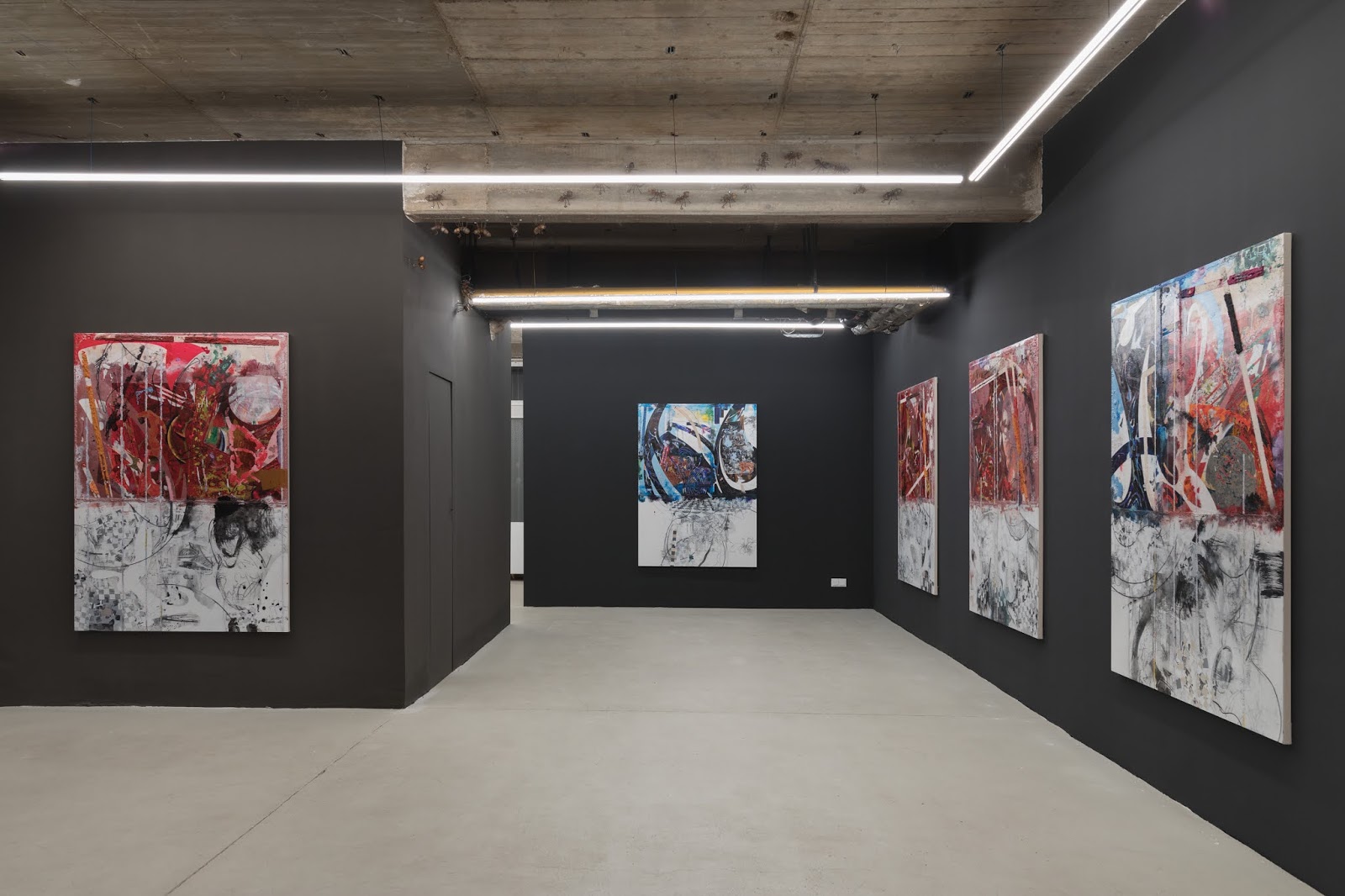 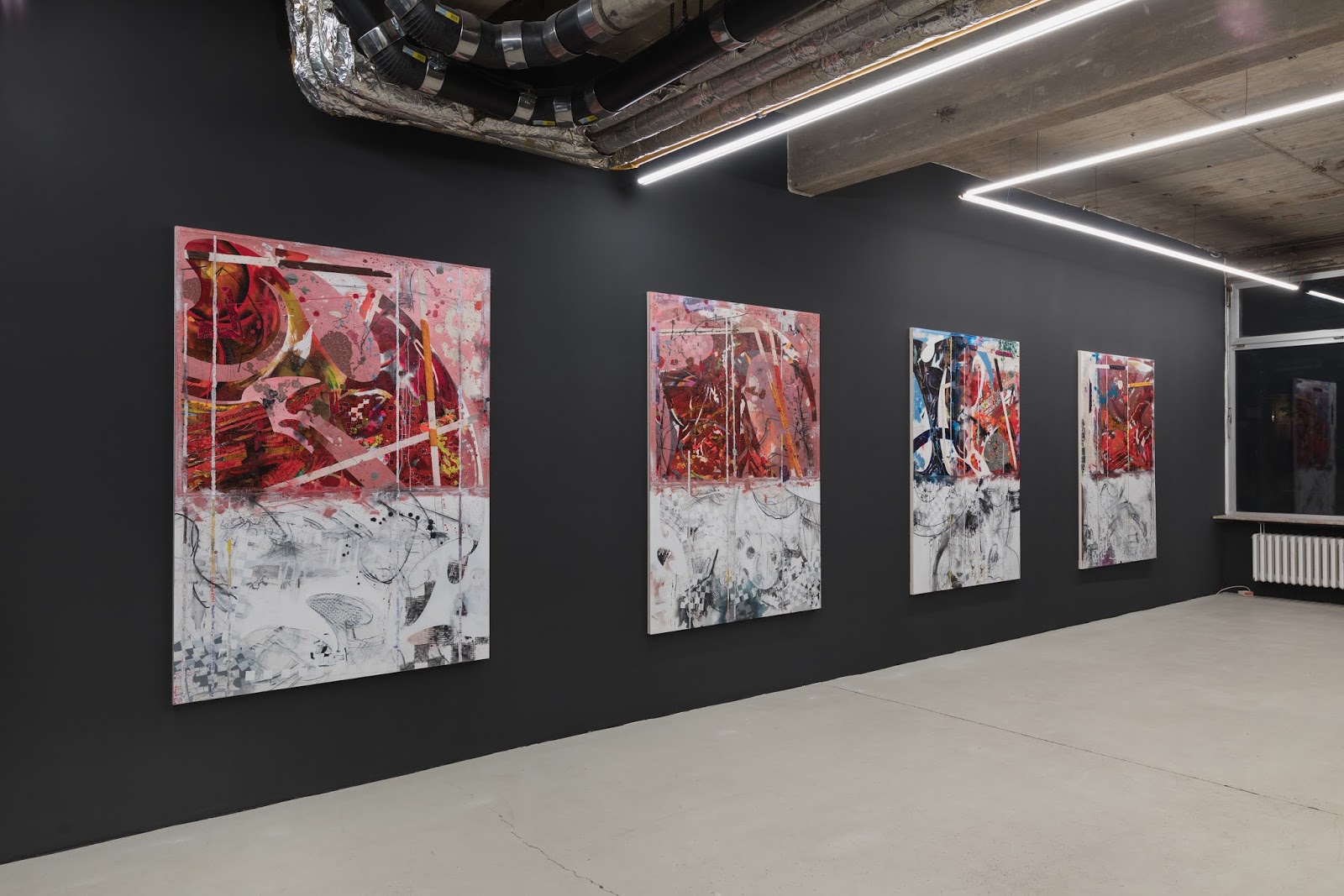 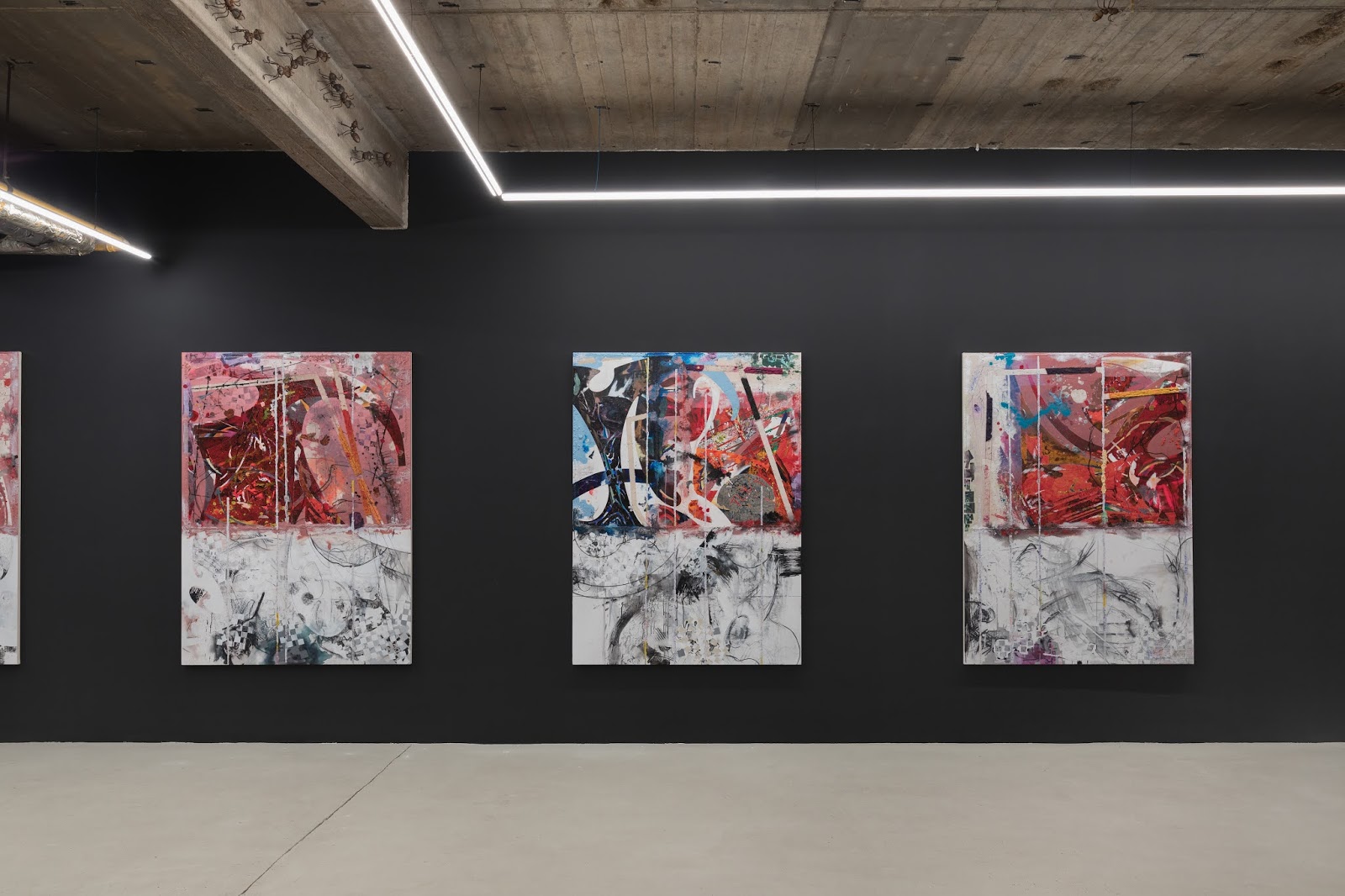 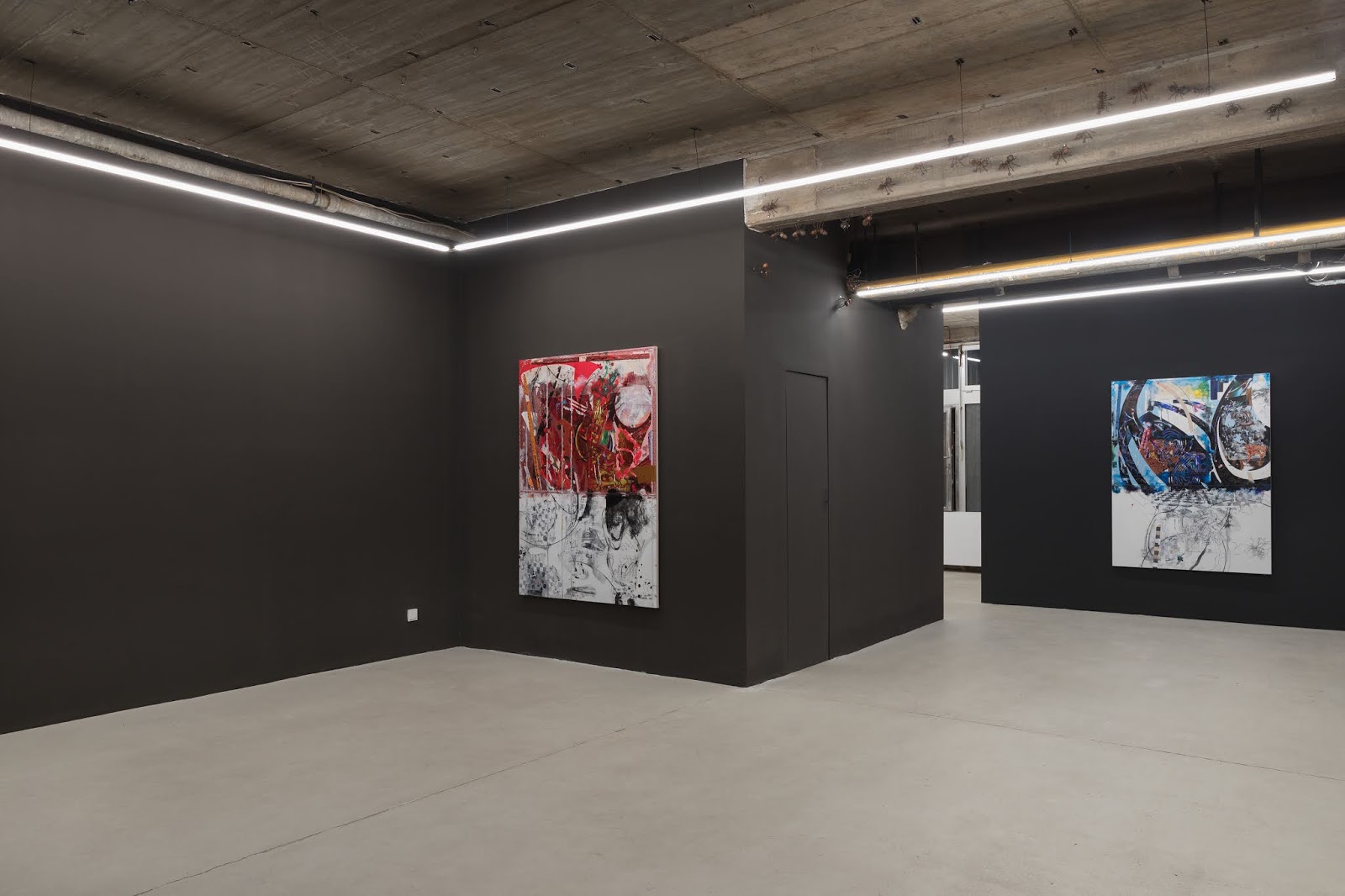 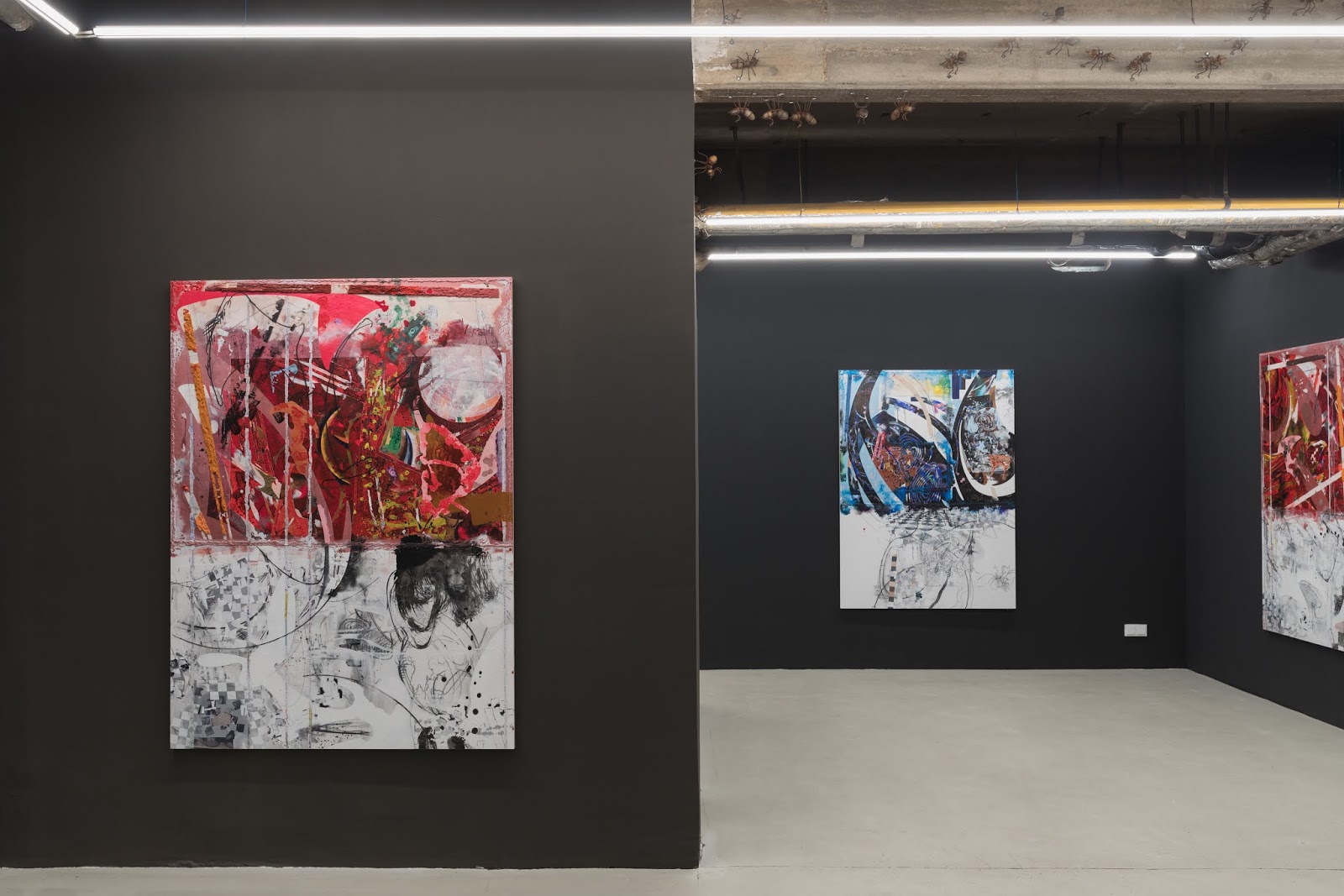 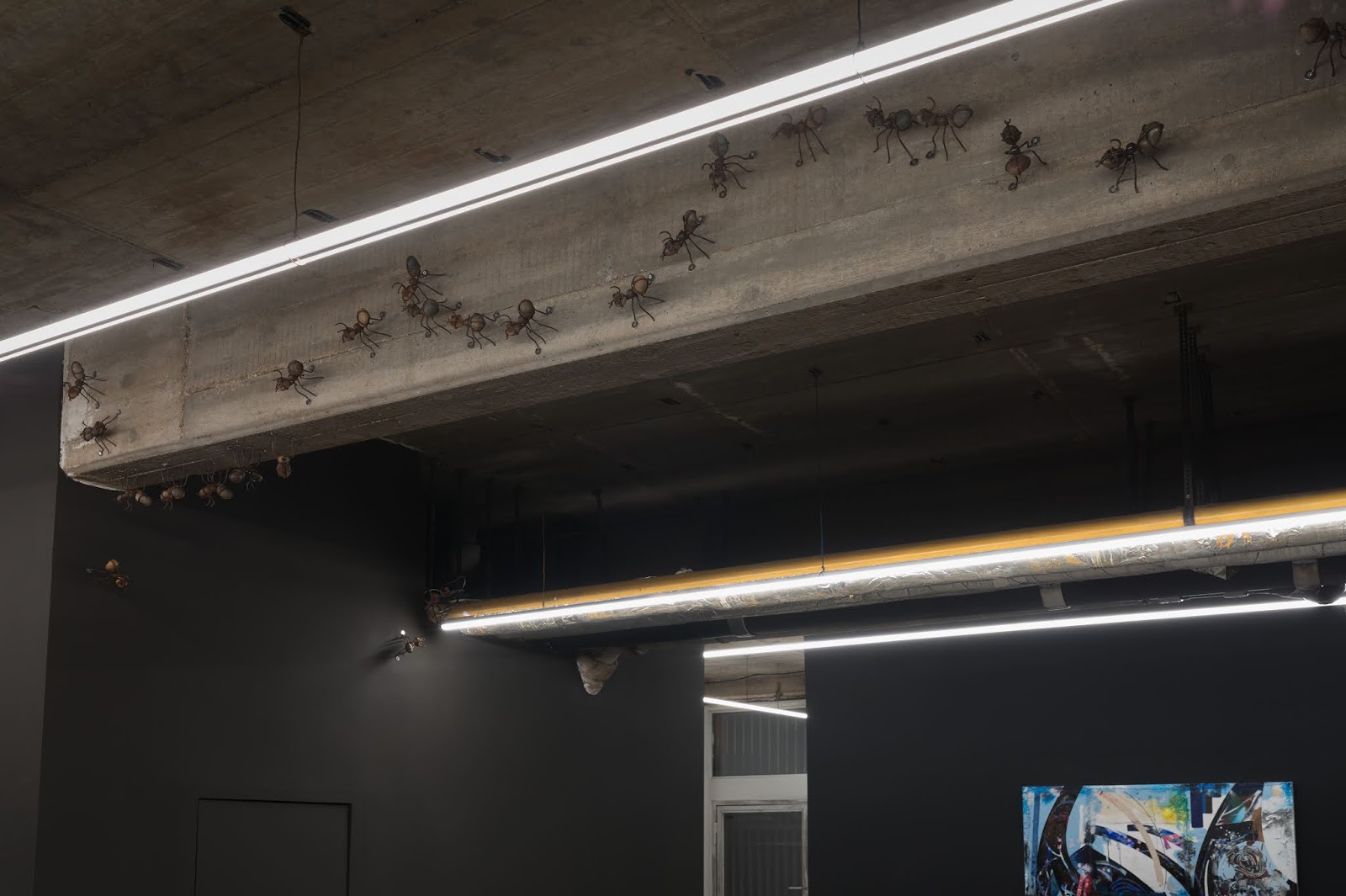 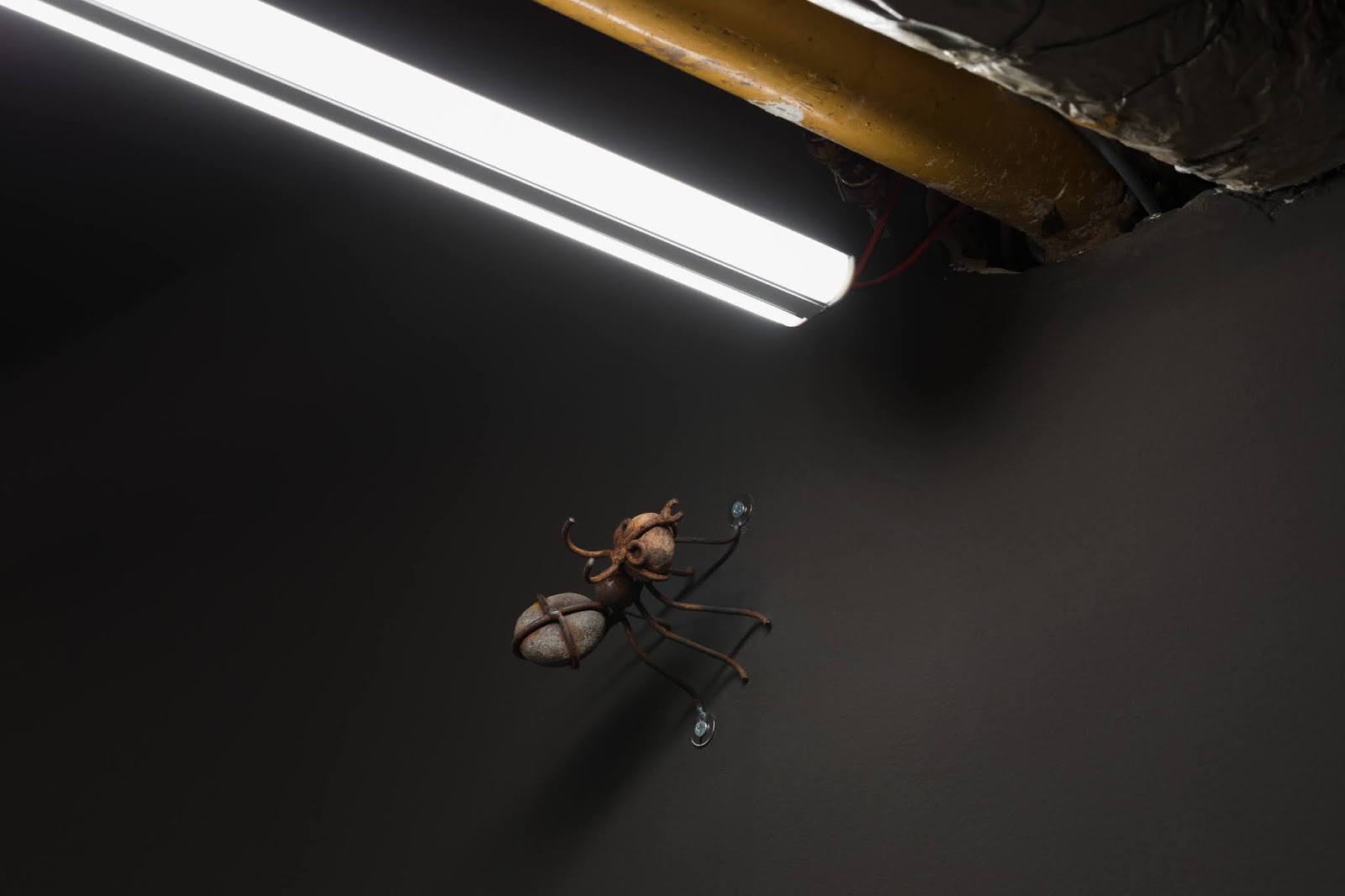 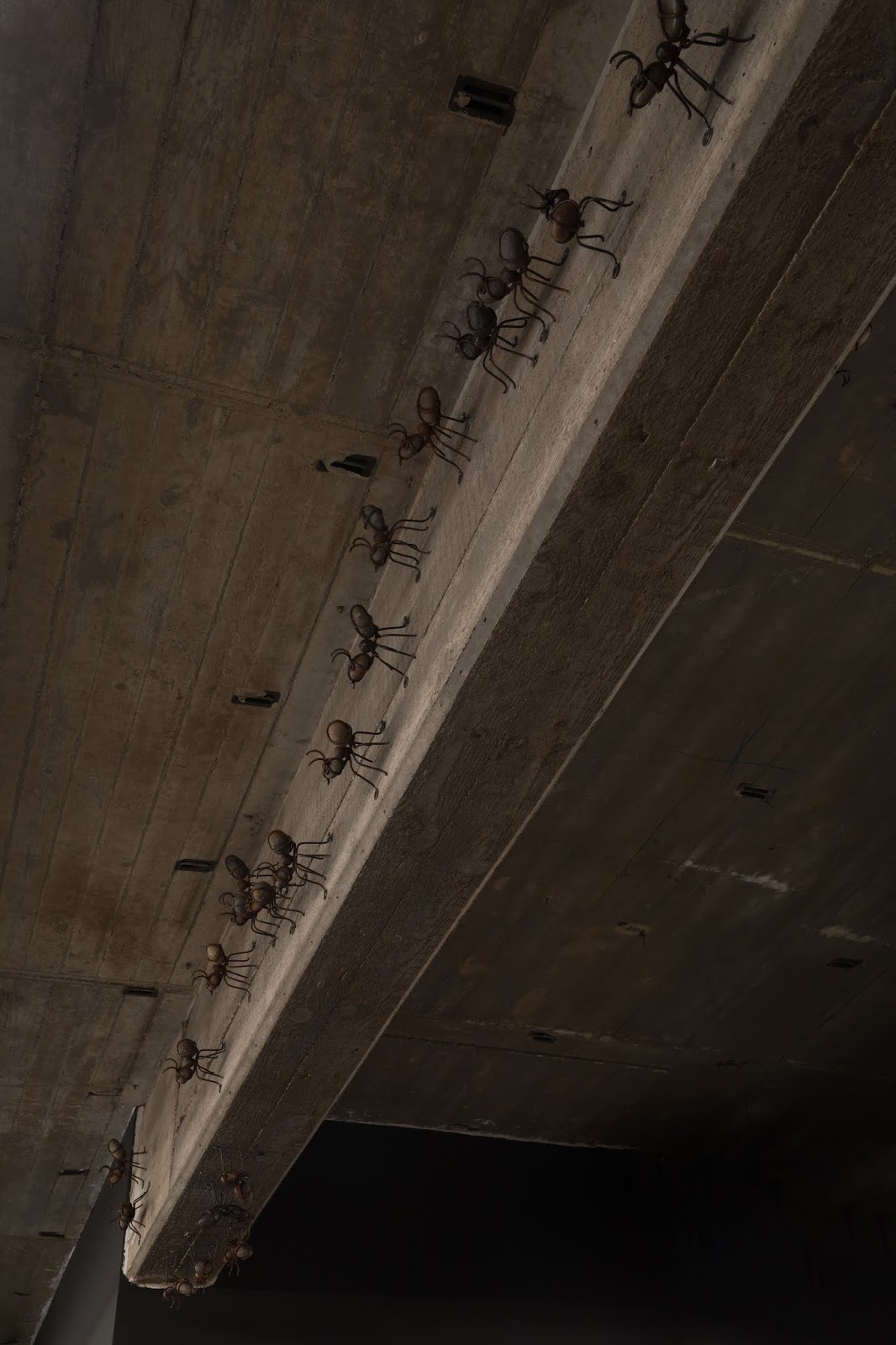 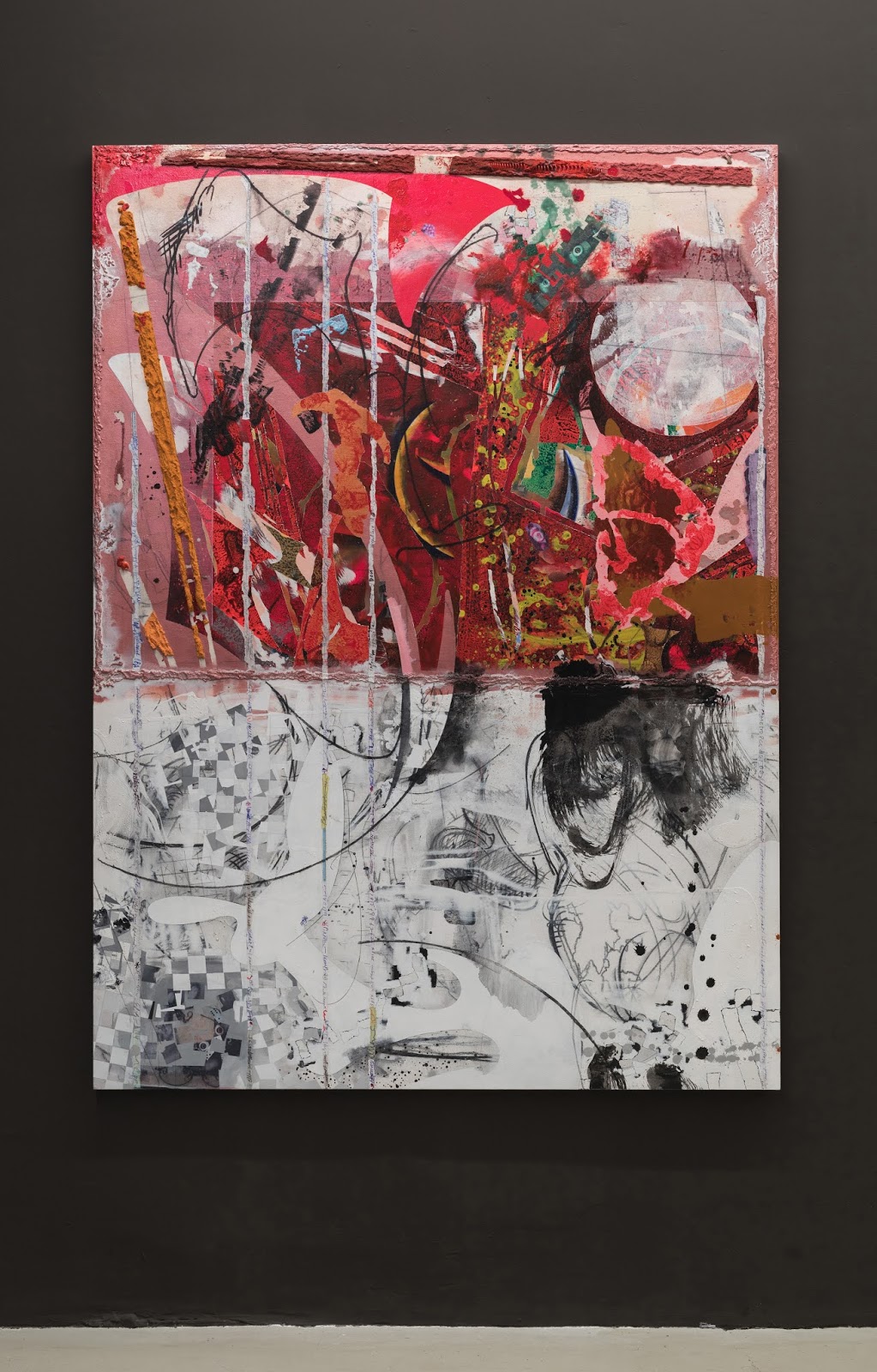 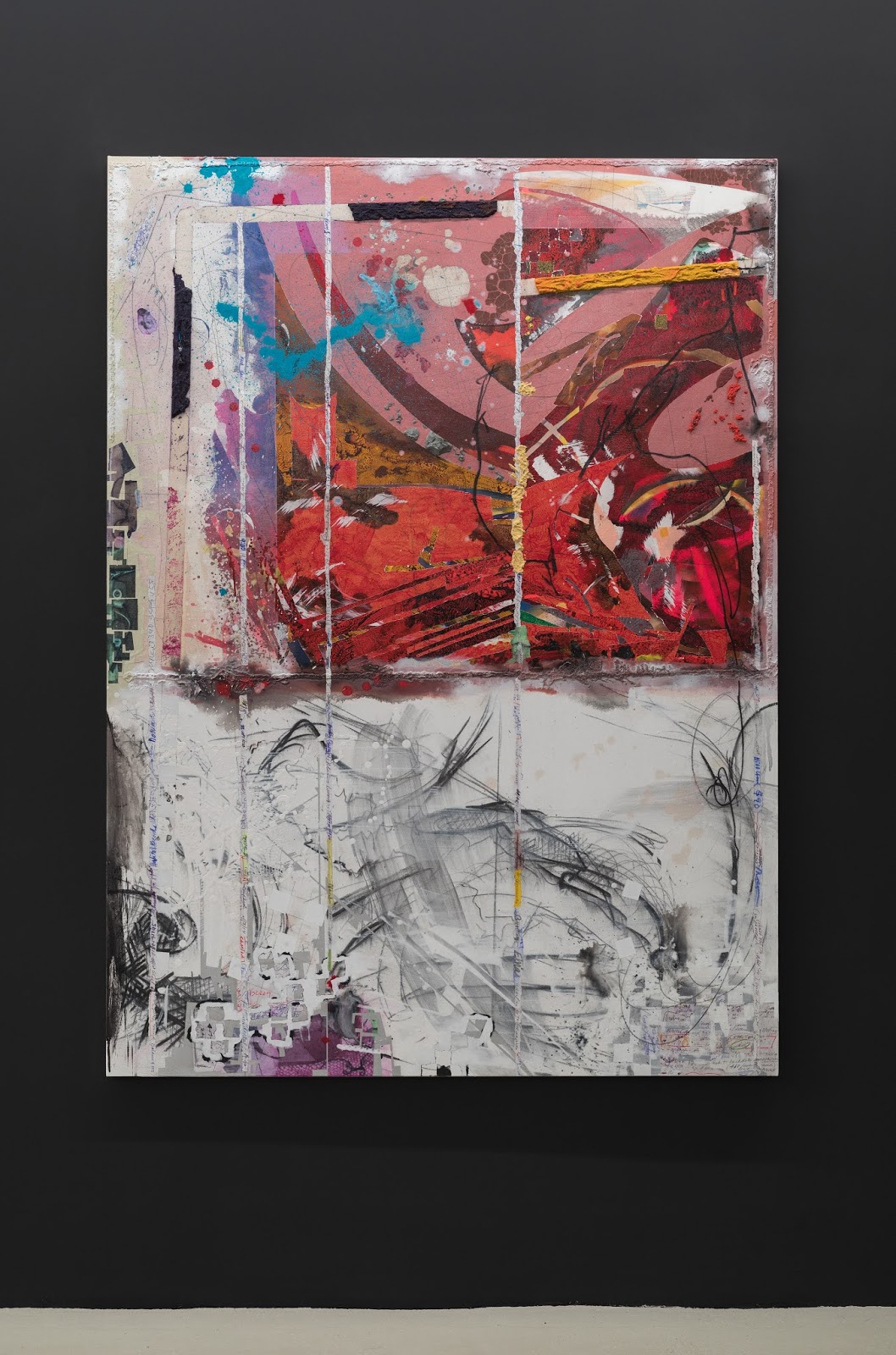 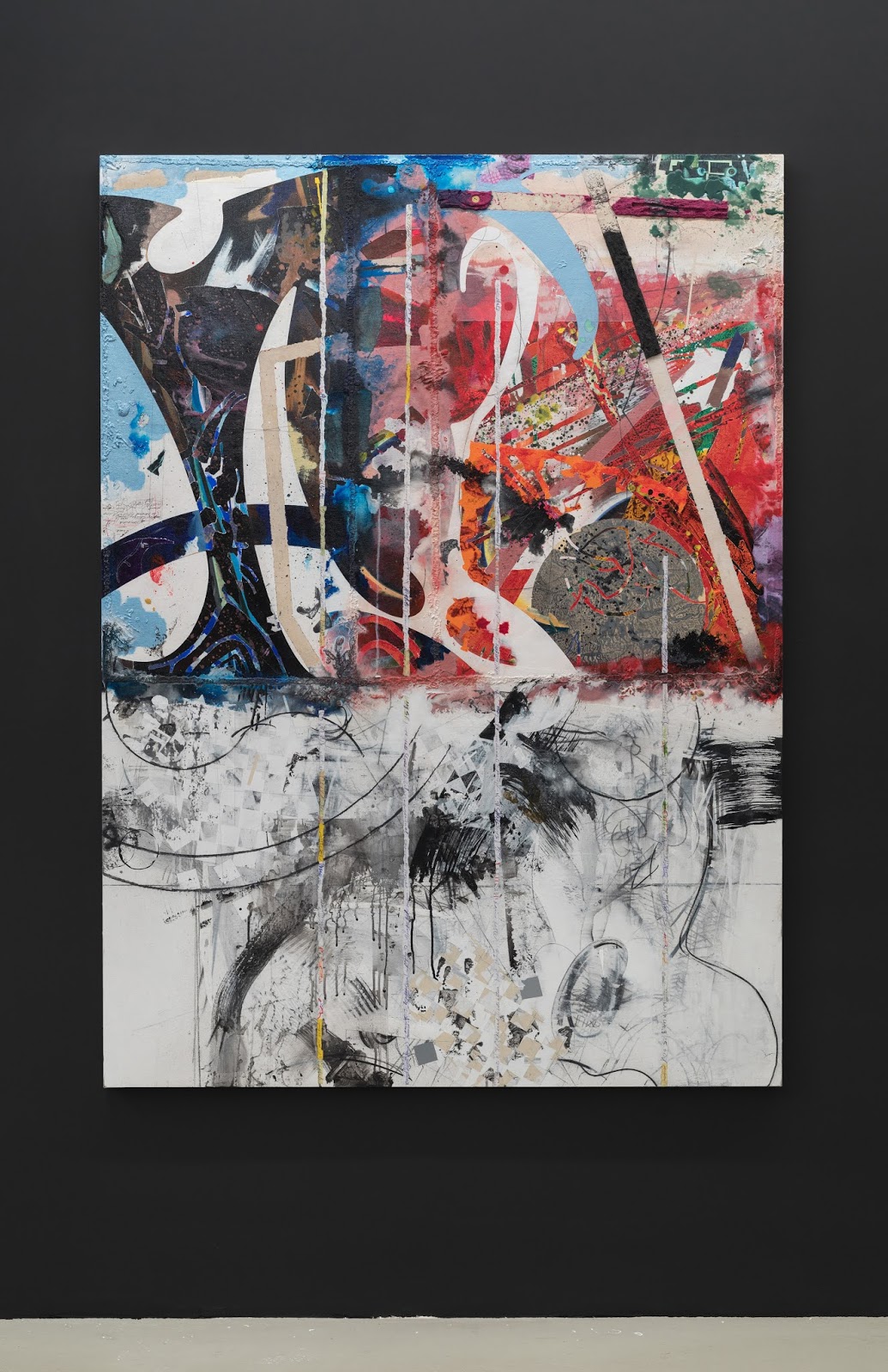 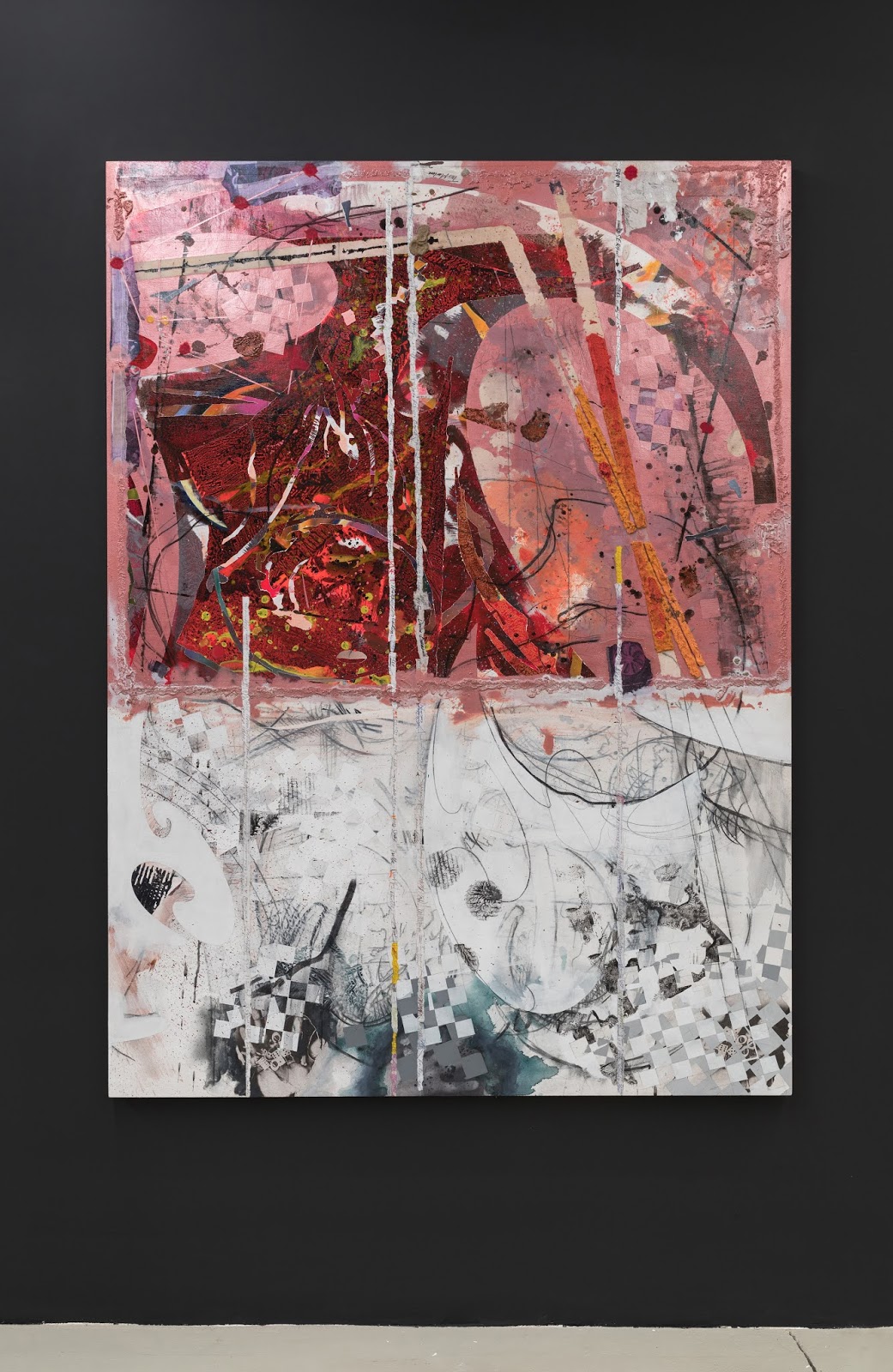 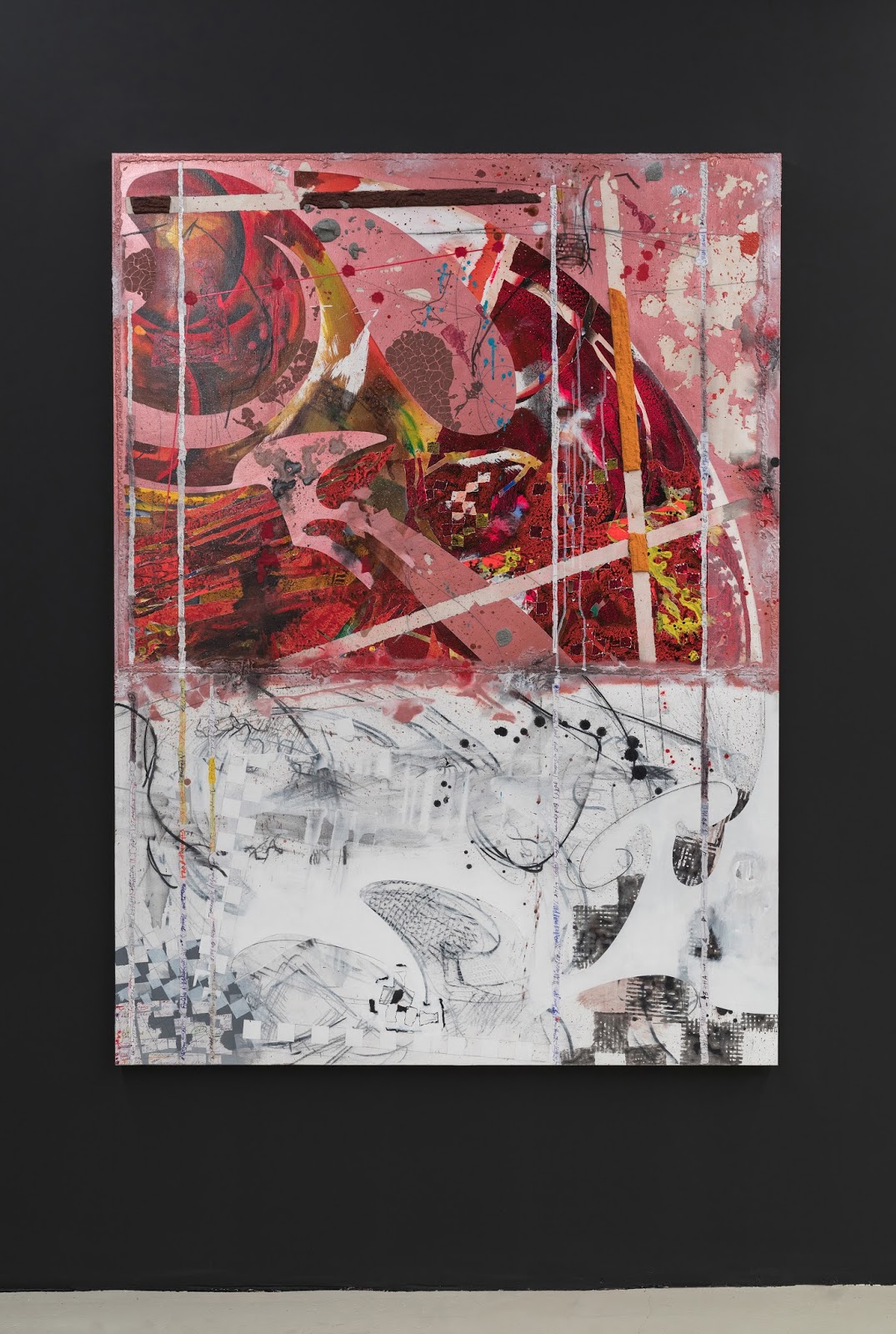 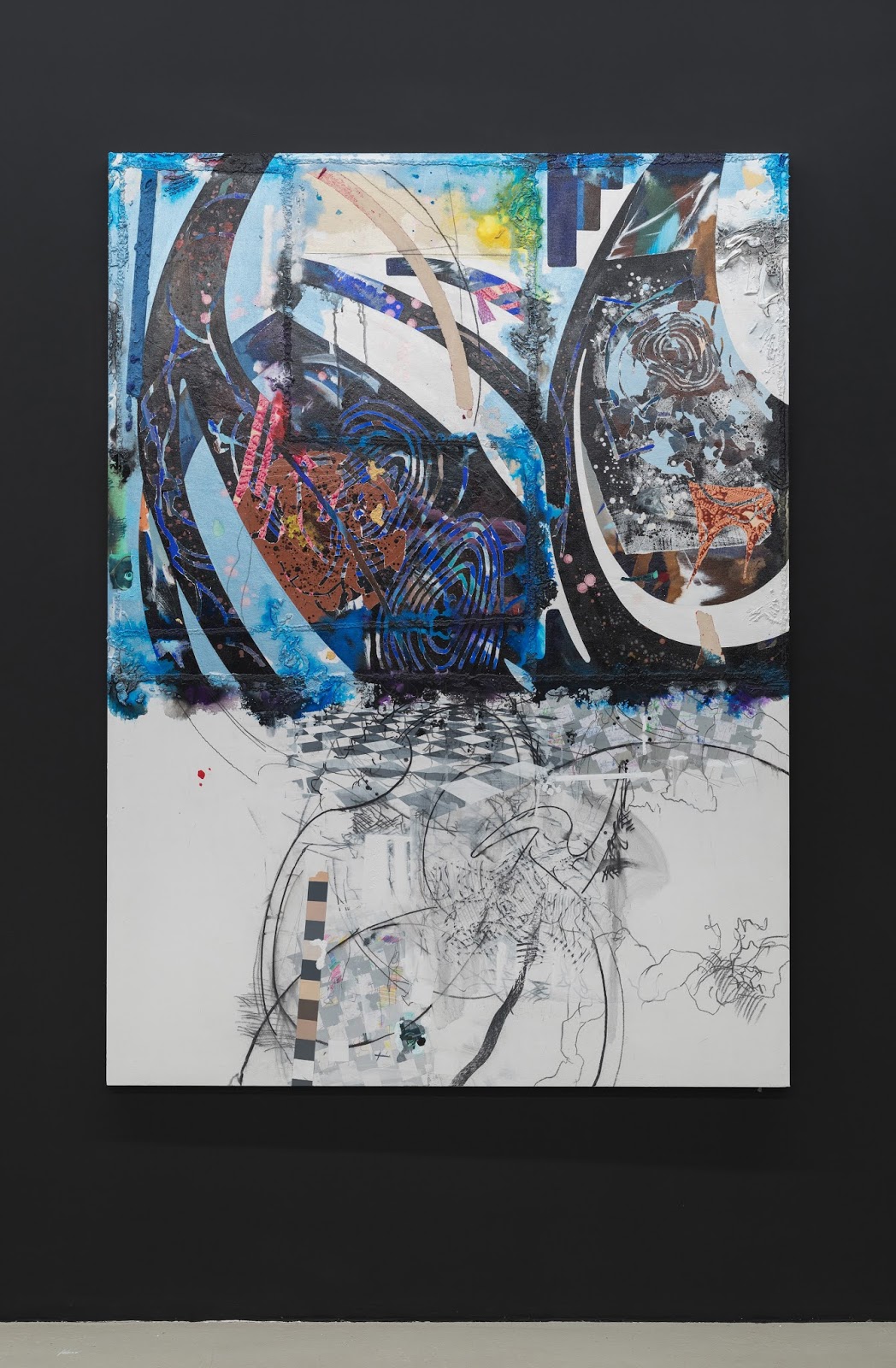 Cuban artist Victor Payares is presenting a new series of works at Goeben, Berlin. A Law Slipping Off features six large polyphonic paintings that exemplify the artist’s rhizomatic approach. Painting, sculpture, craft, design, architecture, and archeology have converged into a unified style in Payares’s latest series. A highly abstract cartographic process, which evokes an image of the cosmos as much as micromolecules, anthills as much as aqueducts, repeats in each canvass but the paintings never become mechanical or scientific and always maintain an element of the unexpected.

In this series, Payares develops a complex layering process and utilizes paint in such diverse ways that it creates the effect of different materials. As a whole, we are confronted with a polyphonic picture: the surface is knit together by heterogeneous elements that repeat themselves with marked variations. However, a focal point of each of these highly-complex paintings is a dividing line just below the midpoint of the canvass; it sets the starting point from which the play of dualities and oppositions spiral outward onto the whole picture plane. The realm inhabiting the space below this line contains black, grey, and white sketch-like elements that act as an essential foundation, origin, or root to the intricate layers of vibrant red and pink hues that dominate the top of the picture plane of A Day (2020), for example. Although it brings to mind a horizon, the dividing line is the edge from which top and bottom mirror each other; but if the eye follows the lines as they cross this border, it might even represent the submerging of the top of the picture plane into a black and white underworld/interior/core. And here lies the first of many uncertainties in the series: it is equally possible that the colorful and richly textured top side is emerging out of the bottom. This potential movement challenges our sense of underground and overground on the picture plane, which resonates with Payares’s interest in archeology and sedimentation, while it also undermines traditional painting’s distinctions such as flatness and depth, foreground and background.

Similarly, in The Mosquito Coast (2020) we might wonder what side of the canvass is the coastal water and which is the land. Like all paintings in the series, every other element in the composition beyond the dividing line has equal importance; with this strategy, Payares undermines hierarchical distinctions without blurring the different elements. The surface of each painting thus presents itself as a site of divisible forms and textures that explore and subvert explicit oppositions without succumbing to ambiguity. The earth and the sky, organic and geometric, transparency and density, subtraction and addition, are just a few of the elements that become interwoven without dissolving their distinction. The series of paintings also transitions from red hues to blue hues, whereby we also might begin to sense a transition from dusk to dawn, or day to night.

For the first time in his work, Payares has integrated handwritten texts and drawings made by his mother, a practicing psychologist, which he has collected over several years. This palimpsest, which serves as ode and collaboration with his mother, adds a formal and conceptual layer to the already elaborate paintings. Positioned along vertical lines they also ground the labyrinthian universe they inhabit. The stripes of ripped paper bring words and thoughts, names and incomprehensible scribbles into the experience of the whole, they provide order or architecture to the elements of formlessness that accompany them. Meanwhile, an army of ants made out of steel rods and river pebbles crawl on the ceiling of the exhibition space. These participANTs (2018-ongoing) reinforce the experience of being underground while upending our sense of gravitational orientation, adding a touch of humor and lightness to an otherwise unsettling situation.