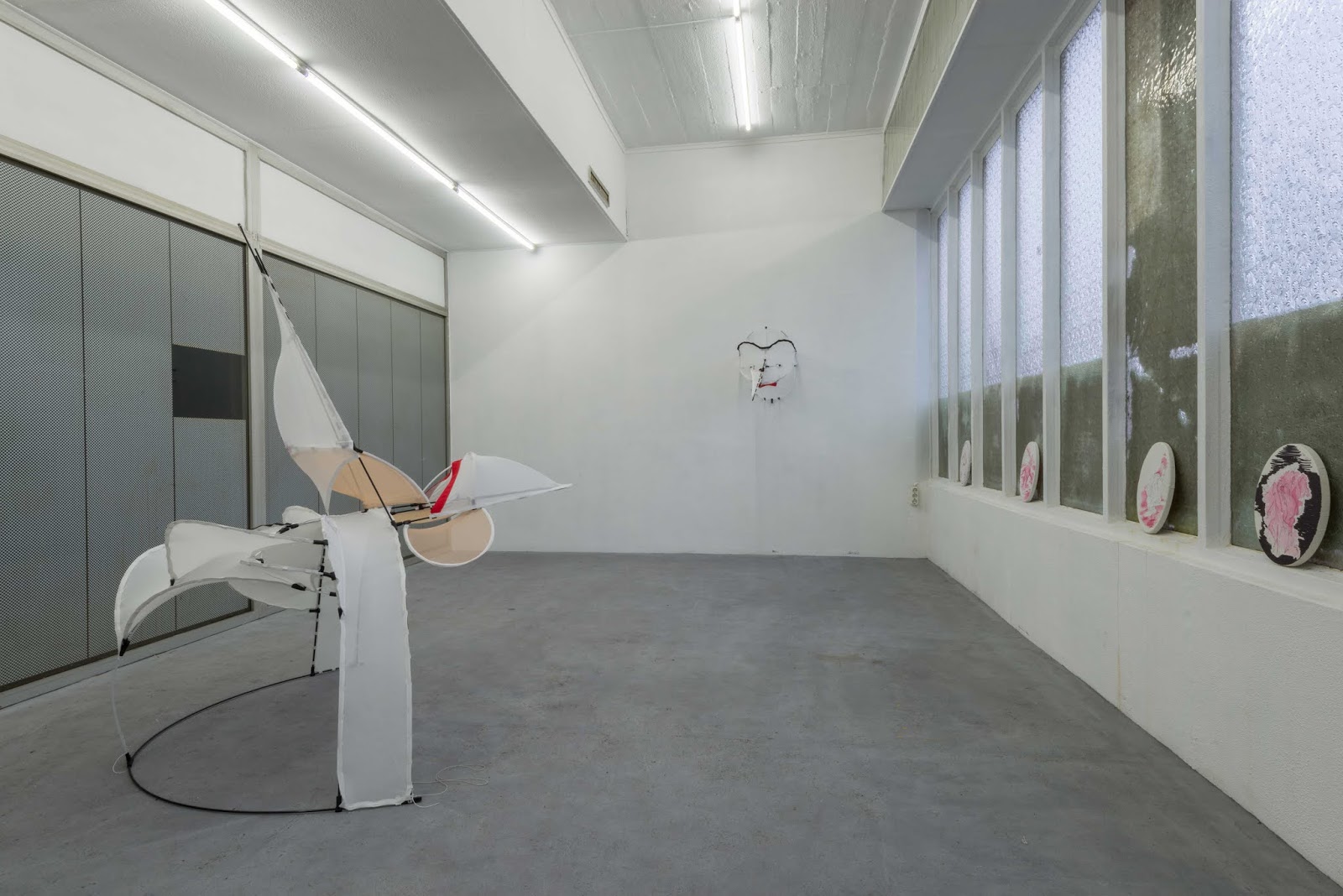 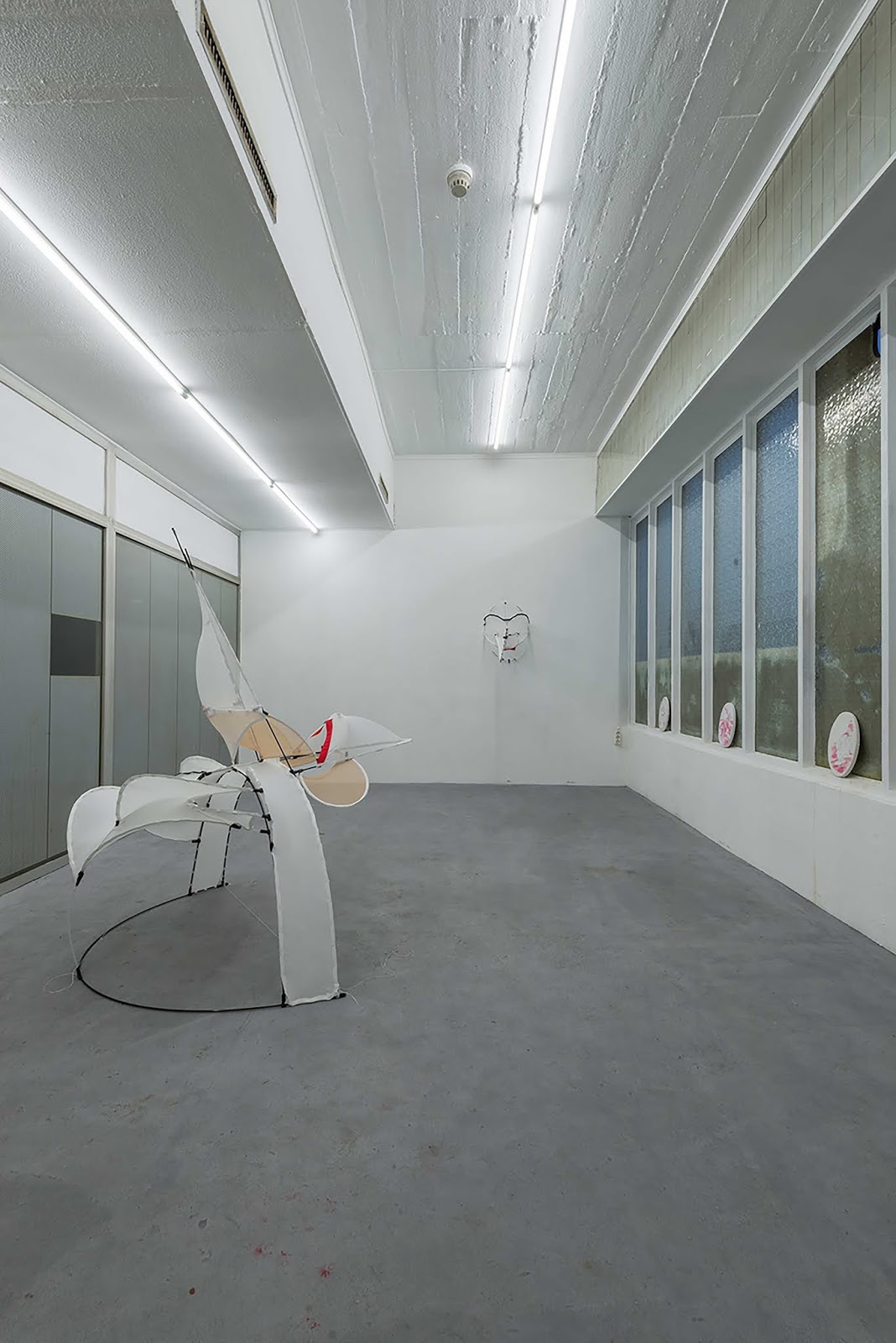 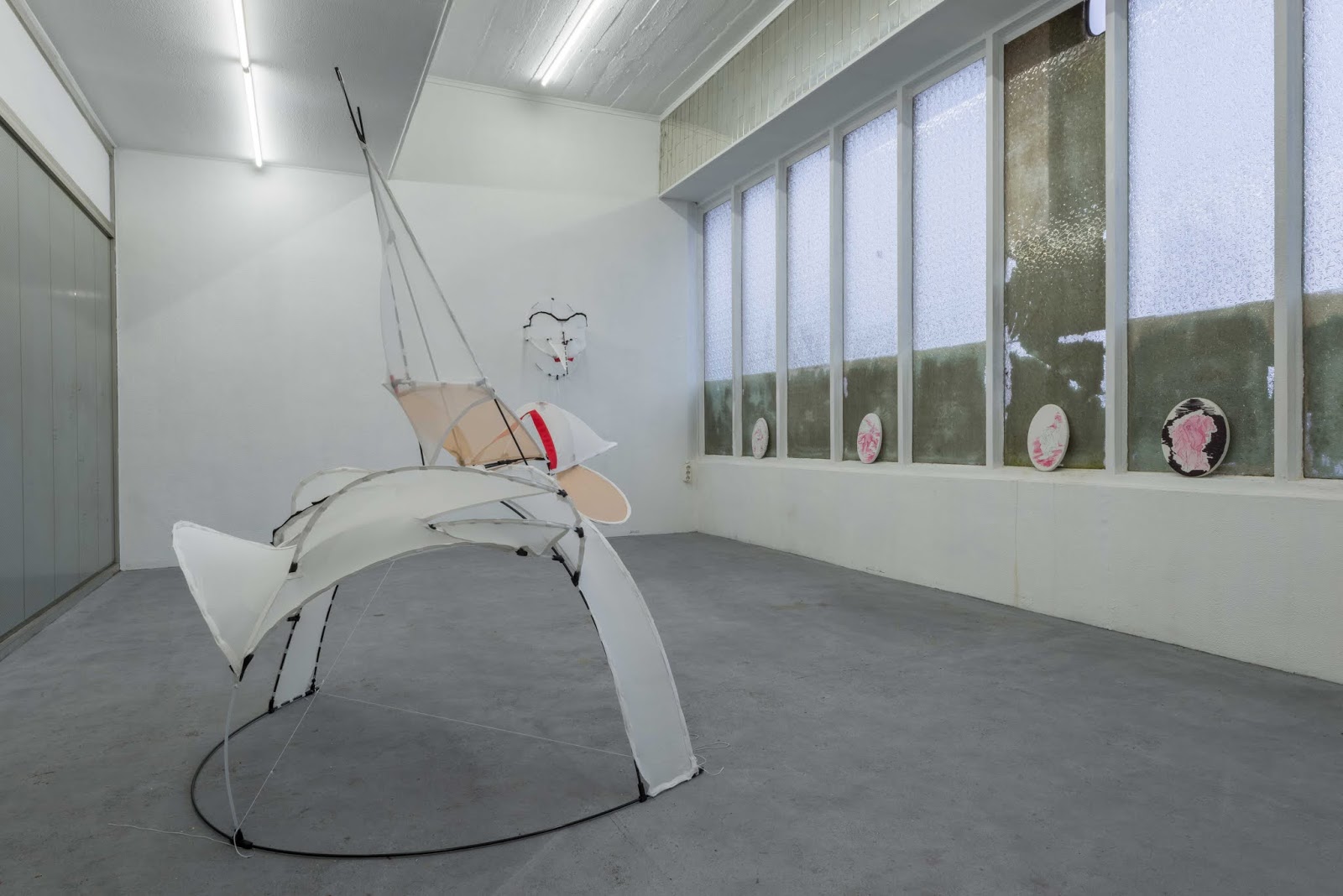 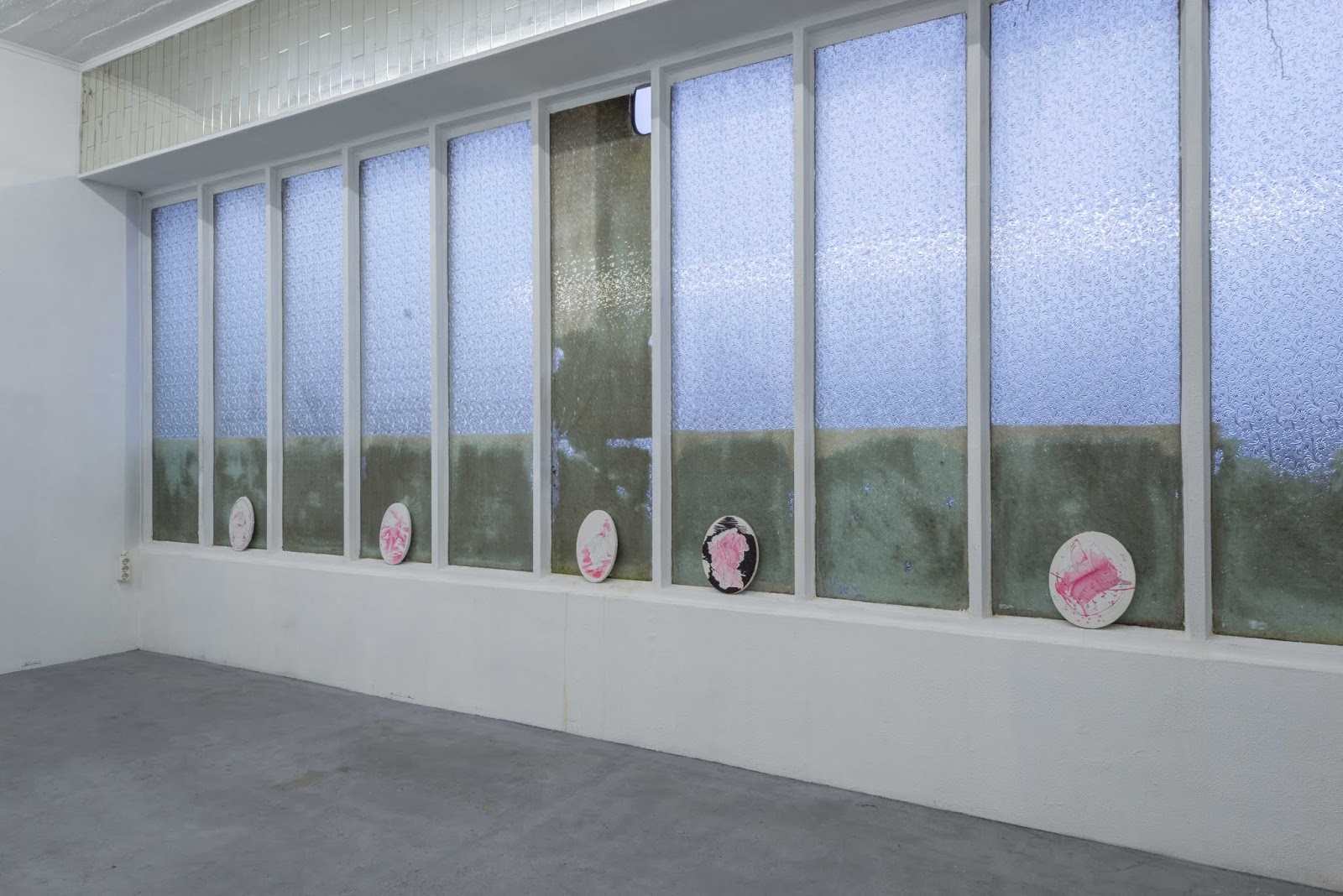 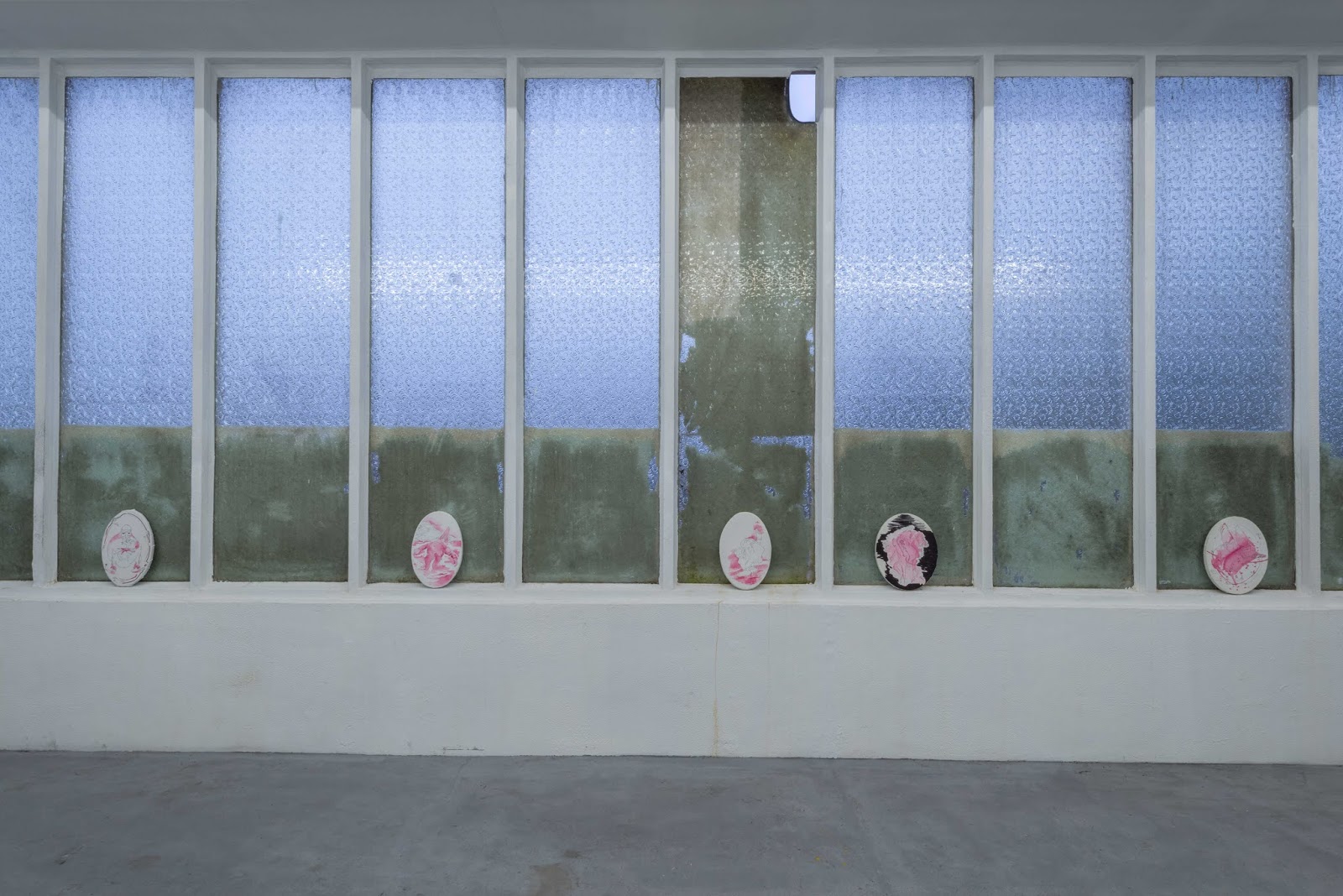 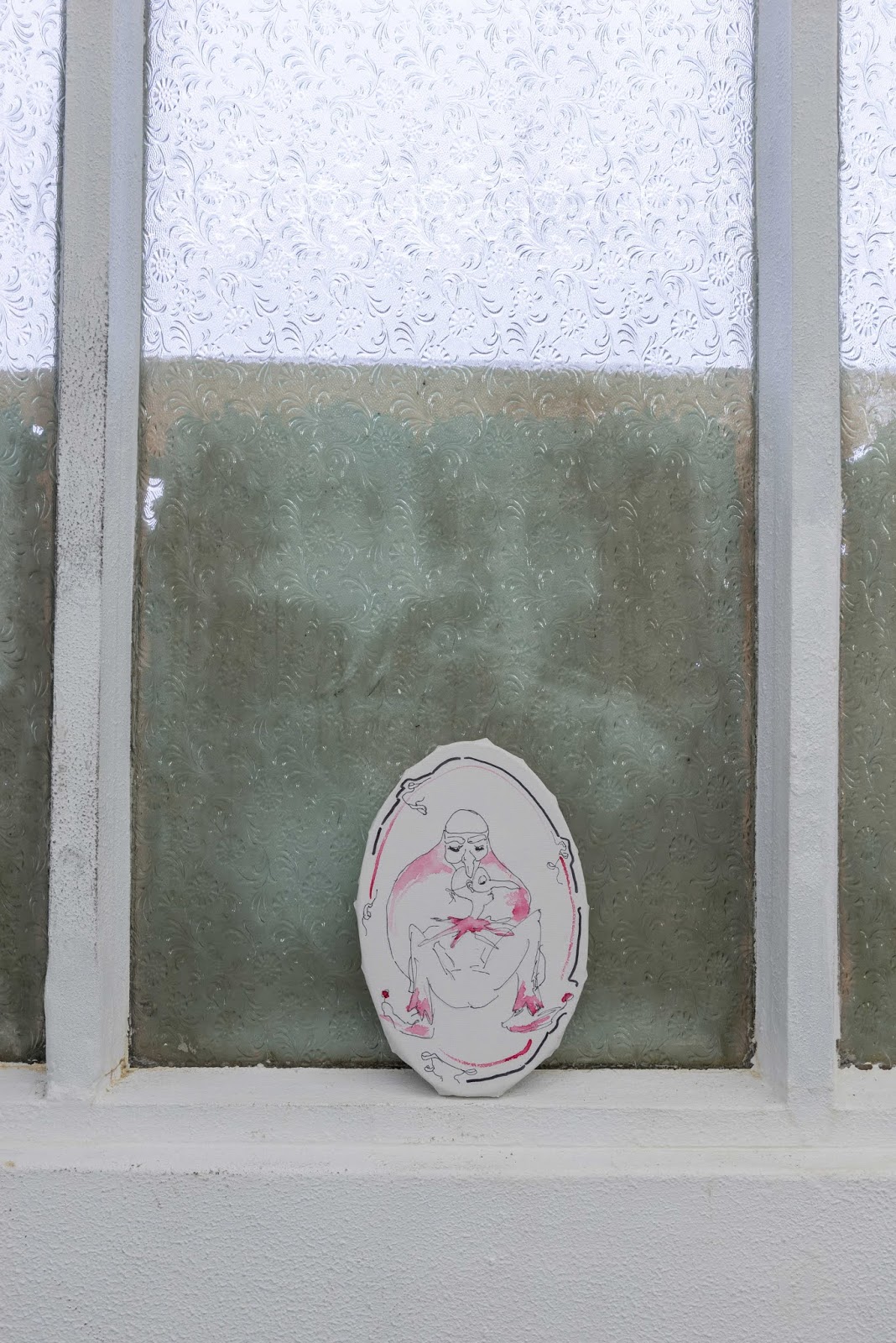 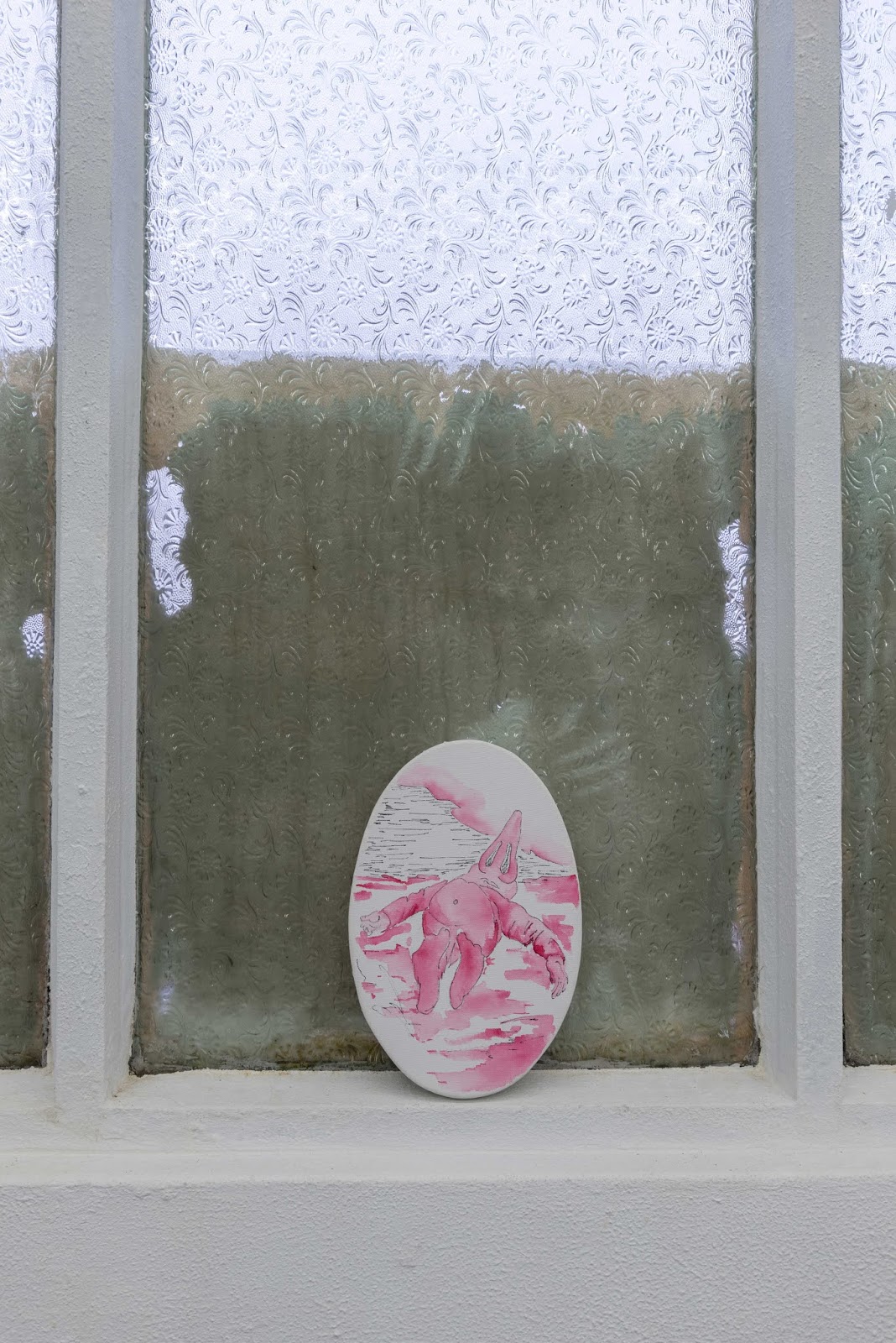 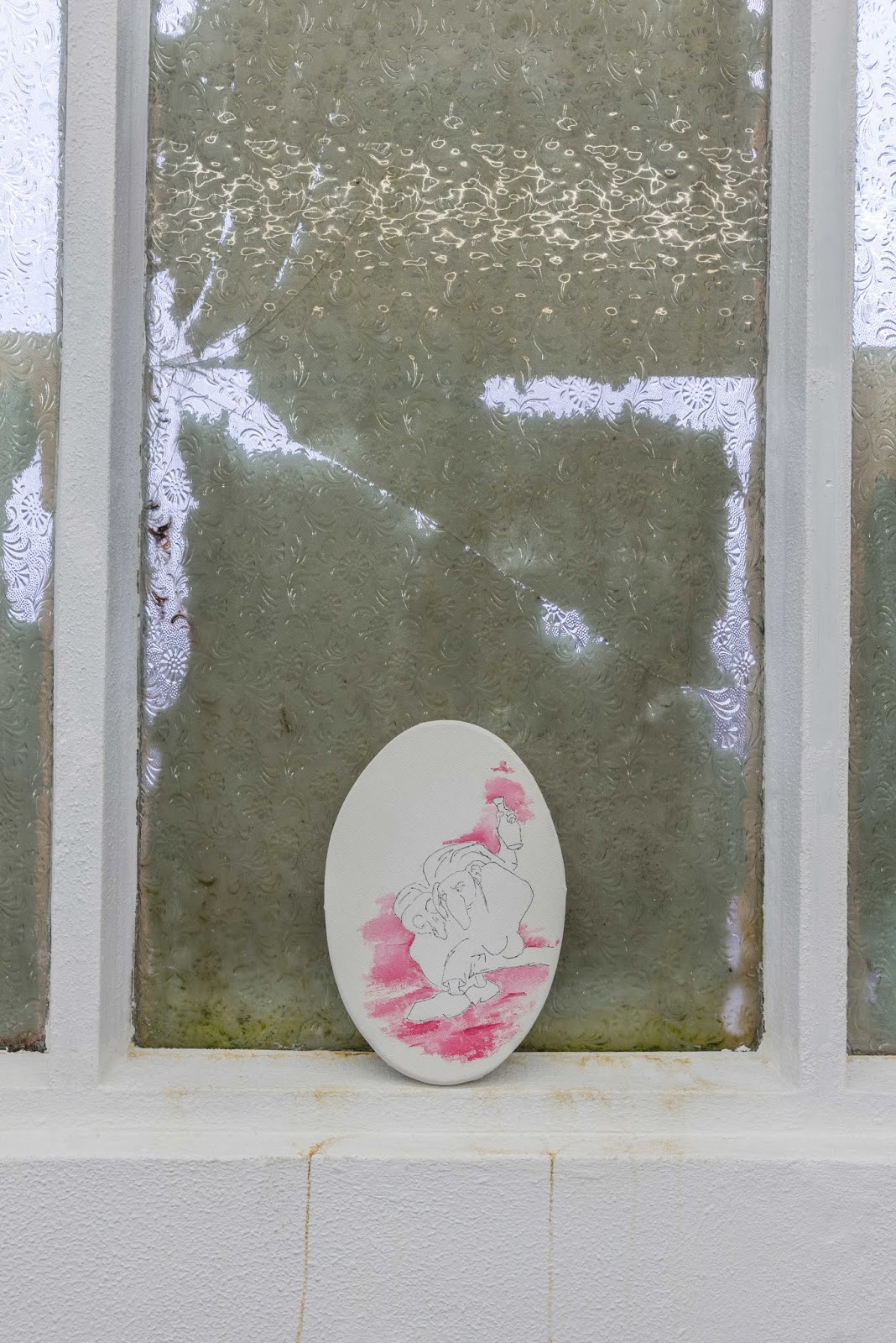 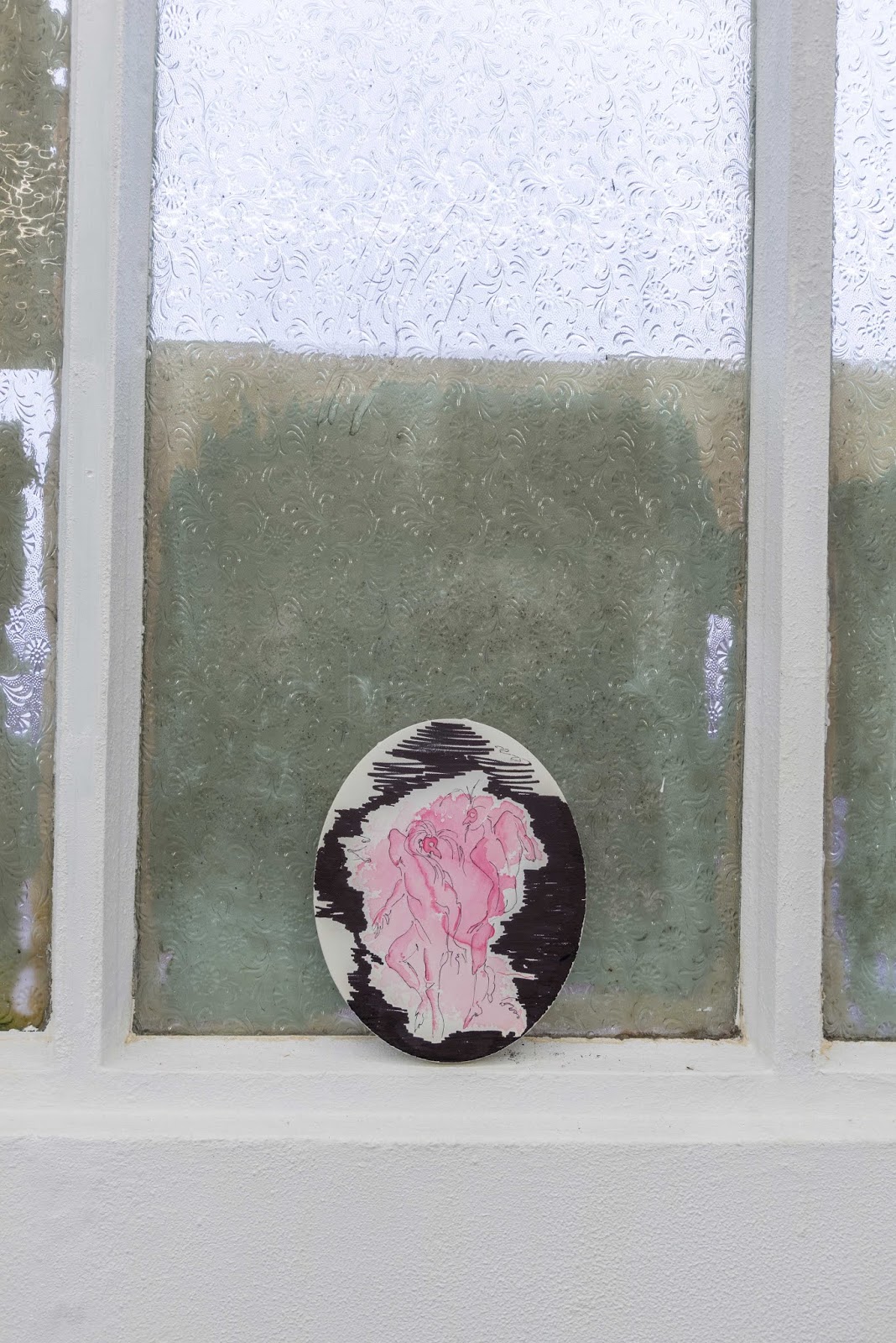 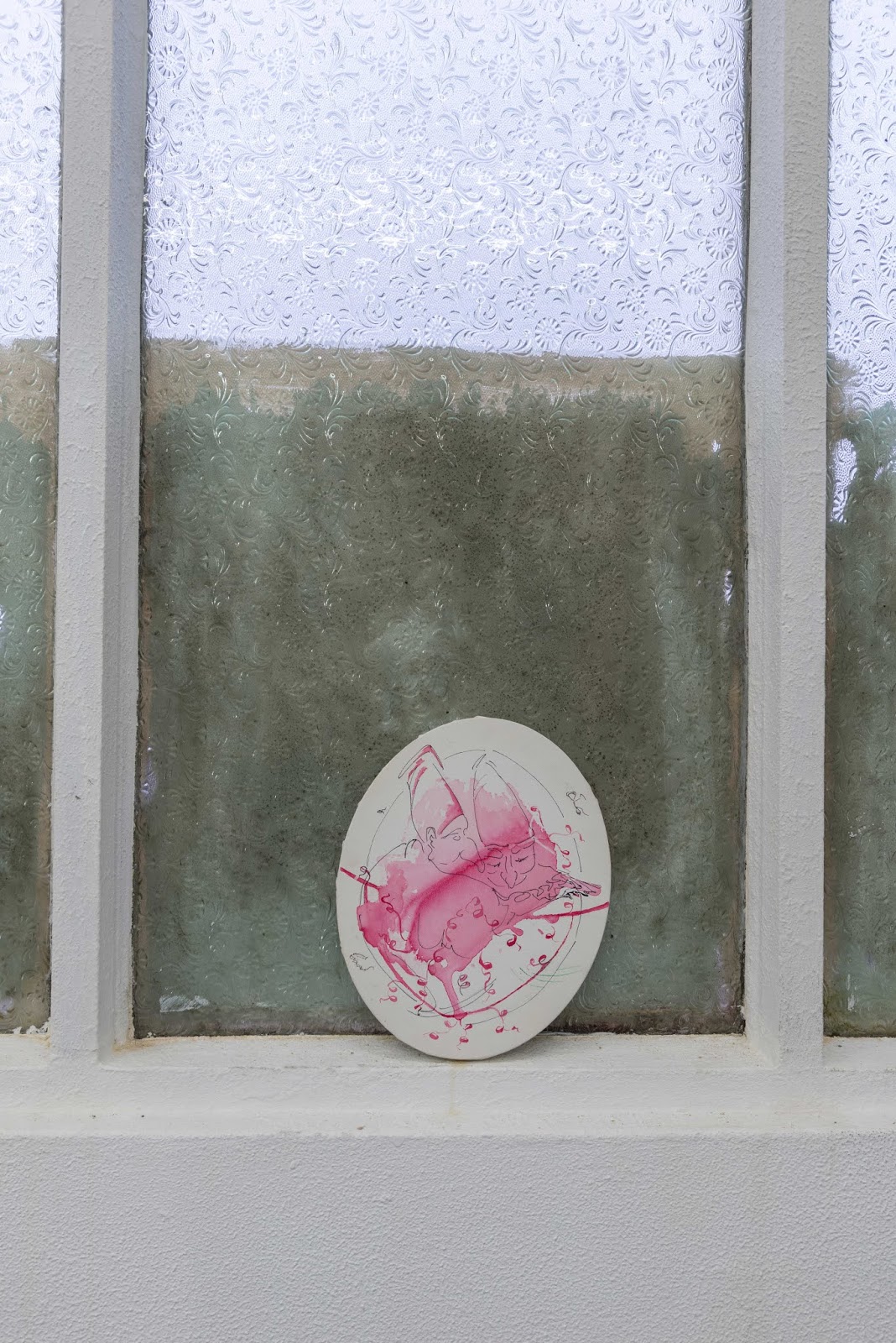 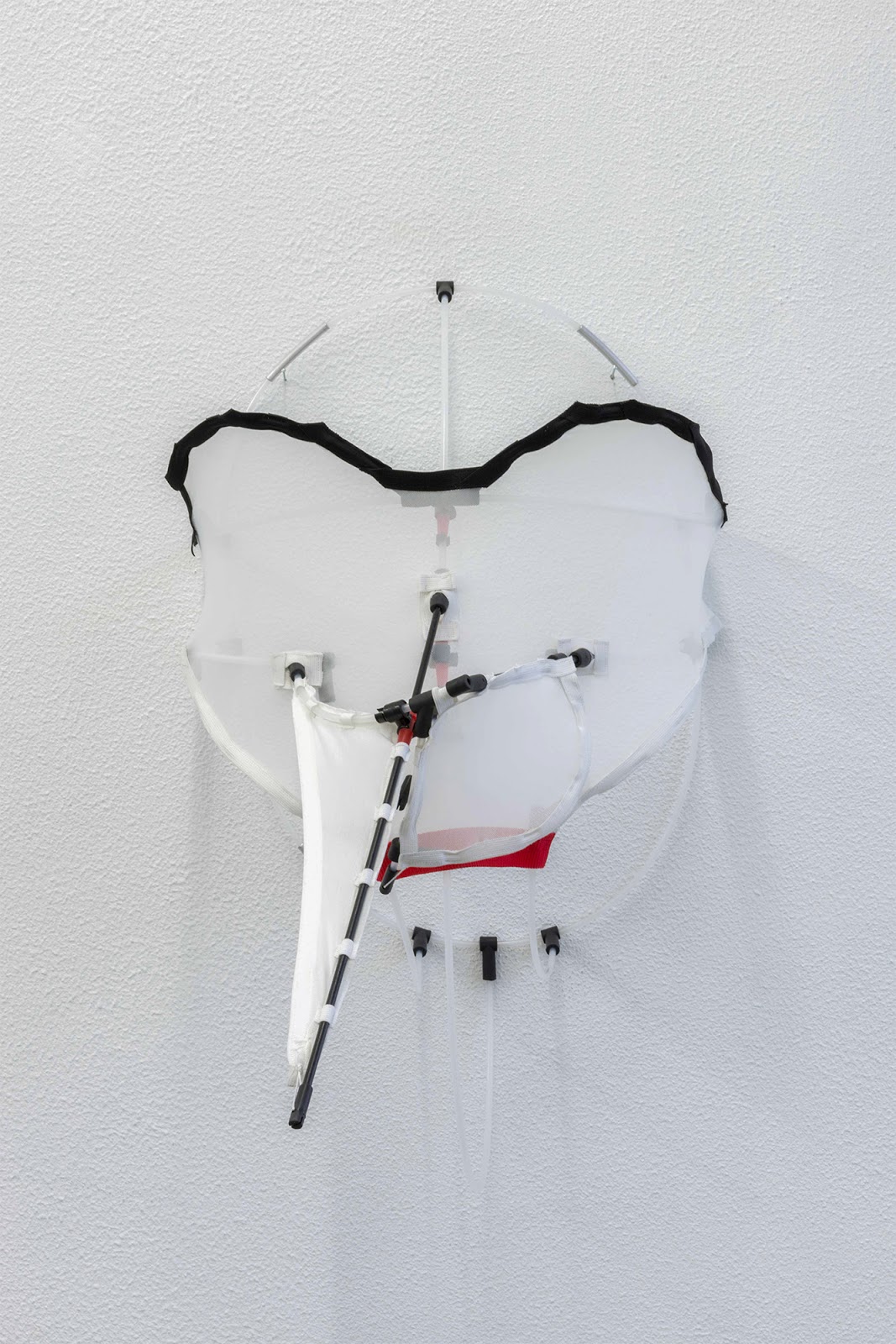 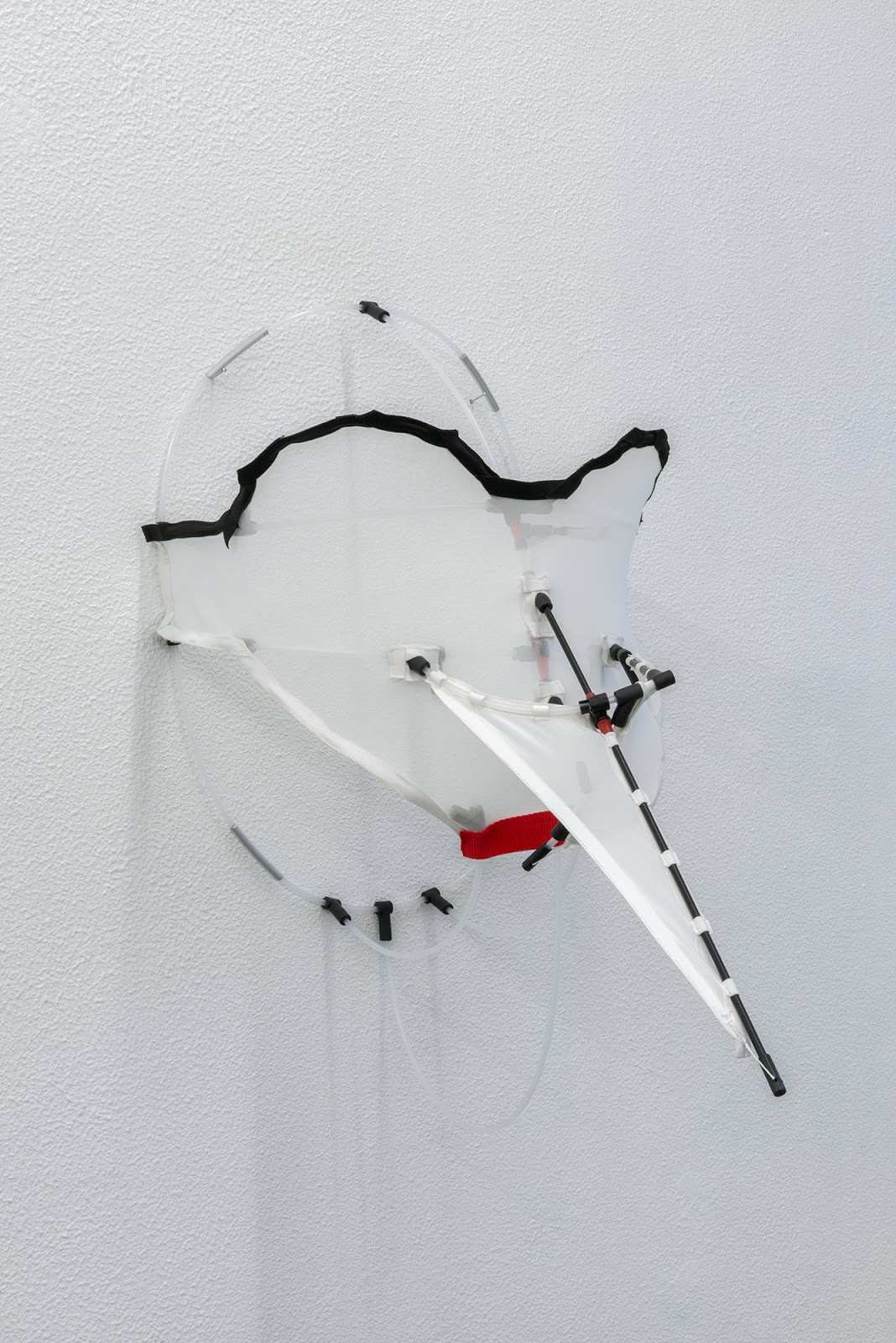 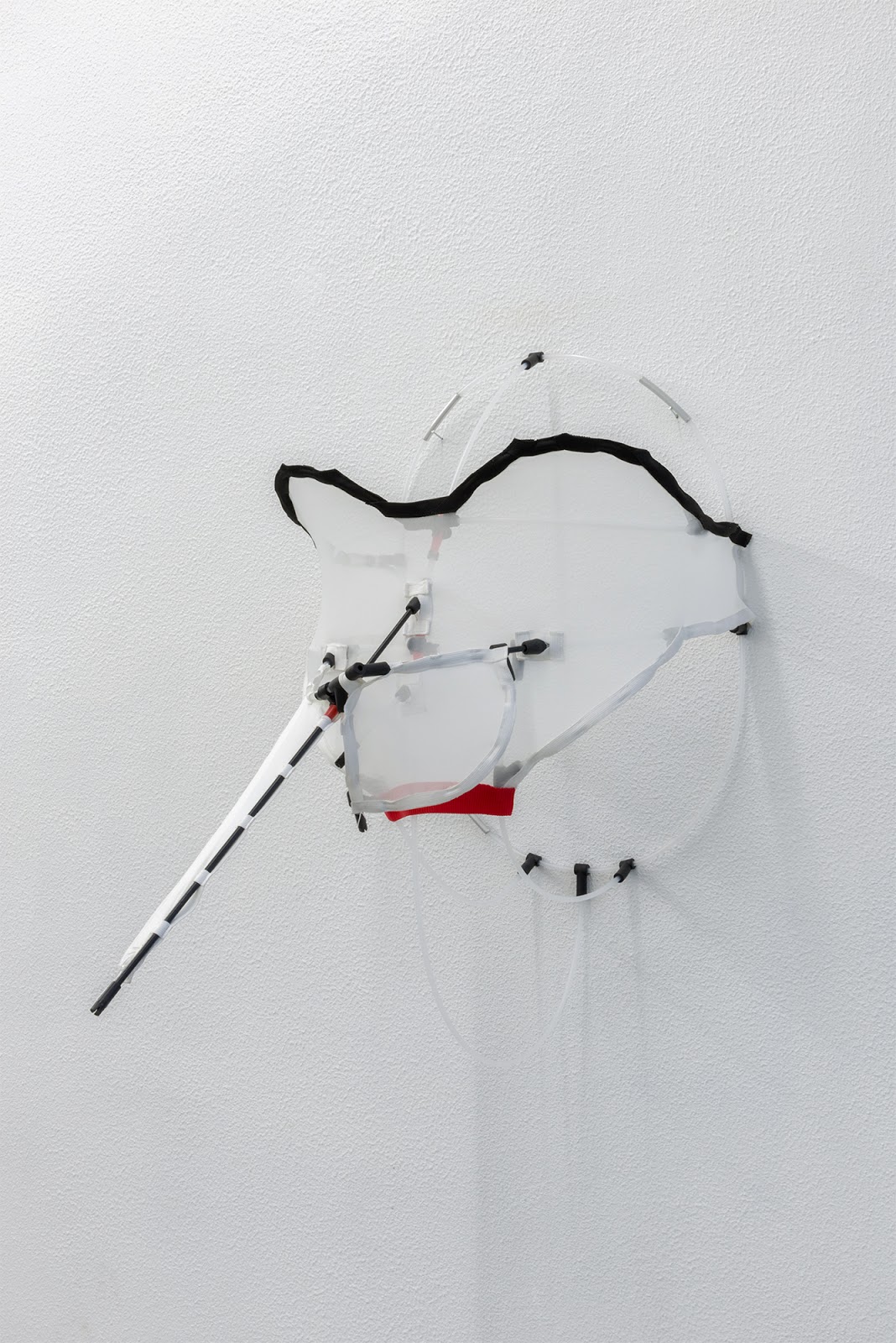 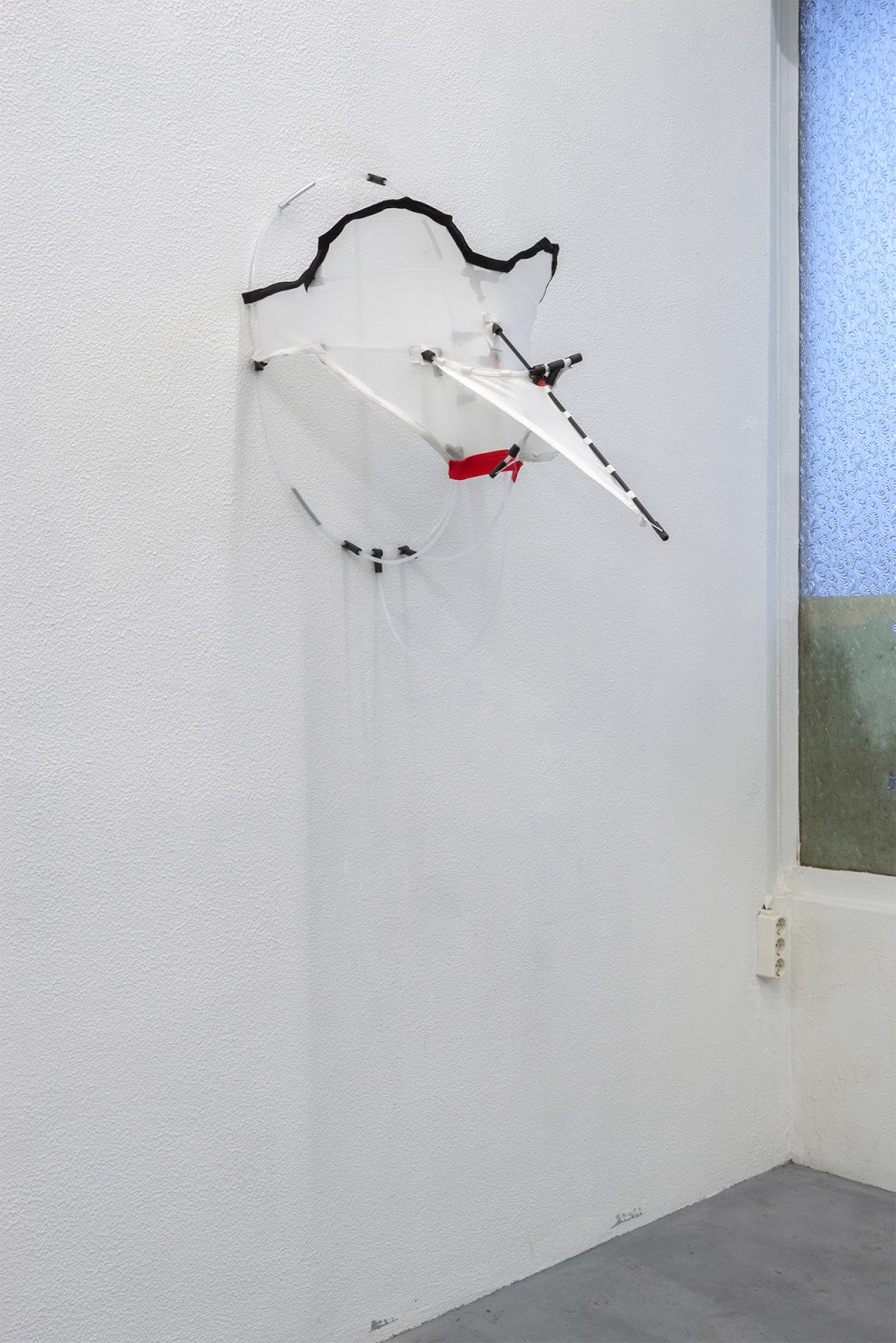 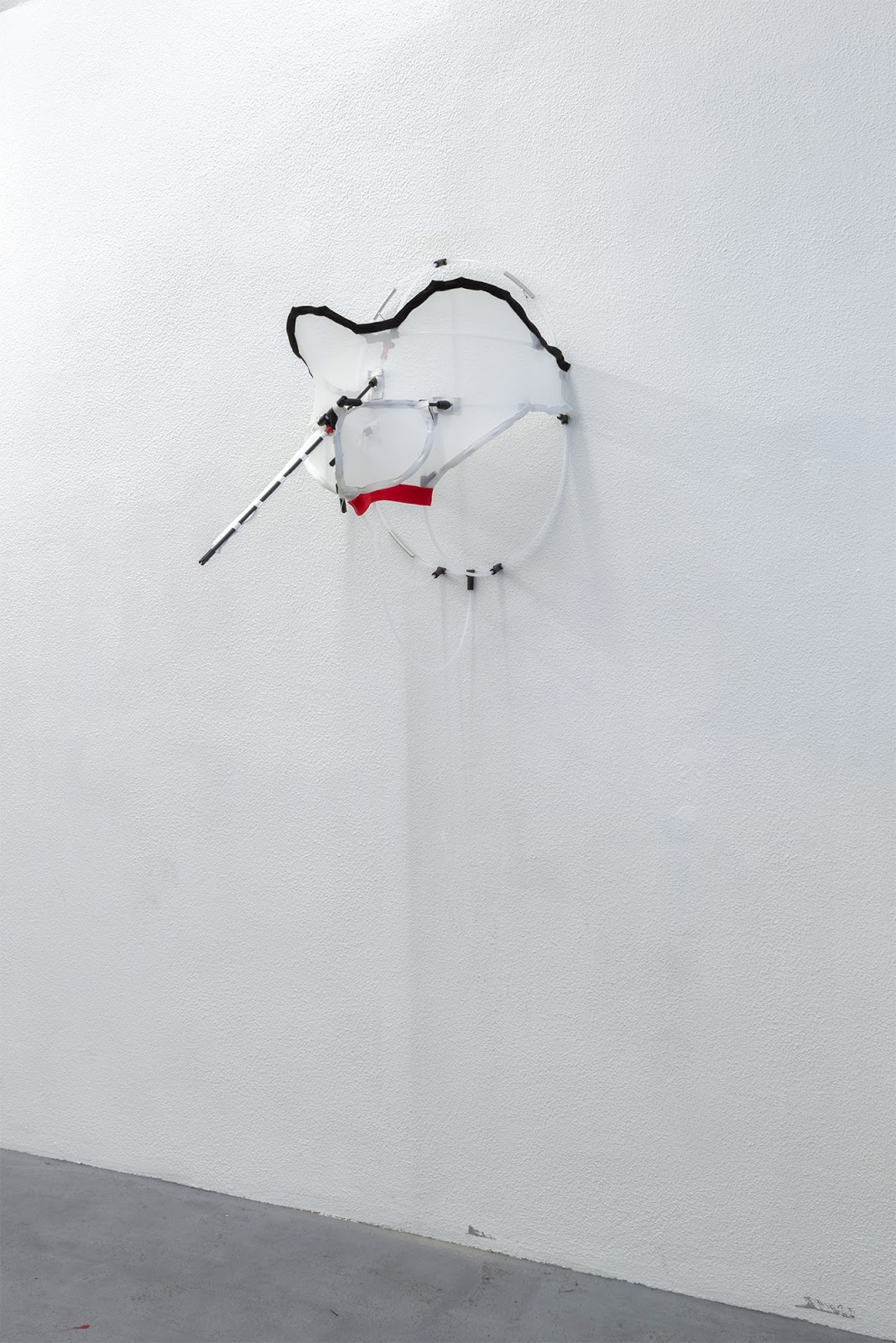 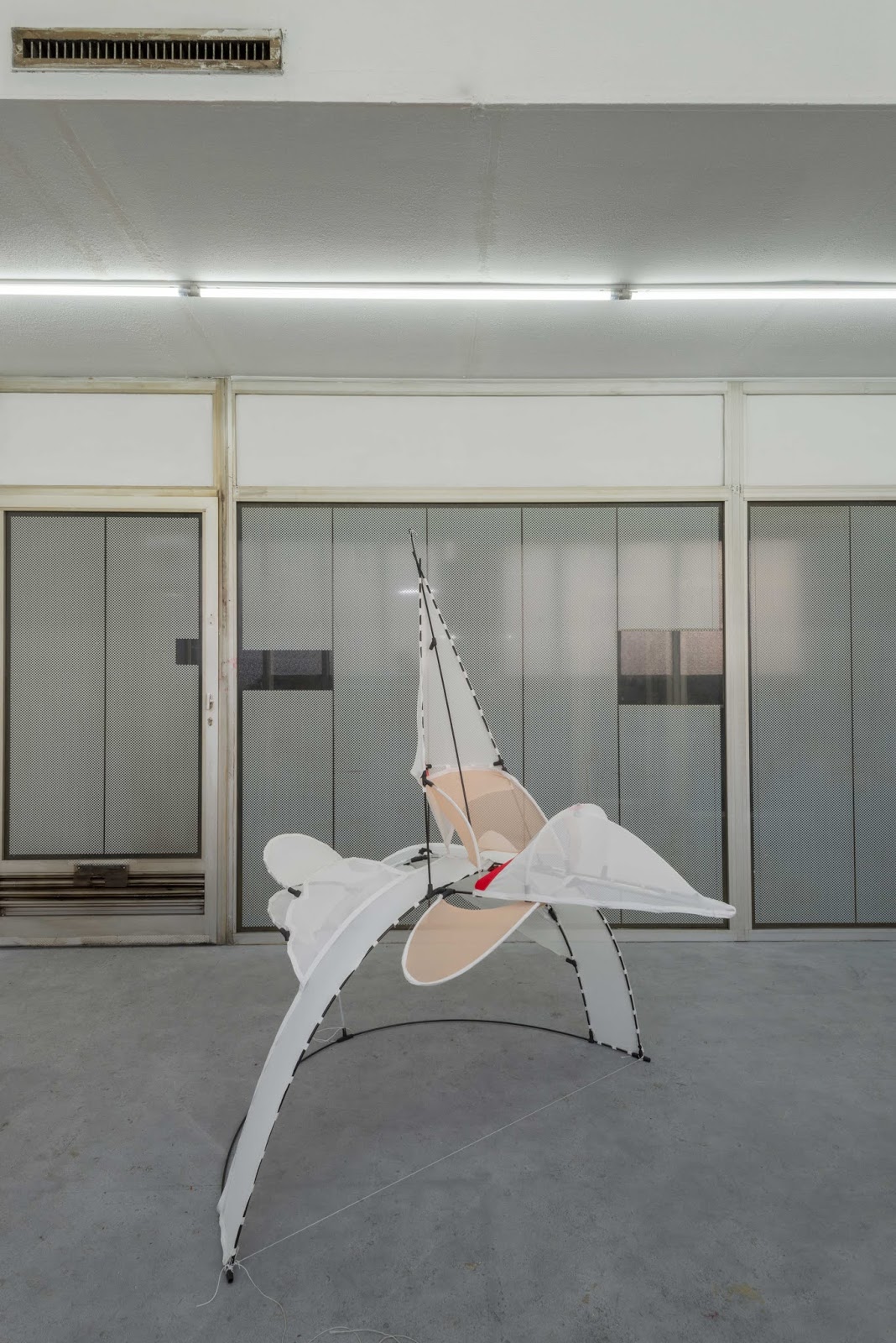 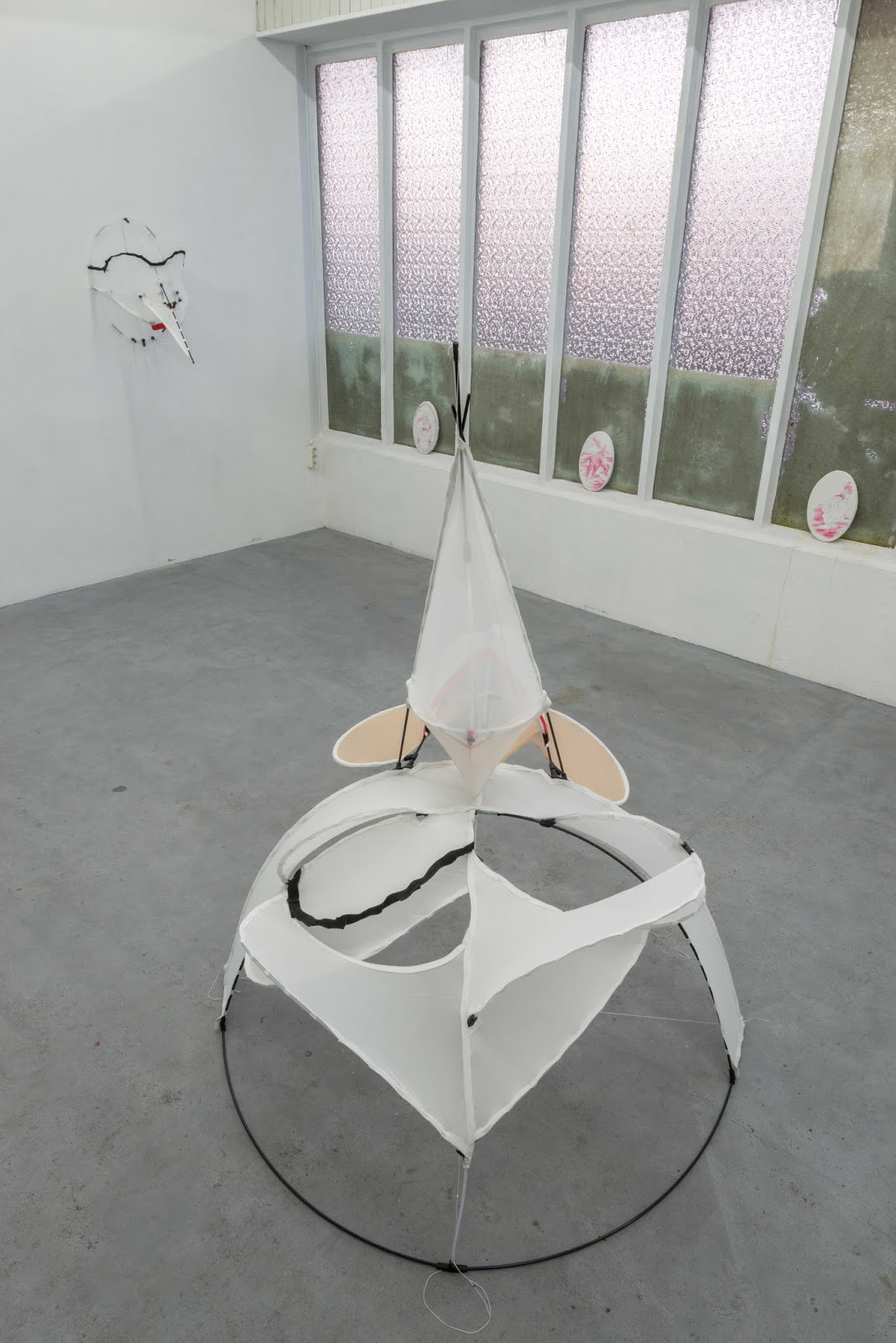 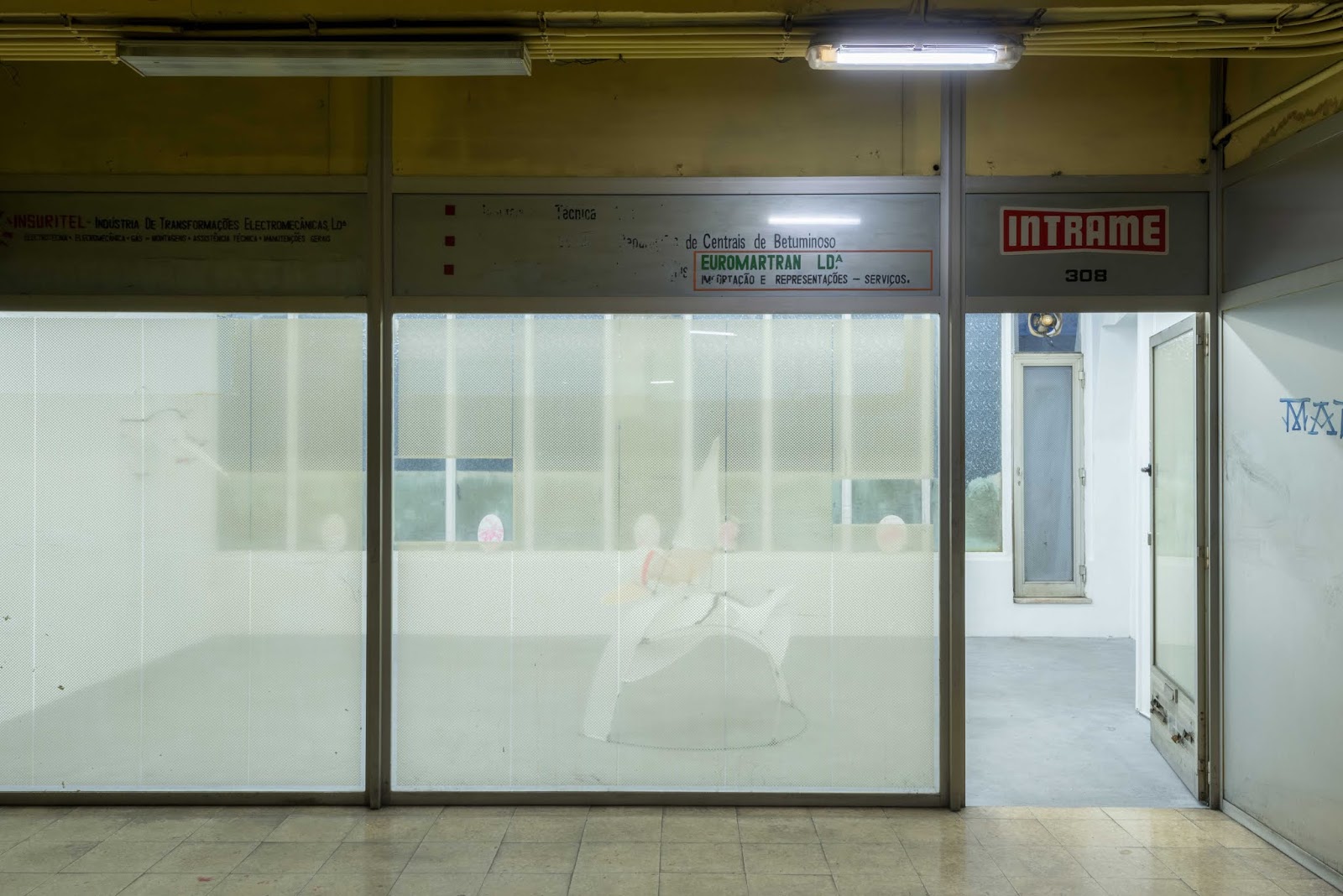 “Please don’t make me say this in front of the camera.“
I guess we have to start somewhere: it‘s the second trip we‘re on together, installing an exhibition, discussing, eating, filming. We only have a loose narrative in mind, so I just go along with my role in this. Our non-acting hasn’t necessarily improved since the last shoot, but with the right filter maybe no one will notice.
“So you will play the art critic. We should get you a pair of glasses! I want you to write a praising review about my show!“
In lack of a better disguise I crawl back into the hood of my sweater. Glasses might be a good idea. When we enter the exhibition space, some of the works are still in the making: see-through fabric, thread and poles from tents and crinoline cages are all over the floor. The ones already installed form two large scale masks, derived from the carnivalesque masquerade of ‘Commedia dell’arte’. Bigger than a human head but too small to inhabit, the partly deconstructed and translucent sculptures shift between costumey object and provisional architecture, built on the permeable border between acted and real . Their materiality is similar to older works of Sofia’s, but these ones seem to have incorporated a sense of performativity.
“Why is there banana peel on the floor, guys? Can someone clean this up?“
Despite her slapstick humor, these particular leftovers are not causing any amusement. After another snack we clear the floor and move everything out that isn’t part of the show so we can get a better sense of the space. The camera needs to charge so I read the text Sofia has e-mailed me for research.
“Help, I’m bleeding cranberry juice!“
yells a clown in Wsewolod Meyerhold’s production of Alexander Blok’s Balaganchik, ‘The Fairground Booth’, self-revealing the injury as an act of acting, marked by whichever red liquid is available to pose as blood. Working with the set of characters and masks from the tradition of Commedia dell’arte, Meyerhold not only discloses the means of theater: theatricality itself is what is being put on stage. Commedia dell’arte developed from Italian touring theater companies in the 16th century, with fixed roles that represented clichés of different social classes, signified by ascribed names, costumes, gestures and masks. And here we are: the artist, the boyfriend, the critic, the curator, the cameraman.
“Help! I’m bleeding cranberry juice! Ocean Spray! Ocean Spray! Help! – Was that too obvious?“
Borrowing the line from Balaganchik as the title for her show at Kunsthalle Freeport, the mask sculptures appear to reflect Sofia Duchovny’s approach, termed by her as ‘Acted Reality’. Strategies of exposing and complicating staged-ness have taken on a key role in Sofia’s artistic practice: In a recent series of lecture performances she developed a fictitionalized character, a slightly heightened version of her artist self, blurring the lines that define person and persona. Somewhere between stand-up comedy and artist talk, this more confident and more stressed version touches upon questions of shame, authenticity and the pervasive requirements to perform. When we meet up to discuss the show and possible ideas for the text, I’m uncertain which of the versions I’m having coffee with. Already in character, I make sure to sound extra critical.
“Did you know that the word cranberry comes from the crane bird? The European colonizers in the Americas thought the flower’s calyx resembled a crane’s head. And your masks look like bird heads. They have a beak, similar to those plague masks. Just saying. If this isn’t supposed to turn into an endless trailer, we need an actual plot!“
Whether political news or personal stories – these days everything is being told in serial installments, well portioned episodes that draw and define our attention and its span. Living, documenting and fictionalizing reciprocally propel each other. In a genre-defying attempt to work with the processes of exhibition making as artistic material, Sofia Duchovny proposes narratives simultaneously meta and center that playfully transgress the romantic, tragic and comic roles that culture holds available.
“Can we do this one more time? A little louder this time. Lean into the character!“