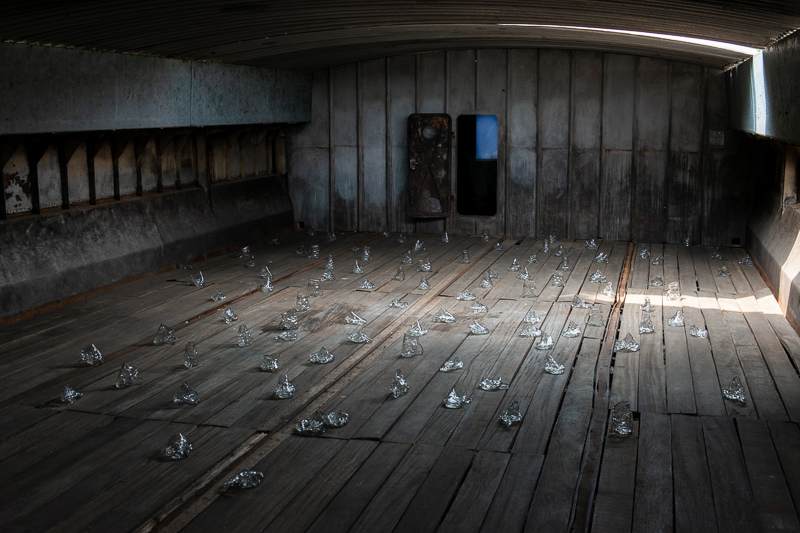 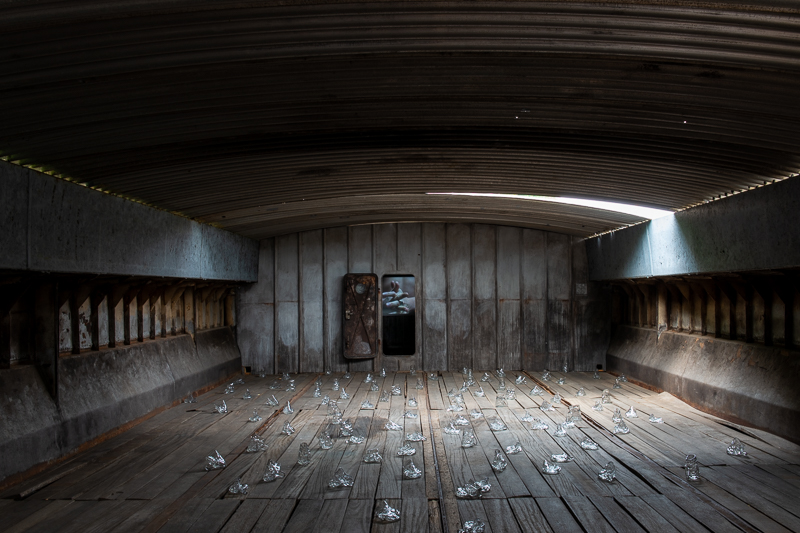 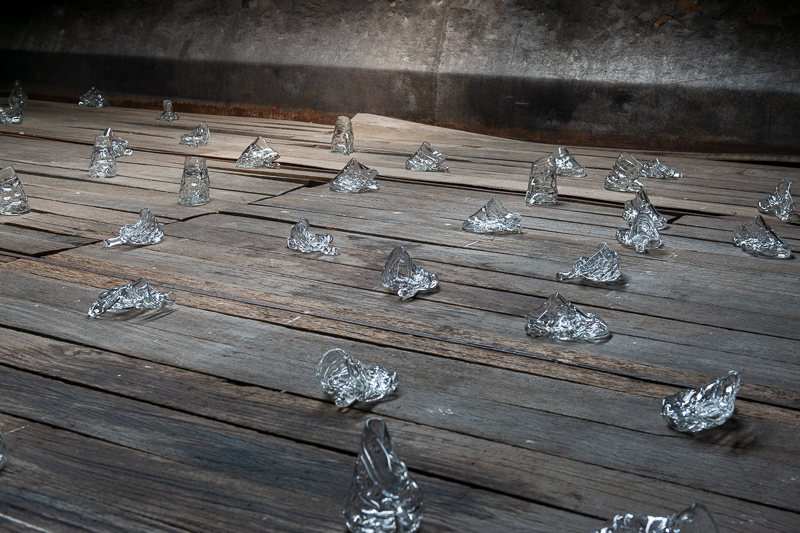 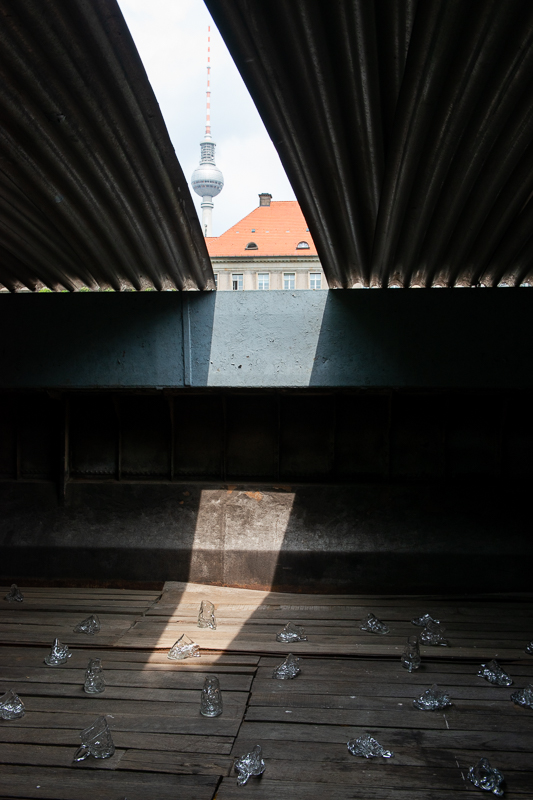 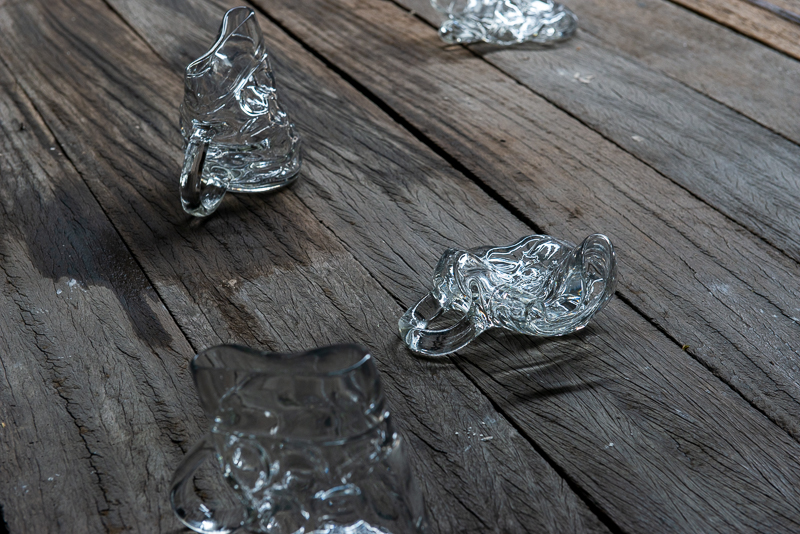 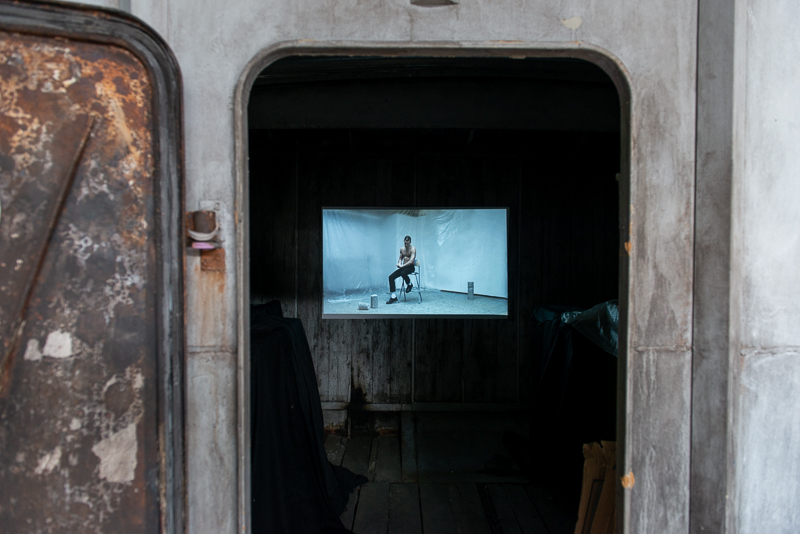 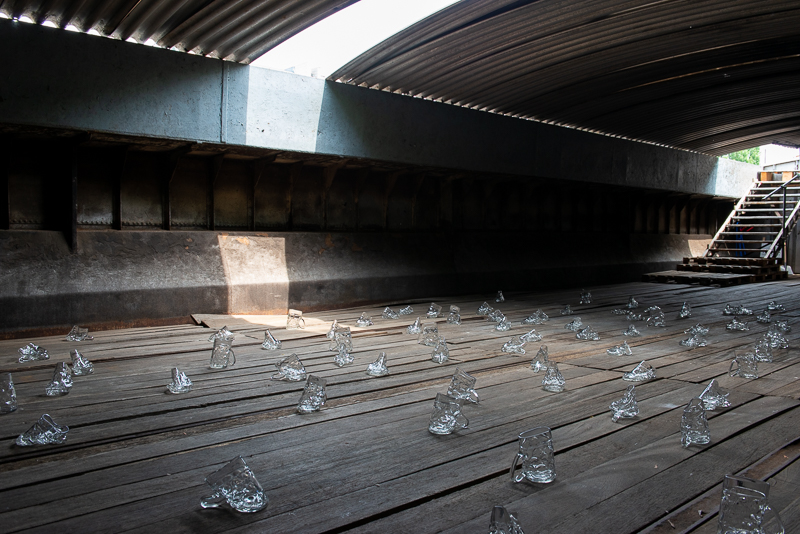 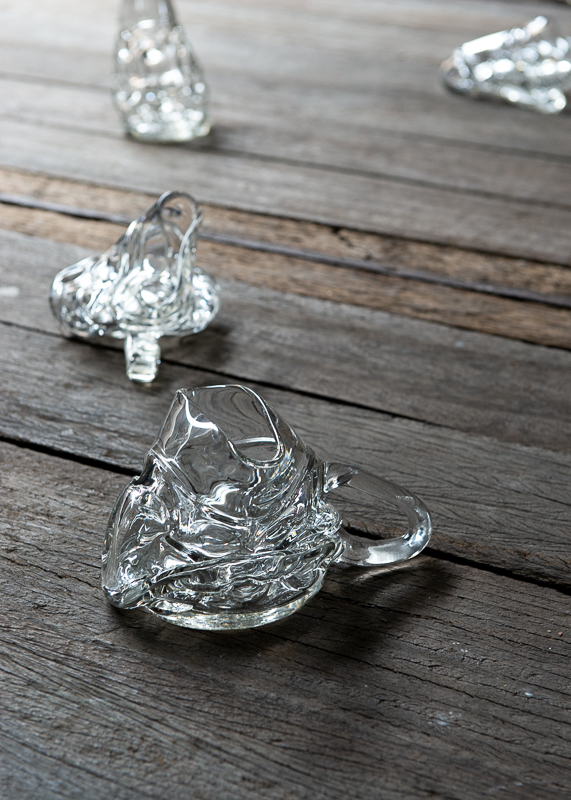 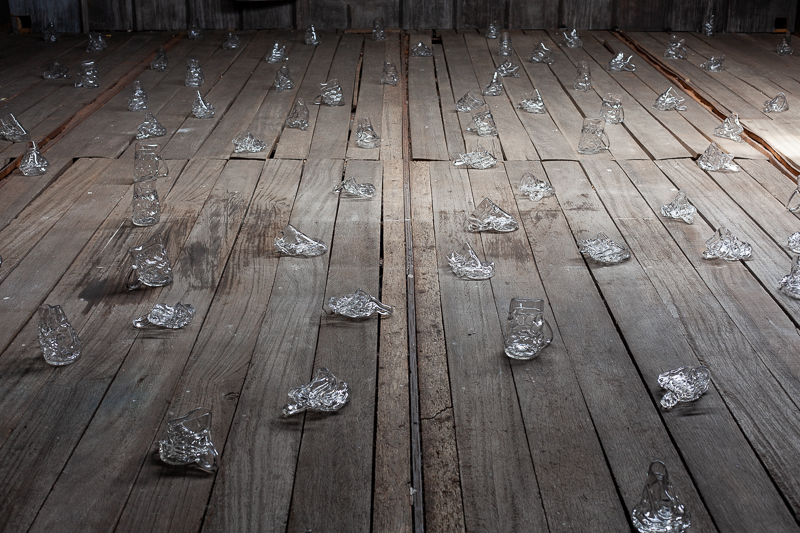 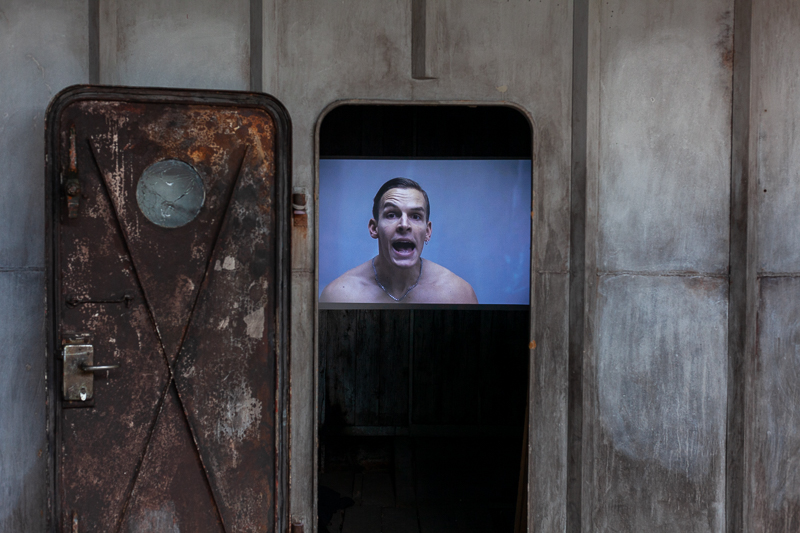 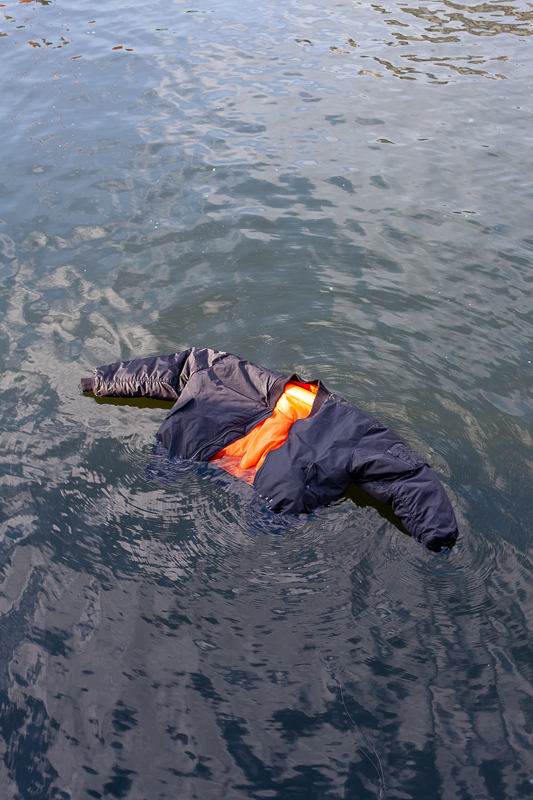 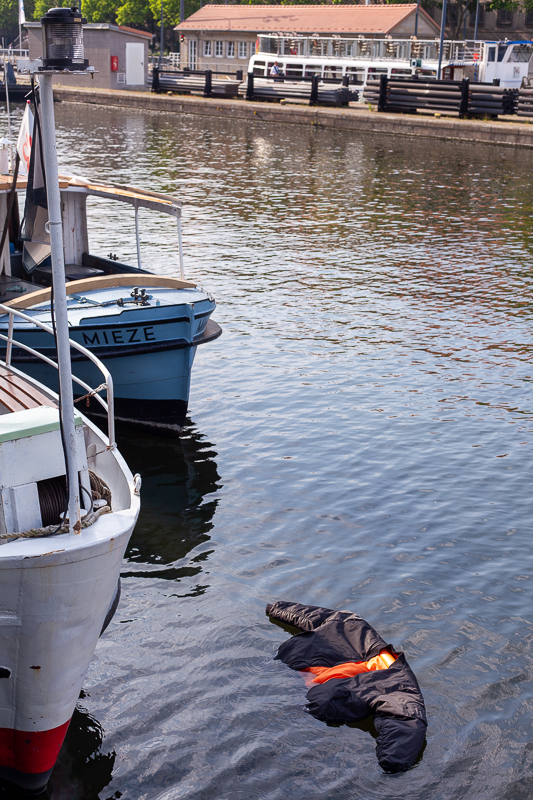 In his artistic practice, the artist Eric Meier, born in 1989 in East Berlin, deals with the social effects of German reunification. Starting from a pronounced interest in urban space and architectural structures, he searches for traces of the post-socialist reorganization. For many years he has been photographing places in the former GDR and collecting them in an extensive archive, which serves as a starting point for his more recent works. The pictures mostly capture ruinous and weather-beaten buildings and streets in the public space, which are increasingly disappearing from the cityscape. They concern the artist's own life story - his experiences in his family and in the surroundings of the small East German town. At the same time, they visualize the perceived failure of the socialist idea and the effects of capitalism after the reunification. Meanwhile, Meier develops his works more and more into the space. In the scenically designed installations, different media such as photography, moving image, sculpture and text often meet and create ambivalent contexts of meaning. In this way, they address the social and political tensions that emanate from the differently lived realities in East and West Germany.

The exhibition Goodbye Deutschland on the former coal freighter "Heimatland" at the Fischerinsel in Berlin is named after the installation that Meier produced especially for it. It consists of 100 melted beer mugs arranged in the belly of the ship. Already with the exhibition title, Meier reflects on the meaning of the place and relates it to his work. Even though this initially expresses the desire for departure and farewell, it contrasts with the historical name of the ship. At the same time, Goodbye Deutschland refers to the same-named docu-soap broadcasted on German entertainment television. The show accompanies families in their emigration, who during the farewell in Germany, as well as their journey and arrival in the destination country, tell about their motives for the new beginning, their dreams and feelings of home. Often personal dramas and existential fears play a role. Over the course of the various seasons, however, the viewers gain an intimate insight into the emotional and biographical background. In some cases, the attempt to emigrate also proves to be an economic, cultural and bureaucratic failure, which comes to a premature end at the protagonists' place of origin. The programme sheds light on the social milieu and the individual search for the life the drop-outs dreamed of. It thus deals with 'typically German' sensitivities, carrying them further and embedding them in a tension arch suitable for a series production.

The struggles that accompany the departure into new territory are also reflected in the objects on display. The beer mugs, gathered together in a group, have collapsed. When Meier exposes them to a temperature of around 700 degrees Celsius during the melting process, they lose their original condition and literally go limp. In this state, the mugs themselves look like drunken passengers who have lost their orientation. The ambivalent references meet in the cult object of the made-to-measure jug, which Meier uses as the basic material for his installation. On the one hand, the drinking vessel is symbolic of the cliché of a sociable German 'beer nation', but on the other hand it also refers to the real dark sides associated with alcohol consumption and social precarity. This metaphorical aftertaste runs through the works and at the same time establishes references to a social dimension.

In the site-specific work Für Rosa, Meier takes a similar approach. If one looks over the railing of the "Heimatland", one can see an orange glowing textile floating in the current of the Spree. The bomber jacket attached to the boat, originally an item of clothing from the military cloakroom, has long been part of the civilian fashion vocabulary. It has not lost its defensive connotation - it can be found on the catwalks of the big fashion houses, within the left- wing scenes, as well as within nationalist and fascist groups. Through this ambiguity, Meier reflects on how contrary levels of meaning can be layered over time and contained in an object.

With Goodbye Deutschland, Meier addresses the ambivalent moment of change within German society, which is accompanied by human disruption and social inequality. The humorous tragedy that runs through his work highlights the proximity between hope and failure. Ultimately, it is the question of perspective that comes to the fore, keeping in mind the various social realities that are often contradictory in nature.