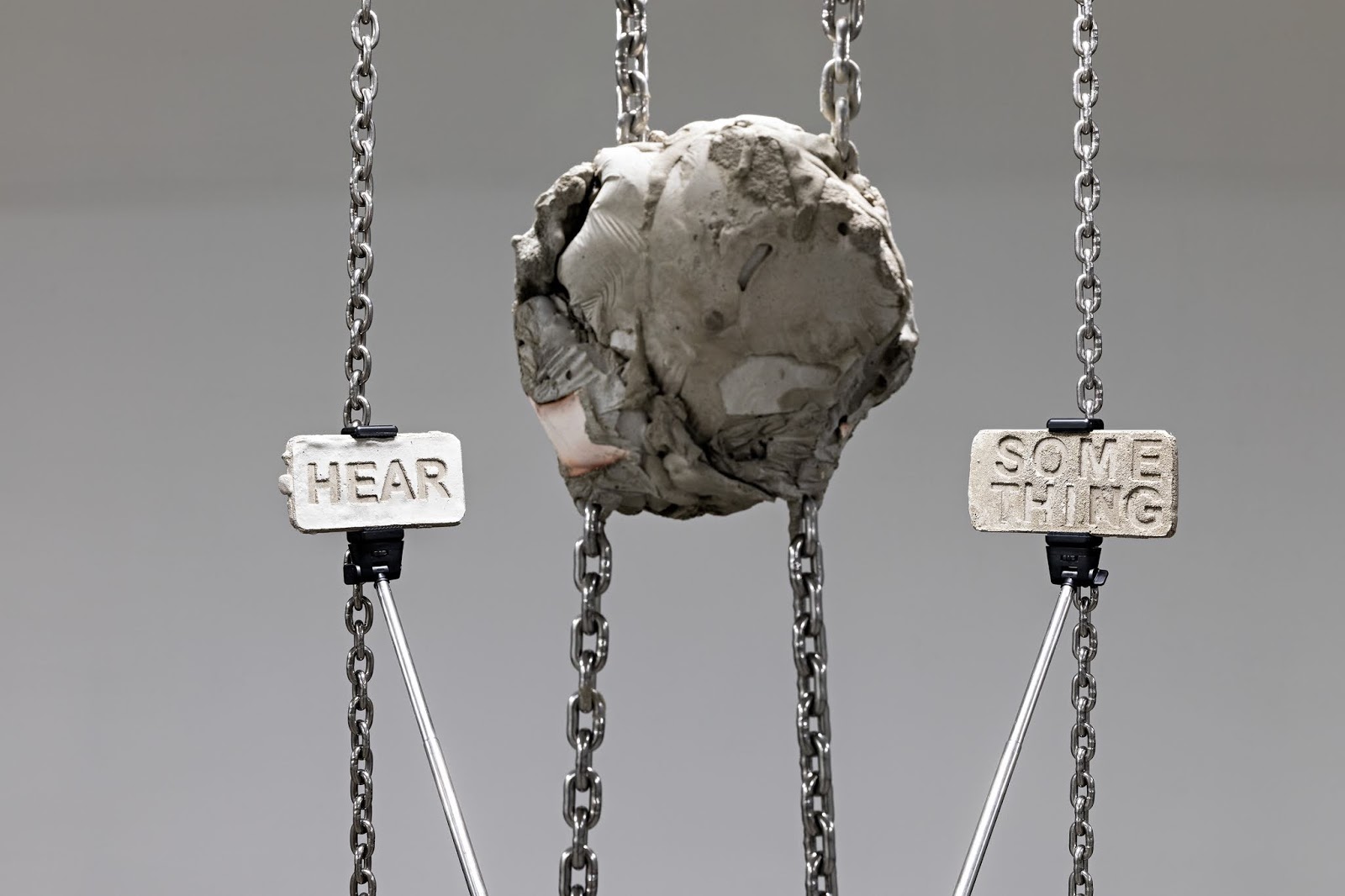 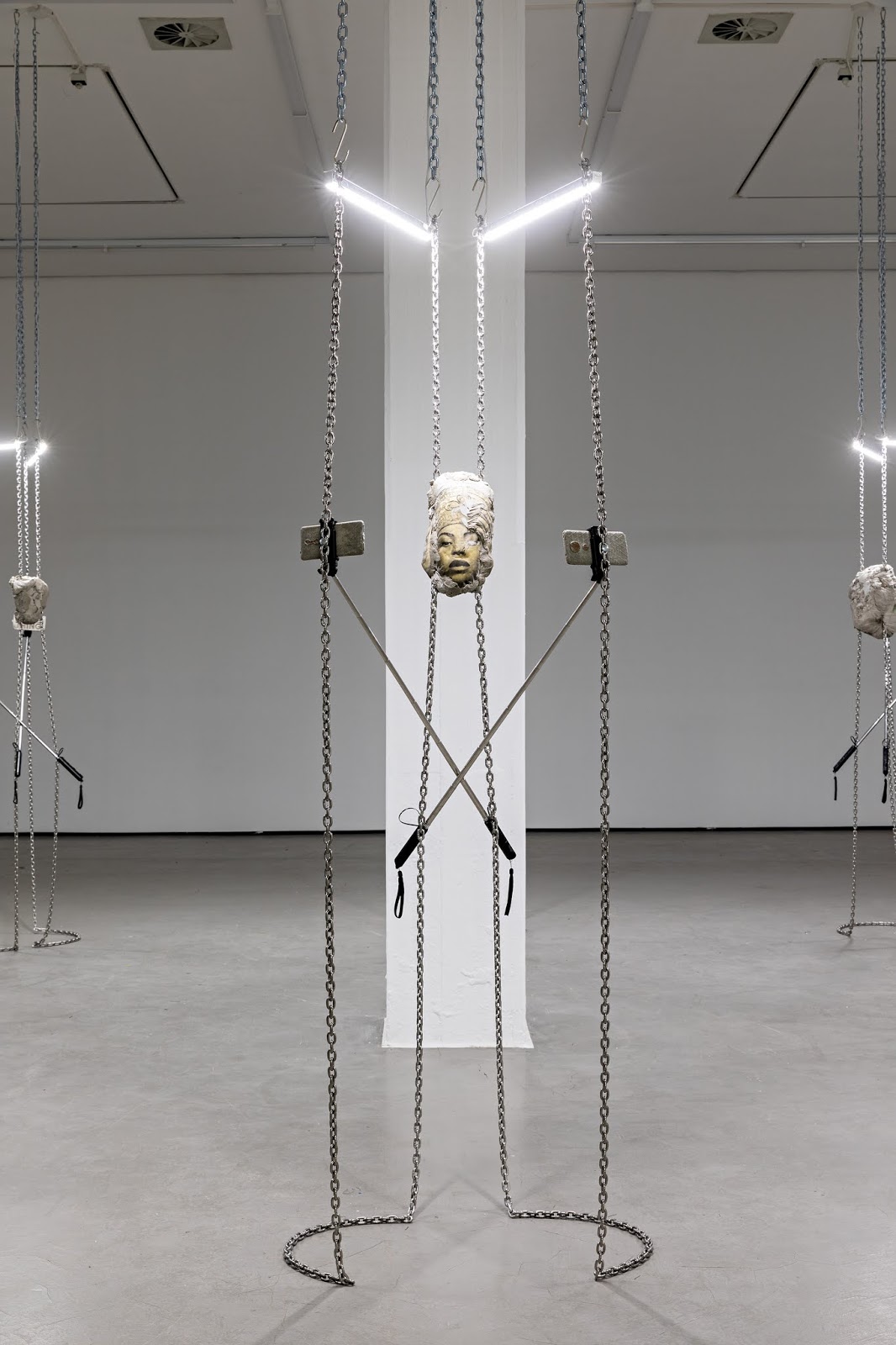 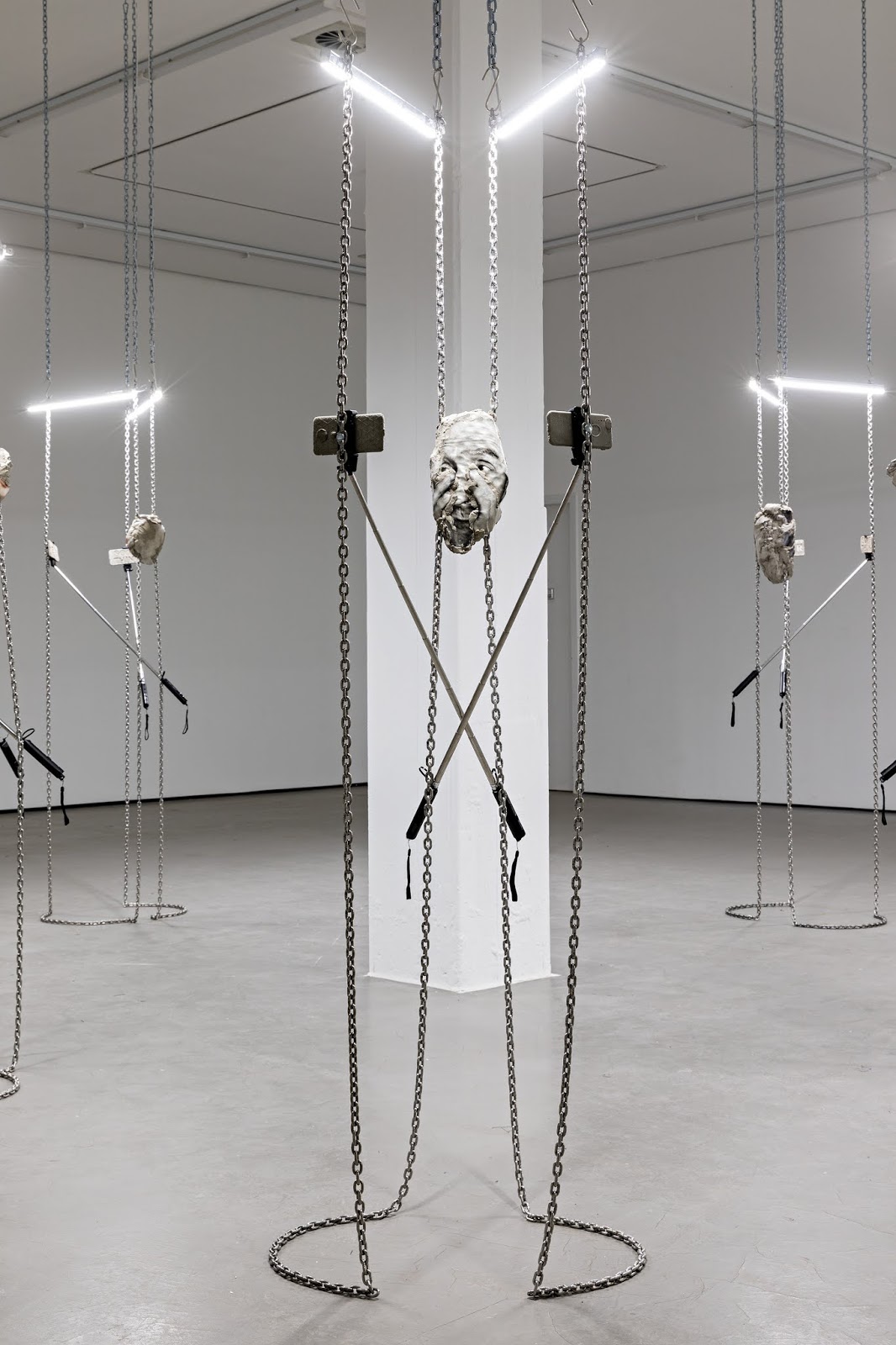 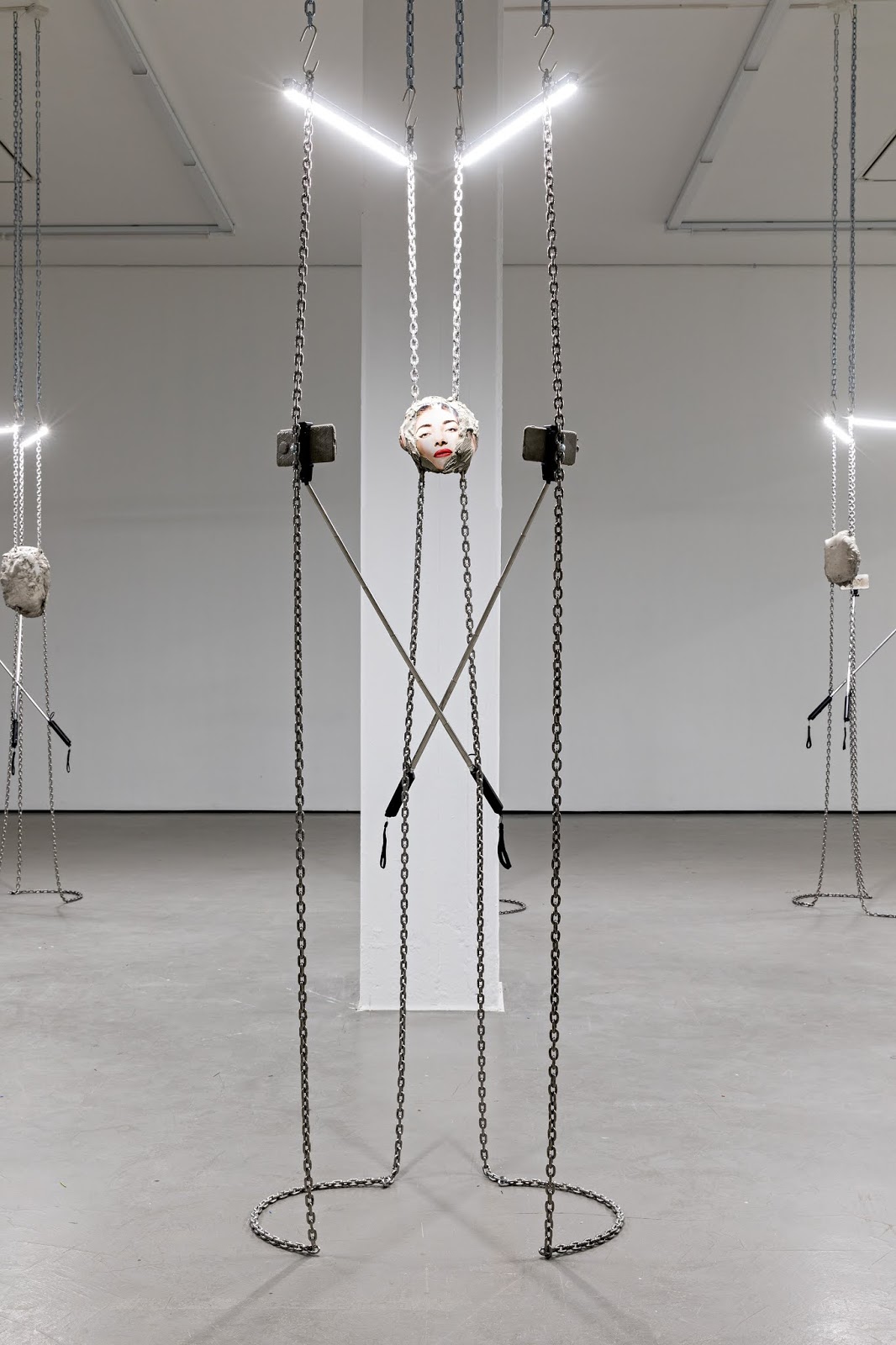 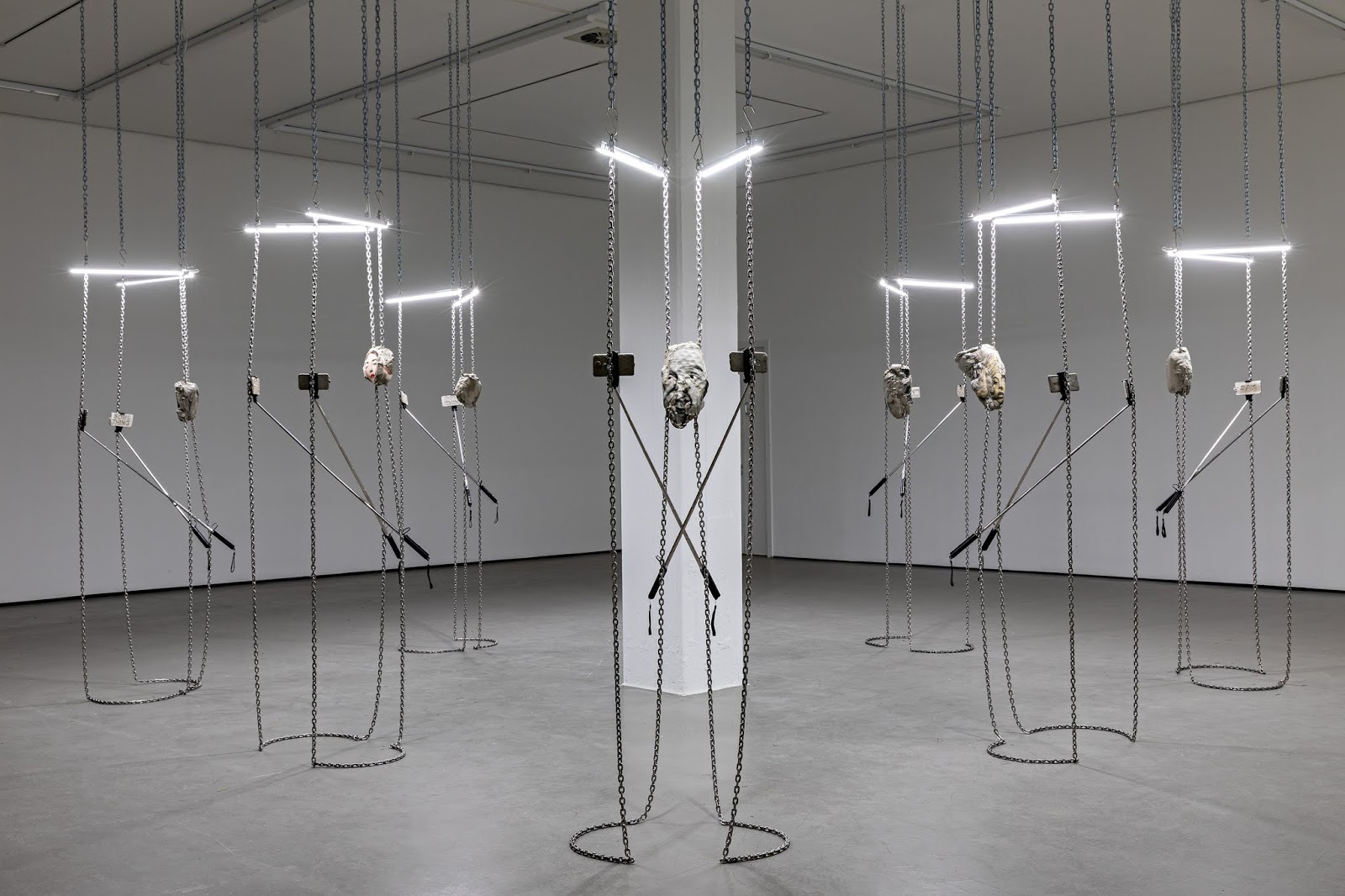 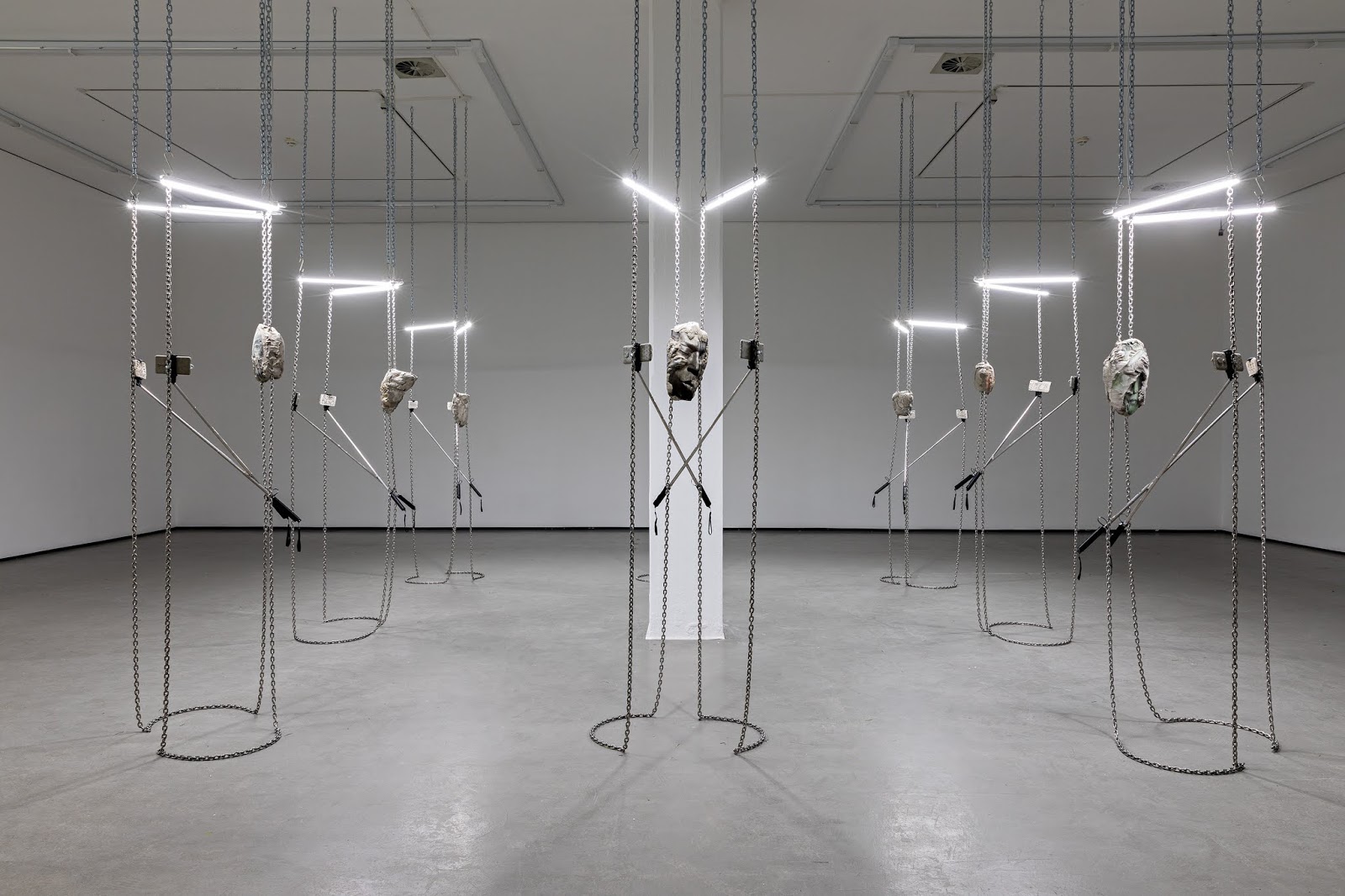 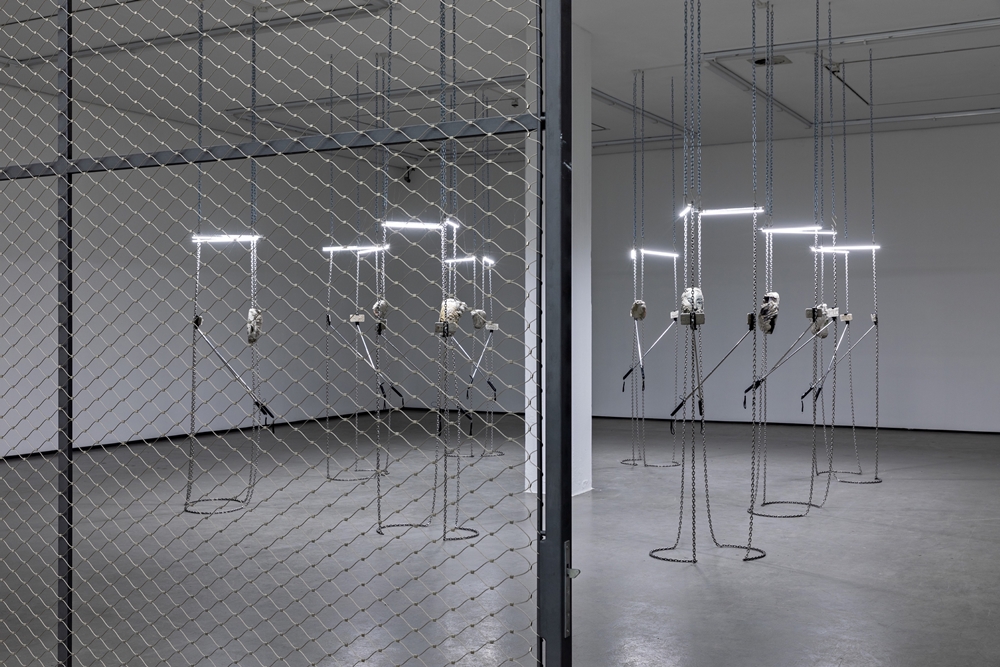 The examination of gesture plays a central role in Matheus Rocha Pitta’s works. As articulations of the body and language, gestures have far-reaching ethical and political implications. Over many years, Rocha Pitta has amassed an extensive archive of news clippings organized by quotidian gestural expression and place of origin. He arranges the material in multi-layered compositions on poured concrete slabs of different sizes and shapes. With his “petrified” collages, Rocha Pitta constructs stories, memories, and scenarios that reflect authoritarianism, misinformation, and injustice.

For his show in Hamburg, The Curfew Sirens, Rocha Pitta has developed a group of eight new sculptures called Sirens. The show’s title is already a play on the multiple semantic levels involved in the works. Literally, it is an alarm announcing the start of a curfew. “Curfew” is borrowed from old French and means “to cover” as well as “fire,” referring historically to a protective plate for putting out fire. Only gradually did the meaning of the word change from a protective to an authoritarian connotation. In medieval England, the so-called "curfew bell" was used to ring the bell at night to remind people to cover the embers in their homes to prevent fires. The siren itself is not only an alarm sound but also a mythical creature from ancient Greece, which attracts sailors passing by with its beguiling singing and plunges them into ruin. With the word combination The Curfew Siren, Rocha Pitta adds attributes to his sirens that alternate between state control and protective gesture.

This continues also in the sculptures with the heads of the Sirens showing gestures of closed mouths, ears, and eyes, which open up a multitude of points of reference. The artist plays, for example, with the three wise monkeys of a Japanese proverb, which would mainly be recognized today as emoticons used in text messages. In the West, the monkeys covering their mouths, ears, and eyes are primarily connected to the idea of not wanting to recognize something evil. In their original meaning, however, they stand for morality and humanity.

The title of the works and especially the covered ears is a reference to Odysseus’ encounter with the eponymous chimera. According to Homer's legend, curiosity drove him to listen to their captivating but fatal promise of omniscience. He could only resist the urge to dock and thus leading his crew and himself inevitably into disaster by having himself tied to the ship's mast. Analogous to this, Rocha Pitta's Sirens are placed around the central pillar in the exhibition space, but turn away from it and towards the visitor. Therefore it remains unclear who is resisting whom in this arrangement.

The artist likewise considers the selected gestures in relation to the urge for constant expression of opinion and streaming from social media and an increasing surveillance mentality. Each Siren is holding two selfie sticks with stone cell phones on whose screens, in contradiction to the gestures on display, can be read “Hear Something!,” “See Something!,” and “Say Something!” An ambivalent action-reaction loop is thus developed within the work and with the audience, as it remains questionable who is being challenged to hear, see, and speak.

In his works, Rocha Pitta purses the question of possibly short-circuiting the multi-level chain of power and language, the right of free speech, hate posting, and authoritarian control. Especially with its observations of how violence is increasingly being used to strengthen public discourse, the show searches for a moment of pause and balance.

Matheus Rocha Pitta asks the questions of who has the right and power to speak and what authority can withdraw it. Especially with its observations of how violence is increasingly being used to strengthen public discourse, the show searches for a moment of pause and balance. Its Sirens are profoundly human representatives who seem trapped between resistance and resignation.

Matheus Rocha Pitta (Tiradentes, Brazil, 1980, lives and works in Berlin and Rio de Janeiro) studied history and philosophy at the Universidade Federal Fluminense, Niteról, and the University of the State of Rio de Janeiro in Rio de Janeiro. His work has been presented internationally in solo and group exhibitions, including at Auroras and Casa do Sertanista, São Paulo (2019, 2018), Museu de Arte Moderna and Athena Contemporânea in Rio de Janeiro (2018, 2017), Künstlerhaus Bethanien, Berlin (2017), where he was also a grantee of the KfW Stiftung from 2016 to 2017, Brazilian Embassy in London (2016) and also Palais de Toyko, Paris (2013). He is represented in the collections of the Castelo de Rivoli, Turin, and the Museu de Arte Moderna in Bahia, Rio de Janeiro, and São Paulo, among others.

The exhibition is kindly supported by the Ministry of Culture and Media of the Free and Hanseatic City of Hamburg, the Berit und Rainer Baumgarten Stiftungsfonds under the umbrella of the Hamburgische Kulturstiftung, and the Honorary Consulate of the Federative Republic of Brazil in Hamburg. 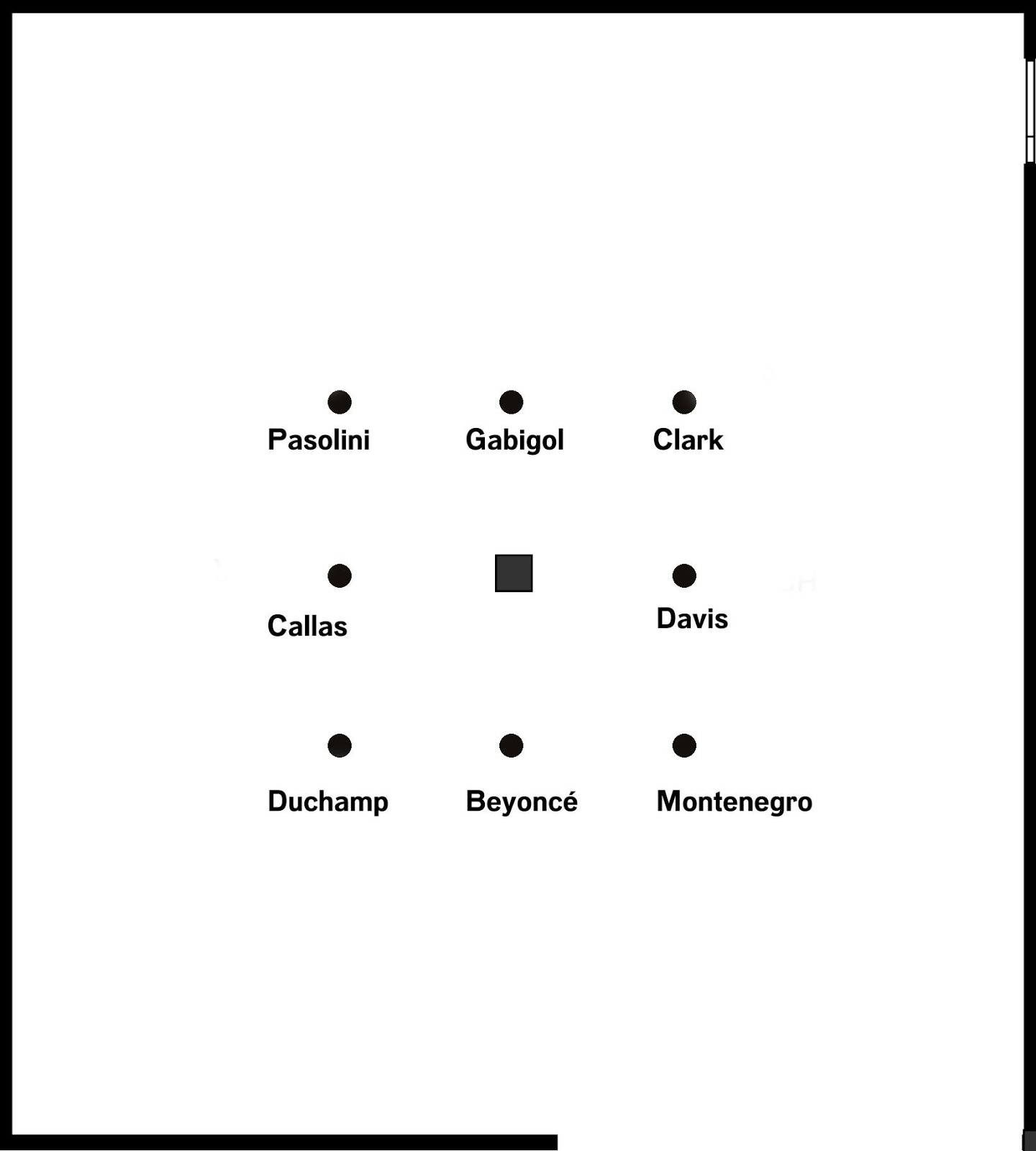 In 2018, Beyoncé became the first female BPoC (Black Person of Color) to headline the famous Coachella music festival. Her performance attracted a great deal of international attention, also and especially because she used it as a political platform to bring a decidedly black story center stage. The show quoted Malcolm X and Nina Simone as well as the Black Lives Matter movement or the berets of the Black Panthers. Queen Bey, as she is also called, posed during the performance as Queen Nefertiti in an outfit by Lebanese designer Nicolas Jebran. A portrait photo of the artist, inspired by the famous bust from the Neues Museum in Berlin, became a pop-cultural icon in this context. Nefertiti herself was an extraordinarily powerful woman in Egypt in the 14th century B.C. who was at least symbolically endowed with pharaonic power - some scientists even assume that she was a dominant co-regent.

Gabigol, born 1996 (The Second Siren aka the Mascot Siren)

Brazilian professional footballer who plays as a forward for legendary club Flamengo and the Brazil national team. Known for his technical skills, creativity, and use of tricks on the ball. In line with his flair and flamboyant playing style, he gracefully ignored Rio’s extreme right Governor Witzel opportunistic gesture, who knelt in front of him during the celebrations of Flamengo’s league title of Libertadores Cup 2019. Witzel was nicknamed Auschwitzel due to the significant increase of killed people by police violence under his mandate.

Gay, catholic and communist Italian writer, movie director, poet, and public intellectual. Also a prominent linguist and exhibitionist. Considered either hallucinatory or extremely transgressive, his positions remain controversial, not to say prophetic. Before being assassinated, under circumstances still unclear, he stated the consumption society is the full realization of fascist totalitarianism:  „One does not have to be strong to confront fascism in its ridiculous and crazy forms: one has to be even stronger to confront fascism as normality, as a, I would say, happy, mundane, socially elected codification of the brutally egotistical background of a society”.

The greatest Brazilian actress of all time also referred to as the great lady of Brazilian theater, cinema and performing arts.  In 2019 she was called “dirty” and “liar” by the theater director Roberto Alvim, who weeks later became Special Cultural Secretary of the Bolsonaro’s extreme right government. He was fired on 17 January 2020, after publishing a video paraphrasing excerpts from a speech by Joseph Goebbels.

“For me, it’s a question of producing a rite without mythology”, once stated the Brazilian artist who embraced a very particular and ambitious anti-retinal practice. She was one of the main figures of the Neo-Concrete movement, that cannibalized constructivist and Bauhaus aesthetics in favor of more organic and intuitive abstraction. From moveable sculptures to environmental installations, her work consistently and steadily became a set of coordinating gestures, or rituals, to be performed by participants and eventually became therapy. In her own words, she abandoned art. But that was just one renouncement in a series: she abandoned her bourgeoise family then her country, escaping the military dictatorship for a very precarious life in Paris, where she taught at the Sorbonne.

French artist, chess player, librarian, art dealer, occasional cross-dresser and anti-artist who broke down the boundaries between works of art and everyday objects with the invention of the ready-made. Duchamp’s gesture was the radical reduction of the creative act to a neutral choice: the artist is the one that chooses instead of making. However, Duchamp himself created mirrors, ghosts, and doubles that would complicate any straightforward reading of his work. Of the personae created by Duchamp, Rrose Sélavy (sounding like Eros c’est la vie) is by far the most important. She signed some artworks and was famously photographed by Man Ray in 1922.  The last words of the artist are engraved in his epitaph: “Anyway, it’s always the others who die.”

American jazz trumpeter, bandleader, and composer Miles Davis played a crucial and inevitably controversial role in every major development in jazz since the mid-1940s. No other jazz musician has had so profound an effect on rock. He was the most widely y recognized jazz musician of his era, an outspoken social critic and an arbiter of style—in attitude and fashion—as well as music. Miles Davis' artistic interest was in the creation and manipulation of ritual space, in which gestures could be endowed with symbolic power sufficient to form a musical vocabulary. Among his famous records are Kind of Blue, Bitches Brew, and Nefertiti. A man of excess, Davis had very fragile health. At the age of 29, he went on surgery to remove polyps from his larynx. The doctors advised him to remain silent after the operation. But, like Orpheus gazing for the last time at his beloved Eurydice, he got into an argument that permanently damaged his vocal cords and gave him a raspy voice for the rest of his life.  He was called than Prince of Darkness, adding another patina of mystery to his persona.

The most renowned and influential opera singer of the 20th century. Her musical and dramatic talents led to her being hailed as  La Divina. But she wasn’t born a goddess, on the contrary. Callas faced a poor childhood and by the time her career started, she was ridiculed for her overweight. Her voice wasn’t either perfect, as the Italian critic Rodolfo Celletti stated: "The timbre of Callas's voice, considered purely as sound, was essentially ugly: it was a thick sound, which gave the impression of dryness, of aridity. It lacked those elements which, in a singer's jargon, are described as velvet and varnish... yet I really believe that part of her appeal was precisely due to this fact. Why? Because for all its natural lack this voice could acquire such distinctive colors and timbres as to be unforgettable”. Callas was also considered a great actress, a complete artist.  One move of her hand was more than another artist could do in a whole act. She said there was no secret:  “When one wants to find a gesture all you have to do is listen to the music. If you take the trouble to really listen with your soul and with your ears—and I say 'soul' and 'ears' because the Mind must work, but not  too  much also—you will find every gesture there.”
Tags kunstverein hamburg, Lazy exhibitions, matheus rocha pitta
Newer Post Older Post Home