Evelyn Taocheng Wang
Als ich sie entlang des Flusses suchte, stand sie mitten im Wasser
(When I sought her along the river, she stood in the middle of the water) 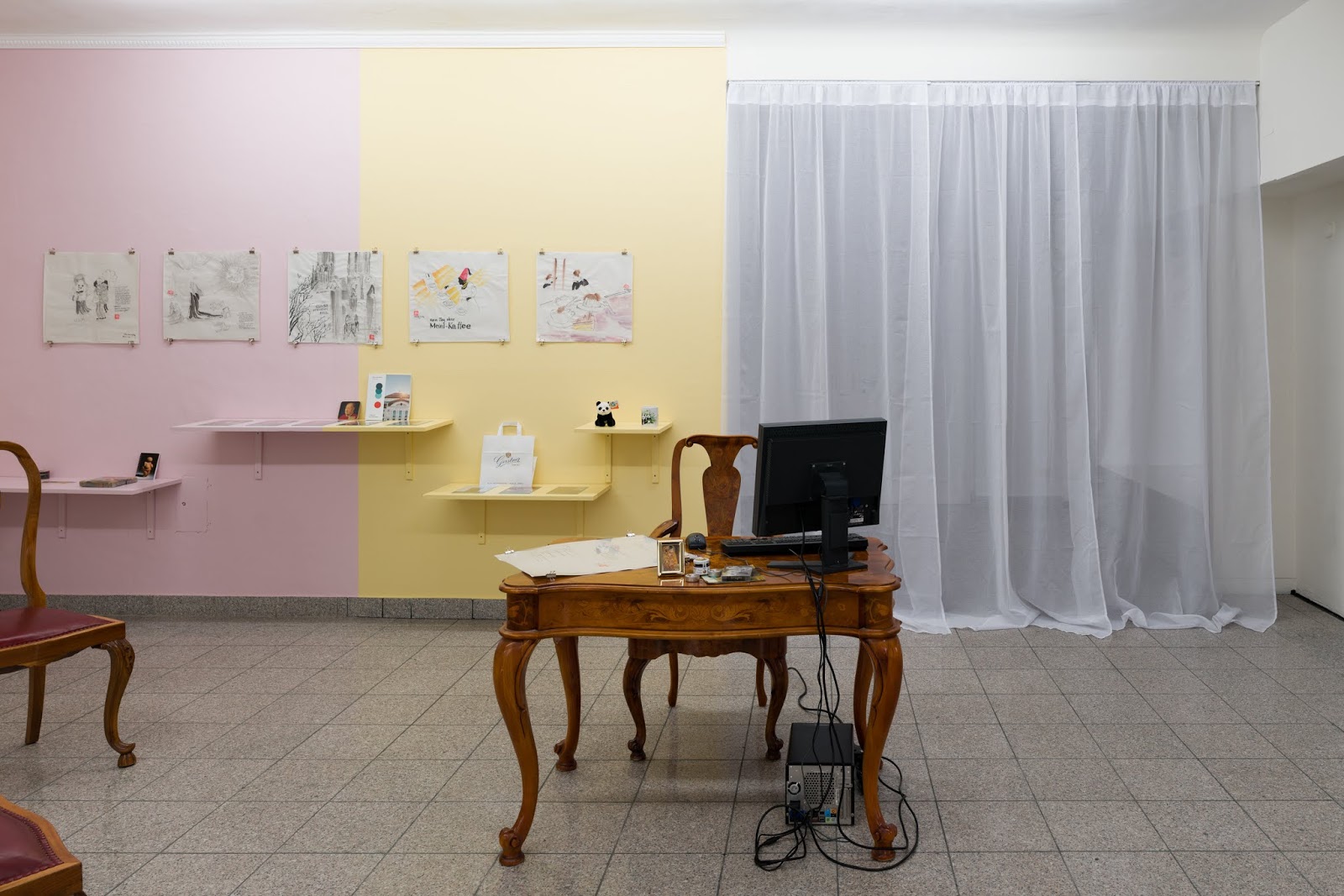 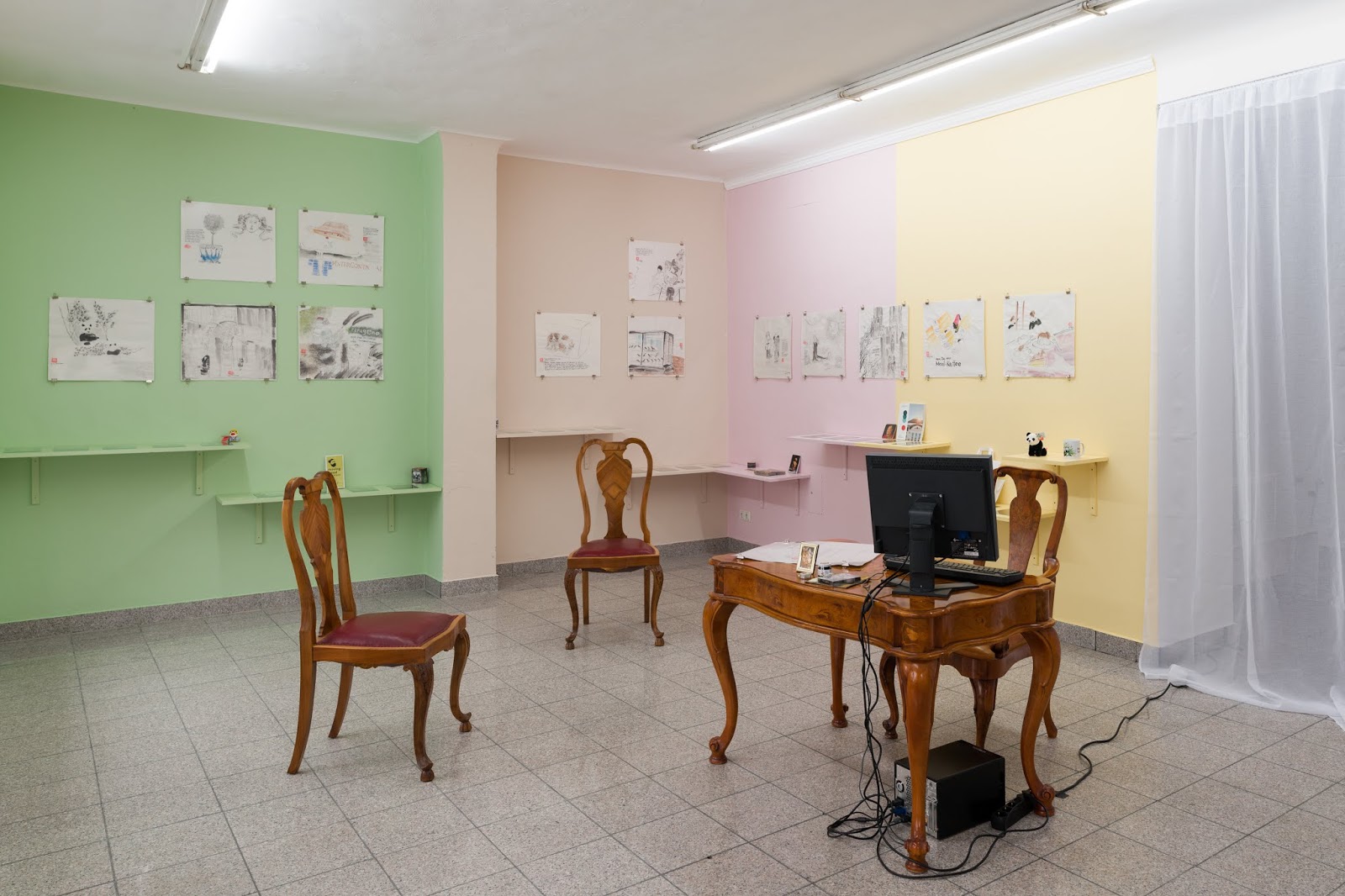 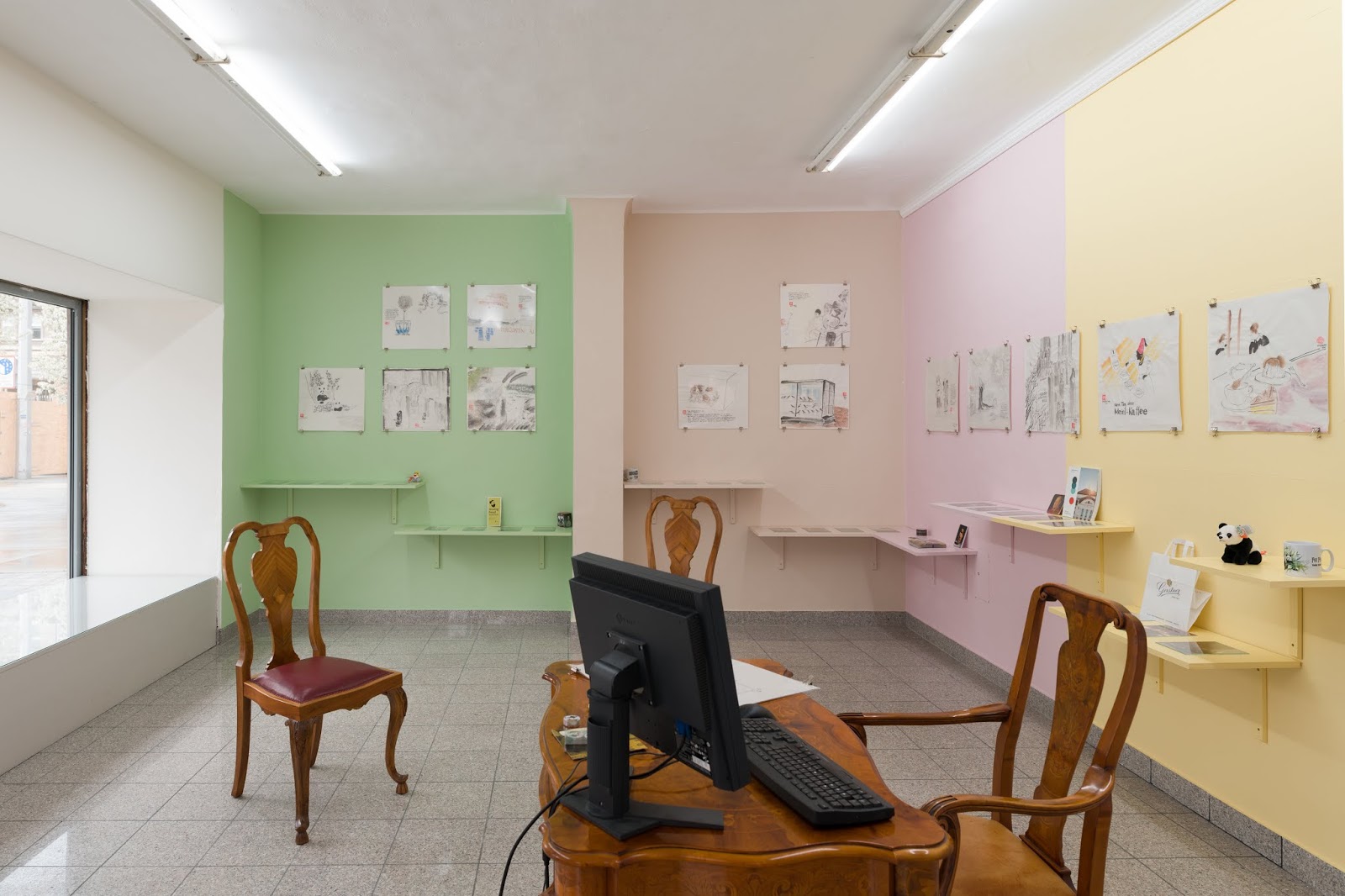 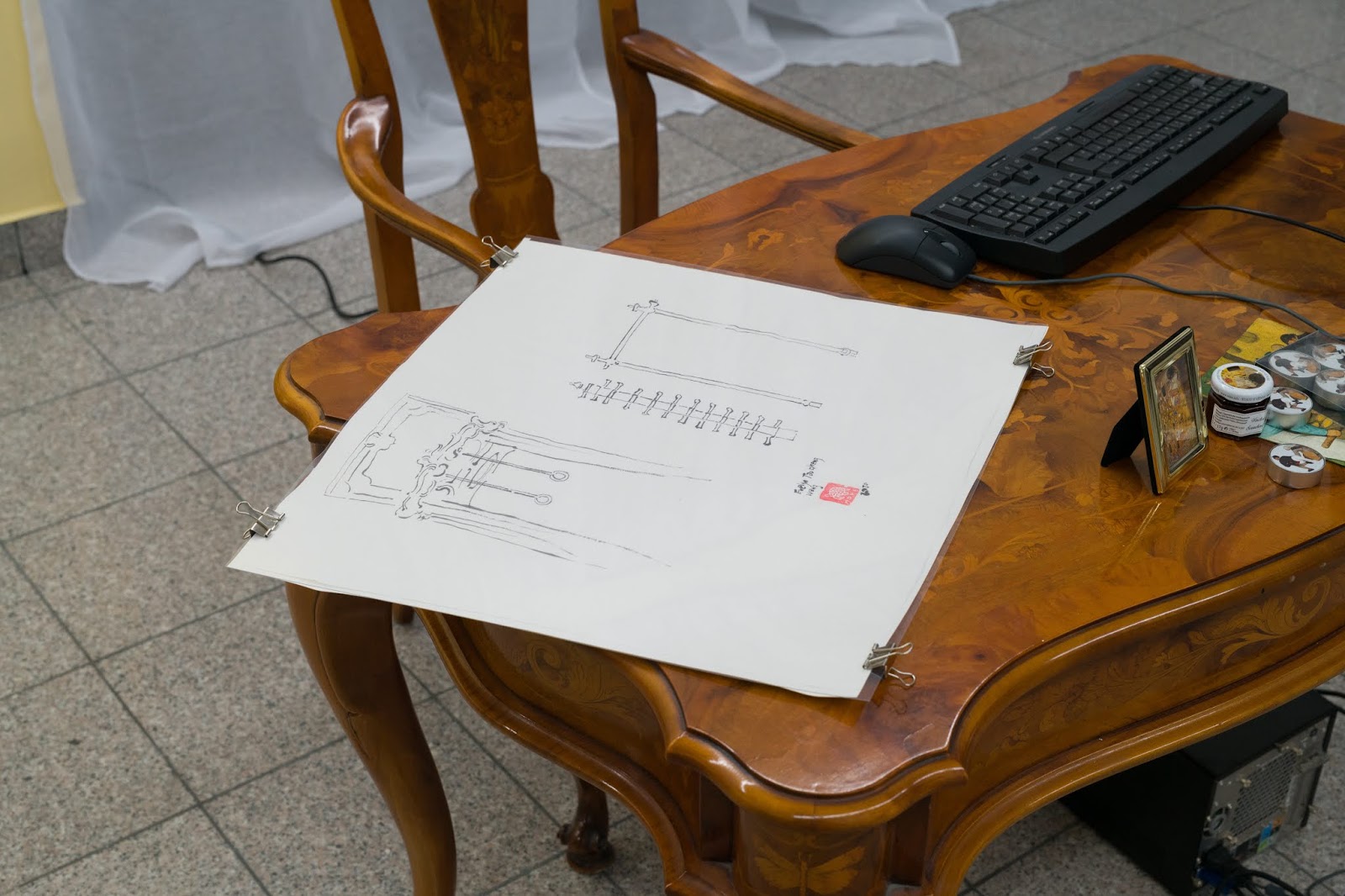 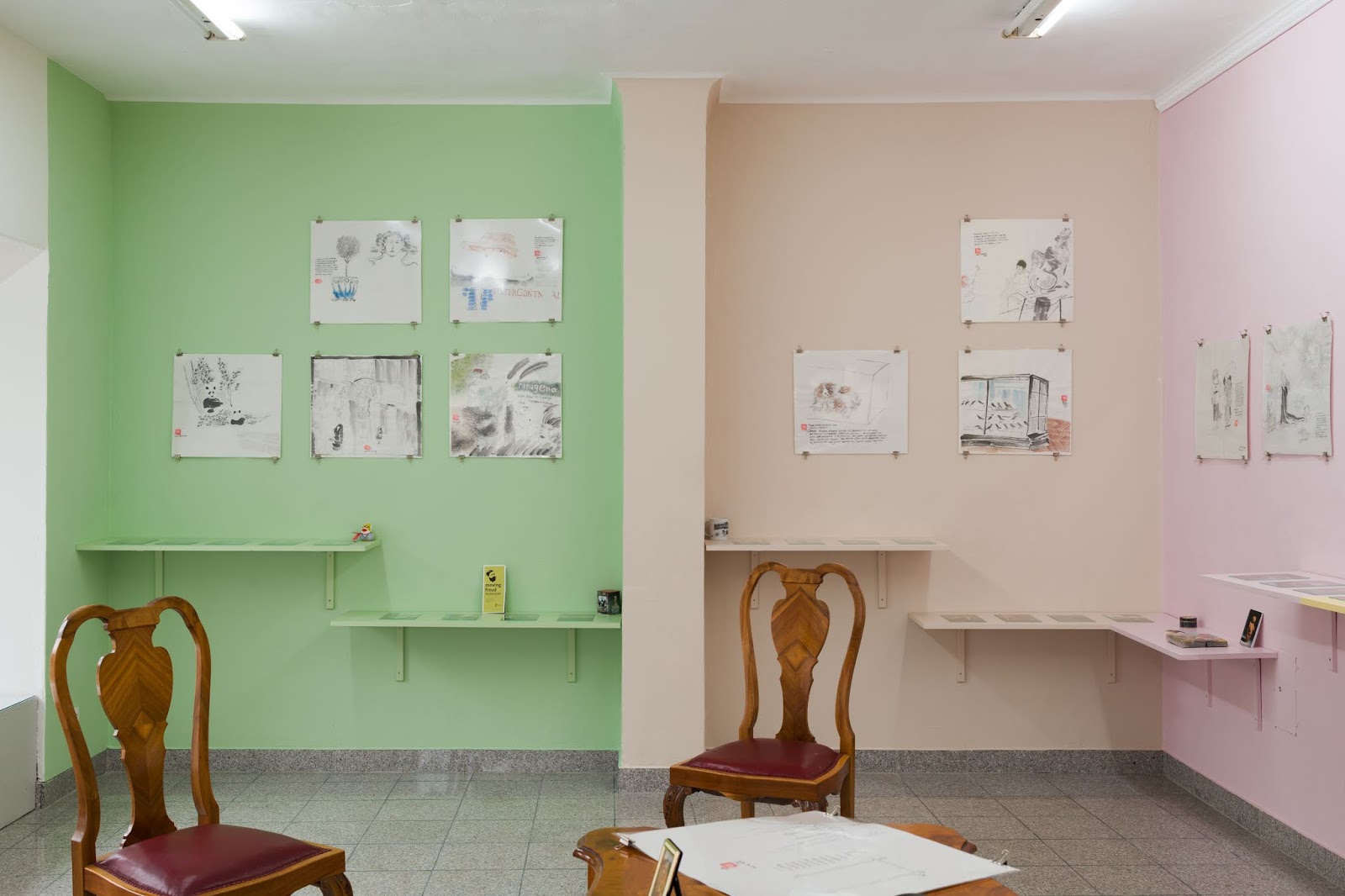 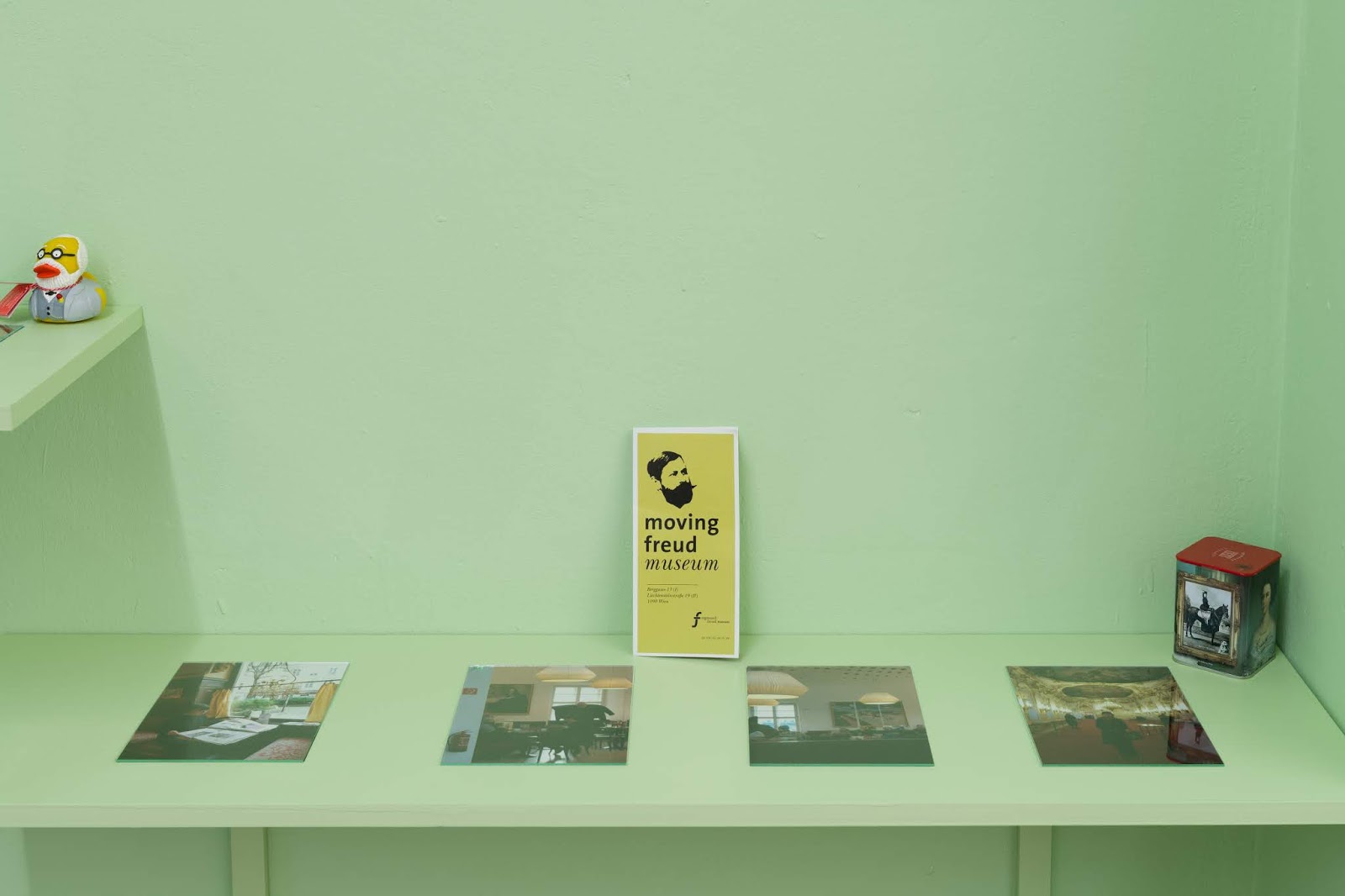 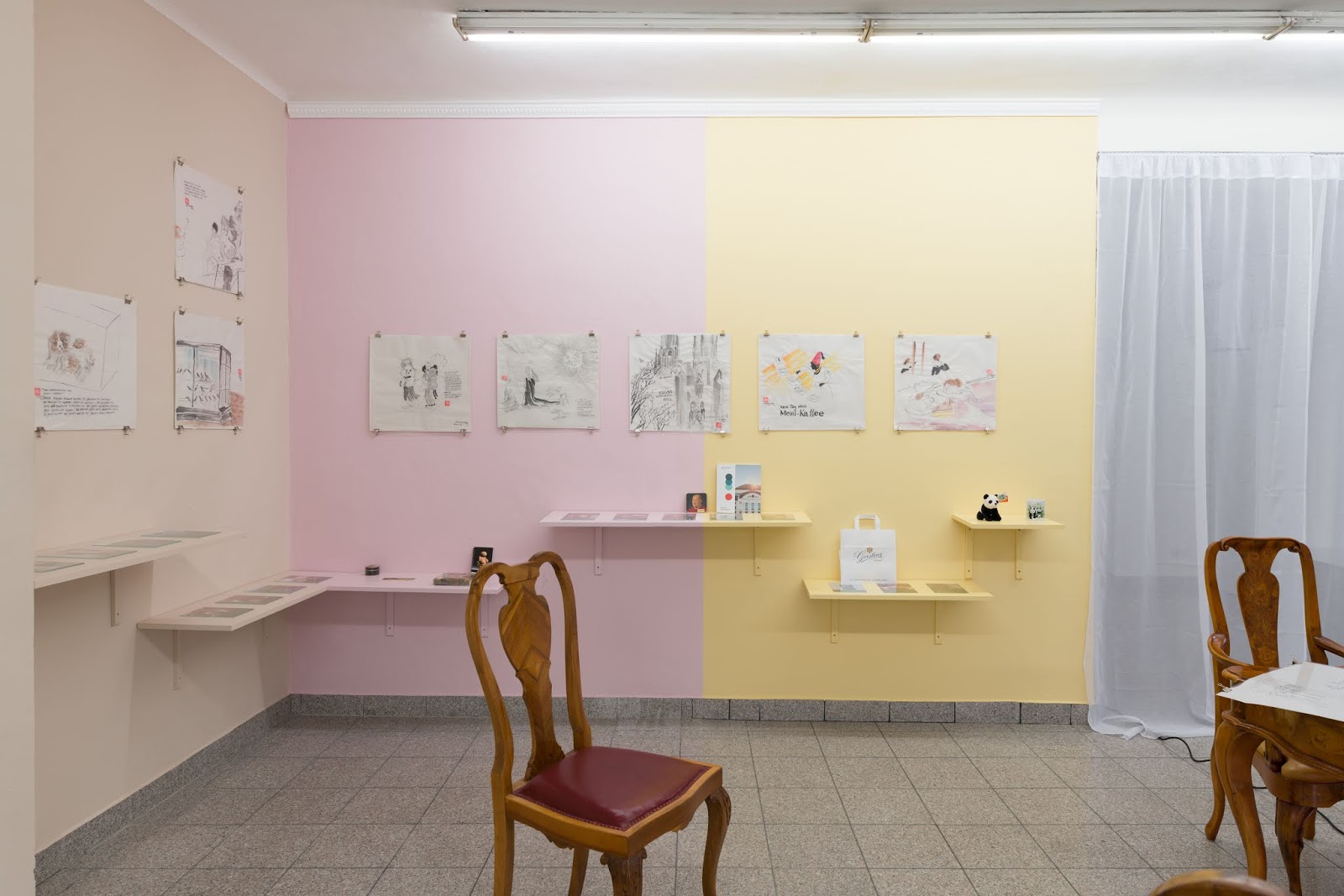 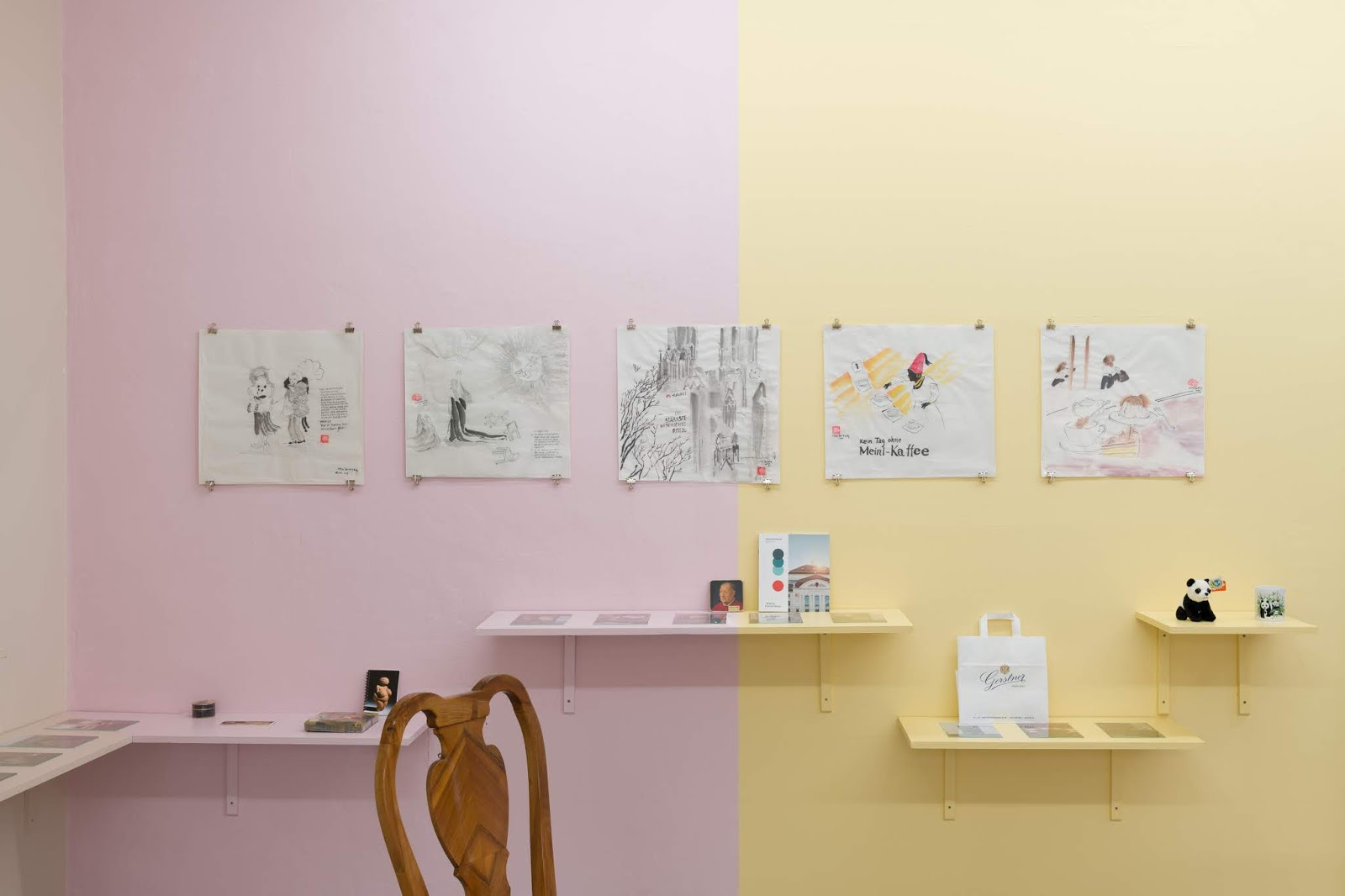 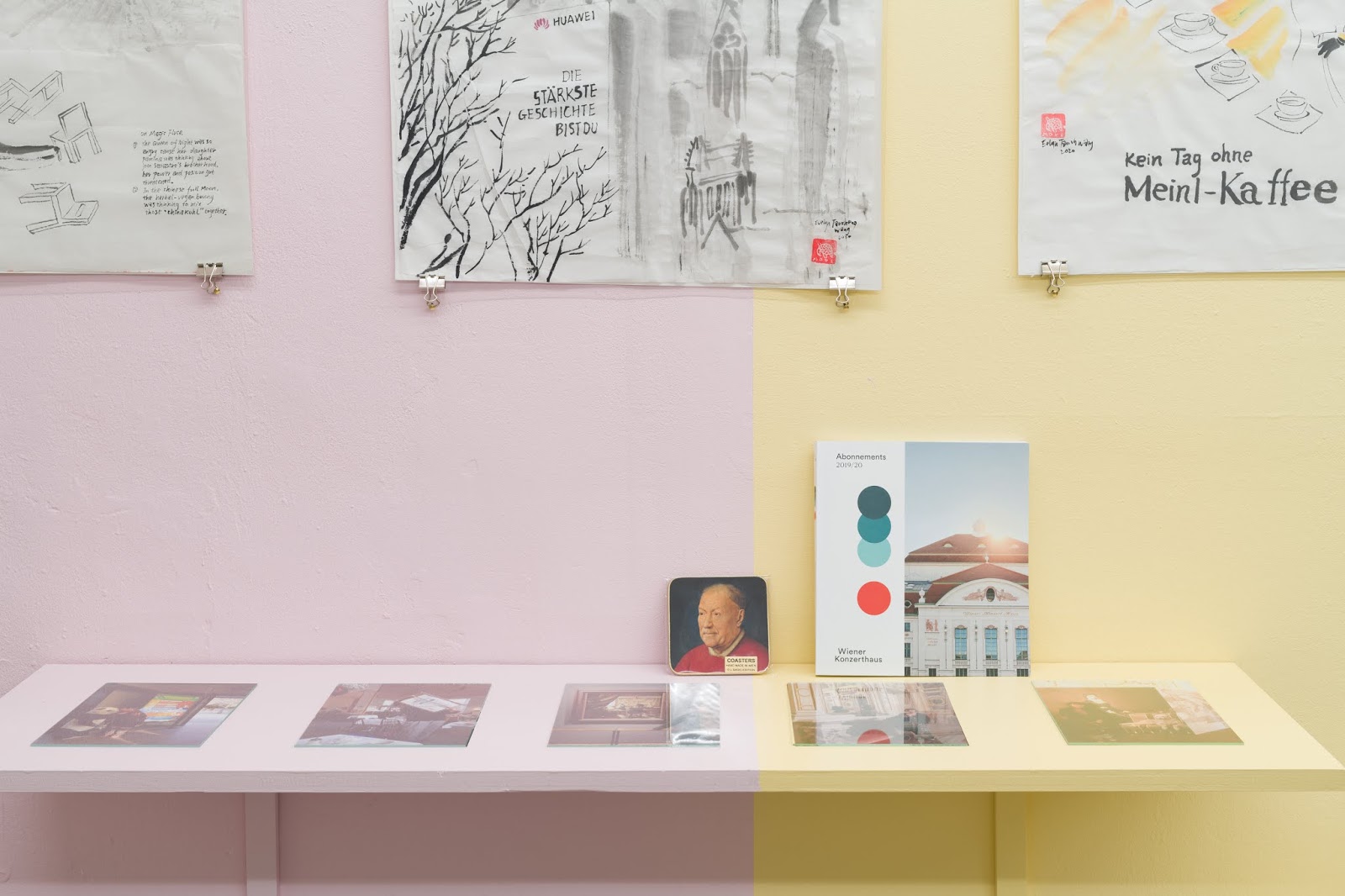 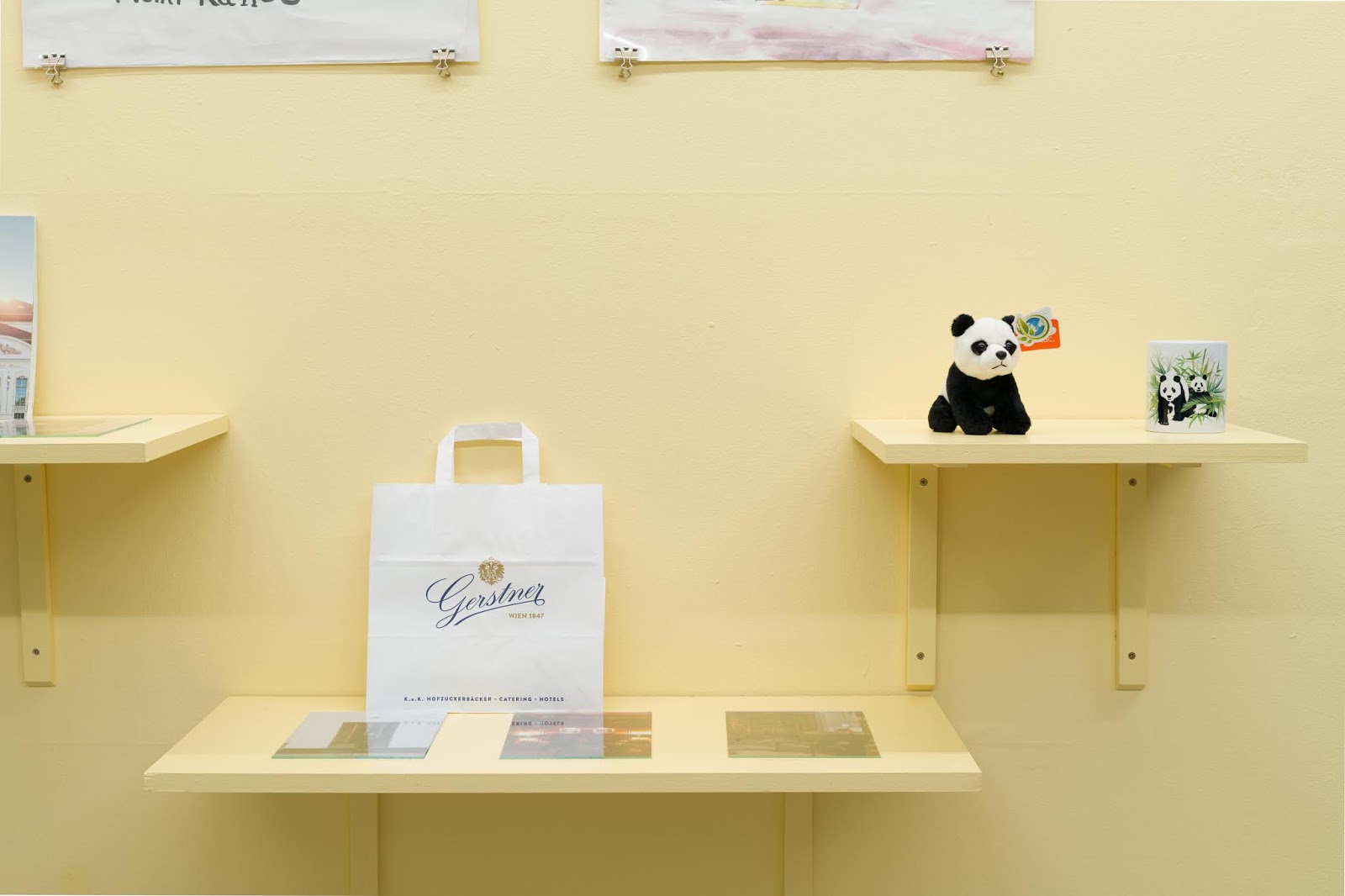 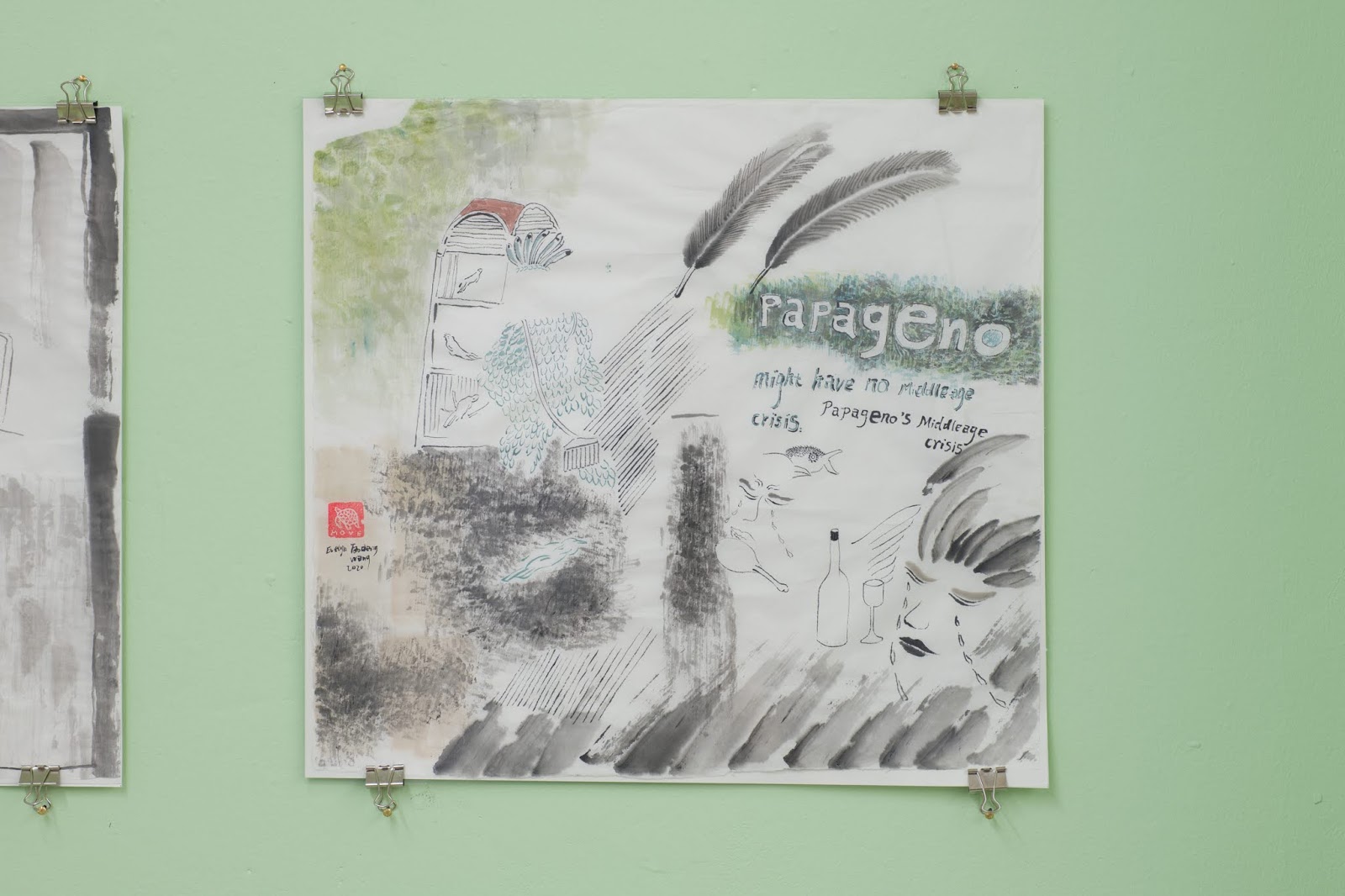 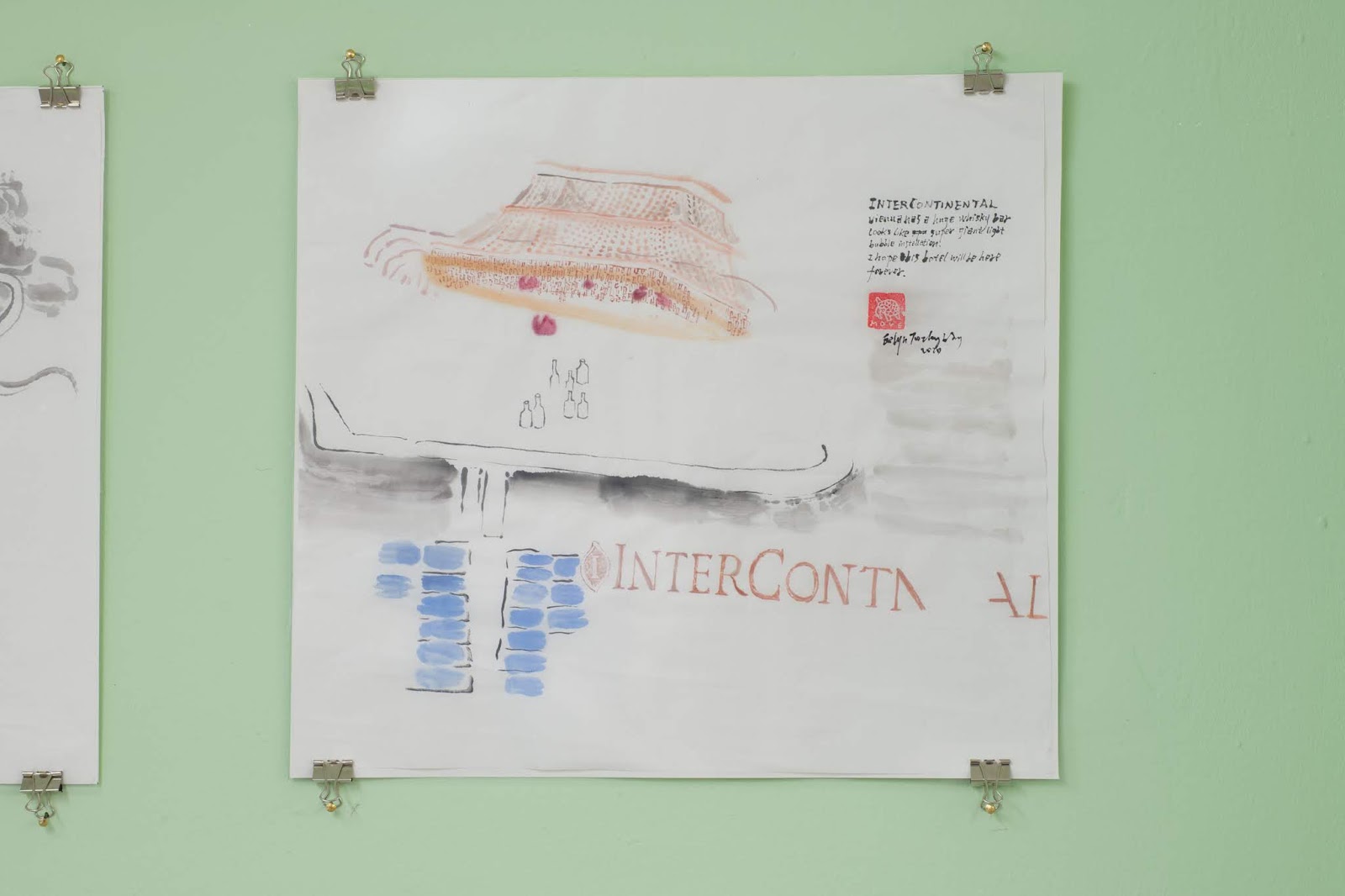 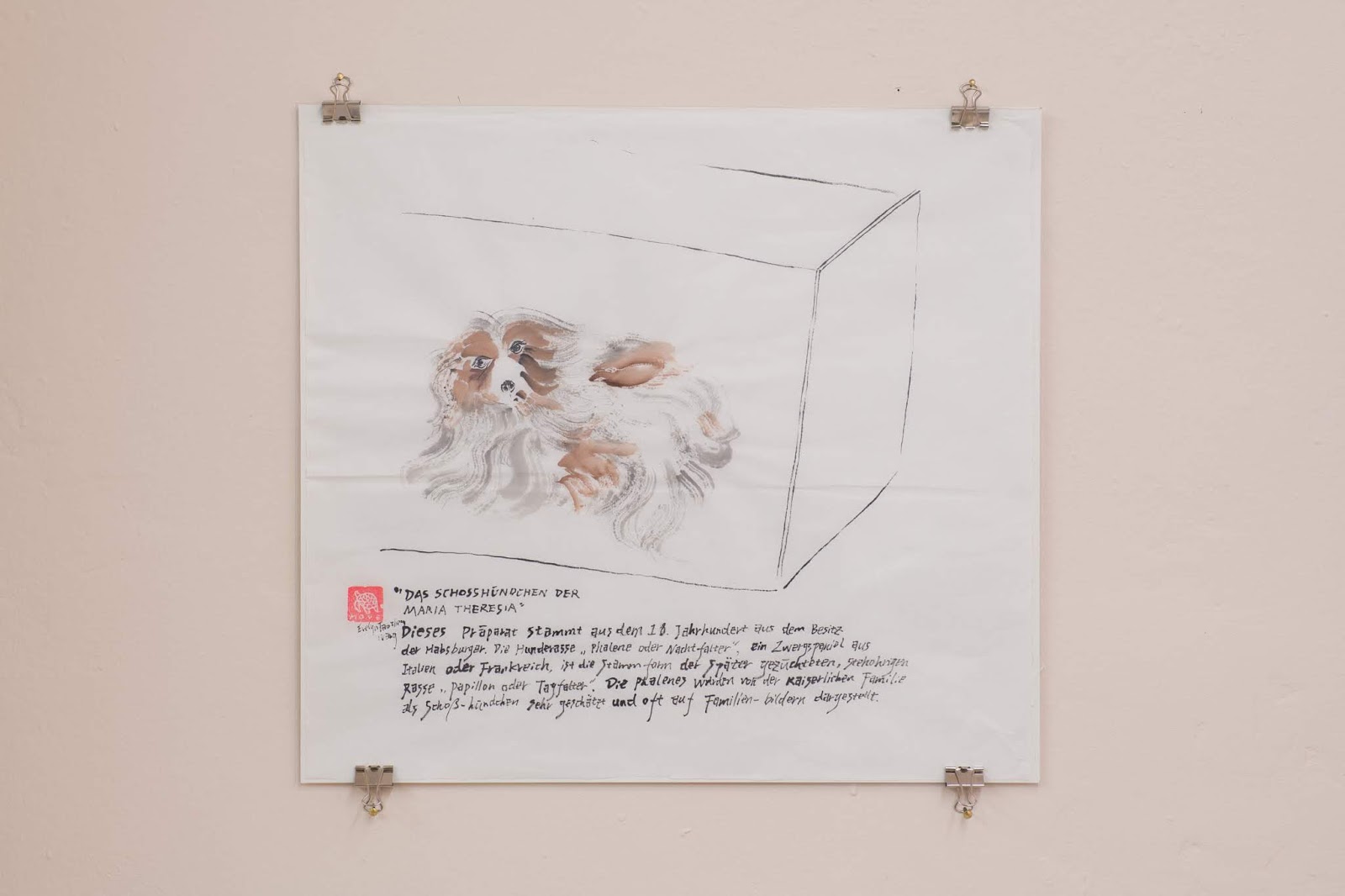 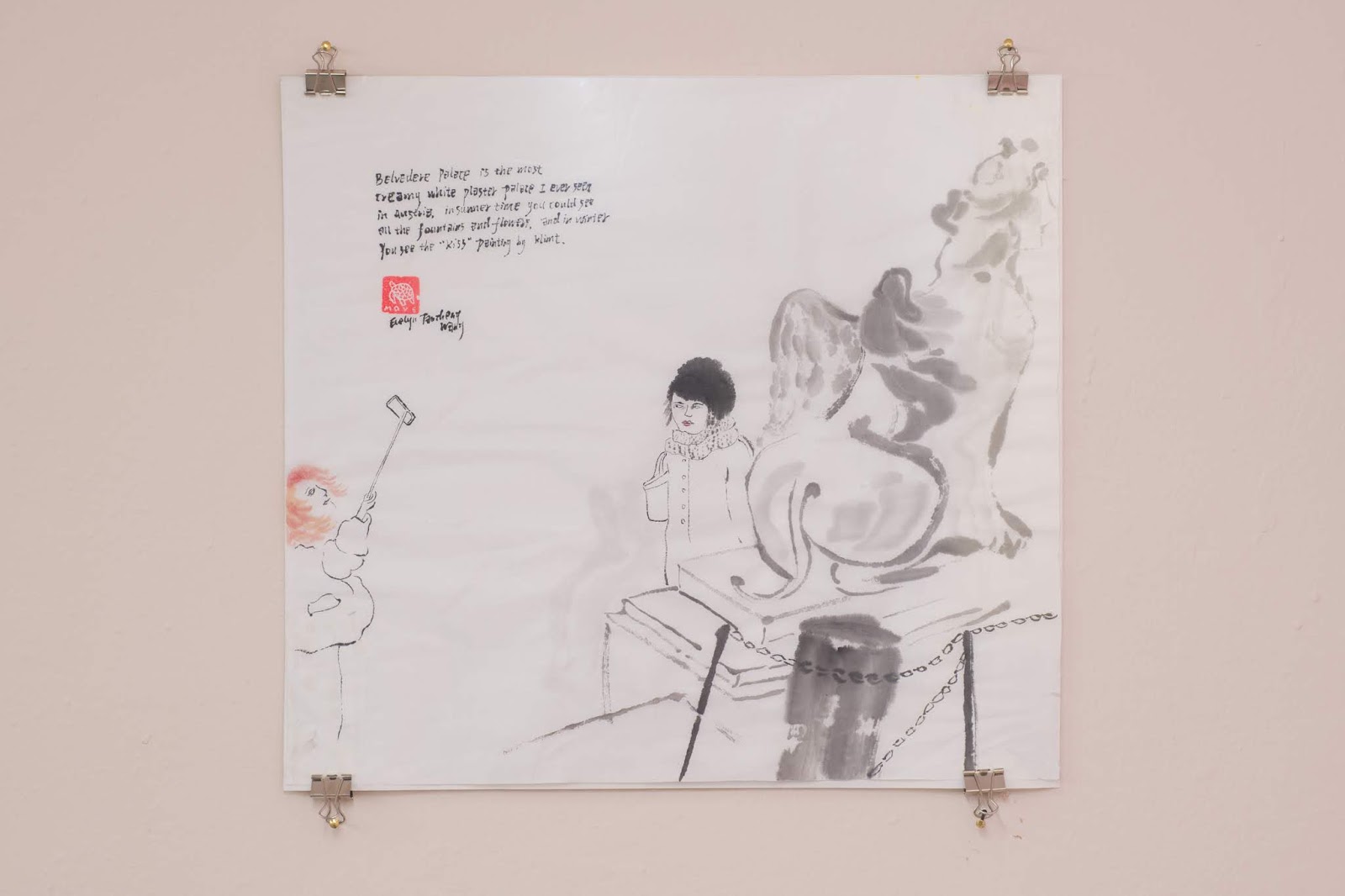 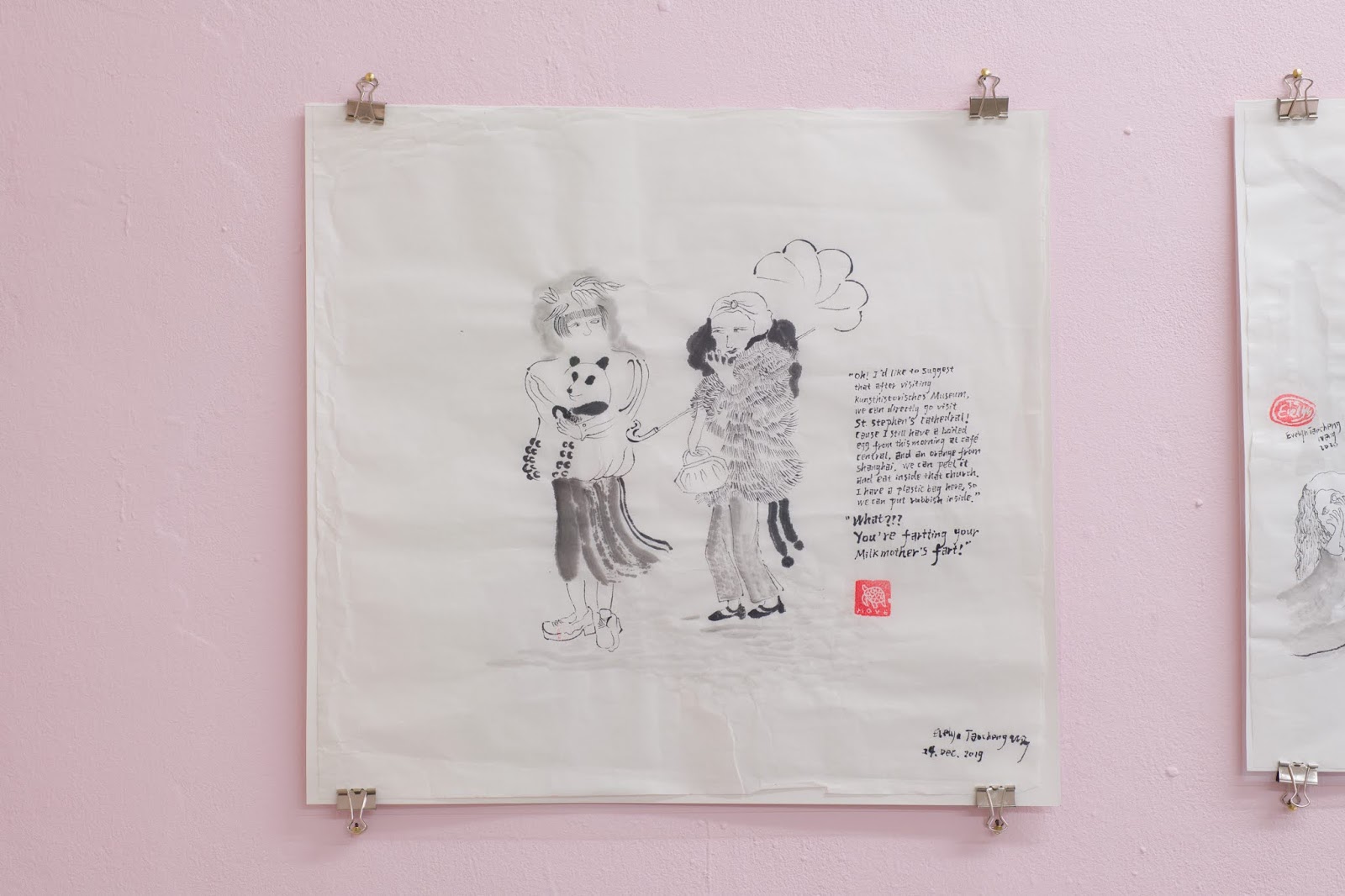 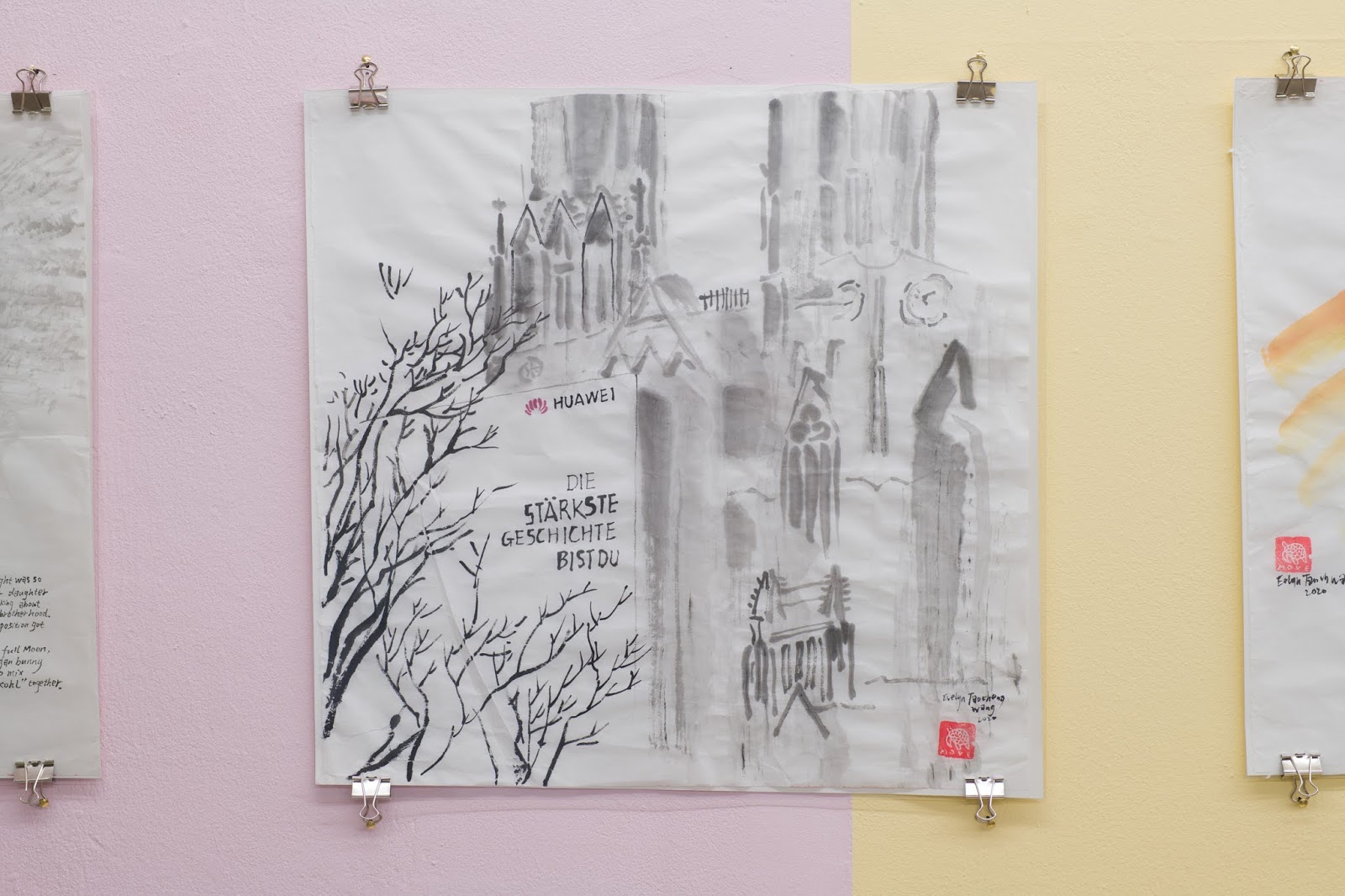 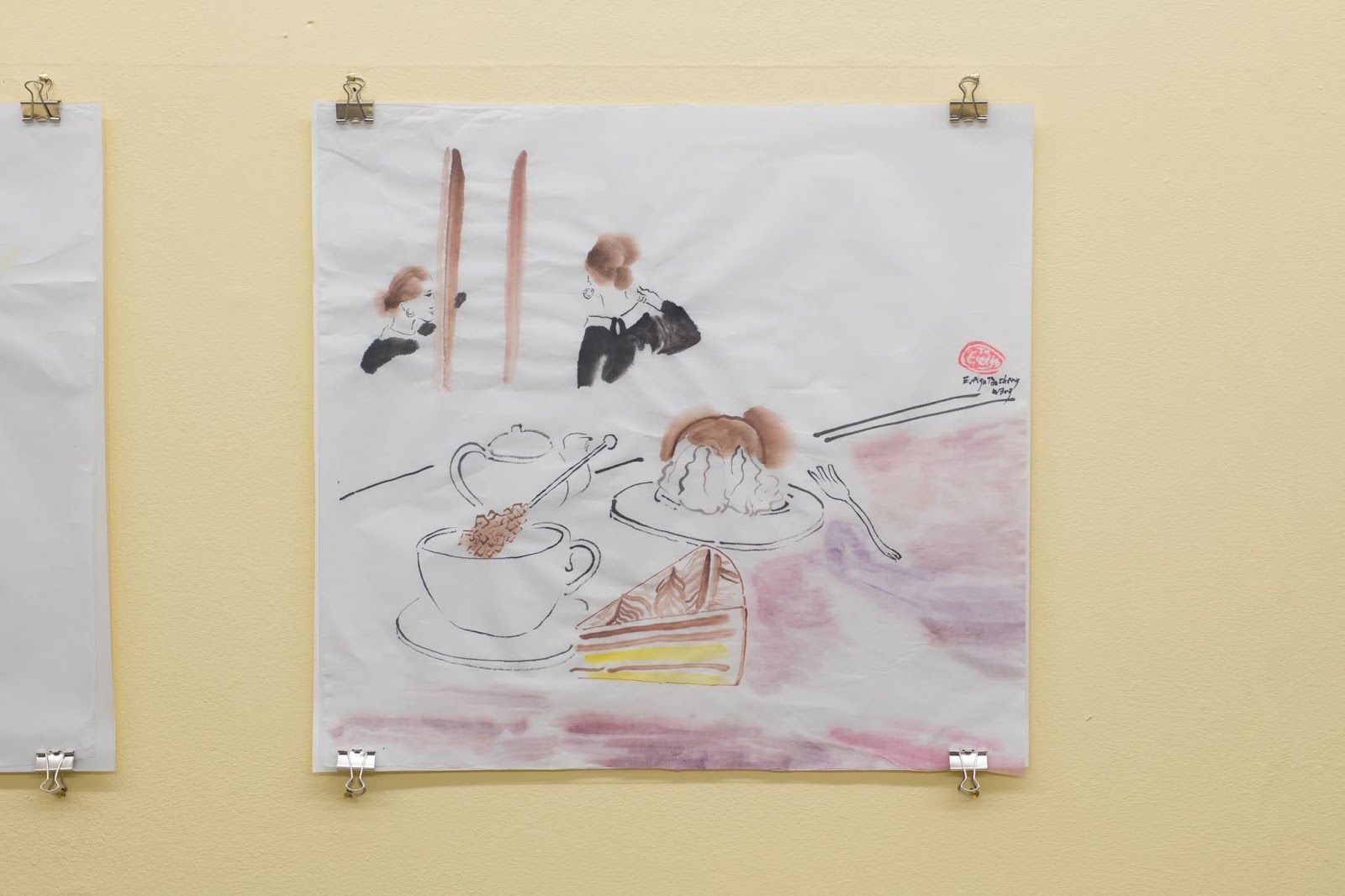 Evelyn Taocheng Wang’s artistic practice emerges from an interest in what constitutes identity and culture, and how one’s own body is culturally relative to—and intertwined with—autobiographical structures. Initially trained in classical Chinese painting, Wang’s research is based on different (art) histories, feeding from perceived concepts of East and West, and offers fragmented, diary-like views of embodied personal, and external fantasies and desires.

For her first solo exhibition in Austria, the artist shifts her focus onto the fantasies, prejudices, and stereotypes of Chinese tourists in Vienna that is suggested as the epitome of European culture and civilization. Sourcing from a research trip to the Austrian capital in December 2019 and the artist’s memories of Vienna-tourism commercials broadcast in Chinese state television during the economic reform in the 1980s, Wang investigates—through performance, drawing, text and photography—the city’s imperial past and decadence, tourist attractions, and cultural institutions.

The exhibition borrows its title from a passage of one of the poems of the Shijing (Classic of Poetry), the oldest existing collection of Chinese poetry spanning from the 11th to 7th centuries BC. The poem Jian Jia (Reed) follows the author on his quest of a woman (or, as sometimes suggested: his self) through different landscapes, rivers and abstract forms, leaving the reader uncertain about who the sought person in the poem might be, thus opening up the notion of identity as a moving concept.

Staged as a fictional “tourist office” with opulent neo-baroque furniture and fake stucco, the exhibition consists of a new series of rice paper paintings, produced in immediate reaction to the tourist attractions visited in Vienna, amongst them the Vienna State Opera, the Musikverein and Konzerthaus, the Kunsthistorisches Museum, the National Library, Christmas Markets, the Giant Pandas at the Tiergarten Schönbrunn (Vienna Zoo) as well as Café Demel and its famous cake store. Presented alongside the paintings, a selection of souvenirs and photographs taken from the artist during her site visit emphasize the performative nature of her practice, transforming the installation into a diary-like photo documentation of her performative sightseeing tour.

Though seemingly arbitrary in their nature, Wang’s witty observations and motives of her paintings bear witness to the artist’s deeply personal entanglement between cultures. While images of coffee and cake, fragments of architecture, or scenes from the Vienna State Opera reveal a genuine longing for an imagined old Europe, the viewer is likewise confronted with the controversial logo of the Austrian coffee brand “Meinl” or the image of two Giant Pandas from the imperial zoo in Schönbrunn, mirroring the ambiguity of Austria’s cultural heritage and beauty. By projecting her very own fantasies onto the city, Wang reverses the stereotypes and prejudices about Chinese tourists in Europe, and challenges ostensibly fixed notions of Europeanness and exoticism, belonging and cultural identity — and, thus, continues the trajectory that lies at the core of her practice: the idea that the body is culturally relative, and that what it signifies, continuously shifts according to time and place.
Evelyn Taocheng Wang (*1981, Chengdu) lives and works in Rotterdam. She studied classical painting in China, continued her education at the Städelschule, Frankfurt and was resident artist at De Ateliers, Amsterdam (2012-2014). Solo exhibitions and performances have been presented at FRAC Champagne-Ardenne, Reims; S.M.A.K., Ghent; KW Berlin; Carlos Ishikawa, London; Chateau Shatto, Los Angeles; Tale of a Tub, Rotterdam; Stedelijk Museum Amsterdam, a.o. Group exhibitions include the documenta 14 Public Programs, Kassel; ICA, London; Manifesta 11, Zurich; The Kitchen, New York; De Hallen Haarlem; The 9th Shanghai Biennale, Shanghai; Galerie Fons Welters, Amsterdam. Wang's work is part of the collections of the Art Institute of Chicago, USA; Bonnefanten Museum, Maastricht; Centre Pompidou, Paris; Stedelijk Museum Amsterdam, a.o.