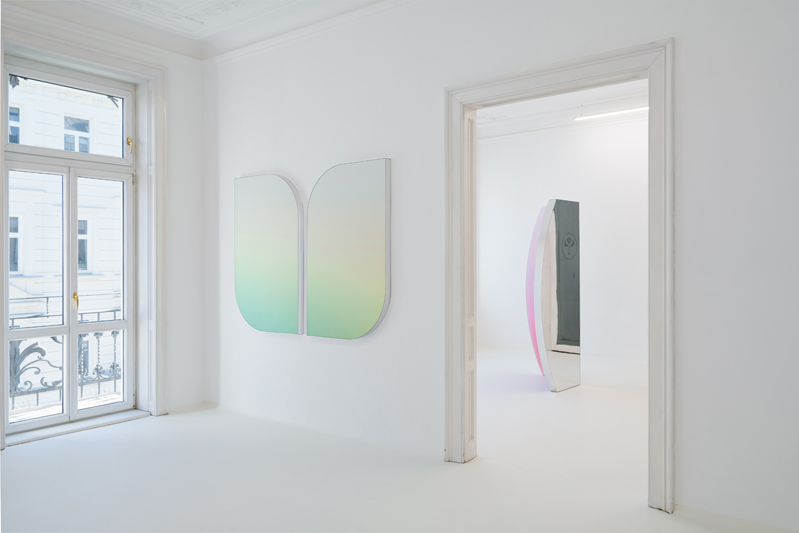 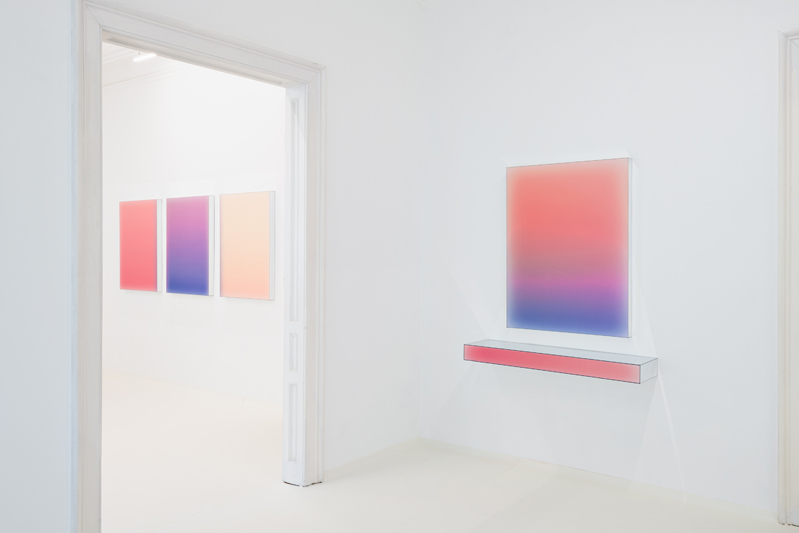 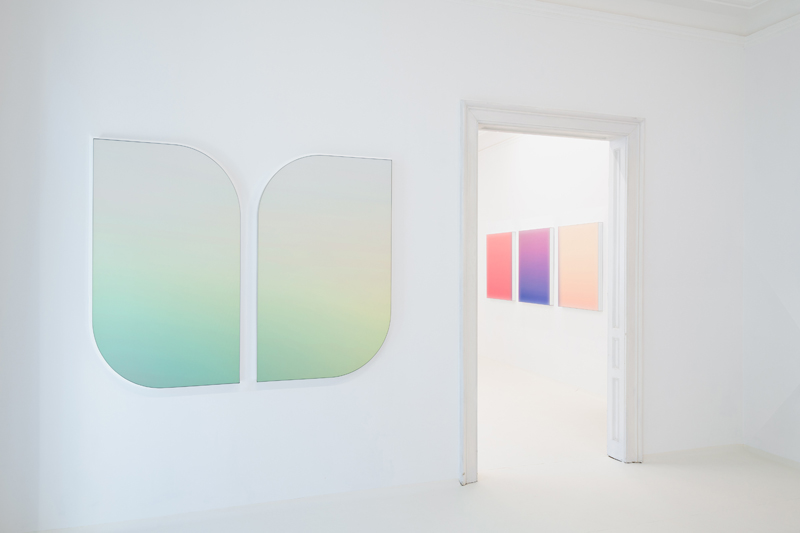 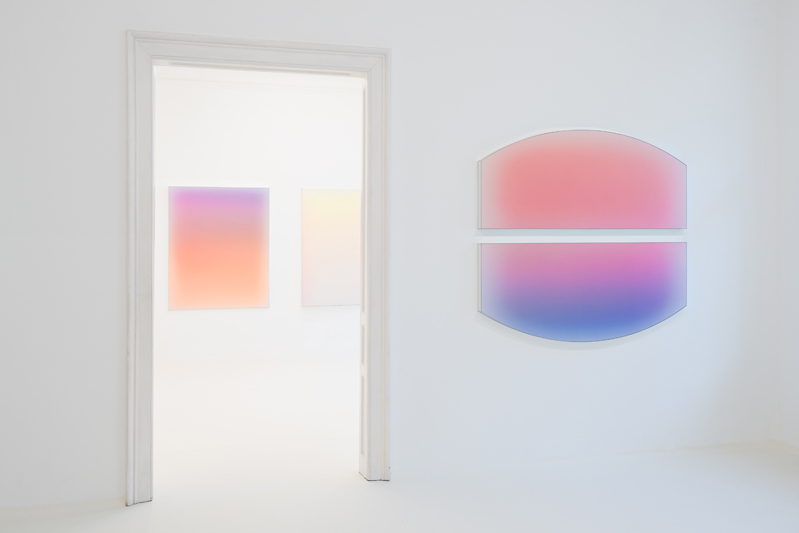 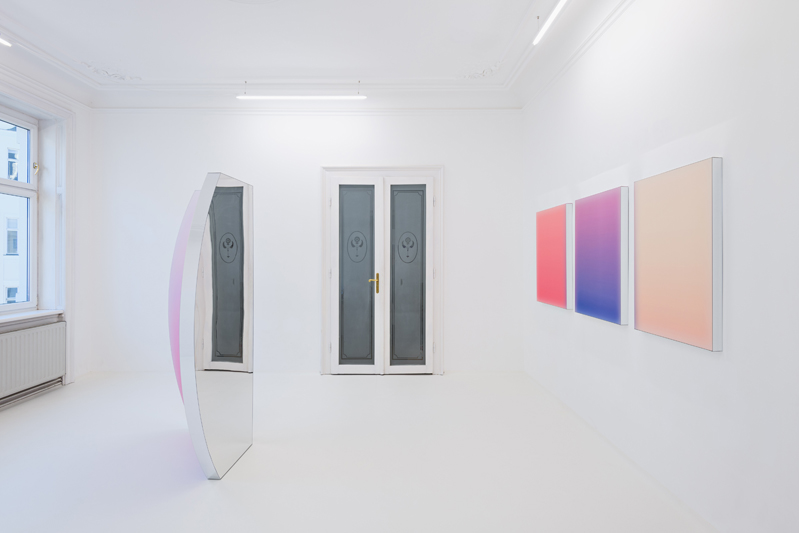 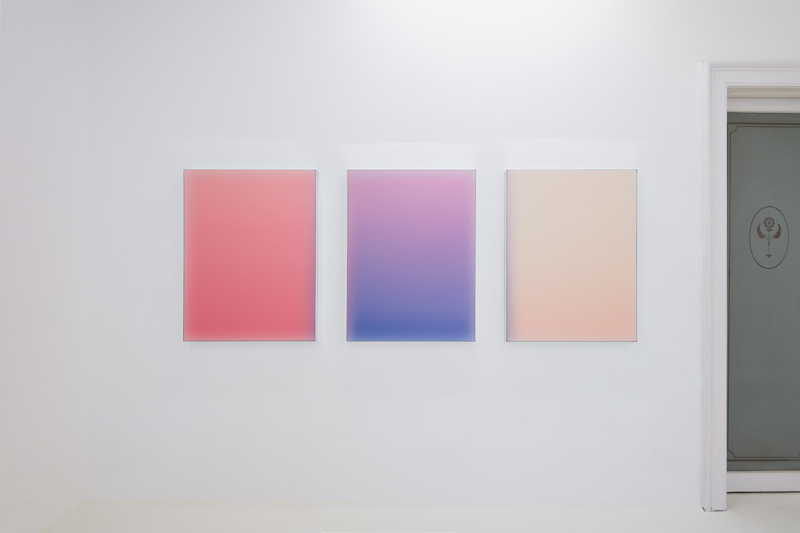 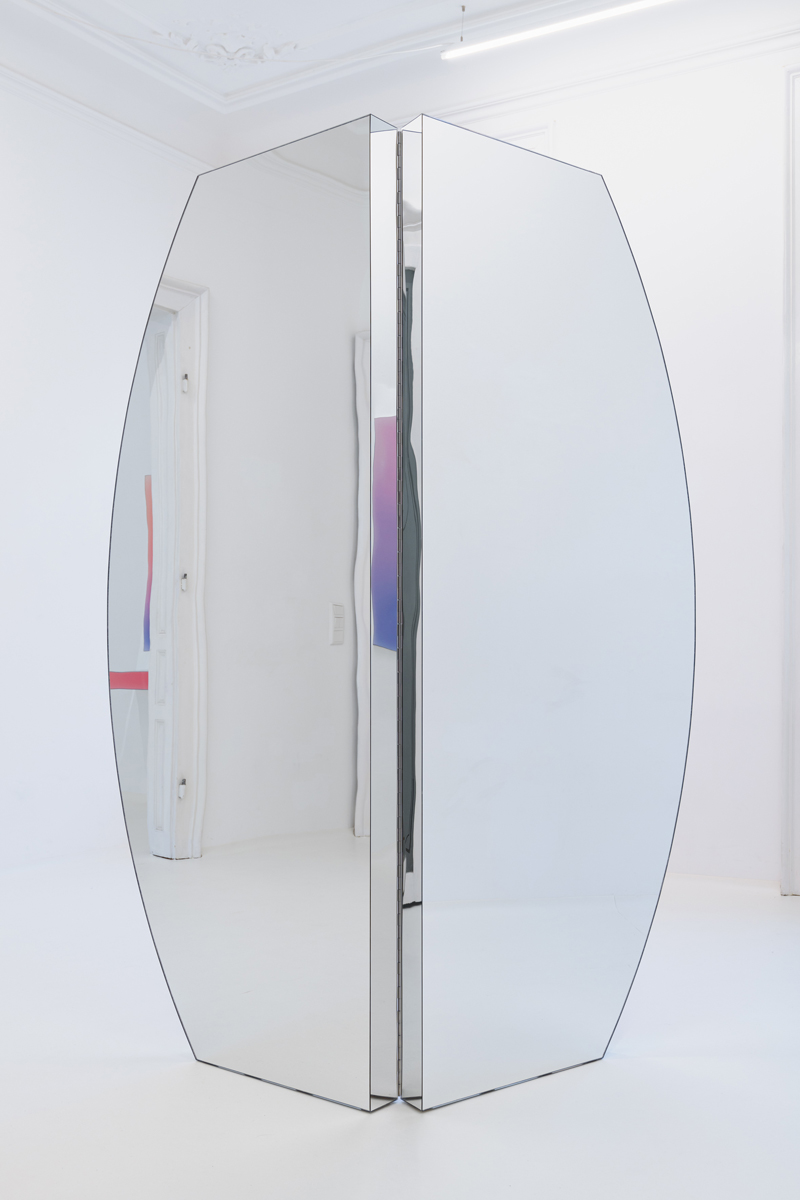 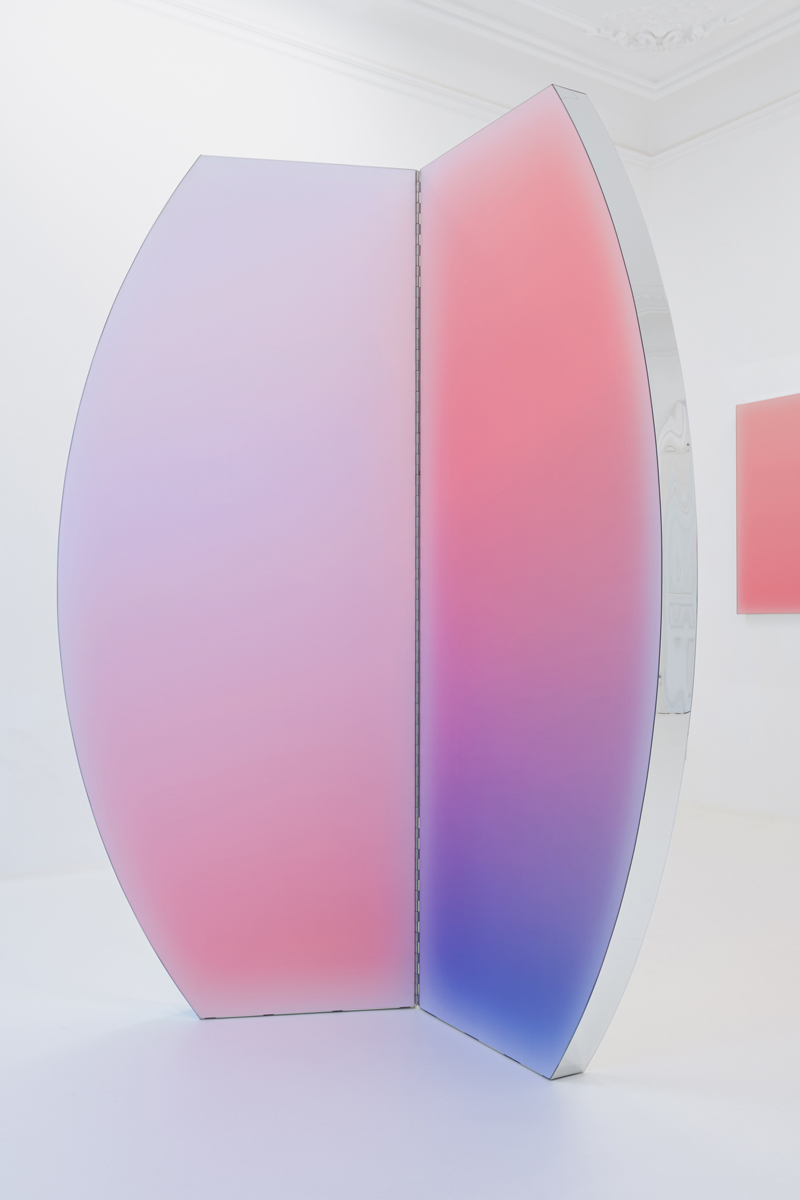 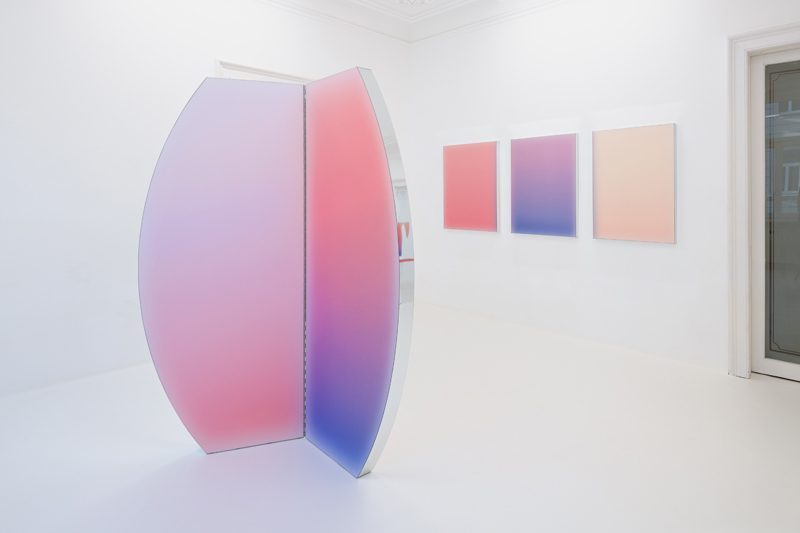 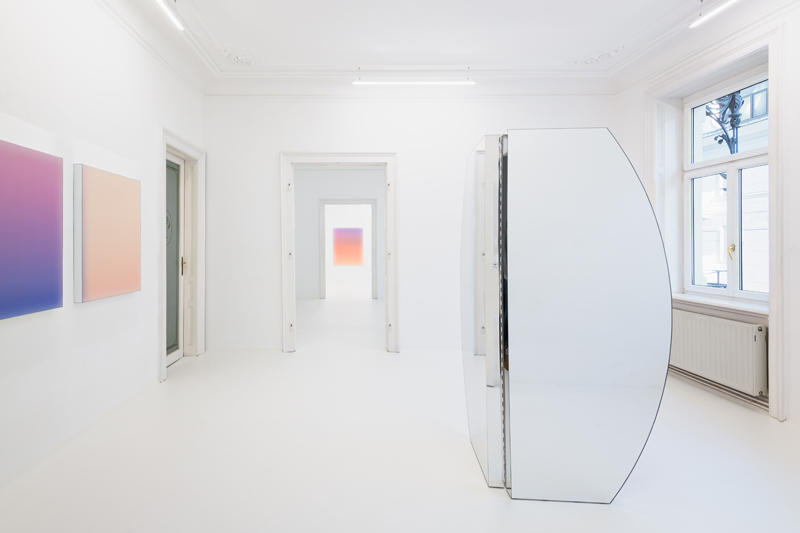 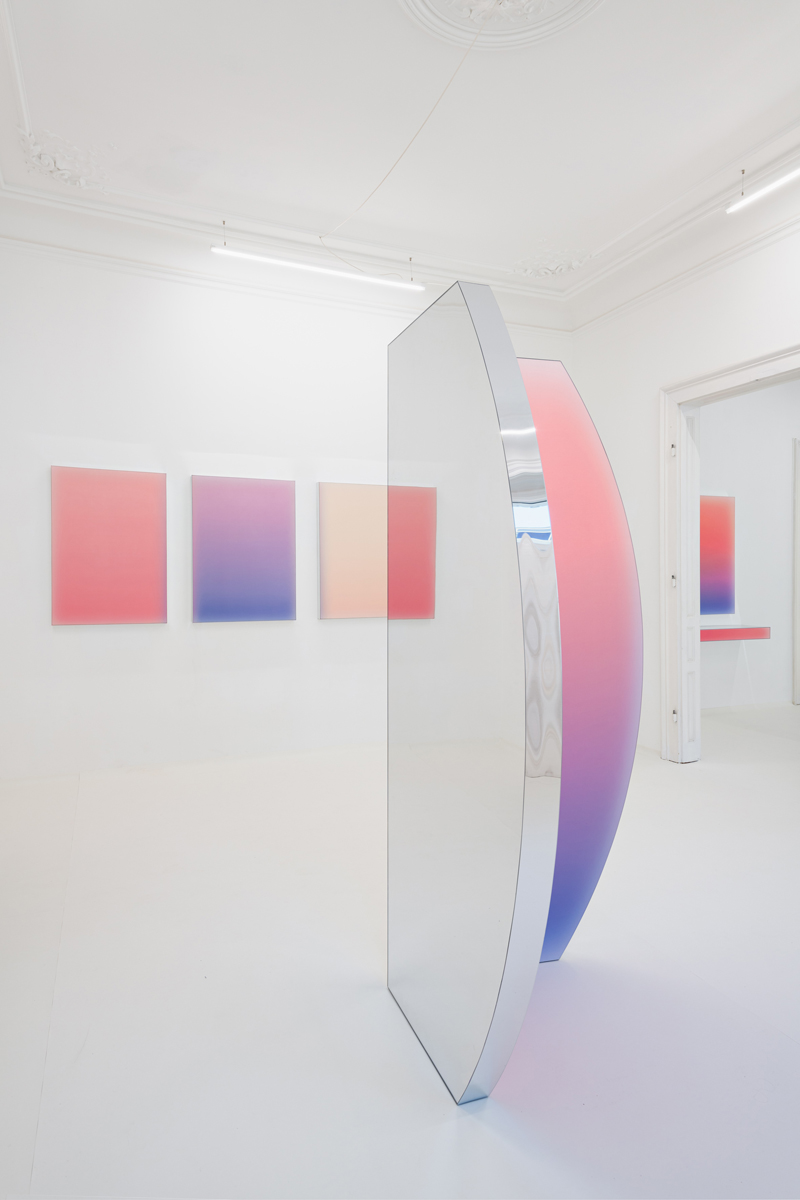 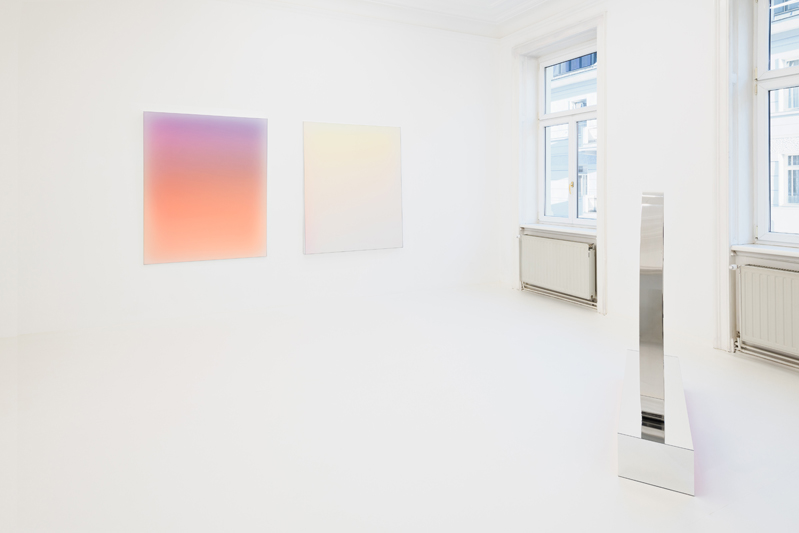 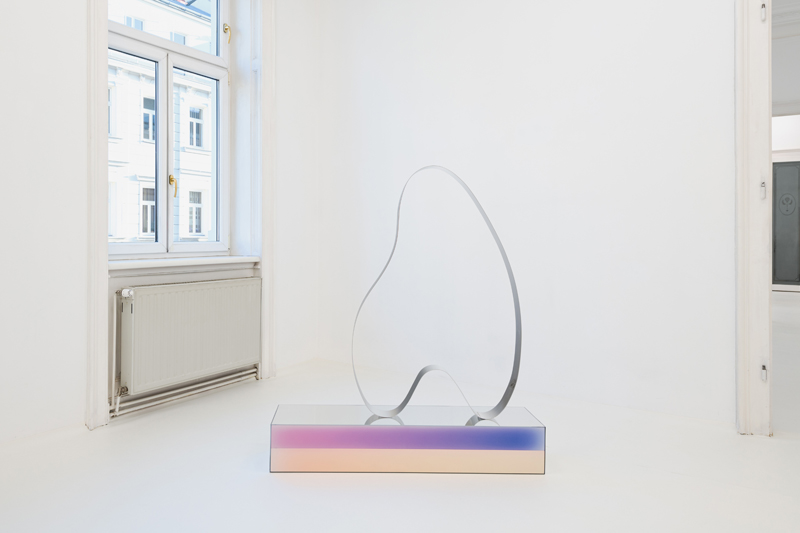 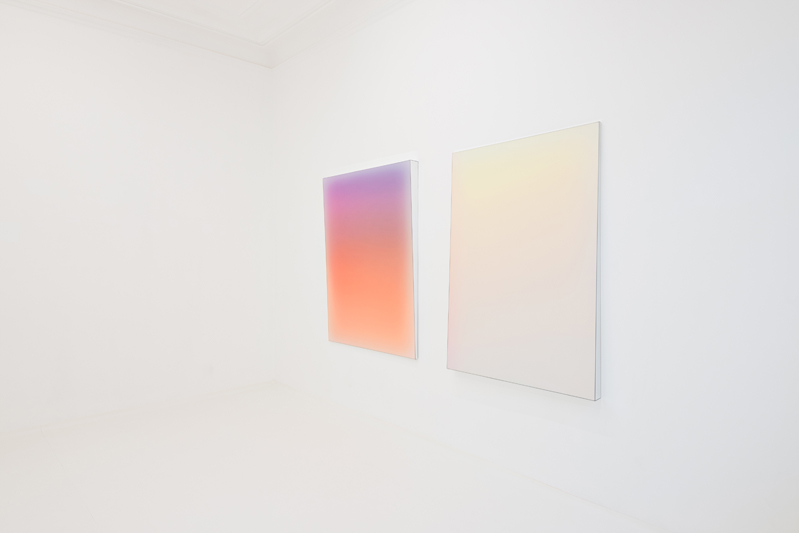 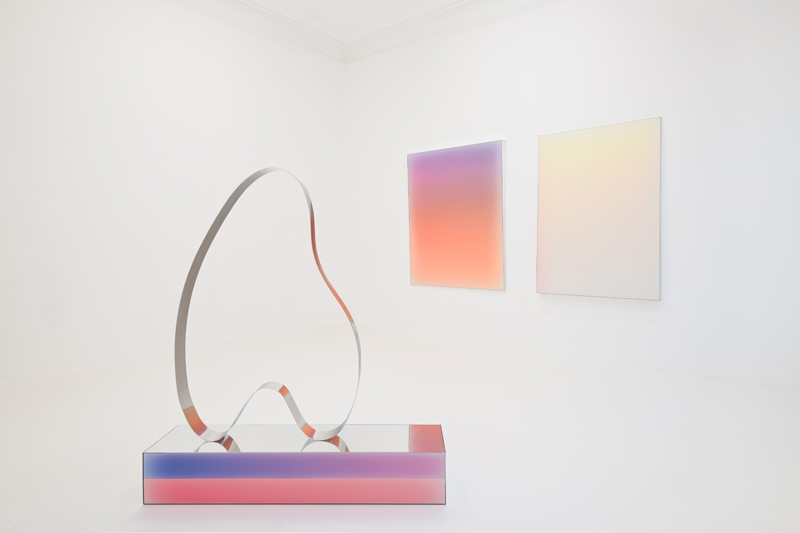 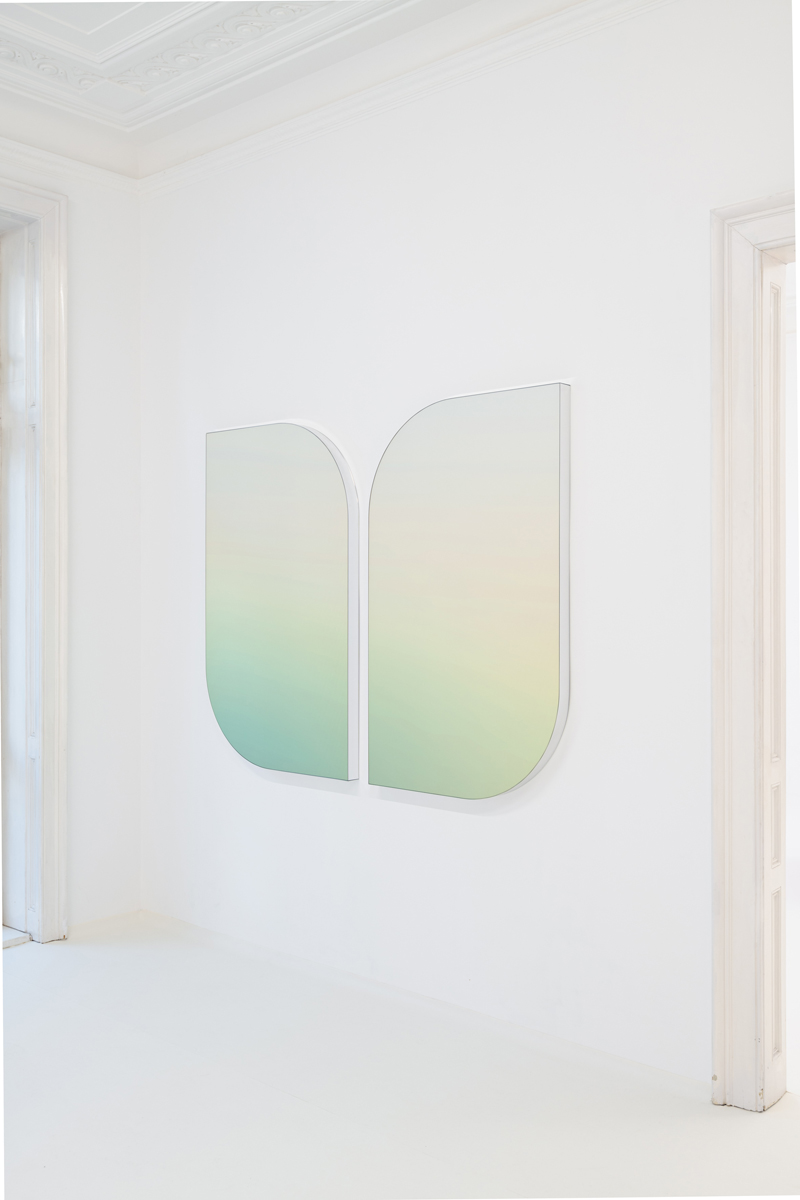 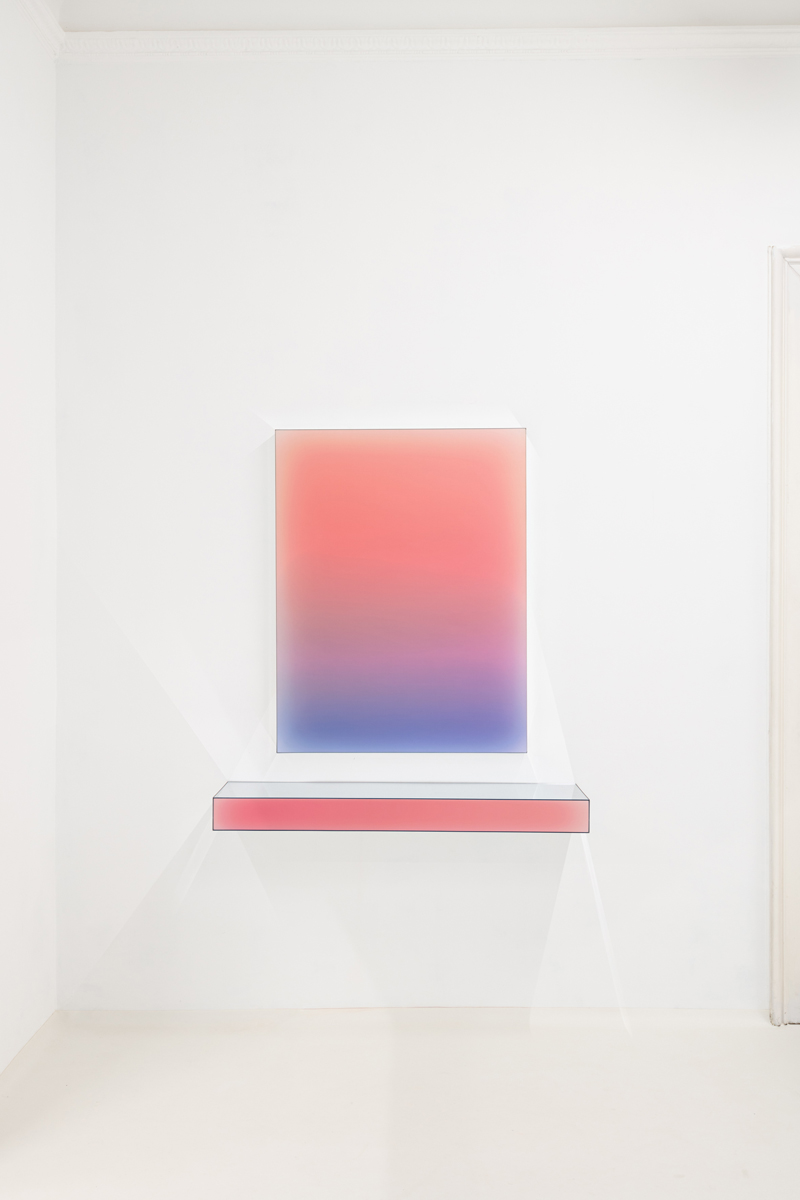 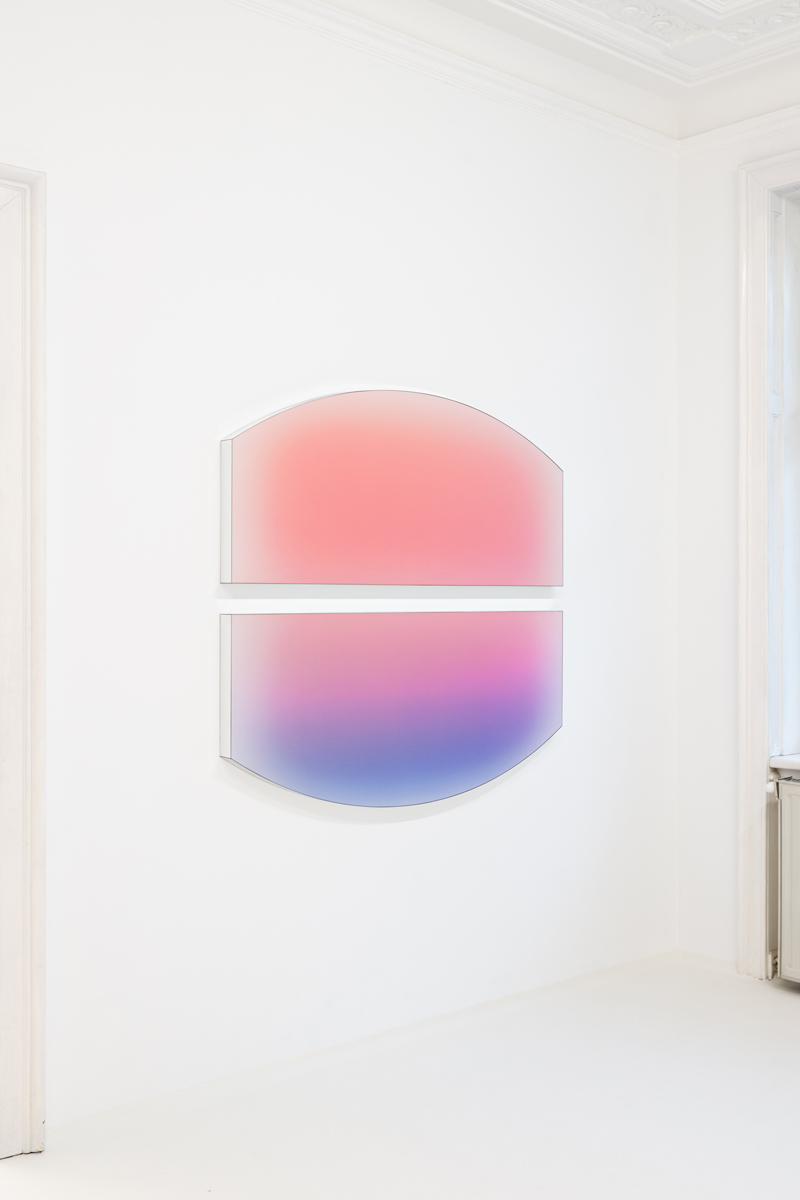 From Eye-Shadow Black to Stardust Violet: Jonny Niesche’s Worldly Abstractions in the Age of the Digital

“Painting no longer appears as a strictly circumscribed mode of expression but as a zone of contagion, constantly branching out and widening its scope. Painterly practices emerge in other genres such as photography, video, sculpture, printmaking and installation.” (Daniel Birnbaum, 2001)

Daniel Birnbaum describes a movement in which Jonny Niesche takes part and which he contributes to shape – not merely (or primarily) because he often straddles the line between painting and sculpture, but because of the role digital technology plays for his work. Indeed, an updated list of media beyond traditional painting in which painterly practices appear today would have to include digital art. Niesche doesn’t hide the use he makes of Photoshop, but he doesn’t emphasize it either. We sure may look at his practice in the tradition of New York Minimalism, Frank Stella, Mark Rothko, James Turrell, Josef Albers or Heimo Zobernig, his teacher at the Vienna Academy of Art, but if we don’t go beyond, we will fail to notice important aspects of his work that make him relevant to current subjects in art. More unusual than Niesche’s interest in earlier abstract artists, is his predilection for glam aesthetics, which first appeared with visits to the makeup department with his mother as a child, where he became fascinated by the colors, shapes, materials, surfaces and mirrors on display.

Although they are expressed in abstractions, his references to popular aesthetics are very tangible, so substantially that they could hardly materialize without digital techniques. For one exhibition, he created a color palette based on the makeup of the Blondie singer Debbie Harry using Photoshop. For another, decorative plates with gold edges were the source of inspiration. The makeup of David Bowie also appears again and again as a reference point. But the cosmos is no less present than cosmetics in Niesche’s art and where earlier exhibitions had Australian or Californian sunsets as reference points, Cosmos Cosmetics Vol II at Zeller van Almsick literally takes up a stardust color palette. The fact that all of this can be perceived in works that actually seem abstract is due to the great formal precision with which the artist operates. He succeeds in creating works with a new kind of worldliness: they unerringly convey the emotions of concrete events, times, places or cultural tendencies, but without explicitly representing them themselves. Quite like a déjà-vu, this can induce an almost magical feeling of recognition in the viewer.

Niesche’s worldly abstractions are unique and thrive on his high formal standards. Sometimes he makes hundreds of tests before he finds exactly the color and form combinations he is looking for. Occasionally he takes a work home for a few days to observe how it looks at different times of day in a domestic and private environment.

His special form of world reference, which could also be called “indexical”, is a first important aspect of his work. A look at his creative process reveals a second aspect: his use of Photoshop makes him one of the pioneers of a new form of painting. After loading a photograph into Photoshop and then duplicating a photographic color sample, he can paint with sunset red, eye-shadow black, blush pink or stardust violet: He not only introduces new colors that were foreign to traditional abstract art, but also intelligently activates the specific representational potential of digital image creation. Where traditional CGI moves from the abstract to the concrete, creating naturalistic depictions out of thin air, Niesche does the opposite, skillfully moving from depiction to thin air, replacing what Nelson Goodman calls “denotation” with exemplification or sampling. However, his works in space are not only analog placeholders for actually digital works. On the contrary: the effect of the reproductions of his works on a screen is a far cry from the fascination that emanates from the installations when we get a chance to see them in an exhibition space.

Many other artists who compose works with Photoshop conceptually weaken a perfectly digital work when they print it, artificially creating flatware that can be traded and hung. For Niesche, the digital preparatory work is essential, but his works are by no means complete before they are installed in the room. There are two reasons for this: their formatting and their visual impact. The former often has no digital equivalent. Some constellations evoke screens, others, for example, make-up tables or windows. The way they occupy space and how we experience ourselves in relation to them also evokes the world beyond the gallery space.

But even more impressive is their optical quality. Some works have halos radiating beyond the frame. They thus appear to be double framed and at the same time boundless, the wings of his diptychs or triptychs radiate onto each other in different ways, depending on the amount of light, thus affecting each other’s optical colors. Even without an electrical power supply – only by perfectly tuning the works to our perceptual apparatus – some of the surfaces begin to pulsate. The effect of the works changes when we move in relation to the pictures and sometimes we have the feeling that the colors are streaming in a certain direction or that a portal has opened in the room, sucking us in. Some effects, like the sparkle of glitter, the mirroring sufaces or the haziness of stardust have been imported to be focused or amplified, others have no direct equivalent outside the exhibition space, either in ordinary life or in computer graphics.
Niesche’s works suggest at least three approaches: we can enjoy their unique way of referring to abstract art, decorated bodies and different natural and cultural contexts, explore their autonomous visual qualities, or think them through in terms of the relationship between digital and analogue. In a tangible and metaphorical sense, this creates multiple layers that challenge us formally and intellectually over and over again.