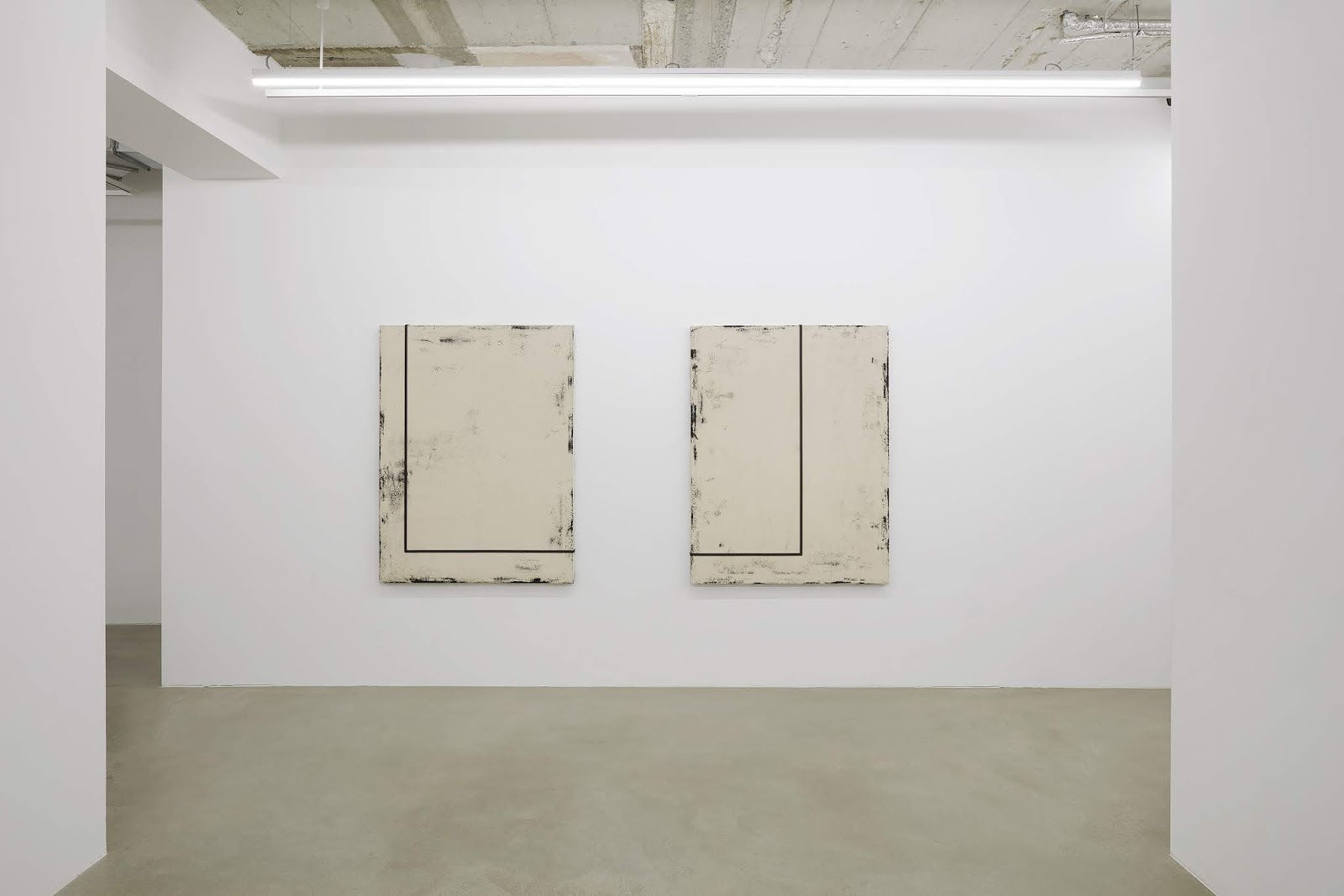 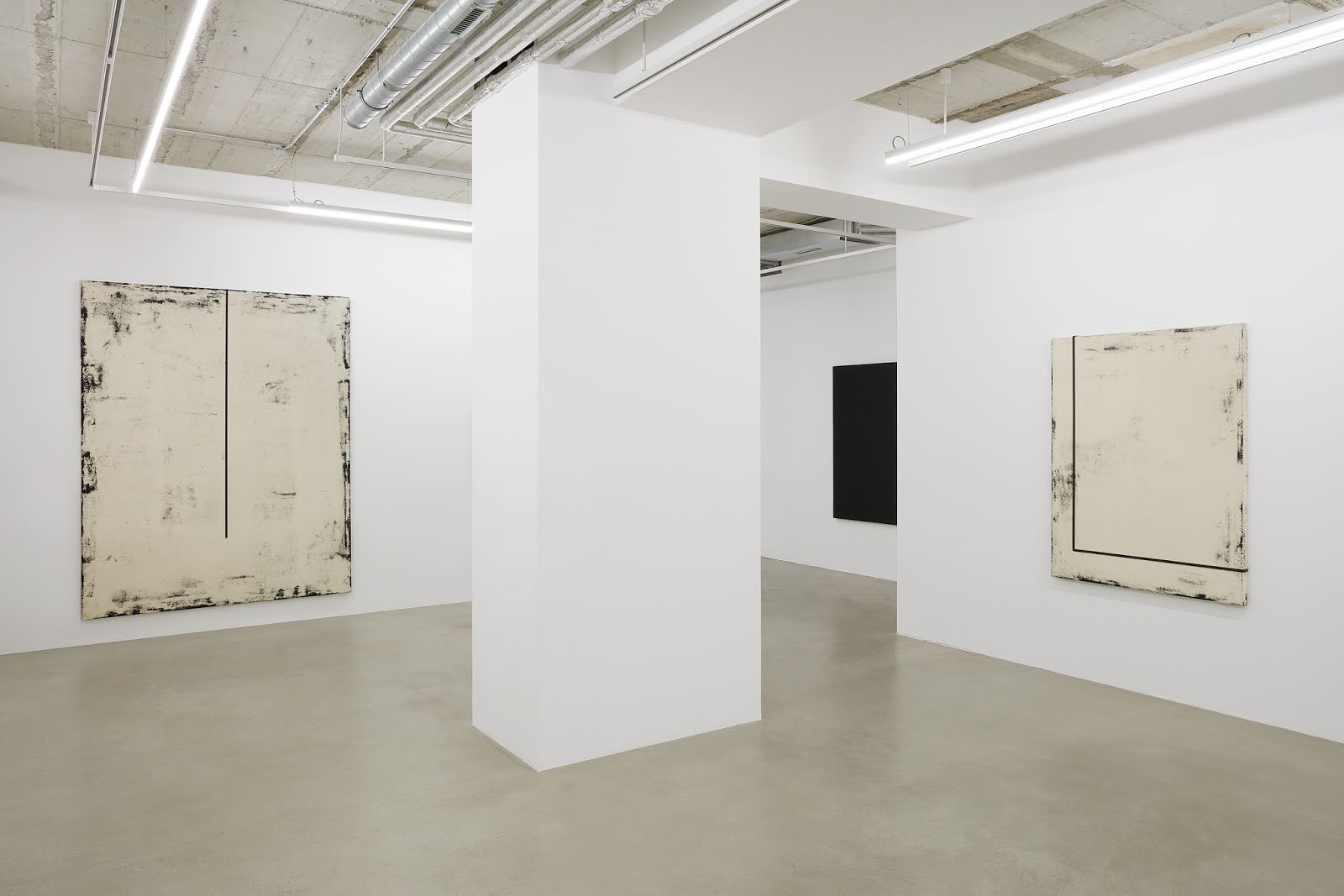 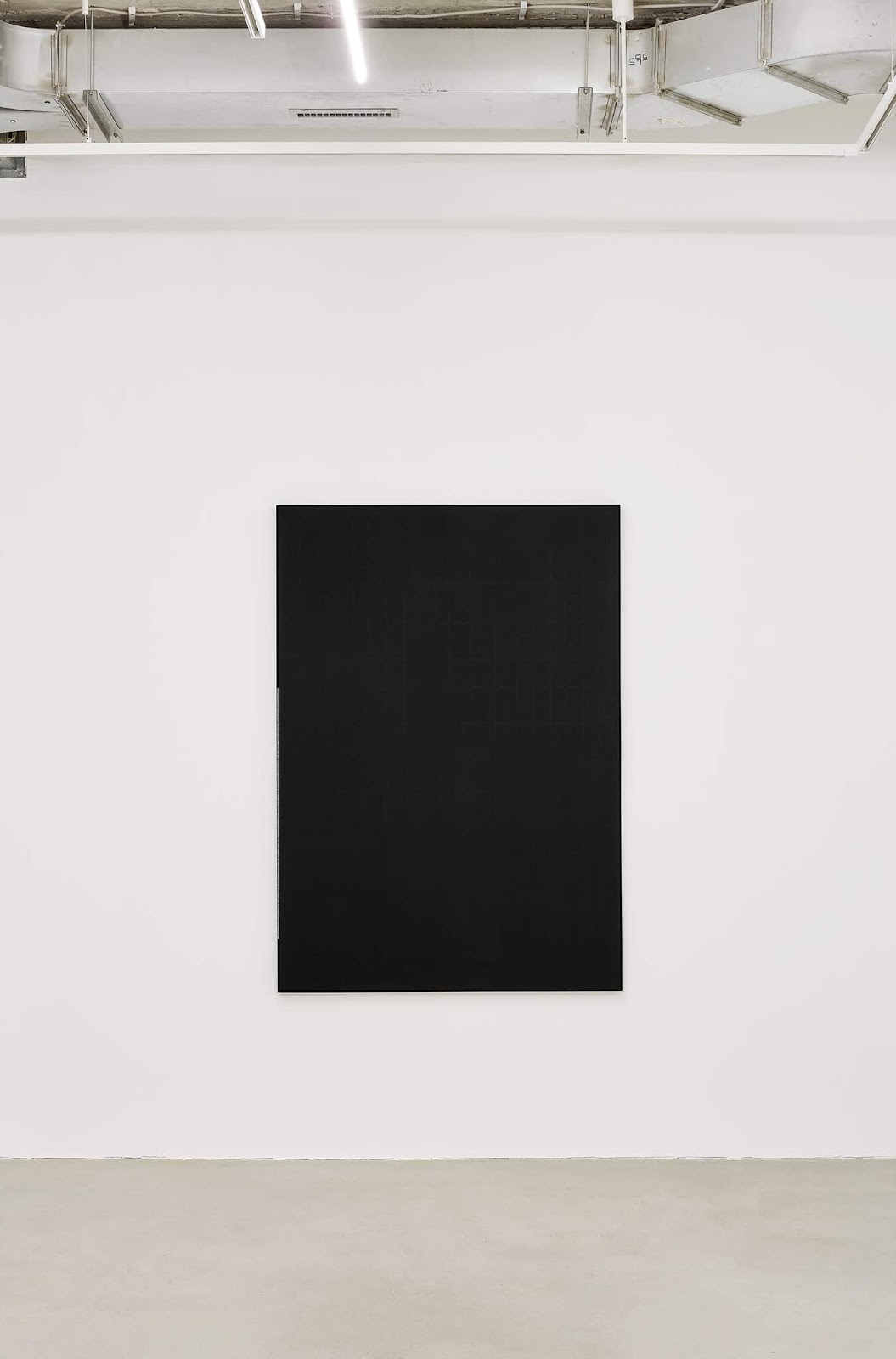 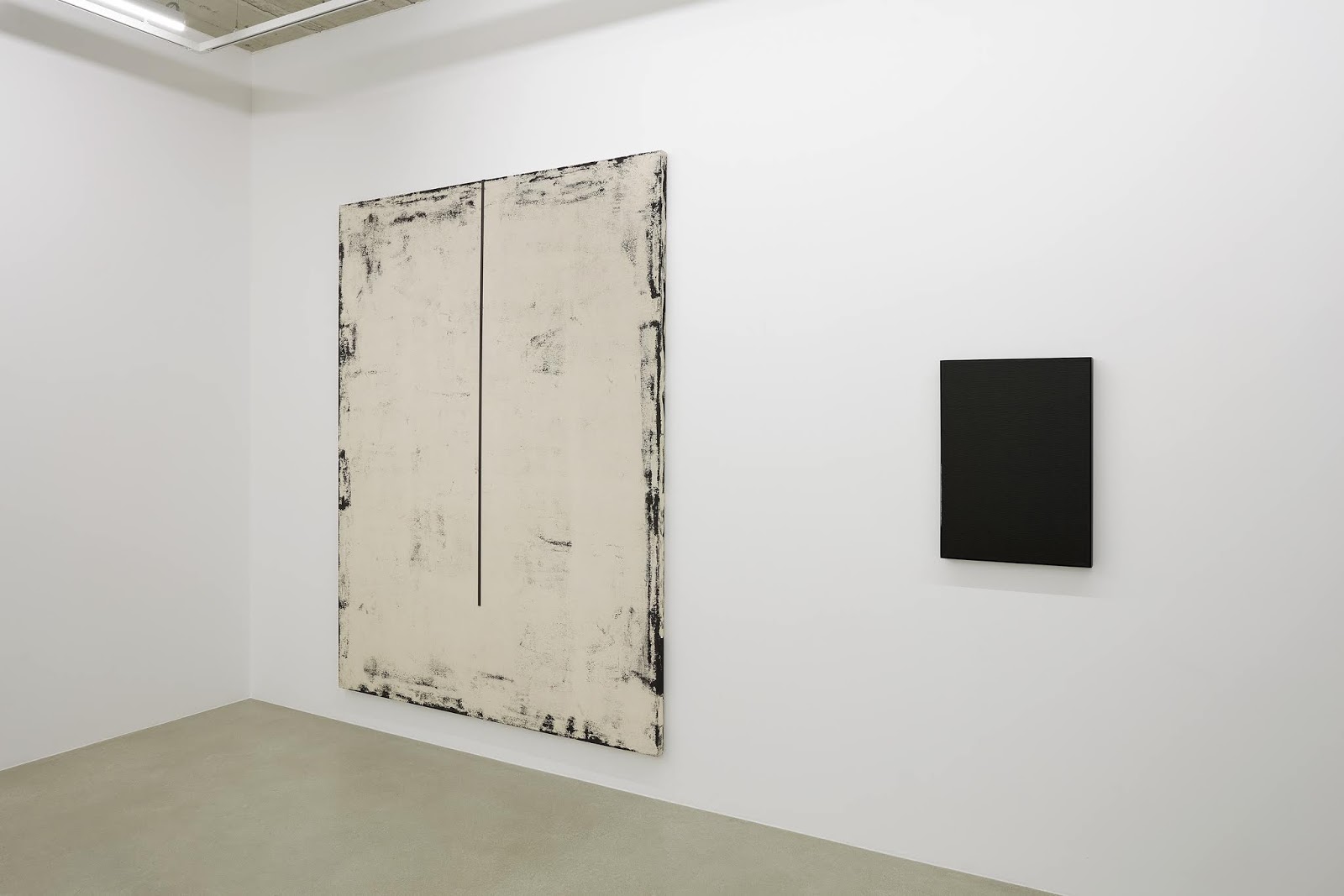 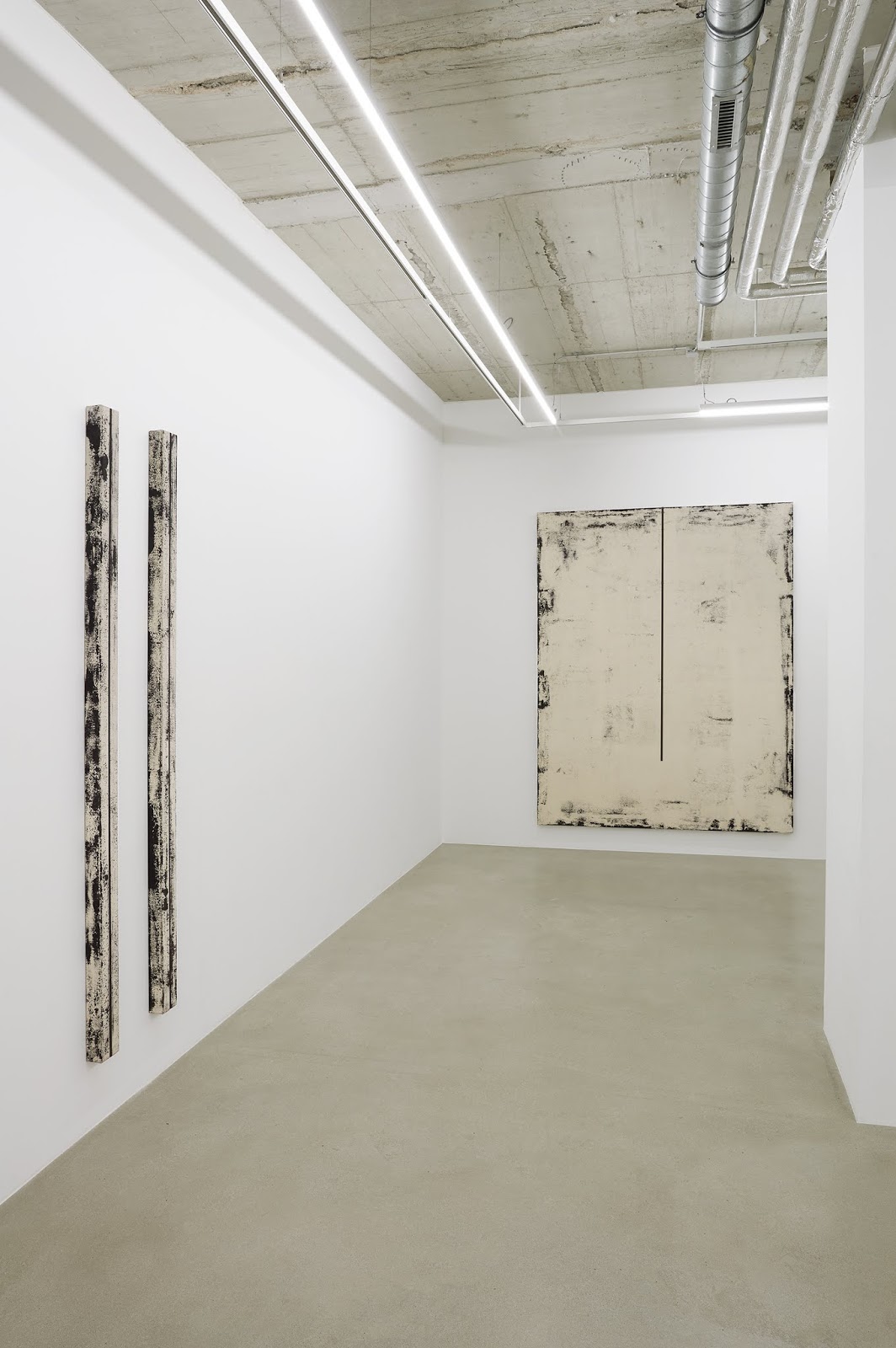 Laura Sachs works in a unique way with bodies of images composed of volatile and solid materials.
Accentuated with metal strips or completely enclosed in aluminium frames, the canvases assert
themselves as multi-perspective objects in space.

In the "Noon" series of works, oil paint is pushed through the canvas in a first step, the fabric is then
detached from the stretcher frame and restretched with its original backside facing the front. As in a
kind of frottage process, paint particles and dust are also removed from the studio floor. Finally, Laura Sachs adds thin powder-coated metal strips in different positions, which run around the edges of the picture and seem to fix the canvas. At the same time, they prove to be basic elements that stabilize the composition of the entire body of the image.

In the "Sidenote" works, a grid is first painted with canvas primer, which only becomes subtly visible on the canvas, which at first glance appears pure black, when a black monochrome colour surface is applied. Between the canvas and the aluminium frame surrounding it, a piece of white fabric is inserted in each case, which gives the work a compositional structure, similar in function to the metal strips. However, a certain element of coincidence is always present in these controlled processes perse. The artist reacts to changes occurring during the painting process with considered interventions and settings. In this way of working between control and chance, "dialogues" repeatedly arise within her spectrum of forms, colours and materials, which ultimately lead to clear formulations and balanced compositions.

At first glance, Laura Sachs' works appear serial, but upon closer inspection they turn out to be
painted, composed, and constructed unique pieces that provide clues to their underlying work
processes. In this way, her method of working and her viewpoint differ from that of the
representatives of Minimal Art, to whom her works only seem close at first glance. In this way she
succeeds in enriching the post-minimalist discourse on images through conscious shifts in context.

The representatives of the first purely American art movement, which became known as Minimal Art,
such as Donald Judd, Sol LeWitt, Dan Flavin, Robert Morris or, within painting, Frank Stella, were concerned with turning away from the idea of the creative subject, with the renunciation of expression, content and readable craftsmanship – towards a pure expressiveness of form, colour, materiality and spatial reference. The aspect of the serial and the associated industrial producibility of
a work of art have always been part of this view. To which artists like Blinky Palermo or Imi Knoebel
already reacted in their own way in the 1960s. This art historical frame of reference is also part of
Laura Sachs' artistic self-conception.

In her reduced formal language, the objecthood of her pictures, and the apparent seriality of her
works, Laura Sachs refers to the questions posed by prominent thought leaders. By focusing on the
handwritten aspects, the processual nature of her works, and even references to the place where the
picture was made, she expands the discourse beyond this and in this way formulates an independent
and characteristic artistic position.