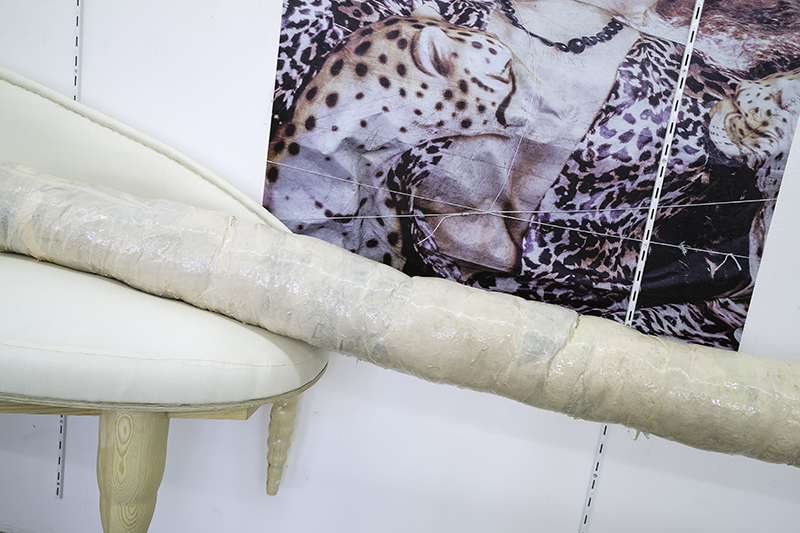 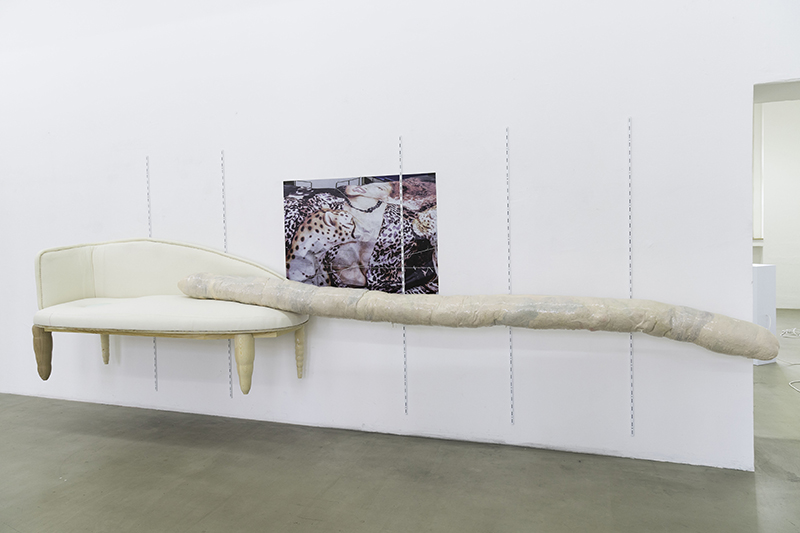 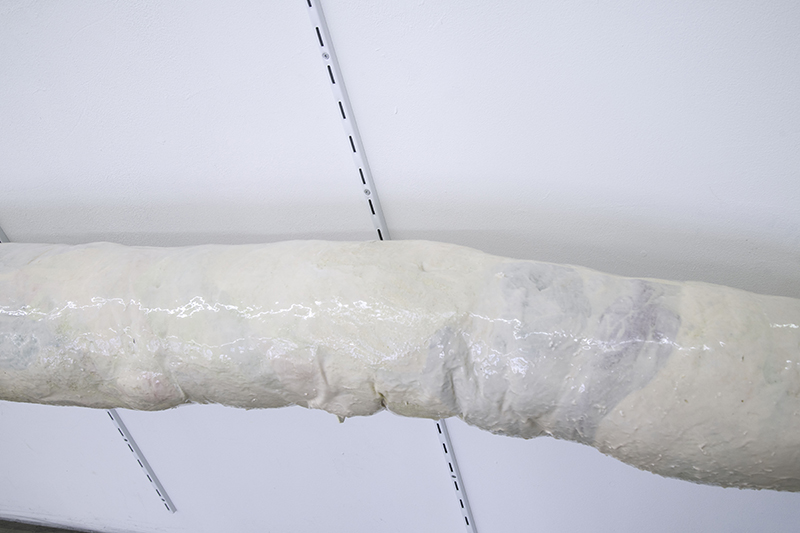 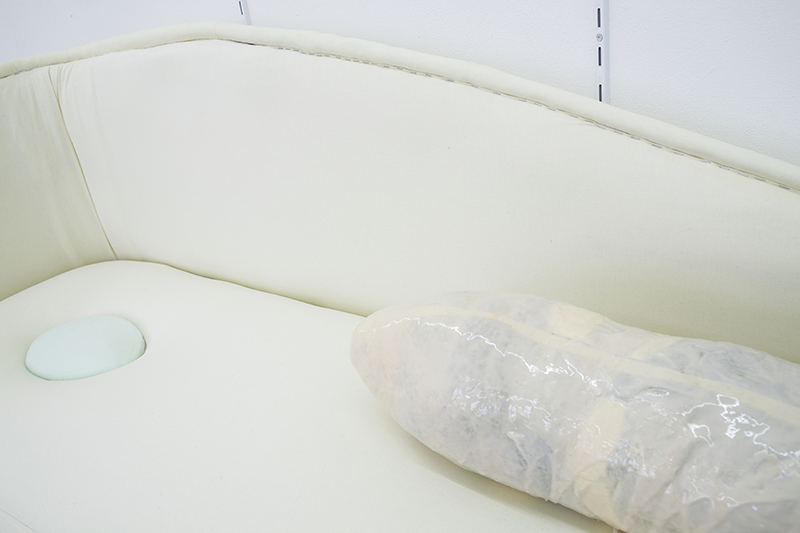 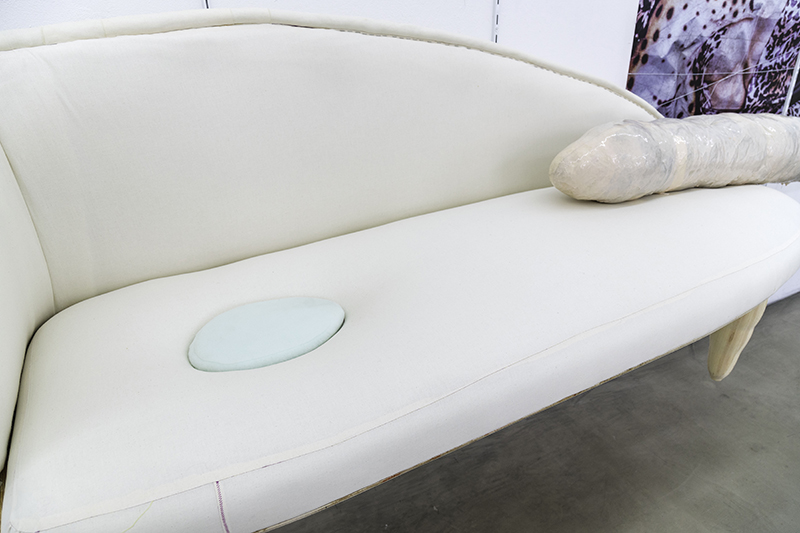 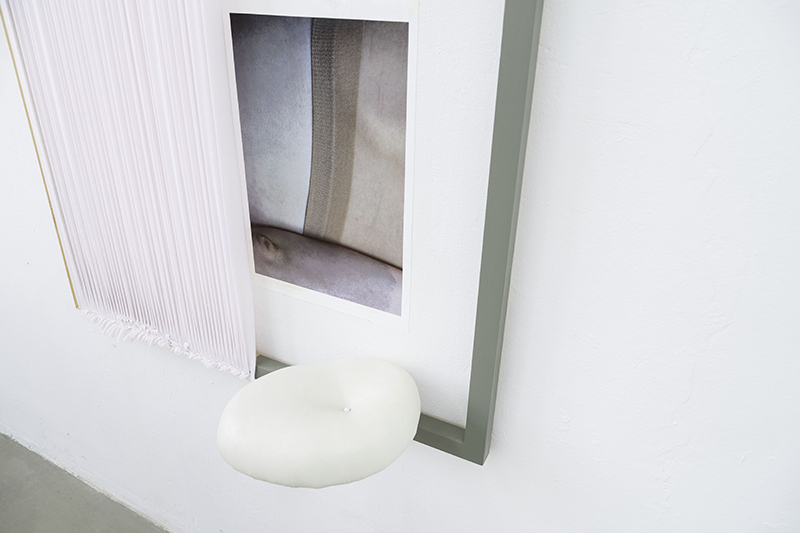 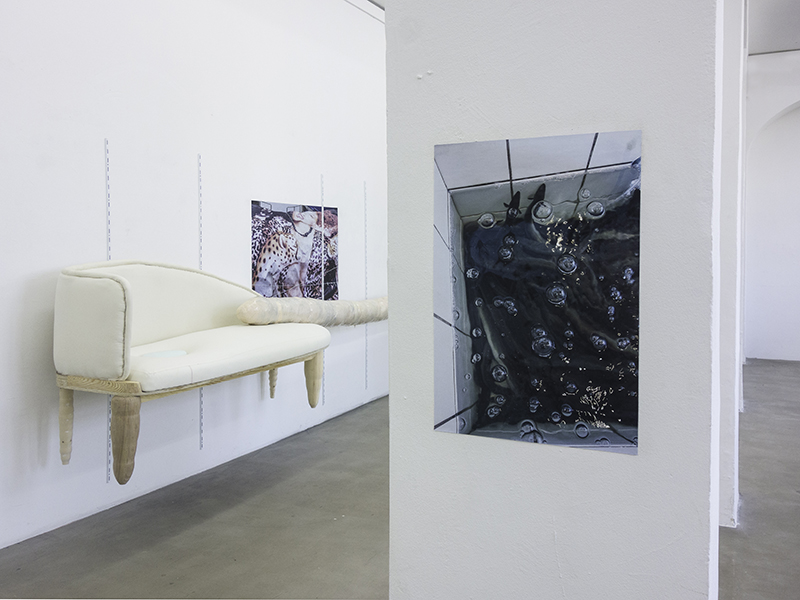 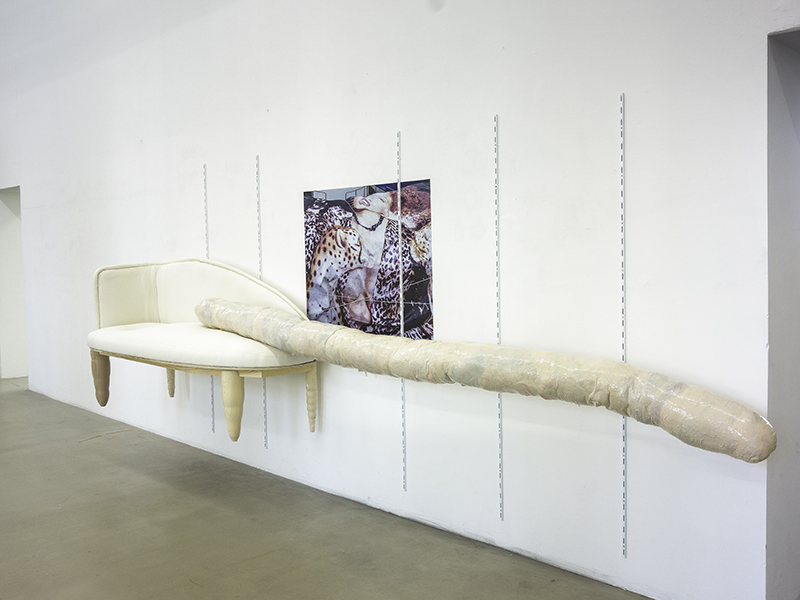 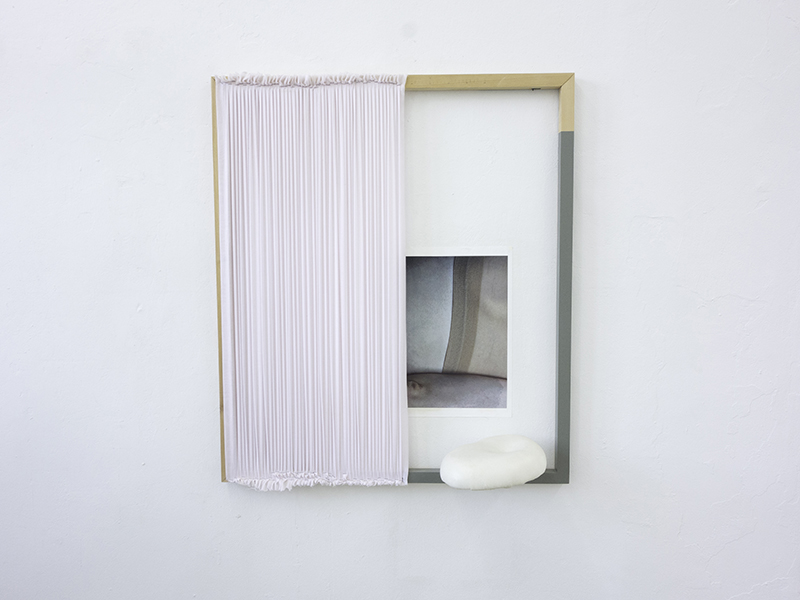 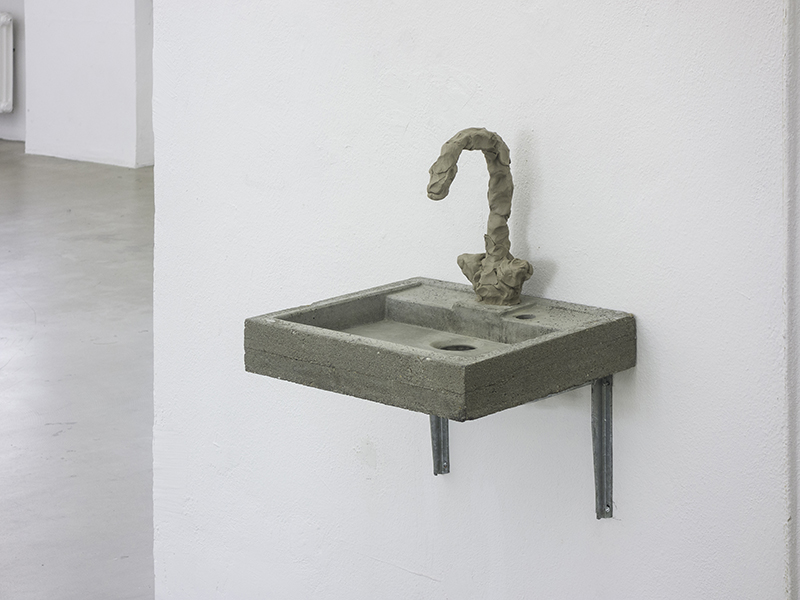 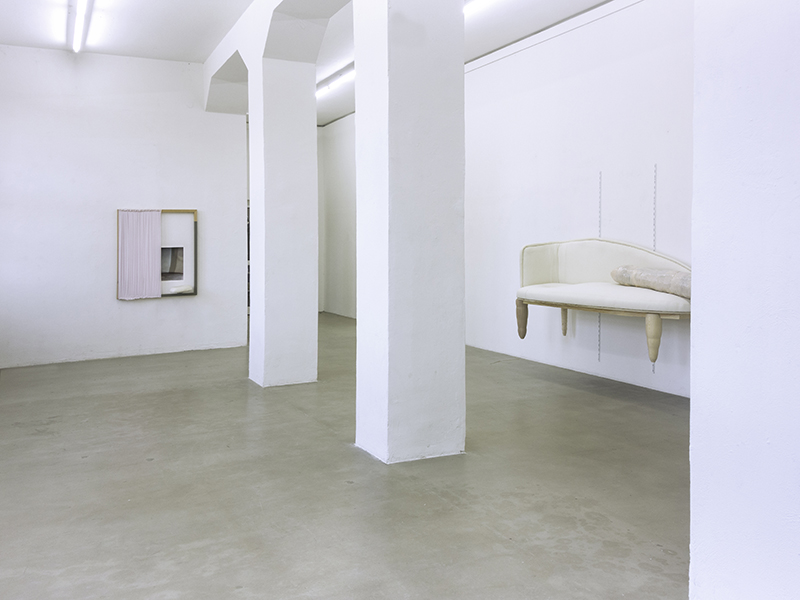 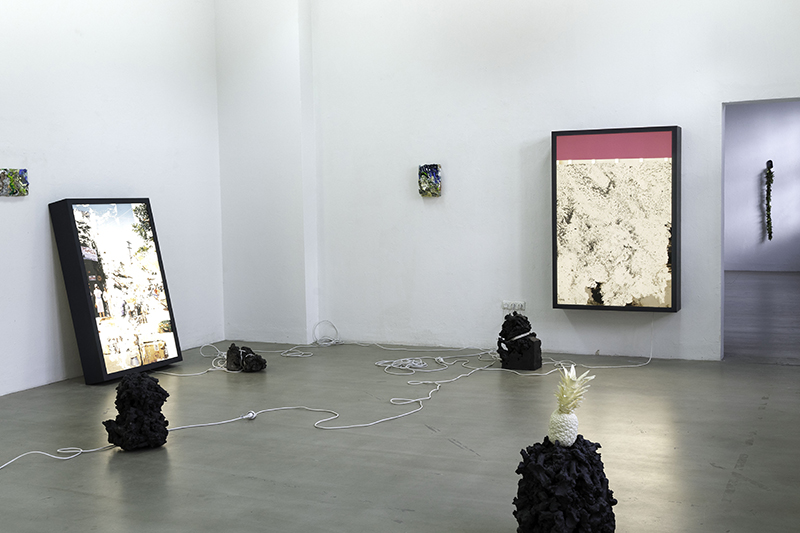 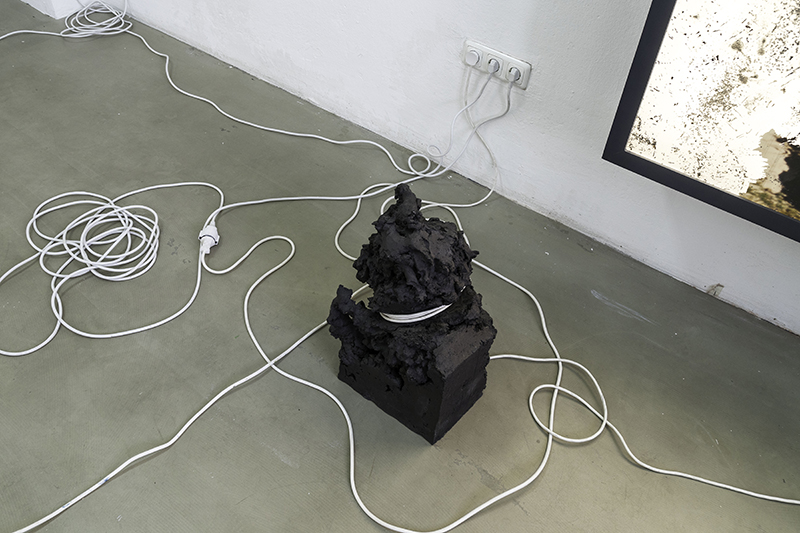 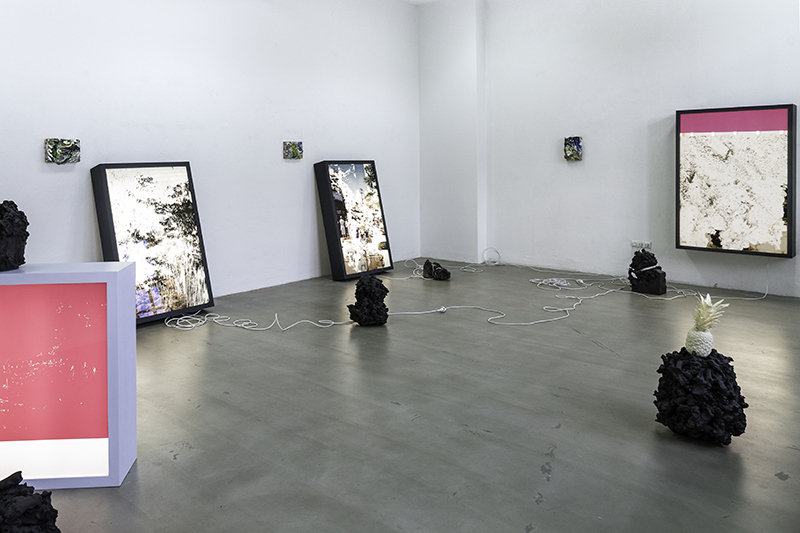 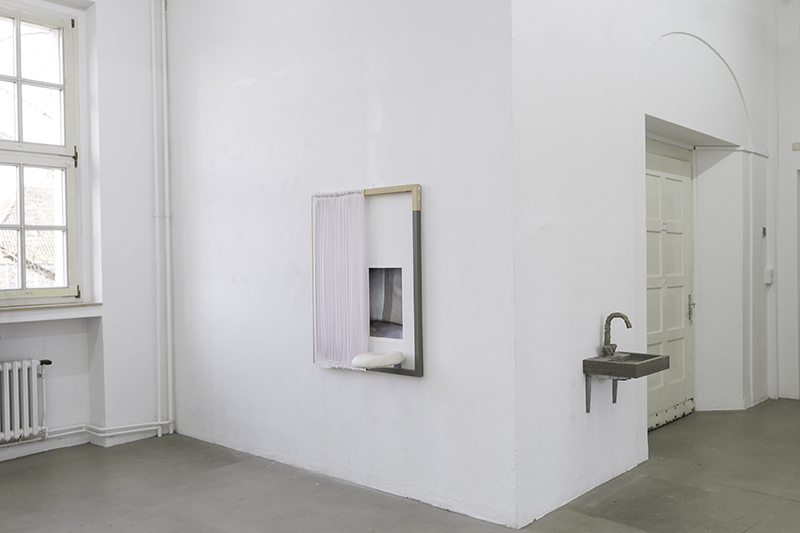 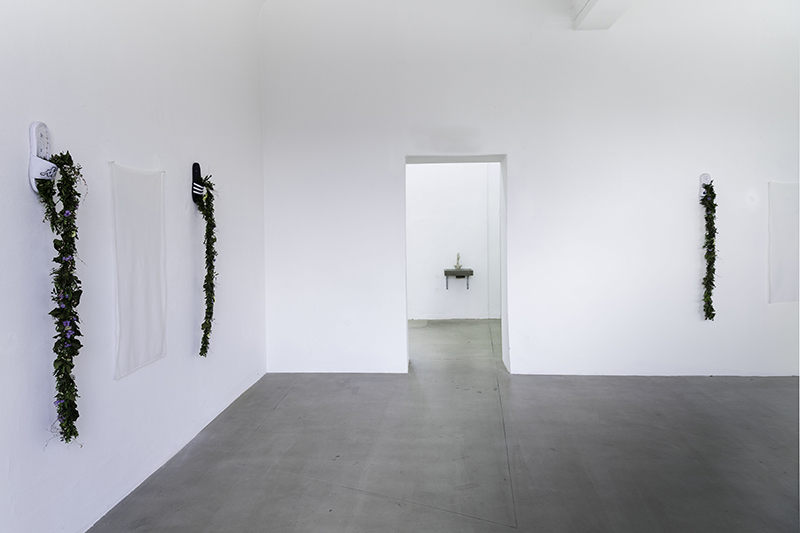 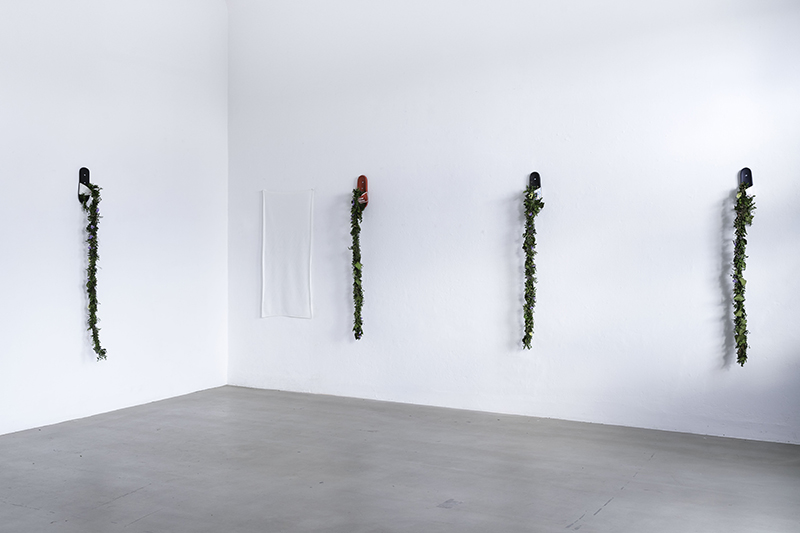 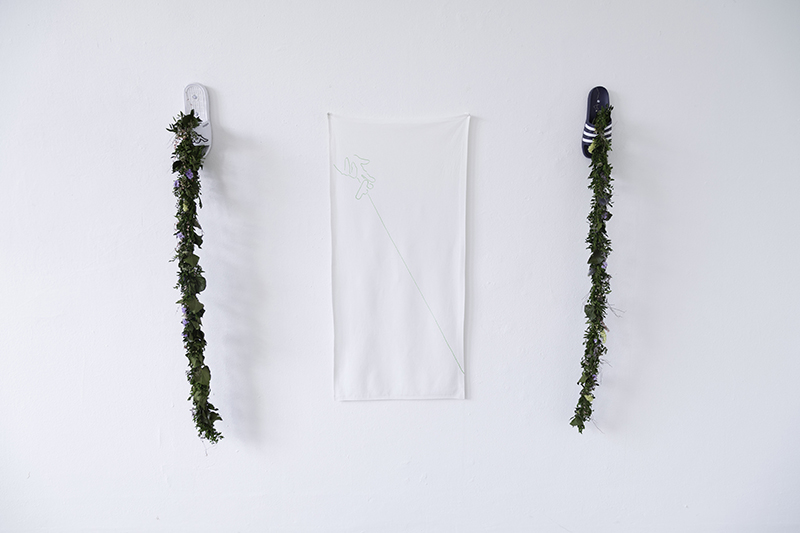 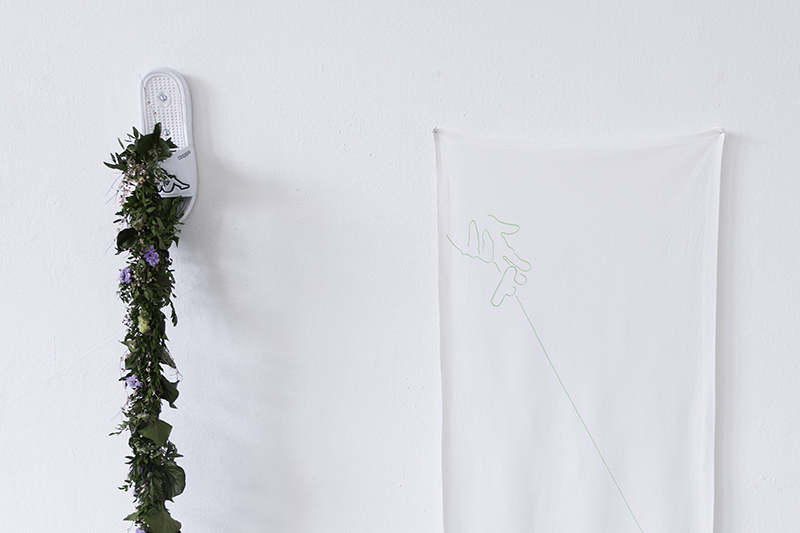 The exhibition drink liquid brings together three positions that transcend genre boundaries, one-dimensional interpretative attributions and style definitions in order to seek instead proximity to neighbouring disciplines and to stage mixed-media forms in an effort to open up new paths of understanding and self-definition for art.

In doing so, Tammo Lünemann, Jens Kothe and Kai Borsutzky create hybrid art forms that allow medial interlacings, overlaps and the surprising devaluations and reassessments of found objects of daily use.

In the work of Jens Kothe, an elaborately crafted sofa does not stand on the floor ready for use, but rather hovers like an object on the wall above the floor, above the area of habitual perception and use. The purportedly usable furniture thus undergoes a transformation. Although it is still reminiscent of an object of everyday use, it now mutates into an artistic object. An object that is not only reminiscent of corresponding everyday situations, of furniture or interior decoration, but also acquires a new function through the spatial elevation and distance from the familiar realm of facts.

The physically attractive form of support defined as such now itself becomes a functional component of a staged installation. As such, it serves as a lateral support for a strangely shaped appendix. The background of this peculiar installation is a blurred photograph, which makes the association with interiors and living room sets an intense experience. Standing in front of these objects, one feels immediately physically spoken to. With their tangible materiality, movements and physical forms seem to find a sensual echo within them. One breathes differently in front of these objects, because the physical reference to them has become different. One perceives the banal as something extraordinary, because it appears in impressions in a new context – like a concrete washbasin that suddenly appears in a prominent place, namely an art exhibition, as though this were the most natural thing in the world.

The play with the familiar, the astonishing experience of the profane, charged with new meanings and definitions, plays a key role in the work of Tammo Lünemann. The visitor to the exhibition enters a kind of profaned hall of fame, a representative room with floral decorations and tapestries. The only difference is that opulent bouquets of flowers are not placed in vessels made of precious metal; in this case, they are instead colourful, uniformly designed plastic fly swatters, some of which are decorated with advertising logos, familiar from sports, sweaty saunas and active leisure activities. Tammo Lünemann deciphers our everyday life and experiences with at times surprising results. He analyses the phenomena of our everyday world in terms of their aesthetic and functional significance, their own narrative and their integration into functional contexts. By integrating them into systems of artistic reference, they are stripped of their everyday suitability and banality and thus acquire something sublime, a new certainty of effect and perception that is only remotely reminiscent of their original meaning.

Tammo Lünemann seduces the viewer into sensual imagination and fictional projection, fed by the representational value and the unaltered recognisability of the materials used. When viewed, both merge into a complex, emblematic system of references with an open diversity of meanings.

The essence of memory plays a key role in many works by Kai Borsutzky. The artist creates memory tableaus, fictional places of remembrance in the form of large-scale installations composed of individual works. The organisation and arrangement of his installations within the space reflects the complexity of memory. When we remember something, this memory generally has a multimedia character. We thus do not rely on a single, detached sense, but in most cases recall various aspects of the memory. In accordance with the notion of making the complexity of the remembered experience sensually tangible, he makes use of various media which combine to form a meaningful whole. Three-dimensional objects appear next to paintings and photographs, which are occasionally overlaid with abstract drawings. The drawings themselves often consist of empty spaces, areas scratched out of the picture and thus erased – faded and diffuse shallows of memory.