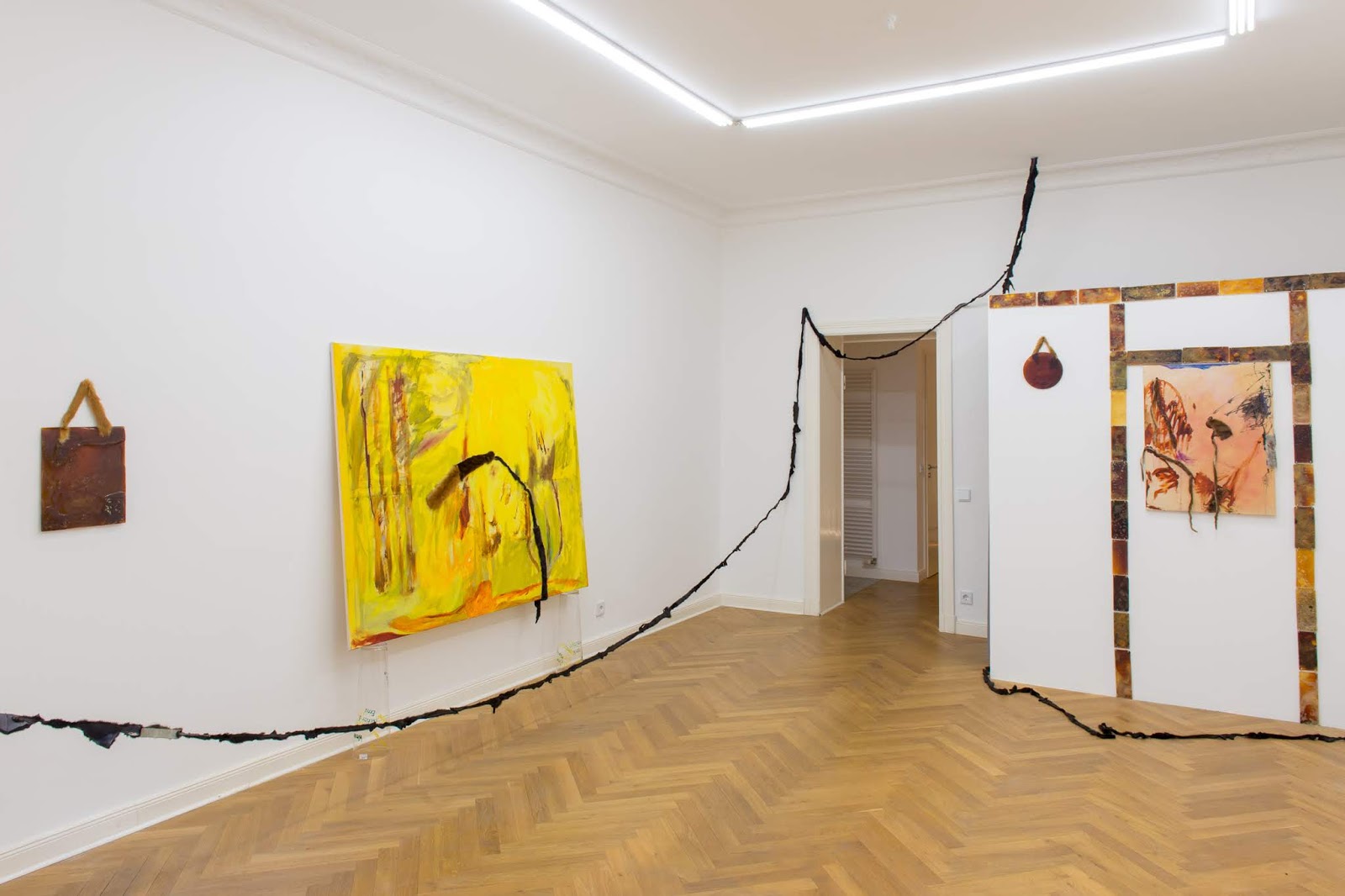 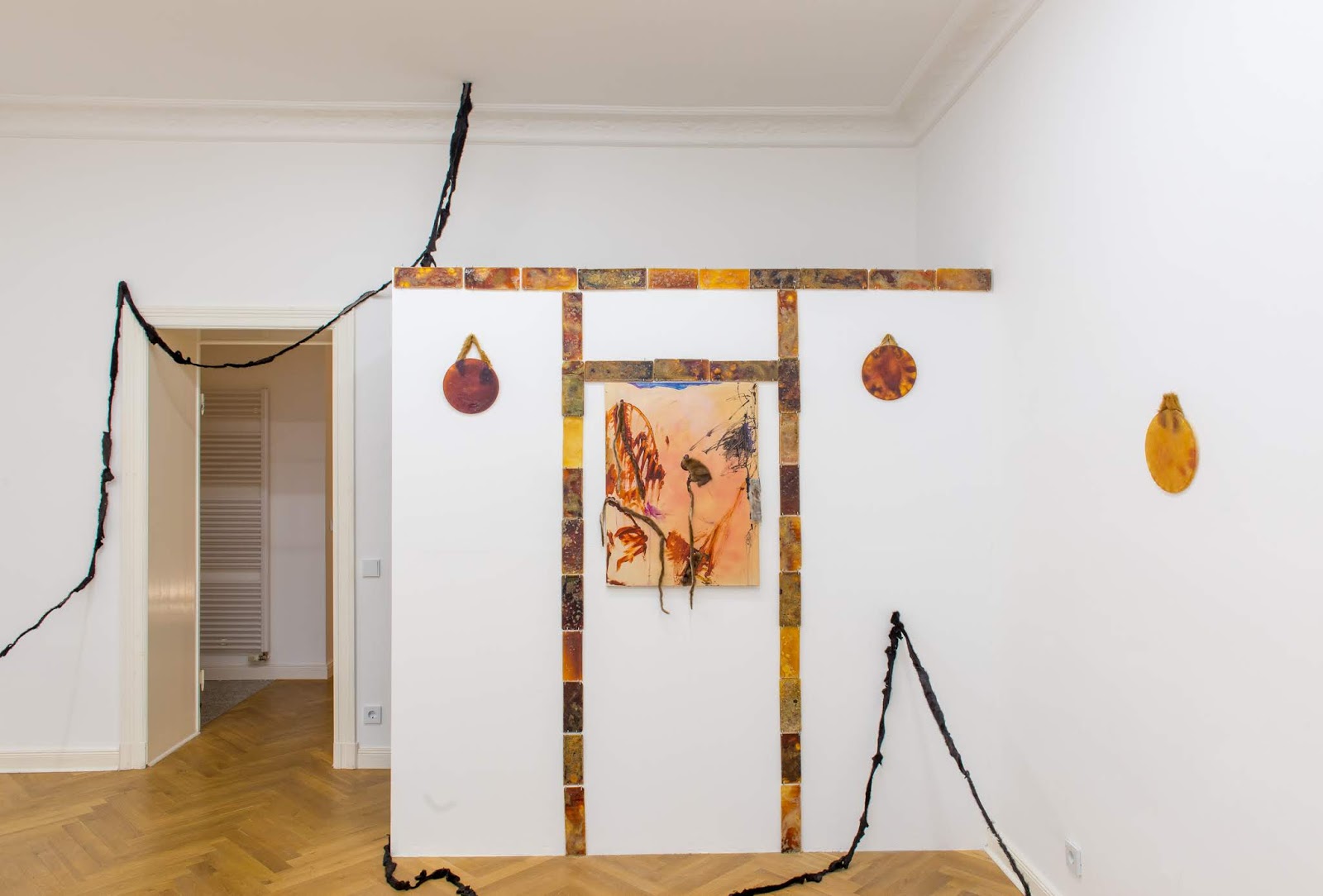 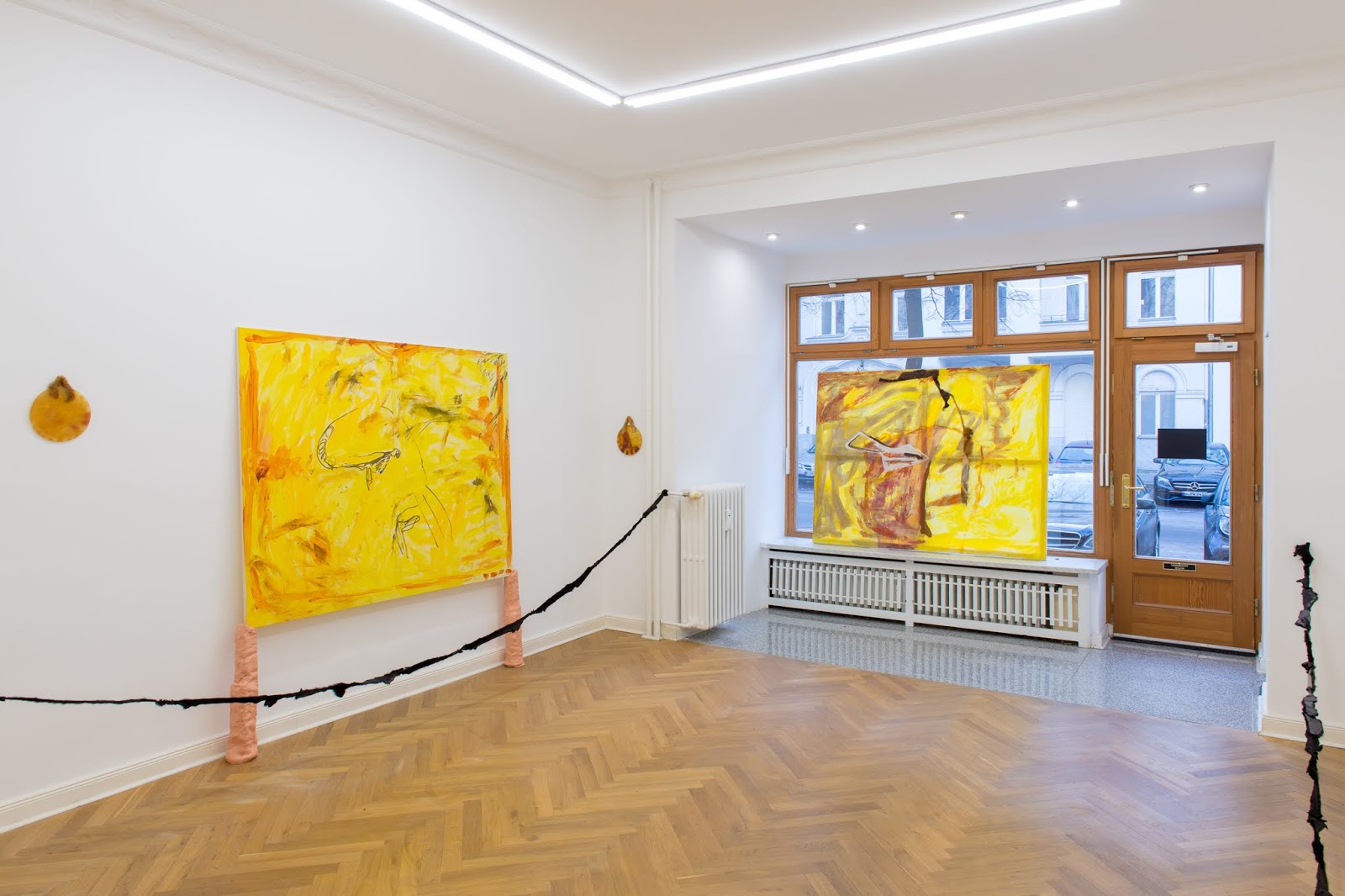 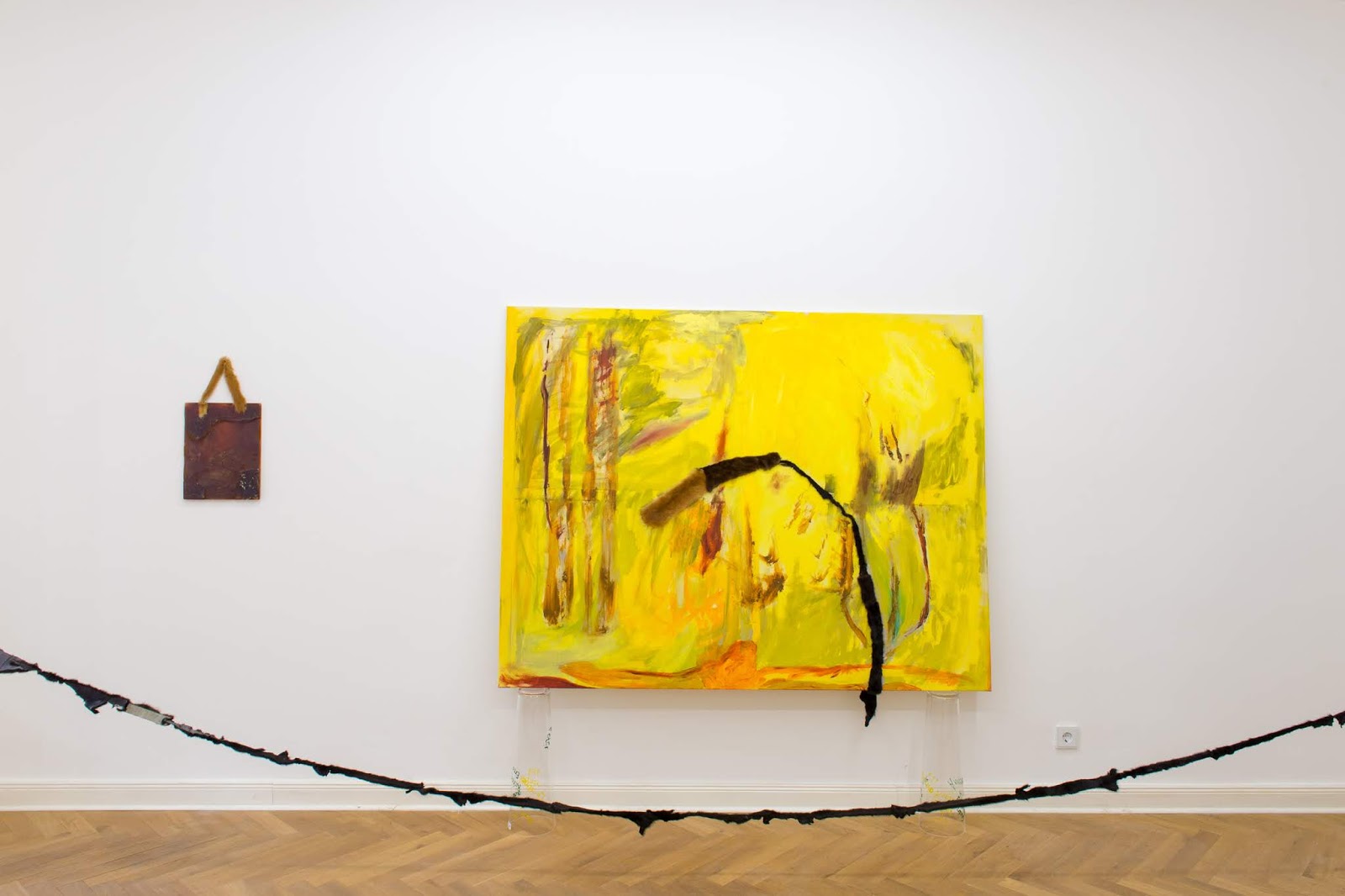 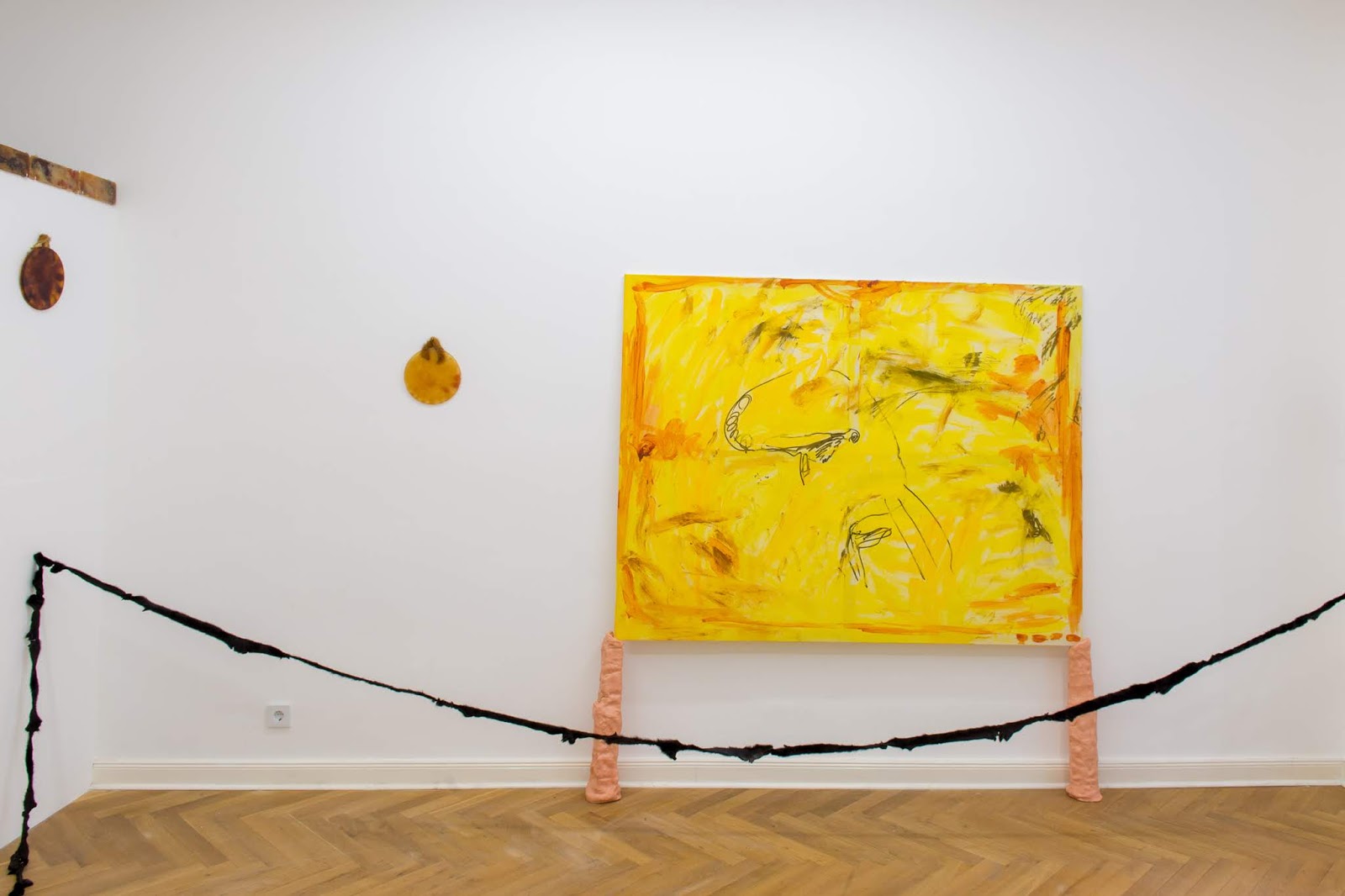 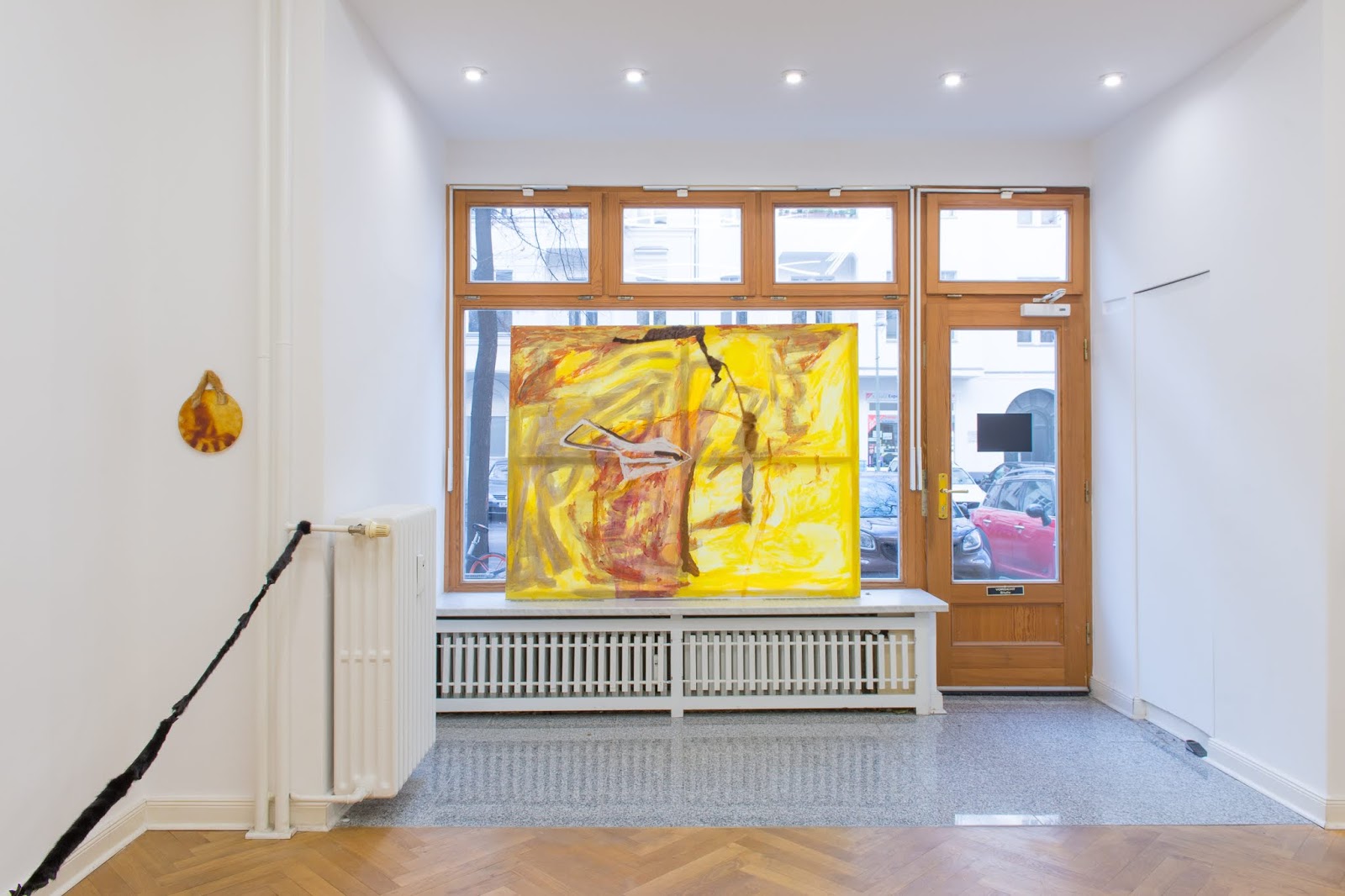 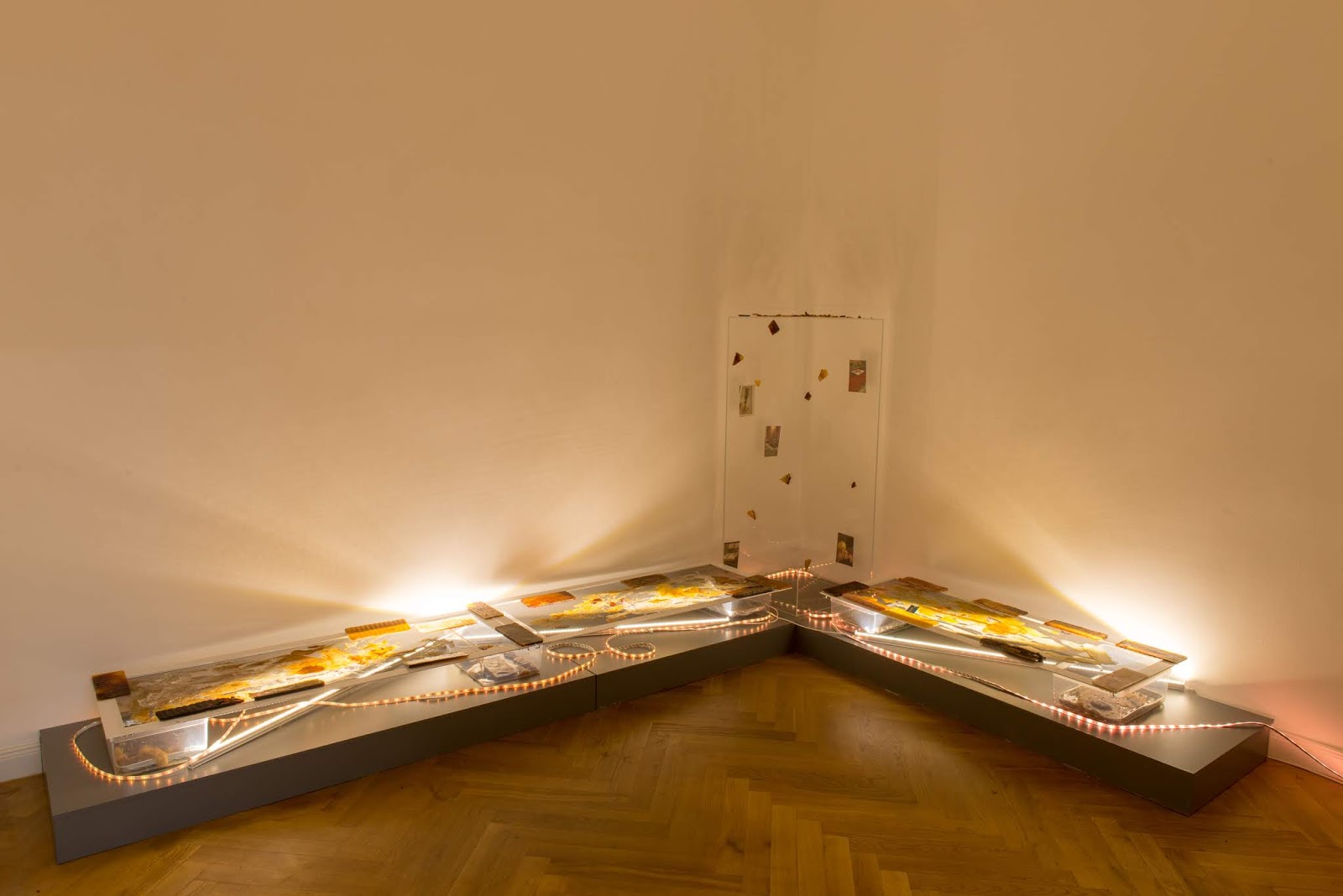 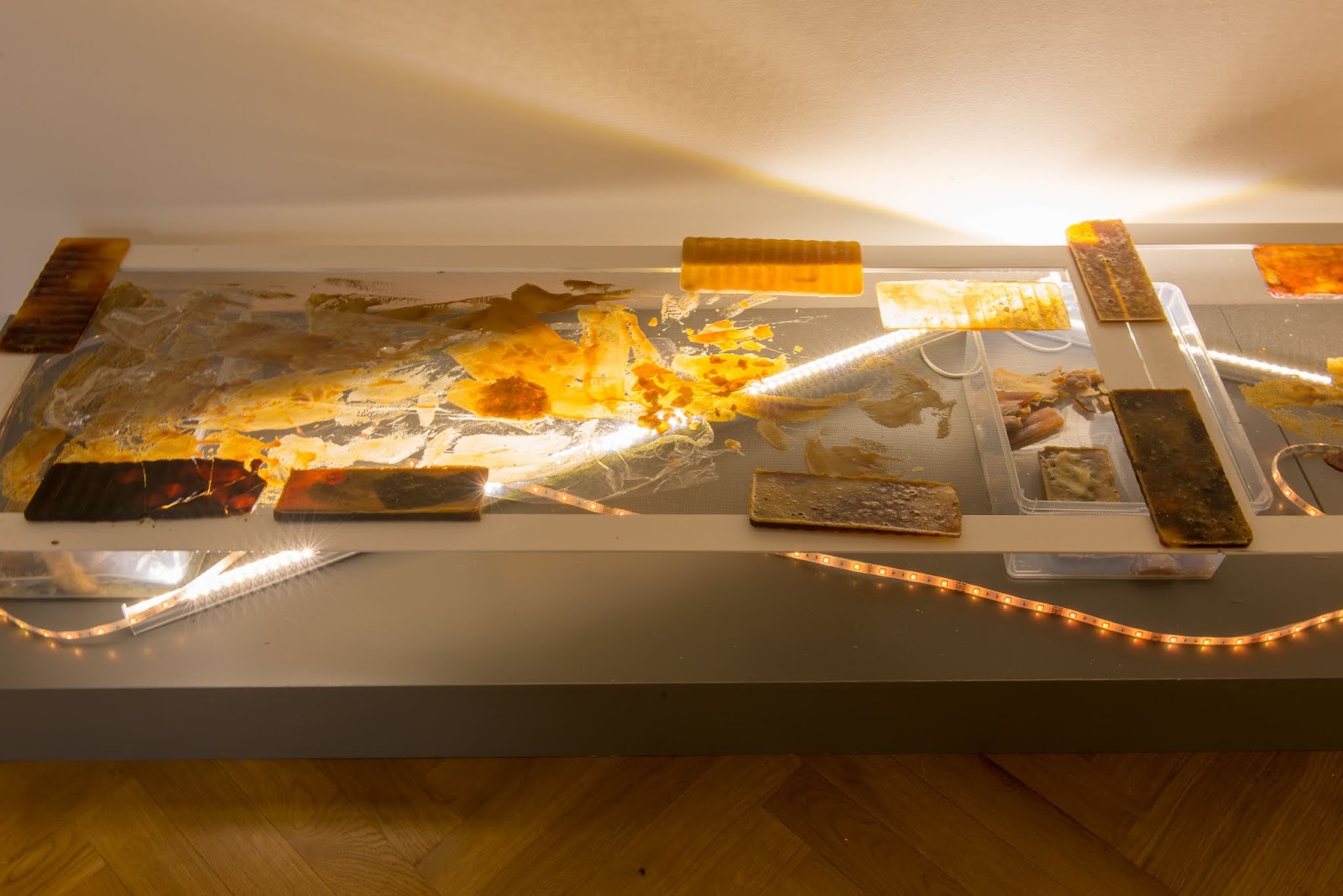 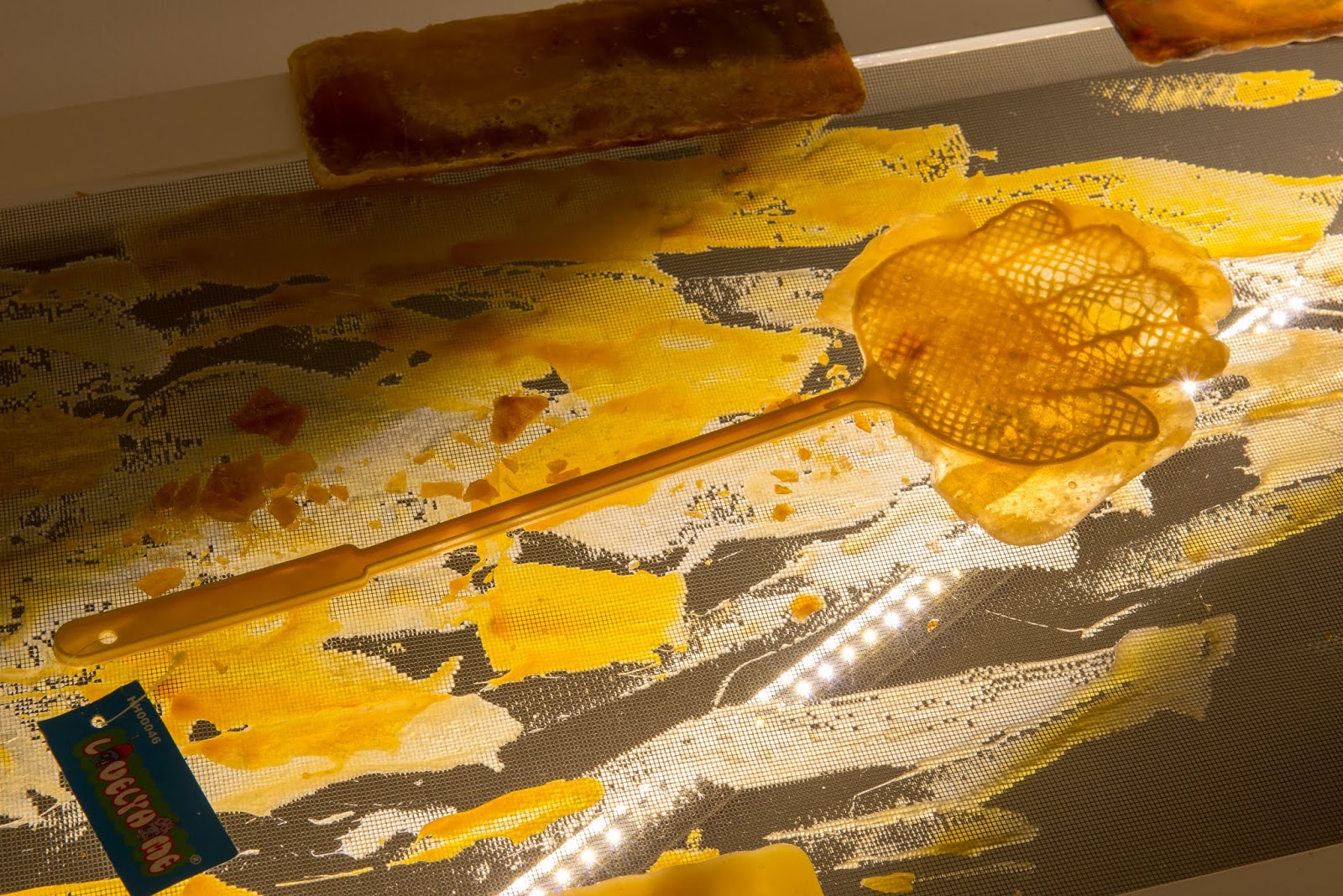 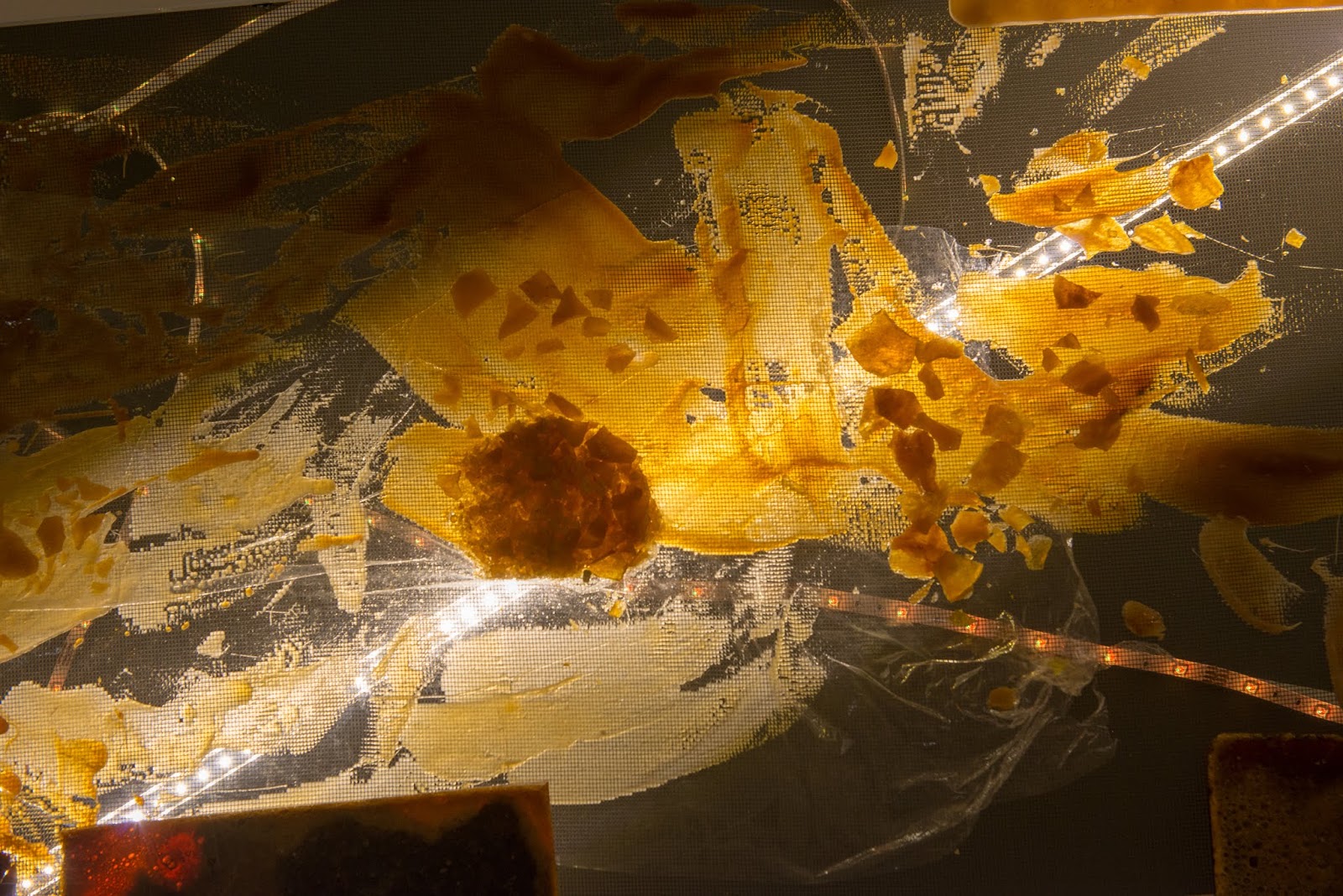 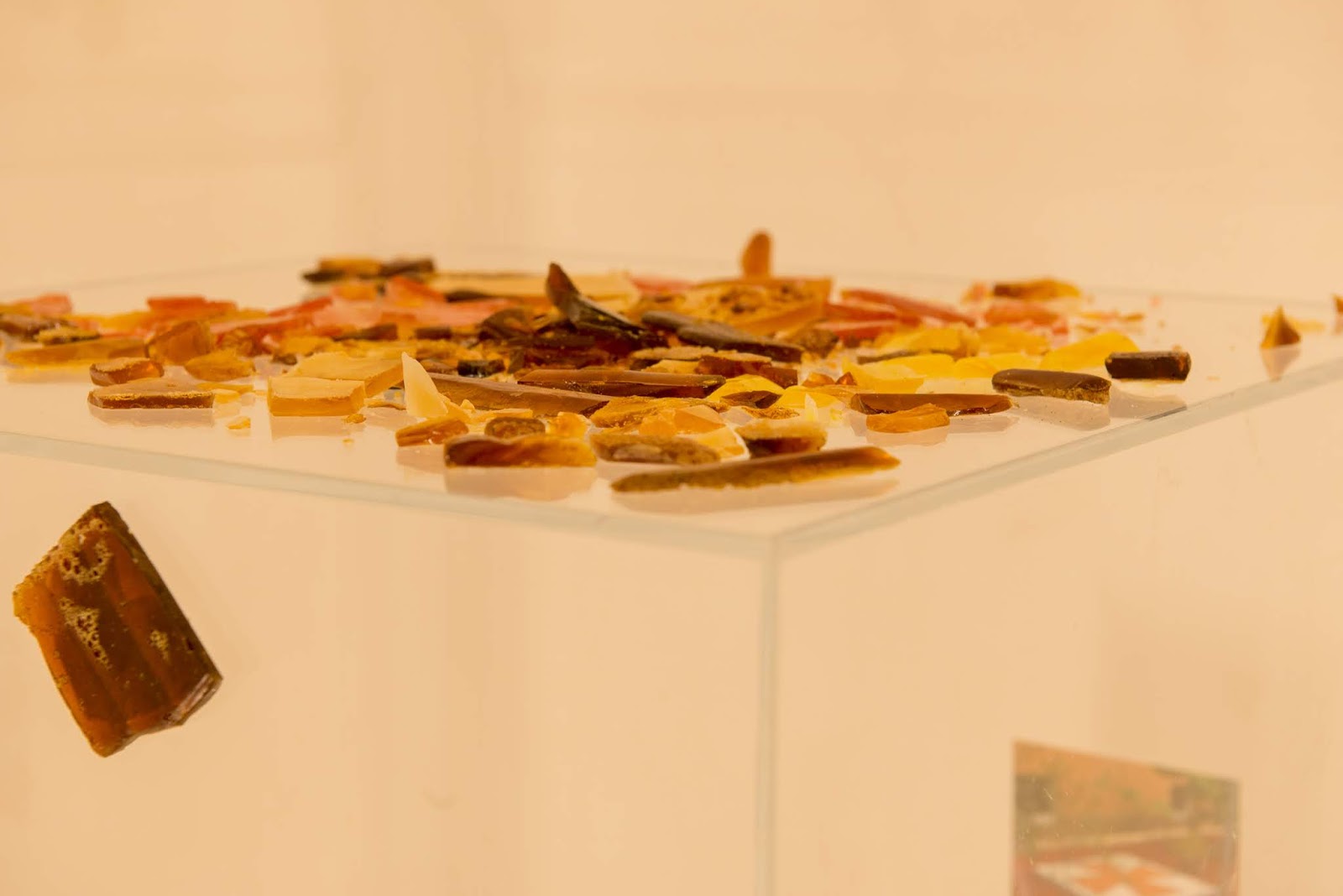 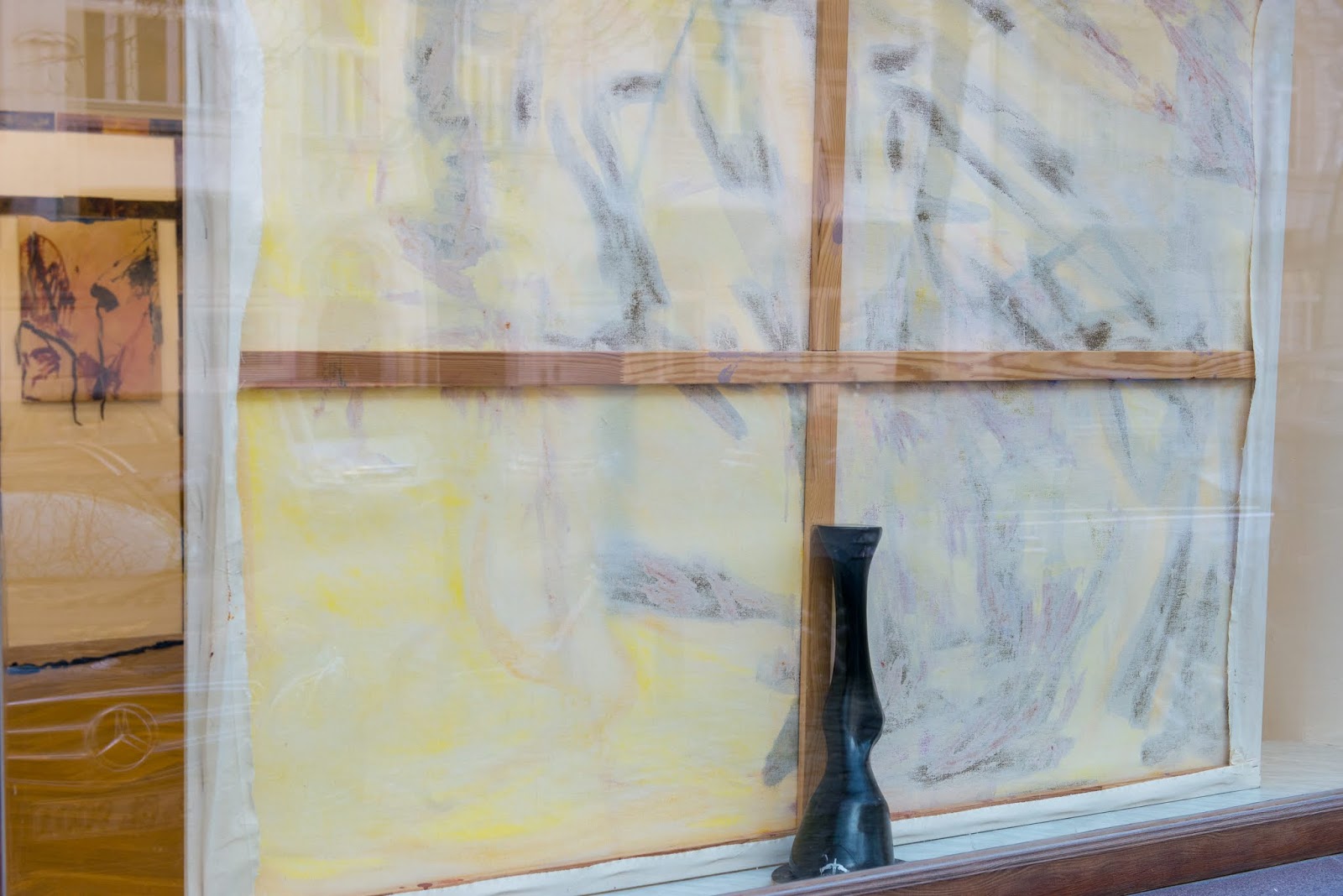 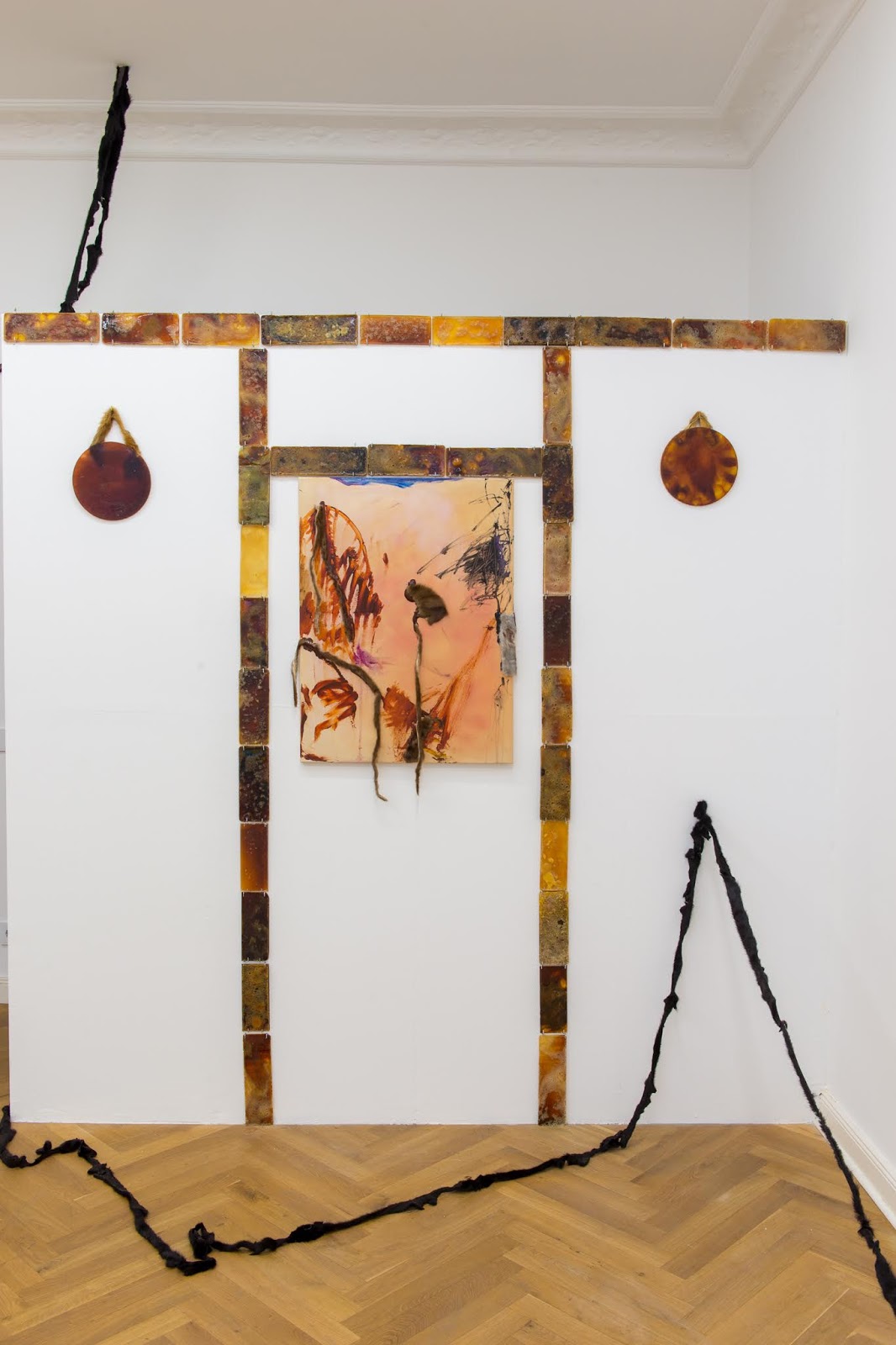 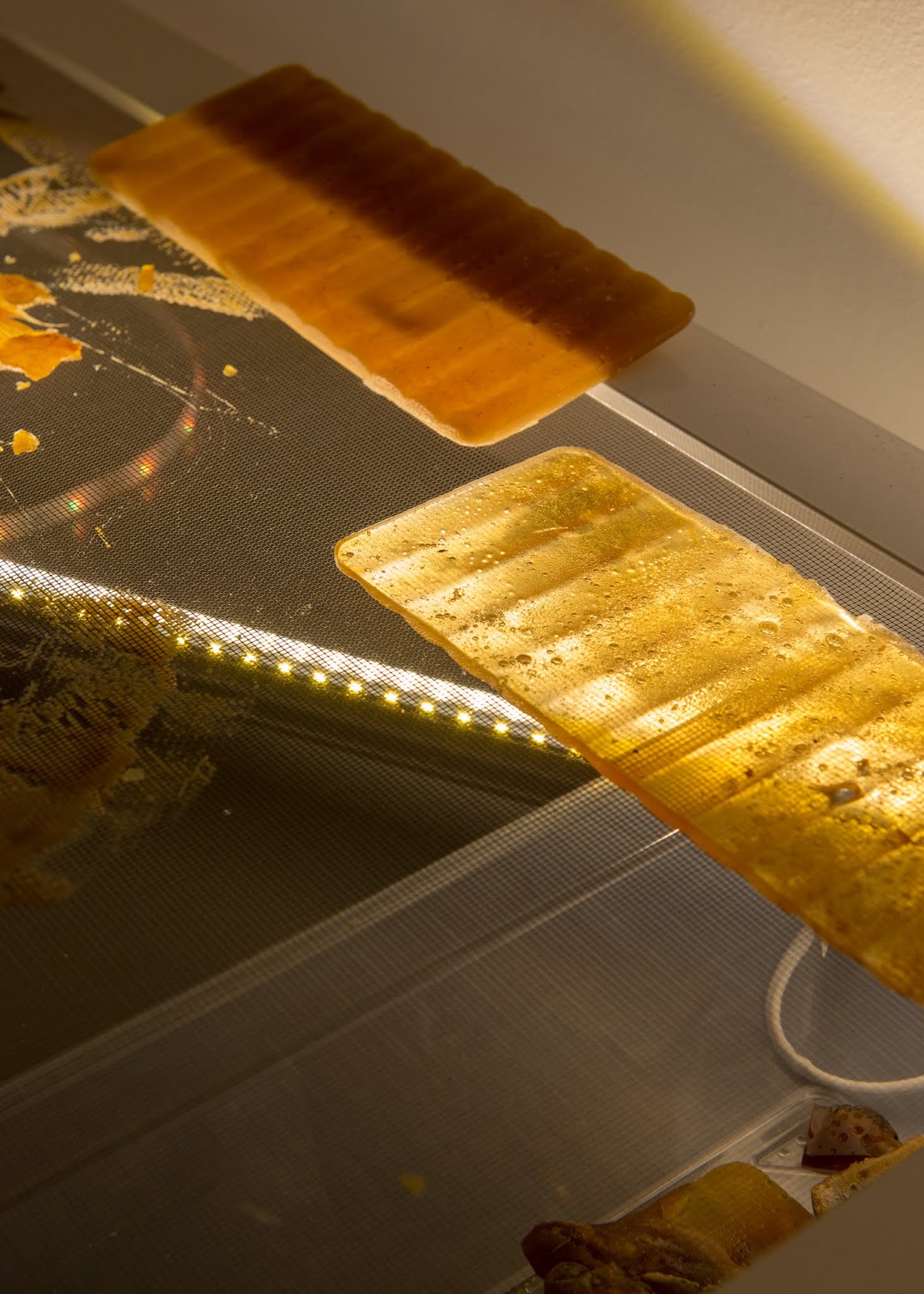 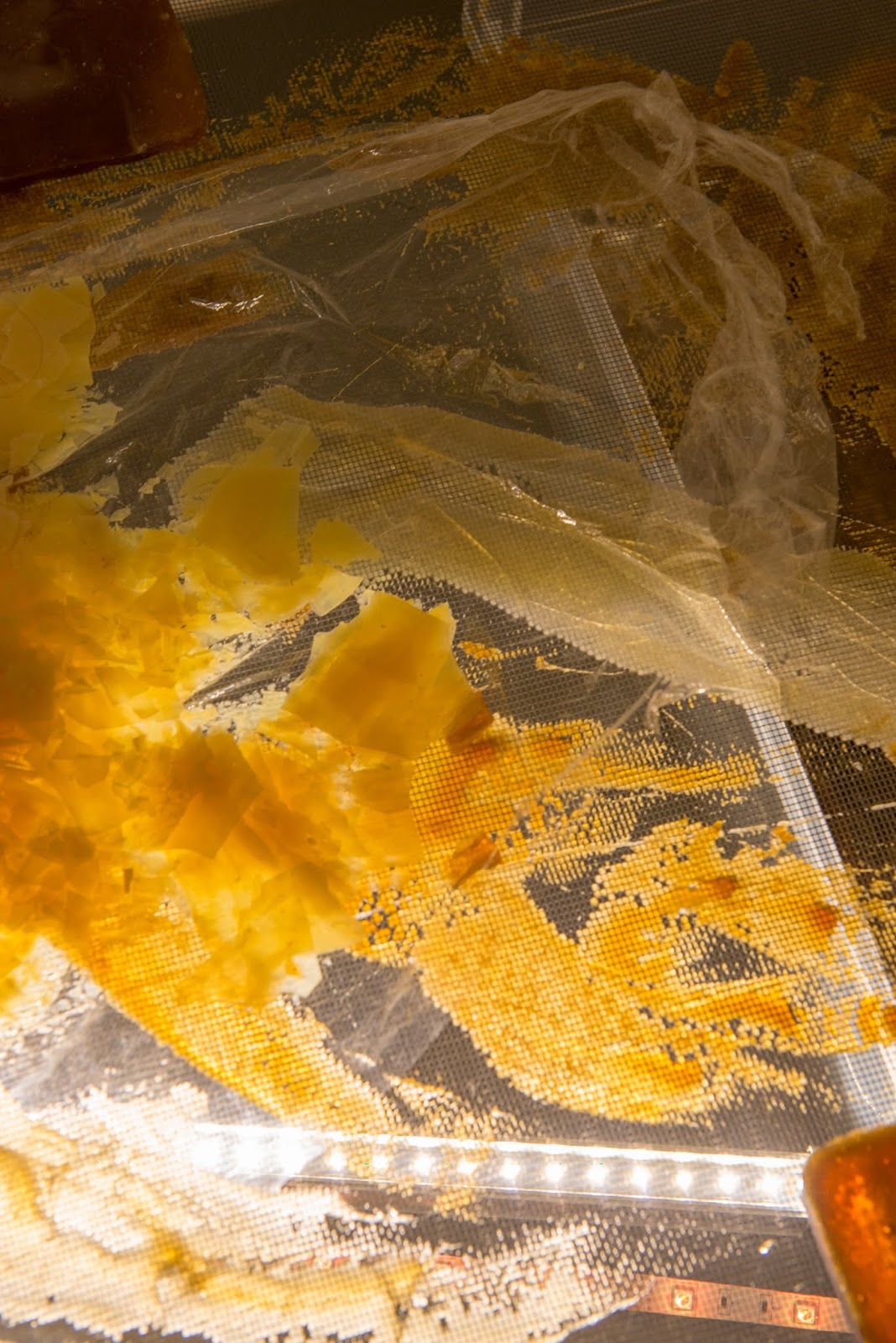 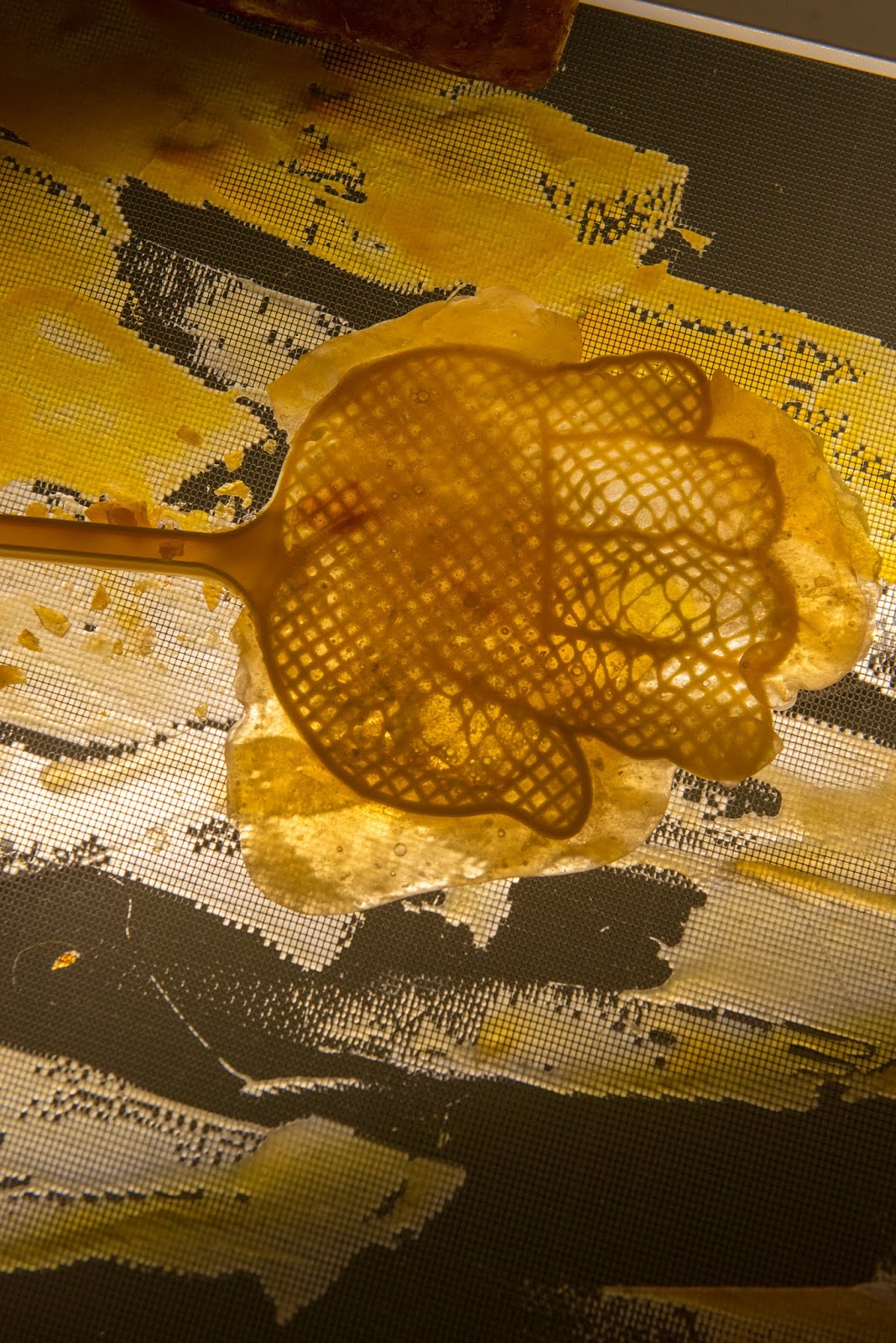 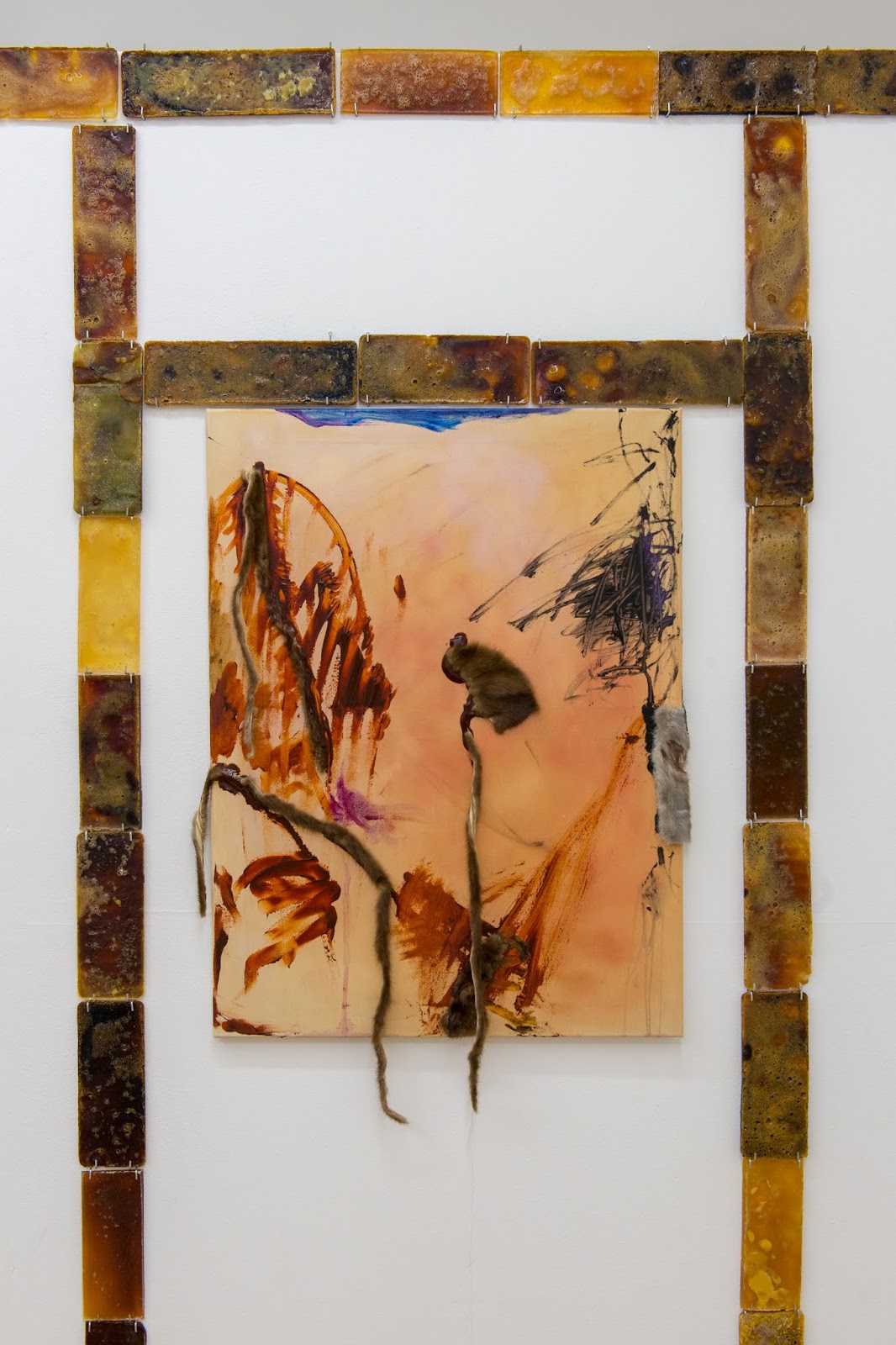 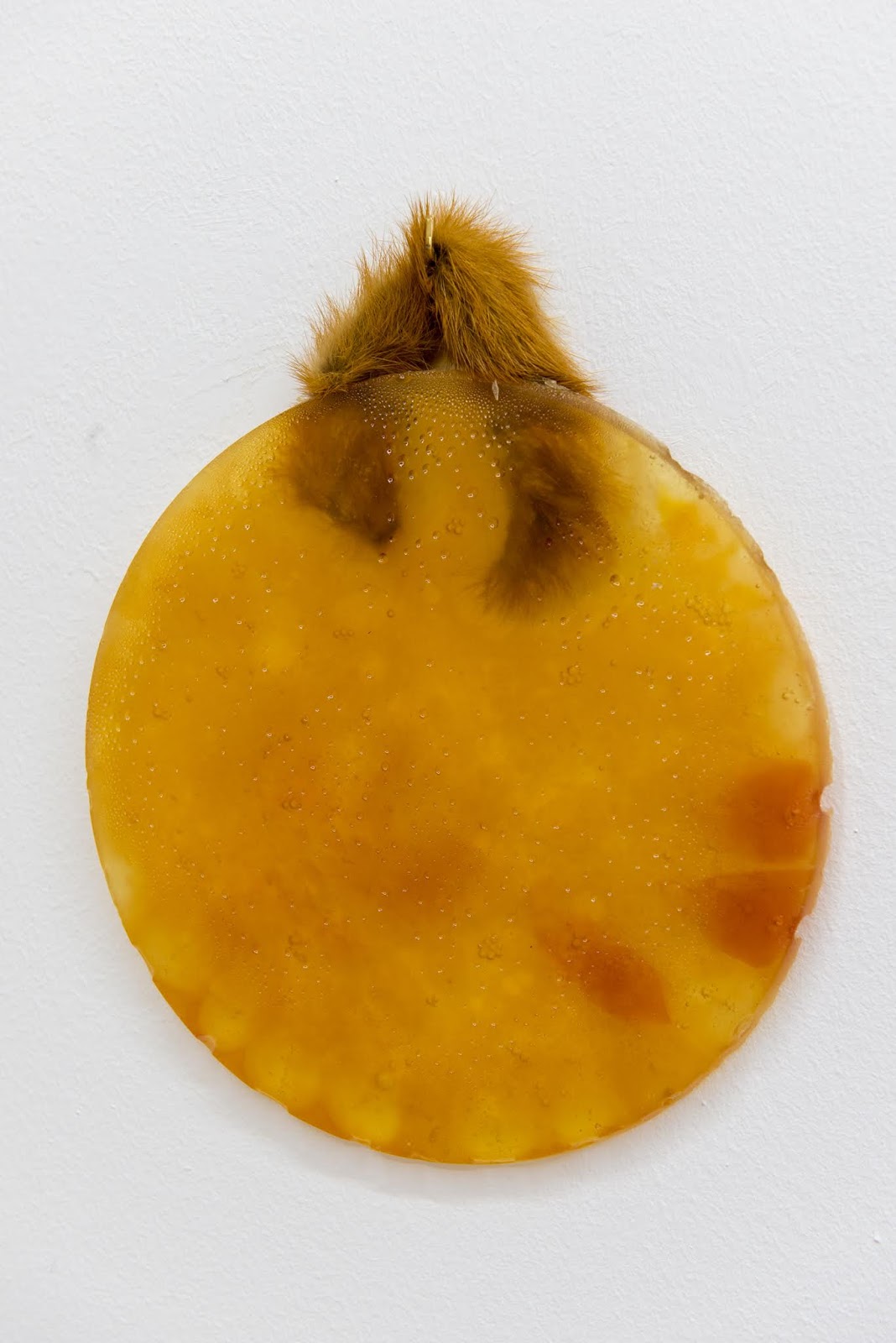 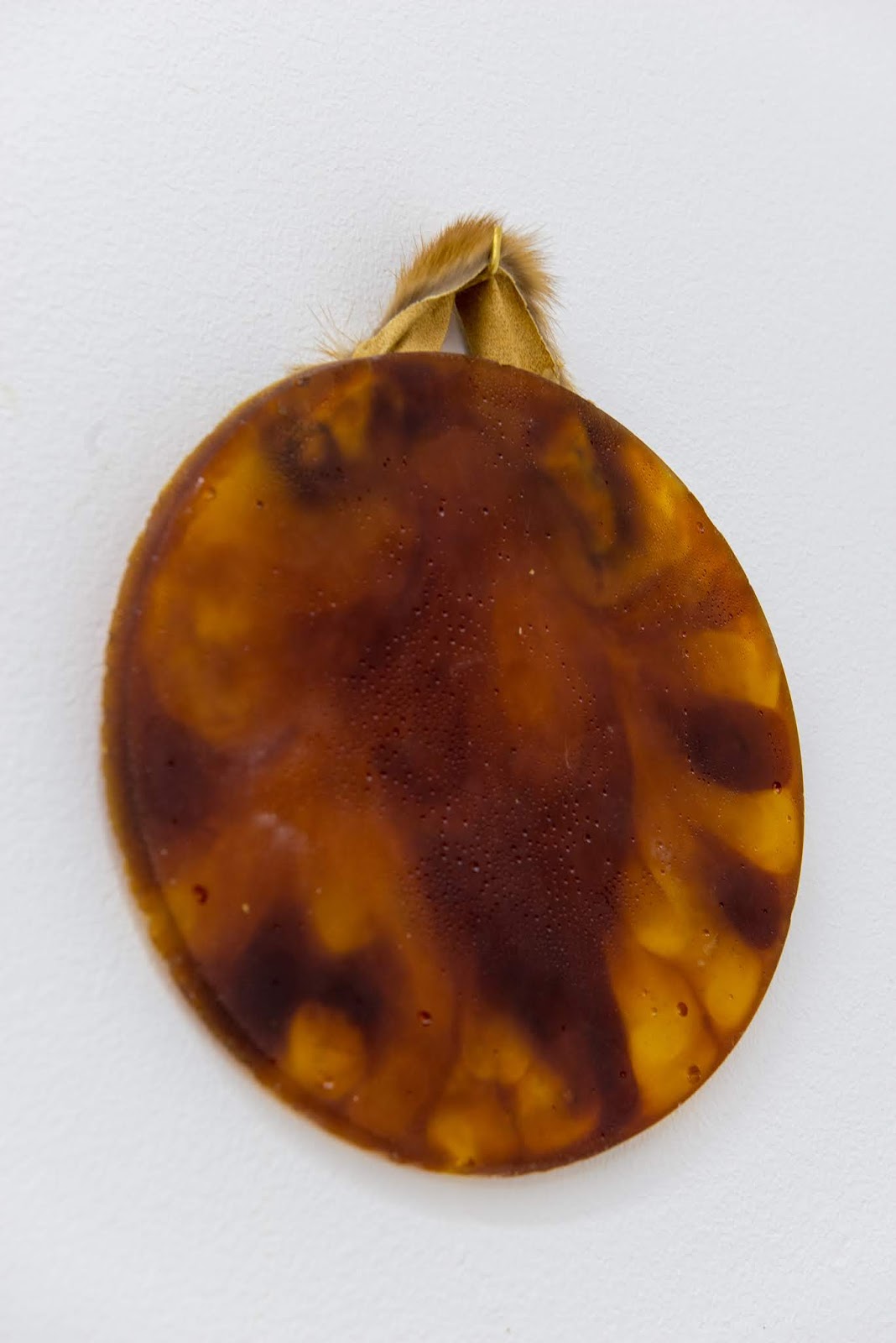 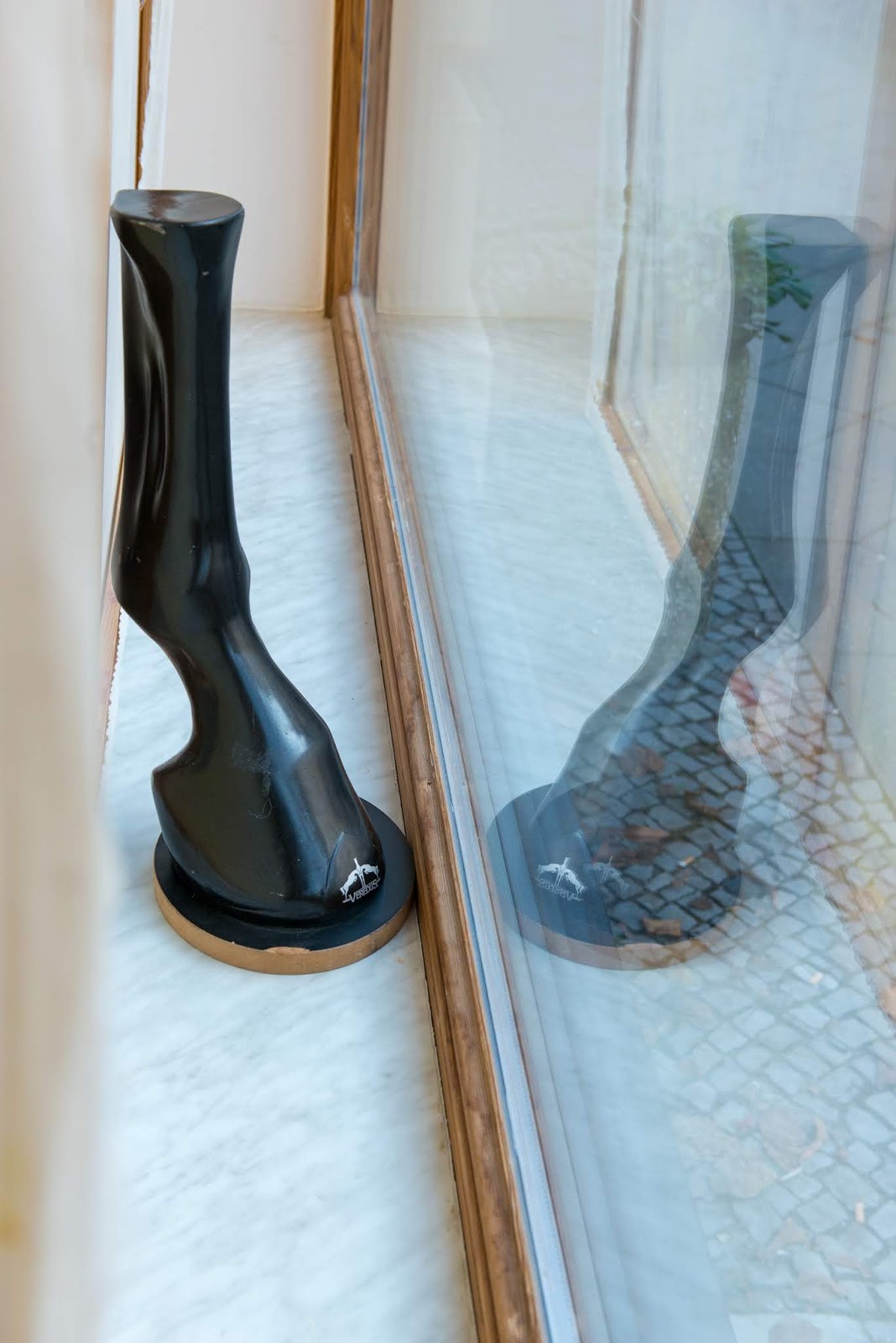 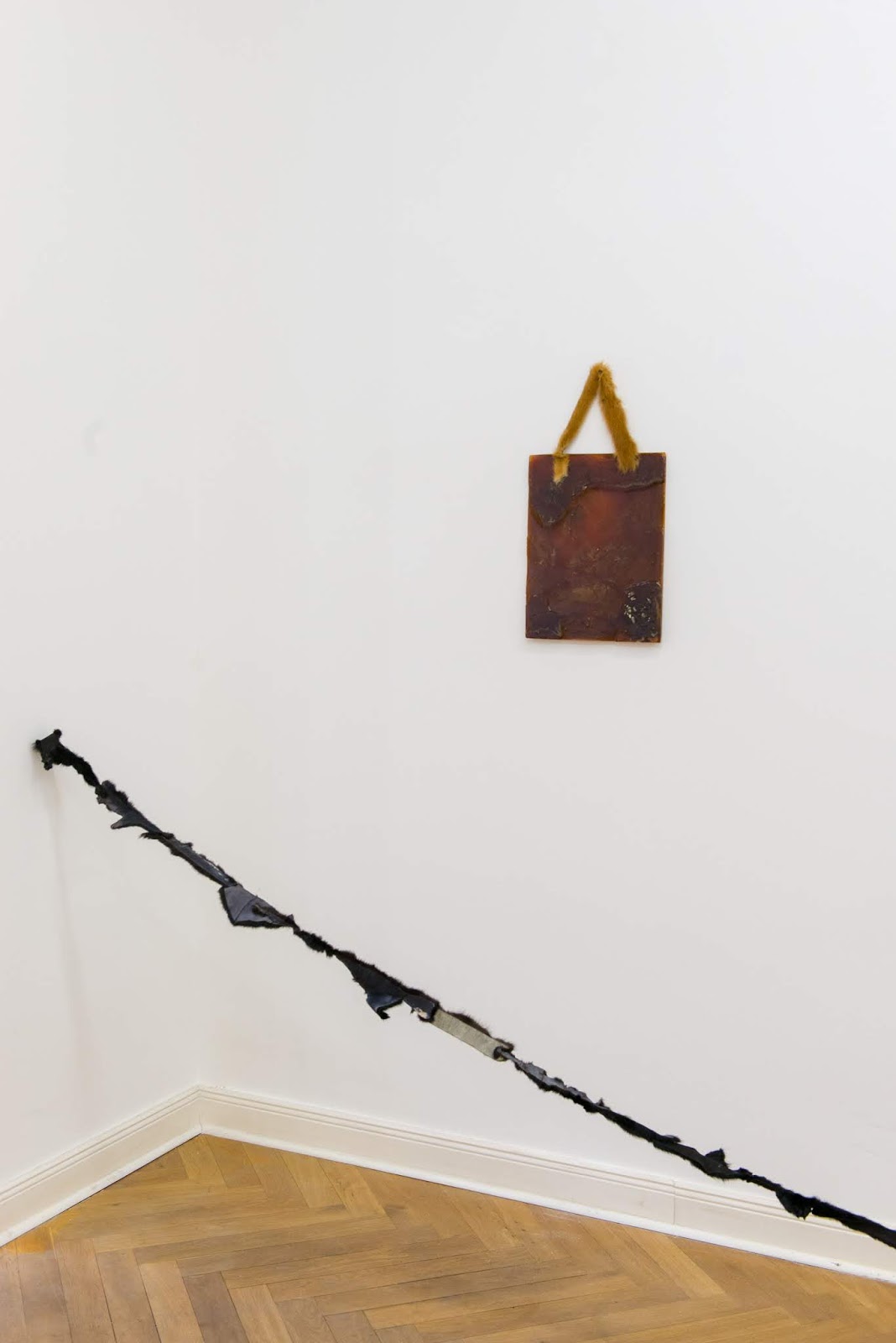 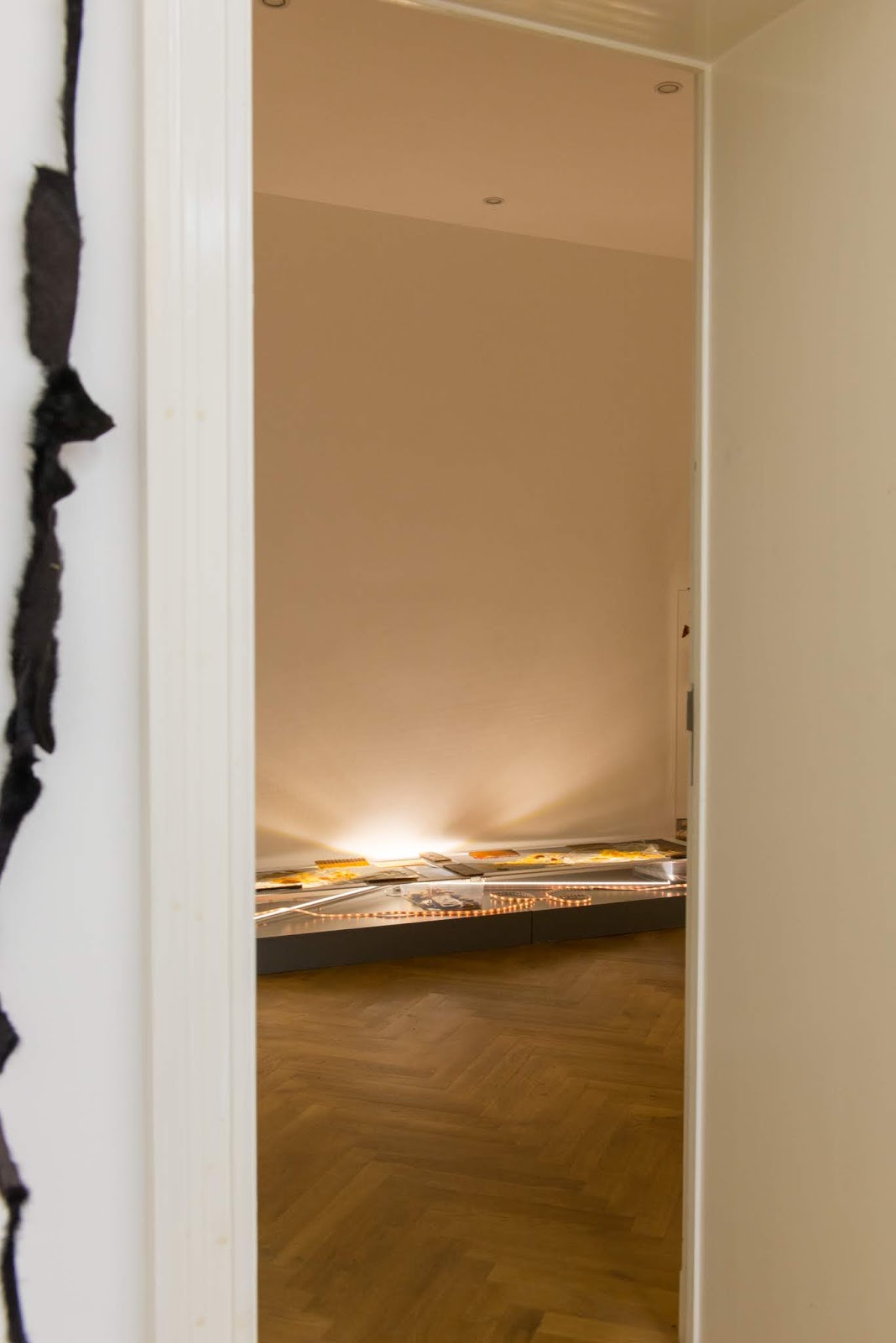 Images courtesy the artist and Mountains

Yana Tsegay’s solo show takes its title from the Amber Room, built in 1701 by Andreas Schlüter for the Prussian King Frederick William I in the Berlin City Palace. This magnificent room, which carries the will for representation, donation, spoils of war and robbery, has been relocated several times and considered lost since the end of World War II. In 2003 it was faithfully reproduced in the Catherine Palace in St. Petersburg. Cultural scientists are still trying to trace the myth of the Amber Room.
Yana Tsegay’s floor work Amber Plate (2019) is composed of window frames with flyscreens painted with melted sugar and complemented by objects cast with sugar and resin. The artist’s recurrent materials, including fur, leather, pigments and ceramics, are organic and natural materials which are part of the collection of materials from art history that revolves around the formation of myths. The canvases stand on self-built pedestals and feet and by this they take on the character of objects themselves and become part of the installation. They structure and define the exhibition space, as well as a fur string stretched across the room as a barrier tape. The gestural abstraction of the paintings (Amber Panel I-IV, 2019) seems primordial. The almost archaic composition of the pictures is determined by formlessness with earthy colors and contains borrowings from prehistoric cave painting, which – with the Lascaux Caves – is considered the origin of art. ”Prehistoric” or “primitive” are terms that are used by the supposedly Western world to talk about “the other” and to demonstrate superiority.
Thus, in terms of cultural history, Yana Tsegay spans the arc from that first form of artistic expression to institutionalized and representative so-called cultural treasures such as the Amber Room, which always raise the question of cultural appropriation, expropriation, the appropriation of raw materials, and demonstrations of power. These questions are intensified in Yana Tsegay’s self-referential performances – with the aim of dissolving the privileges and hierarchies of the institutional contexts in which the artist works.