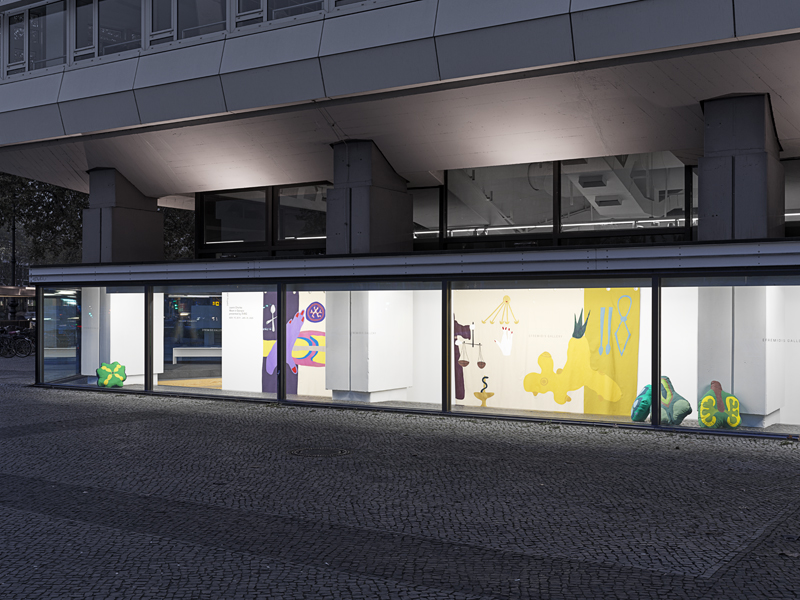 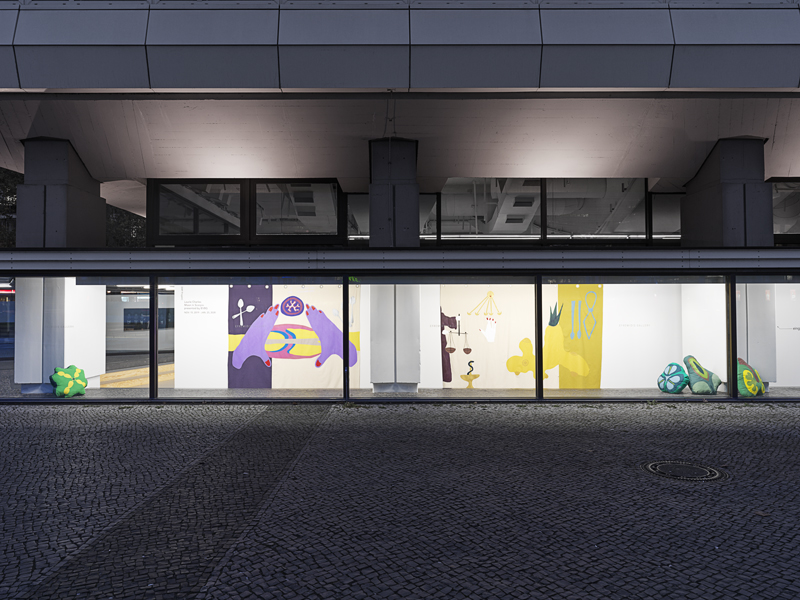 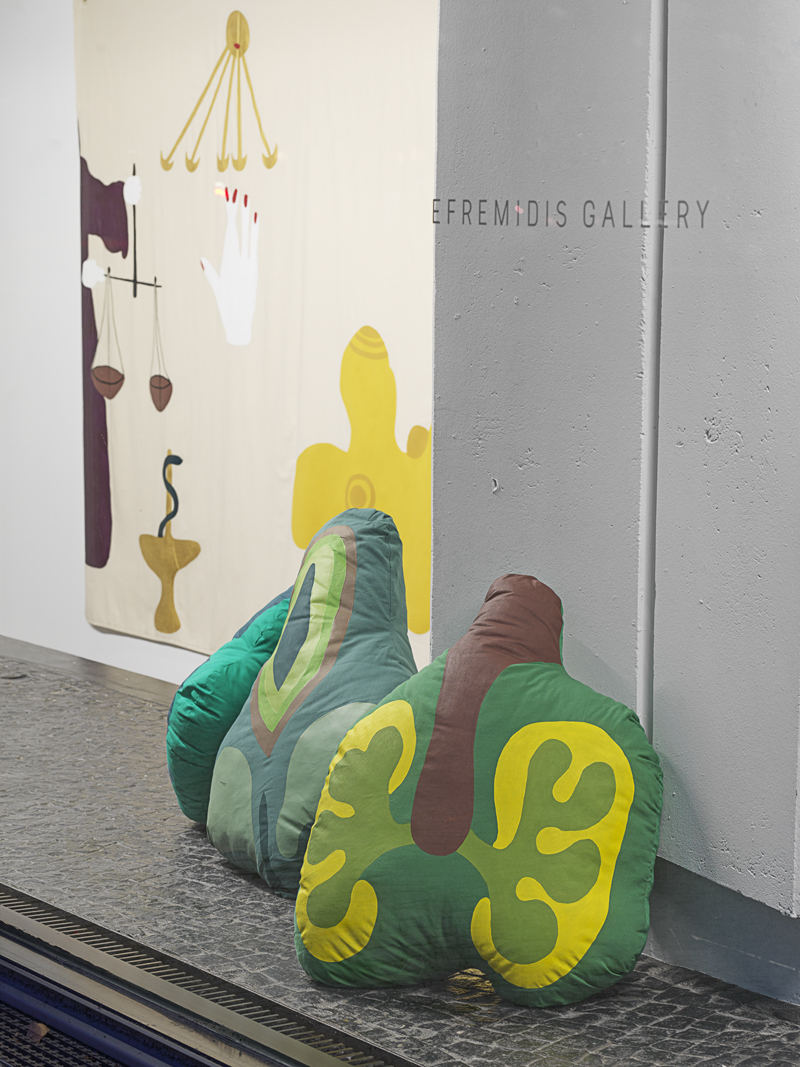 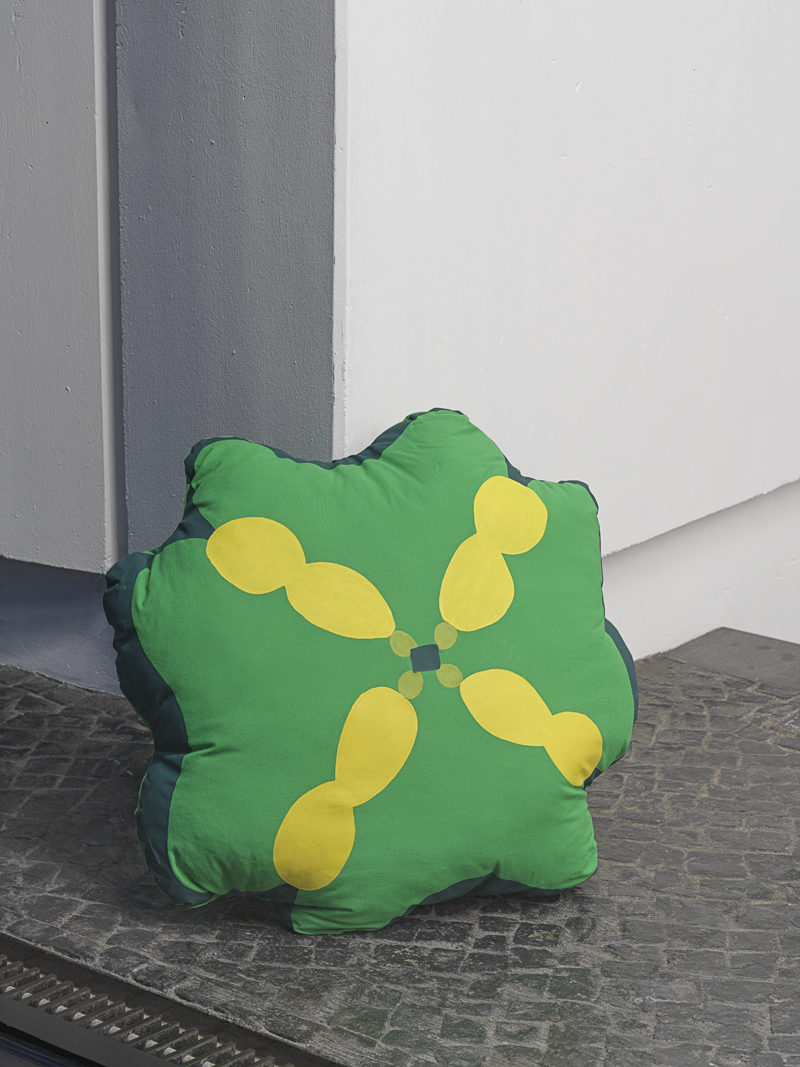 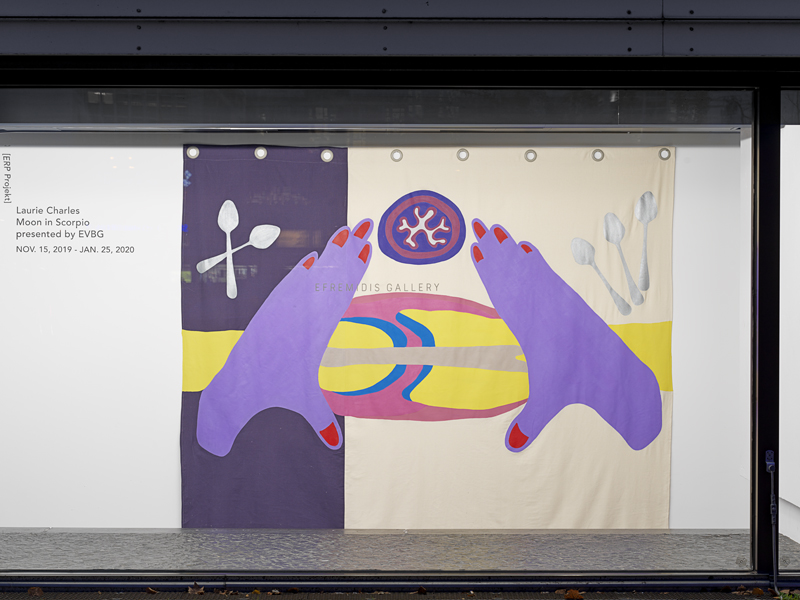 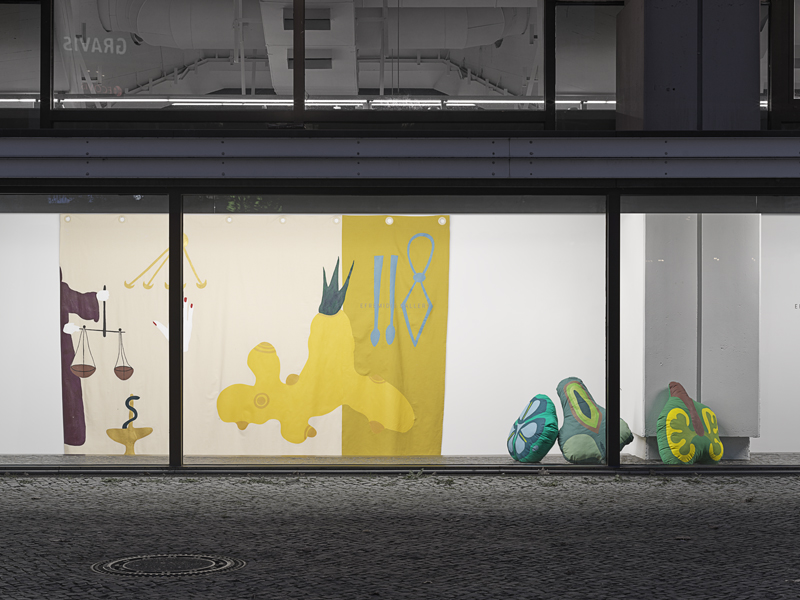 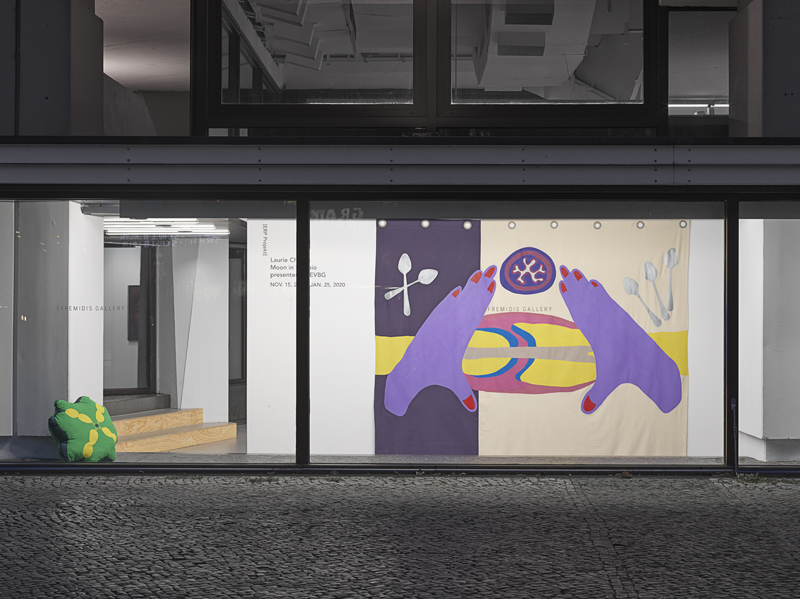 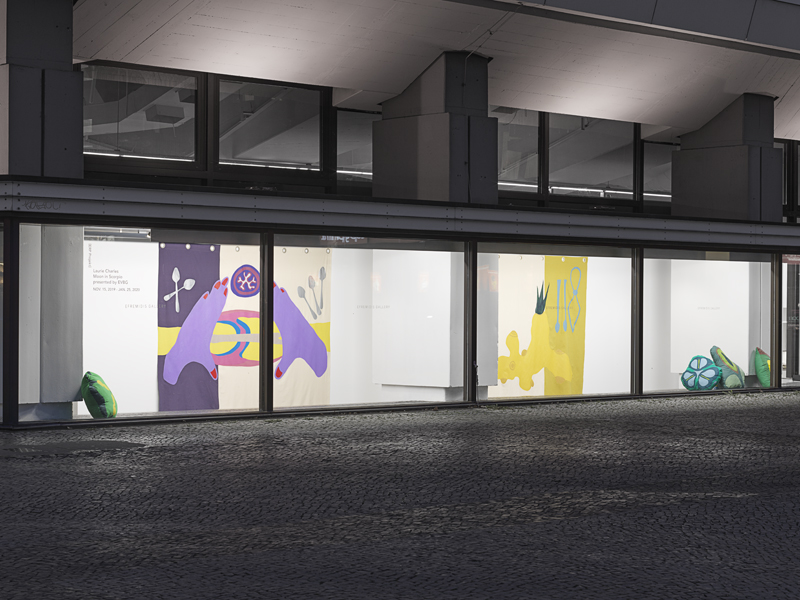 EVBG and Efremidis Gallery are happy to present a solo exhibition by Brussels-based artist Laurie Charles (*1987, Belgium). Working in film, writing, painting and installation, Charles creates speculative narratives by interweaving stories and histories, drawing on fiction, folklore, humanities and science. For “Moon in Scorpio”, a textile environment of hand-painted pillows and curtains, Charles concerned herself with the historical linkage of health and gender.
In the window space of Efremidis Gallery, we see a group of soft sculptures, large enough to sit on, their cottony texture inviting touch. These hand-sewn, hand-painted pillows reference anatomical drawings of plants, their microscopic insides magnified, but they also call to mind the shape and structure of the female sex organs. Inhabiting a space in between domestic coziness and sculptural quality, inside and outside as well as human and nonhuman, the pillows are not least reminding us of the undeniable kinship between people and plants.
Charles’ curtains of the series “Pharmakon” tell a speculative herstory of medicine. Sprawled on the fabric rather than arranged in chronological or serial order, the various images and symbols in popping colors draw on and interconnect personal, mythological and historical stories of female health and healing: The moon represents the lunar cycle, which is closely linked to the menstrual cycle; the snake is an ancient symbol for fertility, the bowl with a snake coiled around on the other hand is the internationally recognized pharmacy sign; the image of big purple hands with red-painted nails surrounding a joint is reminiscent of the healing power of the laying on of hands; ginger, spoons, scales, and herbs can be read as general plant-based medical imagery, but they are also direct references to the artist’s extensive theoretical and literary research on witchcraft, wellness, (female) health and illness.
What ultimately lies on the core of “Moon in Scorpio” are reflections on the notions of “health“ and “sickness“ that are in turn fundamentally and inextricably linked to gender as well as to understandings of what makes a happy and worthy person. Our contemporary society values productivity, a healthy body is hence a body which works, a body which is capable, a body which functions in all senses of the word. Anybody and any body that deviates from this normative status of health is by definition sick and in urgent need to be fixed. In her “Sick Woman Theory“, Johanna Hedva makes a point in turning this logic around by formulating a powerful plea: “You don’t need to be fixed my queens – it’s the world that needs the fixing.“ Being sick, then, can be rethought not as the direct opposite of being healthy, but rather as another state of being, namely one in which our body and our organs act up and “revolt“ against their own silence, as anatomist and physiologist Marie François Xavier Bichat (1771-1802) put it centuries ago. It is once our body is not “working“ properly anymore that we become aware of it, that we can get back in touch with it, tend to it, and, somehow paradoxically, might feel more human than we did before. It is then that we can ask: What is it that makes us sick?
Tags Berlin, Efremidis Gallery, EVBG, Laurie Charles, Lazy exhibitions
Newer Post Older Post Home