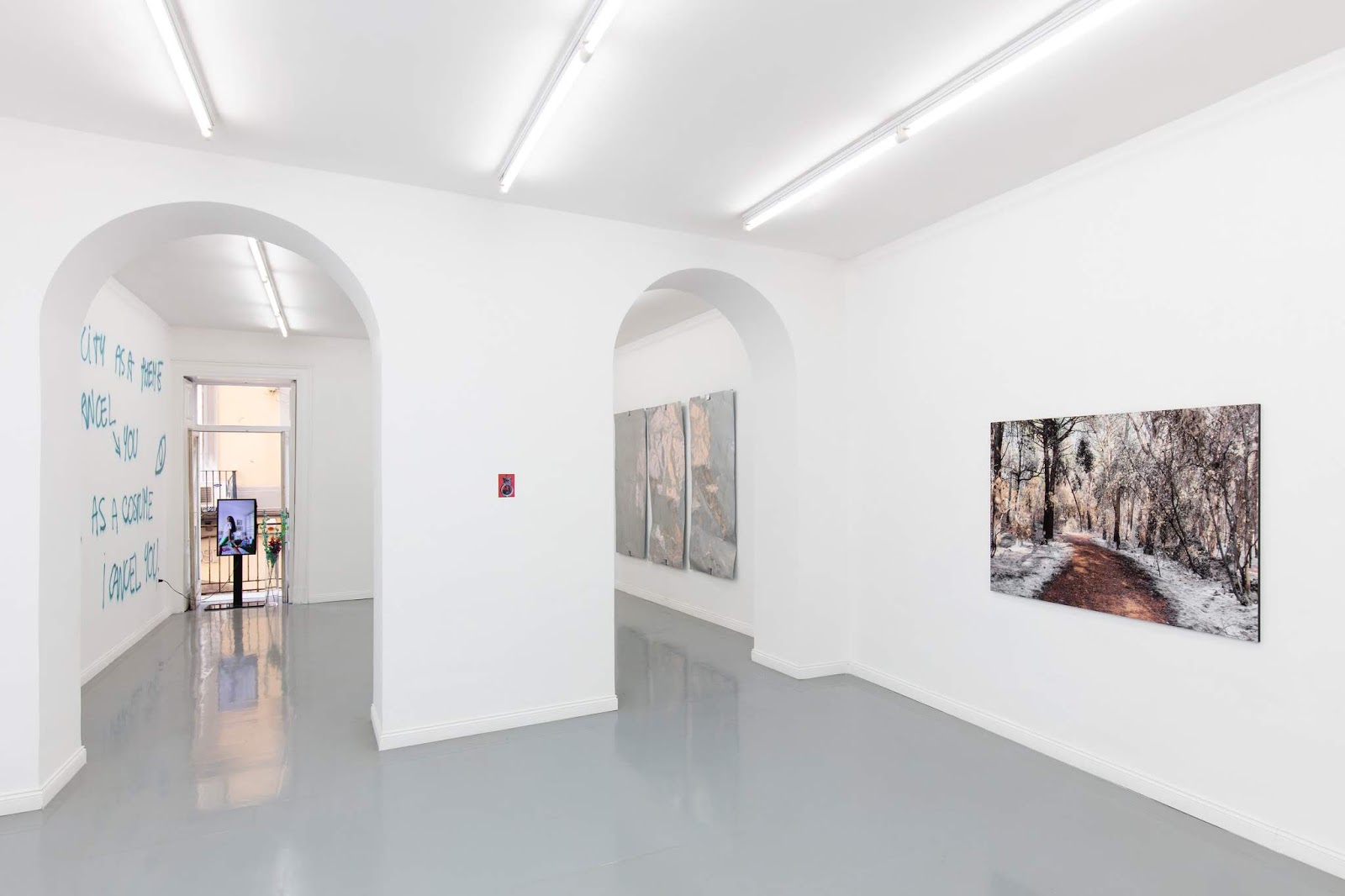 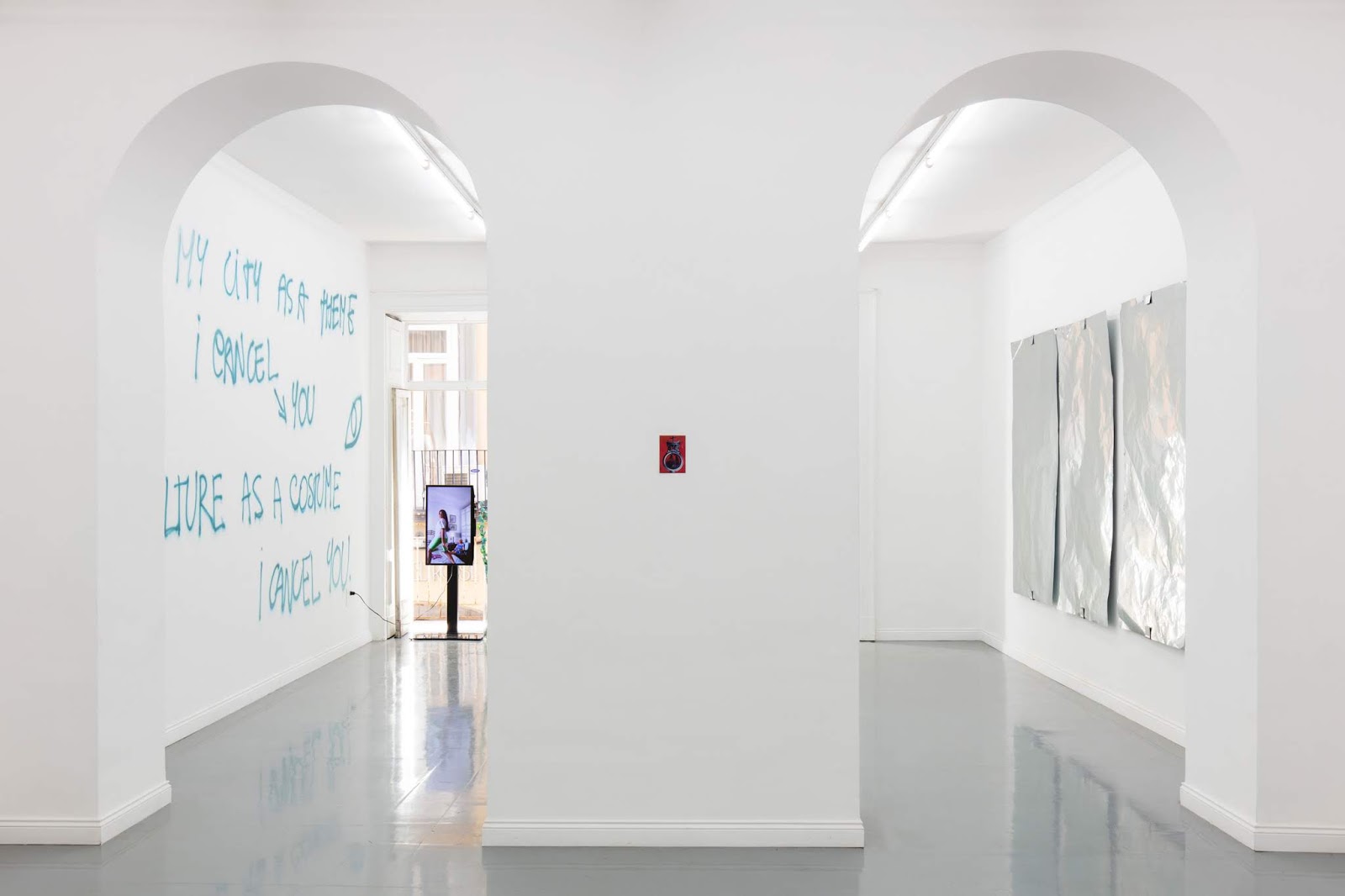 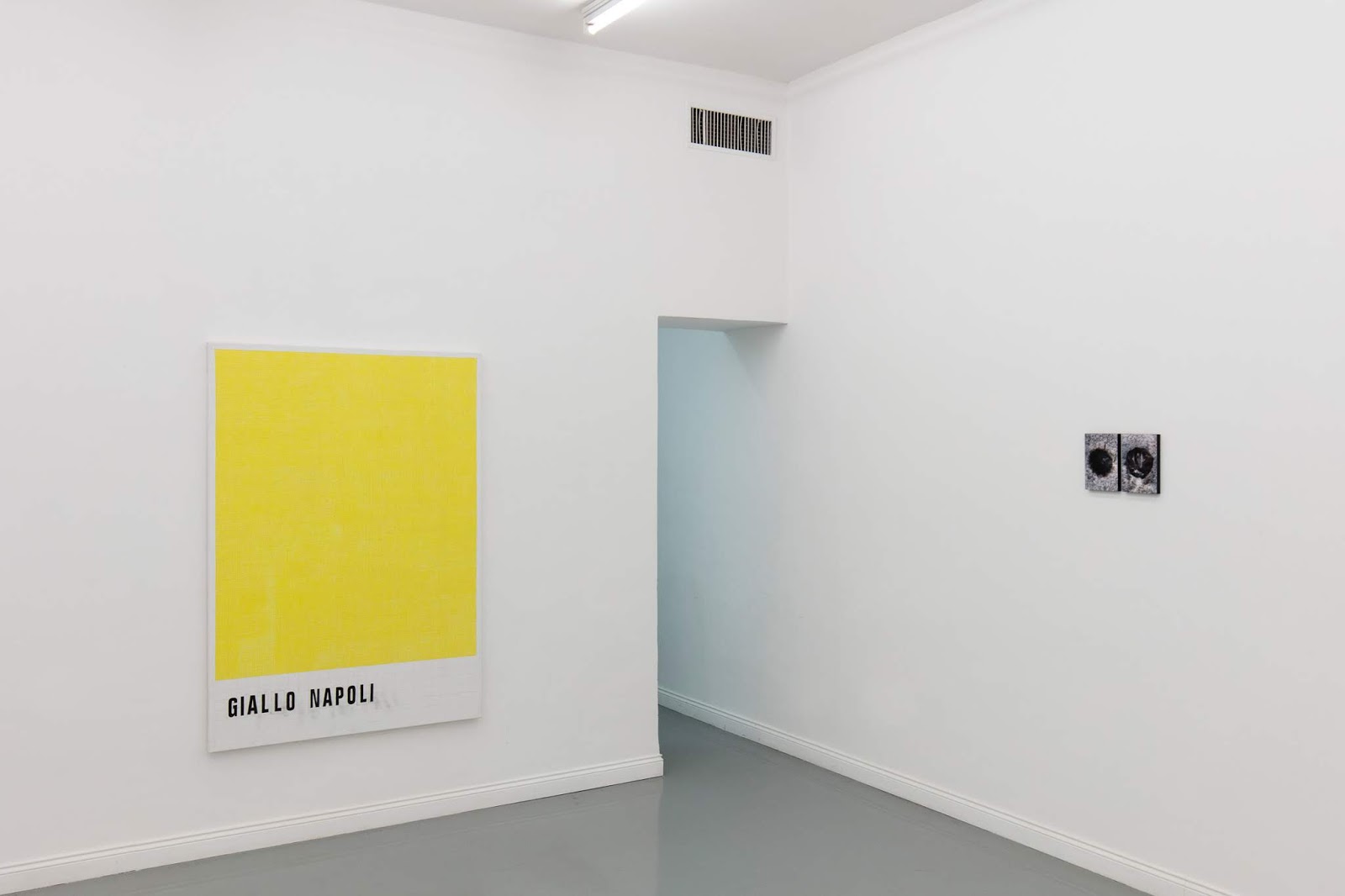 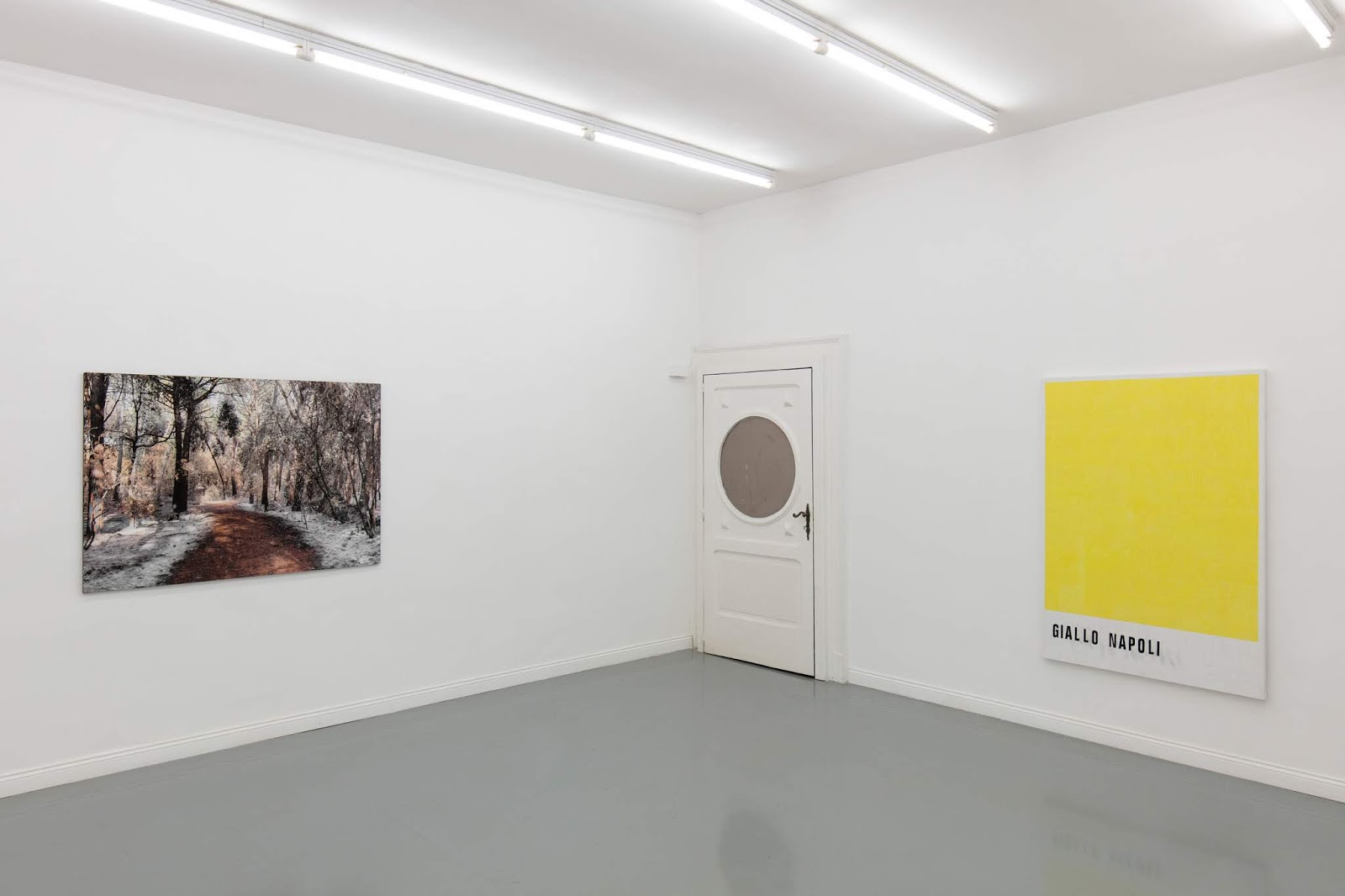 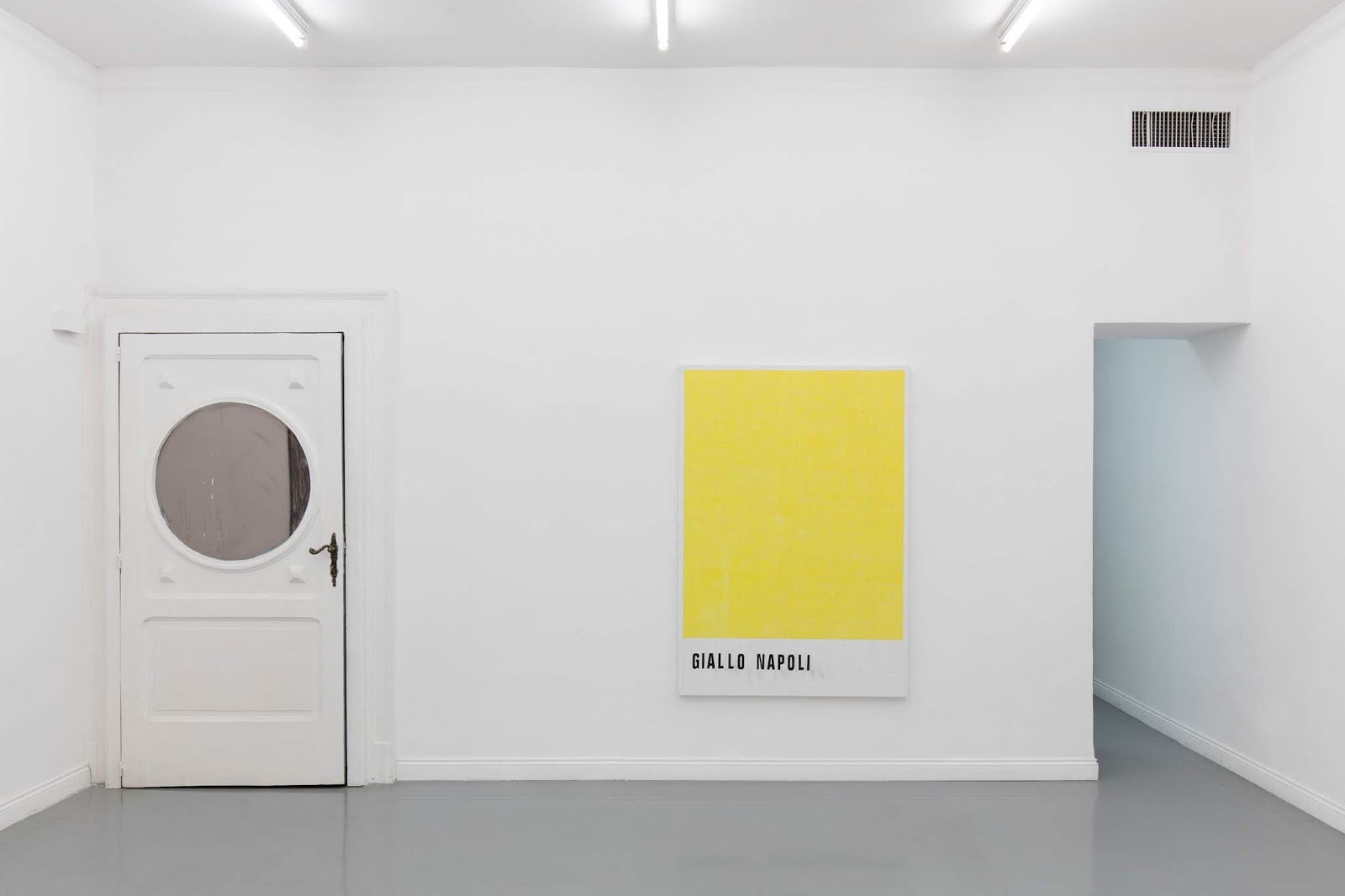 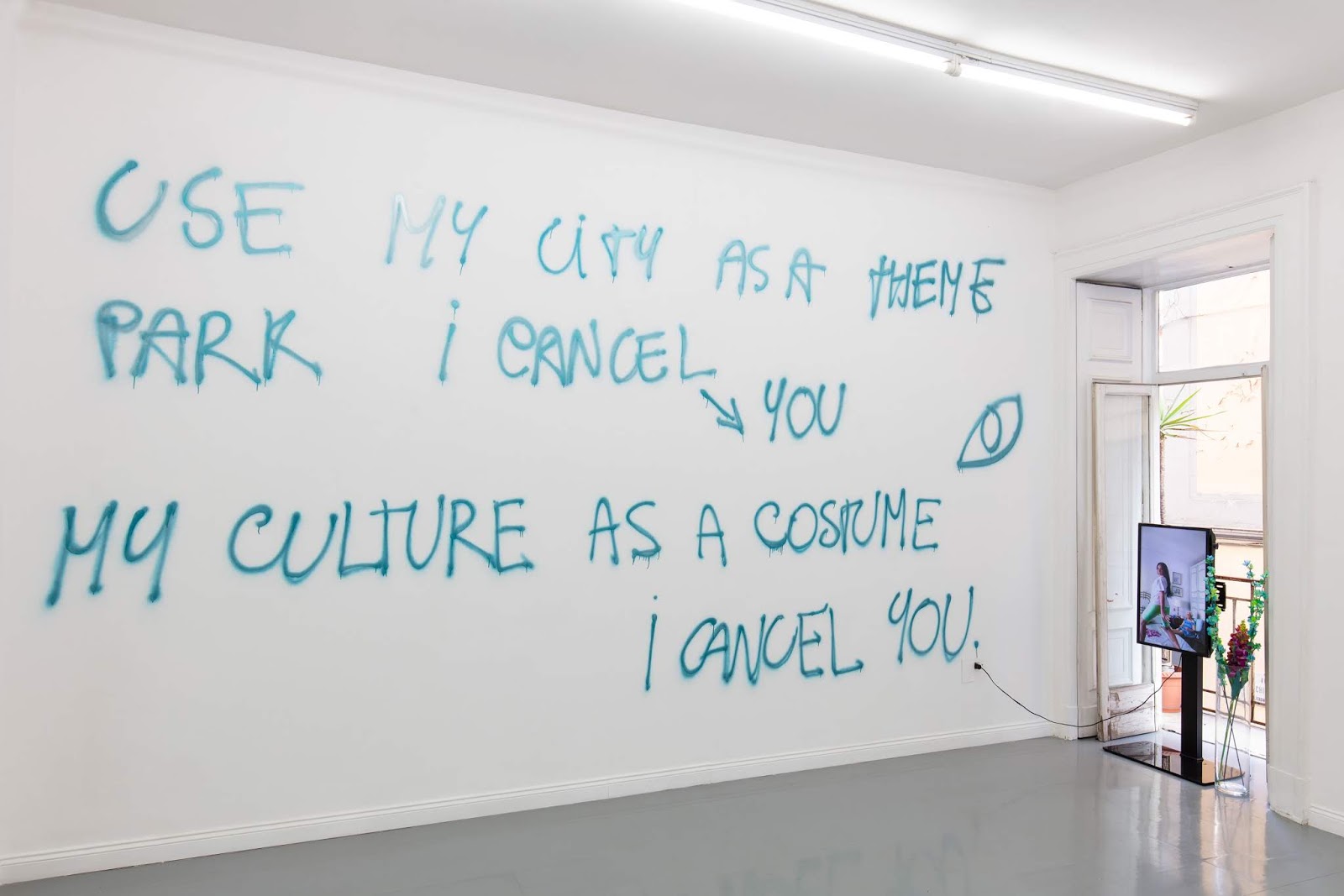 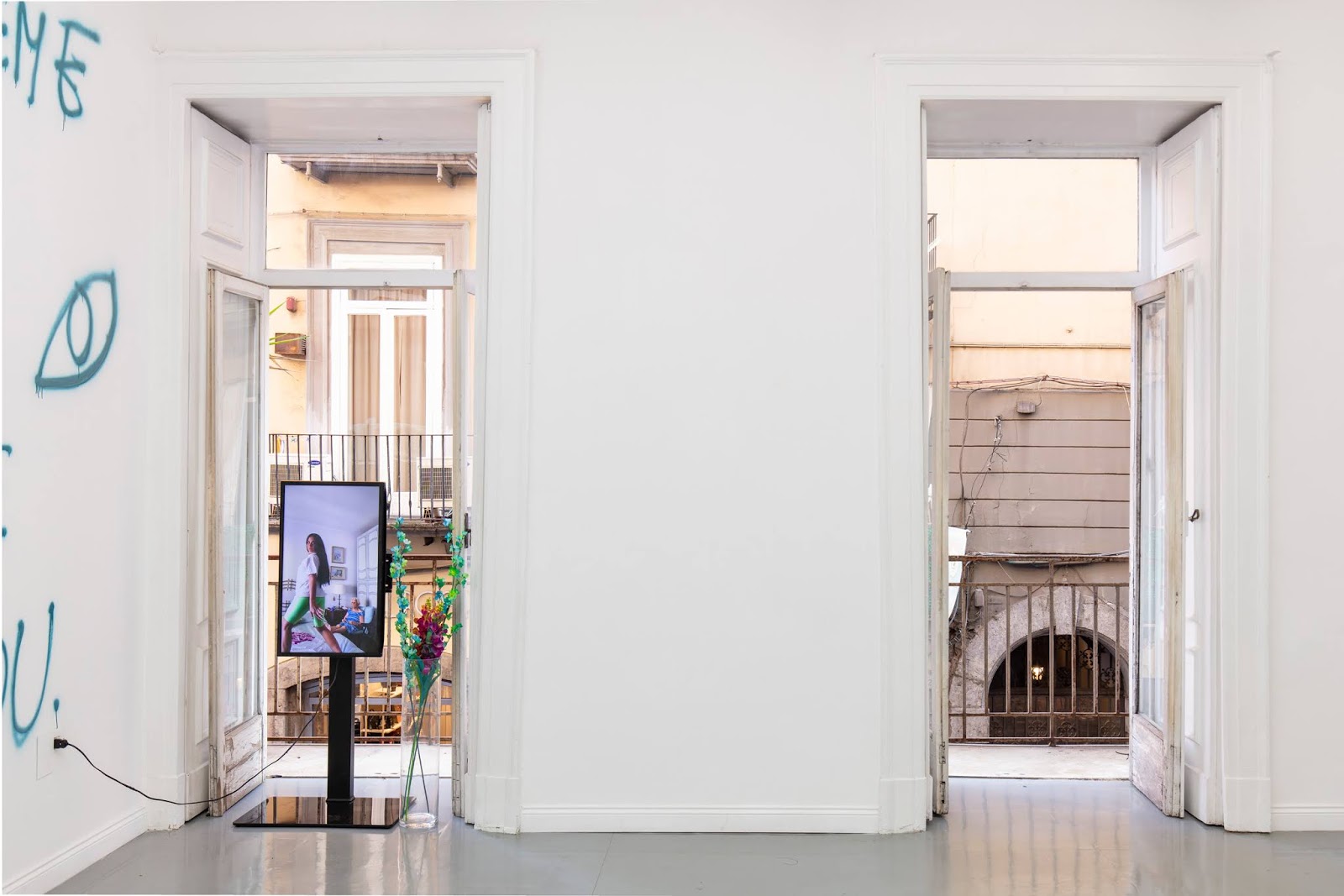 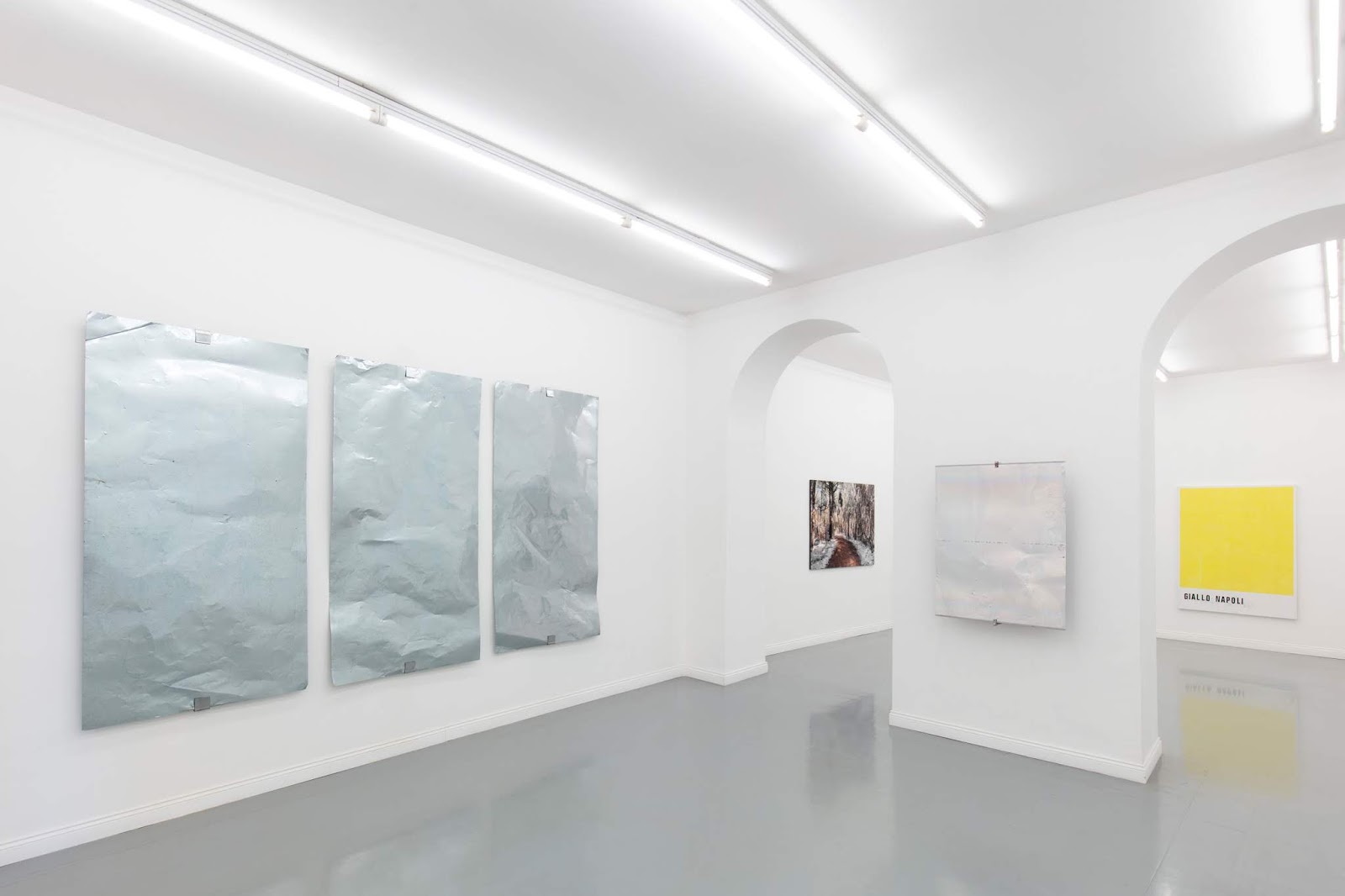 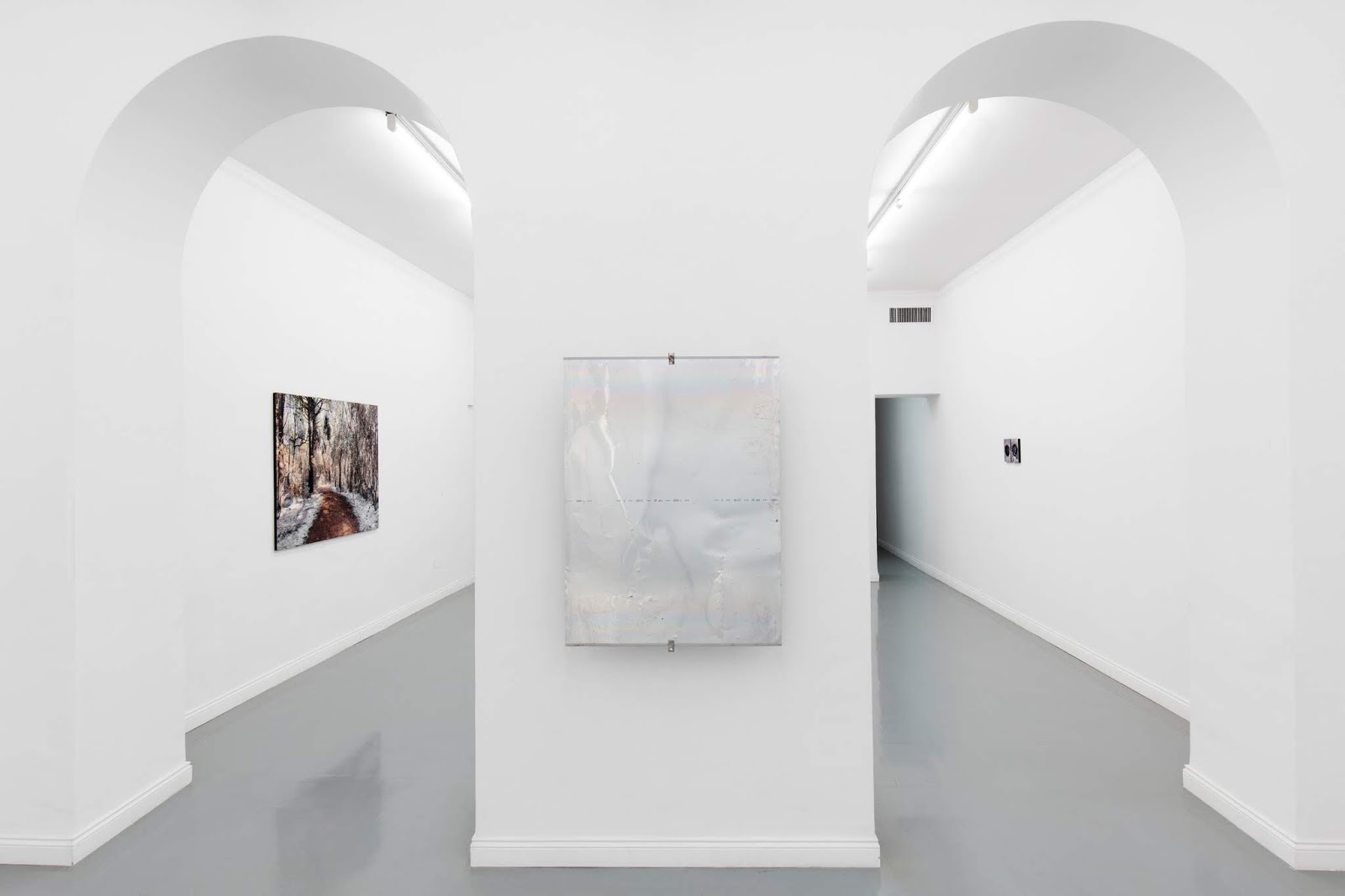 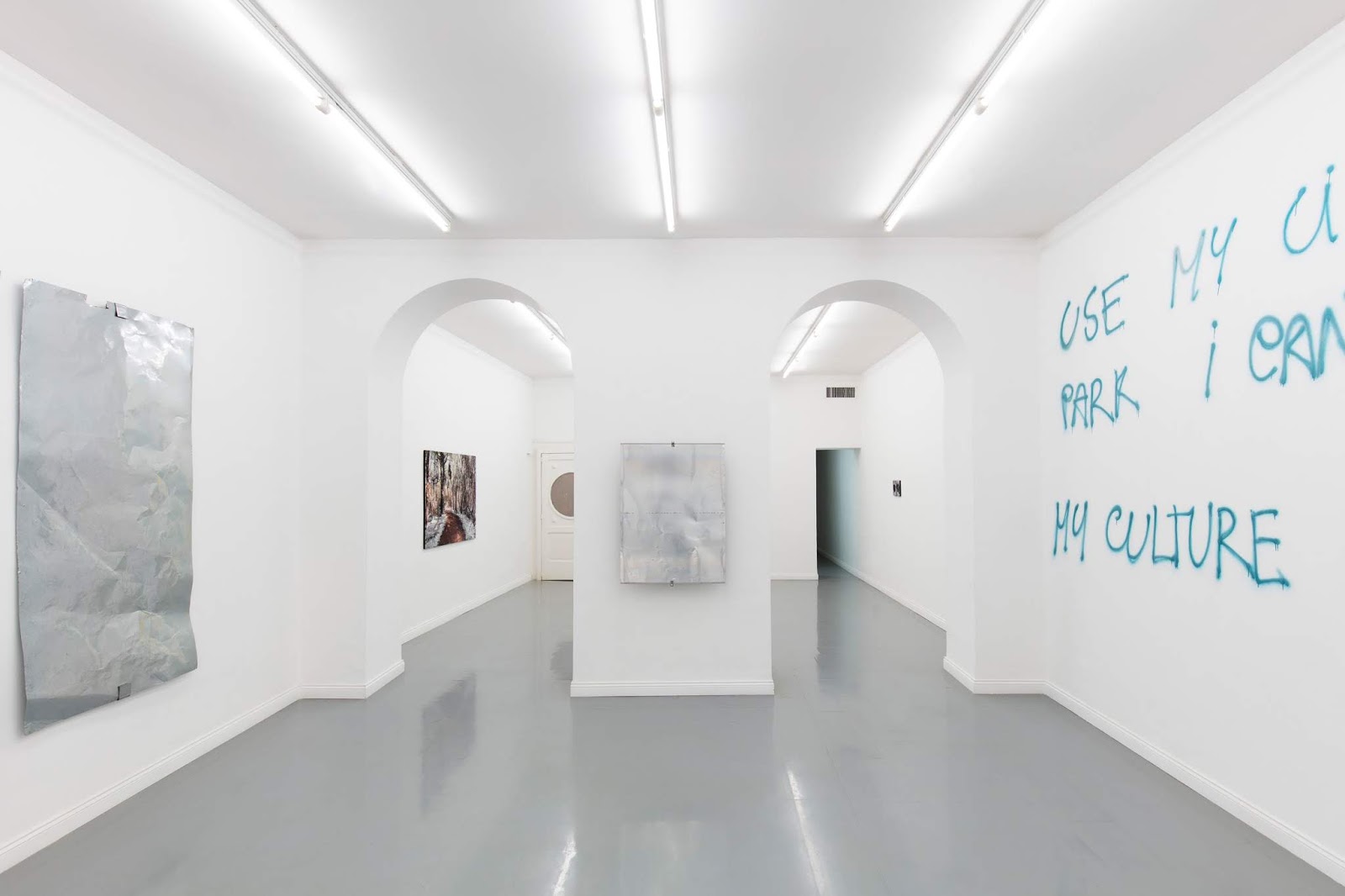 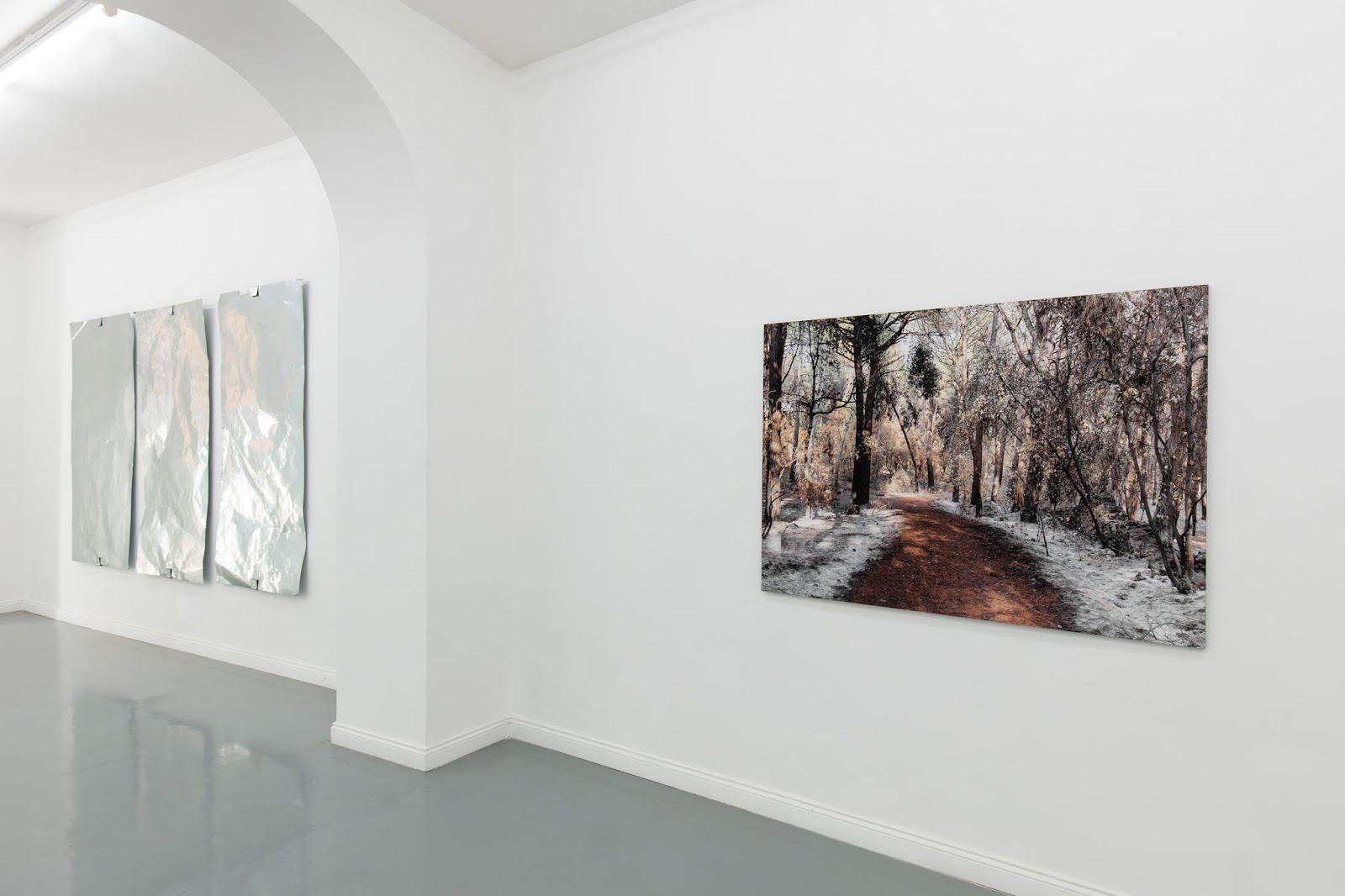 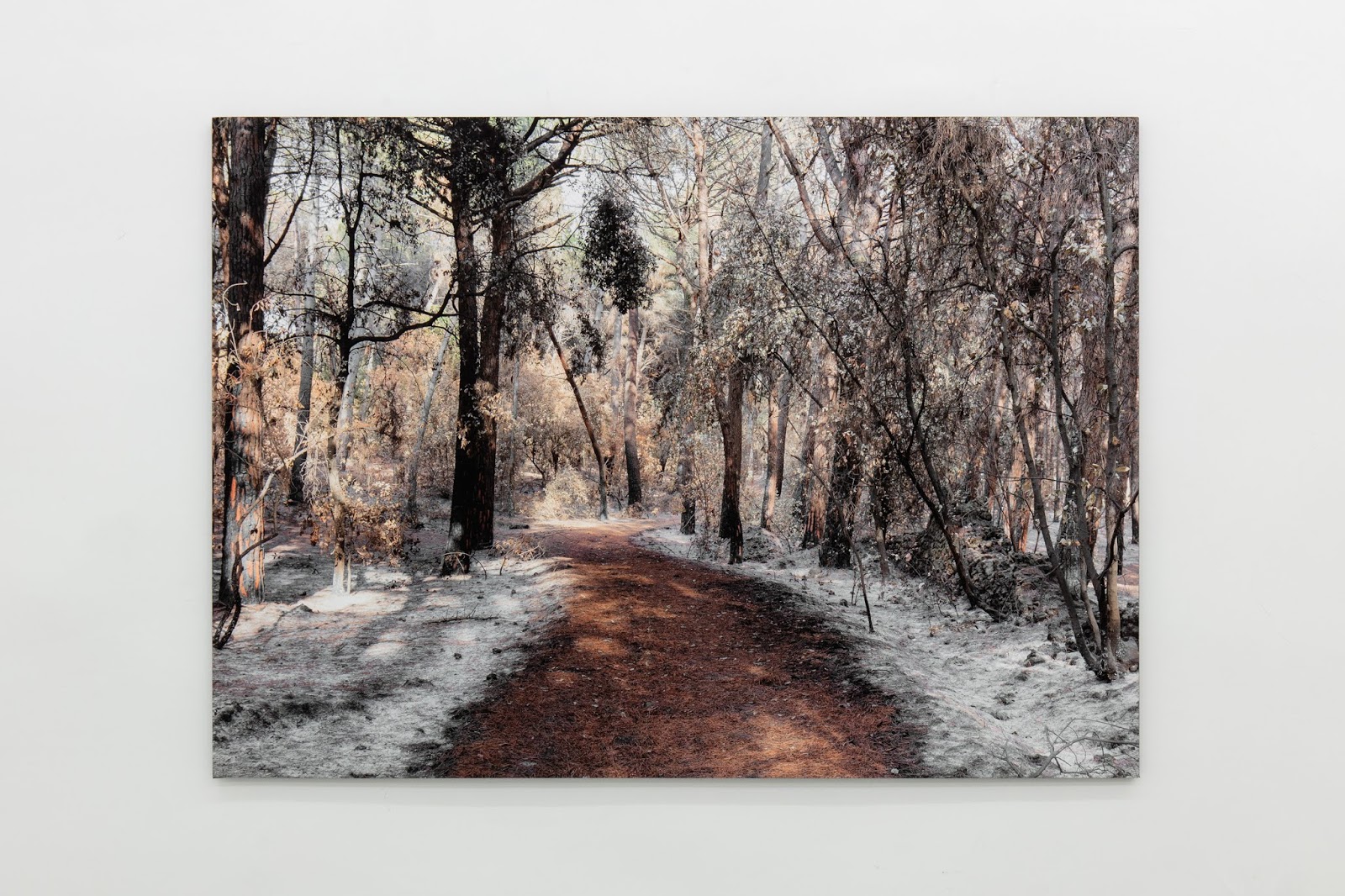 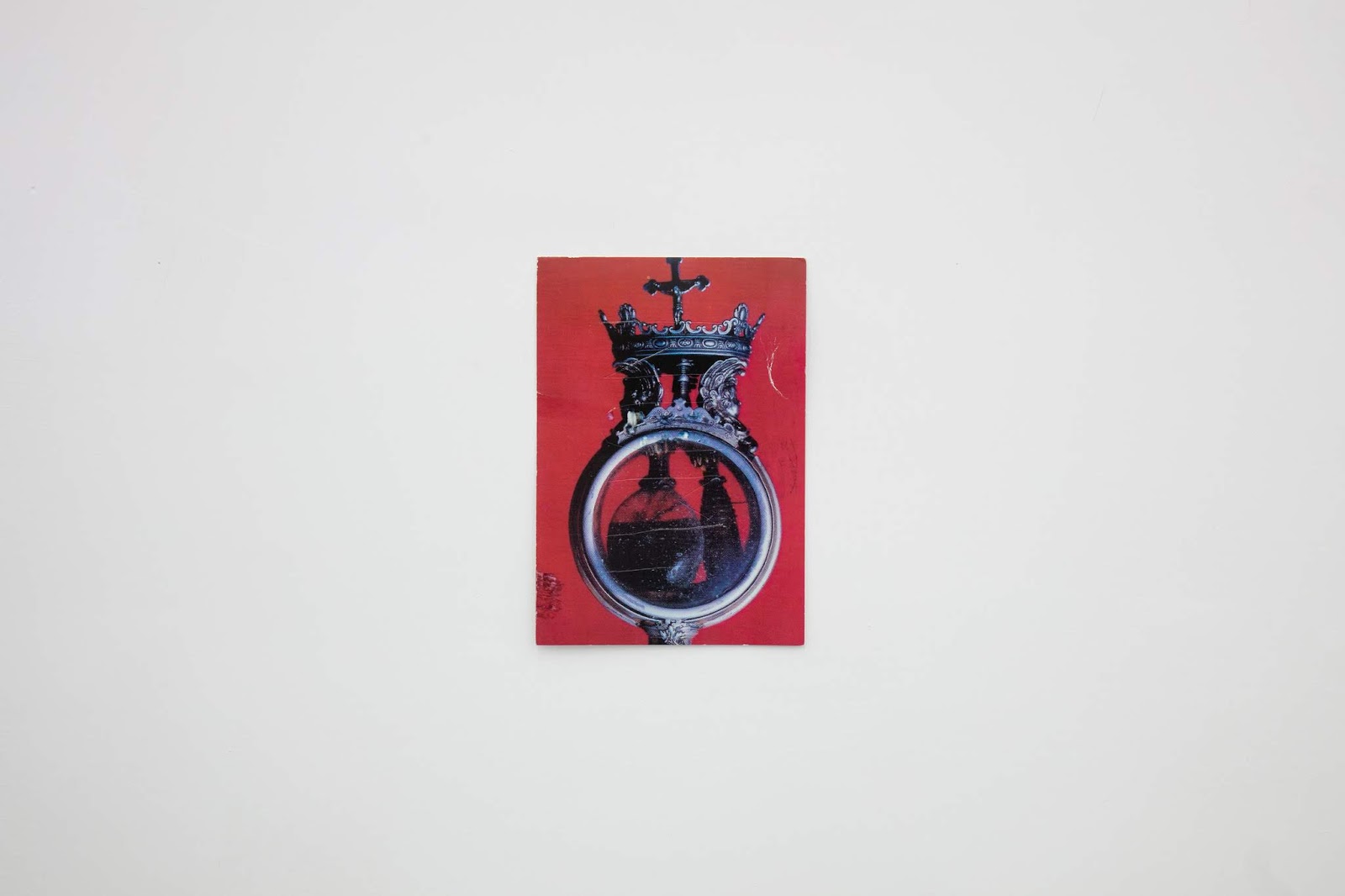 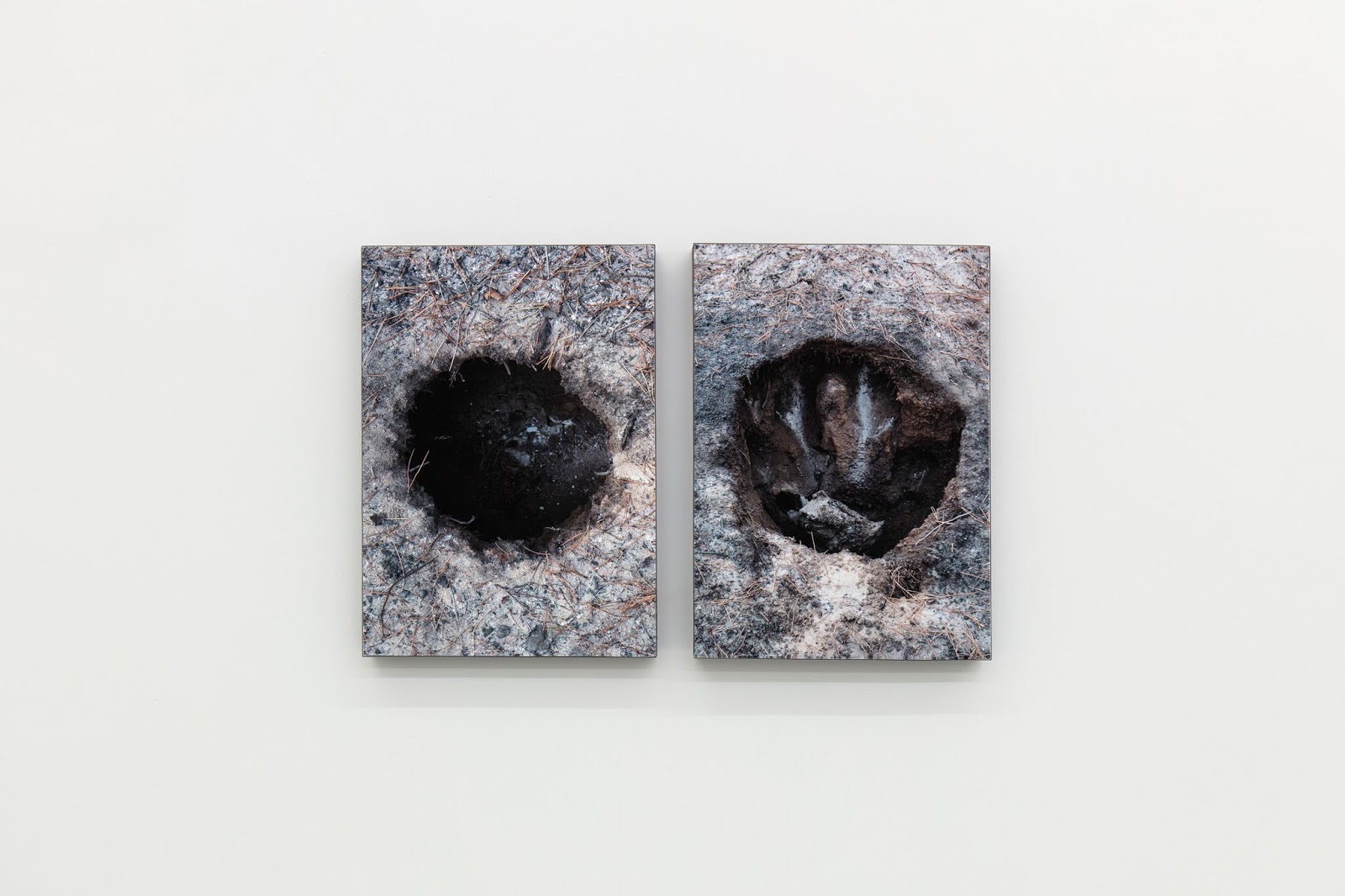 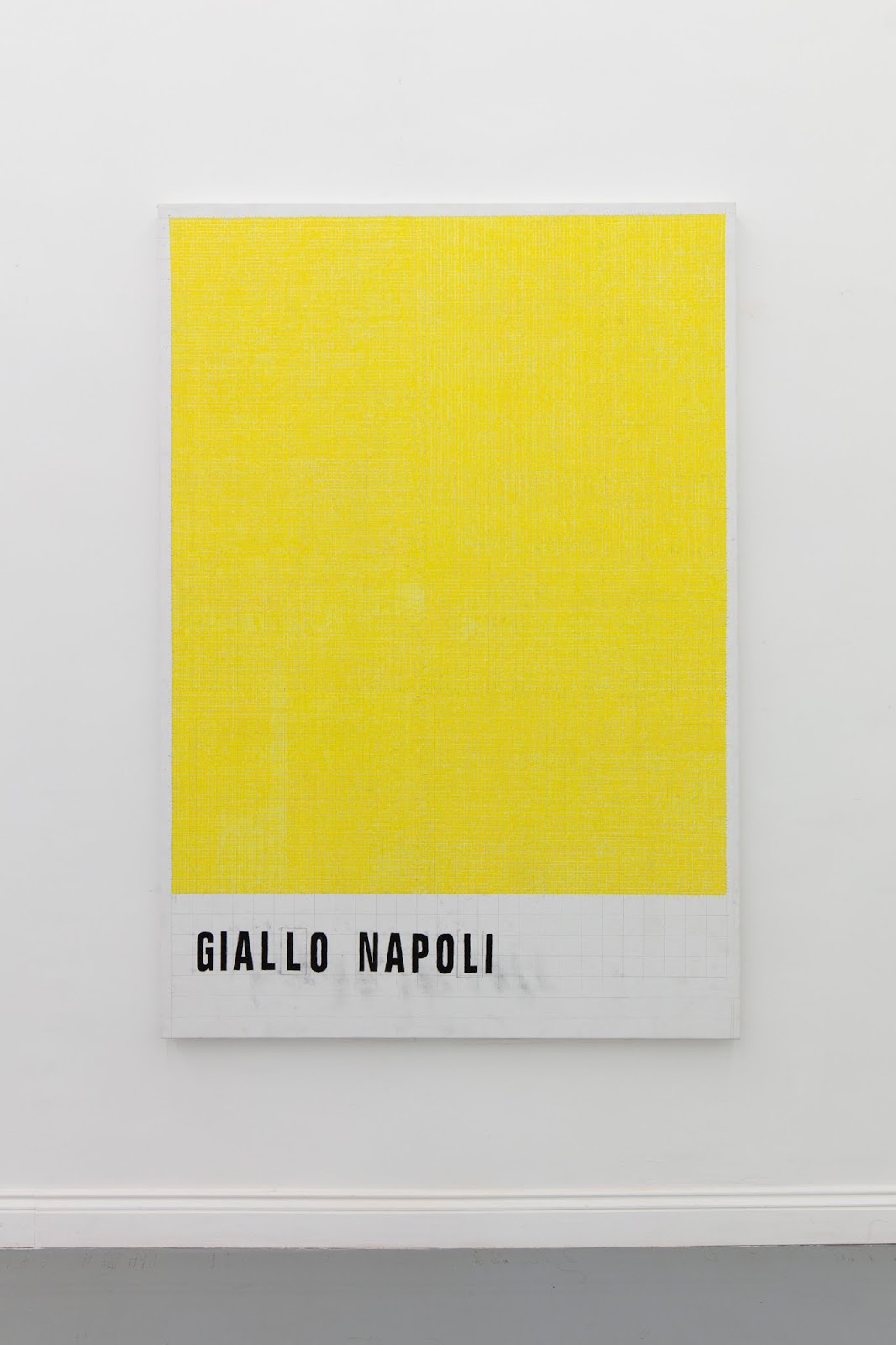 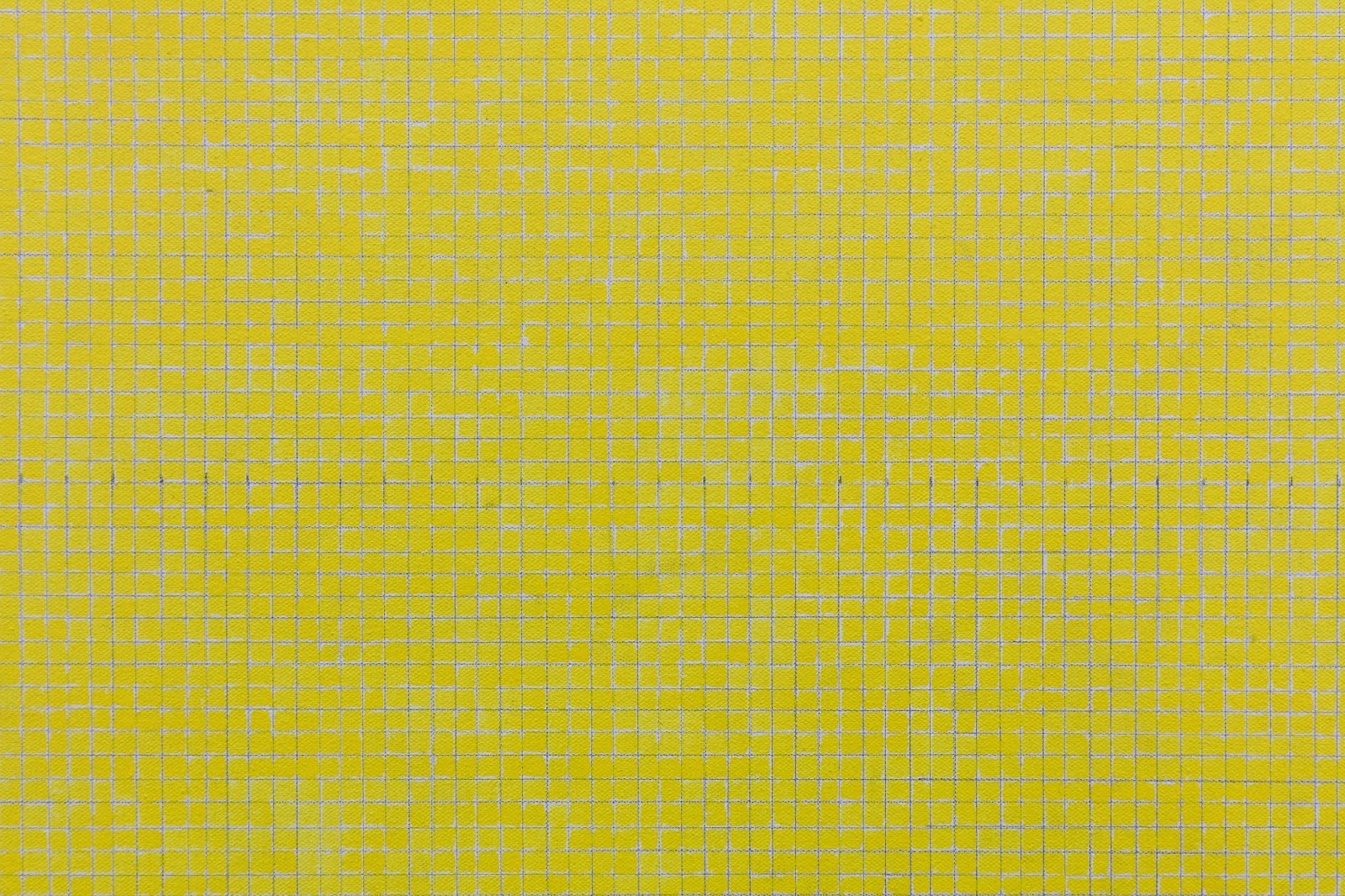 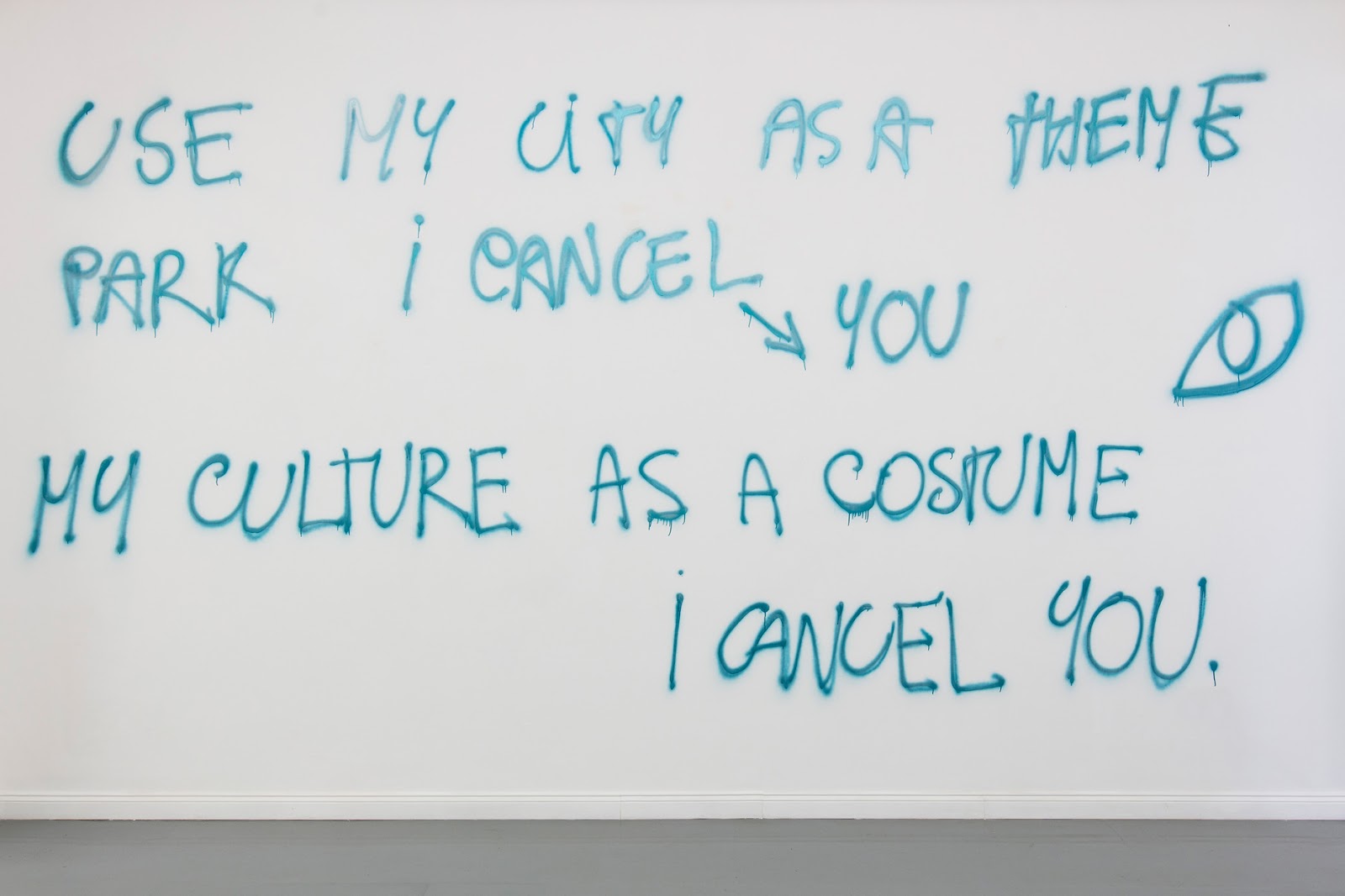 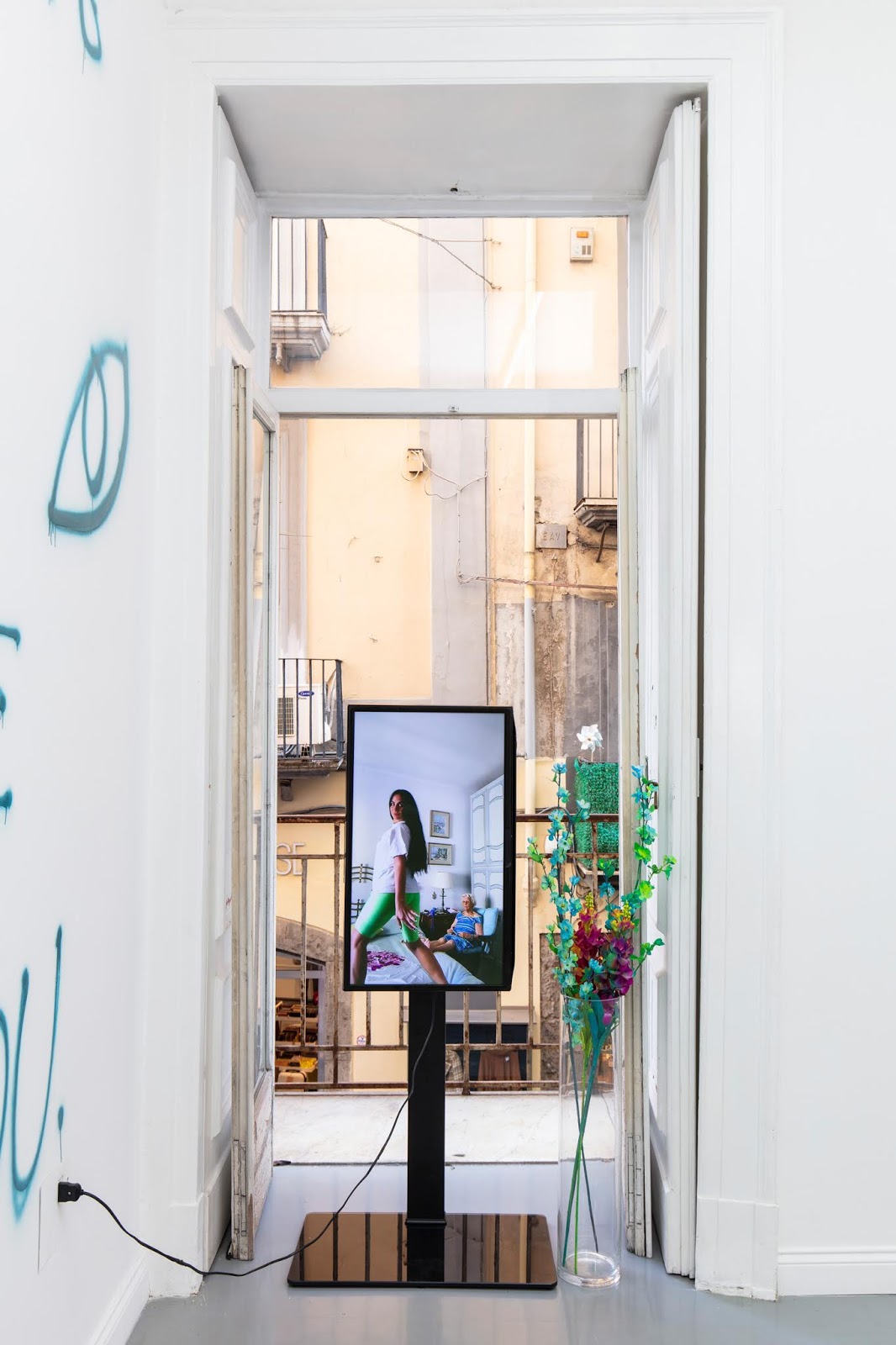 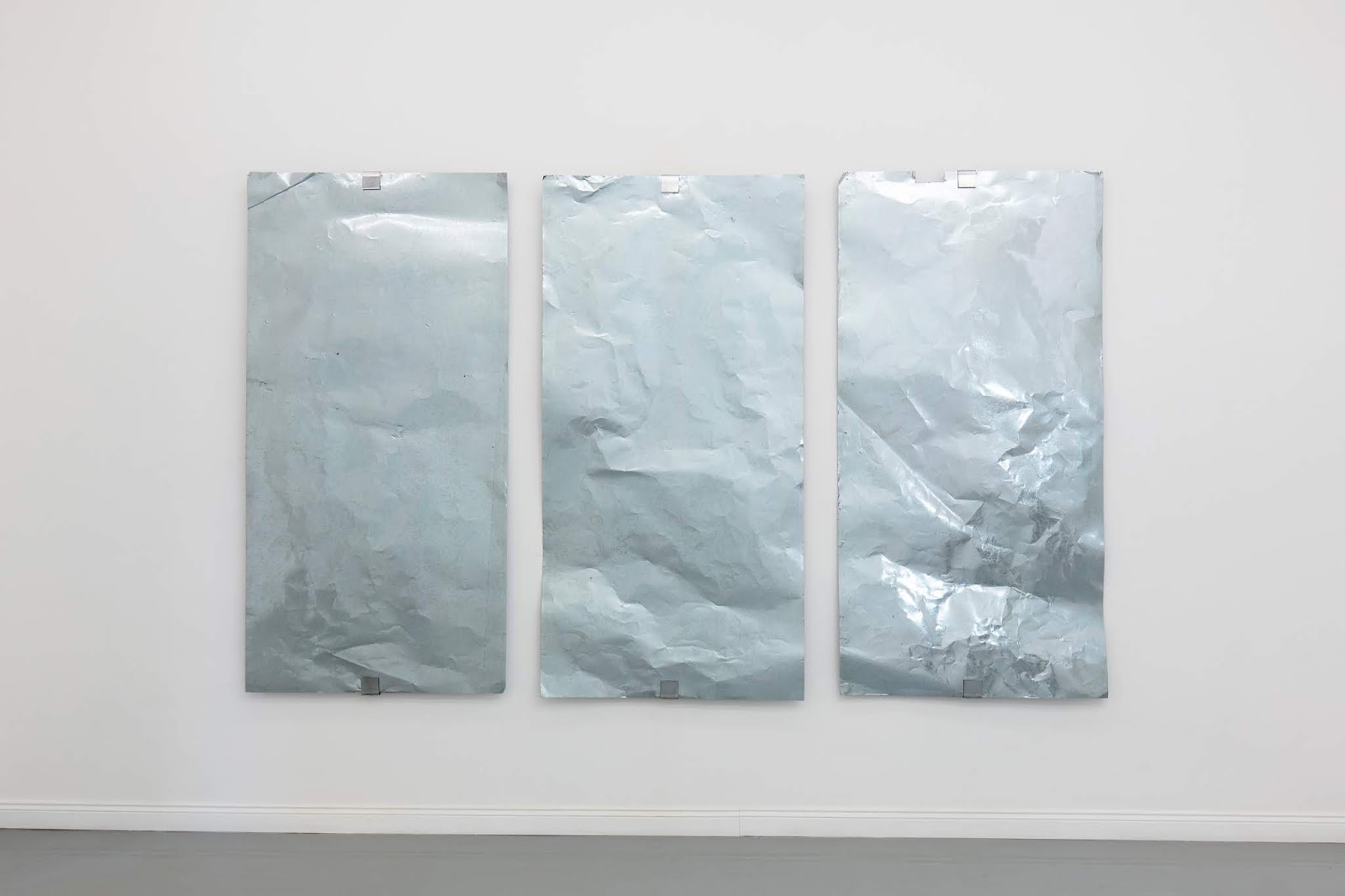 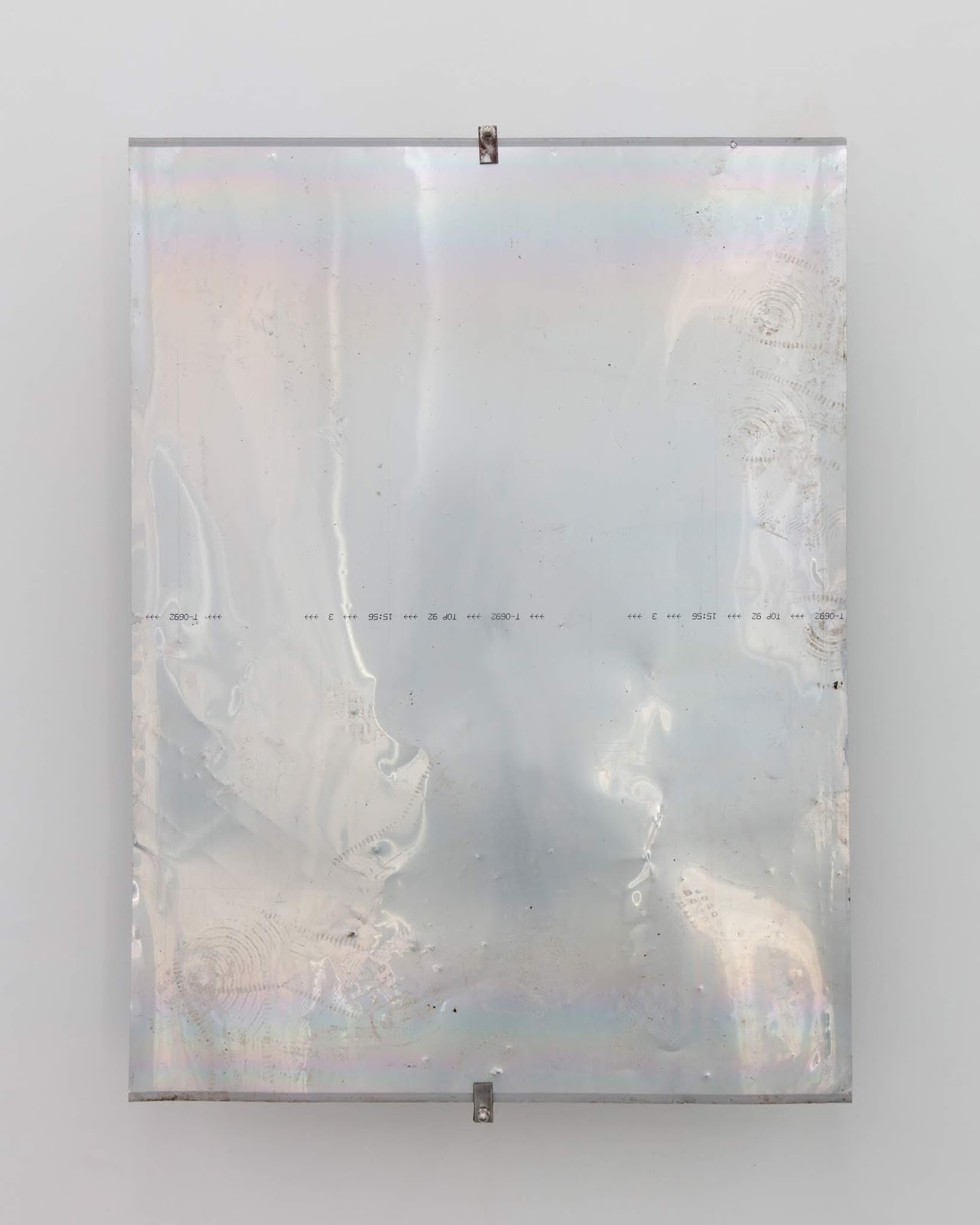 The exhibition will be the fourth of a series of group shows in which guest artists and artists of the gallery program will deal with a specific topic showing both existing works or commissioned for the event.
The five artists involved will collaborate and explore the concept of "napoletanità" - a word used to express the Neapolitan spirit - in the current globalisation era, main theme of the novel used as a pretext to develop anthropological or psychological analysis on the territory in a critical and expositive ideal dialogue.

Vesuvio, 11 luglio 2017 and Ghost Trees are the titles of the photographs by Maurizio Esposito, which have been selected from an ongoing project started two years ago.
"I lived on the slopes of Vesuvius with my family, sharing presence and belonging to the place. This strong,
unconscious feeling, slowly got diluted by the distance, looking at everything from afar, turning Vesuvius into a landscape. In July 2017, 2.700 hectares of pine forests were burned and 50 million bees died. I felt a sense of danger and protection. I helped the fire brigade after a tormented night of anguish. Vesuvius was awakening as an inner presence. When everything extinguished, I felt the need to return and take pictures, dedicating to "him" a real assignment that continues today. "

The Doors of the Mountain King's Hall by Gianluca Panareo.
“On the first night I arrived in Naples, while I was sitting on the steps of a church with friends, I was attacked by the balls thrown by some street kids, a clear invitation to free what was their usual playground. I invited them to express their energy by throwing balls in the spaces of the abandoned Arti Grafiche Napoletane typography, where I was doing my site-specific intervention. On the walls I hung dozens of metal printing plates lying abandoned on the floor, connected to sensors and then synthesizing the noise produced, in order to create an "orchestra" of noise music ... That noise, that energy imprinted, from anger it would become a reason for joy and fun, the driving force behind my installation. "

The graffiti You are cancelled and the video-installation in dialogue with the "open" balconies of the gallery are the two site-specific interventions that SAGG NAPOLI imagined for the spaces of the Galleria Fonti.
"SAGG Napoli’s artistic practice uses narration as a tool to examine the complex socio-political knot of the South of Europe: its historical traces and geo-political entanglements. Placing the body within a specific time and context, the artist reflects on the notions of productivity, self-control, and achievement. The period is the current divisions between peoples and countries, amid increasing territorial acts and cultural biases; the context is Naples, the city of her birth."

Untitled (ampoule of San Gennaro's blood) by Constantin Thun is the title of one of the dozens of postcards that the artist sent to friends in Europe during his stay in Naples in 2015. "NUMI" is one of the words chosen and engraved on the postcard, used in speech therapy for the functional re-education of the communicative and cognitive disabilities of written and oral language, one of the problems of communication in today's digital age, and the central theme of the ongoing project.

Giallo Napoli is the title of the site-specific work created by Sven Sachsalber, a monochrome of the size of 150 x 100 cm built on a grid of thousands of boxes that the artist has filled day by day with a similar oil color for tonality and toxic component to the color giallo Napoli, exhausting research of the shine that characterizes the original one. The famous color of ancient origins, used in painting and emblematic of the city of Naples, according to the artist's research has never been registered and patented, yet it is present in commerce.
"It does not yet belong to anyone, except to its own city".

Narration and its optical languages are no more than a pretext to strip off vital fluids off the rotting carcass of novel as a form: the non-sensical falsification of an intuition that departs from the title and rushes to return to the title itself as soon as possible, by never turning back: Sell Naples and Die. Intuition, as such, has little to do with the so-called author, who committed suicide long time ago now. The author passed away immediately after he had doomed his own characters and the snotty history of their psychic evolution to death, in order to sacrifice their bodies and their personal vicissitudes on the altar of a city that a city is no more. Naples is not a stratified urban space anymore rather it is a coherent system of signs immediately recognizable by a generalist public of consumers therefore easily saleable within the global market of mass cultural products. Who is genuinely interested in Naples? Surely not who demands to the really-existing-city nothing but the sparkle of cold light that the entertainment industry scientifically produces by inducing rhythmical mechanical frictions between stereotypes and archetypes. Both are in fact «types» even though the latter are encrusted forms of the former, which produce the illusion of being perennial while they draw legitimacy simply from the a-temporalized and de-spatialized sinking of the hierarchies of power that establishes what is to be considered eternally human and what eternally monstrous. Nevertheless, it is precisely upon the fault-line of such an enduring anthropological monstrosity that Naples unleashes its semantic substance that is pneumatic in nature; one that is able to inform, deform and transform unspoken words, hidden images, and unlived experiences, into Otherness: inspiration into conspiracy; literally, «breathing in» into «breathing with». Naples, thereby, becomes a necessity. The necessity to breathe collectively from a single imagery. Such an imagery materializes through the panoply of digital tools and telematics of XXI century, but it becomes visible for what it actually is: a telepathic matrix wherein the relationship between alternative and mutable configurations of the spacetime does not allow one single chronology of pasts, presents, and futures, rigidly defined once and for all. For this reason, the collective artistic intervention into this imagery that Sell Naples and Die re-activates, thus celebrates, gives life to six creative acts, six distinctive morphogenesis, whose presence, nonetheless, marks a co-presence within a single morphodynamics ruled by occult internal ratios through six hermeneutical figures: memory, erasure, paroxysm, anachronism, commodification, heresy. The project Sell Naples and Die lives with the secret and seducing voluptuousness that drift could become a shipwreck among the waves of degeneration rather than comfortable stagnation into the mirror swamp of what has been already said or already done.