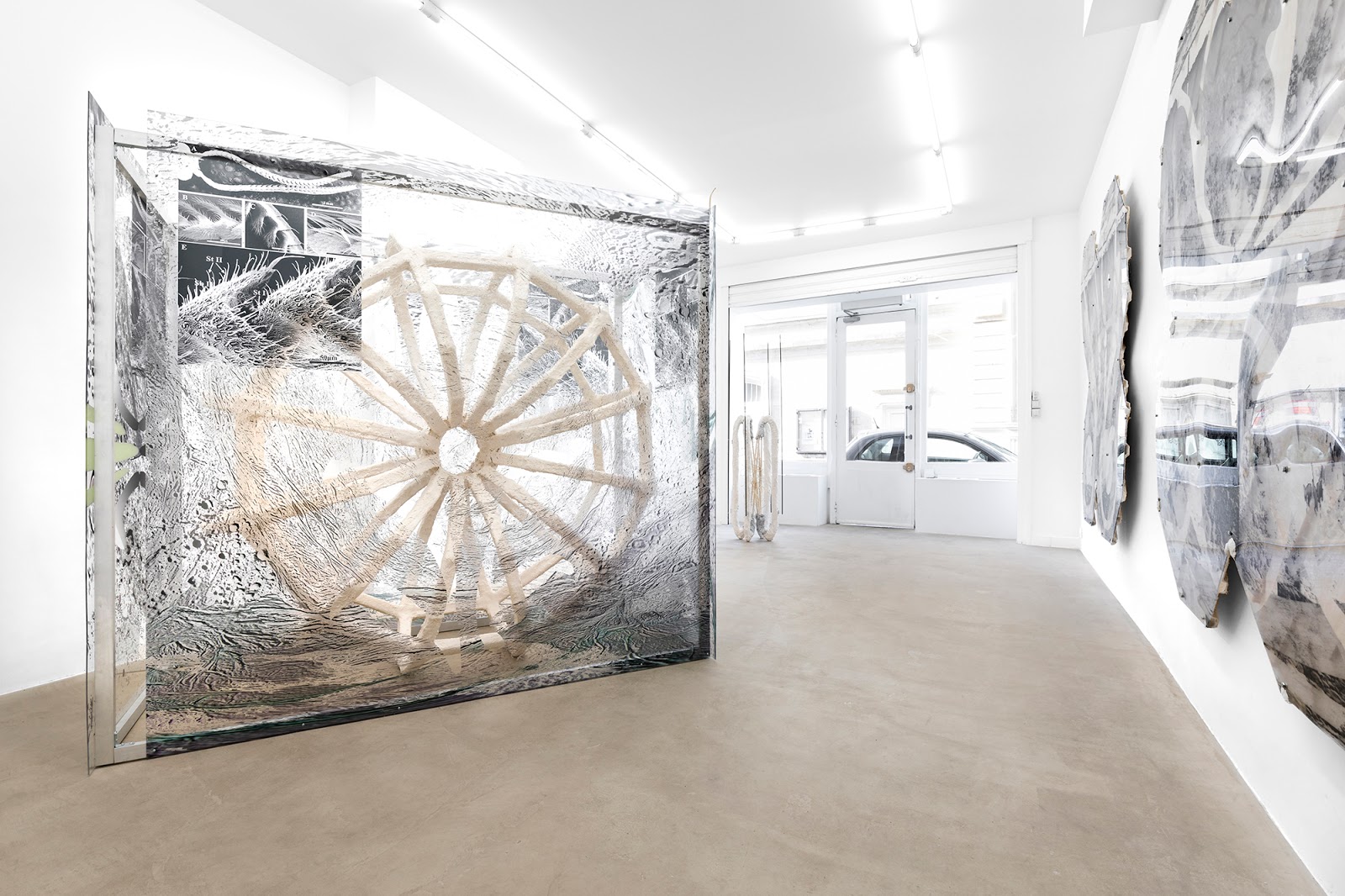 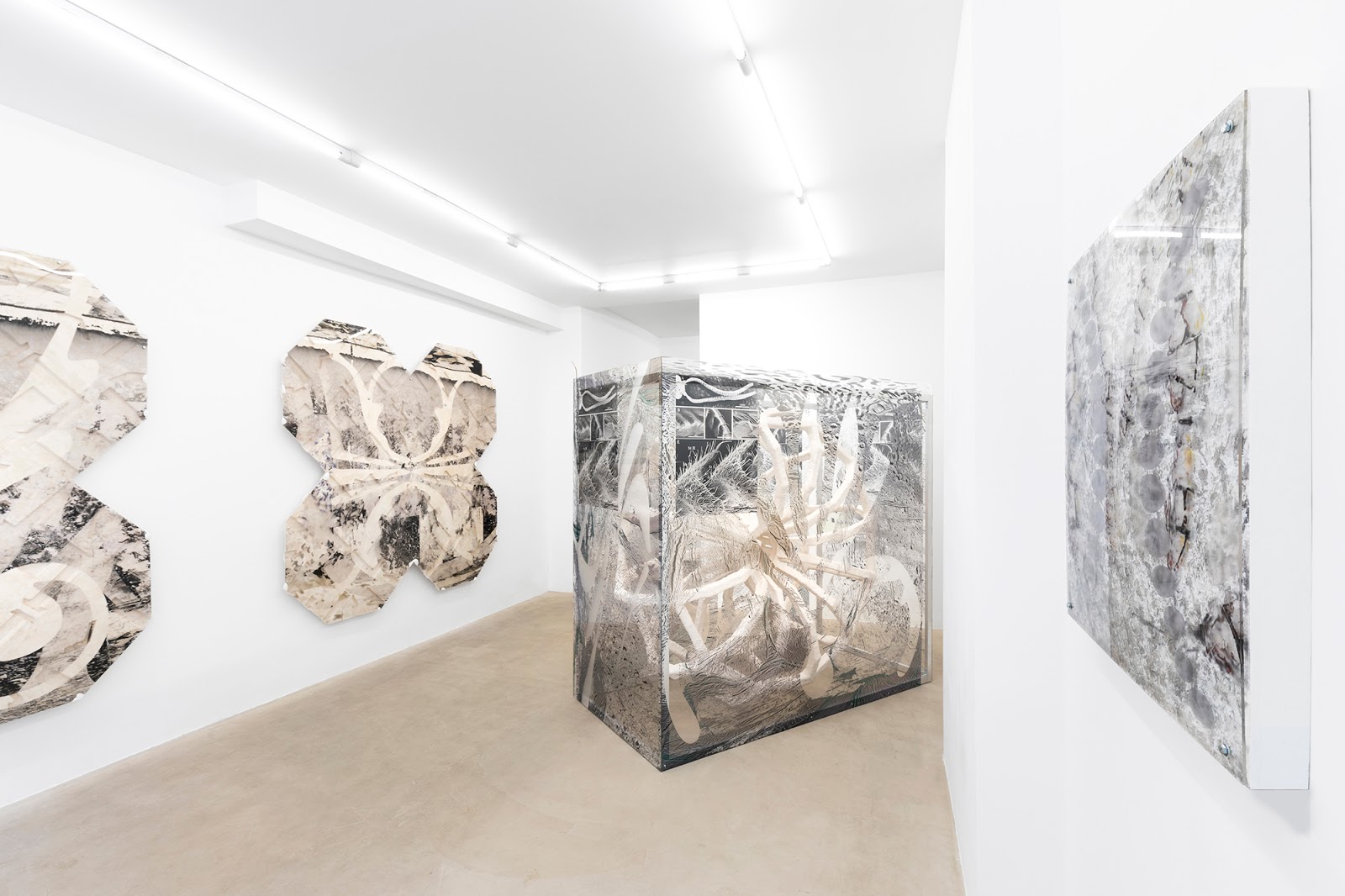 
It could be read as the title of a video game, or a sci-fi saga – “Vision Quest” – the frantic search for an ocular experience or a new horizon. The reality, without totally contradicting this speculative reading, lies in a less futuristic perspective, at the heart of timeless rituals, without any precise location.
“Vision Quest” is therefore the title that Pierre Clement has chosen to reunite the ensemble of works produced for his exhibition at Galerie Valeria Cetraro. The expression, which could be translated to a “rite of passage,” is a reference to a succession of ceremonies and hardships that accompany the various steps of a person’s life, particularly in American Indian cultures. More precisely, “vision quest” evokes the passage from childhood to adulthood. Some rites consist in sending a young man to a sacred site for four days and four nights without food and water. Through prayer, summoning and the shedding of tears, the teenager’s exhausted body and soul welcomes the appearance of spirits who reveal the meaning of his presence on earth, while also dictating his role in society and the best way to fulfil it.
Transposed in the exhibition space, this story serves as the starting point for a technological epic, a seemingly new founding myth formulated by the artist. By replacing the boy with a machine reminiscent of that invented by the mathematician John von Neumann, who developed the concept of the self-replicating probe, Pierre Clement imagines a form of interplanetary colonisation made possible by this autonomous mechanism. The machine, moving from planet to planet, gleaning what it finds to feed on raw materials, is capable of constructing an identical double of itself, building different hubs to settle in before continuing its space exploration. From there, and in an extended form of syncretism combining artificial intelligence, DNA manipulation and the creation of life, the artist develops a formal language that hypothesises a world populated by machines, where the human is absent, perhaps even before the machine could rewrite the code that would trigger its return.
Just as the question of a living artificial generation through the insertion of a technological and extra-terrestrial entity spanned speculative fiction for decades (one can think of Philip K. Dick, his VALIS trilogy in particular), it serves here as the conceptual matrix for the works installed within the gallery space. The almost bone-like white hue dominates each of the works that the artist wishes to present in a classical manner, without attempting to produce an environment that would become the décor. He also expresses a particular form of affectation on the surface of various pieces that have the appearance of necrotic flesh whose paleness, almost anaemic, accentuates the discomfort of degenerative proliferations. Their connection does not constitute a potential situation of visibility, but rather allows us to enter this fiction based on Pierre Clement’s research on possible collisions between the technological and the organic. The exhibition space thus takes on the appearance of a headquarters, or a clinical presentation, where the instruments and various proofs of this machinal colonisation unfold. A sculpture evoking a tumbleweed recalls the uncertainty of migration, while a summary map extends to the wall seeming to record the roughness of the territories delineated by the machine. As for the plexiglass frames, their transparency reveals the motifs of images of blighted and depleted lands and unequivocal satellites representing empty, sterile planets of all kinds.
With this project, Pierre Clement indirectly seizes the human responsibility for the depletion of resources. The self-replicating probe, whose artificial intelligence calls for perpetual expansion, appears as the harmful continuation of a humanity in constant search of growth. Nourished by scientific and ethnological research and in a considerable temporal ellipse, his practice combines so-called primitive rituals with the exponential intrusion of technology in our conception of reality. The return to myths and inner visions implied by the title reflects the hallucinated predictions of a world surpassed by its own entropy.