A conversation with Krista Clark triggered by her solo show “Untenanted” at Spencer Brownstone Gallery in New York.

A conversation between Krista Clark and Irini Miga triggered by “Untenanted,” an exhibition by Krista Clark at Spencer Brownstone Gallery in New York. Irini Miga: Let’s take it from the start. I would like to ask you how it all began, how did you first connect with art, and how did you arrive at this intersection of art and architecture?

Krista Clark: I have always had a connection to art at an early age through the discourse of drawing. When I was younger it was my dependable, safe and familiar space. My early work was the result and catharsis of growing up within a black family in the predominantly white state of Vermont.

Moving forward in time, I arrived at my interest and intersection of art and architecture through a series of shifts in my practice. The initial shift came from my need to translate my organic drawings of spatial quests into a more tangible or perhaps relatable? language. The earlier phase was a search within the space of the paper and my process…I referred to it often as an expedition. The compositions were open-ended and focused on mark-making. Around this time, I started to observe the transitional architectural spaces around me, from the demolition of homes to commercial development to the empty lots in limbo. The sites all contained happenstances with poetic gestures and relationships of materials that I couldn’t dismiss. I was also looking at work by artists who were using “simple” formal gestures to stand or speak for a larger narrative. For example, covering or blocking parts of structures in order to erase them or negate their intended institutional power or layering objects in a specific order to highlight an implicit hierarchy. Initially, I began to ground my own language of mark making, previously aloft, by imbedding it within a drawn architectural space. I eventually moved outside of and broke away from the rectangle of the drawing and directly onto the wall, which already had marks for me to respond to and begin to map within. This move also forced me to contend with the physical space of the room I was working within. The next continual shifts came through materials, first tar or roofing paper, sheets of insulation, orange fencing…all allowed me to approach them at first through the lens of a drawing. They gradually became more three dimensional and the architectural space abstracted. IM: Your work stands strong as anti-figurative but in a way, it’s deeply anthropocentric. Your rudimentary structures rip out elements from the guts of the rooms they inhabit reminding us what we have already forgotten about the spaces that we daily inhabit. The blue construction fabric seems to be fraying and the yellow and blue thread tangle and untangle a dialogue between the interior with the exterior space. What are the new elements added to your toolbox with “Untenanted?

KC: In “Untenanted”, I was considering the game of real estate and thinking of architecture as object. For most of us, our relationship with the built environment is derived out of and ends with the need for security, comfort and aesthetic; as opposed to a spatial pawn within a game, never to be inhabited, or even entered, only to be acquired and invested. From this, I decided I wanted to elevate a few of the works and objectify the architectural moments. I wanted to create pieces that referenced built spaces but in general fail to complete this illusion, ultimately due to the formation of the materials. There were a few firsts with this show. It is the first time I have only had sculptural works and it is the first time I have made an outdoor piece. This piece, “Constructing a Monochrome”, really forced me to think through its environment, and in that way, I think may be the truest site-specific piece I have completed. Another work that introduces a new gesture for me, is “Layaway”. In this piece, there is a framed-out section along the wall that sits above a concrete slab. Standing on the slab, are three, eight foot boards, one of which leans out into the space of the gallery against a connected line of bungee cords. This particular play of tension and precariousness is new for me and one I know I will revisit with new work. IM: Your show feels to me like a breathing meta-room without walls. A connecting space in flux, one that stands still for just a fleeting moment, challenging us to find comfort in the silence of a noise that has just ended or that is about to begin. Your sculptural elements stand in precarious balance questioning our assumptions. What are your goals with this kind of “behavior” of work? And how does time play along with that?

KC: I think there is always a question regarding the point of time we are witnessing the “happening” of these materials in my work. Have they been removed or taken away from a site? Are they amid construction? Are we seeing a completed structure?  The precarious balance is a way for me to create disruption or discord not only within the space but also within our aesthetic expectations of the material. It is about referencing and disrupting their relationship to Minimalism- interrupting the perceived order of an aesthetic that is attempting to be achieved, but, yet again, successfully failing. I think the unfinished state of the materials at once creates a pause in our interaction with them as though frozen in a certain place and time. Yet, their incompletion allows them to be in constant flux, in transition and indeterminate.

Regarding your reference to “the challenge of finding comfort in the silence”, I think that speaks to our contradictory relationship with the space of transition because it is bookended with the unknown. For me, I am drawn to these poetic moments within these compromised spaces and I sometimes wonder what it means for me to honor them in this way. Meaning, am I ultimately honoring that game I referred to earlier that is so elusive and exclusive. 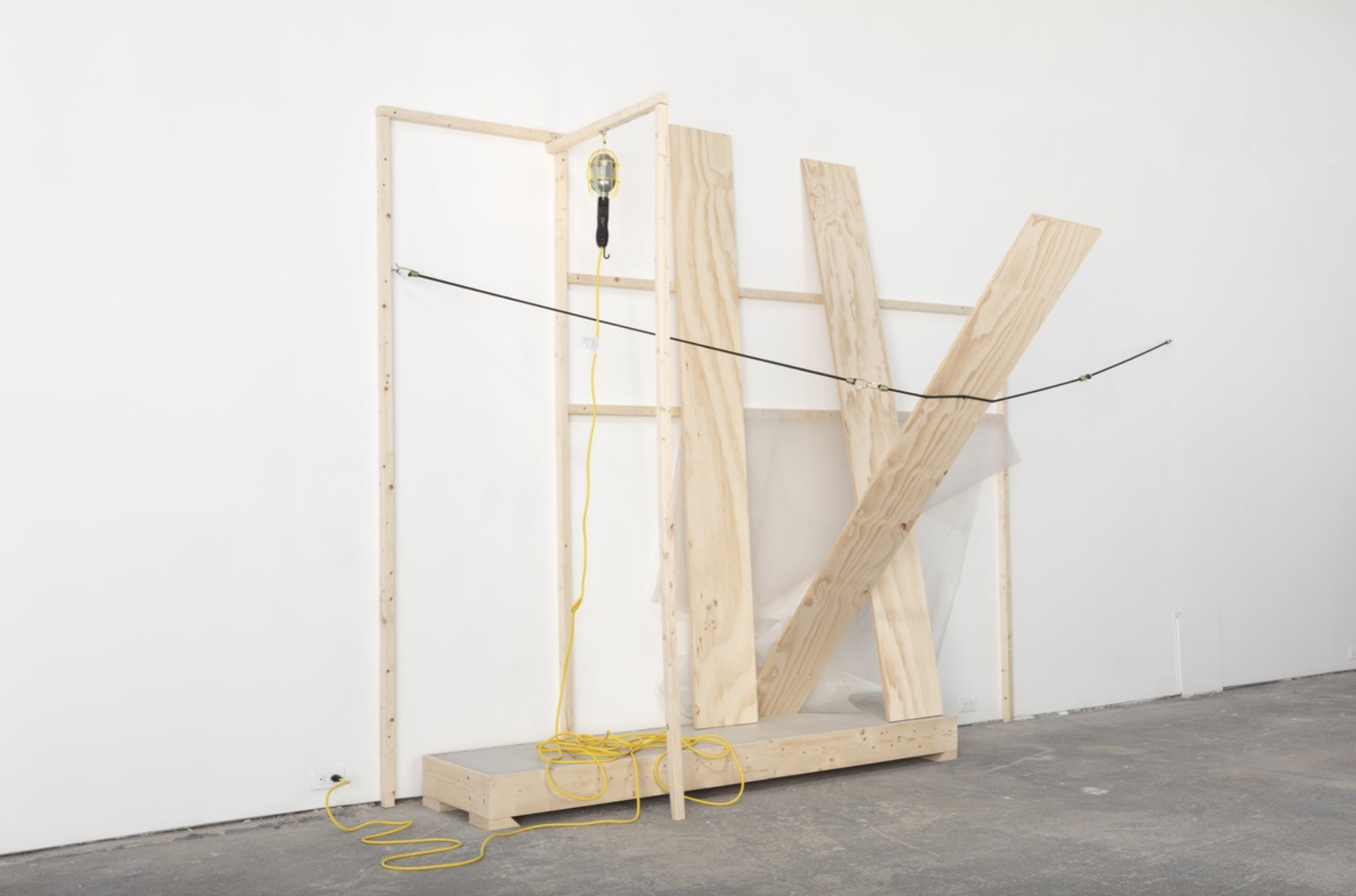 IM: If you had to encapsulate the experience of “Untenanted” in one sentence what would that be?

KC: For me, I think “Untenanted” is like a system of architectural organs with a pulse between stasis and flux urging you to consider your own presence in relation to the (in)action within each of the forms.

Krista Clark was born in Burlington, Vermont and currently lives and works in Atlanta, Georgia. She completed a residency at Hambidge Center for the Arts in Rabun Gap, Georgia and her work is in the permanent collection of the High Museum of Art and the Museum of Contemporary Art in Atlanta. Clark’s work has been featured at the Studio Museum in Harlem, RedLine Contemporary Art Center in Denver, The United States Embassy in Bratislava, Slovakia, The Atlanta Contemporary Art Center and the High Museum in Atlanta. She is a recipient of the Artadia Award and the Working Artist Project Award with MOCA GA. Clark received her BFA from Atlanta College of Art, MA from New York University and MFA from Georgia State University. Krista Clark is an Assistant Professor at Morehouse College.


Irini Miga (b. Greece, lives in NY ) studied at the Athens School of Fine Arts, London’s Central Saint Martins College, and received her MFA from Columbia University, New York on a Fulbright grant. Recent international shows include: Reflections (solo show,) at Atlanta Contemporary; Away in Another Way of Saying Here (solo show,) at Essex Flowers gallery, in NY; Room for Failure at Piero Atchugarry  gallery in Miami; Tomorrow’s Dream, at Neuer Essener Kunstverein in Essen; Scraggly Beard Grandpa, at Capsule Shanghai; The Best is the Least We Can Do, at Atlanta Contemporary; The Equilibrists, organized by the New Museum in New York, the DESTE Foundation and shown in the Benaki Museum in Athens. Miga has been honored residencies by several organizations including the Skowhegan School of Painting and Sculpture; the Drawing Center’s Open Sessions program, Bemis Center for Contemporary Art Residency Program; The Fountainhead Residency; Lower Manhattan Cultural Council, Workspace Program; and The Watermill Center. Her work belongs to collections such as The European Central Bank Collection, and the DESTE Foundation for Contemporary Art / Dakis Joannou Collection, Athens, Greece. Her work has been mentioned at Artforum, Flash Art, Time Out New York, Ocula, Blouin ArtInfo, Huffington Post, Art F City, and ARTnews.