Charles Benjamin / P for Everything
Curated by Samuel Leuenberger 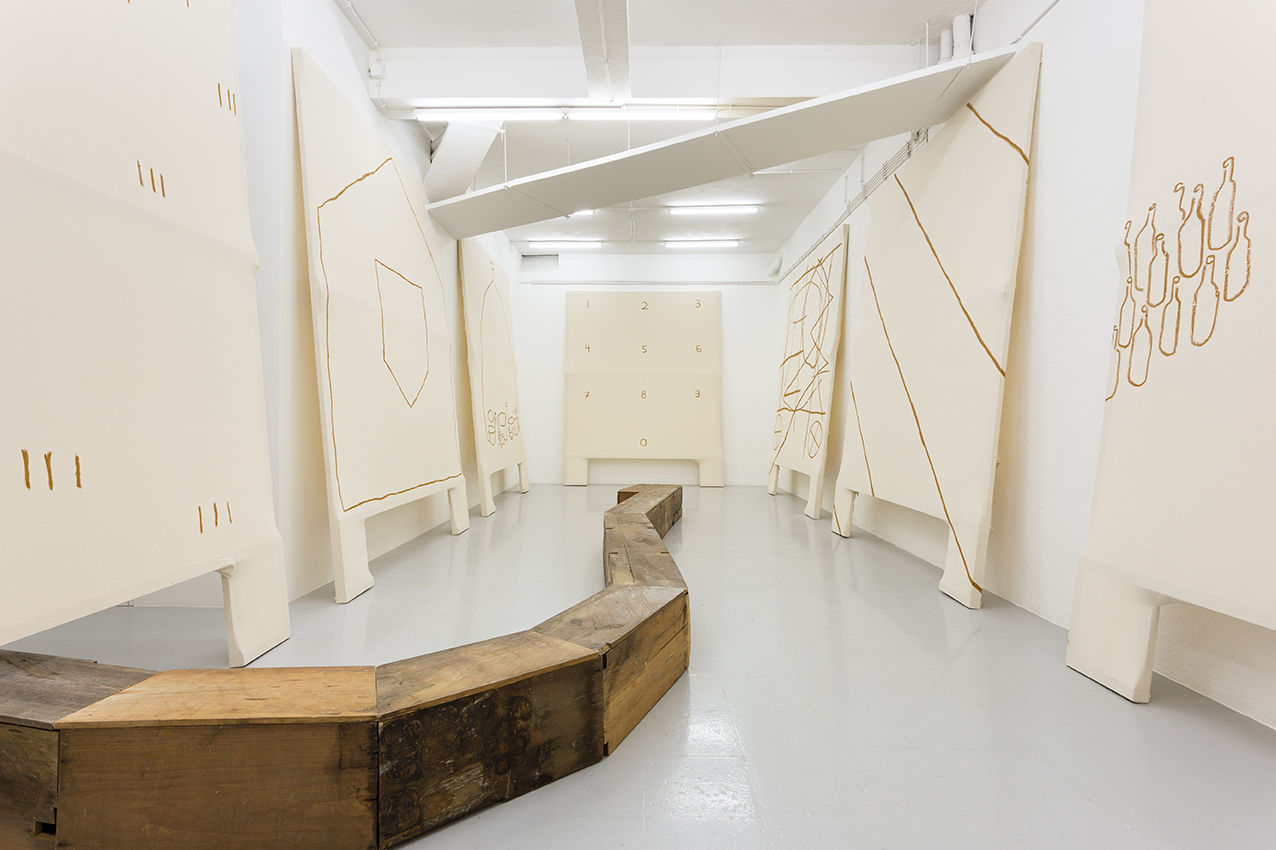 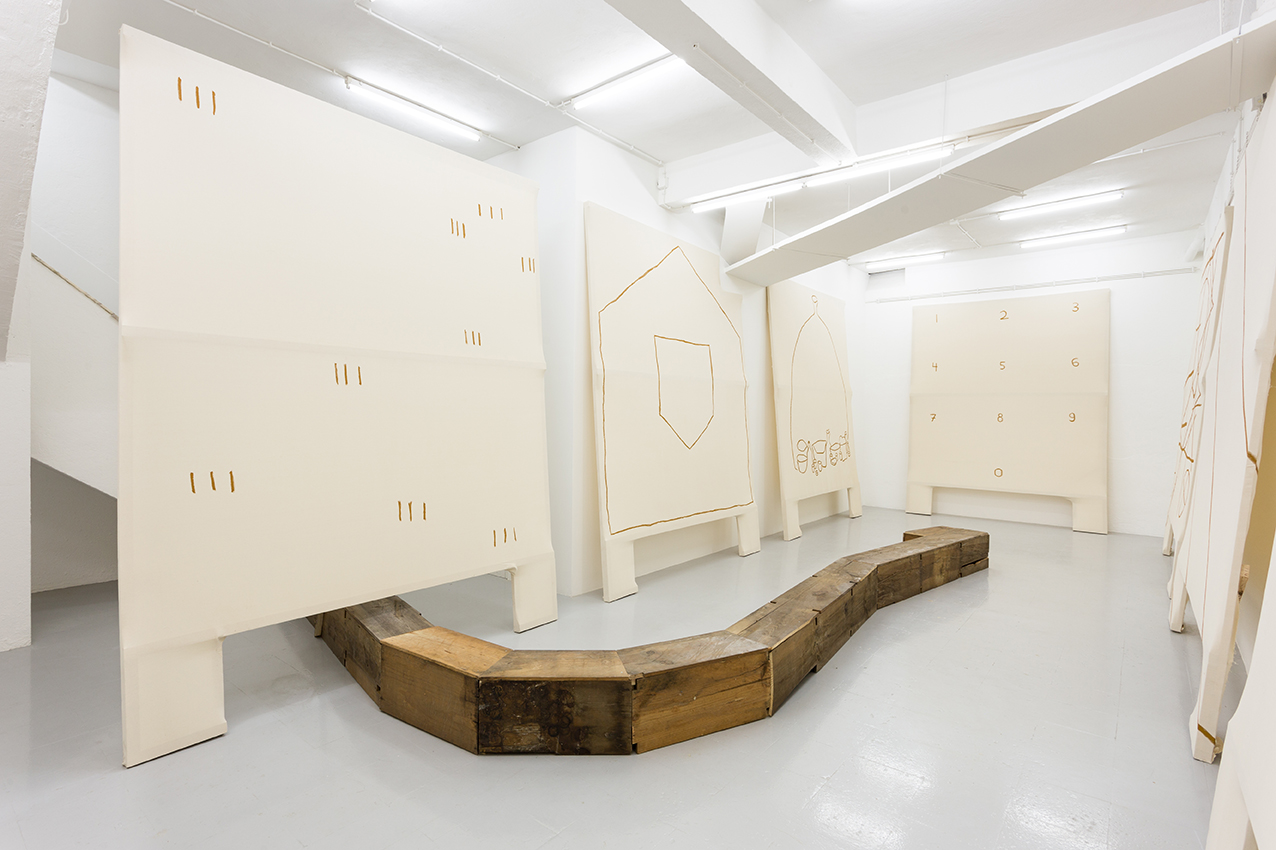 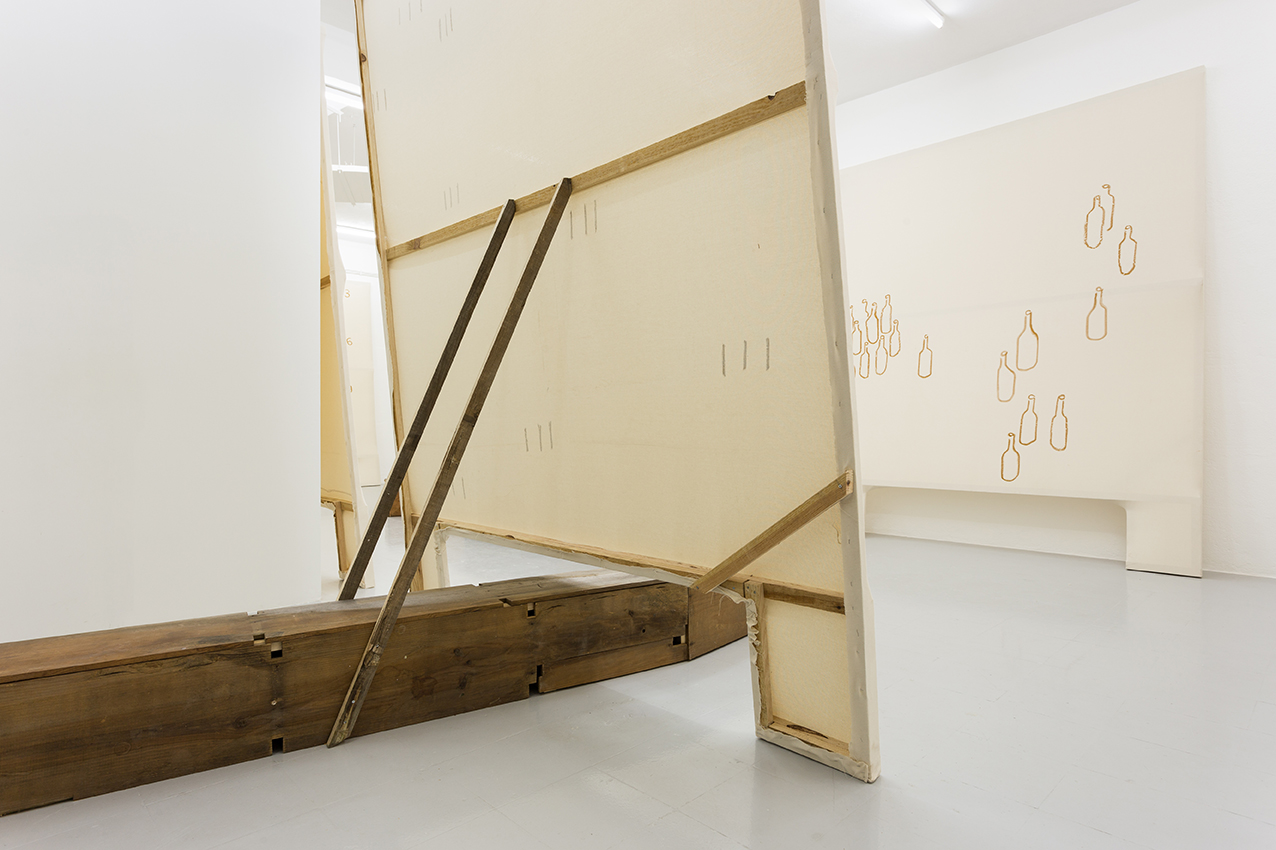 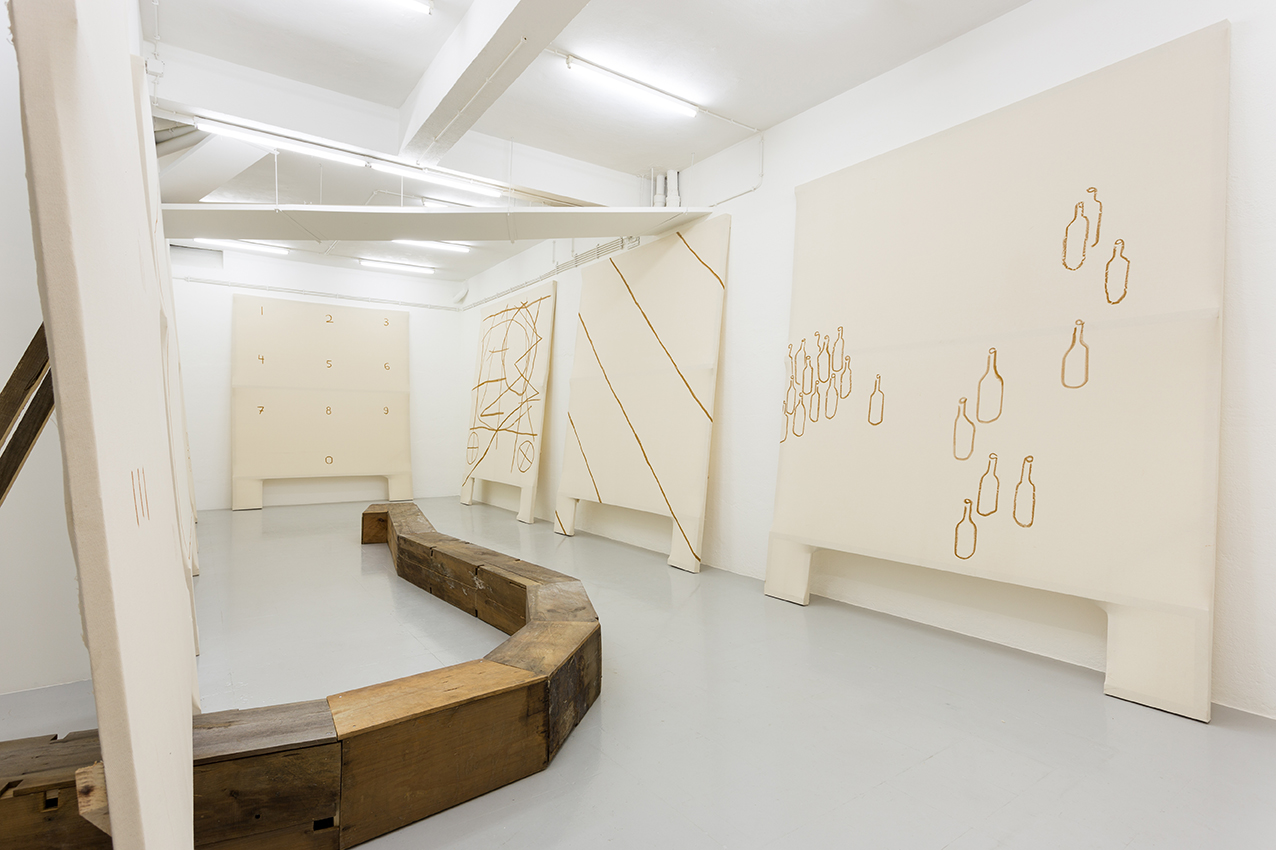 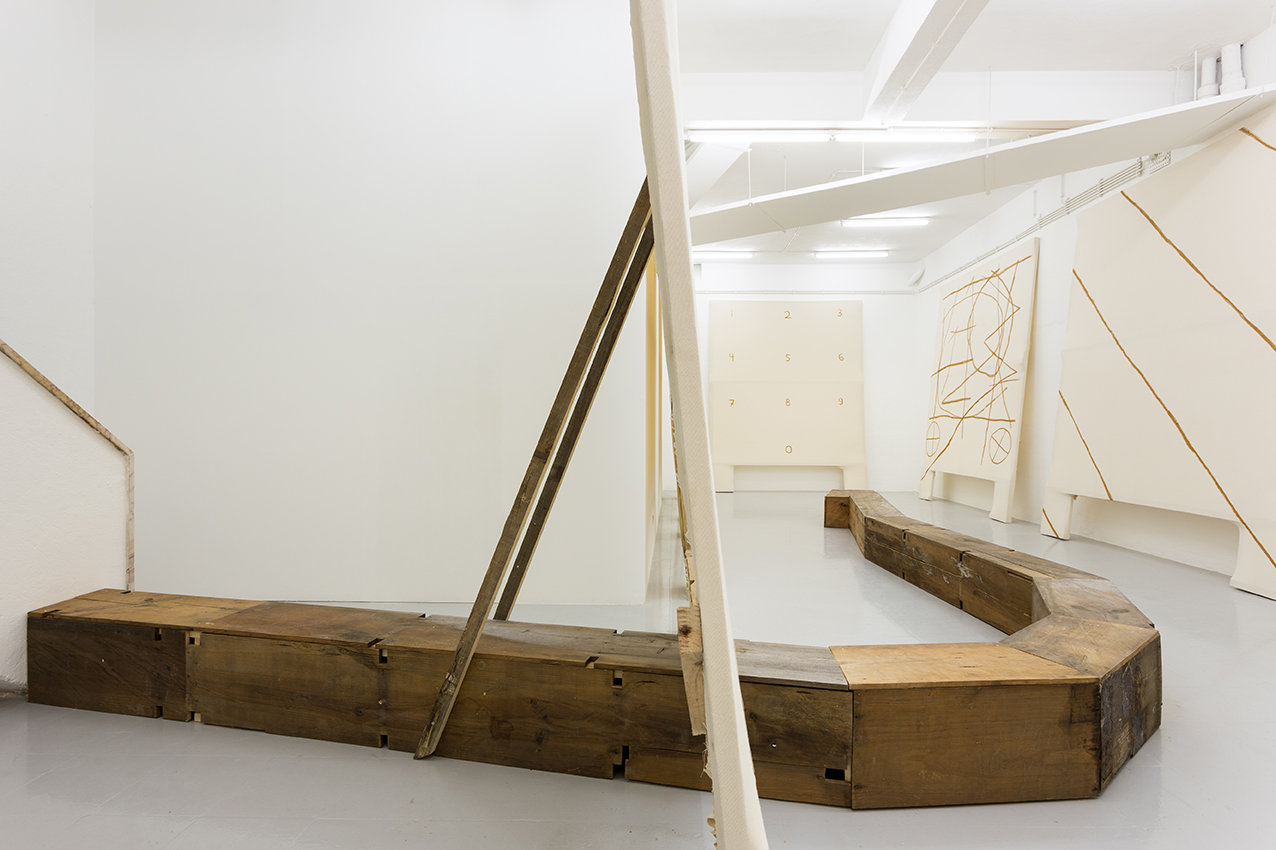 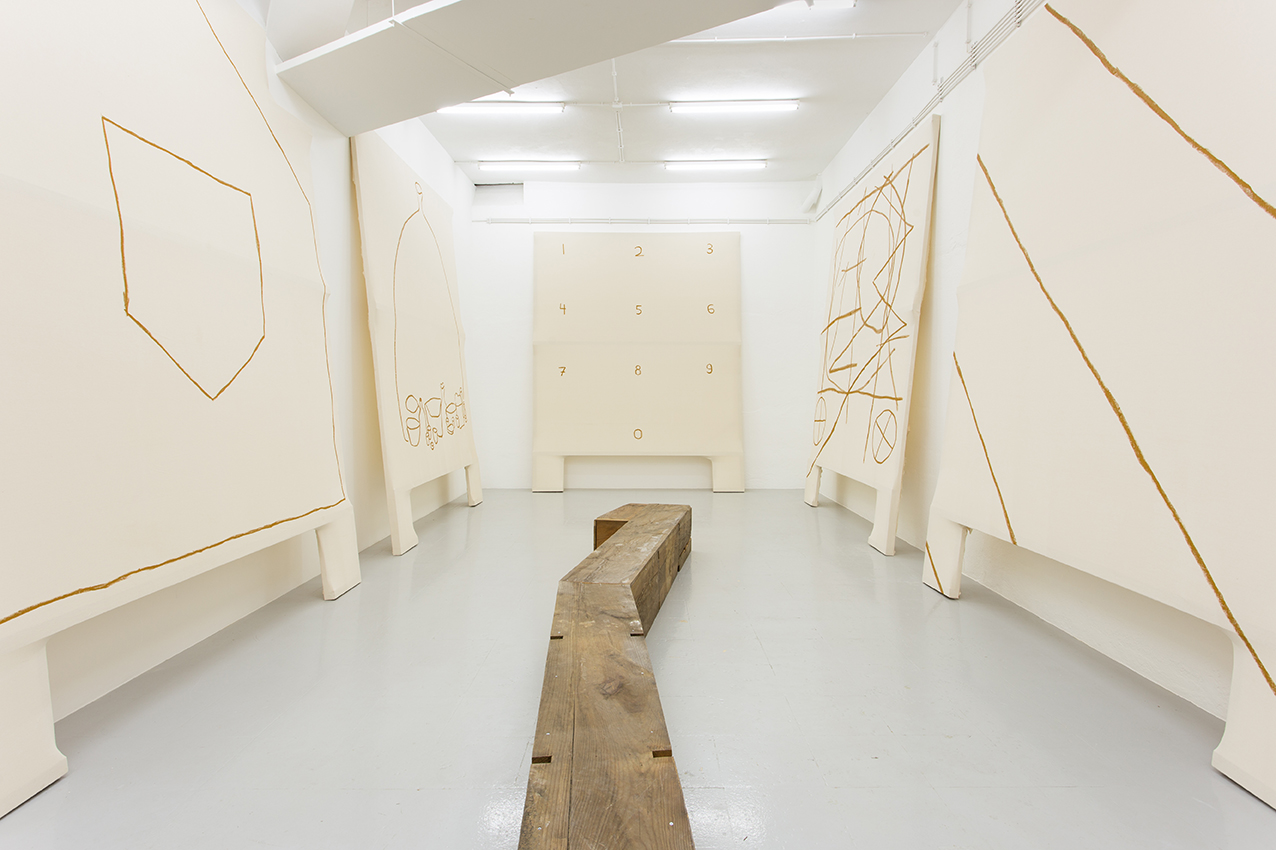 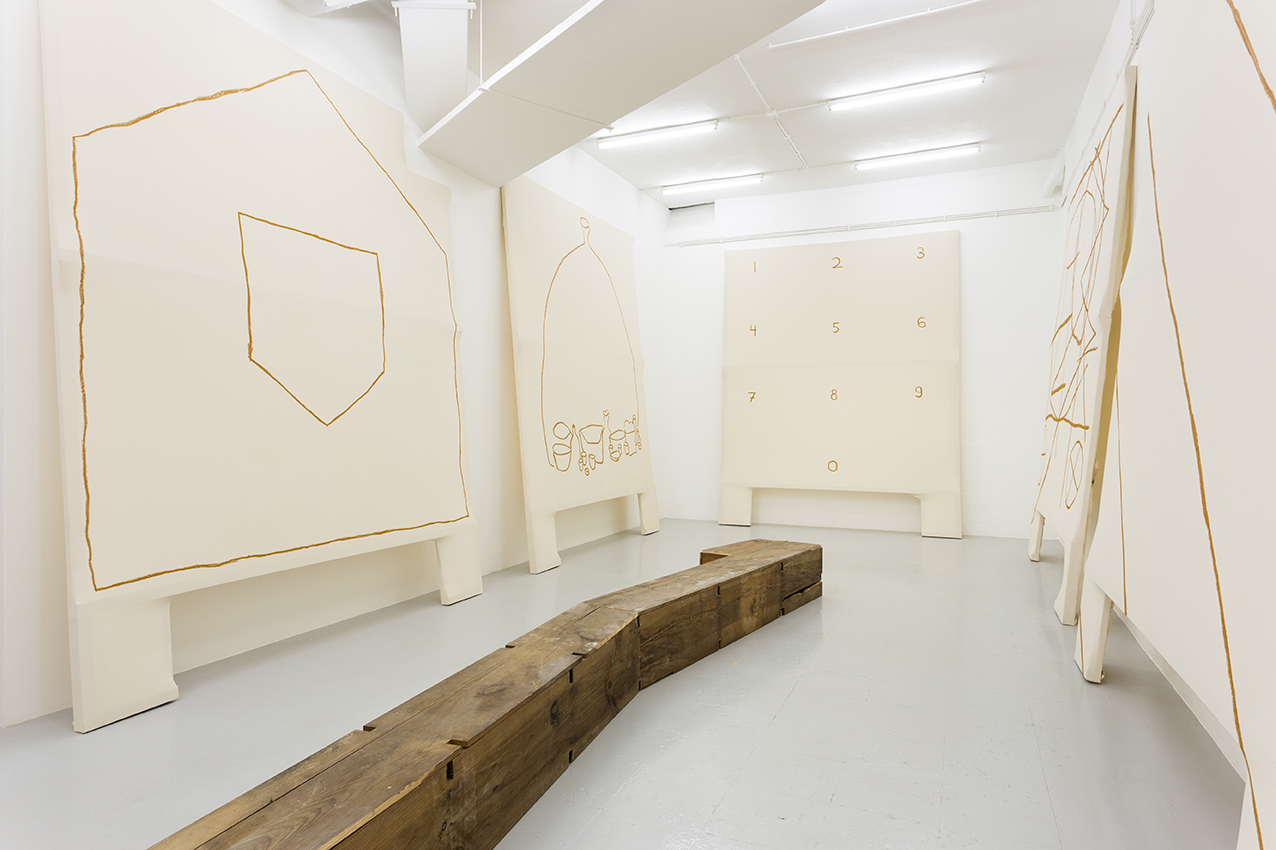 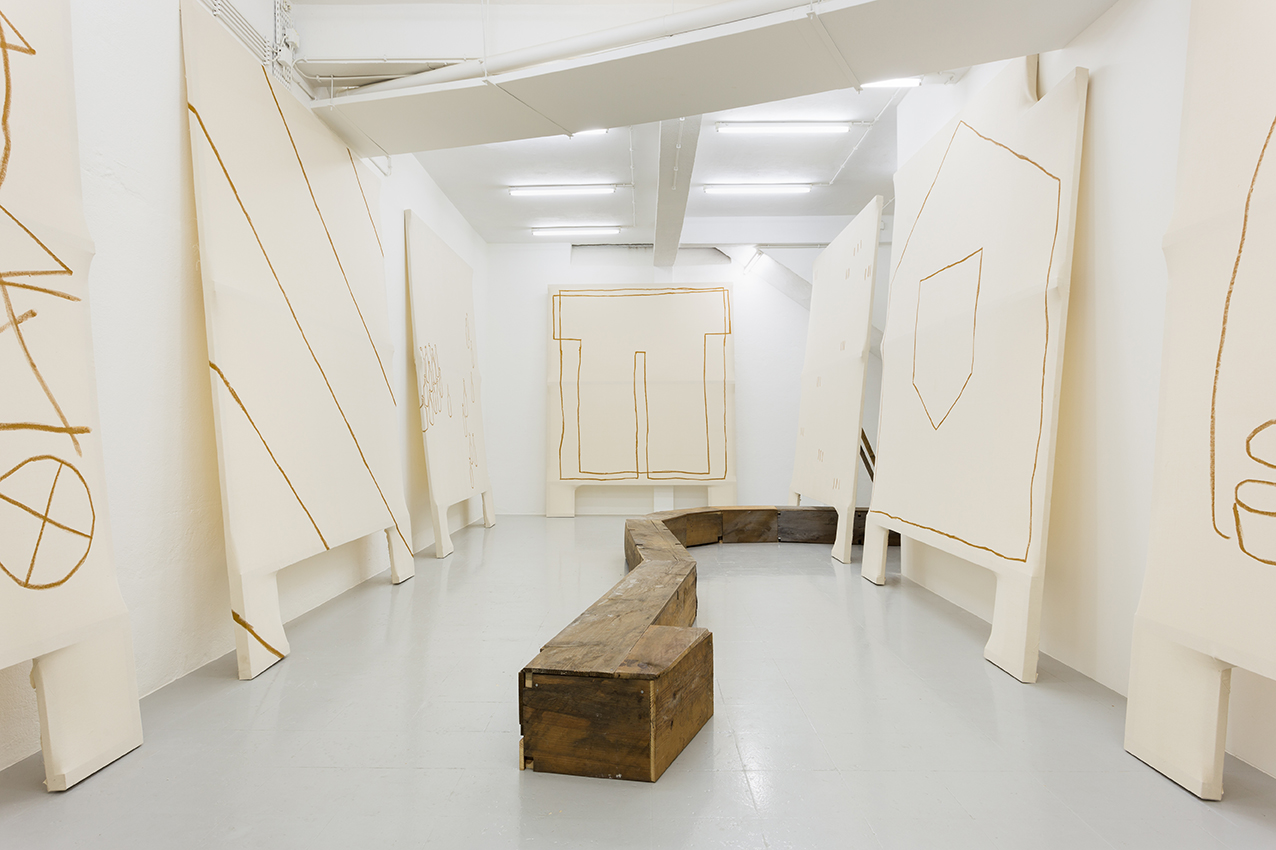 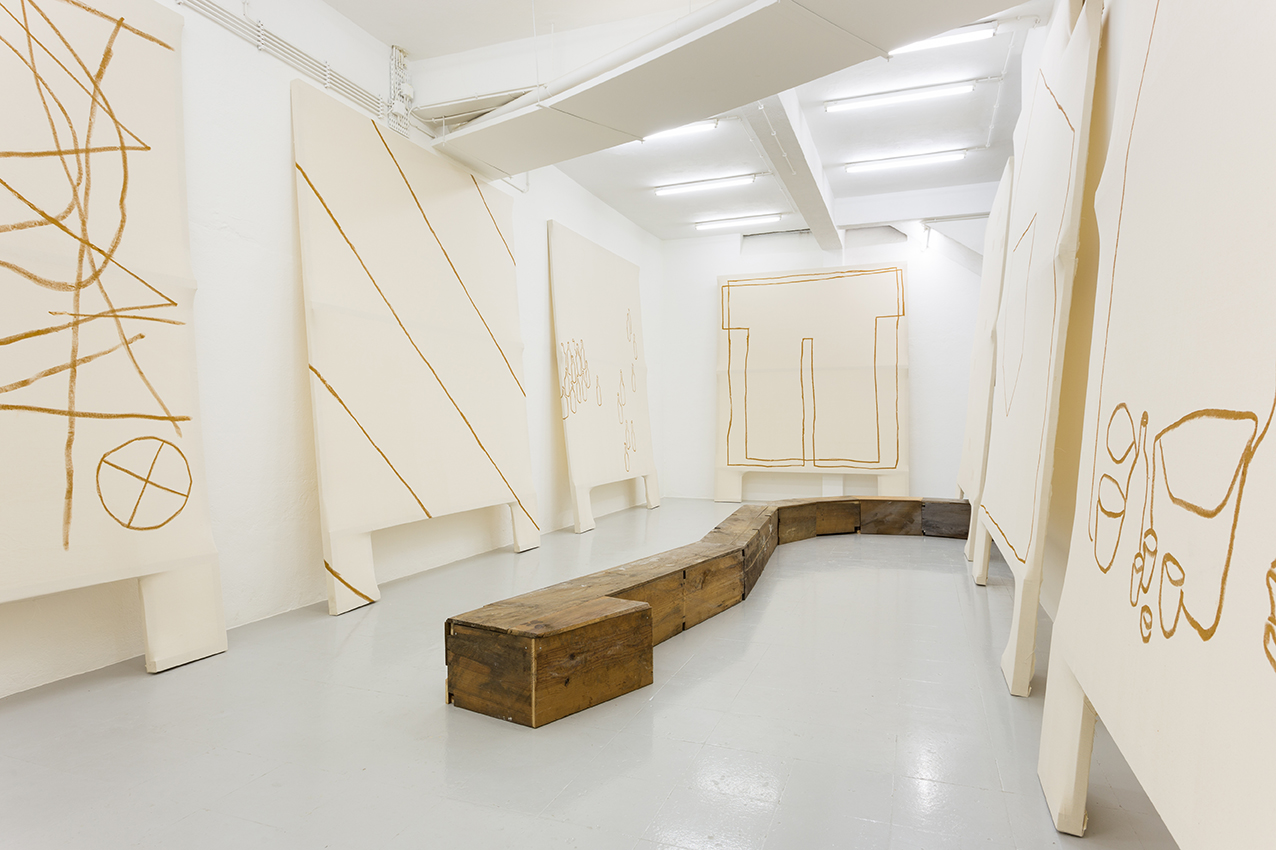 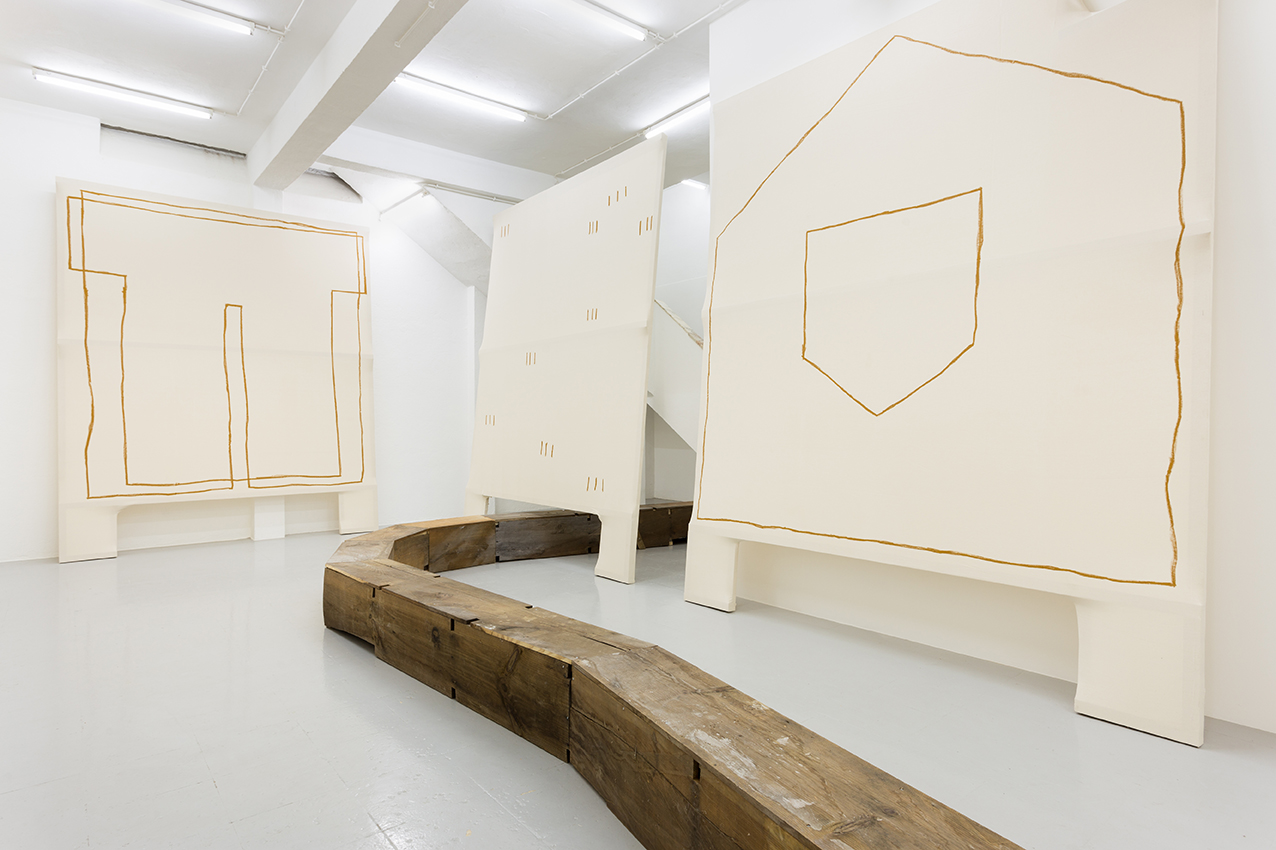 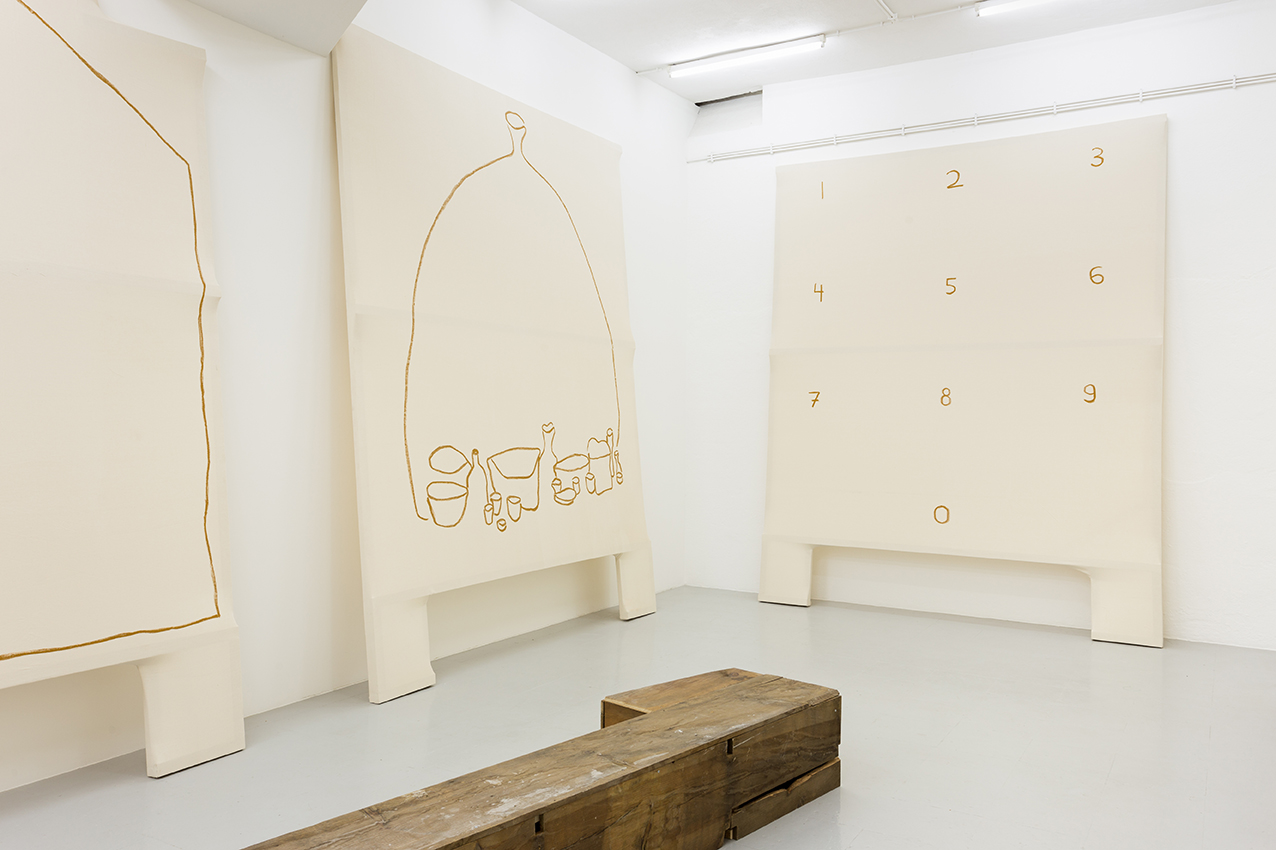 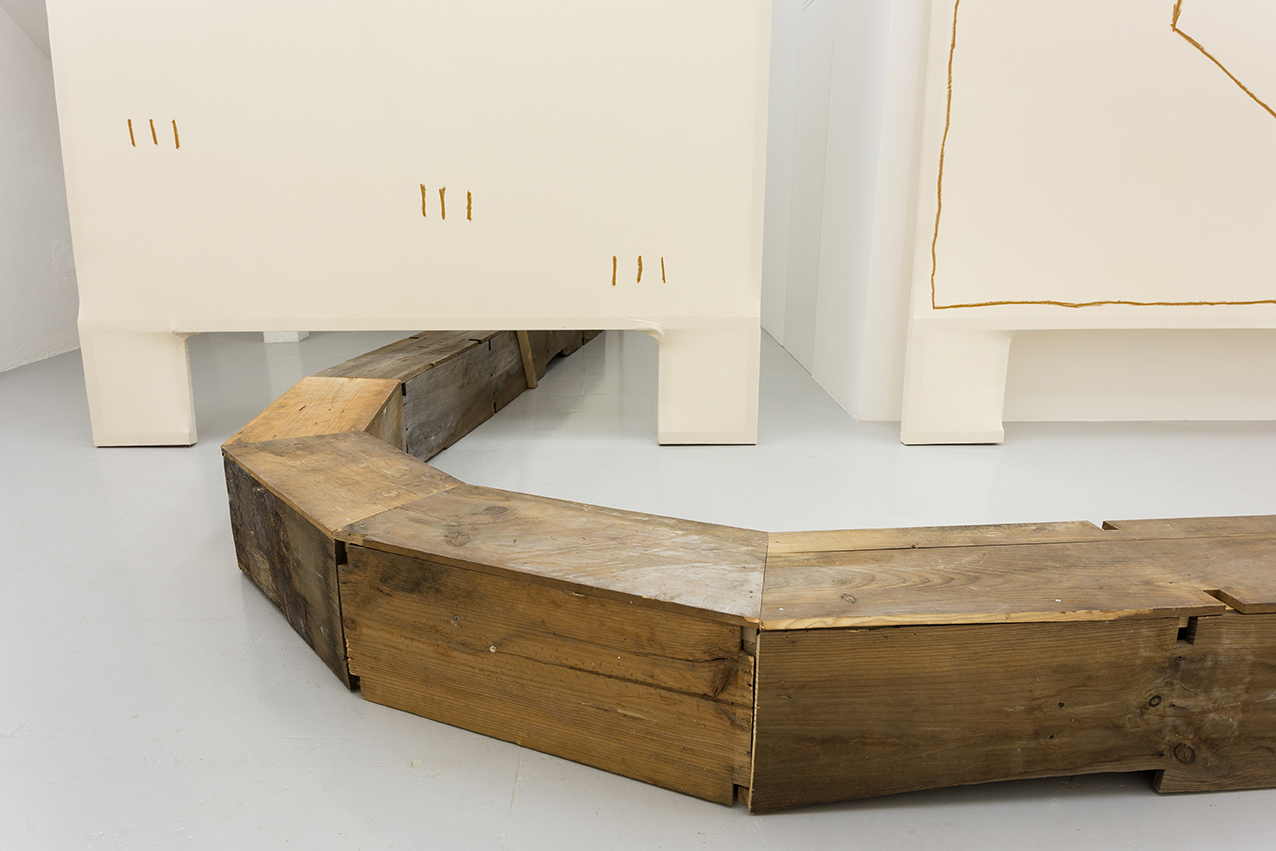 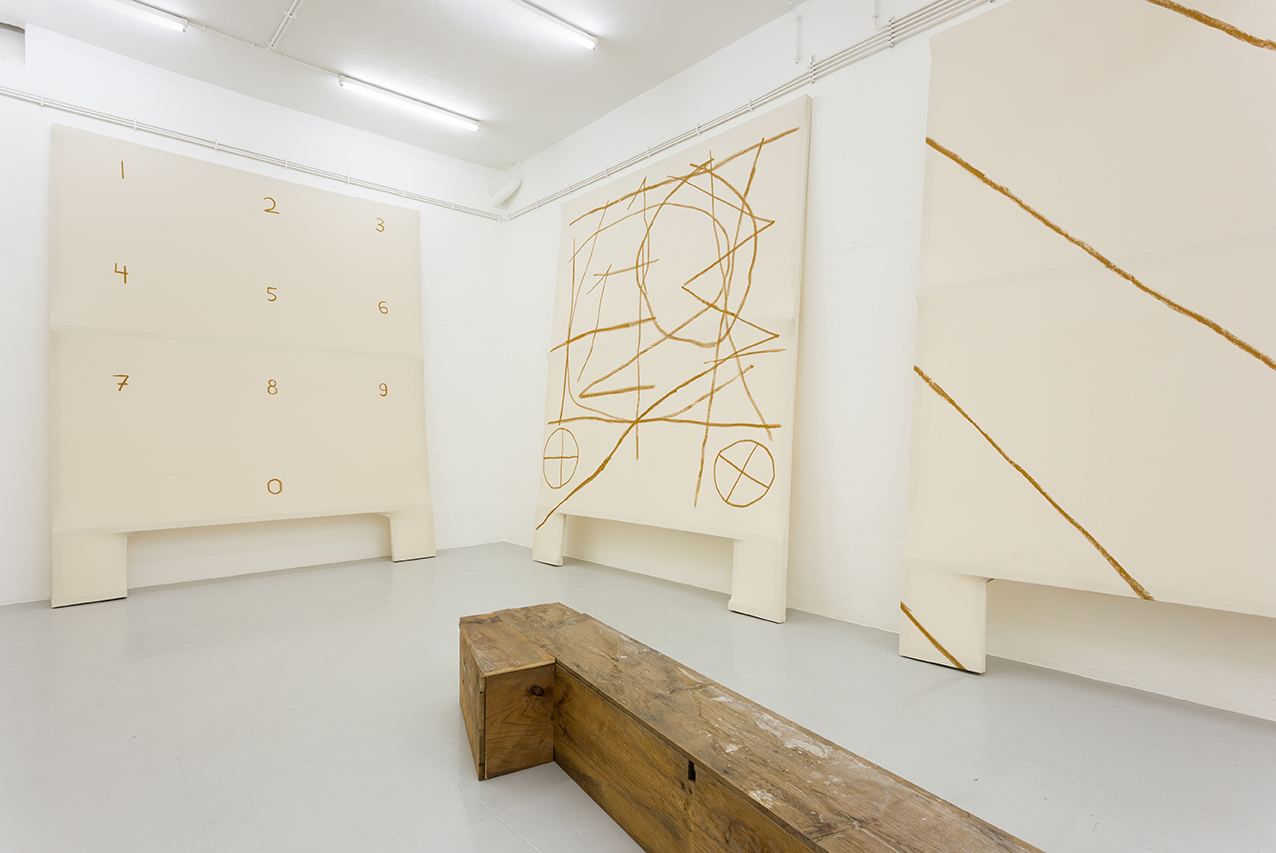 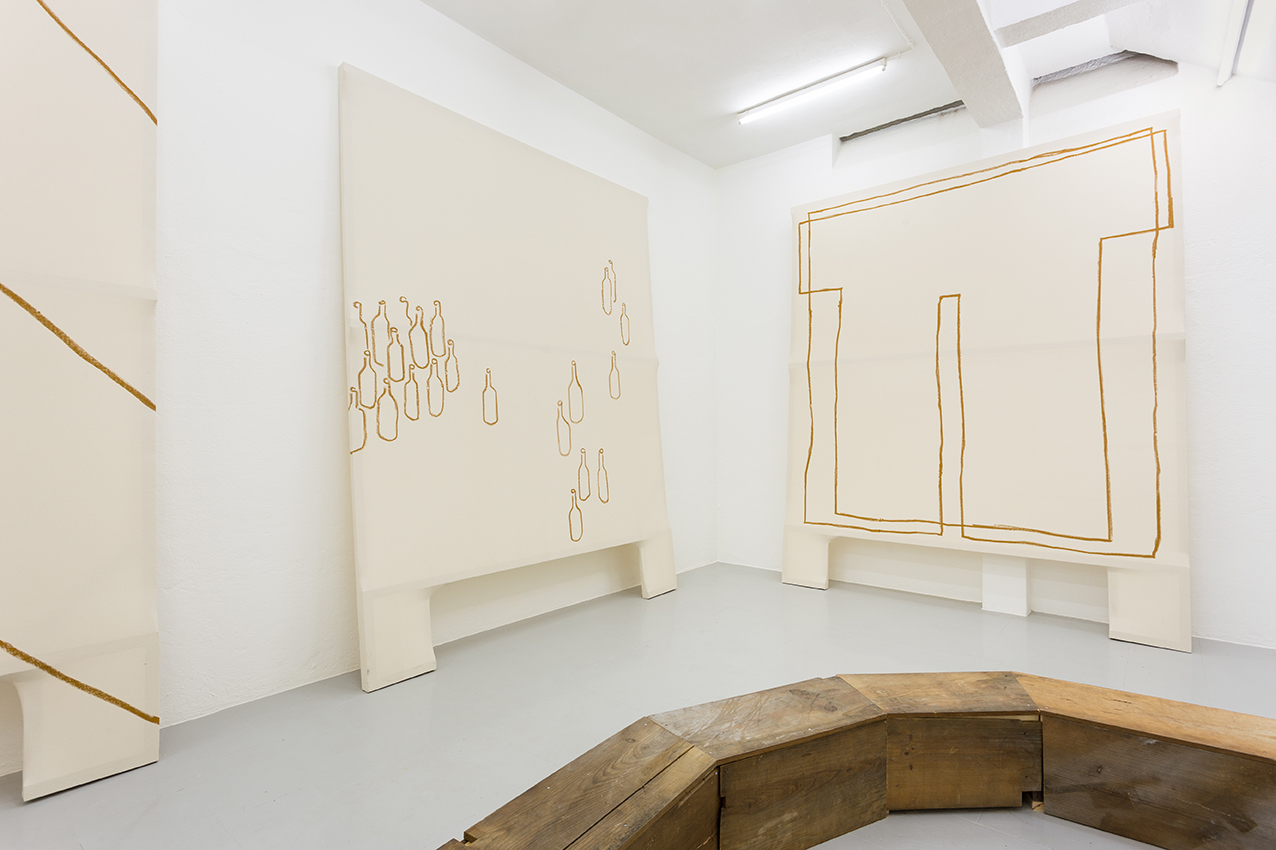 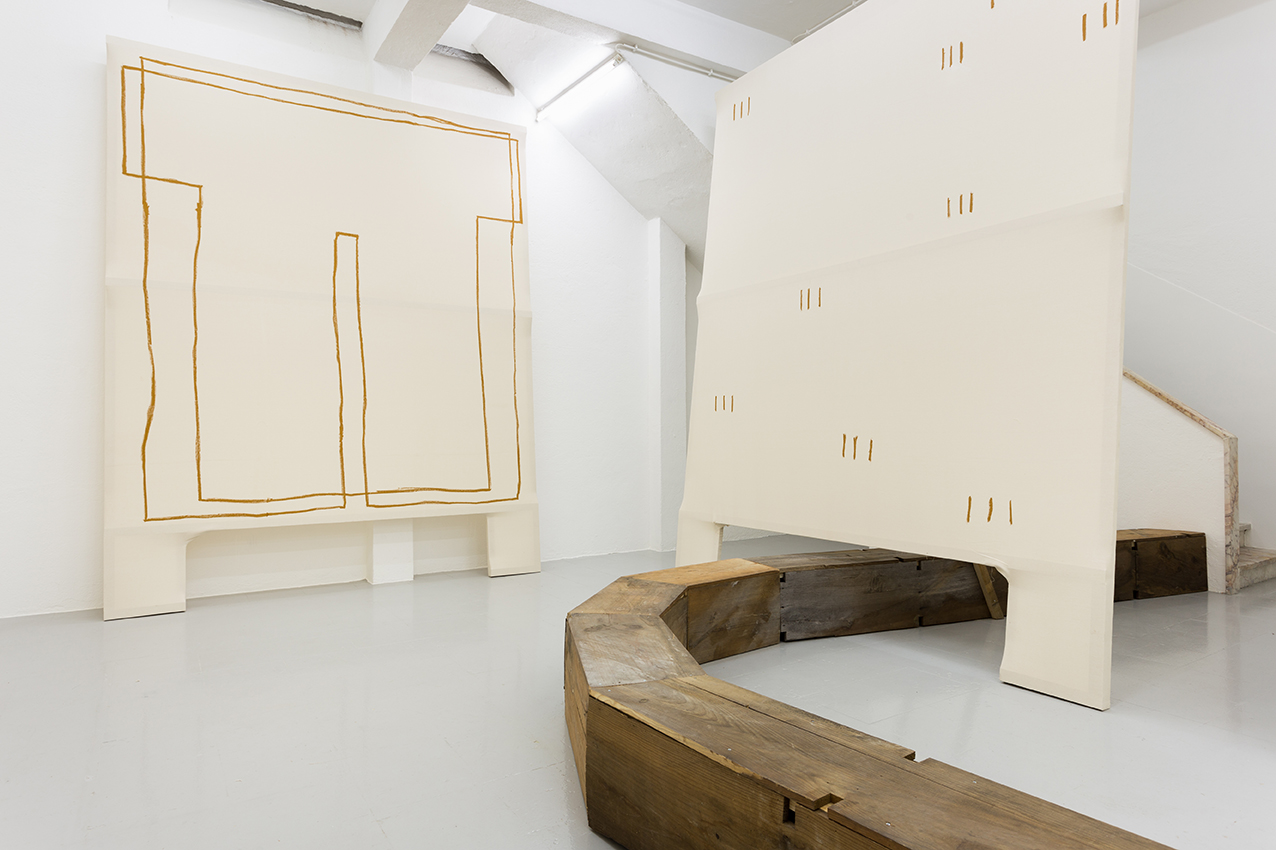 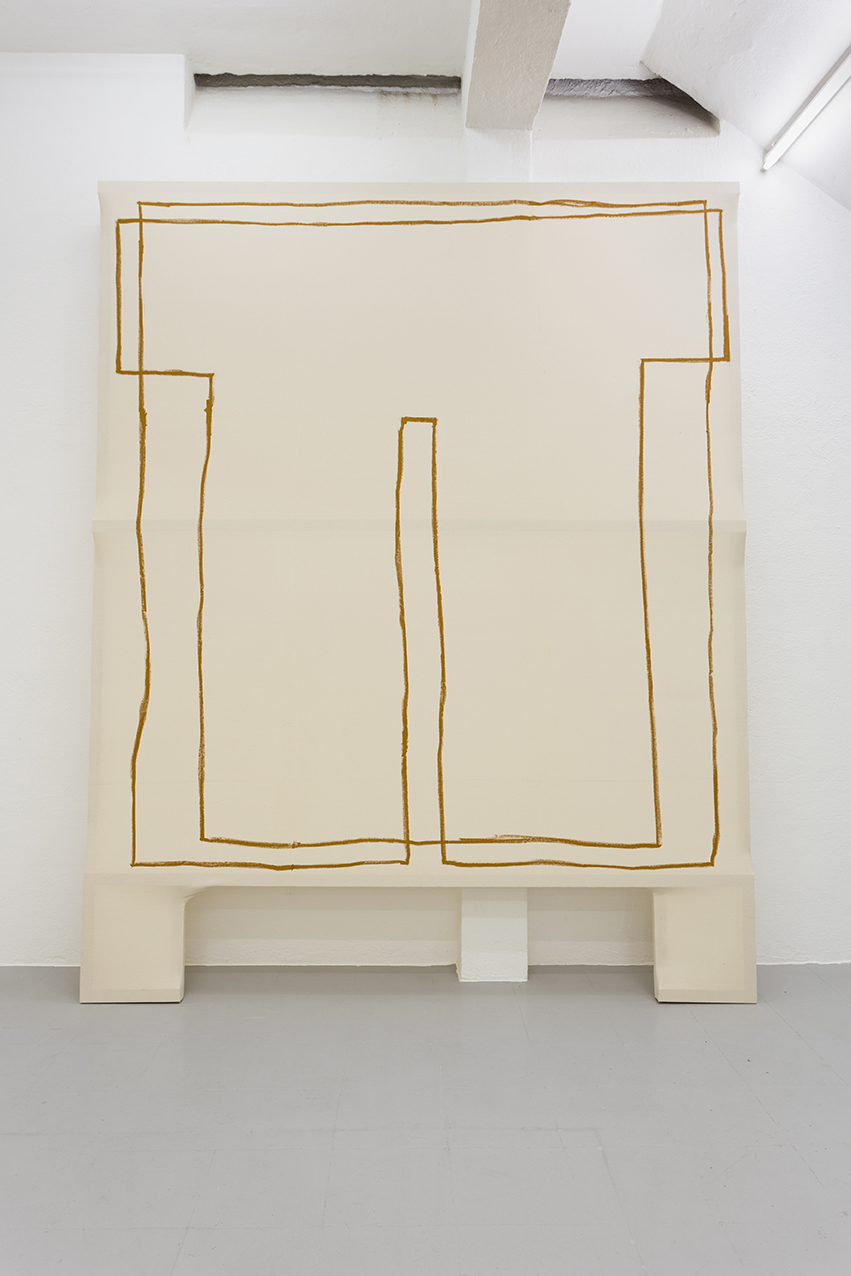 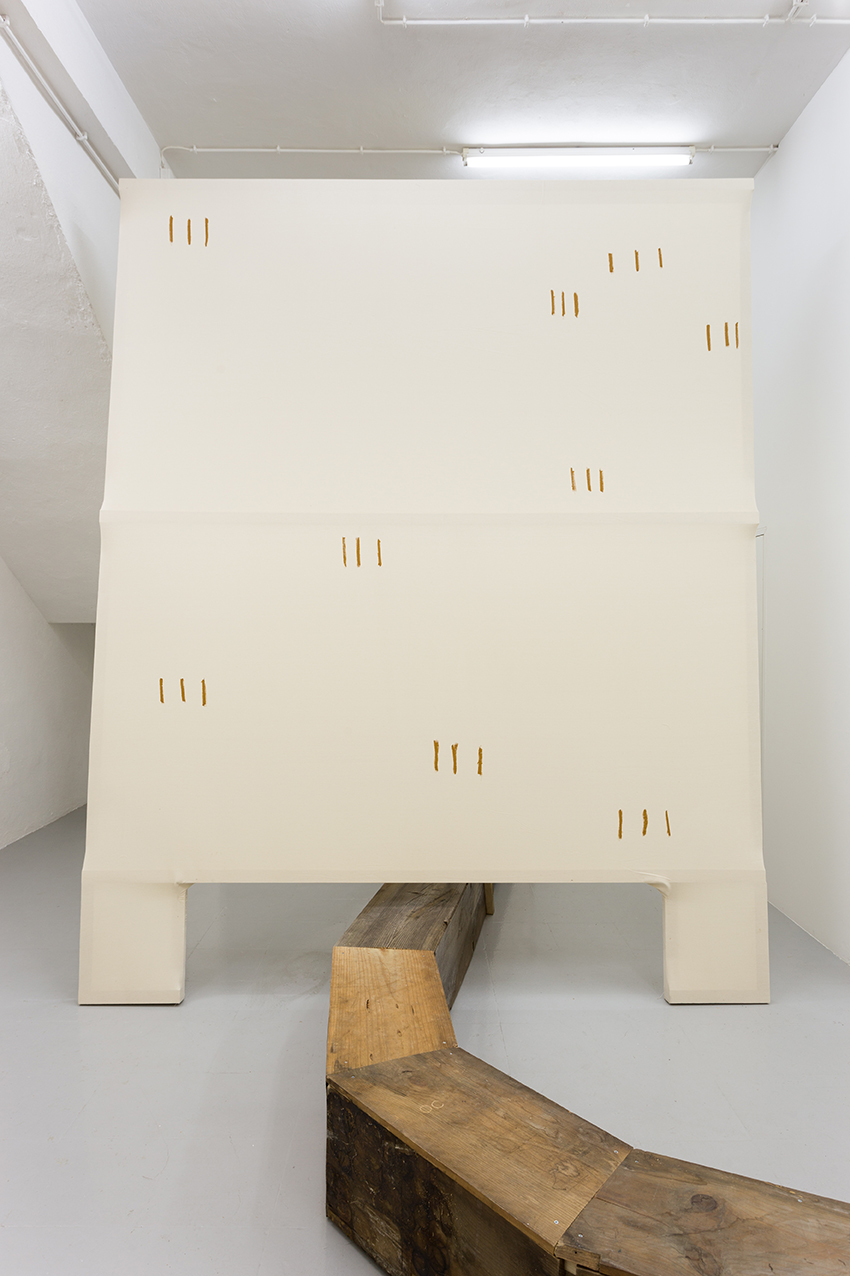 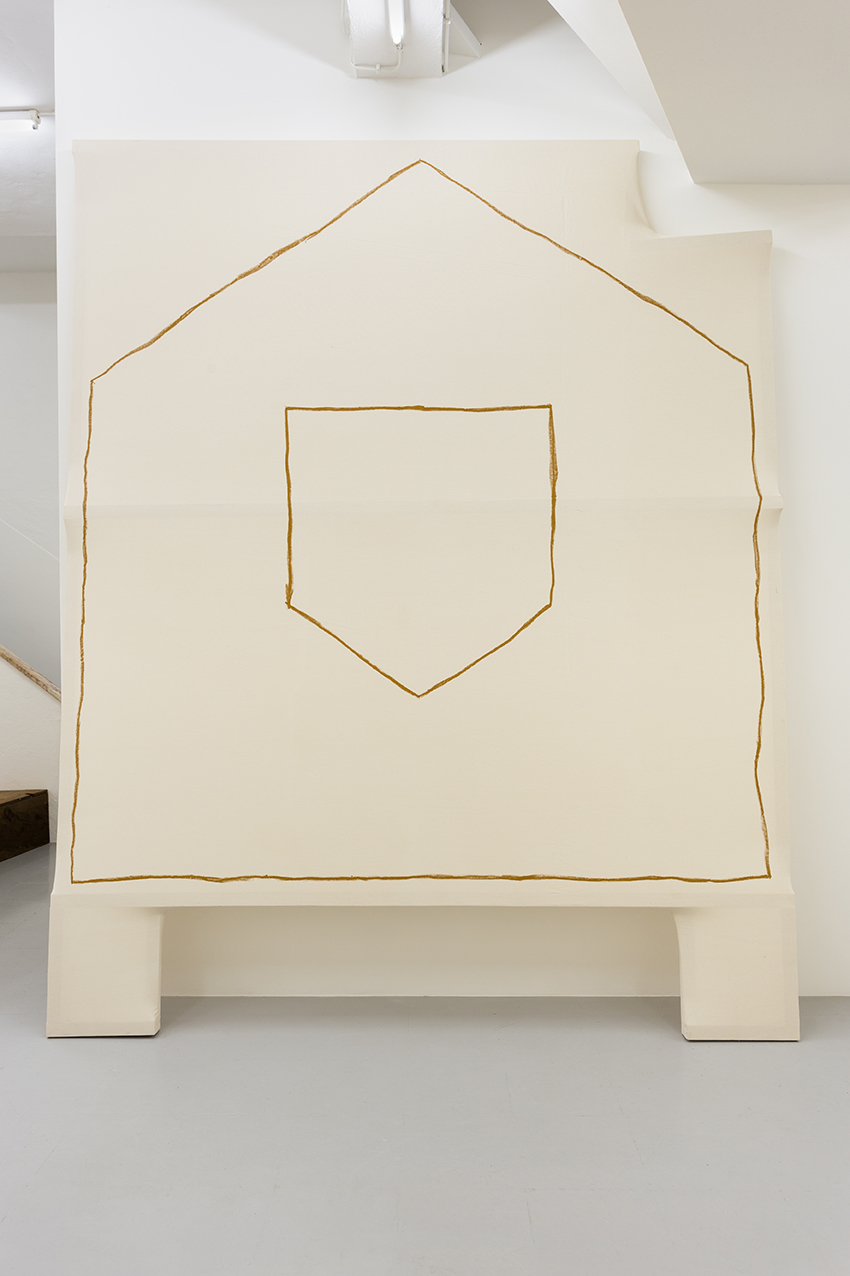 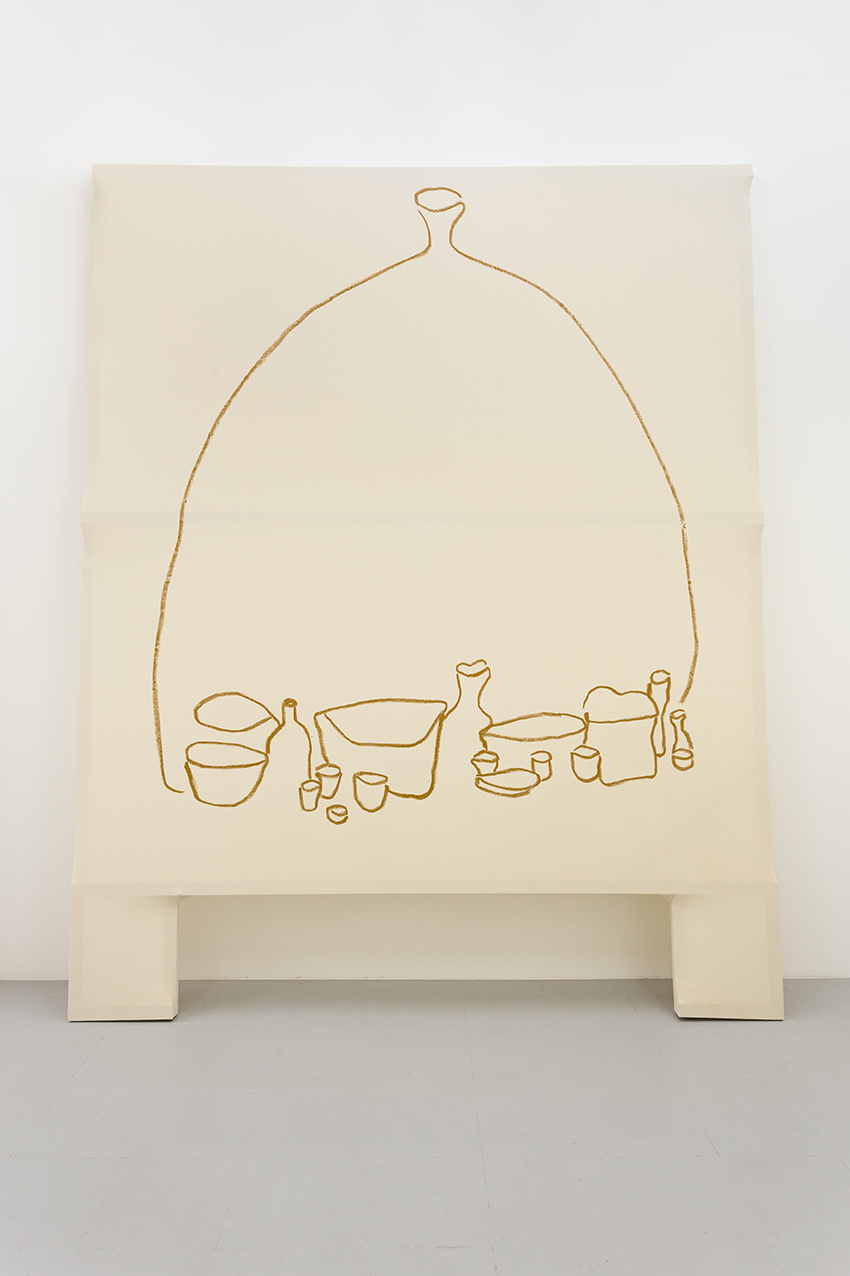 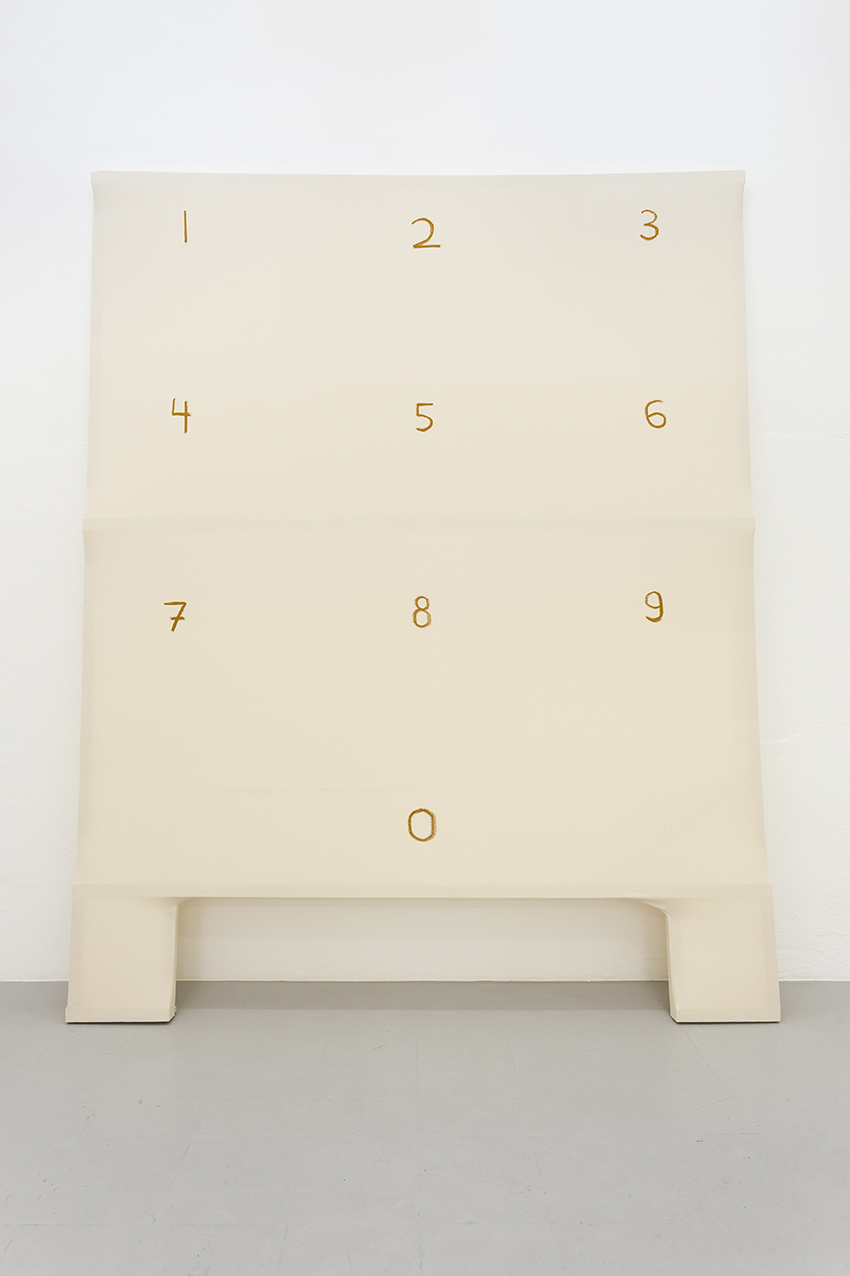 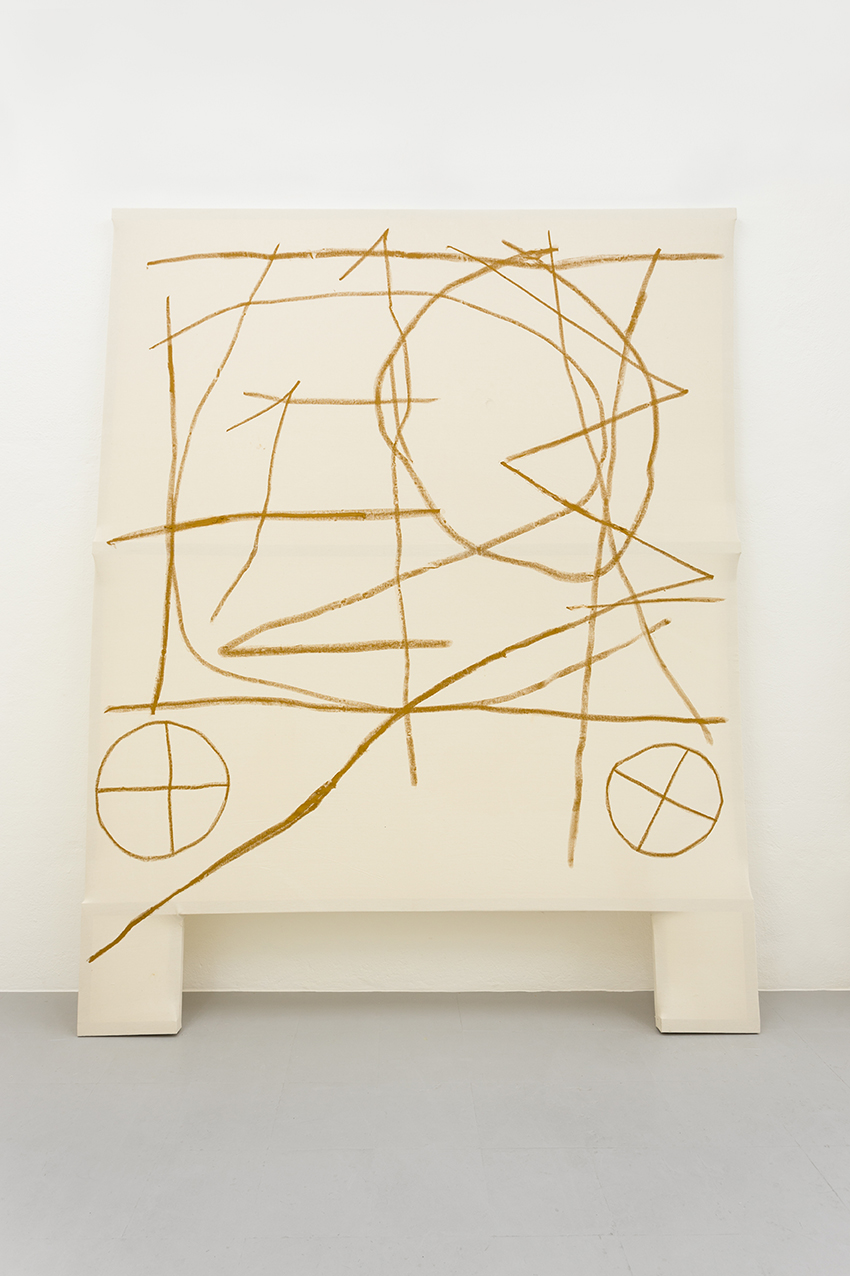 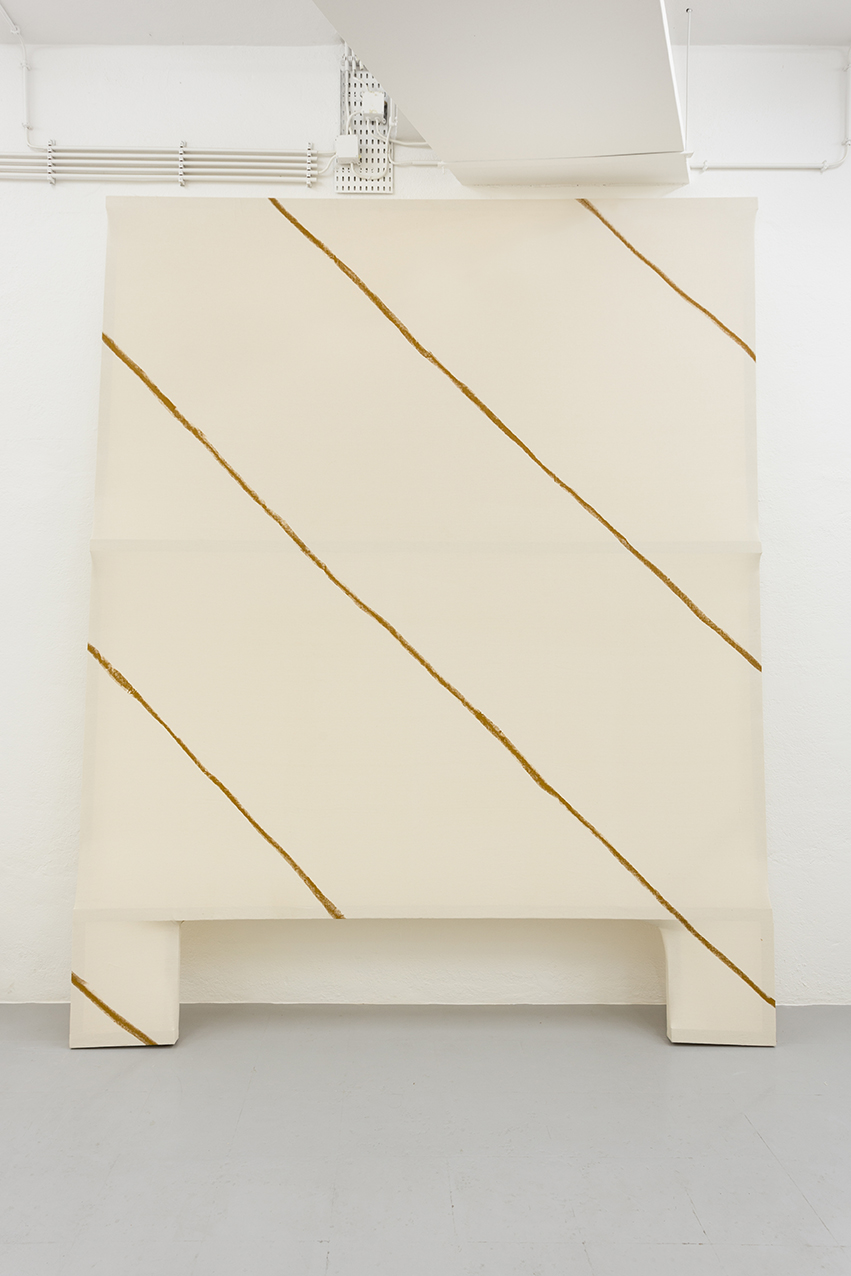 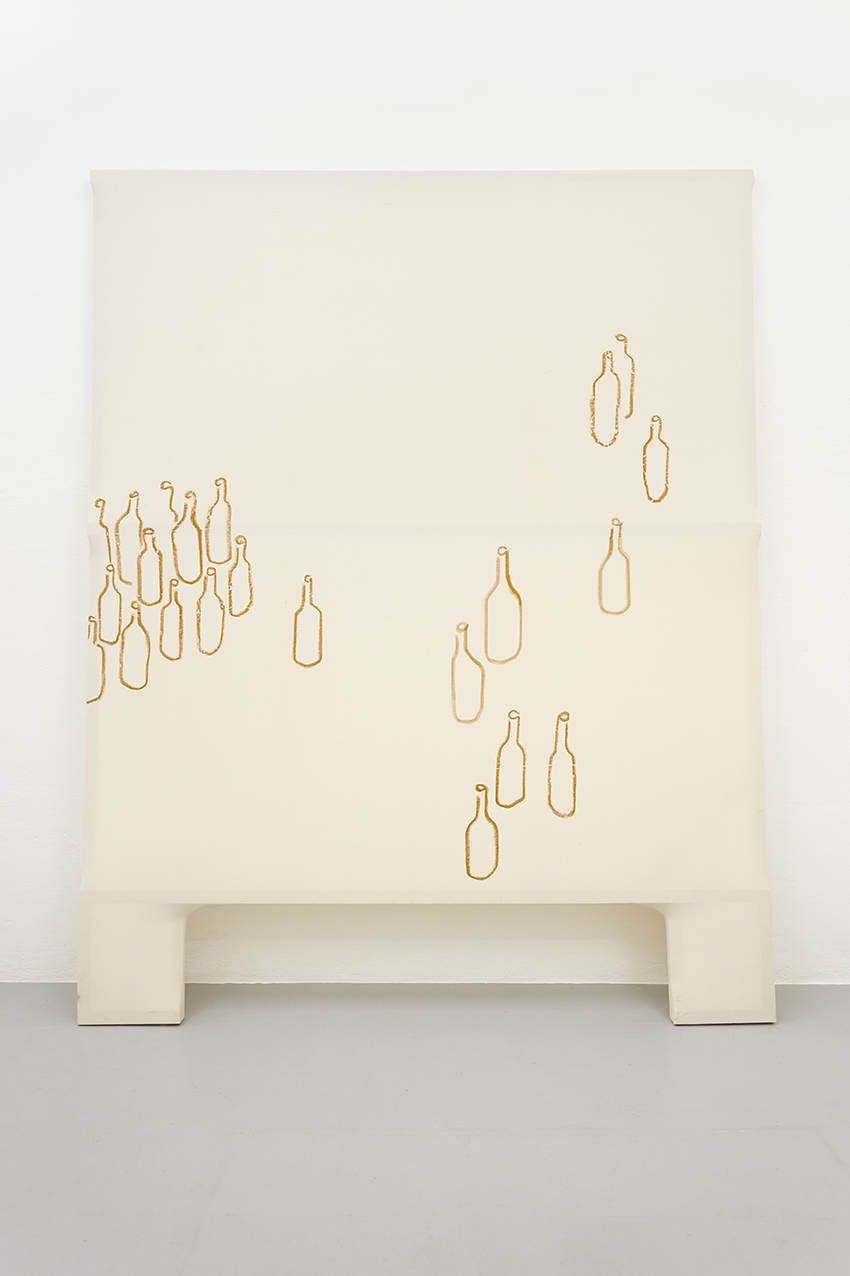 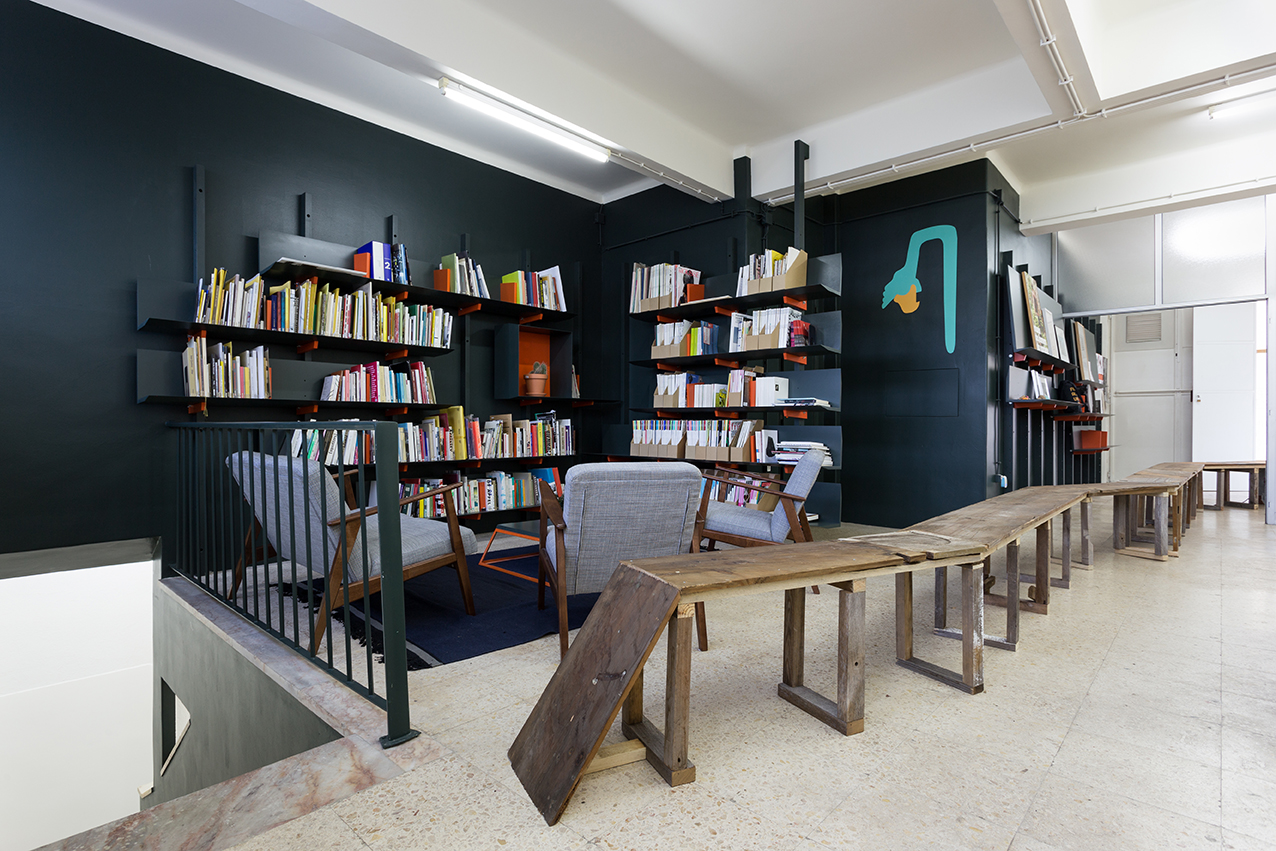 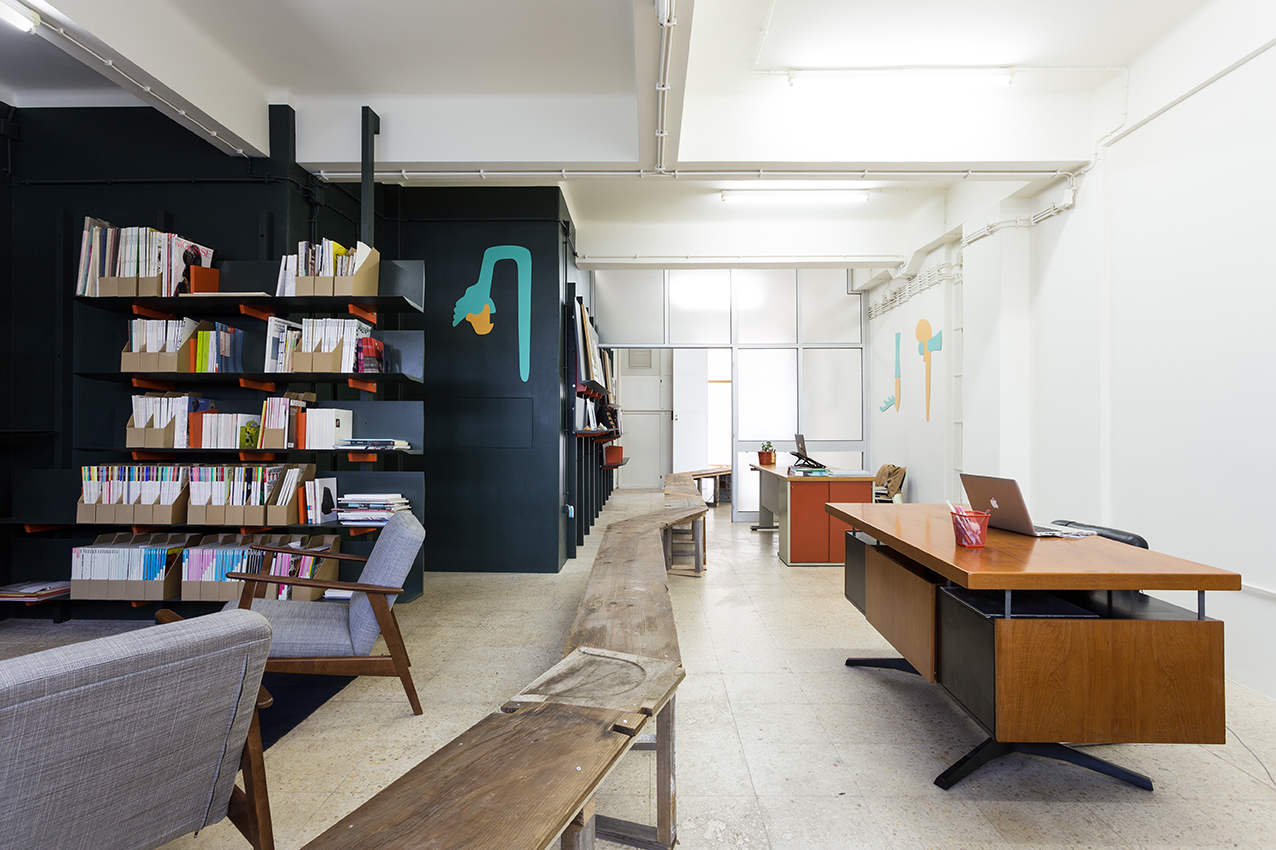 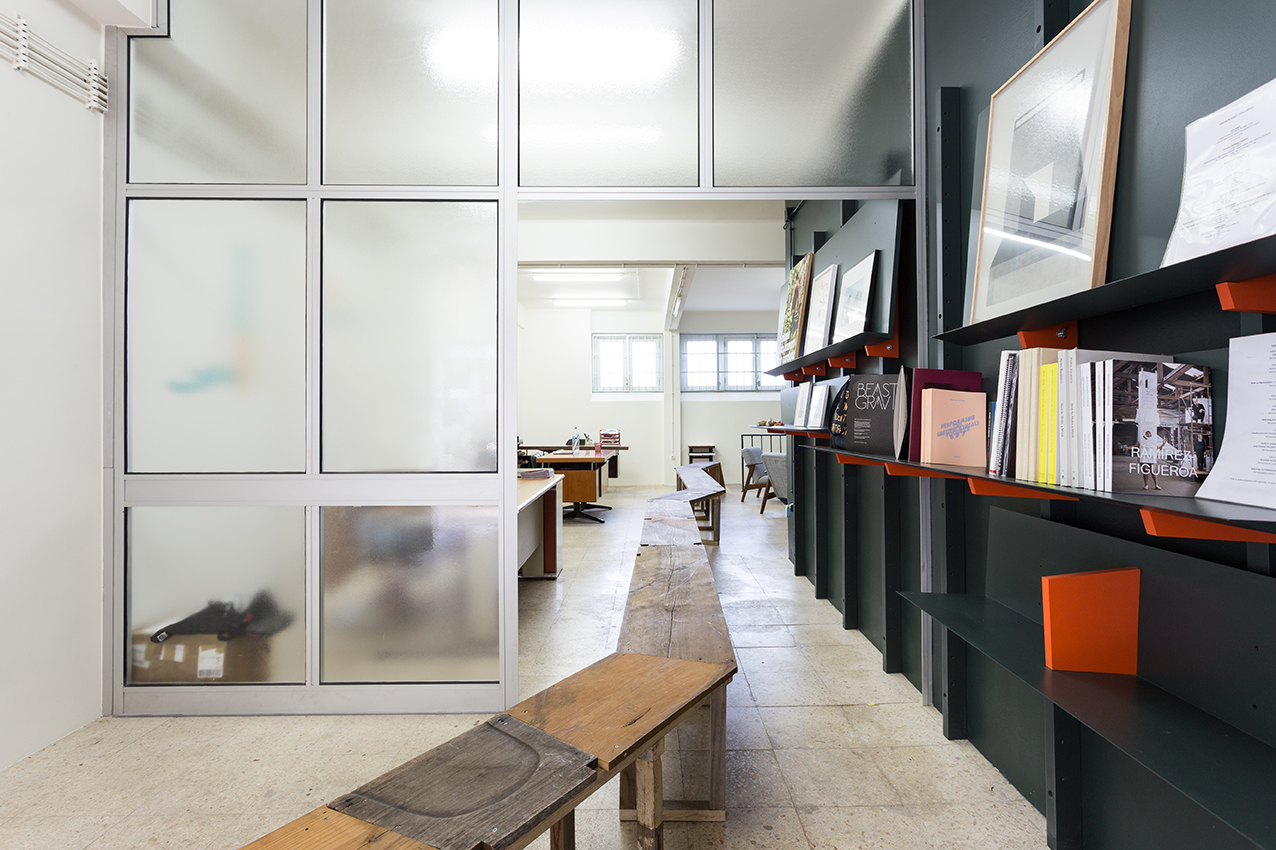 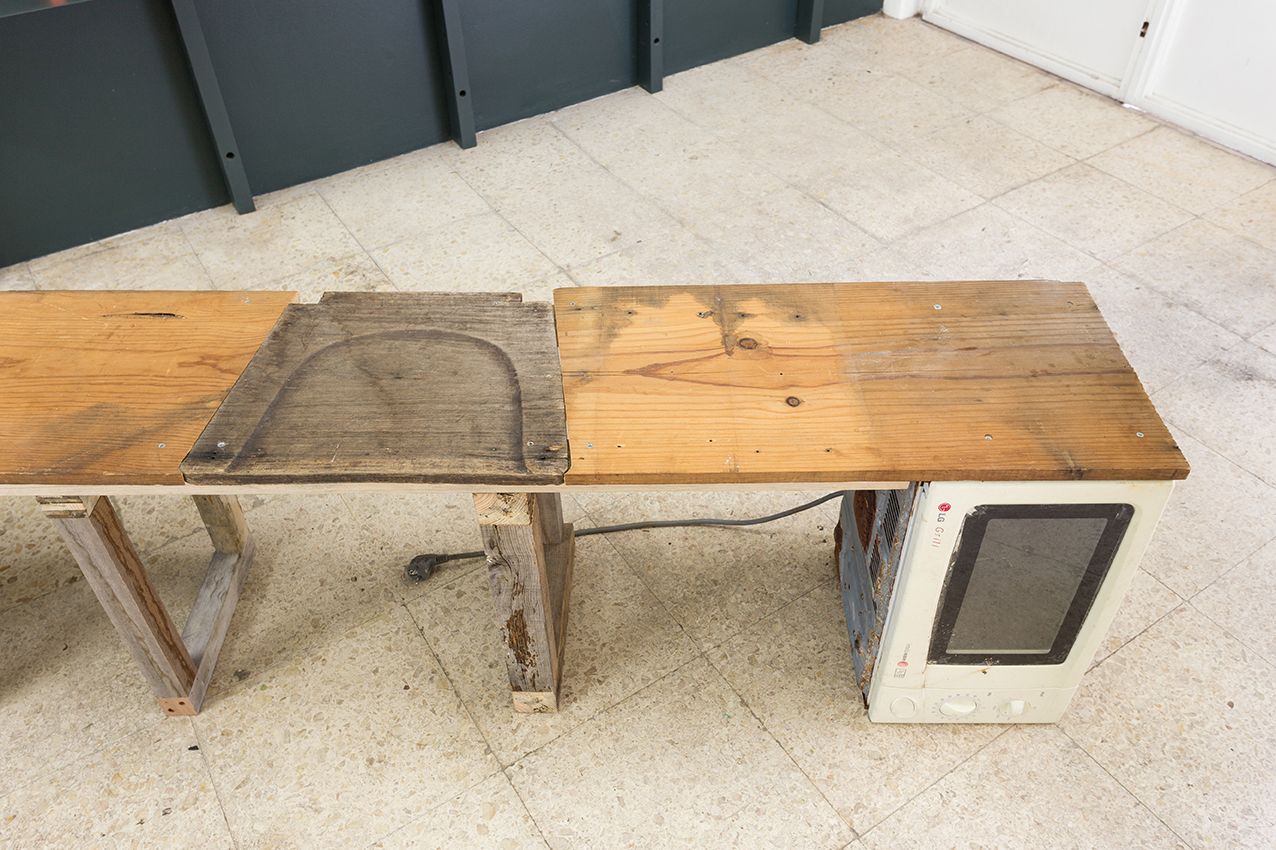 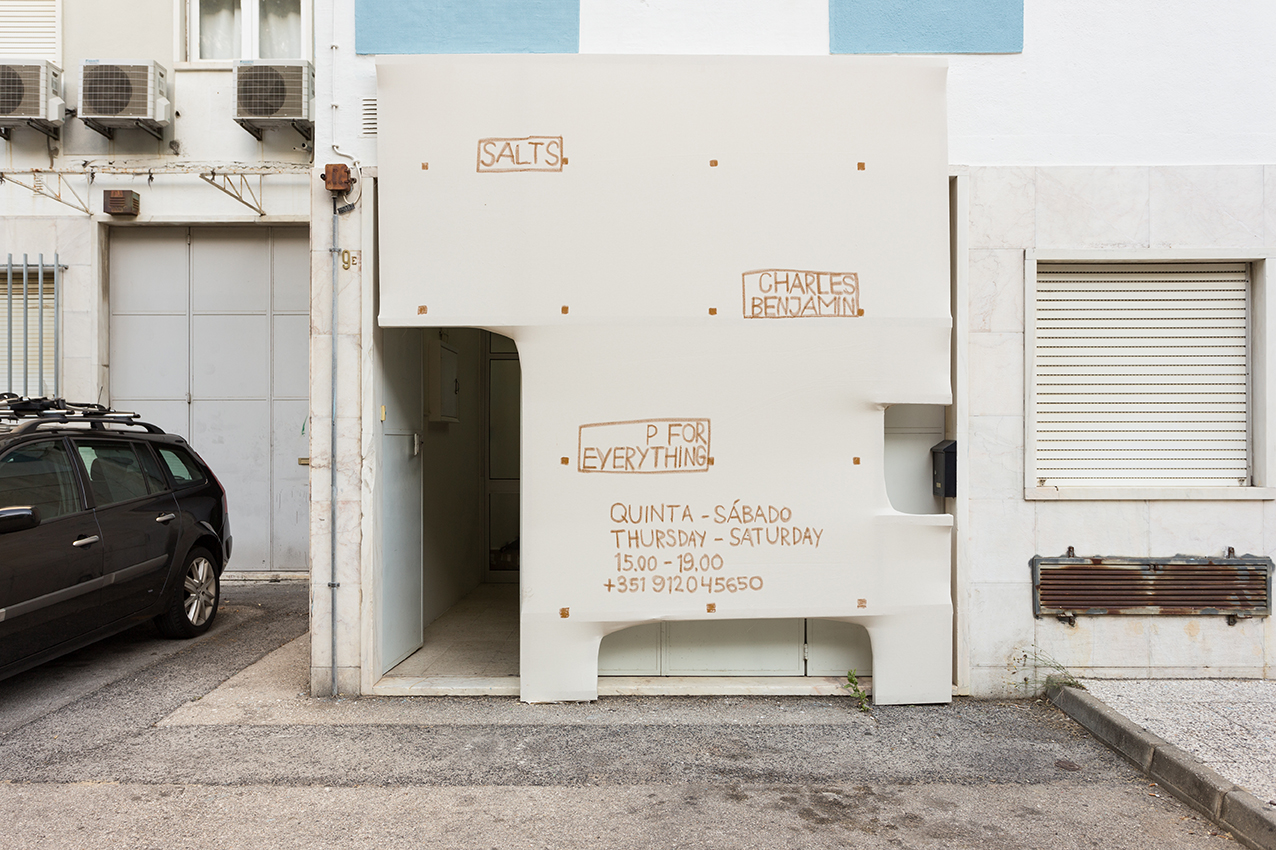 Kunsthalle Lissabon presents P for Everything, an exhibition by Swedish artist Charles Benjamin featuring new paintings specifically devised for the gallery space. P for Everything stages a set of oversized canvases that depict life on an epic scale. From snapshots of a quiet interior life to aspirational hallmarks, the paintings expand motifs to the level of larger than life protagonists: a still life, an ethereal mobile, a calculator, a t shirt and pants, a house within a house, parquet flooring, a lawn. Hyper minimalist and proto-naïve, the ochre line of the oil stick presents viewers with a lodestar to guide them through the space. In its oily tint, the paint is further redolent of the smeary logbook a mechanic may use to keep track of ongoing work on their engine. The canvases may then be viewed as a ledger, charting the shape and technicality of things in case one should forget. Like the logbook, the canvases act as both index and record for an ongoing process of material adjustment.
For Not Old Not New at SALTS in 2018, Benjamin had similarly installed a set of awkwardly shaped canvases fitted to the dimensions of the space. Squeezed into the subterranean space of Kunsthalle Lissabon, the canvases of P for Everything take this conceit further: Benjamin has stretched the cloth of each canvas downward over rickety feet. The effect brings to mind houses comically perched on stilts, or hulking bodies vying for room. In doing so, the artist deliberately avoids the preciousness bestowed on the genre of painting. Following rough and ready methods and designed for quick disassembly, the canvas stretcher was assembled in the exhibition space and the frames produced from wood blanks sourced at a nearby wood trader.
With its focus on process rather than exalted objects, P for Everything sets the temporal economy of painting front and centre, with the artist trading his works for the equivalent of a month s rent, services, or otherwise leaving them at an Autobahn rest stop for an impromptu pop up show hosted by friends. The sparse canvases may thus be read as an extension of the artist’s daily activities, rather than as, per a western canon of painting, a means of gilded storytelling. This spiritual quest to free objects from longstanding traditions amounts to something like savouring a minor poetics of the everyday.
P for Everything stands for everything an image can and wrestles to be.
Charles Benjamin (*1989, Stockholm, Sweden) is a painter based in Berlin. He often uses his practice to explore personal problems, at once formally documenting and making fun of economical hardship, spiritual depletion, and disbelief in his own ability and the medium itself. His practice apart from painting sometimes branches out in periodical projects such as living without any basic comforts on a gallery floor for two weeks (Being a better person (And Possibly Helping Others), 2016) or sitting under a tree for the time of an average work ing week (Work/Work Balance, 2017). His work has been shown at New Day Gallery and Mario Kreuzberg (both in Berlin), Espacio Falso (Santiago, Chile), St. Etienne Design Bienale and SALTS (Switzerland).