Sticky: Like a Summer Night at House of Egorn / Berlin 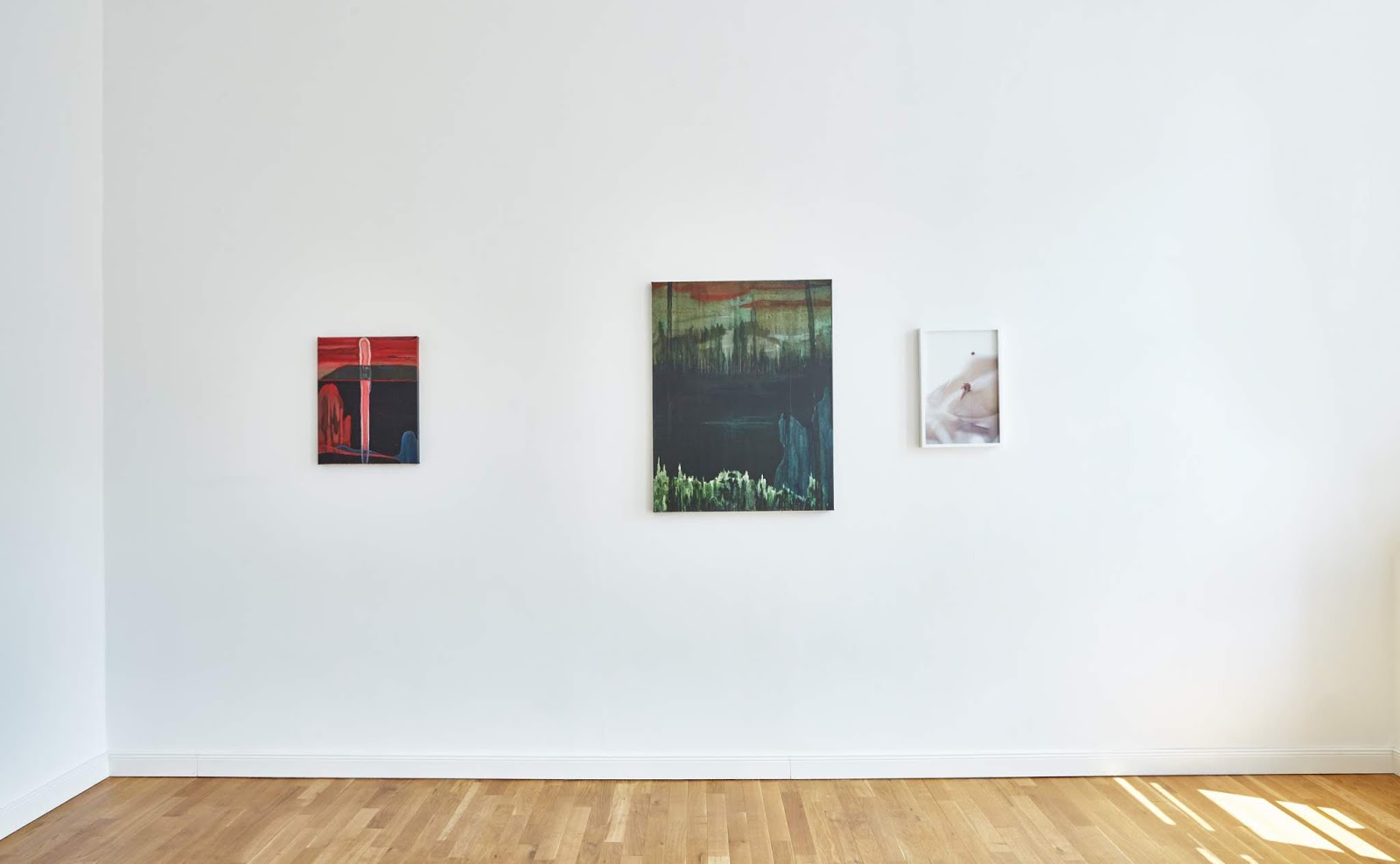 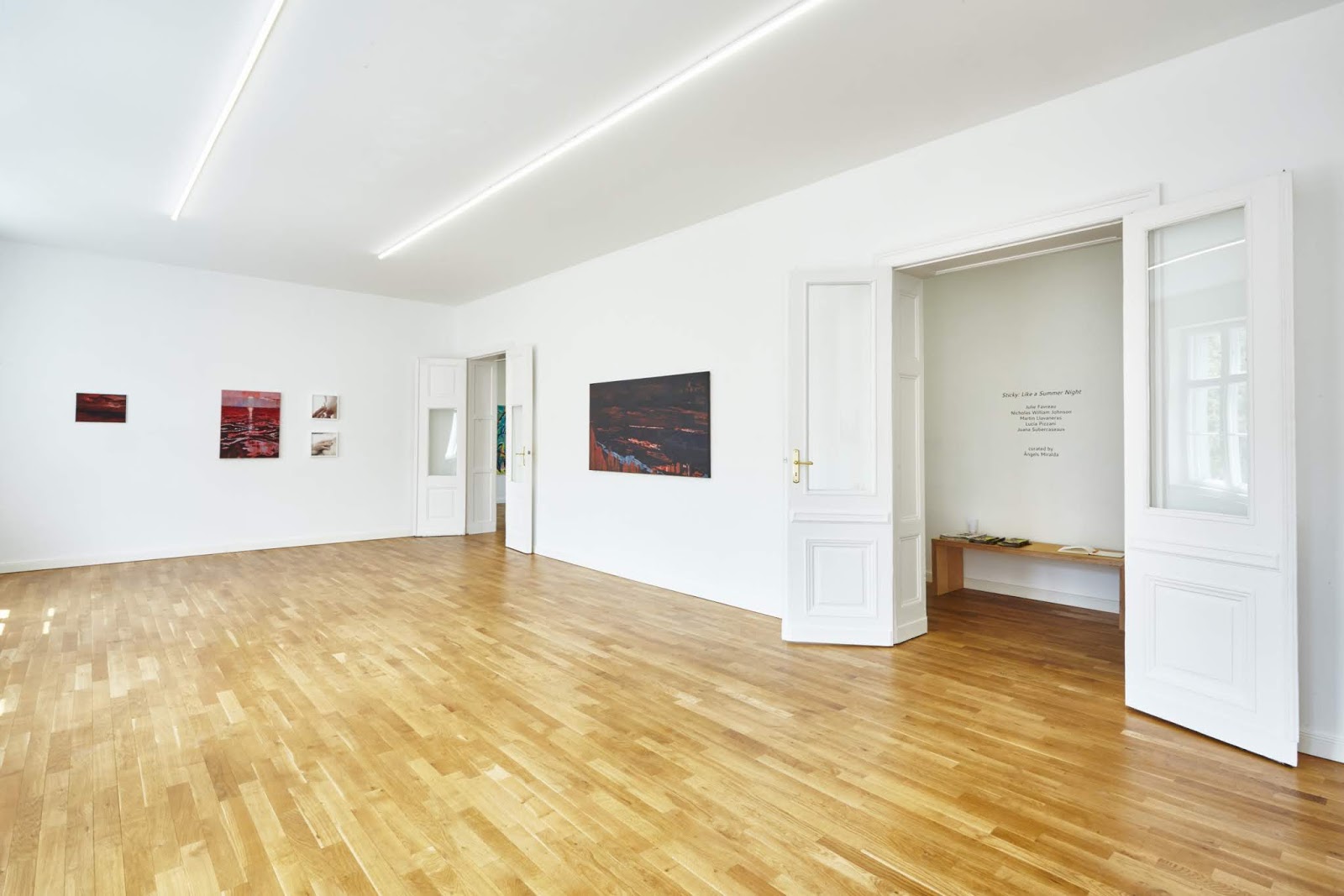 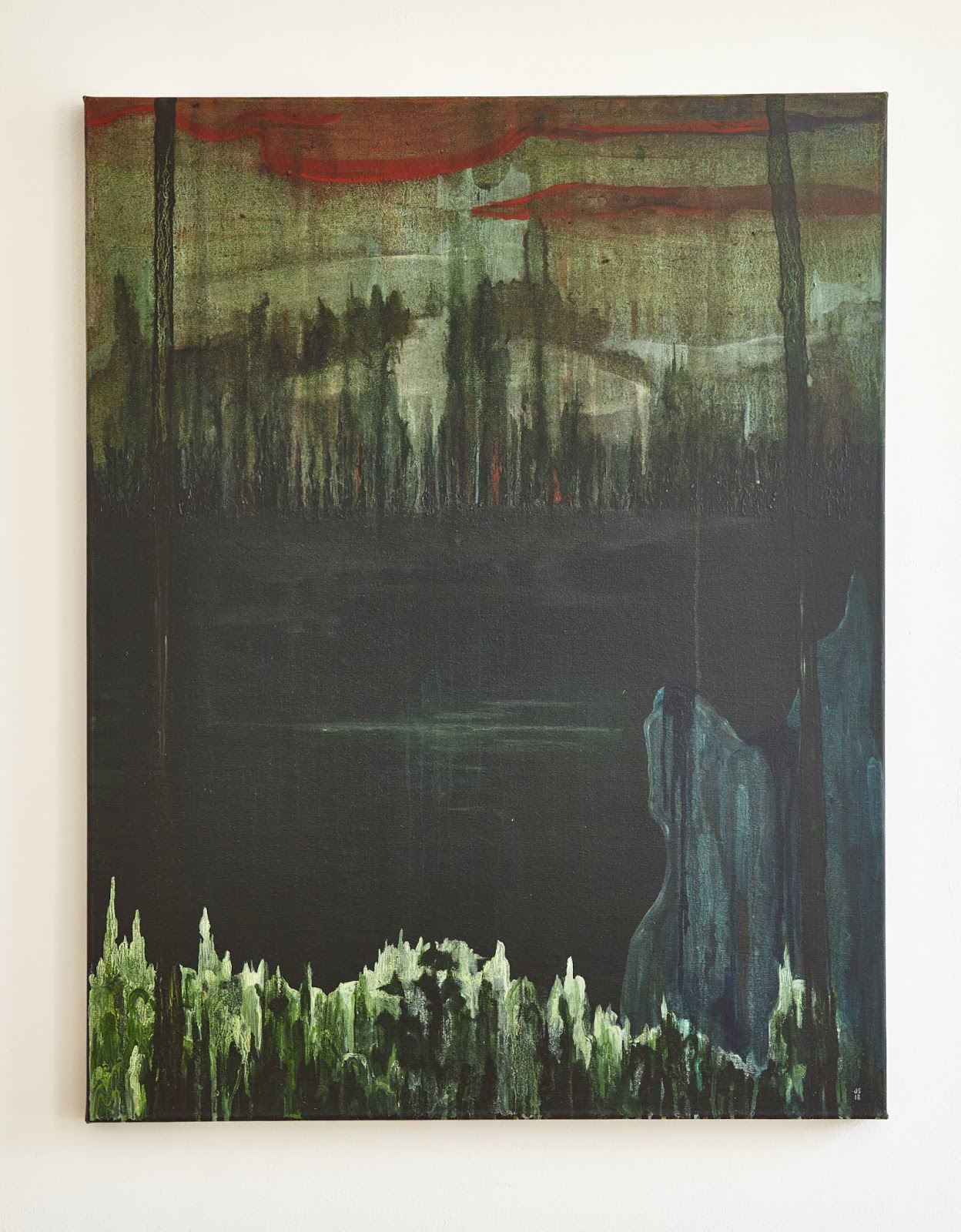 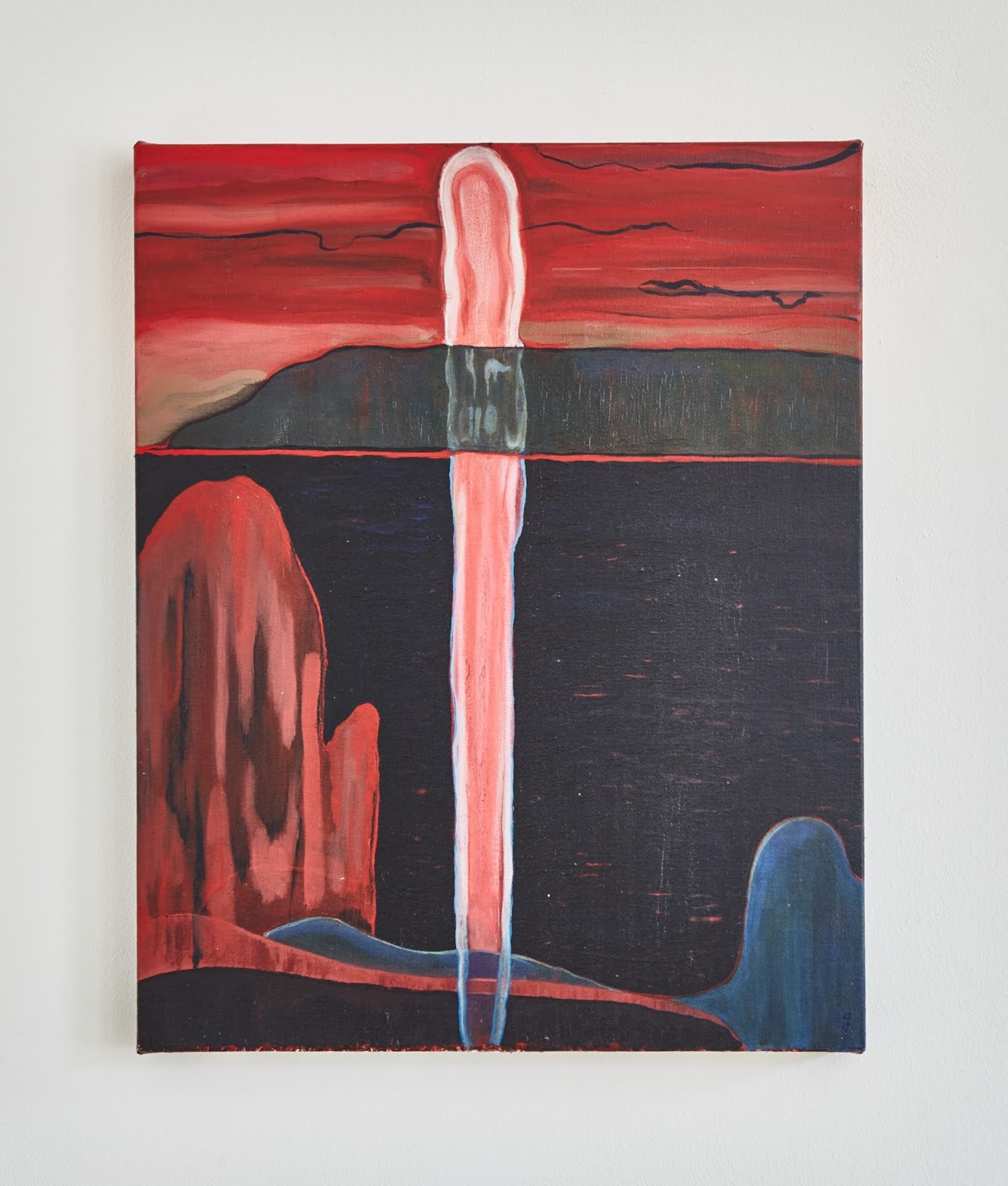 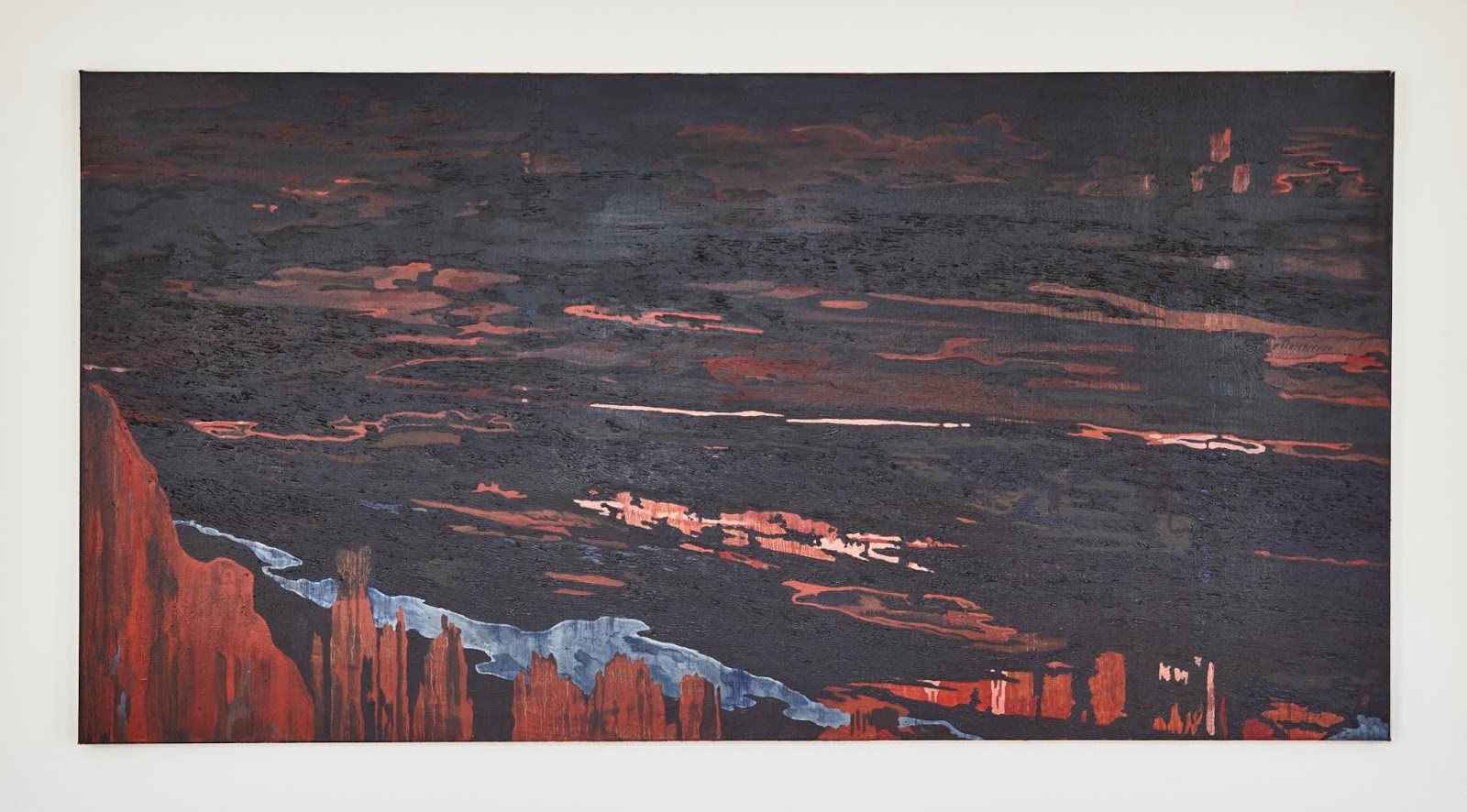 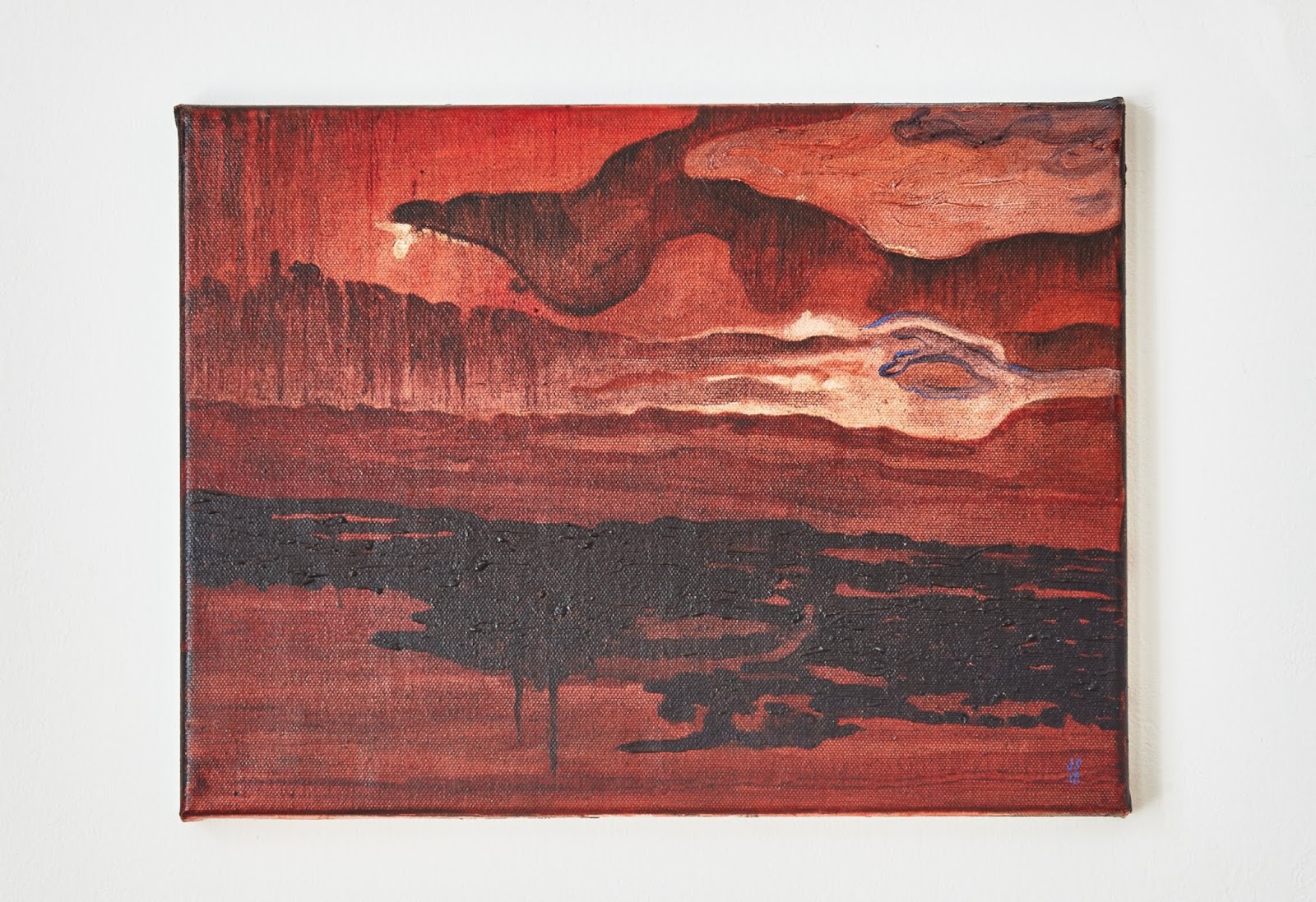 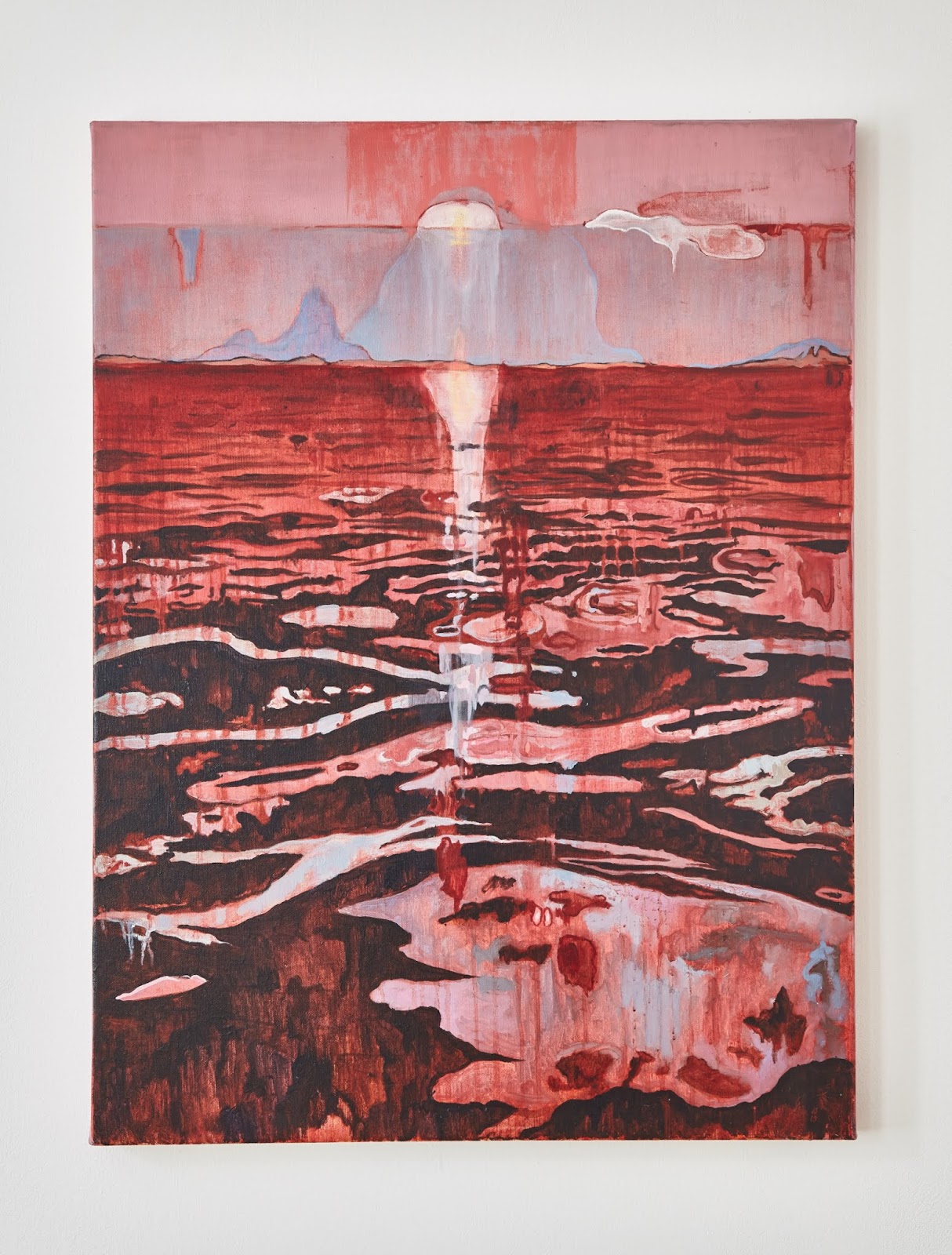 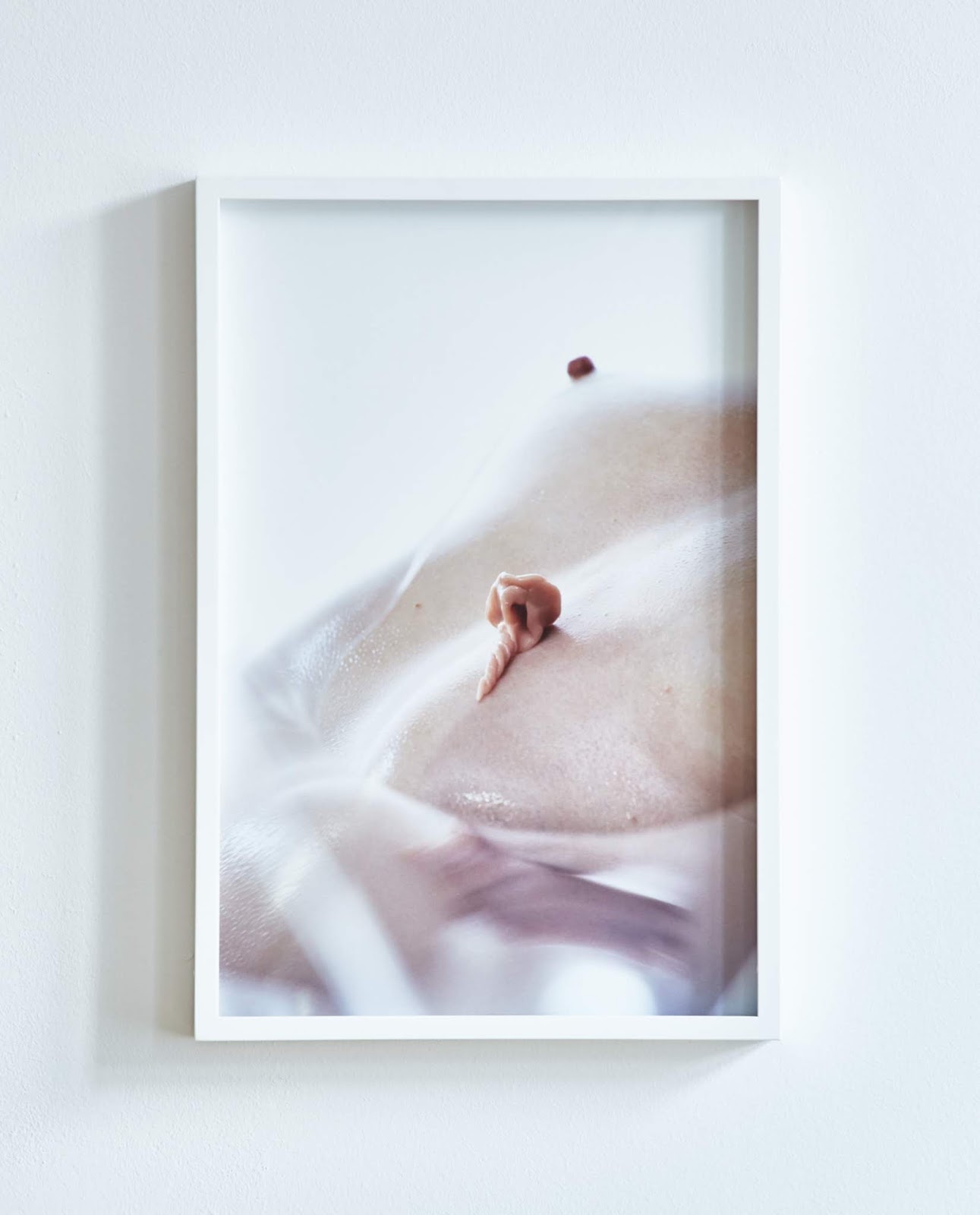 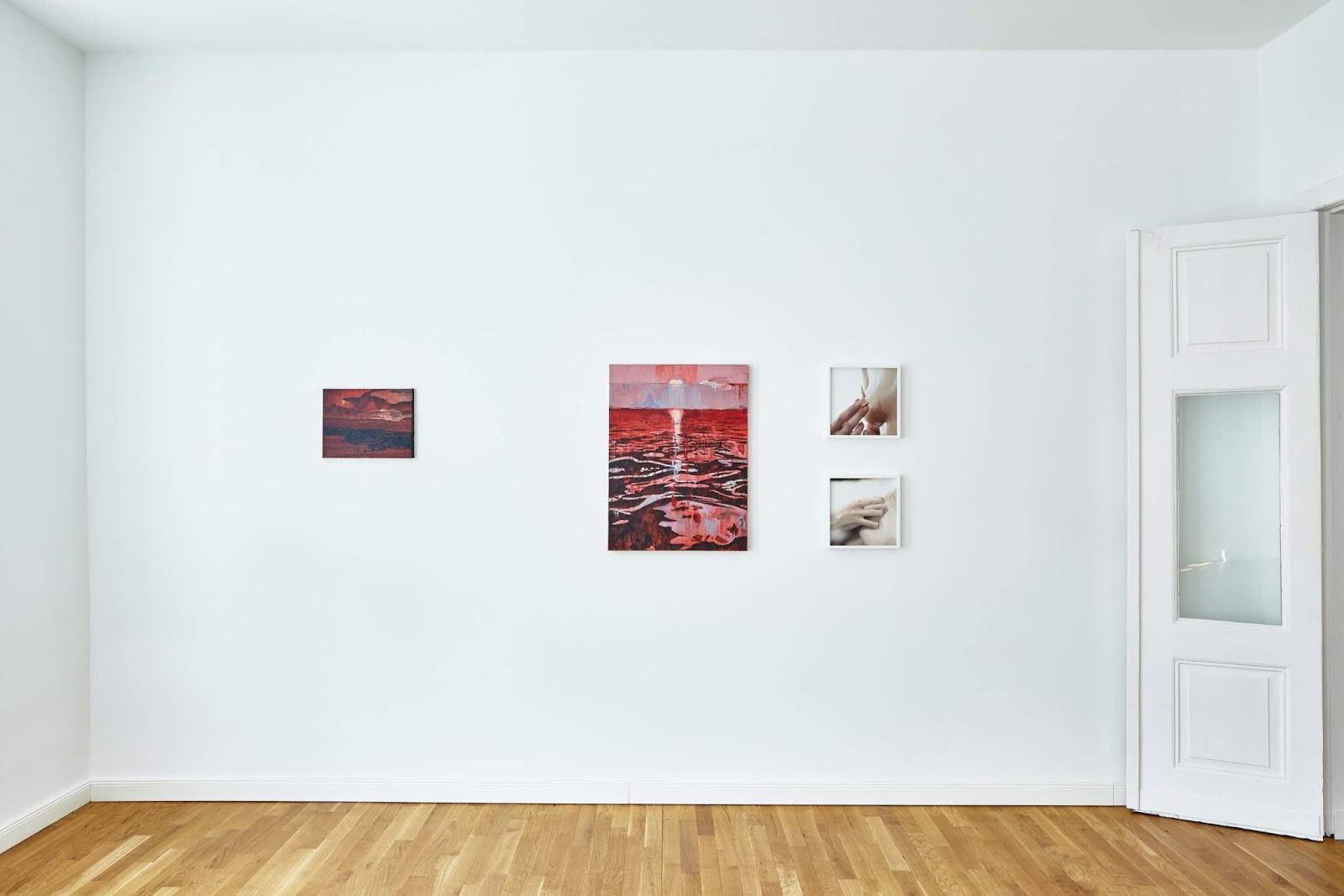 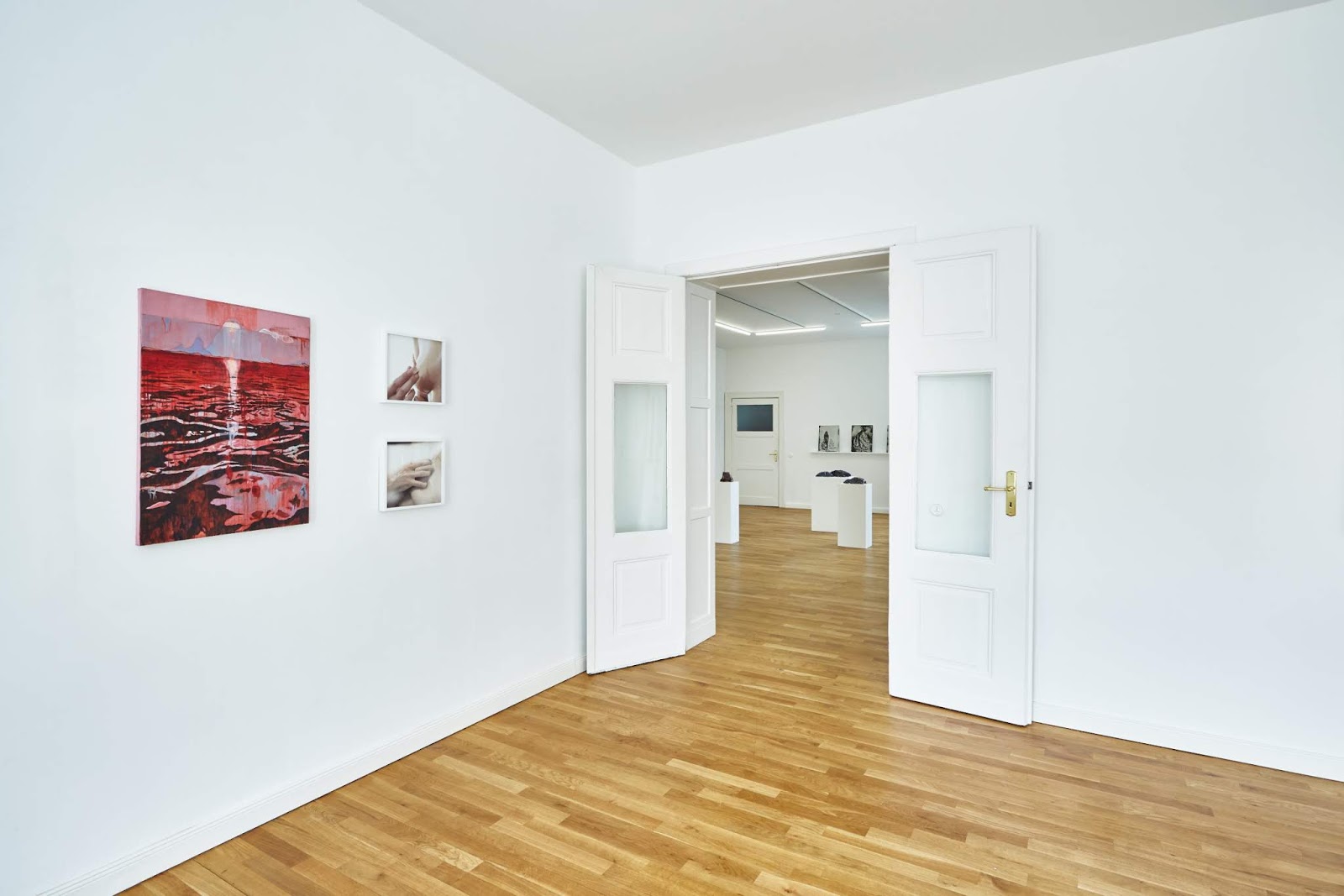 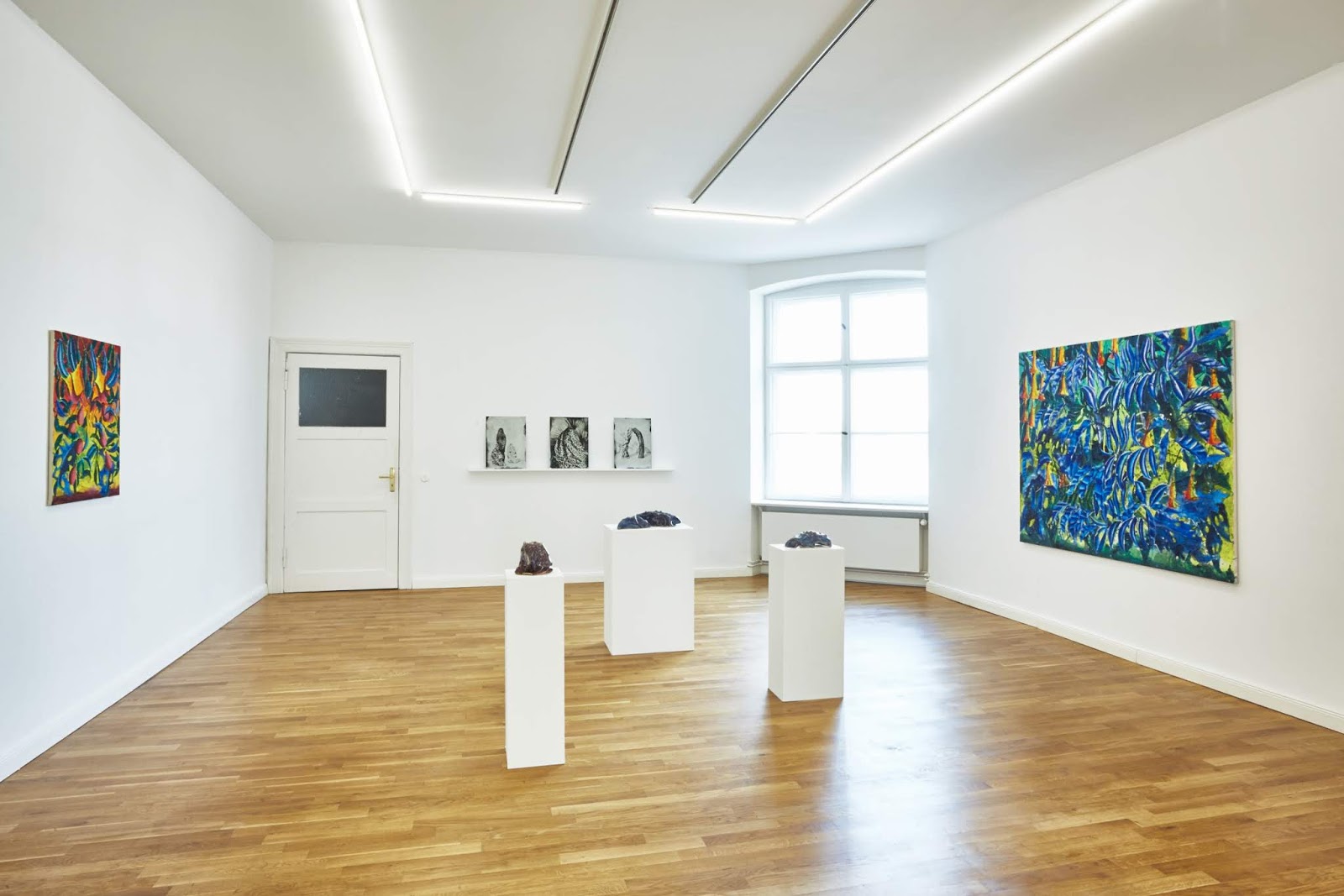 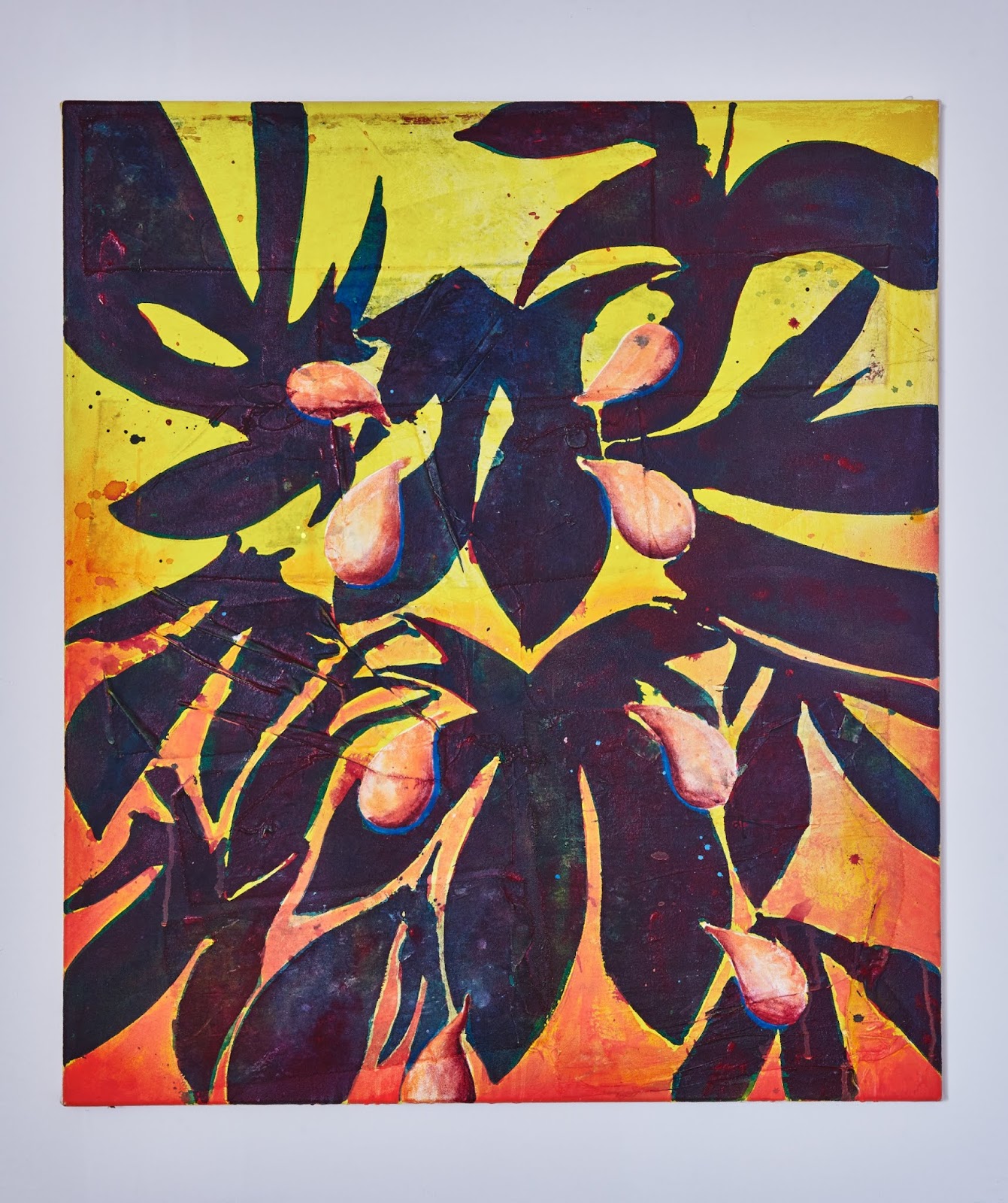 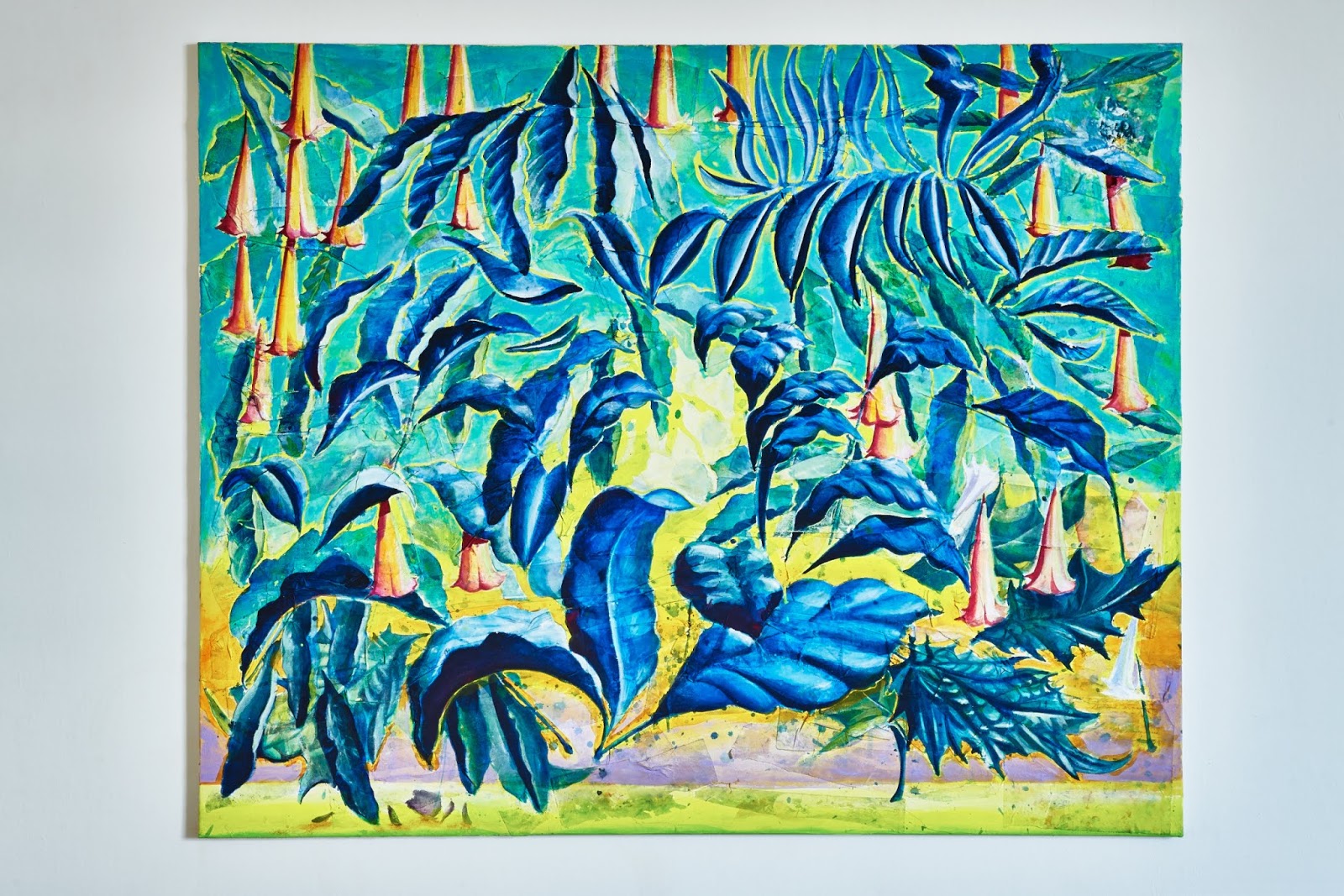 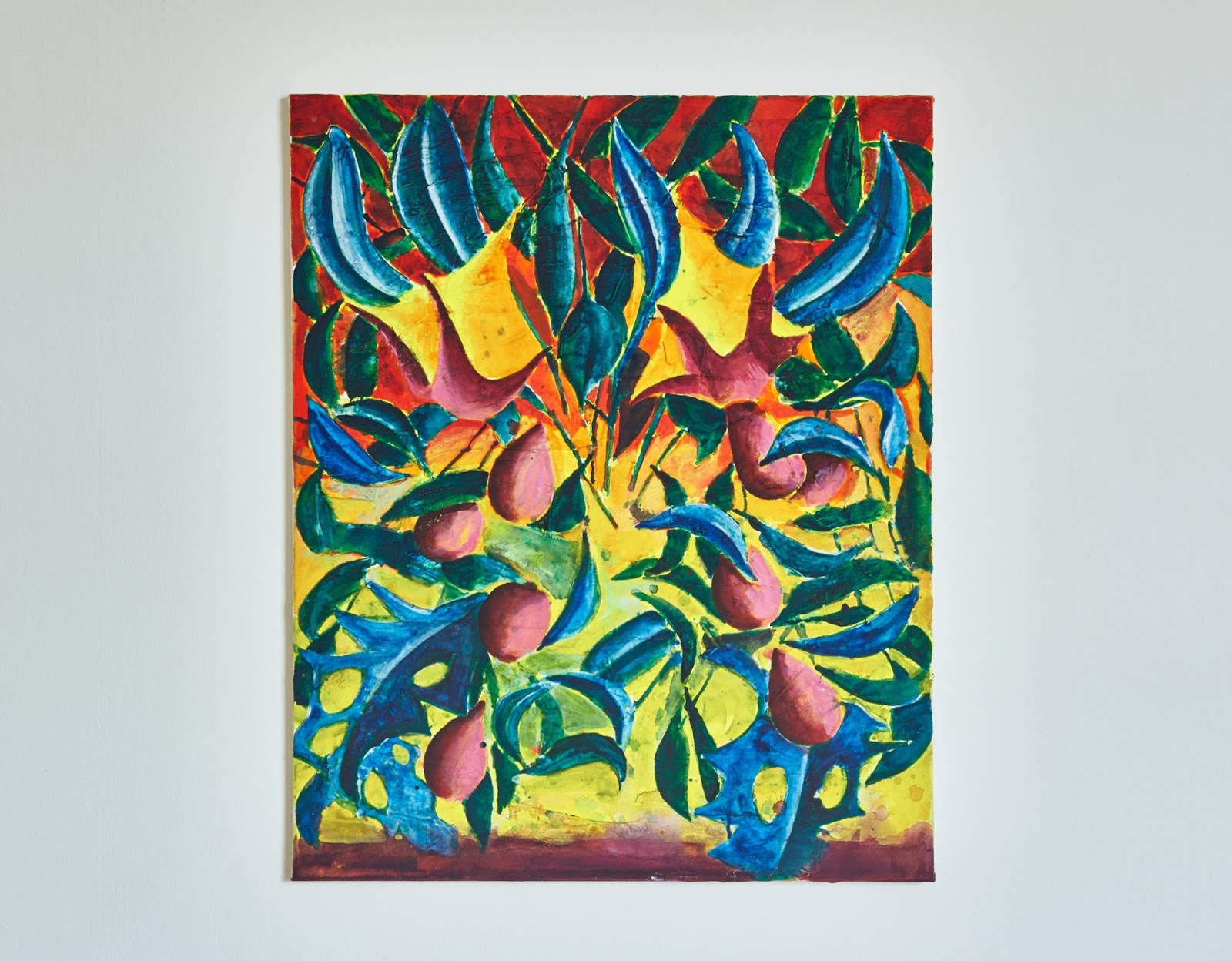 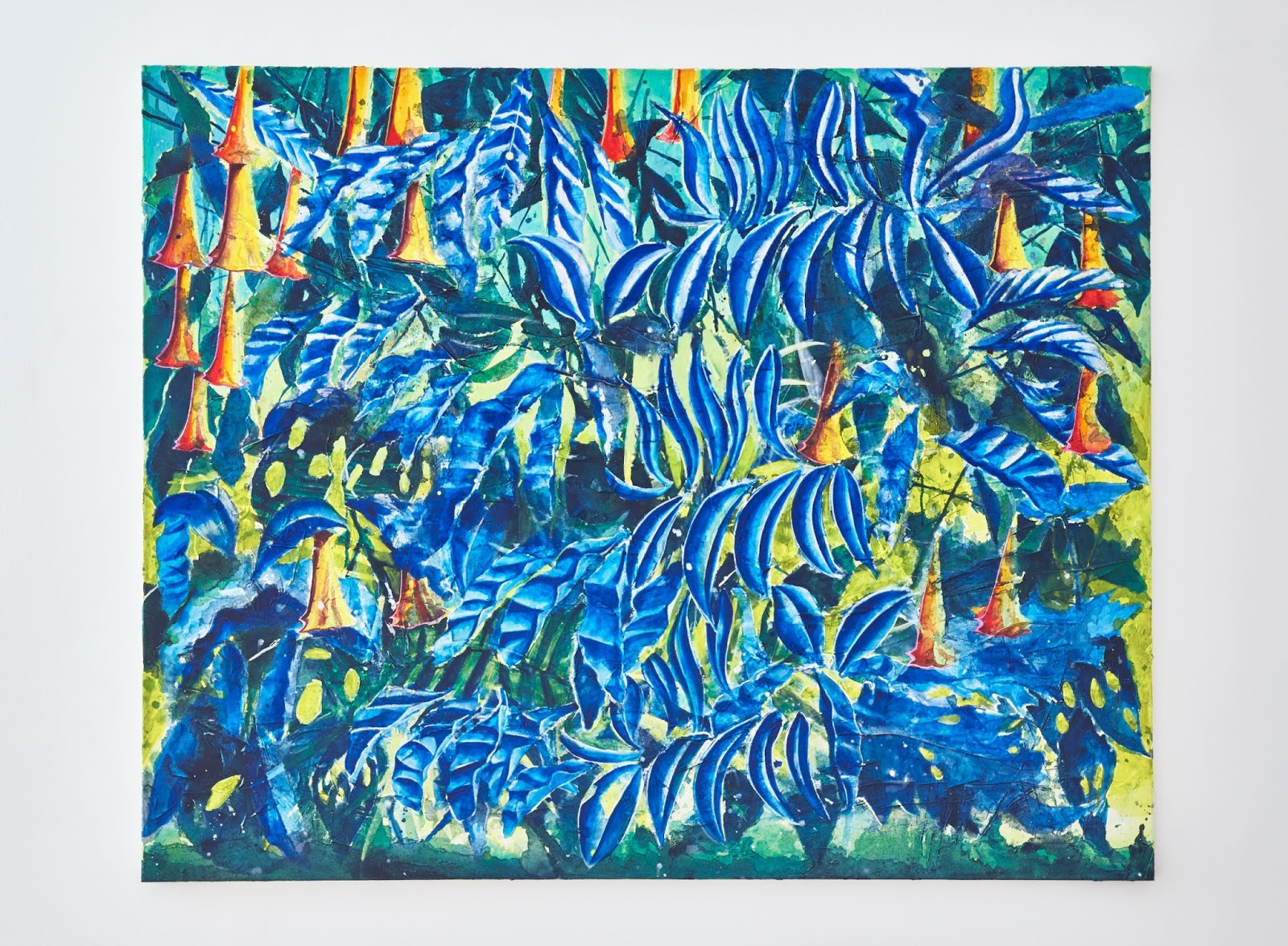 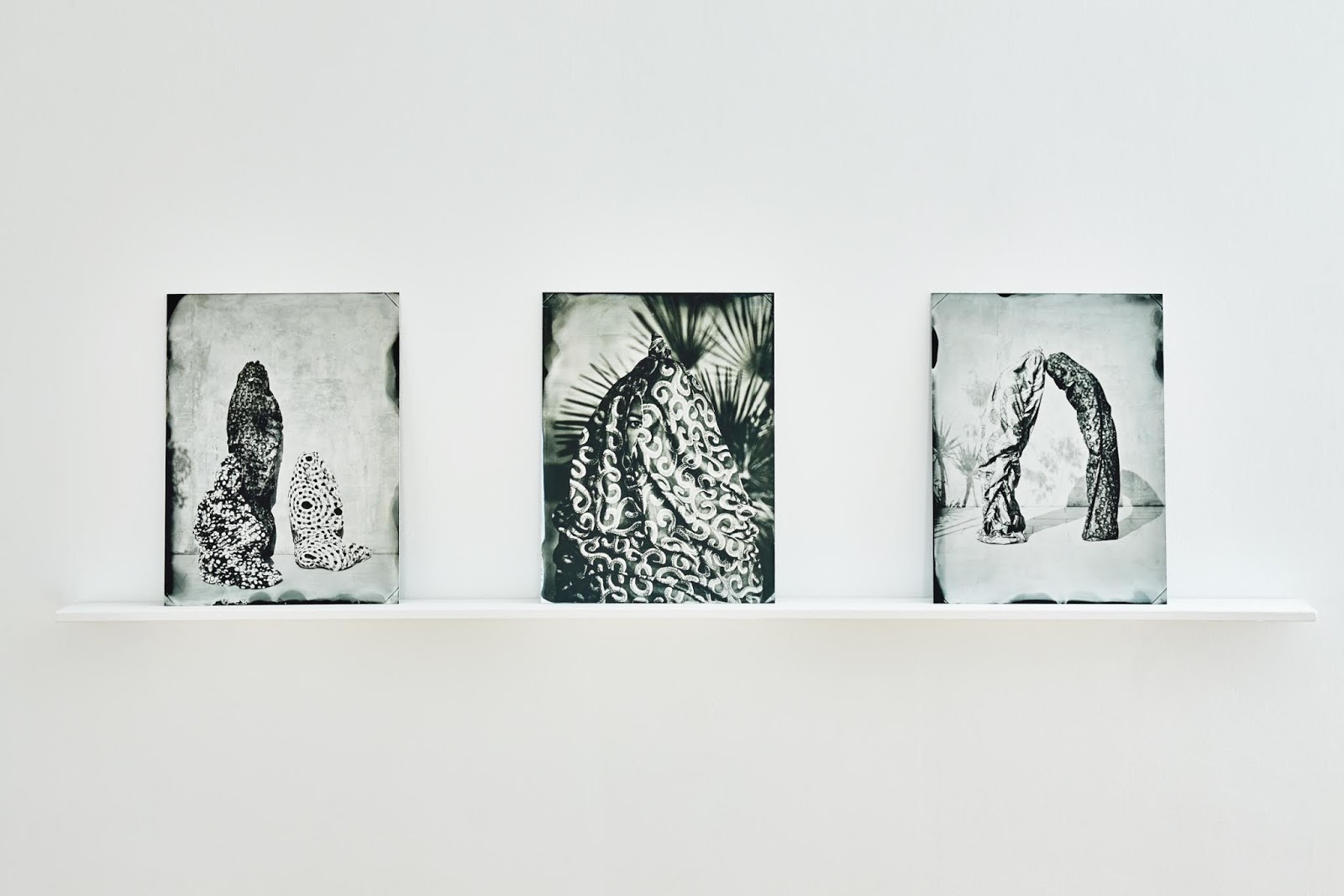 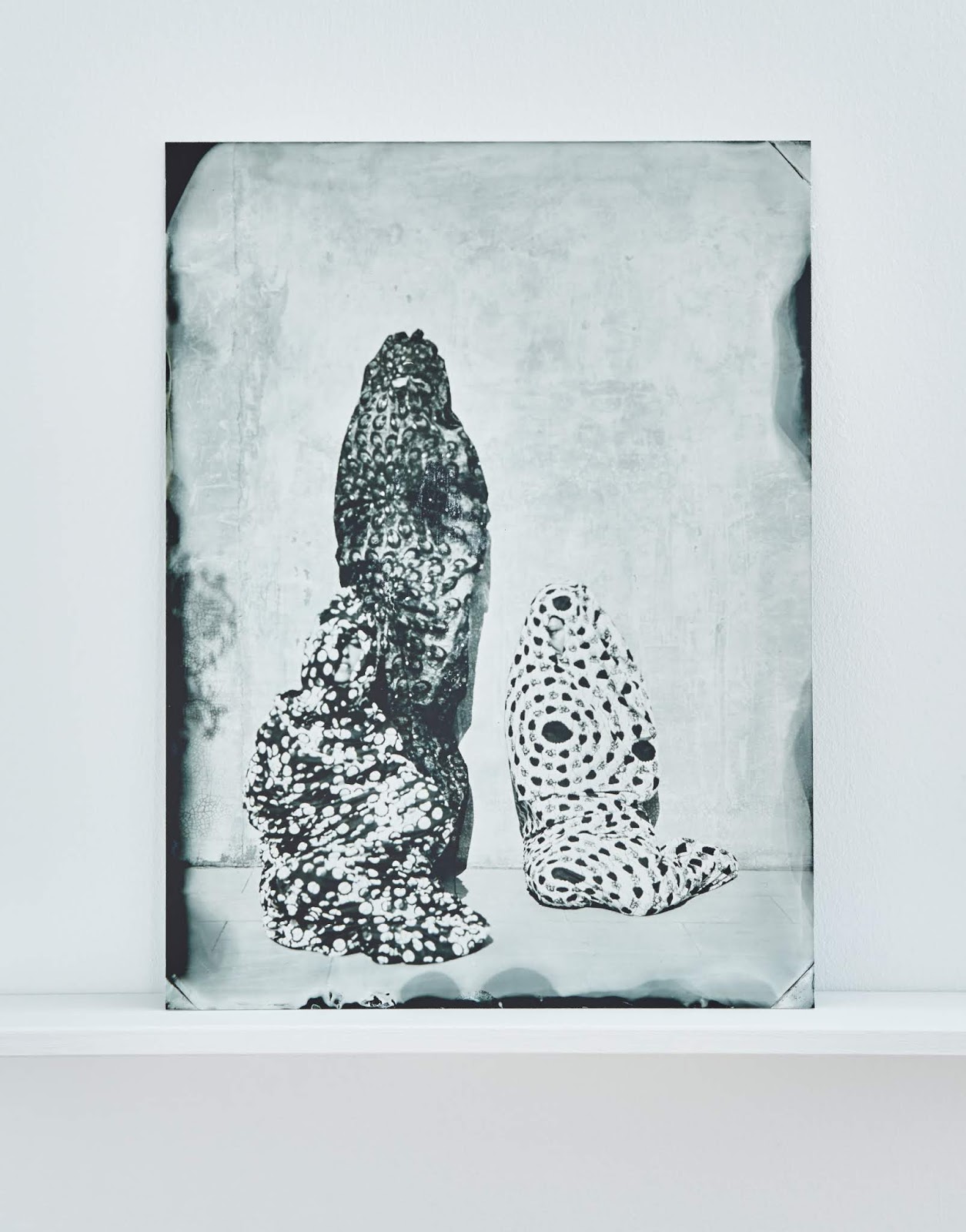 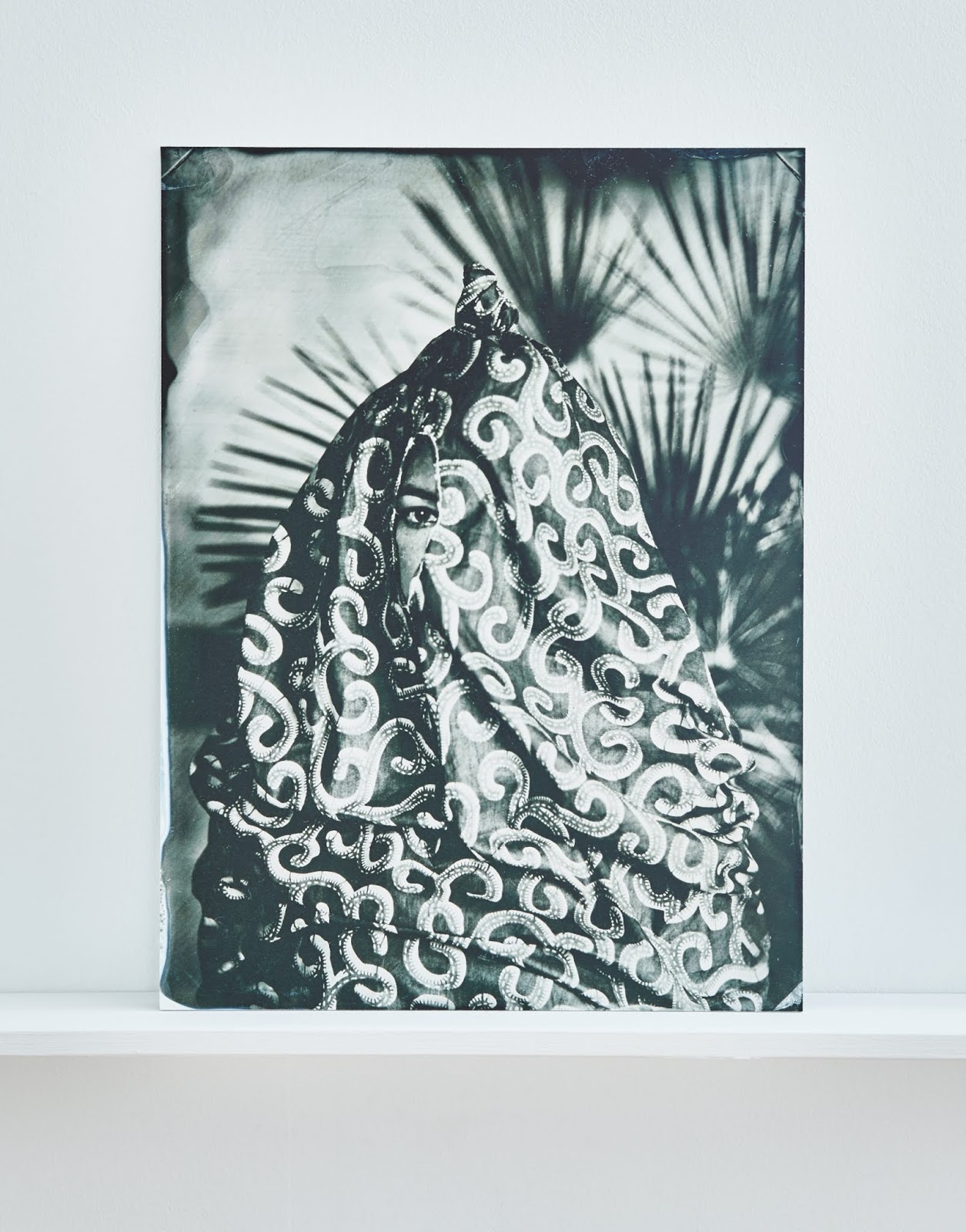 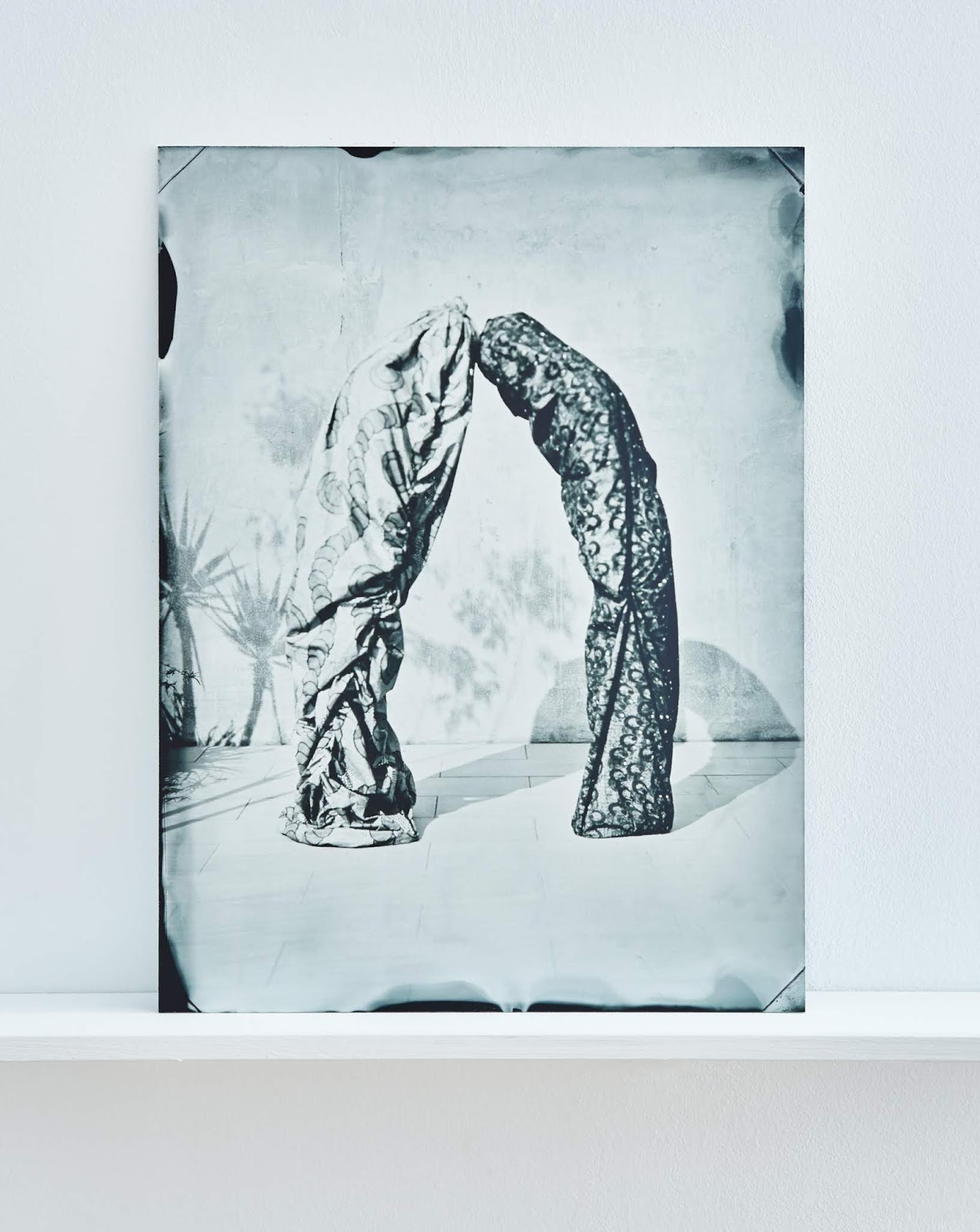 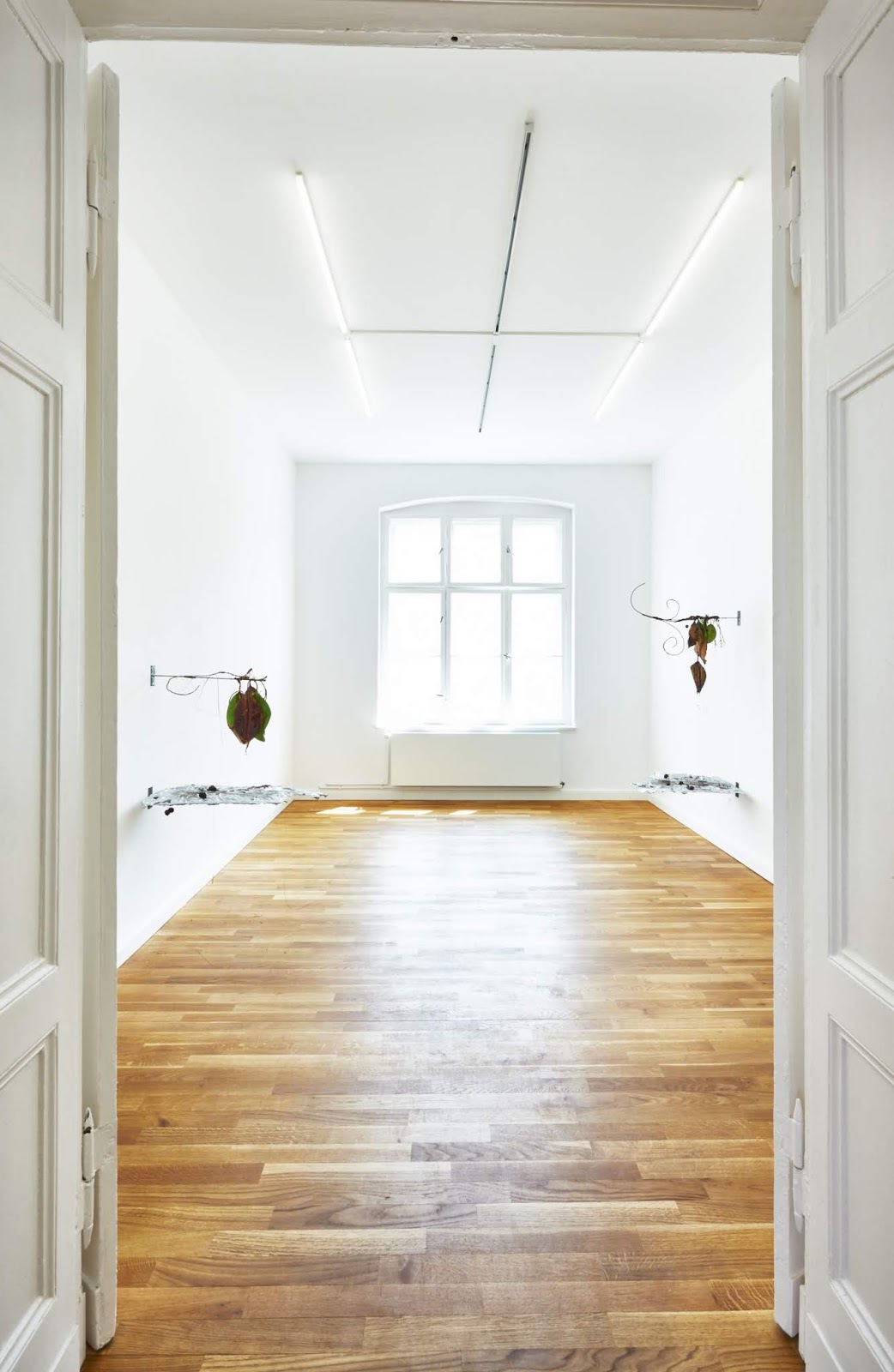 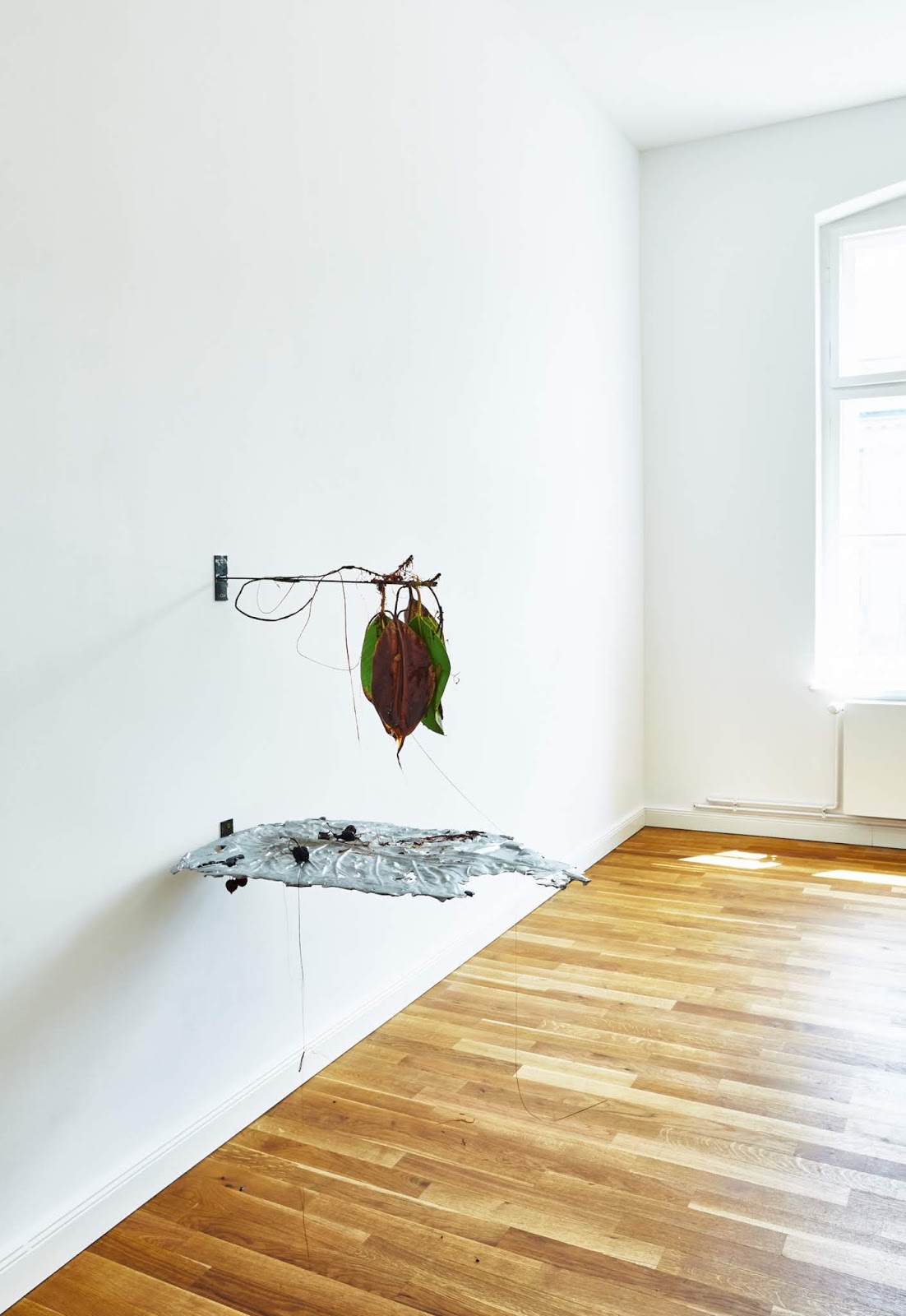 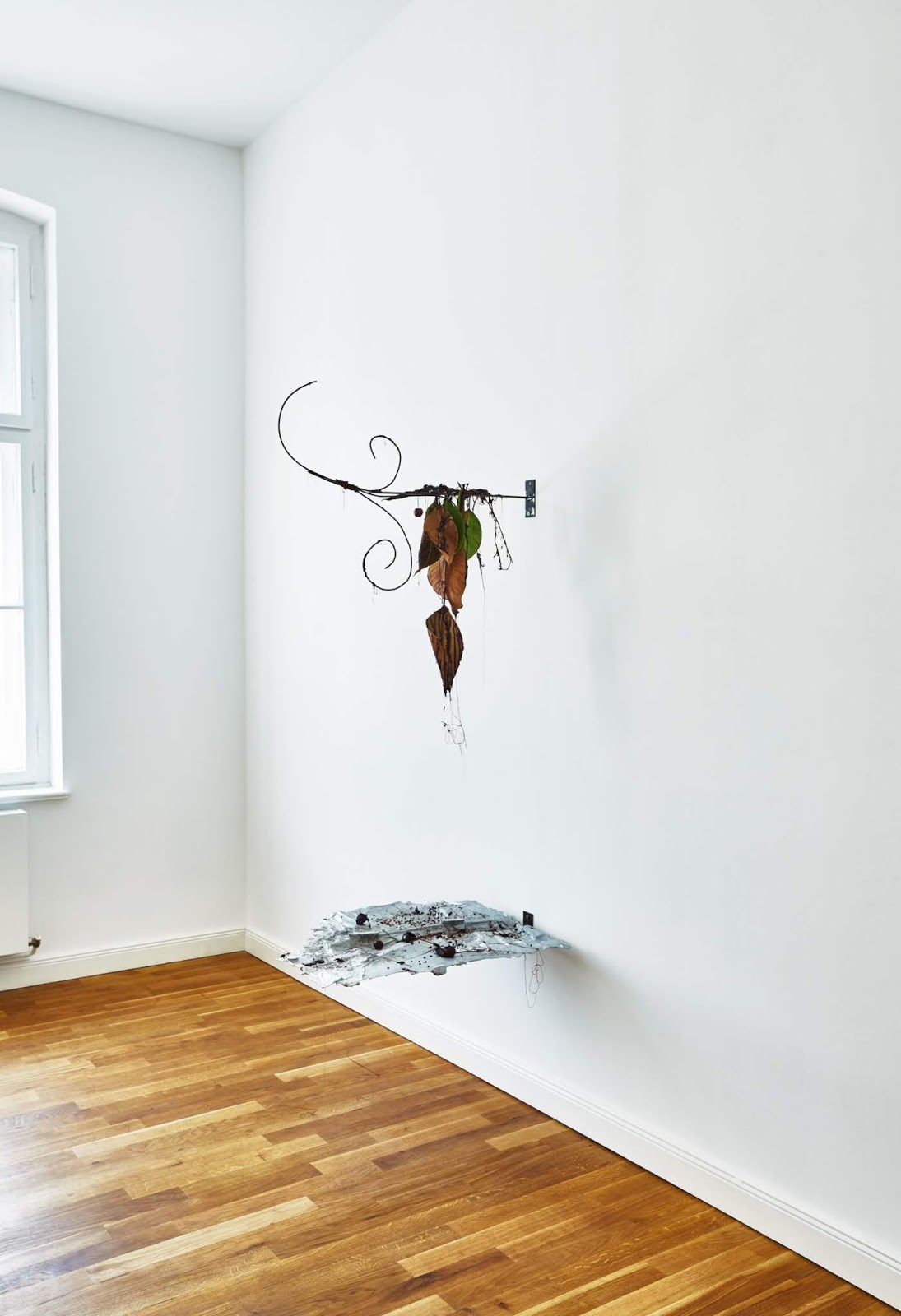 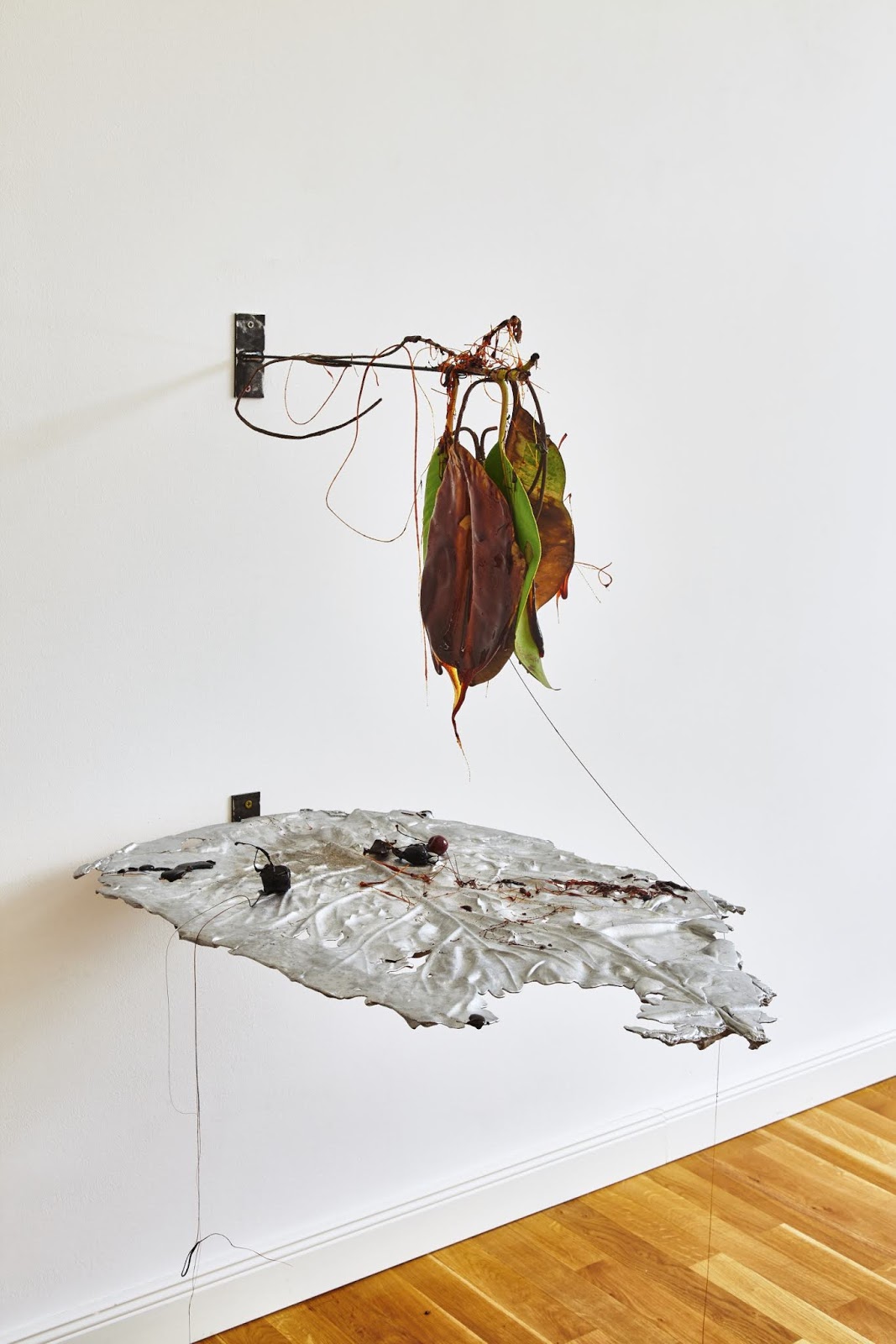 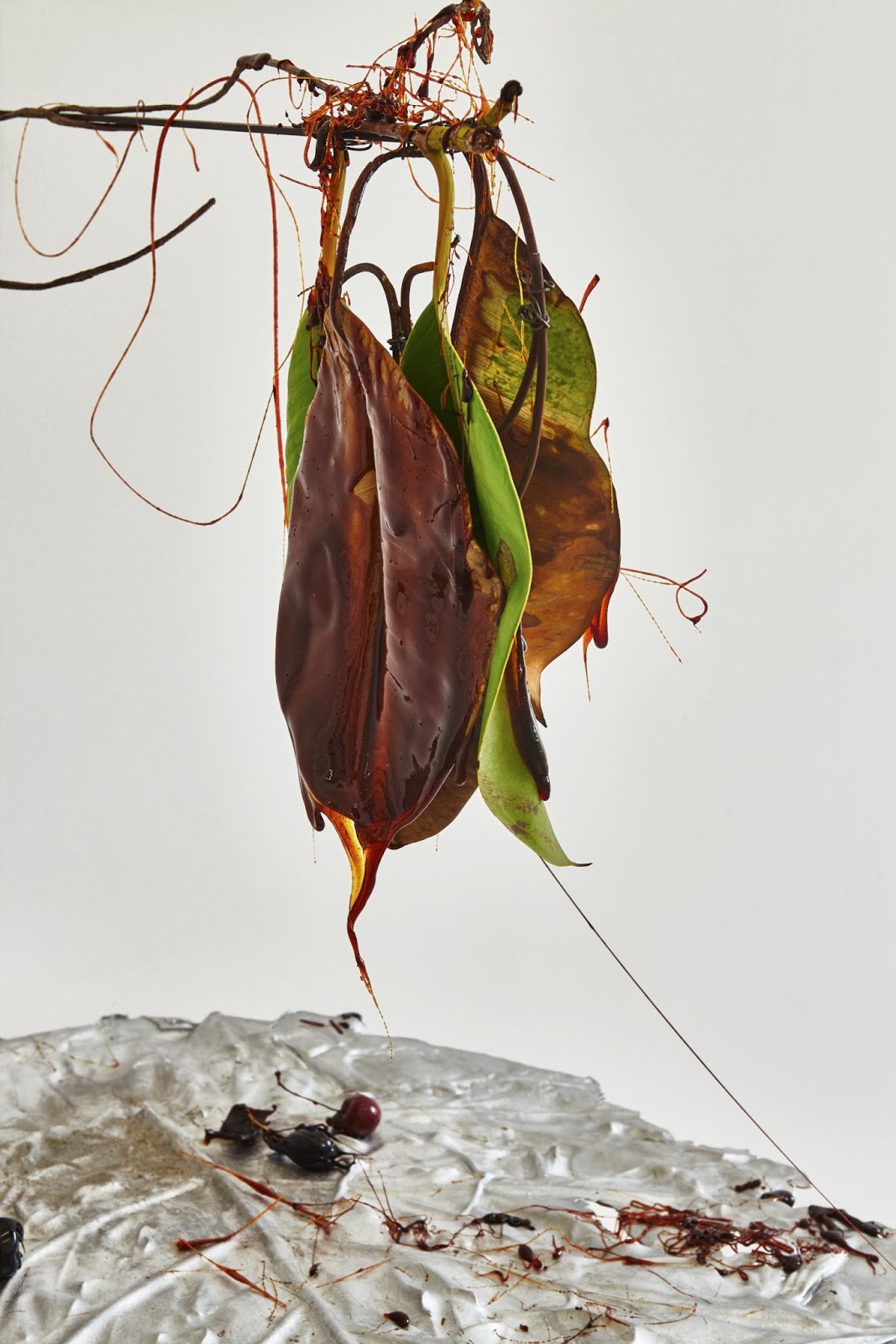 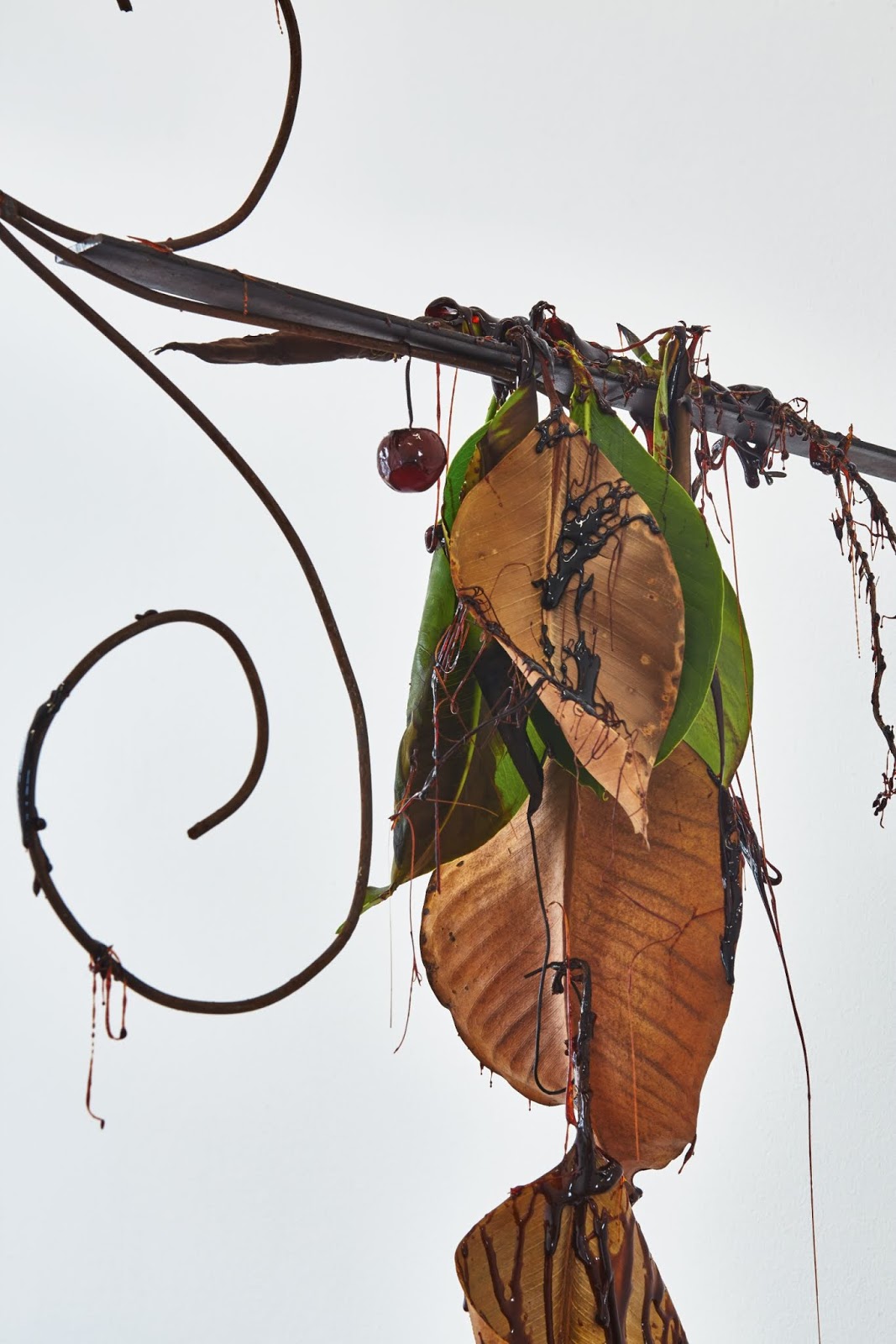 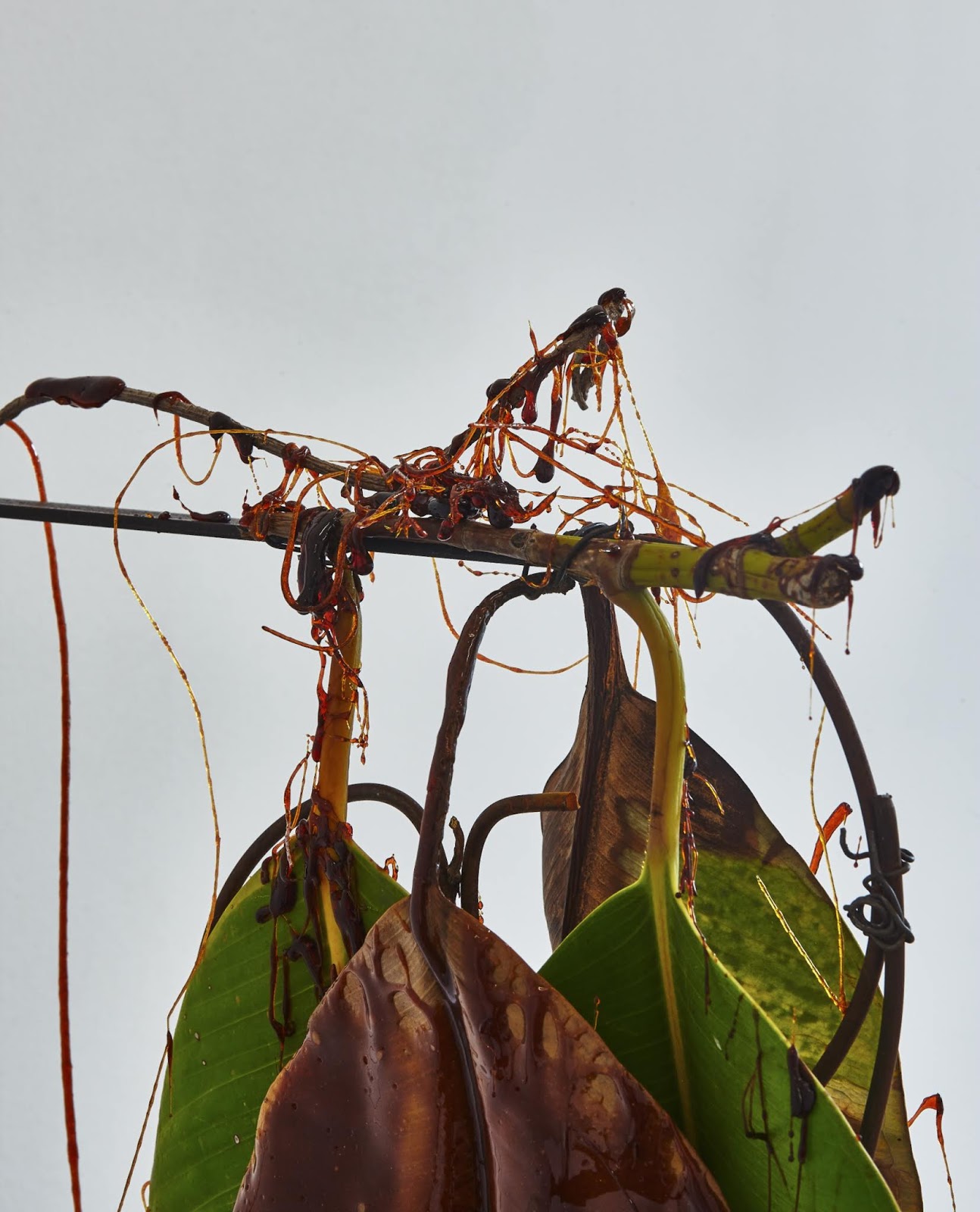 A single drop slowly falling down a hand from an open orange as the peel falls away. Trickles down, honeysuckle dew.The flowers wave in the darkness infecting the air with a sweet aroma. A strong sense ventilating the open laughing mouth. Nectar Eucalyptus. It dries quickly in the piercing sun. The drop of juice leaves a streak down the arm, the dust adheres in a muddy trace.

The skin accumulates residue of hot lake waters, human sweat mingles in that humid air. Water splashing, mosquitos oat like approaching storm clouds. Surrounded by dripping fructose - an acid rain that covers every surface in sheer vibrant glaze. Somewhere up the mountain, a volcano's plume slowly emitting sulphuric gas. The unmoving waters grow algae and bioluminescent microbes spitting on the rocks, jumping in the rain. The sun goes down on the red lake leaving echoes of colour sitting on moist eyes.

Snakes slither through the soft earth and the mud gives way. Clothing moist and covered in clay. Running around that thick red puddle, setting sun, silt. Getting dizzy, falling down on its squishy banks. Wet earth seeps in through strands of hair, trembling fingers, sliding hands. Floppy little houses.

Salt and Iron. Woods that grow.

Julie Favreau (b. 1981, Québec City, Canada) is an artist working mainly with photography, lm, and installation. Her work often incorporates notions of choreography and performative gesture with sculptural objects in bodily milieus. The photographs create the notion of a heightened sensorial awareness and the metaphysical slide between human bodies and a community of inanimate objects. For Sticky, three new photographs will be presented in Berlin for the first time that illustrate materiality of human skin in brief, intimately framed encounters. Recently she has exhibited at Künstlerhaus Bethanien, Berlin; Montreal Museum of Fine Arts, Montreal; Tropez, Berlin; Casino Luxembourg; Blue Star Contemporary, Texas; Darling Foundary, Montreal; and LA BF15, Lyon.

Nicholas William Johnson (b.1982, Honolulu, Hawaii) is a painter who studies the recent science of plant consciousness and its connection with shamanic knowledge and mythology. The curvatures of drooping fruits heavy with nectars give the jungle a lush eshy materiality to vegetal glaze. His recent canvases are composed of unusual palettes that indicate towards altered states of consciousness or brief moments of solstice hues, but retain a mossy textural lichen materiality of a fungal organism on the forest floor. Recently he has exhibited at Plus-One, Antwerp; Walker Art Gallery, Liverpool; Peter von Kant, London; Montoro 12, Rome; and Podium, Oslo.

Martin Llavaneras (b. 1983, El Segrià, Spain) works with sculpture and installation to relate to the divisions between human beings and their environment. Fruit Belt is an ongoing sculptural series that approaches the biological and metabolic process of creating fructose. The caramelized sugar that he drips over leaves and fruits will continue to drip during the summer months of the exhibition onto aluminium plates made from the casts of trampled leaves on industrial fruit farms. Previously, he has worked with micro-environments that are created for the ideal conditions for the ripening of fruit. Recently he has exhibited at Sala de Arte Joven, Madrid; Bombon Projects, Barcelona; La Panera, Lleida; and the Fundació Joan Miró, Barcelona; Musée d’Art Contemporain, Bordeaux; and Centre del Carme Cultura Contemporànea, Valencia.

Lucía Pizzani (b. 1975, Caracas, Venezuela) works with photography, sculpture, and video on the intersection between feminism and botany. Her ceramic works often illustrate the idea that the periphery and delineation of the human body is within nature through the processes of creating the work. Ceramic sculptures from the series Capullo, made of thin clay, are often pressed against textile or skin to create textures that deviate the drips of glazes. They appear like small cocoons which are complemented by the photographic series Impronta in which characters wear fabrics and impersonate a morphing butter y. Recently she has exhibited and collaborated with Fundación Marso, Mexico City; The Photographer’s Gallery, London; and Cecilia Brunson Projects, London.

Juana Subercaseaux (b. 1986, Santiago, Chile) is a painter who creates landscapes that incorporate the indeterminate and constructed dimension of nature. Rather than presenting a romantic and idealised view of nature she focuses on the human relationship with the environment based more on fear, survival, and the threat of death that comes from the unknown. Her night scenes and moments of sparks of light capture something of a hidden and occult knowledge that transfixes the imagination with curiosity as well as reserve. Recently she has exhibited at Espacio Andrea Brunson, Santiago; Edificio Alonso, Santiago;
13 Jardines, Requínoa; Casa Gris, Santiago; The Intuitave Machine, Santiago; and Estudios del Formato, Valdivia.

Àngels Miralda (b. 1990, Princeton, New Jersey) is a Catalan-American curator working with themes of neo-materialism and mineral consciousness as well as imagining the artist’s studio as a microcosm for global industry. In 2017 she curated an exhibition in an artist’s studio on Juliusstraße in Berlin titled “Squishy: Eels Swim in Snakey.” Following the format of title and works, this exhibition is about curating as a feeling that sometimes cannot be described. Occult mysticism and contemporary concerns foreground the exhibition which is about the changing human relationship to nature during summer months as well as increasing global melting. Recently she has curated exhibitions at the Latvian Centre for Contemporary Art, Riga; Lítost, Prague; Bombon Projects, Barcelona; Horse and Pony Fine Arts, Berlin; Podium, Oslo; and the Museum of Contemporary Art, Santiago de Chile.