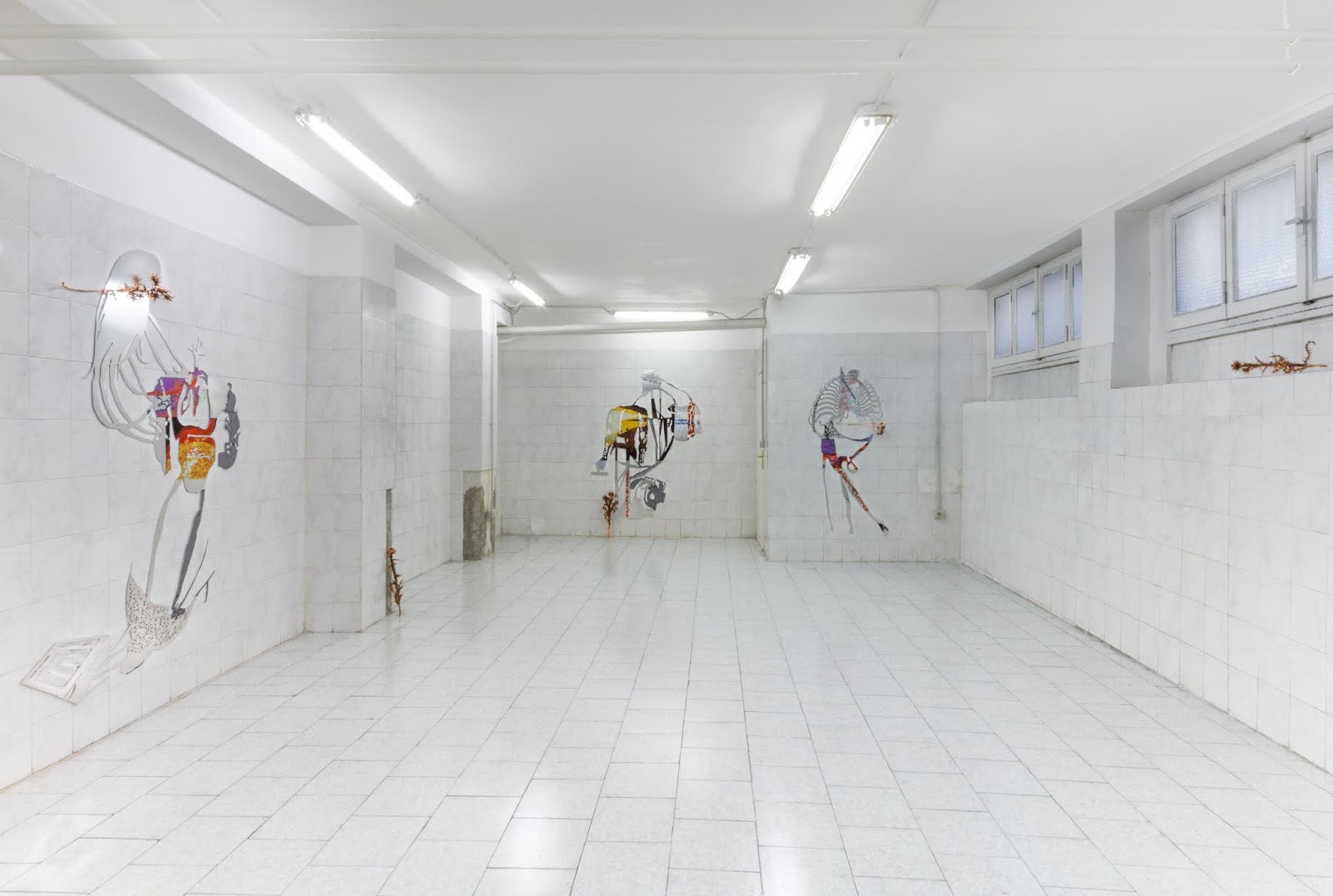 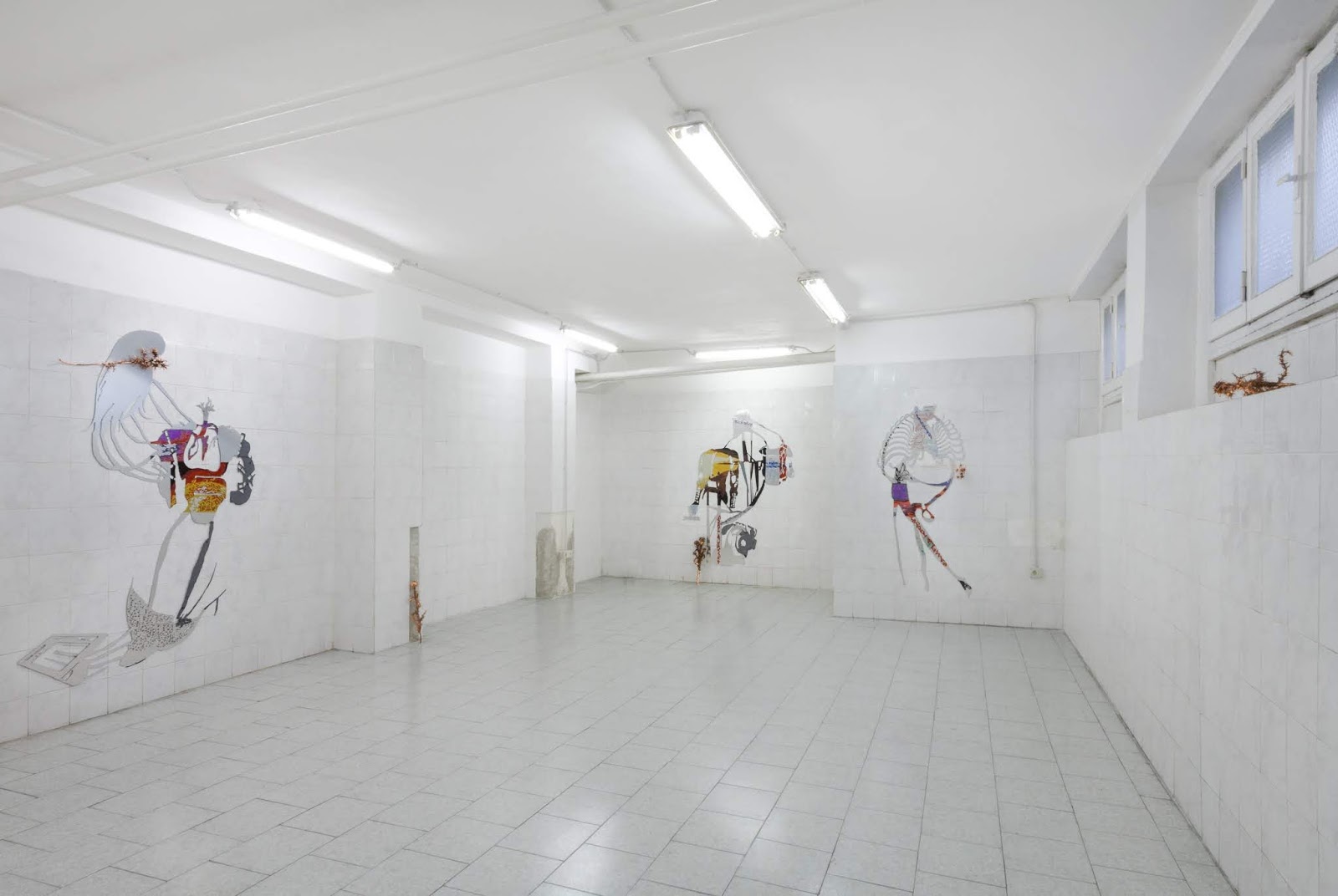 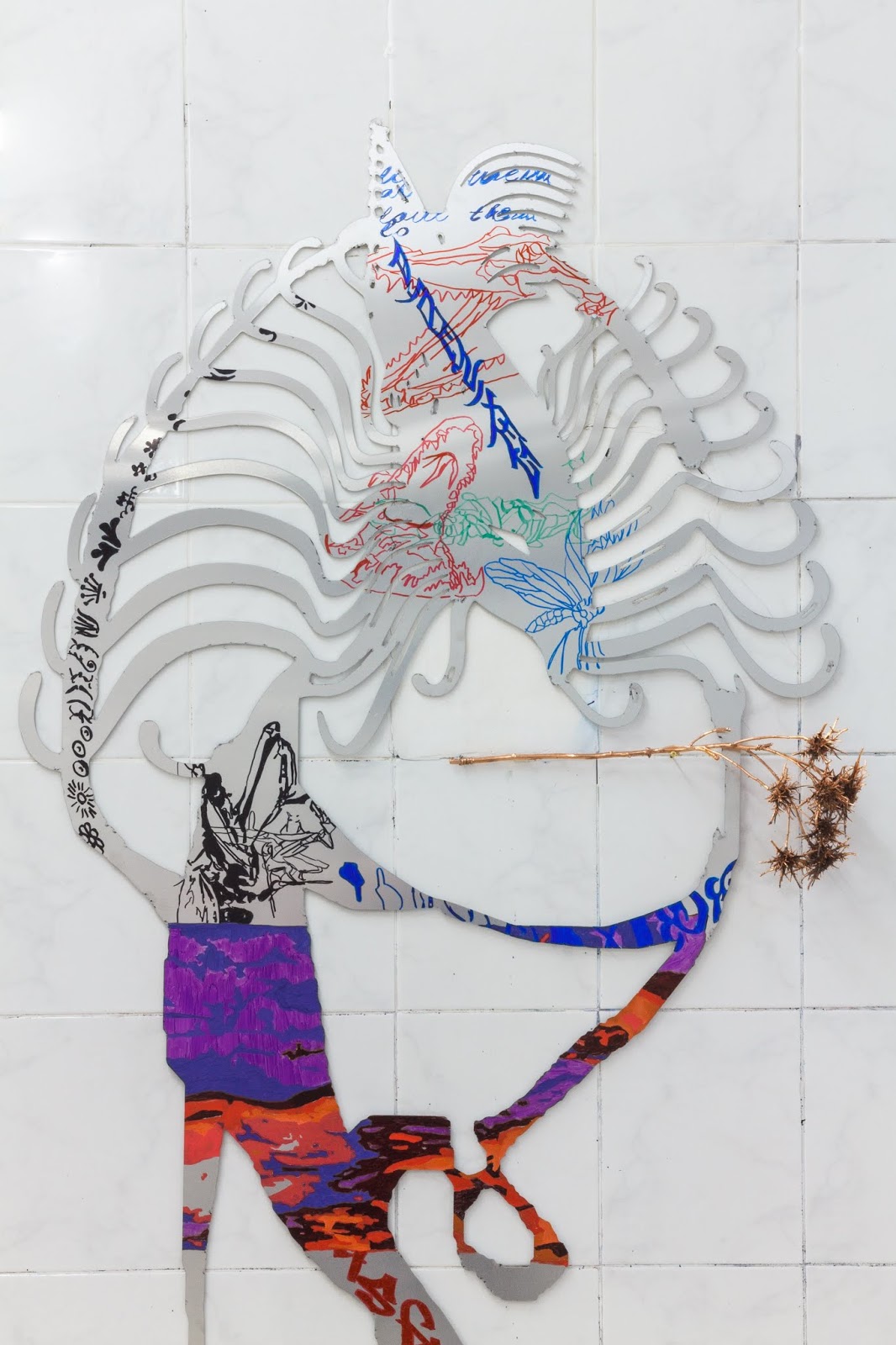 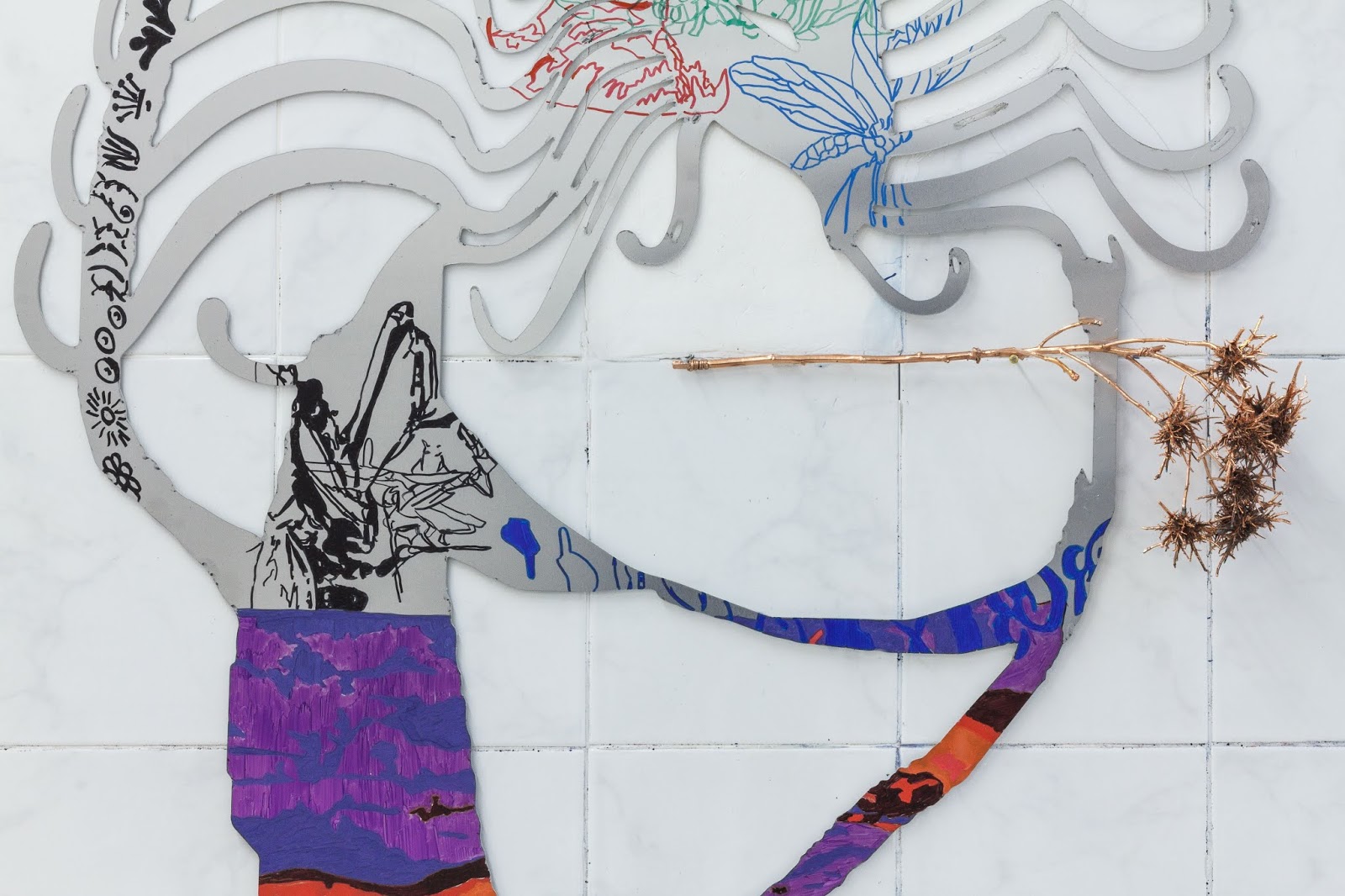 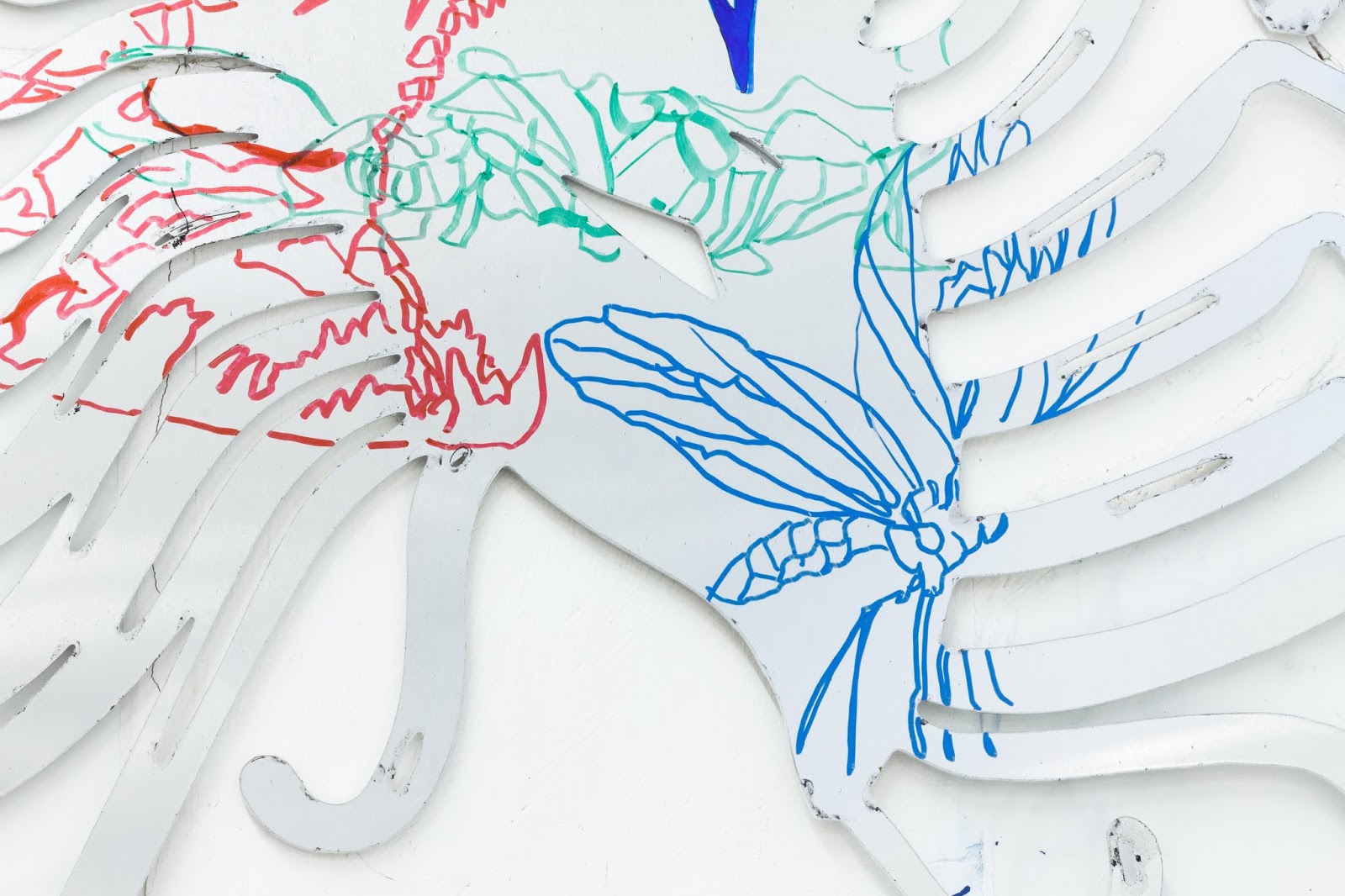 The exhibition, curated by London-based curator Mattia Giussani, will present a new body of mixed media works by the artist. Kattou will come up with a new approach of exploring the ideas and synergies surrounding the roles of human and non-human agents, as well as which implications these relationships have on the ecological transformation, adaptability and concerns.

Unknown Synergy
“Nature is declining globally at rates unprecedented in human history — and the
rate of species extinctions is accelerating, with grave impacts on people around
the world now likely”. 1 This is the alarming opening statement of a recent report
released at the end of April 2019, from the Intergovernmental Science-Policy
Platform on Biodiversity and Ecosystem Services (IPBES), an independent organism
created by United Nations in 2012.

In this new ecological world without nature2, where conditions of species survival
on planet Earth are deteriorating year by year, how is it possible to tackle and
analyse the relationships between human and non-humans agents? Within the
contemporary techno-capitalistic structure, in what terms should we discuss
humans relationships with non-humans agents living in the same uncertain world?

As the German Scholar Erich Hörl3 states, Ecology has started to designate the
collaboration of a multiplicity of human and nonhuman agents: “it is something like
the cipher of a new thinking of togetherness and of a great cooperation of entities
and forces, which has begun to be significant for contemporary thought.” (Hörl,
2017)

For her first solo exhibition in Italy, Unknown Synergy, Lito Kattou produced a new
series of human-like sculptures of bodies shaped as a composition, an assembly
of human, technological and natural parts that come together to form something
that reminds a new form of environmental creatures. Looking at the artist’s series
of work Body, the complexity of the shapes used in each of the three sculptures
is striking. In these visibly digitally fabricated aluminium artworks, the different
composing elements are fluid and harmonic, interconnected to one another. A
flower-headed upper part of a human body and legs with a stingray attached to
them, commanded by a screen; a resembling like fish; a deconstructed human
figure powered by a turbine motor. All of the sculptures have hand-painted drawings
or acrylic paintings of sunsets and landscapes that are carried as equipment,
attributes, adornments and abstract skills by the bodies.

The influence and role of technology in these hybrid beings is visible in their
functioning, and as expressed by theorist Luciana Parisi, “Ecology involves the
capacities of the environment, defined in terms of a multiplicity of interlayered
milieus or localities, to become generative of emergent forms and patterns”4 (Parisi,
2017). These newly formed patterns are a typical example of what the Cypriot artist
is trying to expose with her sculptures. Ecology, intended as a synergy of different
organisms and agencies, generating new types of figures and configurations,
something that can be linked to and seen as a realization of what critical
posthumanist Rosi Braidotti would see as a post-anthropocentric model that places
the preservation of the “dynamic, self-organizing structure of life itself”5 (Braidotti,
2013).

It is possible to say then that synergy has become the “principle of principles of
ecology”6 (Neyrat, 2017) that characterizes our contemporary condition. As a
consolidated fact that nature doesn’t exist anymore as previously intended in
this ecological condition, “everything makes itself over and over again, endlessly
constituting and reconstituting itself, ceaselessly becoming” (Neyrat, 2017)7. This
can be recalled with the fragile Mediterranean dried milk thistles that the artist uses.
In this new version, the copper electroformed thistles can be interpreted in different
meanings. They can be used in an encounter, gifts to be given to other bodies, or
paying tributes to bodies that are gone. Nature that repeats itself over and over
again, carrying with it different values and uses.

Looking at the artist’s work, it is clear how this (once) unknown synergy between
humans and non-humans is fundamental, and how breaking these interconnections
is not a viable option. The fragile equilibrium, and yet a connectiveness that
pervades Kattou’s work, envisions and mirrors the key topics of debate regarding
ecological worlds, showing how the separation between all the agencies that
populate Earth would not be possible and how it would be counter-productive,
exposing the very changes we’re dealing on a day to day basis, and envisioning what
the future is holding for us.

Lito Kattou, born in Nicosia, Cyprus 1990, is a visual artist based in Athens. She is a graduate of the Royal College
of Art in London with an MA in Sculpture and the Athens School of Fine Arts. Kattou is the winner of the Ducato
Prize 2019, recipient of the New Positions Award for Art Cologne 2018 and she was the invited artist for the 89plus
Google Residency curated by Hans Ulrich Obrist and Simon Castets at the Google Cultural Institute in Paris, 2017.
She has presented her work in solo shows at the Artothek, Cologne; Polansky Gallery, Prague; Benaki Museum,
Athens; ROOM E1027, Berlin; Point Centre for Contemporary Art, Nicosia; Eleni Koroneou Gallery, Athens;
Clearview.ltd, London; Pierre Poumet, Bordeaux; Radical Reading, Athens and in various group shows at art
spaces, galleries and museums including Nottingham Contemporary, Nottingham; Kraupa-Tuskany Zeidler, Berlin;
Changing Room, London; Foothold, Bari; Komplot, Brussels; Midway Contemporary, Minneapolis; Benaki Museum
and Deste Foundation, Athens. Her works are included in prominent international and private collections as the
Dakis Joannou Collection, the collection of the National Bank of Greece, the collection of Deutsche Telekom.

Mattia Giussani is an artist, curator and editor based in London. After graduating in BA Photography at
Camberwell College of Arts in 2015, he graduated in MFA Curating at Goldsmiths, University of London in 2017. His
research has strong interest in the relationship between digital technologies, social changes and the response of
art to these challenges. Recently he’s researching within the Posthuman field, and using it as a navigation tool within
different theories, especially in relation between art, computational culture, technology and new media. Recent
artistic and curatorial projects include Heedful Sight at Like a Little Disaster (Polignano a Mare, Nov 2018, IT);
Future Fictions at Assembly Point (London, Sep 2017, UK); Non Standard at T-Space (Milan, June 2017, IT); We are
having a great time :) at Rockelmann & (Berlin, 2016, DE); 9 Evenings: Theatre and Engineering Revisited 1966/2016
at Arts Catalyst (London, UK, 2016); Into The Fold at Camberwell College of Arts (London, UK, 2016);