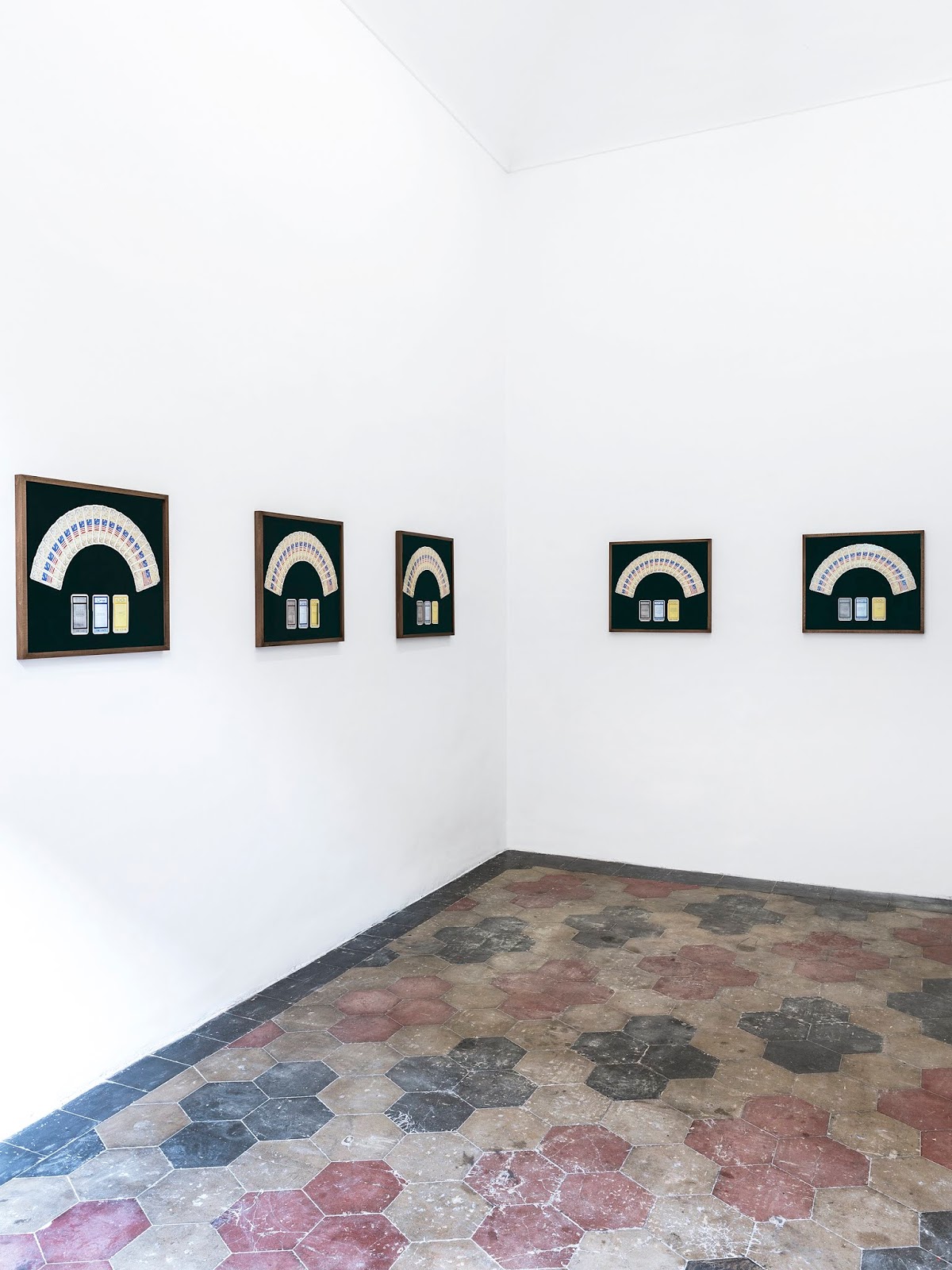 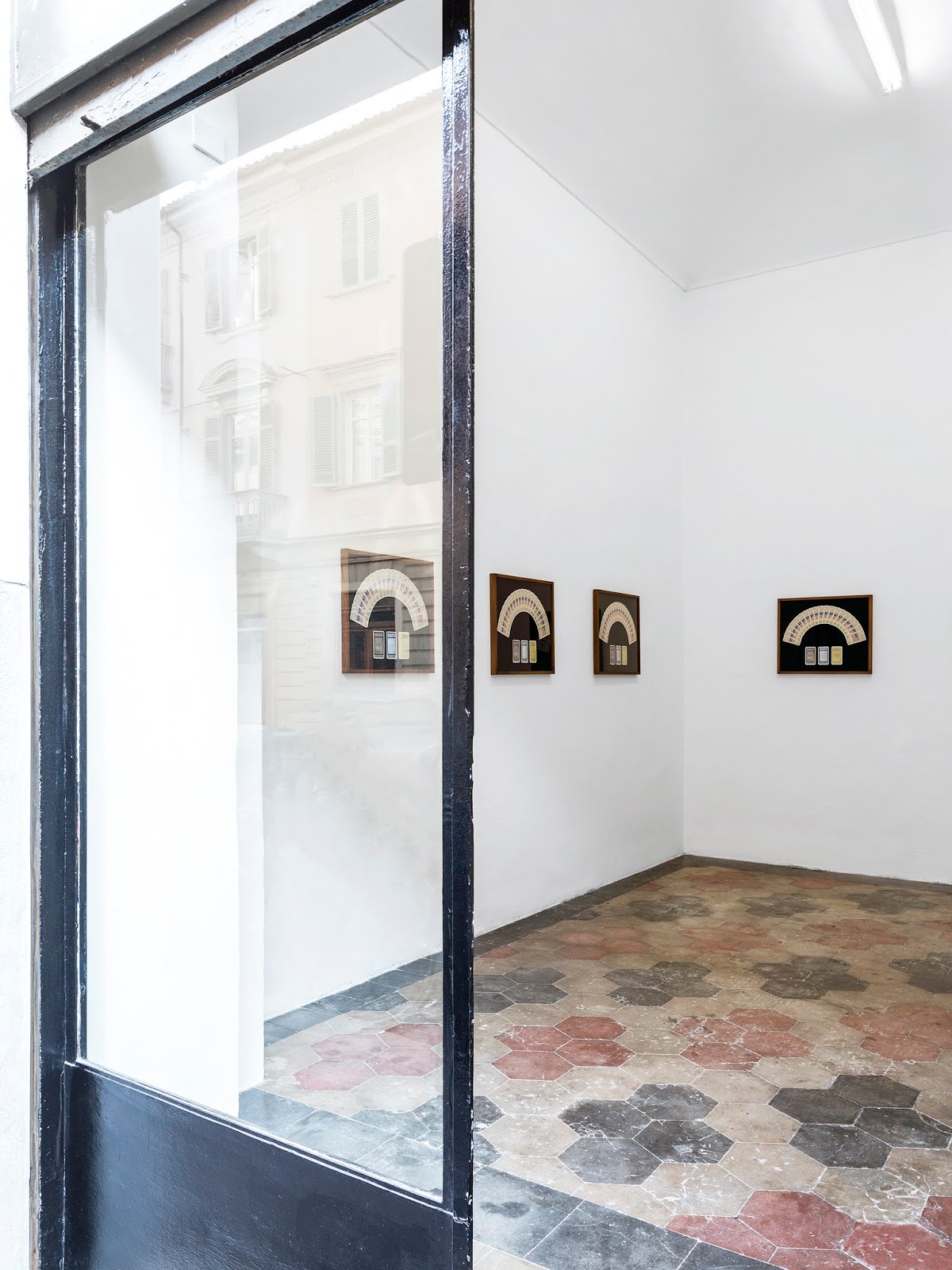 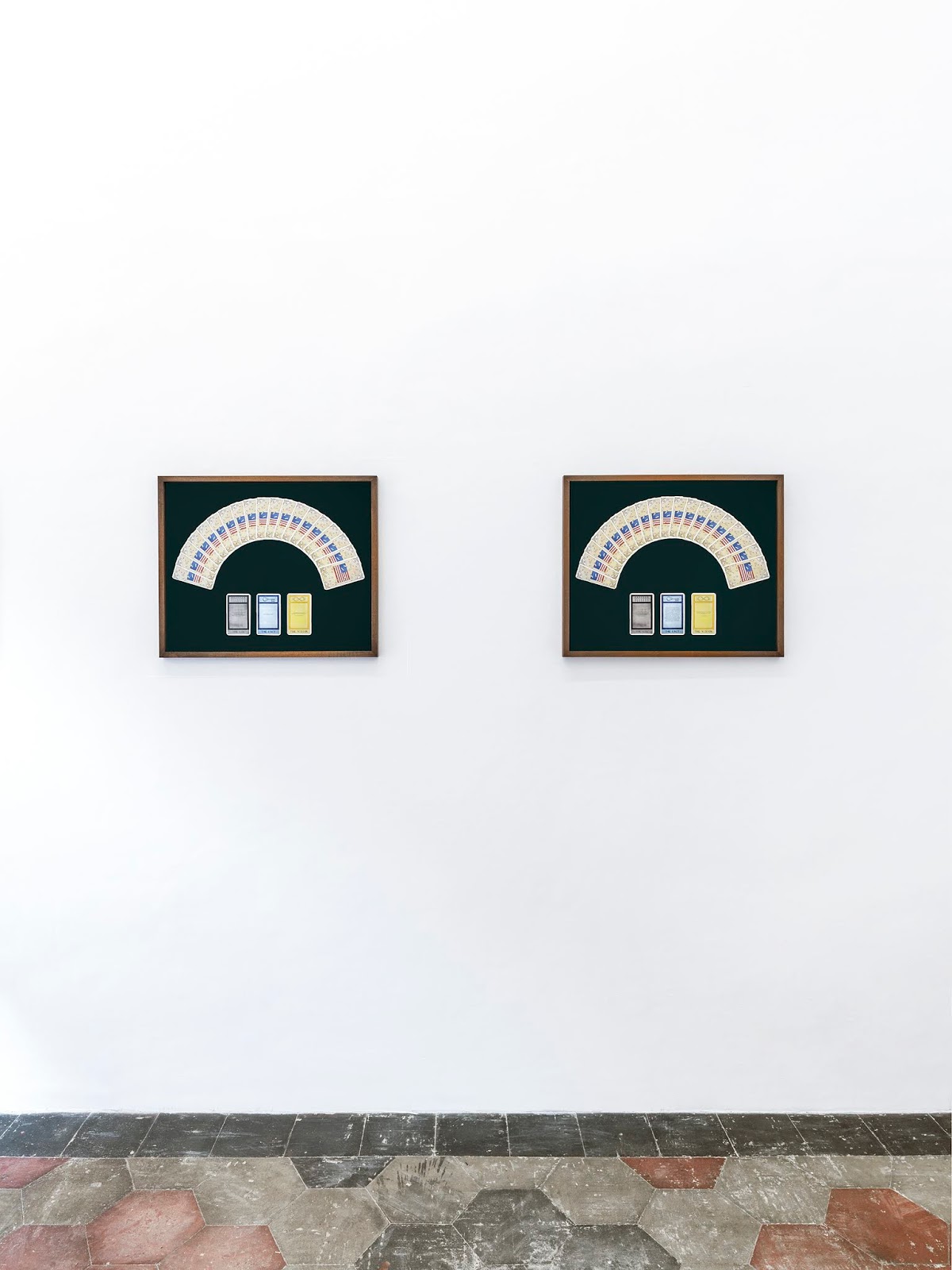 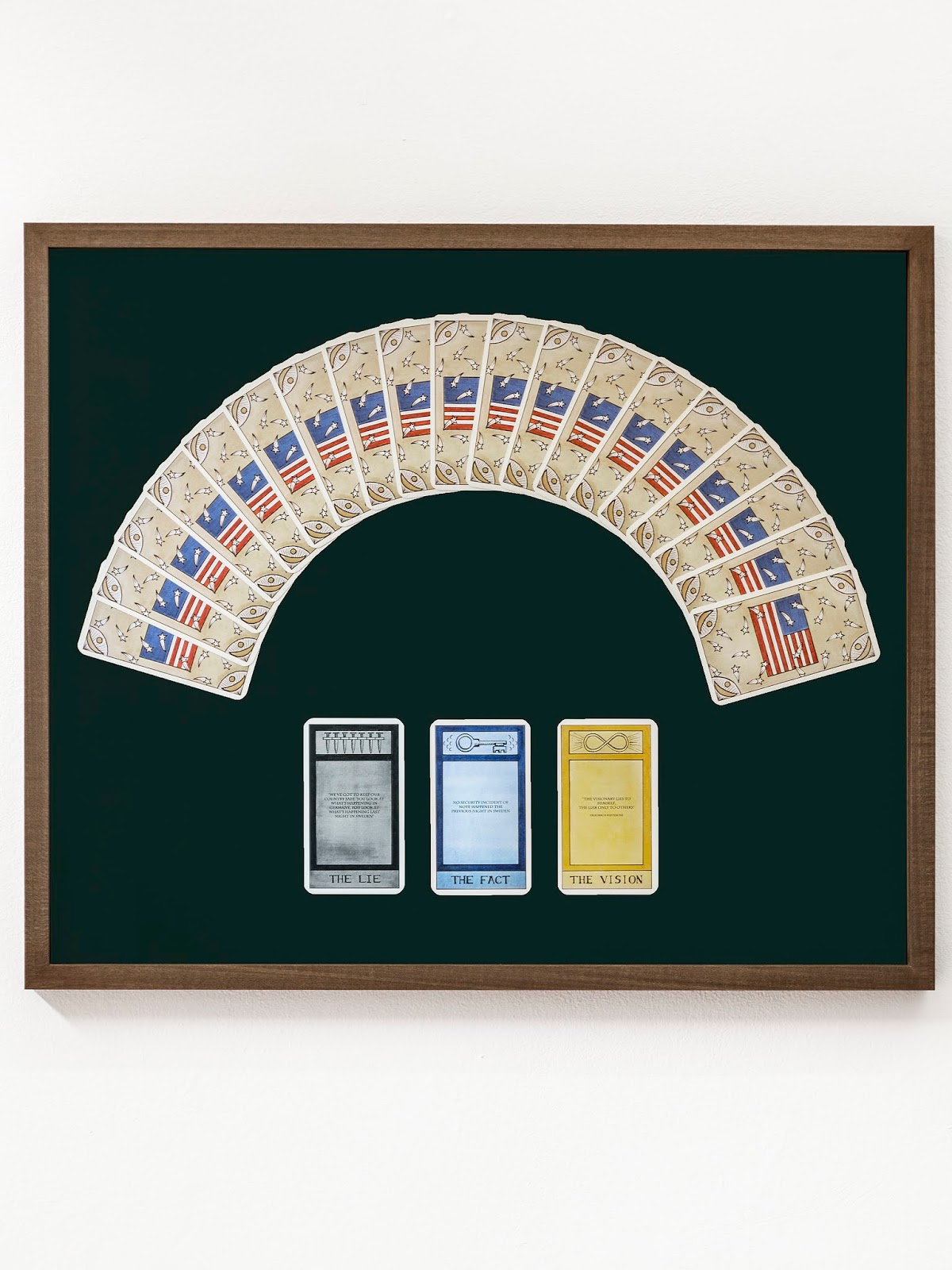 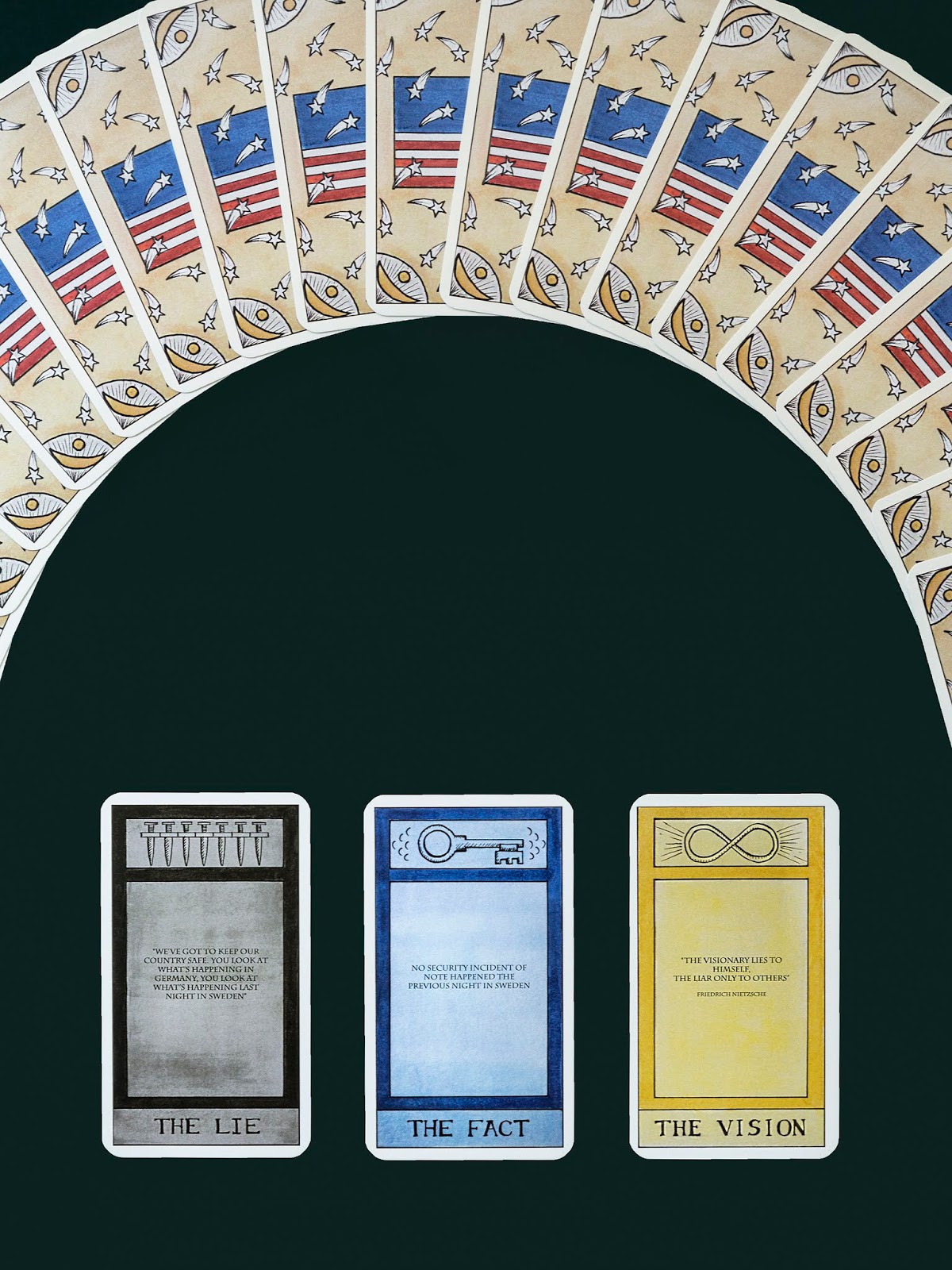 Quartz Studio is pleased to present Everybody Knows, the first solo show in Turin by Yarisal & Kublitz, a Swiss-Danish duo of visual artists composed of Ronnie Yarisal (1981, Geneva, Switzerland) and Katja Kublitz (1978, Copenhagen, Denmark). The artists will present for the first time a new series of works called Trump Cards from 2019. “We live in a post-truth era of great uncertainty and confusion—say the artists. U.S. President Donald Trump’s statements are emblematic of our times with his obvious contempt for objective reality. In every deck of Tarot cards there are 22 cards known as ‘Trump Cards’ (or the Major Arcana) that reference life’s key issues. Reading Tarot cards is a form of divination, which literally means working with the divine, or your higher self. In our Trump cards, we display a Lie, a Fact, and a Vision. The Lie is a trigger for outrage; the Fact serves to inform; and The Vision presents generosity, wisdom, and beauty as an antidote to fatalism—exactly the karmic overhaul we need at this moment. We choose to juxtapose Tarot cards with President Trump’s lies because they symbolize the pursuit of inner wisdom through mysterious magical forces.”
The installation conceived for Quartz Studio consists of 5 wall panels, each with 22 Trump Cards (22 is the number of the Major Arcana cards in Tarot), 3 of which turned over, so legible, plus a wood pedestal in the center of the space. Yarisal & Kublitz’s work is always meticulous in its form, whether sculptures, installations, or a two-dimensional project such as this one in Turin. Humor, paradox, and provocation mingle in all of their works, underpinning their thinking on contemporary society that reaches far beyond attractive surface appearances to touch on universal themes, such as the economy, religion, politics, and communication. The series of works shown in the Everybody Knows exhibition tackles the issue of contemporary political communication that inevitably becomes propaganda be- cause of social media that turns a false statement (lie) into a truth even if the reality (fact) is something else. The only antidote to this perverse mechanism is to take a critical position (vision) starting with a quote fitting the context that the two artists had fun finding for each occasion based on the false truths declared by the American president. Tarot is an ancient game that is especially fascinating for its connection to divination practice. Translating it into a contemporary version with such clear political references renders it both irreverent and fun. Yarisal & Kublitz made use of archaic aesthetic designed specifically for the Trump Cards based on the original Tarot cards for texts that seem to contain the total brevity of a tweet, creating an additional unsettling effect in the viewer. And here is the perfect completion of the circuits of meaning between the words present/past/ possible future, lies/facts/suggestions, and propaganda/political news/demagoguery.

Ronnie Yarisal (1981, Geneva, Switzerland) and Katja Kublitz (1978, Copenhagen, Denmark) are a Swiss-Danish duo known for their humorous and subversive sculptures and installations. They met at Central Saint Martins in London in 2001 and, after graduating, they moved to Berlin where they currently live and work. Their practice is guided by a quasi-anthropological approach. They explore the themes of faith, myth, language, and ritual in the attempt to understand the complex connection between spirituality and the material world. They have participated in group and solo shows in several art centers including: Palais de Tokyo, Paris, France and Maryland Art Place, Baltimore, USA (2018); Swiss Institute, Rome and Saatchi Gallery, London, UK (2017); Kunstpalais Erlangen, Germany (2016); Flux Laboratory, Geneva, Switzerland (2013); Kunsthalle Galapagos, New York, USA (2010); Kunstvere-in Wiesbaden, Germany (2008); Exit Art, New York, USA (2007); and Charlottenborg Museum of Art,Copenhagen, Denmark (2005).