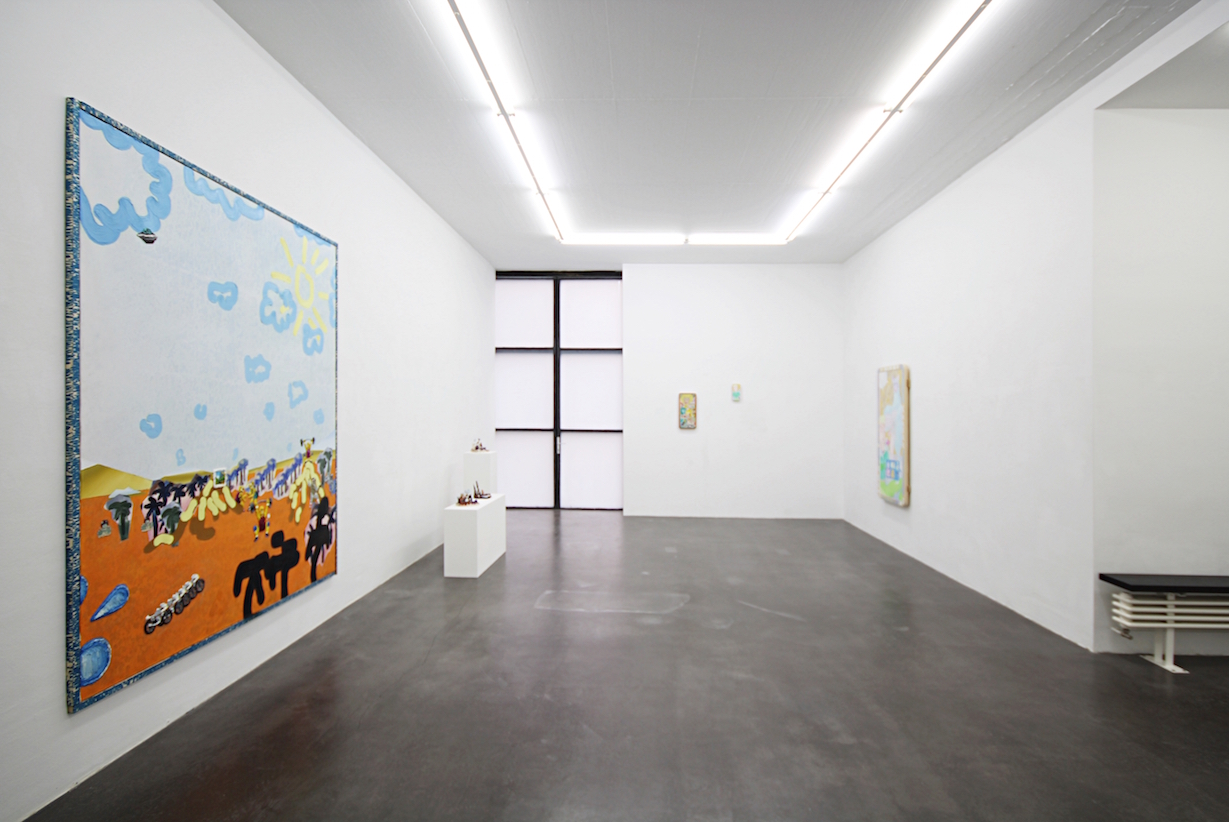 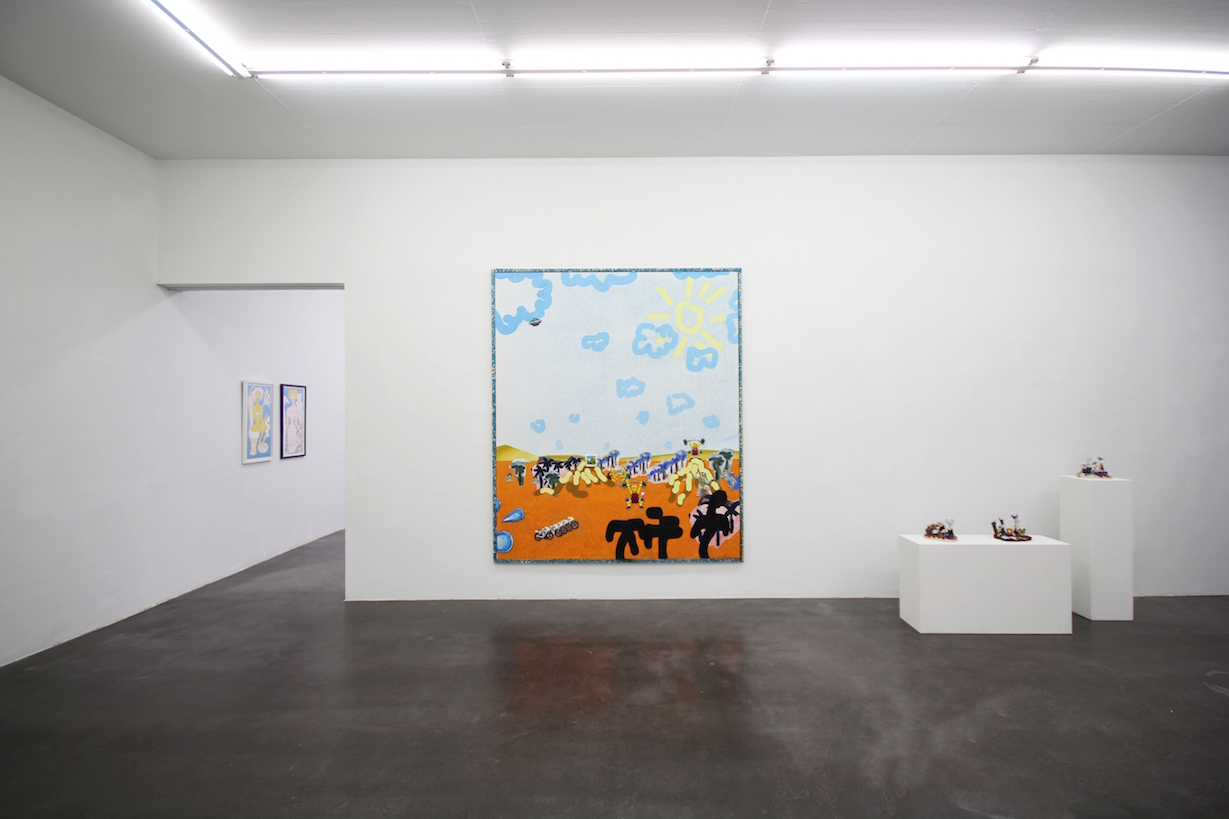 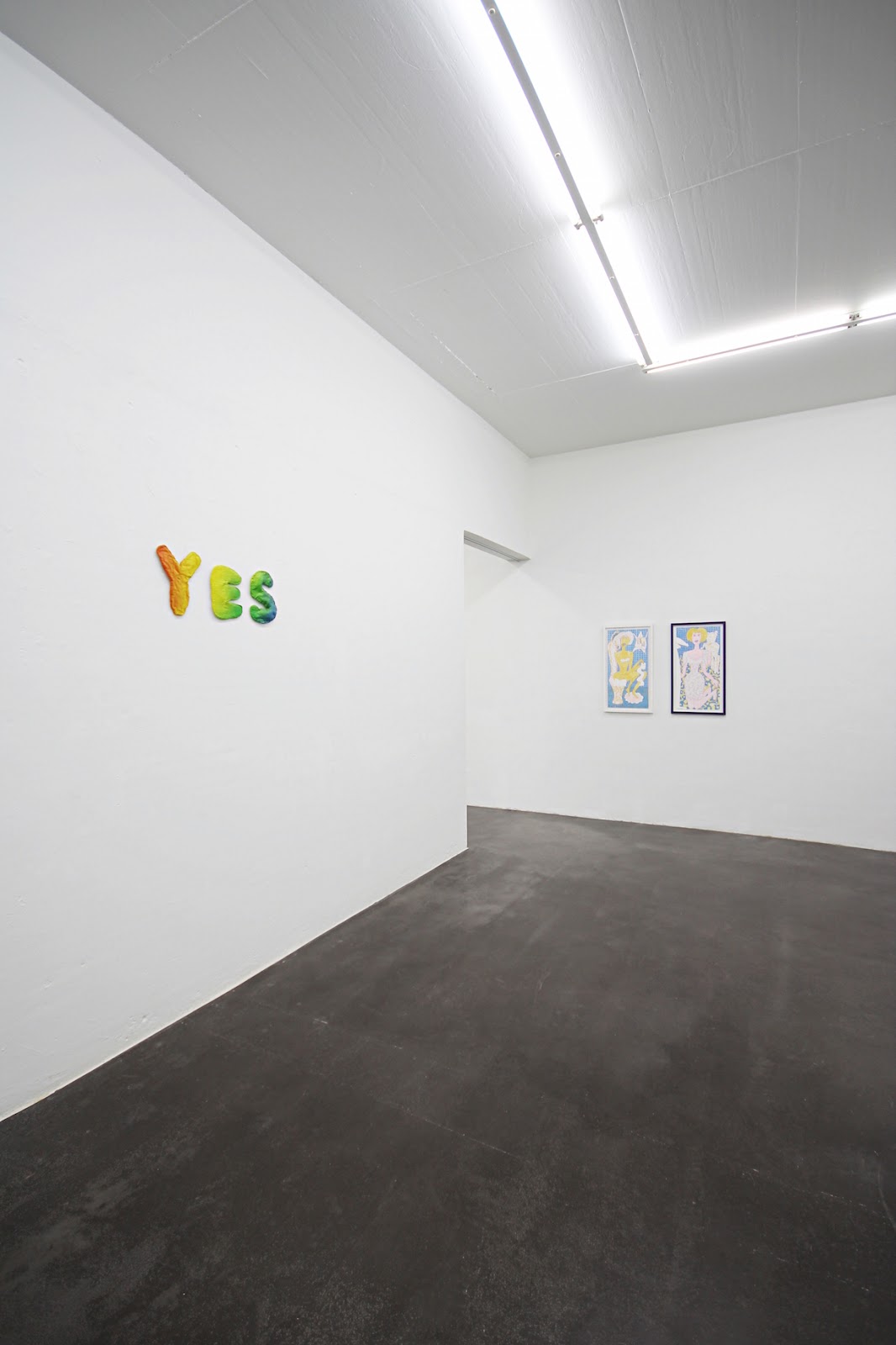 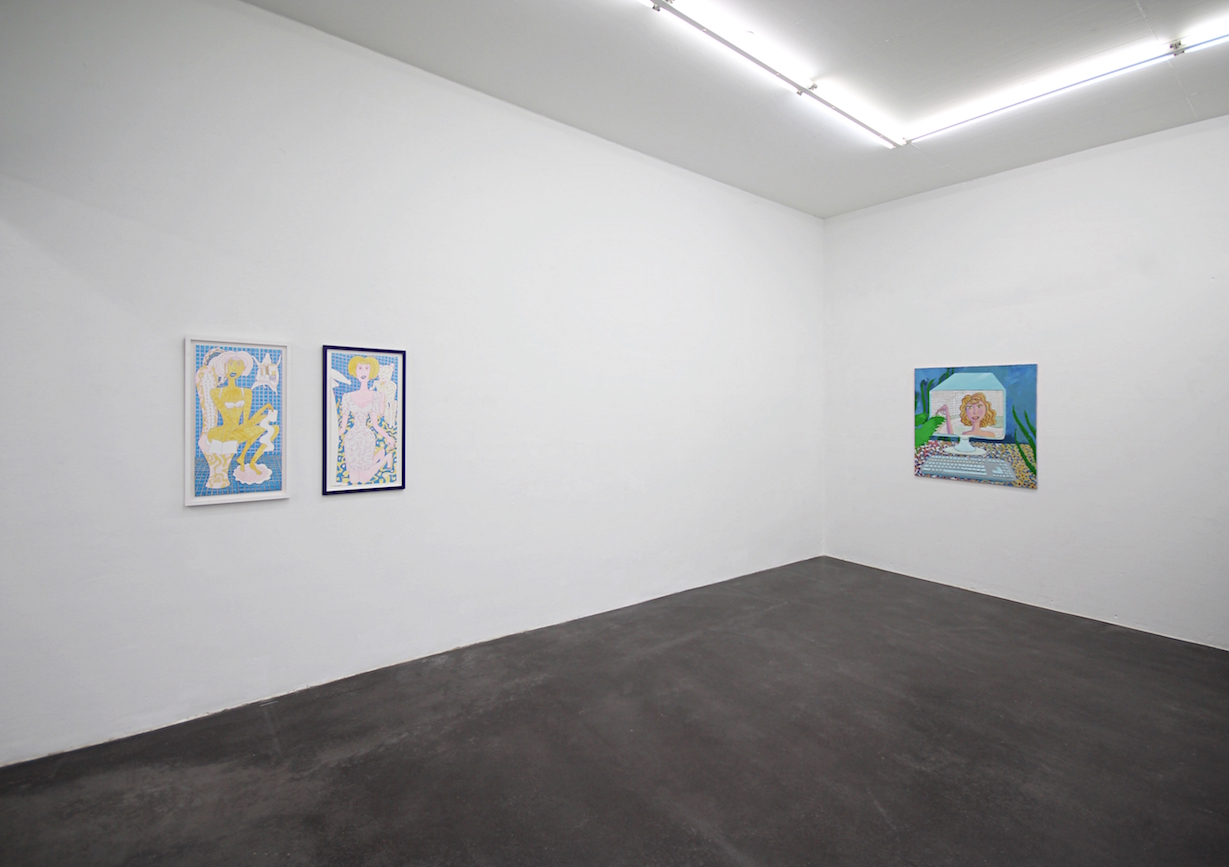 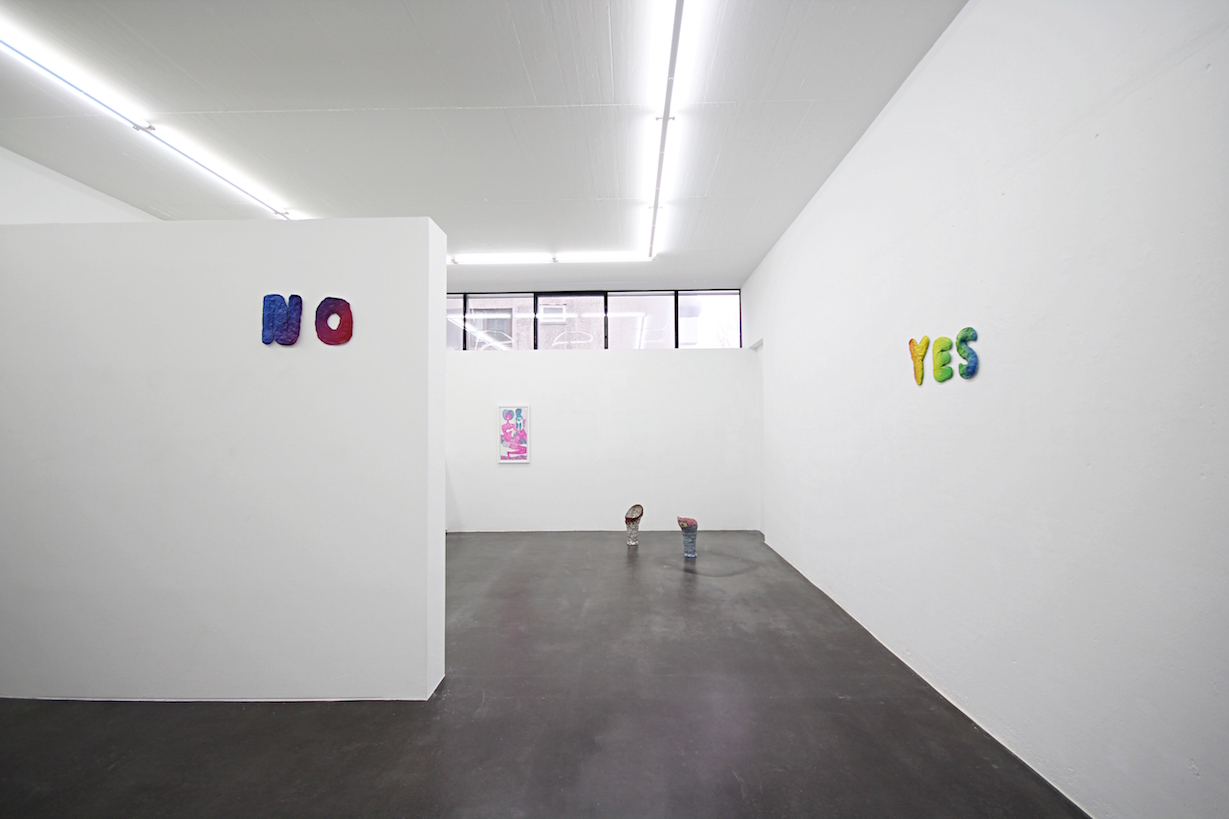 Same same but different, the group show #Strangerthings unites three different pictorial and sculptural positions, which show intersections in terms of color and the use of popular symbols and words, but formulate content-independent concepts and questions on society and now.

Munich-based artist Hell Gette(* 1986 RoK / studied in Munich with Markus Oehlen) playfully exaggerates all that has long been described in the recent art discourse as Post-Digital Art. Gette utilizes the almost arbitrary language of fast network communication with Emojis and digital picture elements - she succeeds in lending a mischievous irony to the cosmos of the exchange of superficial feelings and brief information with a skillful grounding. The combination of such diverse techniques as Mirage Print, app-based Emoji insertions and pasty paint application on canvas creates a cleverly thought-out, joyful and, so to speak, critical visual language.
Not only in her paintings, also in objects such as the show's eponymous ceramic #Strangerthings Hell Gette combines elements of the digital world with analog art. Gette not only reflects how she deals with her own perception of the world, but passes the bar on the viewer. The classification of the well-known image motifs in a mix of pop art, digital symbolism and conventional themes not only ensures a happy moment when watching, but also helps create a visual synthesis of different levels. Thus, Gette achieves an unexpected depth with her colorful fantasies and is able to use her art - almost like in a computer game - to easily reach the next level - welcome to the "Post-Post Digital Art".

Magdalena Kita’s (* 1983 Debica, PL. / studied in Krakow and at the Düsseldorf Art Academy with Rita McBride, Tal R and Herbert Brandl / Kita lives in Cologne) color palette is characterized by pastel-like tones. Kita uses gold grounded wooden panels covered by golden ground as image carrier. The motifs she uses seem to be as easily associated with a naïve language as Hell Gette’s pictorial worlds - but of course the appearance is also deceptive in Kita’s works. The composition of the images suggests icon quotes. However, the figures that populate her icons are not chaste, devout saints, but sirens claiming the Garden of Eden in a self-determined way. The bible frivolously greets. Magdalena Kita's women elude the viewer's simple aesthetic appropriation - they are formally presented in a childishly simplified way and are therefore readable in a multi-layered way. Kita laughingly shapes her new icons in the form of mobile phones. Although the gold rim still suggests  the origin as an icon,  the shape of  the Iphones can be understood rather as  a modern communication parabola. The pictures speak their own language: for Kita, the
spoken word dissolves completely in a visual image experience, rendering obsolete further explanations of the dominant role of its female characters and general moral conventions.

Color also plays a key role in Alessandro Leggio’s (* 1984 Ragusa, IT / lives and works in London) series of objects that come closest to the title #Strangerthings.
Leggio's sculptures oscillate between casual and optical exclamation points. “Yes” / “No” - as in Gette’s digital drawings and Kita’s icons – is direct, universally readable and an unambiguous expression of will. But Leggio does not make it that easy for us - rather he ignites ironic smoke grenades. What does the “Yes” / “No” stand for?
It requires a closer look at the material used. Similar to Magdalena Kita’s icons being no longer pure icons, the words are also given their own relevance in accordance with the origin of the material. These words are gluten formations covered with acrylic spray paint. Gluten, the substance that plays an increasingly discursive role in global food mass production. Gluten-intolerance as a consequence of the over-industrialization of nutritional needs.
Just formally changed Alessandro Leggio continues the same theme by developing more of such sculptural expressions. Some covered with soft matt pigment others with acrylic spray paint. Leggio places small, colorful abstract objects as groups on the floor - again gluten, the critical factor. Is this signal color intent on deterrence - Yes or No? Anyway, #Strangerthings.