In conversation with Marco Montiel-Soto

A couple of years ago I discovered Marco Montiel-Soto, an artist from Venezuela, based in Berlin. His research, and mainly his work, explores the intersections between political and poetic territories, homeland and traditions, so even though he is not based in Venezuela anymore, his origins are a constant part of his pieces. In 2017, Montiel-Soto participated in Documenta 14 and Jeju Biennale, and he just finished a commendable year for his artistic career with two Biennials, 11thBiennial do Mercosul and 1º Riga International of Contemporary Art.
I had the pleasure of having a chat with Marco before his duo presentation (with Bianca Bondi) with JosédelaFuente at ARCOmadrid art fair next month where he will surprise us, again, with a new body of works, so I asked him a couple of questions in order to get closer to his practice.

MG: Let me start with the first question that came to my mind when I was thinking about our conversation. What comes after two biennials? (I cannot start with an another question) What happened there? What were your feelings?

MM: For me, working in biennials is very enriching because it allows me to develop more complex ideas, research and expeditions, and to be more risky in order to develop projects and installations in large dimensions and for an international audience. It is also rewarding to meet and exchange views with artists from many other countries.
The Bienal do Mercosul was very interesting. The team was so involved and supportive the whole time. They had a very recent curatorial concept and they count on the participation of excellent artists. I made very good friends.
The Riga Biennale was another level of work, without a doubt, one of the best exhibitions in which I’ve participated. The artists and their works were very powerful and they had a great professional team, thus the conditions made you really feel inspired working there.
This year, I received an invitation to participate in Bienal de Montevideo, which begins in October 2019.

MG: Do you feel that the possibility of being in a biennial after so many years of working is a sort of recognition for your efforts?

MM: The opportunity to be invited for a Biennial is related to how much the artist itself is involved with their works, the interest in continuing research, the depth of the presentation, the daily routine, the comparison of different cultures, the accumulation, deadlines, openings, emails, chaos… Yes, those things require effort somehow.

MG: Your work is mainly focused on your origins, your homeland, but you live in Berlin. When did you move and how do you manage to find materials from your country? Can you tell me more about your practice and from where you take references?

MM: I left Venezuela in 2002. The first years I was surrounded by a feeling of being exiled and a refugee. I travelled a lot and I lived in so many different cities in Europe, without knowing where to put down roots, and finally I obtained the residence permit in Berlin. When I have the opportunity I try to travel to Venezuela, more or less every two years, and I come back to Europe overweight and with extra luggage; the official international postal system doesn’t work properly. I still keep my studio in Maracaibo with a lot of artworks, objects, books, photographs, records and even a piano.
The pieces that make up the puzzle with which I make my installations and my ongoing projects are those that I collect along my travels and expeditions: videos, photographs, objects, postcards, sounds, maps, books, stories, etc. A diary written in movement about a fragmented travel, an archaeological territory. Sometimes the direction of the trip follows a compass that points to different directions at the same time. Occasionally I follow a geographical route laid out by old expeditions; other times, the map is written during the journey, or it is a trip in time.

MG: Explain to me, when and why did you decide to focalize your research on Venezuela?

MM: If I remember right, I think I’ve had a gun pointed at my head about 4 or 5 times… The evolution of the economic, political, social and cultural crises in Venezuela is complex. The country, acceleratedly, has become ruins, it’s abandoned. We have lost even our traditions as a society, the personality of a country. We have even lost our memories and it seems that we have lost our future too. The museums have been seized for a long time and radical censorship has been established on all kinds of thoughts that confront the regime; it is practically forbidden to think differently.
In a large part of my work I question these limitations; it is extremely difficult not to think about the current situation of my country. Everything is upside down.

MG: I cannot forget the first time I saw “la verdad no es noticia”, a series of newspapers covered by acrylic paint. Is the idea of censorship the one you want to transmit with this series?

MM: Yes, la verdad no es noticia ( the truth is not the news) is a censored newspaper from news of Venezuela. Nowadays, the printed press does not exist and the few newspapers in the country can only print a 4-6 page copy. The majority of newspapers, radios and TV channels have been forced to close; they have gone bankrupt and journalists have been persecuted. The few that survive have only an internet website, but internet there is limited and slow, and many of those pages have been blocked by the government.
la verdad no es noticia is somehow a relic; as the newspaper doesn’t exist on paper, those pages are proof that it did exist. The newspaper’s real name is: "La verdad” (the truth), and was created in Maracaibo. The pages I normally use for my artworks are those printed around 2002, when I worked as a photo journalist for them. In “la verdad no es noticia” we can read some relevant headlines of that year and we can see photographs there, some of them taken by me, but censored or covered in 2015. The colour of the paint has different meanings: red is for violence, green for military news, silver for the economy, gold for achievements and black and white for political news.

MG: What about “Maracaibo Monumentale”? Last month wildpalms chose one collage of this series for the first number of This is Jackalope. Is this an ongoing series? Why did you choose collage as a medium?

MM: In Maracaibo Monumentale, the present overlaps the past, as a futuristic vision of the ruins of a country or as an apocalyptic visualisation of a period of Roman colonization in Maracaibo. The basilica of the city is replaced by an aqueduct and on the top of Baralt theatre a monument emerges. The pages are images of Maracaibo taken from antique books that show a clean and modern city during the petrol boom: its harbours, markets, bridges, avenues, etc., nowadays, only memories in the collective imagination of Maracucho, from the people of Maracaibo. The transparencies on top of the pages come from the publications of an Italian book from the 70’s – Now and then – that show the current appearance and from that time of the monuments of the Roman empire in Italy: the Colosseum, the Pantheon, Villa Adriana, Villa del Este, Pompeii, Ostia, etc.

MG: At ARCOmadrid you will present a new body of works. Could you please tell us what those pieces are about?

MM: I will present new pieces from the series Maracaibo Monumentale and one work made with Venezuelan banknotes of 100bs (Strong Bolivar). The piece is composed of 210,000 strong Bolivar arranged as a wallpaper. The question is not how many things you can acquire now with this amount of money or how many you could buy ten years ago. The work seeks to compare the value of money as a basis of purchasing power and social status level. Also, it makes reference to the hyperinflation and corruption that happens in Venezuela.
I will also show the beginning of a new series that I am working on right now. There’s a group of postcards from Venezuela that have been sent to Spain by friends and relatives over the last sixty years. In those postcards we can see landscapes, monuments, beaches, swimming pools, hotels, churches, industries, motorways and bridges from different cities of Venezuela. On the back of those postcards we will find stories, greetings, memories and congratulatory messages from a country open to tourism.

MG: What advice would you give to someone that is starting his/her career? Is there something you did that helped you at the beginning? Probably travelling?

MM:For sure, traveling always helps, and each trip is the beginning of a new project, of a new expedition. In any case, the most important thing is to constantly take risks.

MG: You are represented by two galleries, JosédelaFuente and Carmen Araujo. As an artist, what do you think about the contemporary art market?

MM: I try to focus my work towards my needs as an artist, as a curious person, moved by the results of my research and by the historical context of the place where I am. I think that the art market should fit the needs and formats of the artist, and not the artist to the needs of the market. 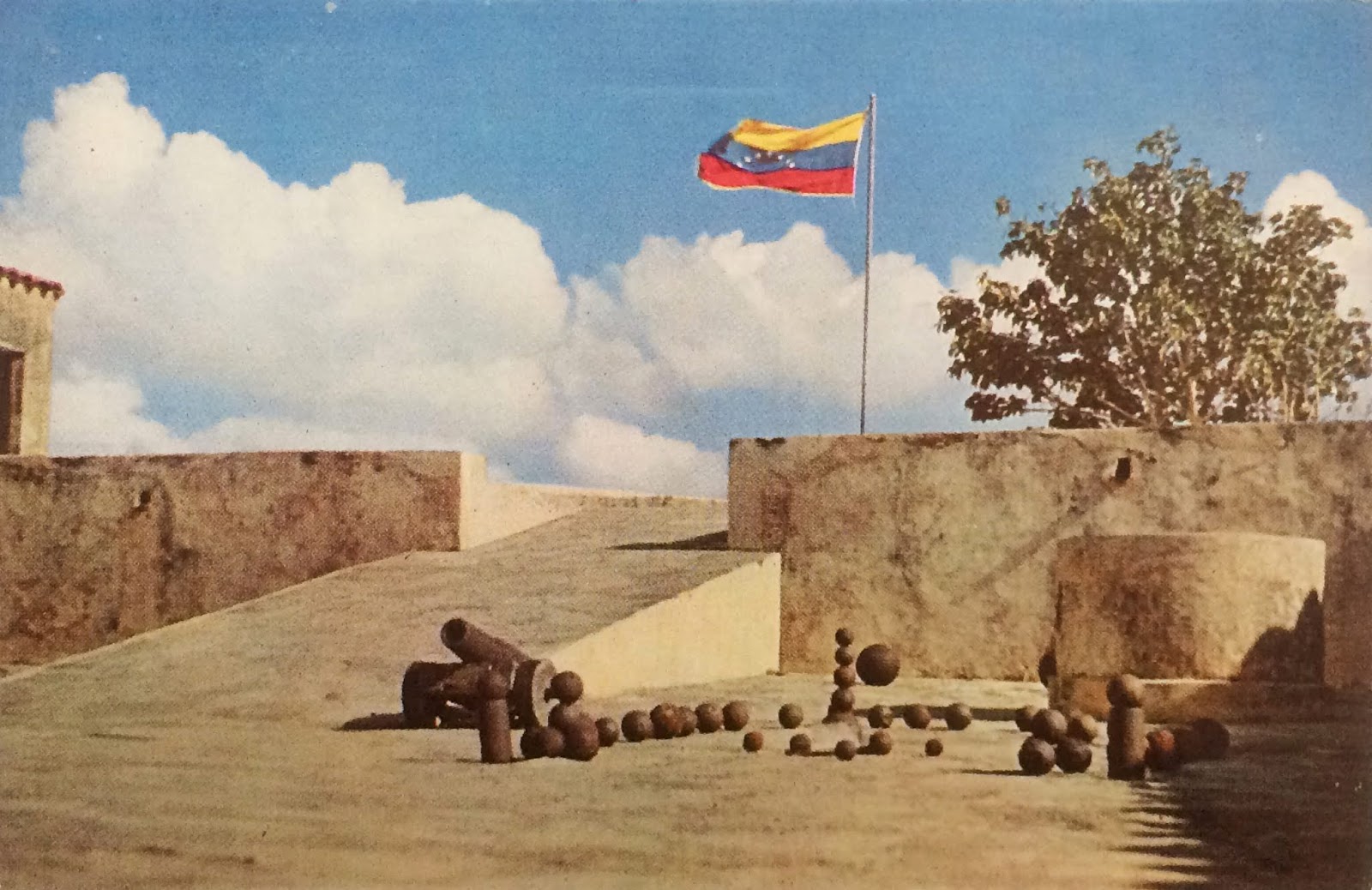 MG: Last but not least, we will see you at ARCOmadrid, but, do you have any other exhibitions coming up?

MM: At the end of February, I will present three videos of the series “Tratado de Maracas” (Treaty of Maracas) in a group show at Pasto gallery in Buenos Aires. In March I will take part in a group show at Revolver gallery with the video “Reconversión” (restructuring). My solo show at CAAM, Centro Atlántico de Arte Moderno in Gran Canaria will open in July. Bienal de Montevideo, Die Ecke gallery and a site-specific project in Baku will come later this year.