This future is unthinkable. Yet here we are, thinking it at Damien & The Love Guru / Brussels

This future is unthinkable. Yet here we are, thinking it curated by Juliette Desorgues 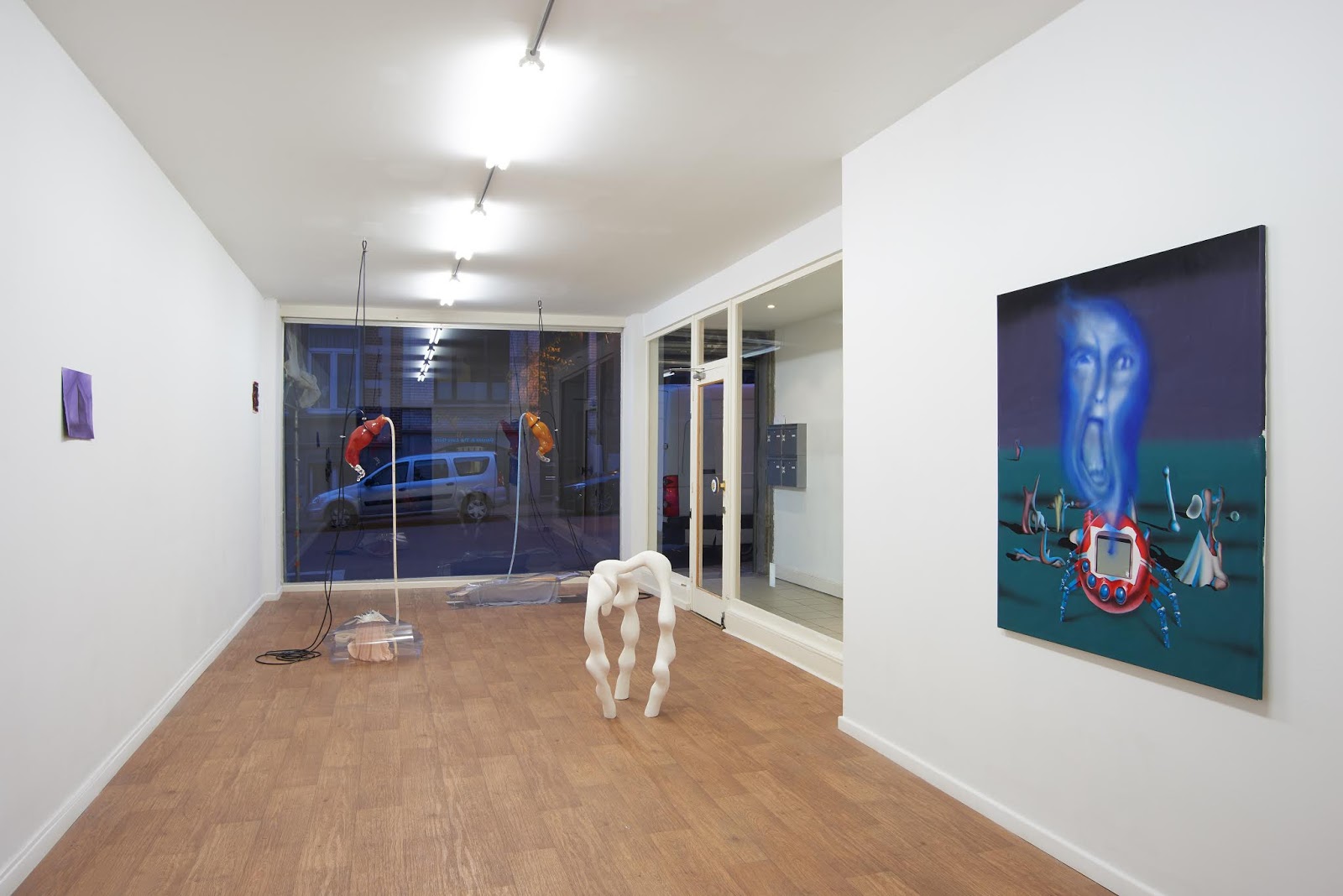 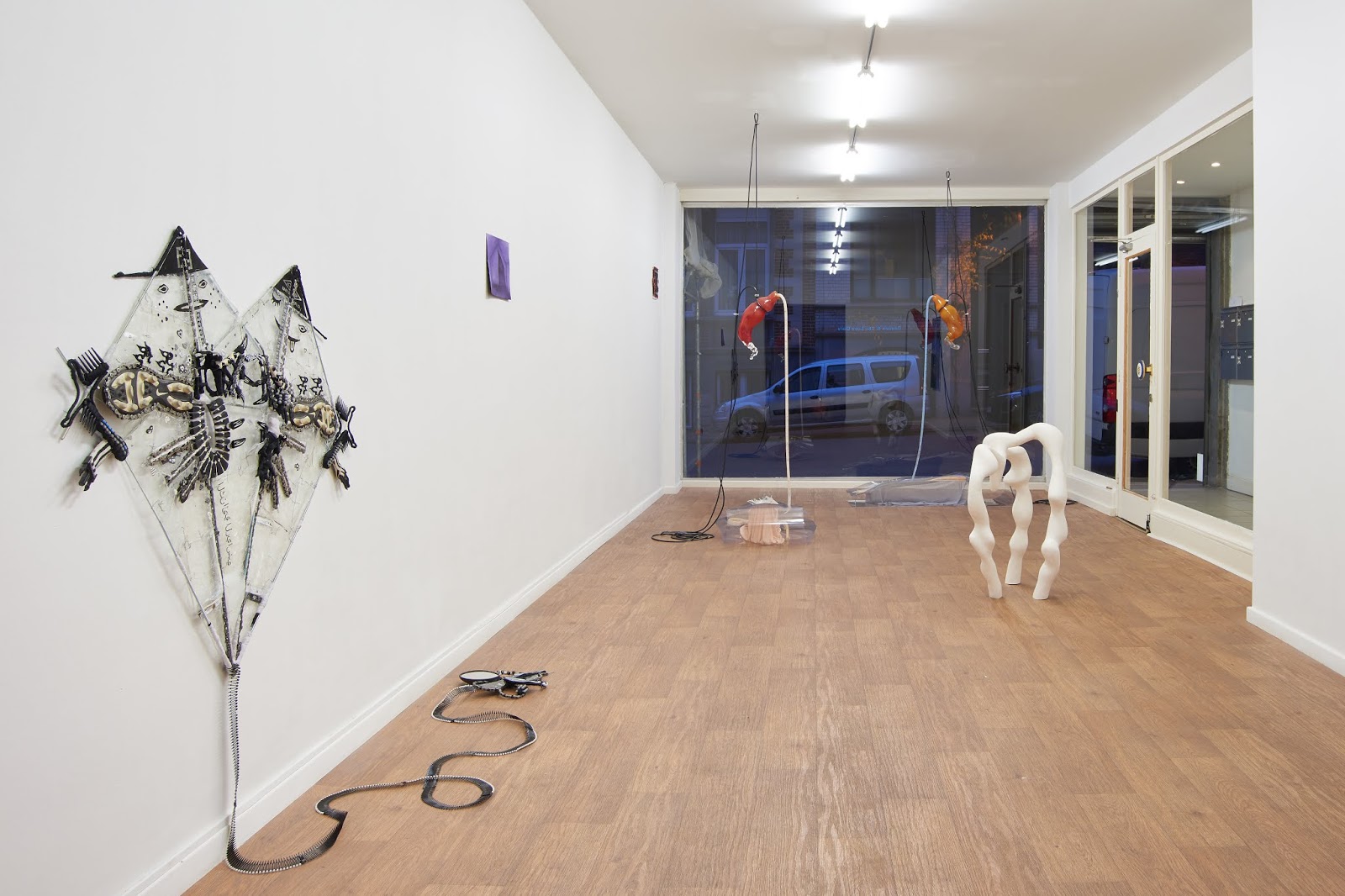 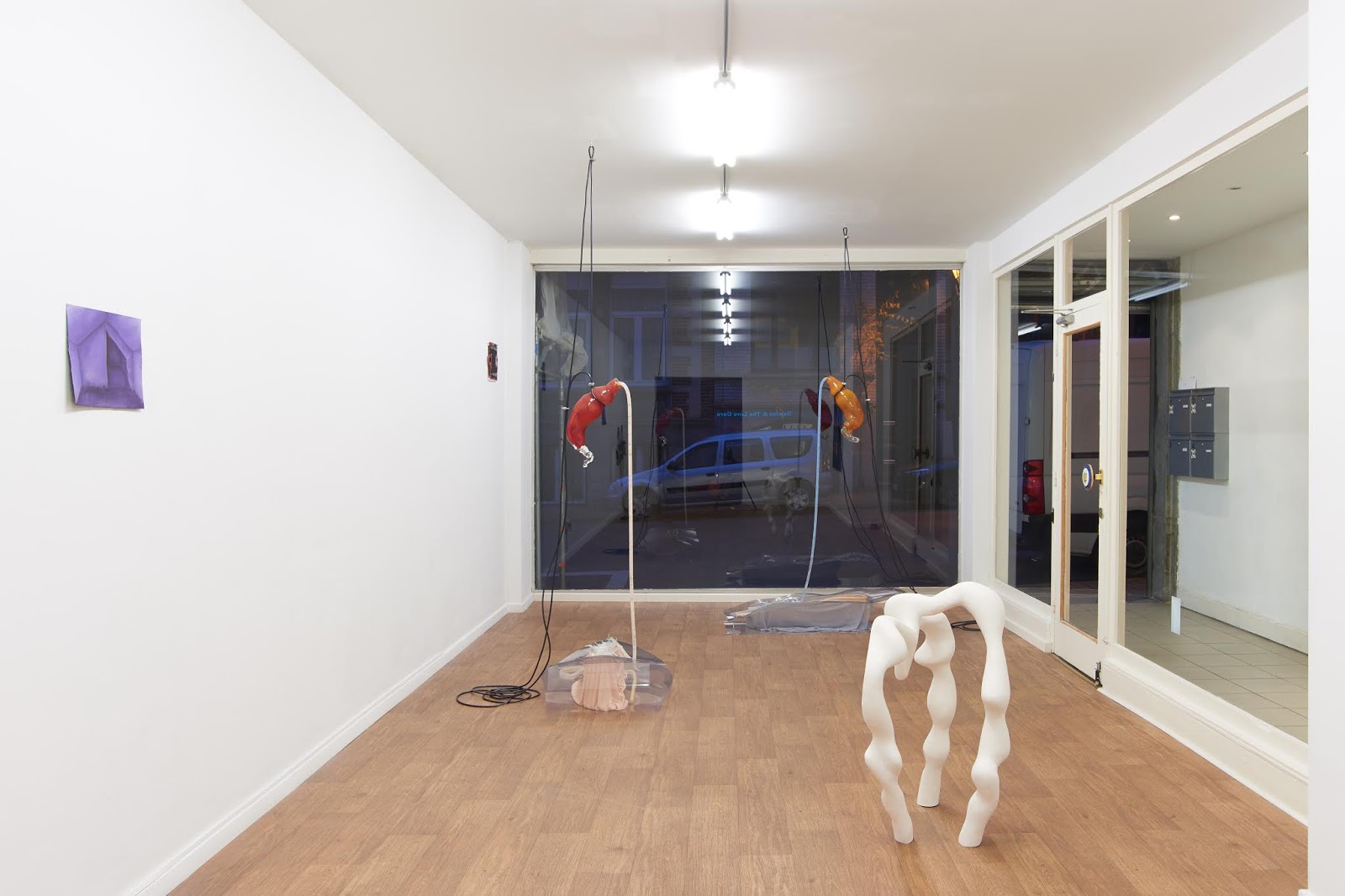 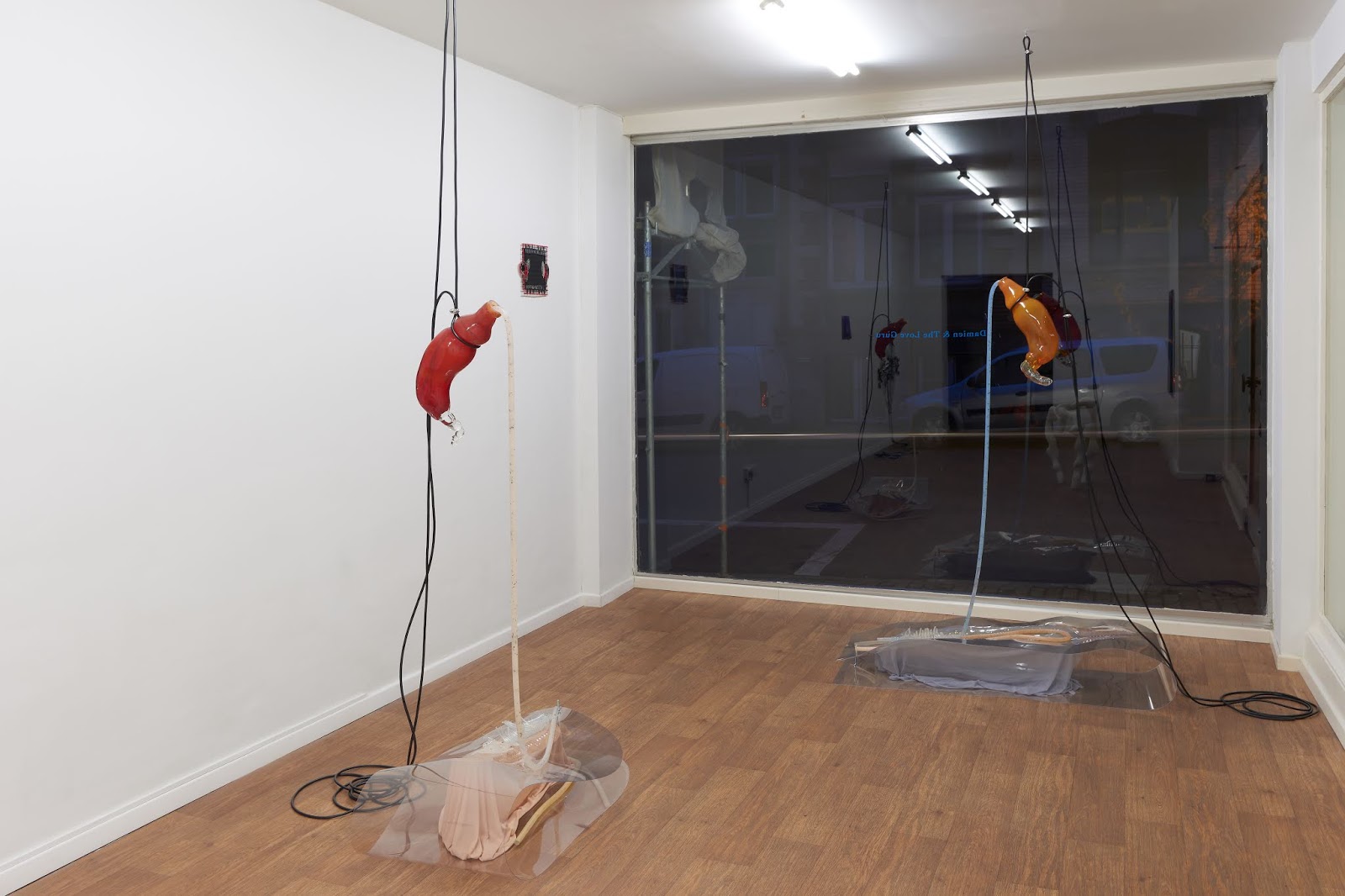 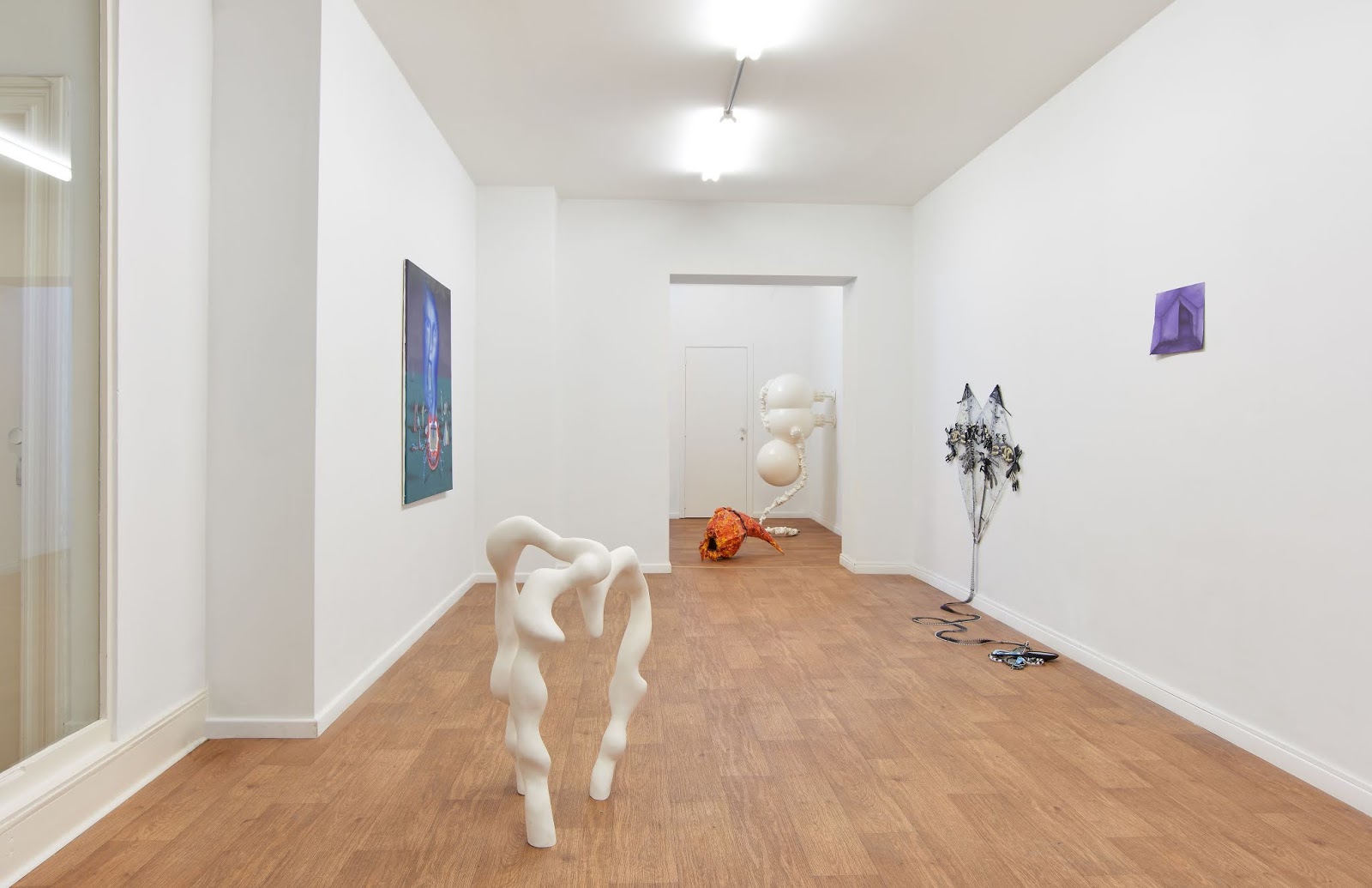 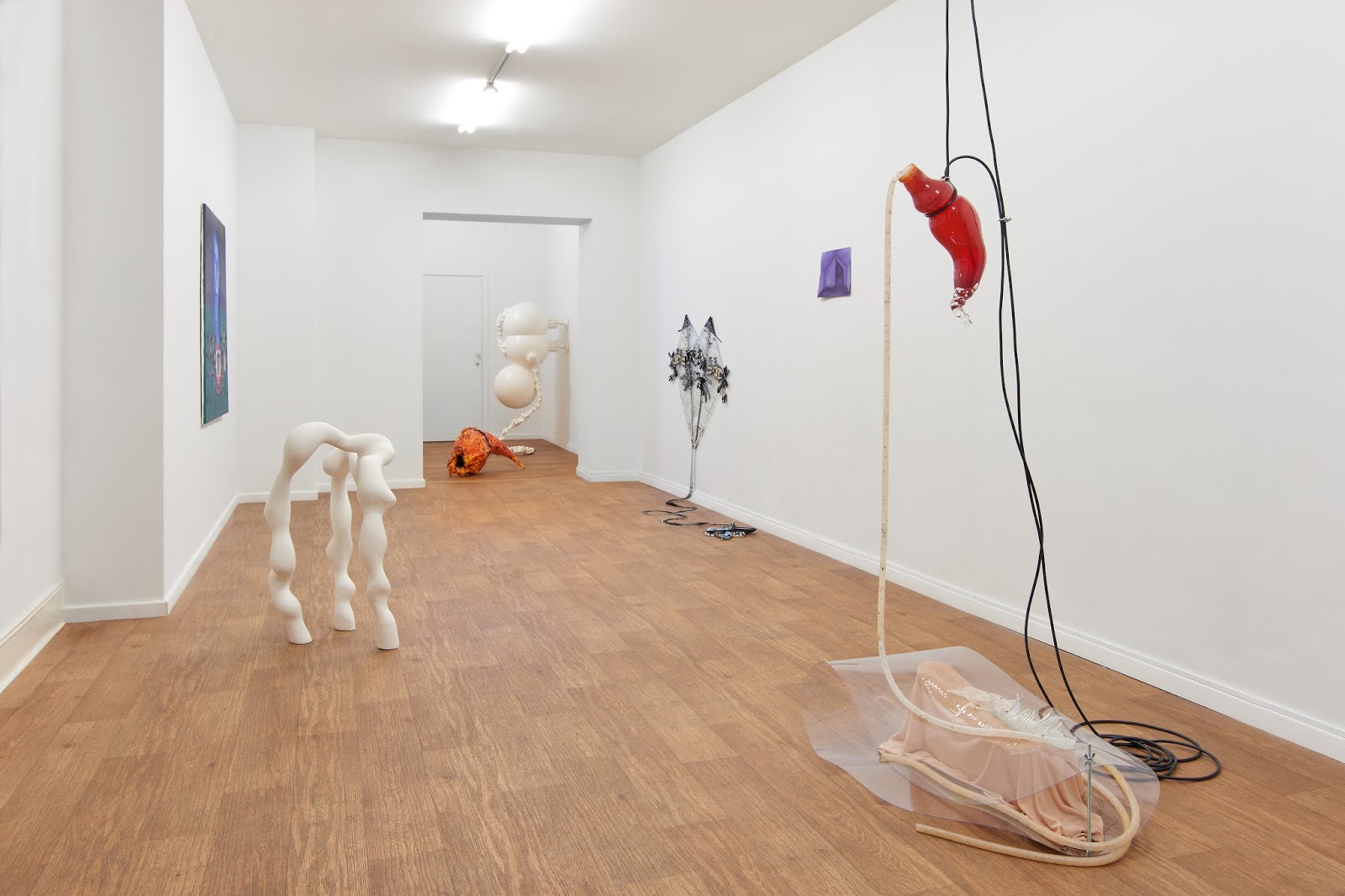 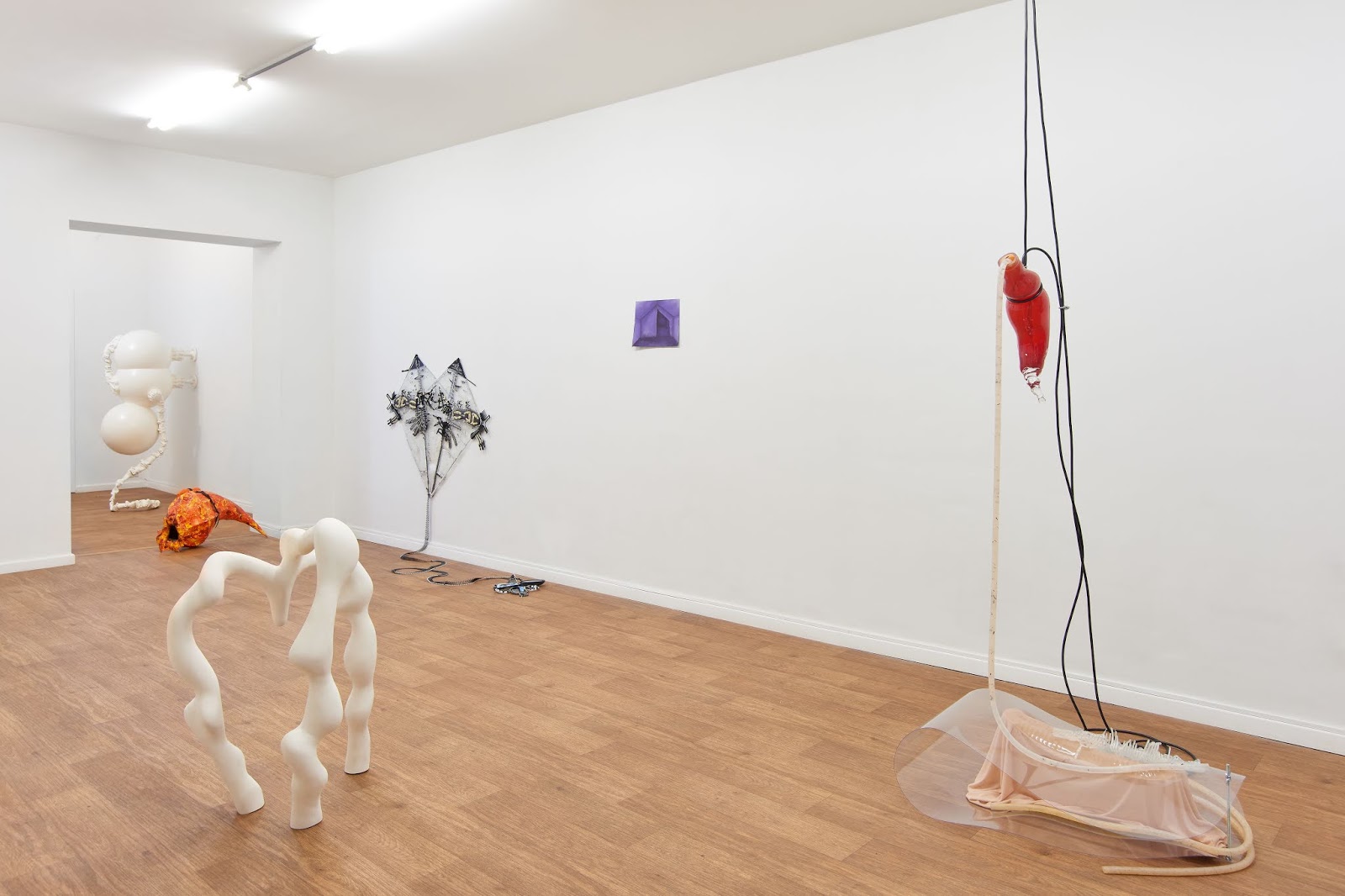 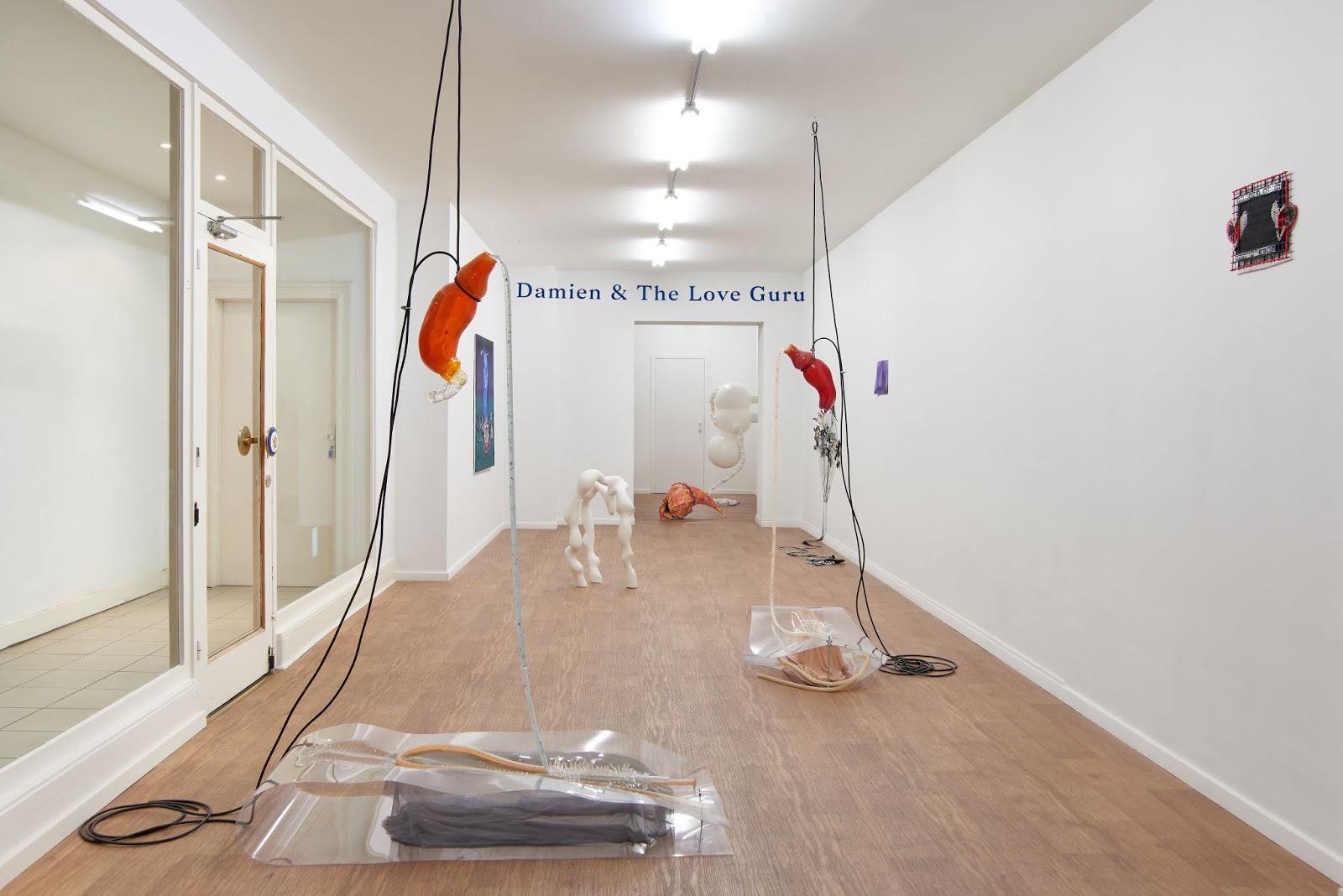 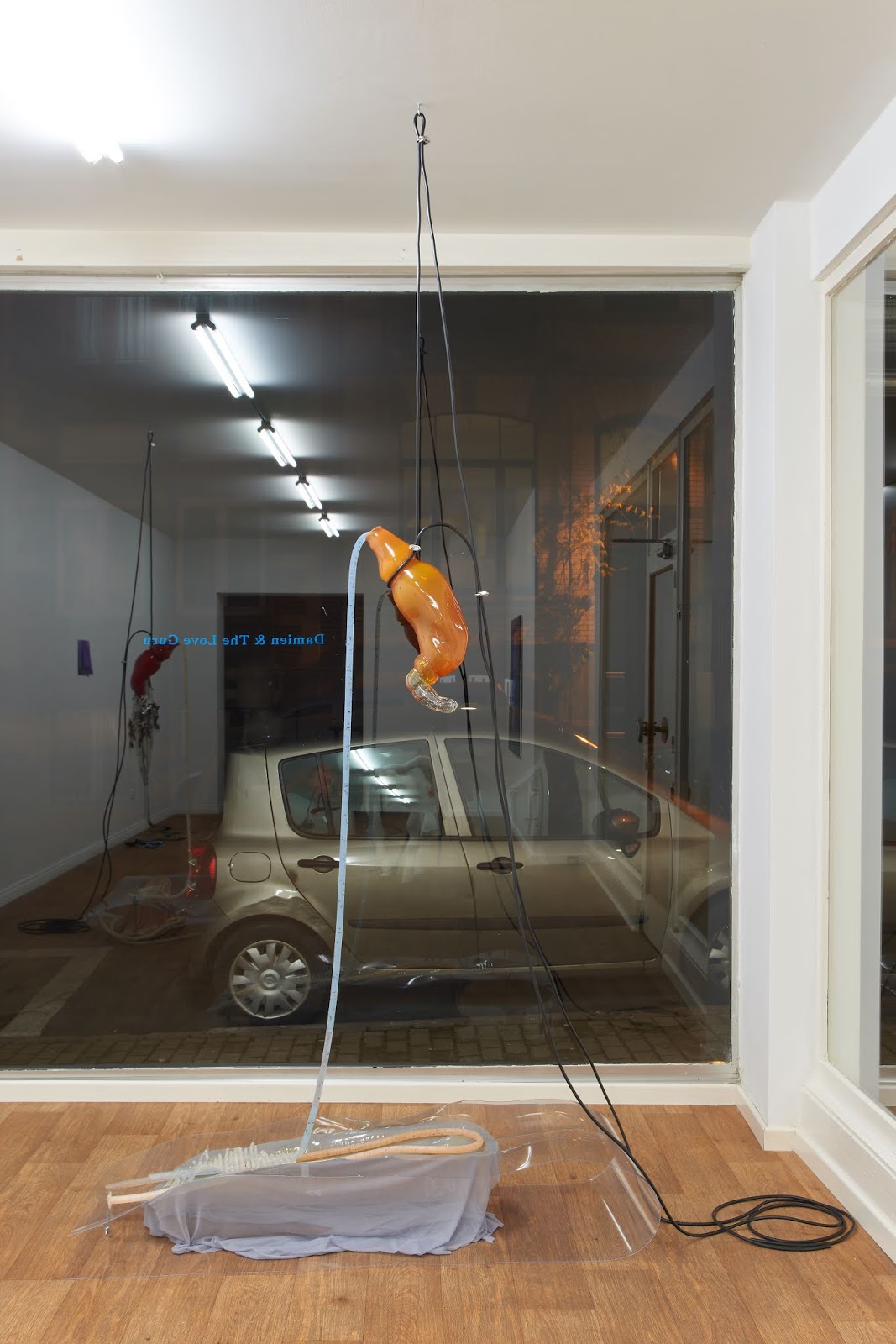 This future is unthinkable. Yet here we are, thinking it.
Coexisting, we are thinking future coexistence. Predicting it and more: keeping the unpredictable one open.
Yet such a future, the open future, has become taboo.
Because it is real, yet beyond concept.
Because it is weird.
Art is thought from the future. Thought we cannot explicitly think at present. Thought we may not think or speak at all.
If we want thought different from the present, then thought must veer towards art.
To be a thing at all – a rock, a lizard, a human – is to be in a twist.
How thought longs to twist and turn like the serpent poetry!
Or is art veering towards thought? Does it arrive? The threads of fate have tied our tongues.
Tongue twisters inclined towards nonsense.
Logic includes nonsense as long as it can tell truth.
The logic of nonsense.
The needle skipped the groove of the present.
Into this dark forest you have already turned.
Timothy Morton, Dark Ecology: For a Logic of Future Coexistence (New York: Columbia University Press), p.1-2.
This future, which philosopher Timothy Morton begins to consider, serves as a backdrop for the exhibition presented. A distant future - or past - is imagined, wrought with destruction and decay, ravaged by the effects of anthropocenic capitalism. Like the serpent, this future world playfully twists and loops, biting its own tale. A multitude of beings—human, animal, vegetal, geological or technological—have long co-existed within its dark landscape.
Gradually, with time, the unpredictable occurs. A weird world emerges, inhabited by hybrid beings, sprouting out of the crevasses of the anthropocenic ground. Living both within and yet carefully eschewing the meshes of capitalist detritus, these interstitial creatures have evolved and morphed, guided by an infinite web of emotions.
From convulsing floral composites whose tails offer sexual play to insect-like creatures engaged in digital gaming, they are like tongue twisters of another time; haunting us amidst the chaos of our present world; reminding us to return to the joyful, playful gestures of the everyday.

Rebecca Ackroyd is an artist who lives and works in London. She graduated from the Royal Academy School in 2015 after completing her BA in Fine Art at Byam Shaw School of Art in 2010. Most recently Ackroyd has presented solo exhibitions at Gallery Weekend Berlin – Peres Projects, 2018; DRAIN – Galleri Opdahl, Stavan- ger, Norway; The Root – Zabludowicz Collection invites series, London; House Fire at Outpost Gallery, Nor- wich. Recent group exhibitions include: Independent Art Fair, New York; Beacons/ Pharos – Caustic Coastal, Manchester; Lit – Union Pacific, London; Walled Gardens in an Insane Eden – z2o Sara Zanin Gallery, Rome and many more. Ackroyd’s practice involves digging down into existing objects and memories and recon- figuring them into something new. Her installations offer dream-like fictional landscapes informed by tough realities. Through shifting scales and moods, from the arrestingly bold and absurd to the subtle and intimate, the work pursues a feminist exploration of the psychology of space and the ownership of bodies. At Rupert the artist is planning to make a series of drawings and written works that correspond with one another and will explore the context of her artistic practice as a whole.

Carcrash is an artist and writer who lives and works in London. Graduated from Goldsmiths College in 2017 in Fine Art and Art History. Carcrash performs regularly in London‘s queer cabaret scene, notably at Bar Wotever, Royal Vauxhall Tavern and has performed at the Institute of Contemporary Arts, London, Boiler Room and internationally in Paris, Zagreb and Shanghai. Carcrash works on long-term film and performance projects with children as Artist in Residence at Temple Grove Free School and runs their own science-fiction, arts education company, Space Kids CIC.

Roxanne Maillet is an artist who lives and works in Brussels, Belgium. Born in 1991 in France. Roxanne Maillet questions reading as a collective and feminist practice. Her work tries to capture the transition be- tween orality and writing, within a perpetual slip and the fragile space of the dialogue, and using graphic design and typography as tools to inform on the contexts in which these exchanges took place. All of that with an ironical awareness of the limits of translation from one medium to another. She is inspired by camp aesthetic — this word used to designate the deliberate appropriation of artifice and gender clichés. In 2016 she founded Cave Club , an underground space in Brussels where writers are invited to deliver their writ- ings and to transform them into a medium of exchange with an assembly. Since 2017 she runs the non-bina- ry typography workshop Gender Fluid where she invites participants to reflect on possible alternatives for language structures imposed by heteronormative French language. Selected projects include: Cave Club w/ Léa Beaubois, Synesthésie Mmaintenant, Saint-Denis (FR), 2019; Cave Club, Q-O2, Bruxelles (Avec Stine Sampers), 2018; Fremdkörper : Non—Normative Body and Voice Mapping, BOZAR, Bruxelles, 2018; Cave Club, Hélène Mourrier, Popposition, Former Atelier Coppens, 2018; Cave Club , Sabrina Soyer, Paris Ass Book Fair, Palais de Tokyo, Paris, 2018; Graphic coordination of the exhibition L’âge de Nylon by Georgia René Worms, Ravisius Textor, Nevers (FR), 2018 ; Visual identity of Girls Heart Brussels (BE), 2018; Graphic co- ordination of the exhibition Vos désirs sont les nôtres, La friche Belle de Mai, Marseille (FR), 2018; Research, book and exhibition design, BAL Brussels Almanach Lesbian , with Loraine Furter, Mia Melvaer and Jessica Gysel, at Mothers and Daughters, Brussels (BE), 2018; Selected publications include: 2019; Publication Îlles by Georgia René - Worms, t-o-m-b-o-l-o press (upcoming), 2019; Publication Que Faire?, Liv Schulman, Im- mixion Books, 2018.

Vanessa da Silva is an artist, currently based in London. Born in São Paulo, Brazil. She holds an MA Painting from the Royal College of Art, London, and a BFA in Product Design from FAAP Faculty of Fine Art, São Paulo, Brazil. Selected exhibitions include: “Artworks Open” curated by Tai Shani and Emma Talbot, Bar- bican Arts Trust (2018), ARCO Lisbon, Opening section curated by João Laia (2018); “I Am He As You Are She As You Are Me” curated by Kiki Mazzucchelli, House of Egorn, Berlin (2018); “That Same Far Place”, Chezkit, Pantin (2018); “Stranger than Paradise”, StudioRCA Riverlight, London (2017); Herland, Bosse & Baum, London (2017); “Seamless Territories”, Blyth Gallery, London (2017); “With Institutions Like This...” curated by Victor Wang and Alex Meurice, The Averard Hotel, London (2016); “Fur” curated by Pablo León de la Barra, White Cube Toilet, London (2012). Performances: “Muamba Grove”, Fitzrovia Gallery, London (2018); “Stranger than Paradise” StudioRCA Riverlight, London (2018); “Resistance’s Flow”, Royal College of Art, London (2017). Vanessa was shortlisted for the VIA Arts Prize, London (2018), in 2017 she was selected by Richard Wentworth for the Almacantar Studio Award and was awarded the Fall Residency Program at Ox- Bow, USA. In 2019 Vanessa will be an artist in residency at Pivô Research, São Paulo, Brazil.

Anna Solal is an artist, born in 1988 in France, who lives and works in Paris. Her assemblages are made from urban and domestic materials, often made of metal or plastic, picked up in the street or bought in stores. They are recomposed into aerial motifs, like birds or kites. Brutally figurative, this pop iconography, anxious and moving, highlights the isolation of the individual and the form of abstraction in which this individual navi- gates. She was recently awarded the Prix Meurice, Paris, France and has taken part in numerous exhibitions: Interstate Projects (New York), WeekendWeekendWeekend at New Galerie (Paris), 63rd77thsteps (Paris), Syd- ney (Sydney), Art-O-rama (Marseille), 9800 S Sepulveda (Los Angeles), Rijksakademie (Amsterdam), Belle air (Essen), Lodos at Museo Experimental El Eco (Mexico), Olso10 (Basel), Siliqoon (Milan), Operative Arte Contemporanea (Roma), The Ister (Brussels), Yaby (Madrid).

Matilda Tjäder is currently based in London. They work with text as material that is performed, sounded, directed and sculpted into varying forms of media. Observing the interface between the fictional and the real as source material, Tjäder often works in collaborative and conversational bodies as co-editor of the game- book project, The Key Cutters Series, co-founder of the artistic project Human Interference Task Force (HITF), and as the co-curator of Minibar, Stockholm (2014-2017). Tjäder is based in London. Recent and upcoming projects include LACA, Los Angeles (2019), Sink.Sexy, online platform (2019), Eastside Projects, Birmingham (2018), LUX Moving Image, London (2018), Clearview ltd, London (2018), Cell Project Space, London (2018), Fotograf Festival, Prague (2017), and ‘Caderno Sesc_Videobrasil magazine‘, São Paulo (2017). Their debut novel ‚Reprogramming Medusa‘ (working title) will be published in 2019.

Juliette Desorgues is an independent curator and writer based in France and the UK. She recently co-edited a publication on the work of Australian artist Helen Johnson (co-published by ICA, London and Artspace, Syd- ney, 2018) and curated the group exhibition “Hypersea”, artmonte-carlo, April 2018. She previously worked as Associate Curator at the Institute of Contemporary Arts, London (ICA), where she curated a number of ex- hibitions, commissions and events including “in formation” (2017); “Helen Johnson: Warm Ties” (2017); “The Things that Make you Sick: Loraine Leeson and Peter Dunn 1977-1980” (2017); “Bloomberg New Contem- poraries” (2016 and 2015); “Yuri Pattison: mute conversation” (2014). Prior to this, Desorgues held curatorial positions at the Barbican Art Gallery, London and Generali Foundation, Vienna. She studied Art History at the University of Edinburgh, the University of Vienna and University College London.