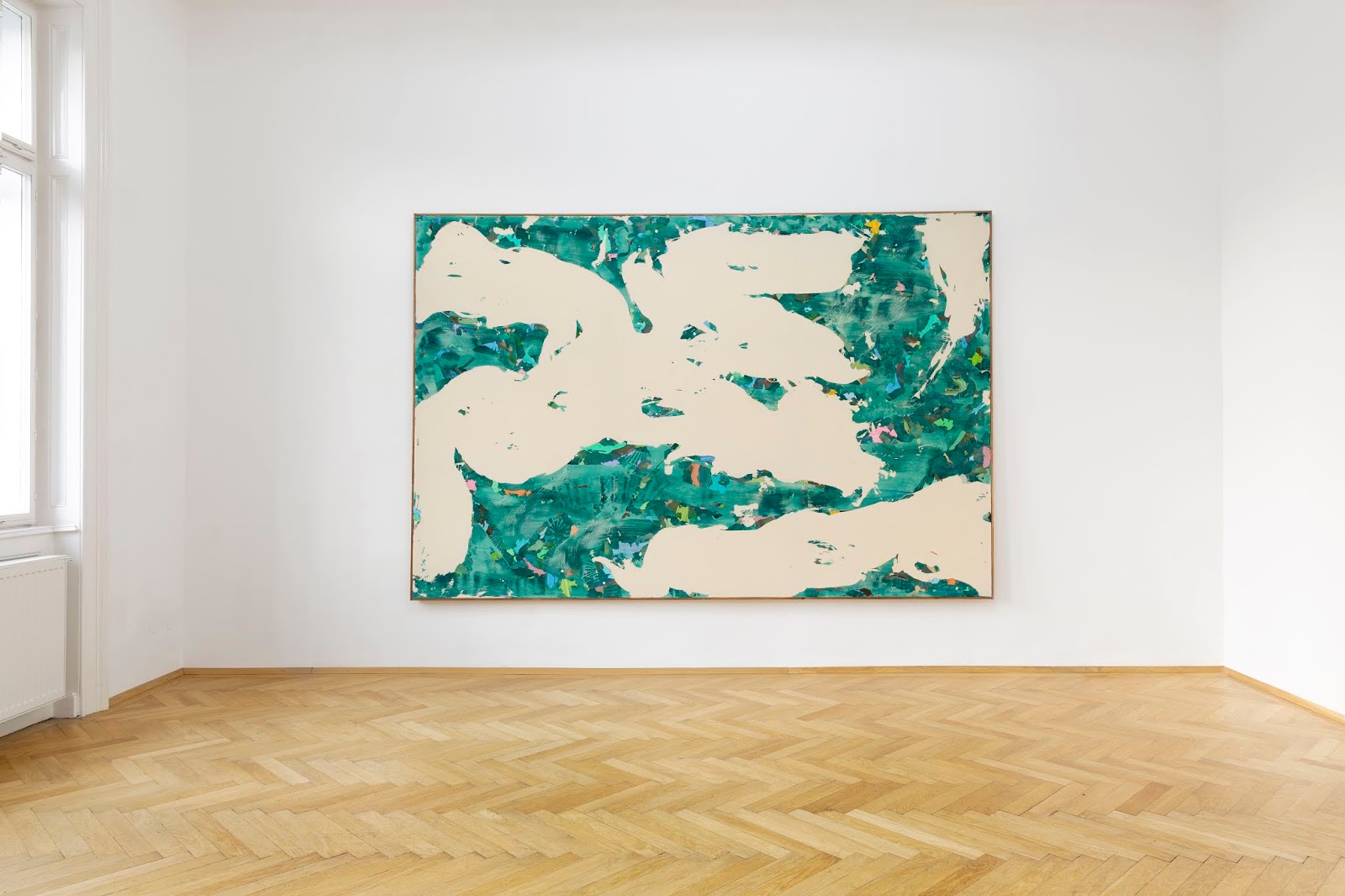 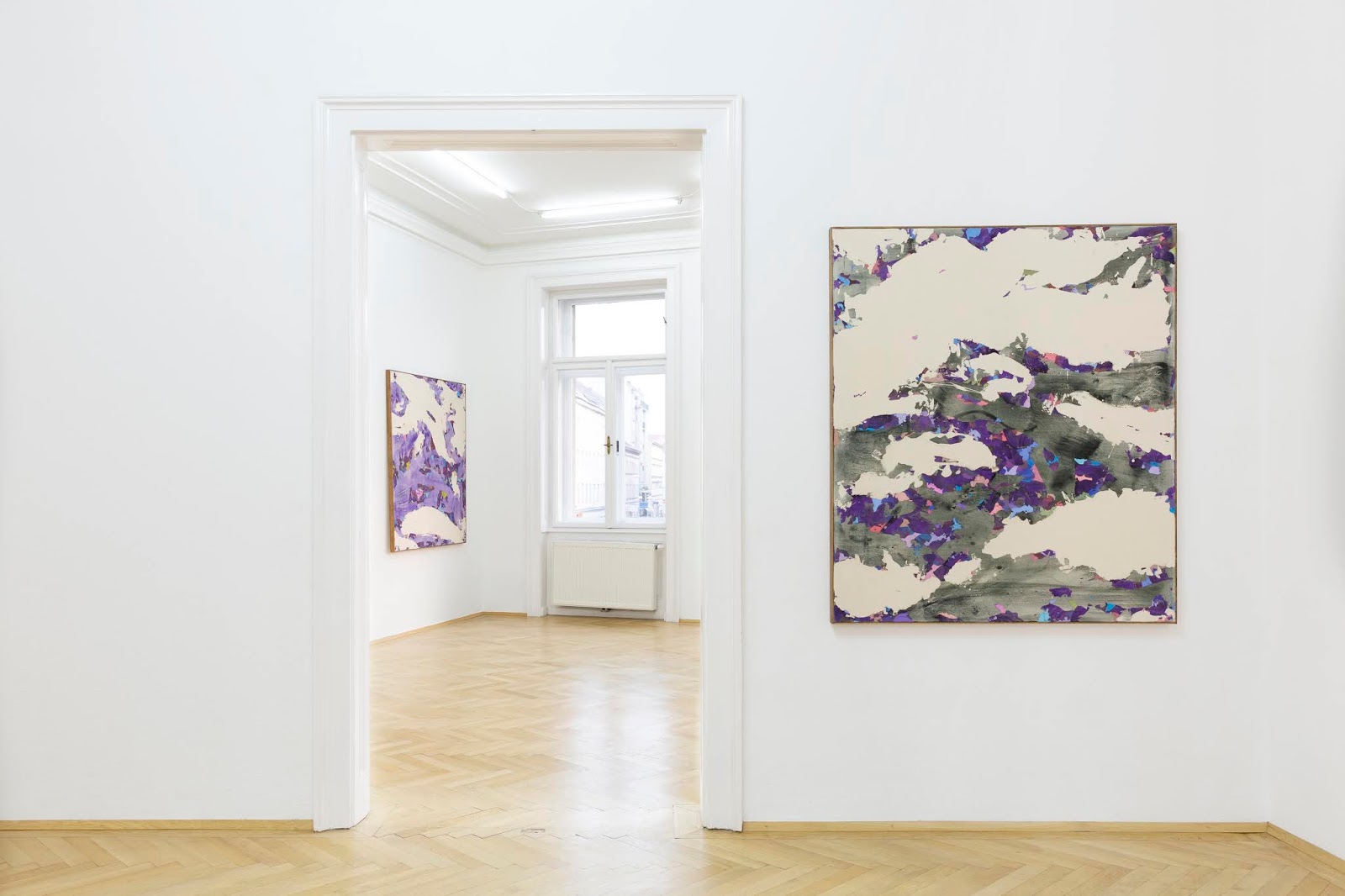 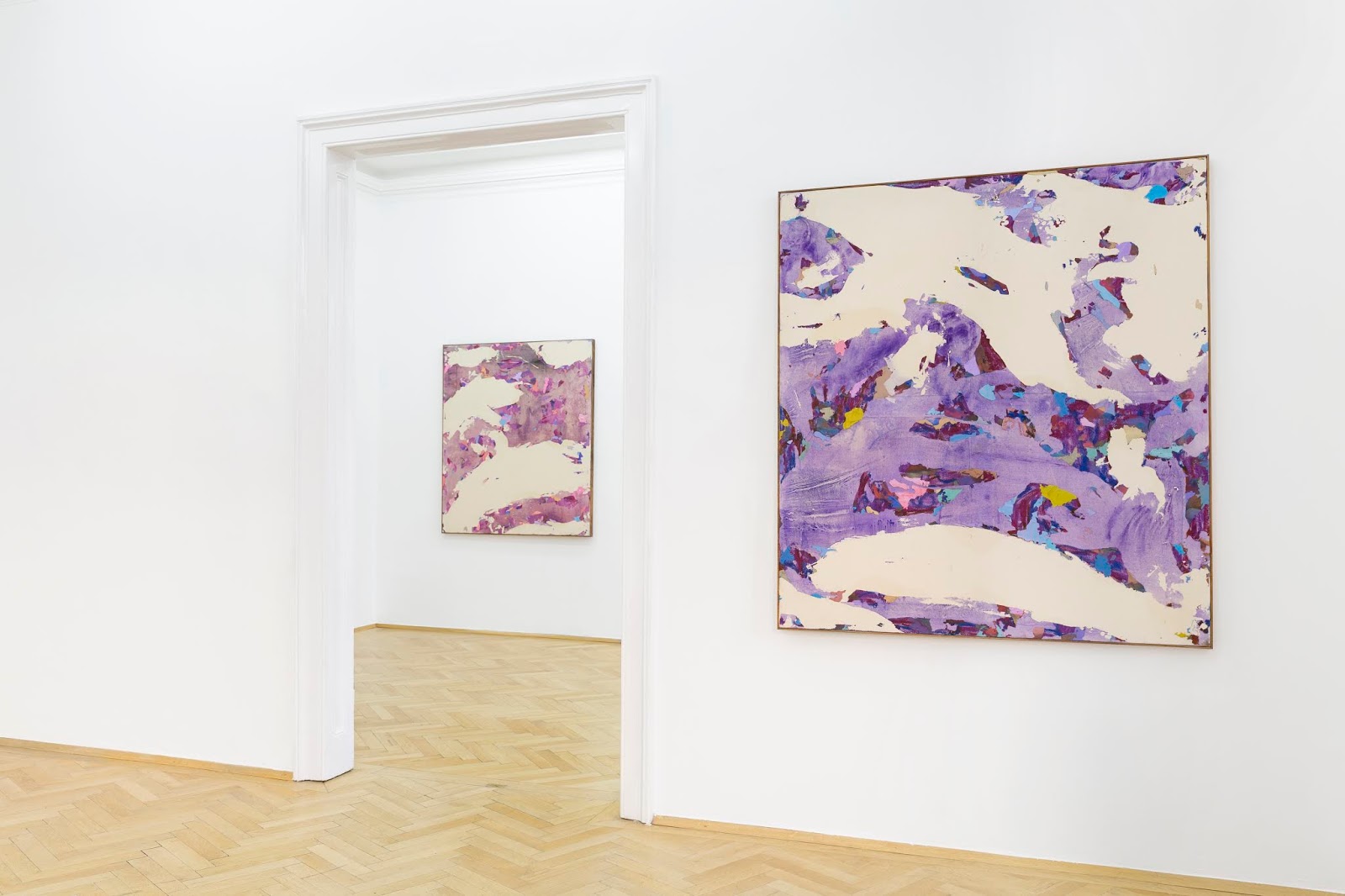 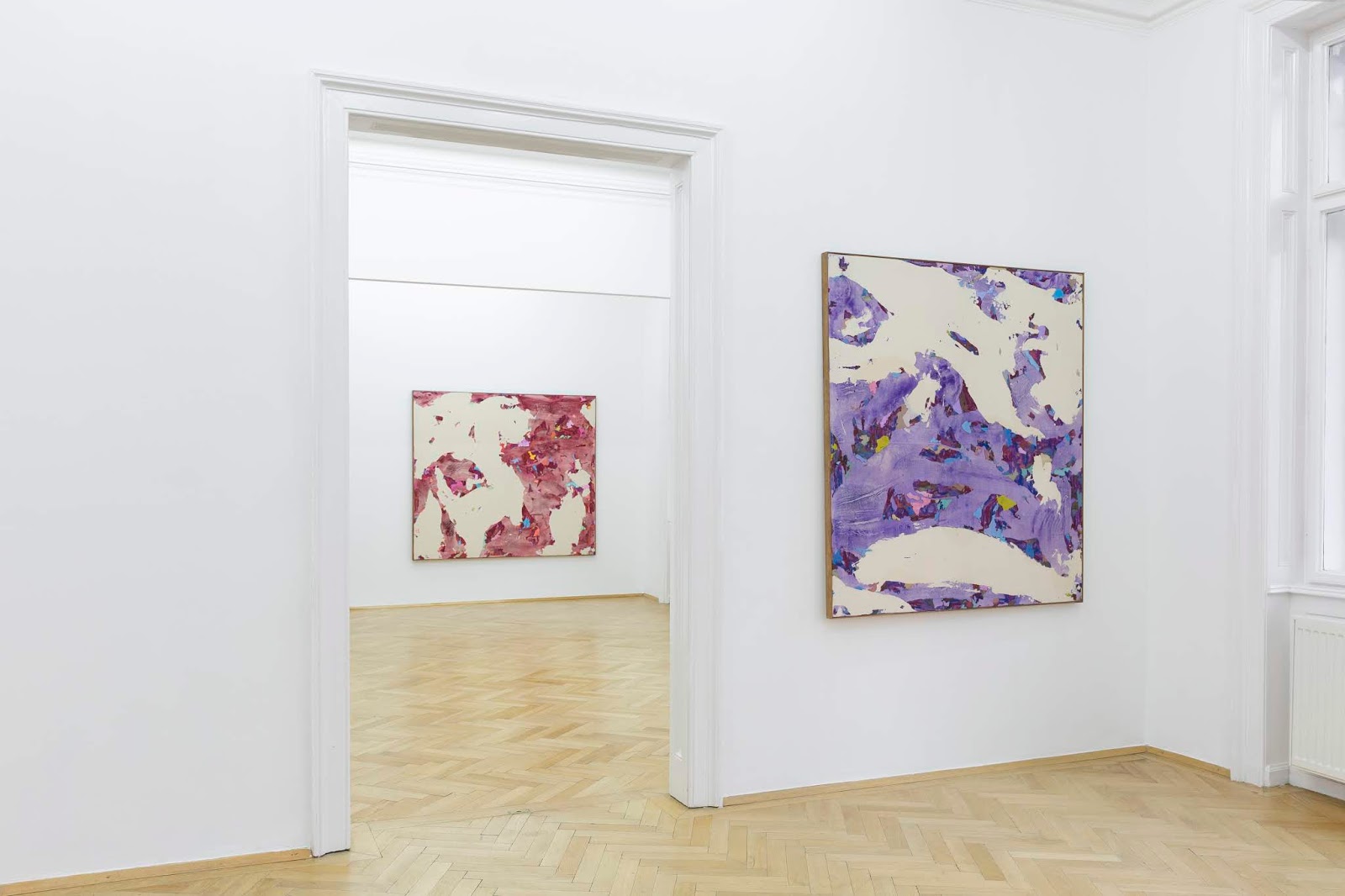 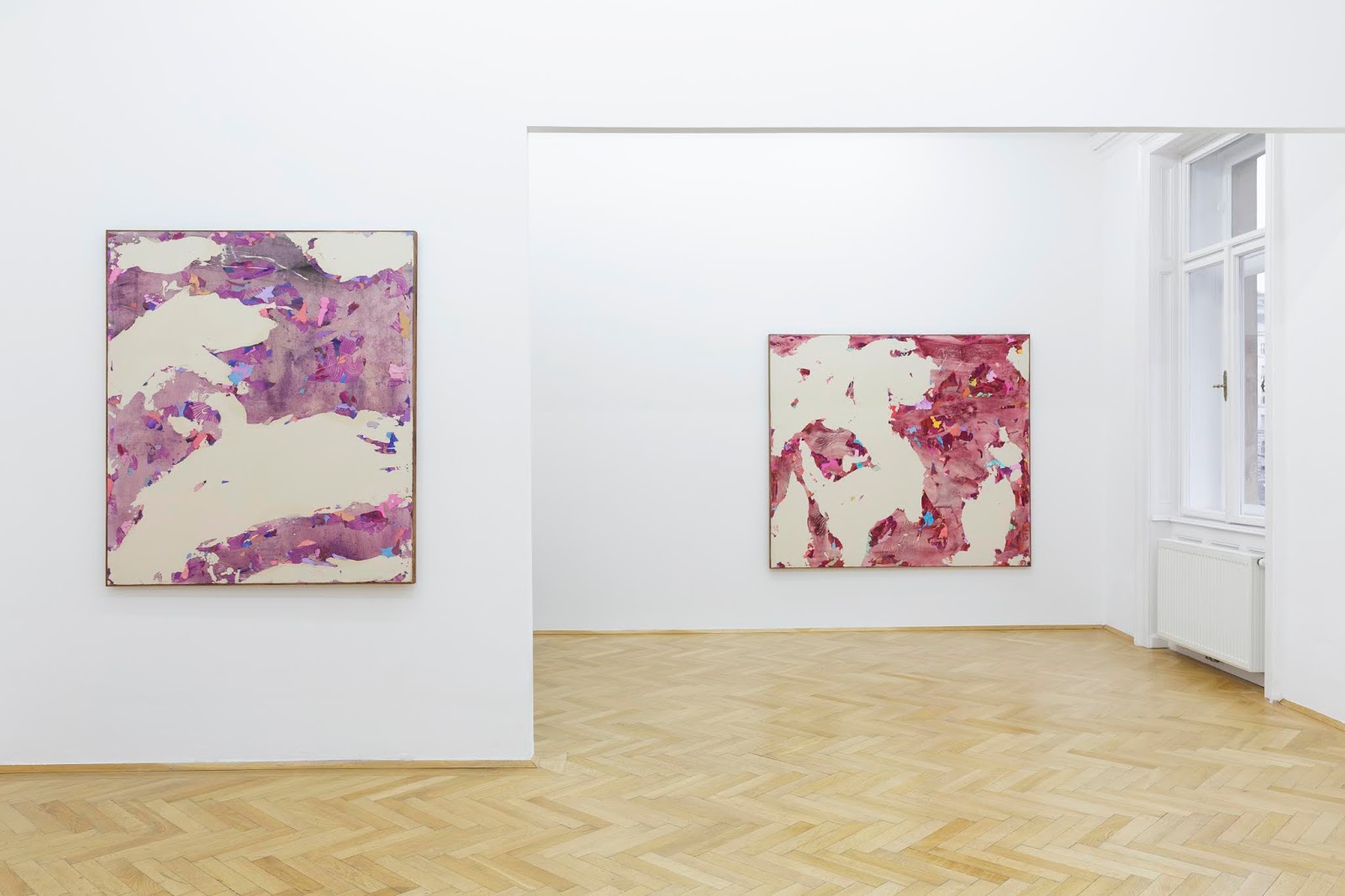 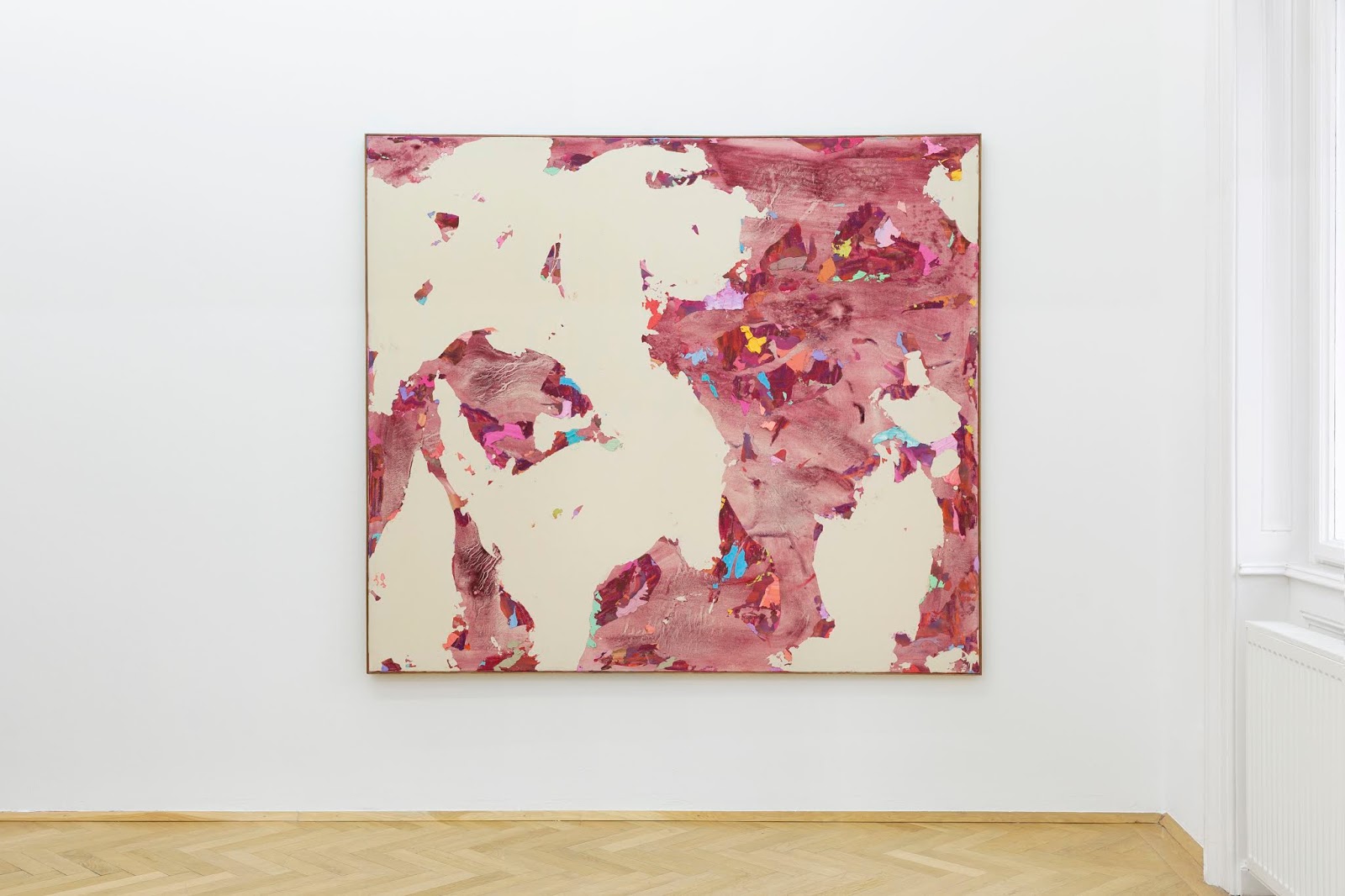 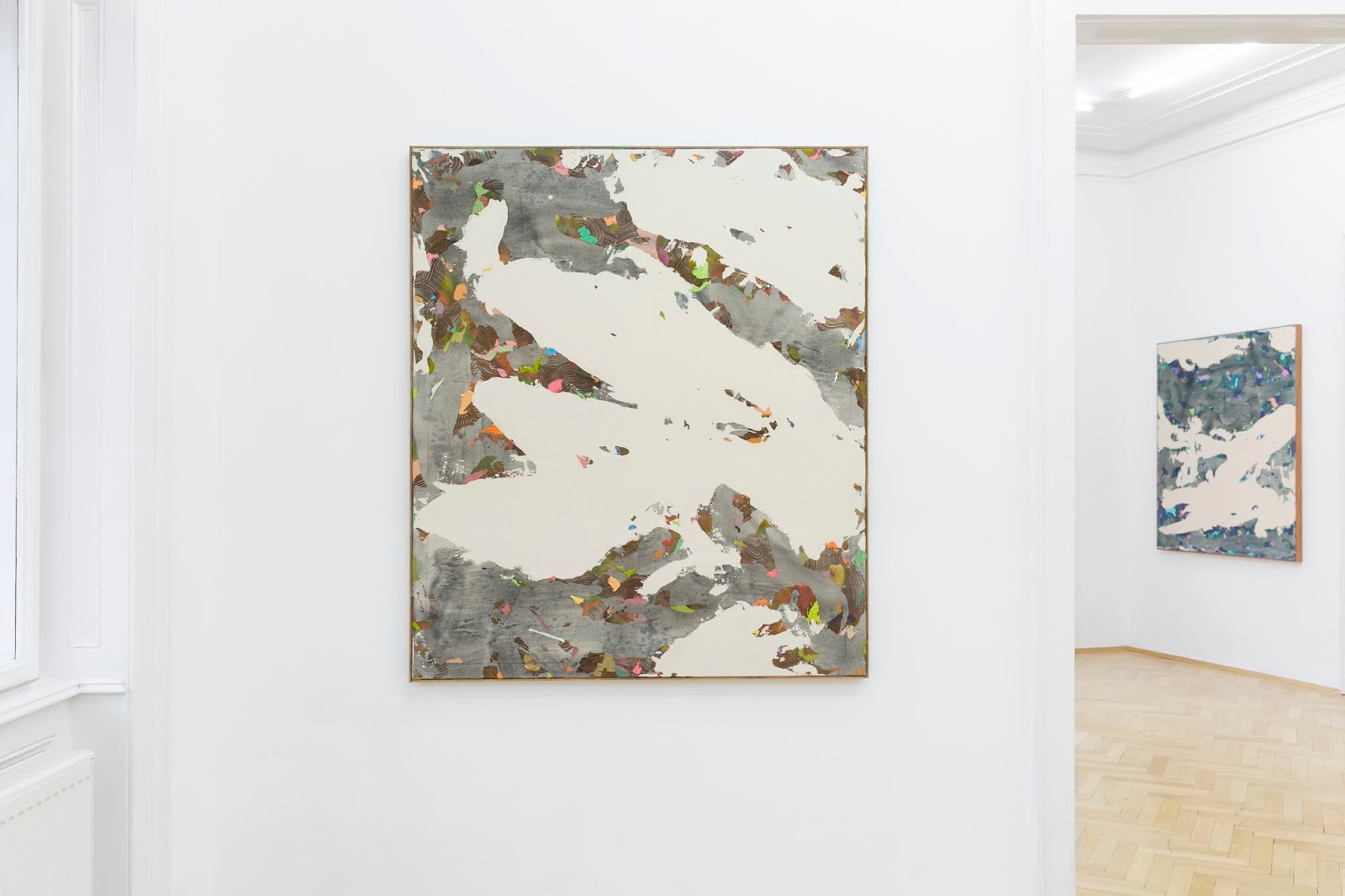 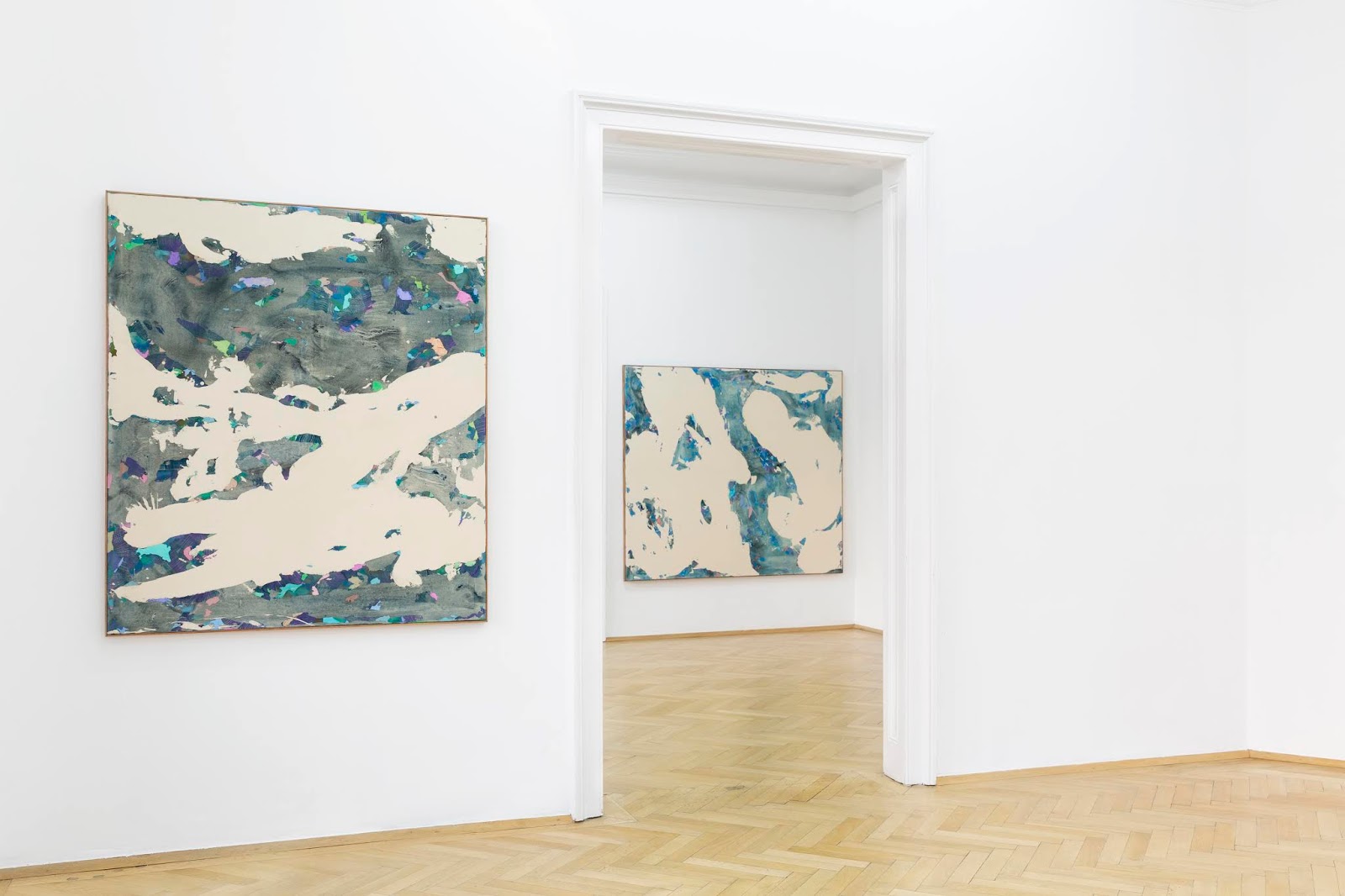 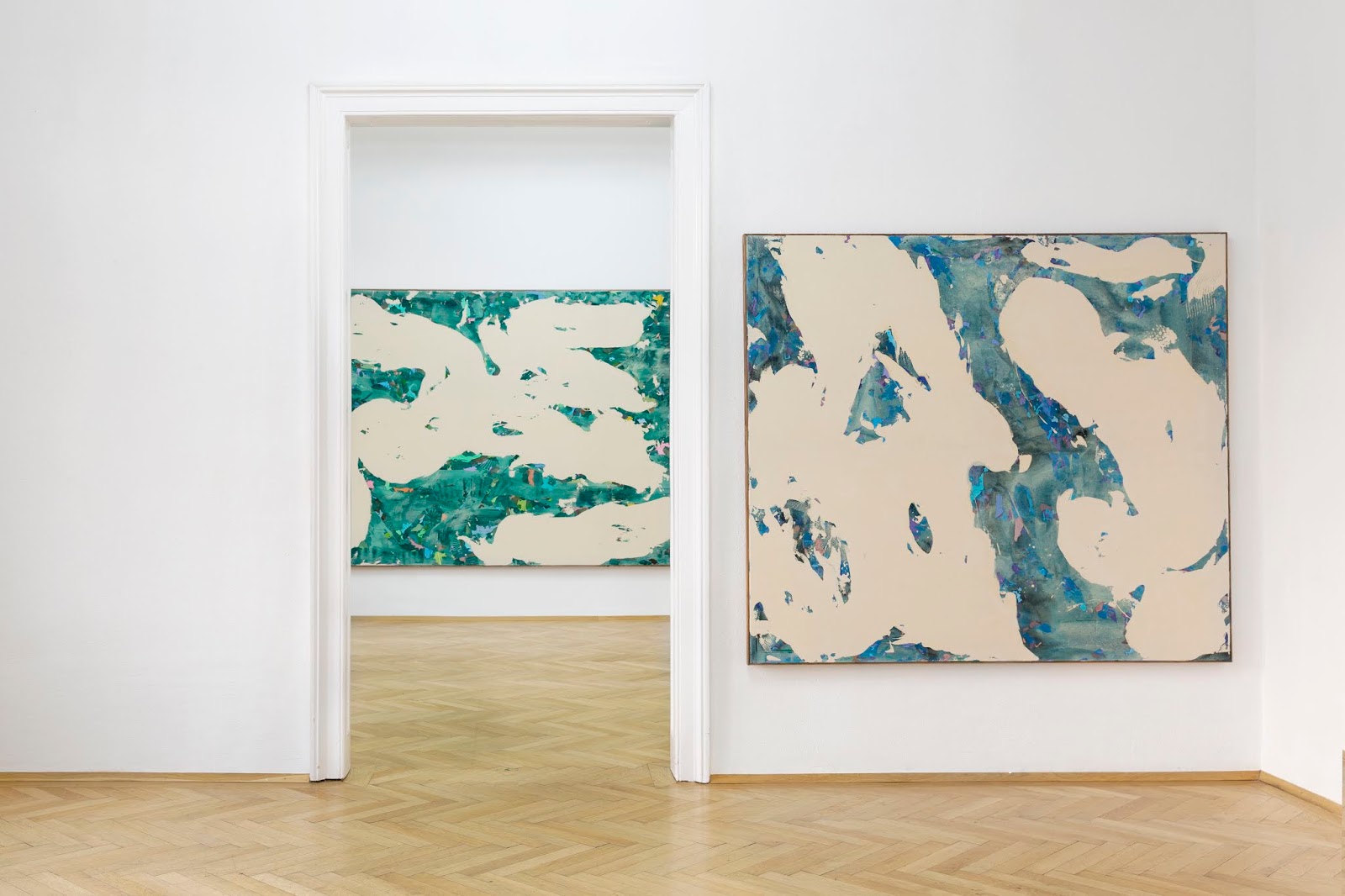 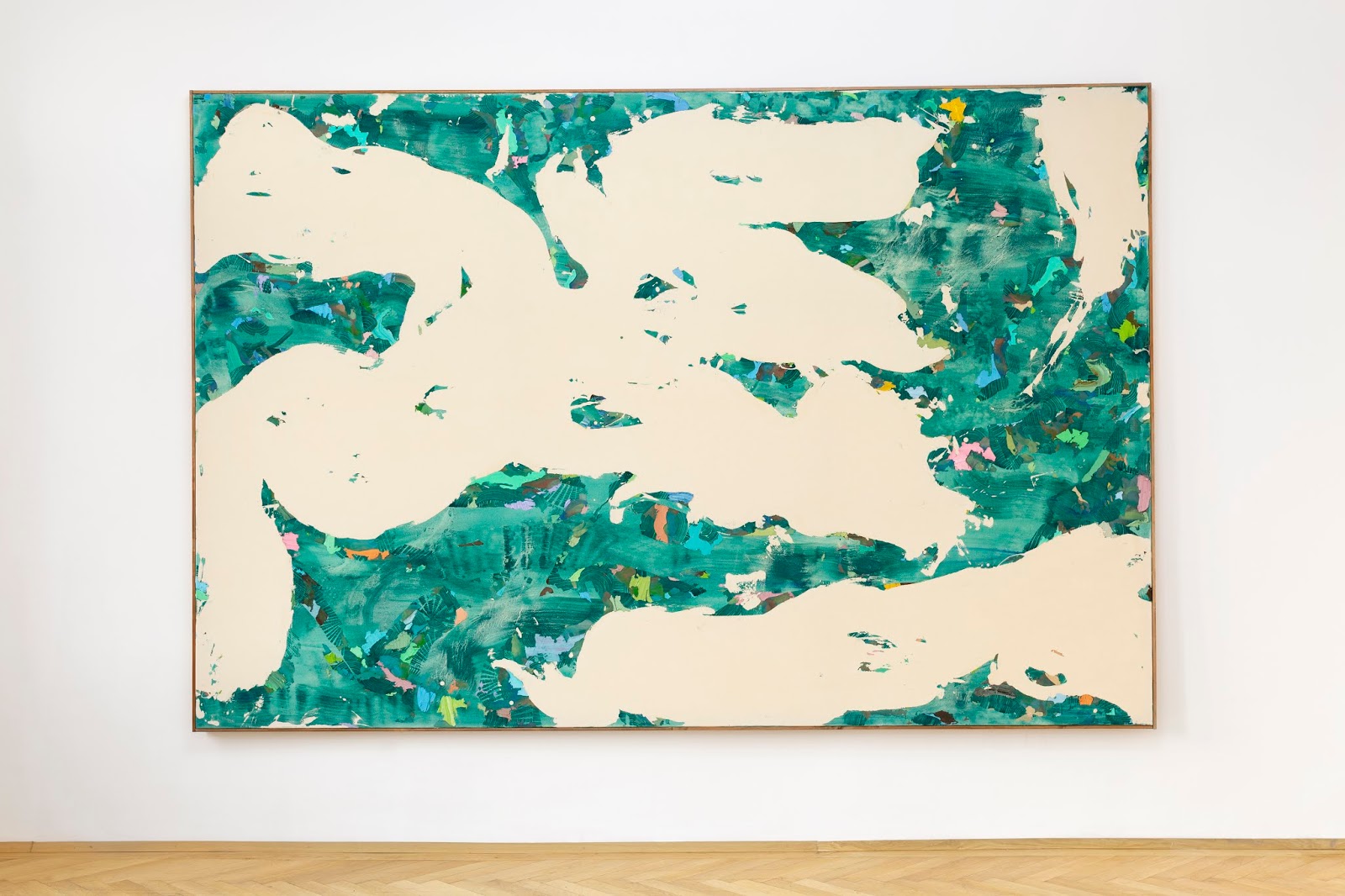 
Yorgos Stamkopoulos’s paintings are more than paintings. They are shadow sculptures—the remains of what was. Each work is the final trace of a thick ‘skin’ built up with casting material on canvas, over which layers of colour and paint are applied before the final dermis is peeled off, and the subtle imprint beneath is revealed. The fleshy clumps that we don’t see are visceral, messy, and tangible; they have absorbed the intensity of an abstract and expressive approach that is instinctive, physical, and spontaneous. The intimacy of each painting’s making might explain why their membranes are not shown alongside Stamkopoulos’s finished canvases—they are the residues of a personal and corporal encounter between one artist and the void; the record of a private conversation.

When these skins are peeled off, the canvases transform; as does the artist’s relationship with their surfaces. From an act of unencumbered application, the artist now begins a considered subtraction, in which his compositions are delicately undone—there is no telling how the casting material might behave when it is pulled off, or what will remain once the process is complete. A balancing act is caught in each work: an equilibrium that feels at once intensely deliberated and measurably unhinged. Intersections of colour, stroke, and line are tempered by carefully revealed swathes of raw canvas that glow like luminous intervals,[i] with the additive and subtractive levelled as equal partners on the image plane. Here, a multitude of dynamics—between depth and surface, time and space, subject and object—commingle and interact in what could only be described as a dance. Such elegant dialectics bring to mind Vilém Flusser’s description of technical images. Even if Stamkopoulos’s pictures are not made using technoglogical devices, the observer is still confronted with “mosaics assembled from particles” rather than surfaces; fields of matter “emerging into a post-historical, dimensionless state.”[ii]

It is fitting that Stamkopoulos refers to the philosopher José Ortega y Gasset’s 1925 essay, “The Dehumanization of Art,” when discussing his work. Ortega identifies a “new style” of art that aspires to “scrupulous realization,” in which artists do not take ideas to be “synonymous with reality,” but consider them “for what they are”—“mere subjective patterns” to make live, lean, angular, pure and transparent.[iii] To borrow Peter Halley’s reading of Ortega, “the Modernist artist reverses the ‘spontaneous’ movement from world to mind [iv]—an engagement with the unruly universe of ideas that recalls what Stamkopoulos captures in a frame, in which—to paraphrase Ortega—the subjective is objectified and the imminent is worldified.[v] Each canvas is an object testimony of a subjective journey into that known and unknown space of pure and ineffable possibility, which art has so often sought out. They are portals to this potent abyss: both a way in, and a way out.