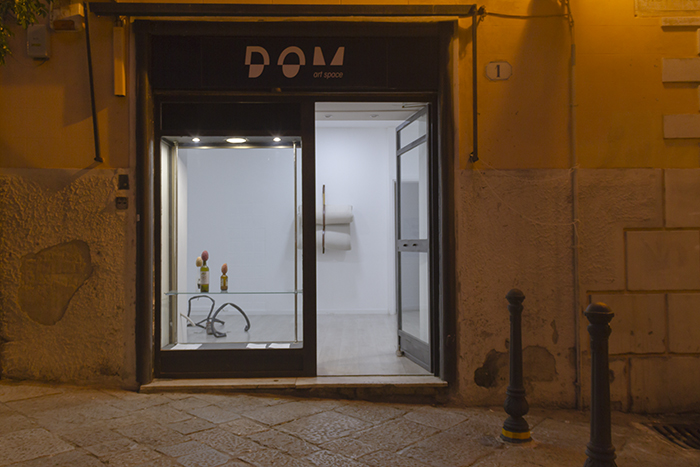 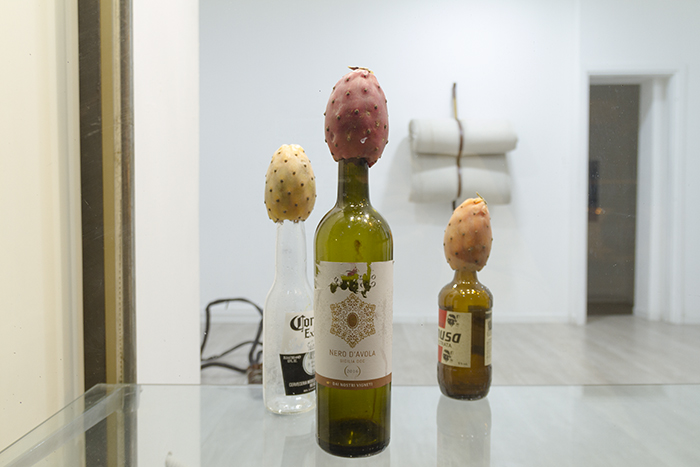 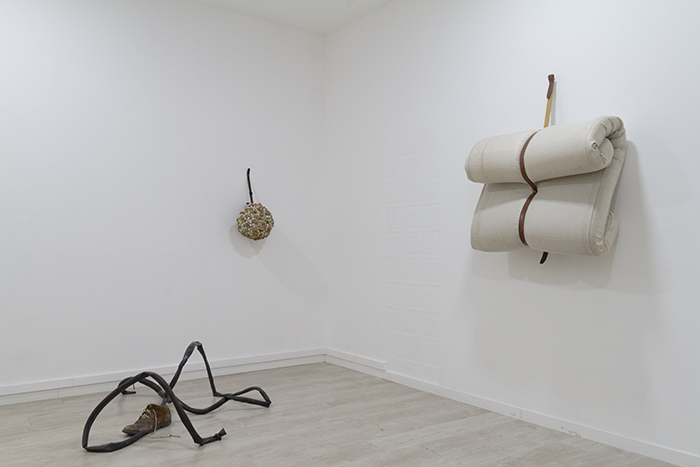 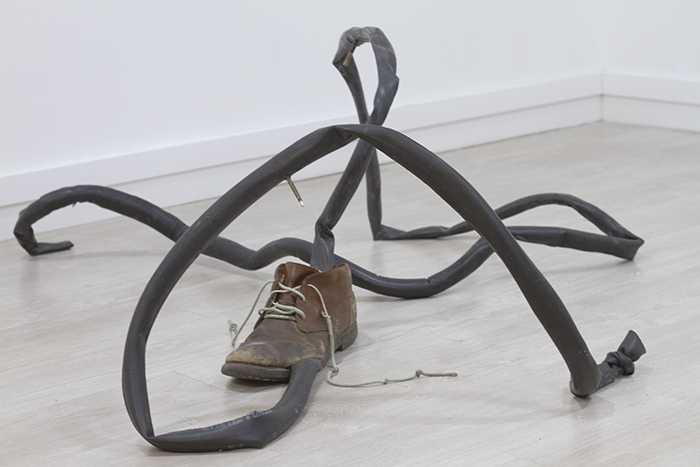 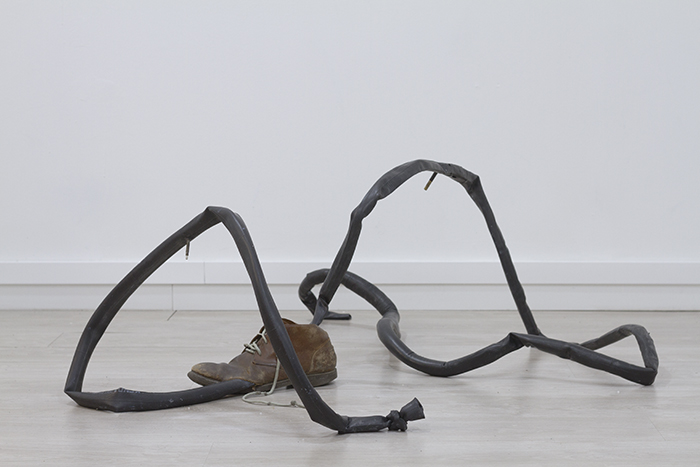 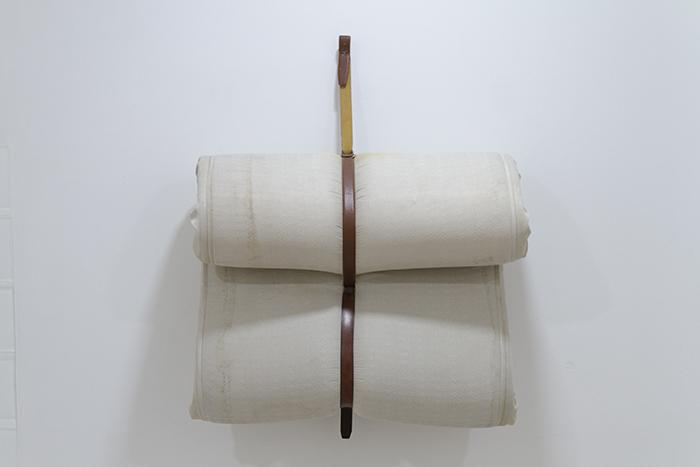 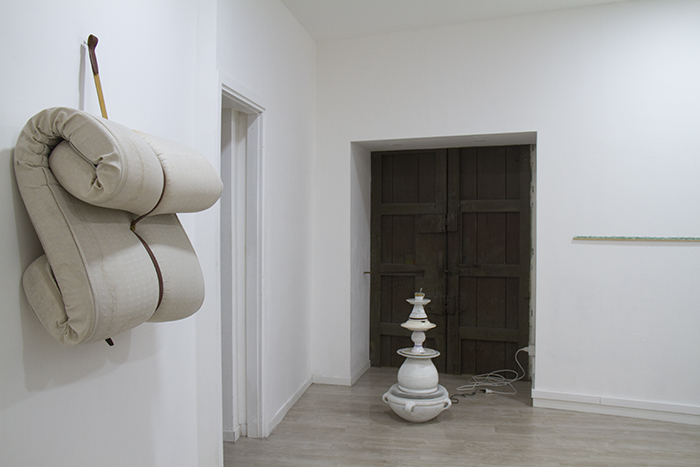 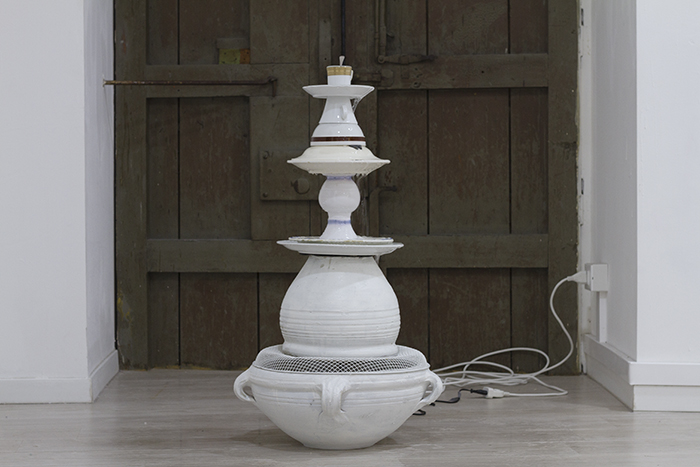 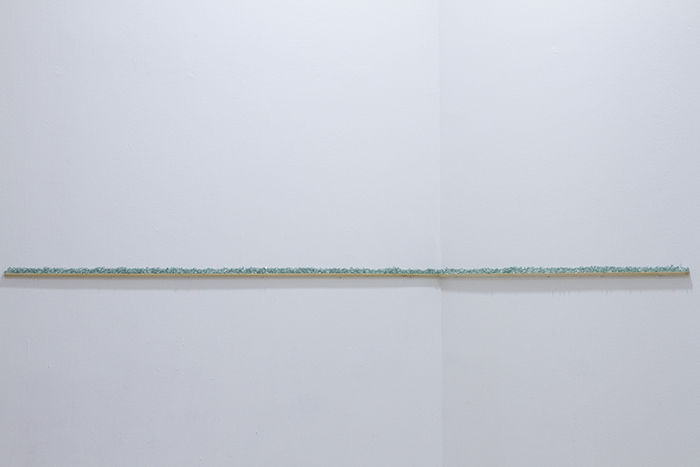 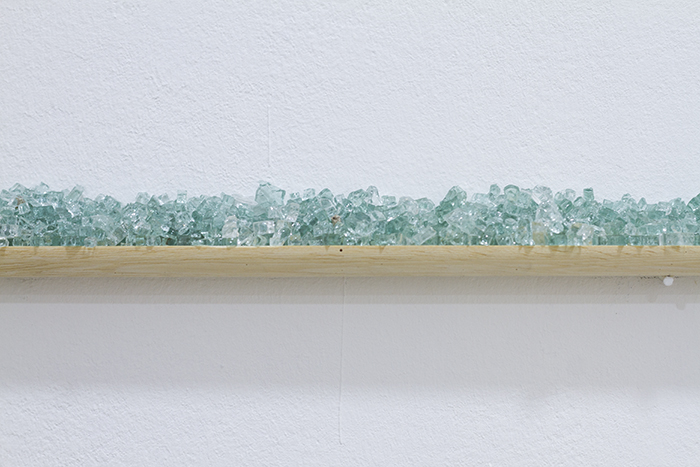 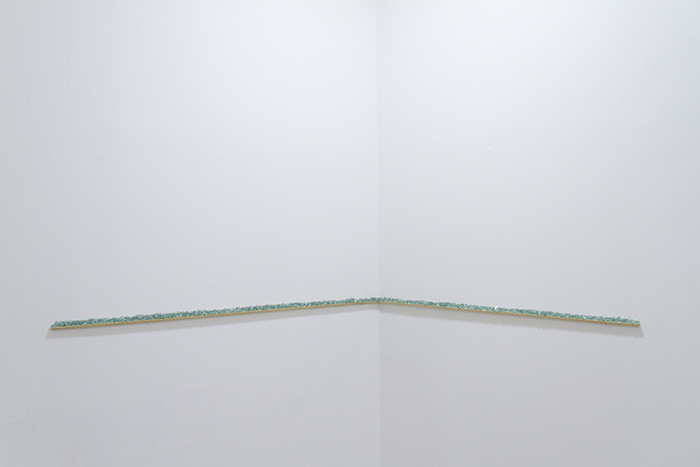 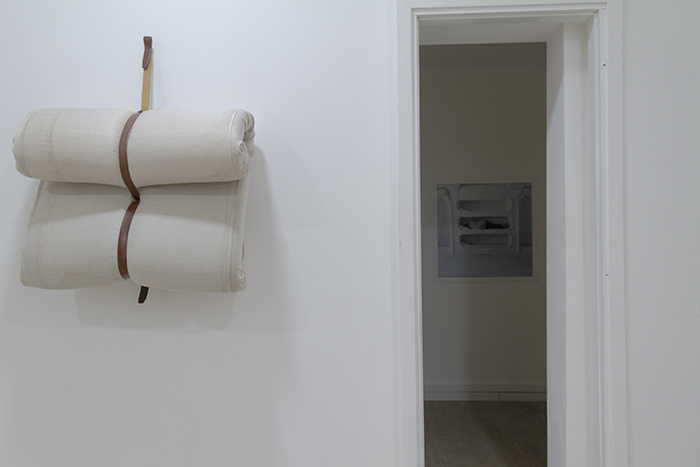 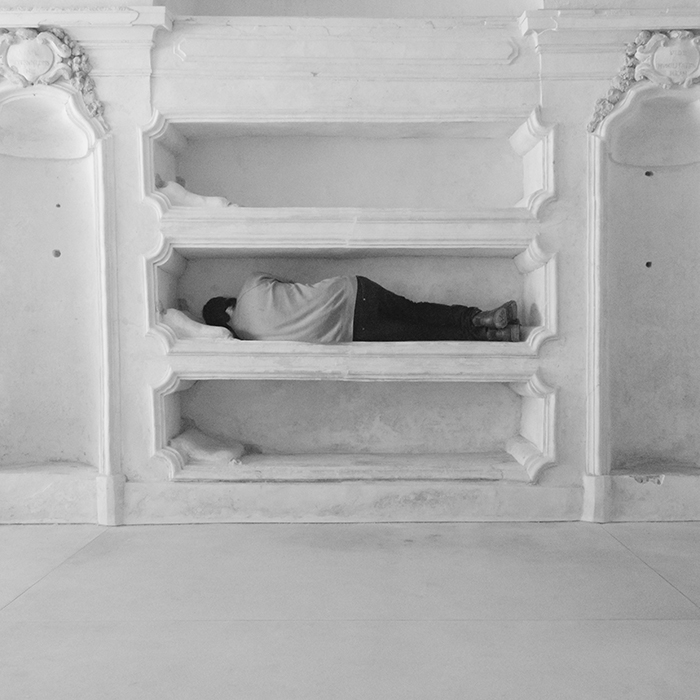 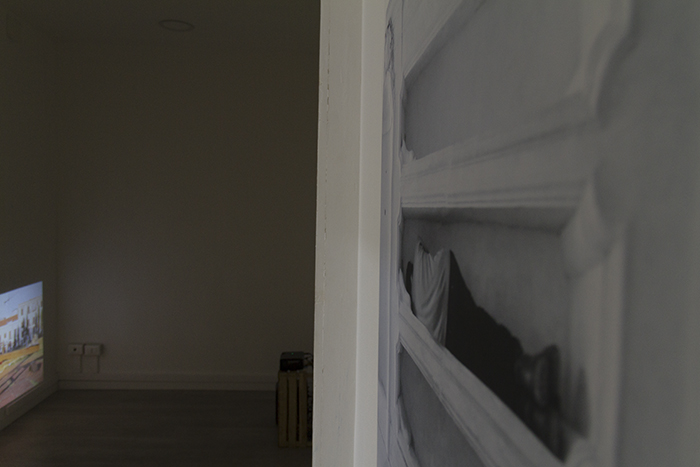 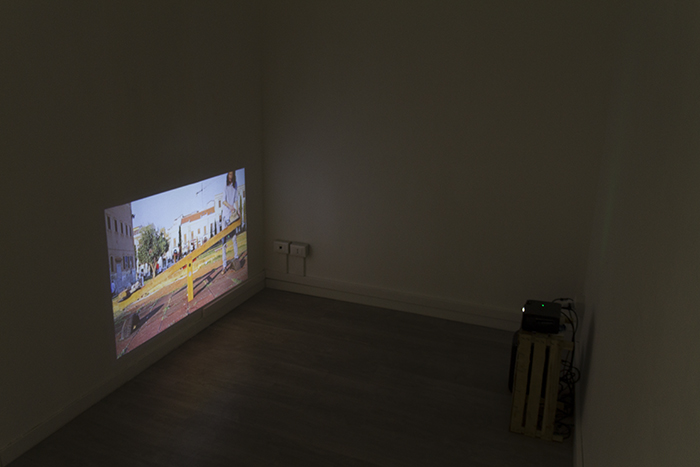 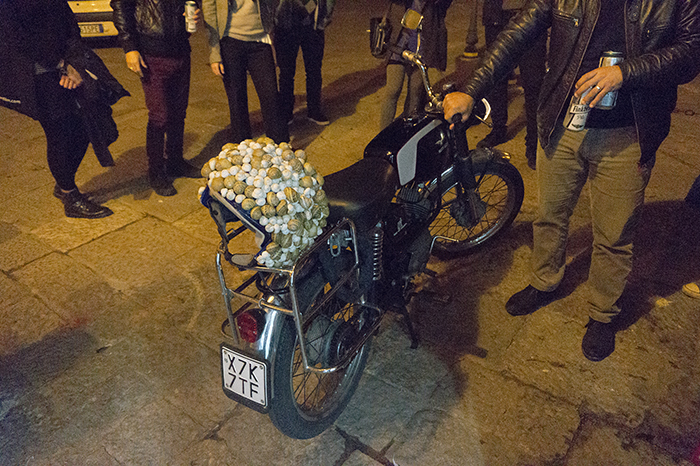 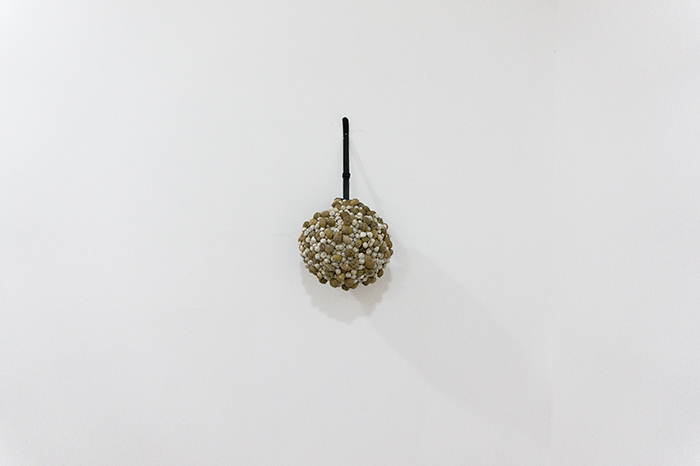 The pieces that Calixto Ramírez presents for DOM art space comes from his explorations around the city. It is a homage to Palermo, and, at the same time it is a way of thanking the city that in a short time has given so much. The sea, the night, the crime, the architectural greatness, the homeless, the immigrants, the life lived constantly within public spaces, the precariousness, and the willingness to dialogue - all are present in this body of work, concluding 211 Palermitan days and nights.

Calixto’s practice focuses on generating new poetics from the space, objects, and actions where he’s at the moment. Video, photography, sculpture and performance, are the mediums used by the artist to share his rapport with the Sicilian capital. With his characteristic classic, formal, poetic-political language and sometimes with certain sense of humor, Calixto transforms reality and proposes another.

The materials used by Calixto carry a past. Broken glass, a trace of delinquency, form a line that reminds us of the horizon of the sea, making it clear that within the calm and contemplation, there is also violence. An old mattress is transformed into a body in tension, a twisted dream for those who cannot rest. Bottles from different regions supporting prickly pears question the provenence of identity and invites us to laugh at nationalism from the absurd conversations that a plant can provoke. Objects that have lost their value at Ballarò market, take on a new sense of purpose transforming into the Fontana Precaria. Bicycle inner tubes, Via Divisi’s daily waste, become a single, unified line that breaks the circular idea of the wheel, paying tribute to the street where we have lived.

On the performative work or actions conceived for the camera frame, Calixto presents three pieces. Giustizia (Justice), a video with a sculptural language that plays with the idea of power, using a seesaw as a balance. Anni Babbaluce, a performative, temporal sculpture that exemplifies the clash between the north and the south, speed apparently without movement. And finally, Cripta (Crypt), an image that captures an instant, almost an act of vandalism, typical of the photographic work of Calixto - the body is inserted in an architectural space celebrating life through the action of doing it.

The strength and beauty of Calixto’s pieces come from the simplicity of an idea, from his spontaneous way of creating metaphors about life from his actions. And so, starting from something as elemental as a line, the artist shows us from a landscape to a struggle to find balance, the verticality of a fountain that barely holds itself up or the leather strap that binds Madrazzo, recalling the ornamental decoration of a Ionic capital. The same line marks the boundary of this island, which, even without seeing it, we know its there.