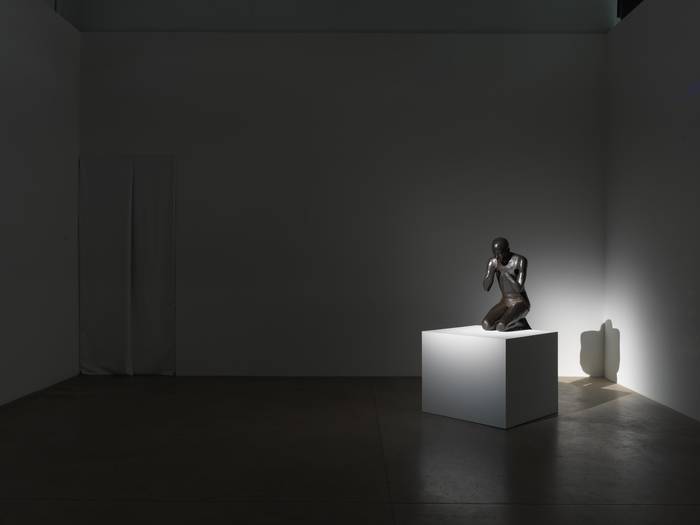 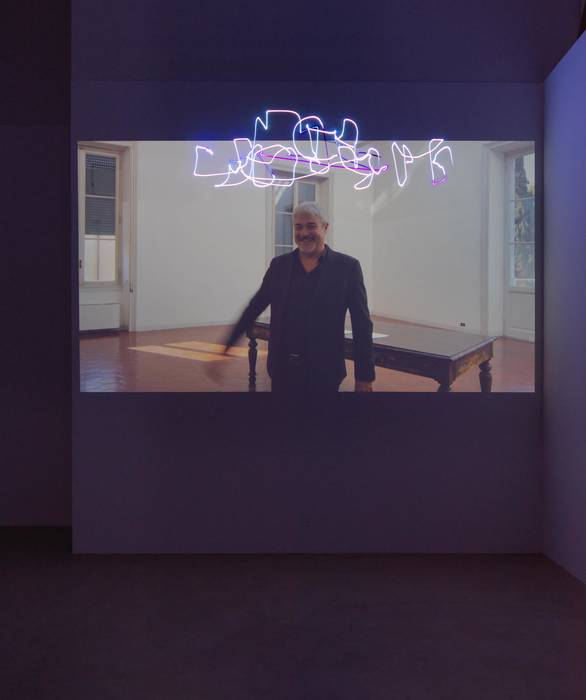 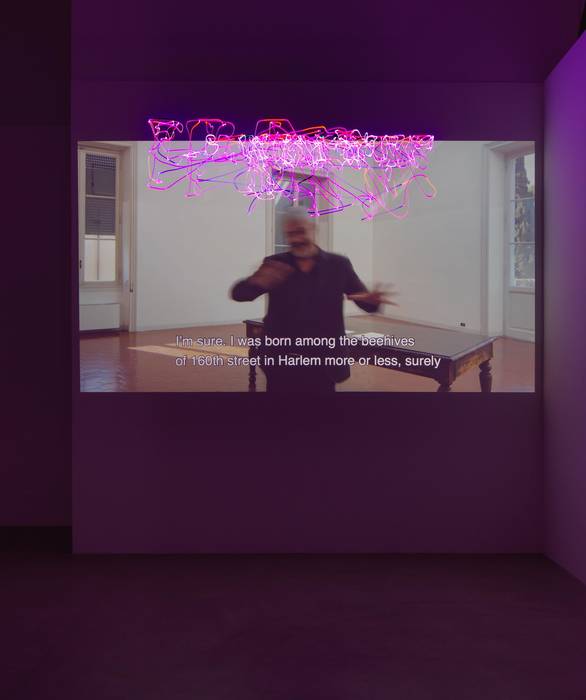 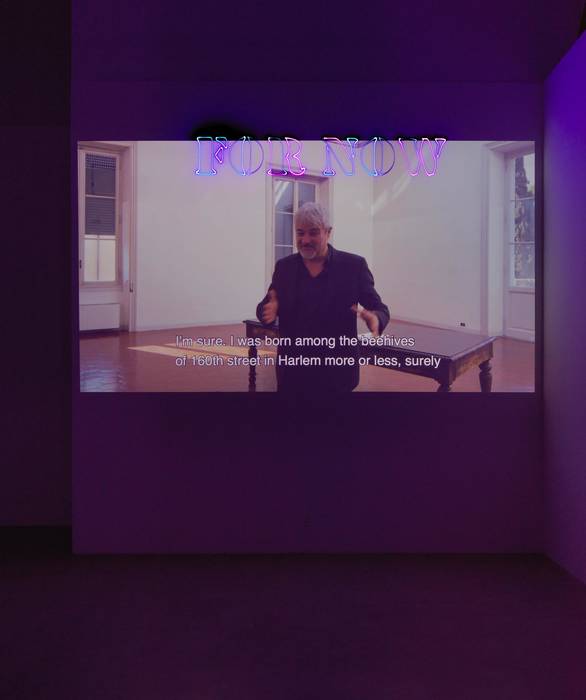 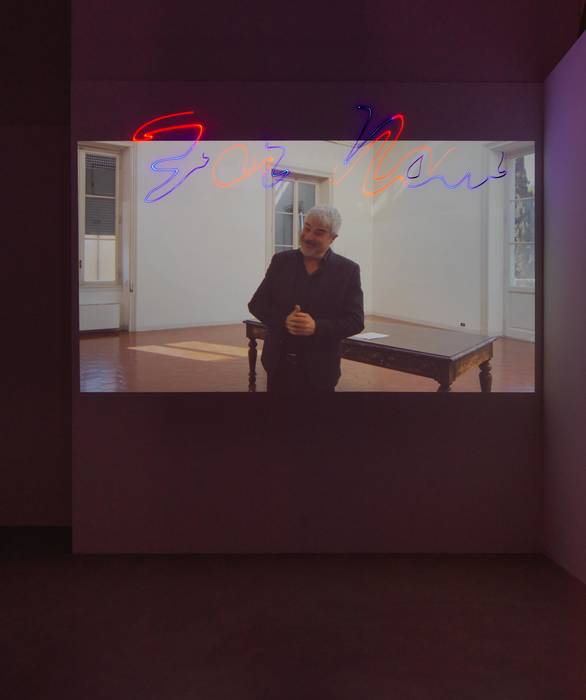 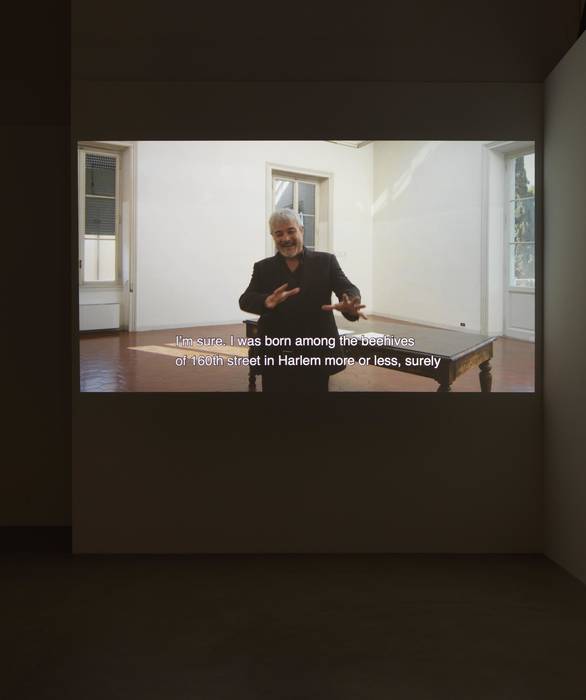 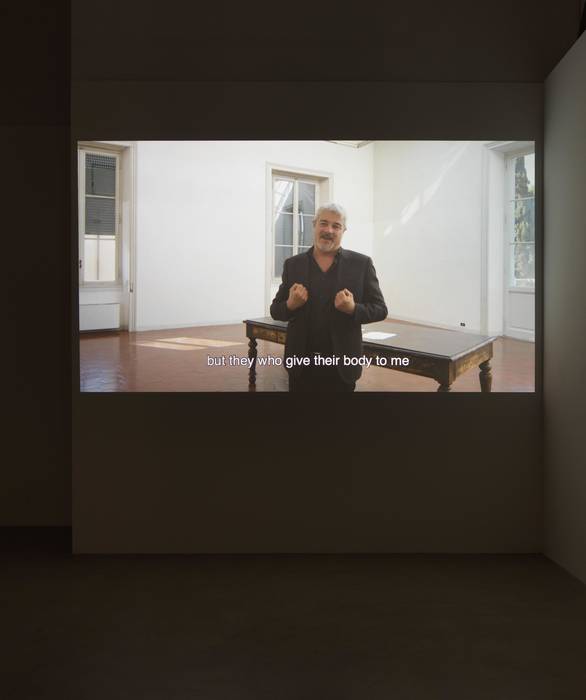 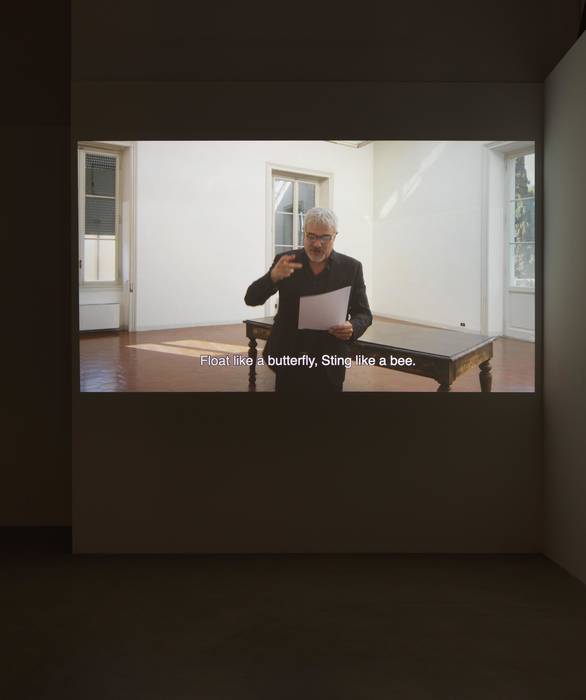 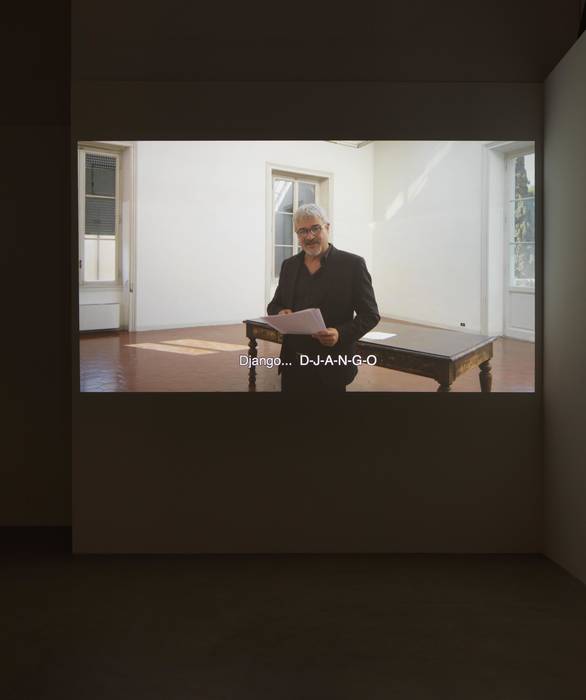 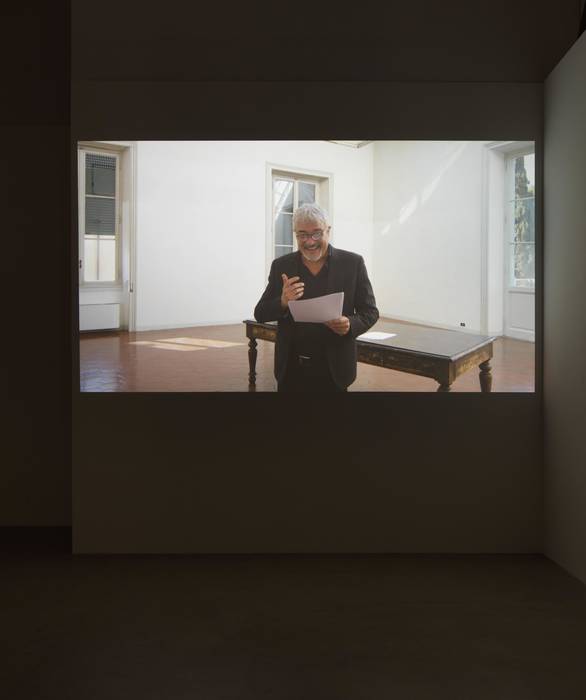 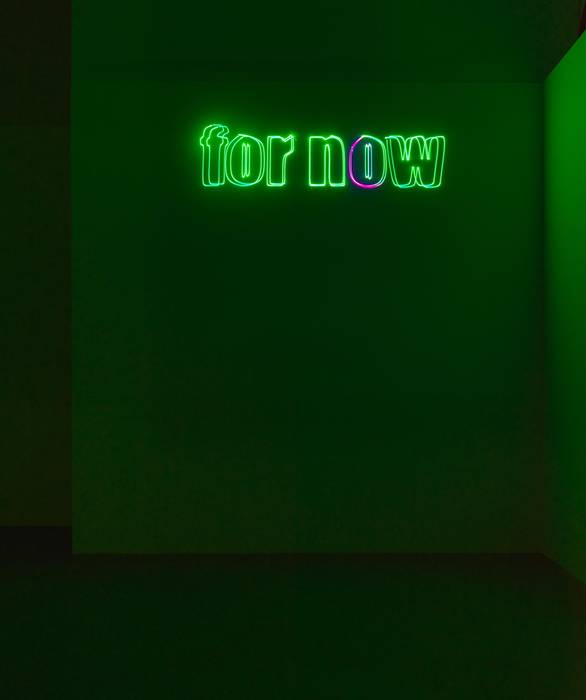 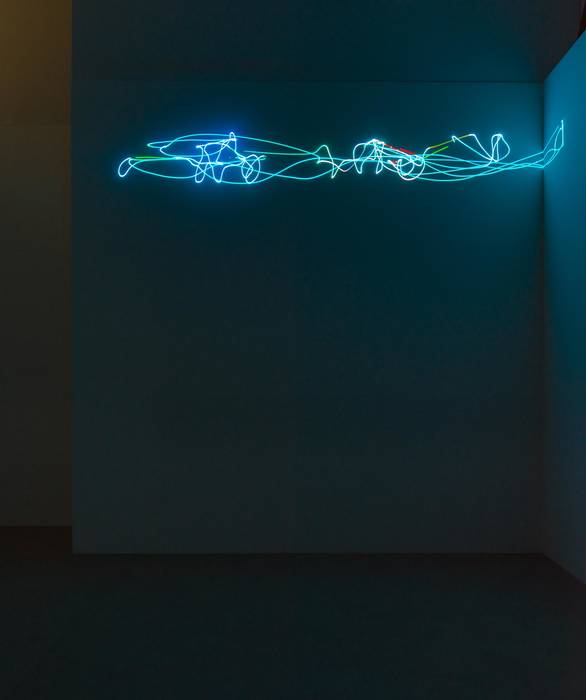 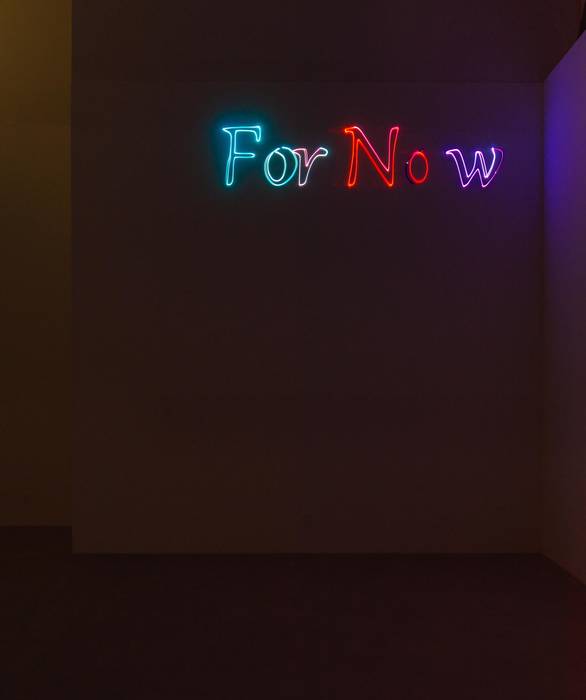 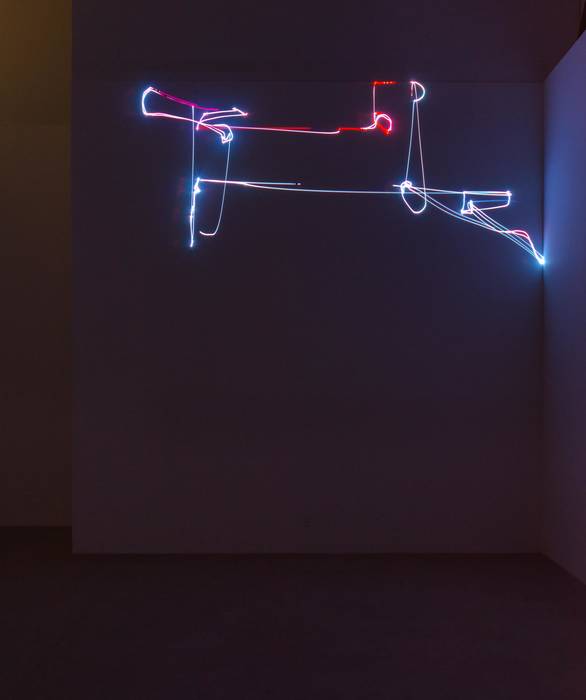 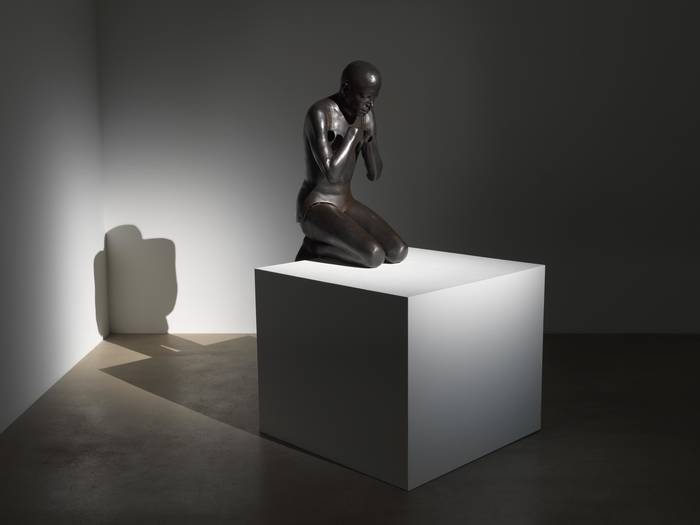 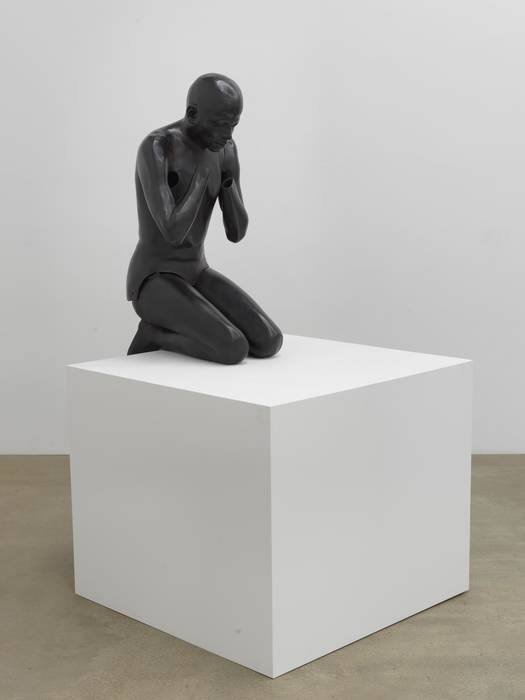 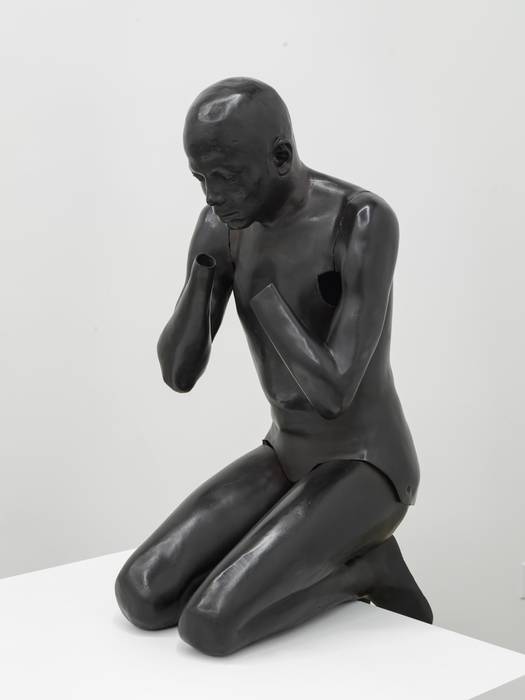 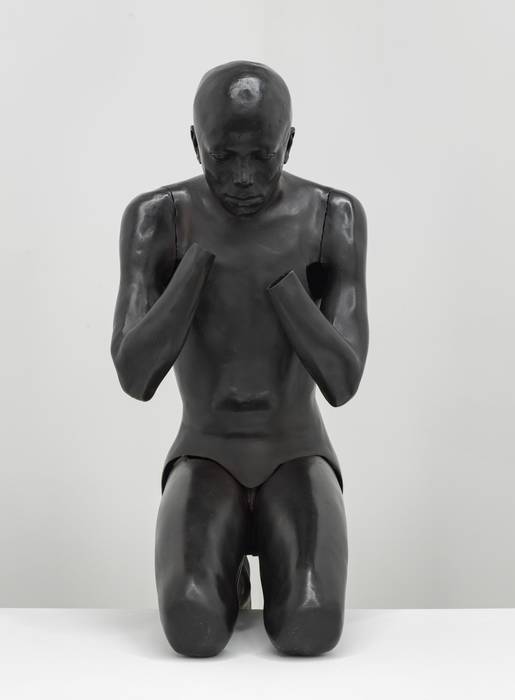 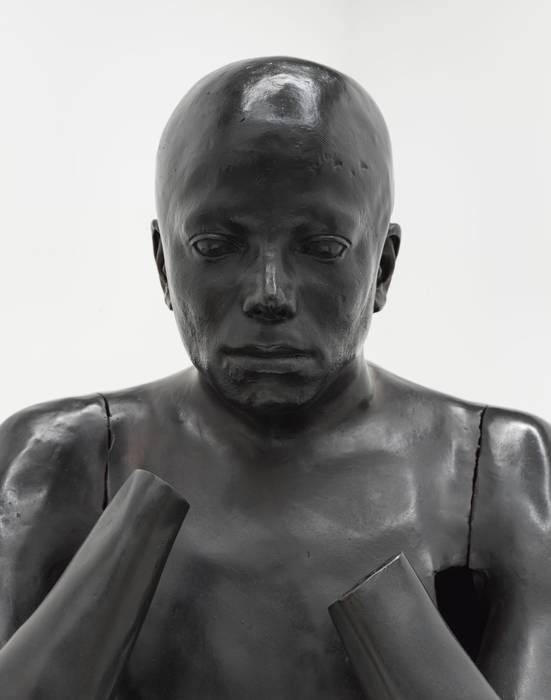 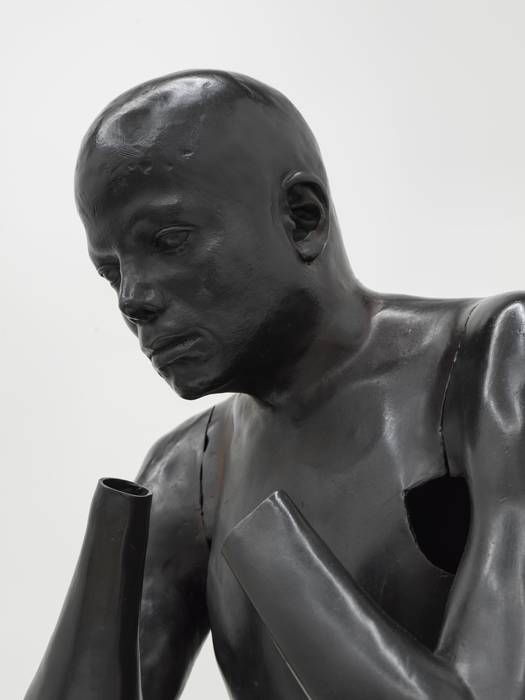 At the center of the dimmed gallery floor, one encounters the rangy frame of world-class entertainer, Michael Jackson in the sculpture Michael in Black (2018). Cast in bronze from molds that were formed by applying plaster directly to Jackson’s skin in 1987, it is hard to determine whether or not Jackson’s kneeling position appears pious or merely pensive. Such is the ambiguity that swirls about monuments as one frozen moment is tasked with bearing the weight of a lifetime.

With his limbs drawn close, one can also imagine Jackson waiting on a dark stage, his torso tightly coiled in the seconds before his body will be soaked in spotlight and he will spring into step after flawless step with an alacrity equaled only by that of his friend, Fred Astaire. For now, Jackson remains still – paused permanently within the long series of permutations that characterized the entertainer’s ever-evolving persona.
On the opposite side of the room, the words “for now” materialize, shift, expand and contract. Recalling an earlier moment of technical sophistication in live concert special effects, For Now (2018) morphs through various fonts, colors, and sounds; carving out space through analog laser light, only to vanish and reappear repeatedly. The phrase becomes a spectacle without end, dynamically suspended in eternal return.

The only cohesive sound in the room belongs to acclaimed Italian voice actor, Pino Insegno. Between his animated expressions, Insegno offers an account for why he is sought after to stand in for the voices of Black American actors who star in exported Hollywood films. Within this particular imaginary, in which the temporary act of inhabiting another body takes the form of speaking through its image, we are reminded that every story is colored by its telling.

The artist and the gallery offer special thanks to Laserist Zak Forrest who helped realize For Now (2018).

All images courtesy of the artist and Koenig & Clinton, Brooklyn.