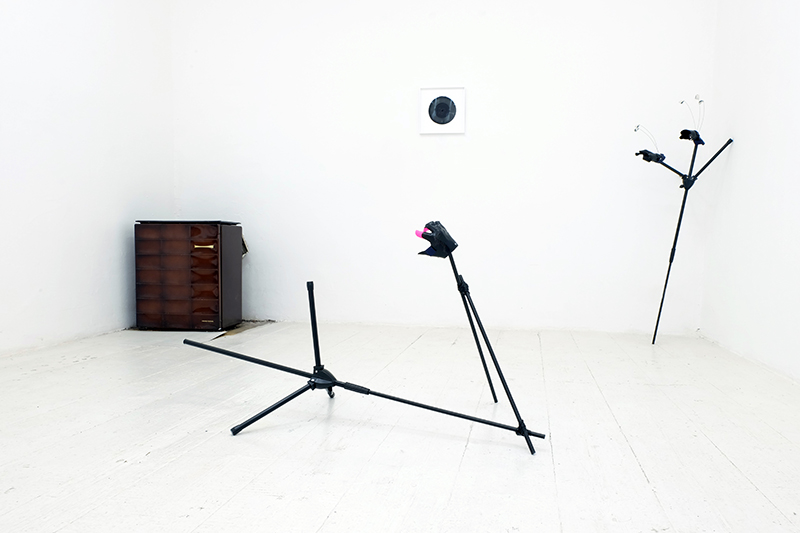 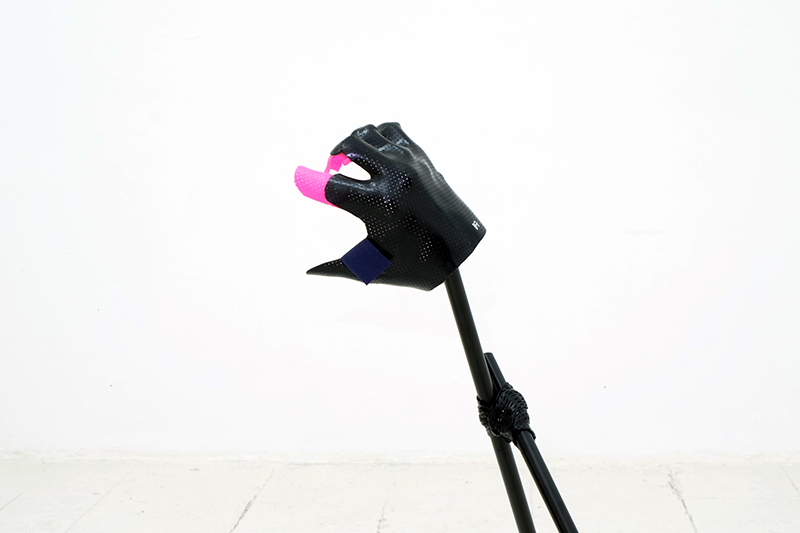 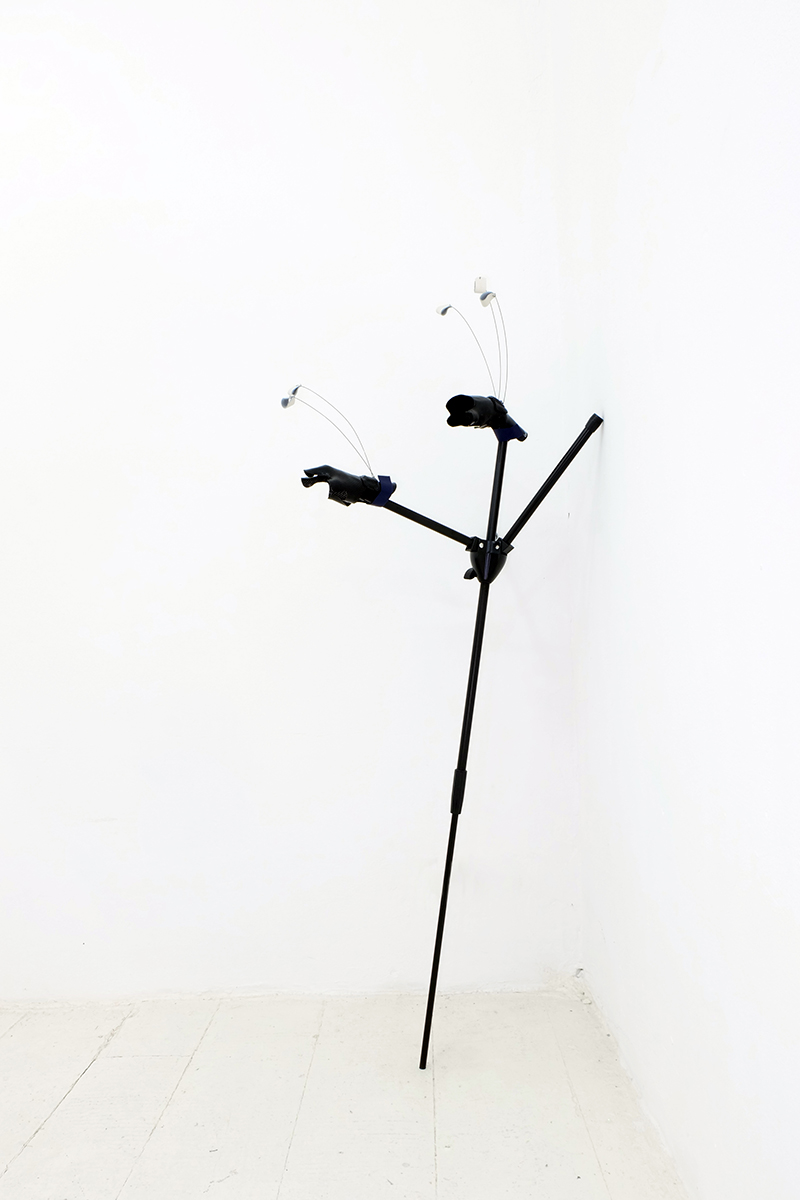 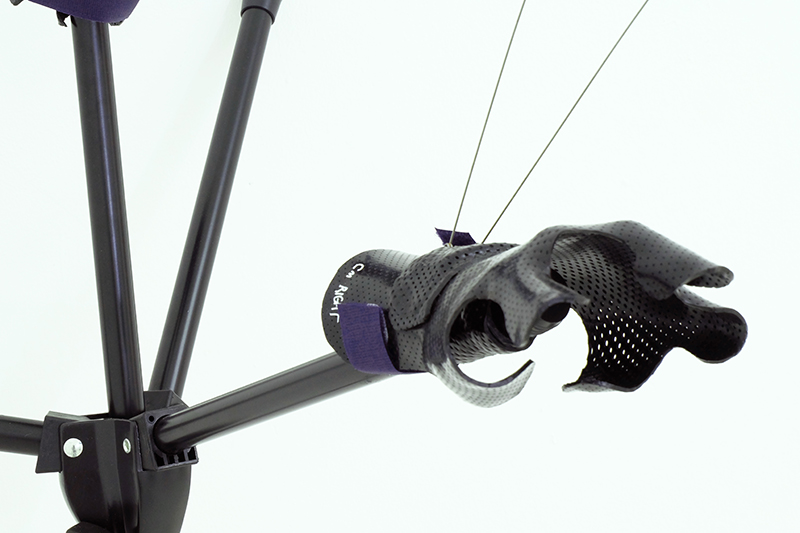 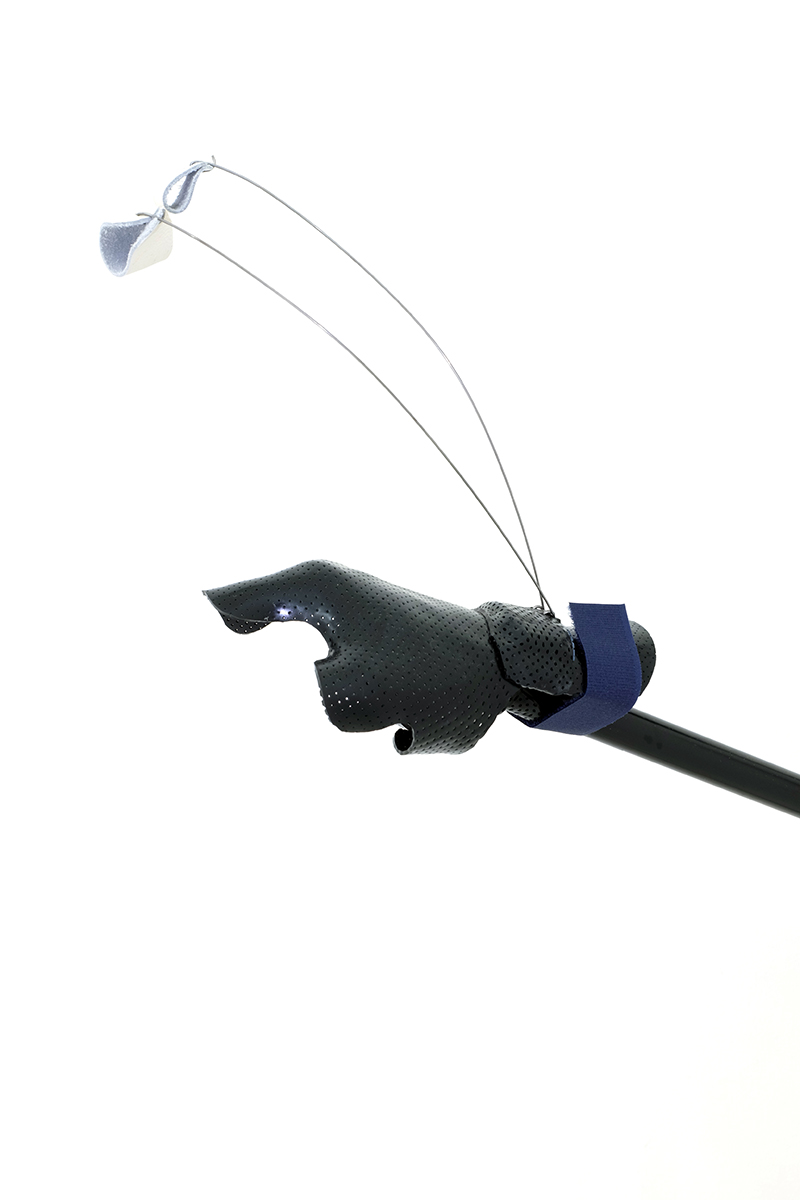 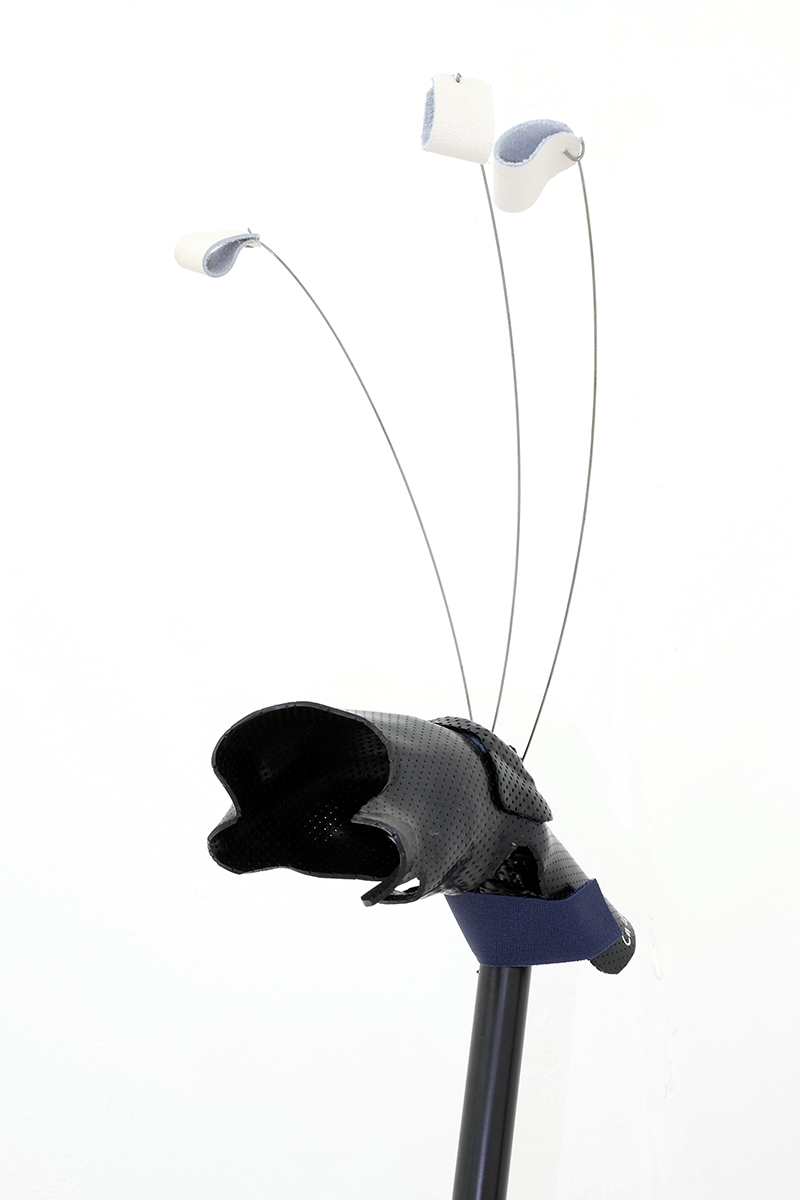 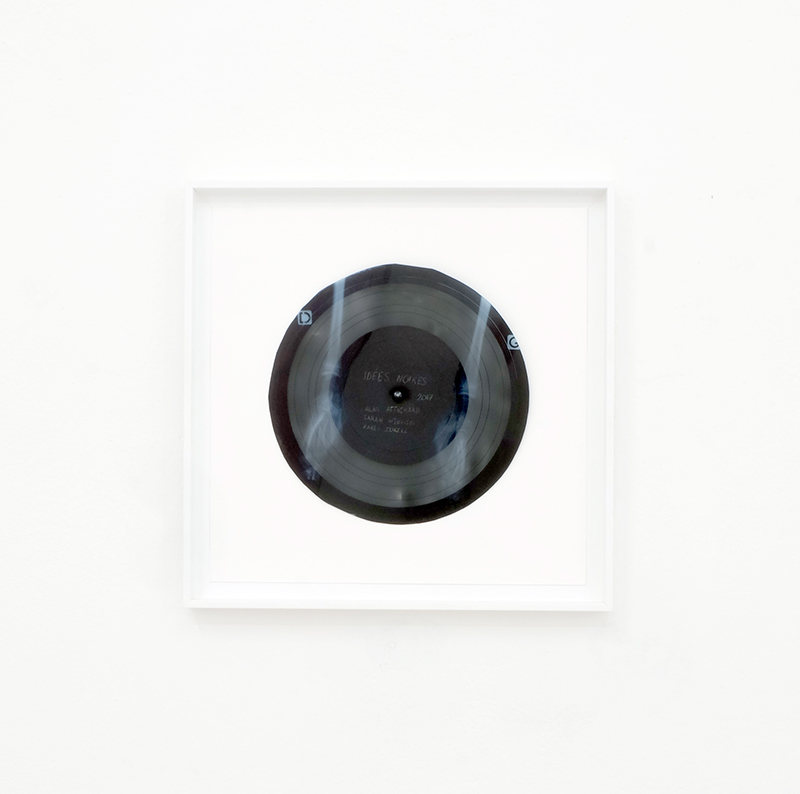 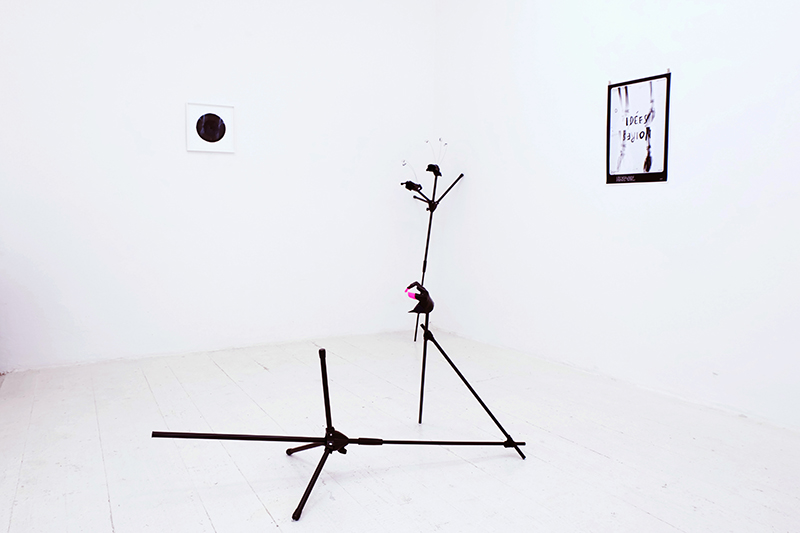 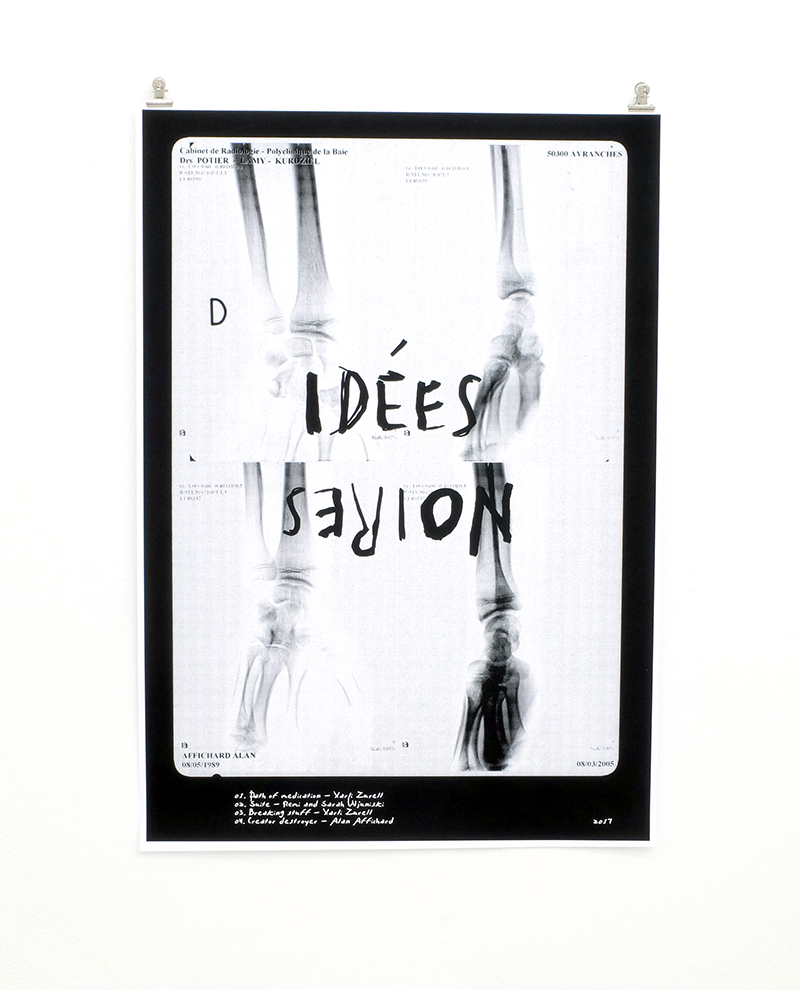 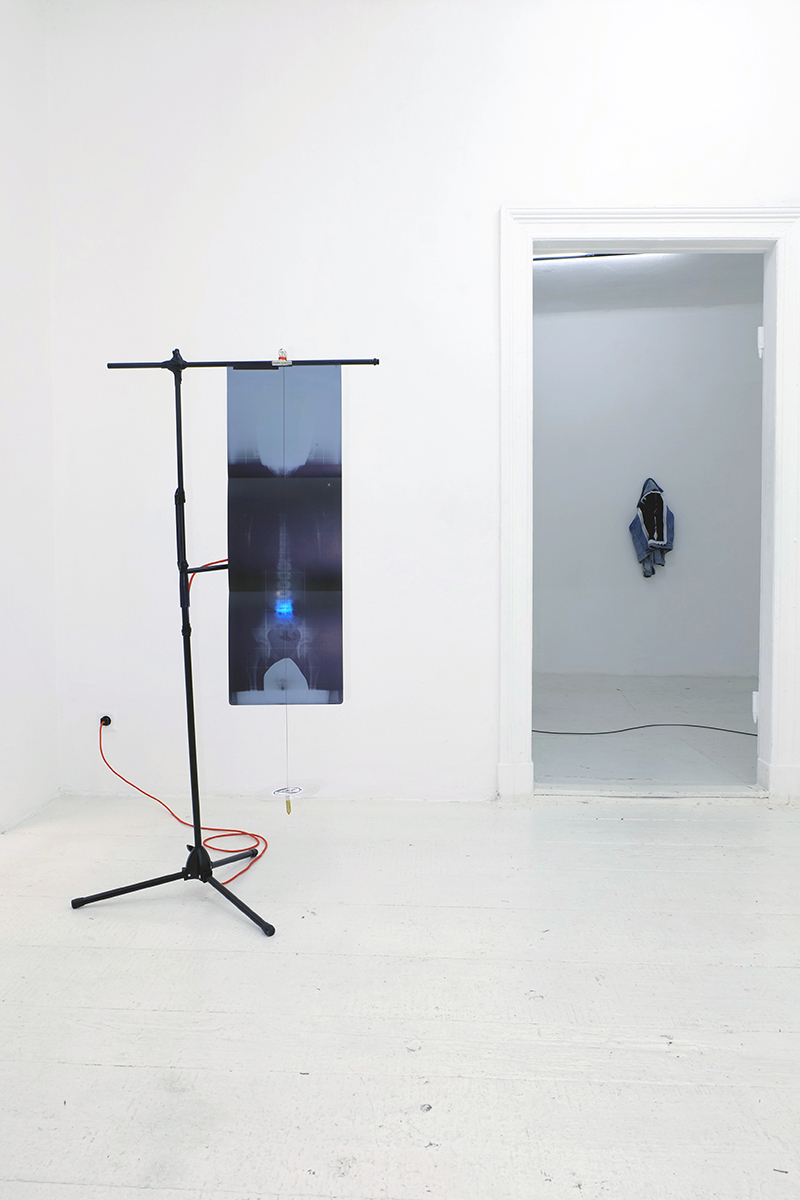 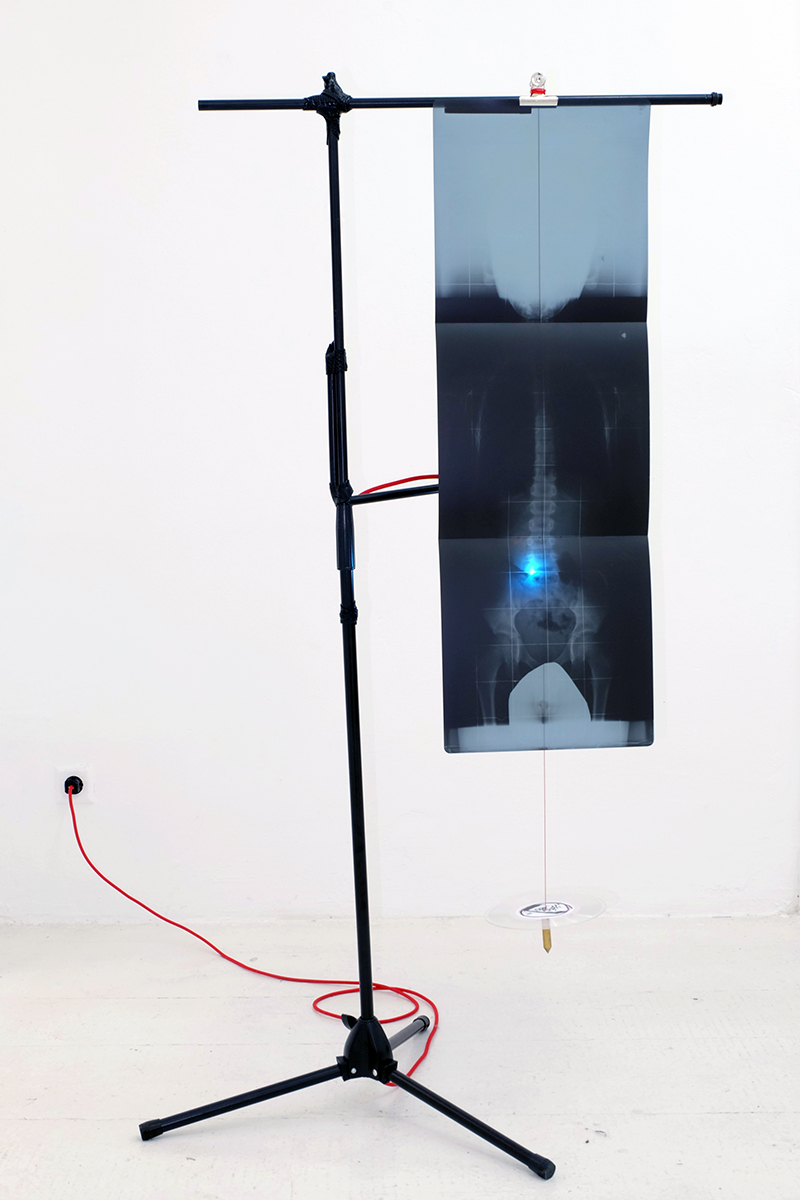 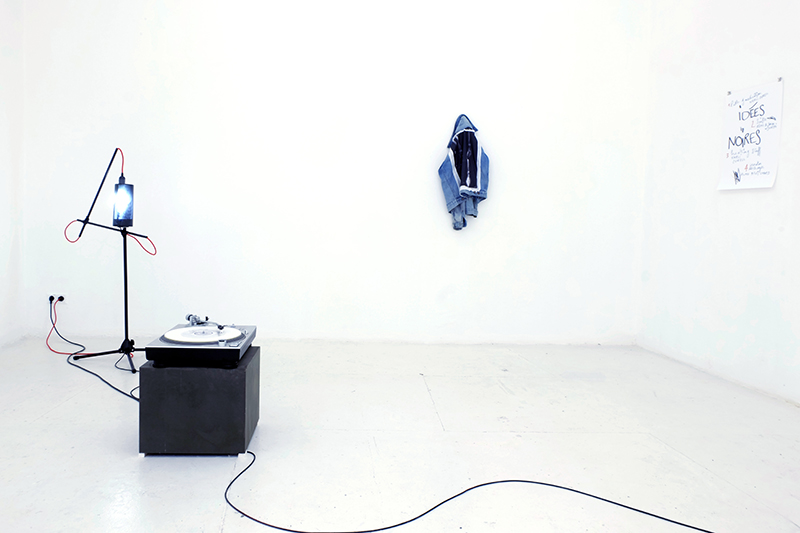 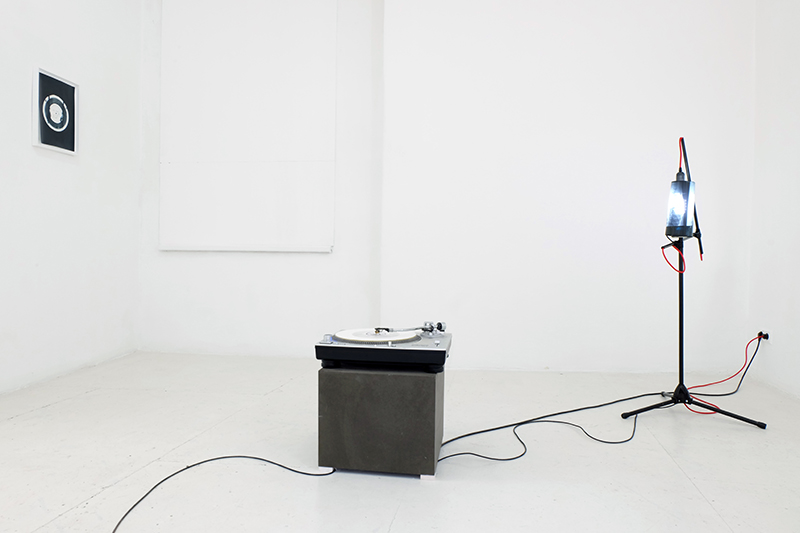 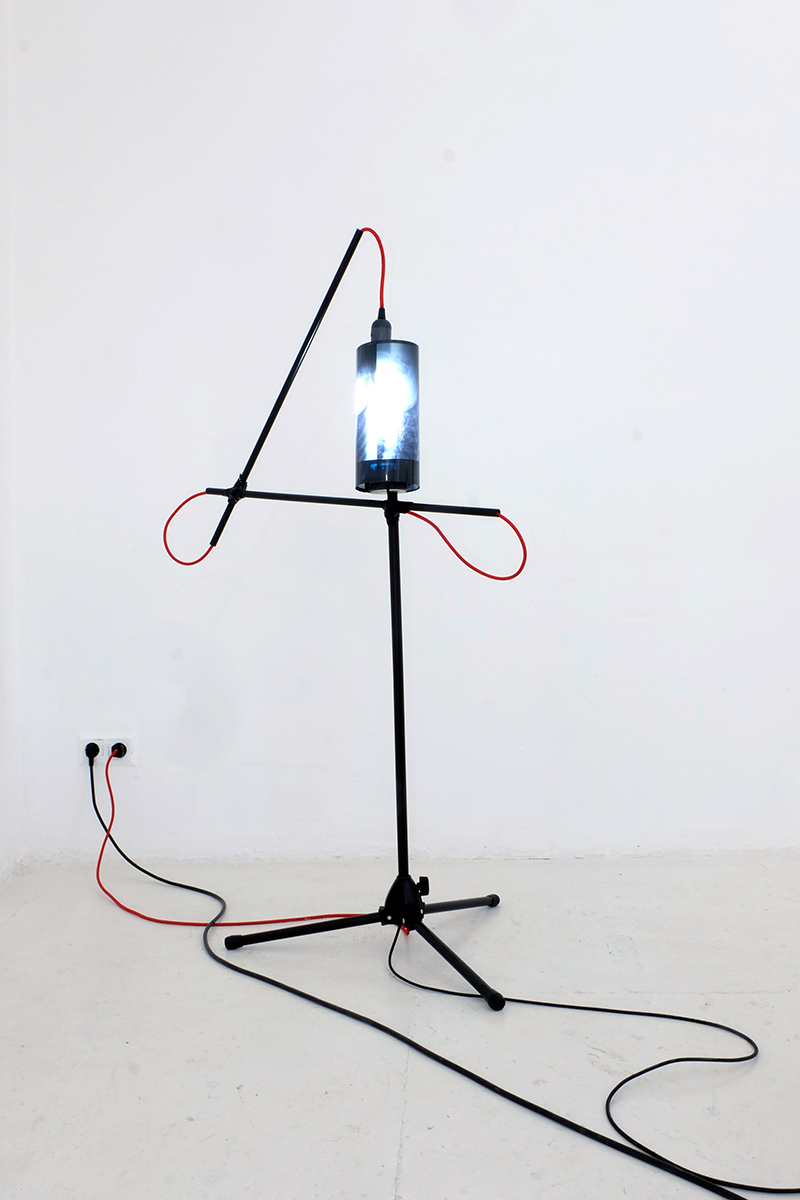 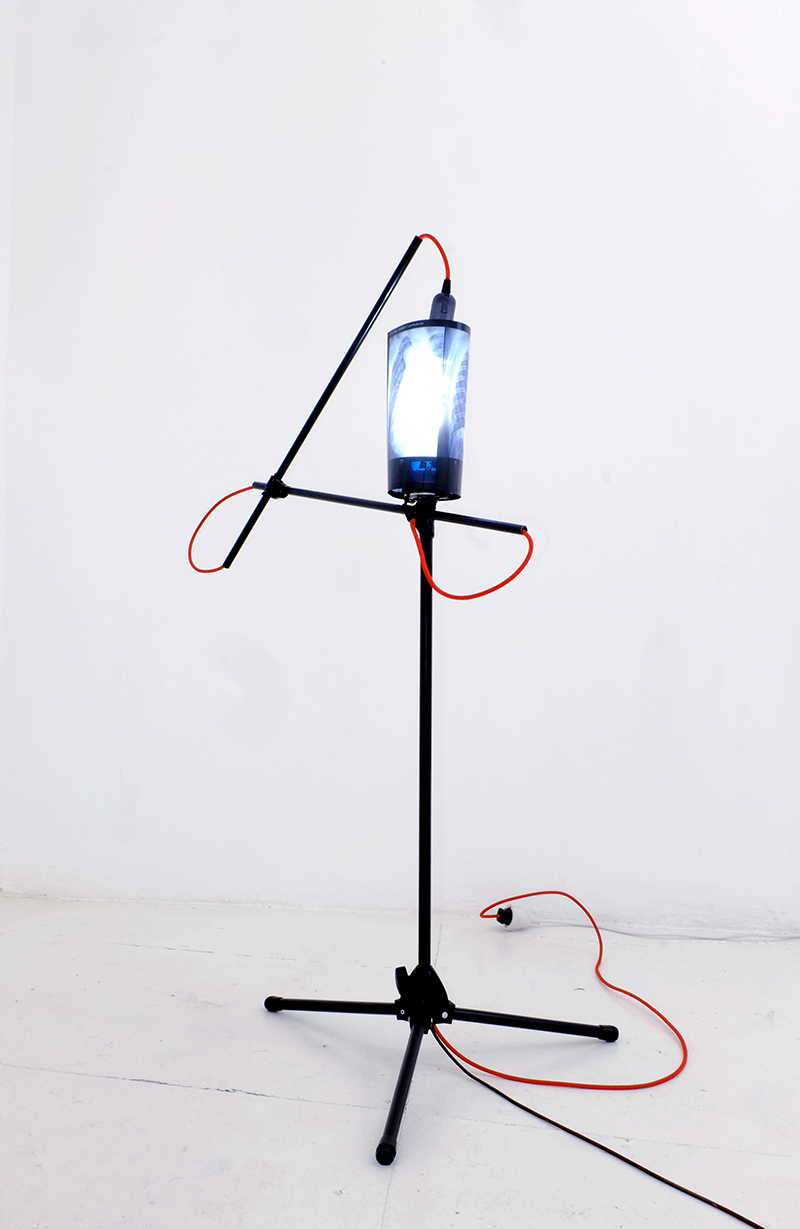 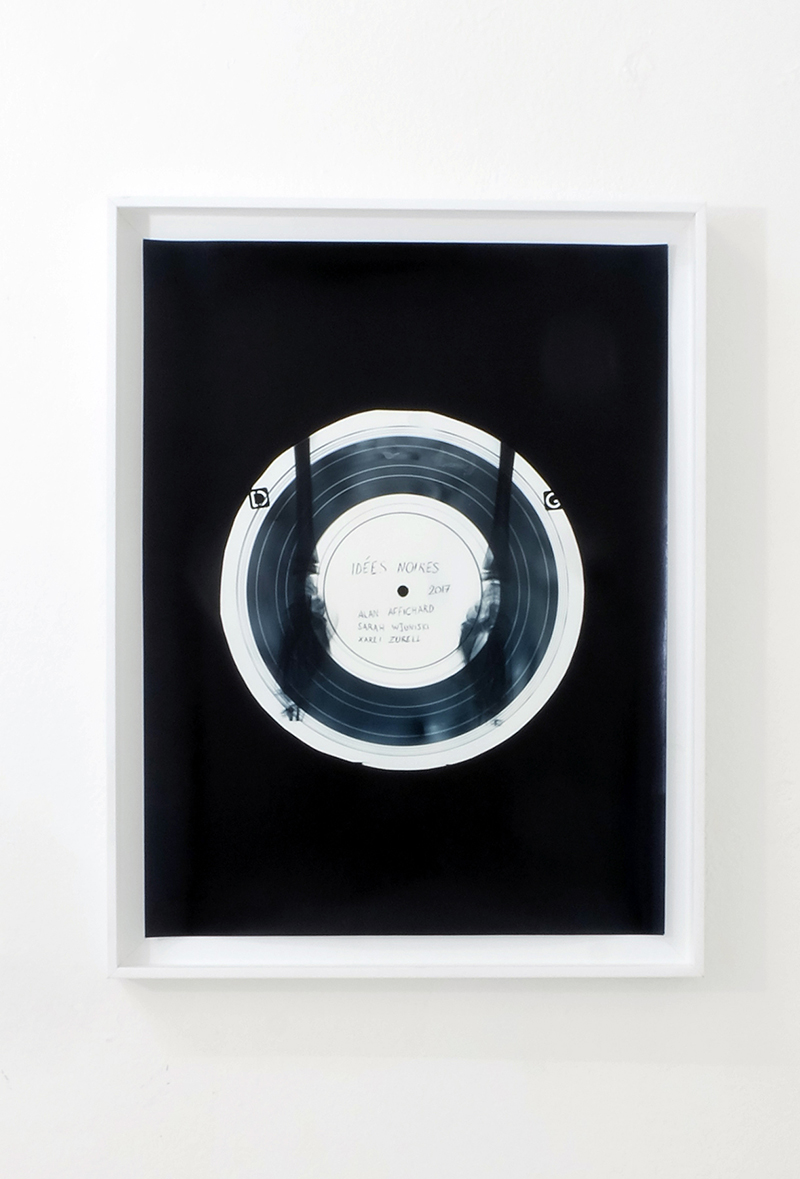 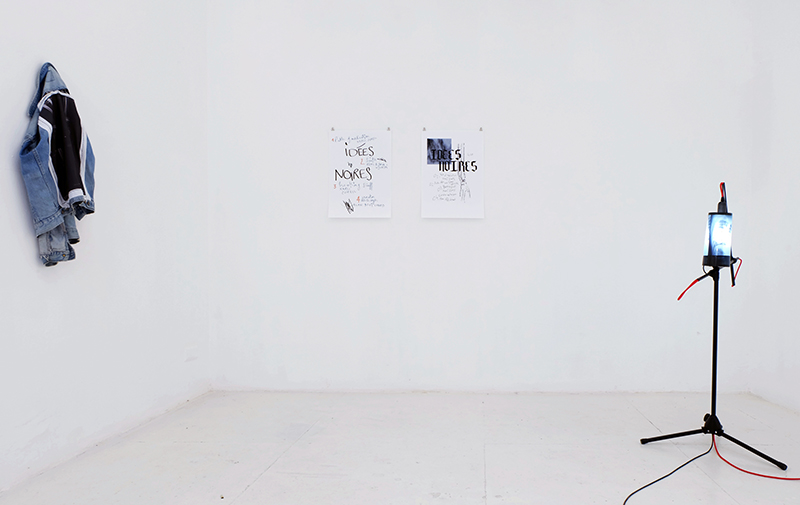 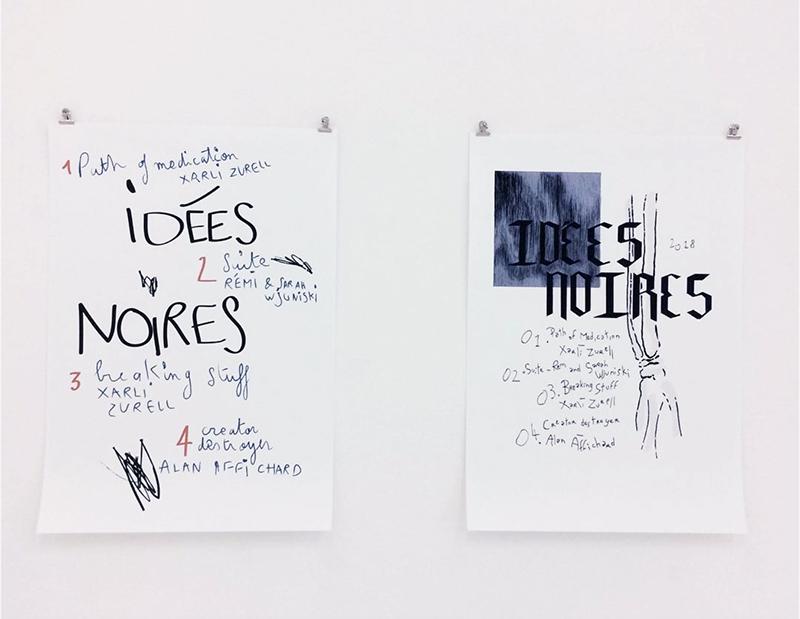 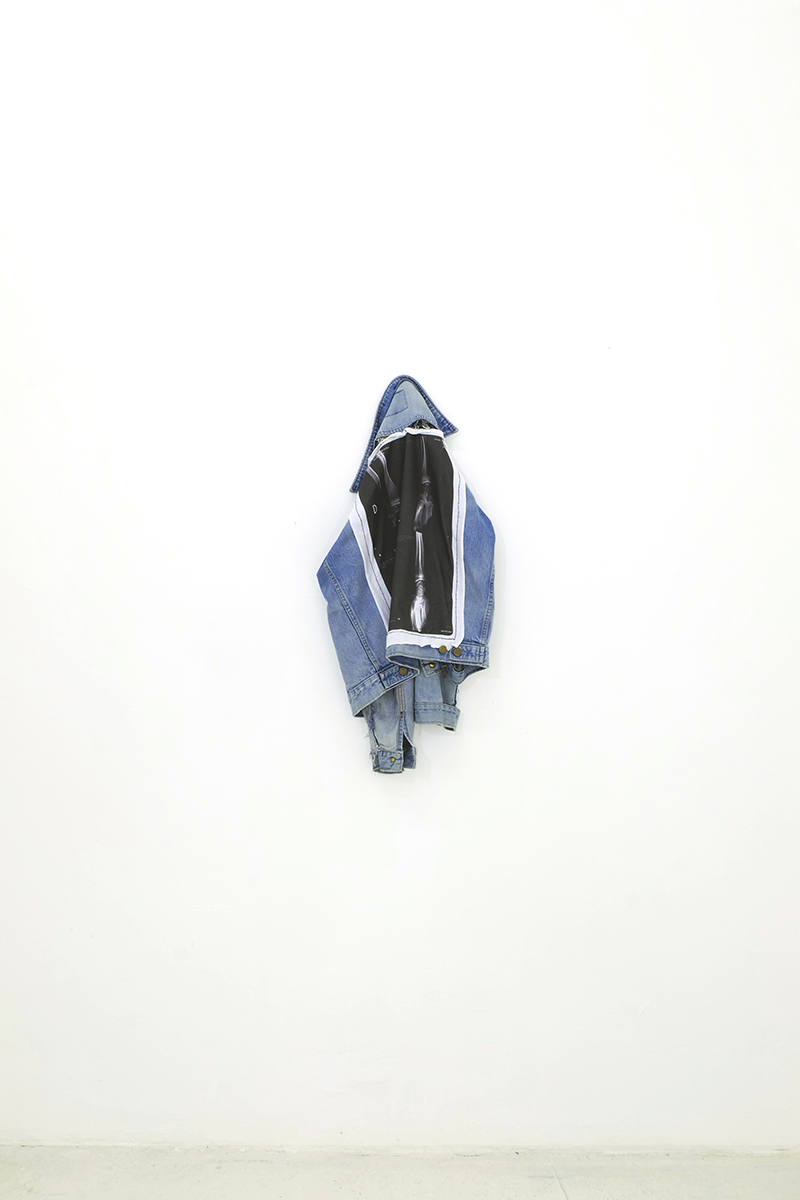 Idées Noires (« dark thoughts ») is the literal Wikipedia French translation for « Blue Devils », an expression, which originally describes the feeling of "having the blues". Therefrom, Affichard wanted to interrogate the « blues » inside each one of us and it’s expression through music. He started working with two other artists - Sarah Wjuniski and Xarli Zurell - in order to write, compose and produce four sound pieces and a poster dealing with this affect. Later on, so as to capture the movement of the musical chords used for the songs, he developed in collaboration with a hand therapist - Joanna Jourdan - a series of splints which retain the finger positions as placed on several instruments (guitar and piano).

The sound pieces were then engraved onto Affichard’s broken wrists’ x-ray plate. Also known as Records in Bones (RIBS), this engraving method was invented and used to circumvent the ban imposed by the Soviet regime, when Jazz and Rock’n Roll records were smuggled, copied and sold in the black market.
The exhibition gathers and displays these multiple processes and collaborations, playing with musical scores as a concept and object on several levels in which each work has been used to produce the next one.

Alan Affichard ( * 1989 in France) lives in Berlin. In 2016 he graduated from École Nationale Supérieure des Beaux-Arts (France). In 2017 he was a fellow of the Berlin Program for Artists and starting next September 2018, he will take part of a the research program ‘Composing / Public / Space’ led by Tarek Atoui at the Royal Institute of Art in Stockholm. His work has been shown at such venues as Between Bridge (Berlin), Ä / nun (Berlin), Les Instants Chavirés (Montreuil), Treize (Paris), Fieldwork Marfa (Marfa, Texas).
Tags Alan Affichard, Berlin, Hochparterre, Lazy exhibitions, Studio Salon
Newer Post Older Post Home