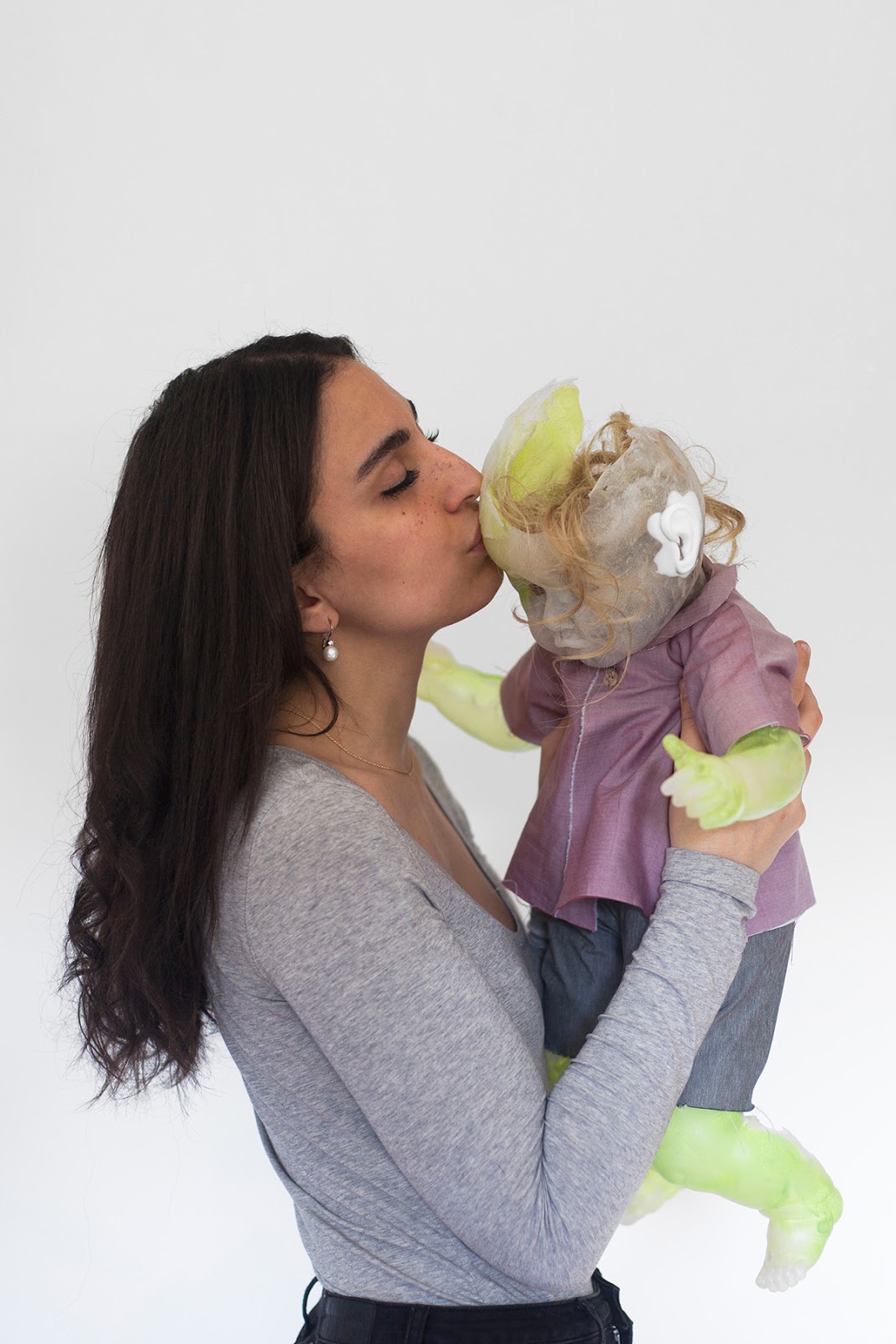 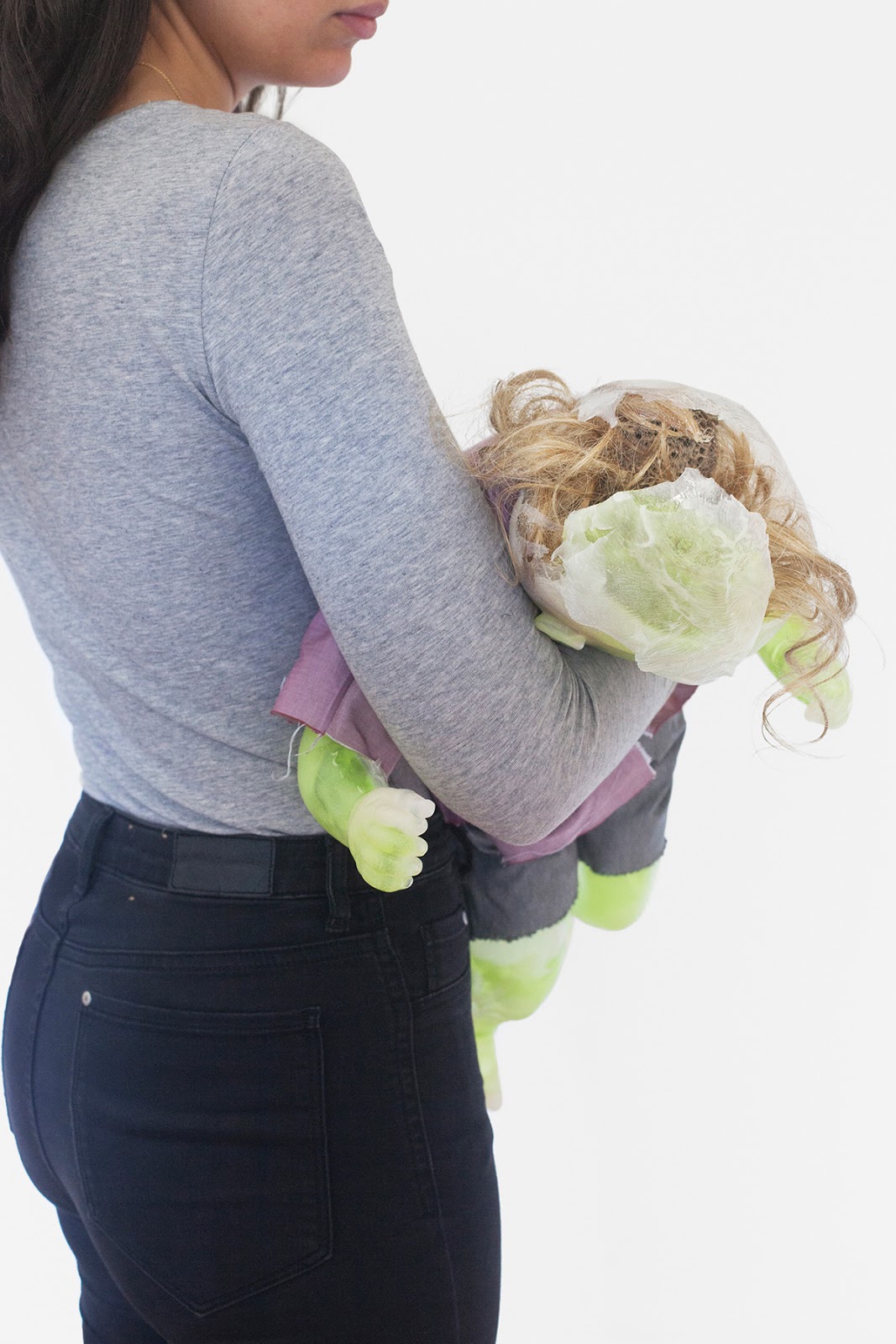 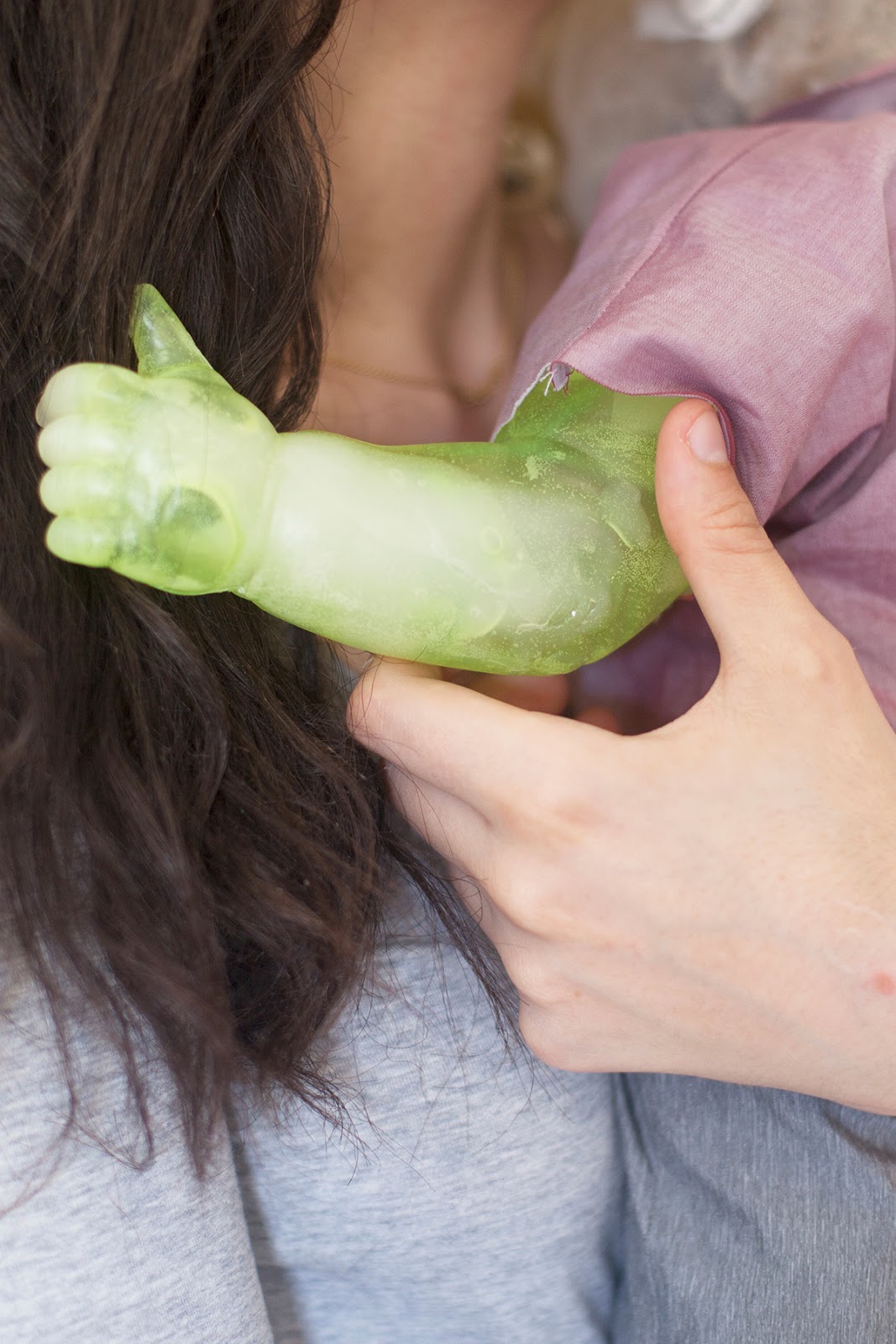 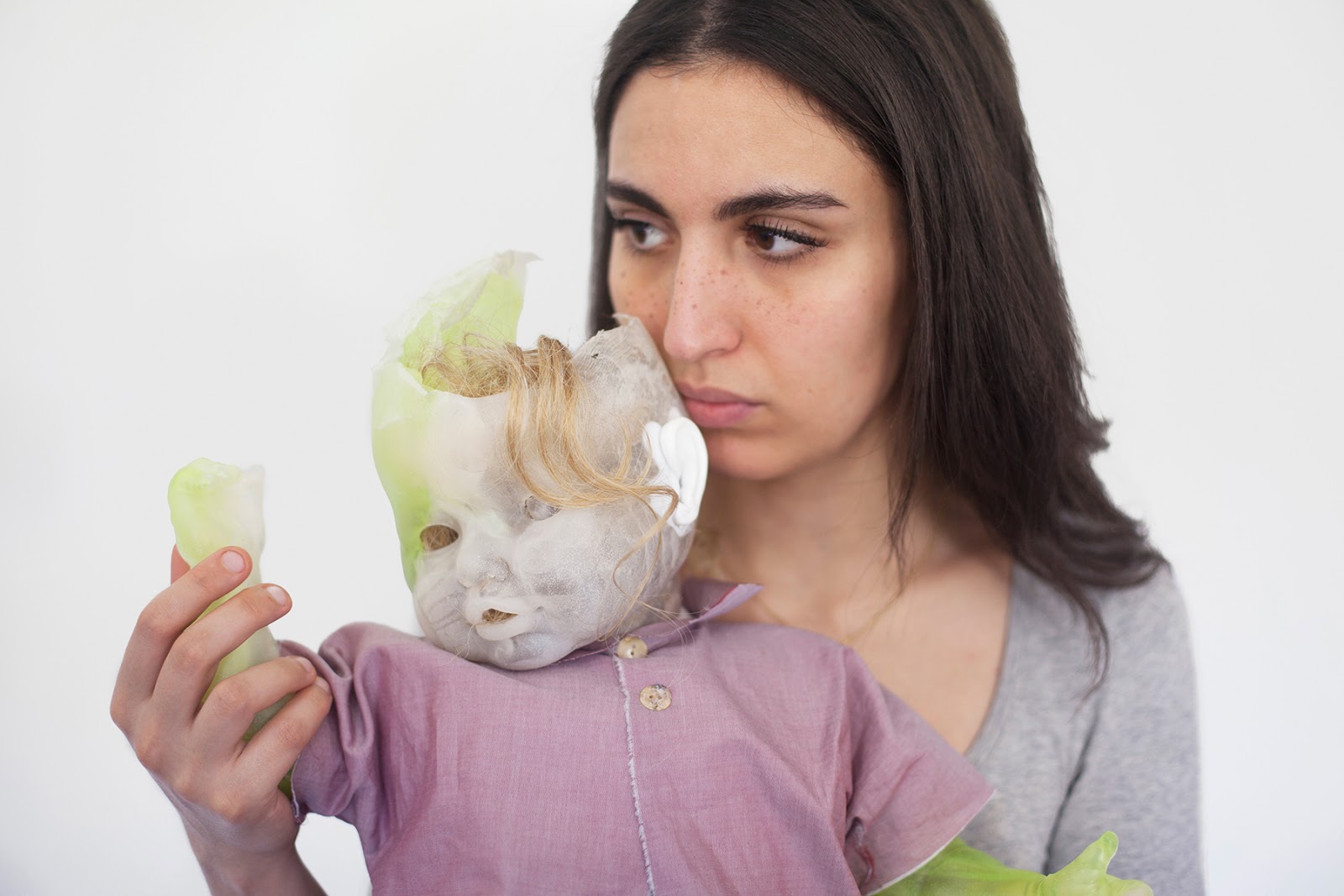 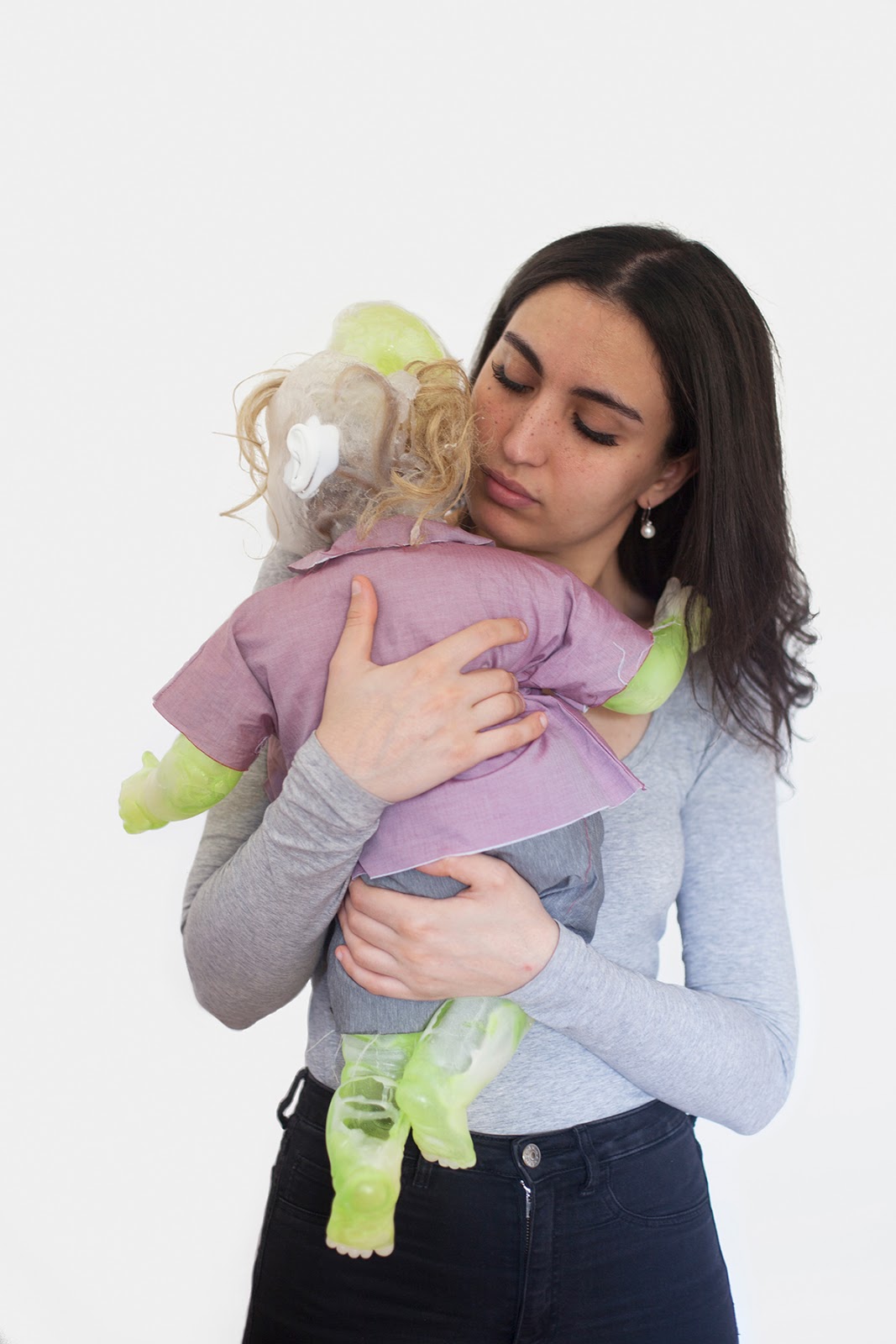 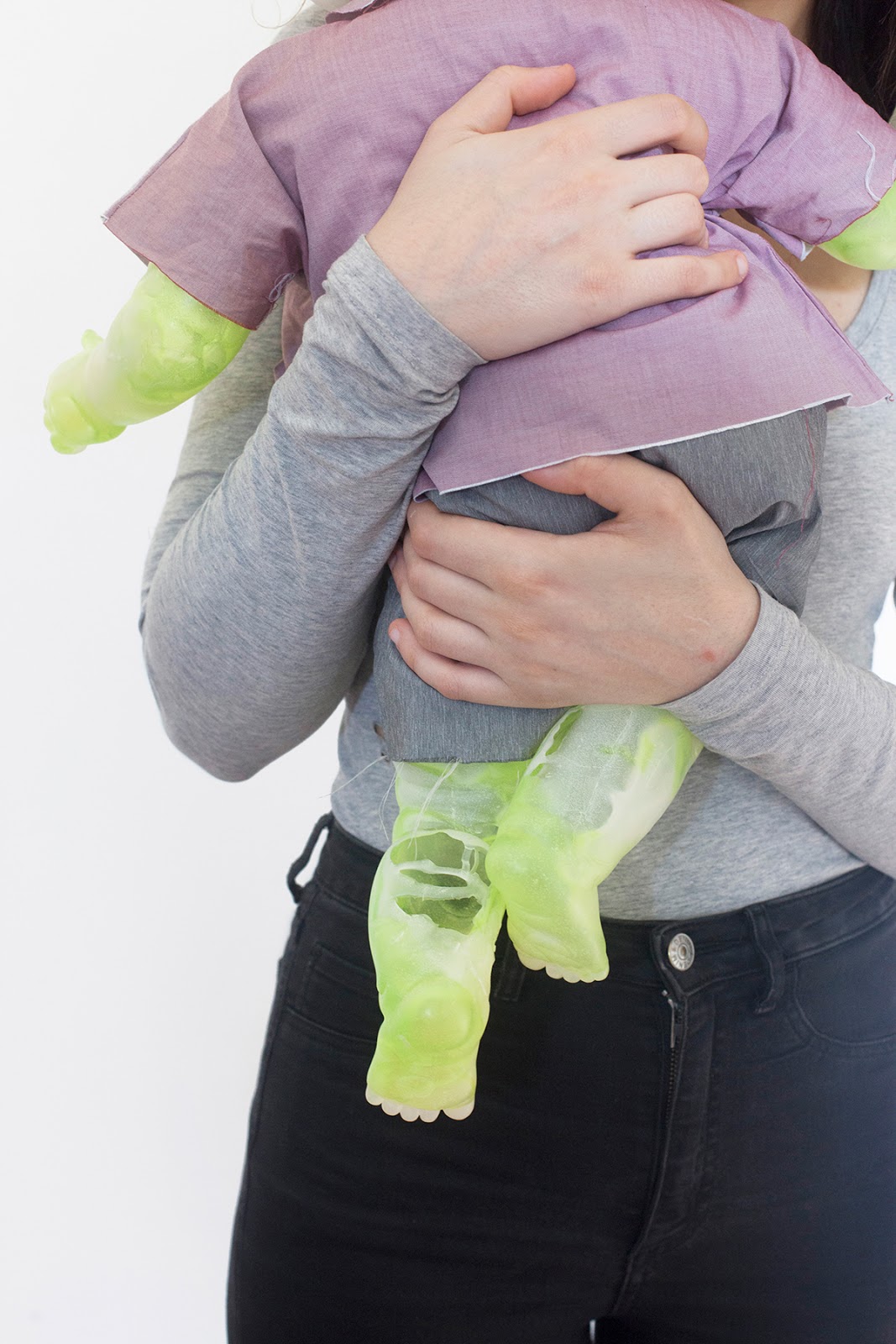 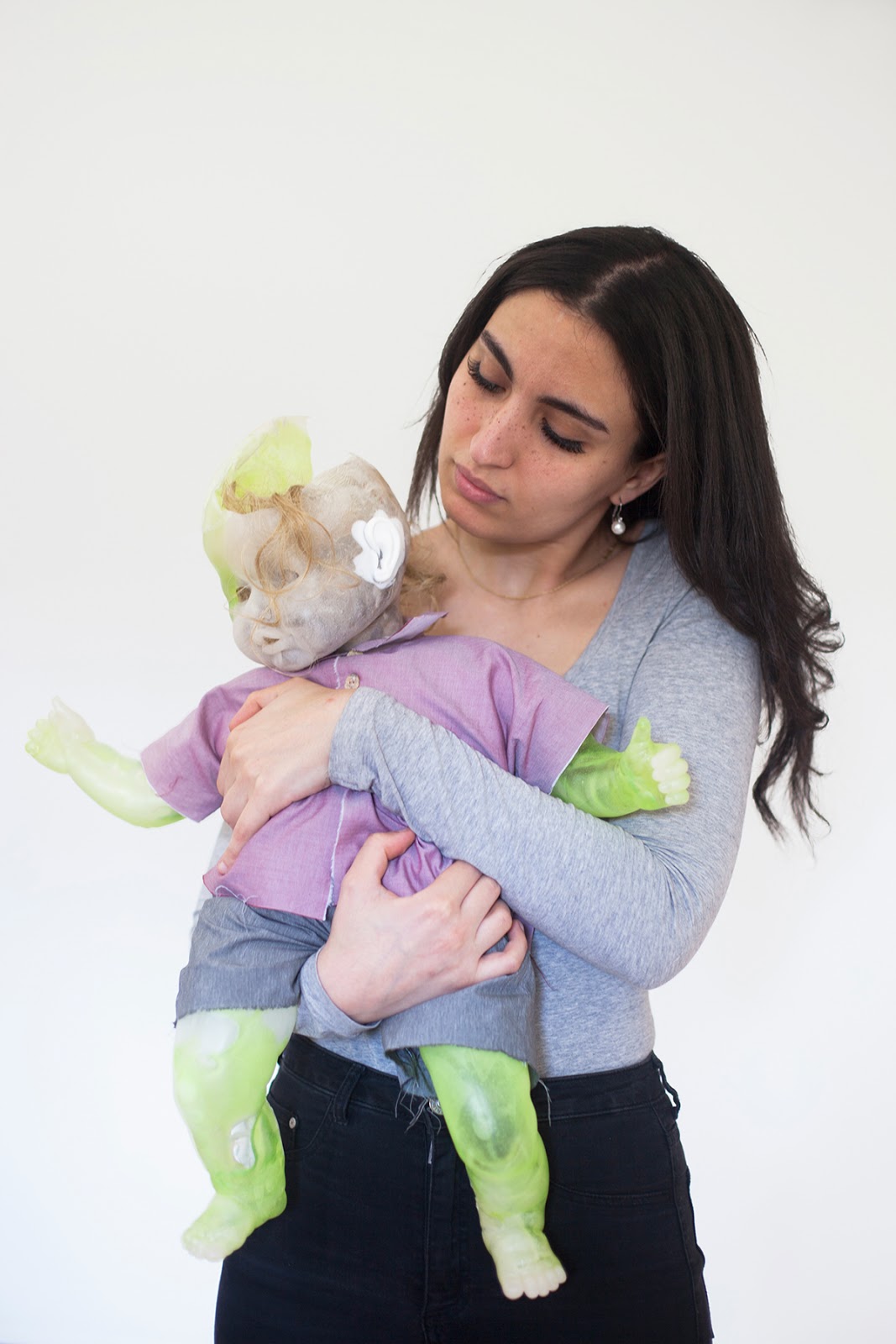 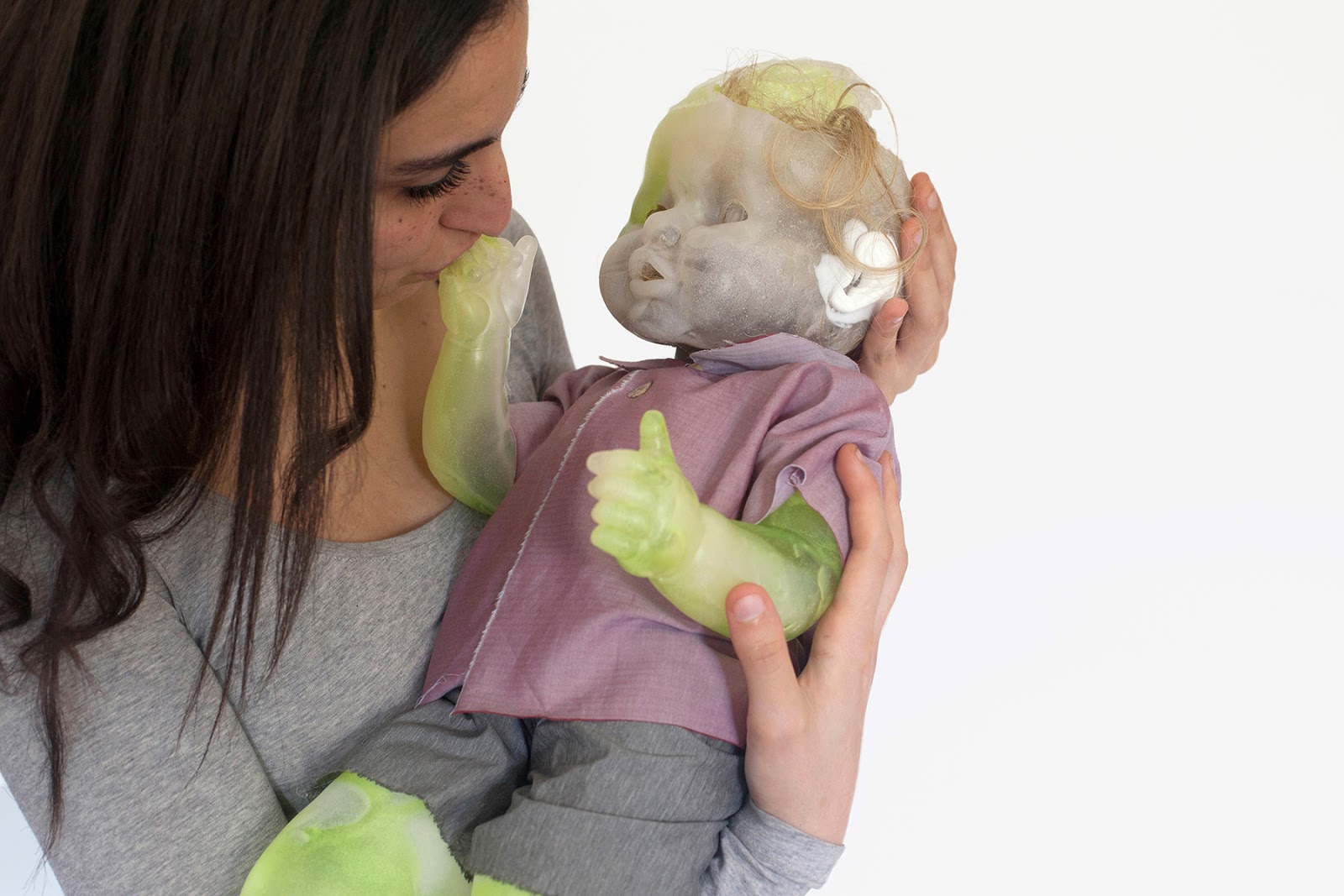 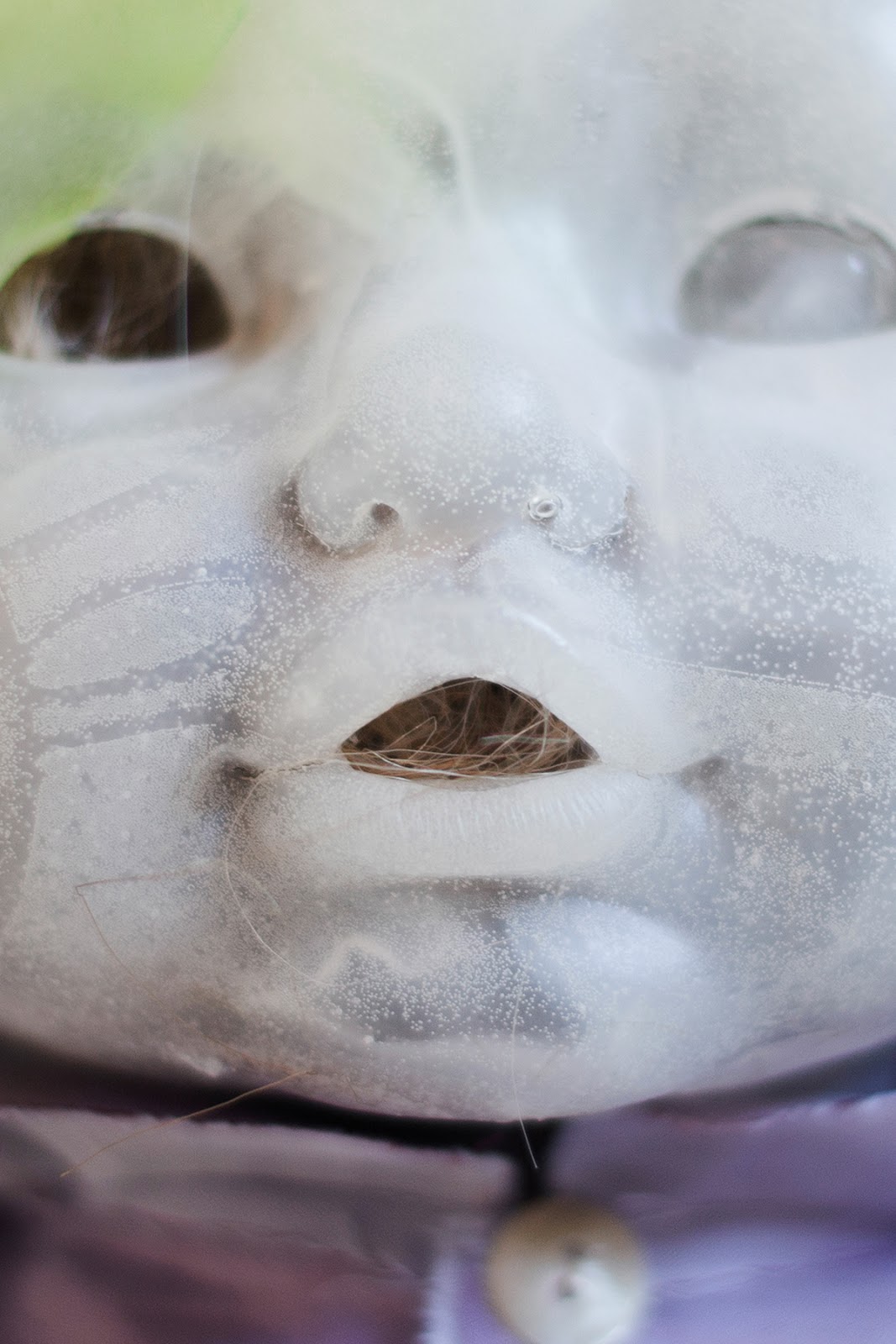 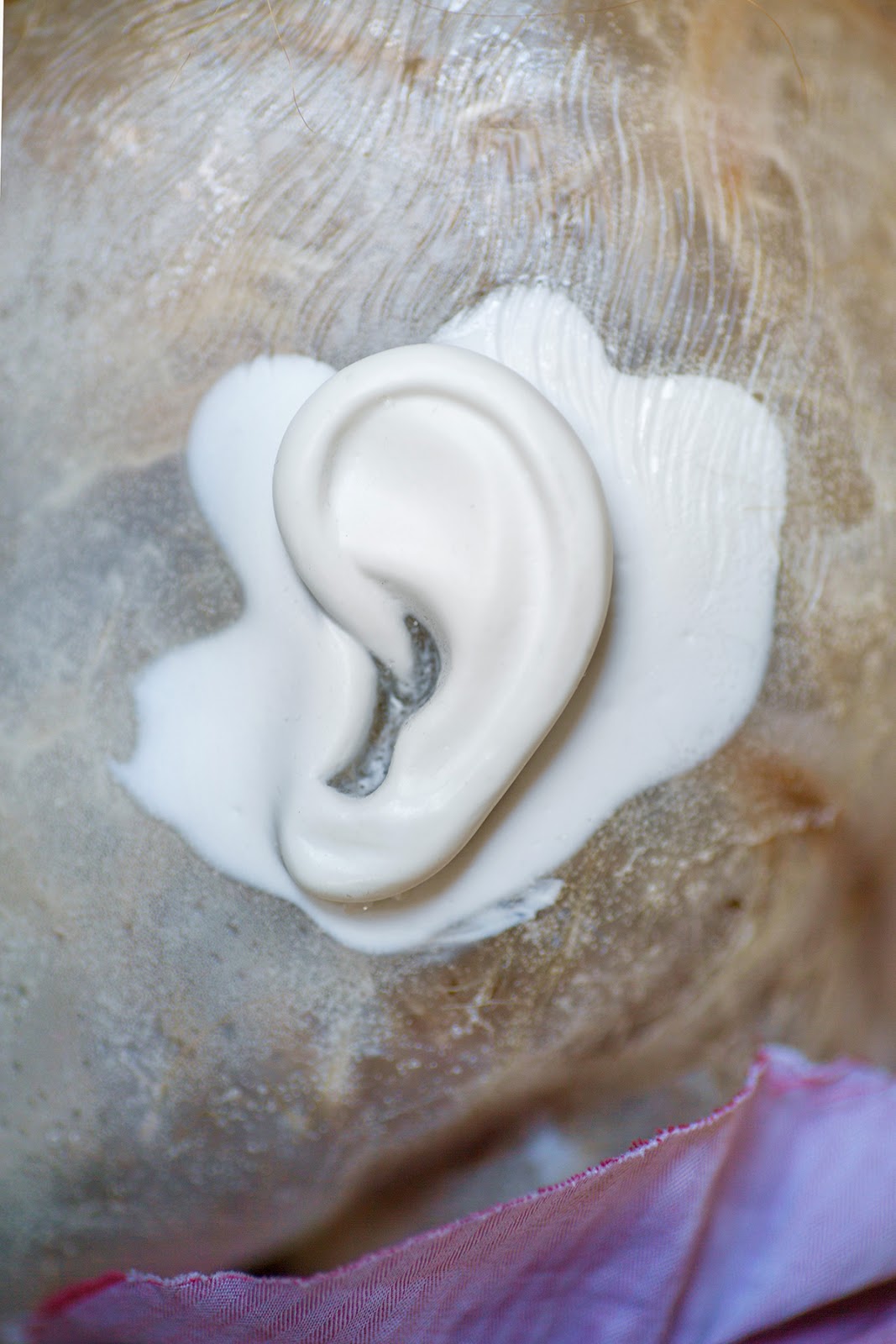 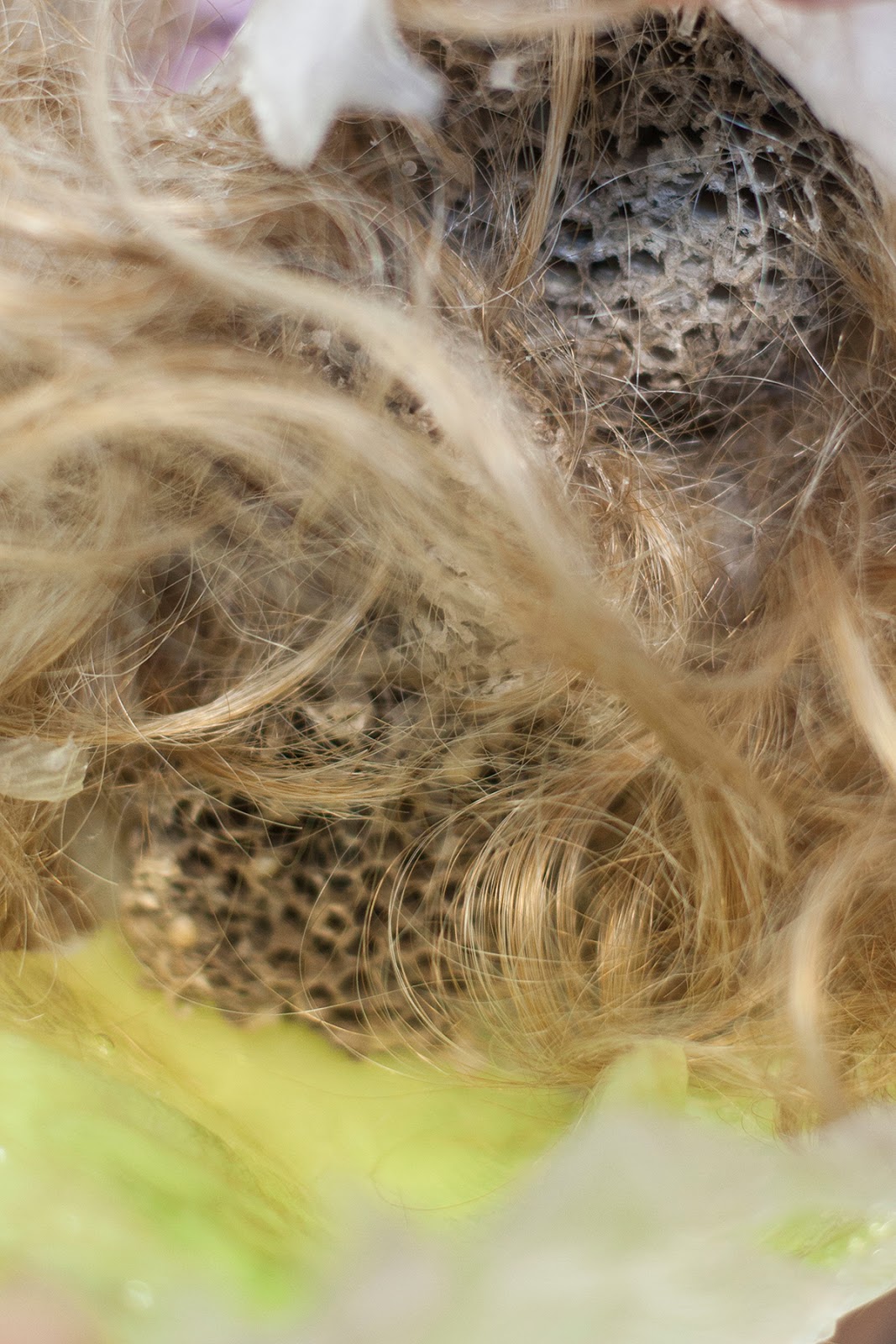 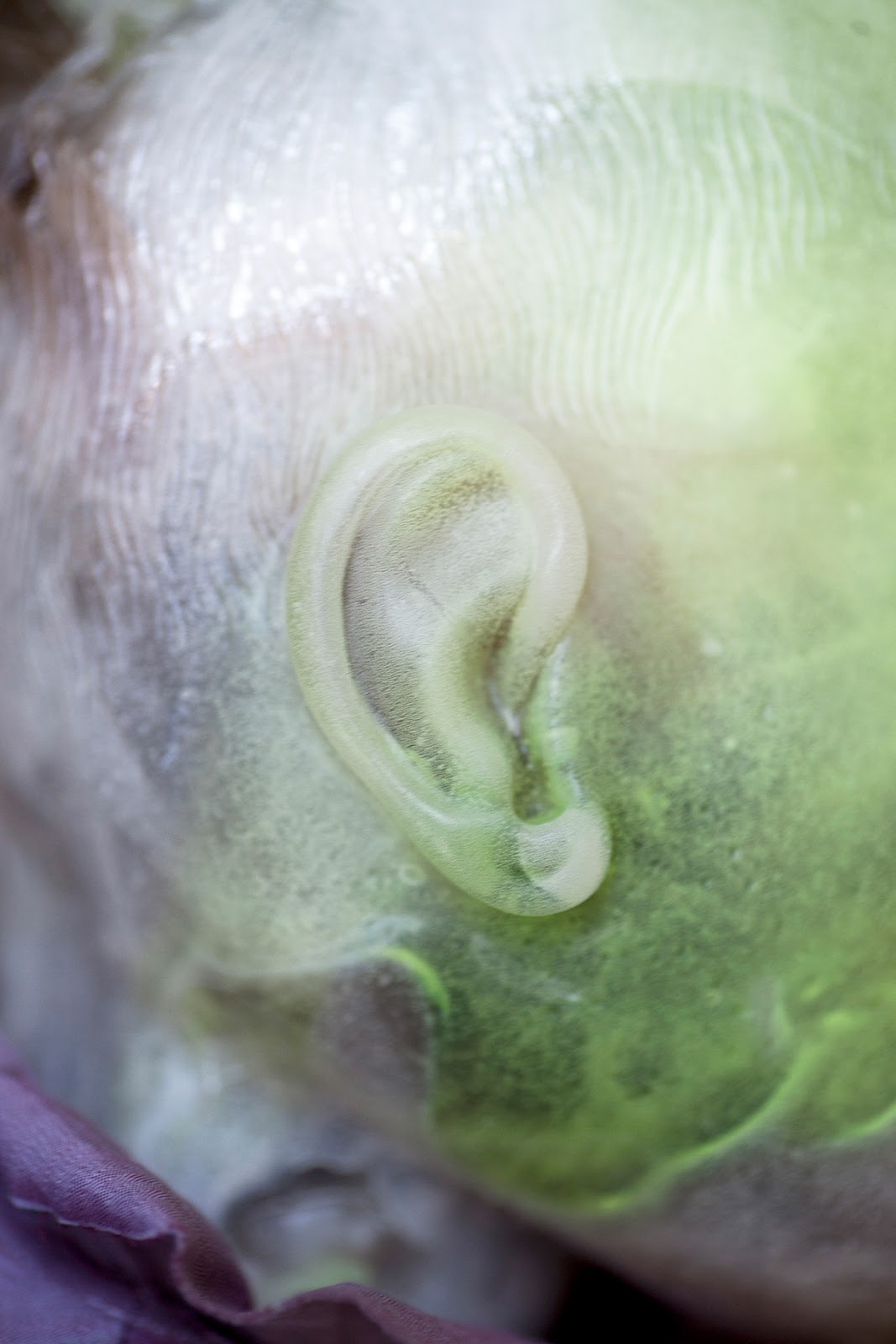 The way Leuci stages her sculpture depicts the sacred dimension society holds for both the child and the piece of art.

The bug of the virgin and the child

The set is white, aseptic, creating a unique focus for the viewer: a child with the wrong color, the wrong texture but who is however the center of the action.

We almost feel as though we are in season 2 of the Handmaid’s Tale, where Jeannine magically heels her newborn thanks to the assumed transcendental link between mother and child.
The story though is reversed in Wasps’nest, where Leuci points out in a less romantic way the ambient fantasy of motherhood which in reality she defines as injunctive.

The result is disturbing.
It produces a bug in the representation.

Leuci answers calmly but however sharply towards the weight women carry, implied by the marketing of tenderness they must hold a responsibility for -and more generally: the assumed feminine abilities of mothers/women.
Wasps’nest appears as an auto-fictional work showing the pain, uncertainty, and vulnerability of a woman: the artist expresses an intimate feeling while bringing up political and societal issues.

Not only does Leuci talk about motherhood in general, but she precisely raises the question of the artist-mother.
The holder, Monia Ben Hamouda, is asked to play the mothergame with the sculpture-baby.

Is motherhood demeaning? Enriching? Simplistic for a woman-artist? Is becoming a mother putting your career at risk?
What political dimension does she adhere to when –as an artist, and thus as a person whom any action in life, both intimate and public, has a meaning, a political weight, engaged and engaging, significant- what position does it imply to become a mother as an artist?

"And maybe we may heel" or the reconciliation of these questions

In the videos, the holder observes and contemplates the baby-artwork, carrying it, touching it, feeling it, loving it.

Leuci stages the love existing between artist and artwork and compares it to the fantasy of motherhood.
Wasps’nest, while laying out the violent dimension of motherhood, gives a space to its fantasy by displacing it with delicacy and intelligence.
Tags Curated by Lolita, Lazy exhibitions, Lucia Leuci, Paris
Newer Post Older Post Home