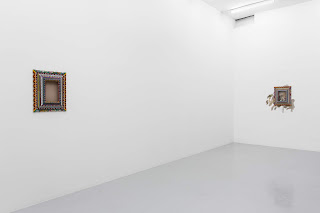 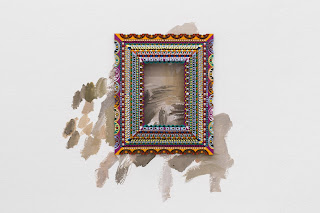 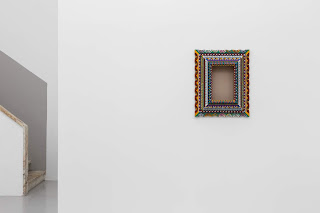 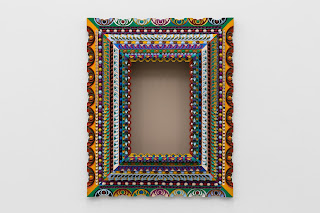 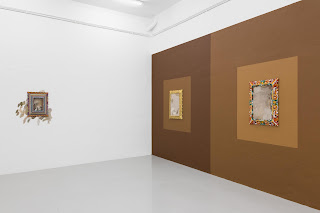 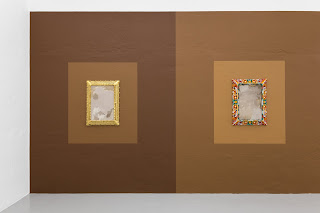 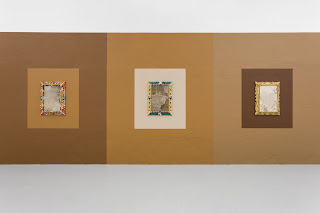 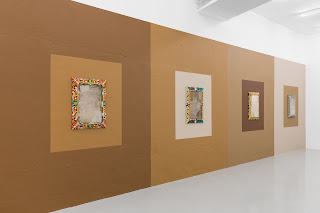 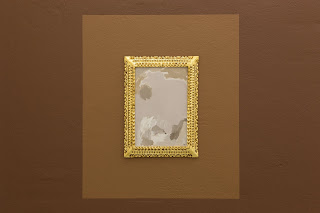 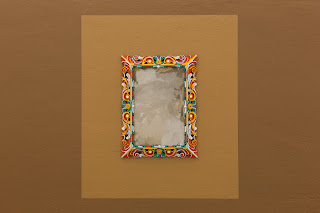 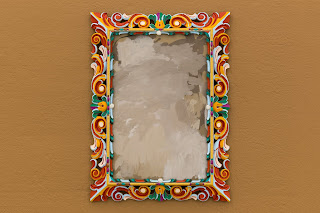 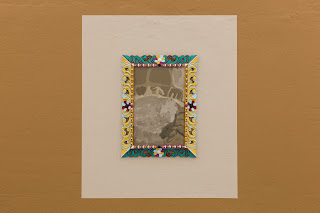 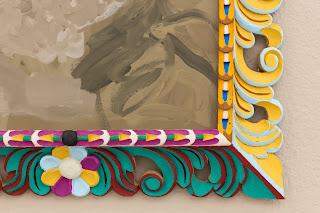 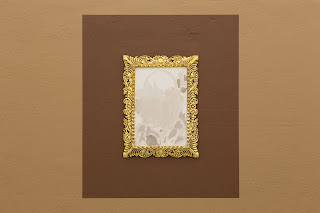 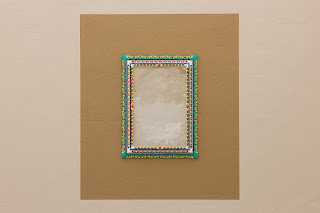 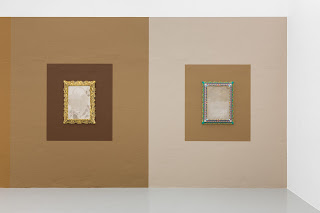 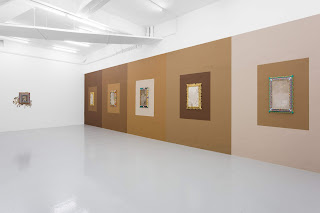 In recent years, Sol Calero has been developing a pictorial language that operates in a similar way as souvenirs do: an idealized representation of a place, concentrating multiple layers of self-projected identity. Cultural traits, traditions, landmarks, historical milestones, are all neutralized and displayed in leisurely forms for consumable purposes. The souvenir is not an object taken out of context, but an object created to encapsulate a context, and disseminate it as an abstracted interpretation. Sol Calero re-creates the context of the painting as a souvenir in her installations, in the same way identities are exported: they are at once self-performative and made up in the eyes of the outsider. The result is as much an observation of the spaces where identity is reified, as it is a demonstration of utilitarian views of otherness from positions of privilege. The use of identity as commodity has many faces, and it constantly manifests as a self-promoting or self-exculpatory strategy for political entities in the present. But it stems from depictions of the One and the Other that have a place in the classificatory undertakings resulting from early imperialist human mobilizations. These endeavors aimed to exponentially proliferate their systems in the world as a means of possession. Distribution of access, mobility, and privilege in today’s global structure are closely linked to colonial projects and their description of the world, where subjects are objectified and translated. Expansive systems are political, productive and epistemical, and they are imposed through force, inclusion, continuity, exploitation, appropriation and dependency.

For this occasion, Sol Calero looks at The Escuela Cuzqueña, or The Cusco School of painting, from Peru, as a paradigmatic precedent of exemplary and generative models that both cultivate and illustrate a view of the world at once. In Kunsthalle Lissabon, Calero presents her paintings in original, handmade wood-carved Peruvian frames from the region of Cusco, acquired during her last trip to the country. These literal souvenirs frame a new pictorial direction that adds to her emblematic signature patterns and designs, and moves on to explore the non-represented, the non-iconic. In the amalgam of shades we find the in-between, multiple, ambiguous, and muddy nature of reality. Tente en el aire (“hold yourself in midair”) is a direct reference taken from the racial taxonomy established in the colonial period in Latin America, meaning the descendant of Campulato and Cambujo, amply illustrated in the “Caste Paintings” of The Cusco School. This denomination, referring to someone literally floating between identities, incapable of claiming their roots, appears as a clear image of the chastising nature of the definition itself.

For this project, the new color palette is in itself an exploration of pigment as an example of classificatory narratives that define hierarchies, voices and positionalities. Here the subject appears in an abstraction of the portrait genre that shifts the notion of personal representation towards the narrative of collective identities and the layered nature of their construct.
Escuela Cuzqueña comprises the body of painting made in the city of Cusco during the political period named “Virreinato del Perú” between the 16th and the 19th centuries, in the hands of indigenous or mixed-race painters under the guidance of the Christian missionaries. The Viceroyalty included most of the South American continent under one legislative and spiritual regime ruled by the representative of the Spanish King in the New World, and it concentrated most political and religious activities in Cusco, where the evangelization process focused on teaching painting and writing in order to gain access to the learning of the Catholic Scriptures. European art was brought and used as a model, and both formal and symbolic elements of pre-hispanic cultures were integrated in painting as strategies of reinterpretation, appropriation, eradication, and lastly, conversion. The inclusive strategies of Christianism went from re-writing religious history of the New World in a retroactive narrative of the Truth being misinterpreted by the natives, but always there to be discovered; to maintaining indigenous rituals formally but changing their meaning, or ascribing Christian significance to pre-existing cultural symbols. This resulted in a religious syncretism that is present in all the artistic production of the time, showing a process of translation of the Other according to the new terms and interests: Inca kings are recognized in them as a legitimate monarchical and political establishment, to which the Spanish proclaim themselves as heirs in order to assure continuity of power; the social and political events of the conquest are translated in the terms of Christian mythology and its voice solidified through a new narrative – the narrative of the heroic winner.

But translation as a process happens even more evidently in the act of naming. Quickly after the first conquerors settle, racial mixture proliferates and social stratification is built on pigmentocracy. A specific genre of the School of Cusco and one of the only secular ones, the “Pinturas de Castas” or Casta Paintings, present a descending hierarchy of racial combinations in apparent costumbrist scenes, which illustrate and promote a racial taxonomy of socioeconomic equivalence. From the whitest skinned, pure Spanish-blooded being on top, the strata degenerates down: mestizo, castizo, mulato, morisco, indio, torna atrás, chino, lobo, albarazado, barcino, zambuigua, chamino, coyote, or tente en el aire are some of the convened chain of designations based on pigment-ranks. Here the act of naming creates a new reality based on the difference between terms that didn’t exist before, where biological criteria is used in an imaginary structure.


Sol Calero (b. 1982, Caracas) studied at Universidad Complutense de Madrid and Universidad de la Laguna in Tenerife. She lives and works in Berlin. A selection of her recent solo shows include Casa Isadora, Brücke Museum, Berlin (2018); Interiores, Dortmunder Kunstverein (2017) and later this year she will have solo shows at Kunstverein Düsseldorf; Galerie Crèvecoeur, Paris and ACCA, Melbourne. She was nominated for the Preis der Nationalgalerie, 2017 - Hamburger Bahnhof Museum, Berlin (2017) and the Future Generation Art Prize: PinchukArtCentre, Kiev (2017)